Skip to content
Something about throwing big bugs to willing fish gets me every time.  A good buddy of mine, Terry Kowallas invited me back to the south fork again, only this time his wife, Marcy came to fish as well.  Marcy let us know that she was not a fan of the Salmon Flies.  Sure, fishing them was just fine, but the anxiety of one possible landing near her on the boat, on us, or heaven forbid on her, was not ok.  Well before Terry had even parked the truck, a four-inch salmon fly was crawling up her leg.  With her quick-dry pants on she could not feel it, so I said “Marcy, I’m not trying to get fresh with you, ok?”  Before she could really respond, I quickly snatched the salmon fly off her and lobbed it in a bush.
“Thank you for not telling me it was on me,” she said.  I knew better than to make that silly mistake. 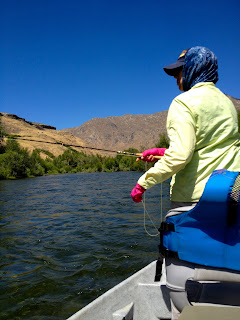 Marcy was at the front of the boat ready to cast, as, Terry took the oars and kicked off.  I was in the back of the boat, and the person in the back of the boat has a lot of responsibility.  The guy in the back can see everything, therefore must yield to the person in front, which includes casting and keeping your fly behind the oars; if you don’t, it can be considered stealing water.  Around the first bend I had already screwed up.  As Marcy was in mid-cast, I had lifted my line off the water, which had drifted passed the oars relatively quickly, catching her line and simultaneously pulling her fly and mine straight into my face.  Both flies stuck there, and I yelled, “STOP!” As the once soaring line fell, I reached up and plucked the flies from my face; only one had slightly stung the top of my nose.
“Well that’s why we de-barb the hooks” Terry said.  As we chuckled we didn’t realize that Marcy had already reeled in her line and hung up her fly.
“I’m not going to fish because I don’t want to hook you with my fly.” She said.  I smiled, “Trust me, that was my own fault.”  Now it’s true, I would say that even if it wasn’t my fault, but it definitely was, and for good reason.
The fish were rising everywhere, and both Marcy and myself had missed over ten fish.  Terry couldn’t take it anymore and we switched places.  And wouldn’t you know it, the first fish that rose to his salmon fly he nailed. 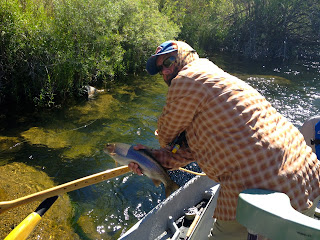 After another fish brought in by Terry, we again switched places. Marcy wanted to take a break so I took the front of the boat.  I switched my salmon fly to one with a darker wing, because it seemed the fish were a bit skeptical of the white tops.  Sure enough, after a few casts, fish on! 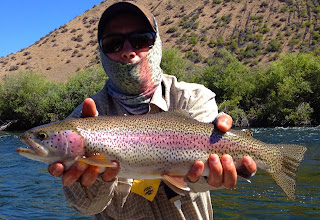 Now, Marcy was back in the game ready for her fish.  She made excellent cast after cast, and every time she looked away a fish would take.
“The fish know when you are not looking.” Terry said after the third strike with no hookup.  We finished the first float; both Terry and I brought in a few more fish, and Marcy was still left with skunk on her rod.  It was her brand new five weight Helios, and she was determined to get a fish.
“Next float, I know I’ll get a fish.  I can feel it.” she said.  We put in again and I took the oars; Marcy was perched up front ready for her fish.  Every cast I was watching her fly like a hawk, then it happened; a willing fish casually inhaled her entire fly.
“Marcy, a fish took your fly, set the hook!” Is what I was trying to say, what came out was “Fish haaaa!”
Marcy set the hook and her rod bent indicating a fish was indeed on, so I dropped the anchor.  She fought the fish as best as she could, but it was a fighter; it jumped and ran down stream, pulling so hard that the tip of Marcy’s rod was almost touching the water.  She pulled her tip up, and Terry was there right beside her, net in hand.  It was taking too long I thought, we don’t want to loose this fish.  The fish kicked hard and was running down stream.
“Terry, be ready with the net, I’m pulling up the anchor!” The boat drifted down as Marcy lifted her rod tip bringing the head of the fish above water.  Terry scooped up the fish and we all shouted in celebration.  With the skunk off her rod, and afraid to drop the fish, Marcy lifted her prize for a photo! 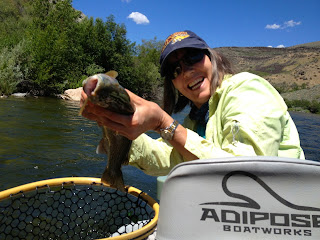 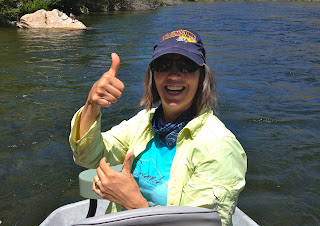 Further down the river the fish were keyed into pinks, and I loves me a good pink hatch!  We dropped anchor and extended our leaders down to 5.5X tippet.  I tied a pink on and presented it to the fish; it took.  A flash of excitement surged through my body but I didn’t set the hook.  If there is one thing I have learned over my years of exclusive dry fly fishing, it is recognizing a false take as it is more or less a last second refusal.  The fish came up, broke the water, but didn’t open its mouth.  If I would have set the hook, I could have possibly spooked the fish; I casted again with the same result; time to switch flies.  I switched to an RS2 Pink, and on the first cast BOOM, fish on!  Marcy grabbed the net, and I did my best to bring in the fish.  It was a little bigger than I thought, but I still horsed it in.  Perhaps I horsed it a little to much, because as I pulled it to the net I heard an unmistakable crack! 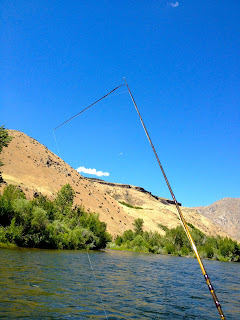 “Your rod broke” Terry pointed out.
“Oh no!” Marcy yelled.
“It’s ok, I can still bring it in!”  One last heave and Marcy netted my fish. 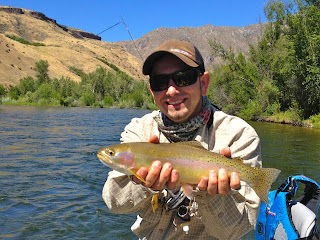 Not many people get away with breaking a rod on a fish, and are still able to land it.  Though I am happy to break a rod on a fish rather than a slammed door, I couldn’t help but feel sorry for my ten foot five weight.  Sure it is under warranty, and they will probably replace it with a new one; hopefully they will only replace the tip so that I can keep the earned residue over years of fishing stained in the cork.

2 thoughts on “Another One Bites the Dust”