Skip to content
Nice guy, Terry Kowallis invited the entire fly shop to float the river with him; he was camping up there and suggested we each take a day off to join him on the water.  With the salmon flies hatching in full force, it took little persuasion for us all to be onboard. 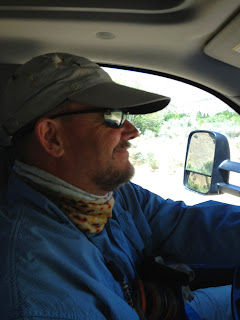 Before we had kicked off, a gentleman near the boat ramp asked if we could help him with something. We looked over to see that the back of his boat was nearly submerged, because he forgot to secure in the plugs.  This kind of thing happens to the best of us, though that did not stop us from rousing him about the situation. 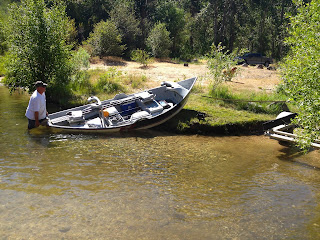 Because of our good deed of the day, great karma filled the boat; we hadn’t even left sight of the boat ramp when Terry had hooked his first fish! 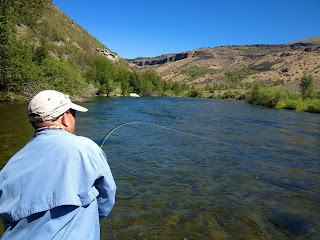 We quickly got out of the current and switched places.  Armed with the same bug, I began to cast.  Inches from the bank my salmon fly drifted as a shadow emerged from the depths.  Ever so leisurely, a rainbow sipped my salmon fly, and instantaneously I set the hook!  Boom, Boom, GONE! It was over before it started. “Did you see that?!” I yelled. Shaking my head with a smile on my face, as I continued fishing.  Not long at all, another glorious take.  My rod tip bent forward as I set the hook, then slack.
“O man… Terry, did you see that?”
“Yeah, I saw it.” he said, “Why aren’t you hooking them?” Laughter filled the boat as I casted yet again.  Another take!  What felt like forever waiting to set the hook, I fell back to an old saying, ‘God bless America’.  Saying this after a fish eats your fly gives time for the fish to securely take the fly in its mouth.  I set the hook, and the fight was on! I got one good strip of the line in before my fly came hurling towards me. Without missing a second Terry chimed in, “strike three your out!” 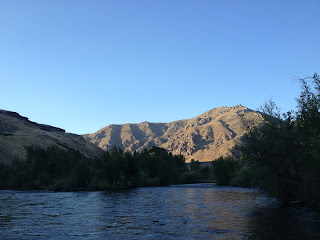 Though I had missed three strikes in a row, the confidence in the boat was still strong; after all, the fish were definitely keying into our flies, and the splashy rises meant the opportunities were still there.  Soon after Terry took the front of the boat he was on his second strike.  We both saw a splashy rise further away from the bank.  Terry dropped his fly down the path of the boat as I back rowed.  A fish came up to take his fly and, in a sudden rush if excitement, Terry yanked the fly back before the fish had a chance to take it.
“Is that strike three?” I asked.
“Nope, that was a refusal… I refused to let him eat it.  Trust me, that fish was just as disappointed as me.” Once more laughter filled the boat, and I was still behind the oars.
We rounded a corner that looked like a great place to catch a fish. I rowed, Terry into position, and with a plop of the fly a fish exploded into action.  With one of the most aggressive takes we had seen all day, Terry set the hook and brought in his fish. 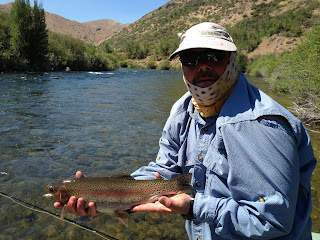 After my three missed, I was ready to redeem myself.  I jumped up to the front of the boat, and Terry kicked off.  I hadn’t been fishing for a minute when a fish slammed my fly.  I set the hook, and fish on!  It literally flew into a rage, thrashing and jumping as I fought to bring it in. My wrist was starting to fatigue as Terry netted the fish. 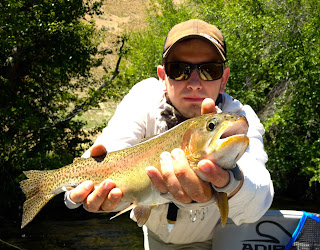 There is nothing like a good refusal!  Terry was up, and though I was on the oars I couldn’t stop watching his fly as it drifted over some fishy looking water.  As the fly floated ever so gingerly on the water, a rapid chrome flash shot up at the fly. In less than a second the wary fish looked at his fly three times and never once disturbed the water above.  Without notification, I jolted the oars bringing the boat to a 90 degree turn, rowed back, and dropped anchor in a back eddy.  Why do I take it so personal when a fish refuses a fly?
Terry kicked back in the boat as I jumped out and felt the unmistakably cold shock of the water.  It will take a little more than cold water to stop me from looking for a challenge.  I grabbed my ten foot five weight Helios and got into position to cast.  The unmistakable power of that rod gave me confidence with every cast.  Plop went my fly, and clear as day the fish refused it.  Again I casted, and again got refused.  Why is it not taking?!  I ran back to the boat to switch my fly, and yet again I got refused.  I stood glaring at the water.  I wanted some how to let the fish know I was not happy with it.  I switched my fly three more time, and received three more refusals.
“I keep getting refused, Terry!”
Terry was kicked back in the boat and replied, ”It’s kind of like being married, isn’t it?” 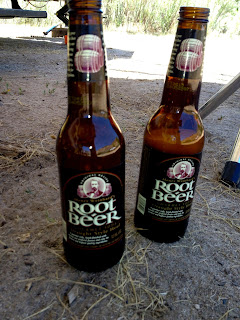 Laughing, I walked back to the boat, and out of the corner of my eye shined a glimmer of hope: a special salmon fly tied by, none other than fly tying extraordinaire and friend, Ryan Spillers.  I secured the fly to the end of my leader, and sent it accurately to its target.  WHAM!
“YEAAA!  Terry! Terry, I got it!” Deep throated laughter boomed the river as the fish leapt again and again; a predatory smile covered my face as Terry netted the fish.  After almost an hour of intense fishing, I was ready for my hero shot with the fish.  The battle was over, and I had won!  Or so I thought.  Terry was ready with the camera as I picked up the fish, just then the fish kicked hard causing me to loose grip, and leaving me with this less than desirable picture. 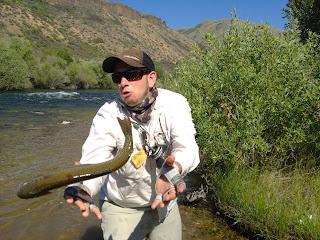 The fish hit the water swimming.
“OH NO! NO!  The water was very shallow, and the fish swam to shore almost beaching itself! My hands went around the fish to grab it, “Ahh, Help! NO!” The fish would have none of it as it slipped away impossibly fast, leaving behind blank river bottom with a single streak of mud where it had escaped.
I stood there hunched over, mouth a gape, with my arms out.  With my face dripping with water I slowly stood, regaining my fly fishers composure.  After a deep breath I thought about the last hour and realized that there was no winner or loser in this particular situation.  Simply man verses fish, and in the end, equals.
We finished off the float, and Terry ended up with another fish, and as if to mock me, his fish smiled for the camera. 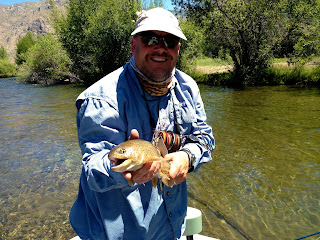