Skip to content
During work hours John asked me if I would like to fish the South Fork of the Boise with his buddy, Todd Packer.  As if he had to ask.  Well before you could say antidisestablishmentarianism, I had run home, grabbed all my gear, and was off to the South Fork with little goodbye to John. 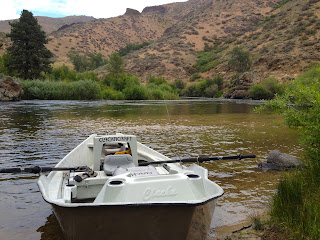 Todd Packer is a long-time friend of John’s and a Boise South Fork aficionado.  You don’t pass up an opportunity to fish with Todd, despite what everyone says about him.  The man is very serious about his fishing, and regardless of how good you think you are, he has no problem calling out your flaws that could lessen your chances of catching a fish.  Todd would call that “tough love”. 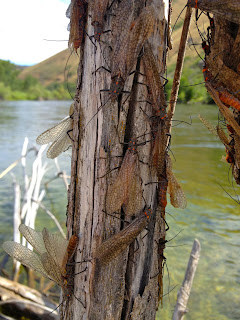 The cicadas were buzzing in the trees like 5.1 surround, and the salmon flies were everywhere. We were off, and I was first at bat.  The first back-eddy looked great as my fly landed perfectly in place.  With my fly floating I quickly noticed how many natural salmon flies were on the water; there were tons of them!  This could either be good or bad… it was bad.  We could not buy a fish. Even when Todd took the front of the boat there was not a fish in sight for hours.  The salmon flies were the safest bug on the water. Time was running out and the sun was setting, which made it very difficult to see. 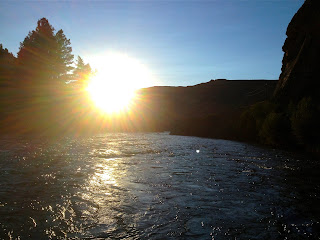 Todd took the oars as we rounded into the rock garden, signifying that the end was near.  Before we kicked off I had switched my tailing fly to a caddis, and made a quick cast upstream behind a rock.  It all happened so fast, the unmistakable disturbance of a fish rising against the current in a riffle.  My rod shot up before I even knew what had happened and I felt the all too familiar tug of a glorious fish. 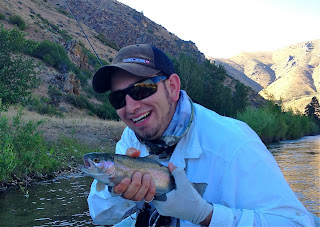 I couldn’t stop laughing as I brought in my fish.  Though it wasn’t a monster, I was very thankful to get the skunk off the boat.  Todd kicked off into the rock garden and I shot my fly in the smallest pocket, WAM!  Another fish, this time on the salmon fly! The fish was off in five seconds but there was no time to sulk. Immediately I got my head back in the game, and shot at every pocket I could find, WAM! Another fish!  Bouncing down the river I managed to bring it in, but no time for a picture.
Todd got us through the rocks with not even a bump on the boat, and was quick to take the front. With smiles and newfound confidence, it was his turn for a fish.
“C-Mon, show me some love.” Todd said as he placed his flies inches from the bank.  I could see the take out, and, Todd had yet to land a fish.  I turned to point my back towards the ramp to jet over there when a fish took his fly. BOOM! FISH ON! 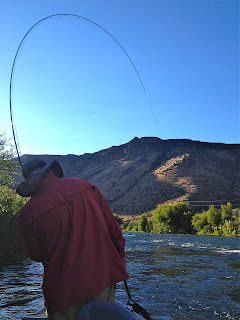 We were both happy as we took out the boat.  Todd checked the time and asked if I would be up for another quick float.  Yes I was.
We put in again not far from the take out and, Todd was first to fish.  Almost immediately he had hooked into a fish and brought it in. 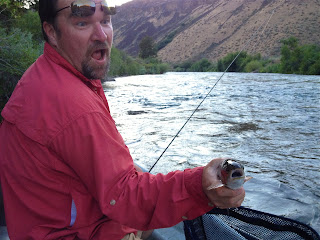 Dull and quiet quickly turned into complimenting and laughing as I was also in a fish in no time at all. 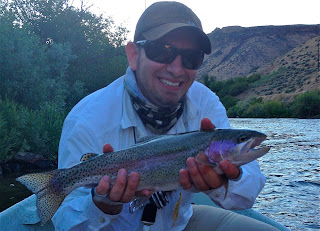 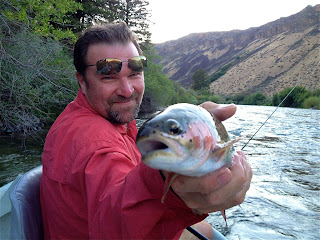 I was the last to fish as we rounded the boat ramp.  My fly was drifting nicely as another fish slurped it in.  In surge of excitement I wrenched back the rod pulling the fly right out of the fish’s mouth.
“Noooo!” I yelled as the line slack shot back at me.  My last cast was no better.  Greedy for another fish, I shot my fly in a extremely tight pocket where a branch grabbed it an kept it for itself.
In the end we made it back to the boat ramp very happy people, and drove home with very happy faces thankful for this very happy ending.