Skip to content
Once more I find myself in Terry Kowallas’s boat fishing the salmon fly hatch, and it is a-booming.  Back in the fly shop we have been hearing about how the South Fork has been a tough fishery lately.  After personally experiencing constant false takes and blatant refusals by the fish, we determined that it could actually be the fly’s fault.  I know, I know, a bad carpenter blames his tools and we tied the flies; I get it.  The thing is, the flies we tied earlier did in fact work, but don’t work so well anymore.  John, the owner of Anglers fly shop, has a theory that the fish are being skittish towards the flies with the big white tops because they catch them so often.  This would explain why I had so many refusals when I was trying to catch that fish last week; when the fish finally took, it inhaled the fly with a dark wing.  So, armed with two styles of dark winged salmon flies, fishing was glorious! 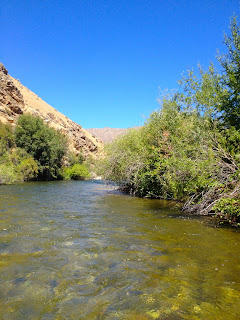 We started at the Village ramp early in the morning, and it wasn’t long at all before Terry brought in his first fish. 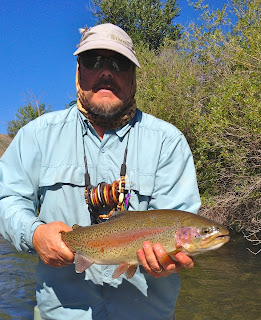 We switched spots in the boat, and it was my turn to fish; once more, a fish took the salmon fly with no hesitation. 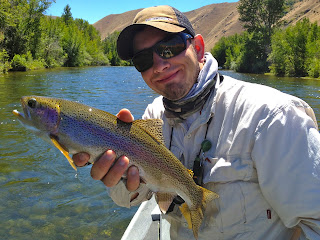 John was also there, rowing his son Nick down the river. 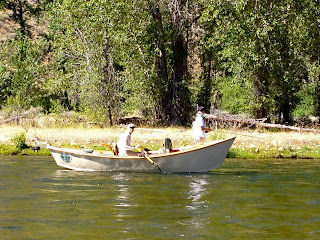 Nick was also armed with a dark winged salmon fly, but not the exact one I was using; he had the other version we came up with. As we watched them drift by, Nick placed his fly near the bank and WHAM!  Nick’s fly rod shot up and the tip of his rod danced with a fish!  Terry and I yelled with excitement to celebrate Nick’s fantastic catch.  He looked over at us with a smile that could brighten a room for days as John anchored, jumped out of the boat, and netted the fish. 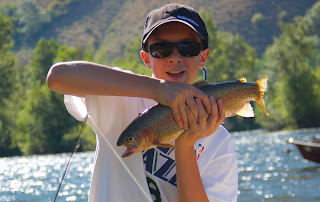 I took the oars while Terry fished.  He switched to the fly Nick was using, and in the shadows of a large bush emerged a fish.  It was a true salmon fly take, and with an aggressive splash Terry set the hook.
“I got em!” The fish exploded into action as Terry held on.  I maneuvered the boat into a better position for him to net the fish.  Lately we have been taking pictures of the fish so I can place them on my blog, but normally after netting a fish, we quickly remove the hook and quickly let it go.  Terry did just that, and it was my turn. 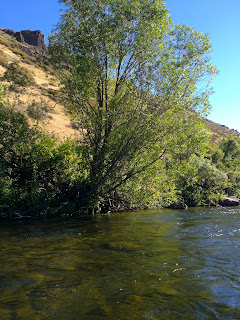 Further down the river we caught back up with John and his son Nick.  Nick was a champ, fishing ever so closely to the bank in hopes a fish would take, and one did.
“Alright, Nick!” John yelled as Terry and I look over to see Nick fighting another fish.  Smiling, I turned around and shot my fly in a tight, shaded pocket, and WHAM!
“A Double!” I yelled as my rod doubled over.
“Nick!  We could be twins.” I yelled over to him.  Not only were we both hooked into a fish, we also were wearing the same hat. 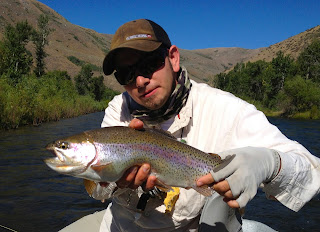 It is always nice to see friends on the river. Wendy, Bill, and Wes Atkinson were in their drift boat.  Bill had a custom wrap of a Derek DeYoungpainting put on his boat, and in the water it looked awesome. 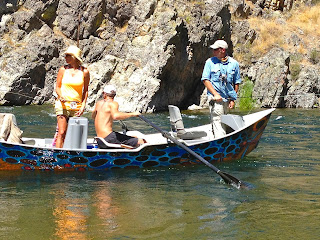 Further down the river the fish were no longer keying into salmon flies.  Instead we switched to a pink albert fly, and Terry nailed yet another fish.  Though the pink hatch was starting, I couldn’t help but throw a pico spider.  Throwing the pico from a drift boat can be difficult after all, as the fly is already hard to see.  So I tied on a more visible fly, and off the back of that fly’s hook, I tied on the pico spider; boy was that a good call!  One, two, three fish took the pico spider down the last stretch of the float.  Even I was amazed on how keyed into them they were; my fly just doesn’t disappoint. 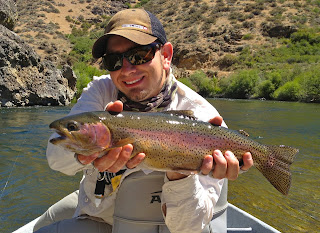 Another fantastic day on the South Fork for Terry and I, and I already want to head back.  And, as if the day couldn’t get any better, Terry bought me an ice cream shake for the drive home. 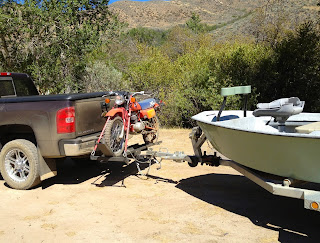