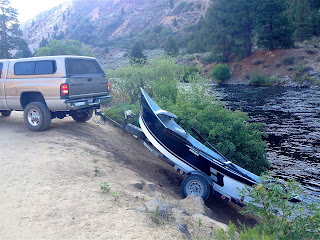 The salmon fly hatch has been fantastic this year, and I am happy to say I took complete advantage of it.  I thought last week would be my last time of the year throwing salmon flies, but Dan Williams invited me to fish the big bugs one last time; how could I say no?  The upper stretch of the river is fishing best, so we put in at the dam.  This particular spot to launch a boat is rather shady, but that wasn’t going to stop us.

The fish were not as active as last week, but there were a few fish that were willing to look up.  Being a sporting chap, Dan let me fish first.  I accidentally left my ten foot five weight Helios behind and ended up using my five weight Superfine Touch.  I can tell you are feeling sorry for me… Though it is a slow action rod, I’m always amazed at the power it offers.  If you get the timing down, your fly line will have that really nice tight ark to it and turn over ever so gently; even with a salmon fly at the end.  A fish came up and sipped my fly, and I ended up bringing this healthy specimen to the boat.  It was now Dan’s turn to fish. 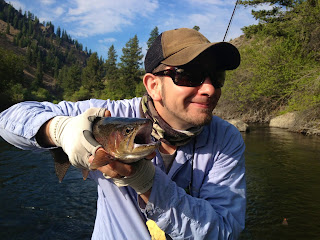 Thinking back to when I was first working at the fly shop, Dan was the first person whose name I remembered because he has the same name as my father-in-law.  I told this to Dan and he replied, “Your father in-law must be a heck of a guy!”

Now Dan was at the front of the boat, casting his salmon fly to every bit of pocket water.  In a flash, a fish came up to look at his fly. A large boil of water surrounded the fly created by the fish’s refusal.  Dan’s entire body jolted, but his hands stayed down and his fly remained undisturbed.
“That fish lost the bet.” Dan said.
“He bet the other fish that he could make this idiot pull back his fly.  Well he was wrong!” We both laughed as, Dan continued fishing.  We were nearing the takeout for our first float, and though he had hooked into a few fish, none were brought to the boat.  I kicked the boat around to pull into the take out, but just before I did so, Dan made a cast.  SPLASH! A fish took his fly right at the take out.
“YEAH!” I yelled, “Look at you, Dan, catching a fish right at the last second for dramatic affect.” 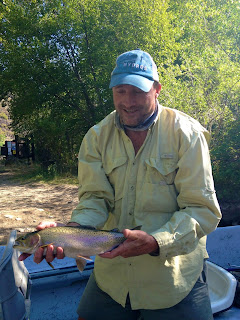 Our next two floats treated us well.  There were still fish willing to take salmon flies, and we were happy to present them.  Even when we went through a slow stretch where there were no fish eating, we found ourselves talking to the fish.
“Come on fish… Helpless salmon fly floating in the water! A tasty morsel waiting to be eaten!”  Most of the time that did not provoke the fish, but when one did take the commentary continued, “How dare you fish!  Picking on this poor defenseless salmon fly.”
This was a good sized fish, and the pictures never do them justice; just like this fish below that wouldn’t stop squirming for a decent picture. 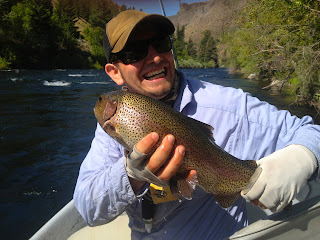 During our last float, Dan felt something crawling in his shirt.  He whacked at it while fishing, and felt a bit of a sting like something had bit him.
“That must have been a heck of an ant.” He said as he continued to fish.  Our float was coming to and end, but not before Dan was able to catch a few smaller fish, and another nice sized fish with brilliant colors. 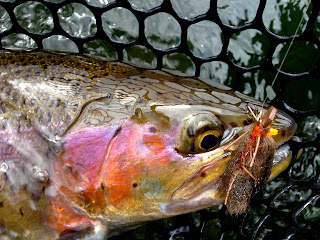 I biked up and grabbed the truck, and when I got back Dan asked, “Remember when I said that the bite felt like a sting?”
“Yeah,” I said.  He held up a hornet that ended up in his shorts. “Whoa! How did it end up in your shorts?”
“I have no idea, but I’m glad its out.” I would have to agree. 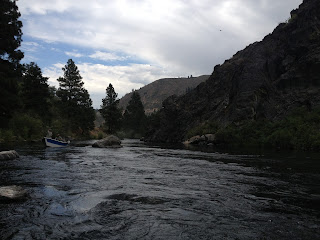 The temperature is definitely cooling down at the South Fork, especially in the mornings.  When we first stepped out of the truck there was a definite crispness to the air that morning, and on our last float it was noticeably warmer.  I personally like the cool mornings that the South Fork has to offer, the smell and feel of the air offers a secure feeling, like this is home.

3 thoughts on “A Good End to the Salmon Fly Hatch”