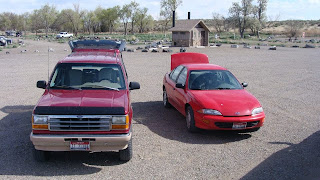 Just the other day I was rear-ended at a stop sign while heading to Outcast to pick up a float tube.  I am okay; however, my car is not, which is very sad considering I have had this car since high school.  With over 240,000 miles, this car and I have been through a lot.  I have even had Phil Rowley and Jeff Currier in my car, and Hank Patterson has leaned on my car for support.  Above is a picture of Jeff Currier’s car next to mine. 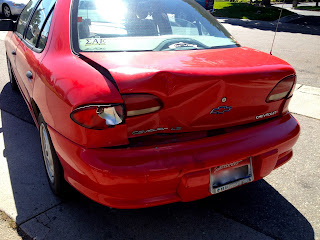 The guy who hit me was very nice and apologetic.  We chatted for a while before the officer had arrived.  He mentioned going fishing, and I was quick to give some advice.  When he asked what bait he should use is when I was at a loss of what to advise.  I explained that I was a fly fisher, and I am clueless when it comes to conventional fishing.  We spoke a bit more about fly fishing, before he asked, “How much did your fly rods cost?”
“I am lucky”, I said, “Most of my expensive fly rods have been gifts, like my Helios 2, Helios, and Superfine Touch.”  He continued looking at me, waiting for me to answer his question. “They retail for around $400 to $800.”
“Whoa!” he said, then immediately looked at my smashed in trunk with wide eyes, and said, “Those rods aren’t in your car are they?!”
Chuckling, I confirmed they were not. 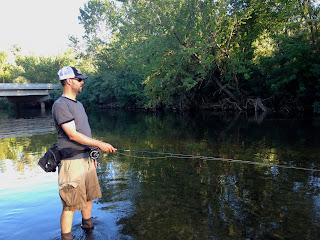 I still had plans to go fishing with my buddy Travis Swartz that evening, and I wasn’t going to be a no-show.  His buddy Dan is a beginner fly fisher, and he was there to hopefully catch his first fish on a fly.  I also had the chance to meet Jennifer Swartz, Travis’s much better half.  Together we fished the Boise River at a “secret spot” Travis recommended… Linder Bridge.  Arriving there brought me back to my first years of fly fishing, and it was certainly no secret.  I taught my brother Kris how to nymph fish there a long time ago, and since then he has caught fish with me on Silver Creek.  Kris has certainly come a long way since the days of Linder Bridge. 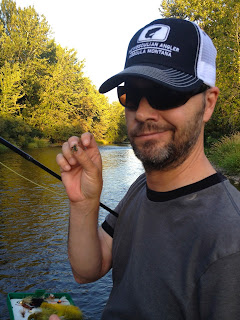 Travis and I walked the river, looking for a decent rise.  Travis, looking through his fly box, came across one particular fly.
“Hey, would you lookie here” he said matter-of-factly, holding up a Pico Spider.
“Yep… just in case” he said with a sigh as he tucked it back in place.  Caddis was the fly of the evening, and both Dan and Travis were casting away at every bit of water.  The fish were nailing their flies on every cast, but they couldn’t hook one.  The fish were about the size of your index finger, and when Dan did hook one, no matter how close he held it to the camera, it still looked like a small fish.  But, what the fish lacked for in size, it made up for in a lasting memory, for it was Dan’s first fish on a fly. 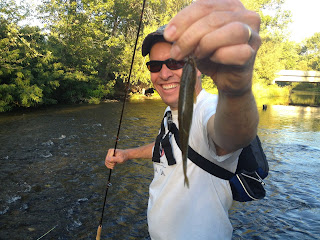 Travis switched to a streamer in search of the “big one”. Casting and blasting his minnow in every pocket, a fish turned out of nowhere and nailed his streamer.
“Did you see that?” Travis yelled. He set the hook and brought in this pike minnow that he proudly held up for the camera. 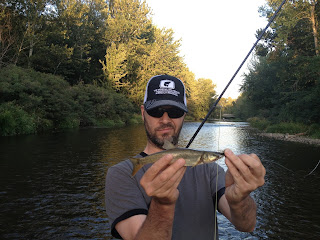 I had yet to make a single cast to a fish I thought would be worth throwing to.
“Geez, you are a snob.  I didn’t know you were such a snob, Erik.” Travis said, as I stood there waiting for particular type of rise.
“I am waiting for a trout to rise” I said.  It is hard to explain the difference between a particular type of fish and how they rise.  Over time I have been able to pick out a trout rising by the sound they make when taking a fly, and the type of disturbance on the water that is left behind when they feed.  It wasn’t long before I heard what I was waiting to hear, pulled out my rod, and presented my fly.  Whack!  I set the hook on a small rainbow trout that I brought to the net.
“Really, one cast?” Travis said.  To push the snobery a bit further I replied, “How many casts did you want me to make to this fish?”

Now I must admit, that was a snob thing to say. 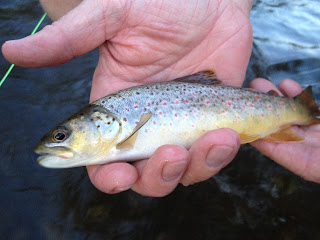 Dan joined us, and I explained nymphing to him in the very spot I had taught my brother years ago.  He caught on quick, and proceeded to bring in a number of small white fish. 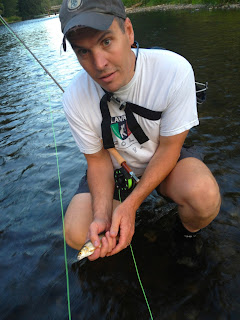 We gathered up at the end of the evening and chatted for a while before we all headed home.  Dan and Travis discussed ideas for the next Hank Patterson video.  As they spoke, I thought back to the days of old when I had started fly fishing this spot; I still remember the people who first helped me get into fly fishing, and I am happy that I am now at a point where I can help good people like Dan enjoy the sport as much as I do.