Skip to content
I have always wanted to fish an alpine lake near McCall, Idaho, especially after reading Roger Philips book, “Hiking & Angling in McCall Idaho…”.  So when Mike McLean invited me to fish Hum Lake with him, of course I said yes.  I arrived at his house the evening before the hike, and there were deer all around.  His wife, Kerri, has bird feeders around the house, including a hummingbird feeder.  A few hummingbirds were swarming around looking for the feeder which was taken down, because of a bear that had been knocking their bird feeders down at night.  There is also a fox that hangs around the neighborhood that is fed by the neighbors.  I was invited to feed the fox, and leapt at the opportunity, but the fox was nowhere to be found.  Mike’s dog, Sadie, had scared it off into hiding; though the dog did not stop the deer from poking around the wood pile. 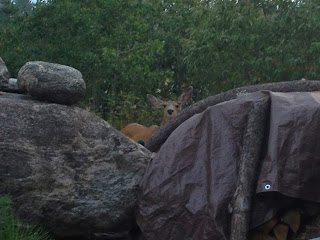 Mike wanted me to see the country at sunrise, so we woke early and headed off to the trailhead.  On the way Mike stopped to show me the granite rock people climb near McCall.  As he explained the route up the cliff, I remembered that he was one of the first people to climb the big rock in Yosemite National Park.  In fact, Mike was the first to climb one particular crack in that rock, and because he was the first, he named it Uncle Fanny. 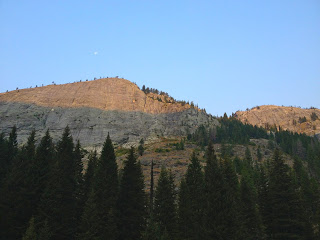 Mike took the lead as we took our first steps toward Hum lake.  The crisp morning air complimented the fresh pine smell that surrounded us, and it seemed in no time at all we were at the cross roads to Duck Lake and Hum Lake. 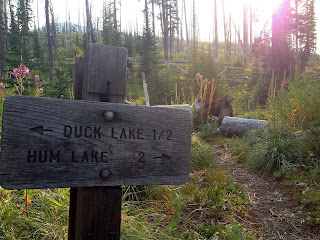 “Be sure to keep hydrated.” Mike said as our 1,000-foot climb over the summit to Hum Lake began.  I had completely forgot about my water. This was my first real walk to an alpine lake, and I was excited to try out my new backpack and water bladder with the big straw.  I had filled it with ice to keep my water cold; I took a big swig out of the straw, and “YUCK!” My water tasted like liquid plastic!  I had cleaned out the water bladder beforehand and wasn’t expecting such a strong plastic taste.  I held my breath as I took another gulp of water; yuck.  Well, at least it was cold. 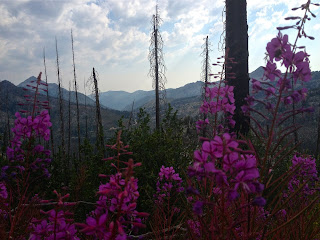 The black skeletal remains of pines that towered into the sky was proof that a fire had once scorched this part of the forest. 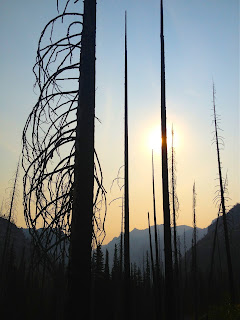 The forest here burned in 1996, and now there are new baby pine trees growing everywhere.  Duck Lake peeks through the white poles that once hid the lake, and it offers up a great view. 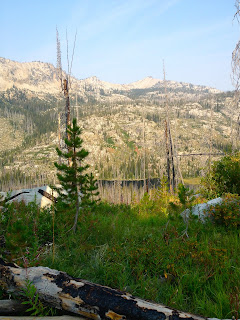 Also hidden in the low-growing shrubs are Grouse Whortleberry Bushes.
“We can eat these.” Mike said as he sifted through the shrubbery.  The berries themselves are about the size of a BB.  I picked one and popped it in my mouth.  After the taste of cold plastic water, the small berry was a great distraction: a tart bubblegum flavor exploded in my mouth, overpowering the yucky plastic taste.  Eye-widened with delight, I picked more berries.  They were so small I had to hold individual berries with my fingertips and bring them up to what I would call a fish face.  With my lips pursed together, I would suck up individual berries so fast, you would think I was starving.  Everything was great, until I lost control of one berry: the berry had missed the target and bounced off of my lip.  In a panic I clawed for the falling berry, but it was hopeless.  I watched in slow motion as the red berry fell out of sight into the shadows of the bush that had once given it life.  Mike held his hand out, and in it were three Grouse Whortleberries.  With a smile I accepted the berries, and all was better. 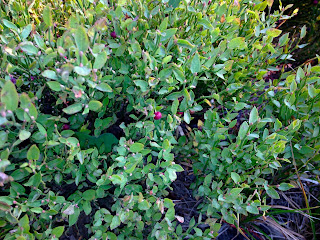 Hum Lake was visible from the top of the summit, and what a glorious sight it was! Our descent down was great, and was welcomed after the climb up.  I knew I would eventually have to walk back up, but it didn’t matter because I could see the lake, and I could swear I had seen a rise, even at 1,000 feet. 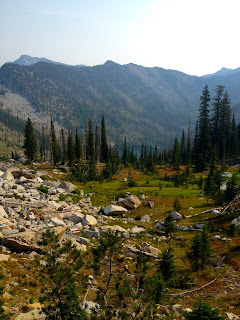 We had reached the lake and it was an exquisite sight.  The water was a nice shade of emerald that called to both Mike and I, as we quickly got a bite to eat. I rummaged through all of the junk food I had brought for the trip, and dismissed it to start fishing.  Fly rod in hand I stepped over a downed tree to get to the water, and when I brought my second leg around, it whacked a stout, broken branch.  “Ouch!” I yelled, but brushed it off to get fishing. 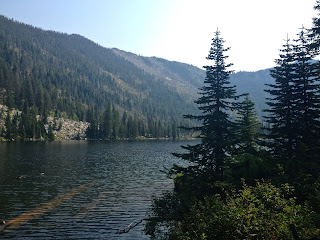 Mike brought in a fish after a little while, and I must say it was nice to see one caught.  Fishing, at least for me, started off very slow.  I went looking for another spot to fish when I saw that Mike had another fish on. 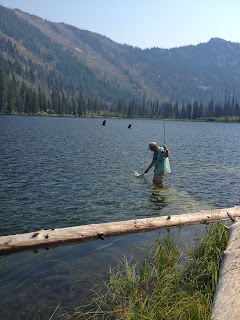 I quickly scrambled over to him, hopping over the fallen tree.  Whack!
“Oh my God!” I said, as I had yet again hit my knee in exactly the same spot, on exactly the same stumpy branch.  I walked it off quickly over to Mike in order to get the picture. 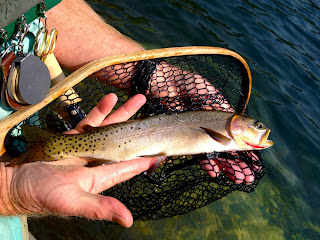 Though Mike had caught some fish, there were long dead periods in between.  I looked across the lake… We were going to have to make our way to the other side if we wanted to experience great fishing.  This was a theory of mine after talking to some campers at the lake; they mentioned they only caught a few, and they kept them.  They are probably not the only ones to do this.  I shared my thoughts with Mike, and he agreed.  We went back to our packs to secure them up.  Mike started walking as I zipped up my pack, grabbed my rod, and quickly hopped over the fallen tree.  Whack! “Arrrrrg” I glared down at the protruding stump that, for a third time, hit my knee in the exact same tender spot.  It had pushed me over the edge; I faced the stumpy branch and kicked it over and over.
“DO YOU LIKE THAT?!”
“DOES THAT FEEL GOOD?!” I growled in between each forceful kick. 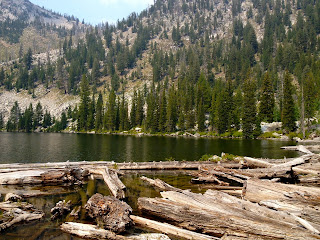 We had eventually made it to our destination, and the timber was thick on the shoreline.  That did not stop Mike.  He walked out on a large fallen tree stump, and proceeded to nail fish.  They were leaping out of the water to eat his fly.  I watched as he hooked fish, after fish, after fish. 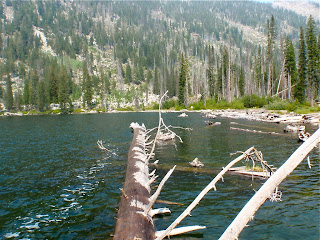 I tied on the biggest fly I had, and casted as far out as I could.  My fly landed with a thud, and after a twitch or two…Ca-Blam!  The fish came at my fly with such force that it rocketed out of the water.  I took a picture that does not do the colors on this fish any justice.  The red on its throat was florescent, and the bronze color of its body was very brilliant.
“You are one pretty fish,” I said as I held it up for the camera. 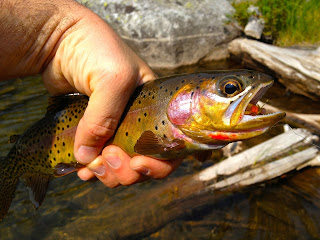 “This is just getting too easy!”  Mike yelled as he brought in his eighth fish, on his eighth cast.  Mike was able to take this underwater shot.  You can see the purple Chernobyl that Mike was using, and he never did have to change his fly. 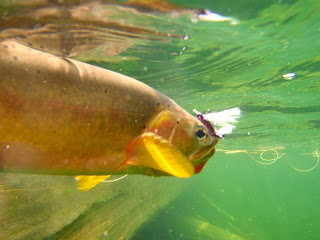 Time flew as we stood on rocks and logs catching fish. 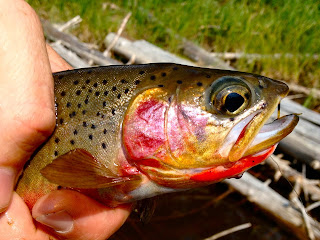 Mike walked back to the start of the lake, and I figured I had another 30 minutes of phenomenal fishing before I should start heading back. 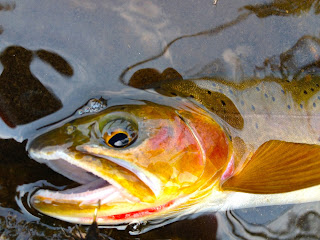 Mike had made it back, and took this shot of the lake.  If you blow up the picture, you may be able to see me at the other end, still fishing. 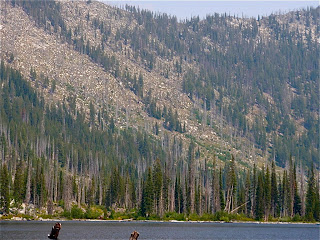 I brought in a fish with my last cast before I secured my fly up and started back.  The way back looked vaguely familiar as I rummaged through the brush and over trees.  The wind was picking up, and I had stopped and stood on some logs that allowed me to see my path ahead.  As I looked, the wind howled with force.  I heard a creaking sound and looked back to see a massive dead tree rocking back and forth.  That certainly lit a fire under me, as I leapt off the logs and pushed on. 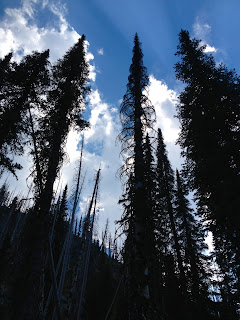 The hike back up was far more intense.  Thank goodness Mike stopped a few times so I could rest. 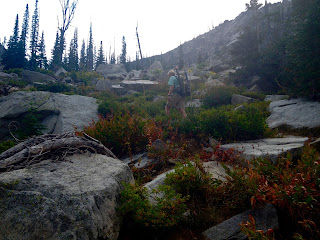 The rolling sound of thunder was good motivation to move quickly.  We had reached the summit, and I got a shot of myself with Hum Lake behind me. 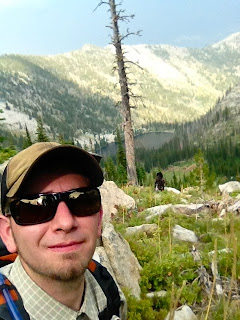 The thunder didn’t let up.
“It’s a good thing there is no rain.” Mike said, “I would expect it.” “I don’t think there is going to be rain.  I don’t even smell it.”  I said back to him.  It was at that exact moment when we got pelted with raindrops that were far larger than normal.
“We shouldn’t have said anything.” Mike said as we made our way back to the truck. 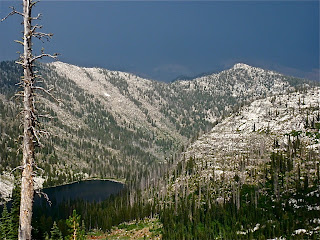 The hike was incredible, and it was fantastic to be out in the wild.  Nothing takes it out of you like a good hike in the mountains.  It was nice to sit back in the truck.  We drank some cold beverages as we rode back into McCall.  We had reached Mike’s house when I saw a creature on the porch of his neighbors house.
“The fox!” I yelled happily. 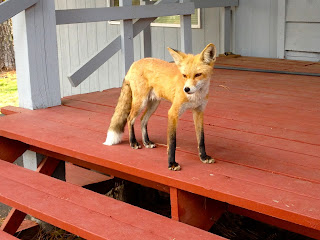 I know all about the hardships of feeding wild animals, thank you very much, but I couldn’t pass up this awesome opportunity.  Below is a small video of me feeding the fox.  It was an exciting way to end the day fishing at Hum lake.

6 thoughts on “Up Hill Both Ways”