Skip to content
I couldn’t stop thinking about alpine lakes, especially after fishing Hum Lake last week.  So I coyly invited myself back to fish another lake with Mike and Kerri McLean up in McCall, ID.  After my last hike with Mike, I earned the reputation of having plenty of junk food; so much that the junk food alone took up over half of the storage in my pack.  Word of this got back to Kerri.  She was expecting dark chocolate covered toffee that we had back at the shop in Boise – Mike had stopped in the shop earlier that day and told her I was bringing some to McCall with me.  So when I arrive to their house empty handed, I was stared down by two bitterly disappointed faces.  Mike had talked up the delicious treat I was to bring and, knowing me, there was going to be plenty for all.  After a few seconds of silence, Kerri spoke.
“There’s got to be some kind of punishment.”
The funny thing was, I was thinking to myself that I didn’t need to bring all of this junk food.  It’s not good for me and I need to grow up and make healthier choices.  If only I had waited just one more day, these two disappointed faces would be full of joy.  The only thing I could say in my defense was, “I did bring three packs of Pop Rocks…”  This did not help. 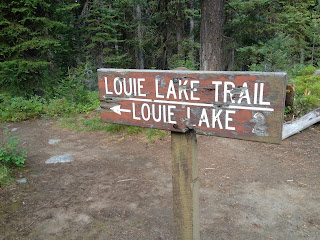 We woke early to start the hike up to Louie Lake.  Mike and Kerri both brought their float tubes for better access around the lake while I took the Roger Philips approach, keeping my pack light to walked the bank.  Almost immediately on the trail we came to our first obstacle: a homemade bridge made out of fallen timber.  Mike crossed first to show us how it was done, even carrying a 50-pound pack. 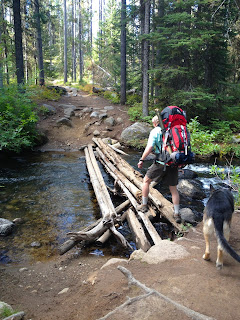 The bridge was not bad at all.  The steep climb in between all of the rocks was worse.  On the Hum Lake trail there were switchbacks that helped with the climb.  Here on the Louie Lake trail we just hiked straight up. 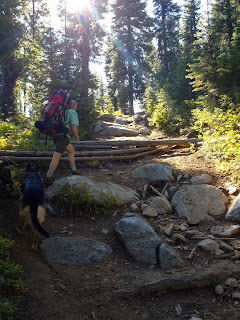 Mike took the lead while Kerri and I followed.  When we neared Louie Lake, both Mike and Kerri stopped to let me have the first look at the lake.  I didn’t realized how close we were, but only a few steps up and the magnificent Jug Mountain reflected in the placid Louie Lake.  All three of us stood there in awe as we took in the sight and wonderful smell of pine that surrounded us.  The splashing echo of a fish rising in the lake snapped us out of our daze, and we geared up to fish. 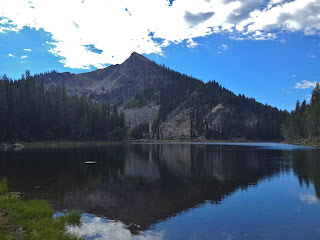 Mike took a second to share one of his secrets to his success.  Here he holds up a can of Trout Slayer Wheat Ale, proving that you are what you eat, or in this case, drink. 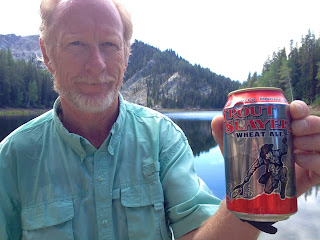 The fish were rising all around, and we were each set up in no time at all.  I stood at the front of the lake and casted out with a Pico Spider.  After a twitch or two a fish rose from the depths and nailed my fly.  I set the hook, and in a second the fish was off.  I saw my Pico Spider float back to the top where it was struck again by the same fish!
“Whoa!” I set the hook again pulling the fly out of its mouth, but the fish wasn’t going to give up that easy.  A third strike by the same fish, and this time I had him.  I brought him in close, and as I went to grab the fish for a picture, it came unbuttoned and shot off. 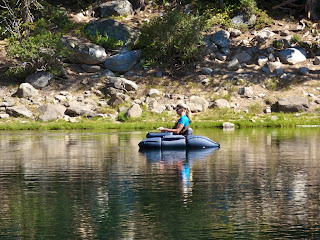 The morning started off a little slow, even for Mike and Kerri in their float tubes.  I decided to start my hike around the lake, and saw an enormous fish rise in the distance.
“That’s worth getting wet for.” I said as I stepped into the lake.  My foot sank into silt up to my calf, and I took another step further.  The silt was getting deeper so I looked up to see if I could get another glimpse of the fish.  Almost to my knees in silt, a duck poked its head up where I thought I had seen the fish.
“It’s a stupid duck!” I said out loud, and looked down in disappointment to see this little frog sitting ever so still next to me.  The frog eased my frustration. 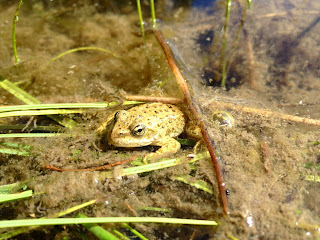 Out on the float tube, Mike was bringing in some fish.  He was able to take this picture of a nice cutthroat with none other than the purple chubby Chernobyl he had used at Hum Lake. 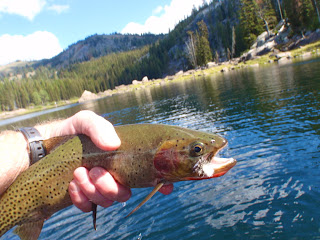 Mike suggested that I head over to a rocky peninsula where the fish were rising, and where I would have plenty of room to back cast. 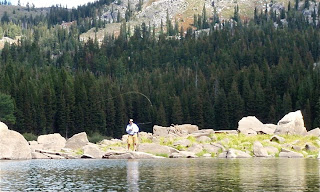 The Pico was not producing fish like I had hoped so I switched to a little green beetle, which paid off dearly.  Fishing was productive in this small cove.  Though I had plenty of fish on, most slipped off right as I was about to grab them.  After many fish, I was finally able to get one in for a picture. 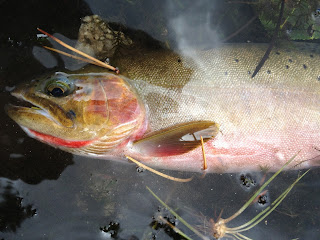 Out on the float tube, Mike was nailing fish after fish with a purple haze.  I was a bit envious that he was out on the float tube and I was stuck on shore; he definitely caught more fish that way.
“Erik, there is a fish headed your way!” Mike yelled, pointing his rod tip in the direction of the fish.  The fish rose to something out of my reach, and the commotion the fish was making suggested that it was having a hard time catching whatever it was trying to eat.  Mike made a cast with the purple haze, and WHAM! 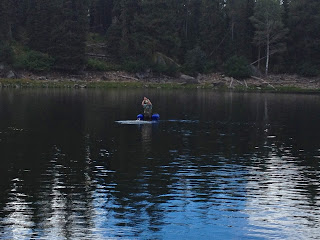 “Wow, this is a nice fish.” Mike yelled over to me.
“I’m going to try and get a shot of it under water.”  Though it was difficult, due to the fish not wanting to cooperate, he managed to get this neat shot. 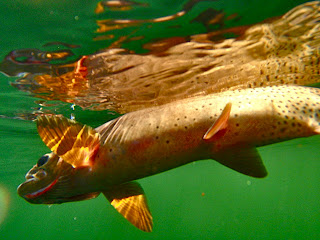 After catching numerous more, he decided to head back and check on Kerri.  Kerri had gone back to shore to be with Sadie, their dog.  Poor Sadie was doing her best to be near both of them as they floated out in their tubes. Kerri thought it best if she stayed on shore with the dog.  I tried to get Sadie to hang out with me, but I must have not have been cool enough.  I continued my hike around the rest of the lake.  Switching back to a Pico Spider, I walked and casted along the shore.  It was a fantastic sight!  My Pico would hit the surface of the water, and with it being so clear, I could see the fish rocketing up from the depth to take my fly. 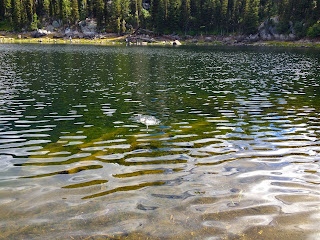 The fish were ever so slippery!  I tried again and again to get a nice picture of a fish, but the darn things would squirm out of my hands!  One beautiful fish in particular I had to get a picture of.  I handled it ever so delicately, just for it to flop out of my grasp and back into the water.  It swam off slowly enough for me to snap this picture of it. 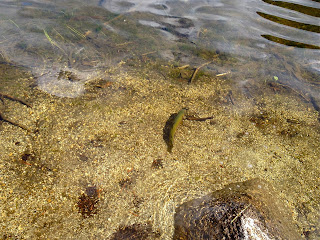 By now I was starving, and bolted back to find Kerri and Mike ready to eat as well.  I shared my Pop Rocks and opened up a protein bar.  Mike, on the other hand, had smoked marlin brought back from his friend Vince from a recent fishing trip.  He offered me some along with some cheese he had brought, saying… “Sorry, but I forgot the crackers.”
“Well now lunch is ruined.” I replied with a chuckle.  Time flew by while fishing, and after lunch it was already five o-clock.

We made good time hiking back, and before we knew it, we were crossing the last obstacle of the path.  We hadn’t packed our gear in the truck before we were talking about what our next alpine adventure should be; I simply know that it won’t be soon enough. 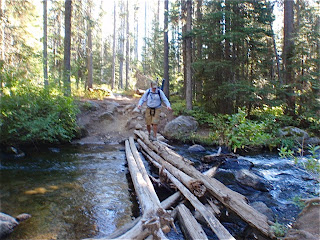 On a side note.  The very morning I was in McCall, my wife Gracy sent me this picture of a hot air balloon that had to make an emergency landing on our street.  I would have loved to have seen this in person, so every morning I see the hot air balloons in the sky I look out front just in case one needs to make an emergency landing.  I haven’t seen one yet, but still, one mustn’t give up hope. 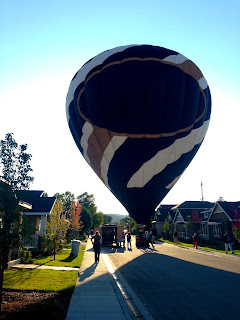