Skip to content
My wife, Gracy, and I woke up early to meet Mike and Kerri McLean at their house in McCall, Idaho, to hike up to Boulder Lake. 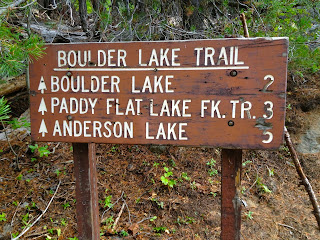 To our delight, we were going to be accompanied by their next door neighbor, Doris.  Doris is not your average 73 year old; she hikes regularly on various trails and lakes in McCall that some would consider to be expert level. One glance and I was worried I was not going to be able to keep up. 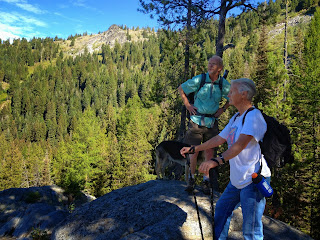 We all headed up the Boulder Lake Trail in single file.  The pathway was lush with huckleberry bushes and all kinds of green plant life.  Ferns poked behind every shadow provided by a rock or tree, adding a complimentary sight to the thick, fragrant air.  We had only walked up a little ways before we were met by a pack of horses; we moved out of the way so they could pass us. 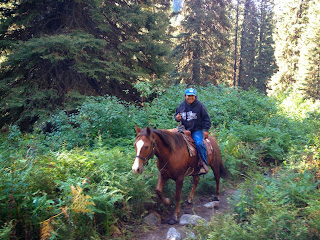 Hiking with Mike, Kerri, and Doris is like hiking with three walking encyclopedias.  You never know what you are going to learn about the forest, or hiking terminology for that matter.  In this particular case we learned the term “road apples”.  Road apples are what horses leave behind ever so neatly, blanketing the trail.  All those years playing hop-scotch as a kid paid off. 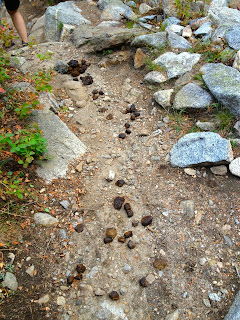 As soon as we arrived at Boulder Lake I geared up my Helios 2 for battle and started walking along the bank.  By the time I was out of ear shot I looked back to see the rest of the clan still back where we first arrived.  In retrospect, I wonder if that was rude of me to take off the way I did.  I should have thought to invite my wife at the least!  Then I saw Mike out on a rock fishing and thought to myself, thank God there’s another fly fisherman out here that understands… So I continued to walk on. 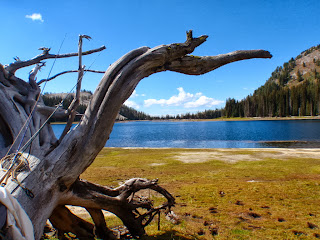 Gracy caught up with me as I was casting to a rising fish.  My little green beetle hit the water, and from the depth came a little rocket that snatched my fly in less than a second.  I set the hook and the little chrome rocket danced underwater.  I brought it in for this stunning picture. 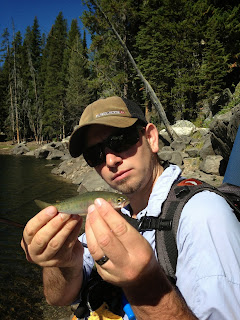 After taking my picture, Gracy lost interest in me, and started slowly creeping toward a chipmunk that was peaking over the top of a big rock.  I stopped fishing for a second, just to see how close she was going to get.  With her arms stretched out, she took this picture of the little chipmunk. 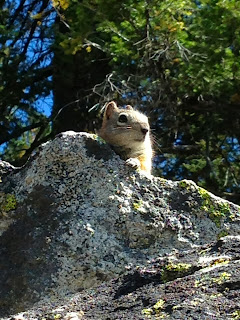 Just as suspected, when I decided I wanted a close-up picture of the chipmunk, I moved too quickly and spooked it.  Gracy continued walking while I stayed put and caught a few more fish, and man are they camera shy!  Every fish I caught would not sit still, even for a second.  I was able to scrounge up this shot of a fish; the colors are just fantastic. 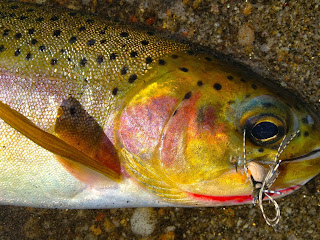 Doris caught up with Gracy, and I was soon passed up by Mike and Kerri as they walked around the lake.  Though I was catching fish where I was, I thought I had better catch up to have lunch with everyone. 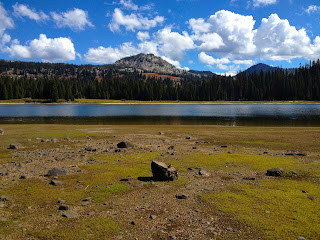 As I walked I came across a lush, grassy portion of the lake trail, and something moving in the grass caught my eye.  “Frogs!” I yelled out loud as I saw roughly ten or so frogs crossing my path. 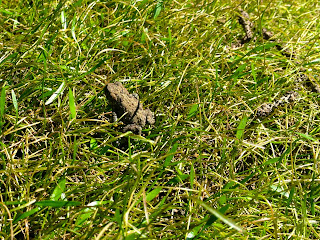 The frogs were tiny little things, and I seriously had to watch every step to make sure I was not stepping on any.  I would stop to look up, and it was like watching baby turtles scour to the ocean. The grass was dotted with frogs all headed to the lake.  I had caught up with the others, and Mike had suggested we continue the hike to Anderson Lake.  “What’s another one and a half miles?” He said, adding “and it is pretty much a straight shot there.” Everyone was game as we walked into the big trees to find the path. 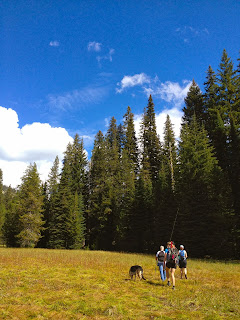 For some reason when Mike mentioned Anderson Lake, I took “straight shot there” to mean that the path was flat… Boy was I ever wrong.  I discovered in a very short amount of time that he meant straight over the mountain.  The path was narrow, almost as narrow as a small runoff channel.  Mike once again lead the way, and when we finally hit the summit he quickly turned to us an yelled, “Well, we went the wrong way.”  “What?!” Doris yelled, sounding alarmed.  Mike smiled.  “That was not very funny,” Doris said.
It was a nice relief to hit the summit, we stopped to rest and I had to take a picture of my lovely wife. 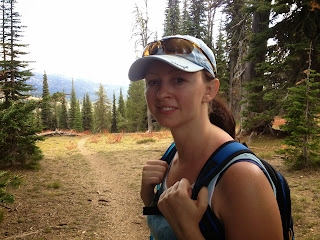 The walk down to Anderson Lake was not bad at all.  I was practically running down and missed the “King of all mushrooms” my wife called it. 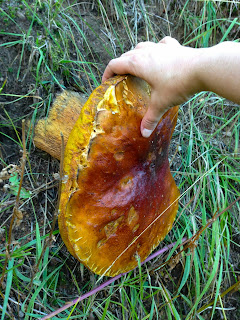 Anderson Lake epitomizes alpine lakes.  The water is so clear that you can see the bottom.  Different shades of jade turn dark as the lake slopes deeper.  The glass-smooth surface reflects the pine trees and granite rock that tower around the bank, only to be blocked by the lily pads that blanket the inshore. 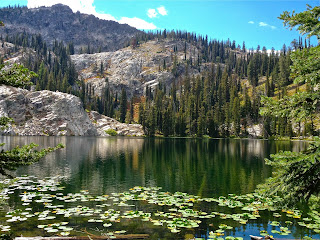 Mike didn’t waste any time leaping on a fallen log, while I walked around the bank looking for a clear spot to cast. 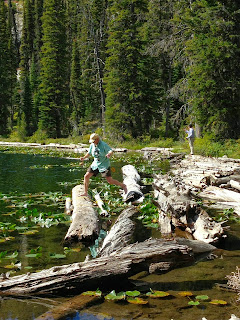 Brook trout inhabited this lake; the colors that make up their skin are brilliant. 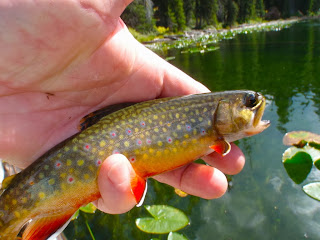 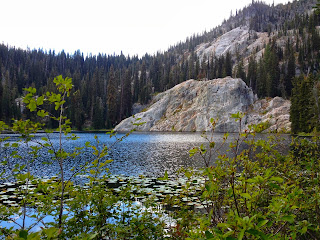 I saw Mike catching fish on the other side of the lake, and on my way around I found an opening where I could make a few casts.  As I walked to the opening, I noticed there were small piles of deer poop that covered my path.  I was careful not to step in any, when I noticed the small poop-like balls started to move.  FROGS!  Hundreds and hundreds of frogs piled up on top of each other right next to the water’s edge.  I have never seen so many like this before, and they were all scattering as I approached. 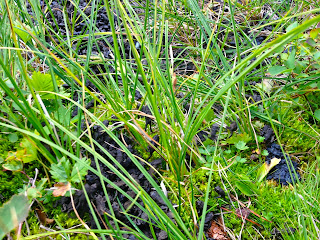 Some frogs were out further in the water, and I thought I saw a fish come up to take one.  Perhaps that was why the fishing wasn’t phenomenal here; the fish could very well have been gut-stuffed with frogs.  It was about time to head back, but I couldn’t leave without catching another brook trout. 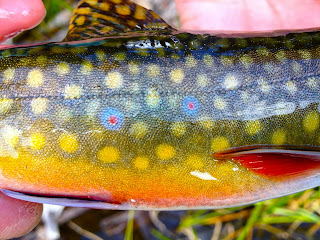 The climb back to Boulder Lake seemed small compared to the hike up to Anderson Lake, and it was all downhill from Boulder Lake.  The sun was setting as we neared the end of the trail, and we all made it back safe and sound. 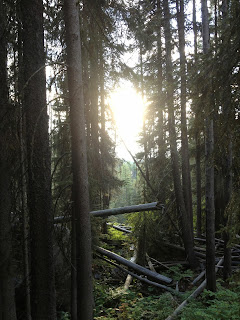 Gracy’s big toes were hurting from all the downhill hiking. Though she bruised her big toenail, she is happy that we decided she needed new shoes… Now I want new shoes.

7 thoughts on “Over the Hills”