Any body of water will turn the head of any sane fisherman. Perhaps in that split second there is a bug floating over a hungry fish, and perhaps that hungry fish will rise right at the moment you are looking.  Wouldn’t that just make your day?  Small dimples scattered about the river is what made my good buddy, Mert Burns, stop his vehicle to take a peek.  Like any great fly fisherman, Mert spent more time looking at the water than paying attention to the road out at the Owyhee.  Normally that’s not a big deal, only in this particular case he was also driving.  But I am no stranger to the occasional jerk of the wheel followed by, “Whoops, better watch the road… ha ha ha.” I opened the door to gear up, and as I stepped out, about six hoppers hopped away to hide; not a bad sign at all.

After seeing the terrestrials flee we rigged up and tied on a fly I had never used on the Owyhee before, a Pico Spider.  Some say that it’s unwise and downright arrogant to tie a fly on before you have checked out the water. Well they’re right, but that didn’t stop me from doing it.  Sure enough, an unsuspecting trout surfaced near the overhanging shrubs.  My Pico splatted down in its feeding lane, and leisurely the trout surfaced, taking in my Pico Spider. 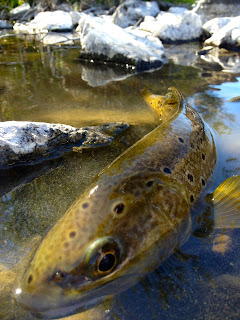 Mert was just upstream from me presenting a delicious hopper.  There were fish upstream from the one I had just brought in, and Mert had zeroed in on them.  A fish came up and ate his hopper, and immediately Mert set the hook!  One bump and the hopper came out of its mouth.  The line shot back toward Mert with the fly still attached, unharmed.  Patience and persistence set in as Mert took a few steps closer, and soon hooked his first fish of the day. 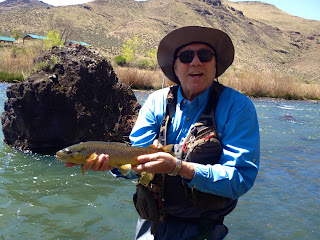 I walked upstream a ways and came to a rugged halt as my peripheral vision caught sight of a monster!  I hunkered down peaking around a bush like a meerkat checking for a cobra.  Carp!  It was a big carp cruising in a circle.  I was not geared up for carp at all, but wouldn’t that be amazing of it came up to eat the Pico Spider?!  Behind a wall of bushes I presented the Pico to the carp. The fish swam, heading right for the Pico, and… it didn’t give a damn.  The carp swam its path with not so much as a glance at my fly, so I whipped my fly rod back and shot it straight for the carps head.  With an aggressive slap, the Pico hit its target, spooking the carp, just as desired.
“Gooood.”
A trout rose just within reach in the stagnate portion of the water.  I hurled my Pico over to it and gave it a twitch.  The fish took the Pico and I brought it in for this picture. 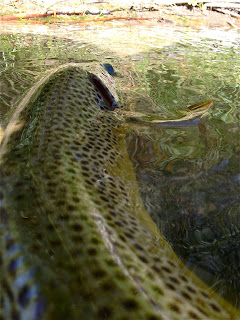 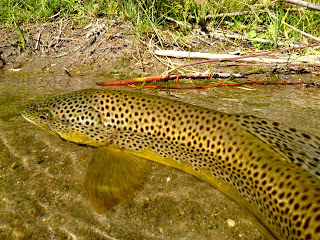 We moved to a new spot and greed got the better of me.  I had hooked a fish in a short amount of time, and after bringing it in I looked up stream to see that Mert hadn’t caught a fish yet at our new spot.  The fish still rose around him so I went back to fishing. 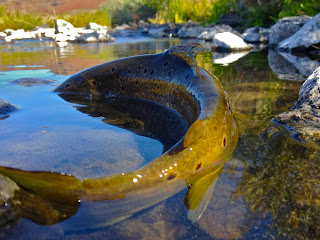 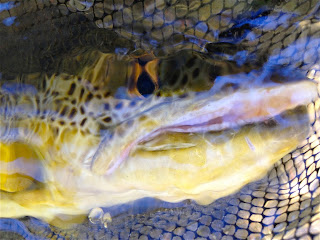 I can honestly say I had no clue what these fish were taking.  There was such a variety of bugs on the water that I tried to match, but with no luck.  I went back to the suspended midge and caught a few more fish. 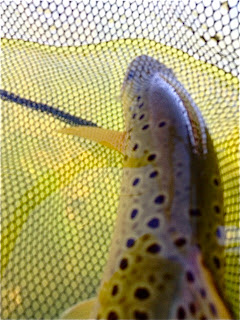 I called Mert down to where I was fishing to see if I could help him.  We switched his dropper and casted his new menu of flies to the rising fish.  A fish took his dropper, but the hook wasn’t set! “MERT!  Set the hook!” Mert’s rod went up, but with no fish attached.  He had a hopper dropper set up, “I was expecting my hopper to go under when I had a fish.” he said.  I explained that with the nature of these fish and with our current water flow, to set the hook when the hopper stops moving.  Mert did just that on his next opportunity.  He set the hook hard enough to break off his zebra midge dropper that was secured with 6X tippet.
“Well at least the fish took,” he said with high spirits.

The fish were starting to refuse my fly, so I switched back to the Pico.  Despite how delicately presented the Pico was, the fish seemed to spook when it landed.  I switched to a little green beetle, and that got their attention. 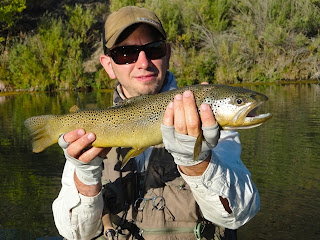 Even the snobby-ist of fish would hit the green beetle.  The bad thing about the fly was that it was almost impossible for me to see.  Over time I have built up my confidence in my casting ability, almost to the point where I don’t even need to see my fly to know where it is; this was developed after fishing 26- and 28-sized flies.  Every fish that took the beetle did not break the surface of the water.  Instead, there would be a slight disturbance where I thought my fly would be, then I would set the hook and would have a fish on every time. 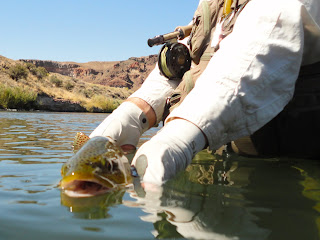 The fish are certainly wising up at the Owyhee, and it’s about time because I love a good challenge.  We packed up and headed back home, when on the way Mert called his wife, Roxanne.  He explained how the day went for him, and I could hear her telling him that it was ok to catch only one fish.
“I’m not sure what’s worse, her snickering or her follow-up pity speech.”
Roxanne also invited me to have dinner with them when we got home.  It had been a long time since I had chatted with both of them, so I accepted… I would have accepted even if I has seen them just yesterday.  It was a fun way to end the day.  Roxanne started a blog that talked about her experiences with her new hobby, hiking.   Her goal is to accomplish 60 hikes at age 60; which is AMAZING, because she doesn’t look a day over 39.