Skip to content
Stereotypically, California plates in Idaho is one of the most dreaded things, and to see them on the river is even worse. Idahoans fear that the Californians will move here and bring their big city ways to beautiful rural Idaho.  Ironically, Jim Cox, from Portland, OR and I, a Boise resident, headed out to fish the Owyhee in a rented car with California plates.

Well the plates loomed over us like a dark storm cloud as we drove through the first small town on the way.  “You better stick exactly to the speed limit through these towns, Jim.” I warned, but Jim was way ahead of me, “Oh you bet I will, I am sure we’re targets with these plates.” Despite our odds, we made it to the Owyhee unharmed, and parked when we saw fish rising. 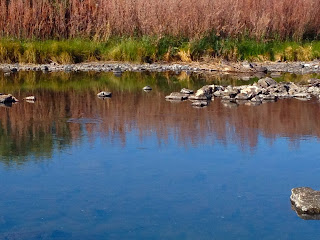 Jim works for Western Rivers Conservation in Portland, and was in town to speak at the Boise Valley Fly Fishers meeting; so I was a good host and made sure he had the first crack at the rising fish. 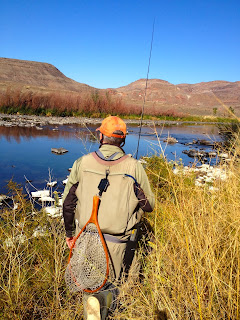 With the flows at 23 CFS, the trout were cautious and would spook at a badly placed line.  The water was almost stagnate as Jim approached some feeding fish.  The small dimples made by the fish were almost invisible, but the hushed sound of a tap on the water would easily give up their location to any experienced dry fly fisherman.  Delicately presenting a suspended midge, Jim set the hook on his first Owyhee brown! 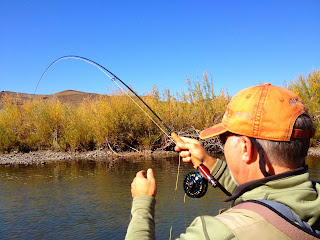 The fish thrashed as Jim brought it in to start the day off right. We had to wait a few minutes before the other fish would begin rising, and when they did Jim was ready. 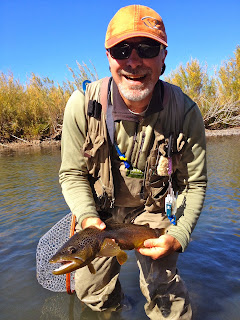 Jim had brought in a few fish before I headed upstream to catch a few fish for myself.  I located some unsuspecting trout feeding like crazy, and casted upstream to them.  It was difficult to see my fly on the water because I had switched to an RS2 mahogany dun.  Over the years of dry fly fishing and practicing my cast, I have become confident in knowing where my fly should land.  A head came up where I suspected my fly to be, so I quickly but softly set my hook and felt the pressure of the fish.  Immediately I tilted my rod off to the side, bringing my rod tip level with the water while keeping the tension on the fish.  This technique can prevent the fish from thrashing around and spooking the other fish. 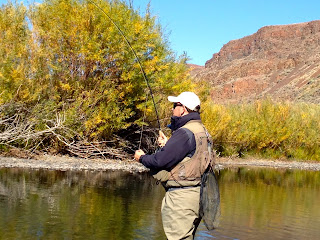 After a few fish, I saw there were still more rising so I called Jim up to have a shot for a few more, and he didn’t disappoint. 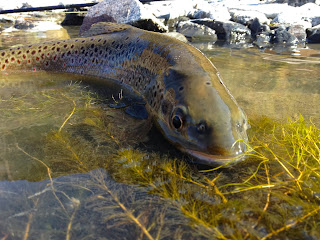 We had moved upstream and found more rising fish, but these fish were keyed onto something we didn’t have tied on.  Both Jim and I were struggling to get a fish interested in either of our flies.  Finally one took my fly!  The fish leapt and leapt out of the water, and to no surprise it was a rainbow. 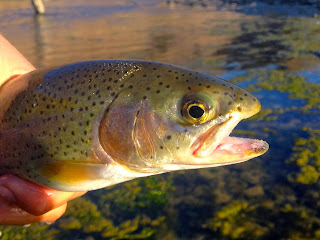 Jim was struggling, and asked, “Would you suggest a terrestrial, like an ant?” “Absolutely!” I said.  Jim tied on a parachute ant; “There is a big one here that won’t take my fly, and it keeps rising.” Jim presented the ant, and the fish exploded on it! It was a slab of a fish!  It tail-walked and jumped like mad, and when he landed it, it was a fantastic rainbow trout. 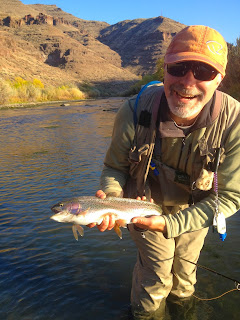 The rest of the evening was very difficult.  Fish were rising right in front of us, and no matter what we put on, they were not interested. Jim had switched to a small black para midge and had a fish take.  It was getting dark, and the fish were still rising.  It is always very hard for me to leave rising fish, so I switched back to a suspended midge for one final go.  The fish must have changed it’s mind because it ate my fly, and to my surprise the fish was only about seven inches.  I quickly got it to the net and held it there for a long time.  “I can’t just let it go.” I told Jim.  I stared at the puny fish that snubbed me time and time again as it struggled in my net.  To be humbled by such a small fish makes you think: the fish don’t care who you are, how rich, poor, or successful you are. Materialistic things mean nothing to this little fish.  I smiled and dipped my entire net in the water, and watched the little fish dart off; how much more pure does it get?