Skip to content
It has been far too long since I have fished with my brother, Kris, AKA Feef, AKA Deef Wan, AKA The Mo.  I just call him Mo in person, because apparently Kris is far too much work.  He was gone all summer for an internship, so it has been a while since we’ve been on the river together.  Feef knows just enough about fly fishing to where he feels he doesn’t need to listen to me, but no matter where we go fishing we always have a good time!
I arrived at the Boise River first, and had begun to gear up when I saw his truck coming from the distance.  Seeing my car there first, he felt the need to make an entrance.  He turned into the dirt parking section without slowing down, and practically ramped the small bumps along the way before his truck came to a screeching stop. 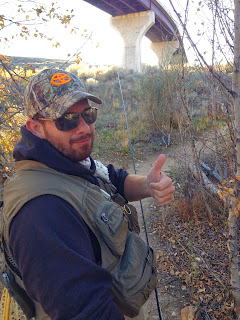 We quickly geared up and headed to the river.
“I was here the other night and saw fish rising everywhere.” Feef said, making his arms move like fish, with his fingers and thumb opening and closing, mimicking the mouth of a feeding fish.
“I think they were taking BWOs!”

We arrived at the spot and Feef began to look through his box of flies.
“What do you see?” He asked.
I looked around and said, “I see mahogany duns.”
“What’s a mahogany dun?”
“It’s like a BWO, only it is more brownish red.”

Feef thumbed through his box, “Is this one?” He asked holding out a fly.
“No, that is a suspended midge.”
“Oh yeah!” he said quickly putting his fly away and holding up a new fly, “Is this it?”
I looked at the fly, “Brother?! Thats the same fly you just showed me!”
“O yeah, a suspended midge.” He quickly put the fly away and grabbed another, “This one here is a mahogany.”
I looked down at his fly with disgust, and with a deep sigh said, “A trico spinner, Brother?!” He looked up at me with a sad face.  I looked back at him and said, “this is going to be a long night.” We both started laughing. 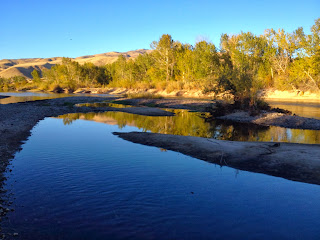 Just as he saw earlier, the fish started to rise.  I set my hook, ripping out two fish about the size of a keychain.
“Wow, these are some good sized fish you brought me to, Mo!” Not even looking over to me he said confidently, “I know I saw bigger ones out there, Brother.”
It was getting dark, too dark to see my fly anymore.
“It’s time to get going.” I said.
“I want to try this fly,” Feef said, tying one on as fast as he could in the night.  I started to walk back when I heard a splash!
“I got one!” Feef yelled.
I immediately ran back to him, and heard his reel screaming! Splash after splash, the fish was flying out of the water; his rod was doubled over fighting the fish.
“You better bring this one in, Brother, if your going to save the night!” I said, adding to the pressure.  Sure enough, he brought in this nice, shiny rainbow, followed by some whooping and hollering of approval. 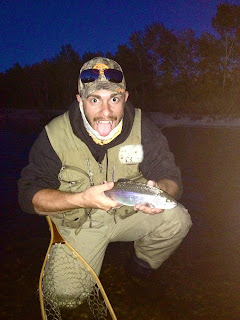 I had just about gone through every mahogany pattern I had, and had a few takes, but only with small fish, so I asked,  “What fly did you use?”
“A hopper!”
“A hopper?” Once again I am reminded why sometimes, despite the obvious choice, my brother just does what he wants; every once in a long while it pays off.  And sure enough, at the end of his fly line was a sized-14 yellow crystal stimulator.

After he released the fish we headed back in the dark.  Wading in the dark offers up its own difficulties; small river rocks are hard to see, and it is east to stumble over them.  My brother found that out as he stepped awkwardly on a rock that was large enough to make him slip.  He whirled around regaining his balance, and in the process lost the very fly that saved the night.
“My fly!” He cried, looking down in the water.  And sure enough it was gone. 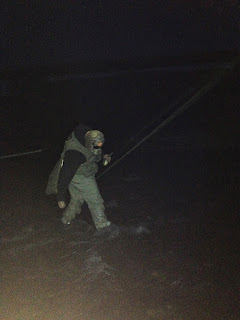 In all the years we have fly fished together, we have always come off the water with people asking how we did.  My brother usually replies “I did okay, but my brother really nailed them!”  Well this night Feef nailed the fish, and I was the one walking off the river empty handed.  It was a nice reminder of how much more I need to learn about the Boise River in town, and no matter what excuse I make for not catching a fish; it all boils down to: he got one and I didn’t.  Good job, Brother!