Skip to content
Back in college I went to many BSU football games, but my all-time favorite was to fish near the stadium during a game.  The roar of the crowd after a cannon fire was besieging, not to mention the infamous “BOISE!”, called by one side of the stadium while the other quickly replied, “STATE!” The sounds of game day that blasted the river was quite the experience, so when my Dad came to town I had to take him. 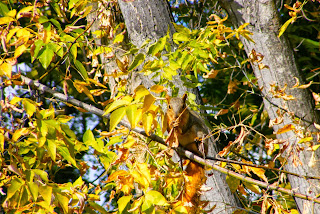 My dad, still wanting to represent Boise State on the river, had on his BSU jersey for the occasion.  We approached the water and he asked me what fly he should use, so I looked around and said, “Looks like there is a blue-winged olive hatch.” I didn’t see any rising fish, but figured that would be our best bet, after all, I am too stubborn to nymph.  “This is the fly I want to use.” He said, holding out an orange and blue humpy I had tied for him almost a year ago.  “Sure Dad, use it…” I have learned from fishing with my dad that no matter what I say he will not listen, so I just go with with whatever he wants. 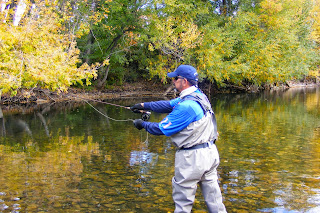 My dad started casting up stream from me as I held my fly in my hand, waiting for a rise.  He whacked the water with every cast as he tromped upstream.  I looked back at the water in front of me, waiting for a rise, when I heard my dad, “Hey, I got one!”  “You’ve got to be kidding me…” I mumbled to myself under a chuckle as I watched his fly rod dance with a fish.  He looked at me smiling.  “Alright! Do you need help?” I asked as I started to walk up to my dad. “No, I want to get him by myself!”  I stood back laughing as his fish fought with all of its might.  He did everything right.  His rod tip swooped back over his head as he scooped up the fish with his net. 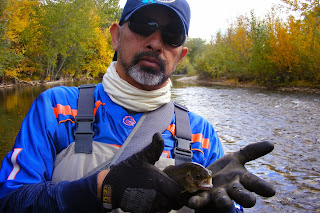 “See, Daddy know what he’s doing,” he said smiling to me in a matter-of-fact way.  I laughed as he let it go, “Well, good job, Dad!”  We went back to flogging the water as I yet again waited for a rising fish. 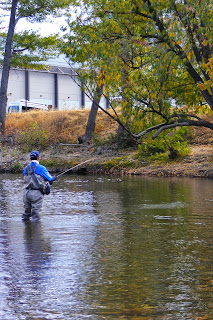 The roar of the crowd was getting louder as we got closer to the stadium.  My dad casted out his BSU humpy, and sure enough, another fish slammed it.  “OH!” He yelled as he brought both of his hands over his head, as if sticking a land in olympic gymnastics, to set his hook.  “Damn!” He said, as the fish came unbuttoned.  “That’s okay, they are still hungry.” I said encouragingly. 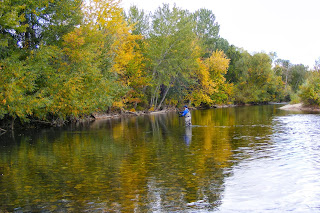 The cannon boomed, and the crowd roared.  My dad looked over at me with a smile.  The chanting of BOISE… STATE soon followed.  “That sounds cool from here.” He said, and I agreed; “that is why I like fishing on game day.  I think it’s better than going to the game.” He looked at me as if it could be a toss up, then went back to fishing.  Another fish nailed his orange and blue humpy, and he brought it in for this picture. 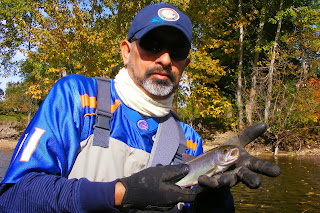 “That makes three fish for me.” He said, “How many have you caught?”  I smiled back at him, “I brought in one so far.”  “Well I didn’t see it.” He said quickly.  “Eeeeeeeee!” Was the only thing I could think of saying.  “The one you caught, was it in a blue-winged olive?” He asked as he continued fishing.  It wasn’t, I didn’t have a BSU fly, but I did have an orange stimulator; I thought, that should be close enough.  It was loud on the water, so to avoid telling him that I had switched my fly because he was catching all the fish, I walked away pretending I didn’t hear the question. 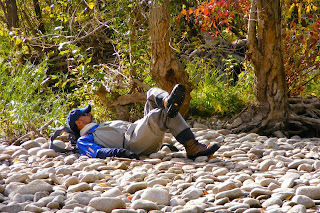 My dad ended up hooking eight fish and bringing five to the net, and I only brought in three.  Stupid Boise River fish don’t even know what’s good for them, I thought as we got off the river.  We met up with my mom and the first thing she asked, as always, was, “How was fishing?” My dad didn’t miss a beat, “I brought in more that Erik!” Rightfully shocked at the news, she looked at me for confirmation, “What?!” she said followed by a laugh.  “Yep,
dad brought in five fish.” “Well all right!” She said still laughing.
It was a great day on the water, not only because my dad caught fish, but also because this was his first time catching fish all on his own.  Now, knowing my dad, he will think his BSU fly will work everywhere just as good as on game day… I guess we will see the next time he comes to town to fish.