Skip to content
It snowed in McCall, which means alpine lake fishing has just about come to an end.  I spoke with my hiking buddy, Mike McLean, about the effects snow can have on hikers, and he suggested we hit a shorter hike up to a lake that was a bit lower in elevation.  My wife, Gracy, and I met up with both Kerri and Mike and headed to the trailhead. 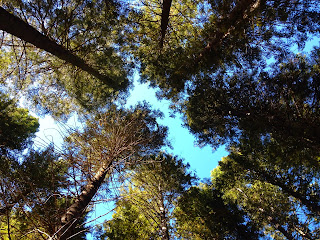 You may have figured by now I had learned that when Mike says shorter and lower in elevation, it doesn’t necessarily mean it’s an easy hike.  I fell for it again and was corrected almost immediately as we hiked up a large steep, awkward staircase created by big boulders only moments after we started. 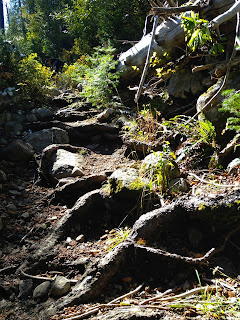 The trail was wet in places, and it didn’t take us long to figure out why.  “Snow!” I was very happy to see it lightly dusted on the trees.  It got thicker as we headed further up, and as soon as there was enough I grabbed a handful and flung it at my wife, nailing her arm.  She didn’t find it as amusing as I did. 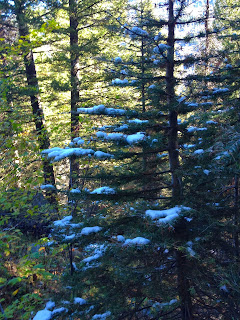 Before we knew it we were trekking through seven inches of snow.  Mike led the way as the rest of us followed.  Kerri had been up this hike before and told us to keep an eye out for a cairn that was somewhere along the trail; the only problem was that the cairn was under all of the snow, so Kerri had to rely on her memory to find it. 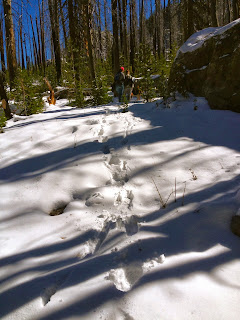 “It has got to be here.” Kerri said as we came to a leveled opening on the path.  She started poking through the snow with her walking sticks in search of the cairn.  We all joined in, kicking at every bump along the path.  “I found it!” Kerri said.  She pointed up at the saddle in the mountain, “We need to get up there, and when we do we should be level with the lake.” We all stopped before we took our first steps on our off-path-journey.  All we could see was fallen timber, rock, and thick snow everywhere…with no path in sight. 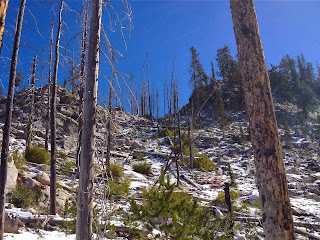 “I think we should head this way around the saddle.” Mike said pointing another way.  Kerri confidently replied, “No, this is the way.  We need to get to the saddle and the lake will be there.”  Gracy and I stood back as the experts discussed the right way up the mountain.  The decision was made to skirt up the mountain to the saddle. 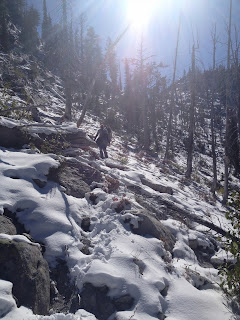 Up and up we went teetering the side of the mountain.  I put on my gloves to help with the cold snow as I crawled over boulders following Mike’s path.  Did you know that fallen wooden stumps are slicker than ice, and under the snow they make for a nice slick surprise?  My foot hit one under the snow, and SWOOSH!  It’s a good thing my other foot was nice and secure to counterbalance the slippage. 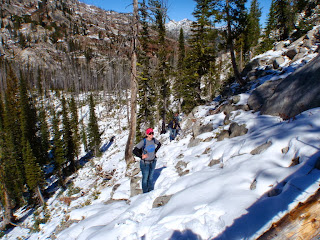 We would take breaks on the steep terrain as Mike stopped to calculate the best way up. 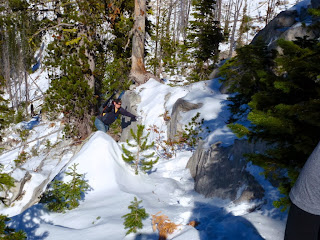 Almost to the top Kerri said to me, “I hope Mike was not right when he said we should go the other way.” We both looked up as Mike and Gracy had reached the summit of the saddle.  “Do you see the lake?” Kerri yelled.  Gracy looked back at us, and shook her head no.

We all stopped and took a break.  Gracy brought out her phone and it had service.  Keying into our location, Gracy brought up the map and we saw the lake was not as far off as we thought.  Mike pointed to the tall peak to our right and said “we need to go around that.” 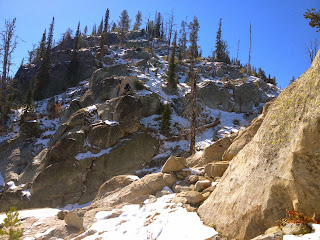 The last thing anyone wanted to do was climb higher, but together we packed up and headed uphill.  I went to put on my gloves and discovered that I had left them sunning on a rock back at the saddle. 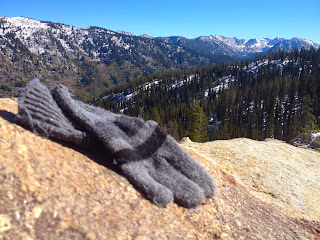 I hurried to catch up with the rest, and little did Gracy and I know, we were about to become mountain climbers.  As we ascended up the peak the awkwardly slanted path like before had turned into steep cracks around a granite wall.  This was the hairiest part of the hike, that I didn’t want to revisit. 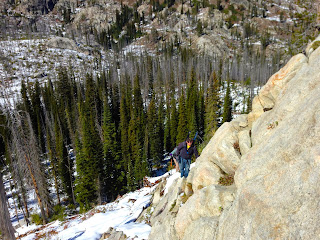 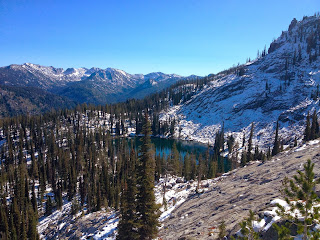 Even from this height we saw the ring of a feeding fish.  “Did you see that, Mike?!” He looked at me and said, “If your are talking about the rise, then yes!”  At our new location the only way to the lake was down the granite quarry. 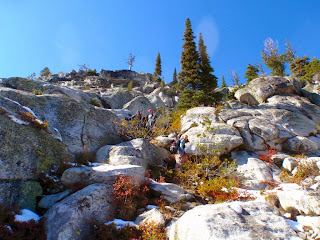 We slid down as quickly as we could, and the lake was almost within casting distance. 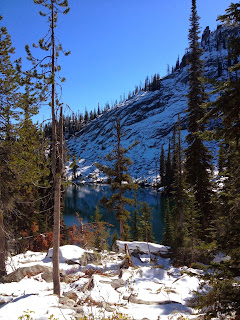 The water was crystal clear and we could see nice fish cruising the banks, looking for something to fall in.  Mike and I rigged up quickly as the ladies sat on a big rock to sun their wet socks, shoes, and feet. 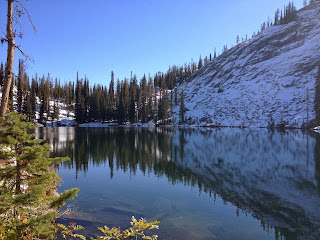 I walked to another small rock and casted a pico spider to a cruising fish.  The pico hit the water and the fish changed course to take it.  I set the hook, tearing the pico out of the fish’s mouth, and the fish started swimming away.  My hook set sent my pico flying behind me, and in mid-air I recalculated my cast, sending the pico back out to the same fish.  The fish turned around at the sound of my fly slamming the water, and ate it! 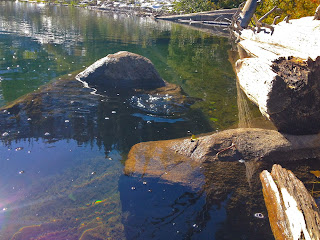 The fish was a nice size, and the colors were brilliant.  It swam off quickly and I noticed my line was caught in a small bush.  I roll casted my fly out to get some of the line out of my way, and quickly started to untangle my line.  Splash! Without looking up I set the hook on another nice fish, and I was able to get this cool shot of it before it swam off. 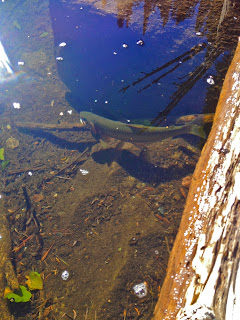 I brought in a few more fish after that one.  I had yelled over to the ladies to see if one of them could come get a picture of me with a fish.  They still had their hiking shoes and socks off, and were not at all willing to put them back on, or walk barefoot through the snow.  I casted out a little further, and in a flash a fish took my fly!  “Whoa!” I yelled out loud as the fish started taking line from my reel.  Splashing and darting from left to right, the fish fought with all of its might.  I brought it in and was amazed by its size!  I looked up to see my wife still had her shoes off; you would think that after a three mile hike another twenty feet would be no big deal…  I set the fish back in the water and was able to take this shot that doesn’t do it any justice. 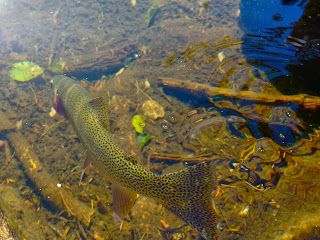 We only got to fish for 45 minutes or so before we decided it was time to get going.  It took us longer than expected to reach the lake, and we still were not one hundred percent sure how we were getting out.  We packed up, and Mike found a blaze on a tree marking the way out.  Thank goodness it wasn’t the same way we had come in! 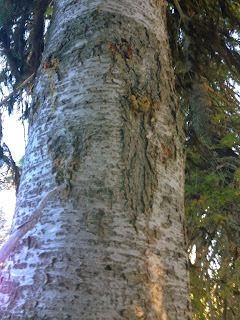 With snow everywhere we all relied on Mike’s intuition to lead the way out.  We each stepped in his footsteps leading back through the snow. 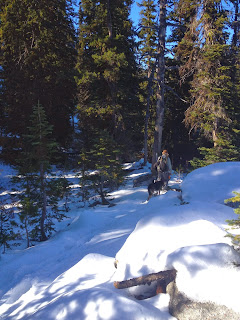 We had made it back to the saddle, and it turned out that both Kerri and Mike were right about the path to the lake; we all had a laugh about it as we skirted back down the mountain to the main path. 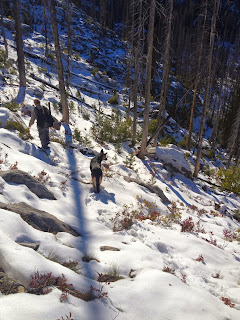 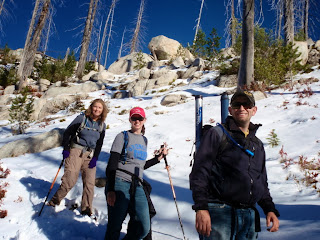 We all made it back safe and sound with another alpine lake notched in our belts.  I have to give Sadie, Mike and Kerri’s German Shepard, recognition.  Despite the slick and steep conditions, she would run up and down to each of us making sure we were all accounted for the whole time.  As soon as we got back Sadie jumped in the back seat, and fell asleep on the way back to the house.  She earned it. 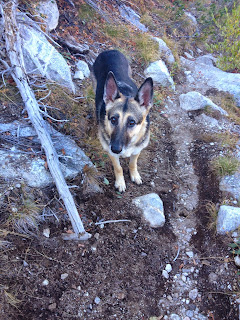 11 thoughts on “Off The Beaten Path”