Skip to content
It’s that time of the year again, when I have the opportunity to help with John’s College of Idaho fly fishing class outing.  The last class didn’t go so well because I neglected my student to selfishly catch monster bass.  This year was much better; I had mentally prepared myself to help a student or two catch a fish.
Lucas was the lucky contestant that got stuck fishing with me on this outing.  At first he spoke confidently of his casting abilities and I was happy to hear them; that all changed when we, ever so delicately, stepped into the water.  “Did you see that?” I said pointing to the slightest disturbance, indicating a rising fish.  “Yeah.” Lucas said.  The water was almost stagnate, so I explained. “With the water moving this slow it’s important not to slap your line down.  You are a good caster right?”  Lucas did not look very confident anymore. 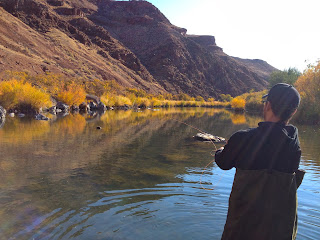 He did nail one cast, but the fish had moved.  With these low flows, the water is almost still.  The fish start swimming in pattern, gulping flies in their way.  This often calls for careful timing and soft accurate casting, but there is another way!  I grabbed Lucas’s fly and changed it to a green chubby with a split-wing PMD as the dropper.  Lucas presenting it perfectly, learning very quickly in these conditions; a fish neither of us had seen came up and ate his dropper.  The green chubby darted back under water, “There it is!” I yelled at Lucas, who had completely missed the take.  Startled by my reaction, he raised his rod tip, and brought in his first Owyhee brown.  The fish weighed in at 4 pounds and was 22 inches long. What a great first fish! 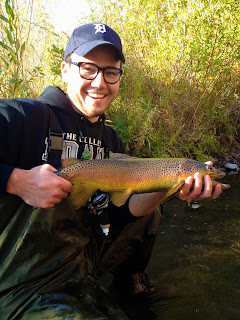 Though Lucas was picking up on things quickly, he still needed more mentoring to get into some fish.  We had picked a new location, and while Lucas casted to some fish I headed up stream to scope out more rising fish. 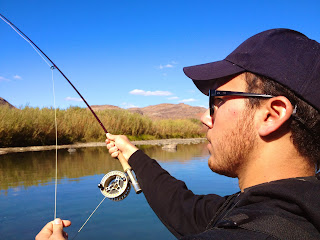 Sure enough, there were about five fish sipping emergers.  I called Lucas to me to show him the rising fish, and he was excited to start casting.  His fly landed just in the feeding lane of the fish and his stimulater bolted upstream.  “Lucas!” I yelled, and he set the hook! 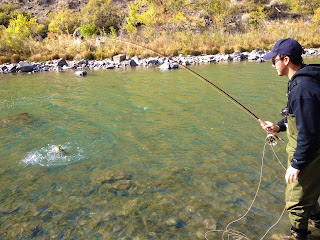 The fish thrashed, fighting Lucas!  Its head turned hard which brought Lucas’s fly rod down, almost straight, pointing at the fish. I was there to coach, “Let it run if it wants to, and keep your rod tip up.”   The fish tired fast, and Lucas lifted his rod handle over his head as I scooped his fish in for another great shot. 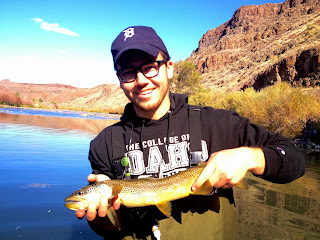 After two fish it was my turn, and Lucas stoood by to watch me cast.  On the bank there was another person watching me cast as well, a lady named Helga Jaques.  Helga, a painter, needed a picture of a fly fisher casting for her next painting.  Well I can do that, I thought as I started casting slowly for a nice shot.  Helga got what she wanted and thanked us before she took off.  I was feeling awfully proud of myself, and it didn’t help that I caught a fish soon after.  Lucas was kind enough to take this picture of me with my fish. 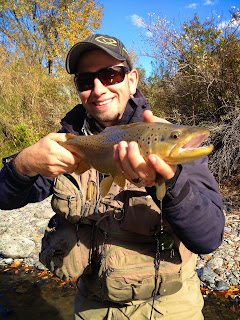 Though the fish were rising all around, I remembered what I was there for and helped Lucas when I could.  He ended up catching four fish for the day, and the last two were all by himself.  I felt that I was a good teacher for Lucas that day, and I’m sure the next time he heads out to the Owyhee, he will know exactly what to do. 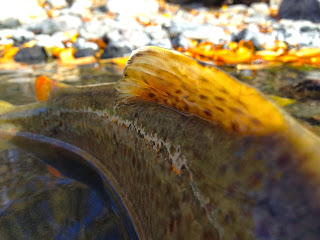