Skip to content
After a delicious breakfast, compliments of Pat Kilroy, my brother, Pat, and I headed out to fish the South Fork of the Boise River below Neal Bridge.  Snow was falling before we had even started heading up there, and by the time we hit the gravel road it was completely covered with snow. 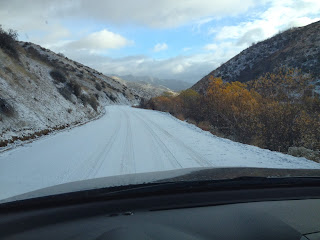 Personally, I love driving in the snow.  Everything seems to quiet down on the road, and the scenery is fantastic.
My brother, Feef, followed closely behind in his truck.  We took it slow and eventually made it to our location. 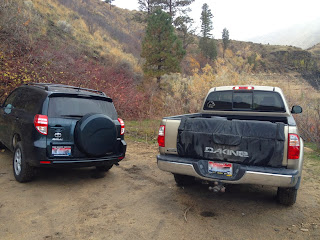 “I’m going to start out with a streamer.” Pat said as we geared up for our hike downstream.  My brother and I rigged our rods for some dry fly action.  “There should be a nice BWO hatch down here.” I told Pat as we finished rigging up, “and I bought a new leader just for the occasion.” 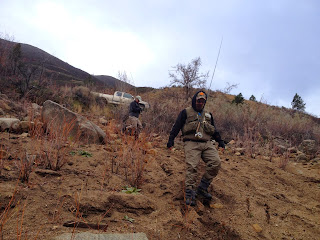 In almost no time Pat hooked into a nice 17” trout with his streamer.  I watched from afar as he released it back into the water.  I continued searching with a black stimulator, without getting any love.  For hours I pounded the water without so much as a look.  I met up with my brother further downstream, and he was having as much luck as I.  “I think I am going back up to the car to switch my rod.” I told him as I reeled in my line.  “I was thinking about nymphing.” He told me will a frown, “I HATE nymphing!” I ran up to the car and grabbed my 10’ 5wt to throw streamers. 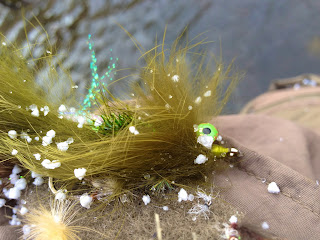 Little snowballs fell from the sky as I started stripping my streamer. “I love fishing in the snow” I said to myself as I watched it all fall around me.  Everything was so quiet except for the zipping sound my line made as I double hauled for a longer cast.  The snowflakes got bigger and fell much slower as I stood in the river.  I looked up to take in the sight; I stripped my fly in and lifted my rod tip up bringing my fly to he surface of the water.  Just then a fish took an aggressive strike, just missing my fly.  I dropped my rod tip in hopes the fish would still be there to take another swipe at my streamer, and sure enough it was.  Wham!  I set the hook and felt the glorious tug of a fish.  “Yeah!” I yelled as I brought in my first fish of he day. 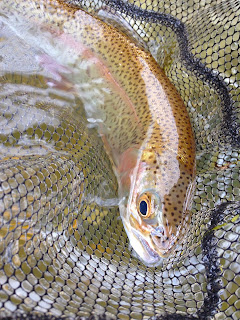 I let my fish go and looked for my brother.  “They started rising, Brother.” He yelled over to me as he got into position.  Sure enough, he was right; what was once a slow slick of water had become dotted with rings, indicating feeding fish.  Pat headed upstream while we headed down.  We could no longer see each other and I hoped he was seeing the same thing as we were.  I walked over to where my brother was casting to a rising fish. 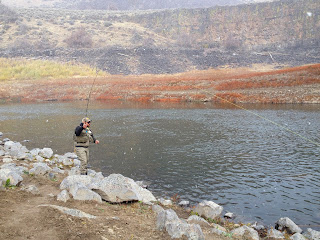 “He’s right here, and he won’t take my fly!” He said annoyed, keeping his eyes on the fish.  The fish rose again, “There he is!” I said. “Yep, I see him,” Feef said as he went to cast.  His fly drifted right over the spot where the fish had rose. “Eat my fly, fish!” He said, frustrated as his fly drifted over and over the rising fish. “Why arn’t you eating my fly?” “What do you have on?” I asked, “A BWO emerger.” “You should switch to an adult, size 18,” I suggested, after watching the fish feeding.  In silence he tied on an adult BWO, “there it is, now I’m going to get him.” He said with newly found confidence.  I went back to tying on my fly when I heard, “God damn it!” I looked up to see that his back cast had snagged some weeds behind him.  “NO! NO! NO!” he yelled tugging his fly rod away from the weeds, but his fly remained firmly stuck.

A fish had rose a few feet in front of the fish he was casting to, so I got into position and made a cast.  The fish took my fly on the first cast without hesitation.  “Boom!” I said setting the hook.  “I hate you, I hate you!” my brother yelled in protest to my success. 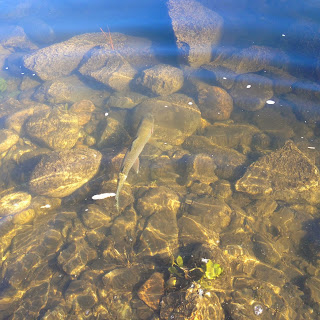 My fish swam off, and my brother was still after his – still rising – fish.  “This is it, this is going to be the one!” He cheerfully said as the fly fell in the feeding lane of his fish.  I stopped and watched as his fly, once again, drifted over the fish, untouched.  “WHY AREN’T YOU EATING MY FLY?!!!” I started laughing and said, “Let me see your fly.”  As he walked over to me I made a quick cast to a rising fish.  “Two for two!” I yelled bringing in a fish; I looked back at my brother and said, “Two for two, Brother!” “Yeah… that’s really great.” He scowled. 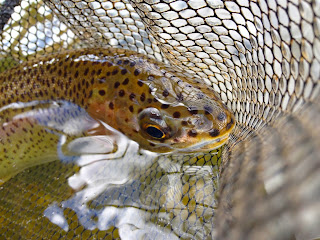 I released my fish and checked out my brother’s leader. “Well no wonder you aren’t caching any fish!” I yelled at him.  His leader was chewed up to about 2X tippet with about three inches of 5X tipped tied off of that where his fly was tied; it was only about four or five feet long.  “What were you planning on catching these fish with?  Hopes and dreams?” I said as I quickly extended his leader out to ten feet with the same fly I was using.  He was good to go, and we both started fishing again.  Another fish rose in my section so I casted out, and it ate my fly. 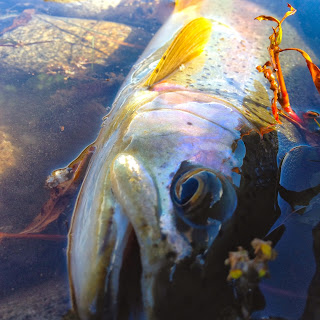 The fish my brother was originally casting to was long gone by now.  I was catching more fish further out in the river, so he stepped out to join me and started targeting the fish in front of him. “My timing is all off!” He yelled to me.  “Then time the fish.” I advised.  I am happy to report that Feef did catch a fish, however when he brought it in I asked him if he would like a picture. “No, this is a small one.” He said as the little thing darted off.  The hatch was over, and the wind froze our hands before we decided to head back.  We met up with Pat, who had brought in a few more fish with his streamer; some were even bull trout, he explained, as we set off back home. 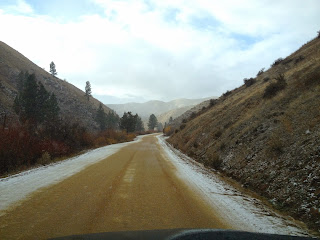 The muddy roads reminded me of pumpkin pie with whipped cream as we headed out of he canyon.  I enjoyed Pat telling me about his experience on the water as we drove out in the light snow.  We reached a great lookout point on the road, overlooking the South Fork of the Boise.  “Lets stop here and get a picture.” Pat suggested, bringing out his camera. 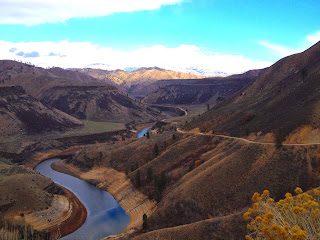 The shot turned out great, and it was just another reminder of how much we love this fantastic river.  Next time I will head back to the South Fork to help the local Trout Unlimited chapter plant cottonwood trees around the tributaries; much needed nurturing since the recent fires.