Skip to content
“Where did you find that?” I asked as my brother, Kris as he pulled out a monster peanut butter cup.  “At the gas station.  I thought it would be a good treat for the road!” He said very excitedly as he handed it to me.  The thing must have weighed about half a pound and was about the size of a pot pie.  I broke it up in four pieces and we all shared it.  I was only halfway through my quarter slice when I said, “There is no way I could eat one of these by myself.” “Tell me about it.” My brother said, “I ate one by myself.” Ryan and I looked at each other in amazement as my brother finished, “and I was sick for a few days.” 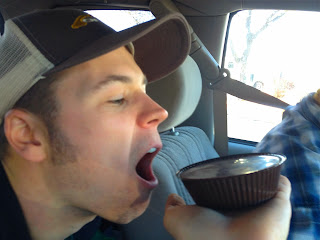 The three of us headed down Blacks Creek Road toward the lower section of the South Fork of the Boise River.  Today was a special day because I had a Tenkara rod to try out.  I have always been curious to try one, so I pulled it out as we geared up.  I also brought my Helios 2 (H2) just in case. 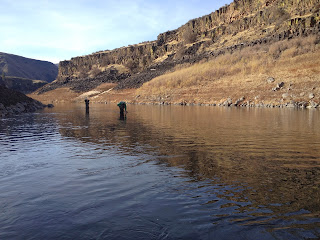 The water had risen since the last time I was here, so we walked up stream where we saw a large number of rising fish sipping BWOs off the surface.  I set the H2 down as I crept up on some fish to position myself within casting distance.  Twenty-four feet was my limit, and when I got to where I needed to be, the fish stopped rising.  I stood there for what felt like an eternity, waiting for this fish to start rising again.  Just out of my reach were seven to ten fish steadily rising, which would have been an easy cast with the H2.  This is stupid, I thought to myself as I watched the feeding frenzy take place.  Both Ryan and Feef were catching fish with Western style rods.  My fish rose again to recaptured my attention.  With a flick I made a cast.  Not exactly accurate, nor was it drag free, I thought as my fly drifted toward where the fish had rose.  I made another cast, and this time my fly landed where I wanted it to land.  With the slightest disturbance, the fish ate my fly. 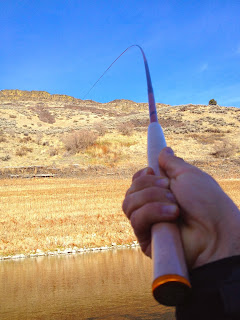 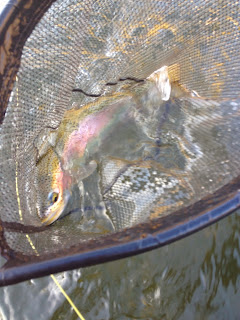 There, I caught one with the Tenkara rod, I thought as I almost ran back for the H2.  With a real rod in my hand, I hammered the fish.  They were all 13 to 14 inch cookie cutters, but fought like crazy and were very acrobatic.  The three of us were yelling and laughing as we caught fish after fish.  The stillness on the water echoed our excitement. 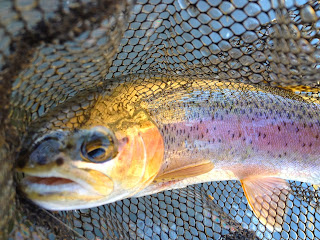 After a number of fish, both Ryan and I broke out the Tenkara rods for another go.  “Be sure those telescoping sections are nice and tight, Ryan.” I said before he made his first cast.  These Tenkara rods are not the strongest things on the planet, and breaking one was the last thing I wanted to do.  A fish rose, and Ryan made a few casts out to it.  After taking a few steps closer, the fly was in position, and the fish took! 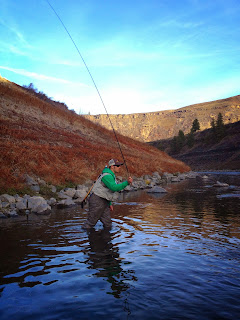 “Whooooo hoooo!” Ryan yelled ans his fish leapt out of the water. “This is the biggest one yet!” 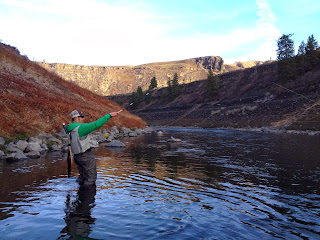 The fish tore off upstream, and with no line to give, the big fish of the day broke off.  Ryan was less than thrilled.  As if to rub salt on the wound, Feef yelled, “That’s what you get for fishing Tenkara… Stupid..!”
“Hey!” I yelled back in protest.
“What are you talking about, Erik?  You broke yours!” My brother was right.  On a simple cast, the second section of my Tenkara rod had snapped only moments before. 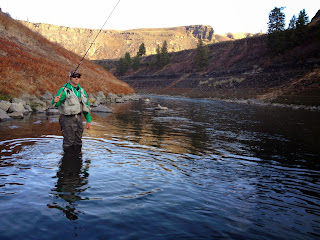 On the way back home we argued.  “Perhaps It was not the best place to try it out?” “Maybe we should take it to a small stream?”  “It does offer us a good dry fly challenge.”  “They said we could fish it on the South Fork.”  “It would help if I had a third hand to bring in the fish while holding the rod, line, and the net!” These were all great questions and suggestions we had while discussing Tenkara.  Mid-conversation, a black object running in the road caught my eye.  “A dog!” I yelled warning my brother so he wouldn’t hit the black figure.  I looked behind us to see another truck close behind. “They are going to hit it!  STOP!”
Feef brought his truck to a quick stop, but not before I had opened the door and jumped out.  A sharp whistle brought the dog over to me, and the truck behind us slowed down as it drove by.  A wagging tail quickly made things less on-edge as the dog approached.  “What are you doing out here?” I asked the dog, as it panted.  I brought the tailgate down, “Up!” I yelled, and the dog obeyed.  I cleared a spot for it to lay down before I got back in the cab.  We took off, with Ryan keeping an eye on it through the back window.  “I hope Gracy’s not going to be mad.” I said as we drove home. 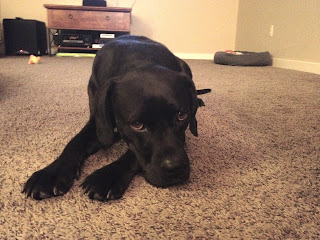 I called Gracy to let her know I found a dog, and she was happy that I had picked it up.  We gave him water and food and even made a bed for him in the house.  He was well-trained, clean, and obeyed commands very well, so he got to sleep inside.

The next day Gracy took him to the Humane Society, and was given a reference number to keep tabs on him.  If it boiled down to it, we were going to end up with a new dog.  However, I am happy to report that his parents came and claimed him, and his name was Buddy.  It was great news for both Gracy and I, and despite some of the flack I got for picking him up in the first place, I would do it all over again.