Skip to content
On the way home from a successful deer hunting trip (fun story), Ryan Spillers and I stopped on the South Fork of the Clearwater to do some steelhead fishing.  It was very early to be expecting steelhead on the South Fork but, as ridiculously optimistic fly fisherman, we had to check it out. 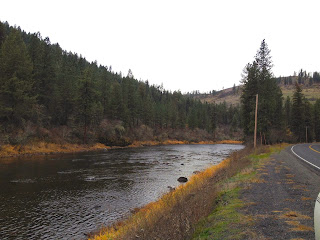 I couldn’t find the correct switch line for my rod before we left Boise, so I ended up pairing my 5wt switch with a 10wt fly line.  It may sound a little far fetched but, in theory, it should work because the head of a switch line is dramatically overweighted to the rods weight, allowing for easy two-handed casting. 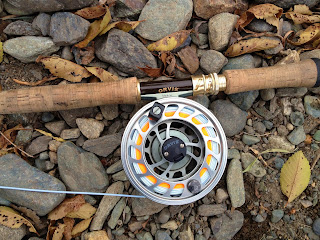 The switch line peeled off the water as Ryan made his first cast.  I soon joined him and was casting, with my theorized set up, better than expected.  We worked a section of water before we decided to move on.  Though a steelhead is the fish of a thousand casts, after about 50 we were ready to go. 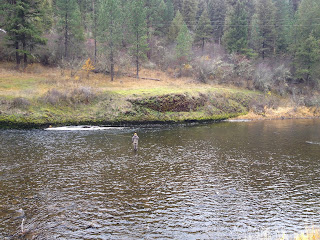 “I think it would be smarter on our part if we stop fishing here and head to the salmon river.” Ryan said as we got off the water.  Our time was limited, so we had to make the best of it; fishing the South Fork of the Clearwater right now was not making the best of it. “Sounds good to me.” I replied, and we jumped in his truck and drove the hour and a half drive with our waders on. 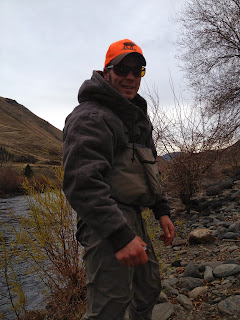 We stopped to fish downstream from Riggins, and once more had no luck.  The wind was picking up, which faltered the performance of my fly line.  Our last chance for a fish was thirty minutes up stream on the Little Salmon River. 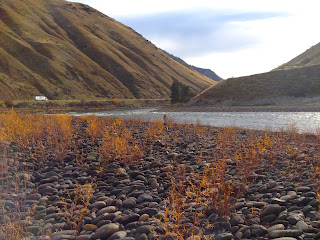 It’s a good thing Ryan was there, because I know very little about places to fish for steelhead.  He picked a location, and we jumped out of the truck ready to fish.  We each picked our spot and I couldn’t have been happier to have a switch rod.  On the Little Salmon there is very little room for a back cast, and the heavy line of a switch allows for easy water loading.  This means there is no need for a back cast!  I launched out my fly and looked upstream just in time to see Ryan’s eleven foot switch bolt to the sky! A steelhead thrashed in the water as Ryan’s rod arched and bobbed with a fish.  Before we could celebrate, the fish turned and the switch rod sprang straight, lifeless.  Damn, I thought as Ryan stood on the bank looking out into the river. 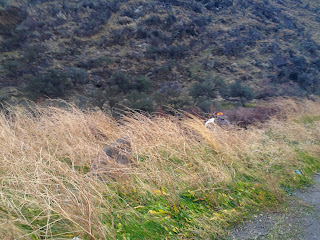 The wind was howling, and a thick shrubbery blocked my view from completely seeing Ryan.  All I saw was an orange hunting hat turning left and right, and every steelheader knows why: did anybody see that I hooked into a fish?
Yes Ryan, I did see that you hooked a fish.  Sometimes that is all the action you get when steelhead fishing for hours; a bump, a pull, a long distance release and, as trustworthy as fly fishers are, we never believe one another.

I didn’t hesitate long before I launched another cast, this time much further out.  A nice mend helped the drift of my fly, and in less than a second, my indicator was pulled underwater! My forearm braced the long extended handle as I set the hook.  I watched in amazement as my indicator started swimming up stream, and the forceful TUG TUG TUG of a steelhead tested my rod!  “Ryan! Ryan! RYYYYAAAAN!!!” I screamed with excitement as chrome flickered underwater.  Ryan ran over faster than a chicken on a June bug screaming, “ERRRRRRIIIIIK!” He stood ready with the net as I brought the steelhead close to the bank.  My rod doubled over as I applied torque, bringing the fish closer to Ryan.  “Get him Ryan, get him!”  Ryan thrusted his hand in the freezing water to get the net under the fish and lifted. “Yeaaaaaaa!” I yelled, as I saw the steelhead securely in the net! “Woo Hoo!” Ryan added scrambling away from the freezing water. “My first real steelhead!” 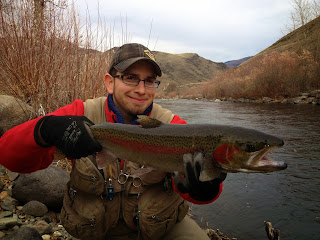 Confidence boomed after that fish, and we went right back to fishing.  We stayed longer than anticipated in search for another steelhead, but mother nature had something else in mind.
The temperature had dropped significantly, and the strong gusts of wind were freezing my face.  I reeled in and ran back to the truck to discover that Ryan was way ahead of me.  My fingers and face were frozen as I geared down and got into the truck.  The truck would get blasted by wind, causing it to slightly rock.

“Well, good job, Erik.” Ryan said as we drove off, “You have deer and steelhead to take home to Gracy.” “She’s going to be happy, I never bring home fish.” I replied, adding, “I would have let the steelhead go if you weren’t here.”
“It’s a hatchery fish, Erik. We needed to get it out.” Ryan added to make me feel better.  “I know,” I said, “but I would still rather kill a deer than kill a fish.” Ryan laughed at this, “I killed your fish, Erik!” “I know, I’m just saying… It was probably a good fish.”  Ryan looked over at me and said, “It probably was.”

2 thoughts on “Cast and Blast”