Skip to content
I have wanted to fish with Jim Kazkoff for a while now.  After all, we have been working on the Western Idaho Fly Fishing Expo committee together for the past two years.  Jim was the chairman of the Expo last year and has resumed his position this year, along with a fantastic team of individuals… and me.  Jim has also been helping me develop my resume in the quest for a “real job.”  It was about time our schedules allowed us to end up on the river to fly fish at the same time.  We ended up on the South Fork of the Boise, below Neal Bridge, in search of the BWO hatch. 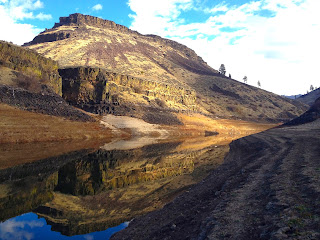 It was a very calm, crisp morning as we descended down into the canyon.  The water reflected the rocks and sky as if a mirror were in its place, and the faint dimples of rising trout distorted the picture.  The water had seriously risen since a few days previous, so we had to walk up stream to find running water.  Jim’s buddy, Tom, who drove us to the location, was also ready for the hatch.  Both had never fished this spot before and were eager to check it out.  I recommended a streamer at first, and it wasn’t more than a few casts before Jim hooked into the first fish of the day. 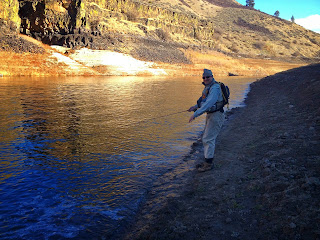 “Awe, man, its a Squaw Fish!” Jim yelled as he quickly released his fish.
“That means it doesn’t count.” Tom added quickly.  It was shortly after Jim’s fish when Tom brought in the first rainbow, adding, “First rainbow.  It counts!” Jim quickly went back to fishing, and hooked another fish, perhaps this time a trout.  “Another Squaw Fish?!” He said disappointedly, “Why am I only catching Squaw Fish?”
“I don’t know Jim, but if I were you, I would be happy with any fish I caught.” I said, adding to the burn.
“That’s probably true.” Jim said with a chuckle. 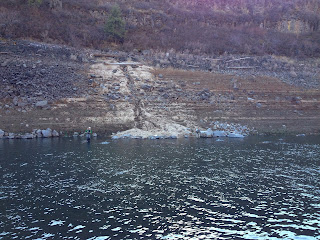 The BWO hatch had yet to take place, but I walked further upstream anyways, looking for some rising fish.  I had tied on my RS2 BWO pattern for an unsuspecting fish, and sure enough one rose.  With my fly ready I presented it out to the fish without hesitation, and it took. 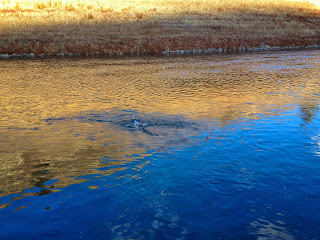 First rainbow on a dry fly, I thought as I brought in my first fish. In the distance we heard a thumping sound.  Thinking it was another log truck passing by on the road above, two Apache choppers suddenly shot from around the canyon wall in formation.  The booming sound of their blades shook the canyon walls and created a pounded in my chest.  That was cool, I thought as I went back to fishing. 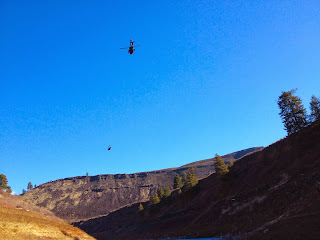 The BWO hatch was in full force now, and fish started rising everywhere.  I was picking off fish left and right when the wind picked up.  White caps crashed on the surface, making the river look like it was moving upstream.  Trying to make out a rise in all the commotion was nearly impossible.  Jim came to fish with me and we both waited for the wind to die down, which it finally did.  The water was glass once again, and the fish were back to eating BWOs.  Jim casted out to a rising fish, that was practically in arms reach, and nailed it. 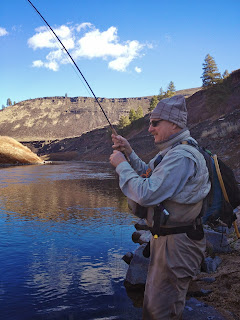 We both took turns casting and catching rising fish.  The wind threatened to rear its ugly face, but thankfully died down.  The hatch did not disappoint, and when it was over we went back to throwing streamers.  Once more we heard the familiar sounds of a chopper approaching.  We all stood and looked up as a black hawk did a fly-by below the crest of the canyon. 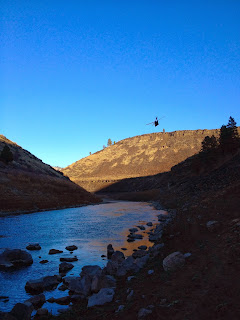 “They must be practicing.” Jim said looking up at the chopper.  The temperature had noticeably dropped, especially after the canyon’s shadow covered the water.  We decided to call it a day and head back.  On the way out Tom was flipping his streamer out and catching a few fish. “This was a nice spot.” Tom said after releasing his fish.
“I agree. Thanks for suggesting we come here, Erik.” Jim added as we made it to the top of the canyon.
“I’m glad you guys liked it.  Just think of the spots I’m not telling you about!” I cheekily added.
“We must not be that good of friends yet!” Jim said laughing. We drove off and made it back to Boise with daylight to spare.  That’s not the norm, but my good buddy, Ryan, was giving a talk to Trout Unlimited about his Alaska experience and we didn’t want to miss it.