Skip to content
“Yellow!” Travis Swartz said when he picked my phone call.
“Orange, green, pink.” I replied.
“What?” He asked.
“Well you said, Yellow, so I said Orange, green, pink…”
A small moment of silence gapped the conversation, probably to get past the stupidity of my joke, before Travis replied, “Why don’t we leave the comedy SAFELY and SECURELY in my hands!?”
“I’m just calling to tell you that I’m a bad friend.” I said.
“What now?” He sighed.
“I am headed to the South Fork, and I forgot to invite you… I’m ten minutes away from Mountain Home.  Sorry.” I said.
“On any other day I would agree that you are indeed a bad friend, but I am a worse friend.”
“Why is that?” I asked,
“I’m already in Mountain Home!”
“Whaaaaaat?!”
Travis was on his way back from Eastern Idaho, and had decided to stop to fish the South Fork before heading back home.  After a quick conversation, we decided to meet up on the river to fish Travis’s secret spot.
I arrived in time to see a fish leaping out of the water that Travis had just hooked!  I parked and leaped out just in time to hear, “Erik!  Do you have a net… BIG FISH!”
“Yeah!” I yelled back, and quickly brought my net to Travis. 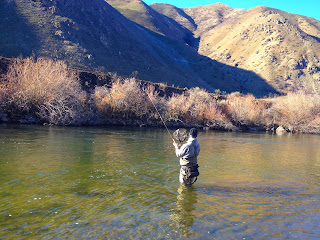 “What happened to your net?” I asked.
“Lost it.” Travis replied, “While I was fishing a few weeks ago.”
I asked, “Would that be the net that was worth $130, to which I suggested you buy a security magnet so you don’t lose it… but you said that $35 for the magnet was too expensive…?”
“That would be the one!” 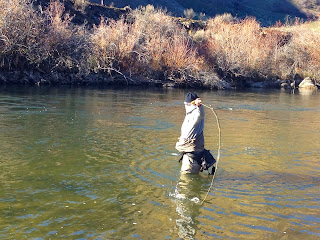 I watched as Travis did everything he could to lose his fish.  His funky landing techniques, that I can honestly say I have never seen, were unorthodox but effective.  Travis brought in his fish, and held it up to for the camera.  “What do you think Erik… 27, 28 inches?”
“Yeah!” 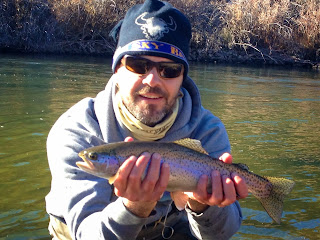 I ran back to gear up, and quickly joined Travis on the water.  Like he said, the fish were rising all over the place; however, the only big fish was the one Travis brought in when I showed up.  The other fish were little shakers. 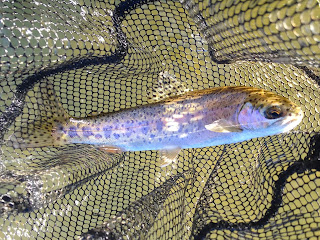 I looked back and saw that Travis was hooked into a fish. “Big fish!” Travis yelled, “Big fish just got away!”
“Oh yeah?” I said.
Travis continued, “It was 30 inches… just came up and ate my dry fly.” 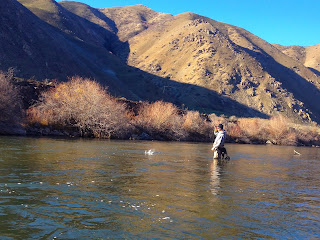 We fished for a few hours together before it was time for him to take off.  I also decided it was time to find a different spot, so I picked up and drove downstream.  The river had definitely changed in the aftermath of this summer’s fire.  I stopped to watch a small section of water, and found some steadily rising fish.  These are going to be tough fish to cast to, I thought to myself, remembering the deep trench that ran along the bank in this section.  Oh well, I thought as I made my way down to the water’s edge. 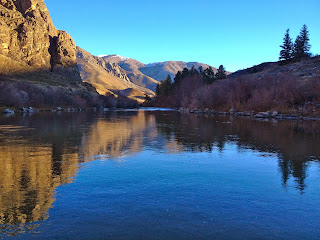 The water was glass smooth, and to my surprise, the once deep trench was now filled up with sand.  That’s nice, I thought as I maneuvered out to make a good cast.
“Look, there’s a fly fisherman!” A child’s voice echo off the rock walls.  I looked up to see a father standing with two kids watching me.  The fish were still rising in front of me. Well I better not disappoint.  I laid out a nice cast, presenting the fly ever so delicately.  The fish cooperated nicely by taking my fly on the first cast.
“He’s got one!” The young voice boomed, as my fish put on a nice display of jumps and thrashes before I landed it. 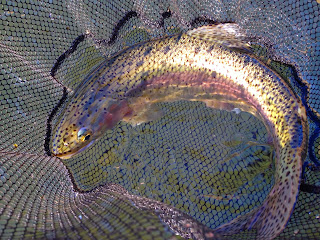 I was now standing ankle deep in the very spot the trench would have been, making my cast even better.  Time flew by as I brought in fish after fish, each displaying its own style of acrobatic abilities.  Before long I had to get going to meet up with some other friends on the river.  As I made my way back to the bank, I realized I had accidentally snuck up on a fish!  I stood there and watched it as it stayed almost motionless.  More time flew, as I couldn’t believe how close this fish was letting me get.  Finally, after getting WAY too close, it shot off like a torpedo. 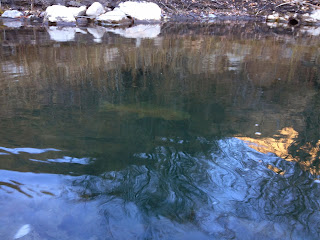 Campground N is where the guys said to meet up for the annual ‘Sacrifice to the Fish Gods’ ceremony.  I was greeted by Dave Gourley, “Erik! Remember that Sage rod I just got back after I broke it?”
“Yeah.” I replied.
“It’s broken again!” Dave said. “First hour I was here!”
“Oh no!” I chuckled back to him.
I ended up letting Dave borrow one of my fly rods, and he immediately started fishing. One of the guys came up to me as Dave started casting, and said, “You realize he’s just going to break it, right?” 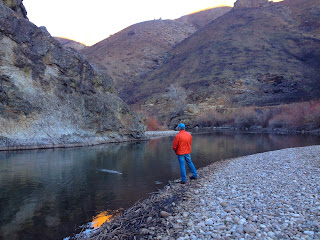 It’s amazing what some blue-collared fly fisherman can come up with for grub.  We all enjoyed smoked ribs, meatballs, homemade macaroni and cheese, beans, corn, cookies, and a prize wining pumpkin pie with homemade whipped cream on top!  Even with ten of us, there was way too much food.
Dave built up the fire after dinner, “FIRE! I’ve created fire!” He yelled, holding up his hands to imitate Tom Hanks in Castaway.  “Great movie…” Dave continued, “Why would you want to leave the island?  I bet there would be great bone fishing!” 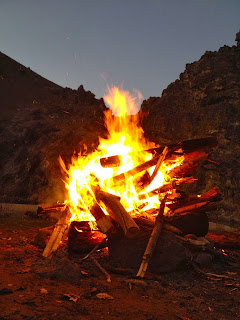 Everyone was quiet as we circled the fire to offer up our sacrifices.  Something near and dear to each of us was thrown into the flames.  I knew a few of the guys who showed up, and most of them take this offering very seriously.  A few funny words were said, along with more heartfelt and honest sacrifices; and for the fifth time, I introduced myself to White Fish Ed, who sacrificed a few hats to the fire. 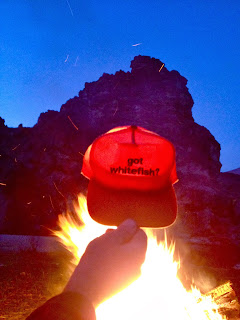 I learned about some of my fellow anglers, and how much the South Fork of the Boise means to them.  It’s nice to have been, and continue to be, apart of a local organization who put forth time and money to restore such a great river.
With all the sacrifices and fellowship that surrounded the fire that evening, a flicker of fire erupted displaying a figure dancing in the flames.  We believe it to be a Fish God. 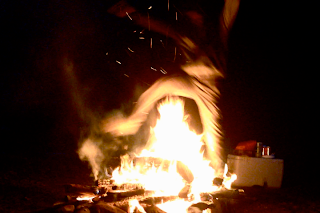 9 thoughts on “Sacrifice to the Fish Gods”