Skip to content
Believe it or not, I discovered Rocky Ford Creek after I had moved to Boise and became a fly fisherman.  In retrospect, I had complained often that there was nothing to do back home, and boy was I ever wrong! 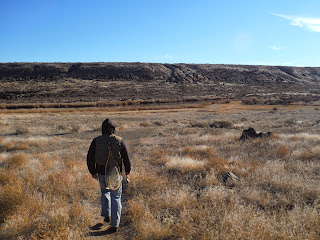 Feef and I were happy to return and fish the creek the next day, and we didn’t waste any time getting there.  We immediately started casting our streamers out to hungry fish, and it wasn’t long before I heard a loud SNAP!
“You have got to be kidding me!” I said as I dropped my head.
“Sorry, Brother.” Feef said, as he stood there with his leader in his hand, and no fly…
“Well I hope you have a streamer.” I said.
Feef stood there looking pathetic before I dug out my box, took out  a Dalai Lama, and held it out for him to grab.
“Well, throw it over here!” He said, rather sternly.  So I held out the fly, and dropped it at my feet.
“That’s messed up, Brother.” Feef said. 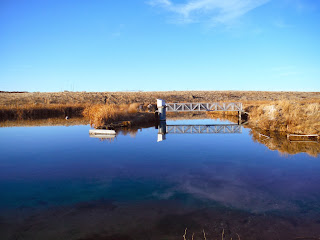 I picked up the fly and tied it on to his leader, ensuring a strong knot, and we went back to fishing.  I was soon into a fish but I didn’t bother asking for help, as the fish was only about 18 inches:  small by Rocky Ford standards. 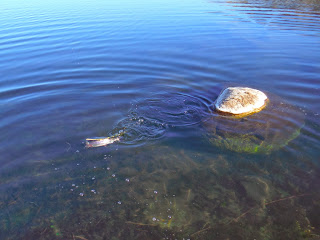 Everyone we came across on the creek was in a very chipper mood, and rightfully so; it was Christmas Eve.  Anglers all over were showing us their flies and the technique to fish them.   Knowledge like that would definitely help me in a pinch, but for the time being we continued with big streamers.   Feef’s casting was getting better and better.  He easily added ten to fifteen feet more to his distance in a short amount of time and with little instruction.
“Oh, I got a big one!” Feef yelled as he lifted his rod tip.
“Did you see that last cast?” He asked, as I reeled up to help him.
I had seen it, and it was easily a 70 foot cast.  With a Dalai Lama, that’s an accomplishment. 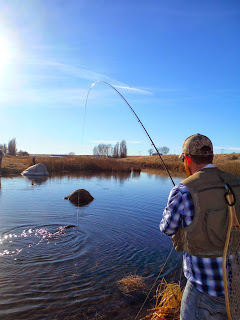 “I saw the wake as it came over to eat my fly!” He said enthusiastically.  The fish wasn’t disappointing us, and put up a nice fight along with a few thrashes of its big head, stopping some fellow anglers to watch the excitement.   I quickly came to net his fish, and as I dropped the net in the water the fish made another run.
“It doesn’t want to come in!” Feef growled happily, as his reel screamed to life.
“I almost had it!” I said, regaining my posture.  The fish’s second run was far enough for Feef to regain the fight on the reel this time.  He brought it back to the bank, where I was waiting with the net.
“Uuuug! He won’t come in!” Feef said as his reel zip, zip, zipped with every tug of the fish.
“Stand behind me.” I said, as I now laid on the ground to reach out as far as I could.  Feef took a few steps back, and the fish was not up for another run.  He lifted his rod high, and I slipped the net under the fish.  The fish felt the net and thrashed like hell!
“Yeaaaaah!” Feef yelled, as he settled the fish, and held it up for a nice picture. 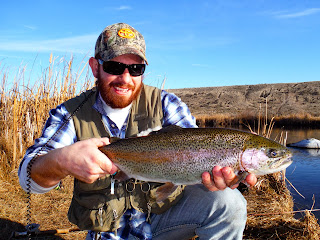 “This is a nice one hu, Brother?” Feef asked me, as he admired his fish.
“Yeah!” I replied.  It ended up being 23 inches.  The fish shot off back into the creek, and Feef stood, awfully proud.  We both walked to another spot that we hadn’t fished before, just to try it out.  I casted out, and my fly landed perfectly on the glass-like surface of Rocky Ford with not so much as a splat.  When throwing streamers, you don’t just let your fly sit there, so I started stripping it back slowly.  The sudden jolt of a fish caused me to lift my rod, and then there was nothing.  Damn, I thought as I casted again.  This time, I saw the wake of the fish, as it sped over to eat my fly. Steady…, I thought, then Wham! Fish on!
Fish off… “What the hell!” I said as my line went slack.  That felt like a good hookup, I thought as I brought in my line, but was immediately interrupted by the sounds of a thrashing fish.  I looked downstream to see Feef bringing in another one!  By the time I reached him, he had the fish in his net, and quickly held it up for a picture. 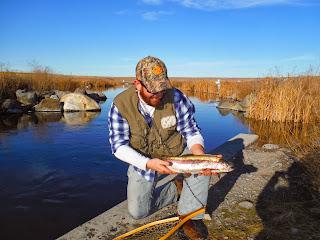 “I’m doing way better today!” He said, full of confidence. “Well, what about you?” He asked, referring to my lack of success.  How kind of him to notice, I thought as I smiled.
“I keep losing them, Brother.” I explained, “I get the hook up, but then they get off.”
“That’s the same thing that was happening to me yesterday!” Feef said as we looked up to see my dad walking over to us with cheeseburgers and fries.  The meal of champions! 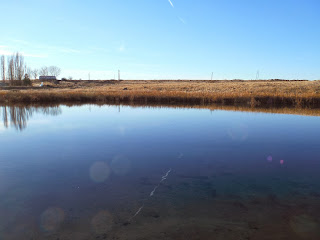 I stood on a small hill looking into the creek as I rocked my fly out further than ever before.  The hill made it easy to backcast, and there was little here that could snag my line.  I watched my fly as it swam back to me, when a wake appeared! The fish came out of nowhere, and hit my fly.  From where I was I watched the whole thing happen, but it only hit to stun my fly.  My arms jolted, but remained down, as I kept stripping the fly.  In a shot, the fish turned 180 degrees, and bolted at my fly again!  It ripped at the tail, and I felt the bump of the fish.  I strip-set the fly, and it shot out of the fished mouth.  I could see my fly, which looked like it was almost three feet from the fish; not to mention, much closer to me.  This fish was pissed!  It charged at my fly leaving a silt-cloud trail as it bolted over.  In less than a second the fish grabbed the tail of my fly and shook it vigorously, and when it let go, my fly was now traveling to my left.  Instead of stripping I wiggled my fly rod, giving the Dalai Lama some new action; it was so close I wouldn’t dare bring my fly any closer.  The fly danced awkwardly, not moving in any direction.  The fish moved closer, and my fly disappeared.
One sturdy strip was all it took!  Thrash! Thrash! Thrash!
“Yeah!” I yelled, as I called Feef to help.  He came running, and had his net ready.  Feef made noises of excitement that sounded like a mixture of dub-step music and a barking dog.  I couldn’t help but join! 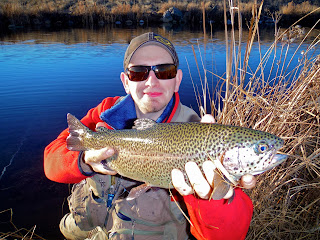 That was one of the best looking fish I have caught at Rocky Ford, and it was well deserved after all the long distant releases I’d had.
Time was flying as we walked and fished the part of the creek we had run through the previous day.  Both of us were getting into some nice fish along the way, one in particular was the smallest fish I had caught at Rocky Ford.   Feef was definitely sticking his fish today.
“Today is my day, Brother!” He said happily, while bringing in another fish.
“I can’t think of a better way to spend a Christmas Eve!” He added, as I came over to help.
“I know what you mean, Brother!” I replied. 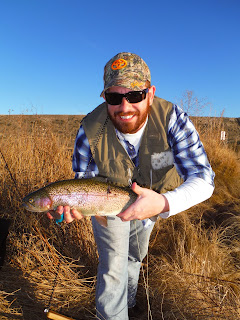 The sun was fading fast as we approached the pond that held the 26-inch fish of the day before. 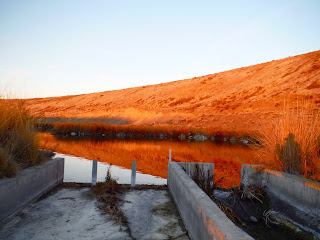 Both Feef and I fished it hard with no luck.  Tyler Steffens, an old high school friend and recent fish bum, came to fish with us the last 45 minutes of the day.  Tyler lives in Ellensburg, WA, and works at the local fly shop there called The Evening Hatch.  His main fishery is the Yakima River, where he is more likely to run into wild trout, fishing from a drift boat. 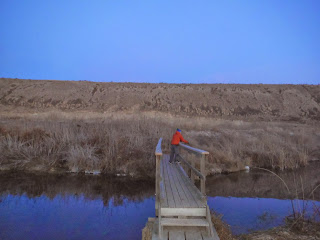 The cold was quickly creeping up as the sun faded.  The crispy sounds of ice slipping through my guides was getting louder and louder.  We all wanted to catch the last fish of the day, so we continued to pound the water.  The deck made for a great place to shoot my line out, and with every double haul I could hear the flapping sound of the Dalai Lama soaring overhead.  I wasn’t paying attention to my retrieve, because it was nearing the end of the day, and we had to get going soon.
Slam!
“BROTHER!” I yelled out into the direction Feef and Tyler. “I got one!”  This fish took me completely by surprise, and suddenly I wasn’t cold anymore.
“Brother, hurry!” I yelled out.
“I’m coming!” Feef yelled, I could hear the rustle of freezing grass as Feef approached, then the clacking of his boots on the boardwalk.  He unhooked his net, and laid down on the deck to net my fish. 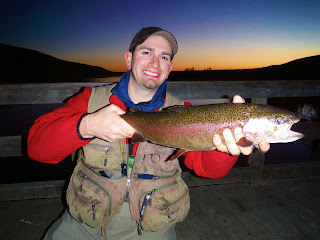 “That’s a nice fish there, Erik!” Feef said, as he snapped a few picture.  We both knew it was time to take off; we were happy Tyler took the time to fish with us, even if it was only for a few minutes.  We followed Tyler to the nearest gas station. He had drove out to meet us on an empty tank, and his gas light had been on for a while.  After he filled up, we went off on our separate ways to spent Christmas Eve evening with our families.