Skip to content
My brother just graduated from Boise State with a B.A. in Construction Management, and in no time at all, was hired by TIC and is moving to California.  It all happened so fast.  By the time we got back from Moses Lake and scheduled a fishing trip, we knew it was going to be our last. 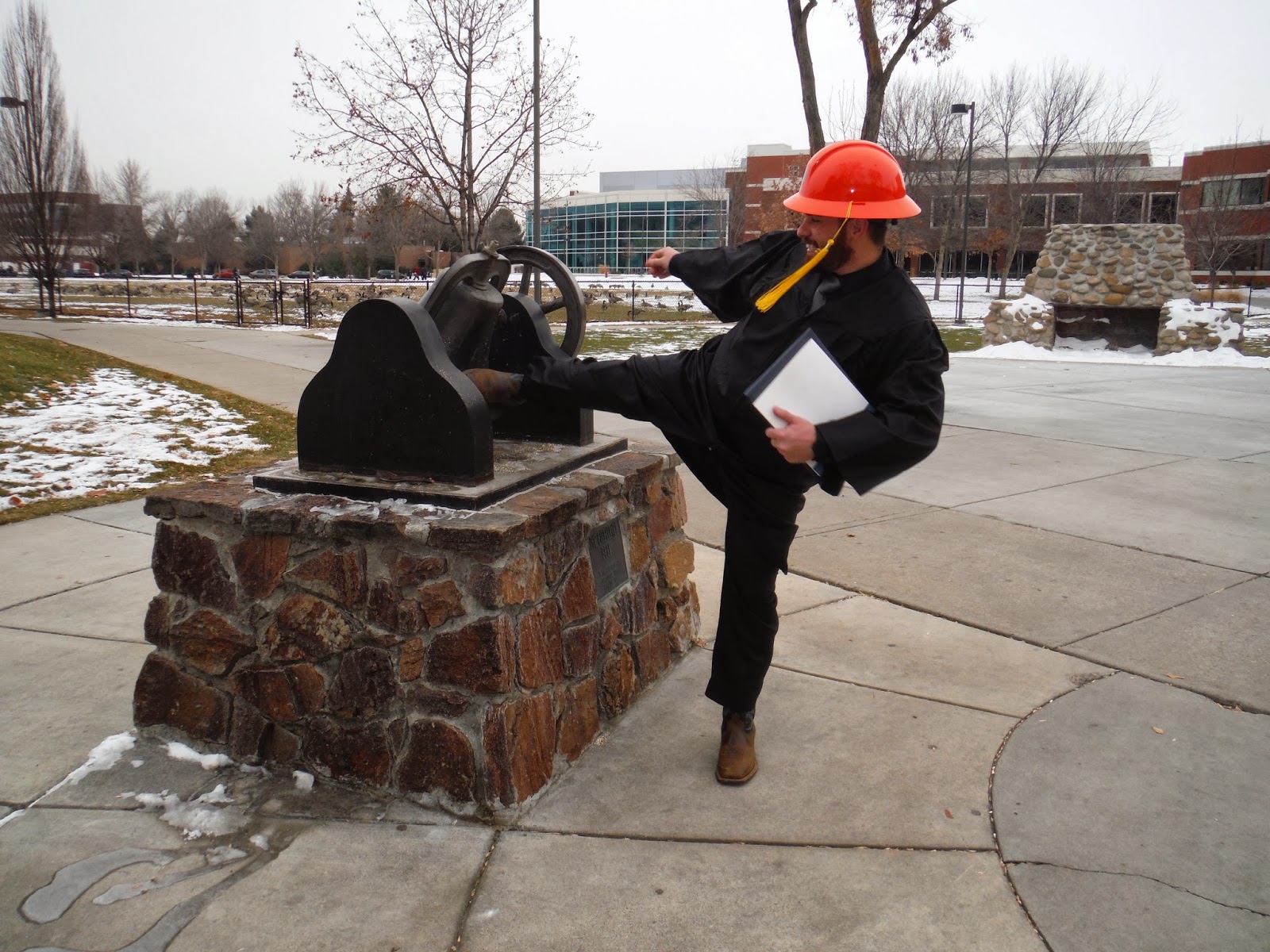 Feef always wanted to fish with the infamous, Hank Patterson, and would pester me for not making it happen.  Schedules never worked out for the three of us; he was very bummed about that.  Which is why I saw him pull into the parking lot with a smile, easily visible through his windshield, because standing waiting to fish with him was Travis Swartz, AKA, Hank Patterson! 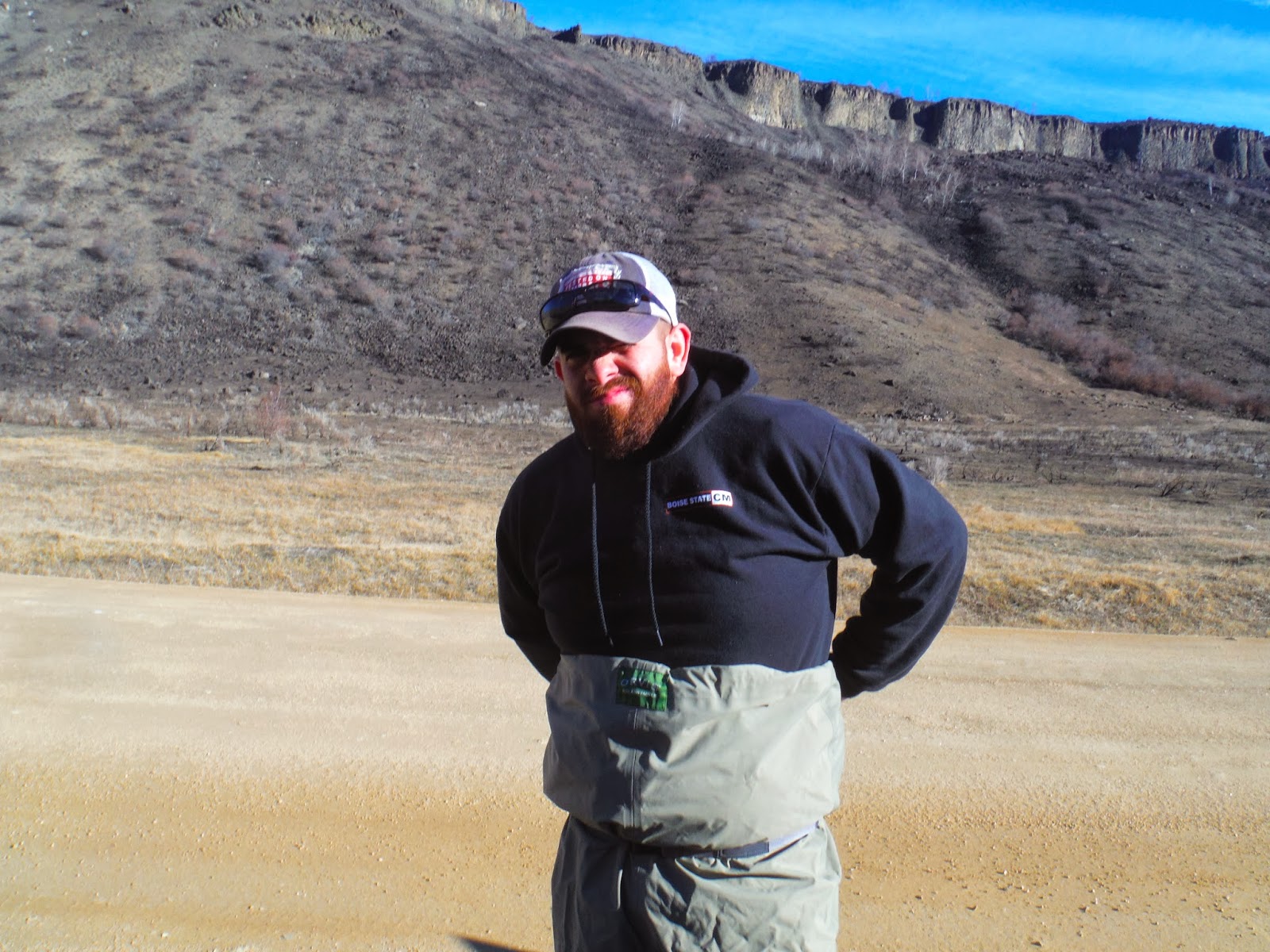 After helping a lady start her vehicle with a jump, we found ourselves at the South Fork of the Boise River on a beautiful day to fly fish.  Small Fry, Colton Schofield, also joined us to fish.  Colton started working for Henry’s Fork Anglers last summer, and has become a phenomenal angler. 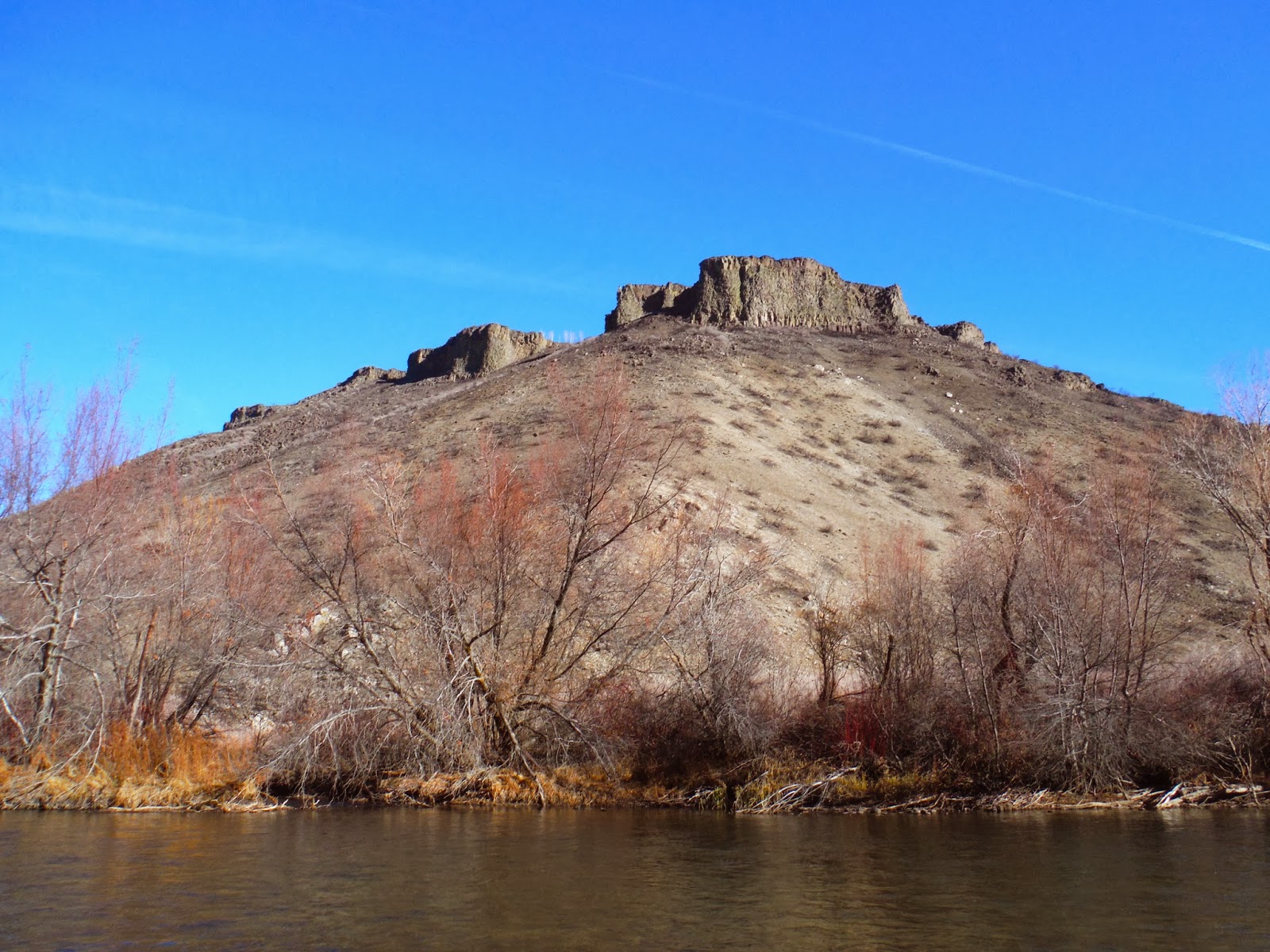 I had my heart set on dry flies, but with no rises, I tied on a streamer.  I walked downstream with not so much as a bump.  After spooking a Blue Herron, I walked back upstream, and ran into my brother.  He wasn’t doing too hot either. 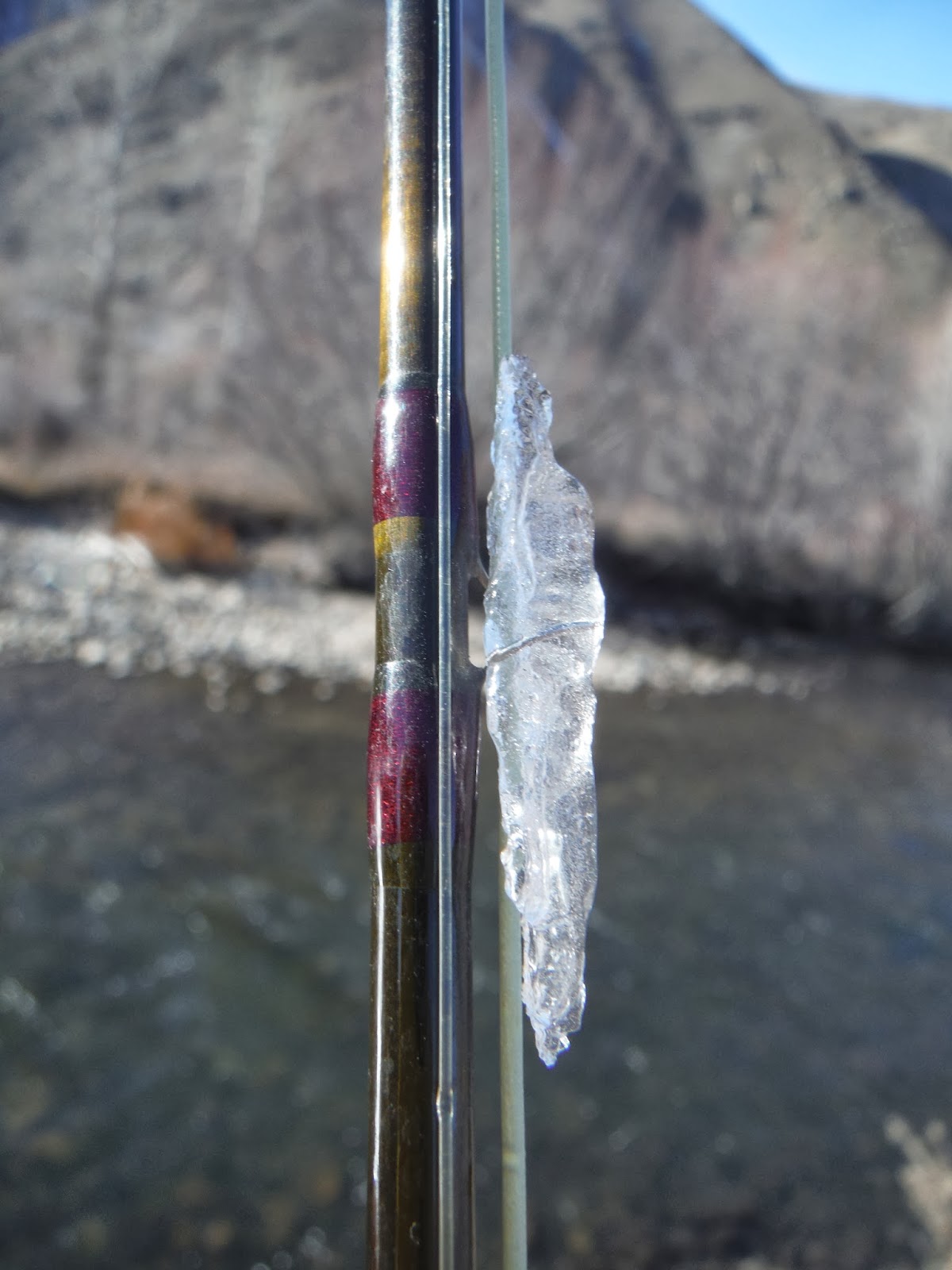 Feef and I walked back up to meet up with Colton, when a white truck pulled up right next to me.
“What are they biting on!?” The driver said. I looked over, and recognized fellow Boise Valley Fly Fisher and friend, Nick Coe.
“Worms!” I said back to him, without missing a beat. “With a marshmallow!”
“Cheese flavor?” He asked.
“No.  Baked potato with butter, onions, bacon, and glitter!” I said.
We both laughed, and Nick shrugged saying, “Well, they are Idaho fish.” 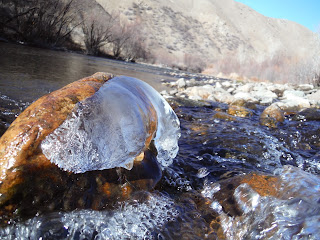 Nick hadn’t had any luck either, and he joined us as we met up with Colton, to drive to the next spot.  Travis had moved up stream, so we drove up to find him.  As we pulled up, we noticed that Travis was bringing in a fish.
“Oh God, we’re never going to hear the end of this.” I said as we all stood there and watched as he brought in his fish.  I know Travis well enough, that when it comes to him and fishing, he loves a crowd.
“Big Fish!” Travis yelled, “Huge! I’m not sure I can net it!”
We were far enough away, that he couldn’t hear us talking, especially my smart remarks.  Like crabs in a bucket, we started putting him down.
“It’s not that he can’t net it because it’s big, it’s his lack of coordination.  His mother dropped him, you see…” The guys started laughing, as Travis continued.
“I may need help!” He yelled.
“Yeah, mental help.” I said as we watched.
Travis netted the fish, and was getting the hook out of its mouth.
“Getting that hook out would probably be easier if the barb was pinched.” Nick said, as we all continued laughing.
Travis released the fish, and joined us.
“Any luck?” He asked.
No one replied.
“Well, at least some of us are catching fish.” Travis said with a sigh. Truth be told, when it comes to smartass remarks, toe-to-toe, the four of us would be no match against Hank Patterson. 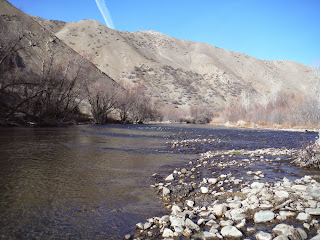 Our new spot didn’t pay off for my brother and I, and looking downstream was blinding.  The sunny day reflected off the water as I watched the silhouettes of my brother and Colton fish downstream.  I went back to fishing and heard, “Woah!”
I looked back down to see the splashes of a fish glittering in the sun, and Colton’s rod doubled over.  I quickly gathered my line, and raced downstream to get a picture. 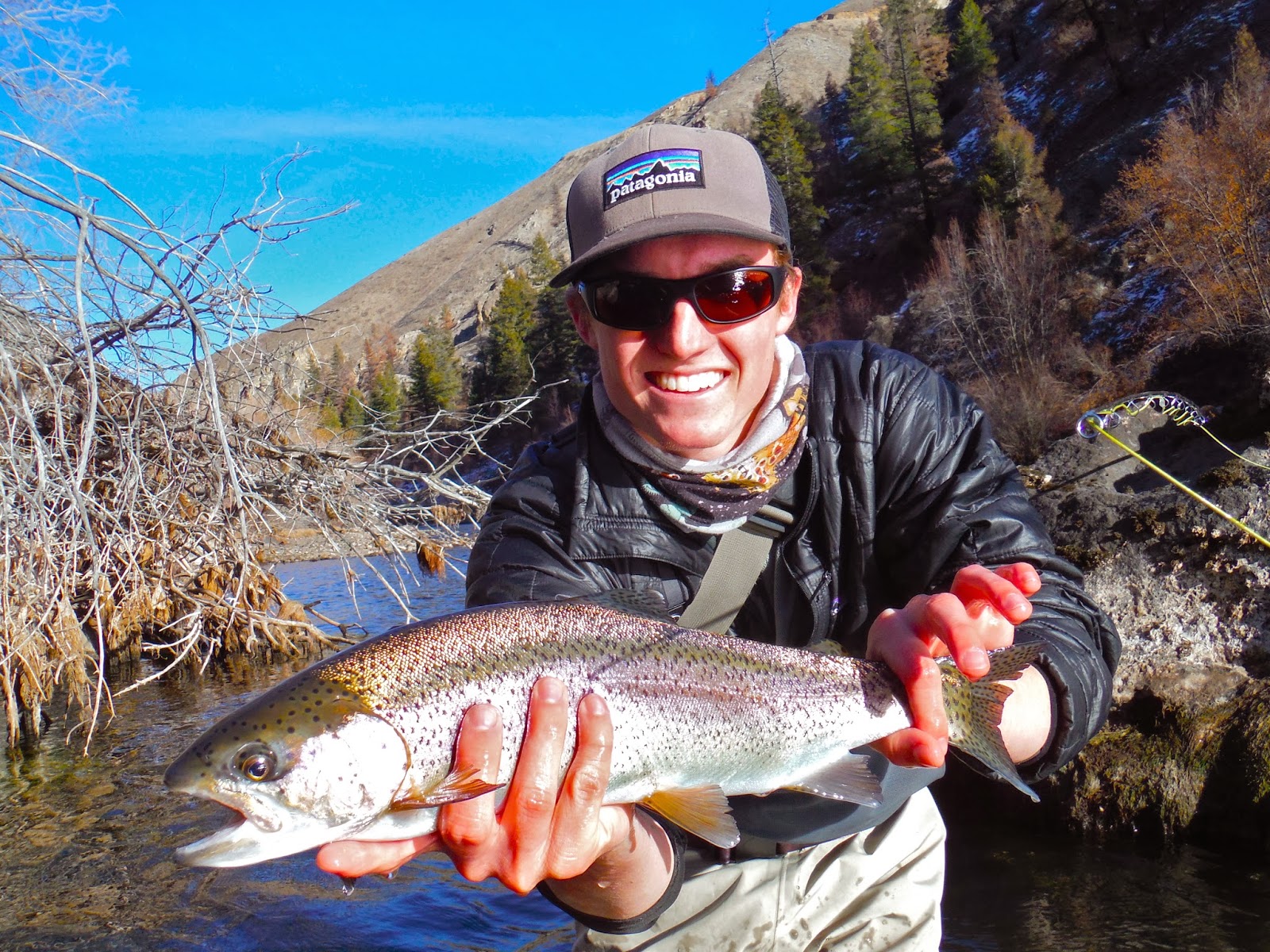 I didn’t stick with Colten long, because his success made me all the more hungry for a fish.  I snuck back upstream to fish, and saw Travis walking on the road.  He stopped to fish across the stream from me, and to my surprise hooked into a fish.
“Thats how it’s done ,Erik!” Travis yelled, as his fish fought.
“Look’s like a nice white fish.” I said back to him.
“No!  No, it’s a rainbow!” He protested as the brought it in closer.
“Hold it up then.” I said.
Travis brought the fish in and dropped his rod tip, and the fish got away.
“Did you like that show?” Travis asked. “My favorite part is when I snuck into your spot, and caught a fish where you were about to cast.” Travis continued.
“Yeah, that was a good one.” I said back to him, “It’s like we’re friends.” 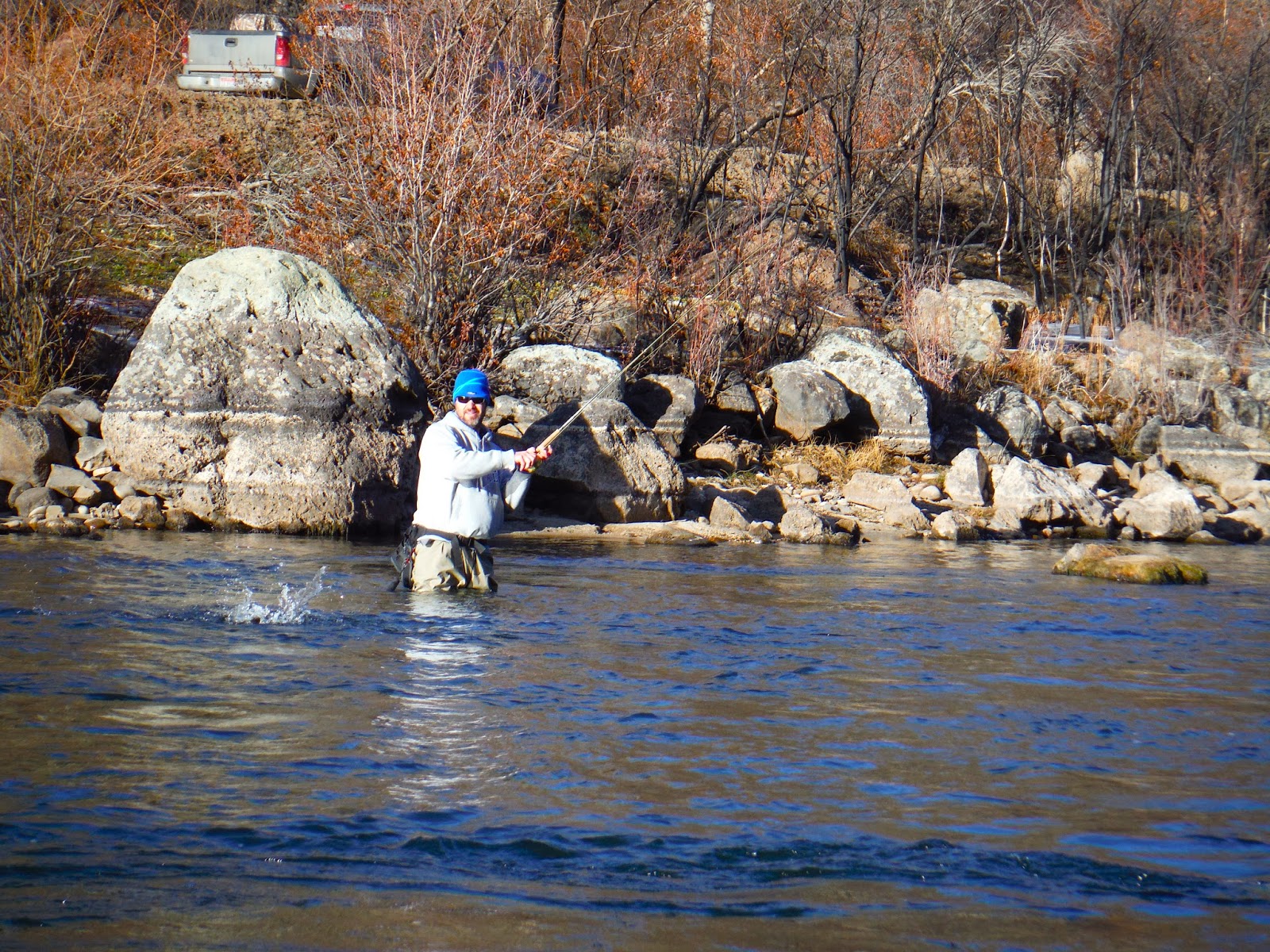 Daylight was running out, and Feef and I were fishing together.  We still had no fish to speak of, but together we walked upstream, searching with a streamer.  By the time we got back to the vehicle, Nick and Colten were waiting, and Travis had already geared down. 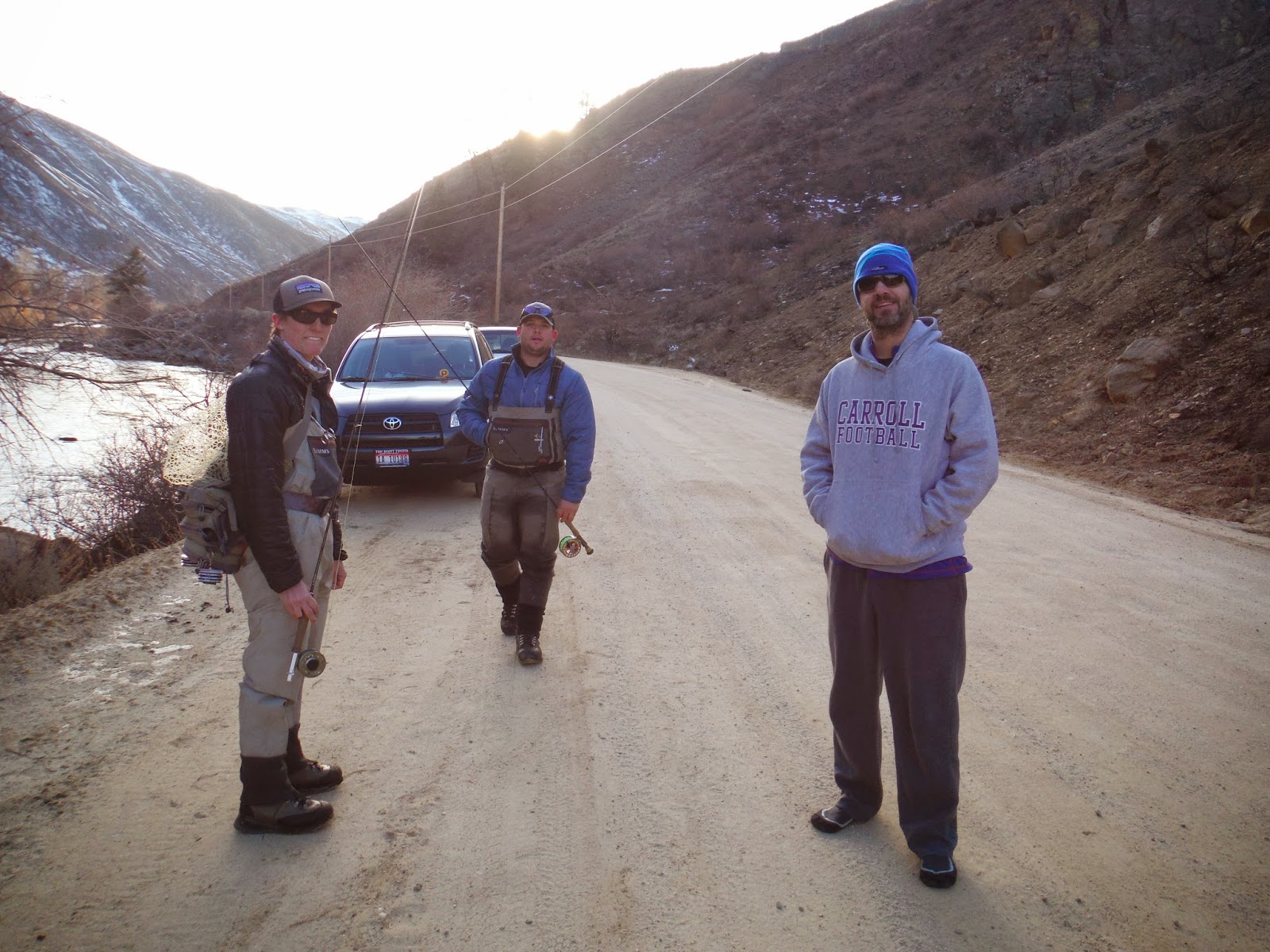 “I saw some fish rising downstream.” Colton said to me, as he pointed.  “You should go check it out.”
“Let’s go!” I said, as we all walked together.
Indeed there was fish rising, however they were so sporadic, it was hard to time them.  I fished with a suspended midge, and got no love.  Feef waded in, and started throwing his olive and white Dali Lama. 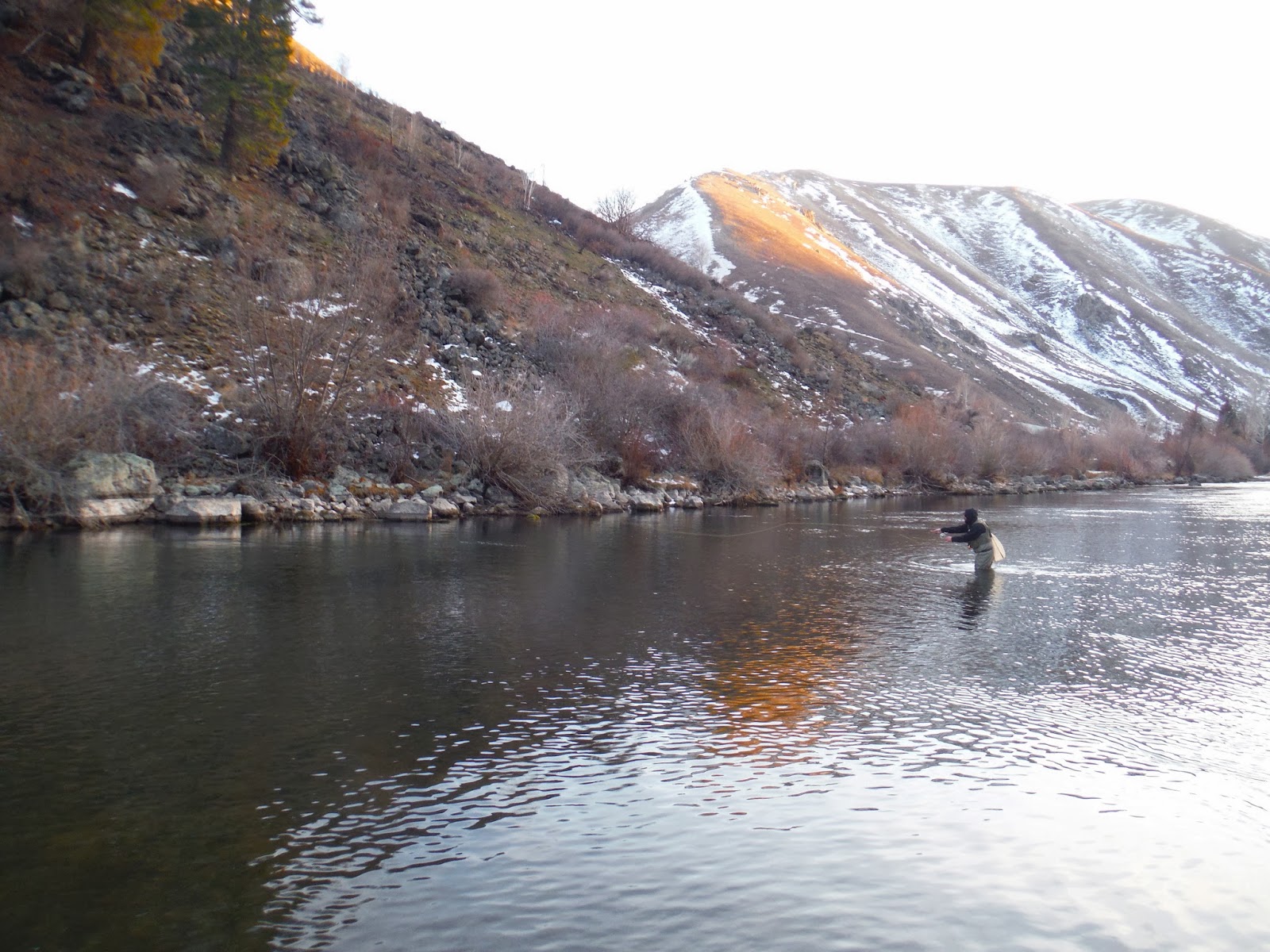 “I got a bump!” Feef said out loud, though I think he was talking more to himself, because his attention was 100% on his fly.  He kept his strip steady, “Got him!” He yelled.
The fish took with such force, that the tip of his nine and a half-foot 6wt. nearly slapped the water.
“This is it, Brother!  Don’t lose this fish!” I yelled to him.
In a flash, Nick had his net ready and headed toward Feef, when his fly rod and line went slack. 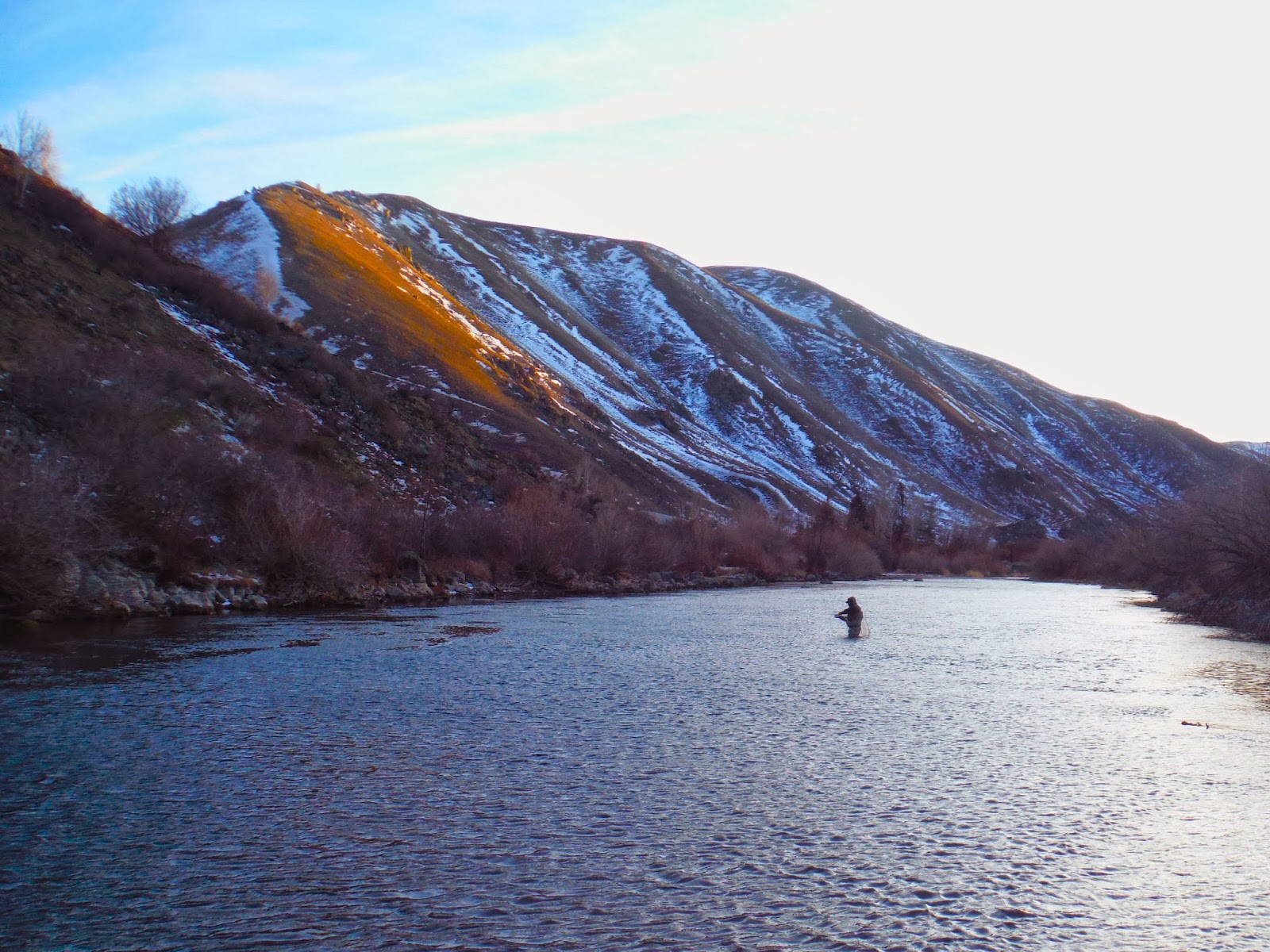 If the South Fork canyon could talk, it would be familiar with obscenities screamed out by frustrated anglers throughout the years, making even the humblest of anglers have their world turned upside down by a fish.  I wish I could end this blog with a fantastic success story of my brother catching the big one at the end of the day, but it just didn’t happen for us.  Feef stayed out on the water, fishing hard until he could not feel his fingers anymore.  We left the South Fork having not caught a fish, but that only fueled the determination to come back together another time to even the score.