Skip to content
It was below freezing when I stepped outside of the vehicle to gear up for a day of fishing, and boy could you tell!  The cold stung my hands and face as I finished gearing up; even my nostrils were freezing with every breath I took of the dry, cold air.  Despite the conditions, fishing was a must today.  After all, I had the opportunity to fish with local European nymphing master, Pete Erickson, and stillwater guru, Phil Rowley! 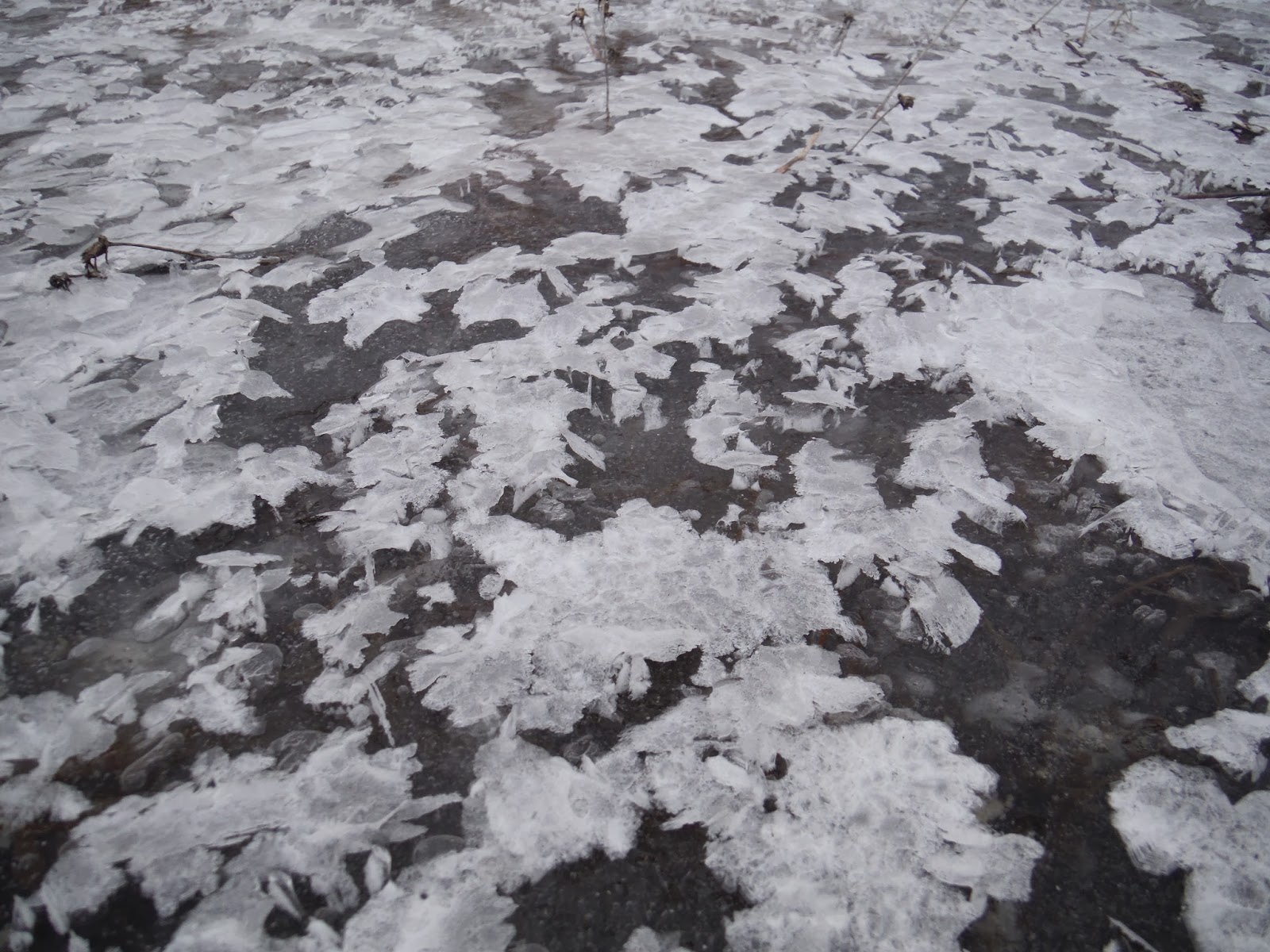 I’ve gotten to know these guys through my involvement with the local fly fishing expo, and it was only a matter of time before we would have the chance to fish again.  After our quick hellos, they started gearing up.
“Erik, just to let you know, Pete and I are the slowest when it comes to gearing up.” Phil said as he grabbed his waders out of the back of the SUV, and he wasn’t kidding.  He immediately became distracted, and stopped gearing up to show us his reading glasses with the lights.
“I look like an alien!” Phil said.
“Check out these cheaters, Erik! They make me look like an alien… when I have the lights on.” Phil said very happily.
“I thought you looked like an alien before you had the glasses on.” I said, as he continued to gather his supplies. 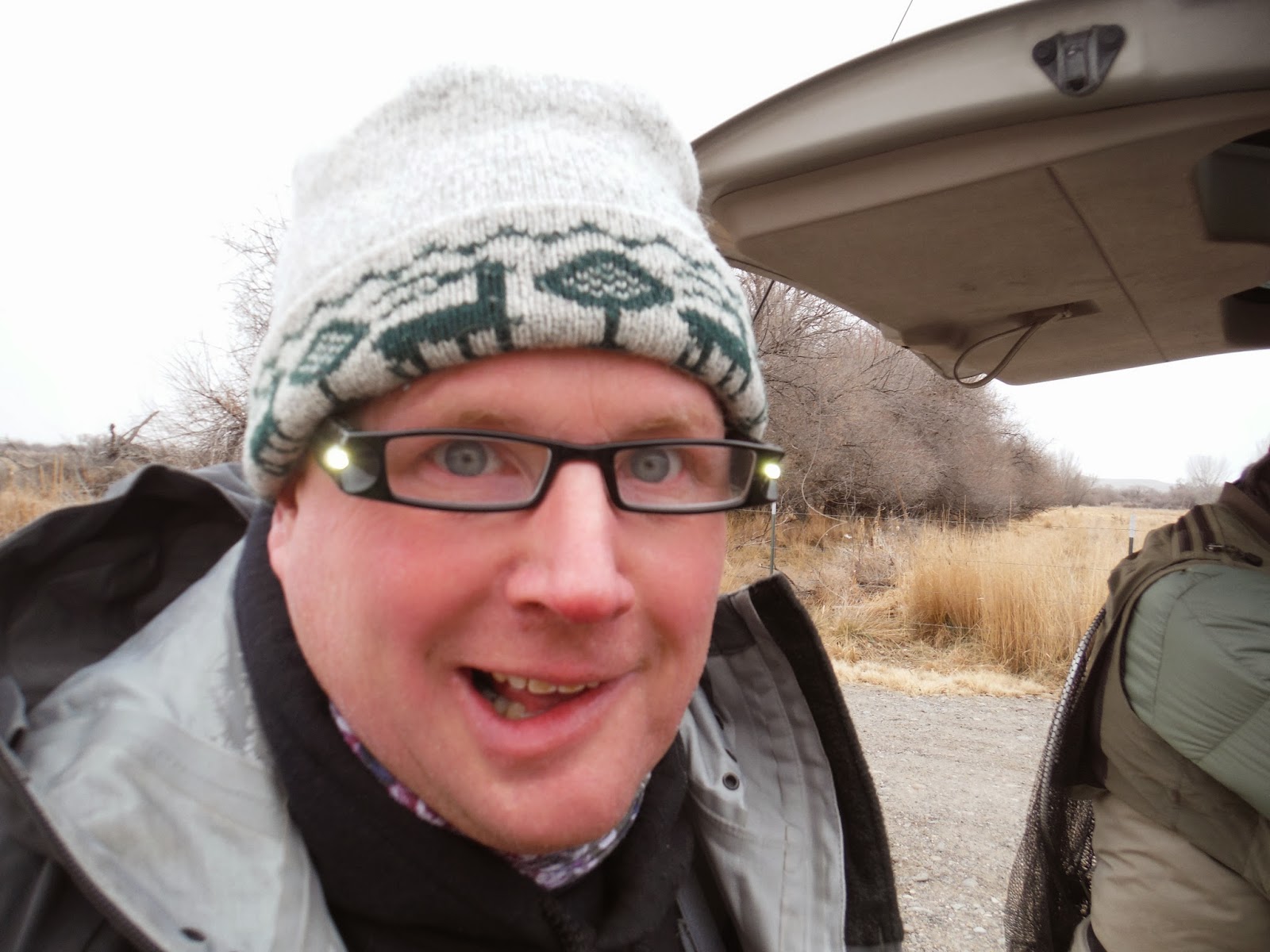 Pete was extremely particular about how he wanted each of his rods set up, and rightfully so: he designed them!  Pete has been working with Echo on his new Shadow 2: a well-thought-out hybrid European nymphing rod that won’t break the bank.
“Here, line up this rod, Phil.” Pete asked, as he held out his 10-foot Shadow fly rod to Phil.
“This is how a MAN rigs a rod!” Phil said, as he started threading the line through the guides. 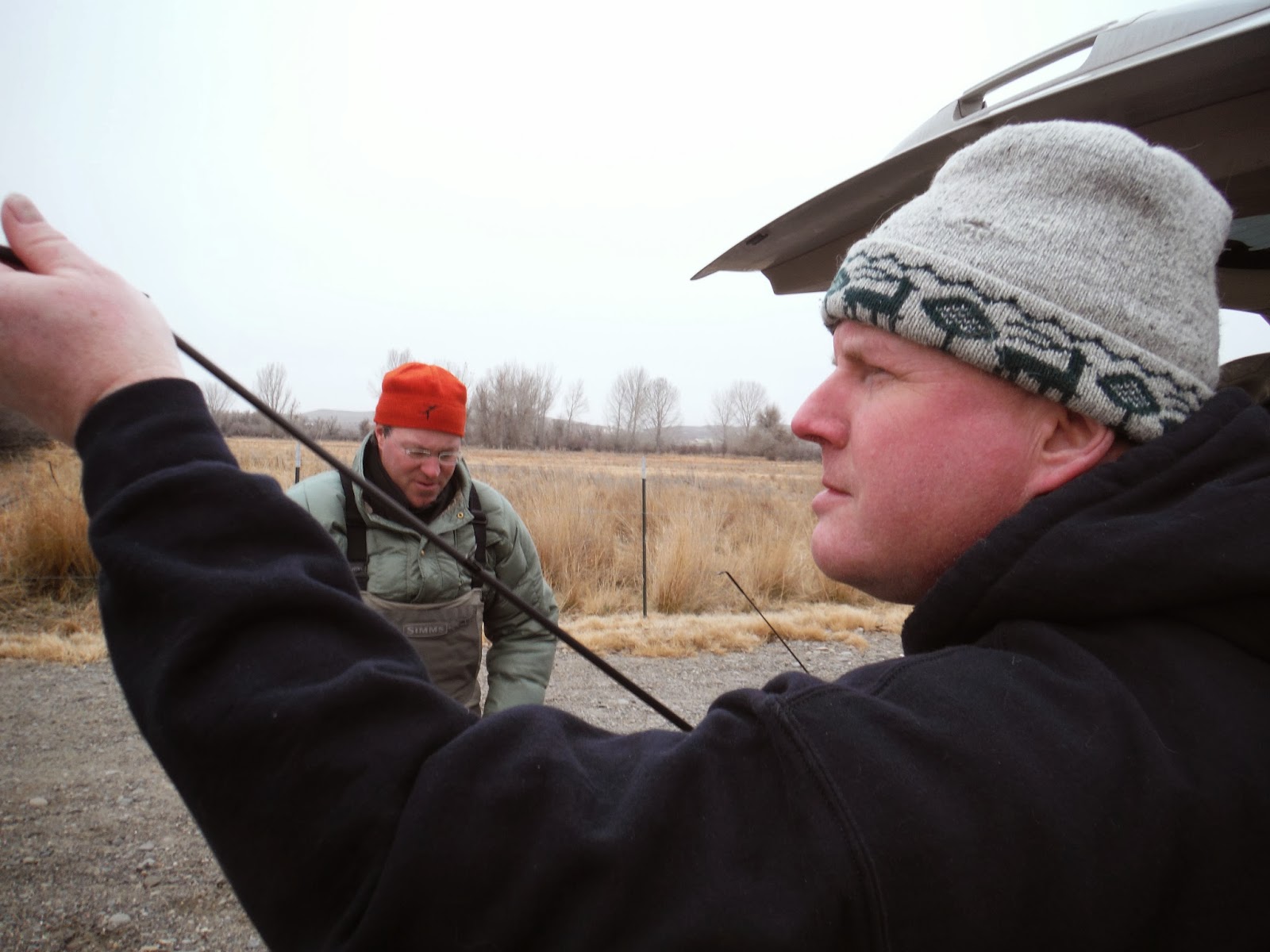 “And this is how I do it.” Phil said immediately after. 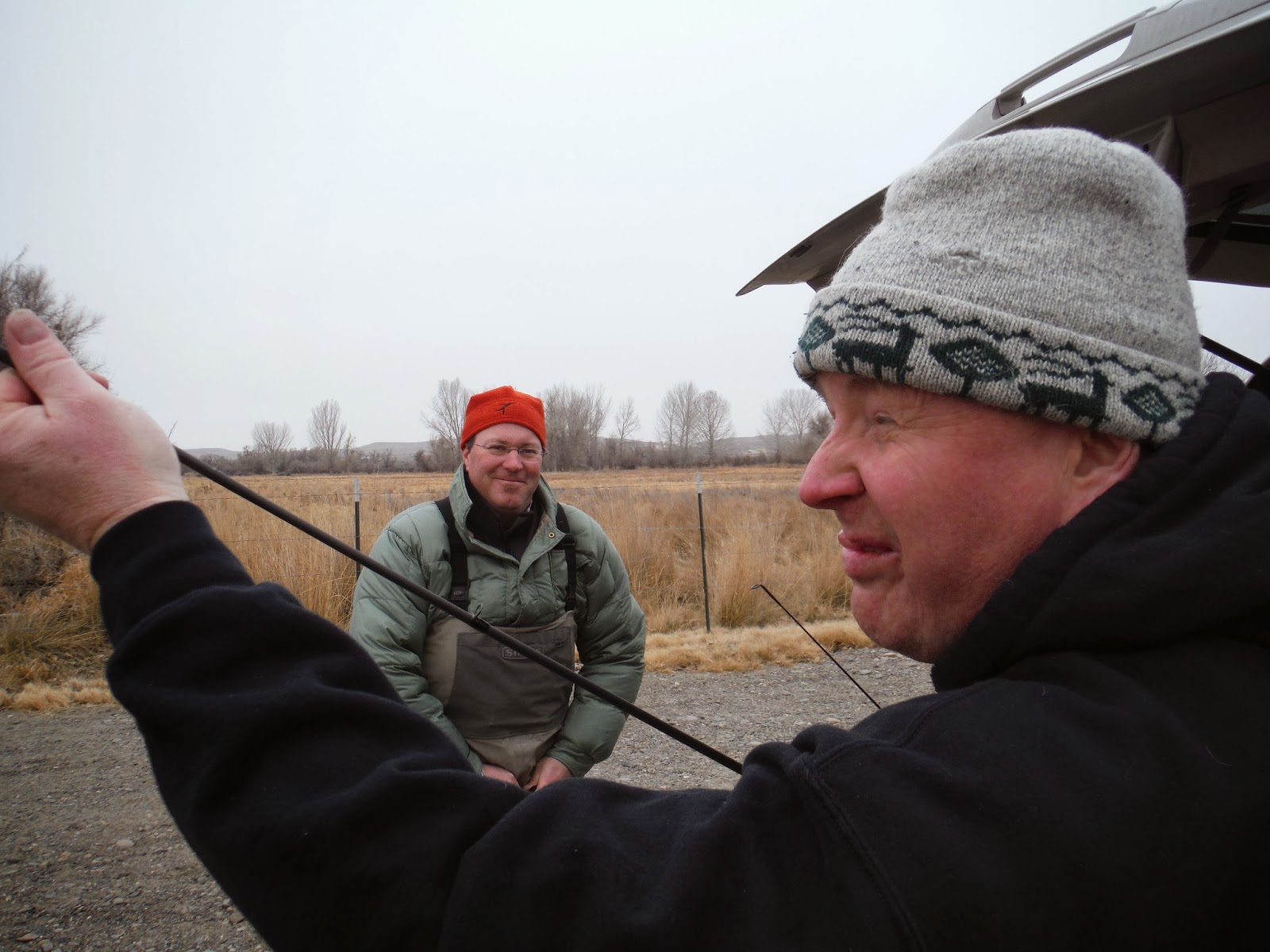 “Before I forget!” Pete said, “Erik, we brought you a few beers and a cigar…”
Those of you who know me, as Pete and Phil do, know I simply didn’t acquire the taste of beer, let alone a cigar.
“Gee, thanks!” I said sarcastically.  Phil patted my shoulder, saying, “We really didn’t bring you anything, but this way we don’t look bad, and you think we didn’t forget about you.”
“That really is awfully considerate.” I said, as we made our way to the river. 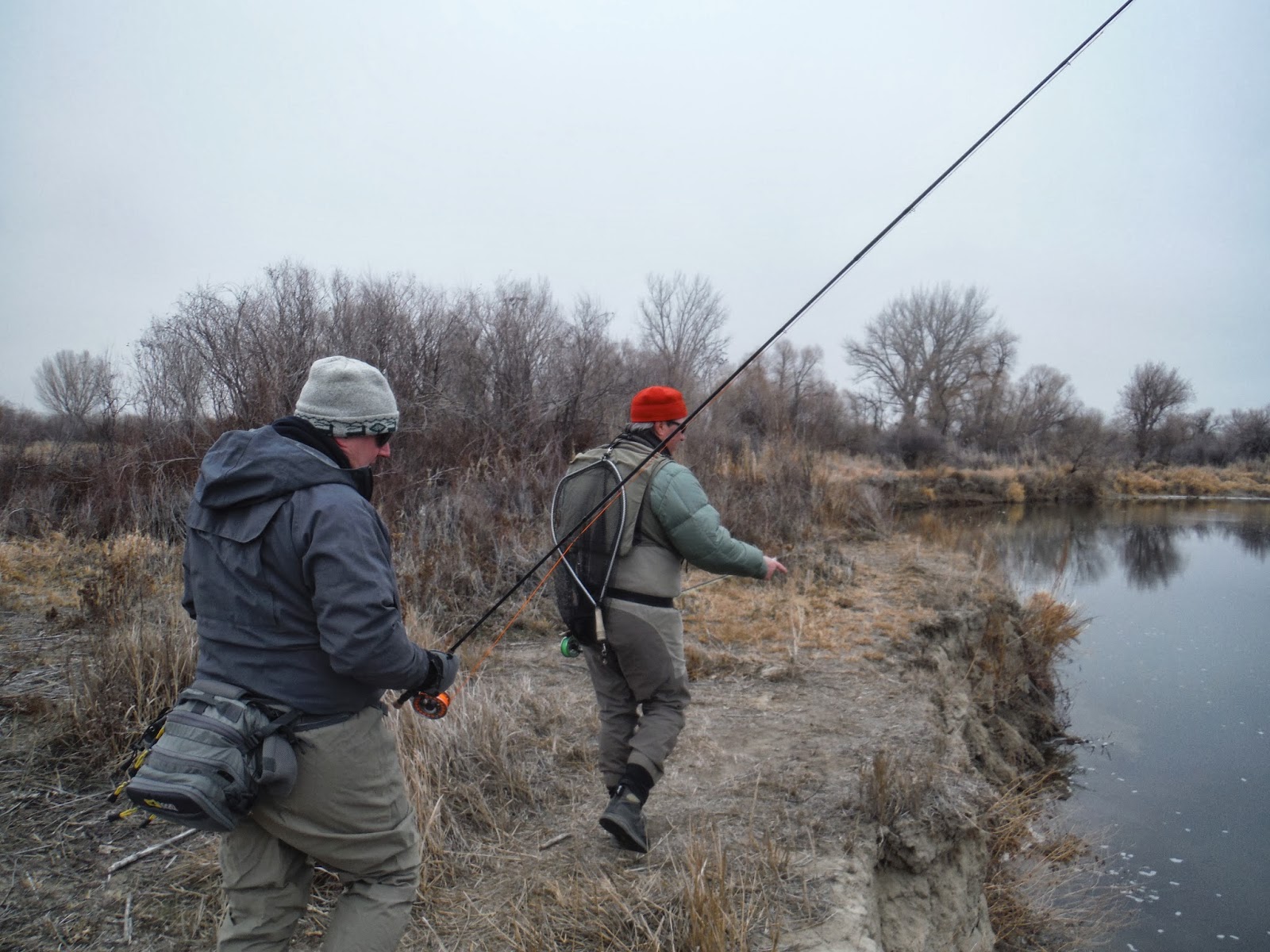 We could see fish rising as we approached the water.
“What are they rising on?” Pete asked, squinting to see a bug.
“Midges.” I said.
“Midges… The only bug stupid enough to hatch in these conditions.” Phil said with a chuckle.
Pete and I got into position to cast our dry flies to these willing fish.  Casting the 10-foot Shadow 2 was different than what I thought it was going to be.  I expected that I would need to adjust my cast for the additional power a 10-foot rod provides; instead I was slowing my cast down, allowing time for the rod to load.  With a forward thrust I could see the loop of my line fully extend, presenting my fly with the kind of delicacy one would expect for a spring creek.  The targeted fish took my fly, but I only felt the slightest bump of its take. Missed him…
I continued casting the Shadow 2 to become familiar with it, but it was short lived.  The cold was catching up with me.  After only a few casts, every one of my guides was frozen with ice that stopped my line from leaving the rod tip. 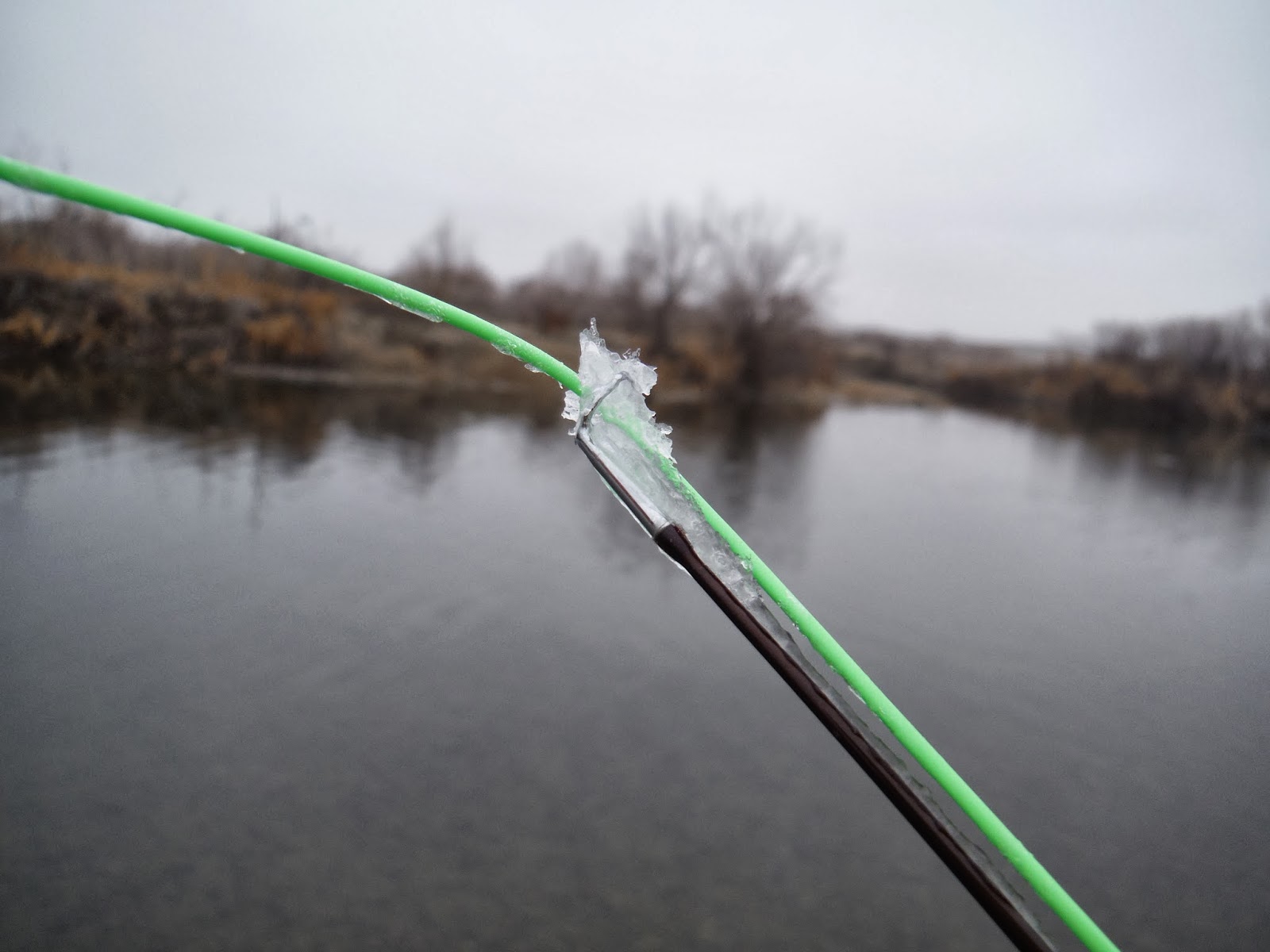 Pete was experiencing the same problem so we decided to head upstream, find Phil, and do what we came here to do: Euro Nymph!  As we walked up, Pete was pointing out good runs to fish.
“That looks nice.” Pete said. “That’s where you should fish, Erik.”
Pete went on, “Look at this spot!” Pointing to another part of the river,  “I bet there are fish piled up there.”
Phil was walking with us, listening to Pete as he went on.
“Check out this shelf!” Pete pointed to a run where the water flowed in a shallow trickle, then dropped down about six feet.
“I bet that is a good spot too!”
“Hey I found a spot!” Phil interrupted, pointing downstream.
“Right there!”
Now Phil pointed at the sky…
“And here!”
“Oh, and over there!” Phil said excitedly, pointing in every direction. 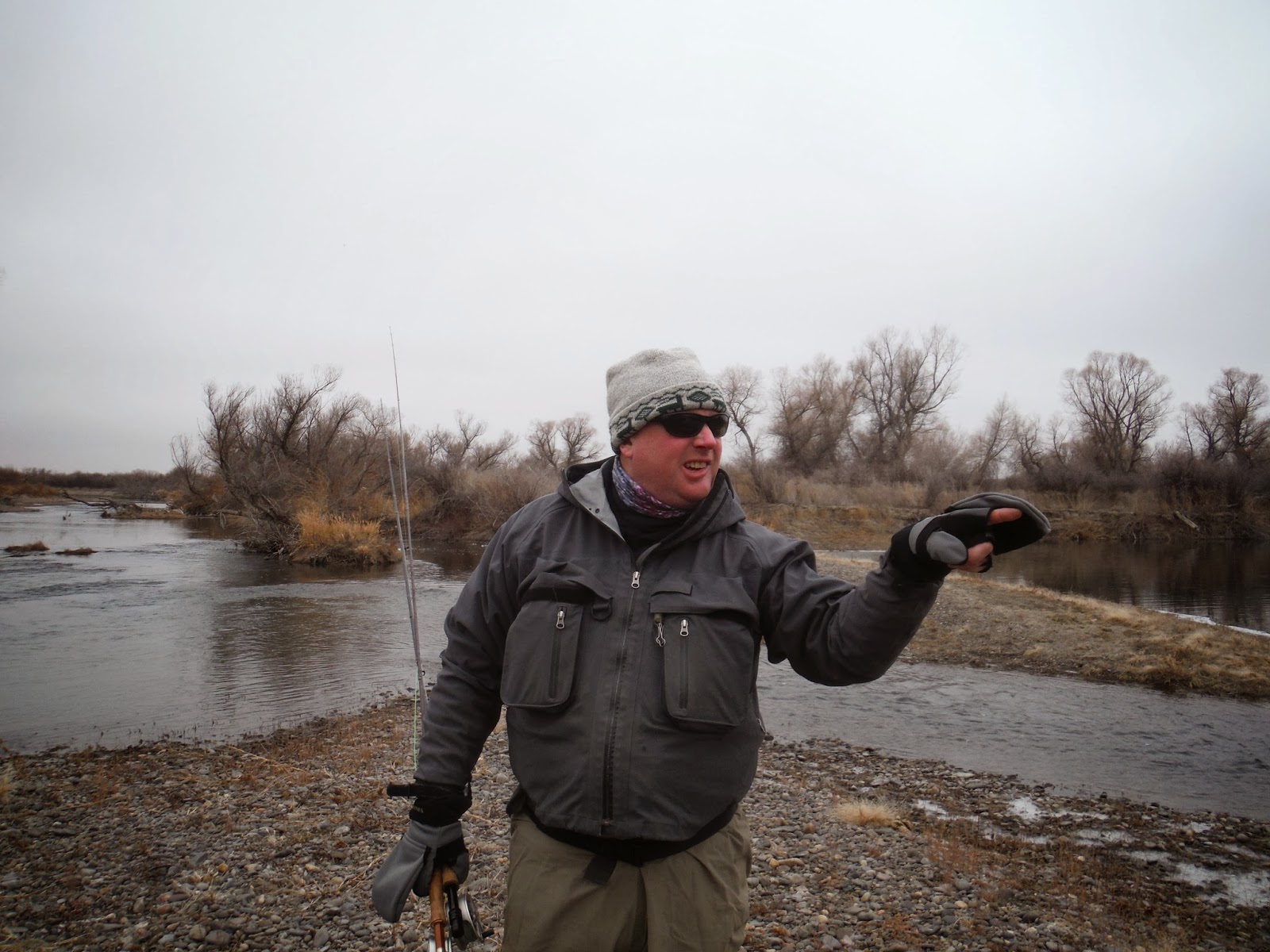 “Gimme that!” Pete said to Phil, who was holding the 10 1/2-foot Shadow 2, rigged for European nymphing.  Phil had already been fishing European style with major success, so he handed the rod to Pete, and my instruction began. 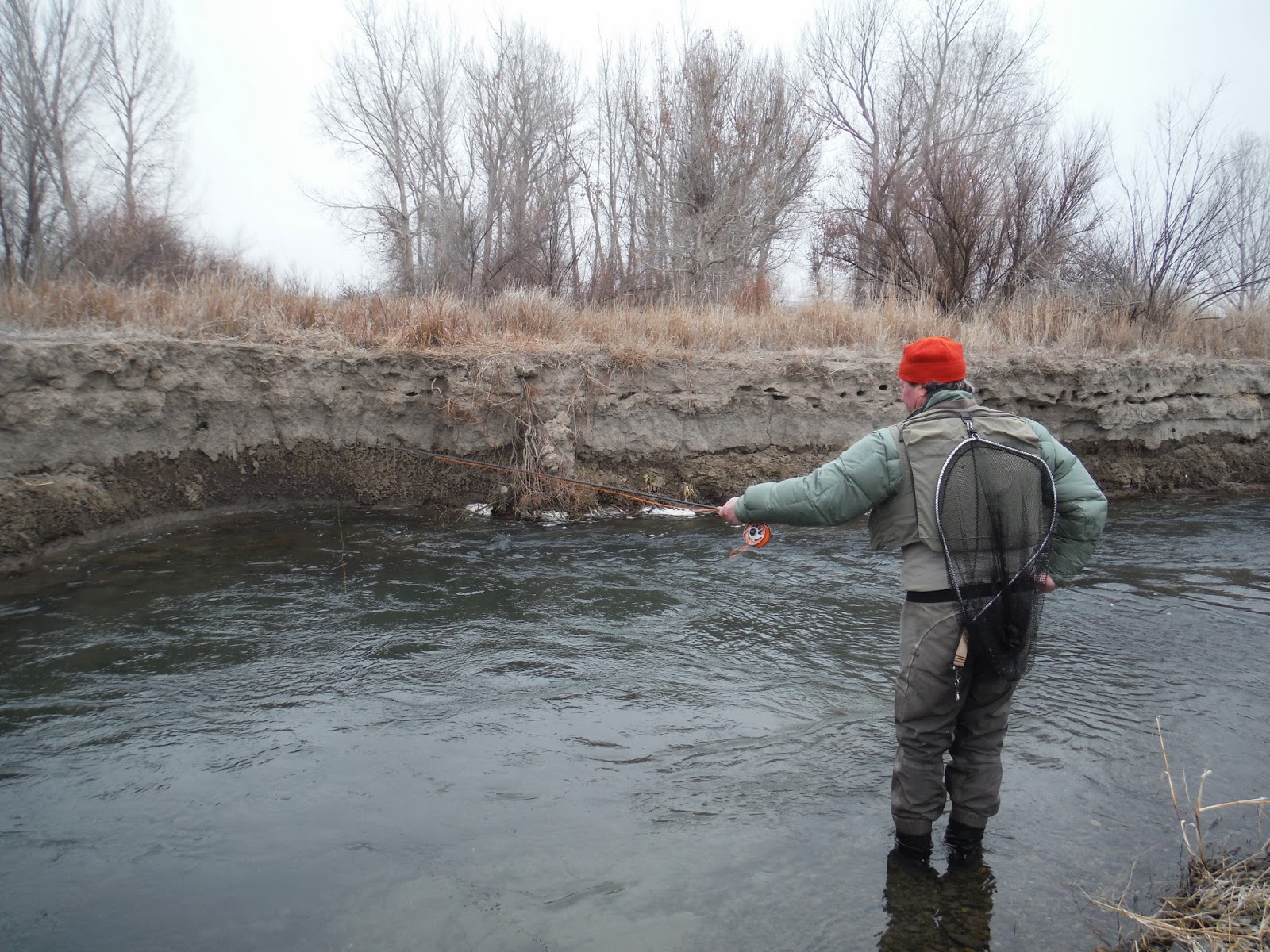 A fire hose of instruction and information was being hurled my way, as Pete fished the run.  The difference between Czech, Polish, and French style nymphing was being explained in full detail, along with the proper way to lead, swing, and finish each attempt before starting another drift. 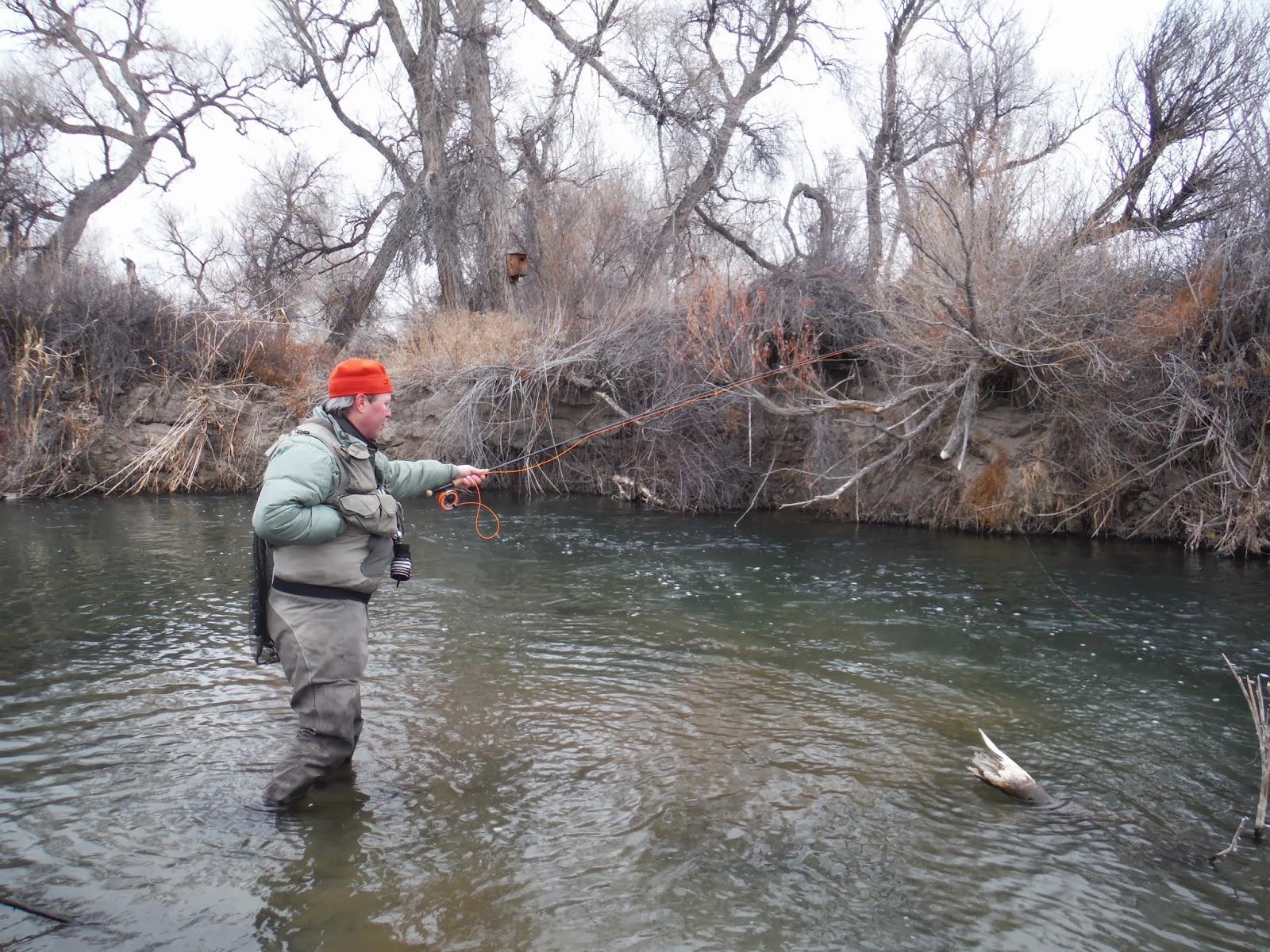 “Okay, Erik.  This next spot will be perfect for you!” Pete said, as we walked to a new run.  I stood, waiting for a fly rod that wasn’t handed to me; as Pete started fishing the very spot I was to fish.

“Did you see that?” Pete asked, as he set the hook on a fish.
“What?” I asked.
“The movement in the indication section of the leader.” Pete said, bringing in his fish.
“Yeah, I saw it!” I lied.
“What a great instructor…” Phil said, as Pete released his fish.
“Take note on how he recommends a great spot to fish, then steals the water before you, his student, gets a chance to fish it.” Phil ended with a chuckle.  I leaned over to Phil and said, “Why do you think I said I saw the indication there was a fish?  I didn’t see a thing, I just want to fish.”
“Okay! Okay!  Here you go.” Pete said, handing me his creation, and I immediately started fishing.  A few quick pointers, and I was already in my first fish! 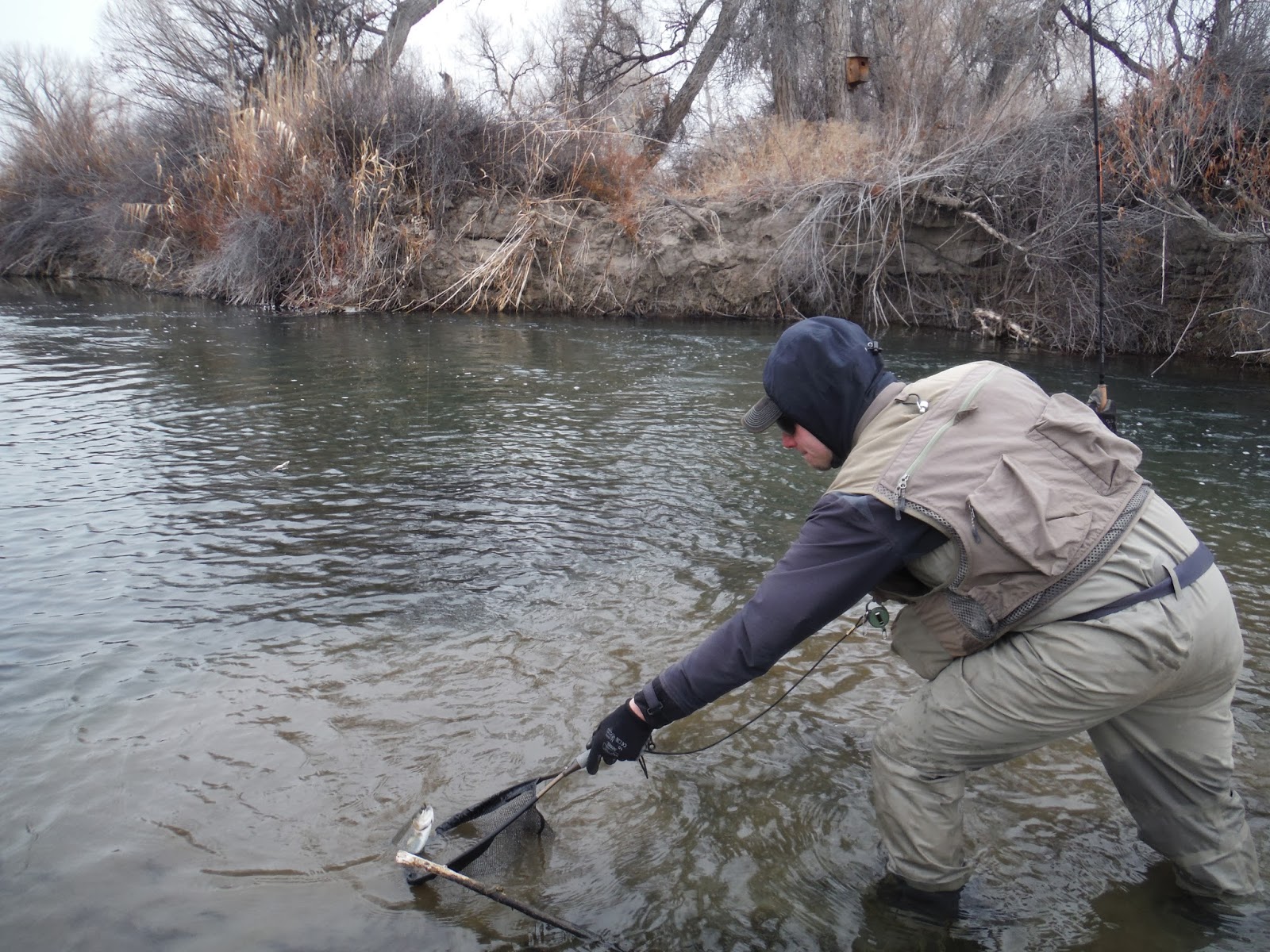 “There you go!” Pete said happily, as I released my fish and immediately went back to fishing.  Pete was telling me how to “lead” my fly into areas I couldn’t present a fly to, and boom!  Another fish!
“Let me see that rod!” Pete insisted, ripping the rod from my hand after I released my second fish.
“Seriously?!” Phil protested, “He only got two!”
“It’s killing me! I have to fish it!” Pete said with wild eyes.
“And he already got two!” Pete continued, trying to validate his actions.  Pete proceeded to catch fish after fish, with no thought of giving up the rod.
“Okay!  Hand it here!” Phil said, after Pete’s tenth fish.
“You’re a terrible instructor!” Phil said, with a laugh. 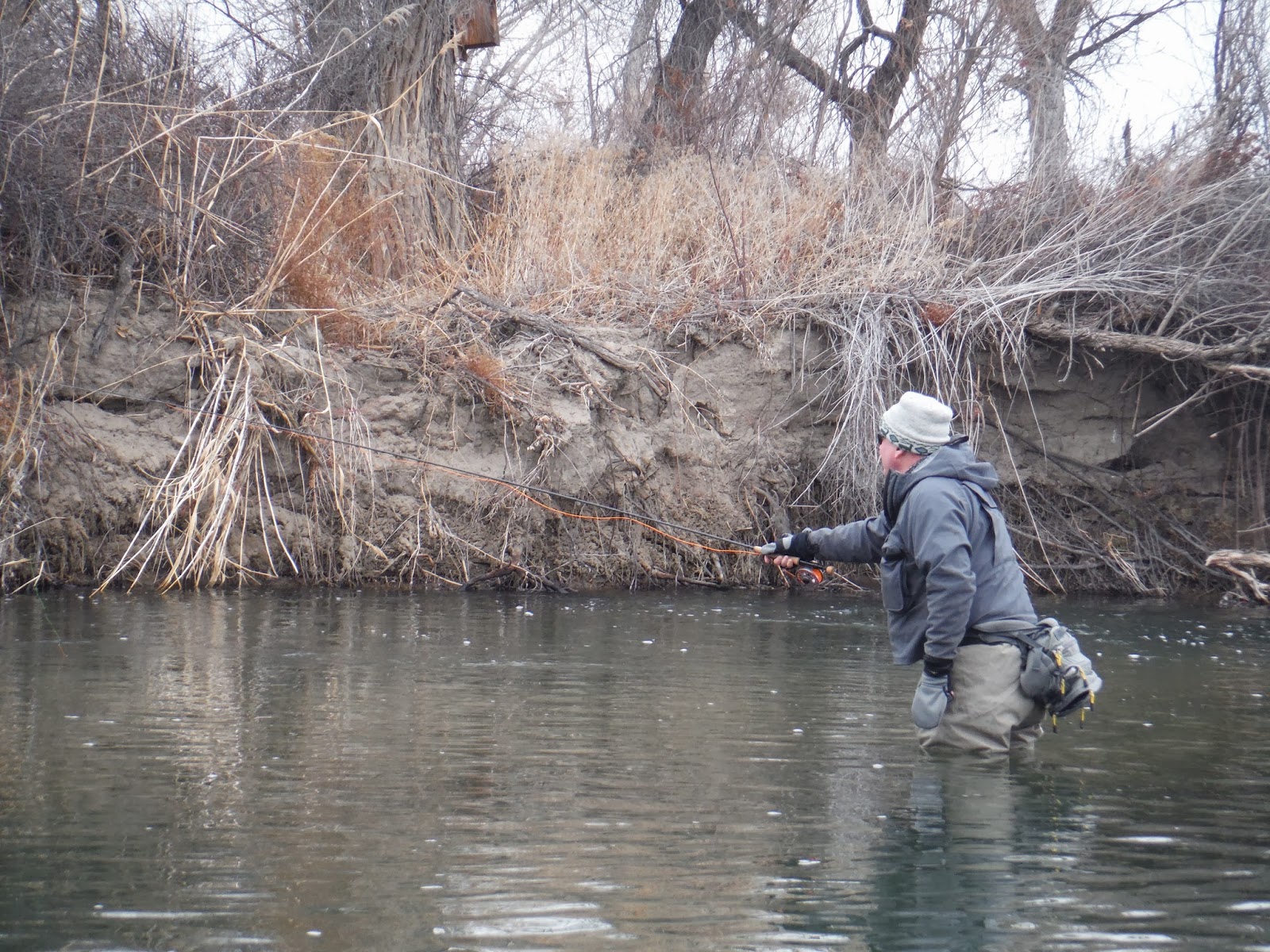 From then on Pete didn’t fish.  He coached both Phil and I, as we nymphed the river with tons of success.  In the end, Pete got his chance to fish again, but this time to rising fish.  After switching from a small fly to a tiny one, he caught his last fish of the day. 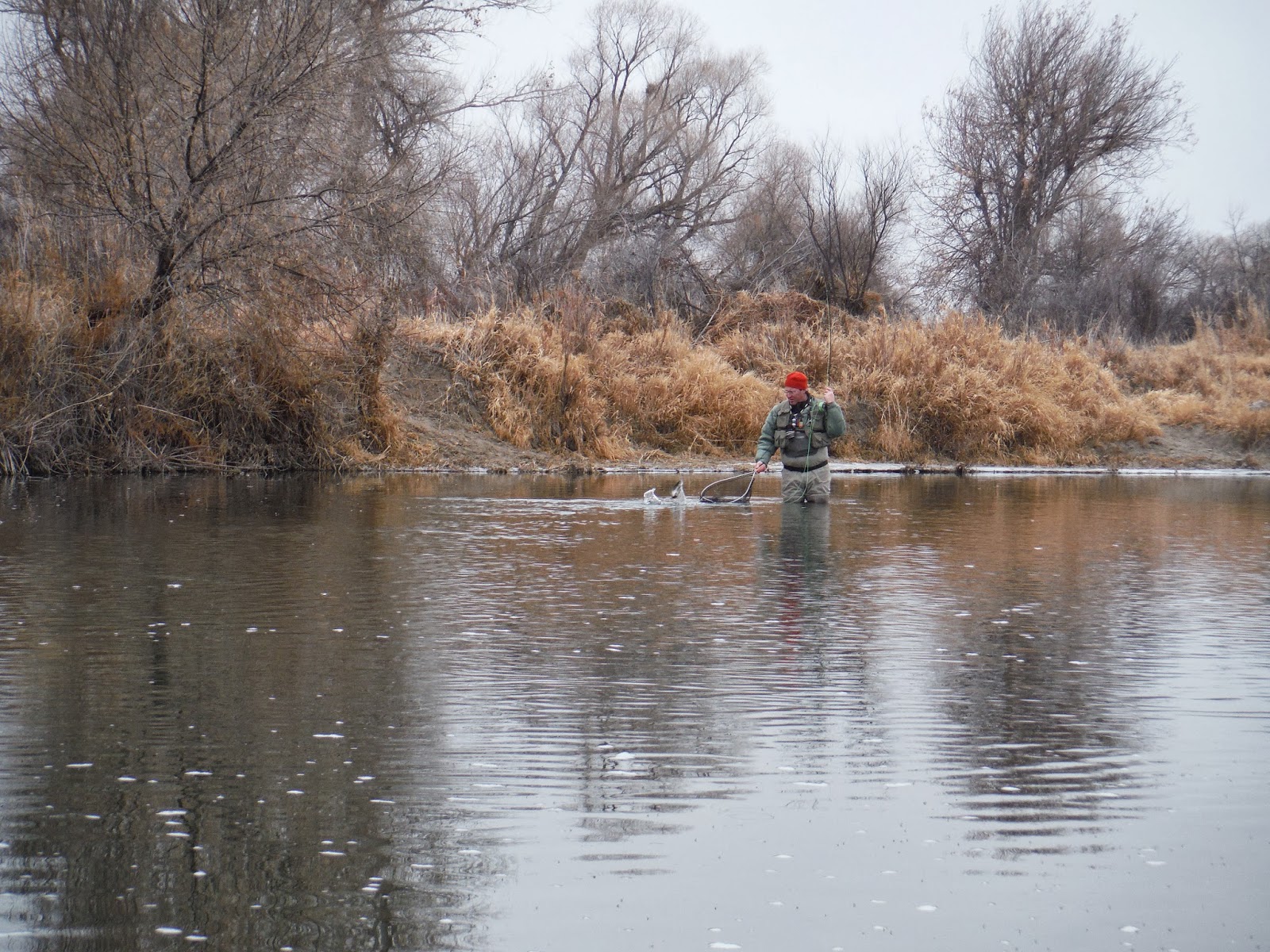 Pete reluctantly stuck his hands in the water, in order to get the tiny dry fly out of the fish’s mouth.  After popping ice out of his guides, and trying to warm his hands, Pete asked the question we were all needing to hear; “Are you guys cold enough yet?”
“I know I’ve had enough fun for one day.” Phil said, and we all walked back to the vehicles, half frozen. 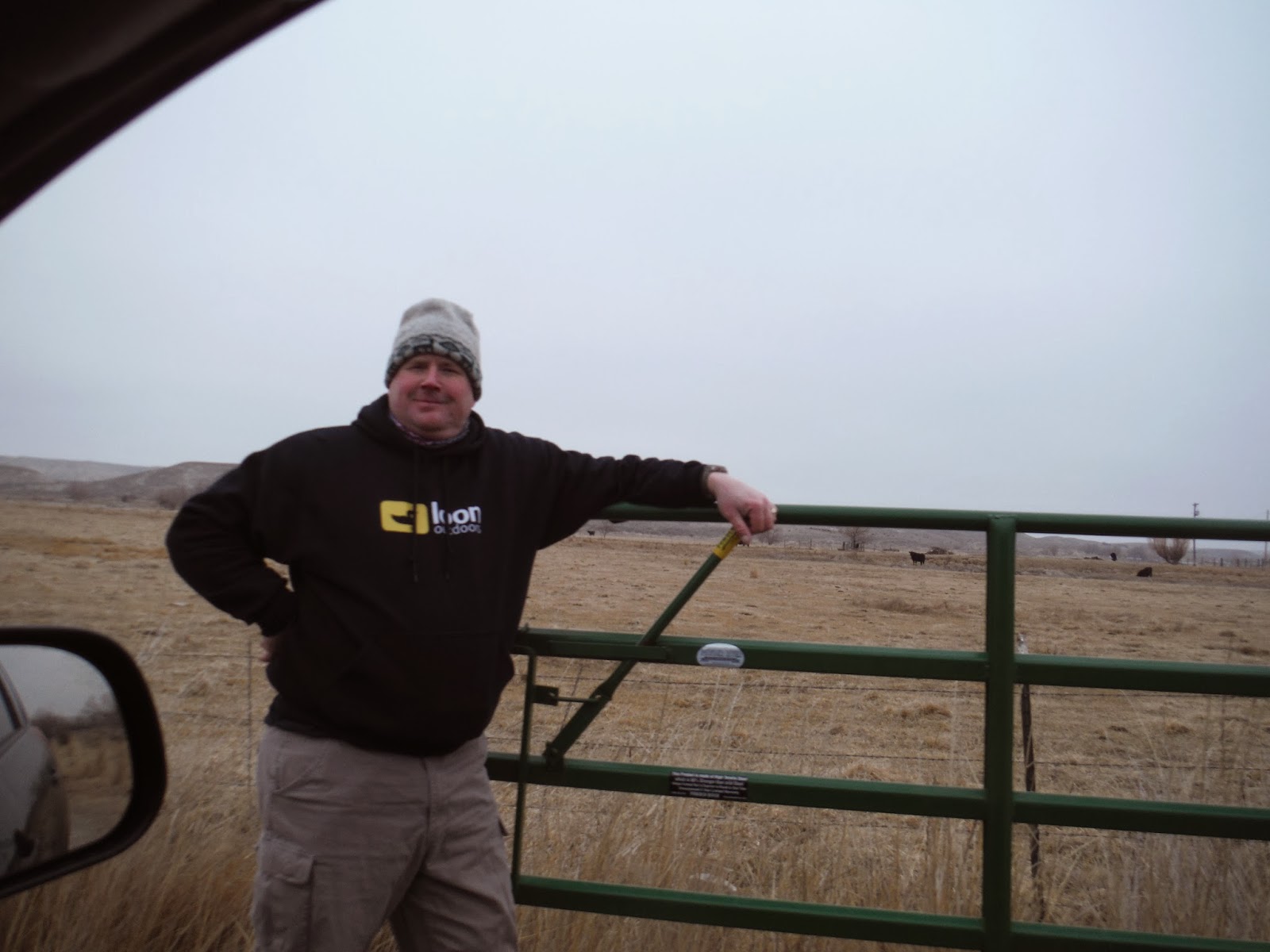 Phil opened the gates to get us out of our parking spots as we headed back to Boise.  On the drive home, I had plenty of time to reflect on the day.  I said to myself, self, I says… Perhaps I can convince John, (the owner of Anglers, where I work) that he needs to buy a Shadow 2 for us employees to “try out” in the shop… I guess we will see how that goes.

2 thoughts on “Nymphing With the Master”