Skip to content
With two very large gear bags, fly rod cases, three other miscellaneous bags, and more, I looked at Mark Grajcar and asked, “Did you forget anything?”  Mark has one of those laughs that when you hear him, it makes you laugh.
“I don’t want to forget my streamers.” Mark said, packing in another box before we took off.
“I tied up some Kelly Galloup sex dungeons and barley legals streamers for today.”  Mark said, “And I showed them to Carolyn.” Carolyn is Mark’s wife.
“She was disgusted with the names, and hopes I won’t catch a fish on them.” Mark said, with a laugh.
“That means we have to catch a fish on them!” I added, with enthusiasm.
We were nearing our turn to Anderson Ranch Dam when a large animal galloped out into the road.
“That’s and el… Those are moose!” Mark said, correcting himself mid-sentence.  Sure enough three moose went trotting off into the open hills. 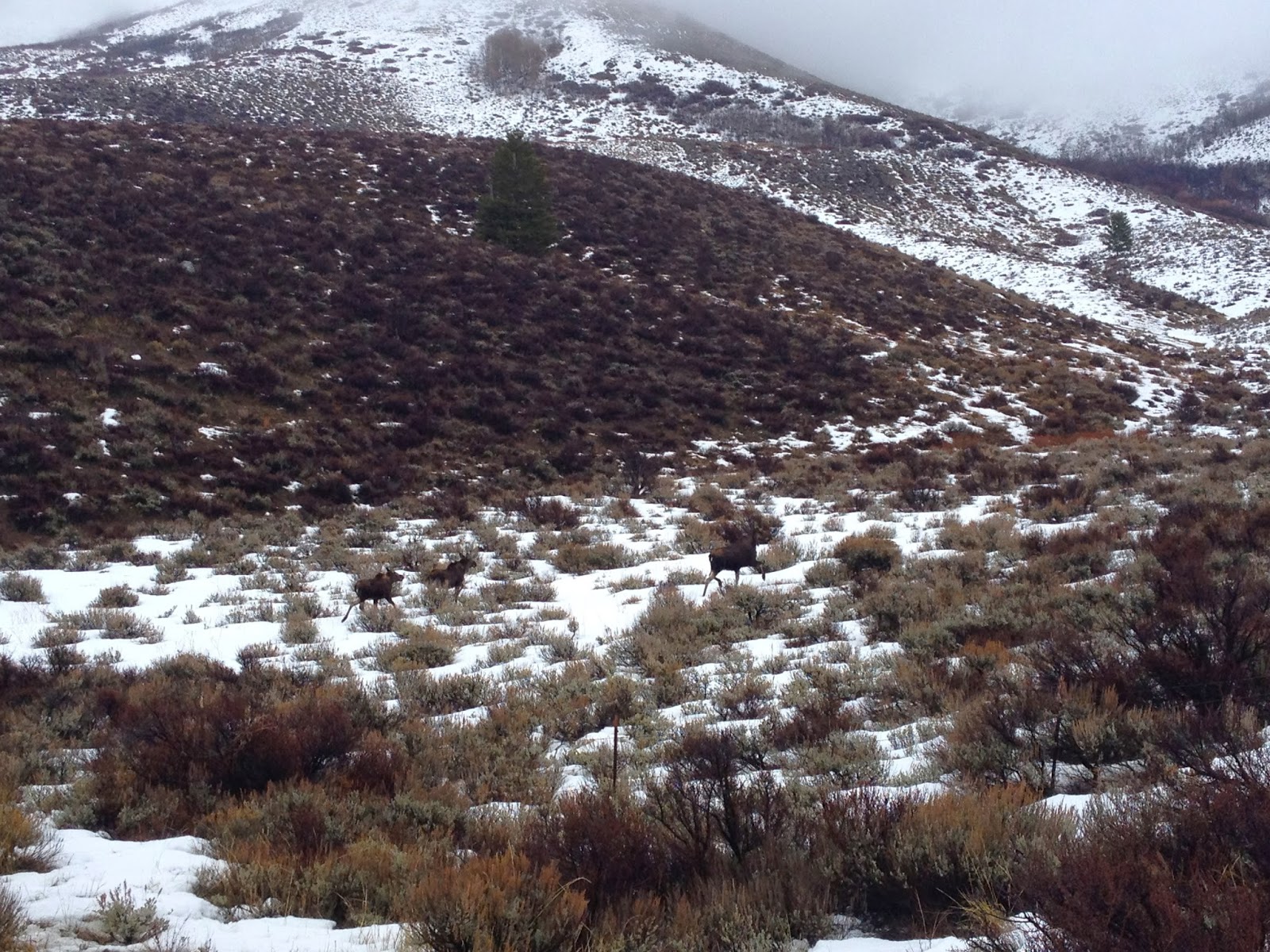 We reached the river, and the further we drove downstream the worse the river got.  The heavy rain was washing mud into the river, causing a lack of visibility in the water.  Before the fires the rain was not a problem, but now it was only a matter of time before the river was completely silted with mud. 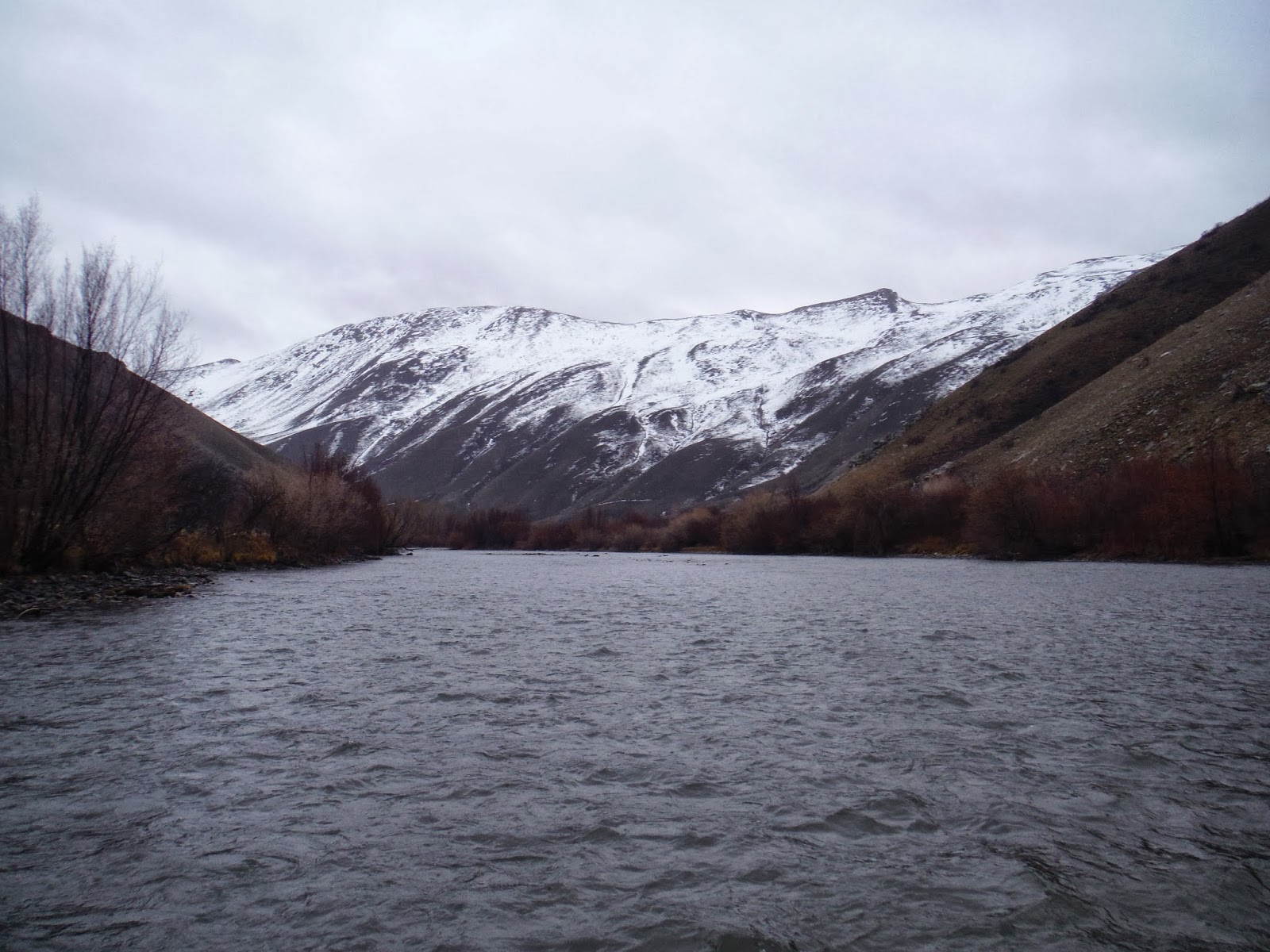 I started Euro nymphing while, Mark chucked his enormous streamers in search of a hungry fish.  As far as I could tell I was doing everything right, but with no success.  Upstream, Billie, Mark’s lab, was running around the bank while Mark worked his streamer.  Earlier Billie had flushed a chukar, and I’m sure she was looking for another one.  During all the time spent fishing this spot, the only thing I managed to bring up was this mid-sized white fish. 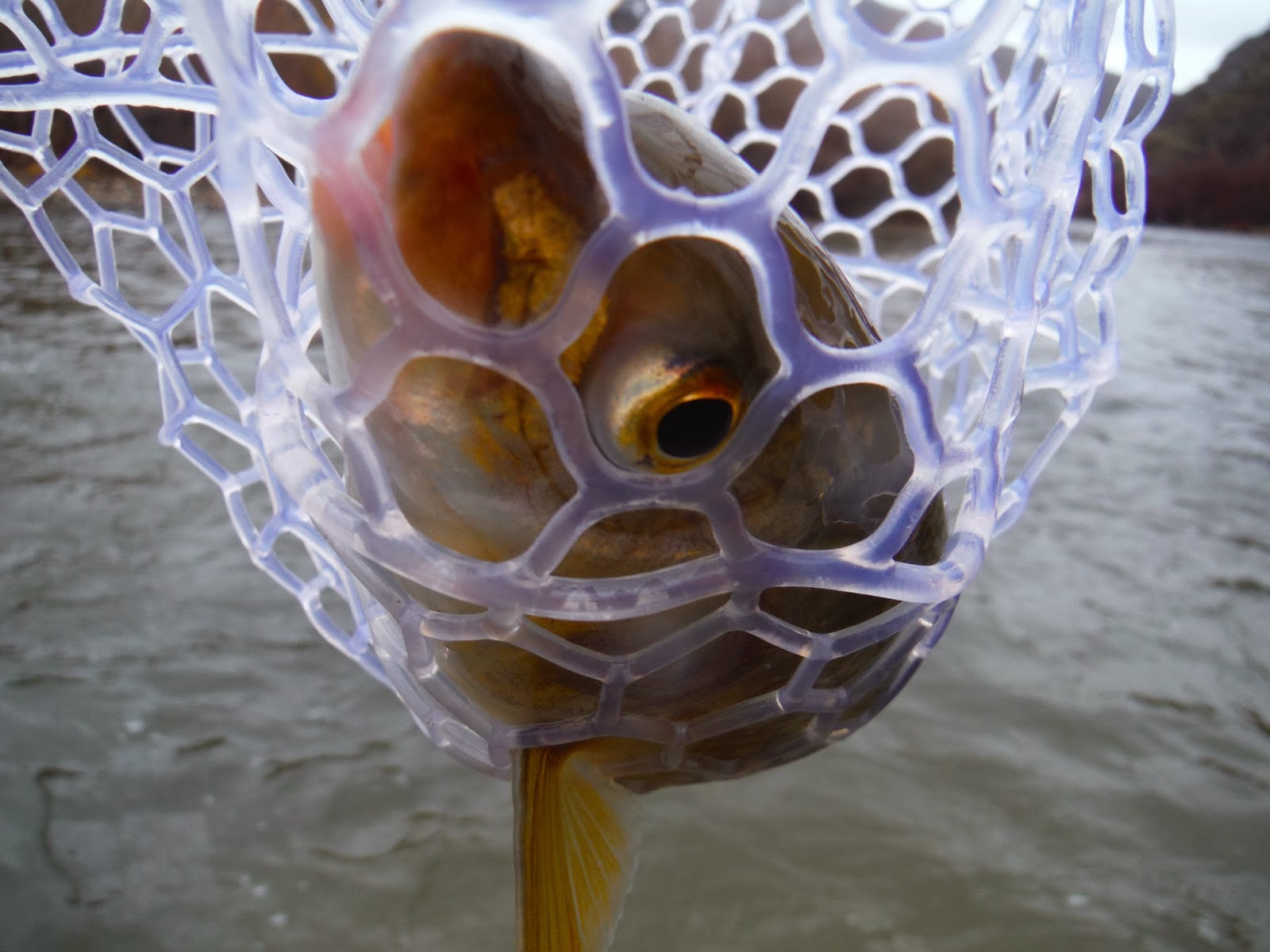 Since the fires, people have been coming into the shop and telling us that no fish had survived.  That is 100% untrue, but it seemed to be the running joke of the day.
“All the fish are dead here, Mark.” I said as we exited the stream.  Mark laughed at the comment, adding, “Well, the water has gotten more and more muddy, that could be a factor.”
“It’s certainly not looking good.” I added. 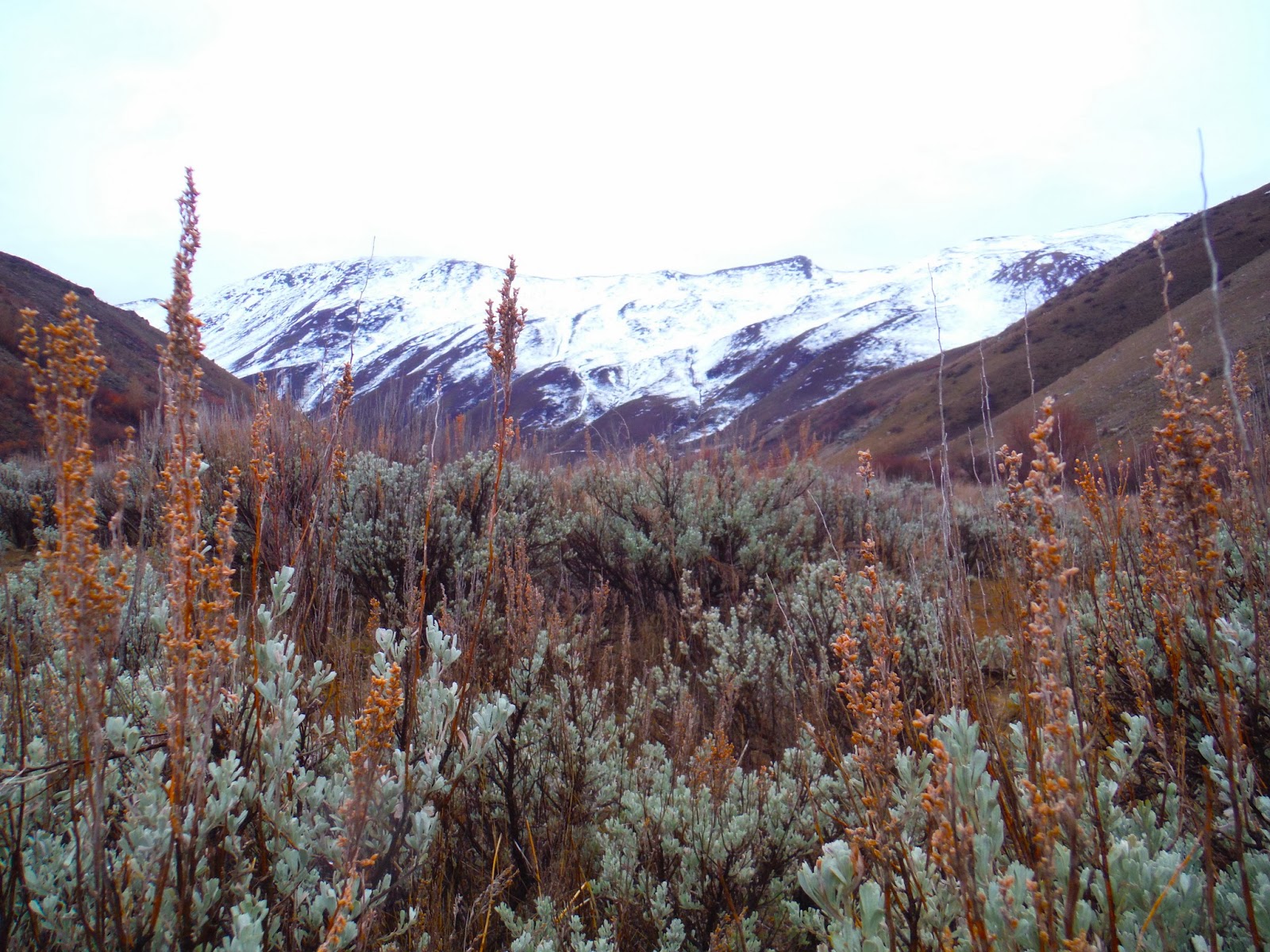 Mark took us to a new spot but, just like the last spot, we caught nothing (unless you want to count my white fish).  I snapped a picture of Mark fishing the run, and after a second glance, I could see that Billie was displaying her thoughts of Mark’s fly fishing abilities… 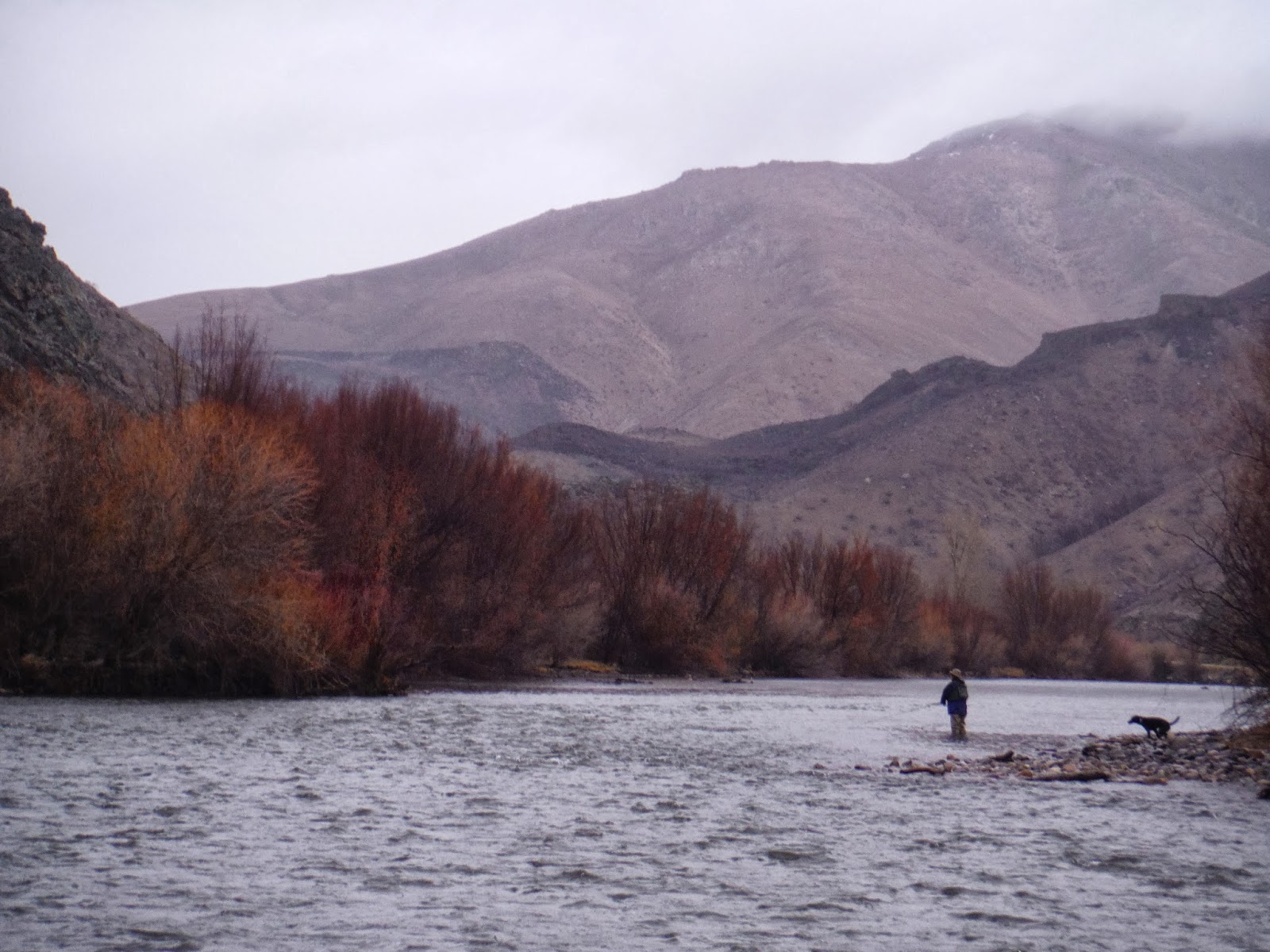 The South Fork had turned into a river of mud with no visibility.  Up and up we drove, looking for another spot to fish.  It wasn’t until we approached the dam when we started to see clearer water. 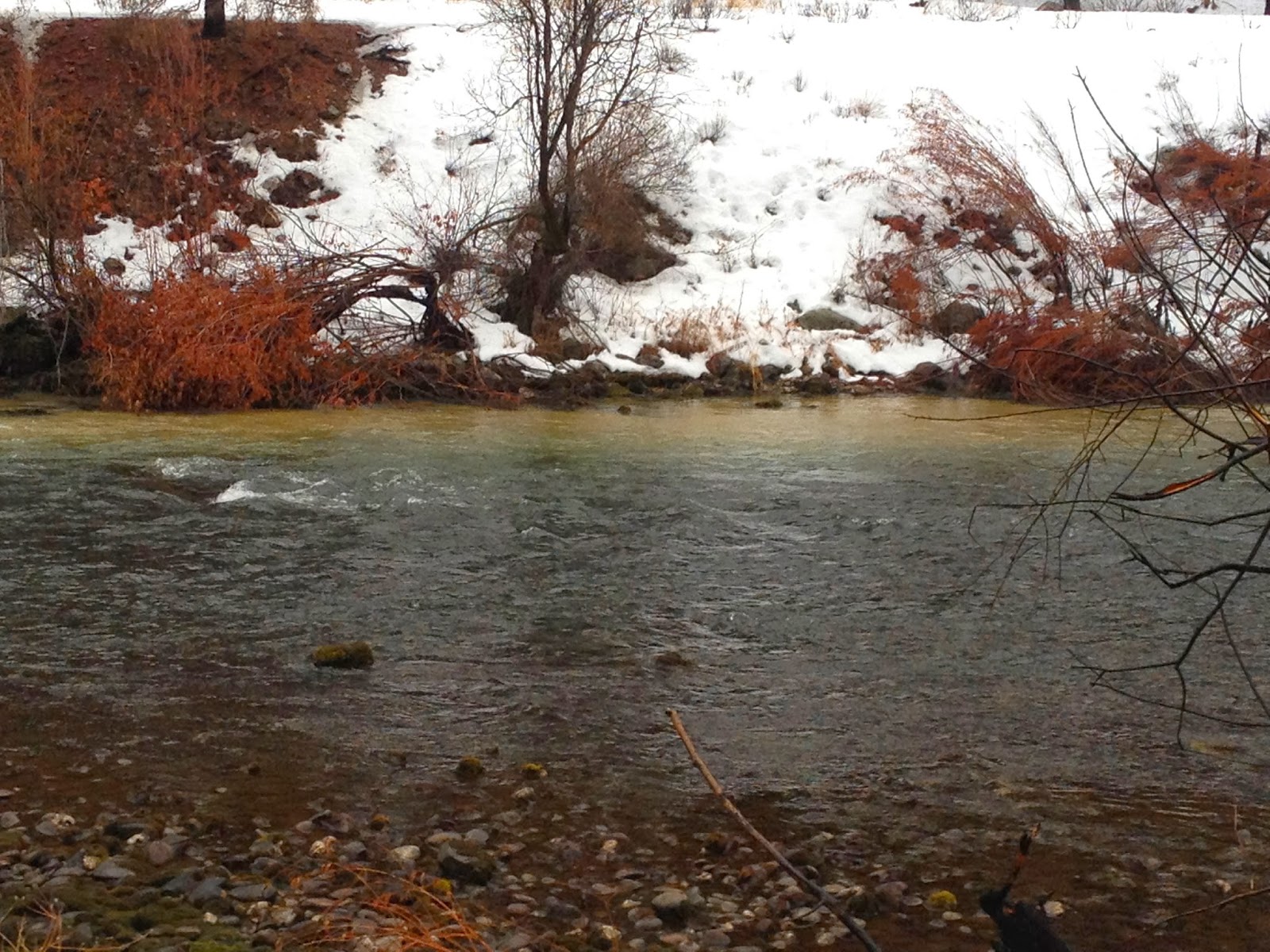 Just downstream from the dam was the only place where the water was clear.  We both had streamers on, working our way upstream.  Like true sportsmen, we were blaming everything but ourselves for not getting into fish today; we even went so far as to blame Mark’s wife, Carolyn, for cursing the flies before we had even started fishing. 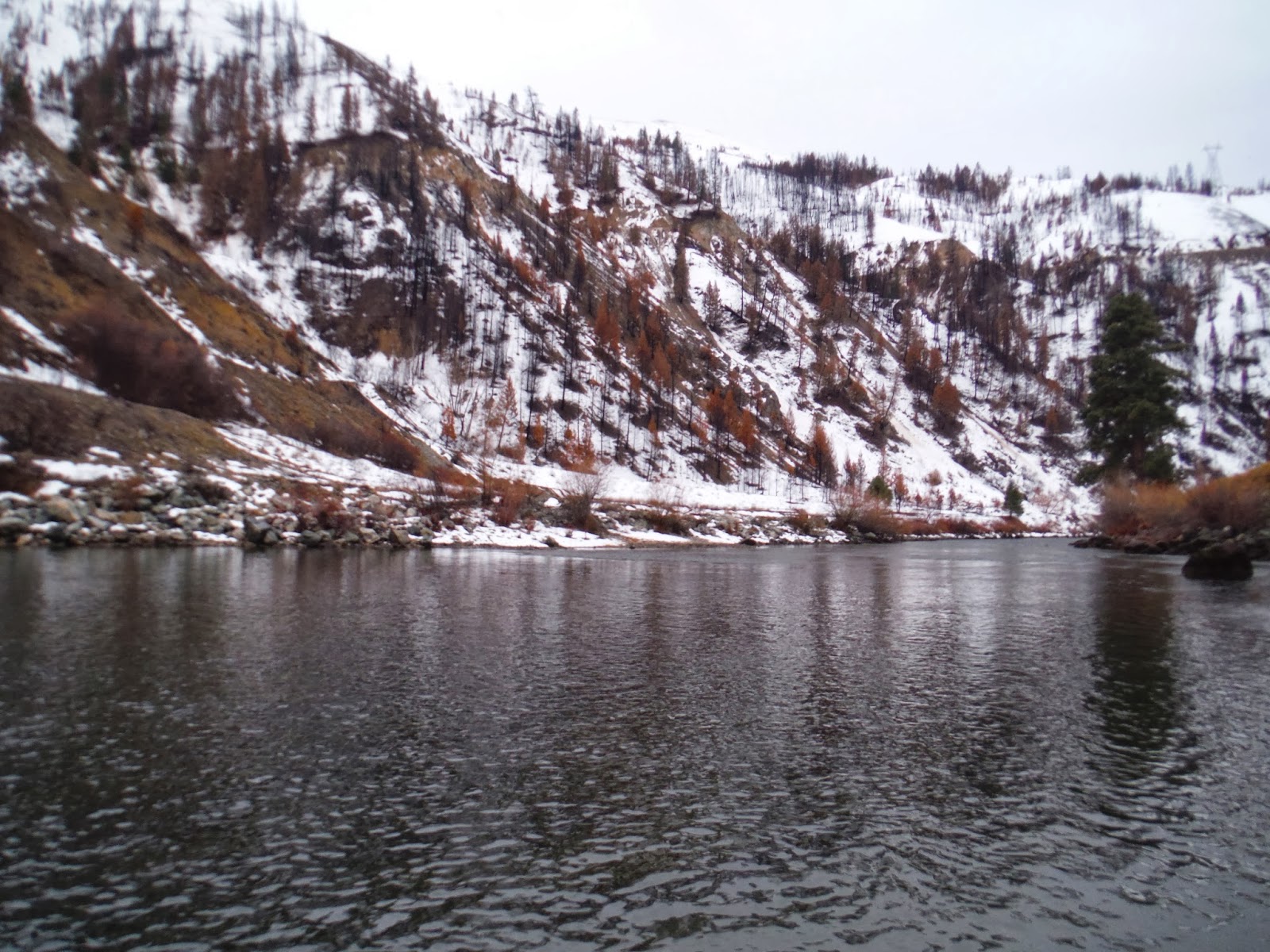 On the river’s edge, Billie was watching as Mark and I rocketed our streamers out as far as we could.  It was beginning to feel like a lost cause.
“Whoa!” Mark said faintly. I looked over and saw his rod was bent.  For a second I thought he was snagged, because there was no play in his rod.  I watched as his line started cutting through the water, which does not happen if you are snagged.
“A FISH!” I yelled to Mark. 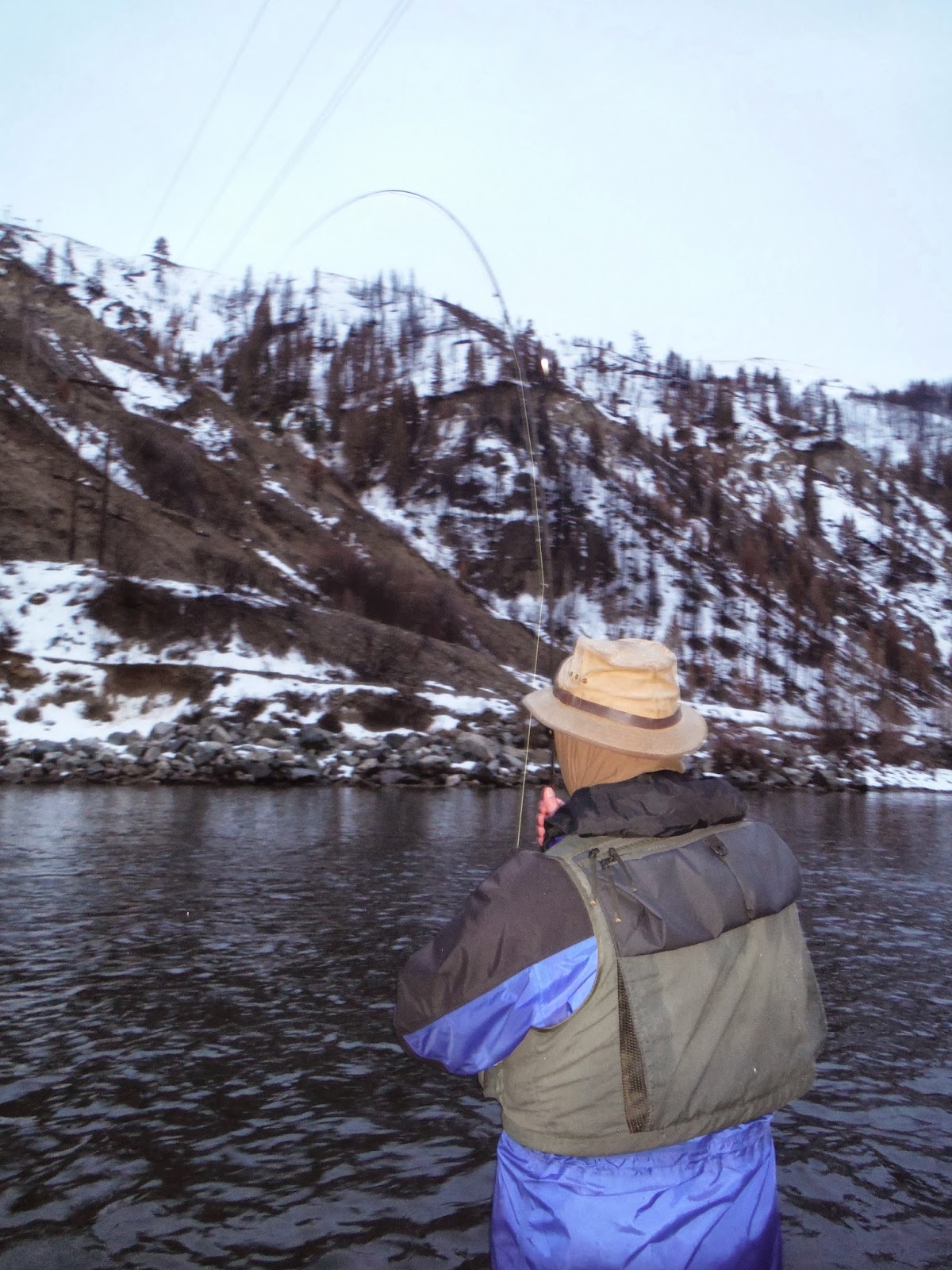 Mark played it cool, not over reacting to the fight of the fish, and keeping his line taught as the fish went for another run.  I raced over to help land the fish, and as he brought it in close enough for us to take a look, it turned and bolted off.
“It’s a bull trout, Mark!” I said over the screams of his reel.
“Well it doesn’t want to come in!” Mark said with a strain, as he managed to keep his rod from slapping the water.  Another attempt to bring in the fish failed.  Our excitement must have gotten Billie riled up enough to jump in and swim over to us.  Mark’s rod was doubled over as he lifted the fish’s head out of the water; I slipped the net under it, landing the fish. 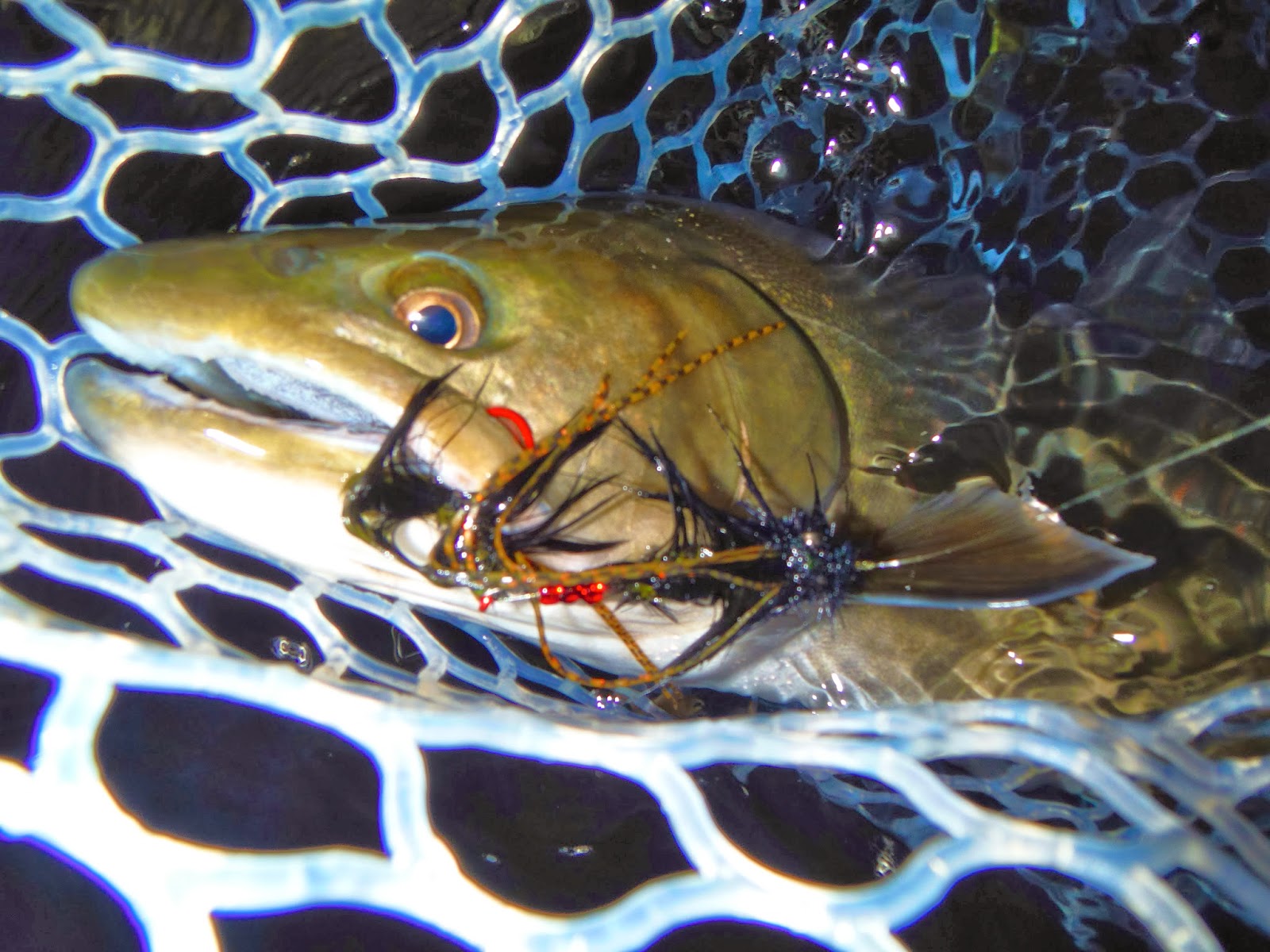 “My wife is not going to be happy!” Mark said, with a smile, “I caught it on the sex dungeon!” We both got a kick out of that, and it was also the first time we had seen Billie swimming around us.
“Billie? What are you doing here?” Mark said, as he took out the seven-inch streamer from the trout’s mouth, and held up his bull trout for a picture. 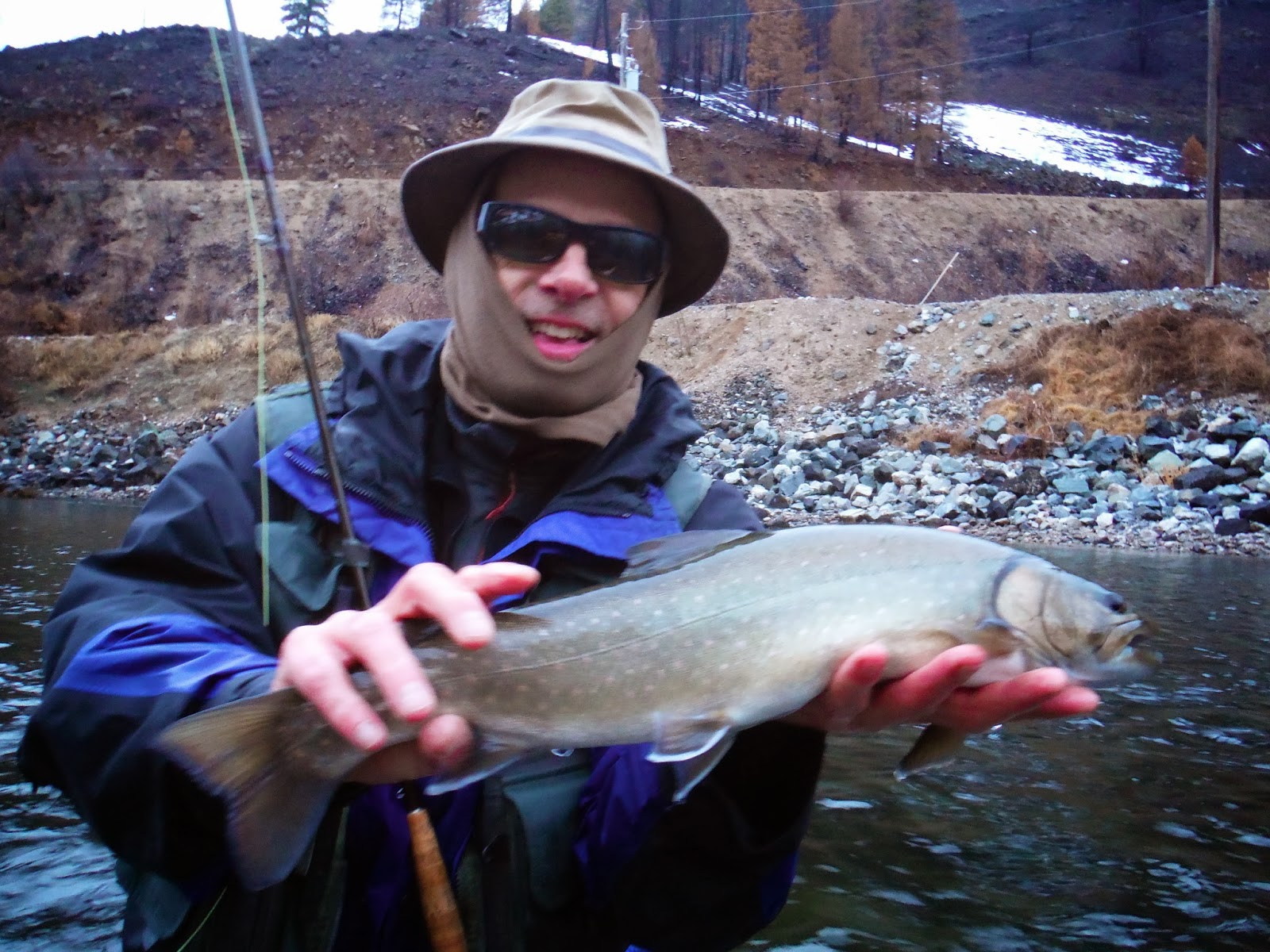 Mark placed the fish back into the water, and it kicked away.  His seven-inch sex dungeon, with a size two octopus stinger hook, casually drifted a few feet away downstream, attached to heavy leader.  I looked up just in time to see Billie swimming right over to the streamer, and in a second, bit down on it… 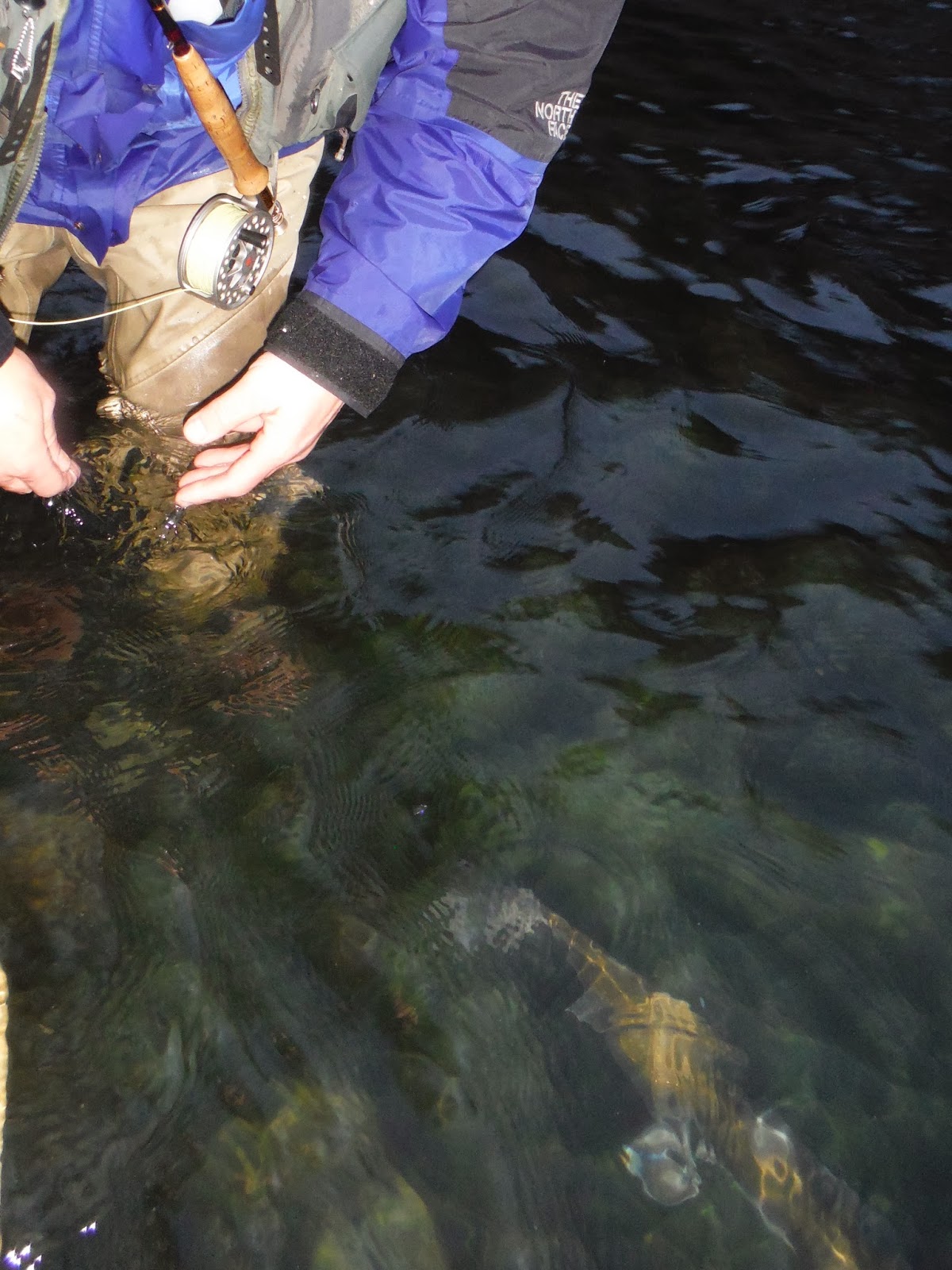 “MARK!” I yelled, simultaneously reaching over and dropping his rod tip. “Billie just ate your streamer!”
Mark took control of his fly line, adding slack, as Billie casually swam up to Mark, and placed the streamer in his hand.
“Awww, thank you, Billie.” Mark said, adding, “Stupid dog!”
“Well that ended better than I thought it was going to.” I said, as we both laughed with relief.  Billie had started for the shore line, and we followed, ending a tough day at the South Fork of the Boise.

1 thought on “Blown Out”