Skip to content
Both Terri Kowallas and I took off, southbound before the sun rose, toward the Duck Valley Reservoirs.  This was our first float tube trip and everything was packed… or so I thought.  When the sun started to shine I reached up to grab my sunglasses from the top of my hat, and found nothing.
“Oh no…” I said, checking my pockets franticly in hopes I had them stuffed in another pocket, but I knew better.
“What did you forget?” Terri asked, keeping his eyes on the road.
“On top of my security flipper strap, float tube pump, and extra stillwater fly box, now it’s my sunglasses.” I said.
“If I didn’t know any better, I’d say this was your first time fly fishing.” Terri said with a smile.  Truth of the matter is, I can still fish without all that stuff, but I hate not having my sunglasses.  Eye protection is my main concern, and the polarization of the sun glasses helps me spot fish in the water.  I was having my own little sunglass-pity-party on the 147-mile drive to Duck Valley. 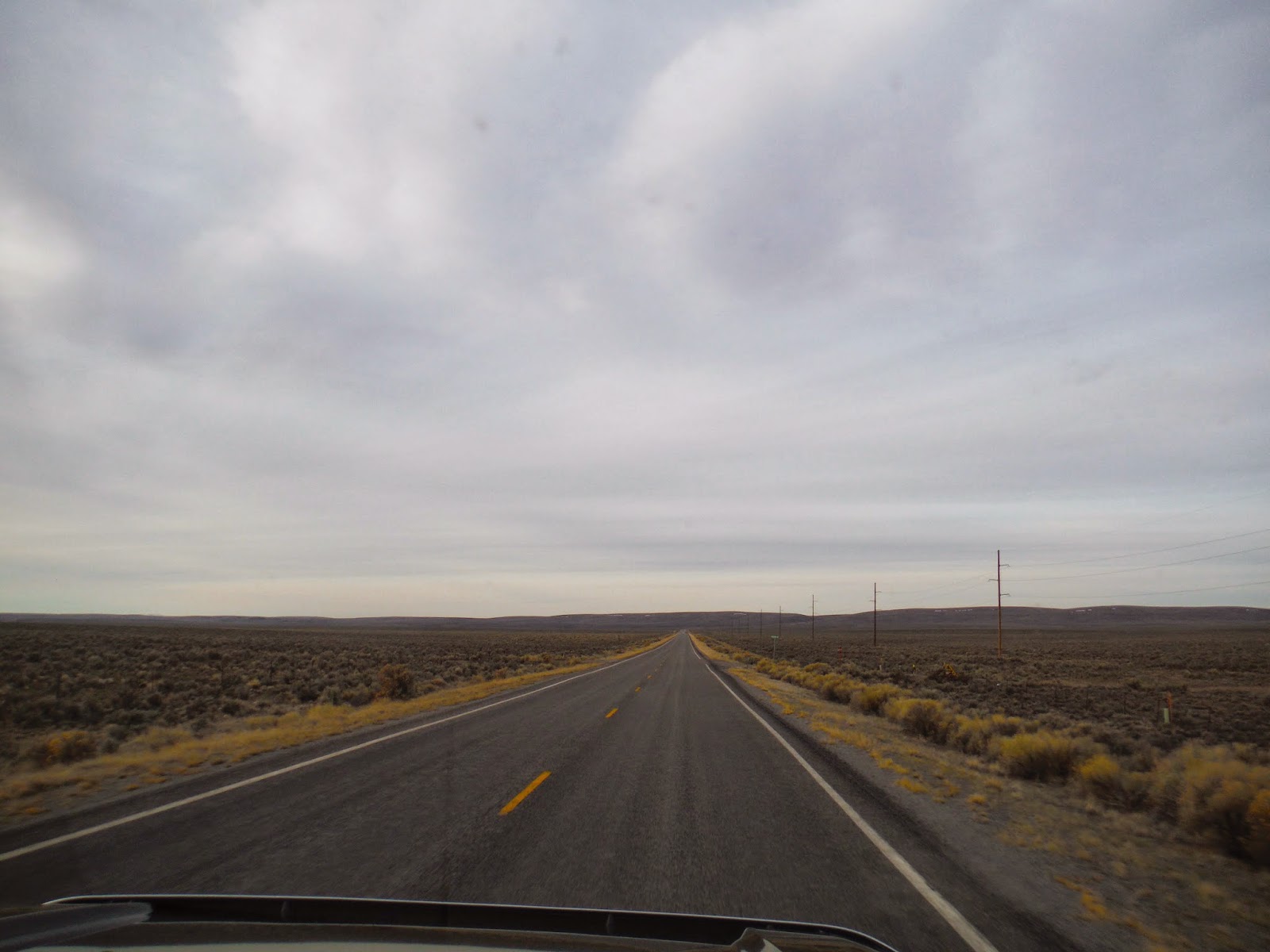 Terri drove to his favorite spot on Mountain View Reservoir, and we were in the water in no time.  Both of us were fishing with intermediate sinking lines and a two-fly set up.  Fishing started off slow for me, and after a while I thought to myself, what would stillwater guru Phil Rowley do?  I rigged up my leader, Phil Rowley style, maintaining the ability to throw streamers.  I did keep it sturdy by only dropping down to 3X tippet, and I added a few tag ends for a three fly set up that extended my leader to 18 feet.  I also did one more thing Phil suggested, which is really the BIG secret…  I paddled my happy self over to Terri, who had already caught three fish and asked, “What are you using?” 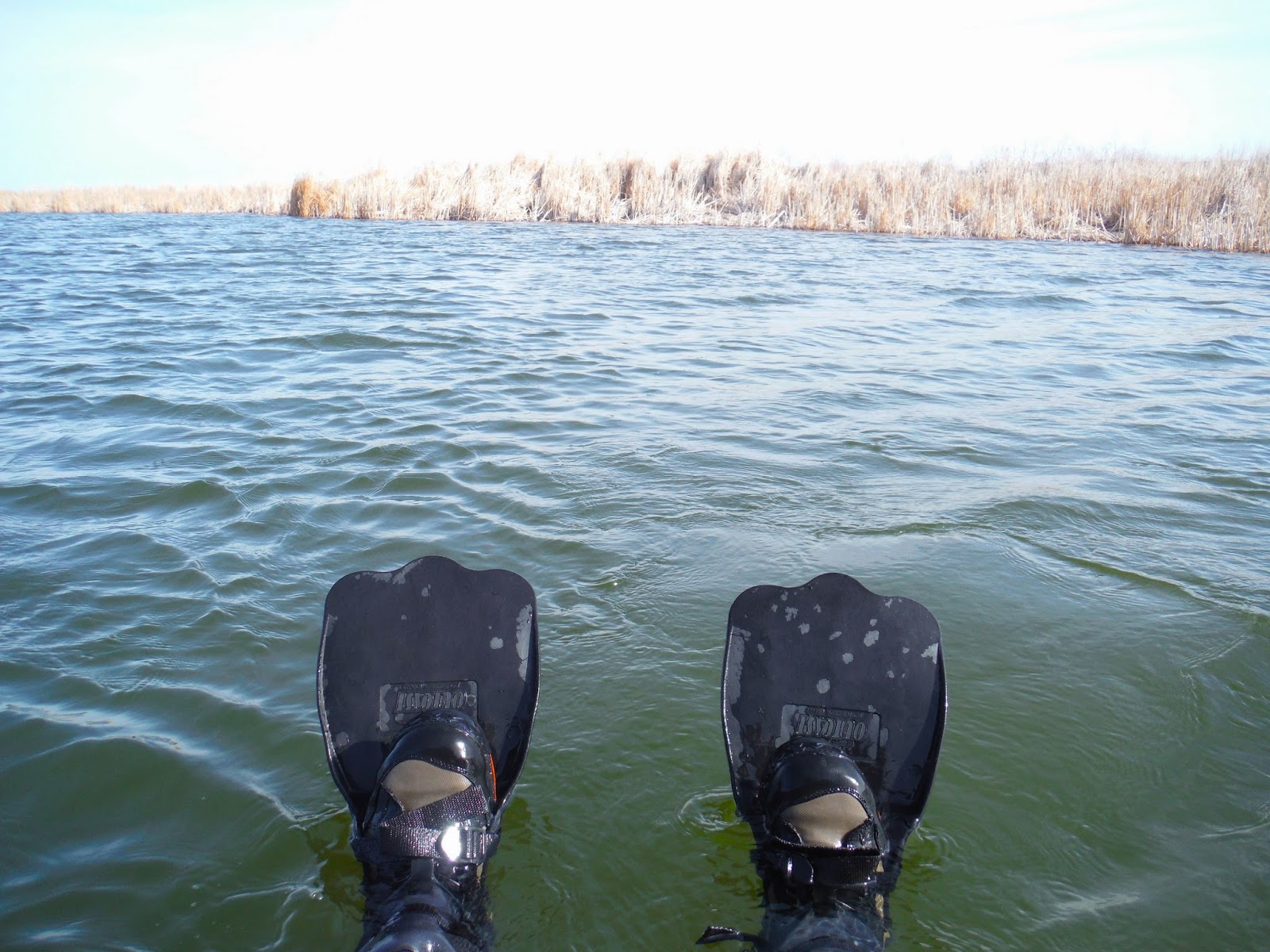 “I’ve been getting them on a California Leech.” Terri said, adding, “I did tie a few up, making up my own recipe.  It only took me a few HOURS to tie up six.”
“Six huh?”
“I take it you want one?” Terri said, as he took one out and handed it to me.  It was no more than a few casts later when a fish hit my fly!  As the fight went on, the fear of losing the fish started to overwhelmed me.  The fish was running deep and was putting up a great fight.  It swam under my feet and I did my best to keep my line from tangling up in my flippers.  One last pull with my ten foot five weight, and the fish was landed.  I quickly turned on my camera, held up my fish, and snapped a picture just before it flopped away; and this is what I have to show for my achievement. 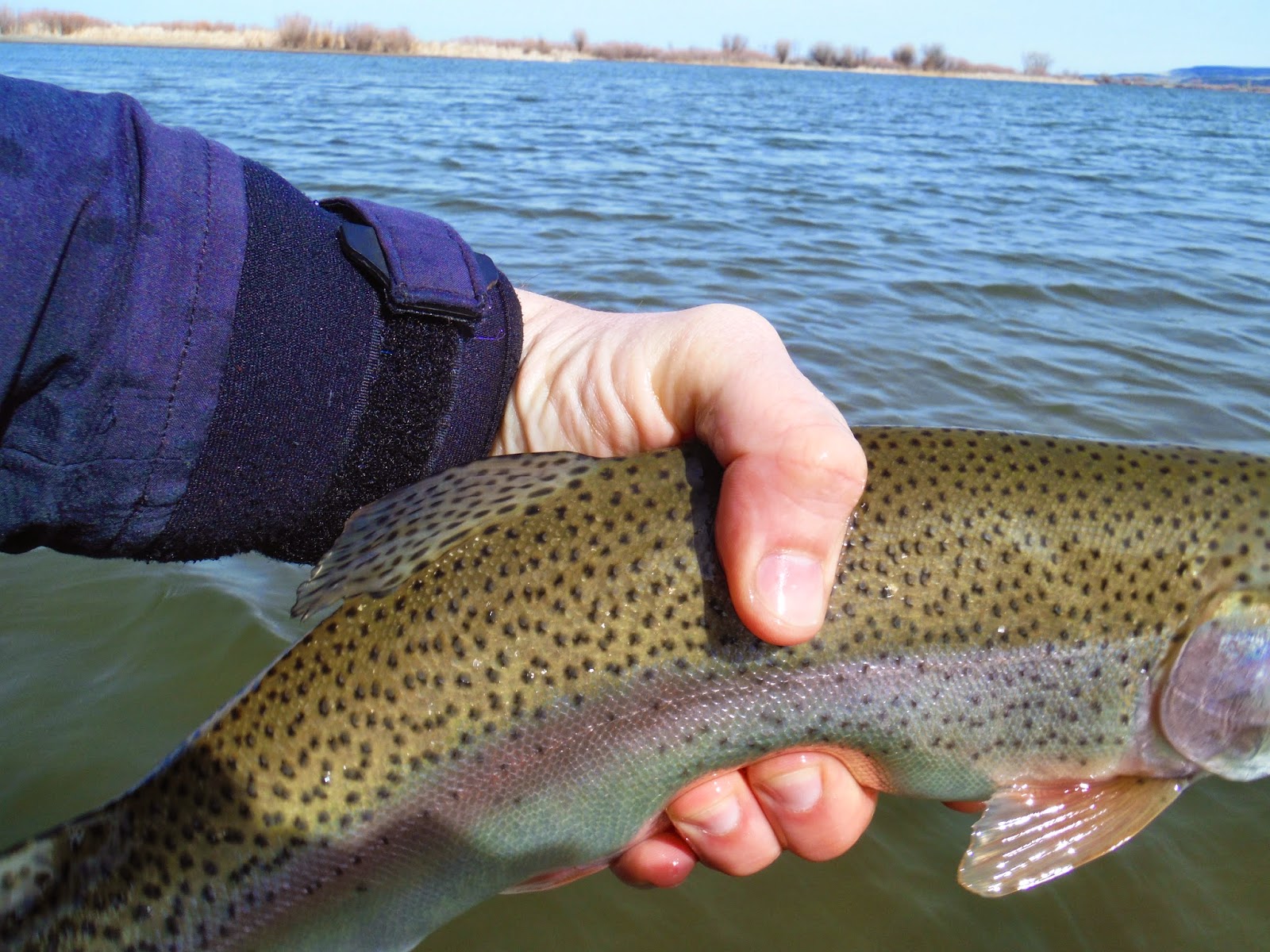 Turns out, during the fight, the fish managed to tangle my sinking line around my flippers, despite my efforts to keep that from happening.  I ended up retying my leader, and I was back to fishing. 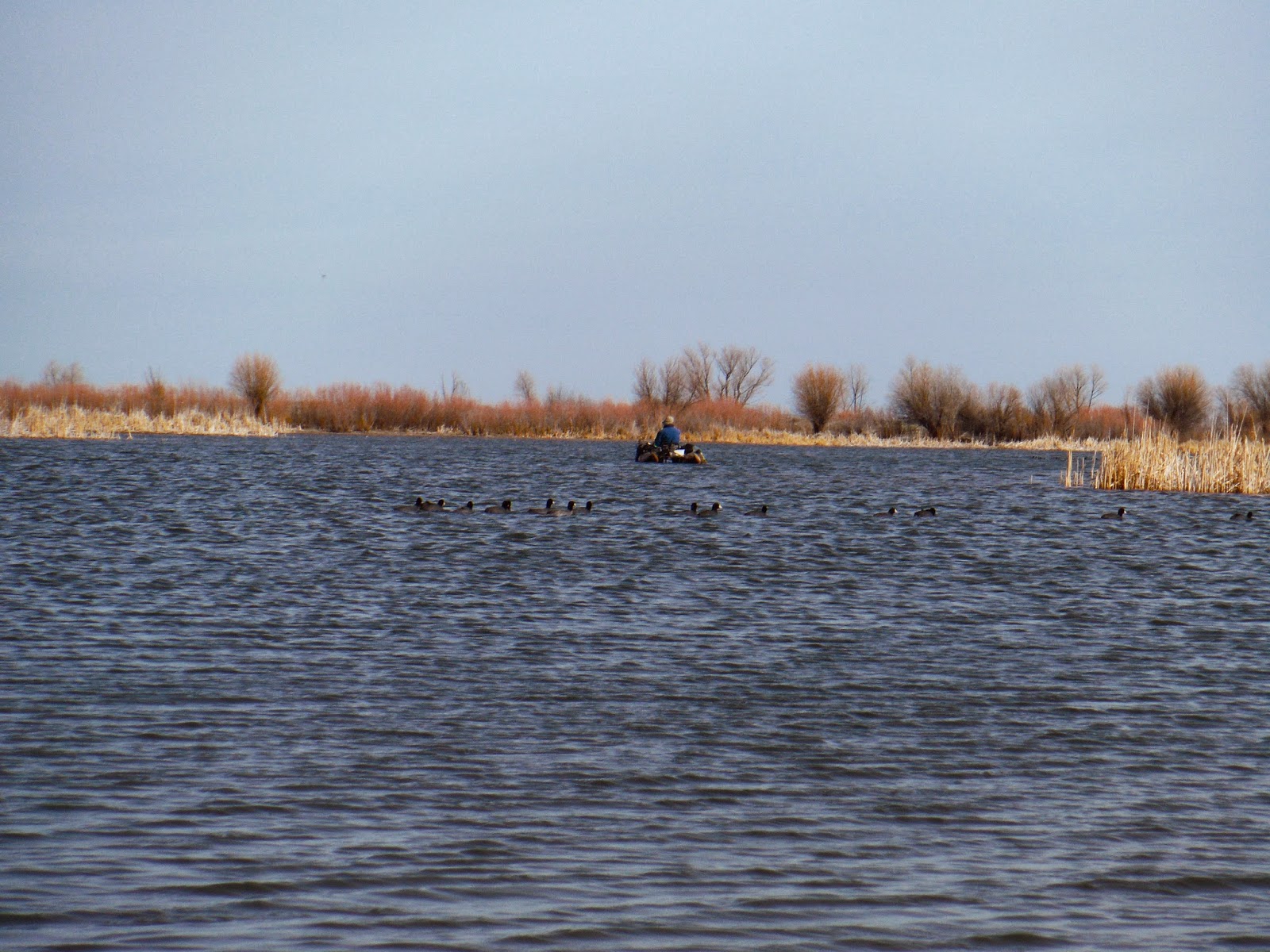 I counted to 15 after my fly line hit the water, and then started my slow retrieve.  I kept my fly rod tip in the water, pointing it at the flies; this allowed me to feel every hit I encountered.  Sure enough, at mid-strip, I felt some resistance and quickly set the hook! 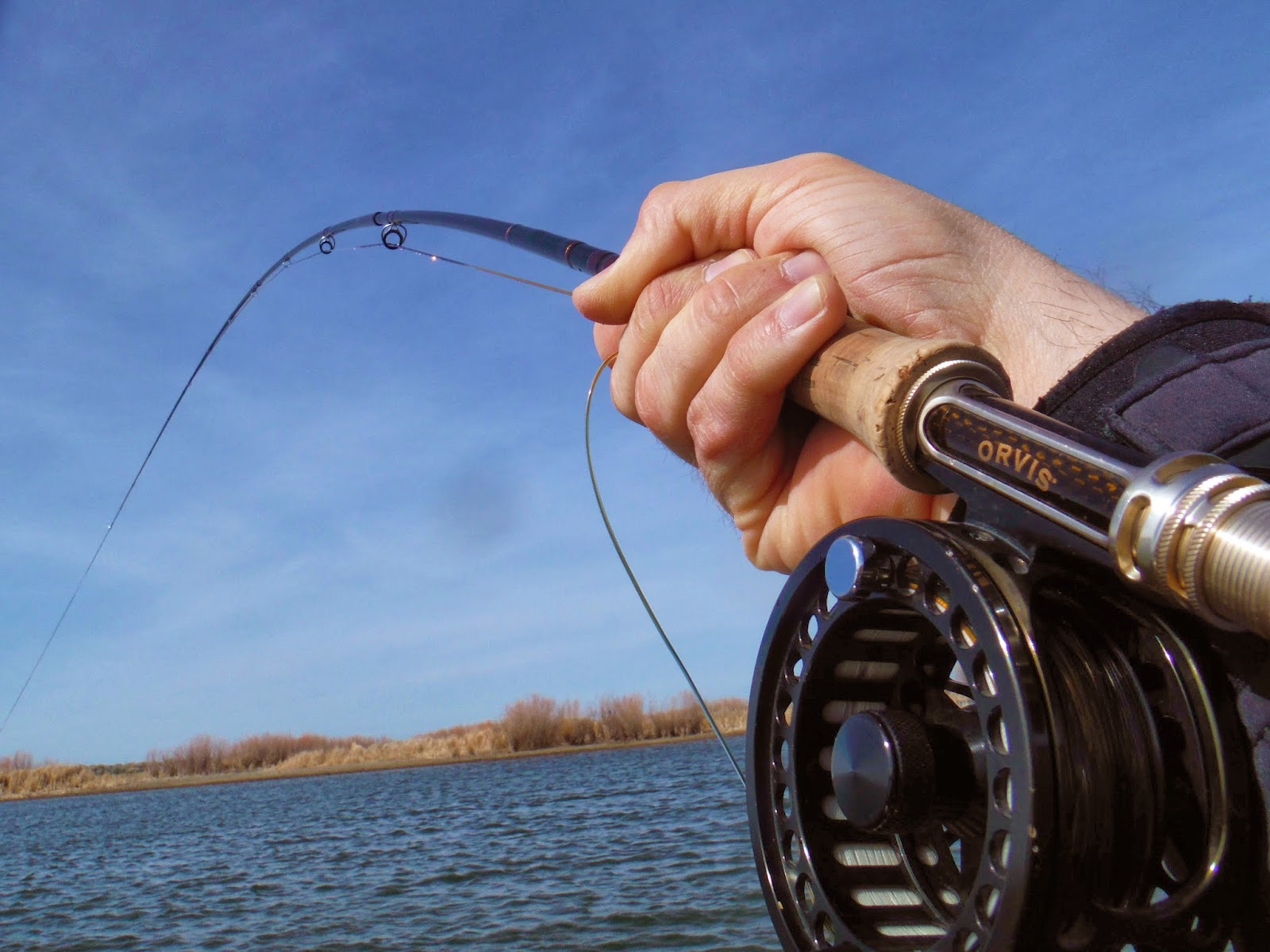 A snag, damn!  I kept my line taught as I paddled over to my snagged flies, hoping they would come loose.  I reached out with my fly rod and felt my flies come loose, but only for a second.  I felt another snag and wrenched on my fly, frustrated.  And that’s when it started to fight back.
“A FISH!” I yelled as my line started racing away.  Lucky duck, I thought as I brought in another fish relatively quickly, because the fish was so close to begin with. 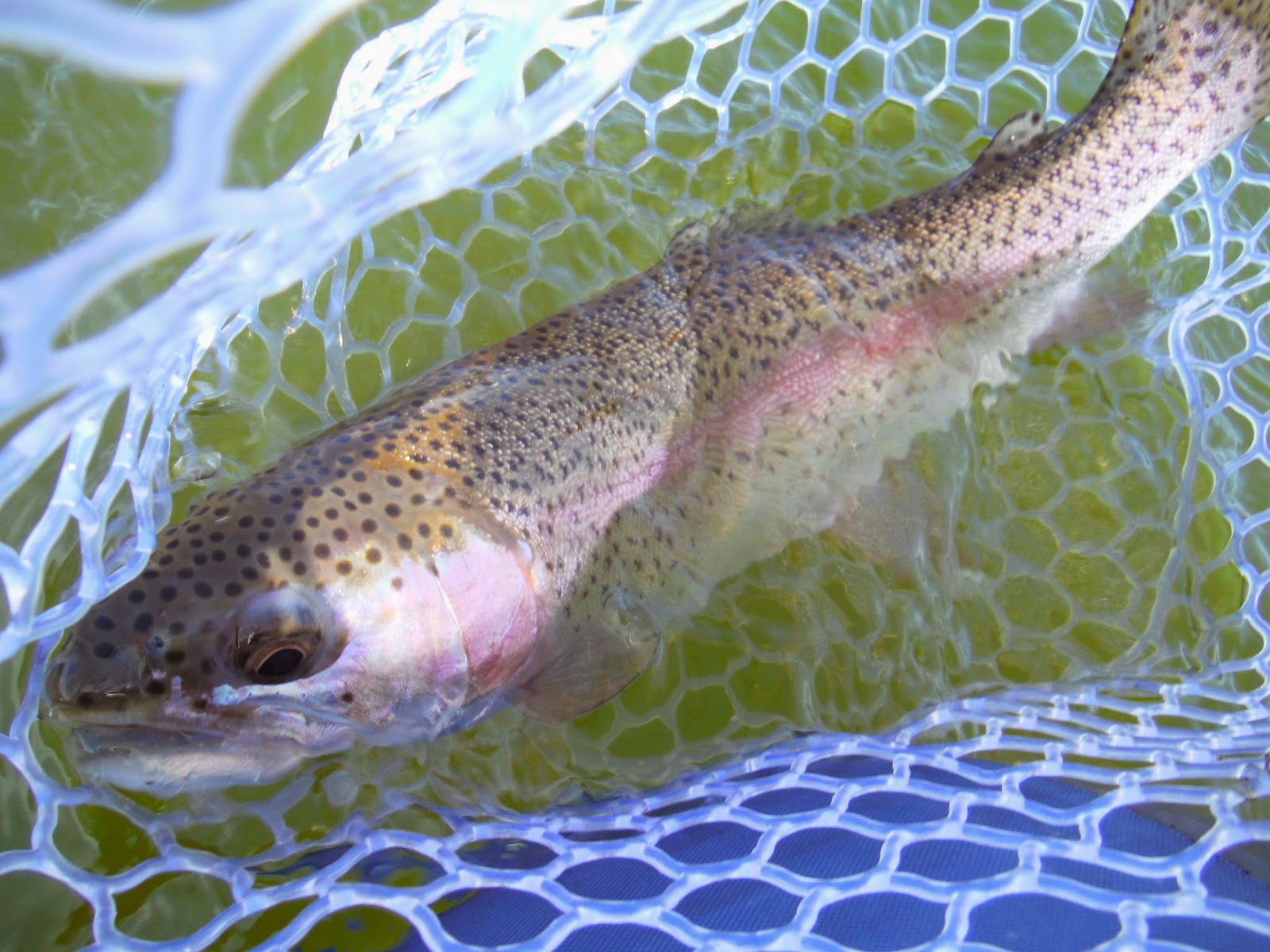 I was unaware that the wind had picked up and blown me further away from my previous spot while I was snapping pictures of my fish.  It always amazes me how unaware I become of everything else when there’s a fish in my hands. 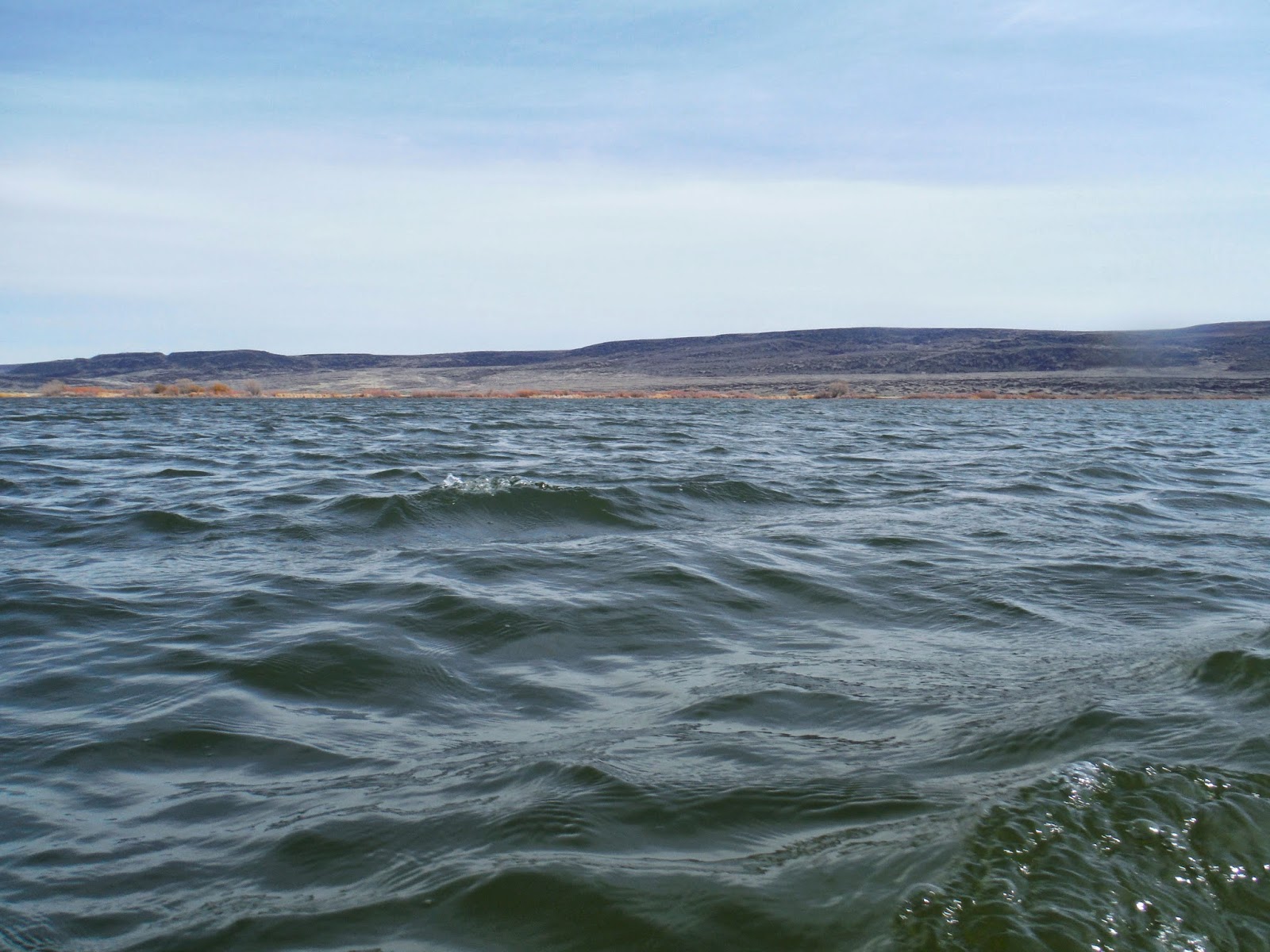 When I looked up, I noticed that I was close to Terri.
“How are you doing?” I yelled over to him.
“I’ve caught about eight so far! How about you?”
“Two for me.” I said back to him, adding, “Are you still using the California leech?”
Terri couldn’t reply, because just when I asked a fish took his fly! 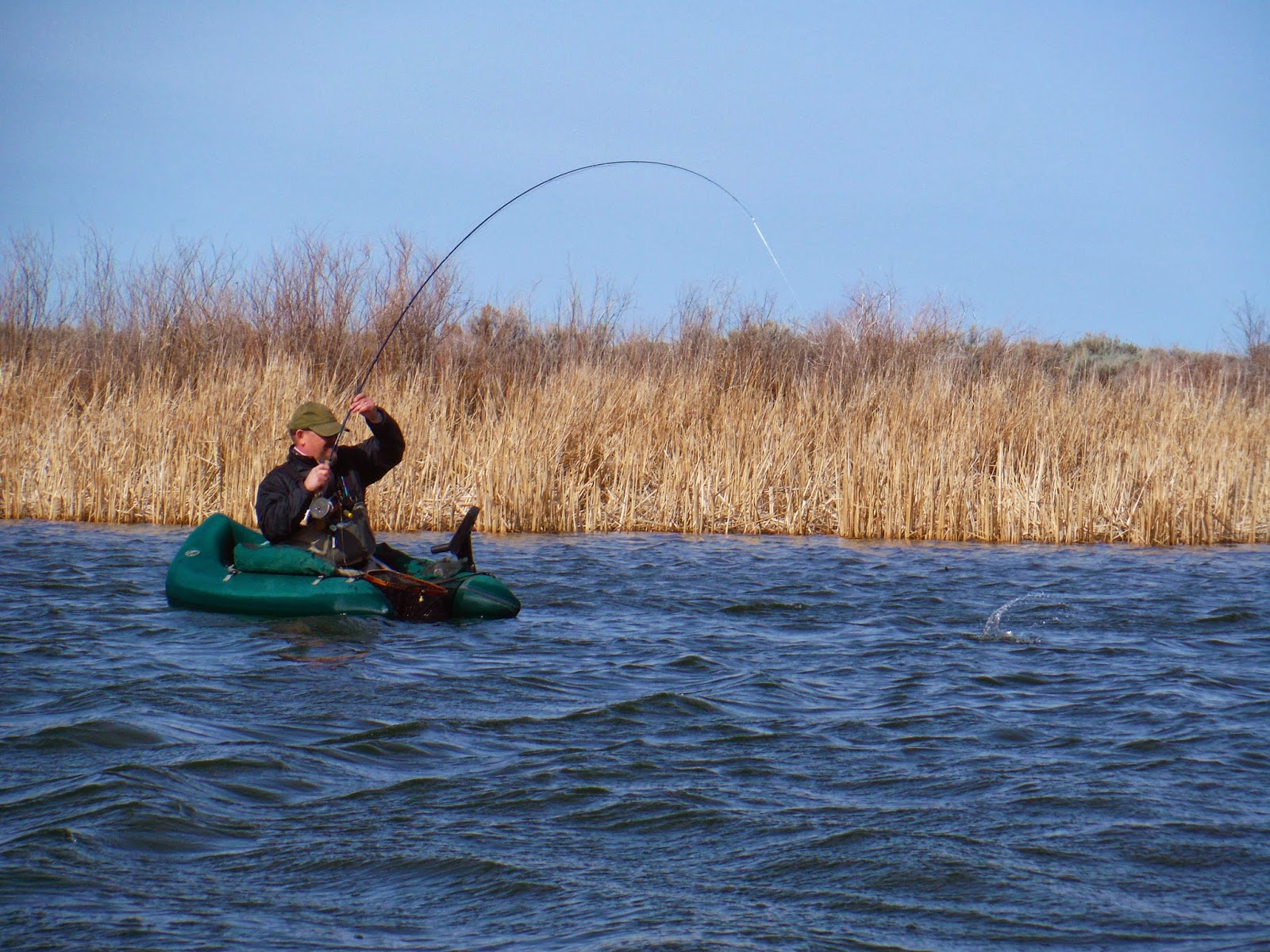 “Get ‘em Terri!” I yelled out with enthusiasm as Terri fought the fish.  The jolts from his fly rod indicated that the fish was not going to give up easily.  Terri kept pressure on the fish while he got his net out.  The fish made another run, only this time instead of swimming away it swam around Terri, so that the fish ended up behind him. 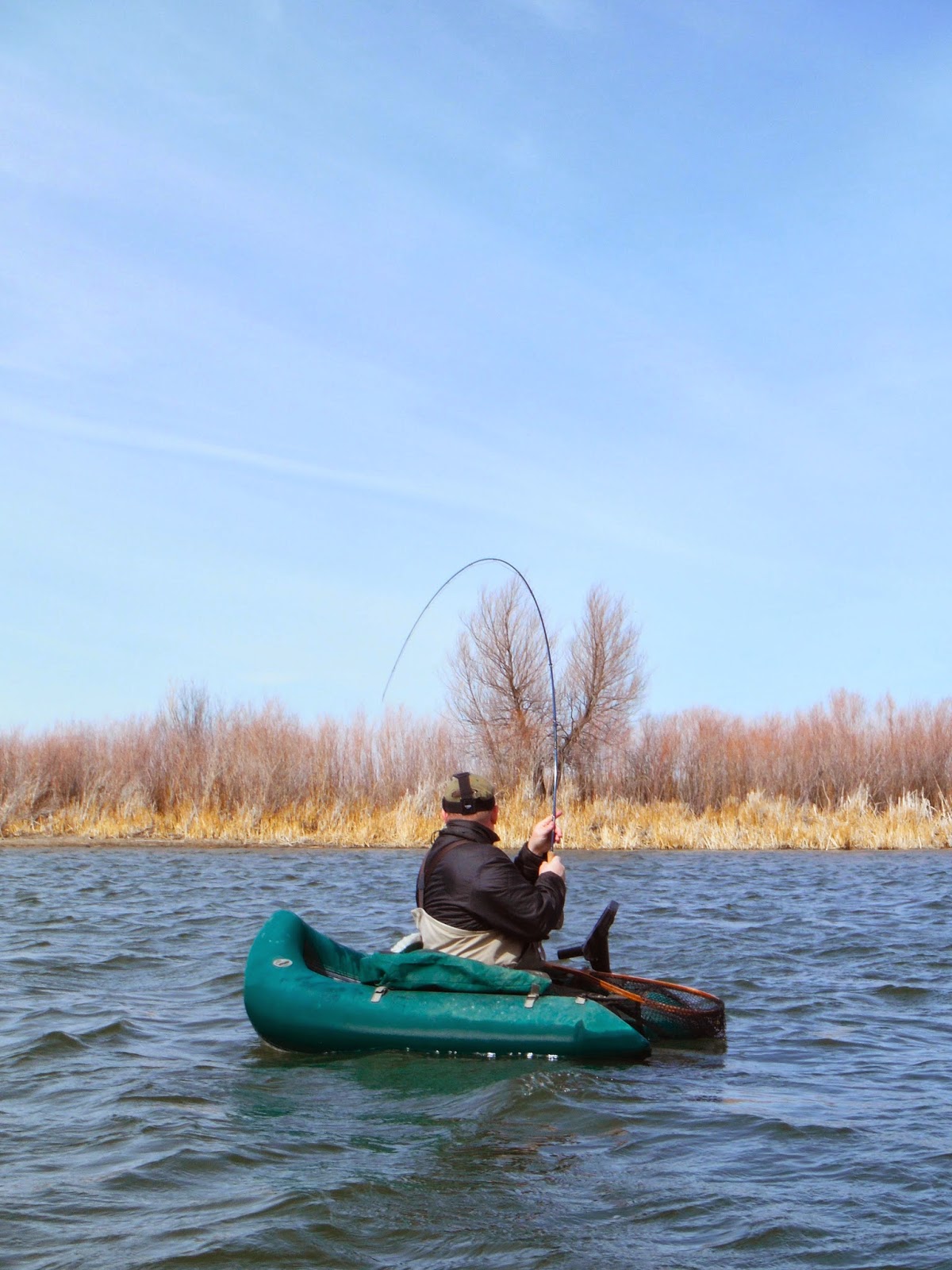 Terri made some quick adjustments, and he was back to facing the fish.  The fish was done.  I watched as the head of the fish was pulled out of the water towards Terri’s net. 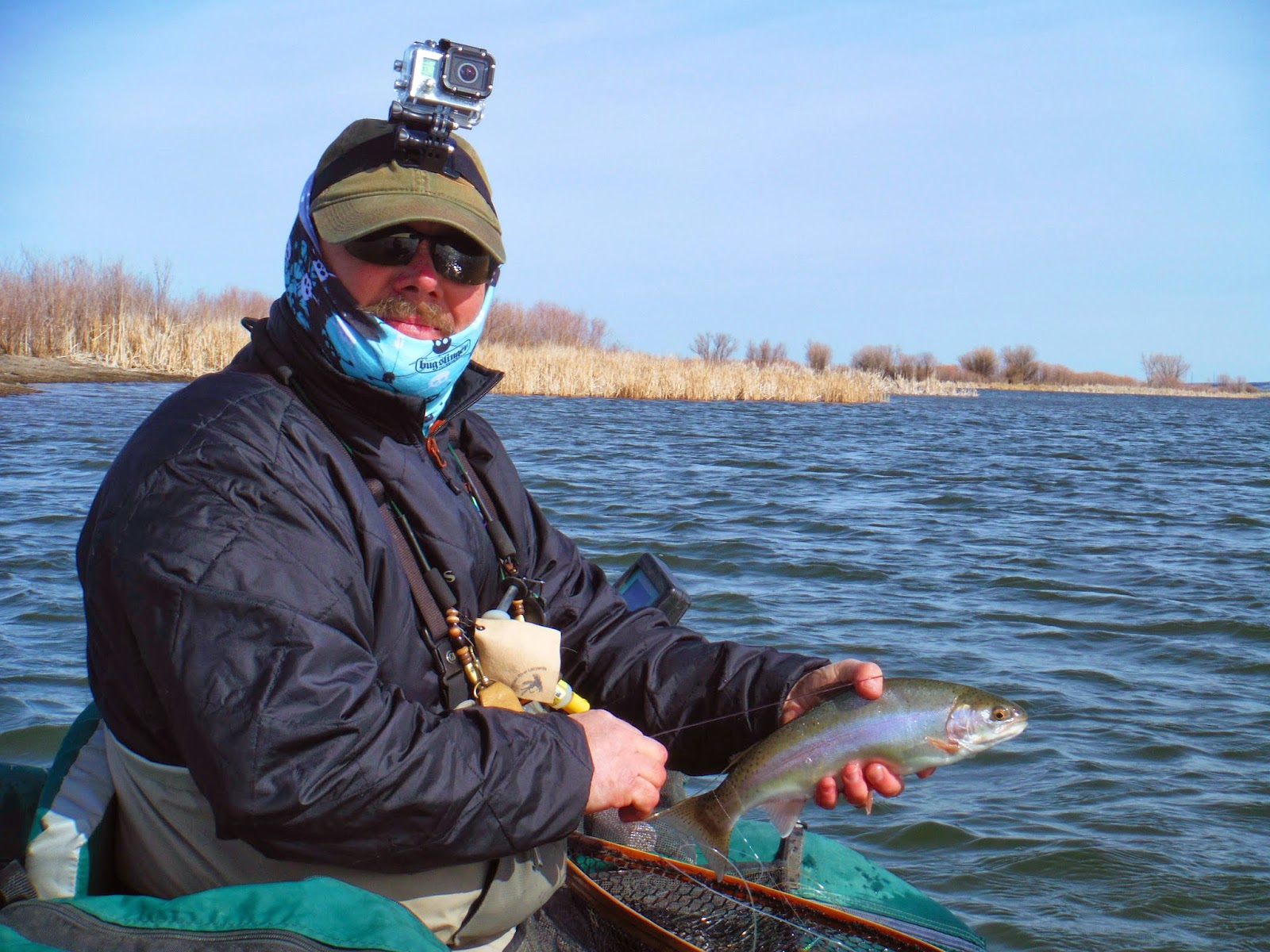 “Was your GoPro on?” I asked as he released his fish.
“Nope.  Every time I turn it on, I don’t get a fish… So I just leave it off.” he said, matter-of-factly.
“Good choice.” I said, as I was retrieving my line, and felt it pull away from me.  I locked the line down with my finger, and set the hook on a fish.  Splash!  Splash!  The fish leapt out of the water over and over.  It made a run towards Terri, who just watched as the fish jumped out of the water, inches from his face.
“I should have had my GoPro on!” Terri yelled as I brought the fish into my net. 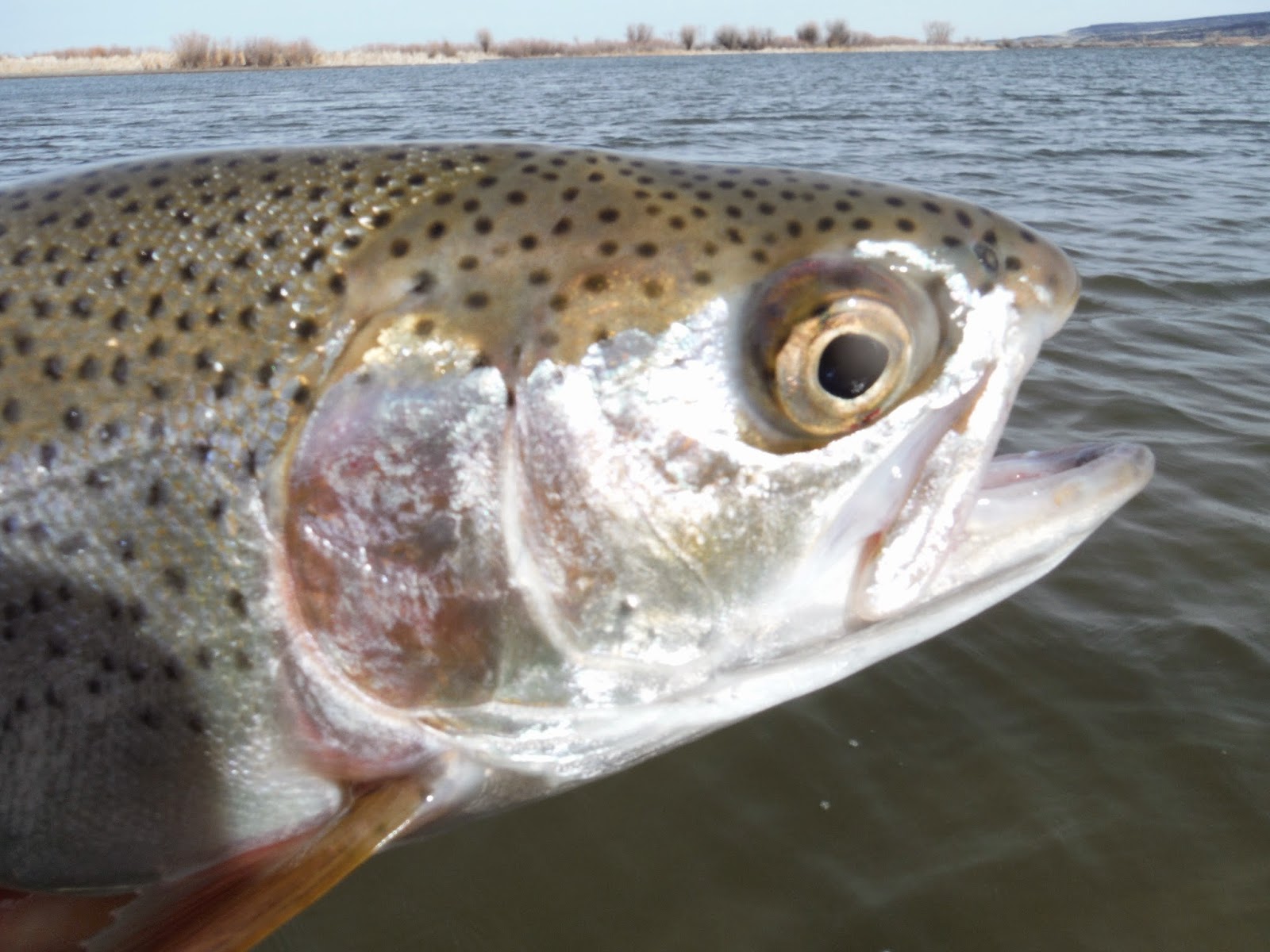 “I almost thought that fish was going to land in your float tube!” I said to Terri.
“So did I.” Terri said, adding, “I could have caught it in the air… if I was fast enough.”
Terri kicked away as I went back to fishing.  The wind had picked up hard enough that if I was to stop paddling, I would end up blowing away.

Casting in between wind gusts, I was stripping my line in slowly when I felt the hit of a fish!  The wind whistled through my taught fly line as the weight of the fish tugged at my rod.  I pulled in some line, but the fish ripped it back out.  My reel screamed as the fish ran, but I was fighting back, keeping the fish from having the leverage.  It’s a nice fish, it has to be… I thought as I brought it in closer; or it’s snagged… this dreaded thought always crosses my mind.  The fish was close, but running deep.  My fly rod looked like a horseshoe as I applied the torque to raise the fish from the depths.  The large flash of chrome I saw as the fish got closer to the surface confirmed I had the fish in the mouth, and that it was a nice sized fish.  My net slipped under the fish, and it was now apparent that I had a football for a fish! 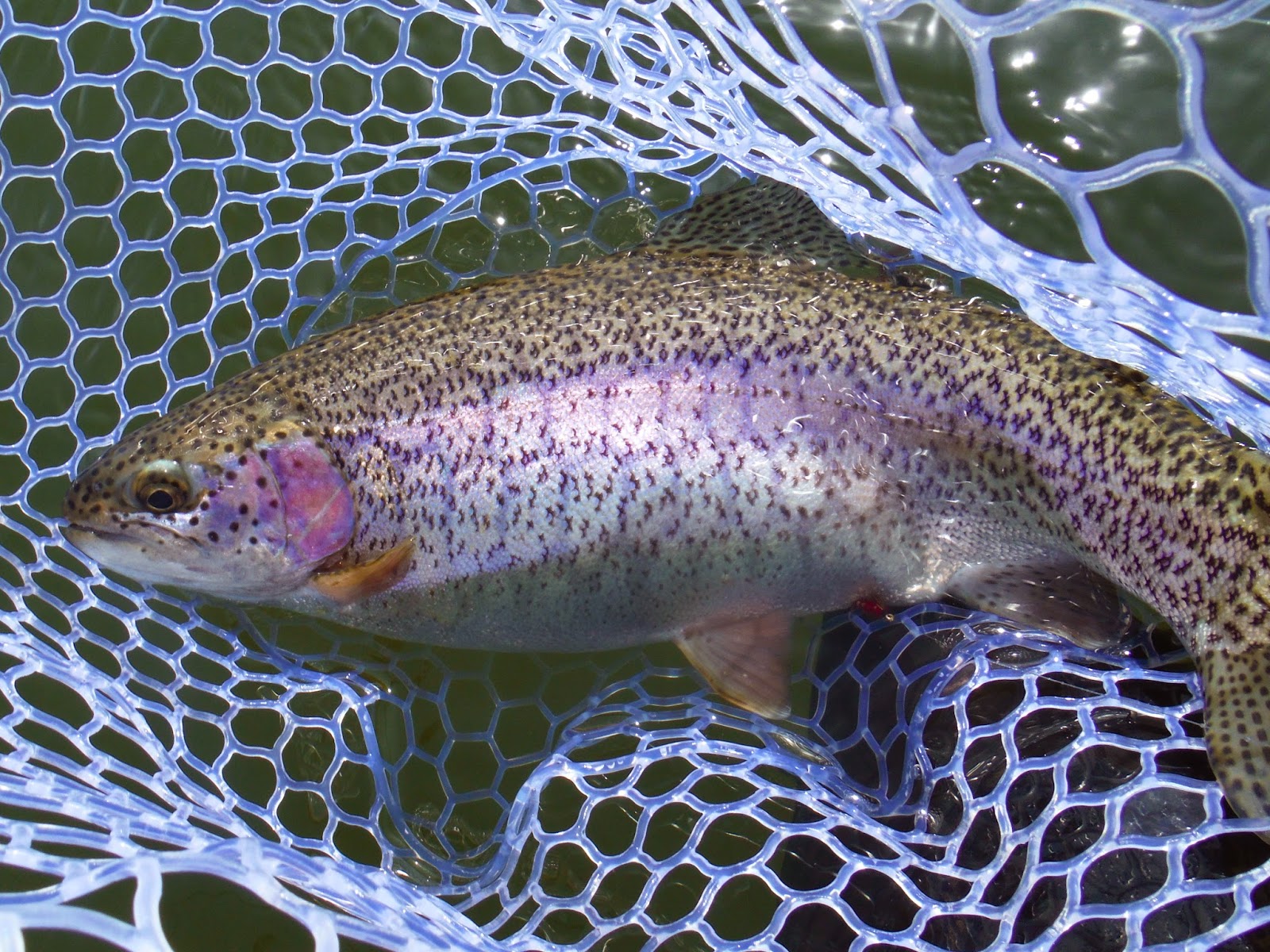 “You’re a nice fish!” I said, as I looked up to see if Terri was around to take a picture.  I spotted him in the distance, too far to call over for a picture.  I looked down at my fish to enjoy it one last time, took a few pictures, then slipped it back in the water. 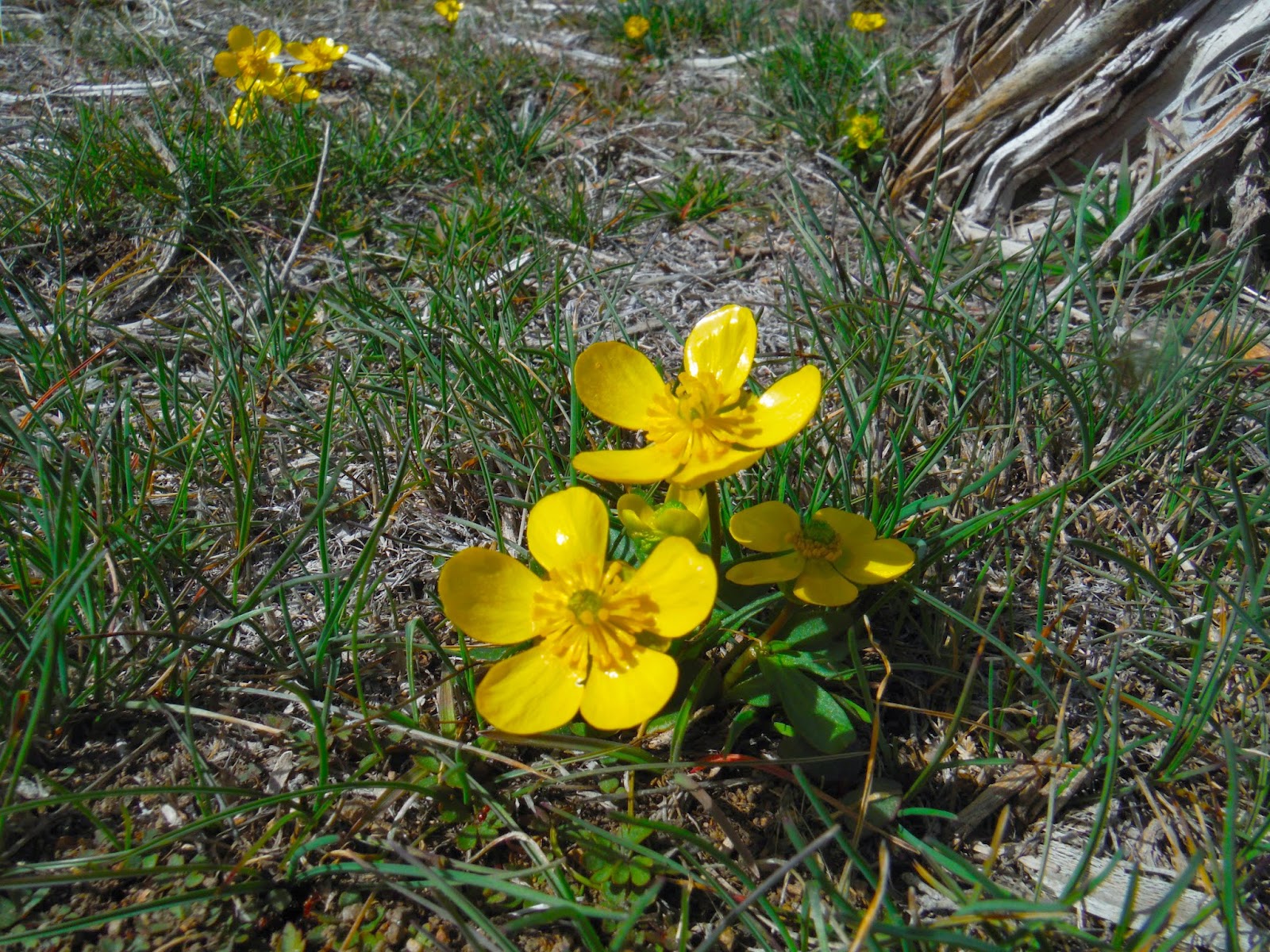 White caps lapped over the water as I worked my way back to Terri’s truck.  Terri was working a cove, trying to keep out of the wind.  With the roar of the wind, I could hardly hear him yelling at me.
“Have you had enough fun for one day?!”
“I think so!” I yelled back.  Terri paddled his way back, and we both got out and walked back to the truck a little sore.
“You’re getting old!” Terri said, as he also hobbled back to the truck.
“You really nailed them today, Terri.” I said to him, as we got into the truck.  The day treated us okay, as far as fish are concerned, but it really slowed down at the end of the day.
“I think I caught six more fish that you did today!” He said, smiling at me.
“Not that anyone is counting…” I said back to Terri.  We drove home exhausted from paddling in the wind, and with sunburnt faces.  Having a sunburn that covers only the middle portion of your face is an all-to-familiar sign of a serious neglect of sunscreen; still, we wore them proudly.