Skip to content
The opportunity to fish a private pond doesn’t happen often, so when it does, any plans set forth for that day are canceled, because you know it’s going to be good!  John invited me to tag along early in the day and, while at work, I had practically made myself sick with anxiety to go fishing.  The large pond off North Linder Road is usually gated off, but today it was open to fishing for volunteers helping out with the Idaho 2 fly event.  By the time I arrived, there was a line of vehicles with volunteers hoping to meet with Ron Sali about the upcoming event.
Ron Sali is the owner of the Three Rivers Ranch in Eagle, ID, and was kind enough to allow the Idaho 2 Fly Organization to utilize his trophy bass and trout ponds to help raise money for their cause. All proceeds are used towards hosting fly fishing-related activities for men with cancer and life impacting illnesses.  We all gathered around as Ron went over how to best run the 2 Fly Derby, before we finally hit the water. 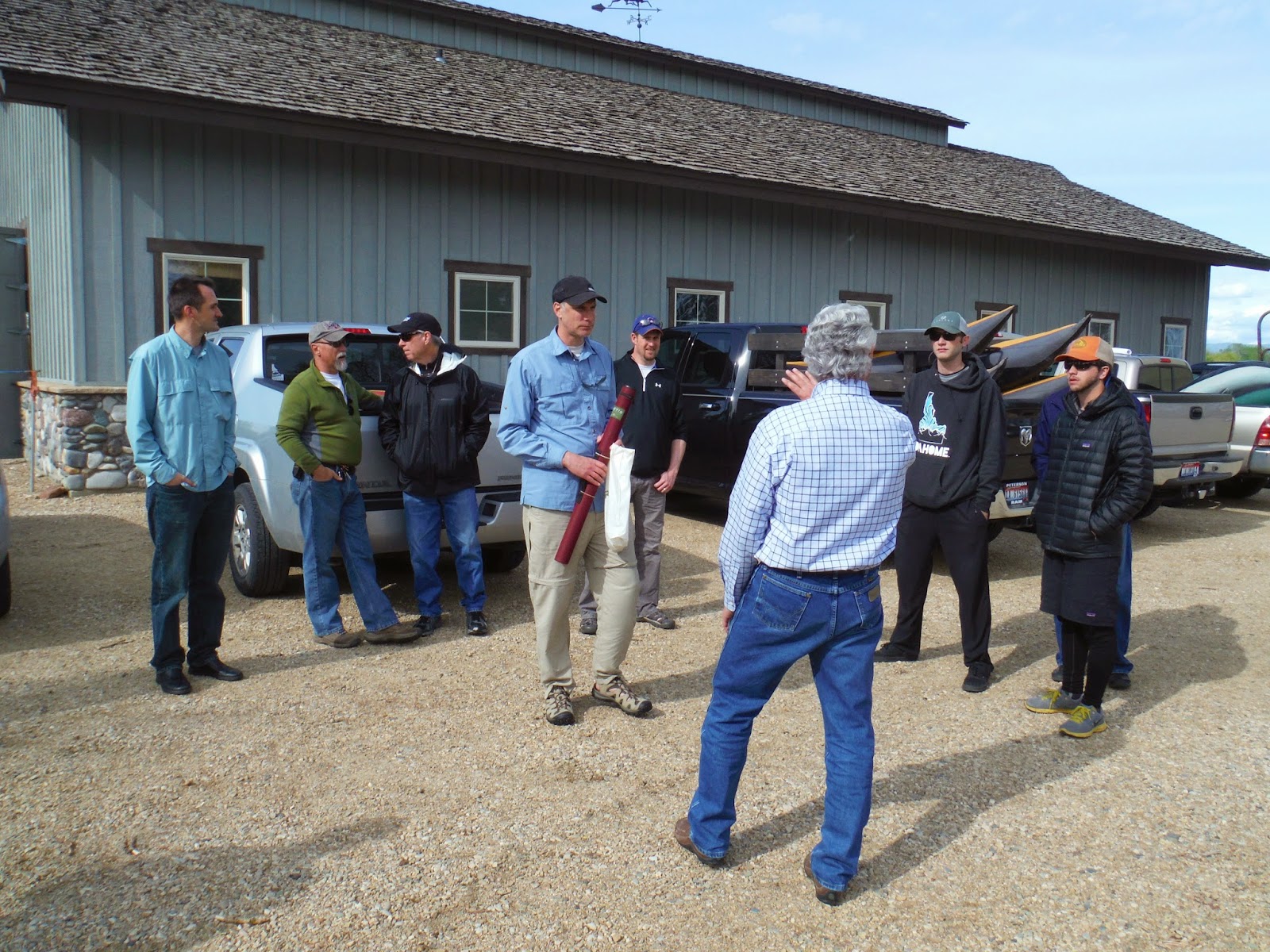 Bass-y is a term used in fishing to describe an angler seeking out a spot on the water that looks as if a bass may be holding.  Before we had even set foot on the water, Wess Atkinson pointed out a large bass roaming the bank.  Though it is a bit early, I flicked out my popper to the bass, which looked interested, but did not take.
With a floating line, I switched flies to a Gourley Special and flung it out to some bass-y looking water.  The fly slapped the water, and I pointed my rod at the fly and started to strip.  WHAM!  A bass took, and it was pissed!  With all the commotion it was making I never had to yell fish on, because anyone in ear shot could hear the fish splashing.  Idaho 2 Fly’s camera guy, Mark Walters, came running with his camera and was nice enough to take this shot of me with my fish. 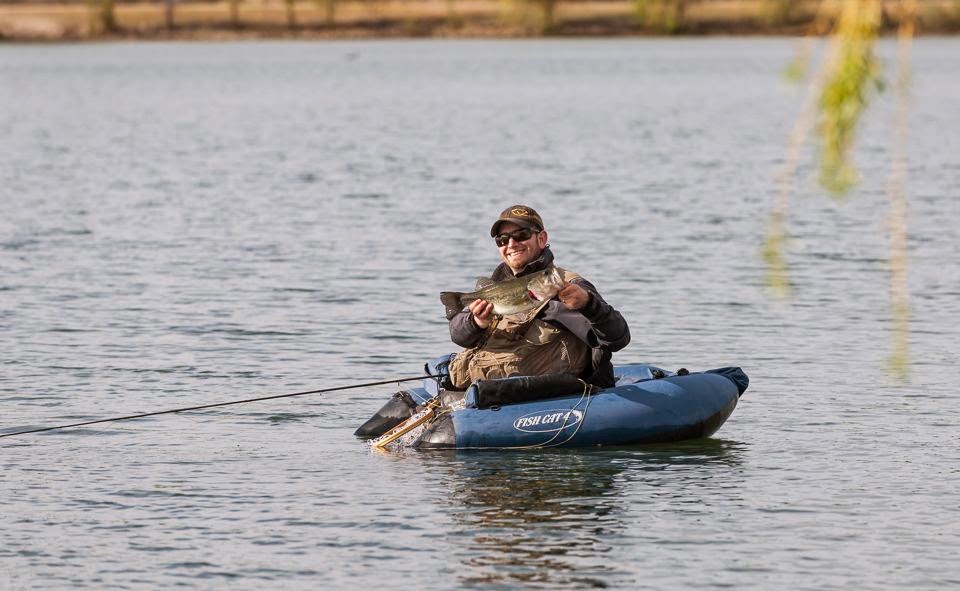 The Gourley Special struck again, with another quick retrieve. Mark wasn’t even able to take a few steps away before I had hooked into another fish.  I held up my fish for another picture, and Mark happily obliged. 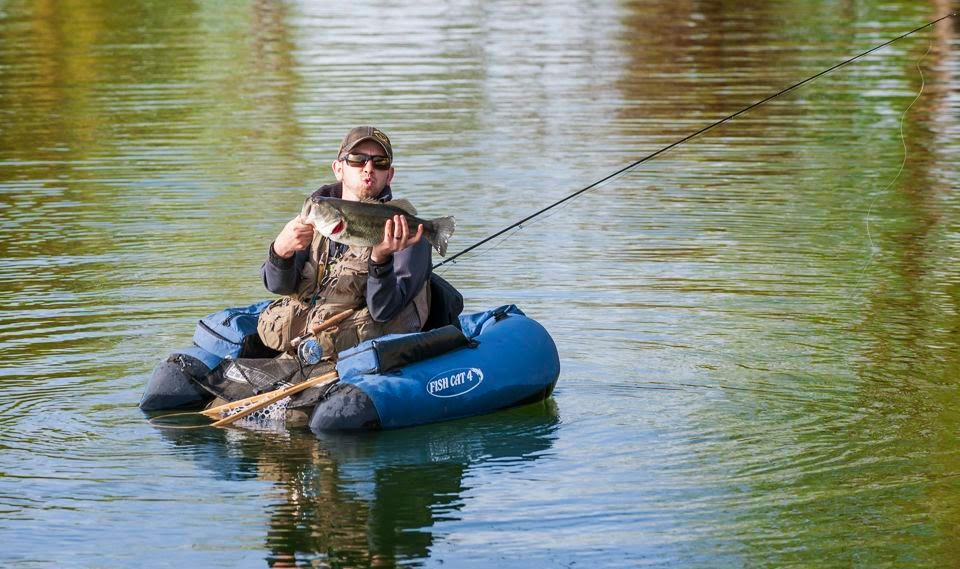 With a kick that sent water in my face, my bass swam off.  Mark stood by waiting for another fish, and I didn’t let him down.  The small fish wasn’t much of a prize after the first two, so I quickly unhooked it and let it go.
“There are some big ones over by those rocks that are only chasing the flies thrown at them, Erik!” Mark yelled to me from the bank, and pointing to the rock structures just before he started his walk back.
“Ok!” I yelled back, as I fished my way over.  It had been cold the last couple of days, which can really turn bass fishing off.  Not feeling I was capitalizing on my current rig, I quickly switched my fly line to a #3 sinking line, while keeping on the Gourley Special.  Fred Herbert was fishing from the bank, and had brought in a fish just as I showed up. Mark was there with his camera to capture the moment, as I pulled line from my reel. 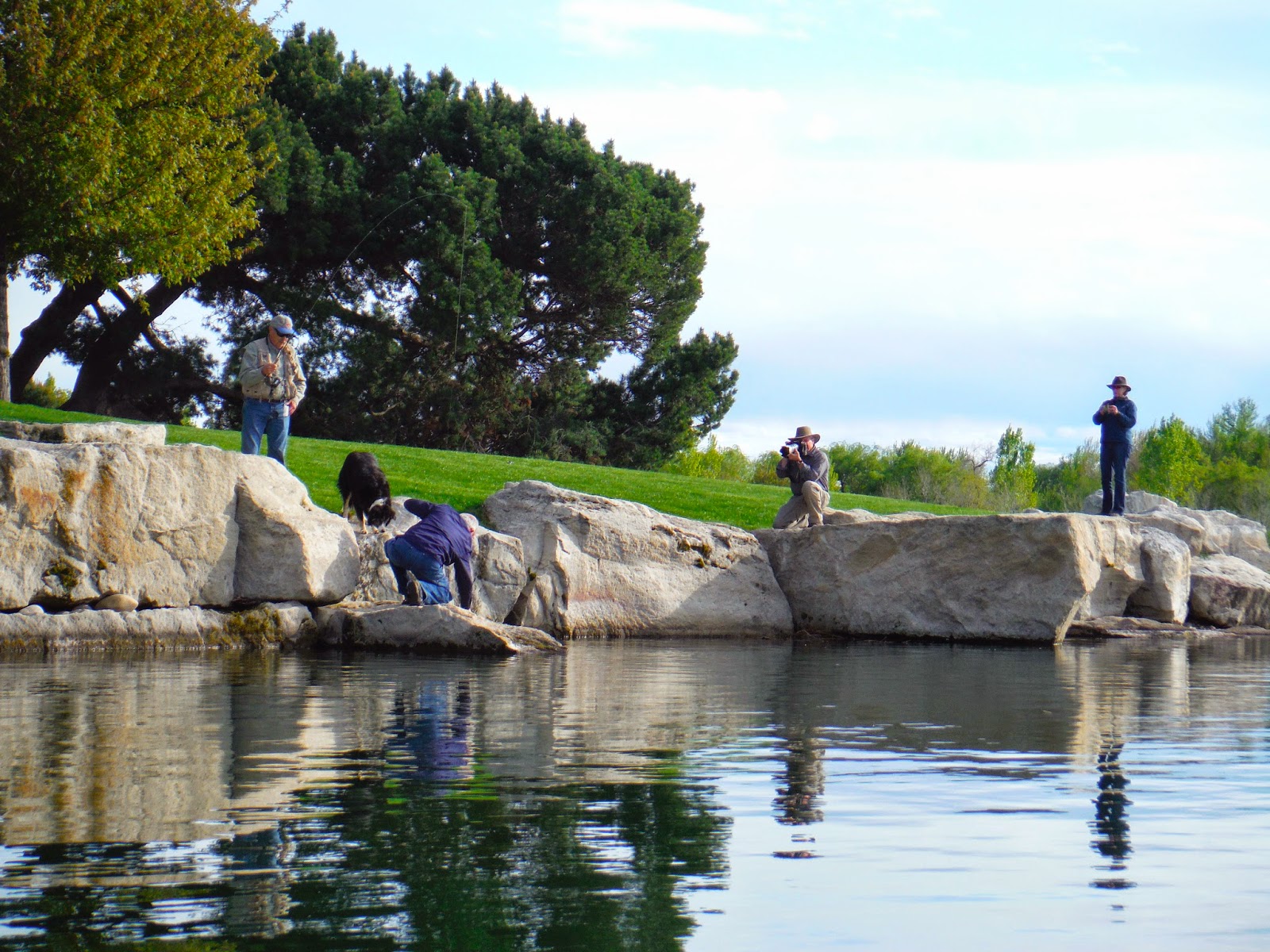 I launched a cast near the rocks and my fly hit the target.
“They are looking at it!” Mark said, as he stood looking down into the water.  I stripped my fly back to me and pitched out another cast.  This time I counted to ten, allowing time to let my line and fly sink deeper than before. At the count of ten, I stripped in as quick as I could, springing my fly to life.  Two strips was all I got before I felt the incredible tug of a bass. 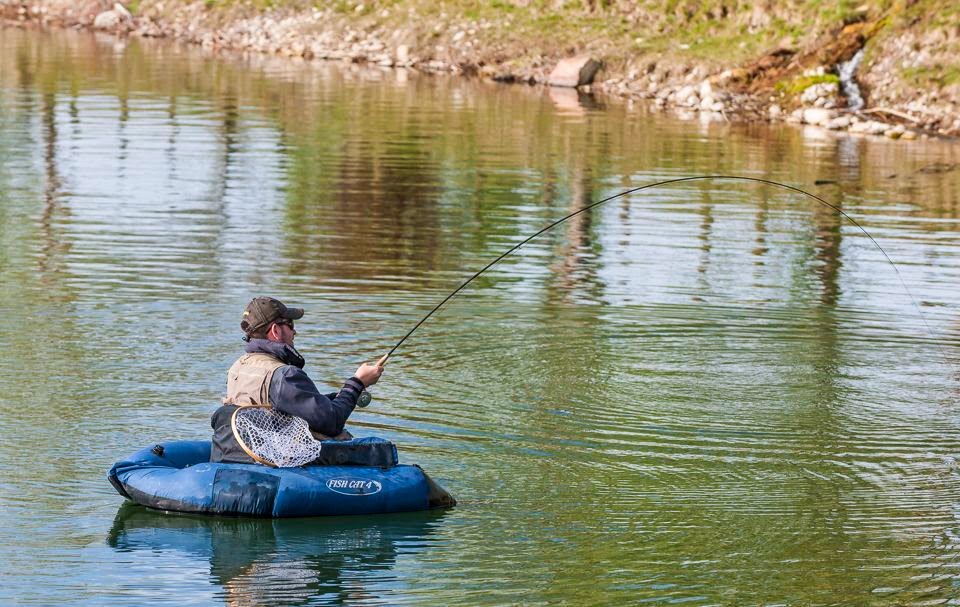 The bass was fighting hard, but I wasn’t easing up.  I kept the pressure on the bass as it did everything it could to get away. Finally I brought it up close enough to the surface and got a glimpse.
“It’s a monster!” I said under my breath, as I reached for my net.  Just as I had one hand on the rod, the bass bolted deep, forcing my fly rod under water.
“Whoa!” I heard a spectator say, but I couldn’t see who it was because, at that moment, the only portion of my rod that was out of the water was the handle. My rod was at the breaking point as I pulled it out of the water, regaining control. The bass was now close enough to the surface, and started leaping out of the water.  With haste, I grabbed my net while leaning back, adding torque to my fly rod and bringing the fish in close enough to net it. The mouth alone was so big  on this fish that I could easily stick my fist into it. 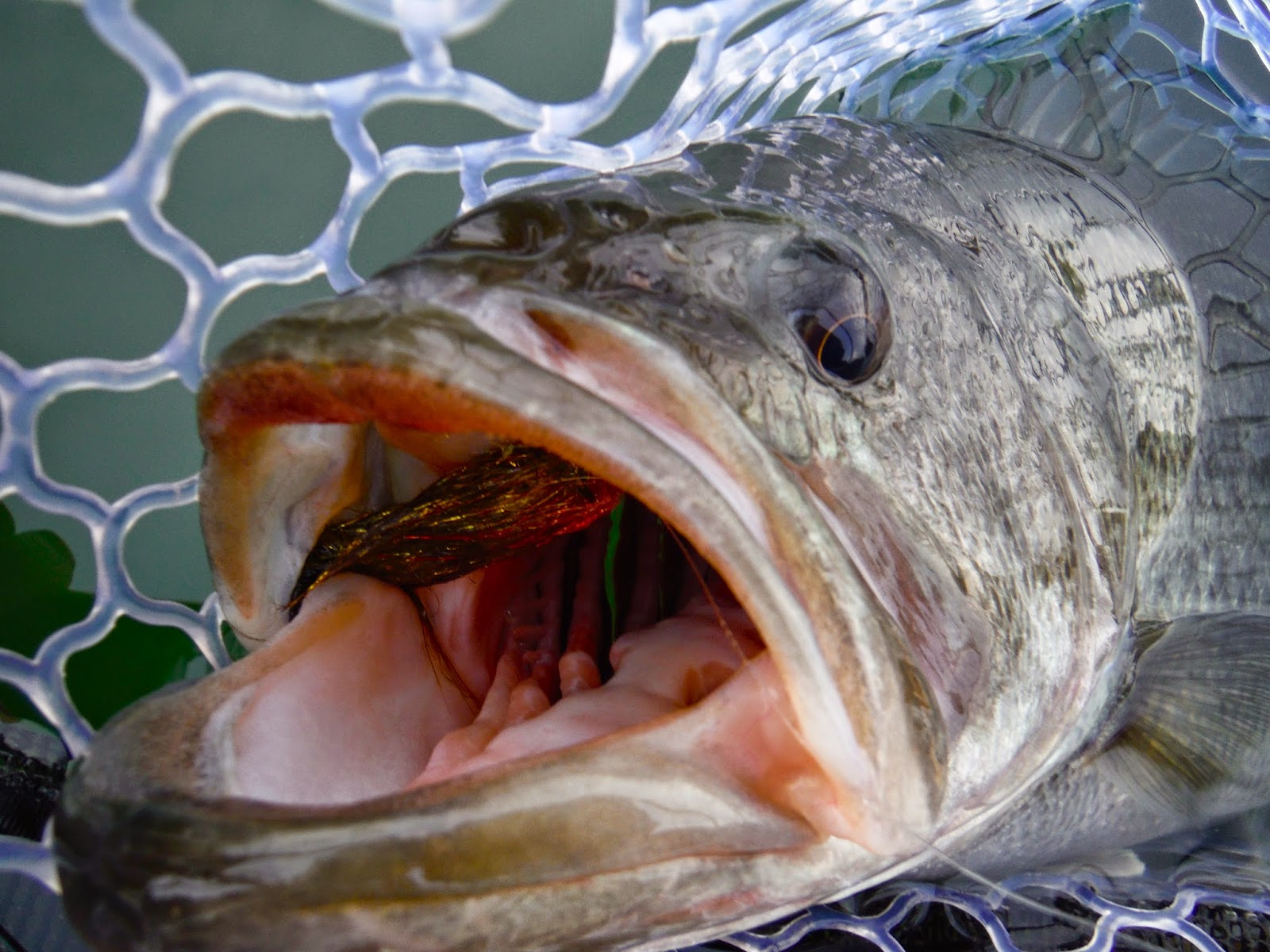 I had one more good look at the fish, before I dropped my net into the water and watched as it swam slowly out of sight.  A few more fish were caught with the same technique before I figured I should push on.  I looked around, trying to find a spot to head to. The problem was, there was so much to fish and so little time. 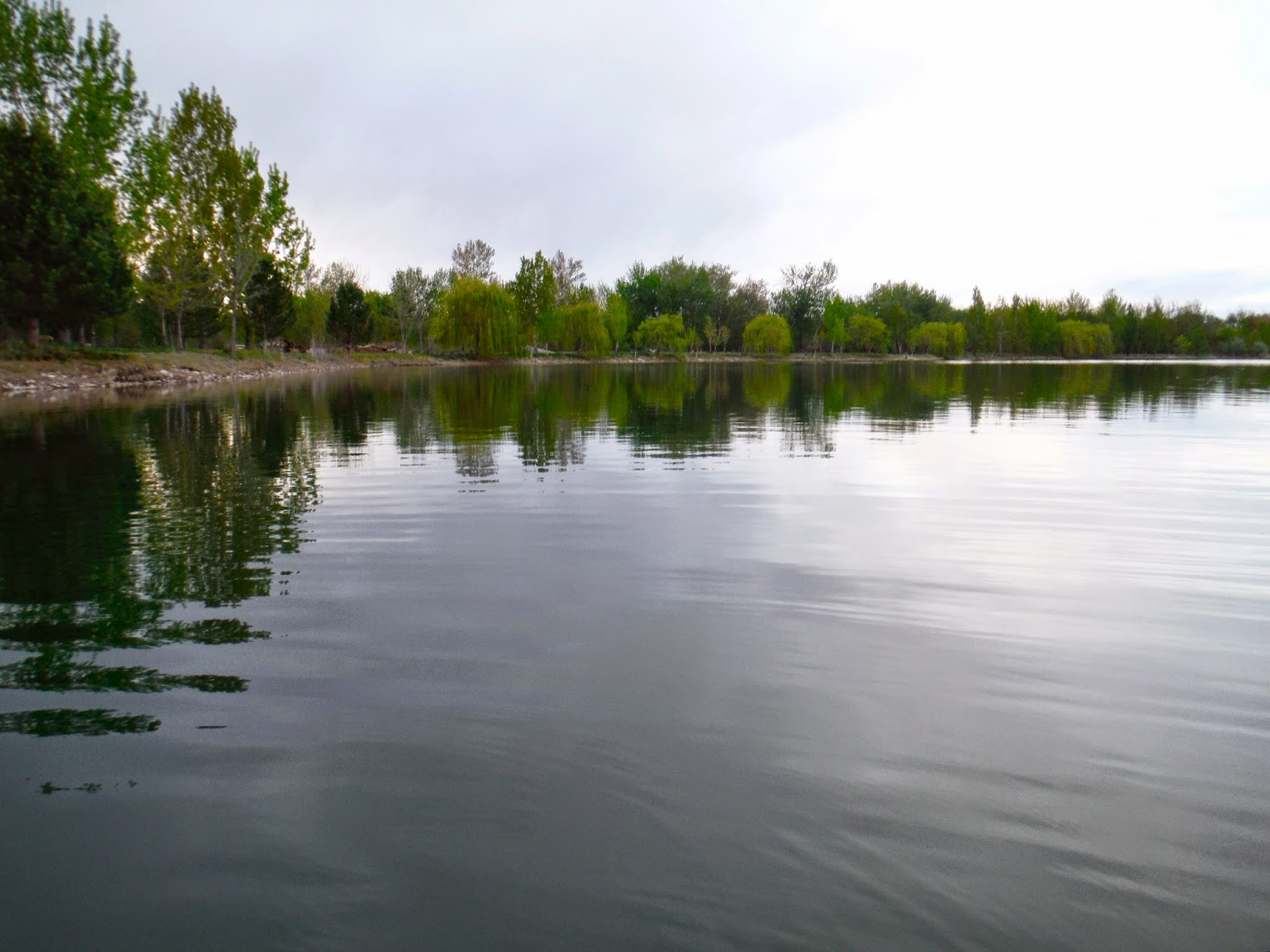 I made my way to the opposite end of the pond and, on the way, let my line troll along as I kicked.  A sudden jolt caused me to set the hook, and as the fish came into sight I saw the red stripe of a rainbow trout.  The fish was easily over twenty inches, and I was excited to get it to the net.  The fish was only inches from my net when it turned and spit my hook.  I forcefully whipped my fly rod in a circle so that my fly would hit the water with force!
“Damn!” I yelled, as my fly smacked the water.

Though I had lost my only rainbow of the day, the #3 sinking line was certainly the right way to go with the bass fishing. 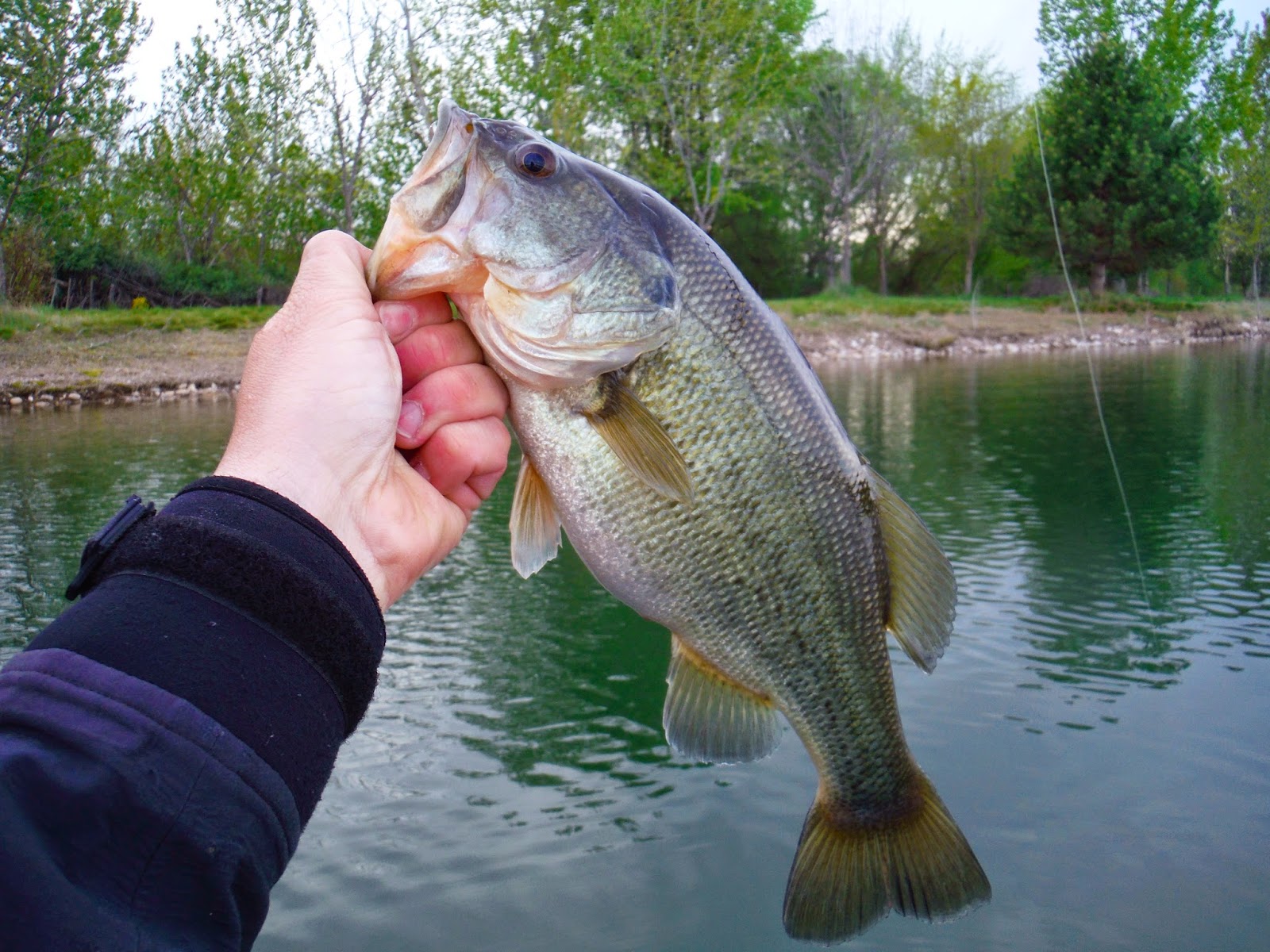 Bass after bass made for a fun evening!  The sixteen-inch bass I was bringing in were babies compared to the big ones. I was indeed spoiled to be fishing here.

The day was ending far too fast, and I could only see one other angler near the take out.  Stubborn, I remained as far away as I could from the take out, and the bass fishing was only getting better! 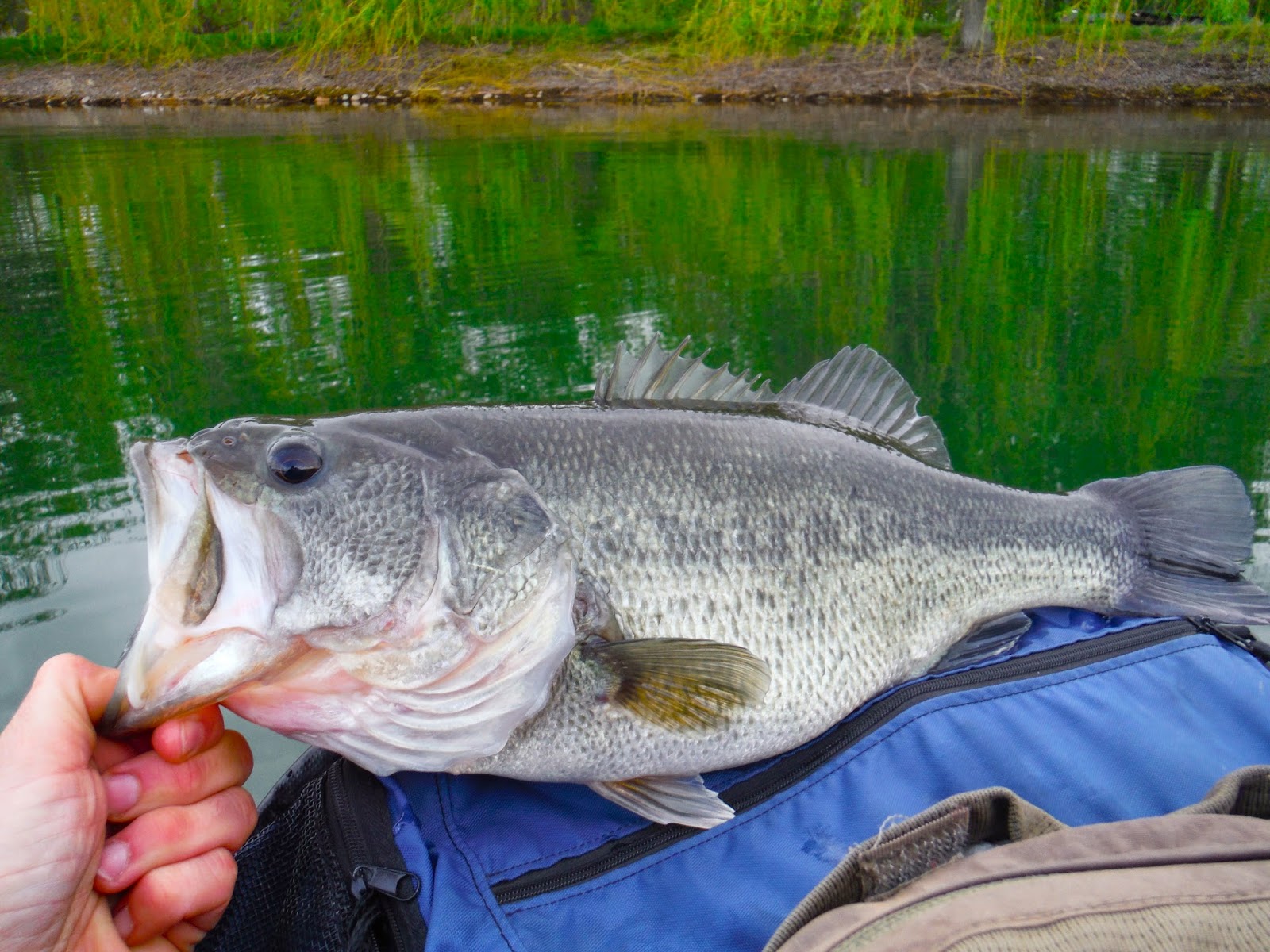 I knew I wouldn’t get off the water until someone kicked me off.  I didn’t see any other anglers on the water anymore, and I wondered if I should start heading back, but then another fish hit my line like a ton of bricks, reconfirming my decision to stay out a little longer. 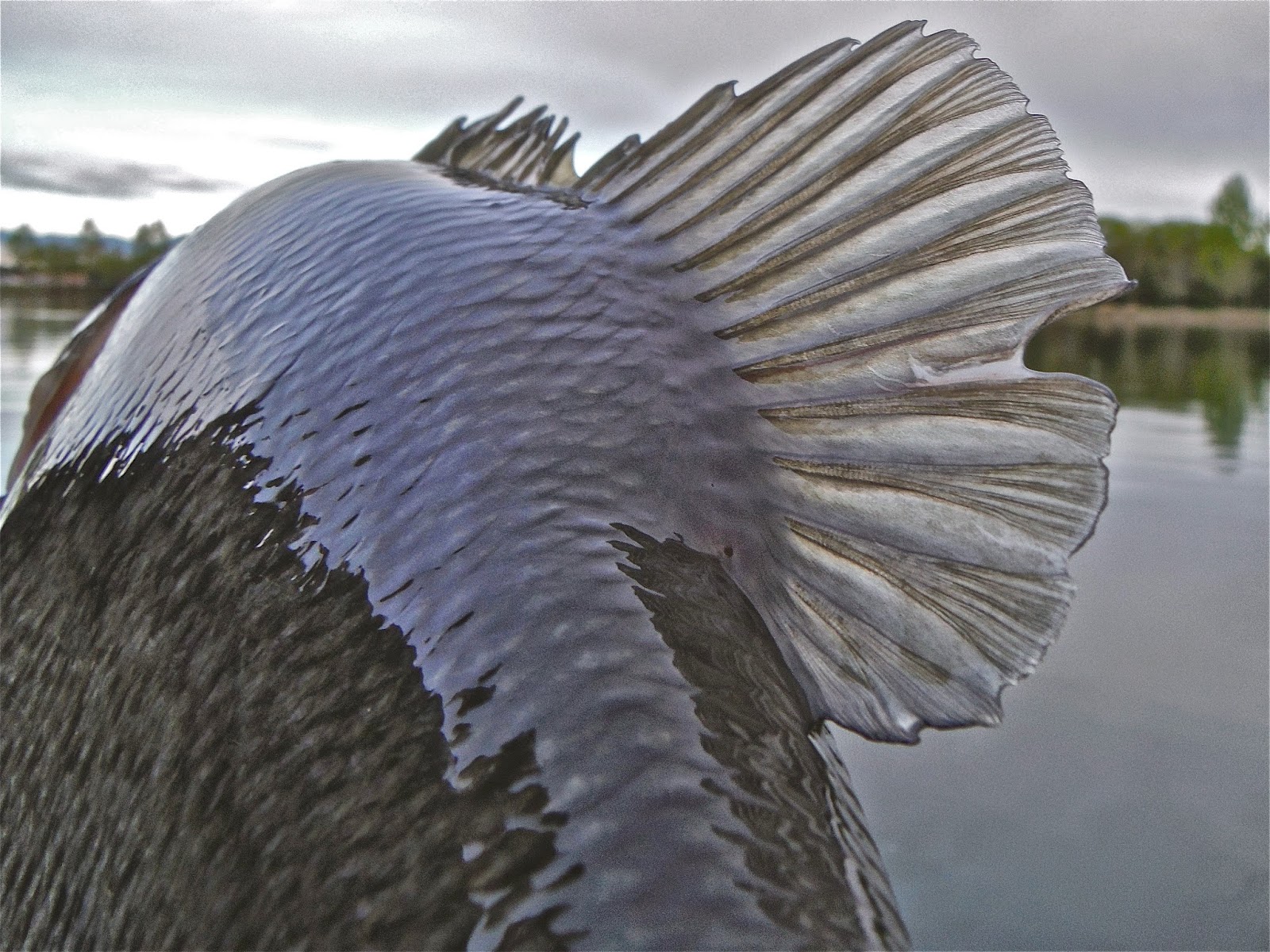 I continued fishing and was completely unaware that Jerry Troy had driven John over to my side of the pond to pick me up.
“It’s time to go.” John said politely, knowing that was not what I wanted to hear.
“First one on the water, last one off.” He said to me, as my casting became faster and faster while I kicked into shore.
“How did you guys do?” I asked, as John pulled my float tube out of the water.  John just smiled, and with a half dazed look said, “Really, really good.”
“Any rainbows?” I asked.
Jerry pulled out his phone and showed me a picture of a 23 inch rainbow that dwarfed his net, making it look like it was made for a fish tank.
“That’s a nice fish, Jerry!” I said, as we drove back to gear down.
I ran into Wess and he also had a fantastic evening.
“It seemed like the further away we got from the bank, the bigger the fish got.” He said with a smile.
“Can you imagine what this is going to fish like in a few weeks, after it gets a little warmer?” I said to John, who was all packed up.
“You mean during the event?” John asked rhetorically, shutting his tailgate. “It’s going to be goooood, Erik.  God bless it, it’s going to be good!”