Skip to content
Soft pillows of thick snow floated down at the South Fork of the Boise river on the last day open.  Most would be sick of the snow this late in the season; but as an angler, the opportunity to fly fish in the snow offers a serenity that you can only understand if you are there to experience it. 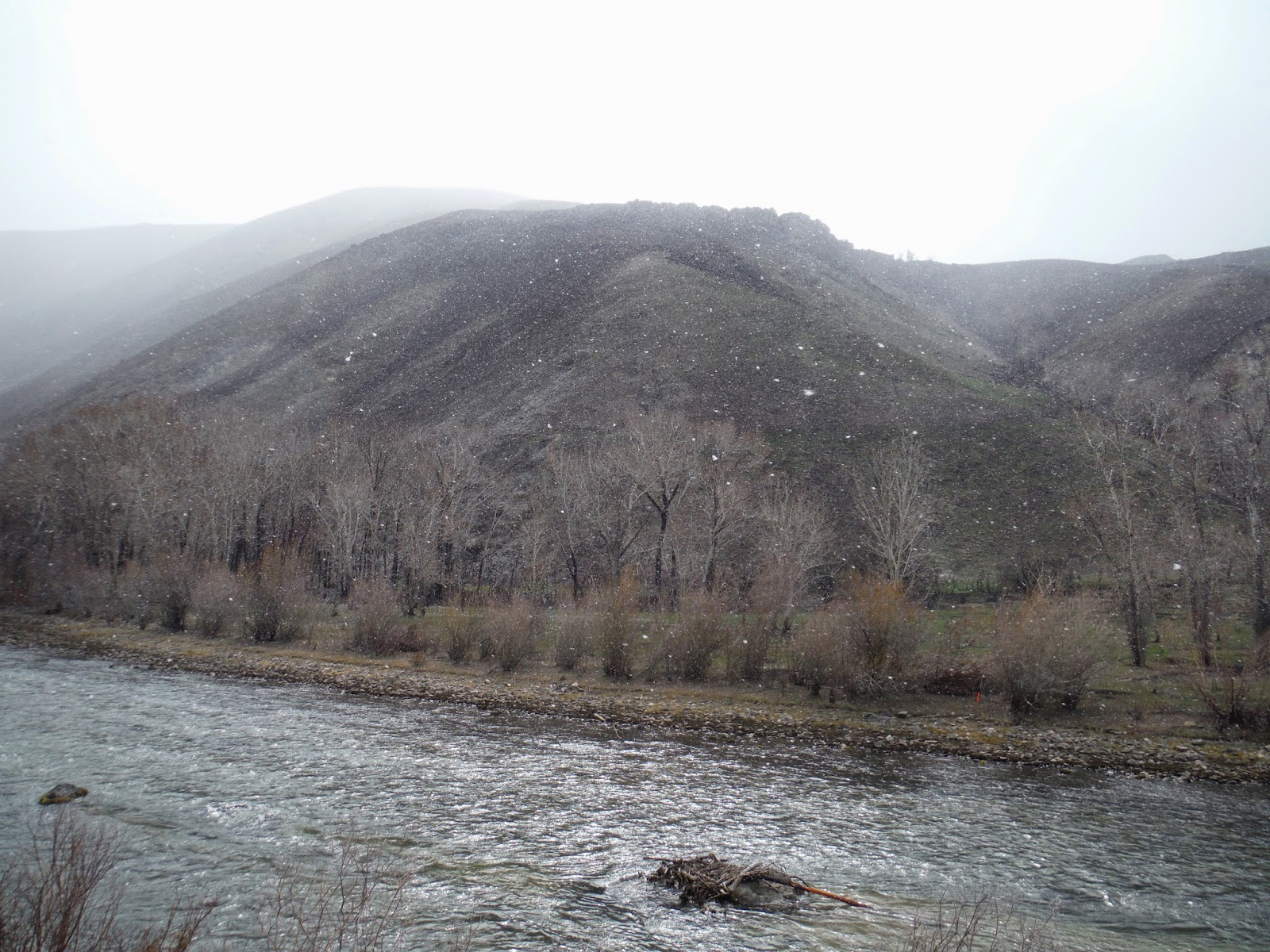 Steve Kip, a good friend and fellow fly fisherman, was already on his way to the South Fork before I had notified him I was interested in joining.  Needless to say, despite being half way to Mountain Home, he turned around to pick me up.
While Steve rigged up to do some traditional nymphing, I set up the Shadow 2, Euro style.  Though effective, Euro nymphing comes with its draw-backs, as not everything that hooks up is a fish.  Rocks, sticks, and this bundle of flies, shrubbery, and caddis casings are all things you can dredge up on a hook set. 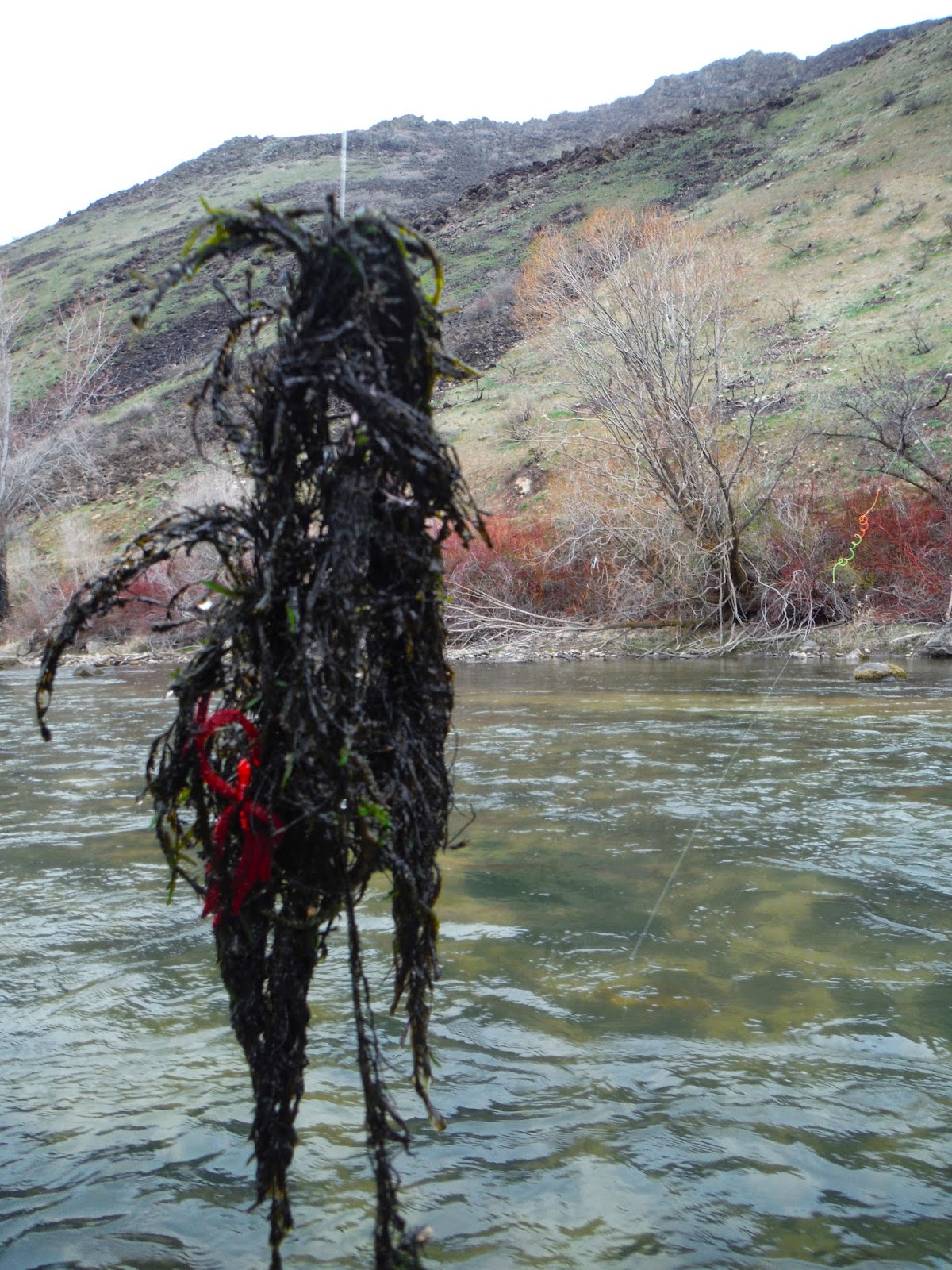 Whatever the risk of catching a few sticks are, it’s nothing compared to the success this style of nymphing offers; I had already lost count of the number of fish I had brought to the net in a very short amount of time.  Steve had hooked into some white fish, and his next fish was also fighting like a white fish.
“Not another white fish!” Steve said bitterly. 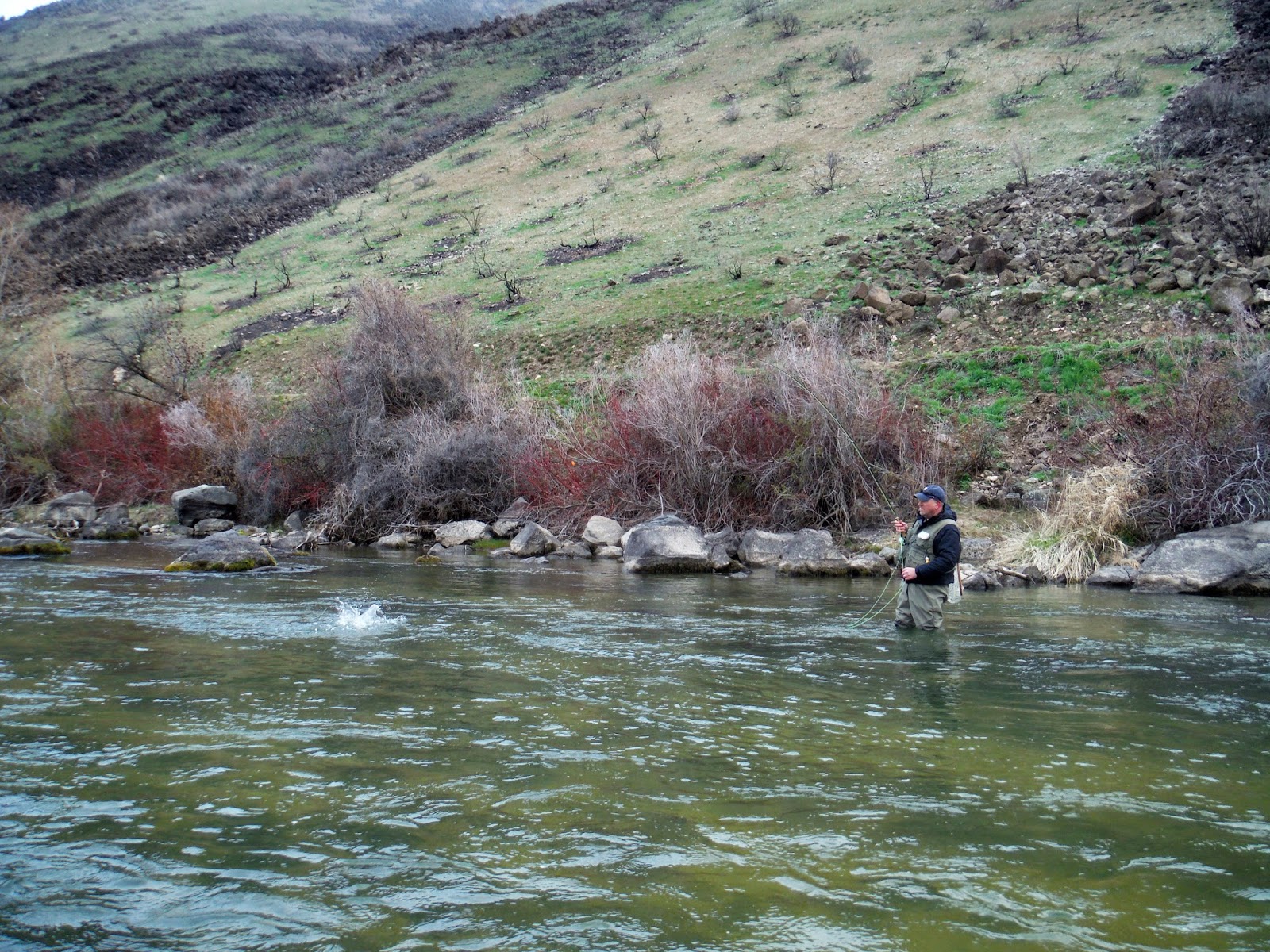 “Get off!” Steve said to his fish, adding slack to his line, but the fish was going nowhere.
“I guess I’ll have to bring it in…” He said, rather unhappily. But as Steve lifted his rod, bring the fish’s head out of the water, I noticed the color of the fish.
“Steve, that looked like a bull trout!” 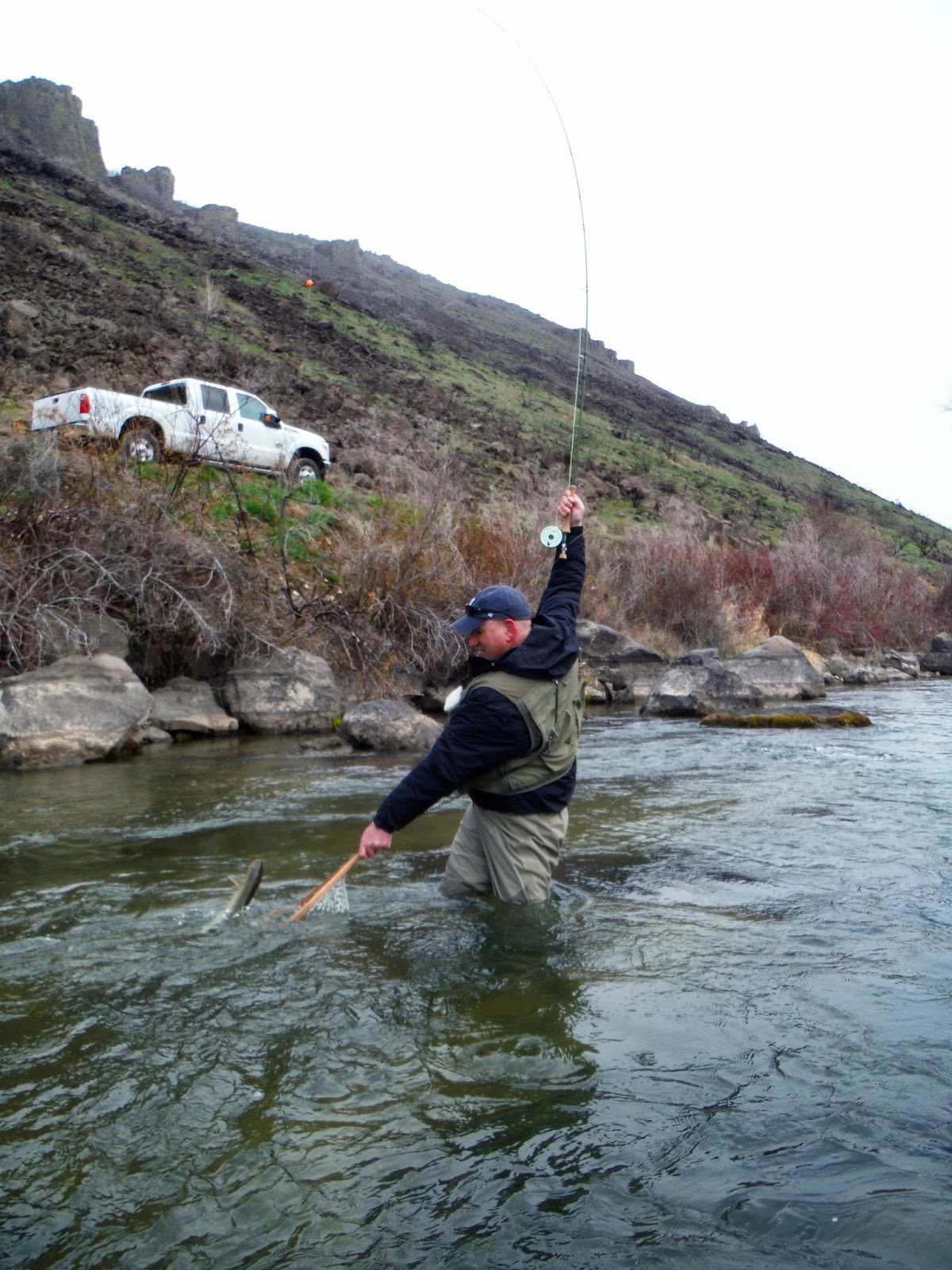 “It IS a bull trout!” Steve said happily, “I have never caught one of these before!”
Steve did a good job keeping it in the water.  While the fish was in his net, I pointed out the white stripes that mark the face of the fins and the orange spots on the flanks, indicating a bull trout.  Steve took it out for a quick picture before releasing it back into the water.  The bull trout darted away aggressively, and Steve looked up at me with a big smile, saying, “That was cool!” 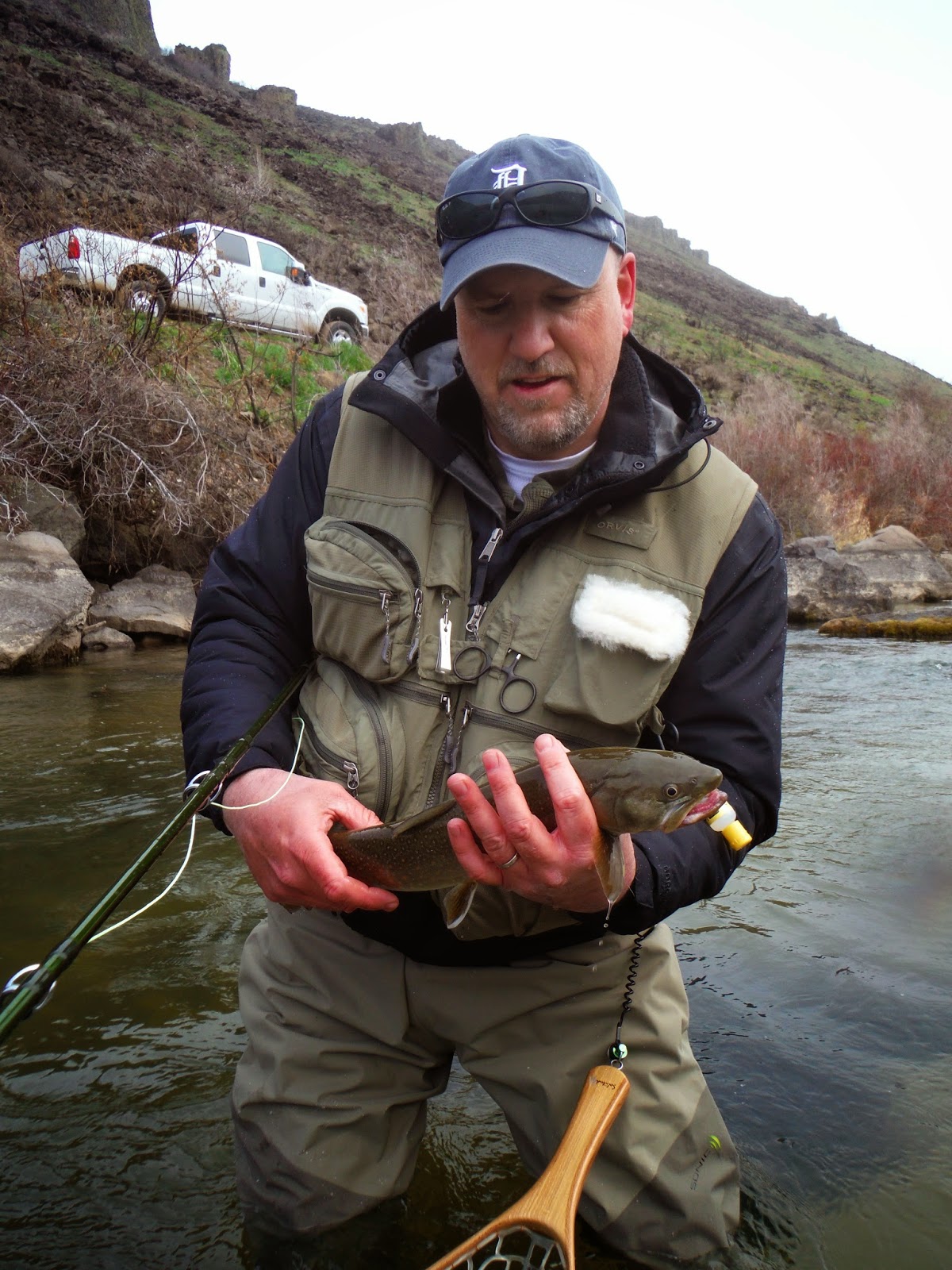 Steve remained upstream while I walked downstream, but before we separated, Steve was sure to point out the rarities of catching a bull trout, saying, “I bet you wish you could get a bull trout.”
White fish after white fish was being caught with no bull trout in sight.  Though my rig was performing well, I wasn’t getting the accuracy I wanted. Rumor has it that while nymphing, accuracy is not terribly important.  Perhaps it comes with years of dry fly fishing, but I wanted my nymphs to hit a very specific spot on the run.  Switching up my leader a little bit did the trick, and it paid off because the next fish I caught leaped out of the water, indicating a rainbow trout. 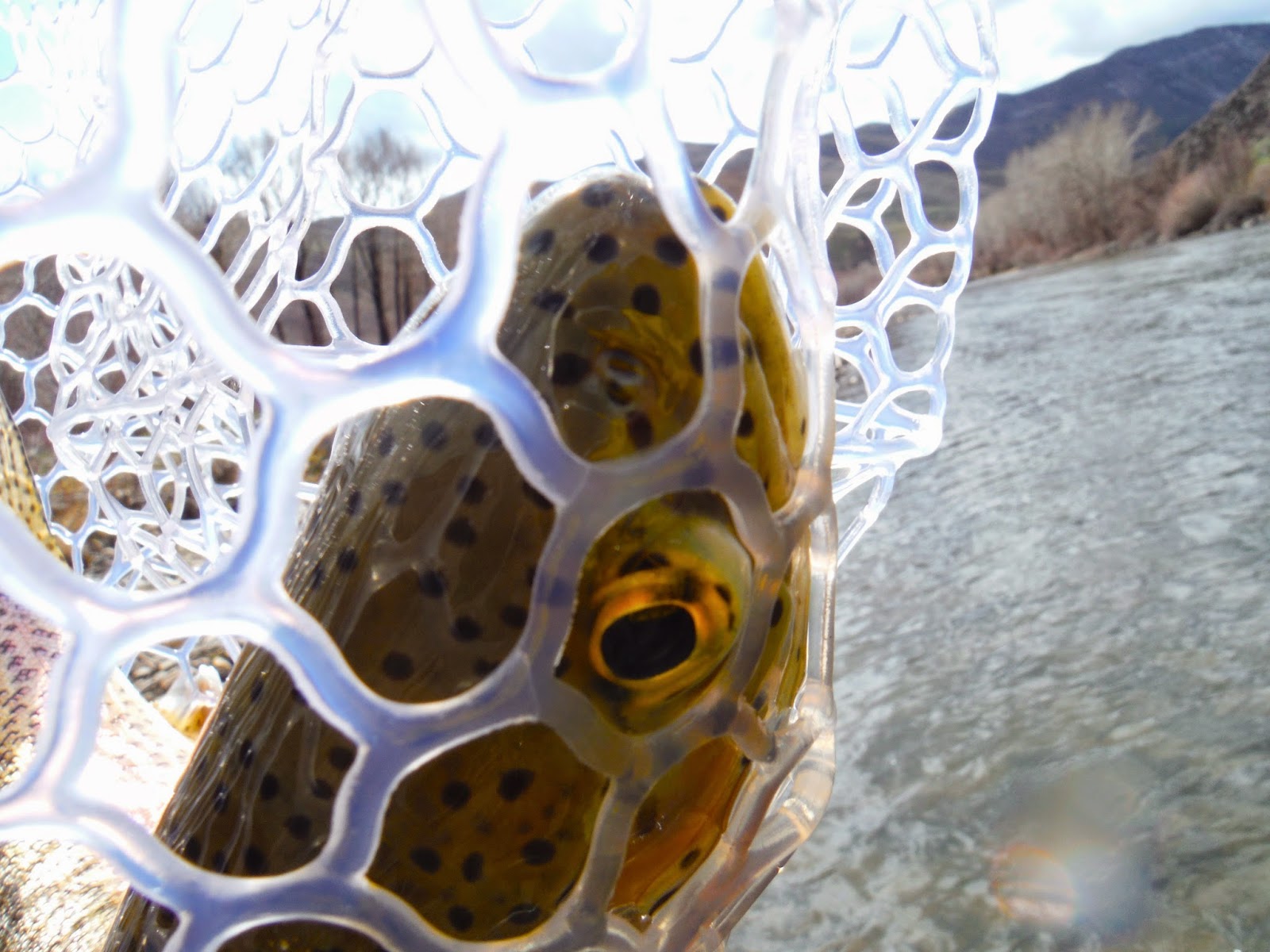 When a white fish fights, it tends to stay low in the water and it is extremely rare for one to jump. Perhaps its equilibrium is better than a rainbow trout, but a fish jumping is a sure indication you have a rainbow trout on this river.

Once more I was picking off white fish when I heard a strange trumpet noise coming from the woods.  Turkey, was the only thing I thought it could be, and curious to see one, I set my rod down and bolted into the woods.  The squawking was so loud as I walked further away from the water, and at a crouch, I saw something that wasn’t a turkey.  The tan body stepped lightly through the shrubs in the distance and disappeared before I could get a better look.  Later, after I played a recording of the trumpet noise to a friend, I discovered that what I saw and heard was a sandhill crane. 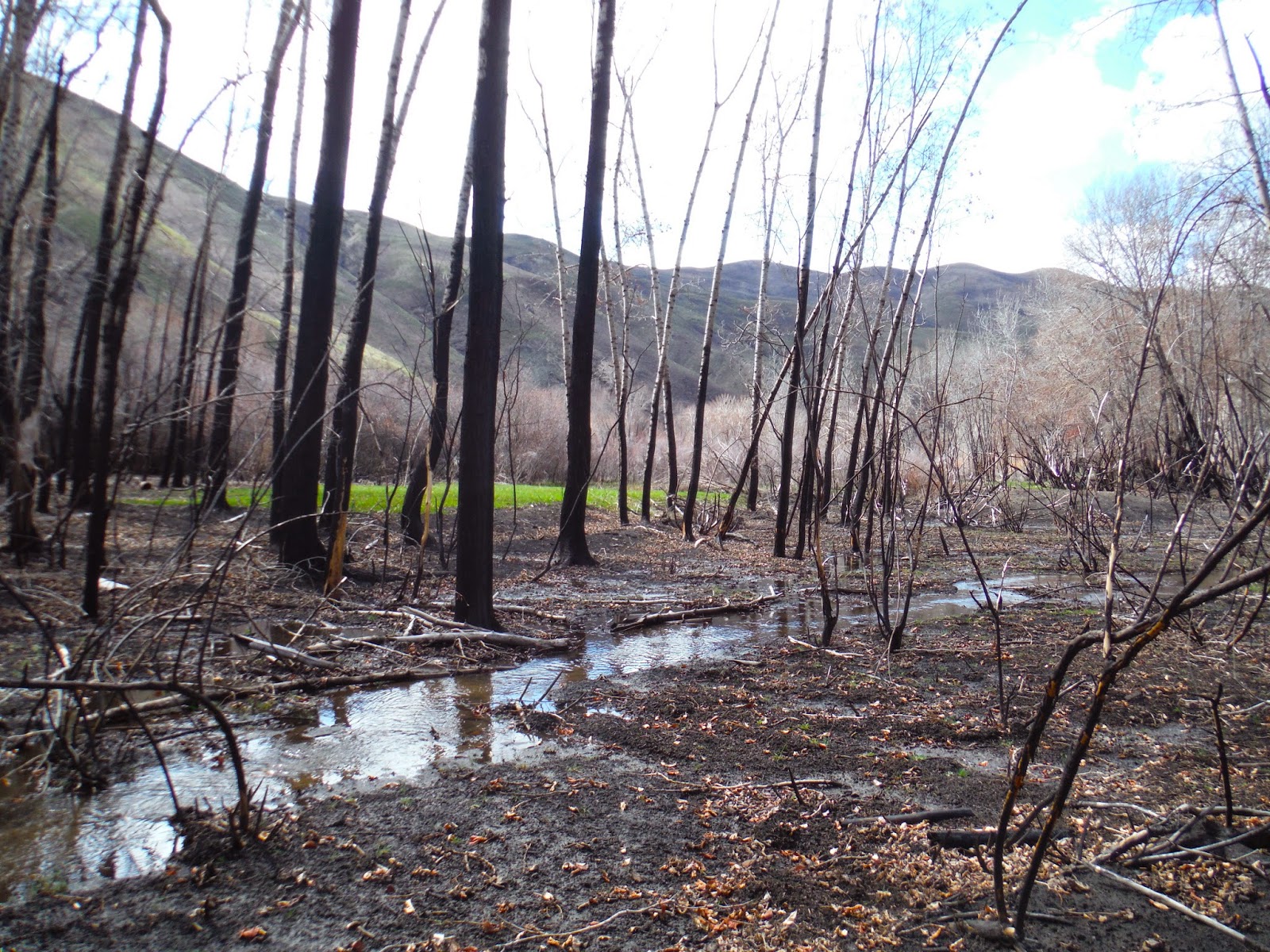 The crane’s call was echoing throughout the river as we continued to fish.  It was white fish central, as I hooked one after another.  I was getting much better at determining my strikes with my slinky, and set the hook on another fish!  The fish bolted, ripping line out of my reel.  It’s putting up a great fight, I thought as I regained control, bringing in this little white fish.  I had already caught white fish that would easily double the size of this guy, but the fight this white fish put up was picture worthy. 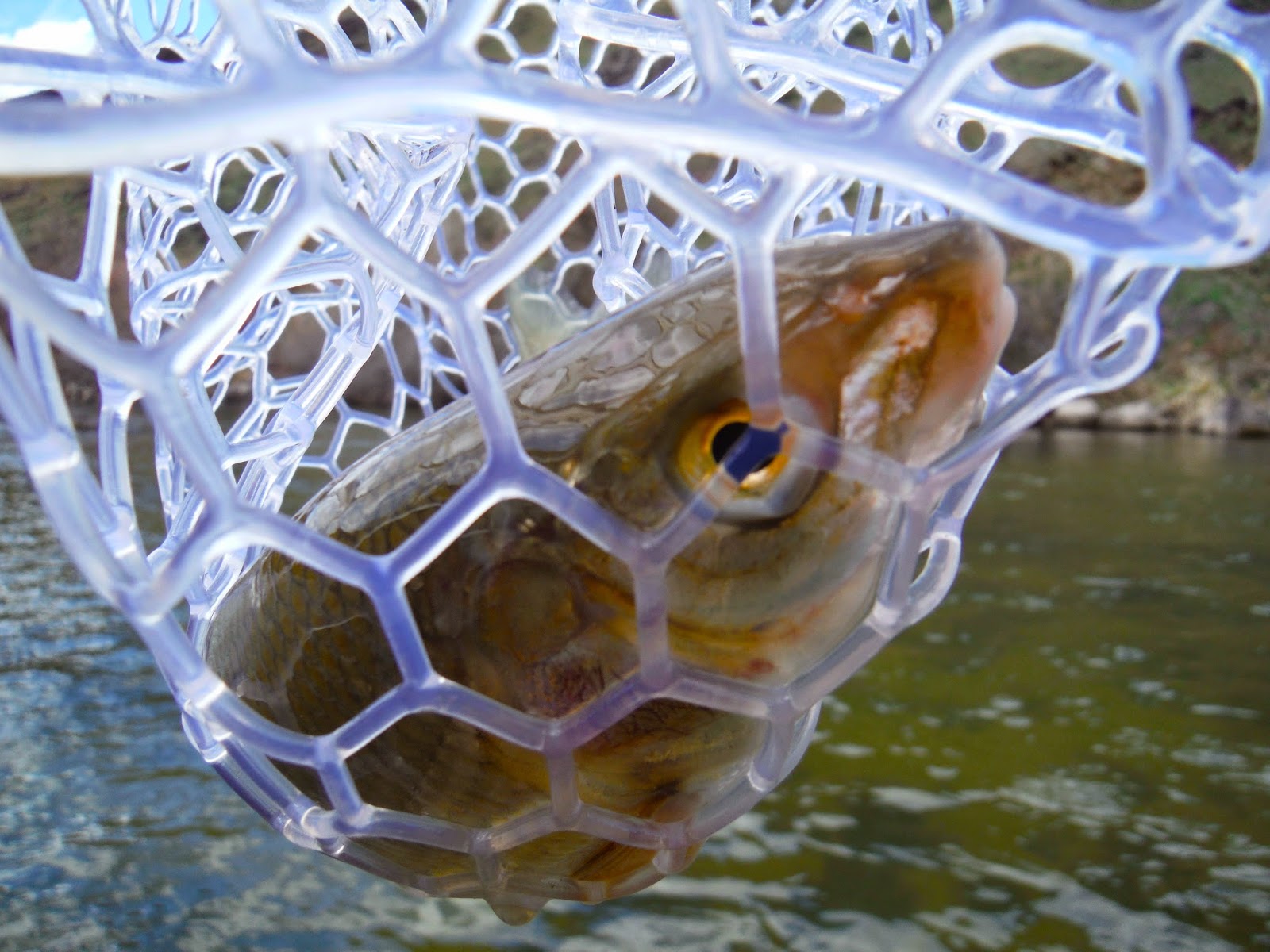 The little white fish darted off, and Steve was hooked into a fish upstream. By his lack of enthusiasm, I knew he had caught another white fish.  My attention had quickly gone back to my fishing, especially after I had hooked into something big.  The fish took off downstream, and in order to stop line from screaming out my reel, I had to follow it.  Waste deep, I let the current help me as I took big strides downstream.  The weight of this fish had my Shadow 2 doubled over, and with a few more steps the fish had eased up.  A quick flash revealed that the fish I had hooked was a sucker fish! 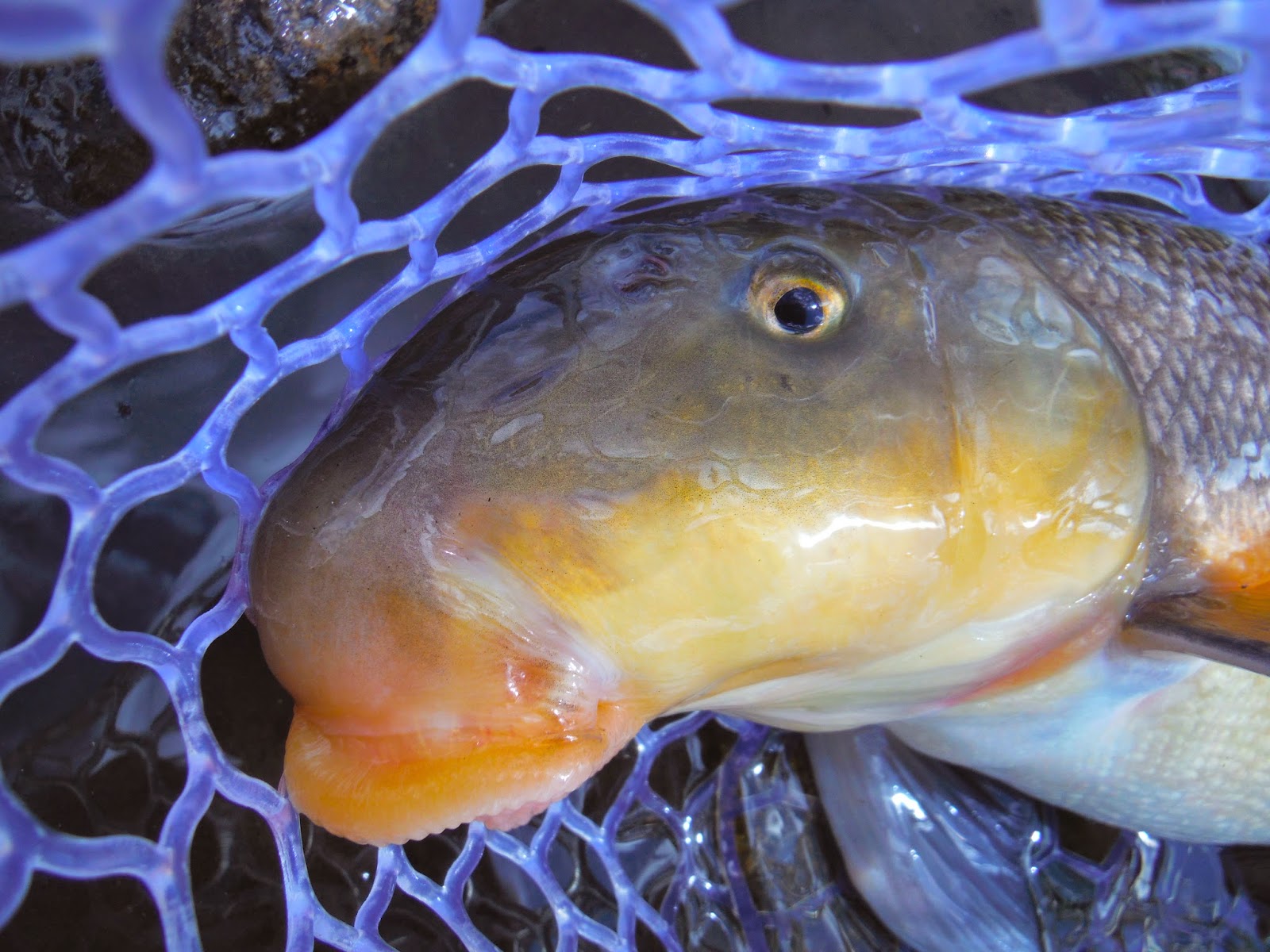 Getting it into the net was a challenge on its own: the fish was not wanting anything to do with me and would pull away every time I had it an inch from the net.  And when I did get it in my net, the fish had a look, as if it didn’t have a clue what was going on. 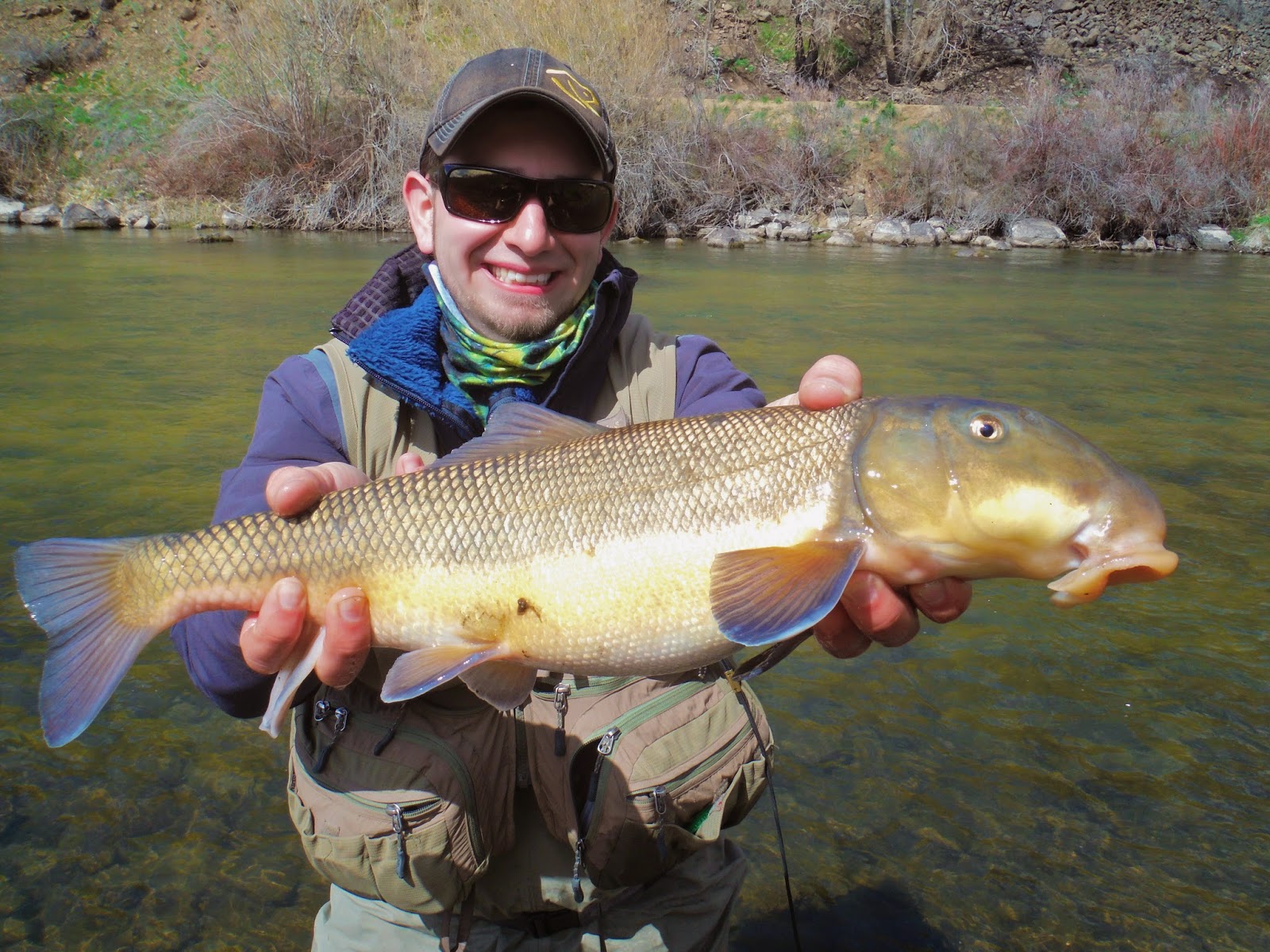 “I didn’t even know these fish were here.” Steve said, joining me on the river’s edge.
“They are definitely here.” I told Steve, “I just have never caught them because I normally don’t nymph the South Fork.” 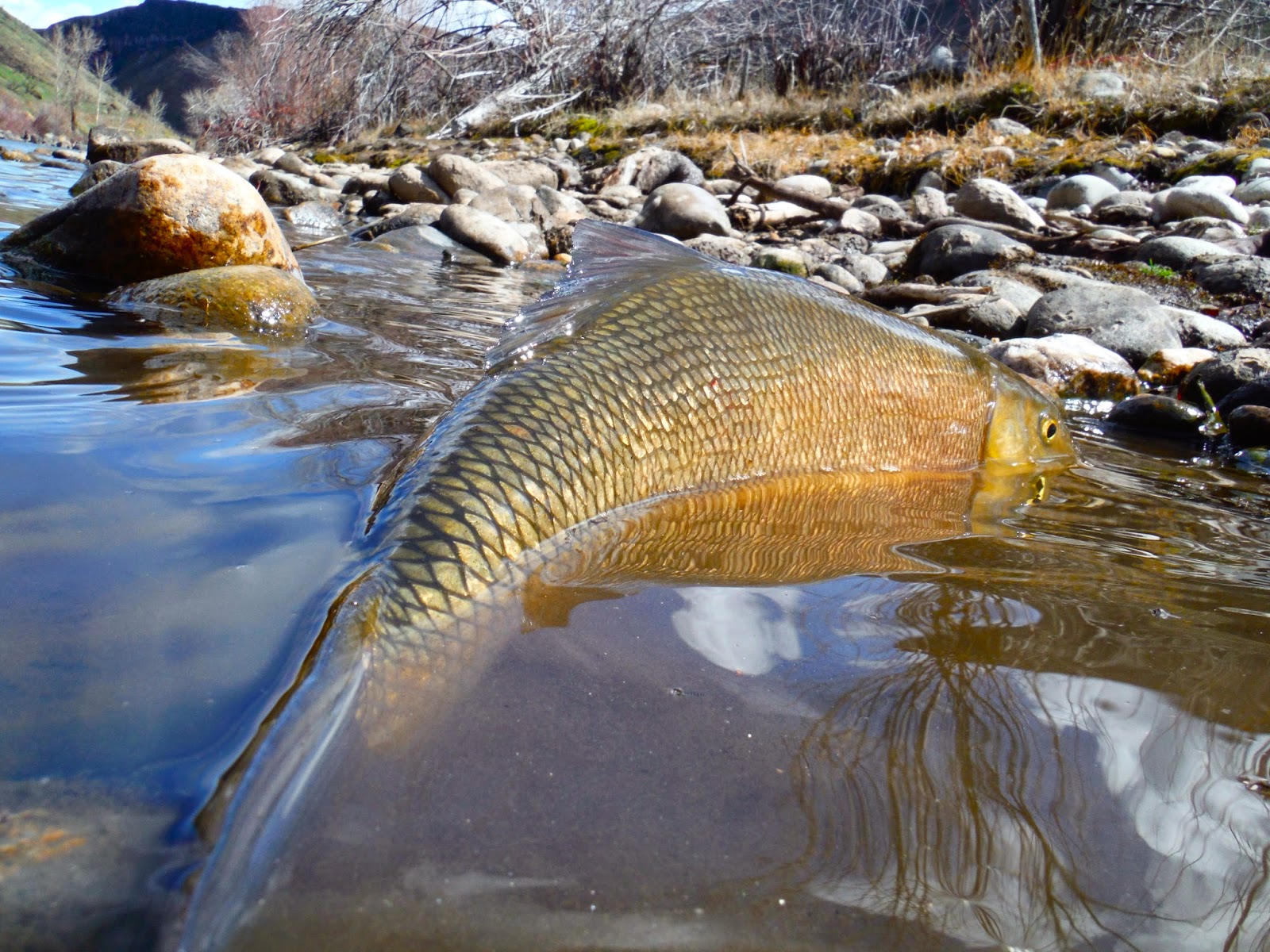 The dark figure of the sucker fish swam off lazily.  Both Steve and I looked out onto the water, watching a small baetis hatch take place.
“Any rainbows?” I asked Steve, who was dying to catch one; and I knew full well he hadn’t caught one yet.
“Nope…” He said, “Any bull trout?” He asked me, very snobby-like.  I looked over at him, and smiled…
“Well played, Steve… Well played.” 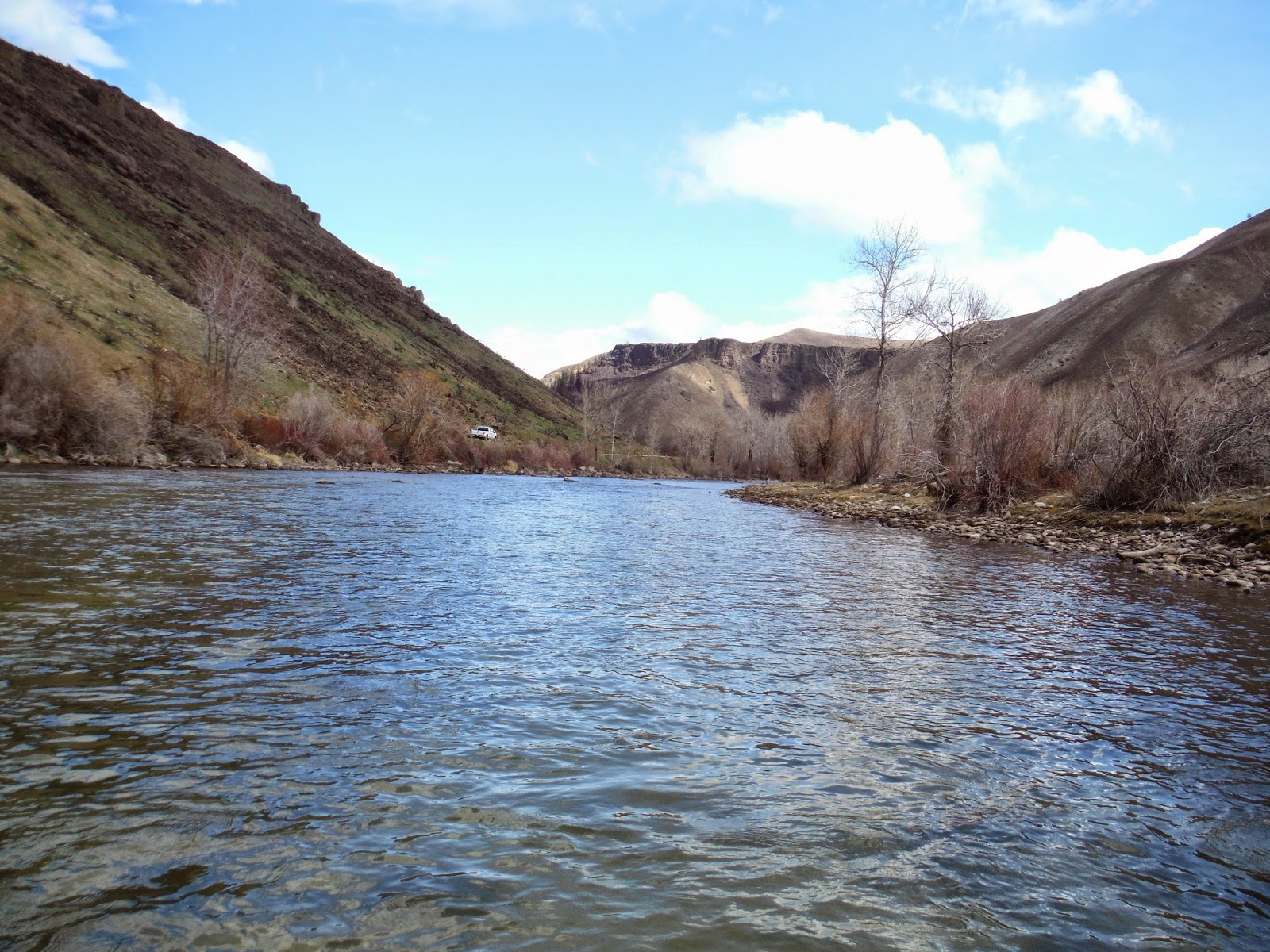 The baetis had started hatching, and a few fish starting rising to them.  I took off my nymphing leader, and switched my Shadow 2 into a dry fly rod.  I got into position to cast out my RS2 BWO fly to a non-suspecting fish.  The fly floated gingerly over the feeding fish, and it came up and ate my fly.  The fish thrashed as I brought it in, and Steve was there to snap a picture. 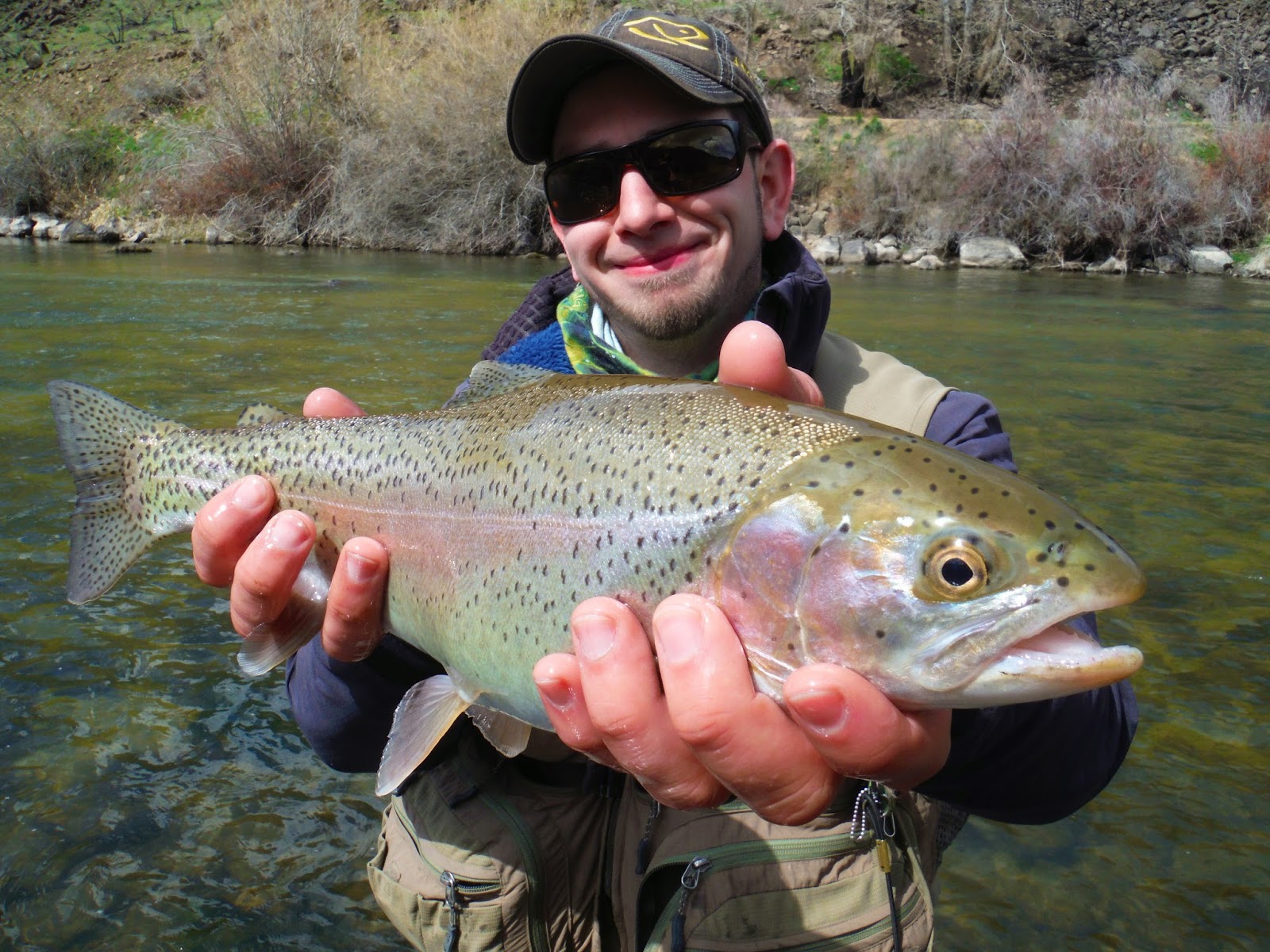 Another rising fish was only a few feet away from the previous one.  I dusted my fly, to get it floating again, and presented it to the new fish.  The water was moving slowly carrying my fly towards the fish.  The fish appeared, right under my fly, taking a careful look before opening its mouth to take in my fly.  I set the hook, and the fish was airborne.  Splash, splash, splash!  This fish was pissed, but despite its jumping abilities, it came in easy. 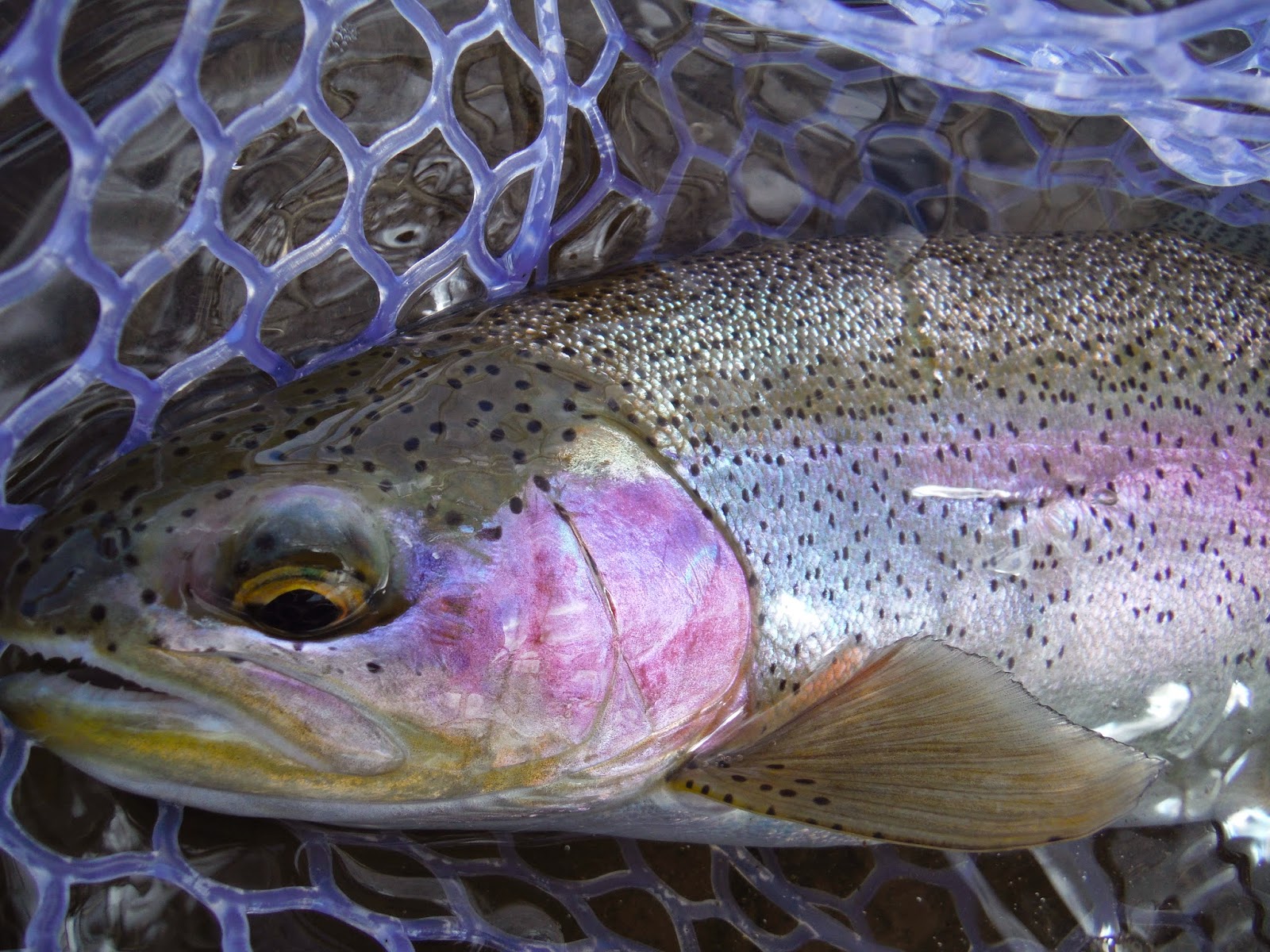 “I want to get a rainbow.” Steve said, as I let the fish go.
“Go for a rising one, then you know it will be a bow.” I suggested, and handed the rod to Steve.  We could see fish rising all over the place, so it was now a matter of choosing a fish to catch.  I suggested to Steve that we get closer to the fish we were going for; that way there was no need to make some fancy, long distance cast when just a simple one would do.  Steve’s fly was a little out of the feeding lane, but the fish came up for it anyway and Steve set the hook! SNAP!

“Whoa, Steve. You are only fishing with 6X tippet.” I said, before I tied on a new fly for him.  More fish were rising, as Steve regained his confidence, and presented his fly to another fish.  The fish willing took his fly, and Steve set the hook!  Splash, splash, gone…
“What am I doing wrong?” Steve asked, frustrated.  I explained that it would just be a matter of time and experience that would eventually work itself out.  By now most of the fish had stopped rising and we headed back to the truck.  Just as we approached where we would walk out, a fish rose.
“I want to watch you catch it.” Steve said.  I presented my fly, and the fish came up to take it.  I set the hook, and brought in this nice rainbow. 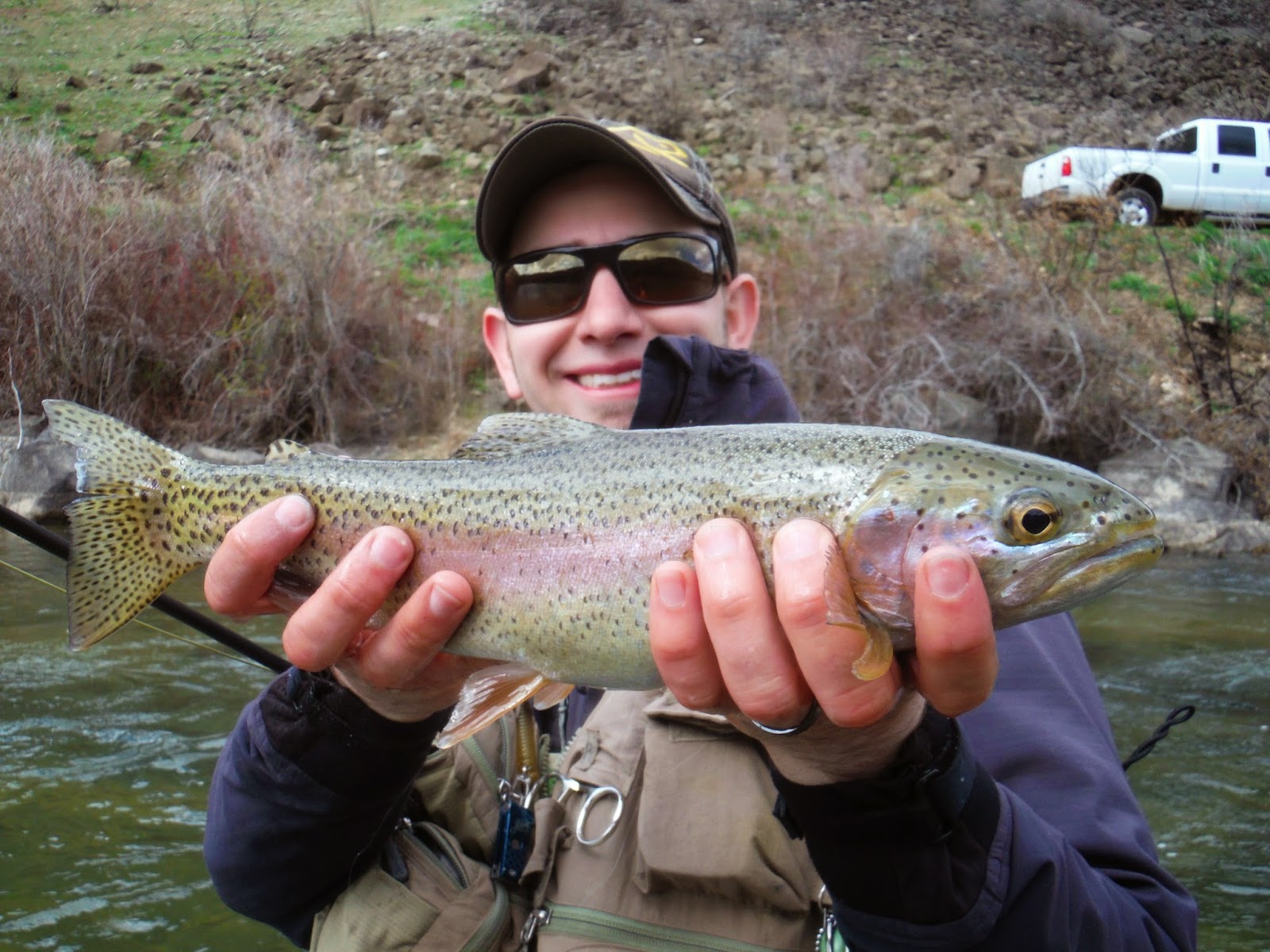 “See how easy it is?” I said to Steve with a smile, as I released my fish and looked up just in time to see a second fish rising right behind the spot where I had caught my fish.
“That’s your fish!” I said to him, handing over my rod. Steve wanted a rainbow so bad he could taste it.  So to ease his anxiety, I said, “You better get this one, because you know I can…”
“Yeah, thanks…” Steve said as he focused on his cast, and laid out his fly.  With the smallest dimple of a rise, Steve’s fish took his fly, and he set the hook!  The fish felt the pressure of Steve’s line, and immediately started thrashing.  In that split second we both recognized the size of this fish was easily double the size of the fish I had just caught, and in that split second, the fish threw Steve’s hook and it was gone.
Steve stood there in shock, saying, “Did you see that fish?”
“That was a big fish!” I confirmed.  There were no more rising fish, so we headed up to the truck.  After the excitement, we geared down and settled in for the ride home. I looked over at Steve and said, “Hey, Steve.  Do you remember that time when you lost that big fish?” Steve didn’t miss s beat, “Was that the same time when I caught that bull trout?  Something you have yet to do at the South Fork?”  He glanced over at me, smiling.
“Well, until next time!” I said.
“Yes Sir!” Steve replied, and we drove home.