Skip to content
Oh no! I thought, after waking up to torrential rain beating the ground the morning of the casting competition.  I wasn’t so worried for myself, but for all of the volunteers that were at Eagle Island State Park setting up the casting course.  There was no sight of the rain letting up any time soon. And it was no surprise that Darren Strong, who was running the event, called to ask if I could swing by his house to pick up some dry clothes that his wife set out for him.  And wouldn’t you know it, the very minute I pulled into the park, the rain stopped.  I found Darren walking around in his waders, and he had little time to change before everyone gathered around to start the competition. 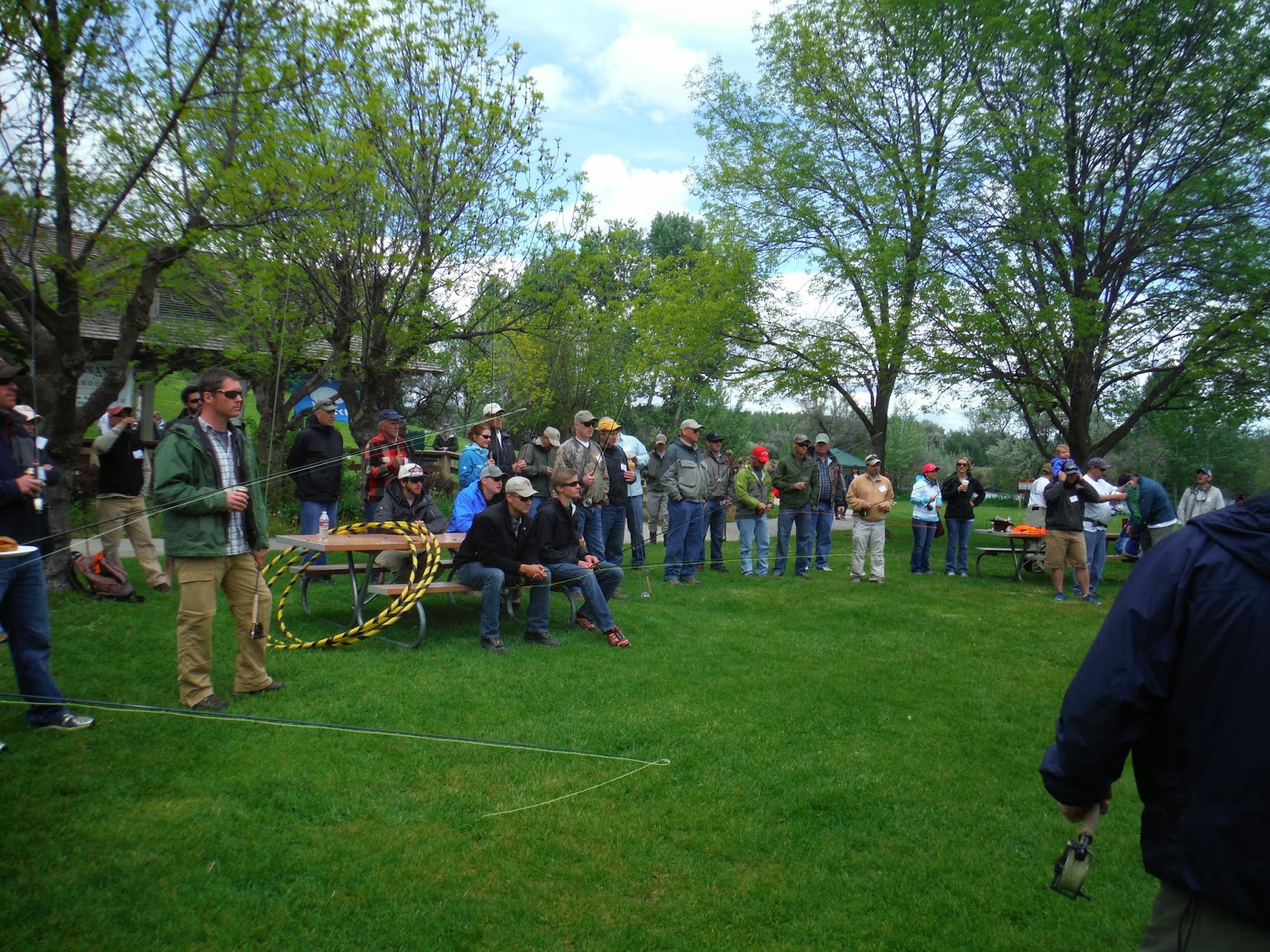 Anglers sponsored a gold team that included Pete Erickson, Todd Packer, and myself.  John, who created the team, was pleased to announce that our fourth person was none-other-than local celebrity, Travis Swartz/Hank Patterson. 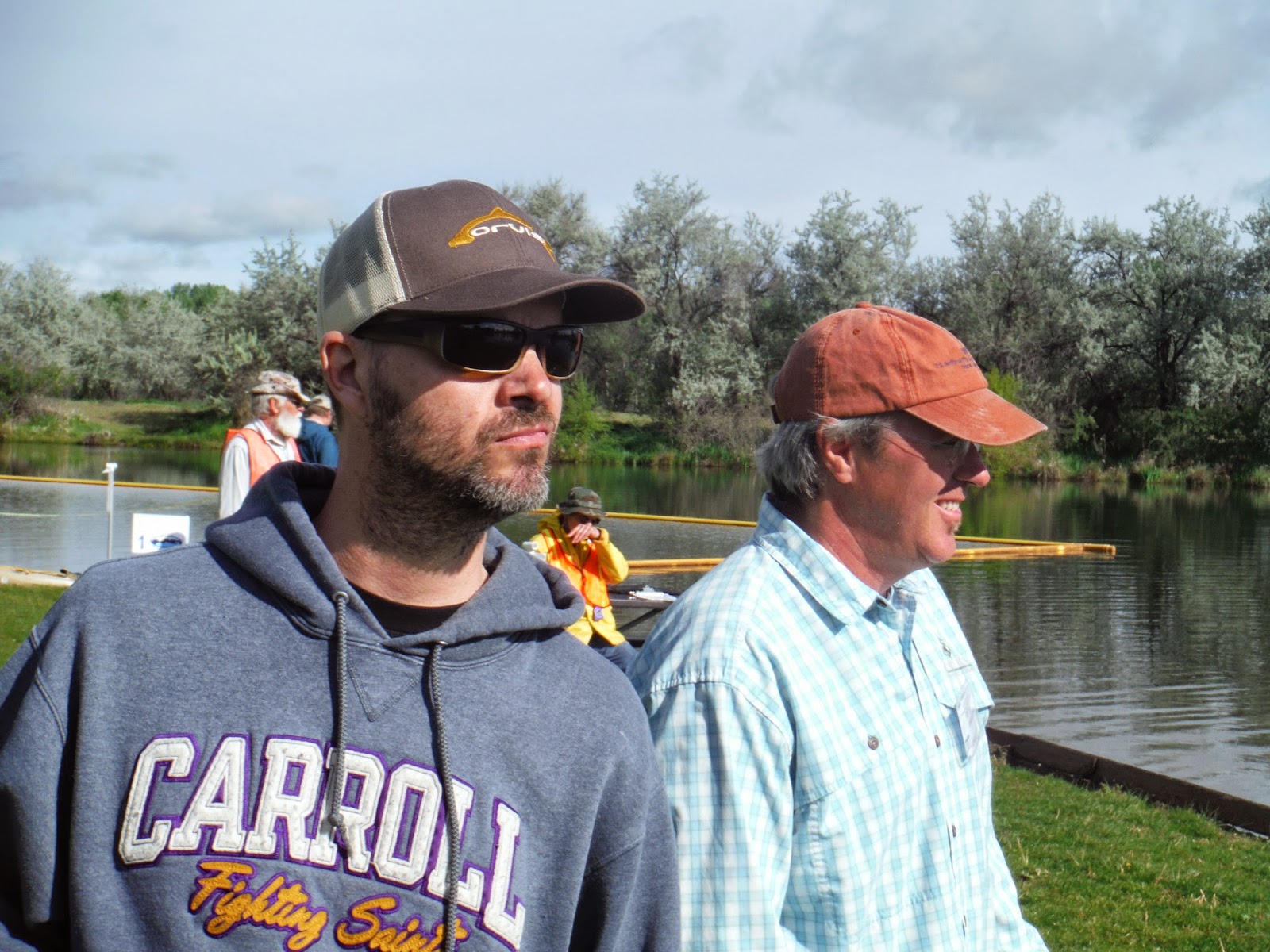 “Are you trying to make us lose?” I retorted to John, dropping my hands and snorting like a little kid who was told to go to bed early; but the team was complete, and together we made our way out to the first obstacles of the course.  Somehow, simply on the walk out, Travis had managed to get his fly line all tangled up in his fly rod, a sure indication that it was going to be a long day. 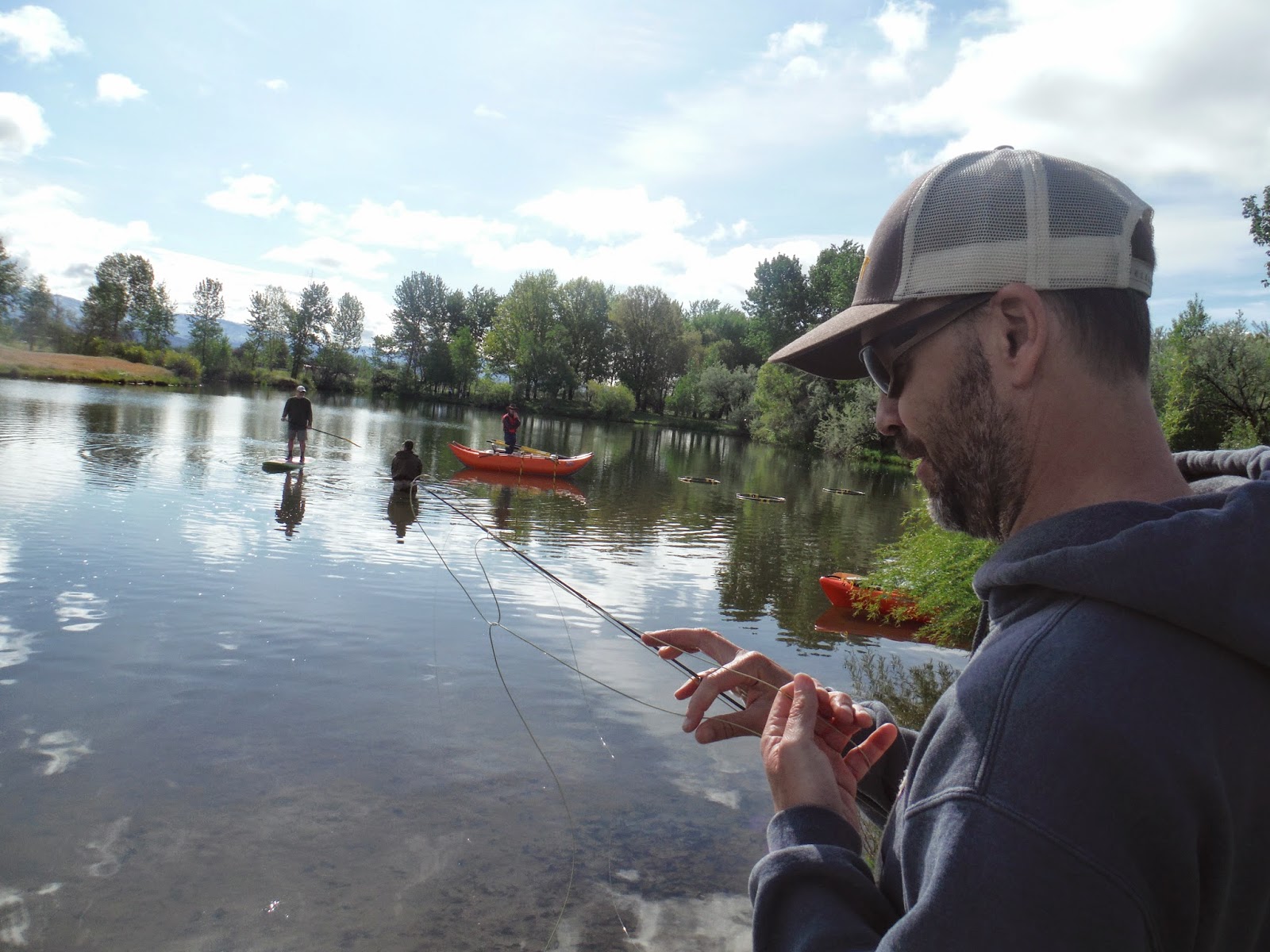 The water holes were a great place to start, with each offering their own challenges: roll casting, casting under an obstacle, off-hand casting, float tube casting, and the bone fish hole. 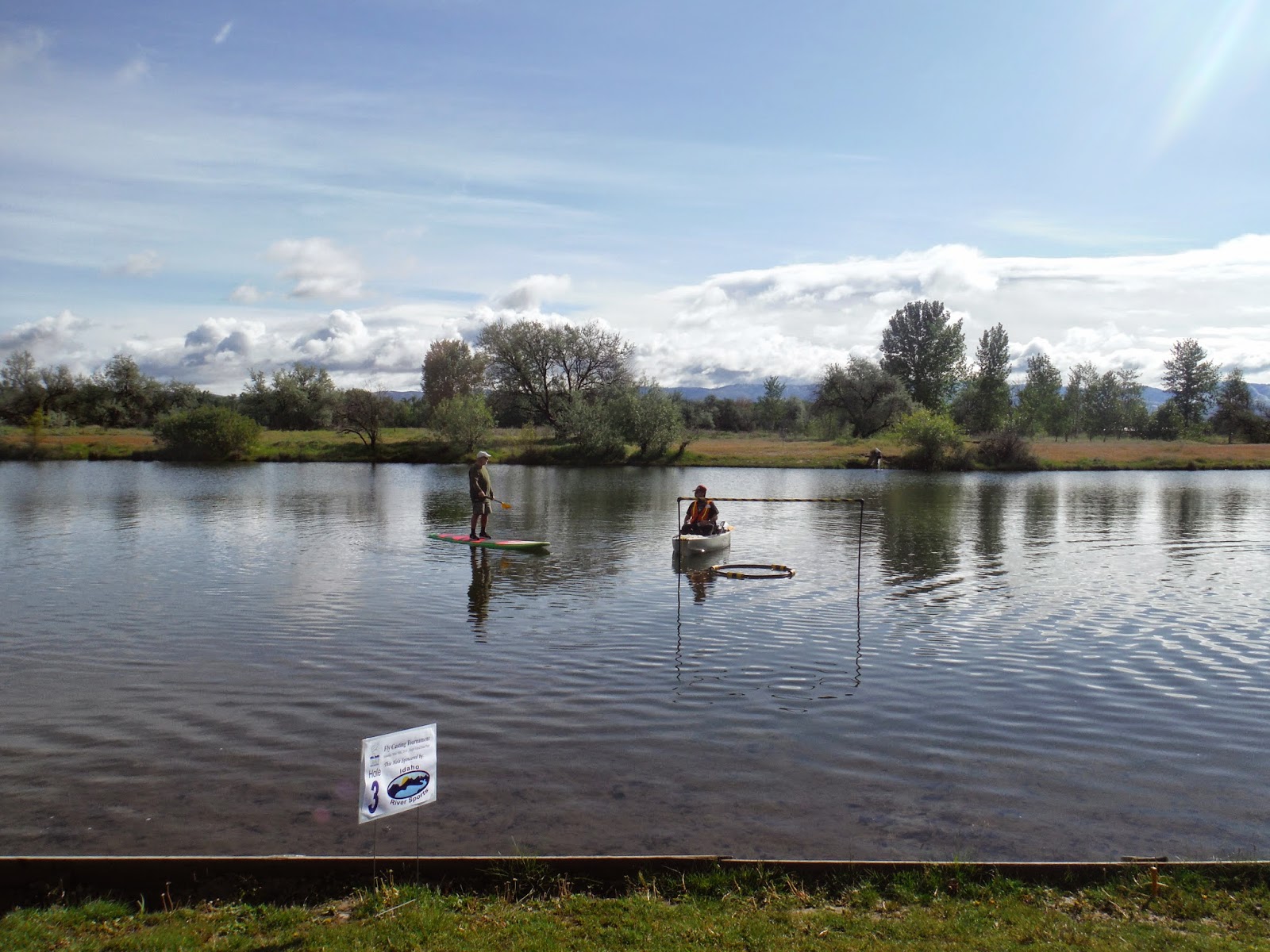 Most of them we accomplished with little complication.  That is, until we got to the bone fish hole: this hole consists of two four-foot rings, one set out at 55 feet, and the other set out at 70 feet.  It took me four tries to hit the target, which I wasn’t very happy with.  Pete stepped up and with a beautiful cast, hit the targets, achieving a score of 2, which is the best score possible! 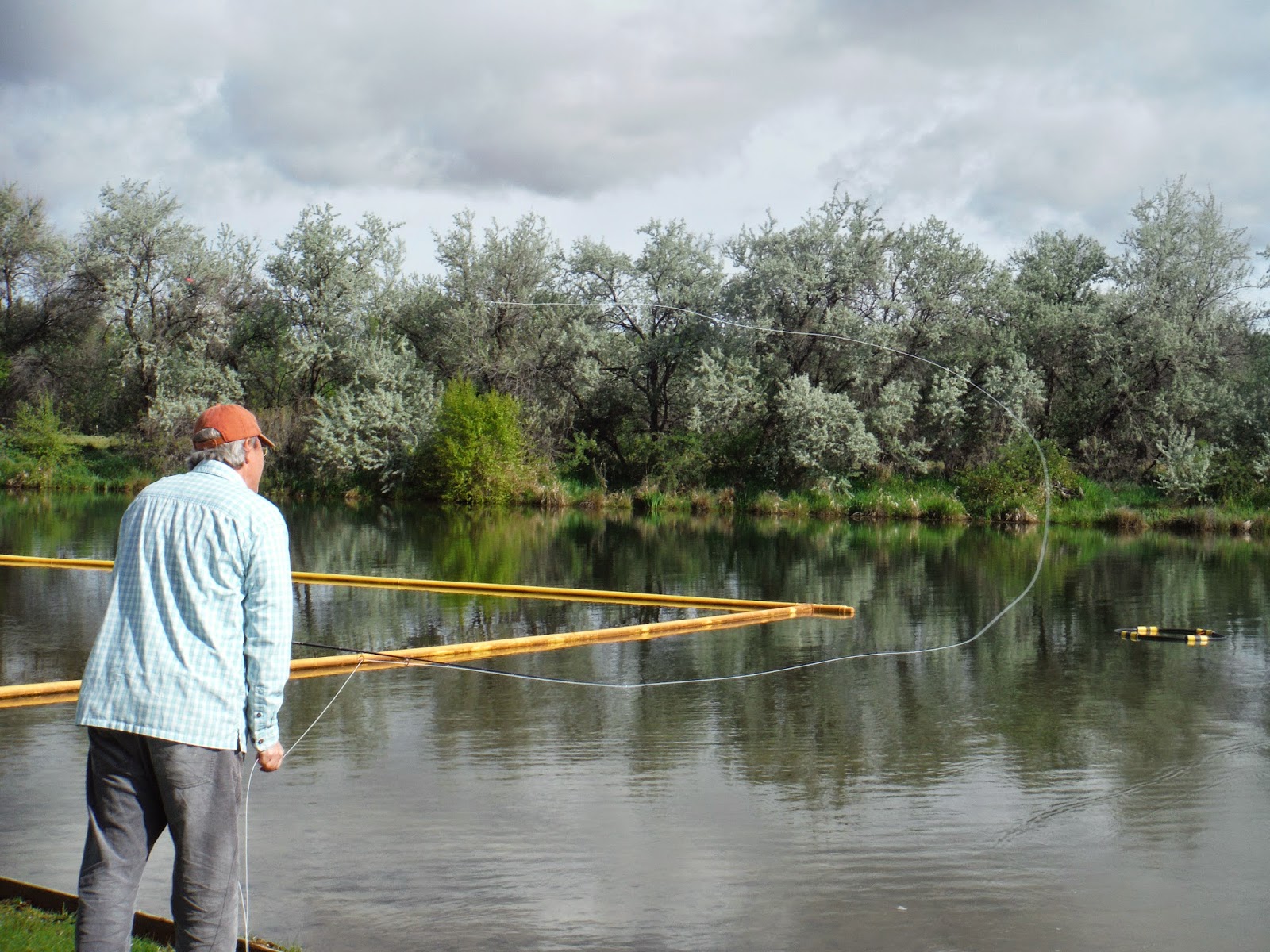 Todd was up next, and with a few casts he put his indicator yarn in the hoops. Next was Travis’s turn. 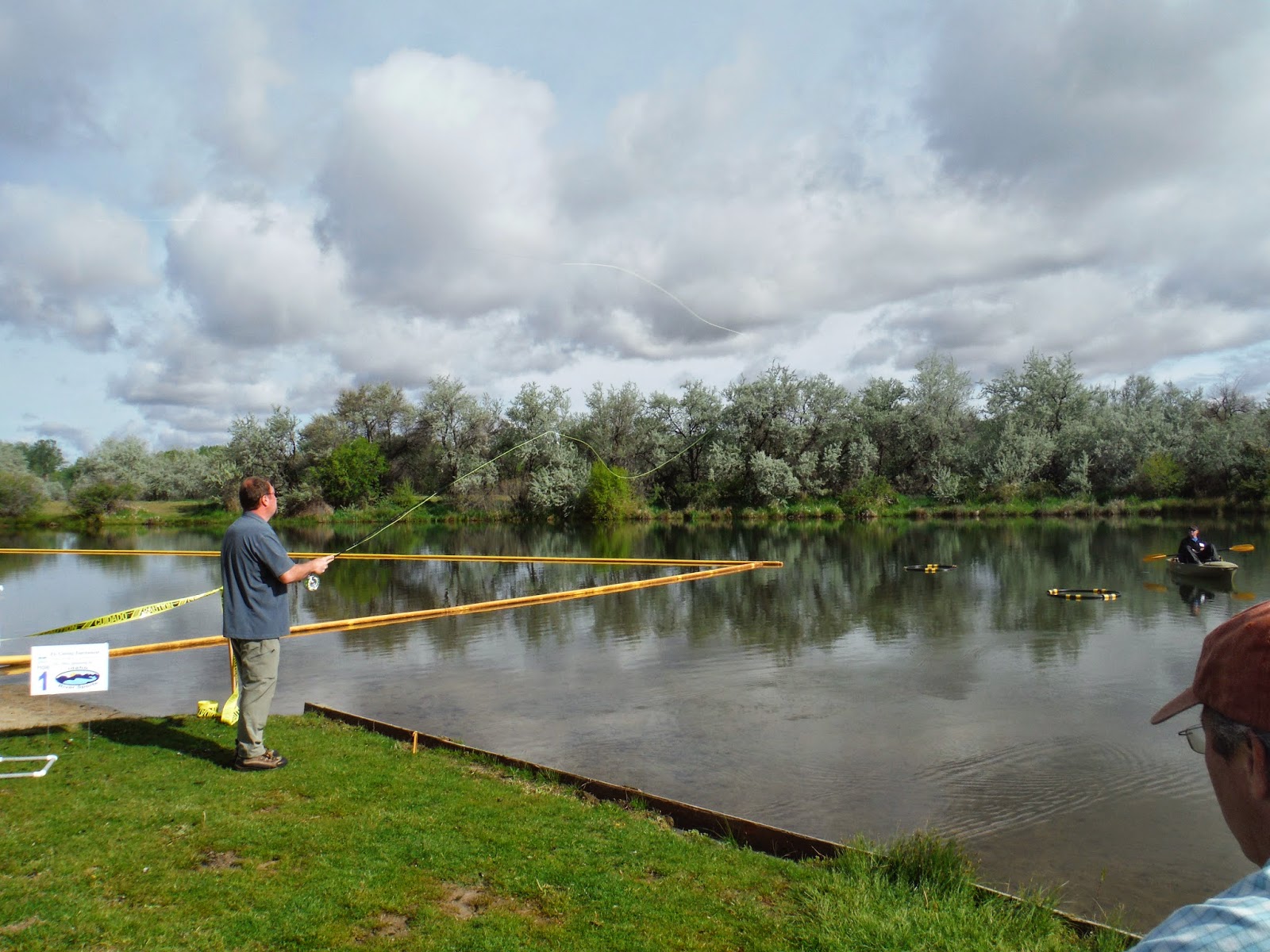 Each hole had a par and a maximum limit, therefore you only had so many chances to hit your targets in your allotted time limit.  Travis approached the hole and started to peal off his line.
“I’m going to get a better score than Erik!” Travis said, glaring at me, “That’s my only goal right now.”  His distance was set, and the clock started after he lifted his rod tip to make the first cast.  In one attempt he nailed the first target at 55 feet, then looked at me smugly.  The snobby look quickly faded as he attempted to hit the target that was 70 feet away, and his indicator yarn fell about 10 feet short. 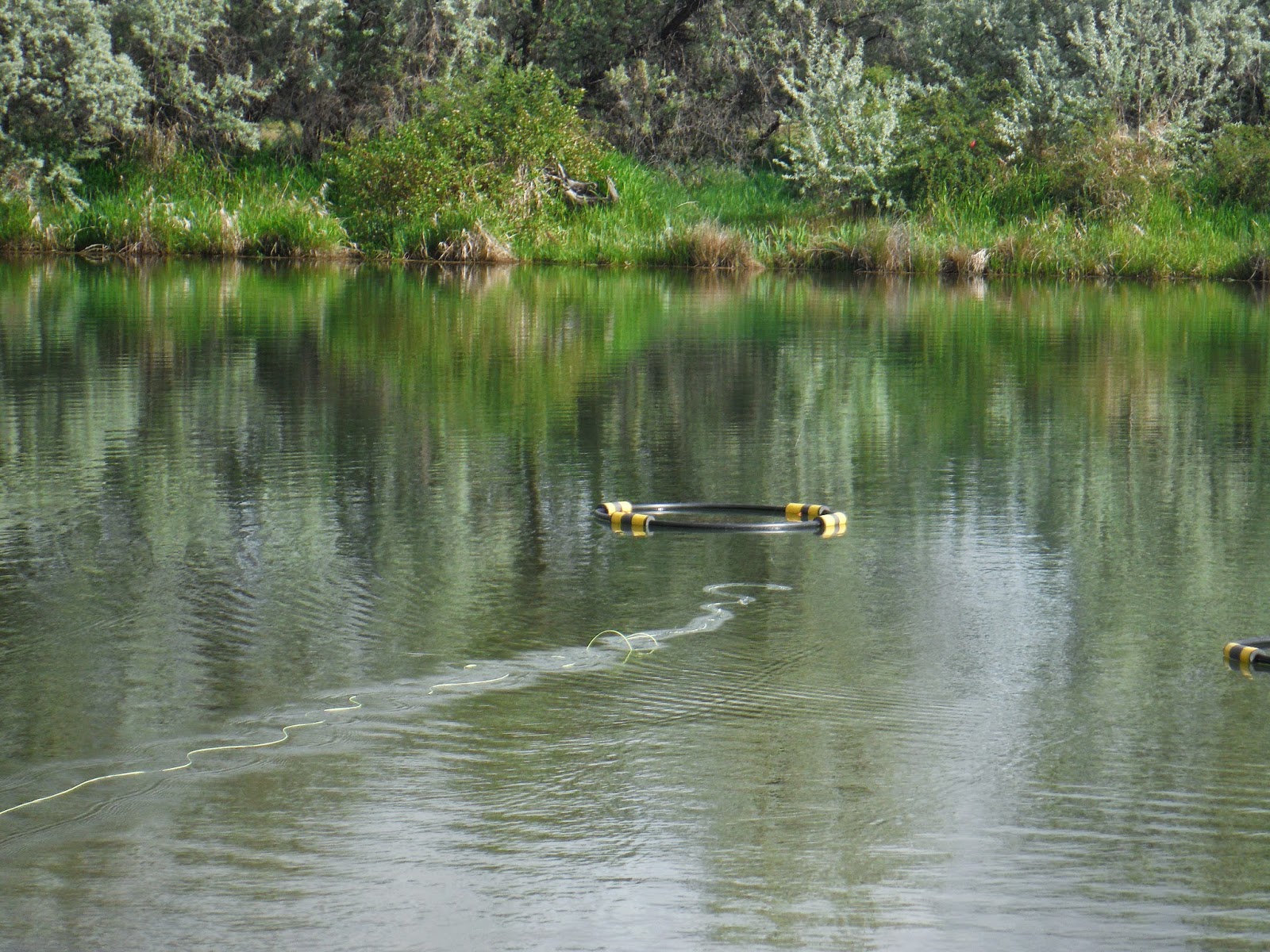 Twelve casts was the limit on this particular hole, and Travis was burning through them: 3, 4, 5, 6!
“Come on!” Travis yelled at his line, as it once again fell short of its target.
“Just try and hit the target!” I yelled over to him, offering up some needed advice.
“30 seconds…” The judge announced, which sparked panic in Travis as he now held the rod with both hands.  Forgetting technique and relying on sheer power, he attempted the cast again and again. 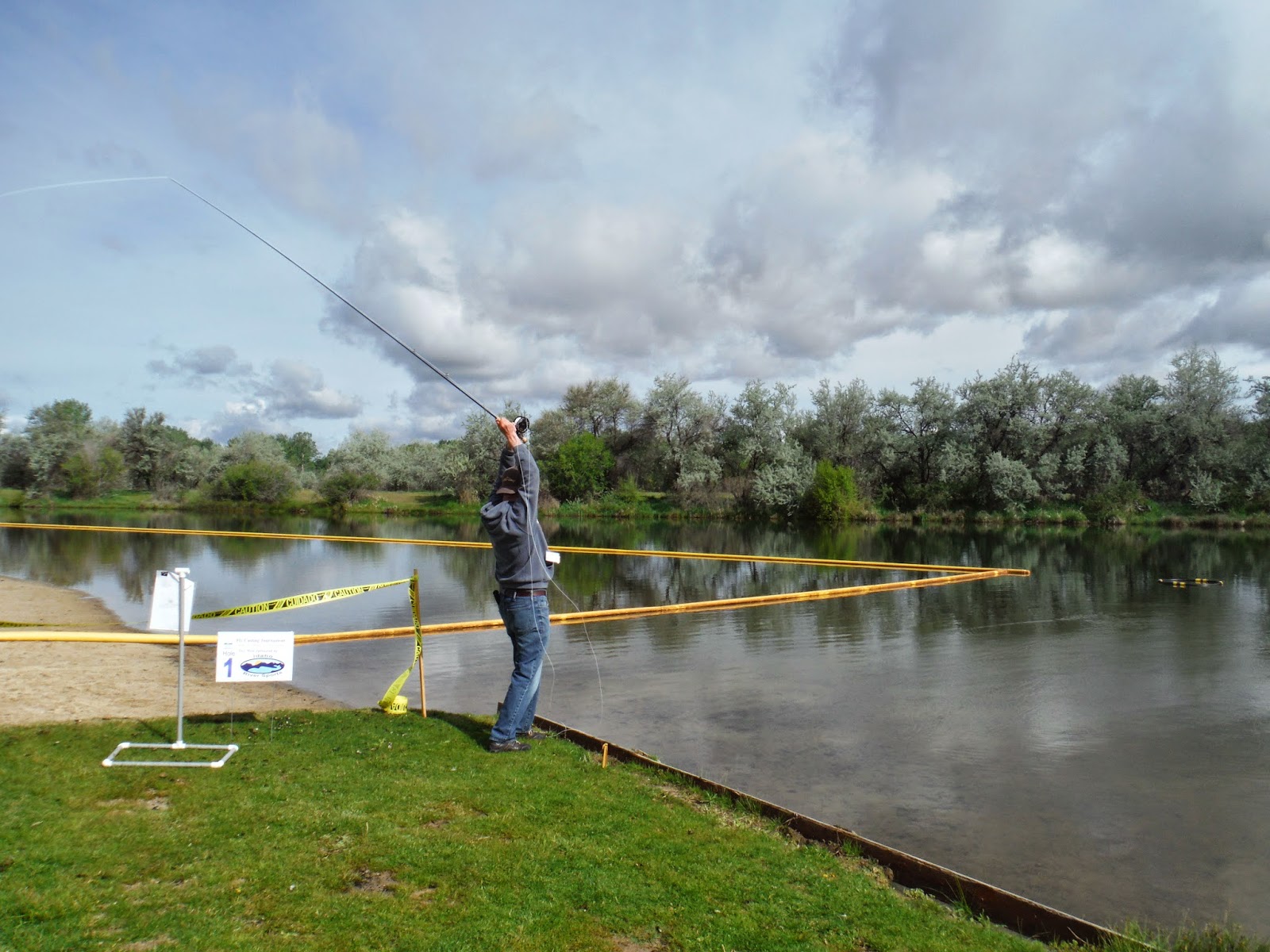 “Get out there, damn it!” He yelled, as his indicator kept getting closer to where he was standing and further from the target. 9, 10, 11, 12.
“You’re done.” The judge announced, but Travis kept casting his fly rod like a mad man chopping wood with an ax.  13, 14, 15, 16, 17! During Travis’s frantic casting attempt, the spool on the rod he was using flew off, which was the only thing that convinced him to stop. Thankfully the highest score you can get is a 12 and, as if he was fooling anyone, Travis blamed his inability to hit the 70 foot target on the spool coming apart. 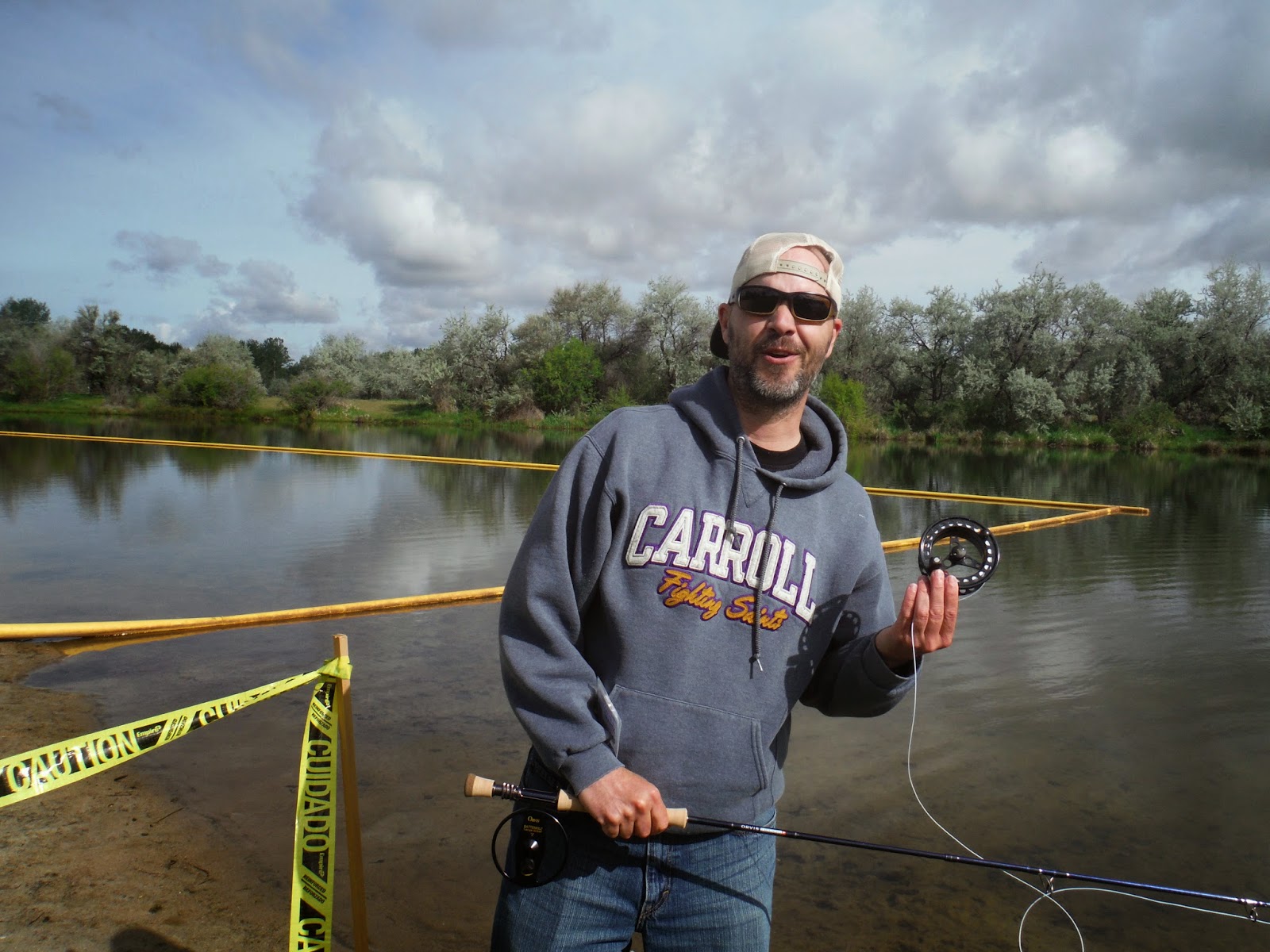 “I think that was a lot further than 70 feet.” Travis said as we walked to the next part of the course that was set up on land.  Casting on grass is much different than casting on water, and competition casting is a lot different than fishing.  I discovered that when I helped set up the casting course on the first annual Ted Trueblood casting competition.  Three years of practicing my casting has made me a better fly fisher and a stronger competitor on the course.  I went first on every hole, and knocked some of them dead!  However, we were nearing the standing loop hole where you need to send your fly line thought a three foot hoop.  Accomplishing this is no sweat, but this year they changed the hole, making it so you have to also send your cast through the hoop backwards. 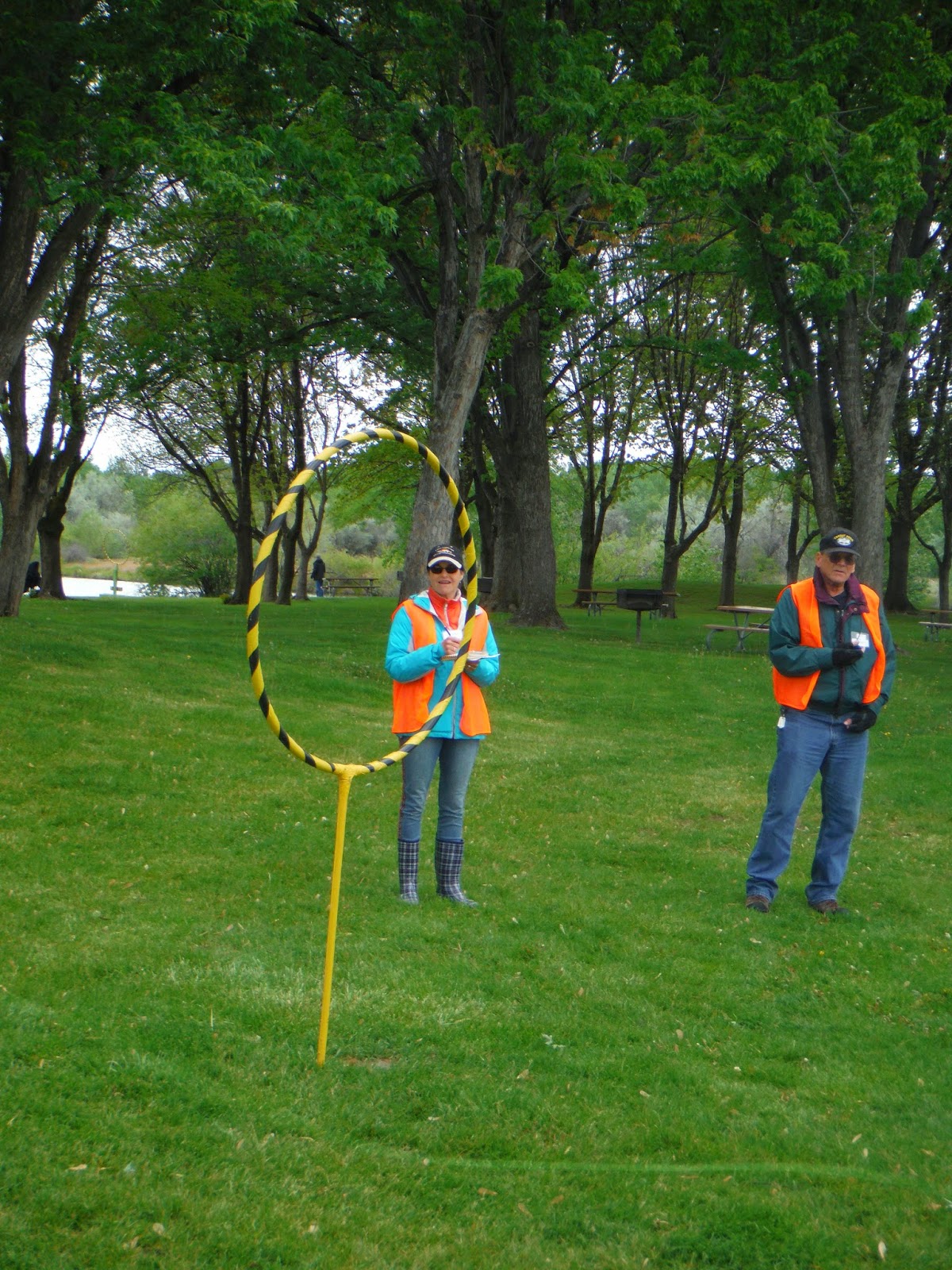 This was the hole I worried about the most, as I hadn’t practiced it enough.  I situated myself to cast and pulled my line off the ground, indicating to the judge to start the timer.  I easily sent my line through the hoop, and turned around for the second portion of the hole: backcasting into the hoop.  2, 3, 4, attempts had failed, and I was stressing out.
“Calm down.” Pete suggested, as he saw the frustration in my face.  Travis chimed in as well, “It’s about time you fail at something!”
I stood quietly, then made another attempt: 5, 6.  I took a deep breath.
“30 seconds.” The judge announce.  The highest score you can get is a 12, and if you run out of time you automatically score a 12.  7 missed, and by now I was pissed.
“I’m taking pictures of all this frustration!” Travis said happily, but I was not about to let my frustration take control.
“Ten seconds.” The judge said.
I have two shots left, I guessed, before the time runs out and I get slapped with a score of 12.  Calm, I said to myself, as I sharply picked up the line.  I kept my rod tip high to tighten my loop and, with a powerful haul, I sent the line shooting behind me, right through the hoop! 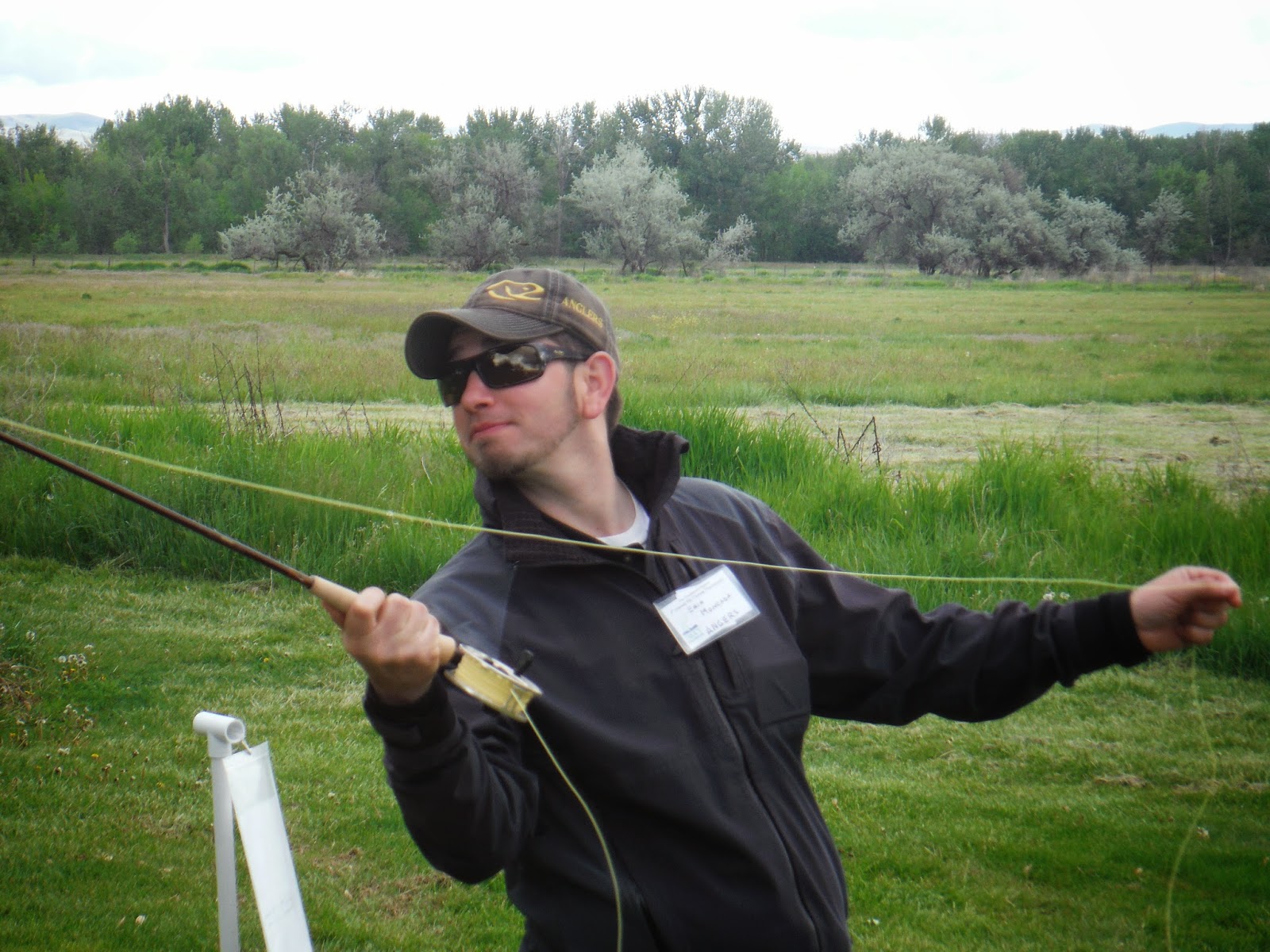 “He got it!” The judge yelled, “Just in time!”
“Nice job!” Pete said, as I stepped off the casting platform.  You can’t score eights if you want to place in this tournament, I thought frustratedly.
It was now Pete’s turn, and after easily sending the fly line through the hoop forwards, he turned around and crouched down, changing his technique and finishing the hole in 4 attempts. 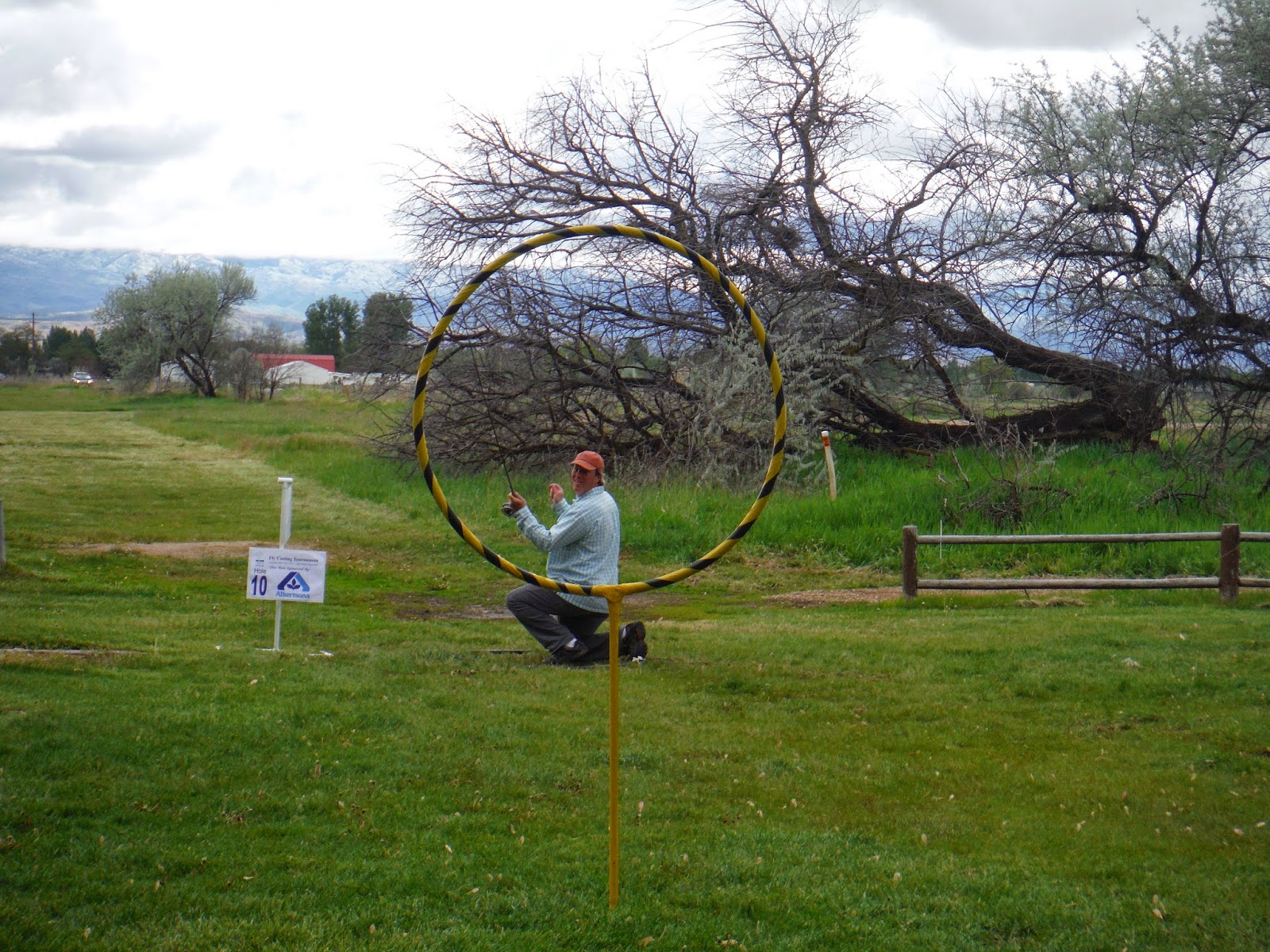 Sure, I was a little upset at my number of attempts, but that didn’t come close to Todd’s way of dealing with his inaccuracy.  Once again the forward cast through the hoop was no problem, but the back cast brought out the best in Todd.
“This is $%&@*#! STUPID!” Todd yelled, as he missed and missed the target.
“Why the &*#$ would anyone need to make this cast?!” Todd yelled, after the judge yelled 12 and his turn was up. 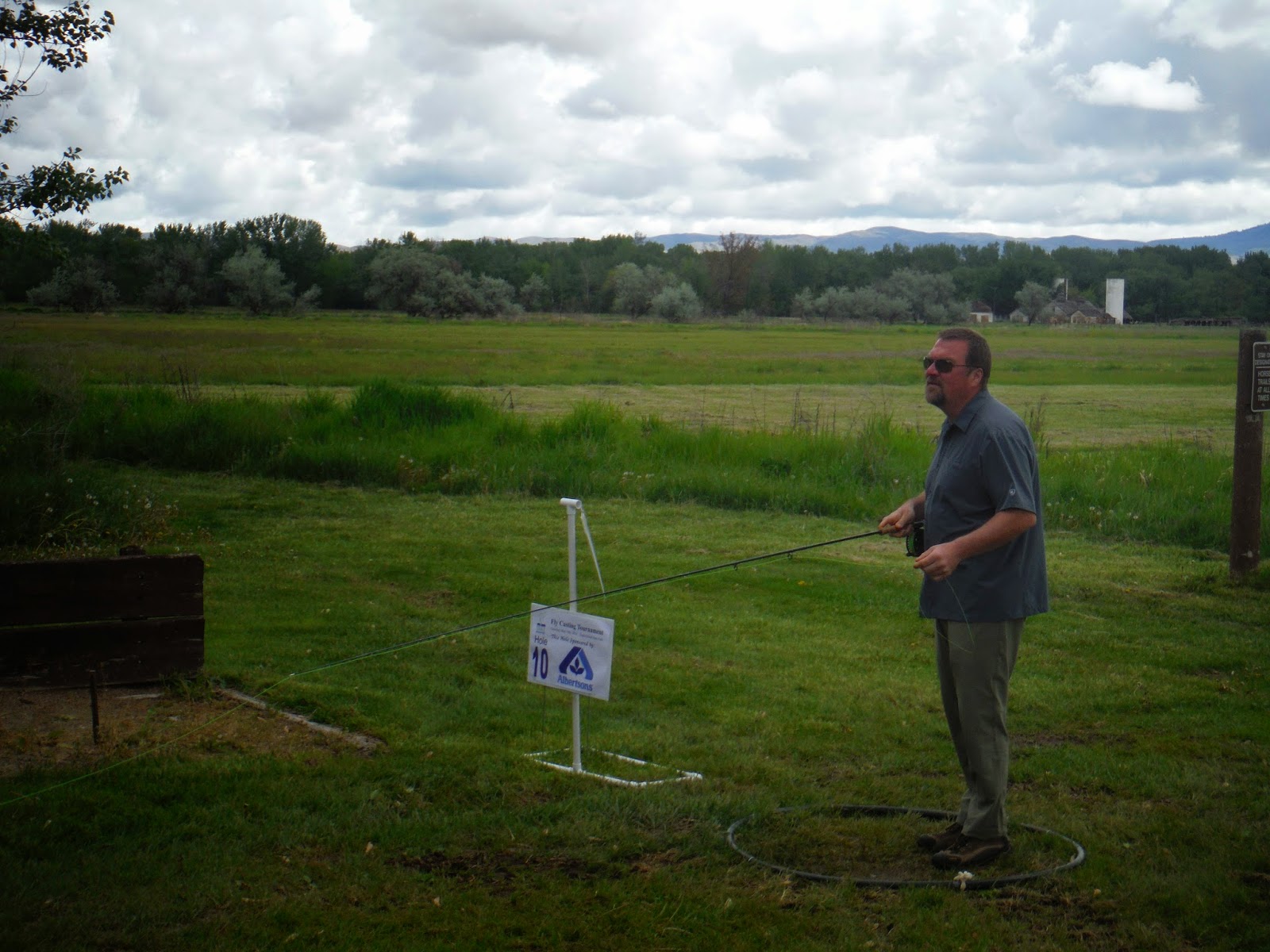 Travis did no better, hitting the forward cast and failing at the backward cast.  He even went as far as adopting Pete’s technique of kneeling down, along with adding his own twist of placing his hood over his head.  In the end, nothing helped him. 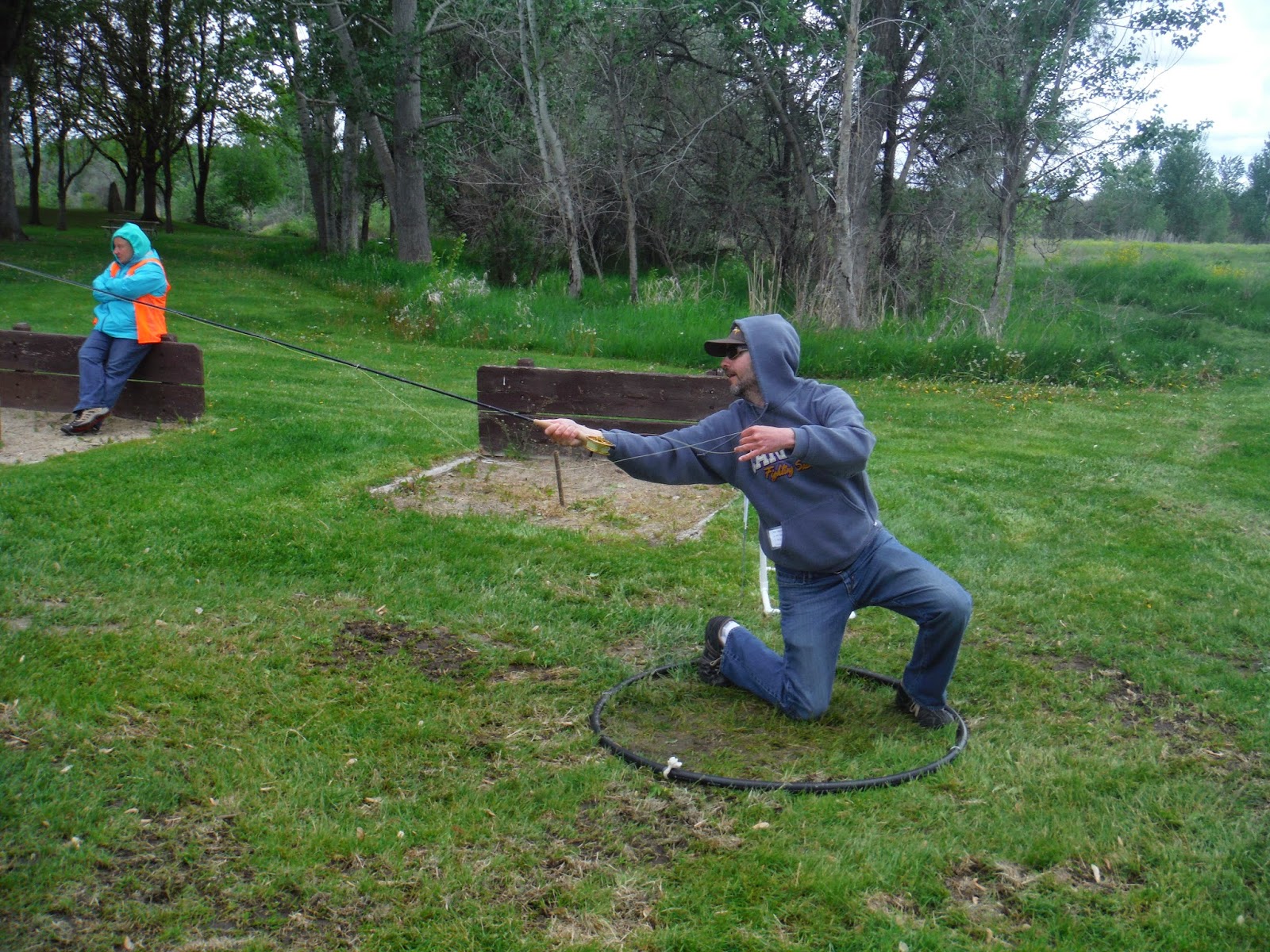 Our combined score was not low enough to place in the top three.  In fact, we finished in fourth, just a few casts away from placing.  The gold division of the casting competition was over and the silver teams gathered to cast.  Initial Point Family Medicine sponsored the silver team I was on, and together Andy Anderegg, Evan Williams, Todd Packer, and myself made up the team, accompanied by my wife, Gracy, who was the official score card holder. 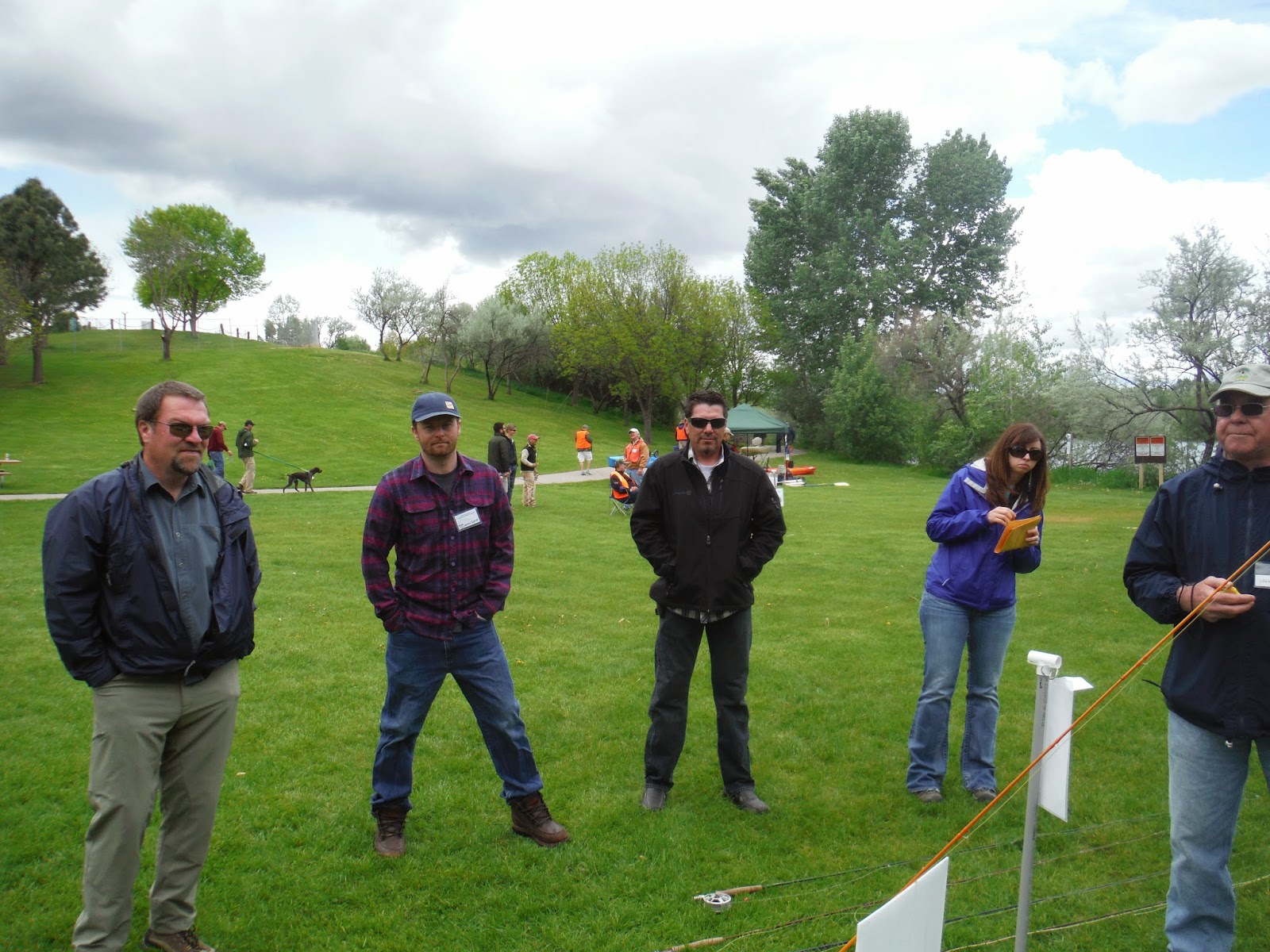 The horn blew to start the competition, and Andy came up to me and said, “Remember what you told me last year when I asked for advice on casting the competition?” He said, getting his rod ready.
“No.” I replied.
“You said to, ‘do what you do’.”
We both laughed at that while Gracy rolled her eyes.
“I don’t remember saying that, but it does sound like something I would say.” 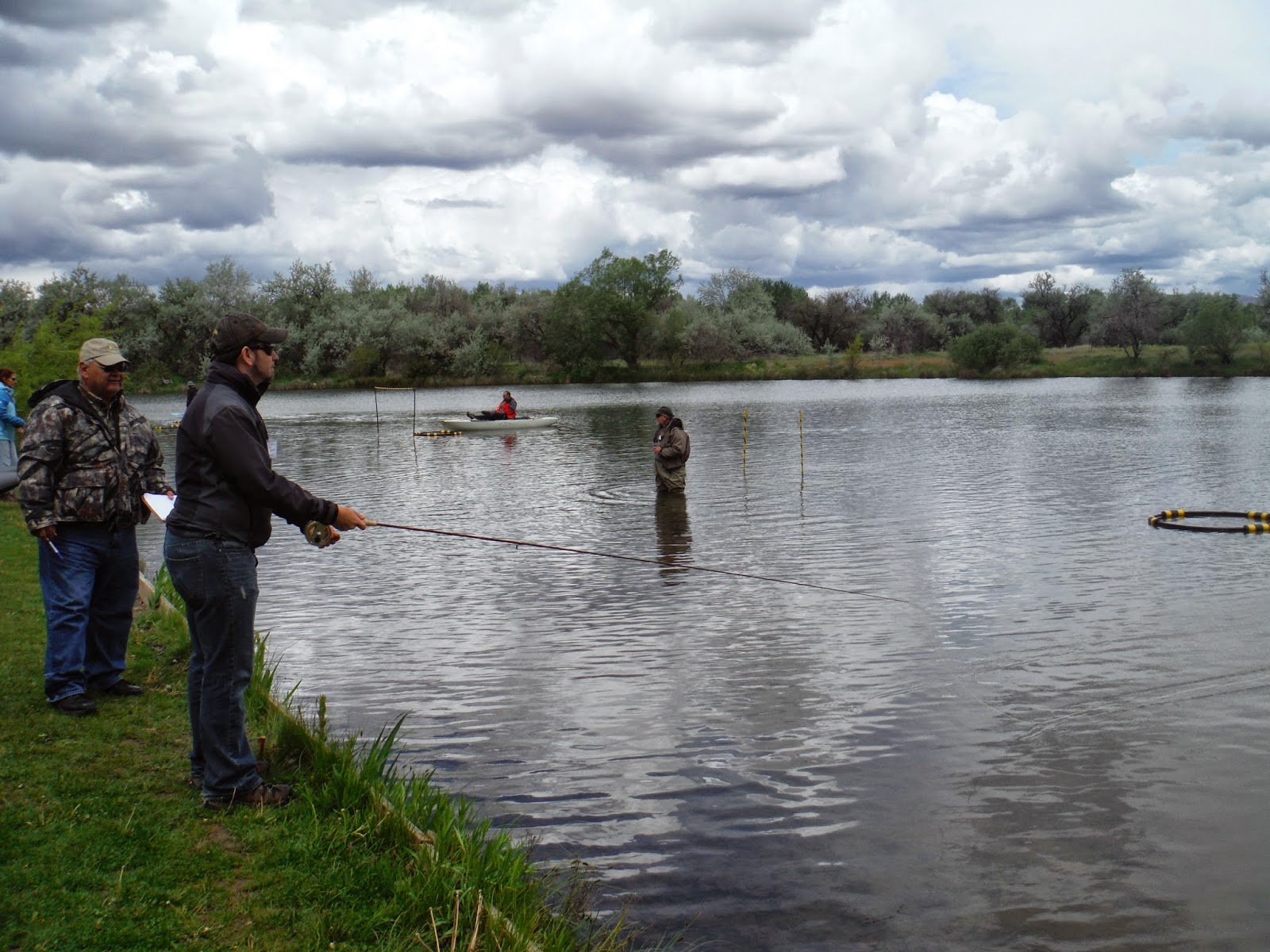 Together we took on the course, and each of us was doing pretty well.  Andy nailed the roll casting hole, getting the lowest possible score. 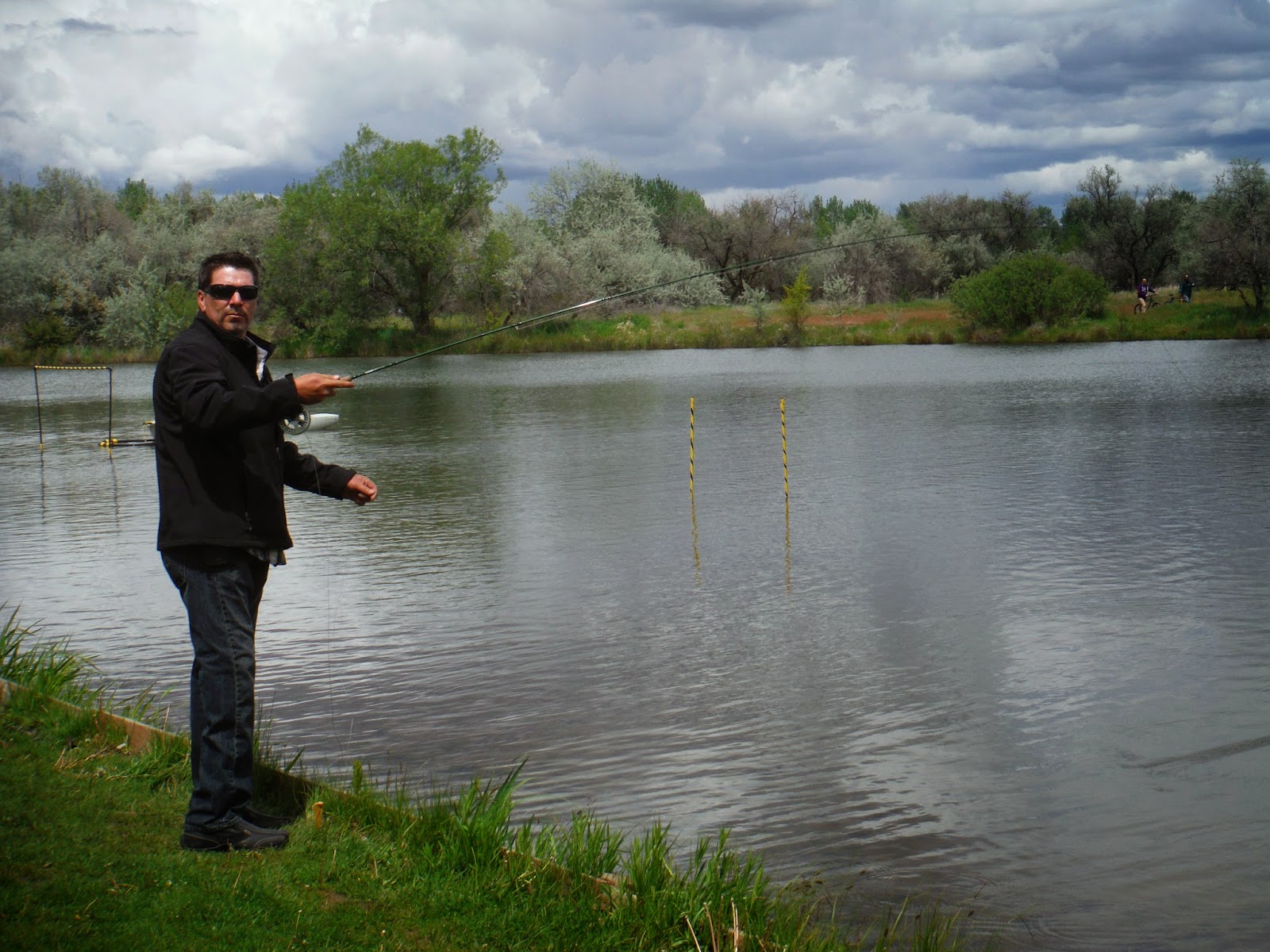 Todd picked up a low score when casting under an obstacle.  His Helios 2 was treating him well this time around, saving grumpy Todd from rearing his ugly head. 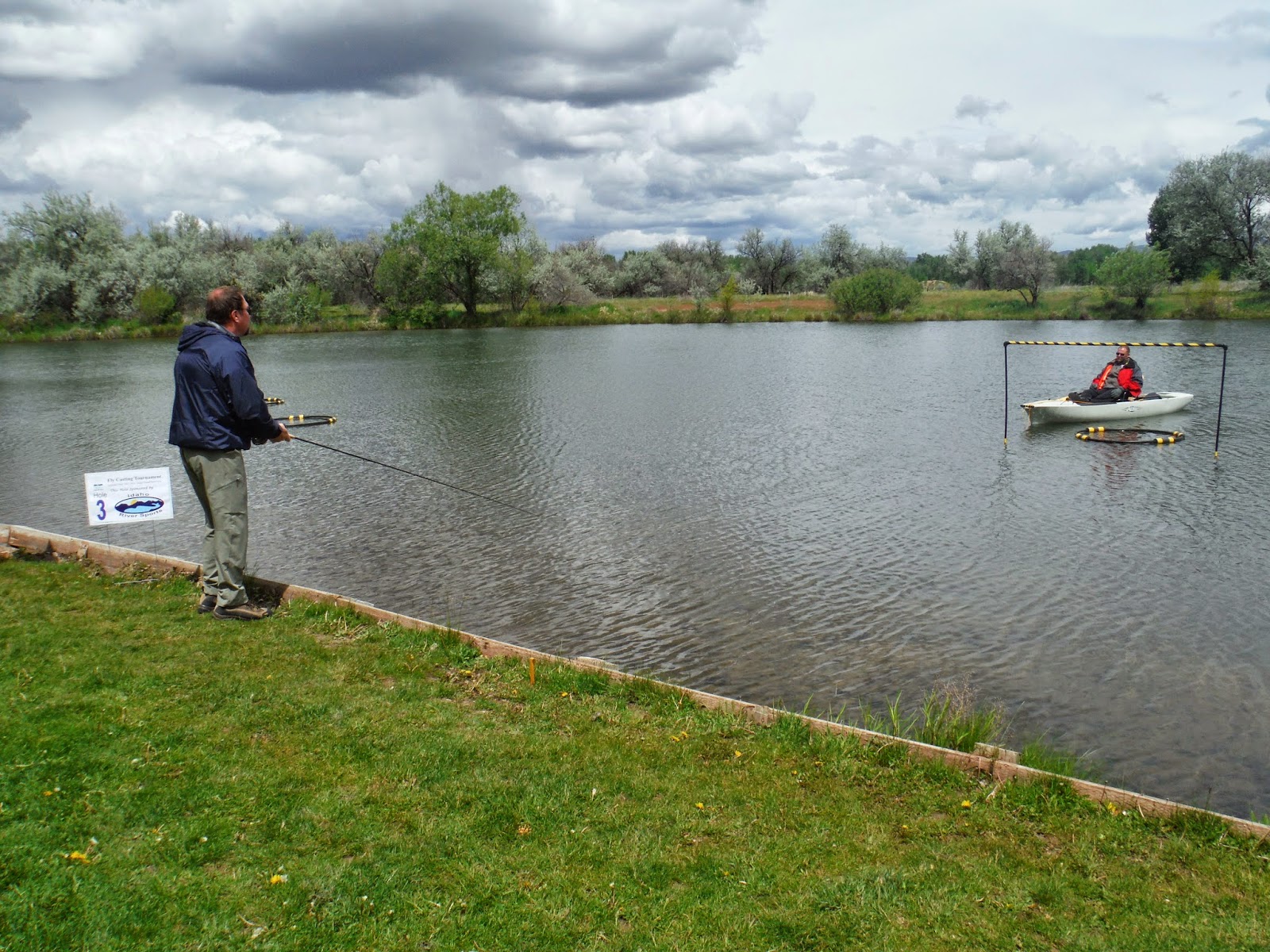 This was Evan’s first time casting in a competition.  He picked up techniques quickly, watching us cast first at every hole. 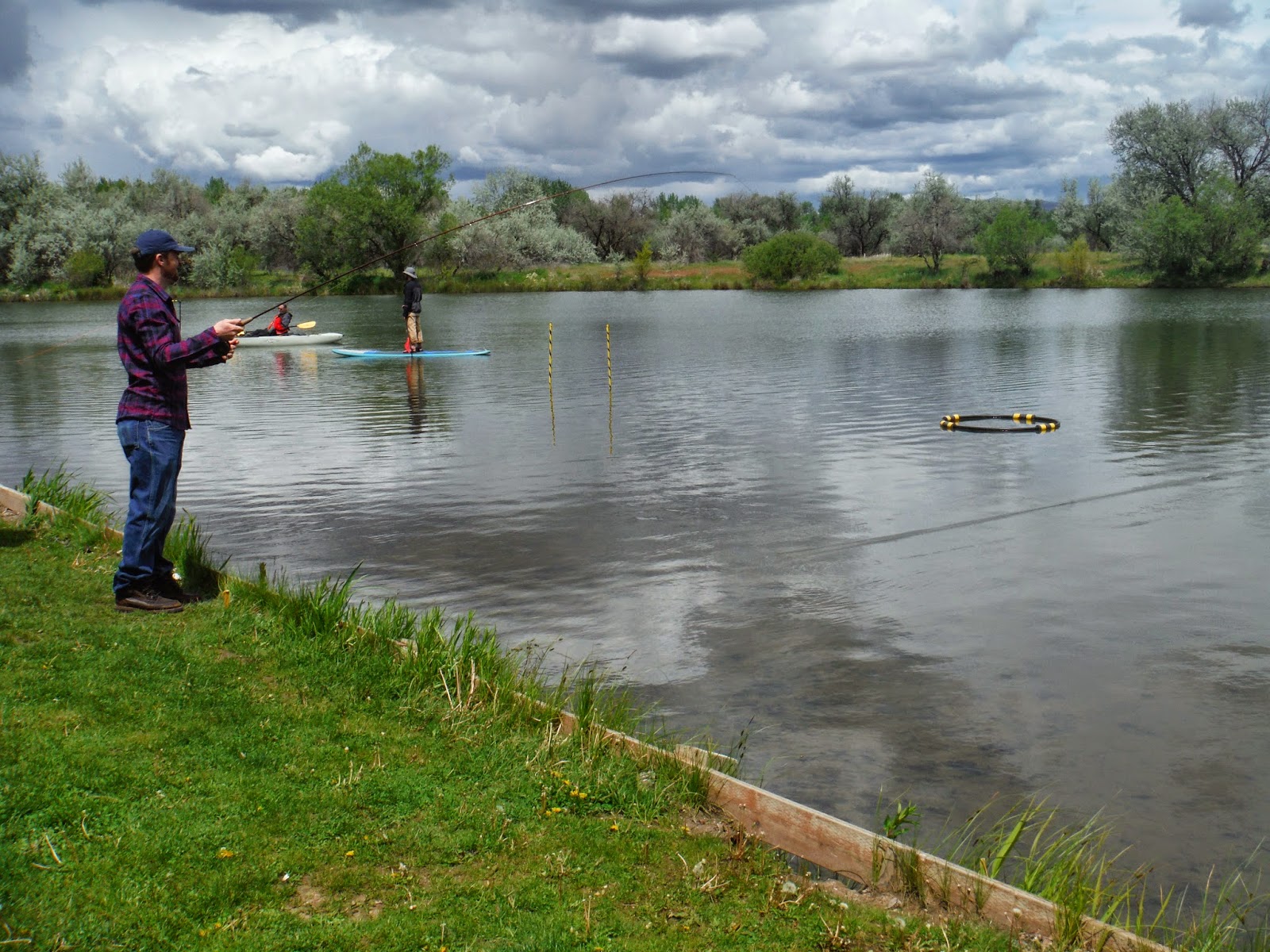 The wind had picked up significantly when we arrived at the bone fish hole.  I was up first, and started to cast.  The wind was now blowing so hard, my hat threatened to blow off my head.  I had no problem hitting the close target, but the target that was furthest away seemed to give me trouble.  I stood waiting for the wind to die down, if only for a second, so that I could hit the target.
“What’s my time?” I asked the judge, who looked down at the stopwatch.
“One minute thirty seconds.” He said, as I stood there.  I could at least wait one more minute for the wind to die down, and the minute went by fast.
“30 seconds!” The judge announced.  The wind was blowing hard, and I had no choice but to cast.  A few more failed attempts were frustrating me, before I decided to send a powerful cast out to the left of the target.  The wind brought the indicator down fast, just inside the target.
“It’s in!” The judge yelled out in the water.  I was not happy with a score of seven on that hole, but luckily my teammates casted better than I did, bringing our total numbers down. 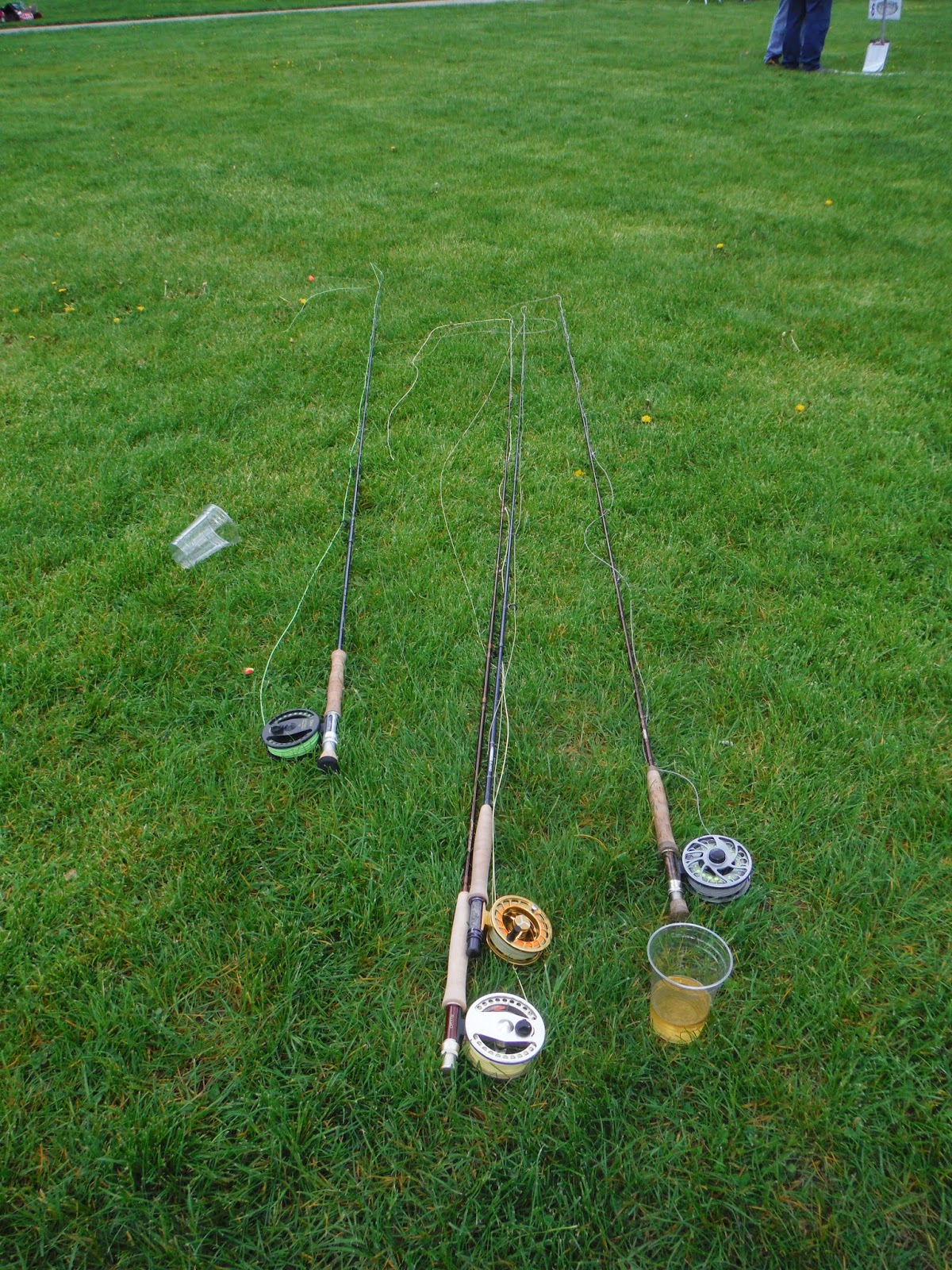 The wind was not letting up, and our scores were starting to climb. The two foot rings did us all in.  There was just no accuracy with the wind blowing the way it was. 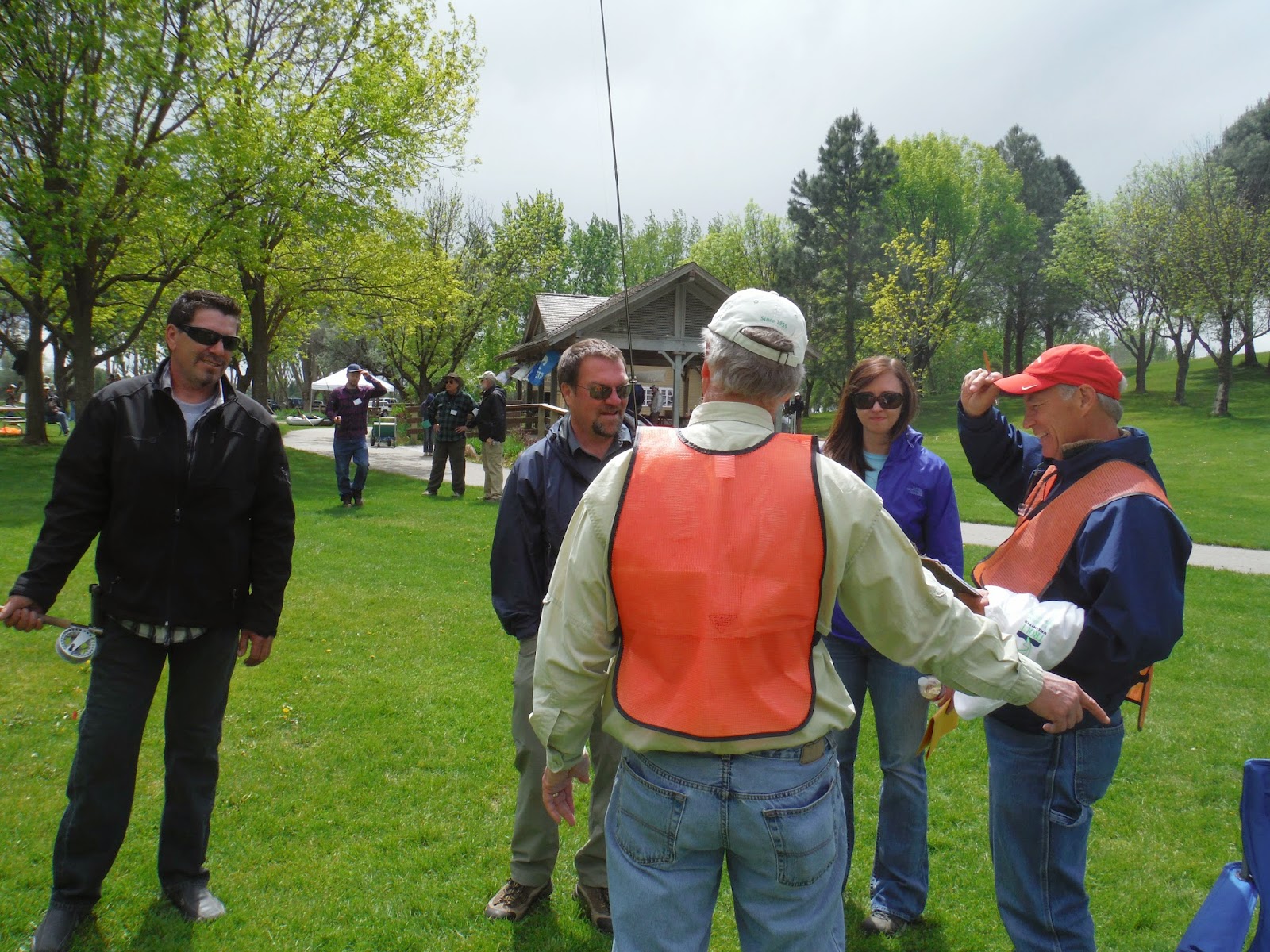 We were the first team to complete the course and, after the wind had picked up, I feared that those last holes had bumped our team from placing in the silver division. After all the scores were finally in, our team finished in third place!  We were all happy with how we casted, myself especially, after discovering that my score was the second best of all the contestants who participated.

Despite how good or bad we did, all the money raised was for the South Fork of the Boise River.  The recent fire out there torched the cottonwood trees, and a second planting of trees was now affordable, thanks to both volunteers and competitors who participated in the event.