Skip to content
Dust-devils the size of skyscrapers danced in the farm land that surrounded our drive out to Crab Creek.  The creek itself is a small oasis that flows through the middle of the desert near Moses Lake, but that part was completely out of sight on the drive up.
“Wouldn’t you rather go to Wenatchee?” My dad asked, trying to persuade me to change the location at the last minute.
“No, Dad.” I said.  I was a little upset because I wanted to go fish a lake that had tiger trout, but that all was put to rest because my dad wanted to walk and wade a river.
“Well, Wenatchee would have more trees.” He said, not giving up hope.
“We already have a river to go to, and we know it’s open to fishing right now.” I said, still annoyed. “And now, because you want to wade a river, we have to watch for rattlesnakes and ticks.”
“TICKS!?” My dad said, worried.
“Yep, thousands of them. They’re everywhere this time of year.” I added, spreading it on thick.  This worried my dad to the point of completely covering up before fishing.
“Why do you have all that stuff on, Dad?” I asked.
“I don’t want to get a tick on me.” He replied, his voice muffled by the buff around his face.
“Well you look like a fly fishing ninja all covered up like that.” I said, before I snapped a picture. 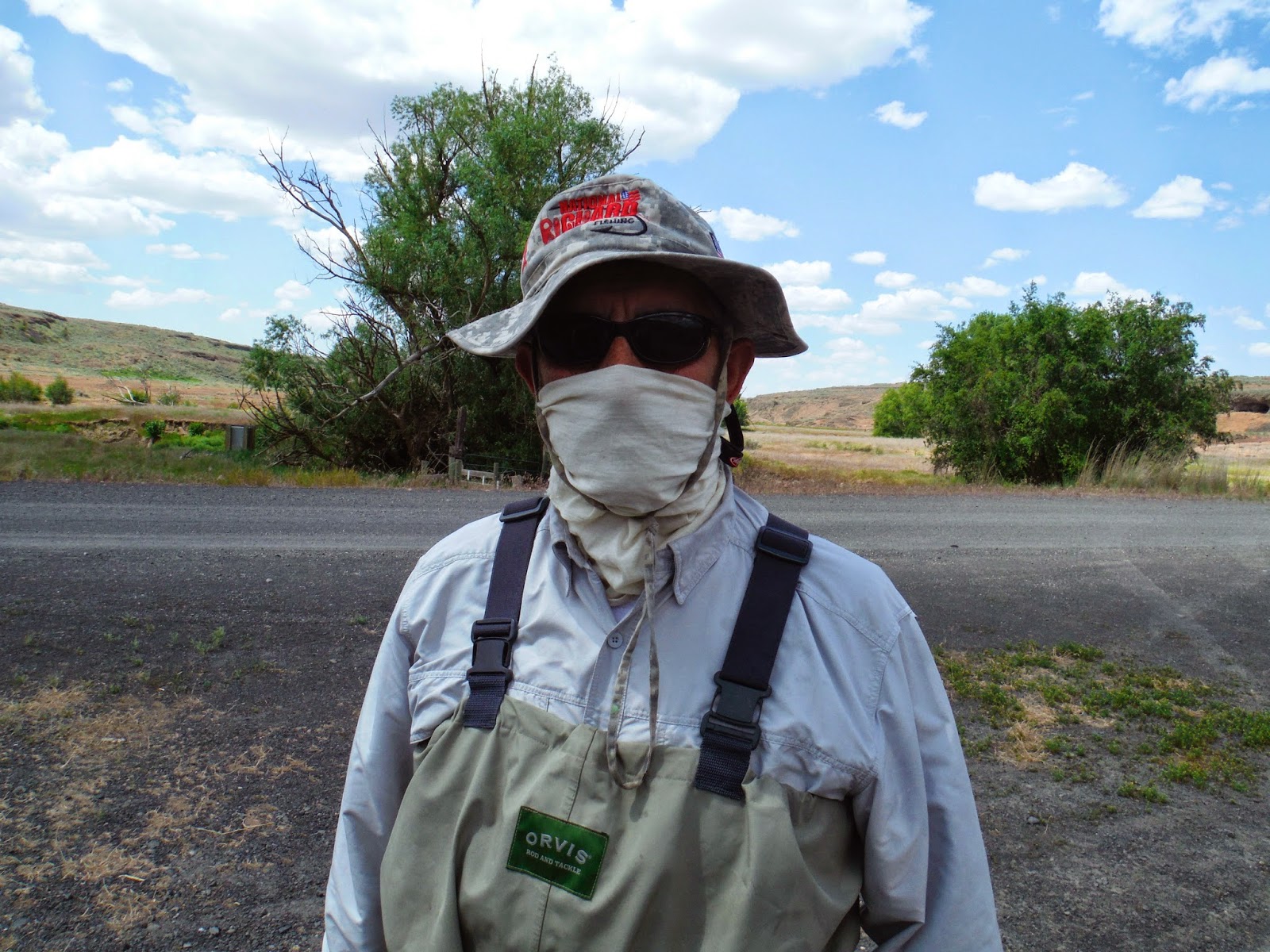 The cloud cover offered up some shade that dropped the temperature to a cool 70 degrees, making this a perfect day to be on the creek.
“Wow!” My dad said, at first sight of the creek. “This is really cool.” The lush surroundings lifted the mood, and especially after our eyes caught the sight of rising fish. 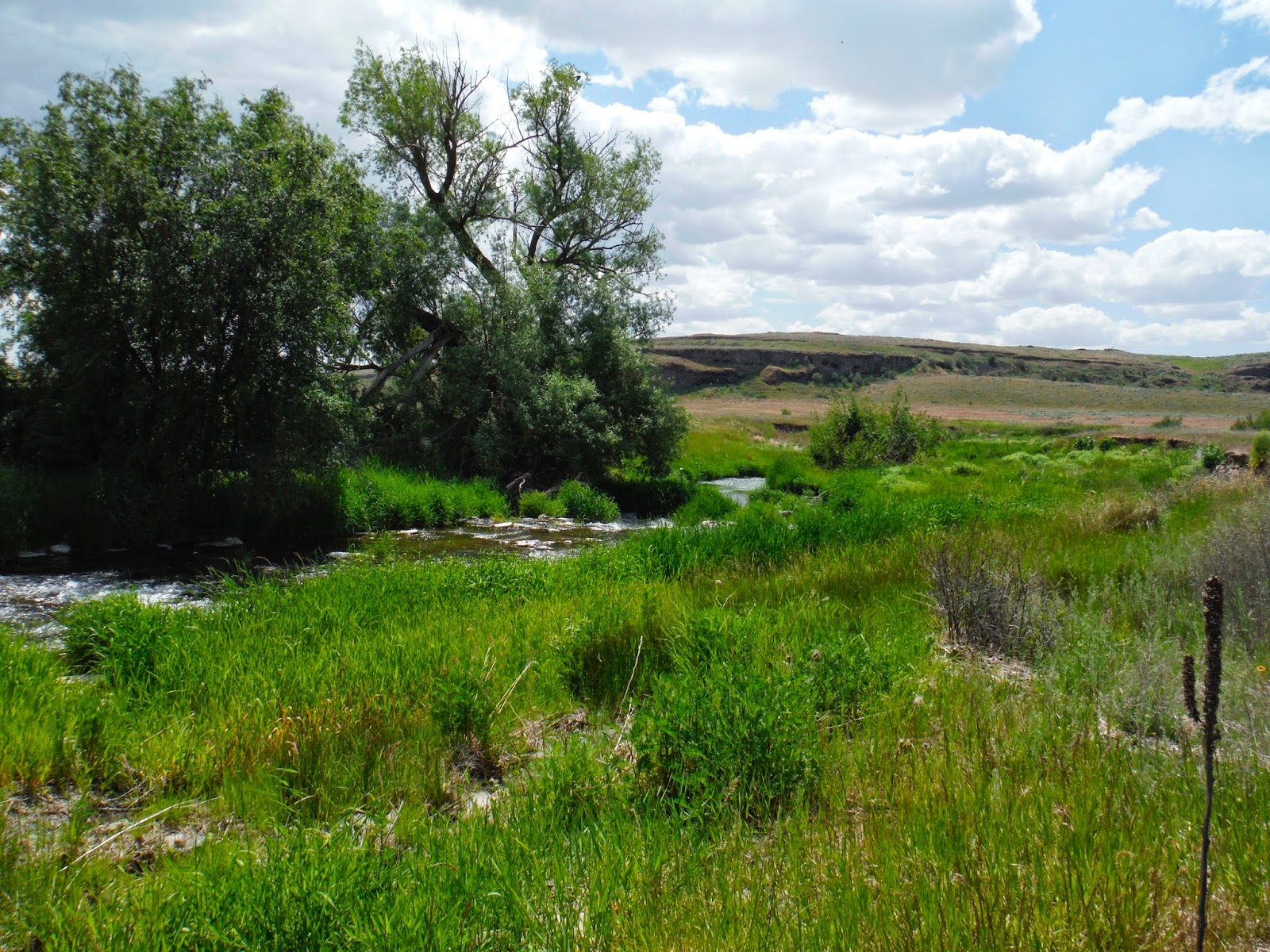 “Up here, Dad!” I called out, pointing to a small run with actively feeding trout. I really wanted my dad to catch a fish, so I kicked back and watched as he bludgeoned the water with his fly line. 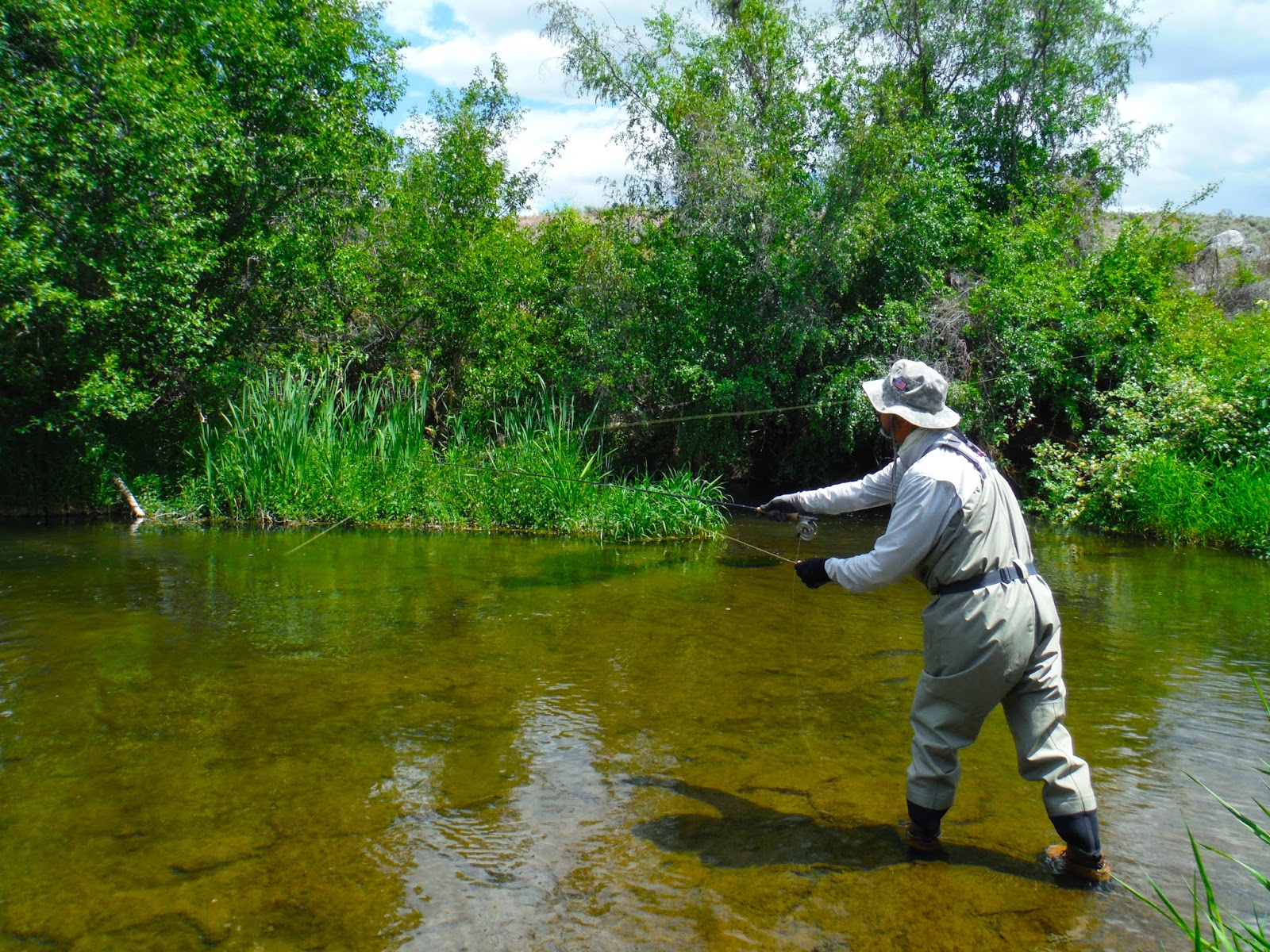 “Don’t drop your rod tip. Wait for your back cast. Keep your rod at ten and two. You need to control your line. You are spooking the fish with the way you’re casting.” I said, critiquing everything my dad was doing.
“It’s my fly.” He said, suggesting that was the reason he was not catching a fish. “I need a BSU colored one; last time that worked.”
“It’s not your fly, Dad. The fish are eating caddis, and you have a caddis fly on.” I said to him, as he started reeling in his line.
“Fine, let’s see you catch one!” He said, as if to challenge me.
“Okay.” I said, as I peeled line off my reel.  With my 8’ 2wt Superfine Touch fly rod, I gently casted my CDC caddis out to the feeding fish.  The caddis landed like a feather on the water, before a fish came up and whacked it!
“See…” I said, bringing in a fish about the size of a keychain. 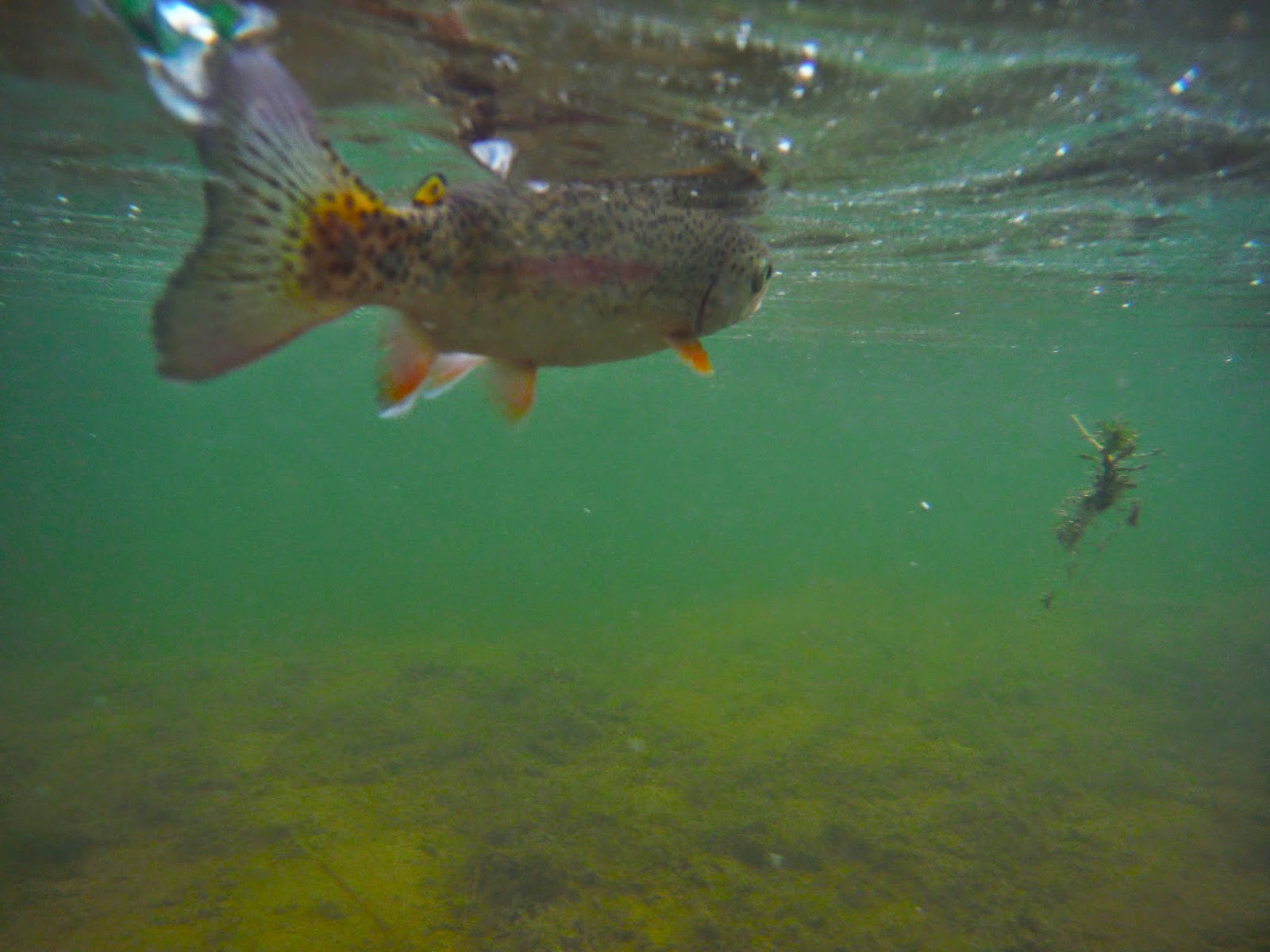 “Oooooooh…” My dad said, “So, essentially, you want your fly to stop in the air before it hits the water.”
“In this particular situation, yes.” I said, as we walked upstream to the next spot.

Pools of water offered good opportunities for catching fish, and I saw my dad just upstream from them.
“Dad.  Did you fish these pools?” I asked.
“No.” He replied.
“Did you just walk through them?” I asked, rhetorically.
“Yeah, is that bad?” He asked.
“Well, there could have been fish in them.” I said, before I suggested we continue upstream where the water became glass smooth. 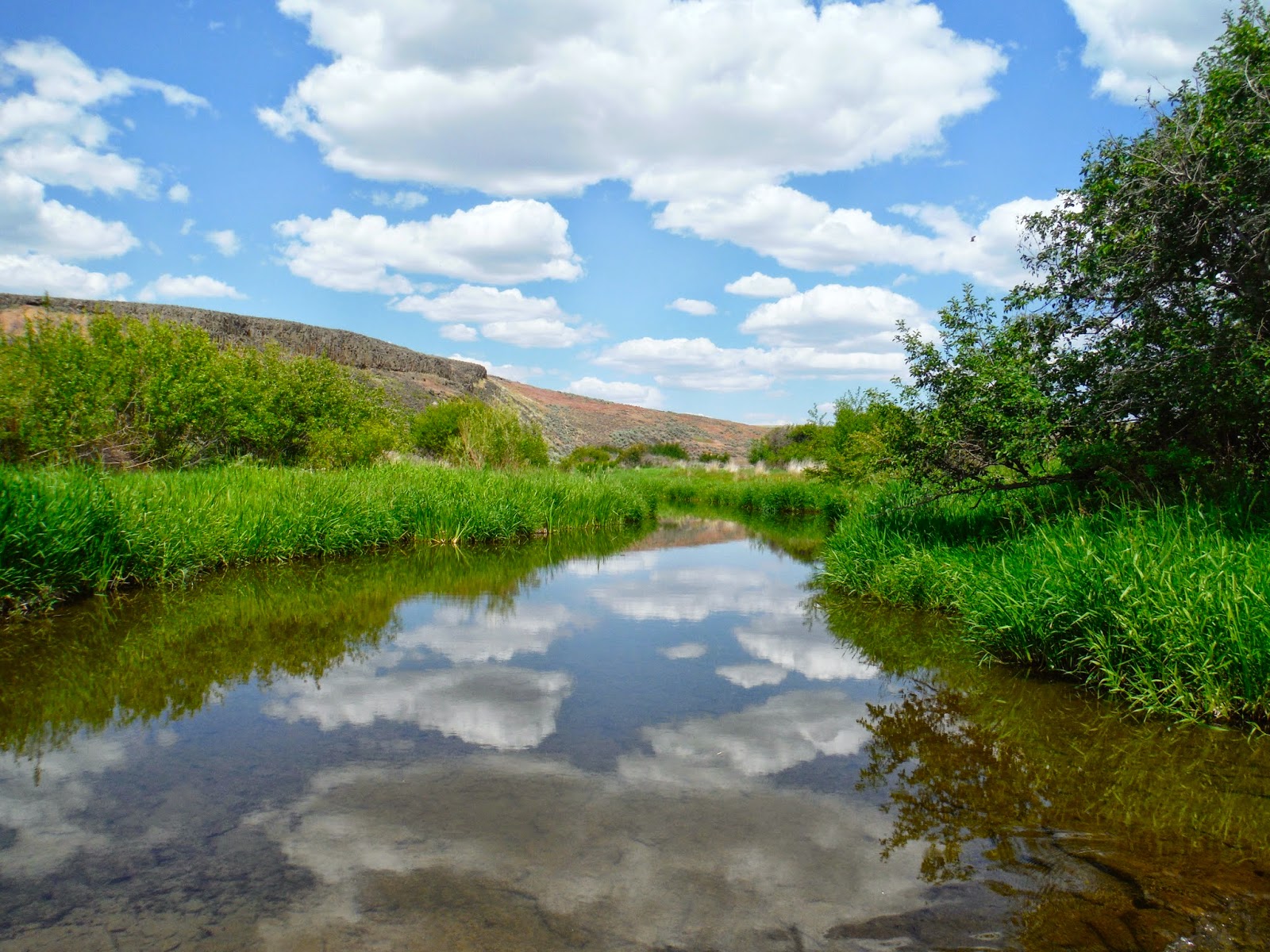 “Okay, Dad.” I said standing still and pointing to the water’s edge. “The fish will be hiding near the tall grass, and we need to sneak up on them slowly.”
“OK.” He agreed, and together we walked up the creek.  A small riffle on the smooth surface indicated a rising fish.
“Did you see that?” I said, stopping in my tracks.
“See what?” My dad asked. Just then the fish rose again, and this time he was on it.  The first few casts were a bit too far from where the fish rose, but the third cast landed right near the grassy bank.
“Perfect!” I said, watching intently at his fly. My dad kept his line taught, and a fish took!
“There it is!” I yelled, and my dad set the hook! 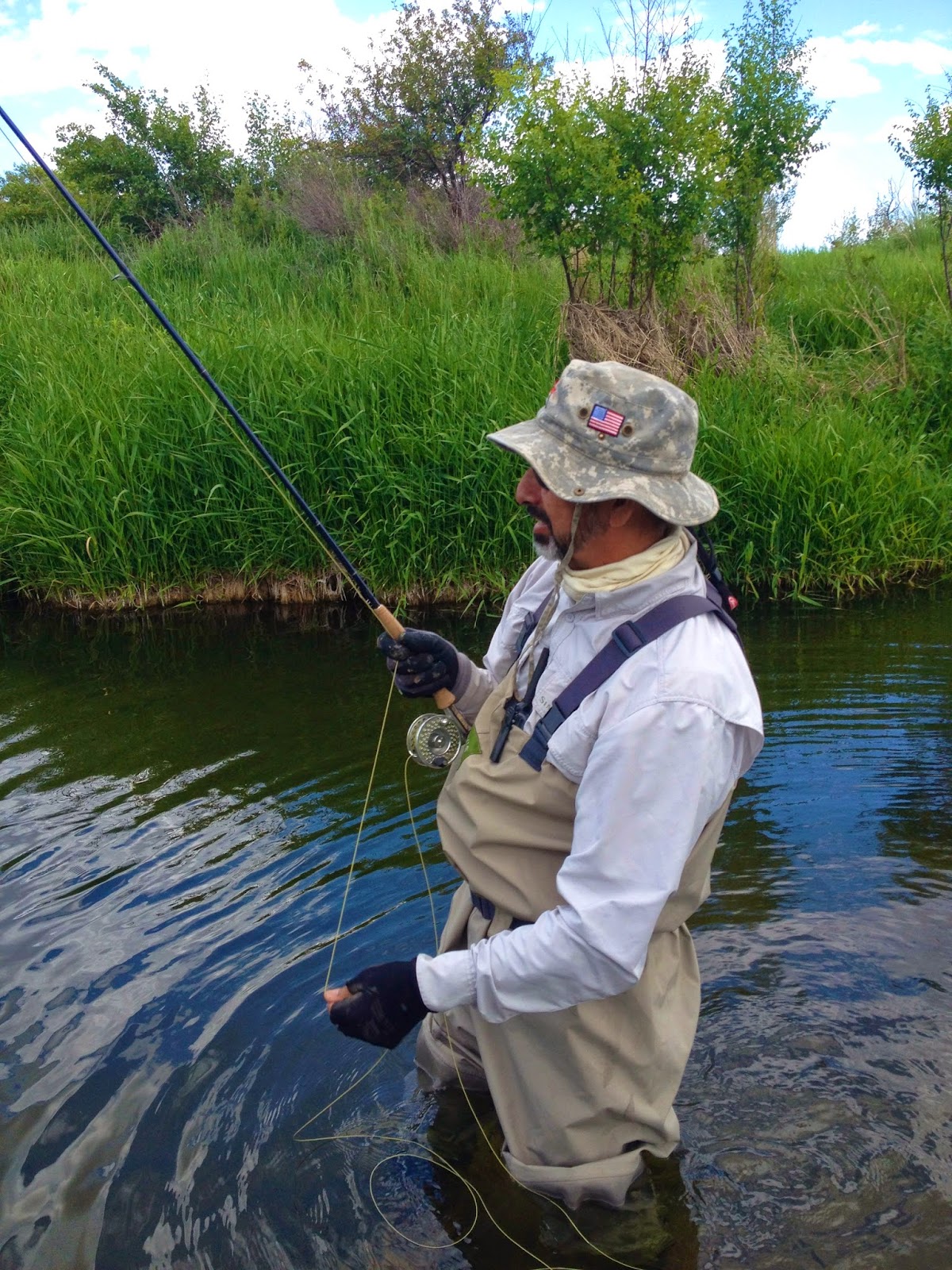 “I got it!” My dad said, happily bringing in his fish.  The little fish jumped and jumped as my dad striped in line.  He lifted his rod tip one last time, while I scooped his fish up with my net.
“Good job, Dad.” I said, after his fish was secure in my net.
“It’s nice having them on.” He said, talking about the fight of the fish.
“Yeah, let’s get a picture.” I suggested, and my dad picked up the fish for the camera. 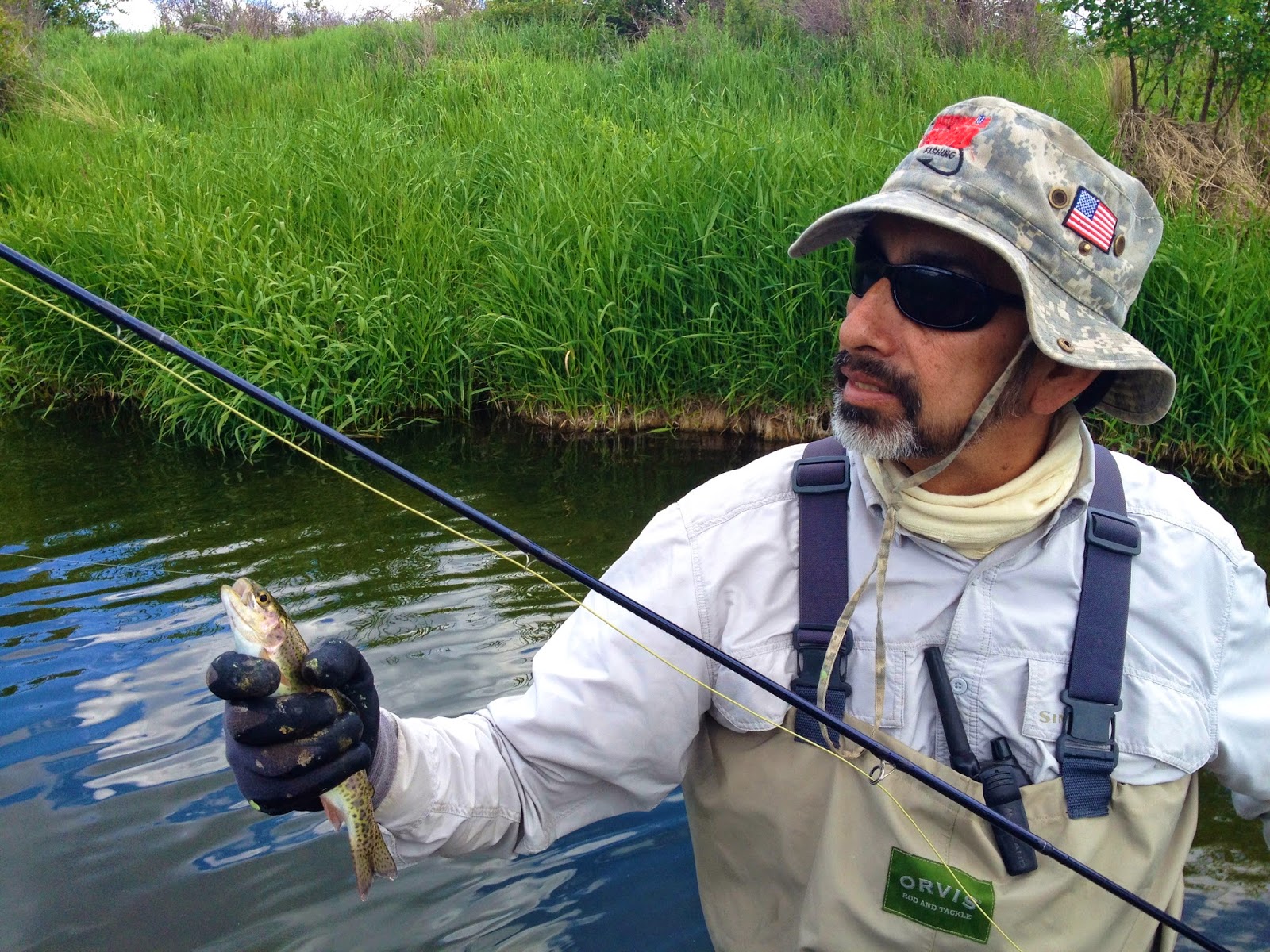 His fish darted back to the nearest undercut bank and he gathered his line, hooking his fly to his fly rod.
“Ok, your turn.” He said, and we switched places in the river.  I flicked out my CDC caddis, searching for a fish. Finally one took and I brought in the fish fast. 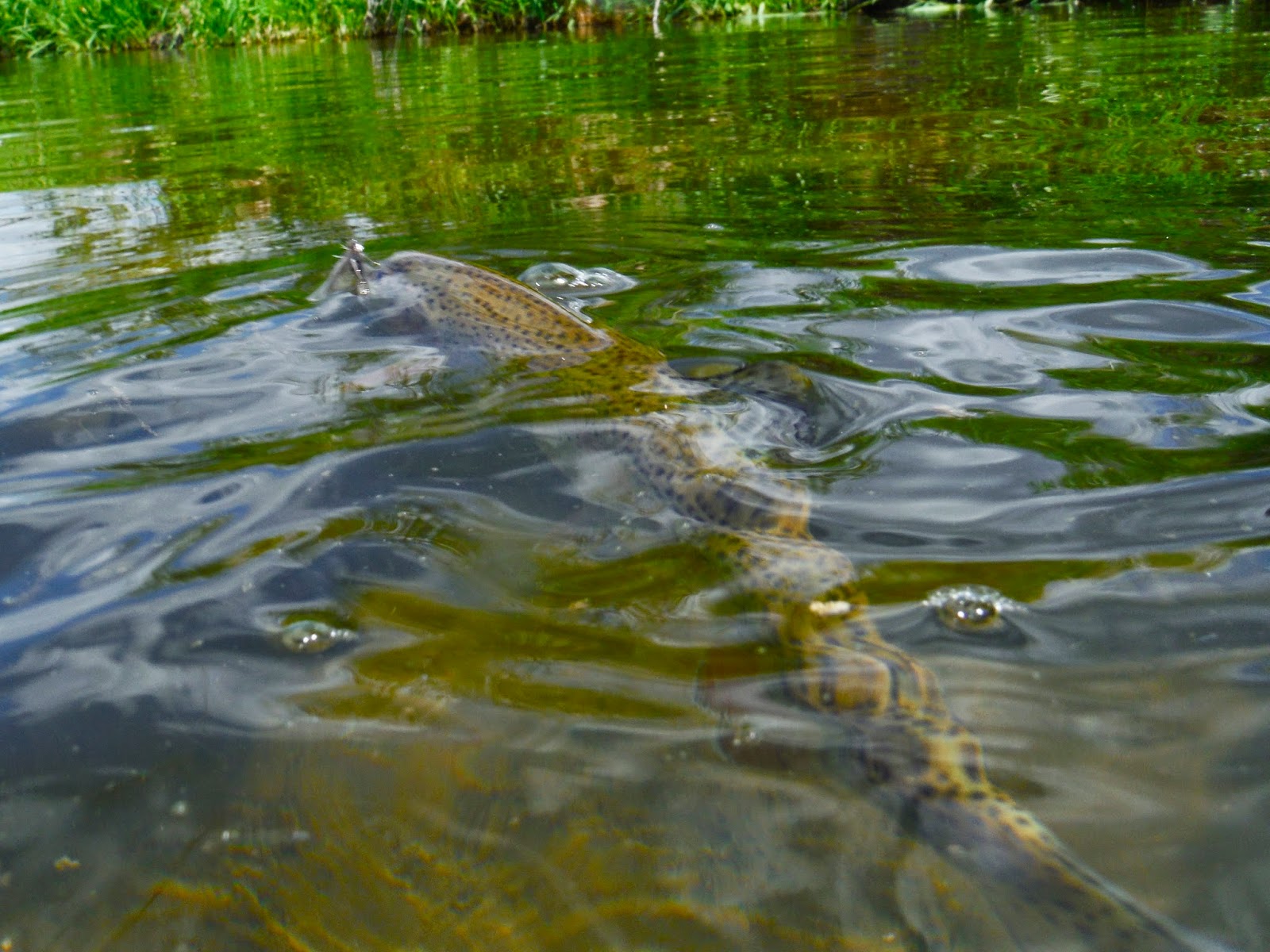 “How did you know there was a fish there?” My dad asked, after my fish swam off.
“I didn’t…” I said, “I was just casting to places that looked like there were undercut banks.”  I pulled back some tall grass, revealing an undercut bank for my dad.
“Oh, wow.” He said, “That goes back pretty far.”
“Yeah, the fish hide there so birds won’t snatch them up.” I said, “That’s why we are casting near the grass.  If there is a fish nearby it will come out and eat my fly, just like the last fish did.”  We took a few more steps upstream, and my dad was keeping his eyes on the undercut banks when something caught his eye.
“A crab thing!” He said, pointing into the water.
“Hey, it’s a crawdad!” I said happily, taking out my net and scooping it up for a better look. 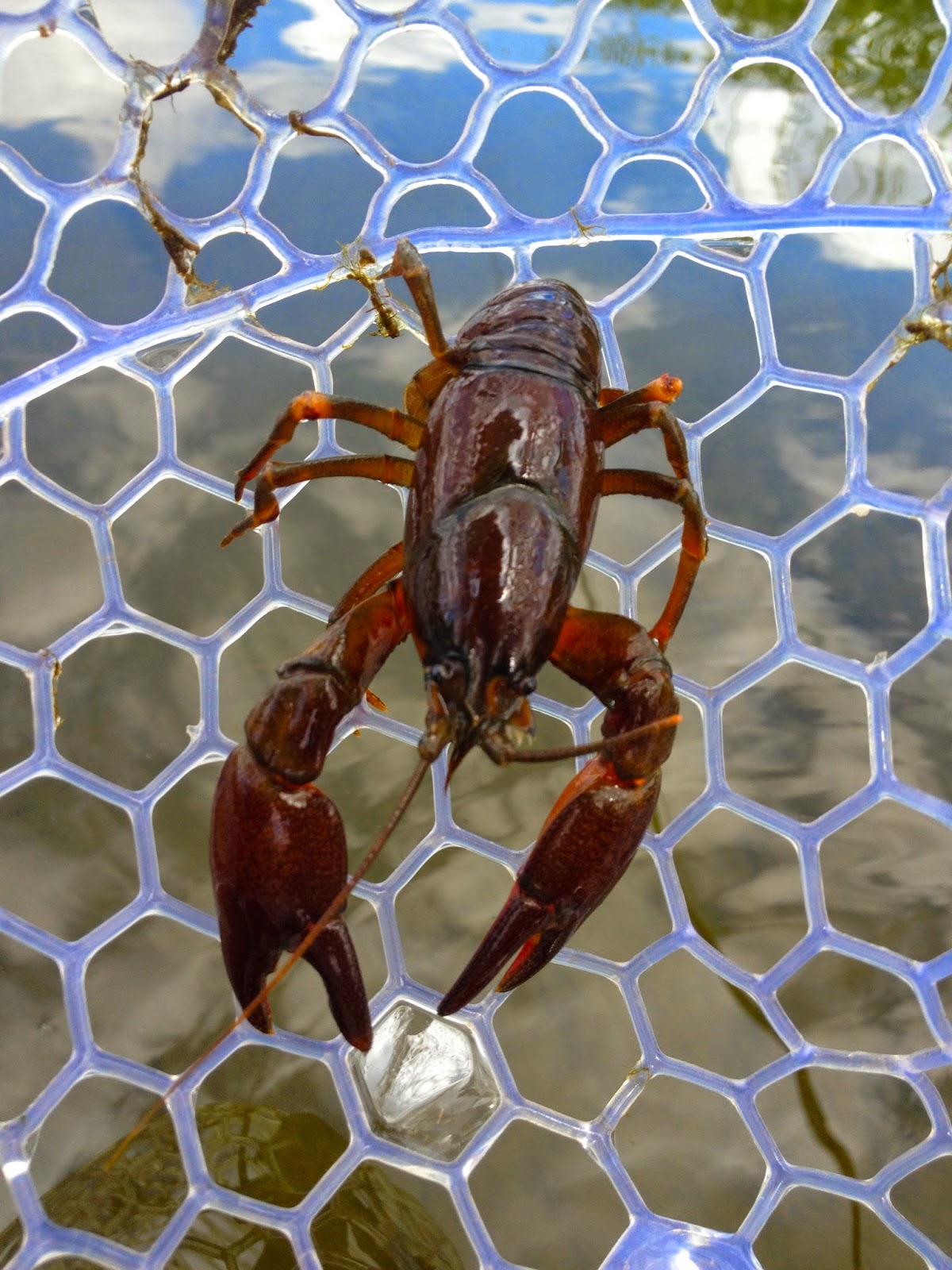 The crawdad was noticeably unhappy with us catching it, so we let it go, and went back to fishing.  Damsel flies were buzzing around, so I tied one on my line, along with my dad’s.
“Finally, some color.” My dad said, happy with the fly selection.  The fish were happy with it too, because on a nice cast near the bank, one ate it! 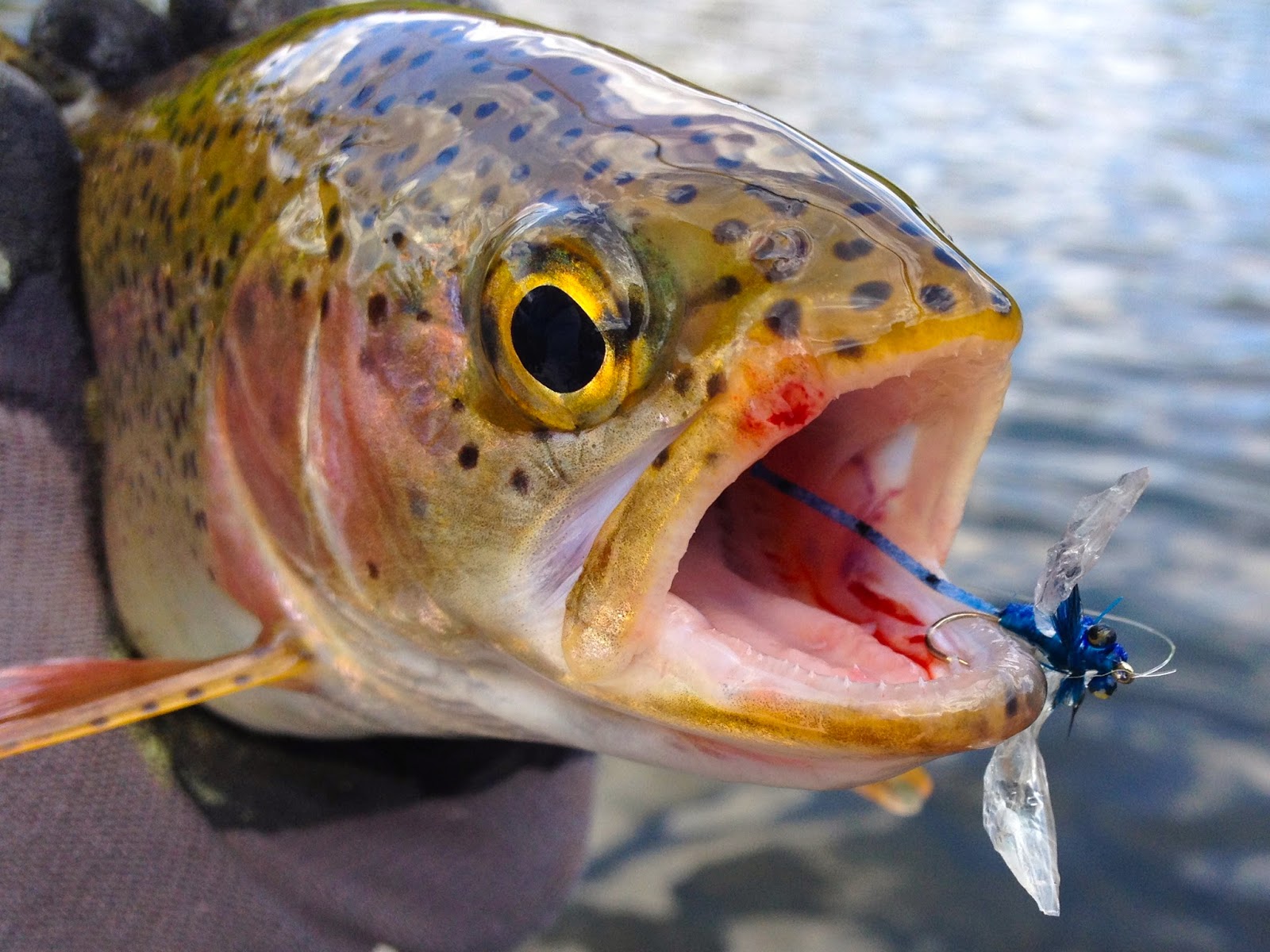 “See, we just needed some color in our flies.” My dad said, after bringing in his fish.
“Sure, Dad.” I said, just as another fish rose.
“Okay, it’s your turn.” My dad said, reeling in his line.
“No, Dad.  Go ahead and get that fish that just rose.” He pulled out some line and casted over where we saw the fish.  The fly hit the water gently, and a sizable mouth came up and ate the fly.
“Set it!” I said excitedly, recognizing a bigger trout. My dad set the hook a little late, and missed the fish.
“You better get this one.” He suggested, but I refused, giving my dad another shot.  He placed the fly out just the same as before, and the fish took again!  The hook set was better this time, but still no fish.
“I want to see you try.” My dad suggested, and so I got into position.  The fish had moved upstream a bit, so we got a little closer before I made my cast.  My blue damsel hit the water, and the fish hit fast!
“You got him!” My dad yelled, as my rod danced with a fish.
“This is a nice sized fish for this river.” I said, netting it and snapping this picture. 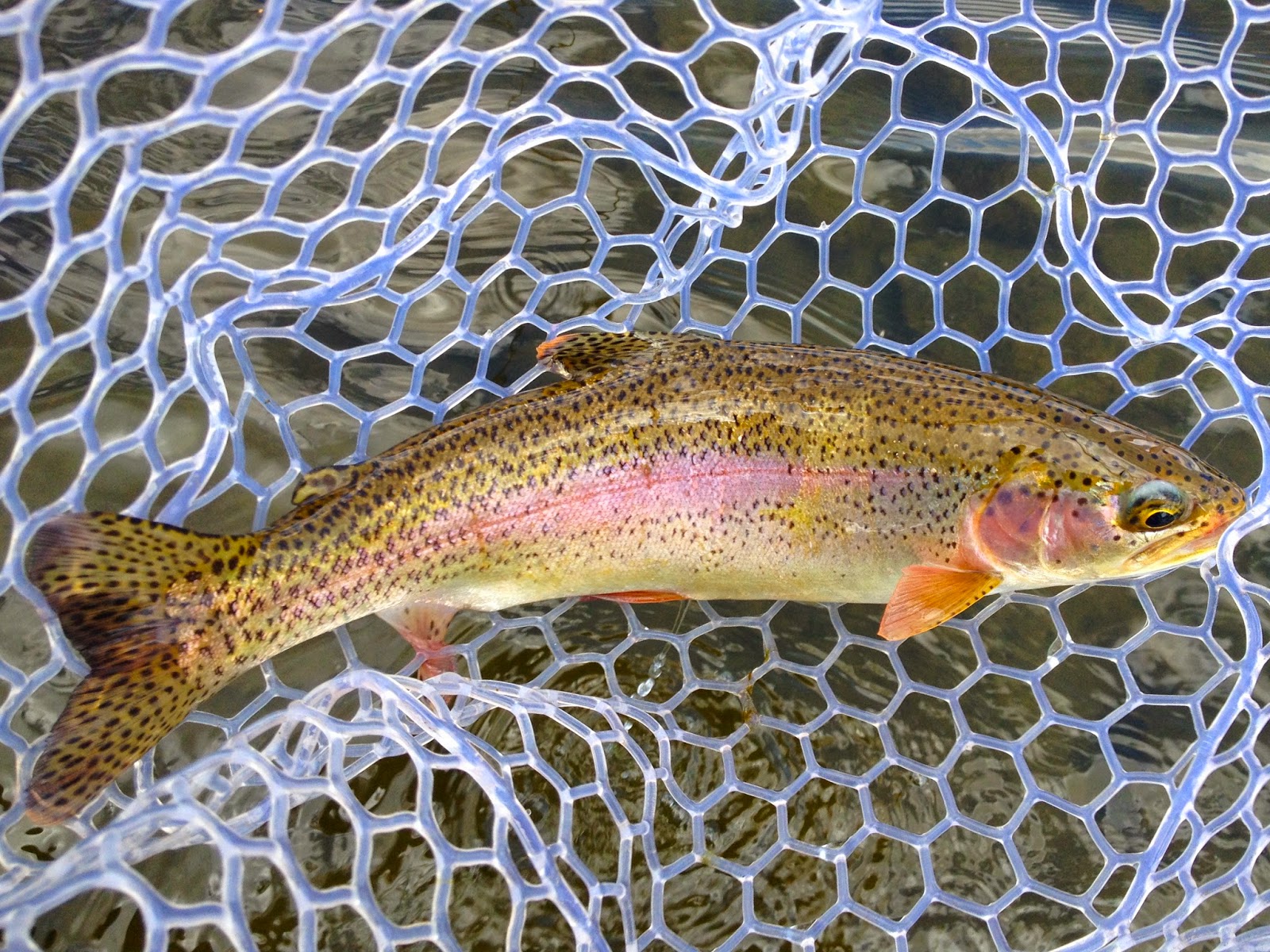 The fish bolted off to the nearest undercut bank, and we noticed that the time was flying by.
“It’s almost time to get going.” I said, “So we better start heading back.”
“Do you think we have time to fish below the bridge?” My dad asked, as we walked downstream.
“Yeah, let’s check it out.” I replied, and off we went. 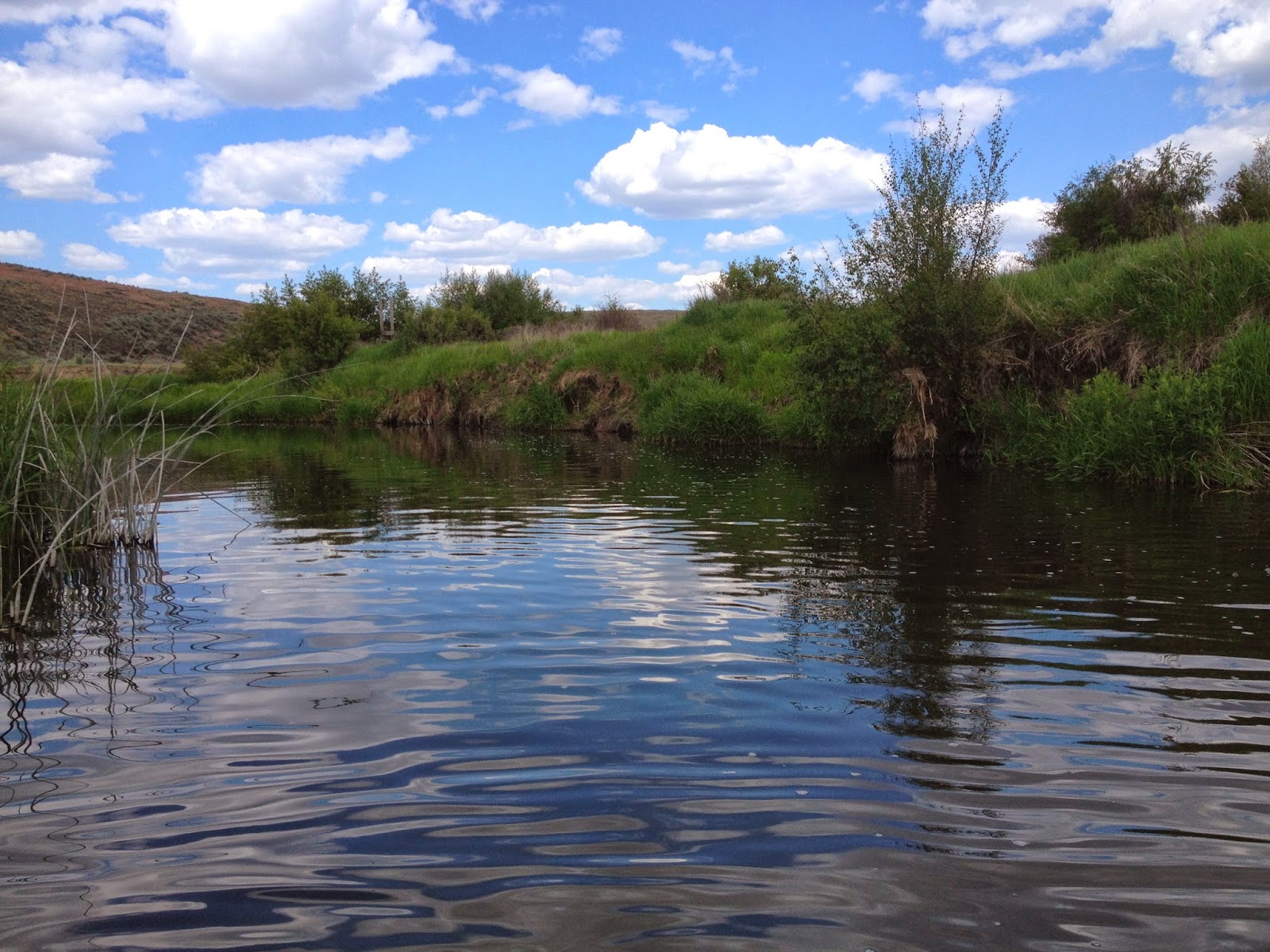 We reached some fishable water and flicked out our flies.  I like fishing upstream so that I can sneak up on the fish, but we were lacking time, so downstream fishing it was. The little fish that took our flies were hard to hook, but on one of his last casts, my dad ended up hooking this little keychain of a fish, ending a fun day at Crab Creek. 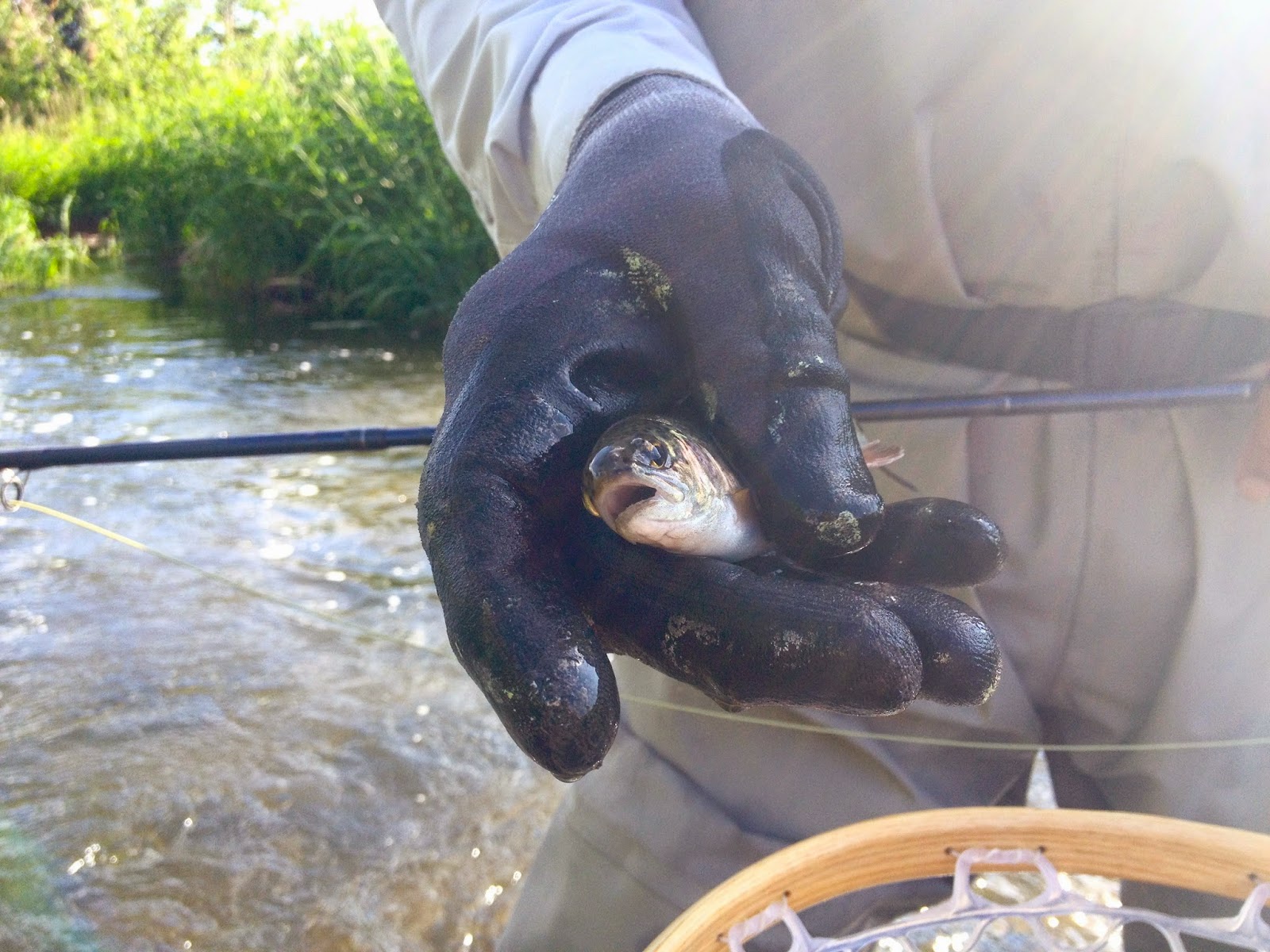 3 thoughts on “Back Home Day 2: Fishing for Keychains”