Skip to content
Having lived in Moses Lake for 23 years, it seems funny that there are all these lakes around that I didn’t even know existed.  Stan Coffin Lake is part of the Quincy lake region just outside of Quincy, Washington.  The lake is known for being a bass fishery, and it was recommended that I check it out; after all, it is popper season and I had tied over twenty for the occasion. 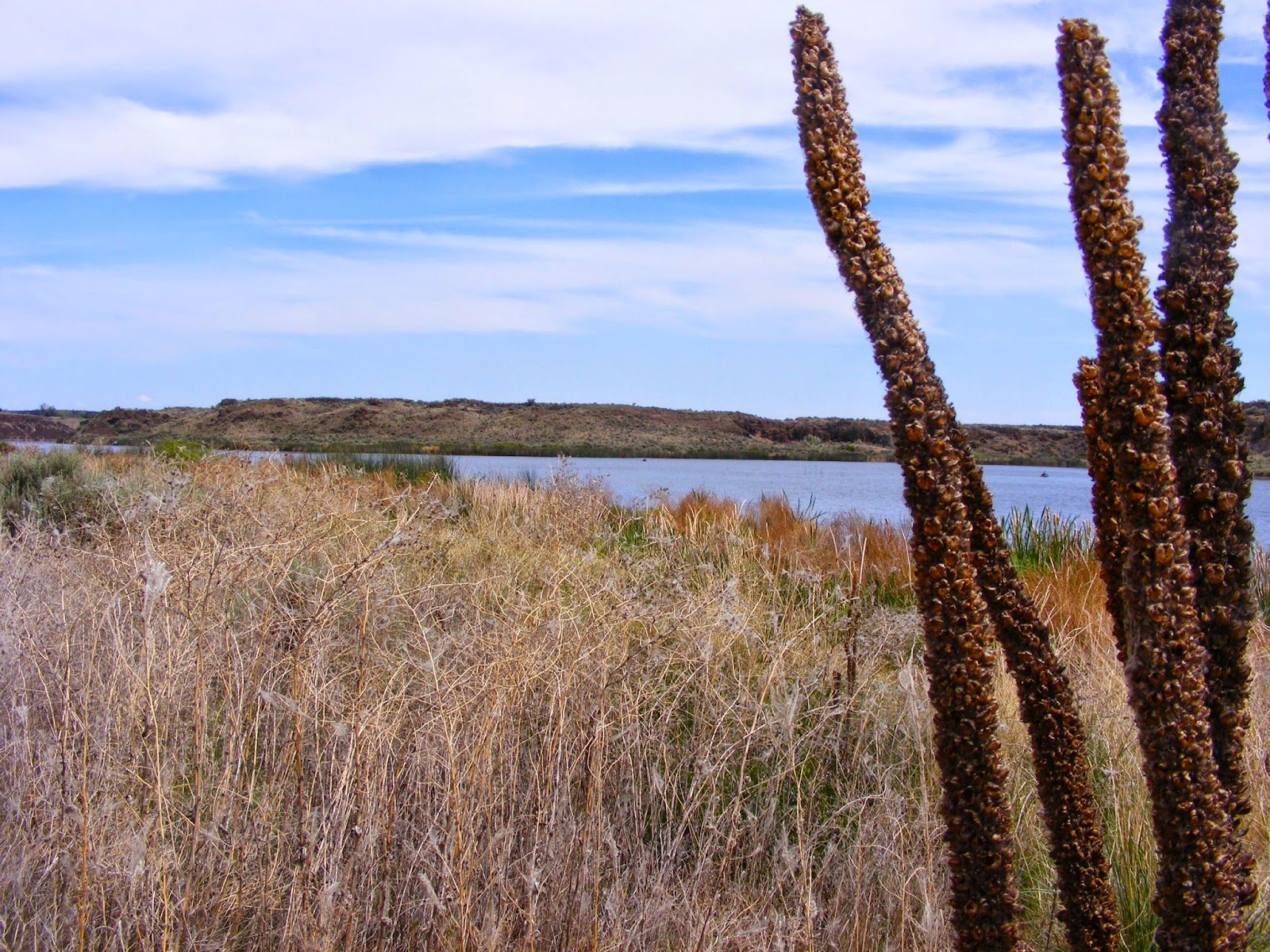 An old  buddy, Jimmy Heimark, better known as little Jimmy Heimark,  had recently picked up the sport of fly fishing.  He contacted me to see if we could wet-a-line sometime, so I invited him to fish Stan Coffin Lake with my dad and I.  I hadn’t seen him in over ten years, so when he showed up I was surprised to see that the once four foot little Jimmy Heimark was now taller than me.
“Well I guess I can’t call you little Jimmy Heimark anymore.” I looked up and said to him.
“Nope!” He said with a smile, and we gathered all of our gear and headed out to the lake. I was sure to equip everyone with a popper before we hit the water. Jimmy was the first one out to fish; I synched up the flippers for my dad, and saw him off before I got in the water. 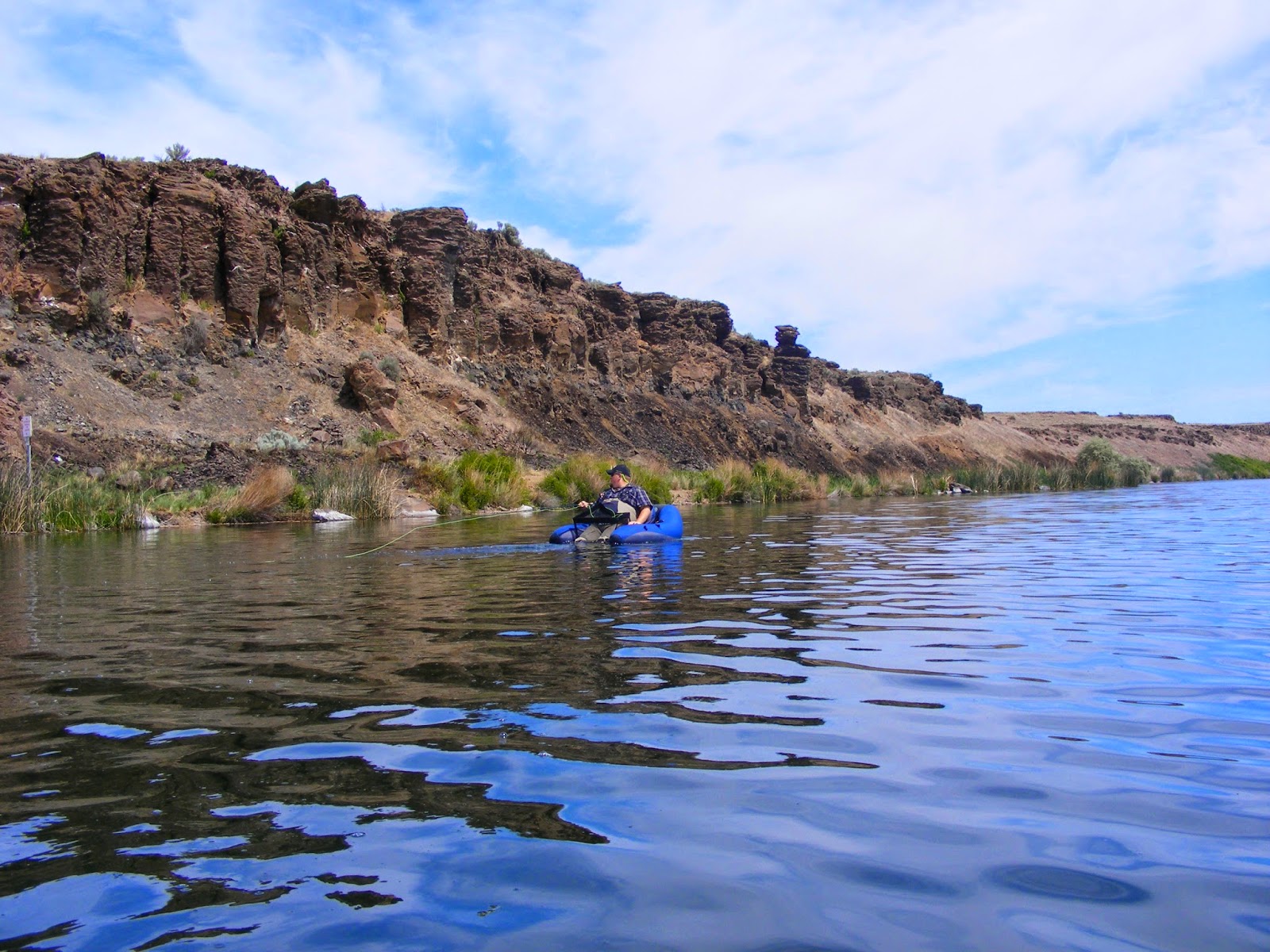 The lake was clear as a bell, and you could see tons of bluegill swimming about.  I casted my popper and was popping it back when a bass slammed it. I set the hook in a flash and the bass exploded into action. The bass put on quite a show, jumping and thrashing, while I applied the torque needed to bring it in. 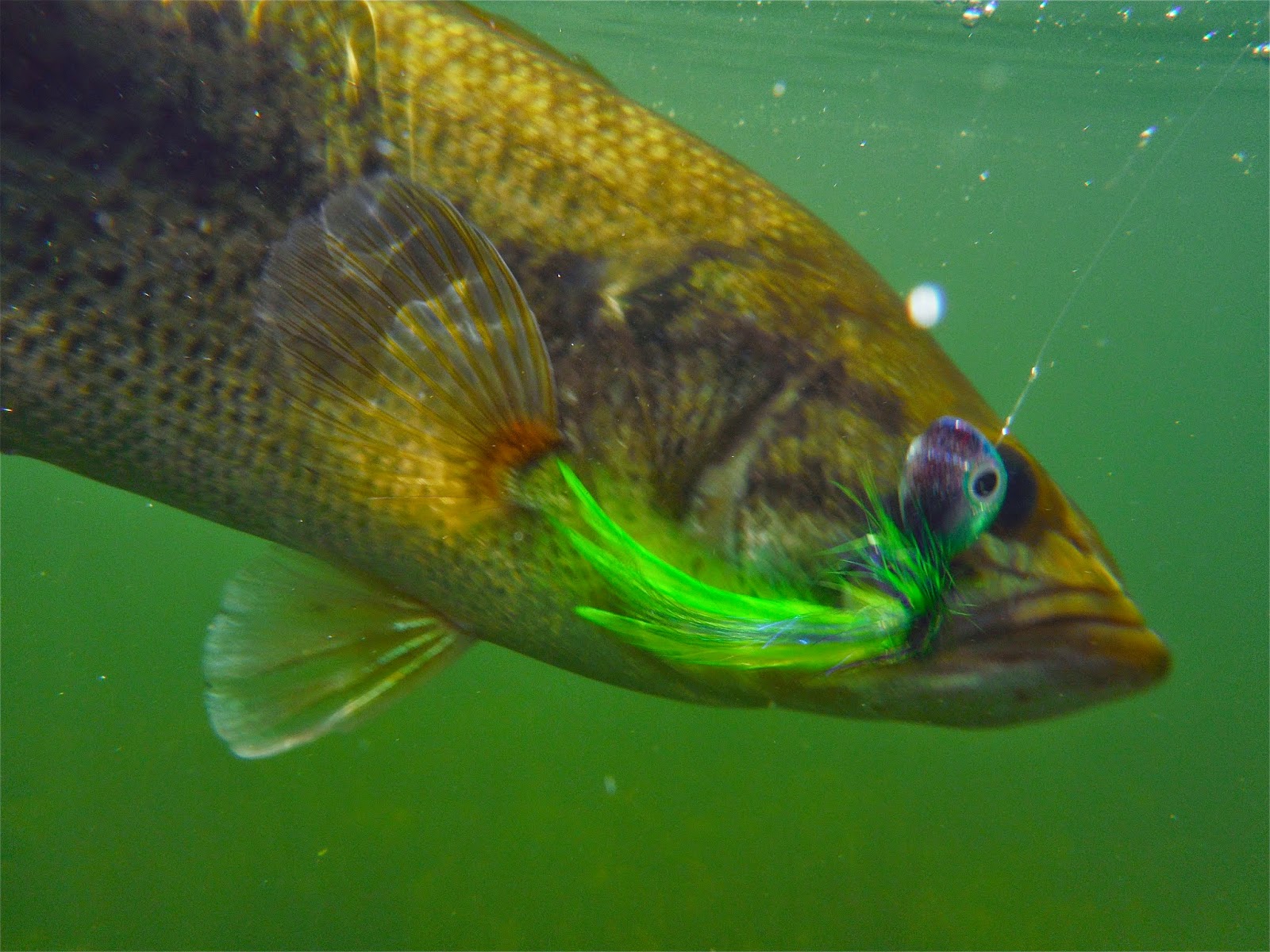 This is going to be a good day, I thought, as my bass swam away. With the water being so clear, I  watched the bass swim down into the weeds seeking shelter.
“Dad, have you caught one yet?” I asked over the walkie-talkie.
“Not yet.” He replied, “But I can see fish all around me.”
“If you want to catch one of them, I can tie on a smaller fly for you.” I asked.
“No. I want a bass.” He said before he started fishing again. 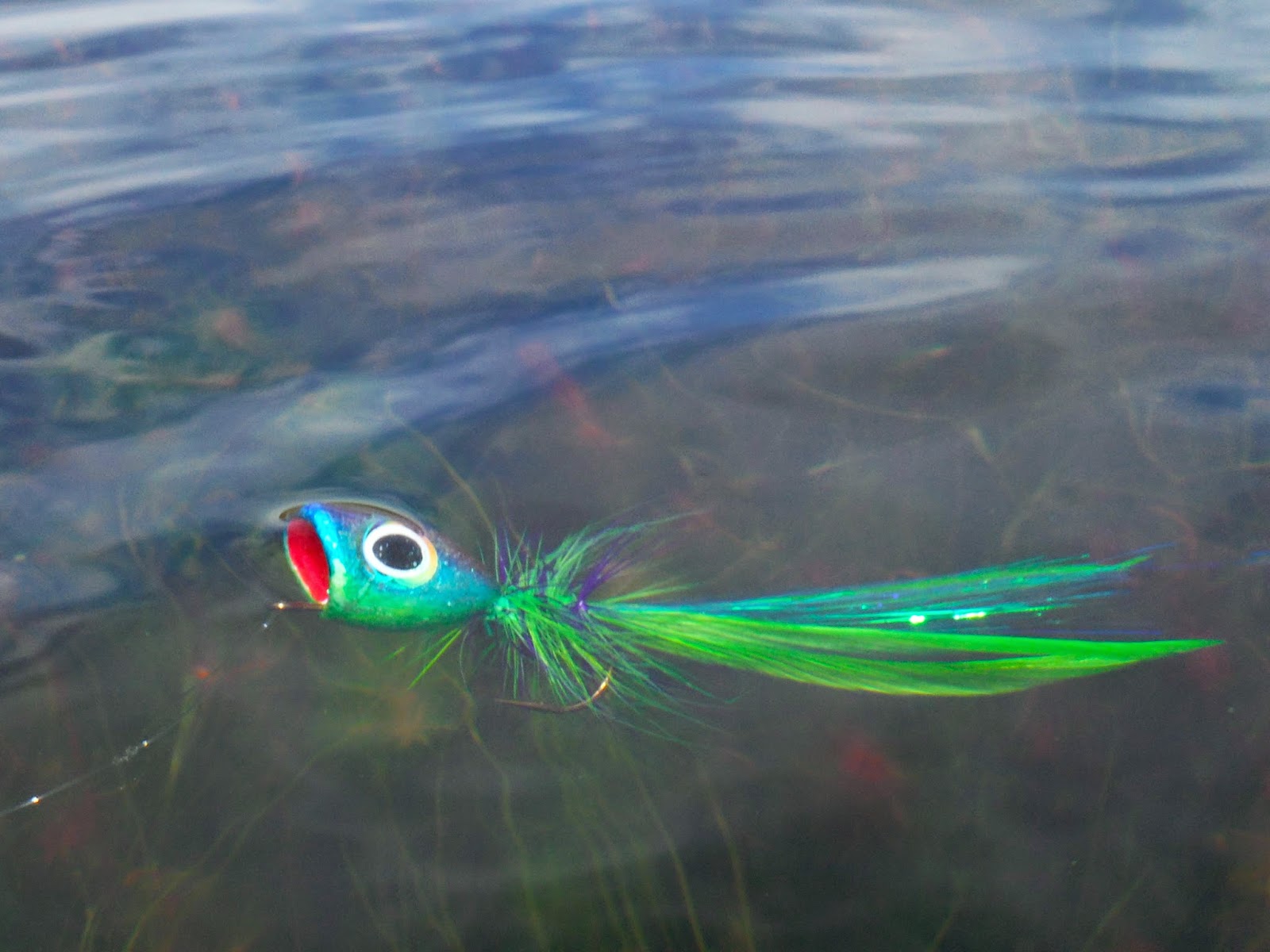 “Jimmy, how are you doing?” I said into the radio, but got no reply. I looked over to the last place I saw Jimmy in his float tube, and heard a faint call.
“I’ve got one on!” He yelled over us.  My dad and I looked over and watched as a bass was jumping out of the water around Jimmy’s float tube.  Jimmy kept his rod high as he brought in his fish and held it up for us to see.  Sadly, over 100 yards away, it was hard to get a good look at his fish. 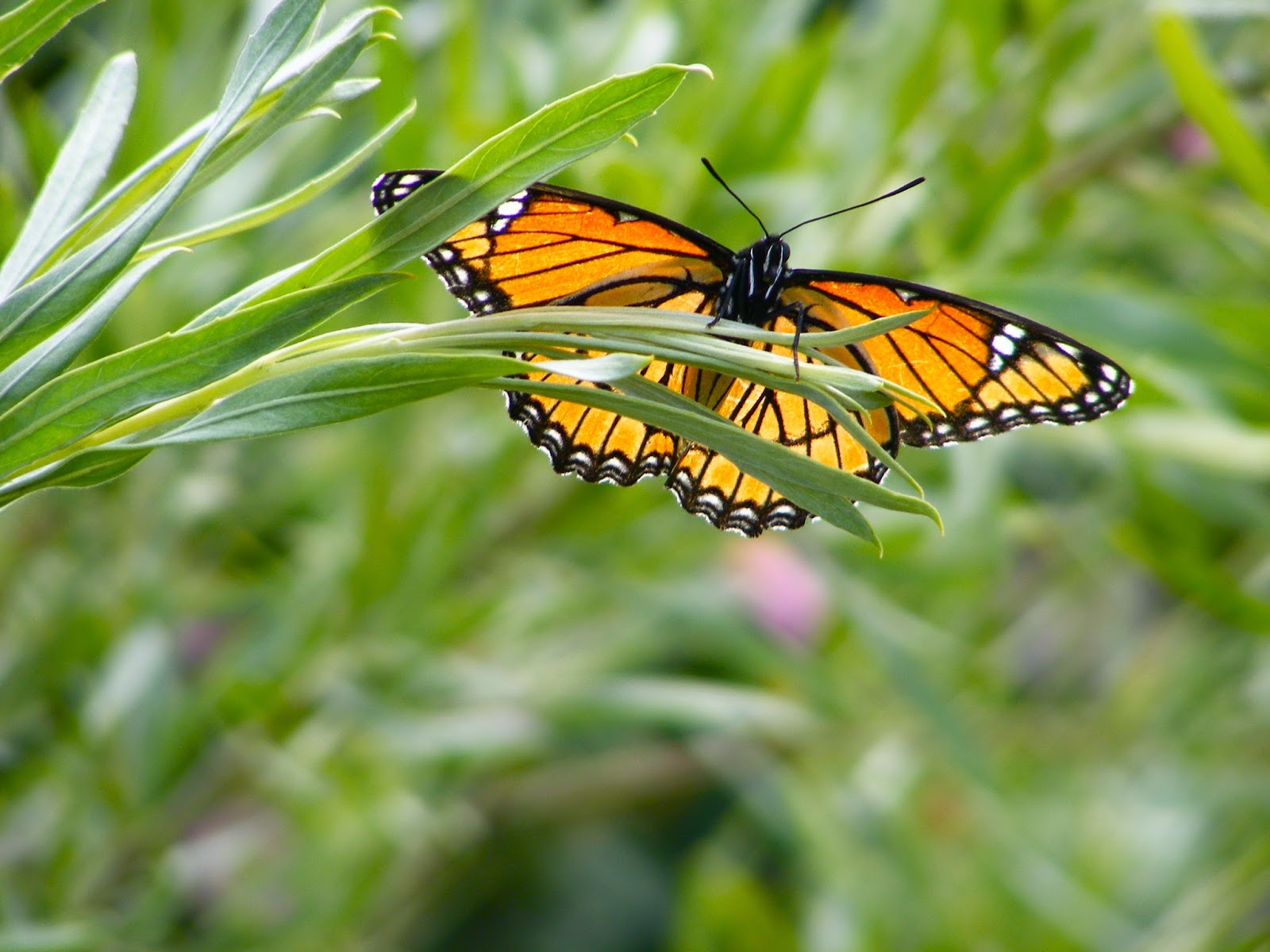 Popper fishing had significantly dwindled, especially after I kicked to the far side of the lake.  There I saw no bass or bluegill roaming about.  The time it took to kick over there seemed pointless, so I started to kick back. 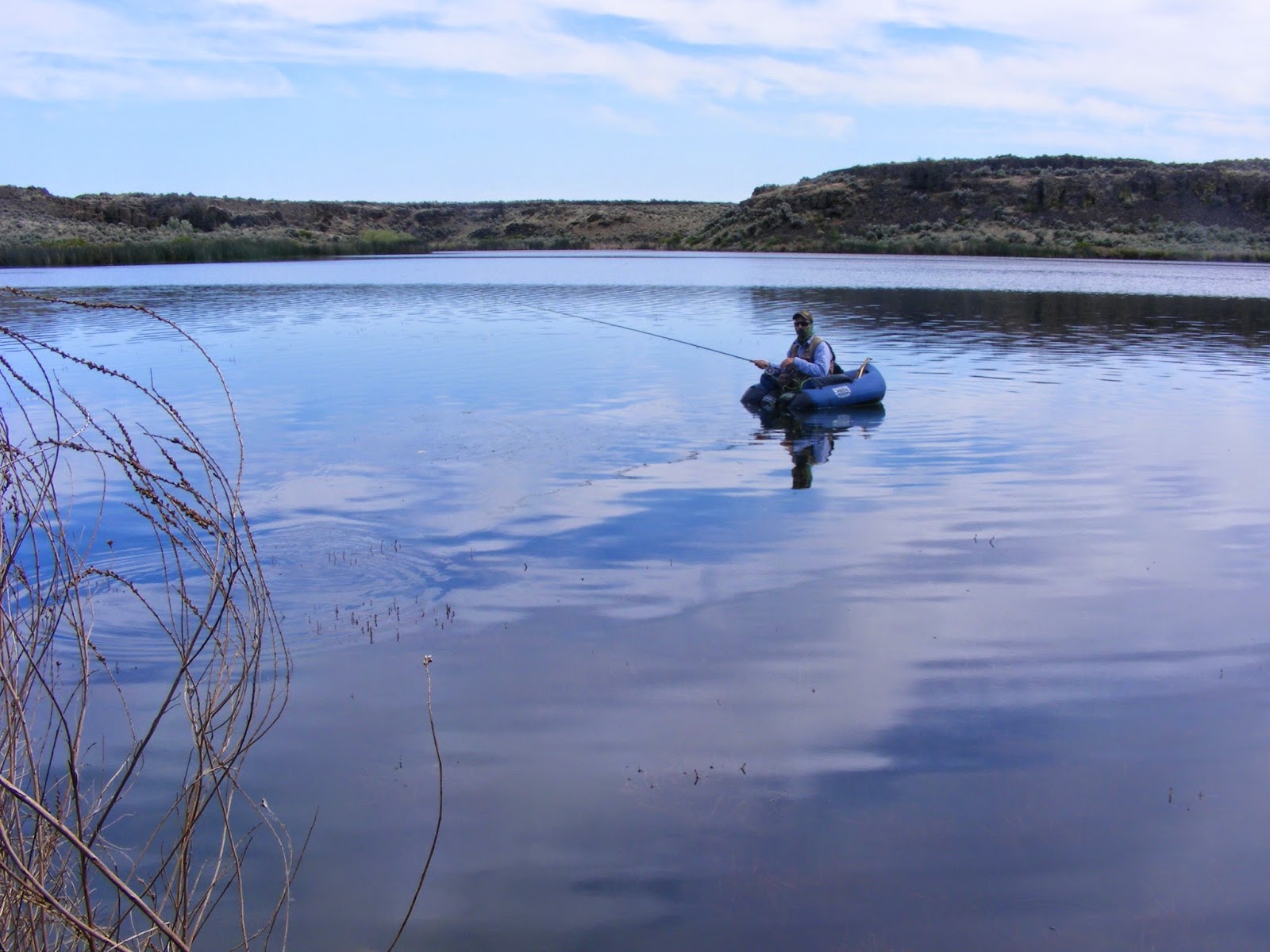 The wind had blown my dad to a small cove, where he got out and walked back to the van.
“Did you get anything?” I asked through the walkie-talkie.
“I had one on, but it got away.” He replied.
“Hey!” My dad said excitedly, “Look over there; Jimmy’s got one!”  I kicked my float tube around, pointing at Jimmy, and watched as he fought another fish.  Once again, Jimmy was too far away to get a good look at his bass, so I spoke into the walkie-talkie.
“Nice bass there, Jimmy!  It looks like a fighter.”
The faint echo of Jimmy’s voice came from across the lake, “It is!” 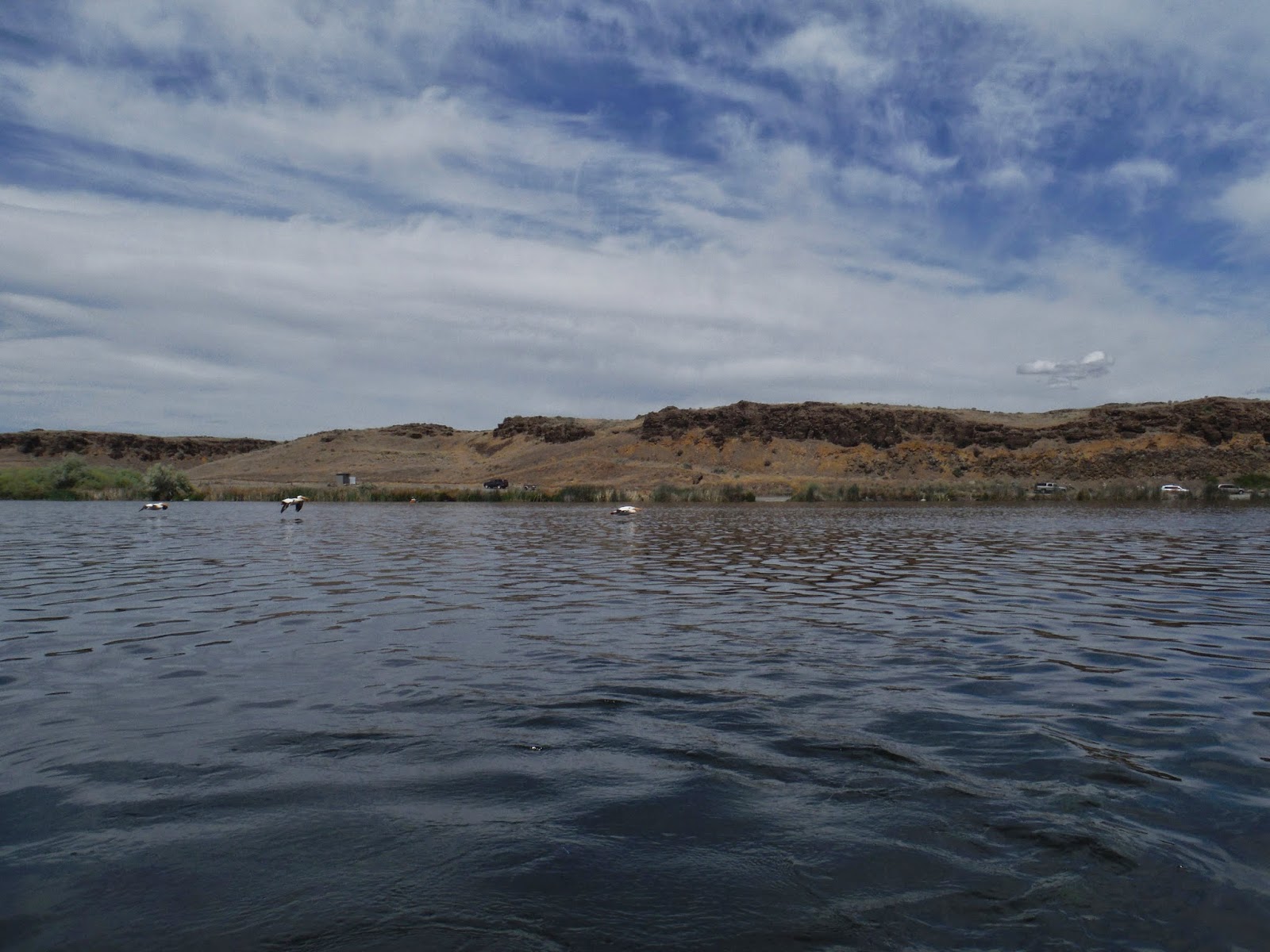 I was now close enough to the van where I didn’t need the walkie-talkie to speak to my dad.
“I see some fish over here!” He yelled out to me, pointing into the water.
“Bass or bluegill?” I asked.
“They are little ones.” He said, meaning bluegill. I switched my fly to a demon-eyed damsel, and threw it over to the bluegill.  It was nice to feel a fish on, even if it was only five inches, at best.
I released the little fish and watched it swim away, when a bass caught my eye.  I stayed as sill as I could, tying on a fly that would get down to it.  All nice and secure, I dropped the meat whistle fly down near the bass.  I watched the whole thing happen.  The meat whistle sank quickly and I gave it a twitch, bringing it to life.  The bass kicked over slowly with its eye on the meat whistle, and sucked it in.  Wham!  I set the hook, and brought in a nice bass. 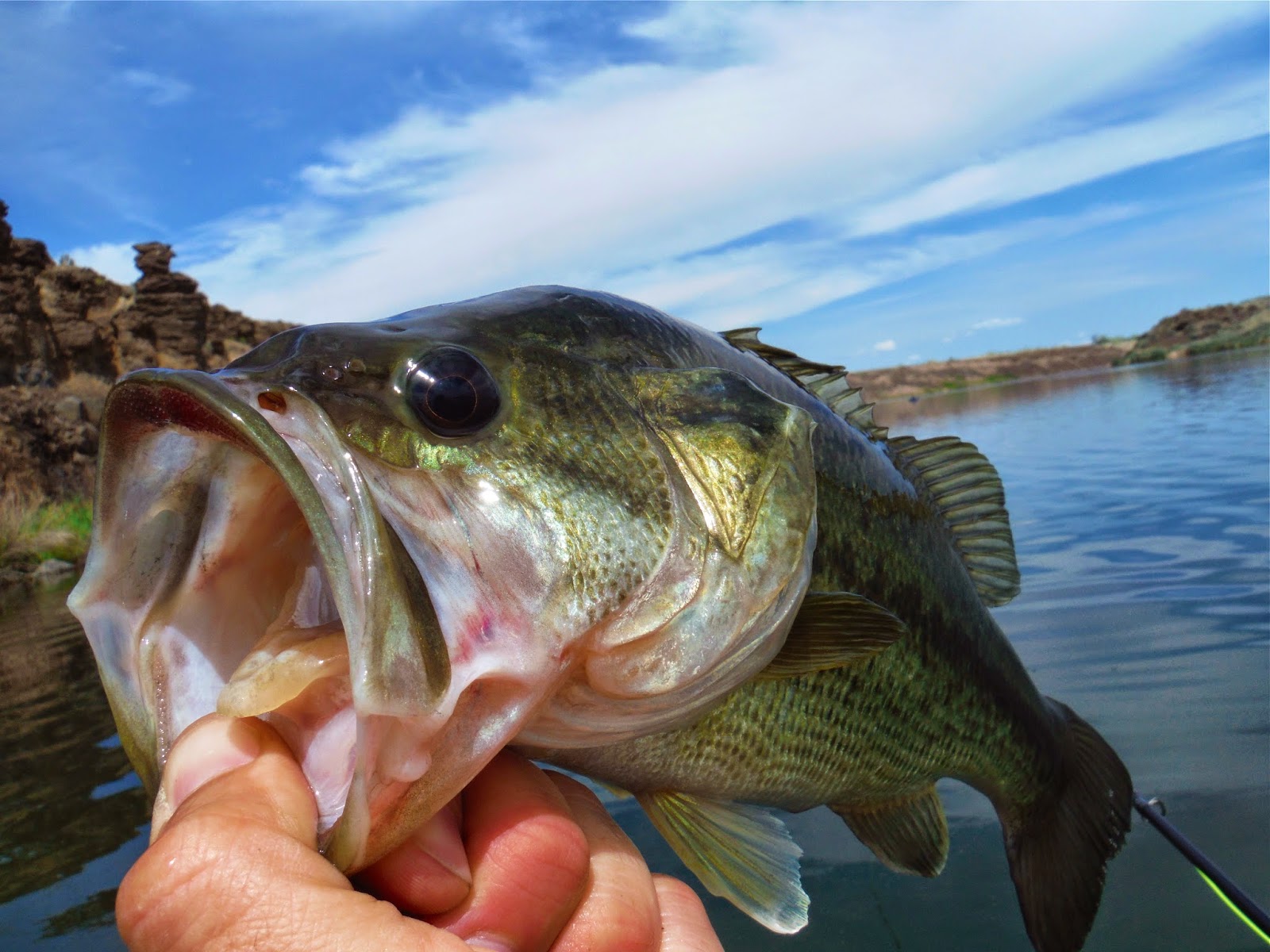 Even after that last bass, the overall fishing hadn’t been good, so we all packed it in, and headed for Rocky Ford Creek. 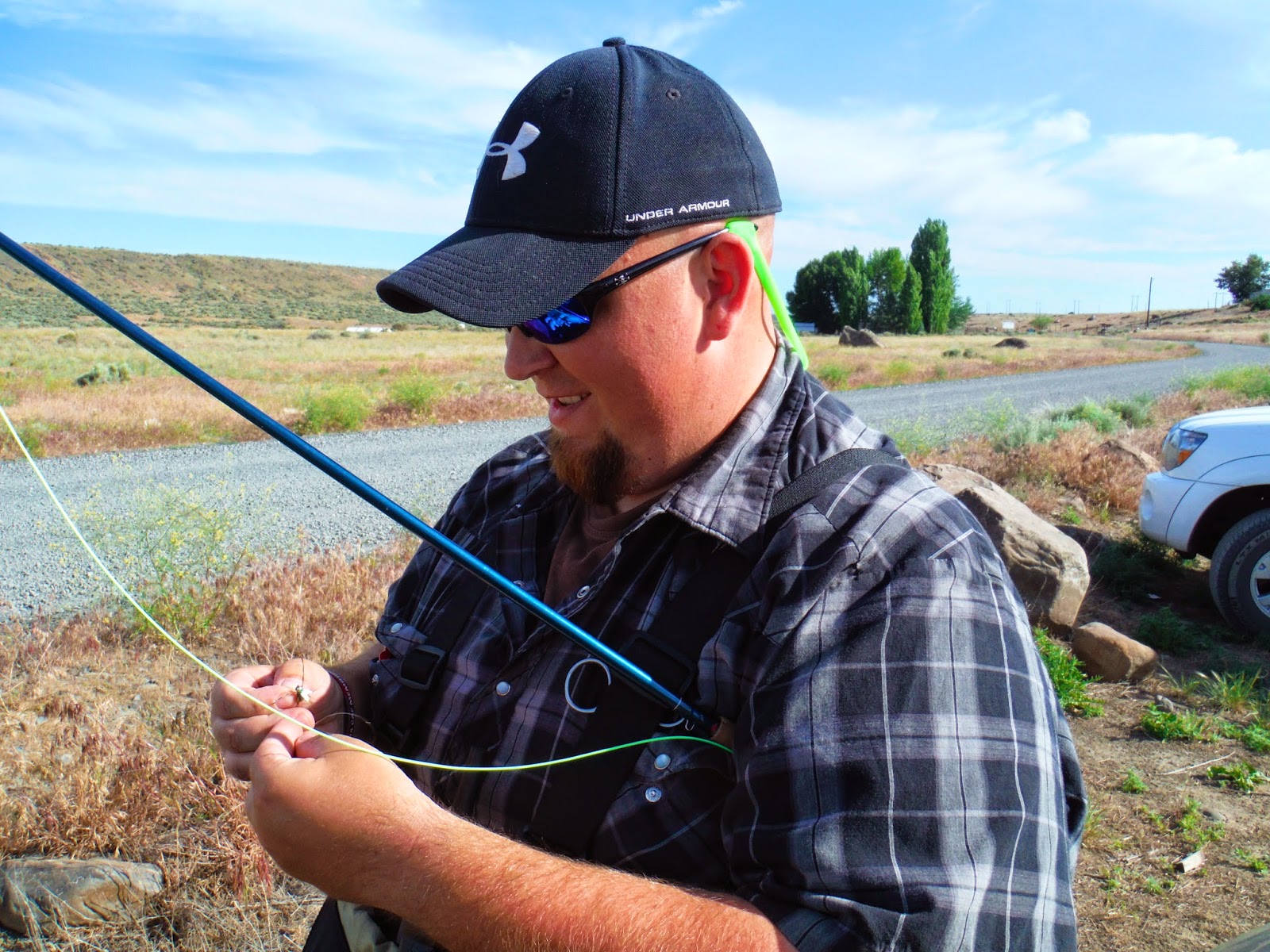 The first sight of the creek always makes me happy, and it seems like I can never put my rod together fast enough to start fishing. The glassy, smooth flow of the creek is always inviting, and the excitement of seeing huge fish near the bank is something that has to be experienced to understand. 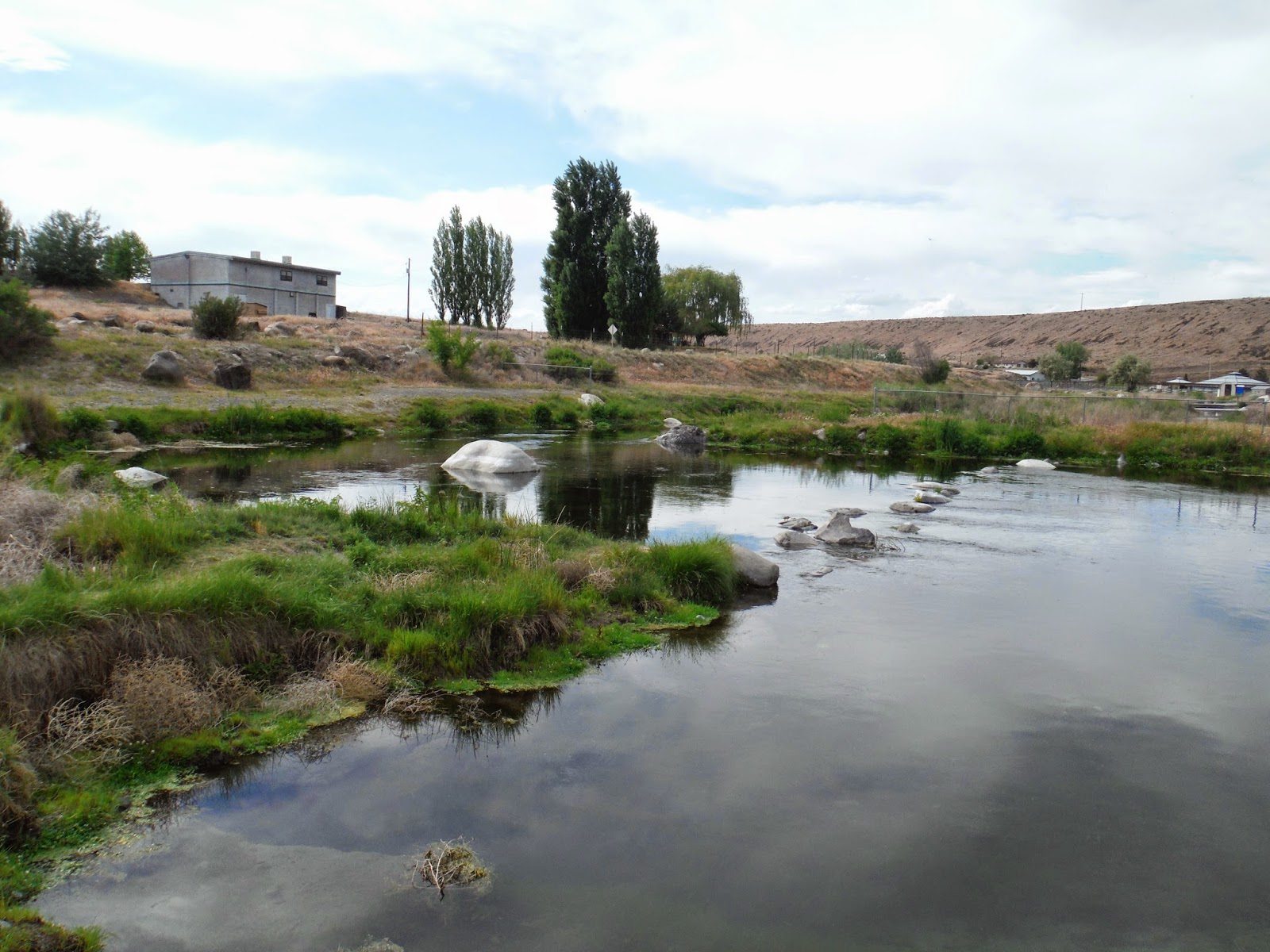 We all rigged up with streamers and hit the water at different spots.  My dad went to the bridge, Jimmy fished from the board walk, and I stayed on the grassy bank to try my luck. 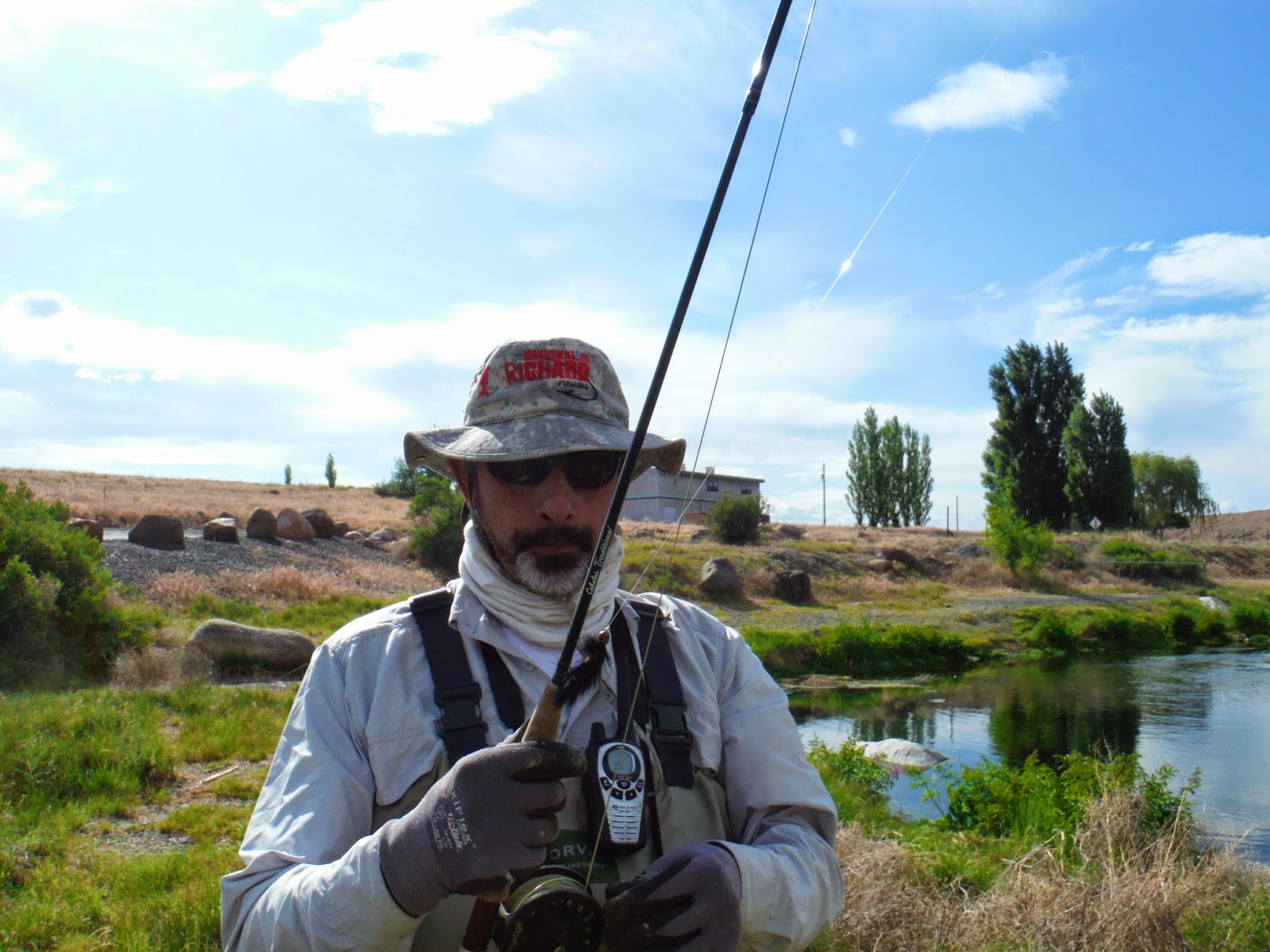 I sent my streamer rocketing to the other side of the creek in many different spots in search of a fish, but none would have it.  I then extended my 9-foot 1X leader down to 5.5X tippet, making it over 17 feet long, and at the end of my crudely fashioned leader was a pico spider.  The 9 1/2 foot 6-weight Helios 2 sent the pico spider 80 feet out with a simple flick, and it would have gone further if the line hadn’t wrapped around my foot.  I reached down, unhooking the line around by boot, and when I looked back up I saw a distinct ring on the water, as if a fish had just rose.  I quickly put my fly line in order, and set the hook.  Sure enough, a fish was on!  It violently shook its big head, but the fight was short lived.  One more violent thrash and my pico came flying out of the water. 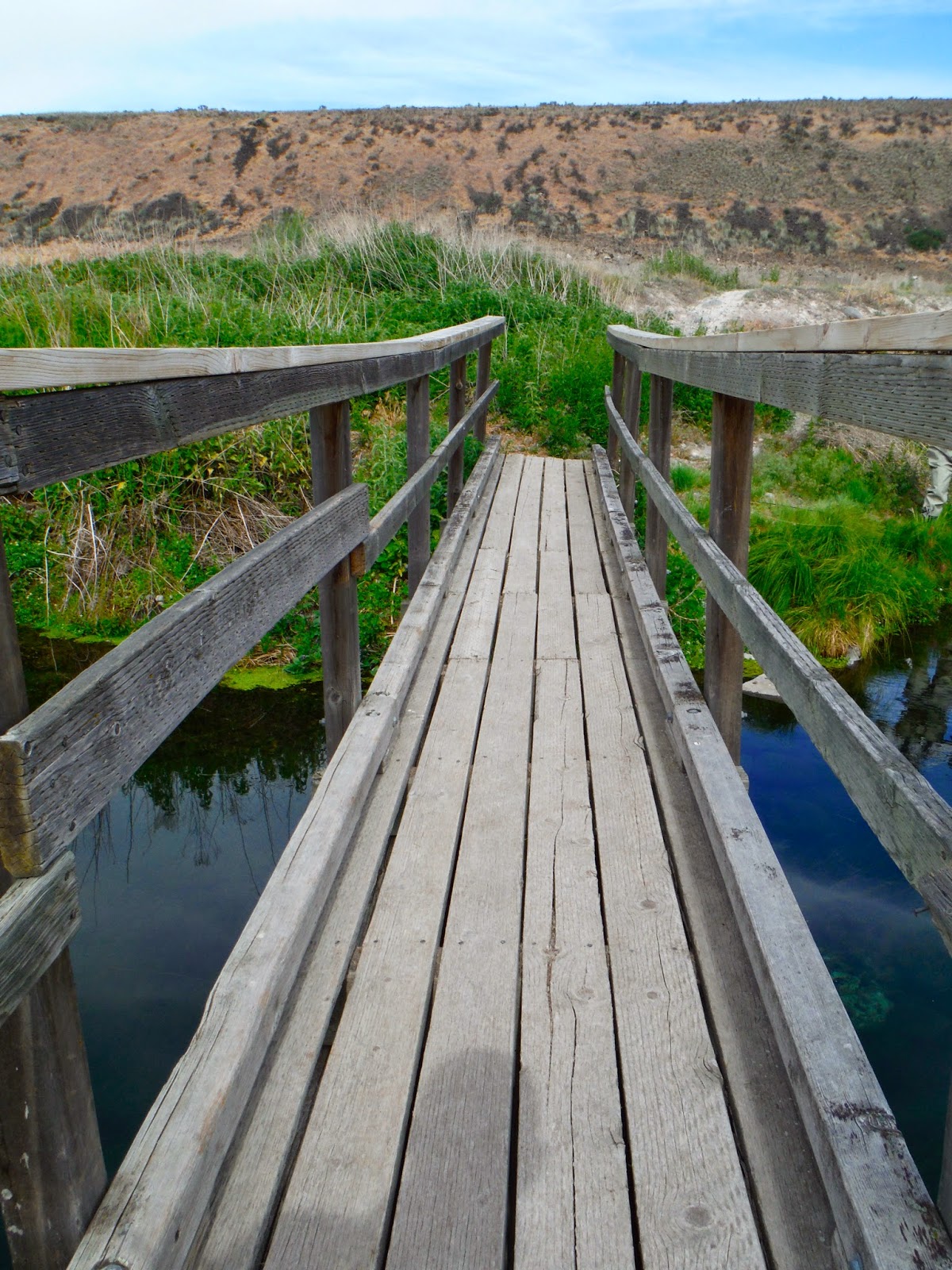 “Did you have a fish on?” My dad asked, watching from the bridge.
“Yeah, but it got away.” I replied.  As I looked over at my dad, I noticed another fish sitting under the bridge and close to the bank. I flicked out my fly line, and the pico hit the water with a splat.  In half a second, the once still fish sprang to life and took my pico with enough force to send itself rocketing out of the water!
“Woah!” I yelled, as I set the hook. The fish danced under the water, trying the escape, but this time I had a solid hook set.  My dad came running to see my fish, and after I brought the fish into my net, I handed my dad the camera.  I held up the fish, and it kicked hard, causing me to loose grip of it.  At that moment, my dad took a shot, leaving me with this picture that is far from a hero shot. 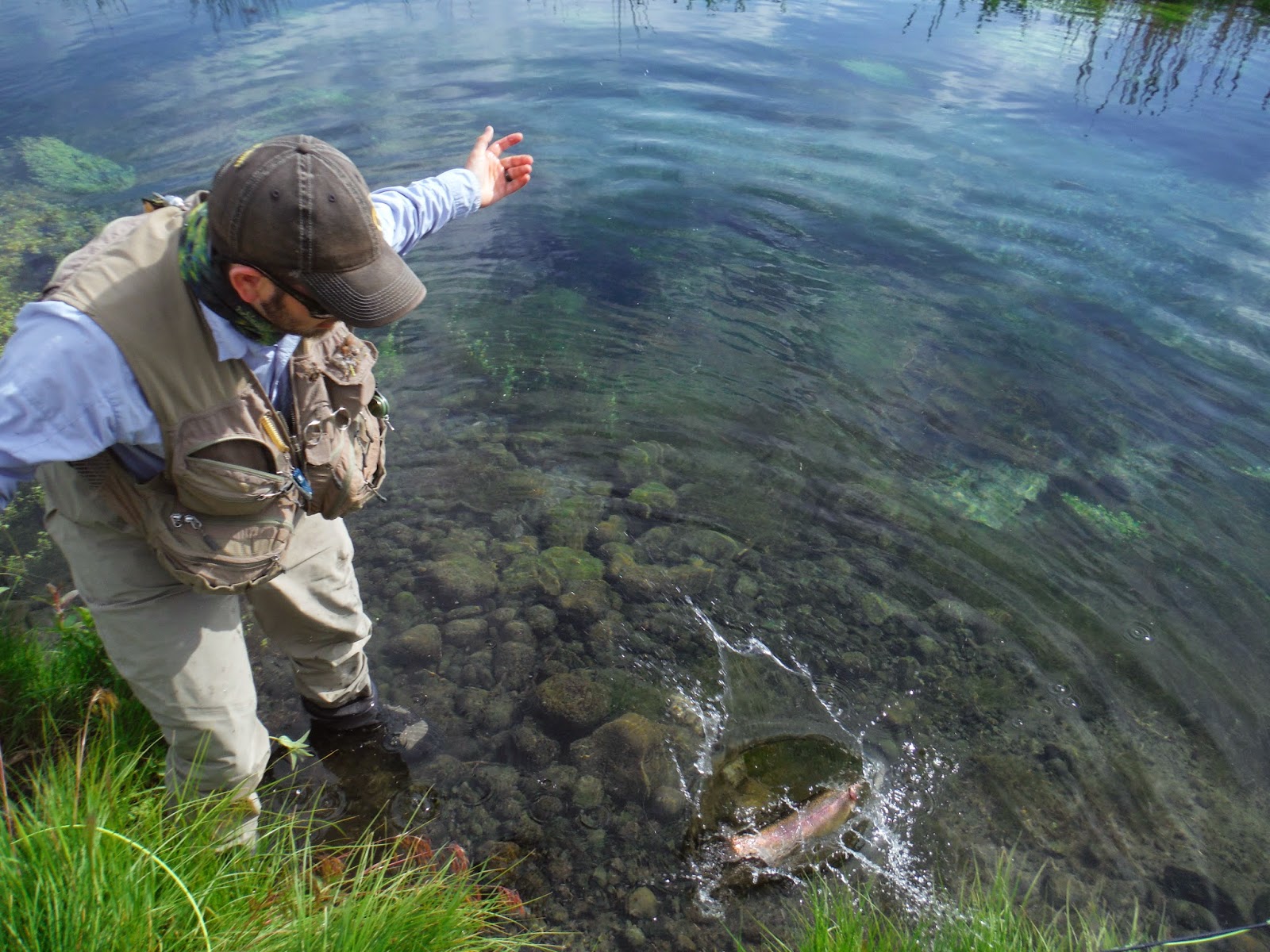 “Ah!” Was the sound that came from my dad, as the fish flopped away.
“Oh well…” I said, as I gathered my composure, and got ready to make another cast.  This time I was standing on the bridge looking down stream at a fish.  I was two for two on the pico; perhaps I could go for a third.
“I saw that fish eating something over there.” My dad said, pointing at a smaller fish.
“Okay.” I said, and presented the pico.  The fish bolted over at the pico spider and, less than an inch away, the fish didn’t take.
“It refused it.” I said, but I had spoke too soon.  The fish turned 180º back at the pico.
“There he goes, there he goes, THERE HE GOES!” My dad yelled, as the fish hit the pico, and I set the hook!  Laughter erupted as the fish fought to get free.  I was able to bring it in quickly, and this time, I wasn’t going to let it flop away. 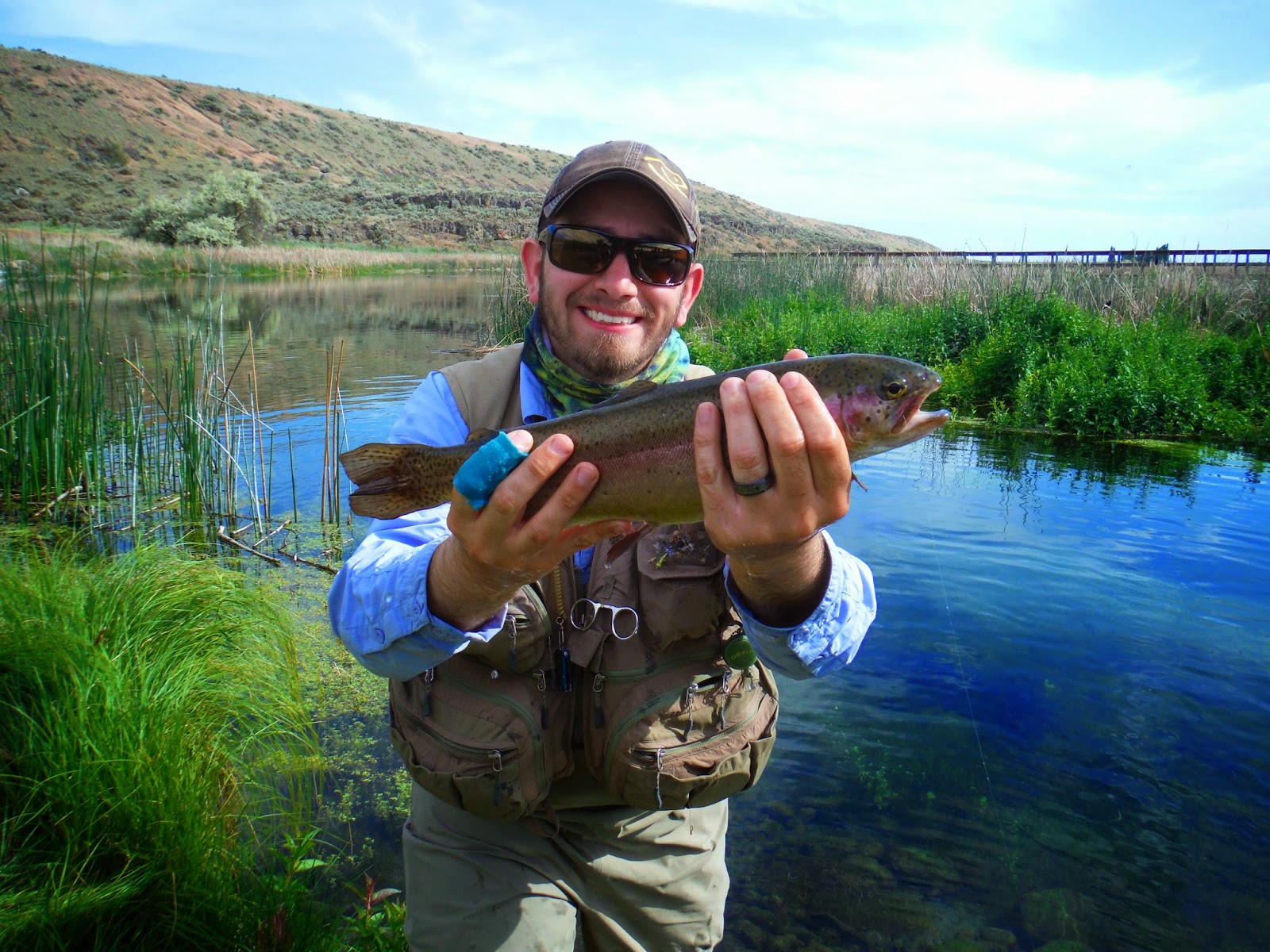 Time flew by at Rocky Ford, and we ended up packing up shortly after that fish.  Jimmy had never fished this part of the creek, and reassured us he would be back.   They both have yet to catch a fish at Rocky Ford Creek, but I’m sure their time will come shortly.