Skip to content
There is always a risk when searching out new water to fish; you never know if it’s going to be any good or not.  I believe that is why most people keep secrets about their fishing spots. They take the risk of possibly not catching anything in their adventure to seek new water.  What good is blabbing about your newly found pond or stream to an angler who is not willing to take some risks?  Believe me, when you do branch out and discover a honey hole, the last thing you will want are others blabbing about it.
Usually when I take my wife, Gracy, out fishing, we go somewhere I am familiar with, and where I feel she has good odds of catching a fish.  Today was a little different; I was taking her to a spot I had never fished. I informed her that the fishing may not be any good, and she was 100% okay with that.  For Gracy, when there is no pressure to catch a fish, that’s when she has the most fun. 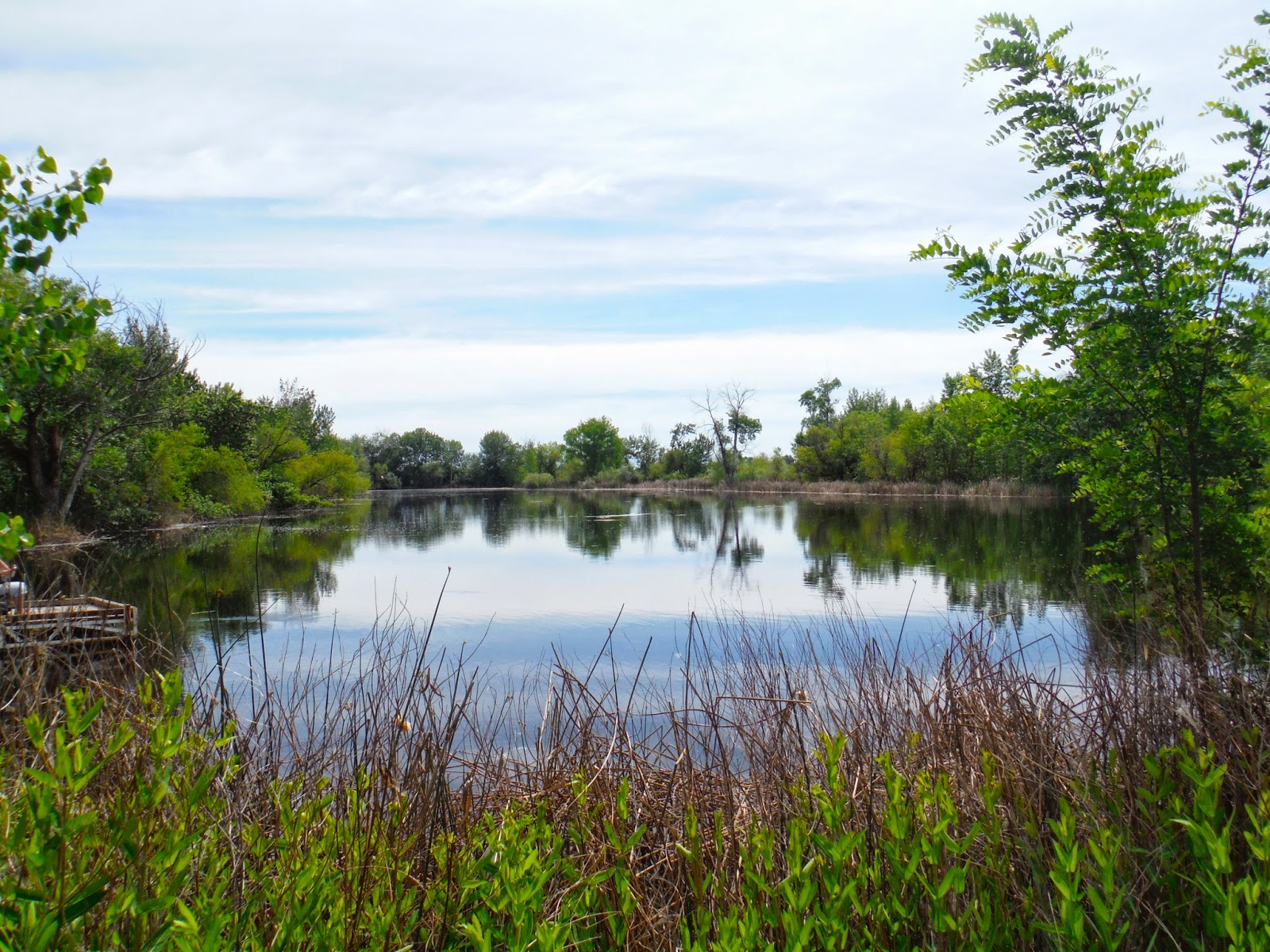 We pulled up to the pond and pumped up our float tubes to get out onto the water.  This time of year is fun, because it’s popper season and the bass can go nuts for them.  Gracy got onto her float tube first, and had the first crack at the bass. 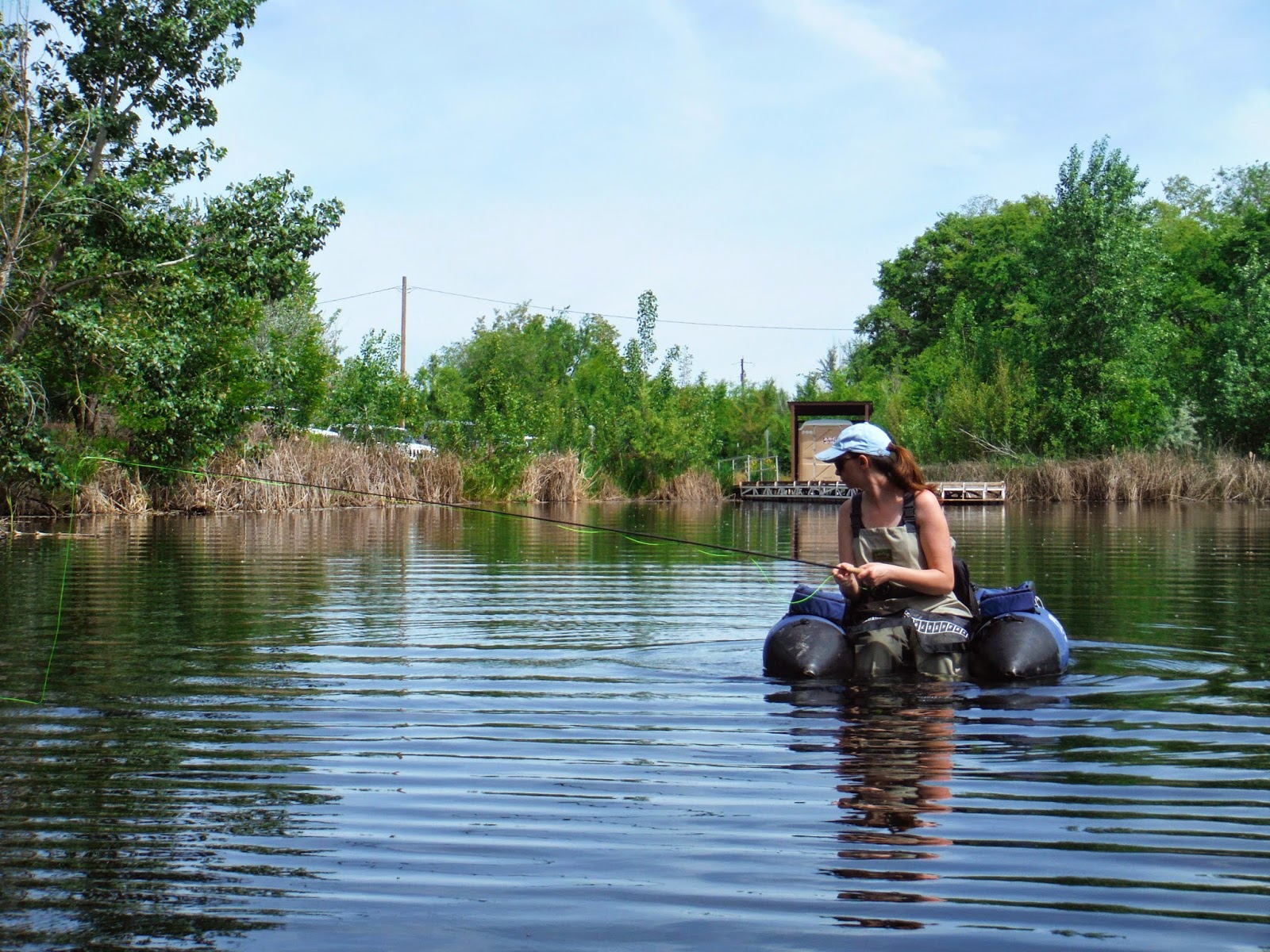 Popper fishing for bass is like dry fly fishing on steroids.  You are basically mimicking a frog plopping through the water in hope that a bass will come and attack it.  I tossed out a medium-sized popper I had tied myself, and a bass pounced!  The popper disappeared, and in a flash I set the hook!  The bass leaped out of the water trying to throw my hook, but failing at every attempt.
“You got one!” Gracy said excitedly from across the pond, “Do you want a picture?”
The bass was not a monster by any means, so it was not worth her kicking over.
“No, I’ll just take a picture of it.” I said, and held up the fish with the popper in its mouth. 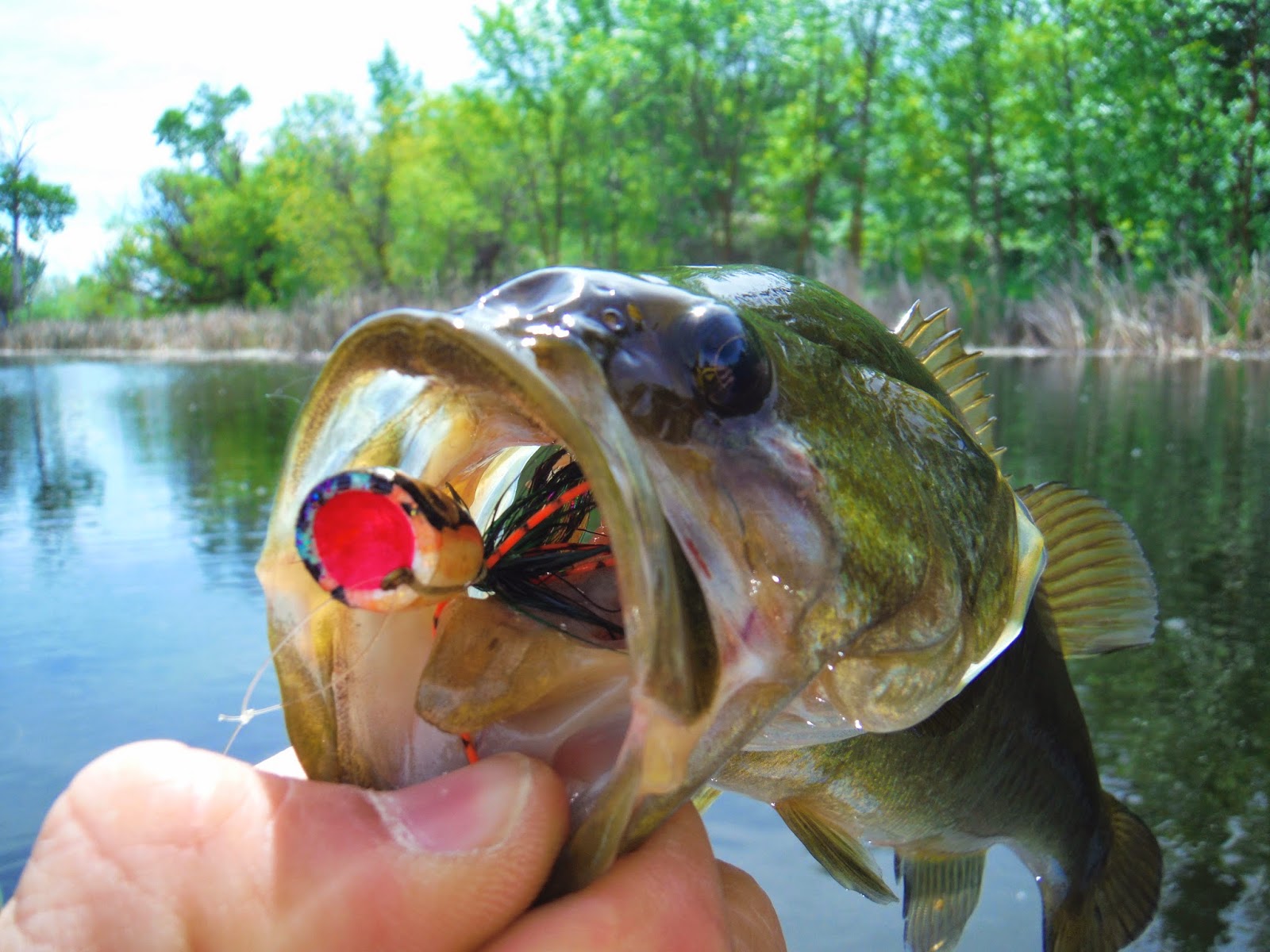 Gracy was fishing the north side of the pond, while I remained on the south side.  I threw my popper as close as I dared to the cattails, and as soon as it splat down I gave it one initial pop, then let it sit for a few seconds before I popped it again.  If there was a bass around, it usually took on the second pop.  I caught a few smaller fish before I got into this guy – which seemed to be the standard for this pond. 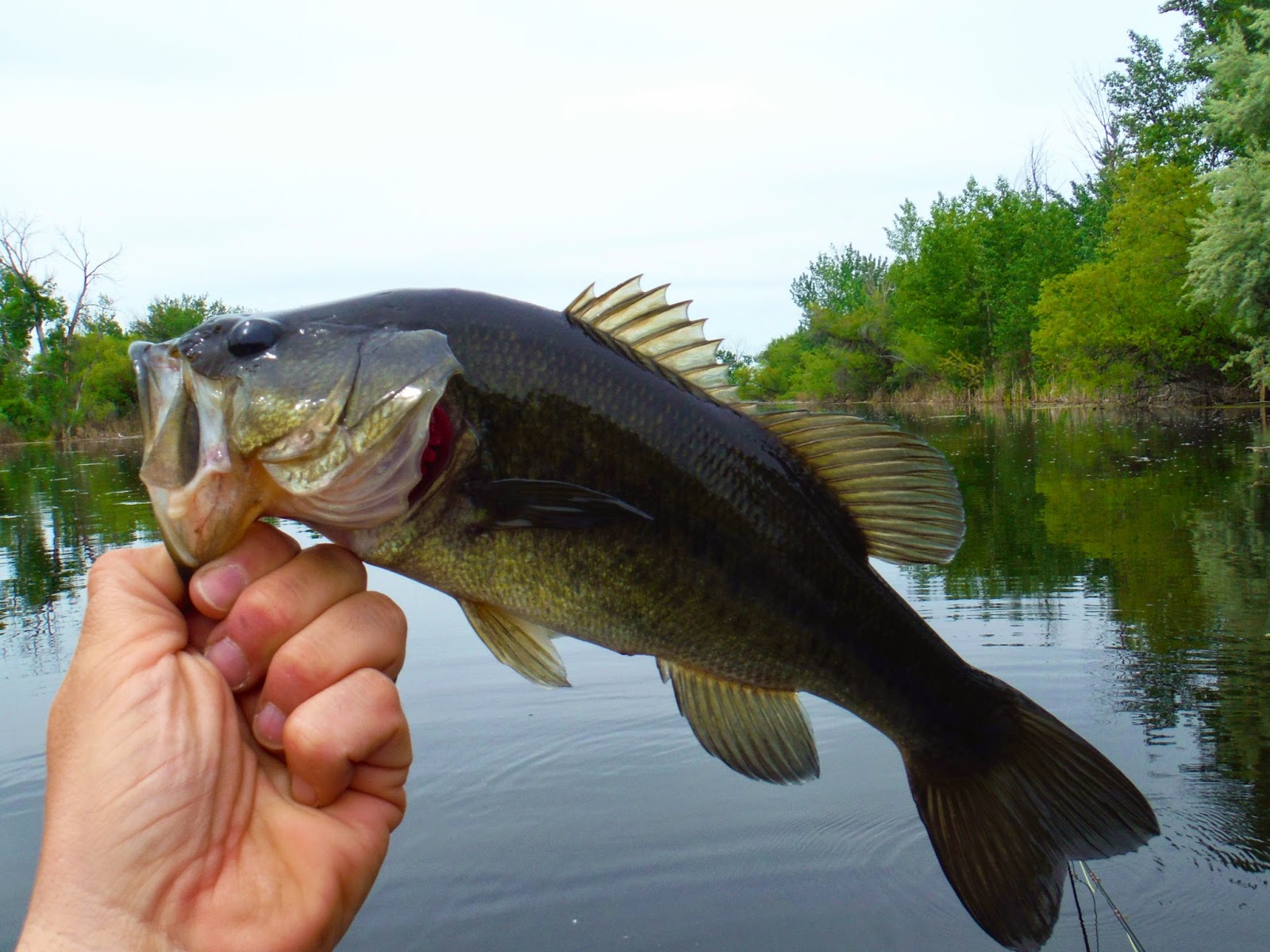 Gracy had yet to catch a fish, and by the time I let my fish go, I noticed that she was kicking to my side of the pond. Better yet, she moved into the spot where I would be heading next!
“Hey!  Are you snaking my water?” I yelled up to her, as she moved into casting position.
“Yeah…” She said happily, as if that was her water to start with, and I was just keeping it warm for her. Without so much as a glance my way, she started casting. 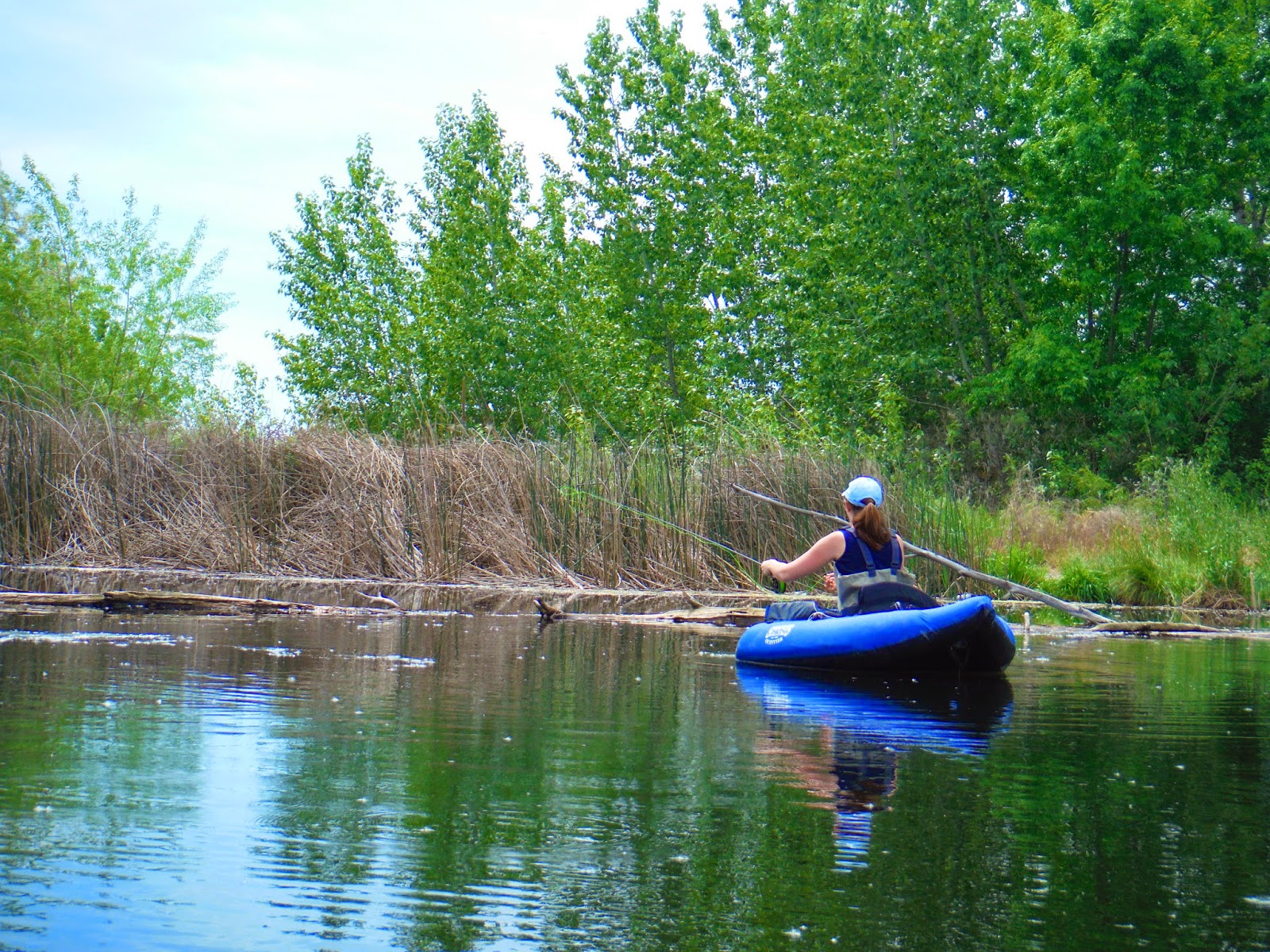 I ended up kicking over to her side of the pond, beating the edges of the water with my popper.  The fishing had slowed down, unless you count the bluegill that tried to eat my popper.  One was able to eat it!  When I brought it in, I was amazed on how the little bluegill was able to fit the popper in its mouth; you have to admire their spirit!  The next fish, however, was one I have never caught before.  As my popper popped away from a sunken bush, a bass took, and as I brought it in I noticed it was tagged. 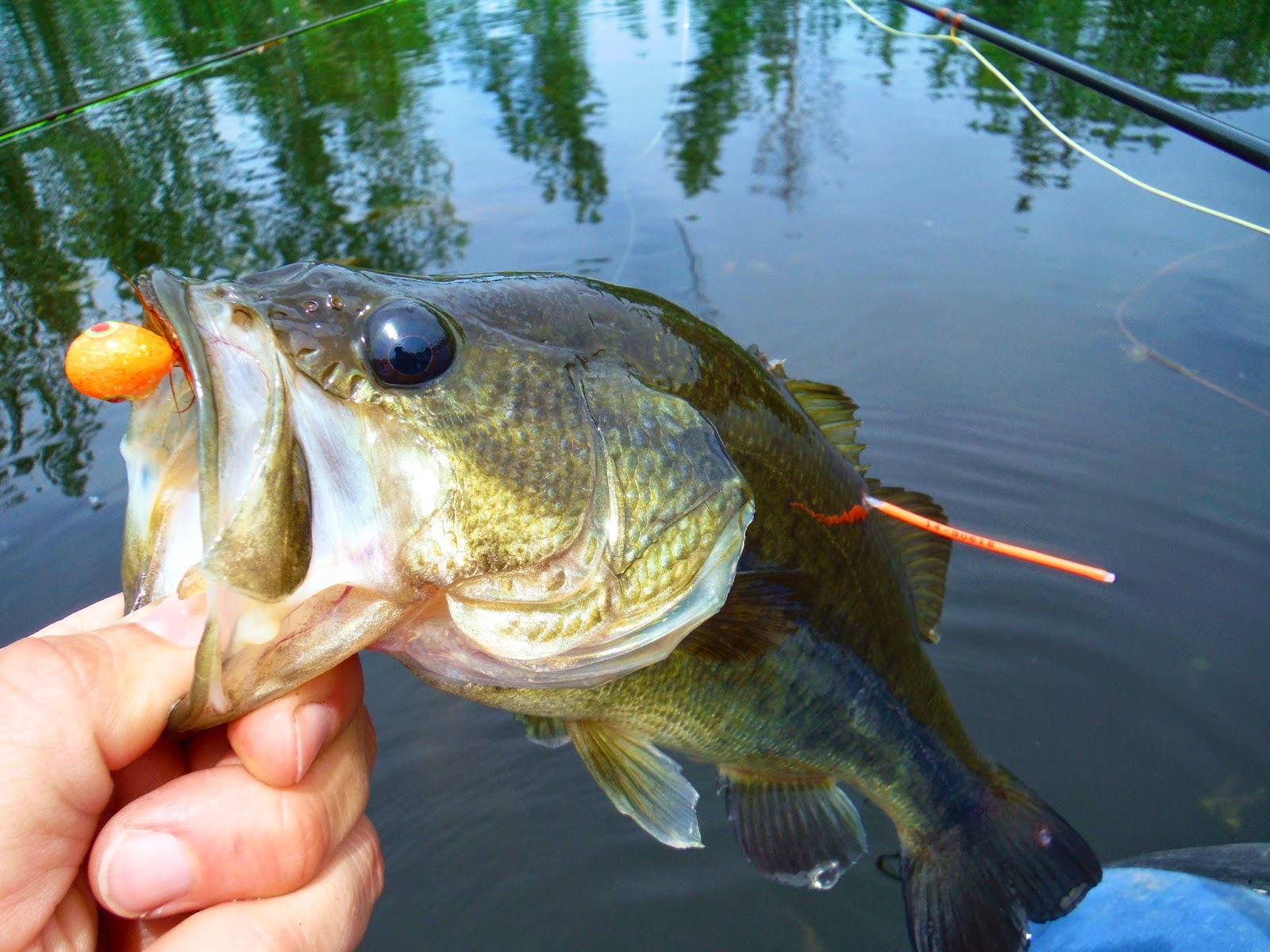 Gracy called the number on the tag and we gave the necessary information required for the fish.  Fishing had significantly died down after that.  To pass the time, Gracy threw her popper out to some bluegill, and watched as they tried to eat it.  The tiny bluegill pecked at the popper, and even took it under water a few times.
“They’re chasing it!” She yelled over to me happily.  Though it looked like she was having fun playing with the bluegill, we decided to head out in search of another pond. 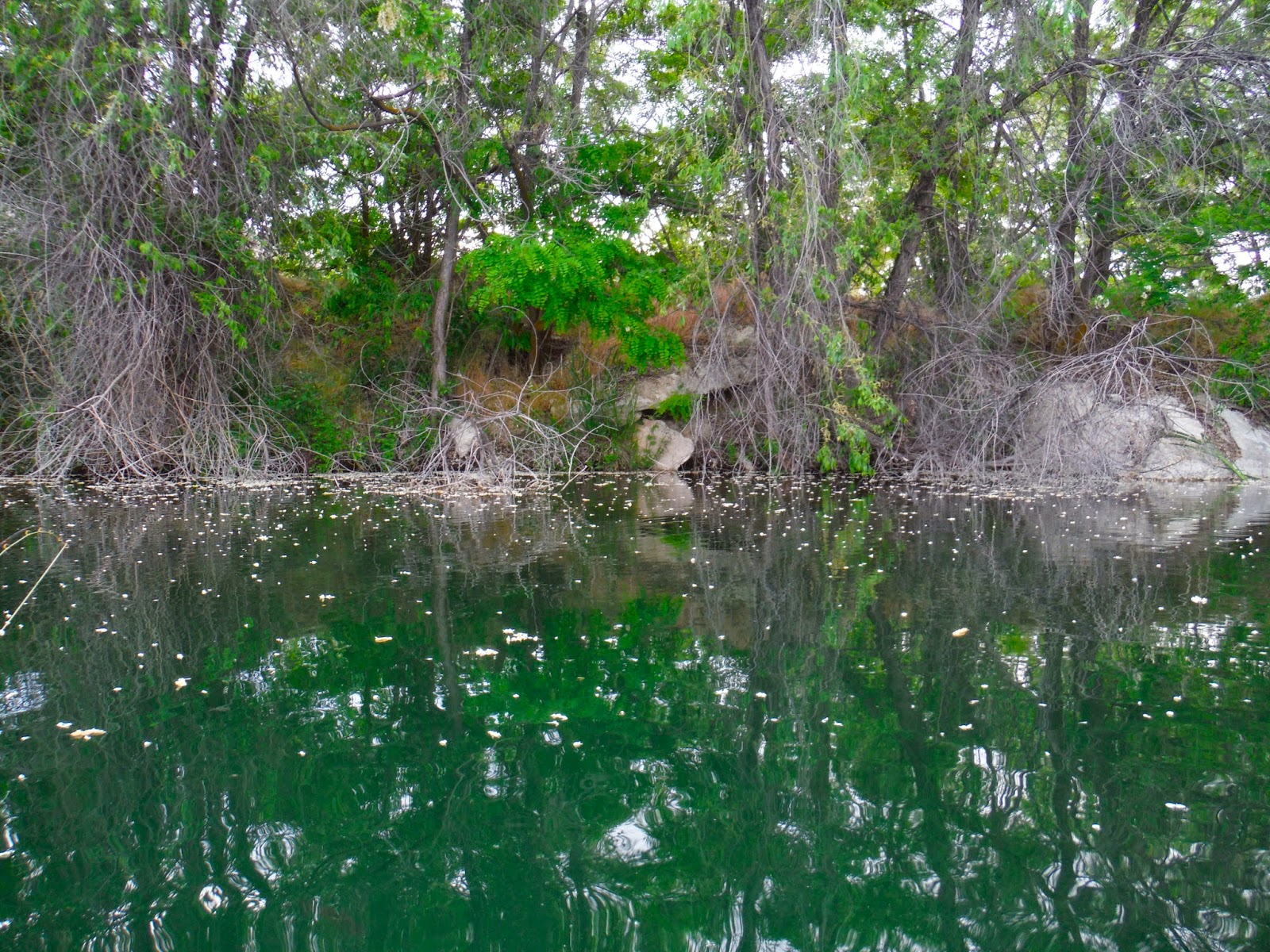 The water was super clear at the new pond, and we could see the bluegill and bass swarming the bank.  We kicked off with our poppers ready!
“Woah!” Gracy yelled, as a bass came up and smacked her popper.
“Awww…” Soon followed, as her fish came unbuttoned.
“You really need to set that hook.” I advised, because she was missing a few good strikes.  Determined not to miss another bass, Gracy kept her popper close to the bank, and was ready to set the hook at a moment’s notice. 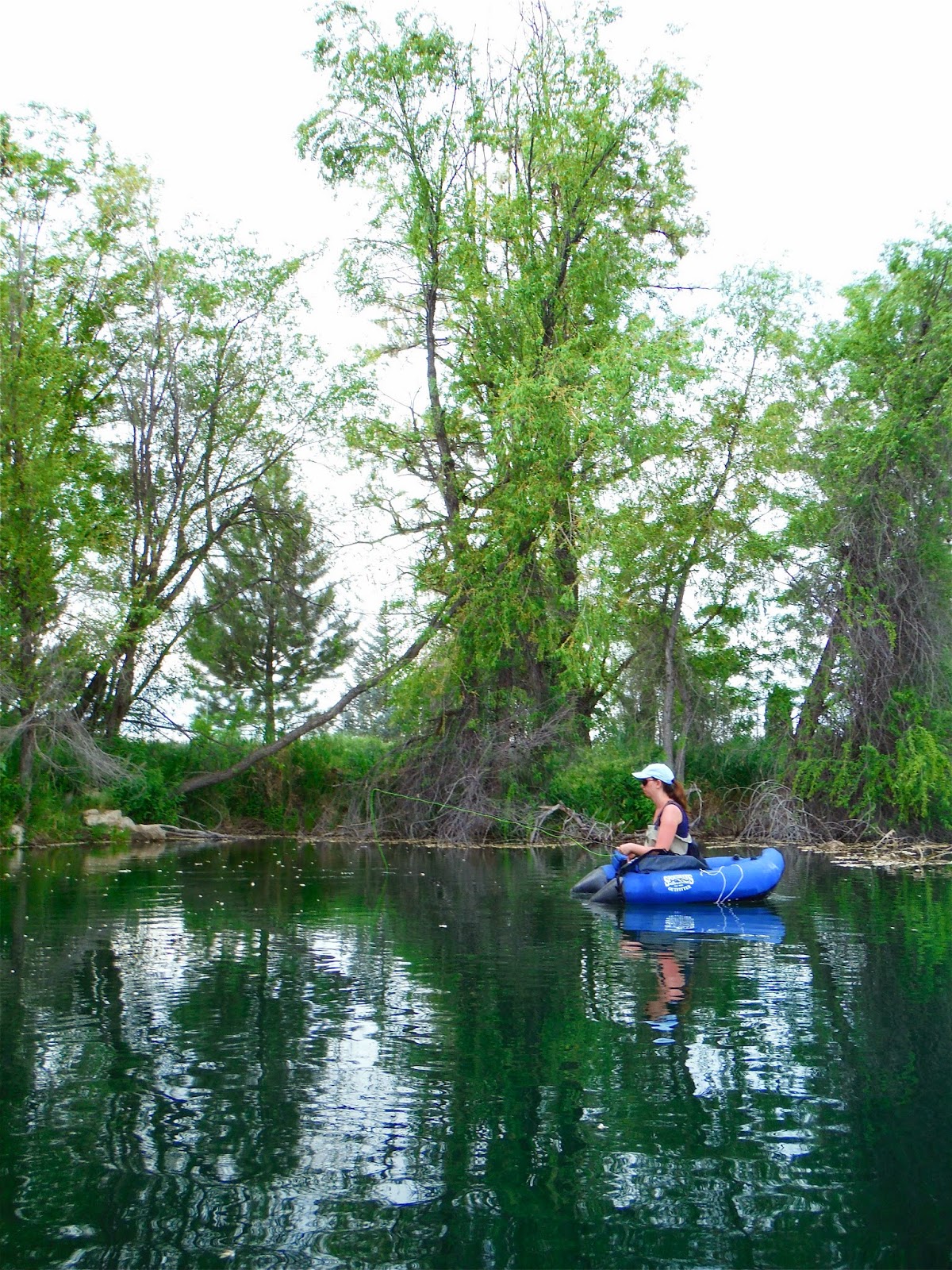 I had my eye on a pipe stuck out of the water, half submerged.  That has to have a bass in it, I thought as I started to cast.  My popper landed right where I wanted it to, and with one pop, a bass took!
“Woah!” I said as the bass hit faster than expected, and I wrenched back on the fly rod.
“This is a good one!” I yelled over to Gracy, who was kicking over to me.
“Do you want a picture?” She asked.
“Yeah.” I replied, as I brought in the bass, and held it up for the camera. 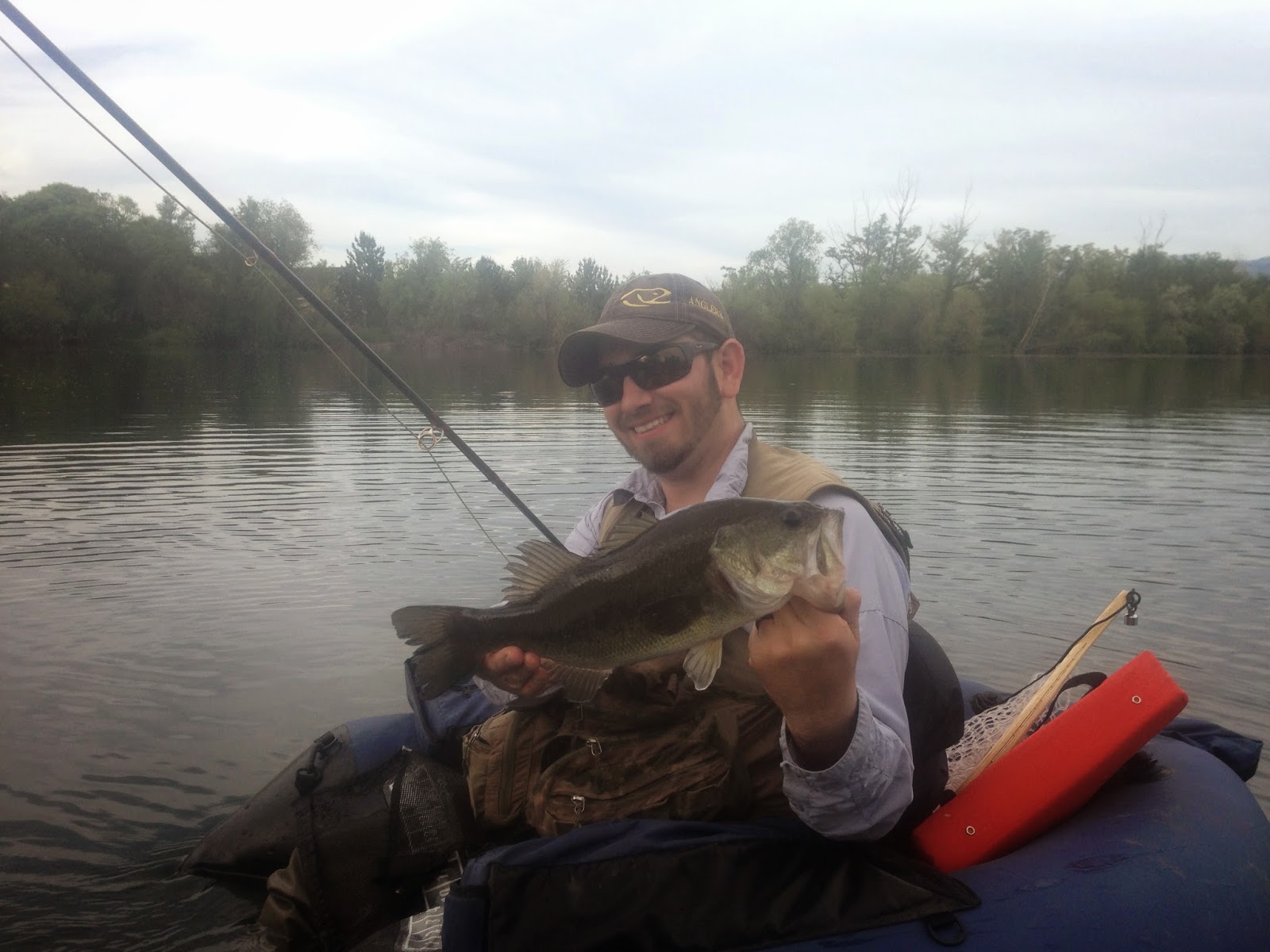 Soon after, Gracy was kicking near a fallen tree in the water and sent her popper flying in between the brush.
“You’re getting awfully confident over there…” I said, as her popper came inches from the lower hanging branches.
“Shut up.” She said, not even looking my way; her eyes were on the popper, and it’s a good thing they were.  A splash erupted and her pink popper disappeared.  In a flash she set the hook, and the fight was on!
“He’s running!  He’s running!” She called out, as the bass circled around her.
“Alright!” I yelled to her, getting my camera ready to take a picture.
“Get over here.” Gracy told her bass, that did not want to come in; but at last she got ahold of her fish and held it ever so gingerly for a picture. 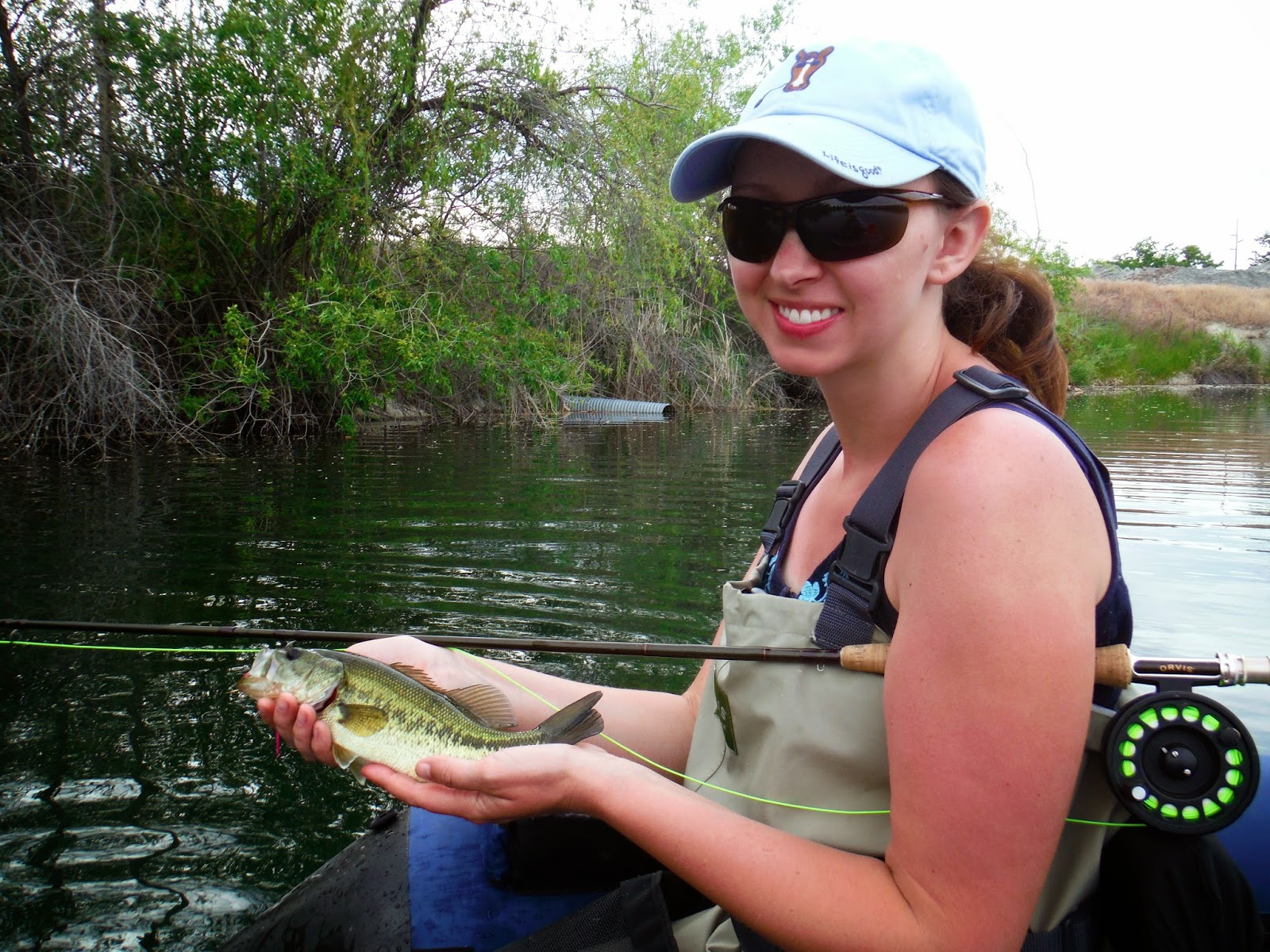 From then on we split up, and Gracy was making some accurate casts that could have easily gotten tangled up in the bushes that surrounded the water.  Every once in a while I could see her yanking on her fly rod trying to get her popper out of a bush, and she managed to get it out every time.  I, on the other hand, really got my popper snagged in a low hanging branch, and ended up losing it in the process.  As I was tying on a new fly, I heard Gracy in the distance fighting a fish. I was too far away to take a picture, but she held it up for me to see, and it was a nice fish! 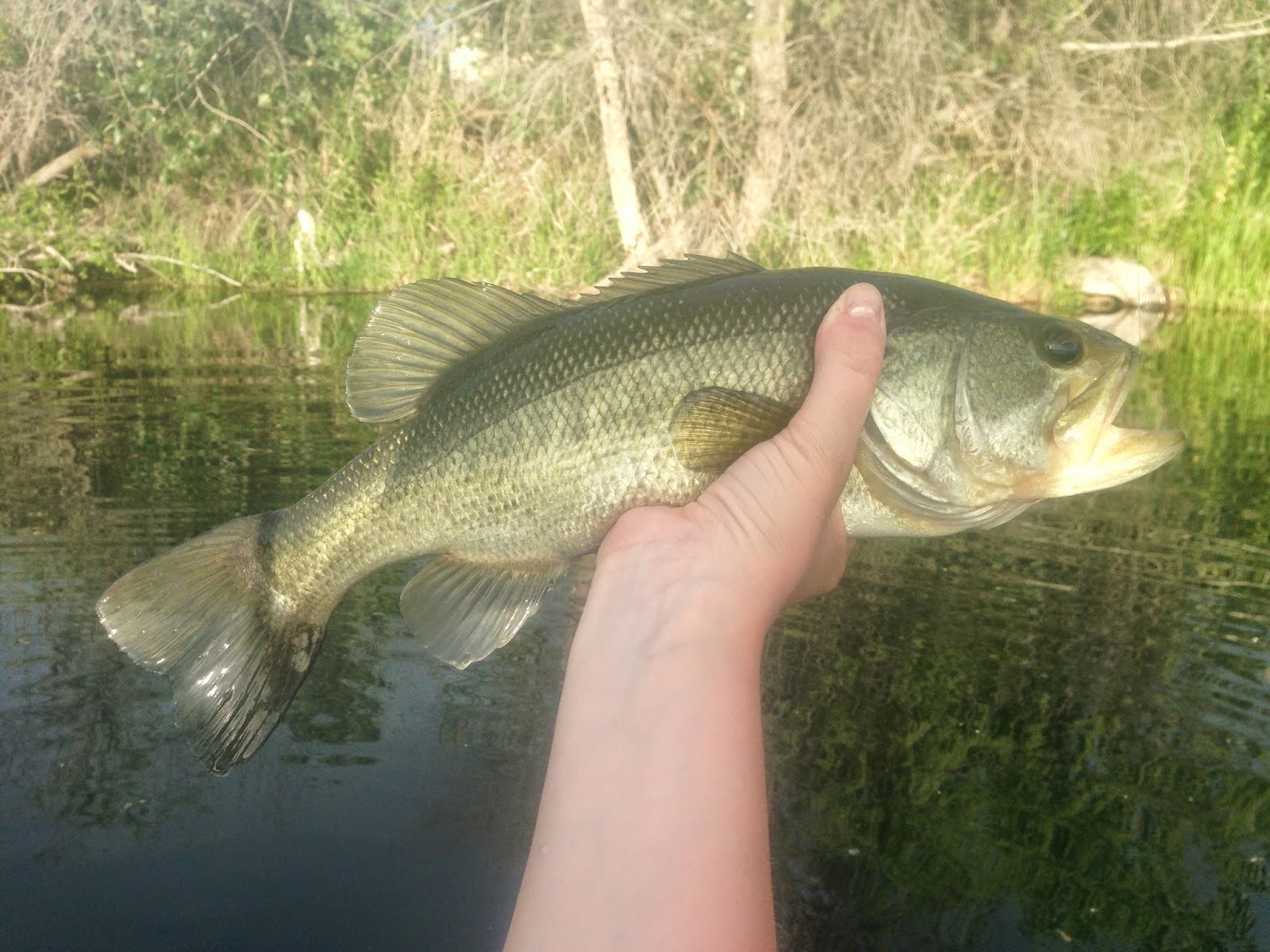 She had switched her fly to a Spiller Diver, and it was paying off. 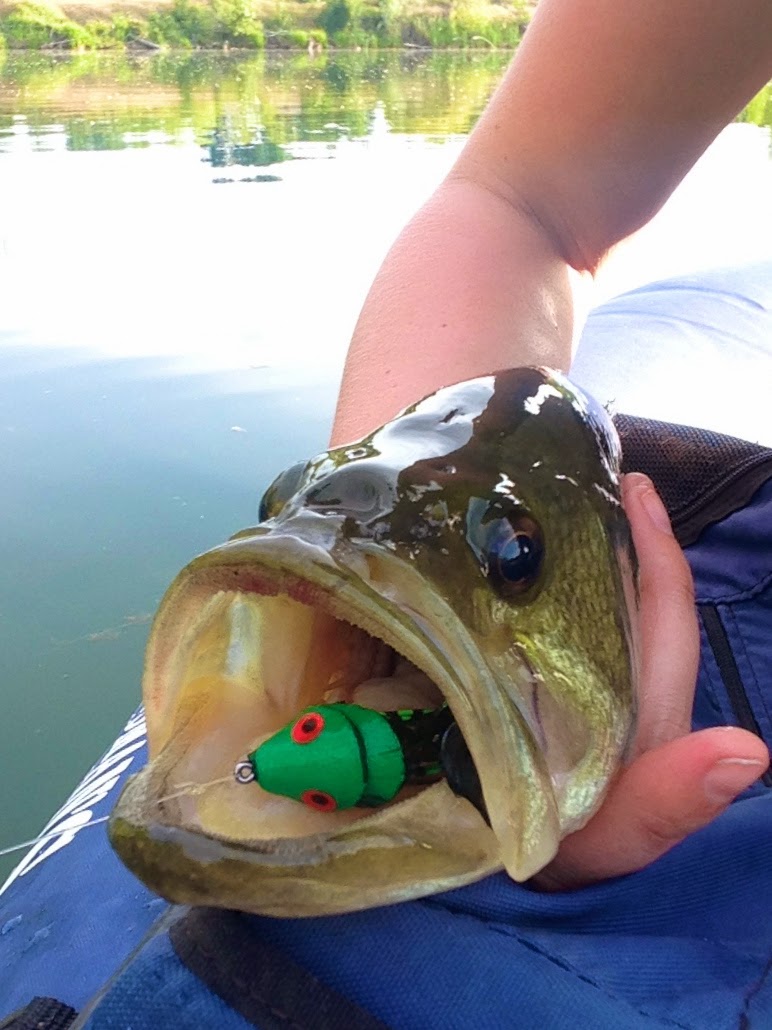 At one point, I decided to throw a streamer.  On my second cast, I ended up catching a fish.  With the way it was fighting I thought it was a bass, but when I brought it in close I saw it was a nice sized bluegill. 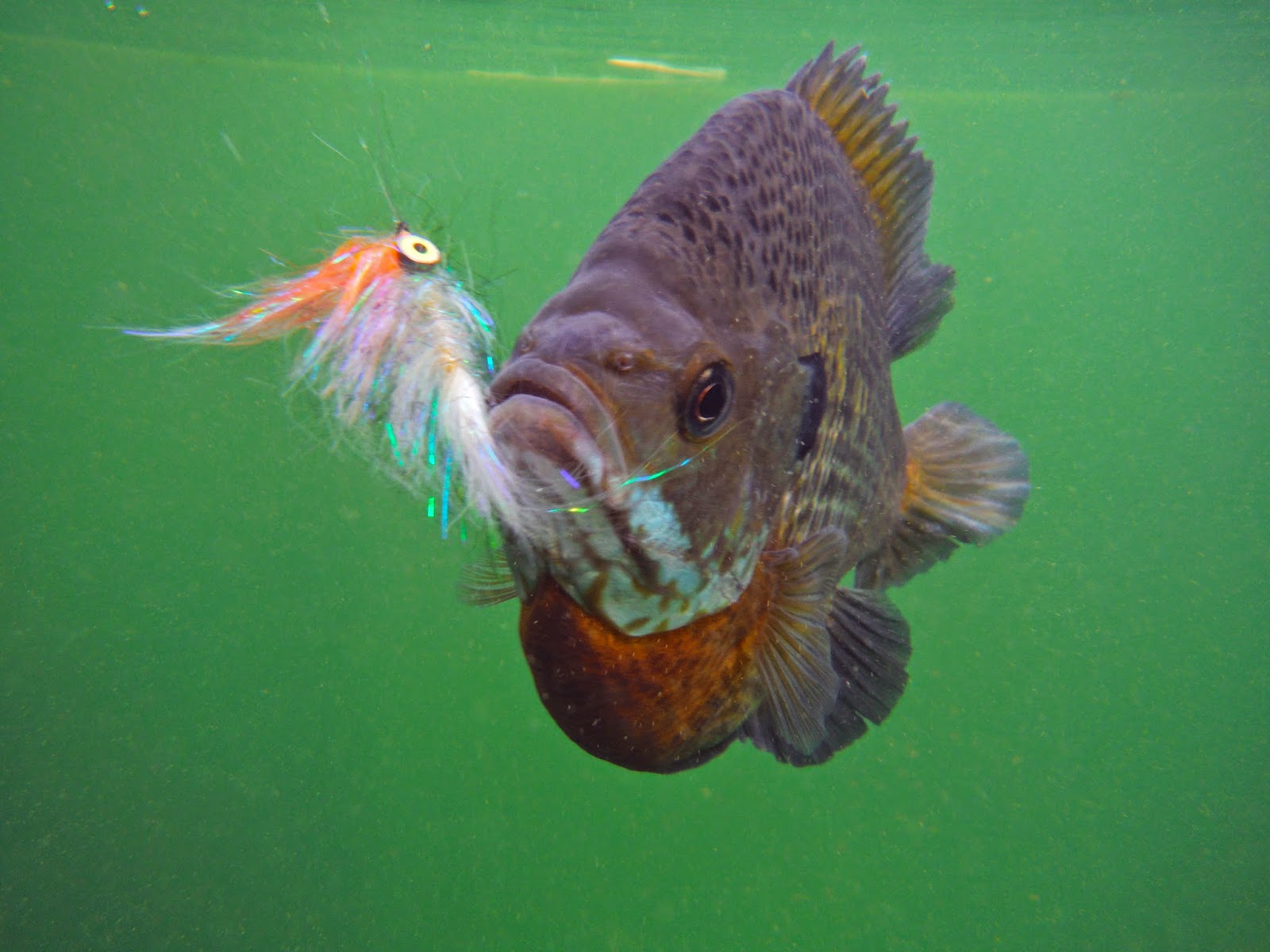 I soon switched back to a popper, and was catching a few bass as I kicked back to the car.  It was getting late, and I promised Gracy we wouldn’t be more than a few hours.  I did hook into a nice bass near the end, but my popper came flying out of the water when the bass threw the hook.
“You really need to set that hook…” Gracy said, giving me a matter-of-fact look.
“Quiet over there!” I said back, before we got out and headed home after a great day of fishing with the wife.

The first pond was not the best, so I’ll say you can skip Duff Lane Pond; however, the second pond you will have to discover. Believe me, you will be happy when you do.

1 thought on “Fishing with the Wife”