Skip to content
It’s about a six hour drive home from Moses Lake, and my wife, Gracy, doesn’t like to leave back to Boise too late in the day. Convincing her that I would be back from fly fishing Rocky Ford Creek in a timely fashion was not easy.  My past record of returning late from fishing was not helping, but alas I got the okay, and my dad and I headed out to the creek. 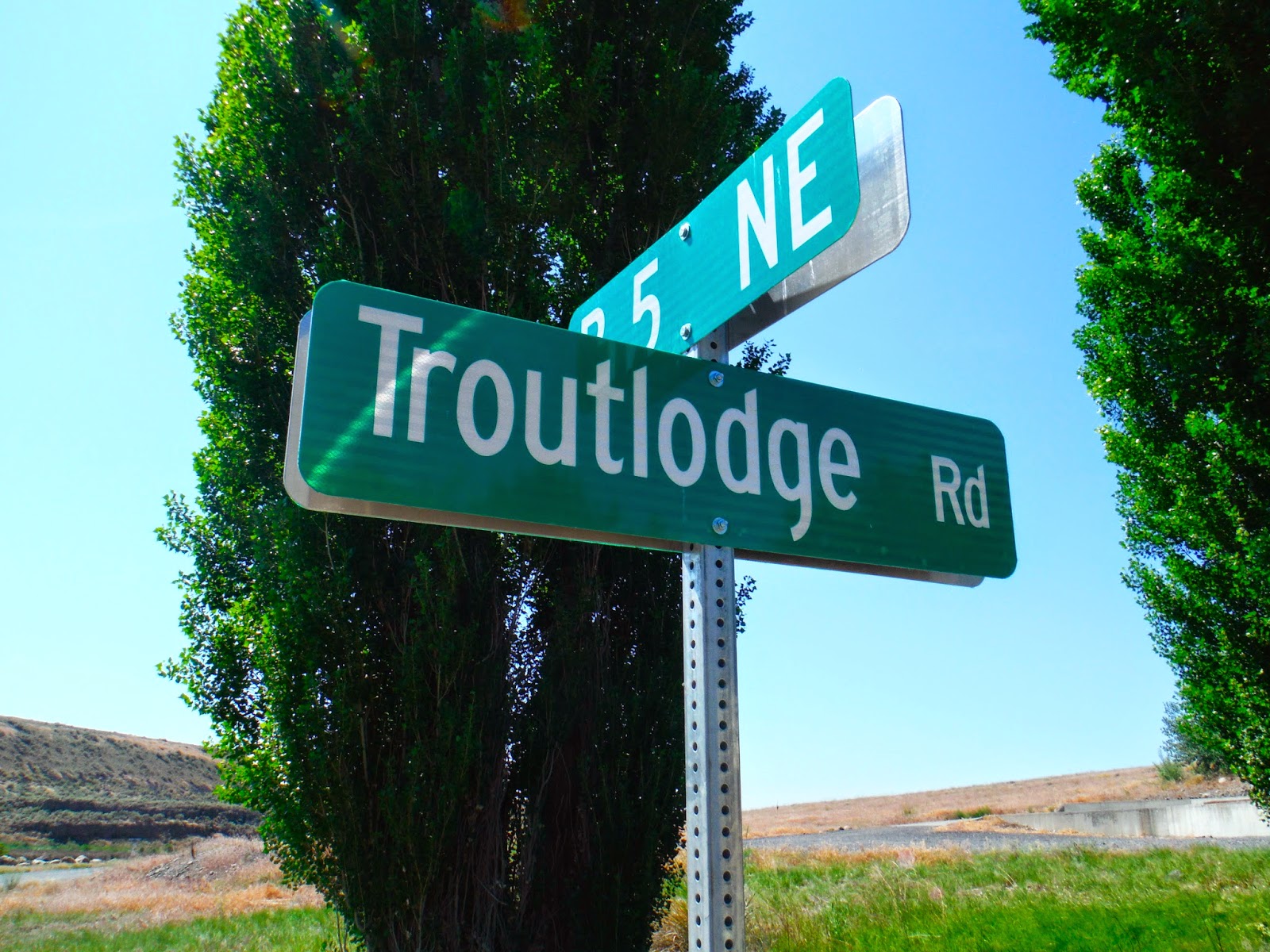 We geared up quickly, and I extended my leader to tie on a pico spider.
“Dad!” I yelled from the other side of the vehicle, “I want to set you up with a pico spider.”
“No.” He said, quickly. “I want to pick my own fly.”
“Okay…” I said, and walked over to the creek. 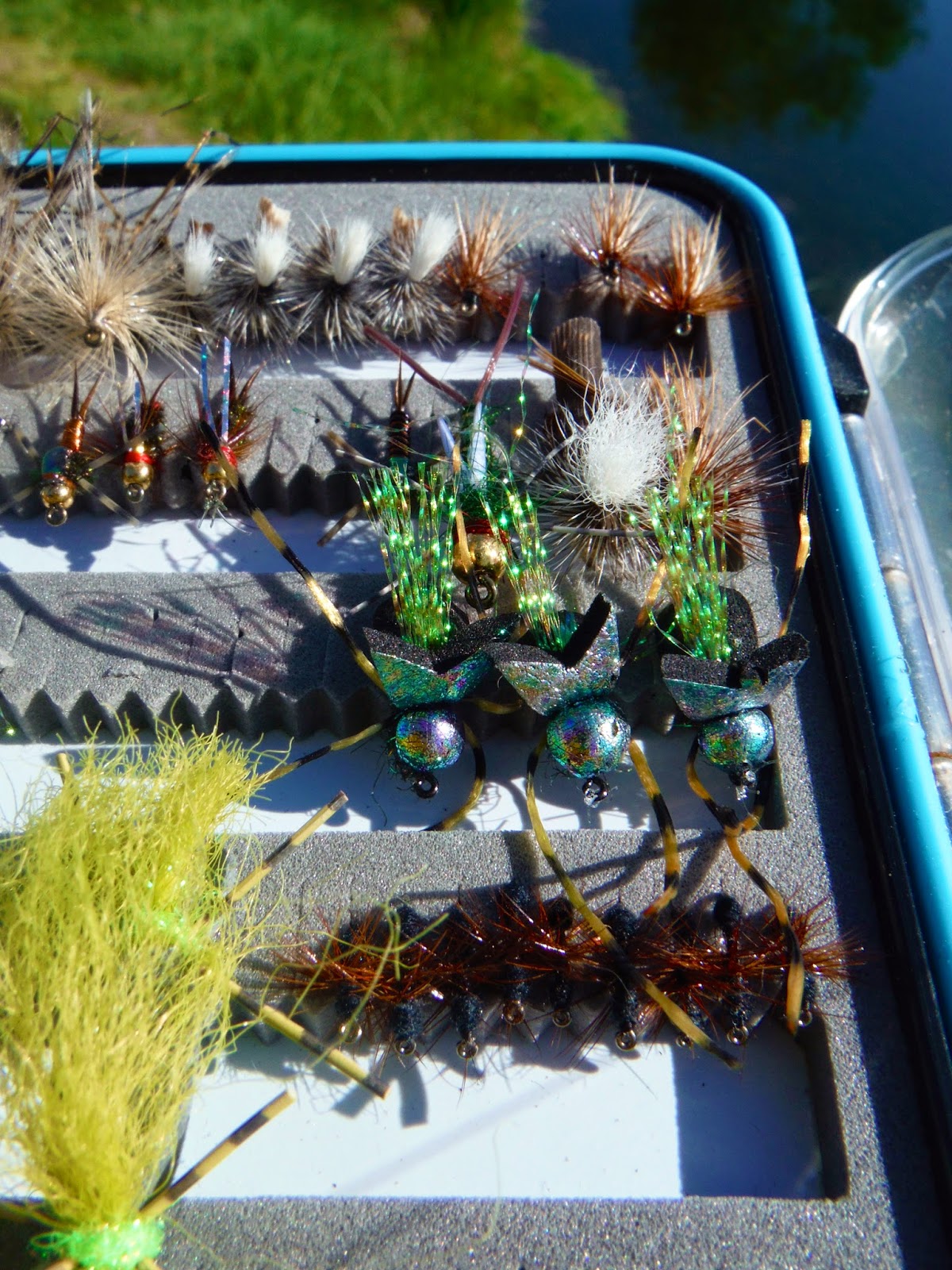 I was about twenty yards away from the creek, when I stopped because of a fish I saw near the bank.  I was advised a while back to cast my fly while standing as far away from the creek as possible; the only problem with this was the stinging nettles that could easily snag my fly, if nothing ate it. This poisonous plant lined the bank just about everywhere at Rocky Ford Creek. Oh well, I thought, and presented my fly.  It hit with a splat, and my line laid over some shrubbery that included stinging nettles.  I noticed the fish I had spotted earlier was not at all interested in my fly.  The pico sat on a stagnate part of the creek not moving, when a fish I hadn’t even seen rushed out of an undercut bank and smacked it.  I immediately set the hook, causing the fish to start thrashing! 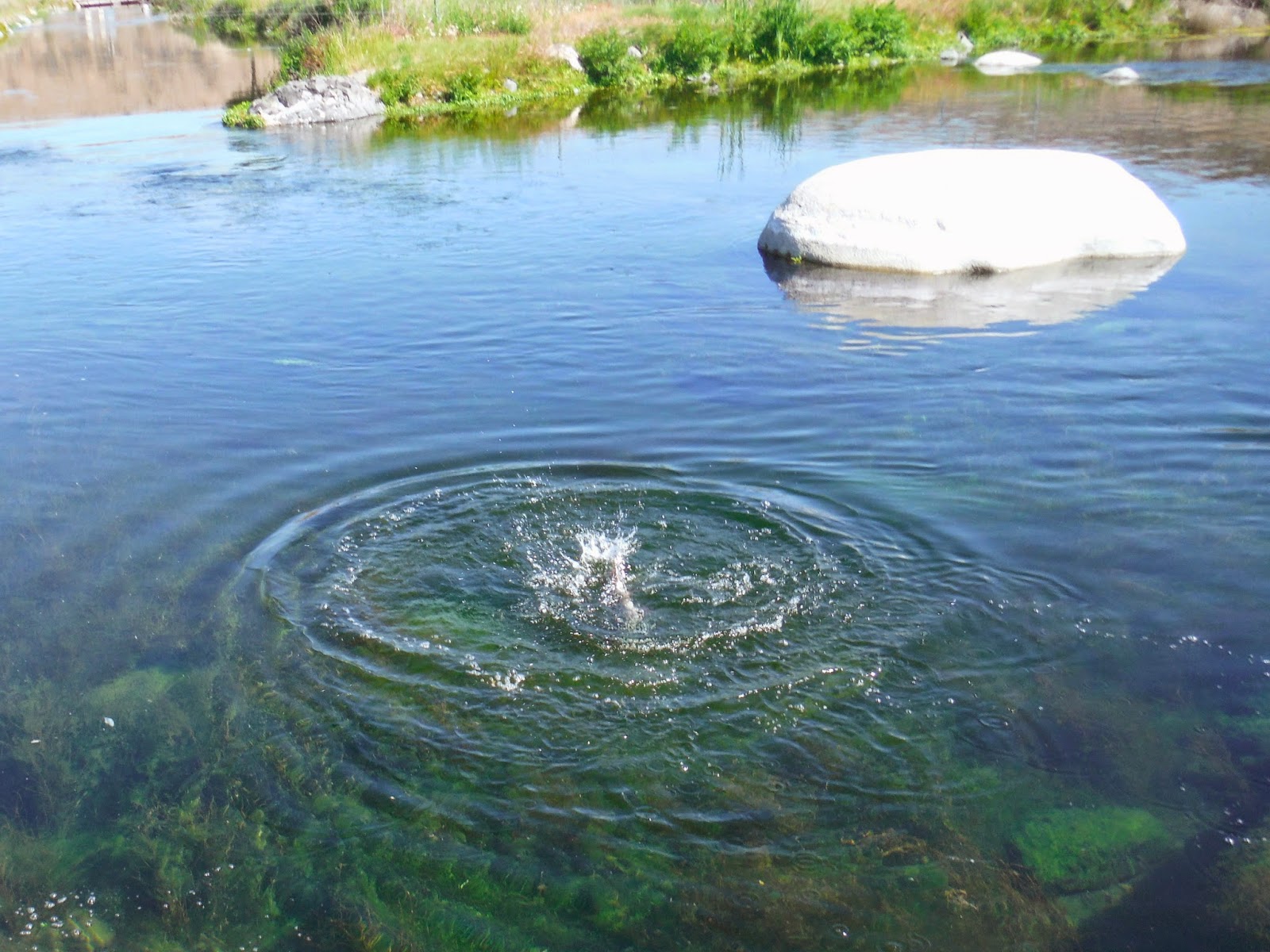 “Already?!” My dad yelled over to me, as I fought the fish.  He came over quickly as I made my way over to an easier spot to land my fish. 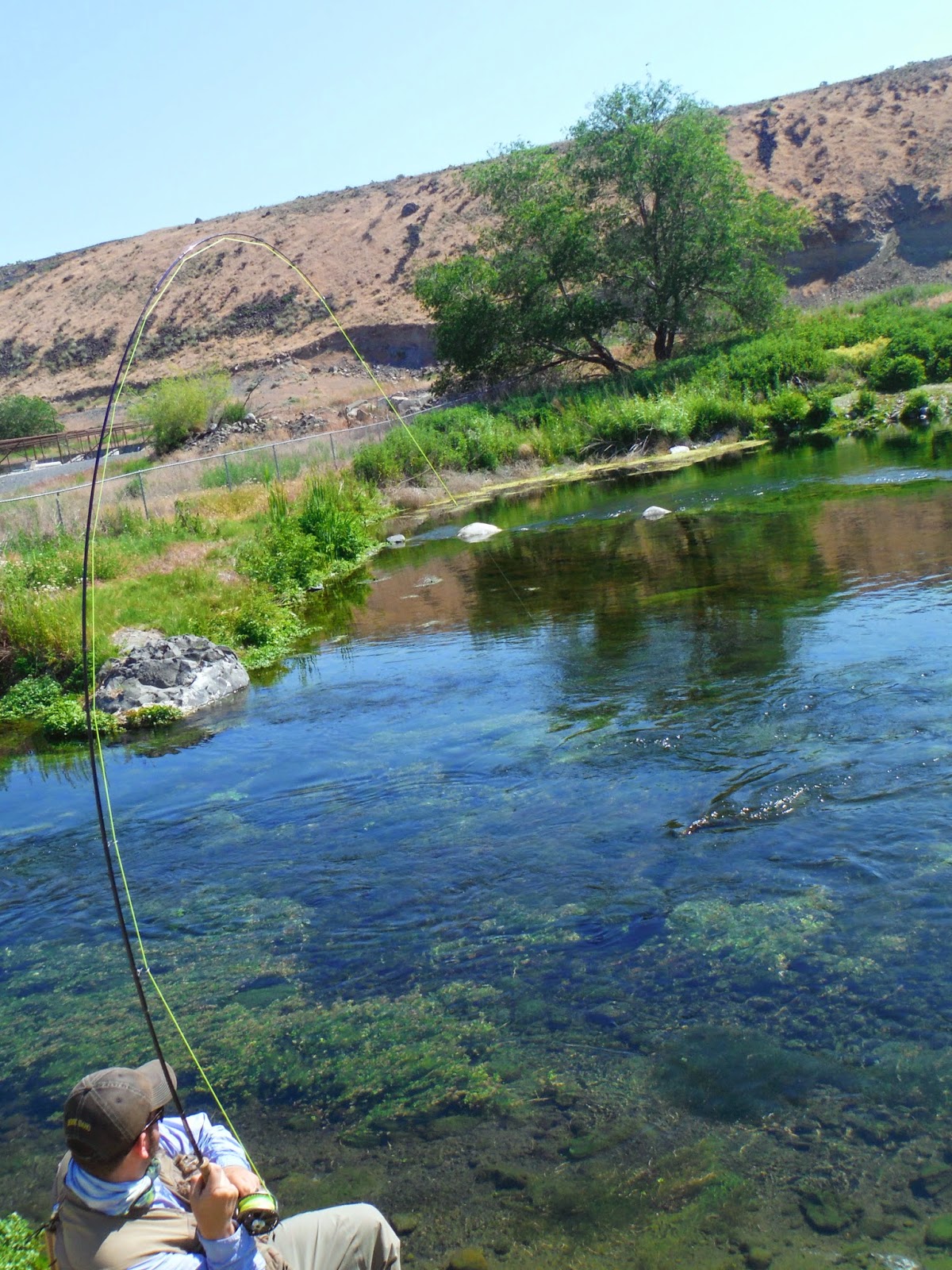 The fish tired quickly, which made it easy to net. In a small amount of time I had netted my first fish of the morning; things were looking up! 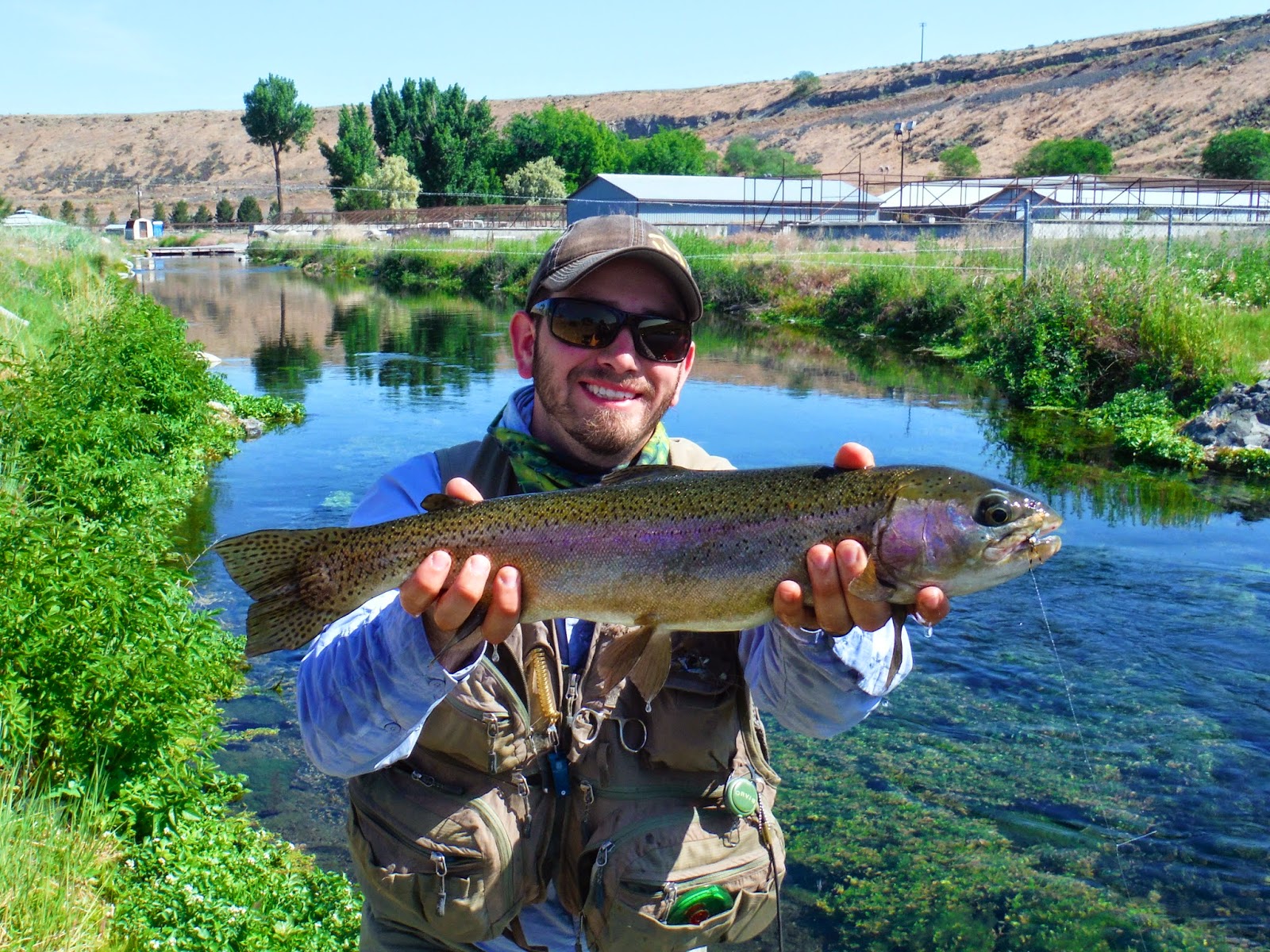 While watching my fish swim away, I noticed another fish nearby, and it had just eaten something off the surface.  My dad went back to fishing his way, while I prepared to make another cast. 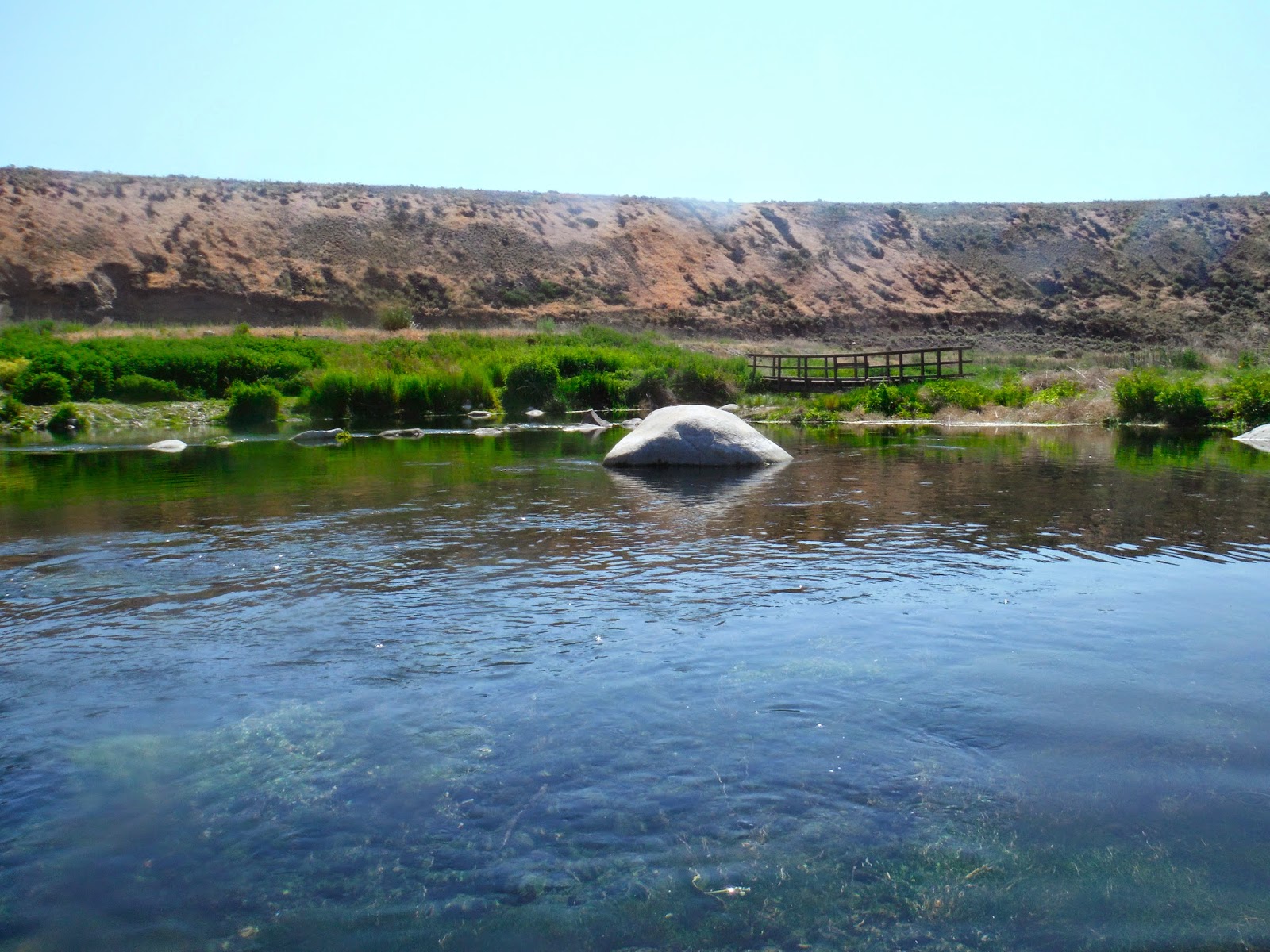 A few looks was all I was receiving from the fish, so I moved on. Standing back at the same spot I had hooked my first fish, I watched another fish rise further upstream.  I got closer to the bank, as this fish was easily over 60 feet away; but with the 9 1/2 foot 6-weight Helios 2, this cast was no problem.  The pico spider hit the stream and floated right past the fish.  Then, in a flash, the fish turned towards the pico and ate it.  I lifted my rod tip, pulling the pico from the fish’s mouth. The wake of the pico spider slid a few feet from the fish, but the fish had other plans!  In a sudden burst of energy, the fish tore after my pico, just as it waked away, and hit it again!  This time when I set the hook, I felt the full pressure of the fish. 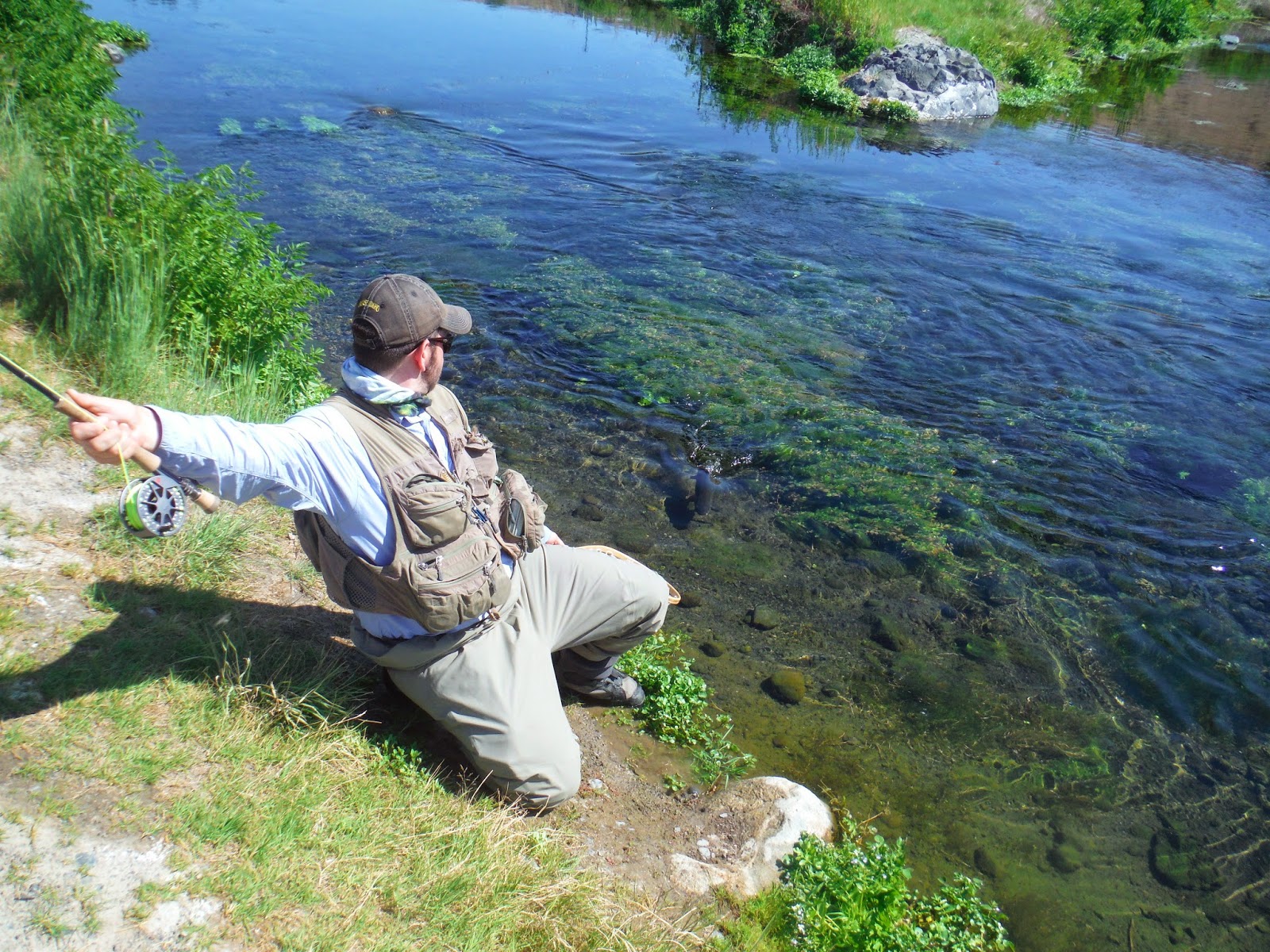 My dad came running just in time to watch me net my fish, and I held it up for the camera. 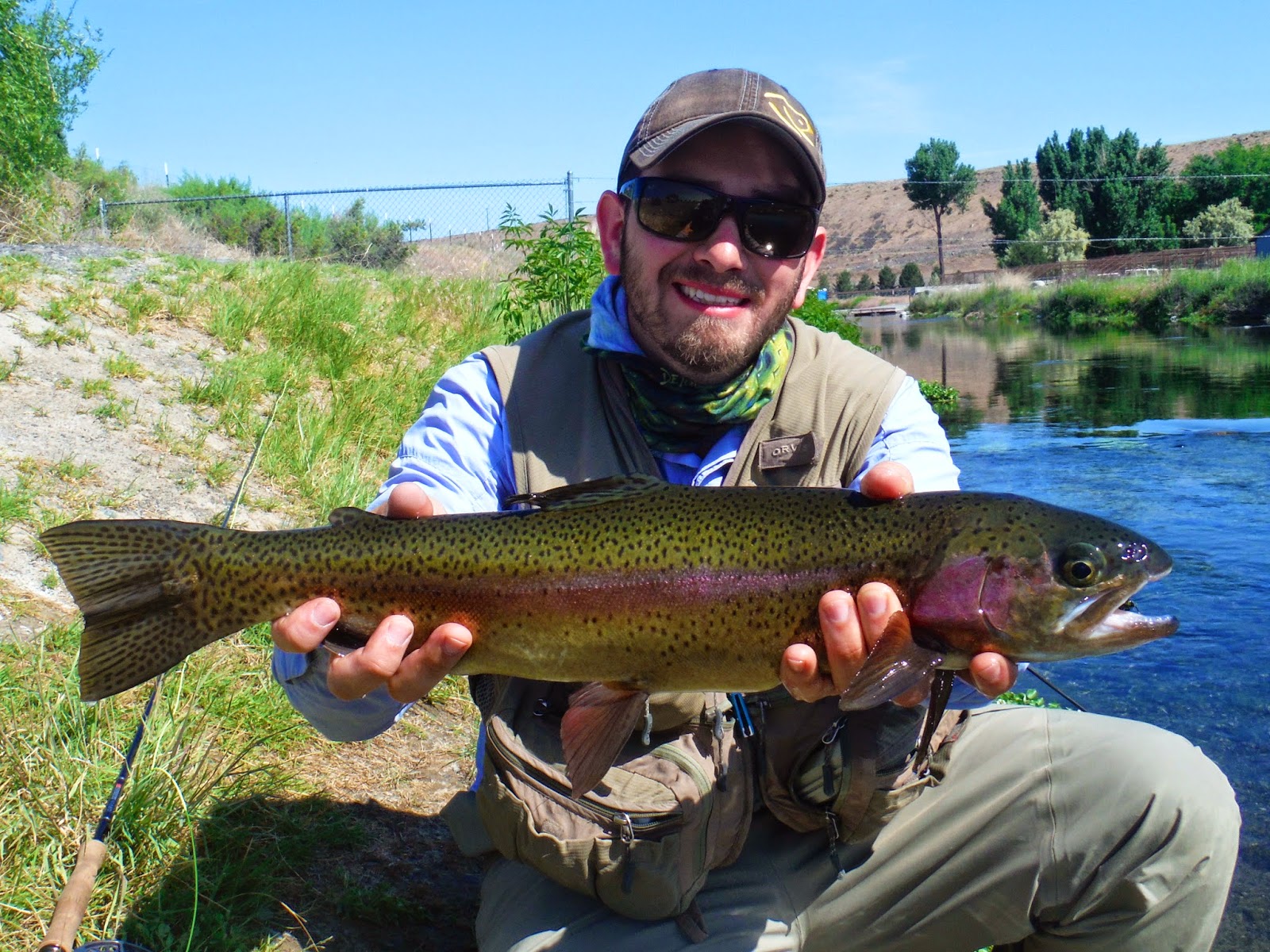 “I think I am going to try a pico spider.” My dad said, after watching my fish swim off.
“Well it’s about time!” I said, “Let me get you one.”
“No, I have one here.” He said, and walked back to his spot.  I moved to the bridge, and was trying to get some fish to take my pico.  I did have one hook up, but I lost it in the fight.
I looked back at my dad who was casting a… pico spider?
“Dad, what are you casting?” I asked.
“A pico spider.” He said, and made another cast.  His fly hit with a large splat, too large.
“Dad, let me see your fly.” I said, walking over to him.  He brought in his line, and I grabbed his leader.
“Dad, please tell me you don’t think this is a pico spider.” I said, holding a double beaded stonefly nymph.
“Well, it has legs?!” My dad said.  I just sighed, clipped his nymph off, and tied on a pico spider.
“There, that’s a pico spider.” I told him, and I went back to the bridge. 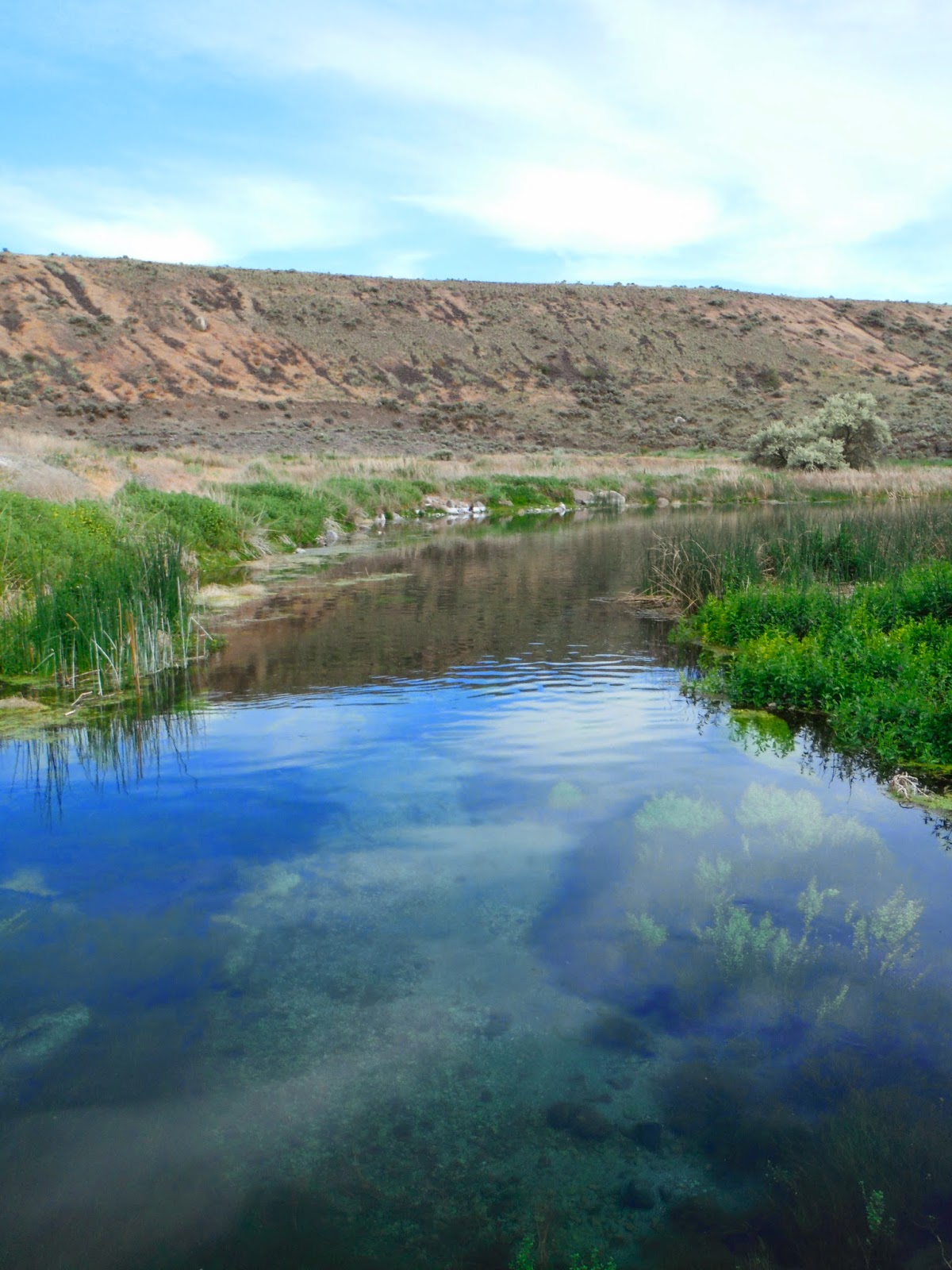 I could see six fish, all of them feeding subsurface.  Sometimes at Rocky Ford Creek, you need to cast to the fish you can’t see, in hopes they will be caught off guard and eat your fly.  Suddenly, I heard the thrashing of a fish.
“I got one!” My dad yelled, and I came running.  This was the first time my dad had hooked a fish at Rocky Ford Creek, so the pressure was on!
“Nice, Dad!” I said, as the fish started to run. 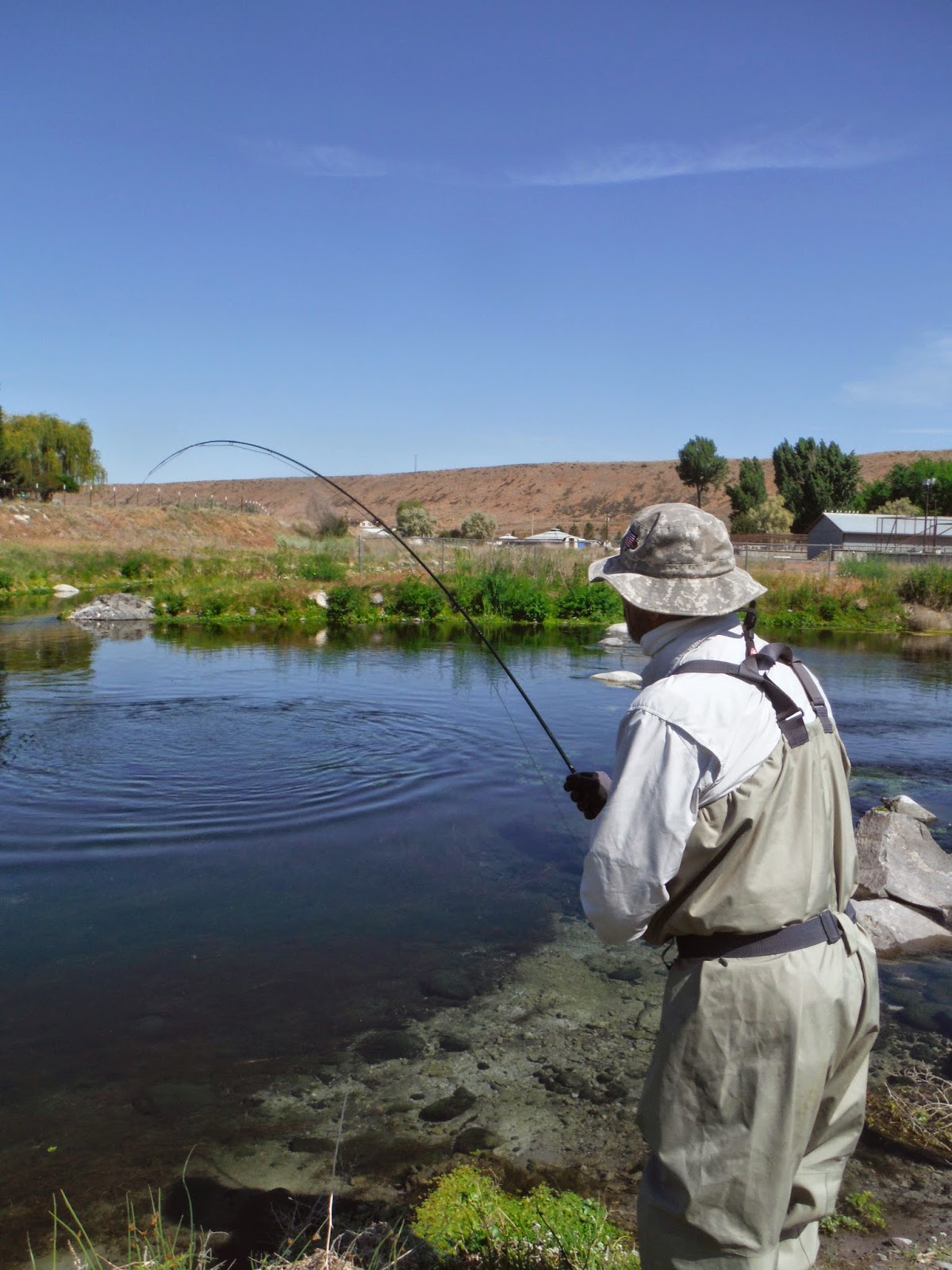 The force of the fish caused my dad to drop the rod tip, so that it was almost pointing at the fish.
“Keep your rod tip up!” I yelled.
“I can’t, it’s pulling too hard.”
“Well, give it some line; let it run if it wants to run!”
Give it line, means to allow line to leave your reel so that the fish can run, while maintaining a fair amount of tension on the fish.  Not understanding this, my dad let go of his line entirely: causing his line to go completely slack and releasing any leverage on the fish.
“WHAT ARE YOU DOING?” I yelled, “LIFT YOUR ROD TIP!” But it was too late, the fish had come unbuttoned.
“It’s gone…” My dad said sadly.
“Dad, you can’t just drop your fly line, you have to keep the tension.” I explained, and walked back to the bridge.
I was a bit frustrated because I wanted my dad to bring in that fish.  Sometimes I forget how second-nature some of this stuff is to me now, and what seems simple to me may be difficult for a beginner, like my dad.  My sorrow was short live, however, as my dad hooked into another fish in almost the same exact spot as the previous time. 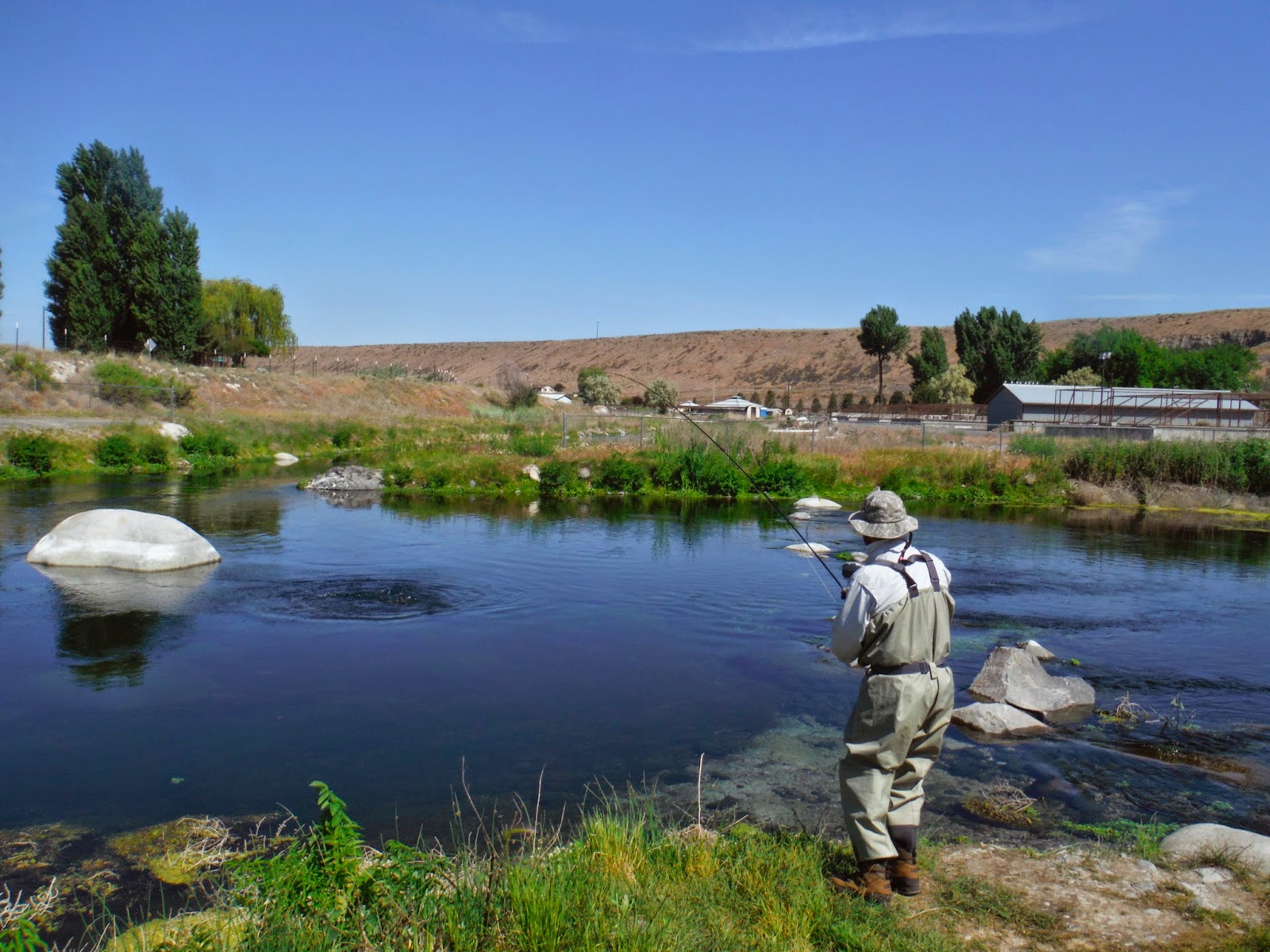 “Okay, Dad, keep your rod tip up and don’t let your line go slack!” I said quickly, as I rushed to his side.  The fish thrashed with force, indicating a big fish!
“This is a good-sized fish, so give it some line if it wants to run.” I said, as the fish started to run.  The pull of the fish yanked the fly rod down, and my dad had the tip pointed right at the fish.
“Dad, keep your rod tip up!” I yelled at him, and he brought it back up.  The weight of the fish had his fly rod doubled over, and there was no way I could net his fish where we were.
“Let’s go to that spot…” I said pointing to where I landed my fish. “That way, I can net it for you.”
“Okay.” My dad agreed, and he started walking over. 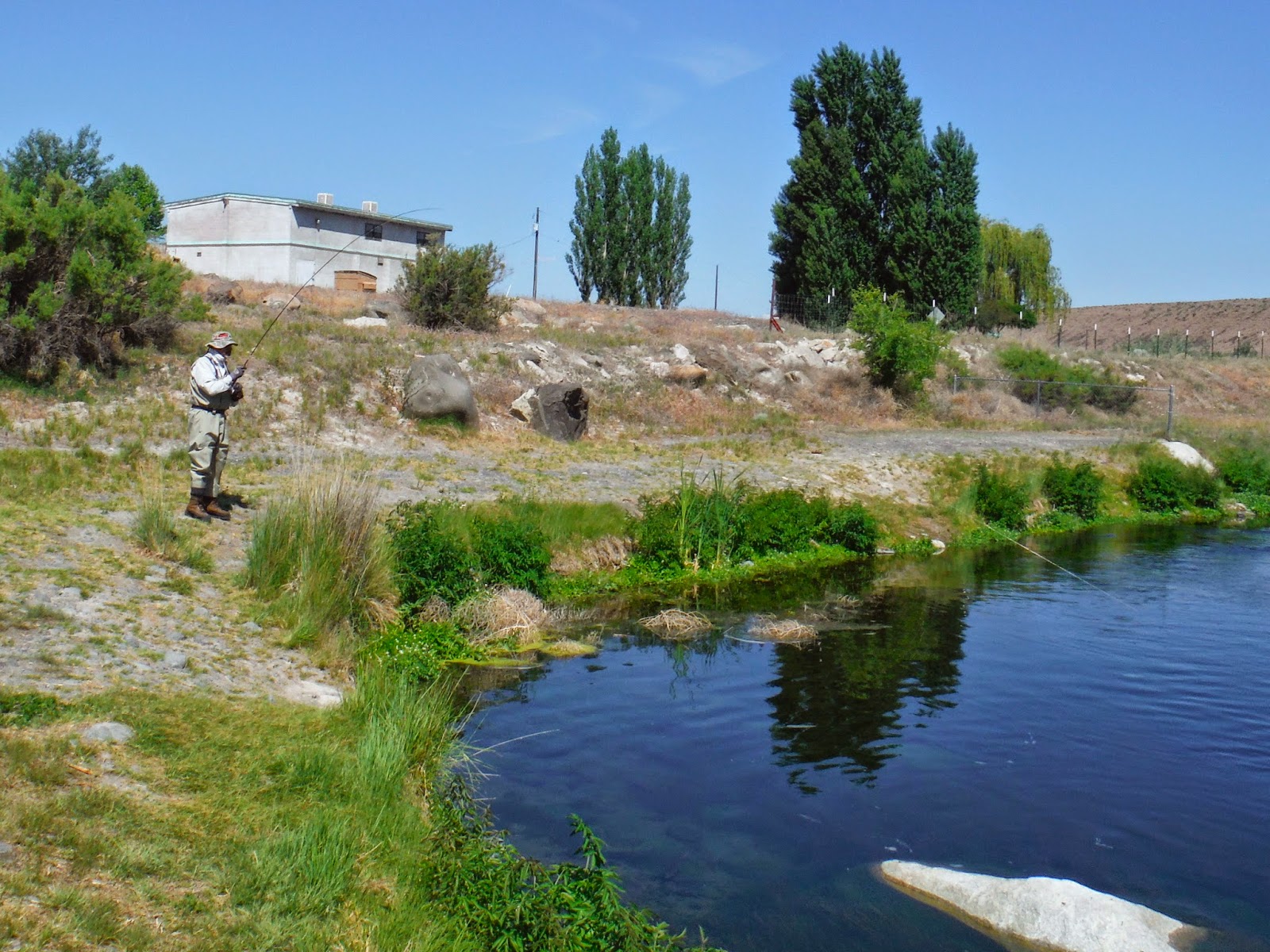 The fish was not making things easy, as it tugged and thrashed.
“This is a big fish!” I told my dad, who was allowing his rod tip to get dangerously low.
“Keep your rod tip up!” I yelled at him again. 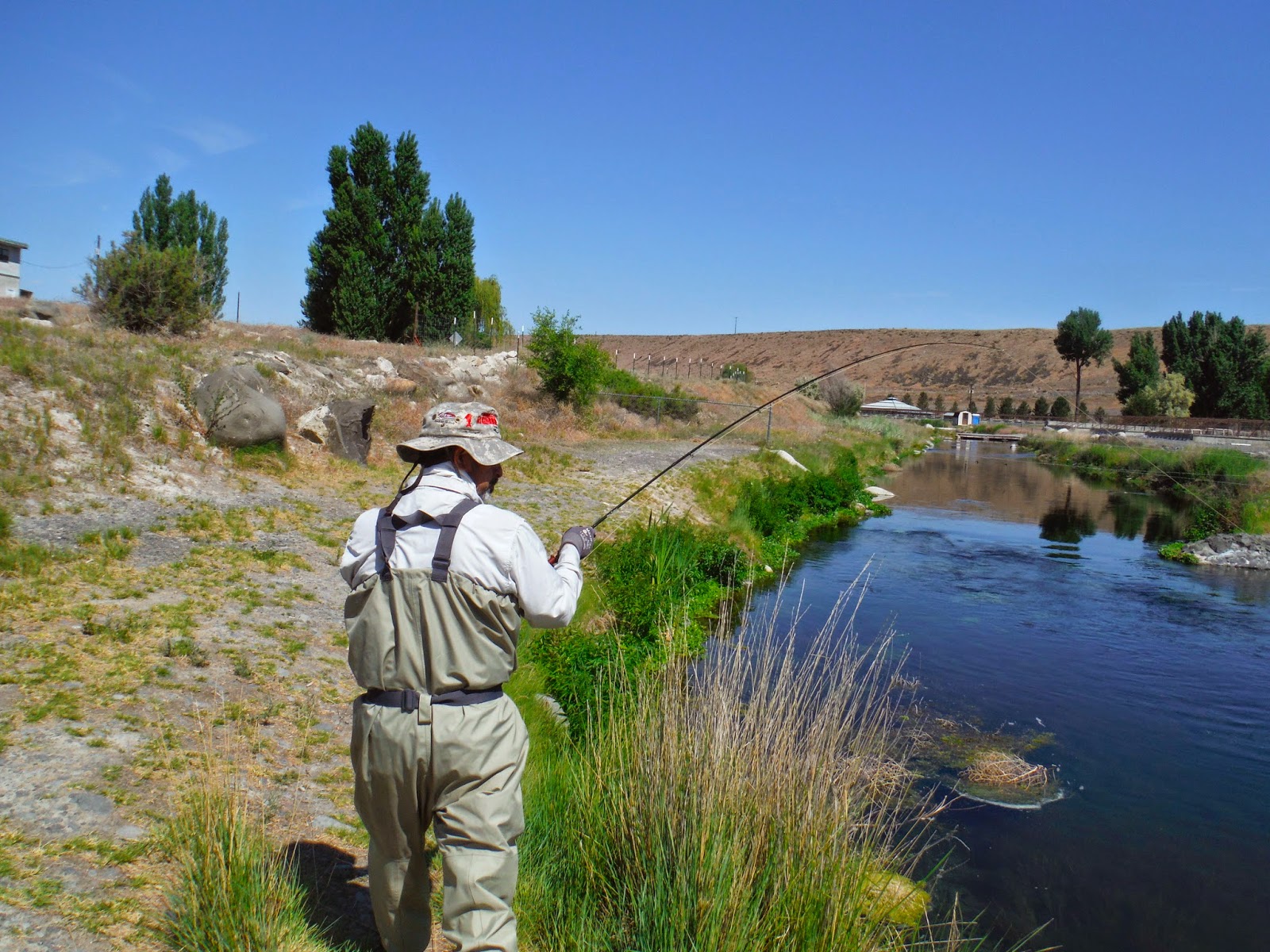 The fish bolted again, and my dad’s hand went forward, pointing the rod tip at the fish.
“DAD!  Keep your rod tip up!” I yelled, “You have 6X tippet on and it’s not that strong.”
“Well, it keeps pulling!” My dad yelled back at me, in a concerned voice.  The fish quickly switched directions, and my dad didn’t readjust for the incoming fish.
“Keep it taught, keep it taught!” I yelled, but my dad dropped the rod tip, allowing a tremendous amount of slack in the line.
“I lost it…” He said, dismally.  I quickly looked in the water, and saw that his fly line was moving upstream!
“GODDAMNIT DAD! LIFT YOUR ROD TIP!” I said, simultaneously reaching over to lift his rod tip.  He brought his rod back up before I could touch it, and the weight of the fish was eminent!
The fish had noticeably begun to tire, and it was almost in netting range.  Then, as if we needed anymore bad luck, I noticed a wind knot in the 6X tippet, just below where the 4X tippet was tied on.
“Dad, you have a wind knot!” I yelled over to him.
“I don’t know what that is.” He replied.  Wind knots are tiny knots you can get in your tippet, usually caused by bad timing in your cast.  They can severely drop your tinsel strength in your leader, sometimes by 70%.
It’s going to break, I thought, as the fish was inches from the net.
“Just be careful…” I said, “Bring it in very slow.” The fish was inching closer.
“Step behind me, and take a few steps back.” I said, and he did.  The added leverage brought the fish in, and I stretched out to net it.  The fish was so big that it didn’t fit in my net, and with one good flop, it was back out of my net.
“Get over here…” I said to the fish, and netted it again; this time I had it!
“YEAAAAAAAA!!!!” I yelled, as my dad came to get a picture of his 26 -inch MONSTER rainbow trout that he brought in all by himself! 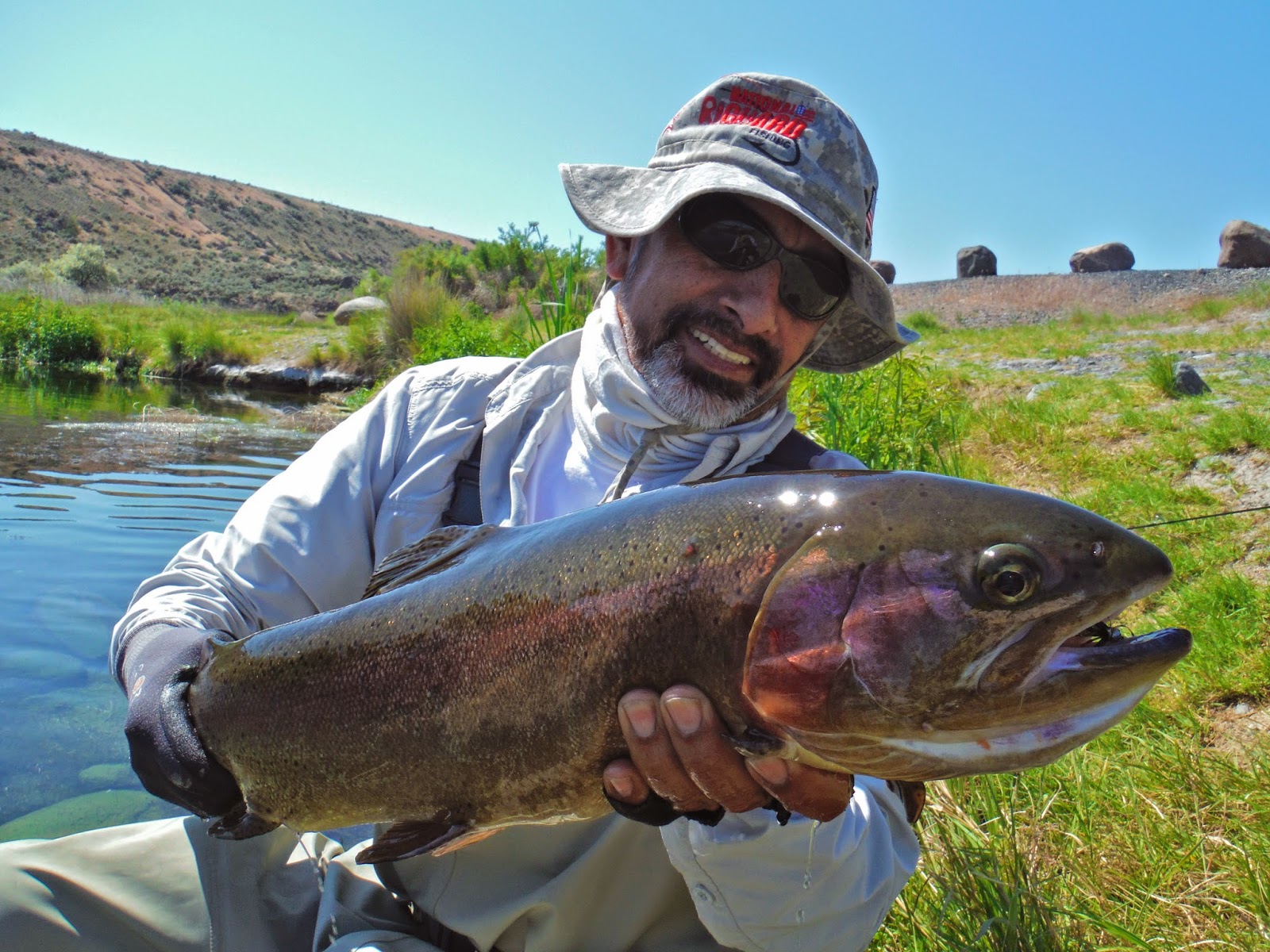 The last time I saw my dad smile so much was when someone got his coffee right.  We snapped a few pictures of his fish before putting it back in the water.  My dad held it up in the water, and it slowly started to swim away. 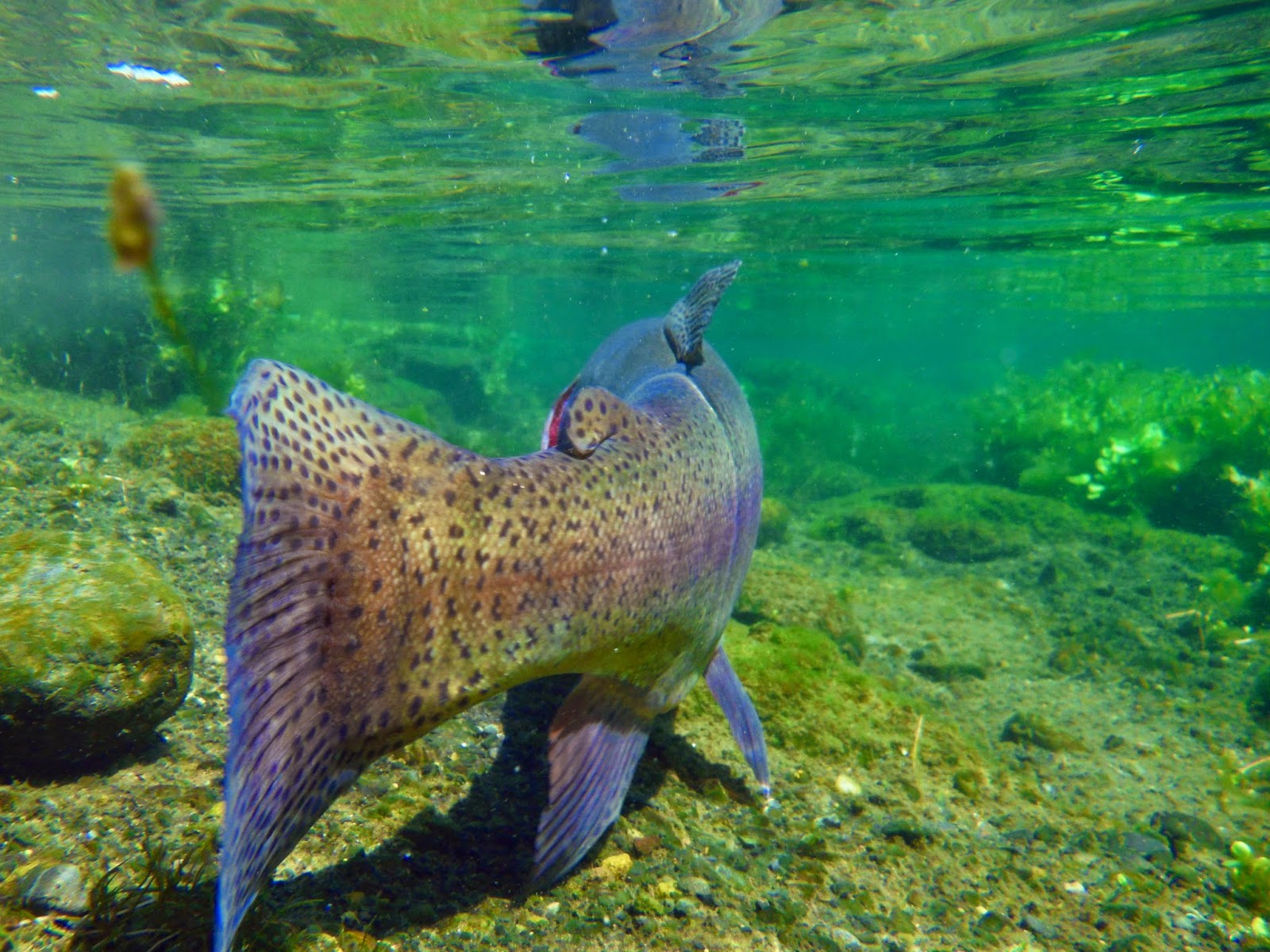 We both watched as his 26-inch fish started swimming further upstream and out of sight. 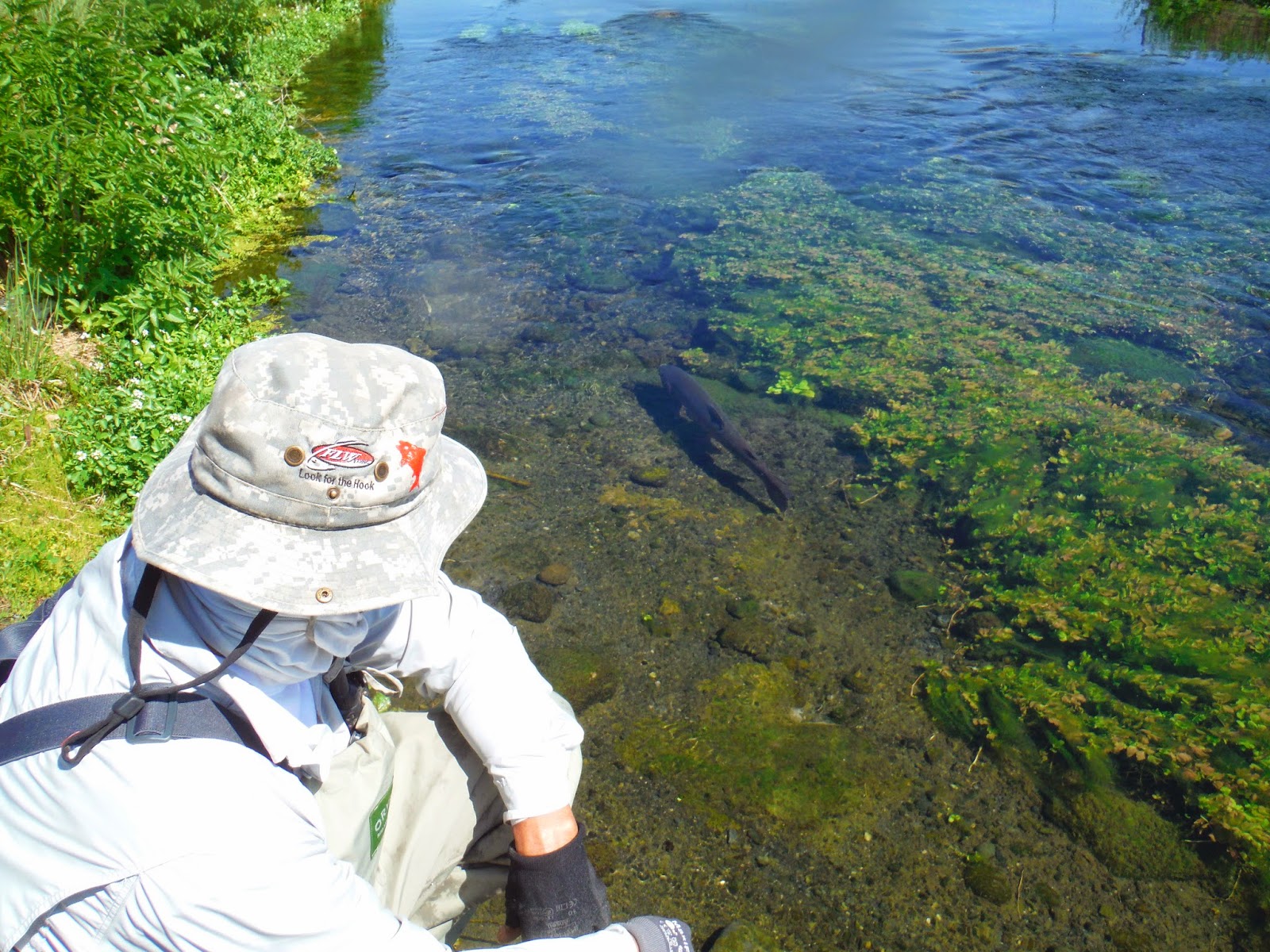 After the excitement of the my dad’s fish, we gathered our equipment and headed home.  Upon our arrival, I pointed out to my wife that I was a little early getting home, and she was happy about that.  Then my mom came out to greet us.
“So, did you guys get any fish?” My mom asked happily.
Both my dad and I looked at her smiling.
“What?” My mom asked, smiling back at us.
“Wait until you see what Dad caught.” I said, and we all headed inside to see the pictures, ending a phenomenal week of fly fishing back home!