Skip to content
It was only a month ago when Mike McLean and Wes Atkinson walked up to Josephine Lake, and found that it was still frozen. Today, small sheets of snow tucked in shadows created by the mountain is the only sign that this path was once covered with snow and ice.  The warm weather has now made this path up to the lake a fantastic one, even for my little dog, Kiwi, who led the way on her first alpine lake experience. 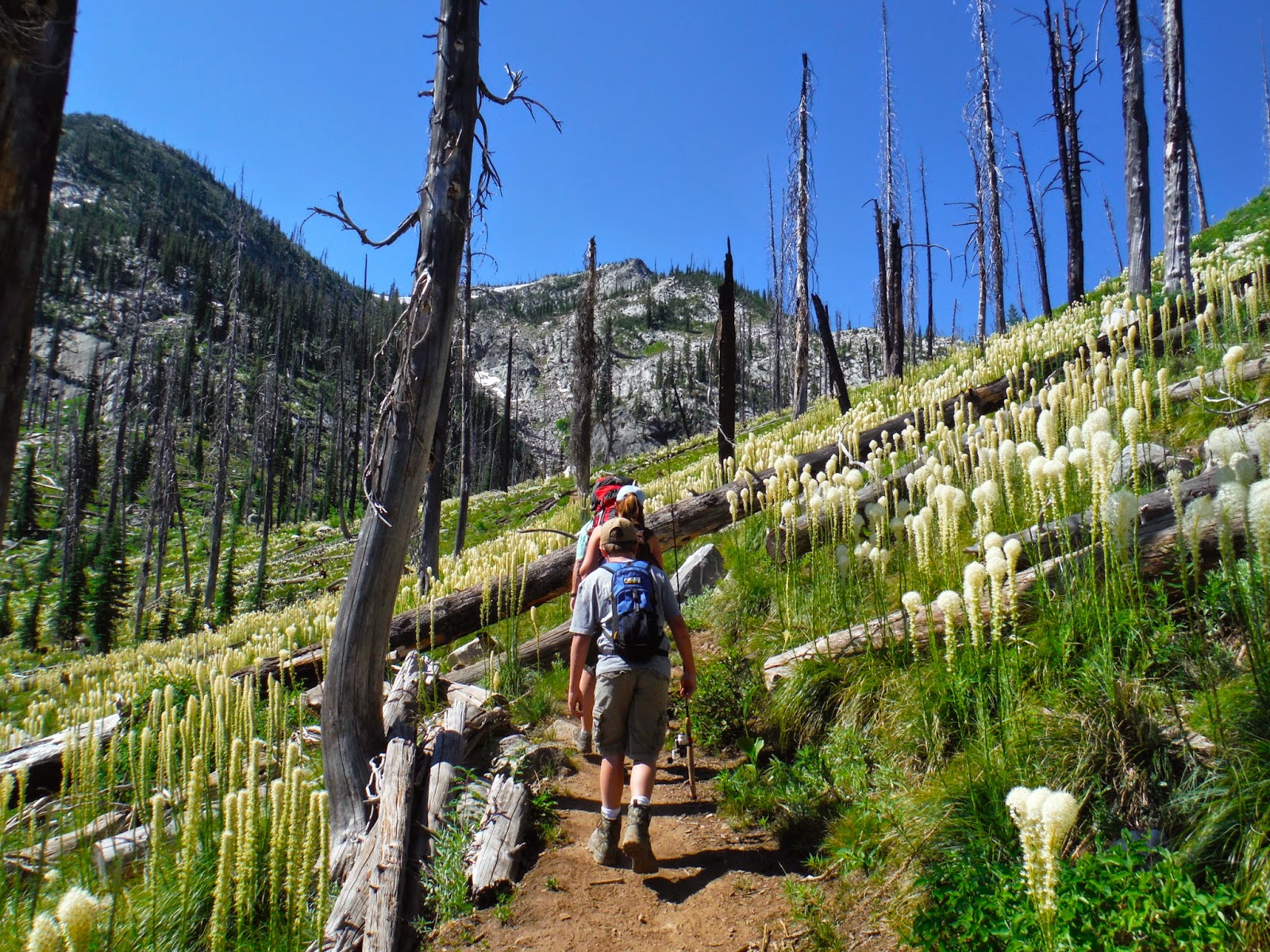 Blooming bear grass blanketed the hillside as Mike, Kerri, Gracy, Sam, and I made our way up.
“Sam, I hope you can catch a fish on a fly today!” I said, as we made our way.
“That would be cool.” Sam said, still bringing along his spinning gear just in case.  We were almost to the lake, but not before we had to squeeze underneath another fallen tree that laid over the path. 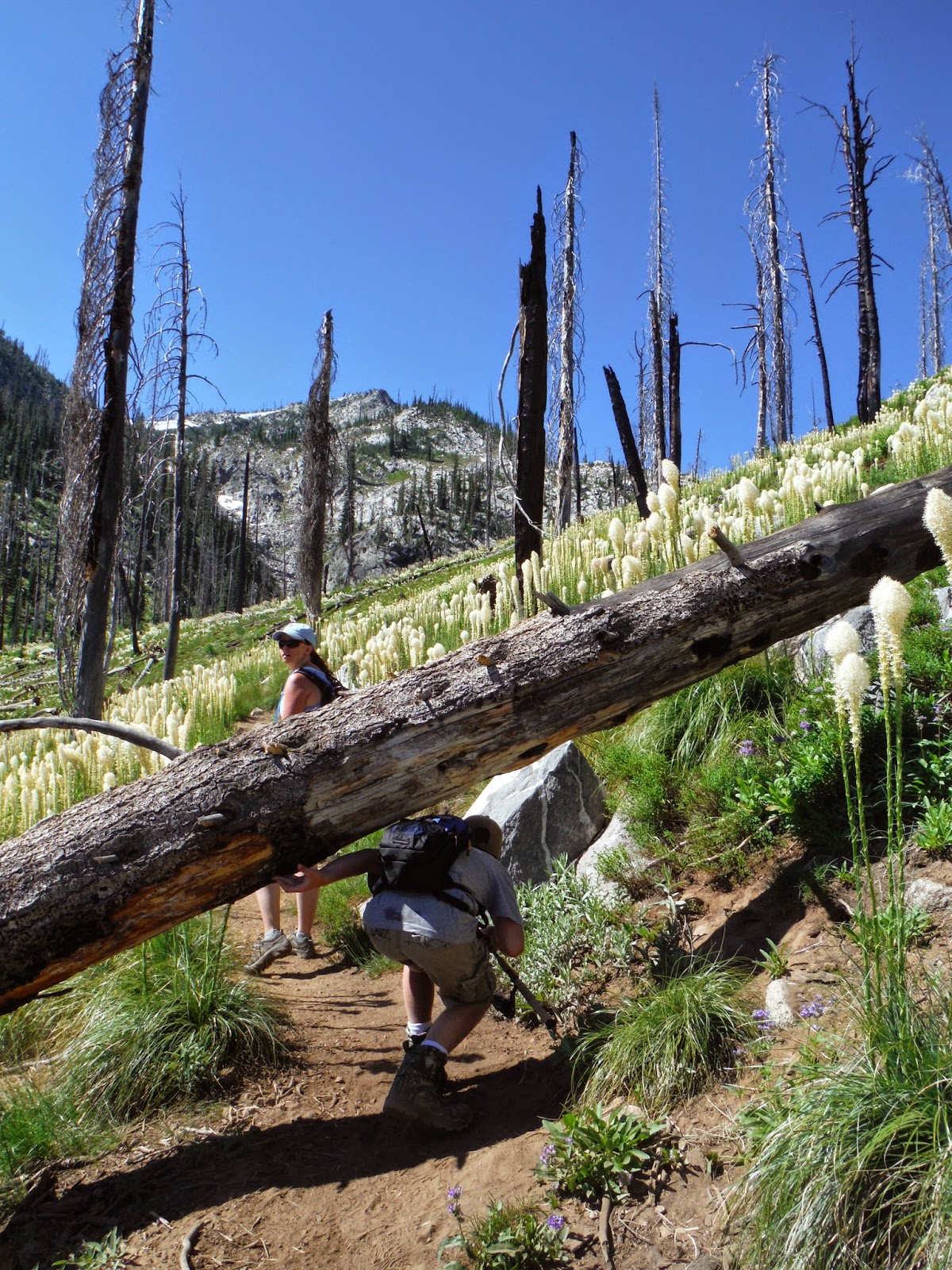 Sooner than I expected, we were at the lake.  Fallen timber crowded the shoreline, which is bad for fishing, but great for a picture. 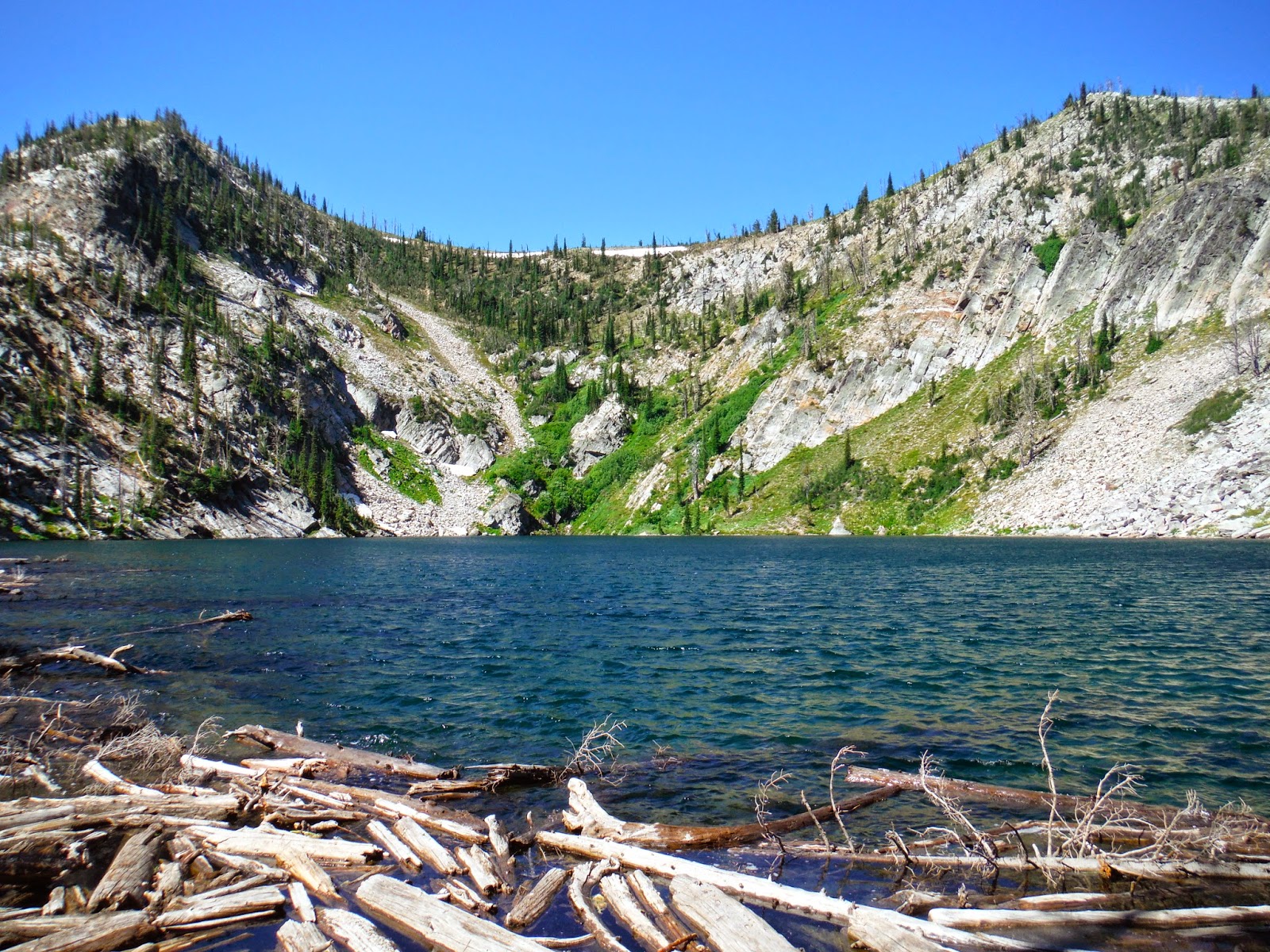 Being that it was Kiwi’s, aka Hawk Bait’s first alpine lake, Mike was kind enough to snap a picture of us. 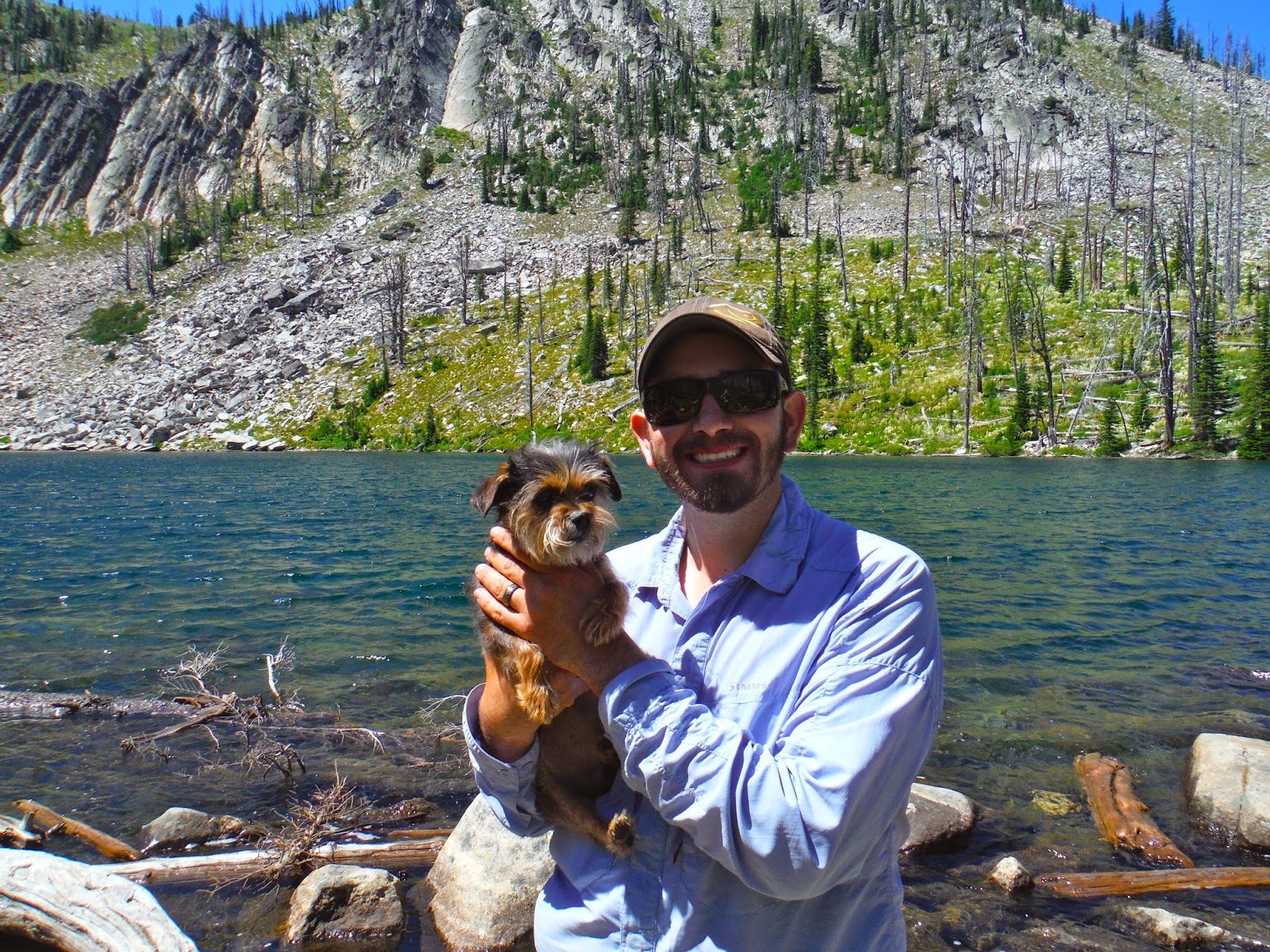 By the time I had strung up my fly rod Sam had already hiked around the lake where there were no fallen trees in the way, hopped on a large rock, and started making casts. Gracy and Kerry were nearby watching as Sam made cast after cast.  I had rigged up his spinning rod with a clear bobber that could be filled with water so he could fish with a fly. 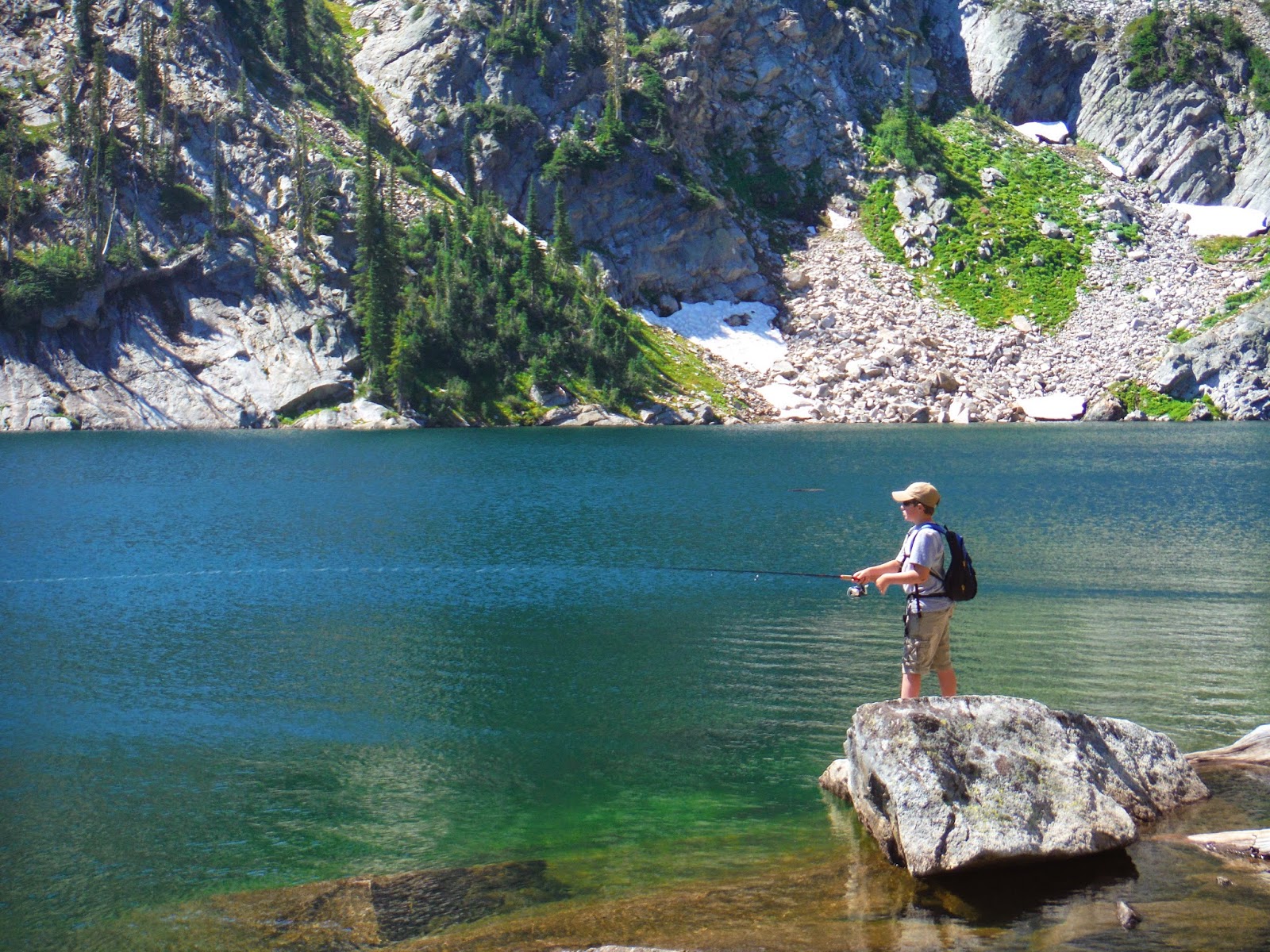 “Anything, Sam?” I called out.
“Nope.” He replied, keeping his eye on his fly.  Sam kept his fly still on the water, and the large hopper that was tied on was easy to spot.
“Give it a little twitch.” I suggested, and Sam did.  Twitching your fly on an alpine lake can sometimes be the ticket to attracting a fish to come up and eat it, but today it was not working.  I launched my fly near any structure I could find with no success.  Together, Sam and I walked the banks of the lake in search for a fish, leaving Gracy, Kerri, Kerri’s dog, Sadie, and Hawk Bait behind.  The only thing we found was Mike out in his float tube casting away. 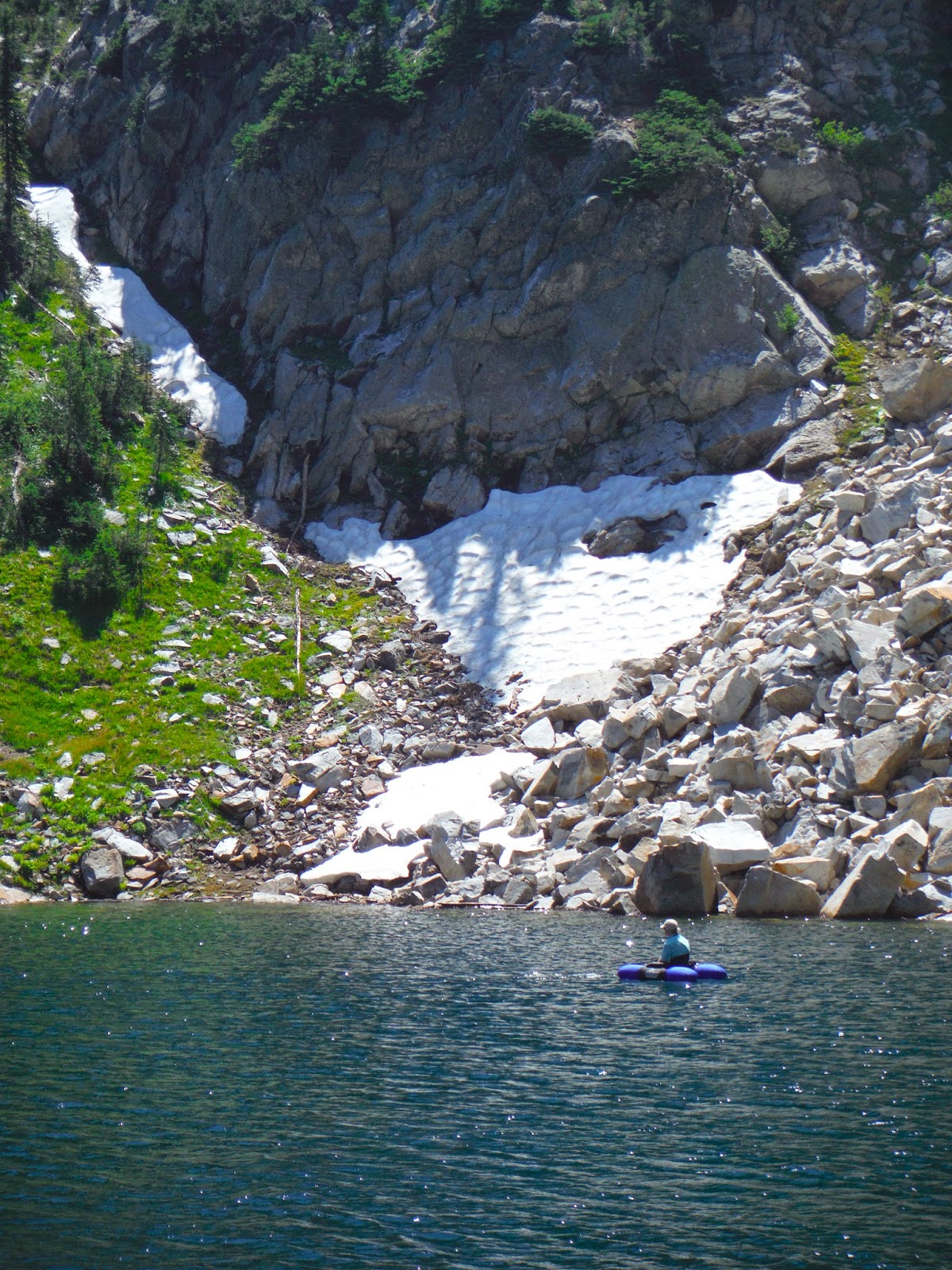 “Anything, Mike?” I yelled out to him.
“I have had two takes, but only brought one in.” He yelled back, adding, “It sure is fishing slow.”
With nothing happening for either of us, I decided it was time to switch Sam’s fly rig to a fast sinking jig.  It was, after all, more important for Sam to catch a fish, no matter how dirty we had to rig up. 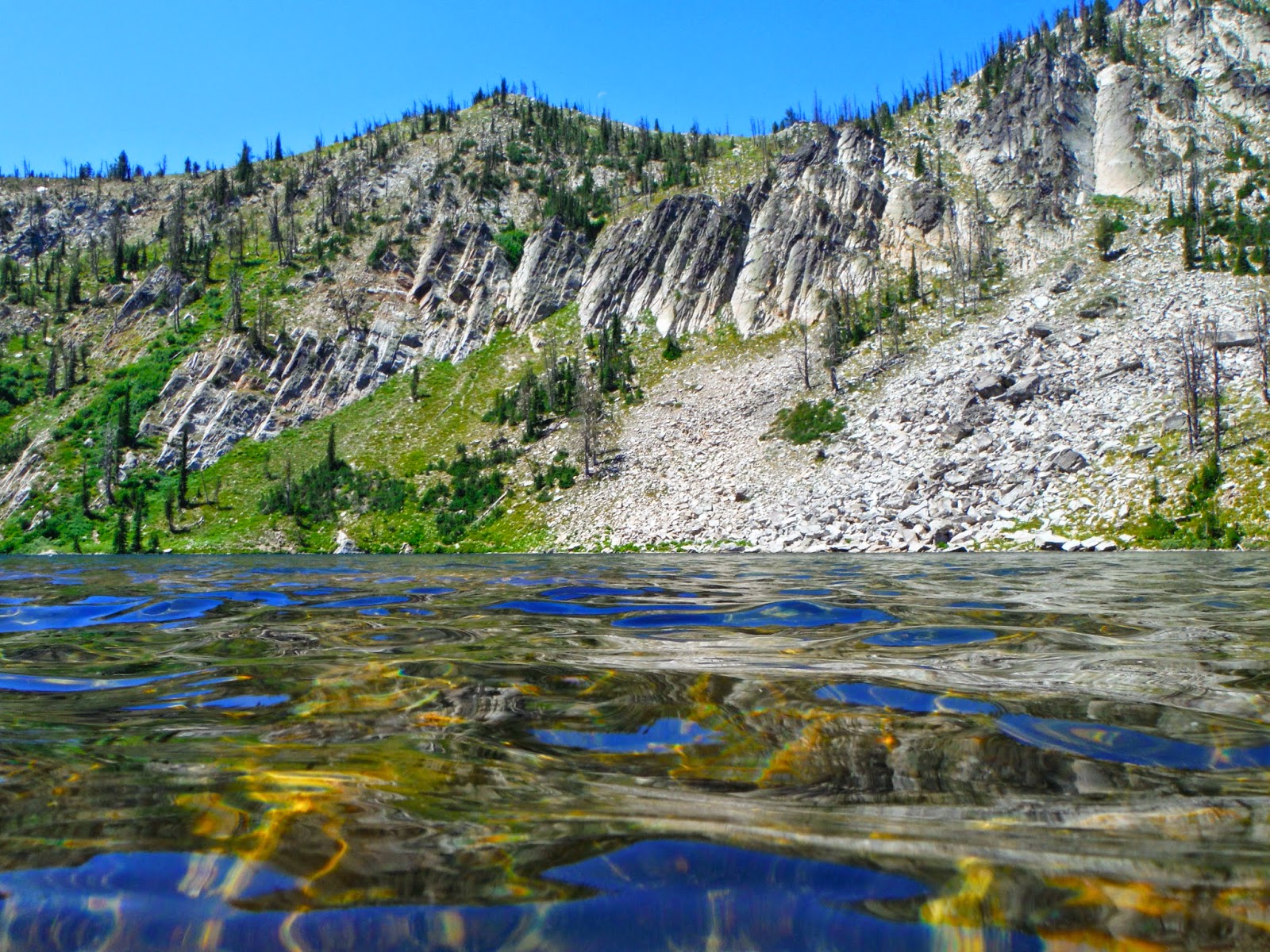 With no fish being caught, we decided to head back to where the ladies were sitting to eat our sandwiches.  Mine looked especially delicious; I had snuck some extra pesto on my bread when no one was looking and had been looking forward to it all morning.  My excitement was short lived.  Something had gone terribly wrong in Sam’s pack.  His water bottle must not have been tighten down enough, because when he brought his sandwich out, it was completely soaked in water.
“Oh noooo!” Gracy said, checking out what went wrong in Sam’s pack. The ziplock bag had not been completely sealed and the leaking water had seeped in.
“It’s okay!” Sam said happily, “I can still eat the meat.”
Gracy’s eyes met mine, and I could tell she felt terrible. I felt bad too, but the only one who didn’t was Kiwi, who sat by waiting for scraps. 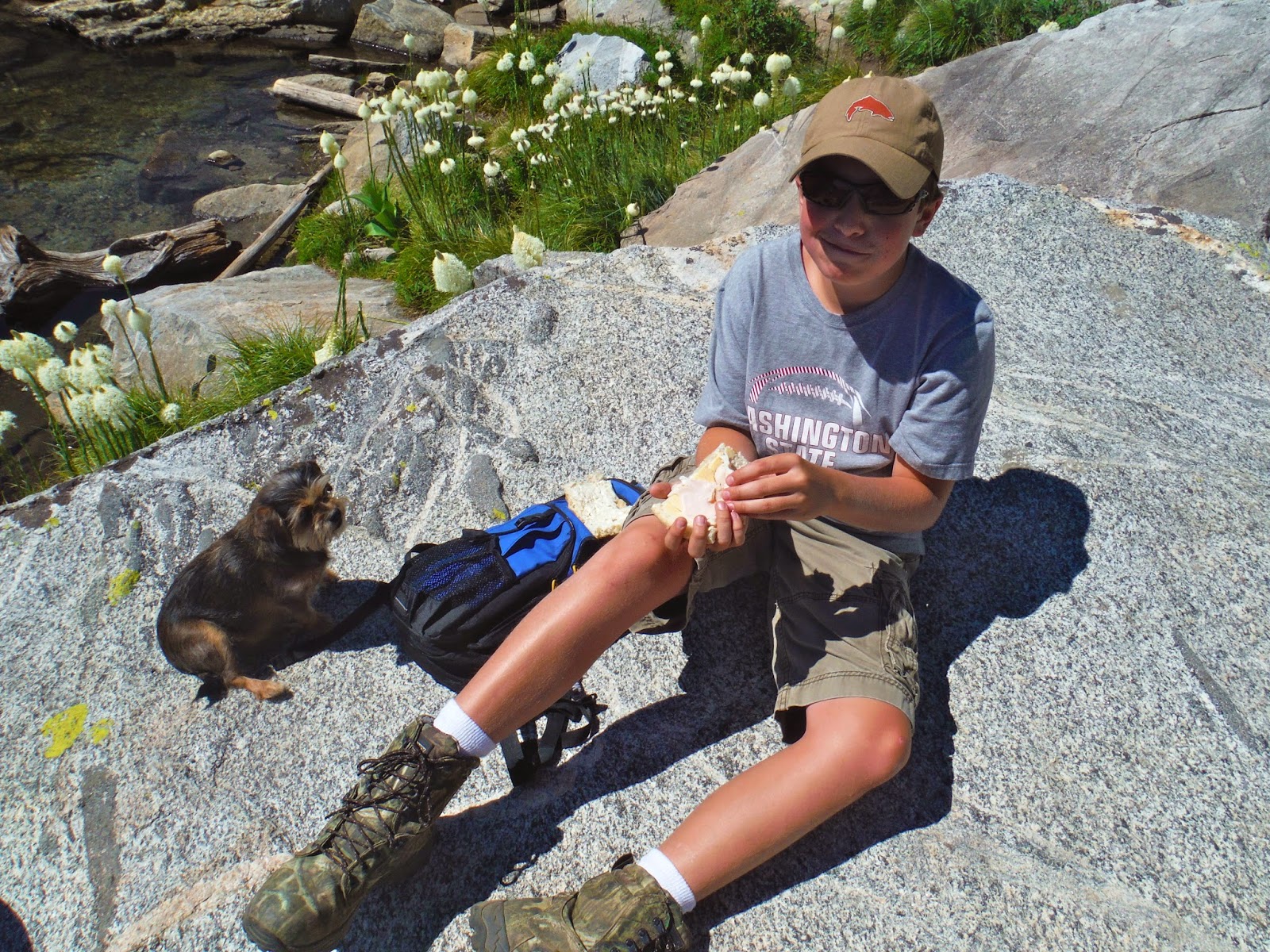 “Take half of mine, Sam.” I said, handing half my sandwich to him.
“No, I’m ok.” Sam insisted, but I wasn’t buying it. Gracy offered her half as well, but Sam still refused.
“Take some Sam, it has lots of pesto!” I said, hoping that would inspire his decision.
“I don’t like pesto.” Sam said, making me now feel bad that I had caked my sandwich with it.
“Well then you are in charge of the peanut M&Ms!” I said, holding up the bag.
“I’ll take those!” Sam said with excitement, and I tossed over the bag. 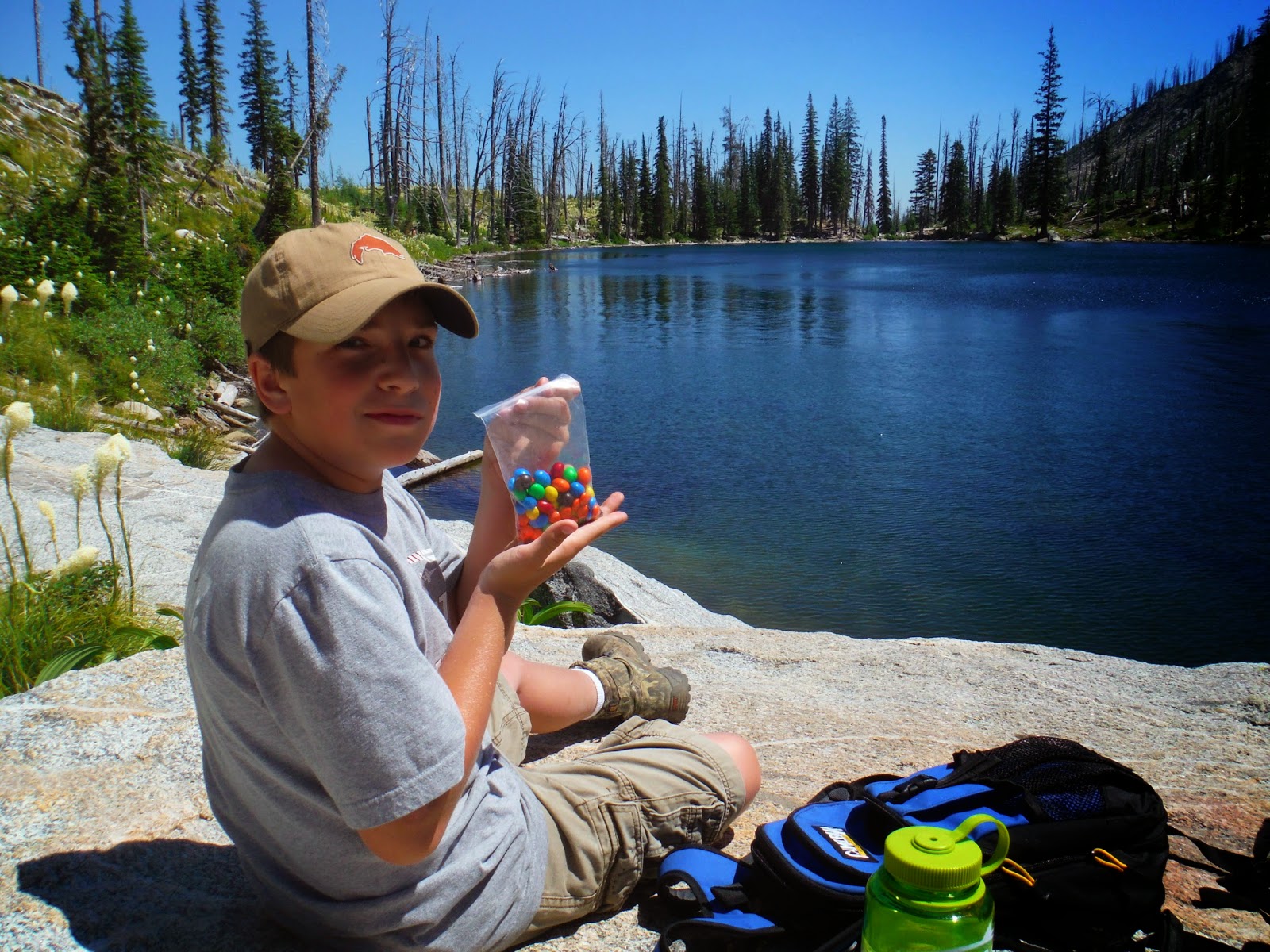 Despite Sam’s drenched sandwich, there was plenty of other food to eat.  Jerky, cheese, crackers, M&Ms and more were packed in our bags, and Sam had his fill. 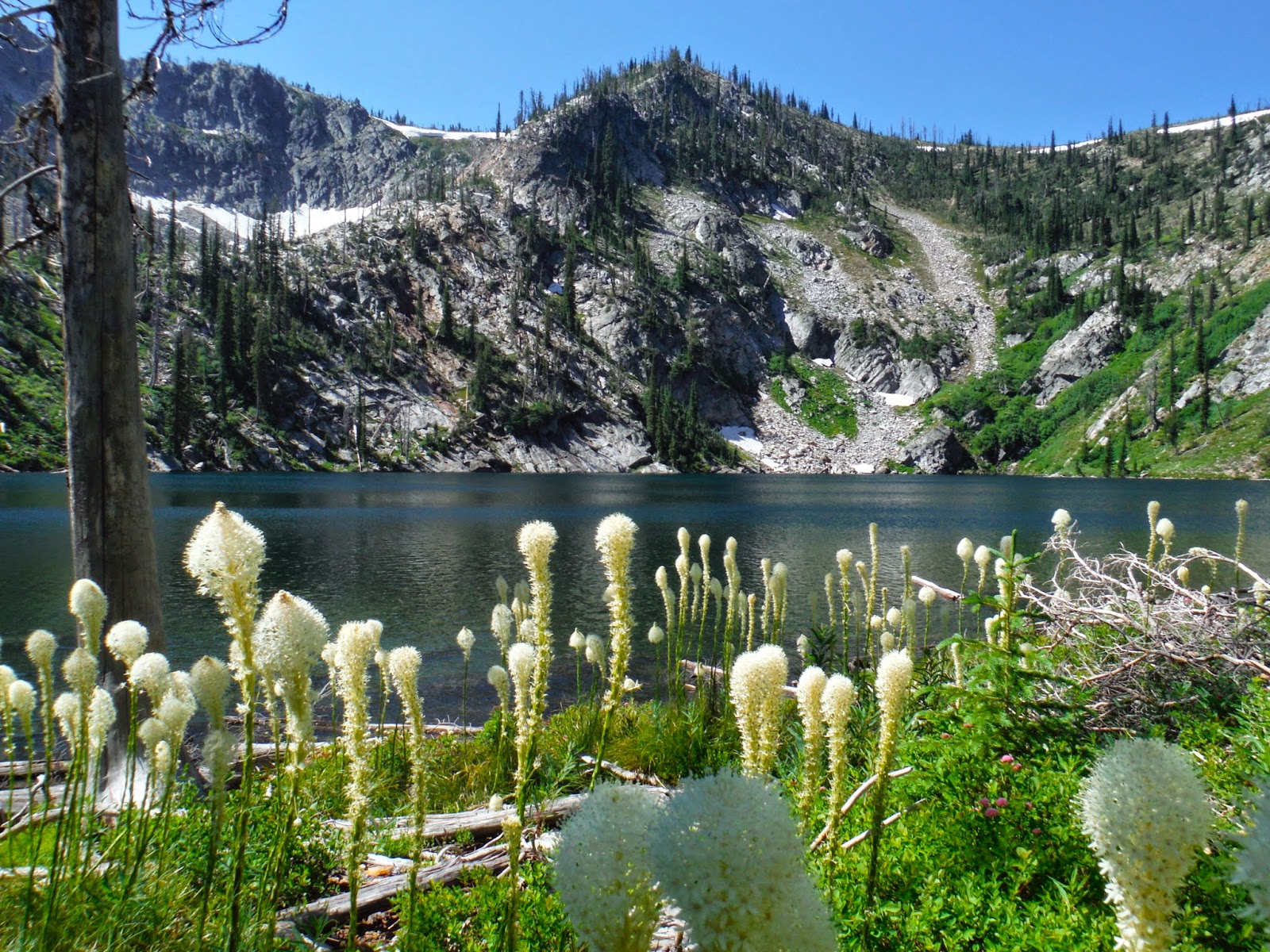 After lunch, Sam and I hiked around the other half of the lake and fishing along the way. 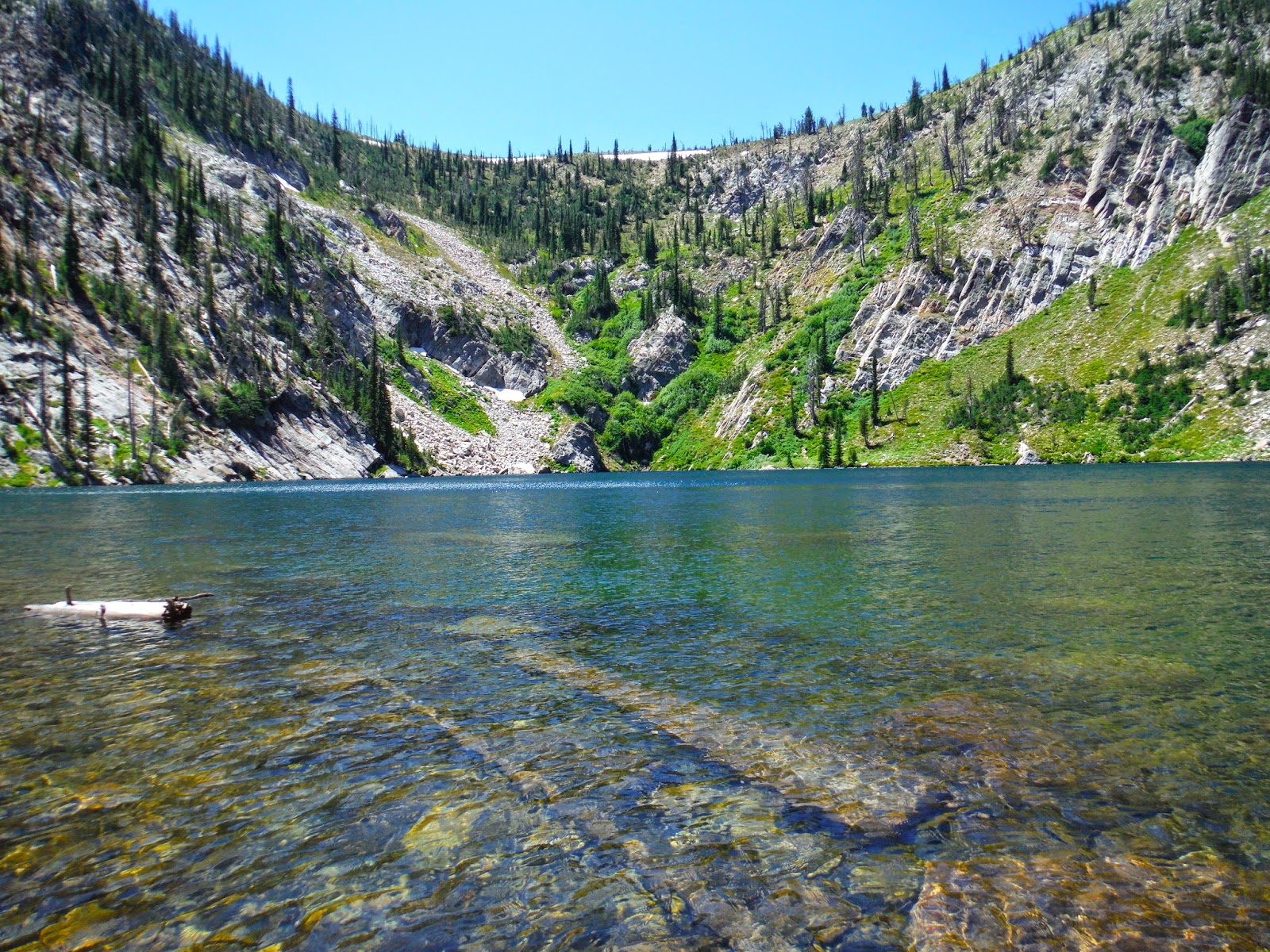 I did see a few fish rise, but they were too far out in the lake for me to cast to.  The wind had really started to blow, and Mike started to make his way back.  Gracy and Kerri hiked over to join us, and Sadie and Kiwi followed. 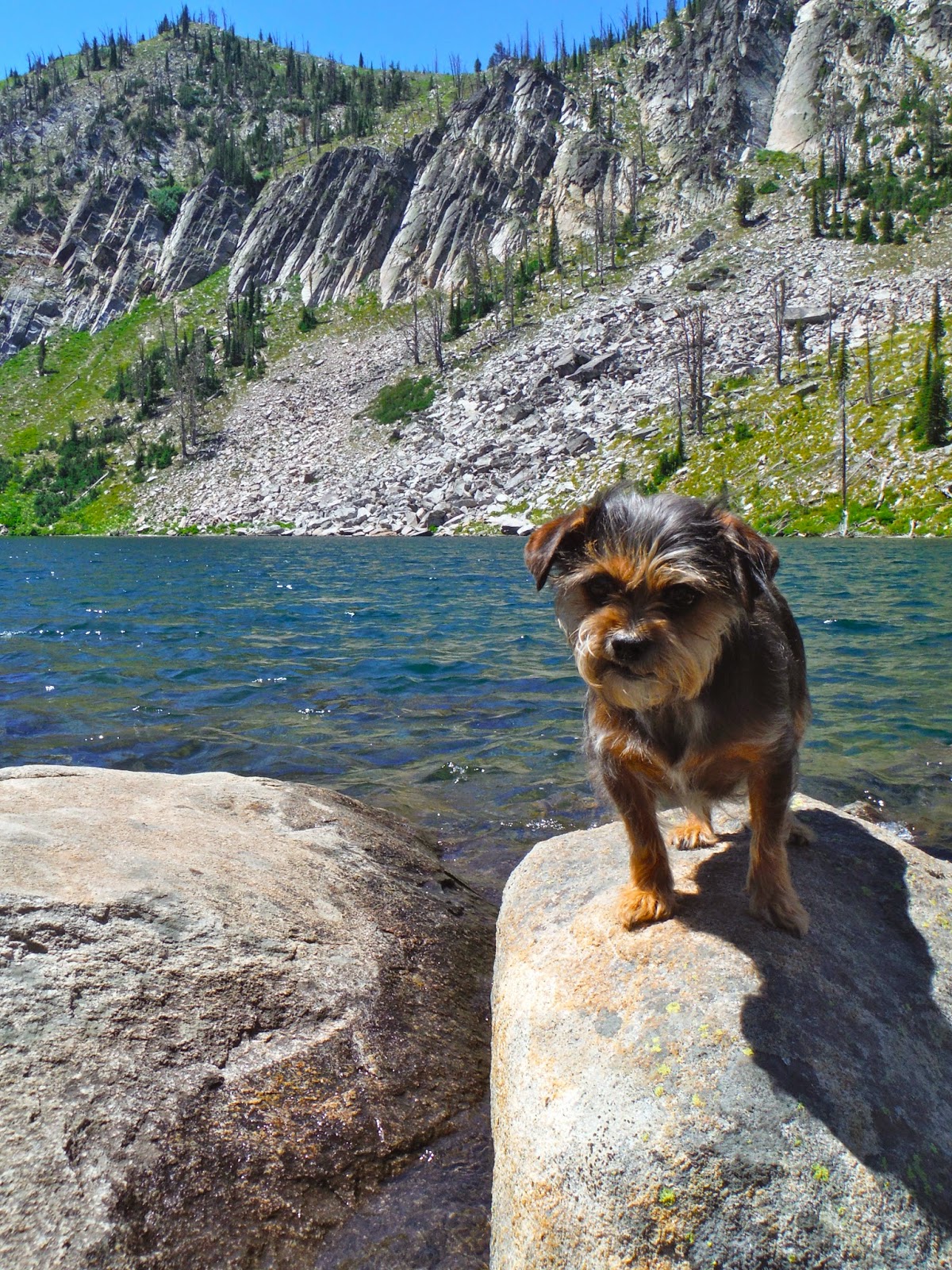 We geared-down earlier than expected for the day.  The fish were not rising, and the wind had really started blowing.  We all sat and ate a few more snacks before heading back to the truck. 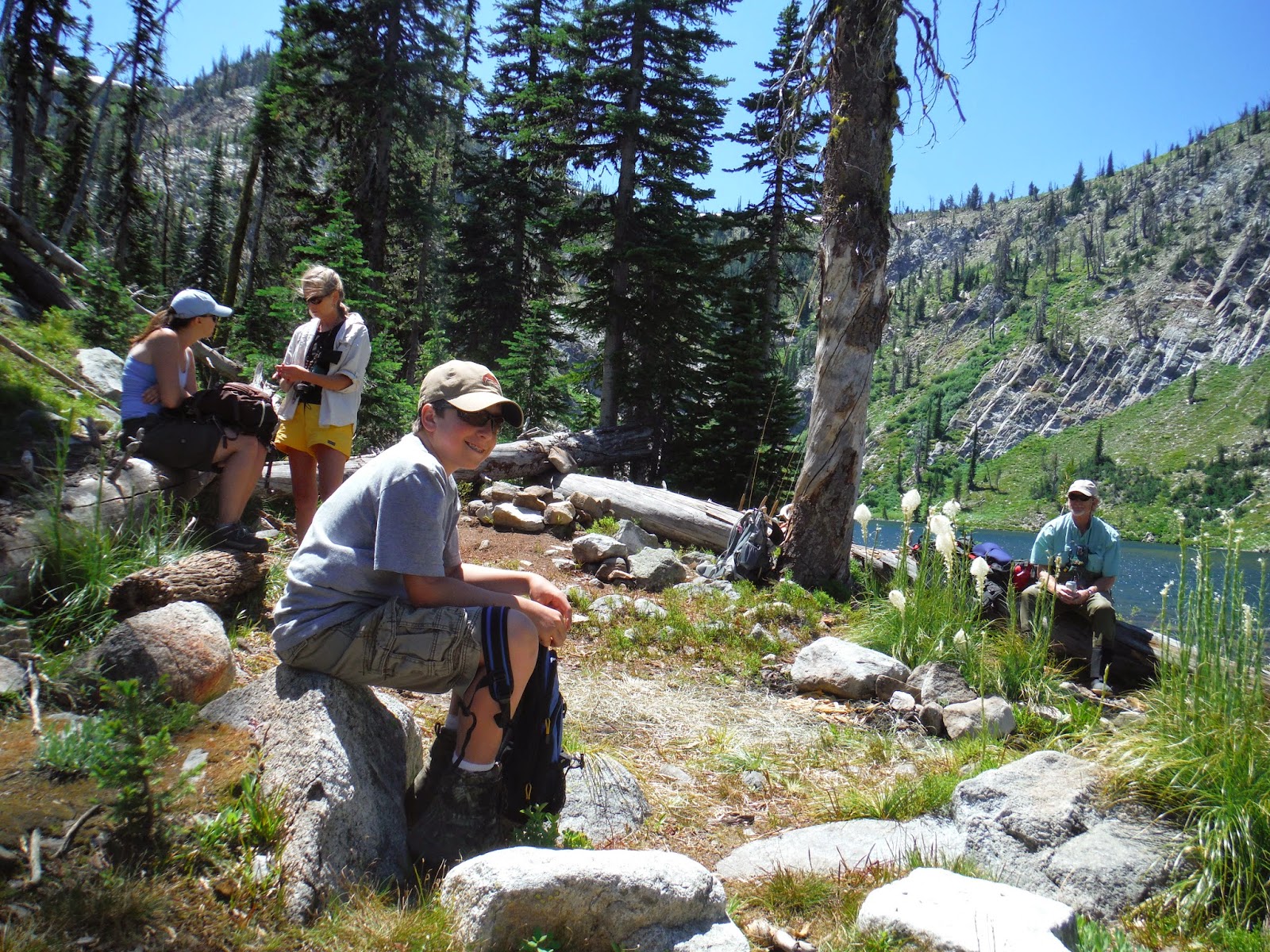 On our way back, Kiwi took the lead, as Sam, Mike, and Gracy followed.  I stayed behind with Kerri, who was taking the hike back down slow and carefully.  Her recent knee surgery was healing fast, but downhill can still take it’s toll on a sore knee.
“Hey, pine tips!” I said, as we came across a small pine tree.
“I want one.” Kerri said, as we both plucked ourselves a pine tip and ate it.
“I wonder if the young bear grass is eatable.” Kerri said, “It looks like small corn on the cob.” 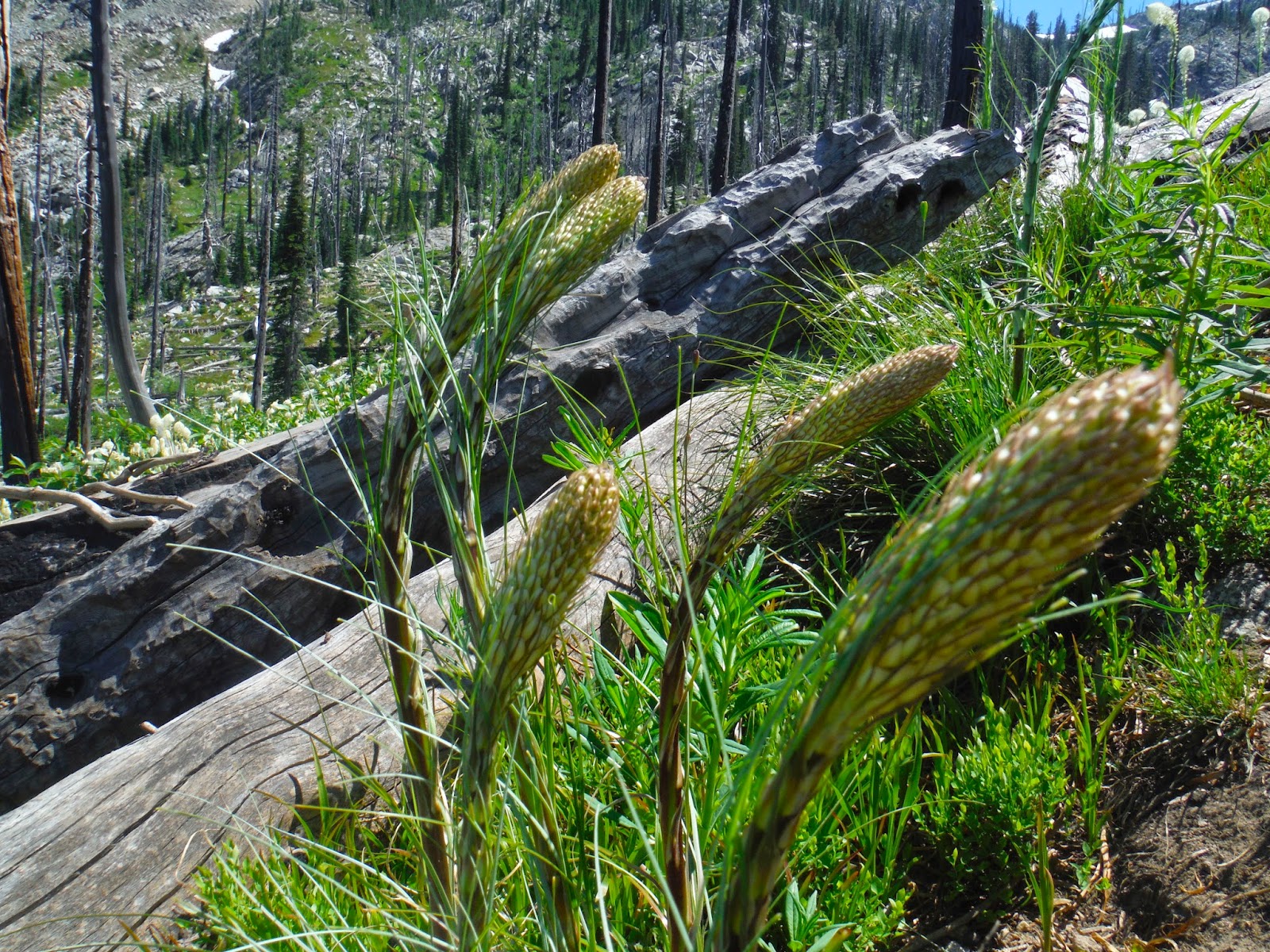 We found some young bear grass on the side of the trail, and Kerri plucked off a small piece and ate it.
“Does it taste like corn on the cob?” I asked.
“No.” She replied, “It taste more like the pine tips, only not as sweet.”
“Soooo, it tastes like a weed?” I asked.
Kerri laughed, “Yeah, I guess so.” 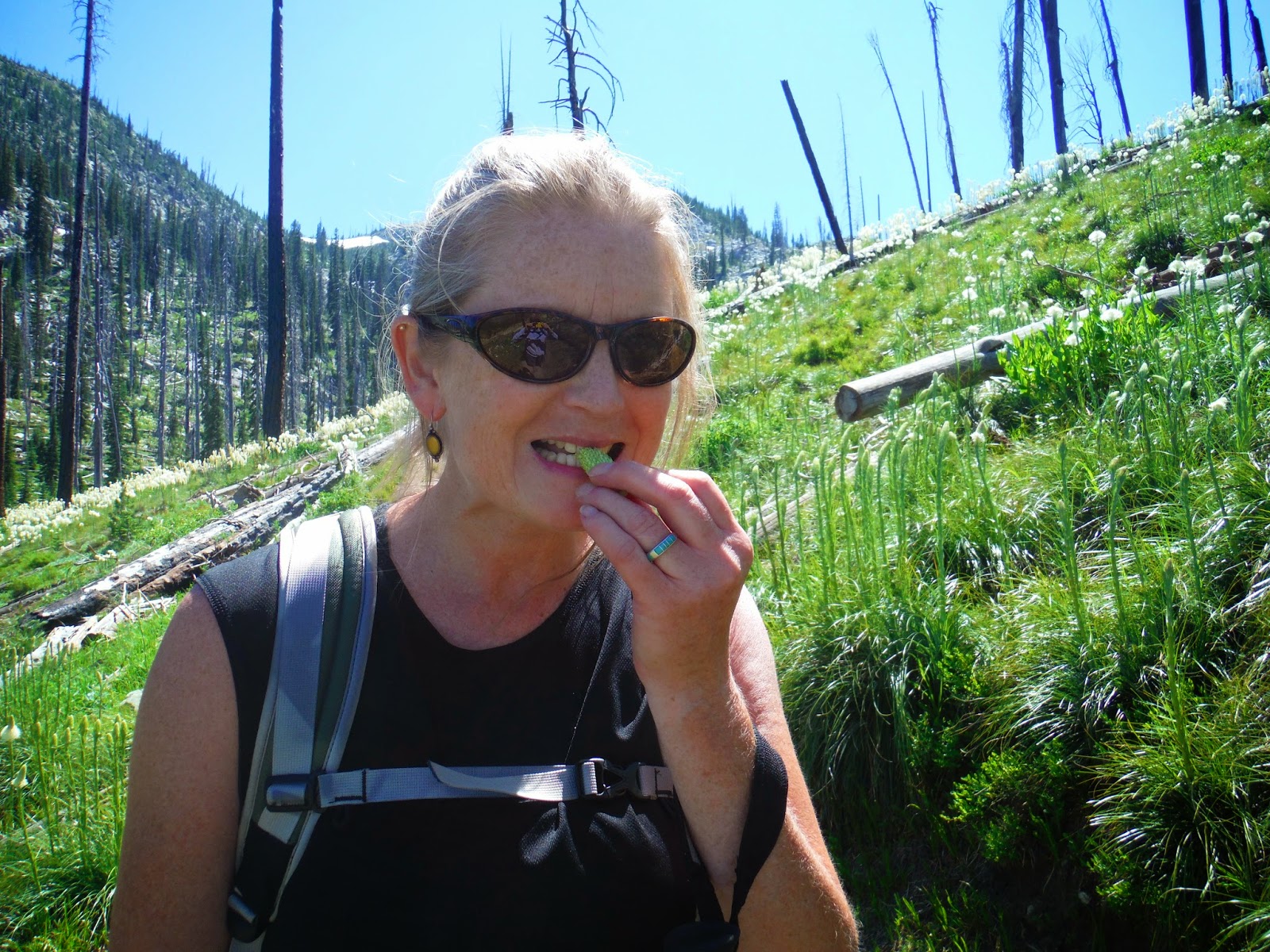 We made it back to the truck in no time at all.  Kiwi and Sadie were tuckered out, and were both happy to rest.
“My first skunked alpine lake experience.” I said, as we gathered in the truck.
“It was bound to happen.” Mike reassured.
“Sorry we didn’t get any fish, Sam.” I said.
“It’s ok.” Sam said, “It was just nice to be out here.”
Mike smiled at Sam’s comment, “With that kind of attitude, it sounds like Erik had a new fishing buddy!”
I looked back at Sam and said, “Yes I do!”
Sam smiled, and we made our way back to McCall before heading home. 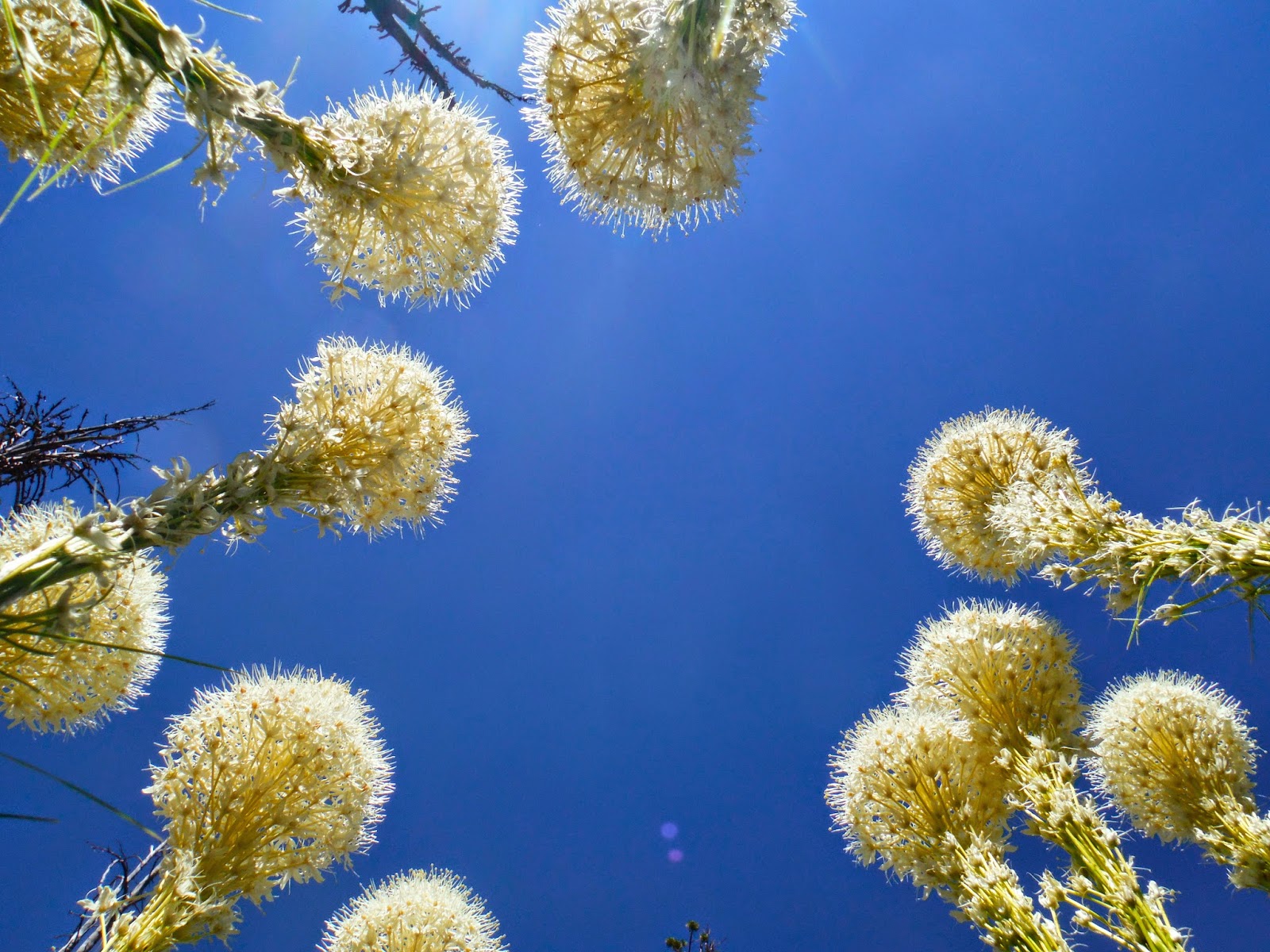 3 thoughts on “Adventures With Hawk Bait”