Skip to content
Upon arriving at the road to the day’s alpine lakes, it was clear that the Idaho Forest Service did not want anyone using the roads anymore.  Large tree stumps littered the roads, along with boulders the size of small cars that blocked the way. 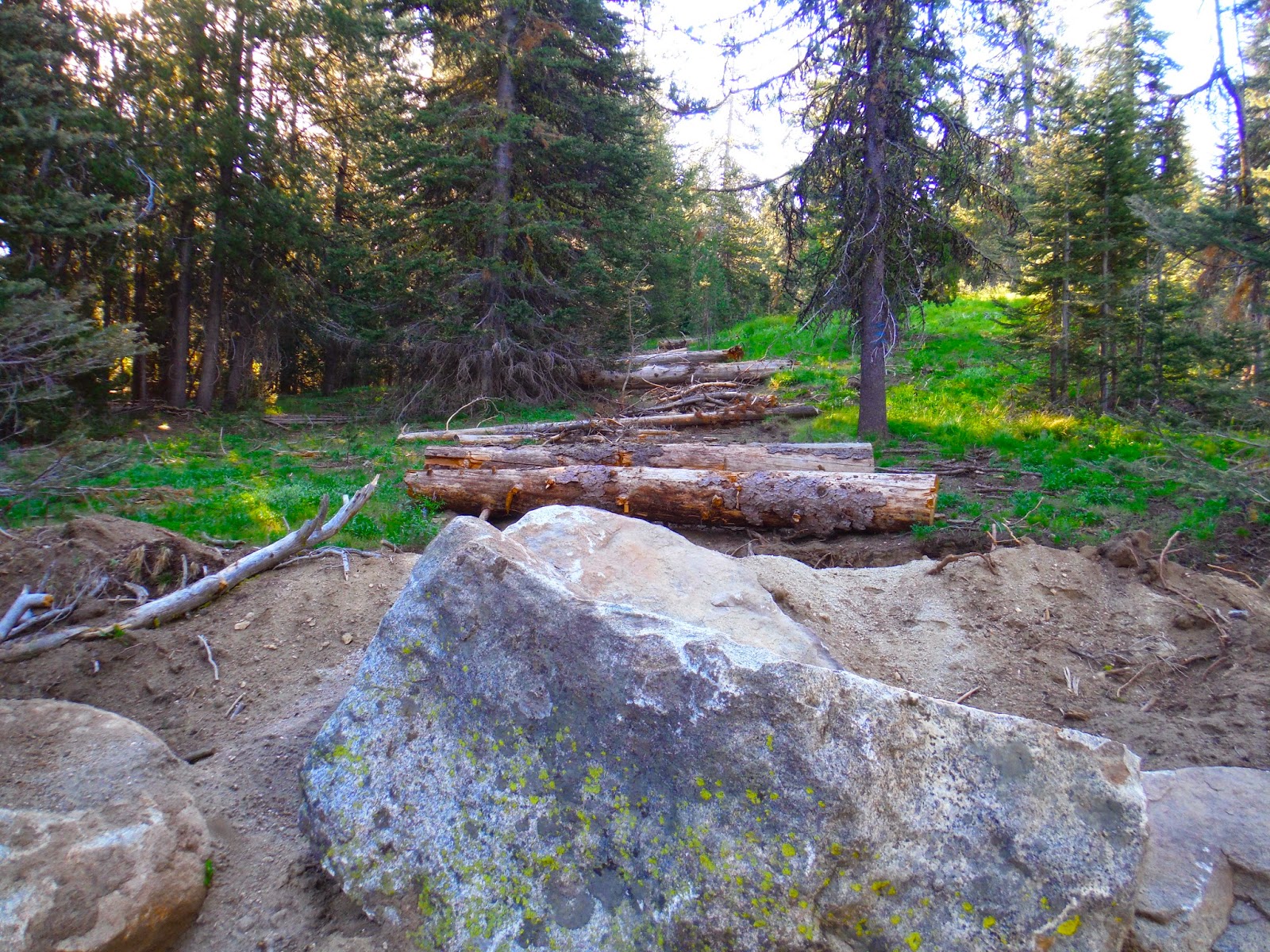 The only way I knew how to find these lakes was to bring along an old tattered GPS unit I call… Mike McLean. 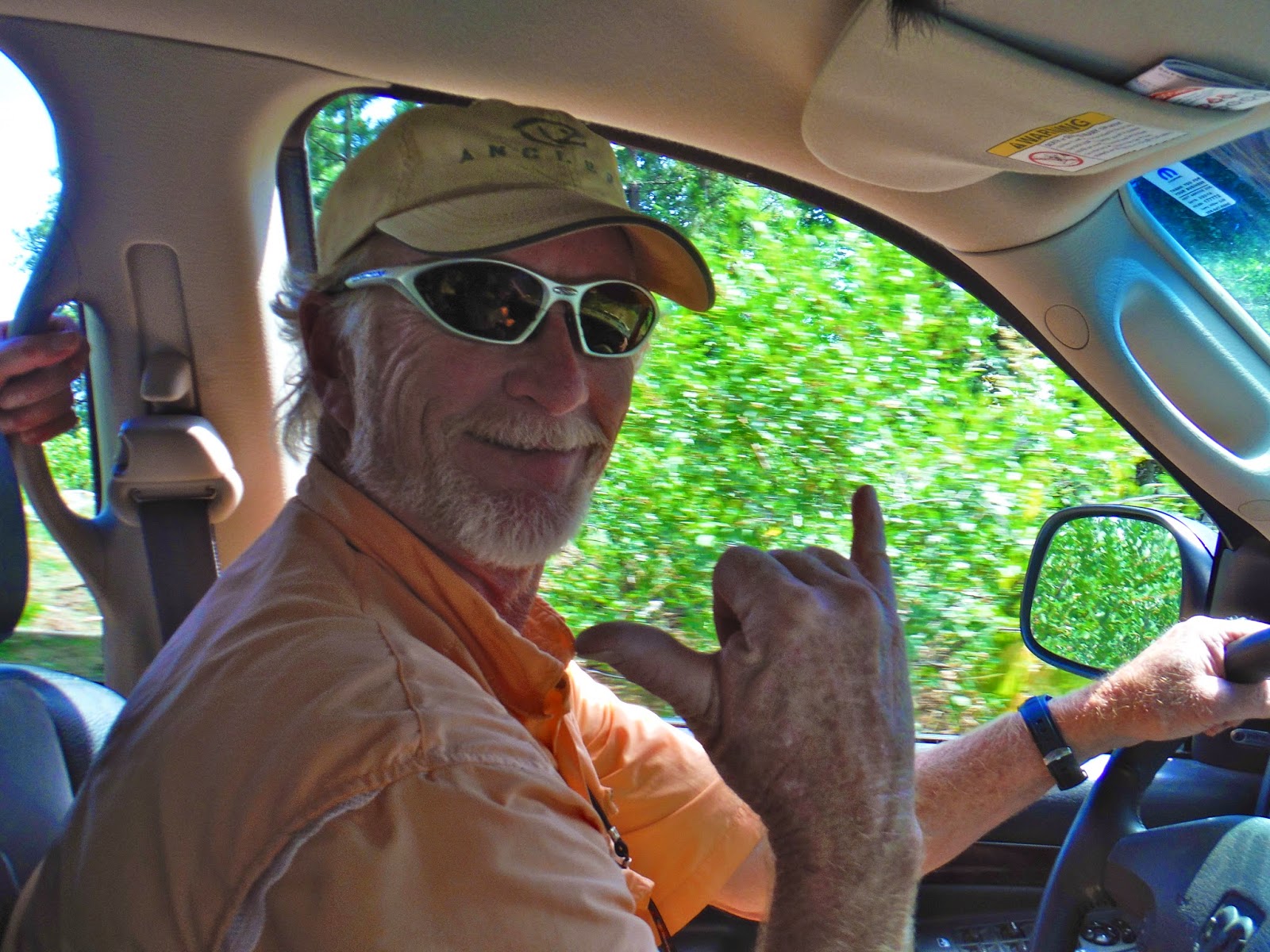 “The Forest Service did a number on these roads.” Mike explained. “For whatever reason, they blocked the newer routes up to the lakes, and if you had new hiking books you would never find them. Luckily, I know the old way.” Mike finished off, turning on a small dirt road with grass growing in the middle. If you asked me, I would have figured the road was meant for ATVs, but Mike drove up, confident as ever. 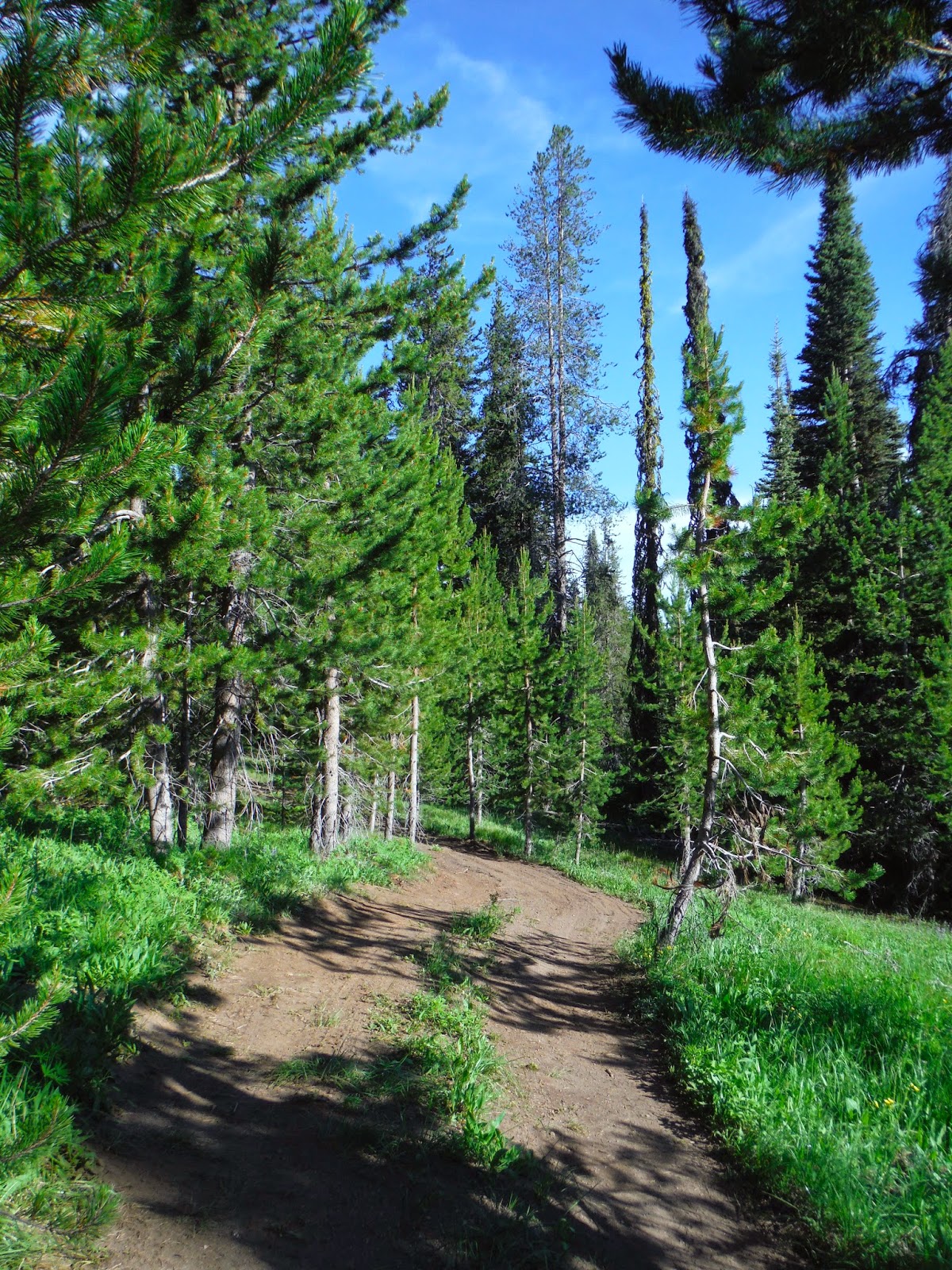 “This is it!” Mike said, as he parked and we geared up to start walking.  We were no more than three steps on our adventure when we heard a phone ring.  Hearing a phone ring in the middle of the river, forest, or lake is a no no, and can sour the day for even the kindest angler.  We all stopped and looked back at Kerri, Mike’s wife, who looked as if she had committed the worst crime.
“Geez, Mike. You’ll bring anybody up hiking with us.” I said, looking at Kerri.
“Tell me about it…” Mike replied. 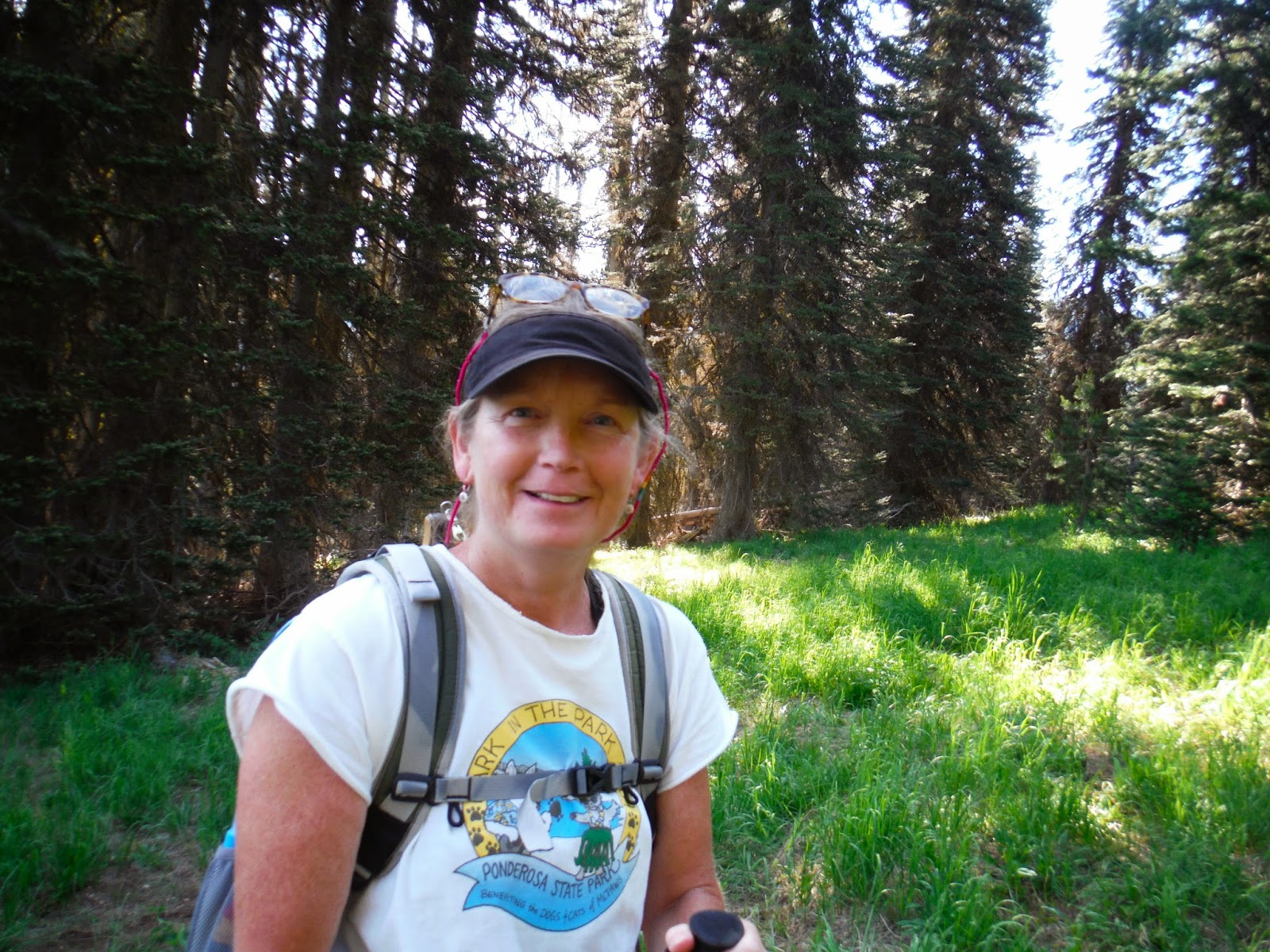 It was evident that the Forest Service had done work up here, not only on the roads but on the trail up.  An easy-to-follow trail next to a nice runoff stream had all been maintained; it made for an easy walk up. 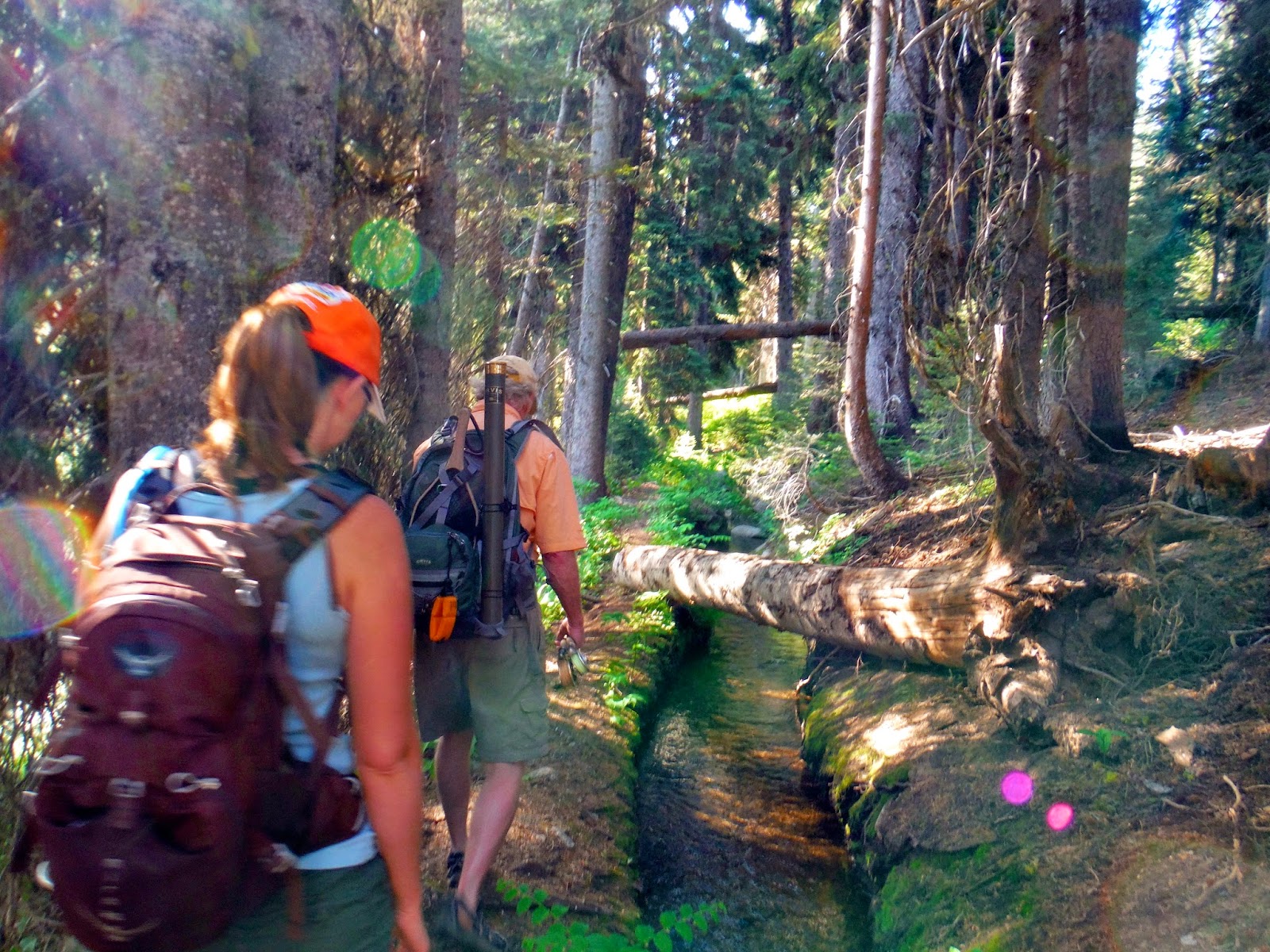 “Look, some bear grass.” Kerri said, pointing to a puffy looking flower.  The long stem only blooms in the late spring and early summer, and it was my first time seeing it looking so nice. 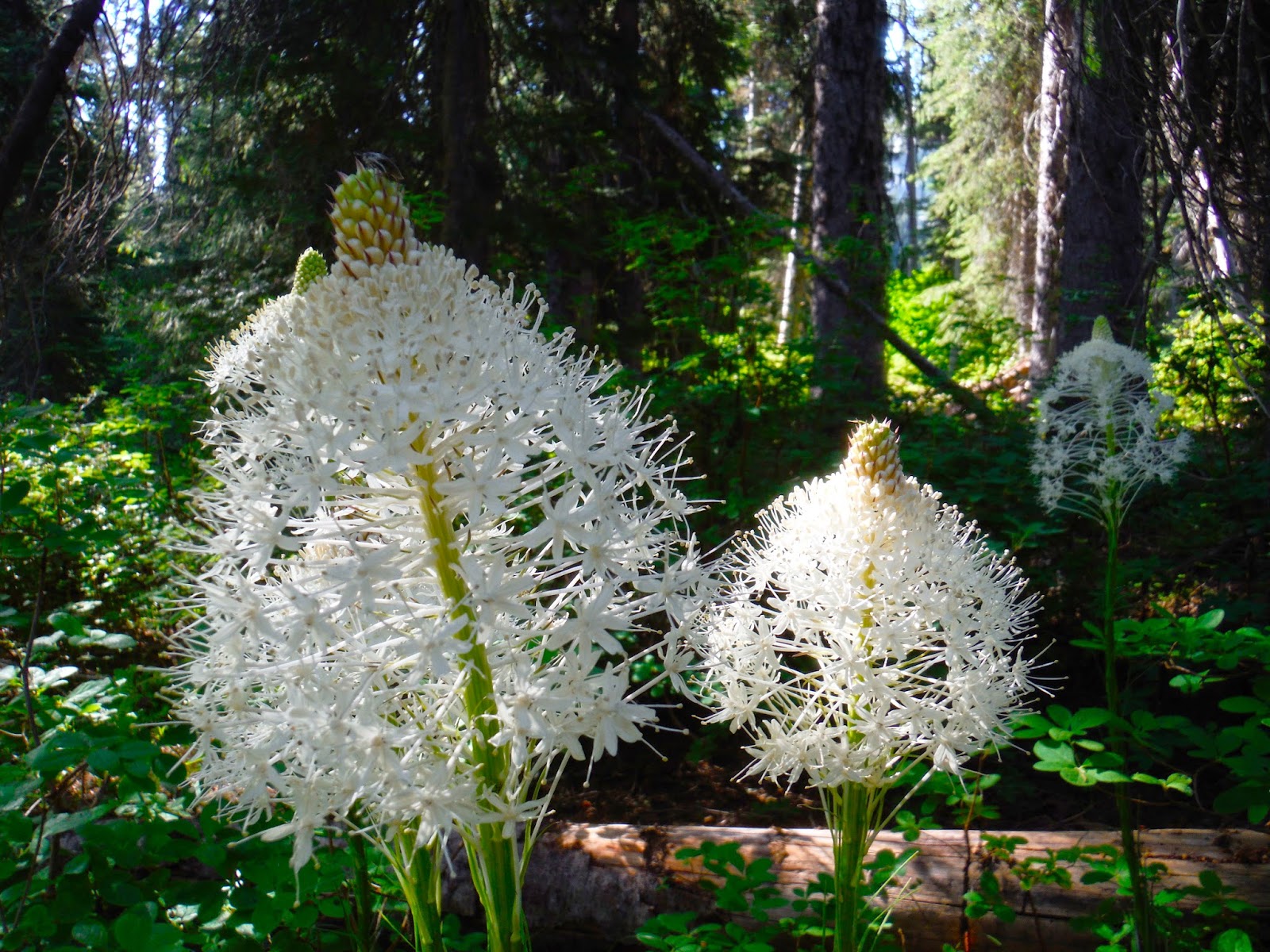 The hike was shorter than I thought it was going to be, and at first sight of the lake I immediately starting rigging up my rod. 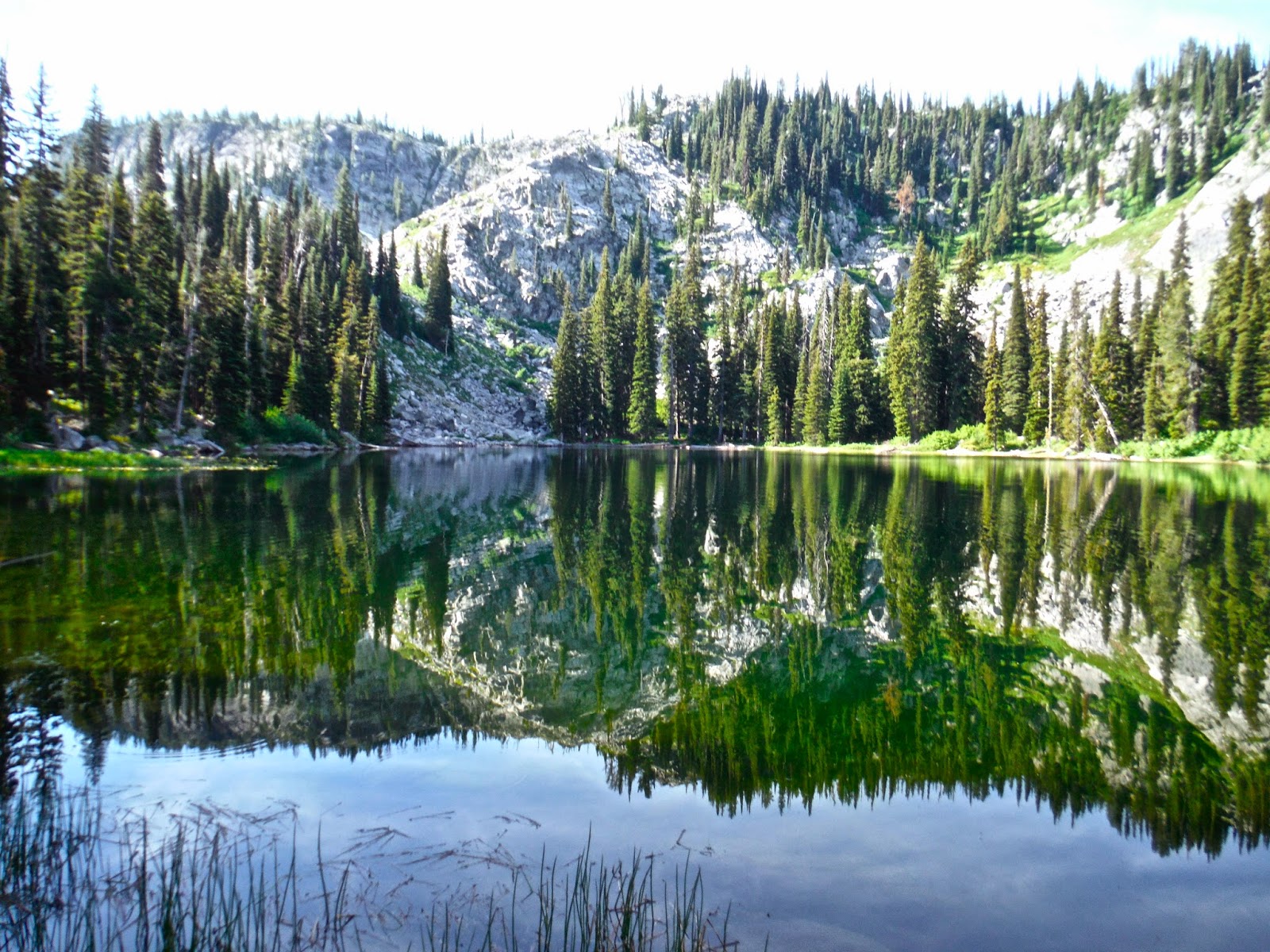 “He wants to be the first one to catch a fish.” Mike told Kerri, as he slowly tied his fly on.  Mike knew me too well, and I was the first one to cast my fly in the lake, but not the first one to catch a fish.
I hiked my way around the lake with little luck.  The fish I got to take my fly shook me off quickly, and the decent fish I did bring in got away right as I was about to grab it for a picture.
“Let’s hike up to the second lake. This one usually fishes better around 2 o’clock.” Mike said, and up the hill we went.  The steep hill to the second lake was short lived, and when the lake came into view, it was fantastic.  I stood there for a minute.  The rich smell of pine filled the air, along with the delicate hint of fresh water. Together, they made a fragrance no candle could reproduce.  A fish rose within casting distance, tearing me from my trance. 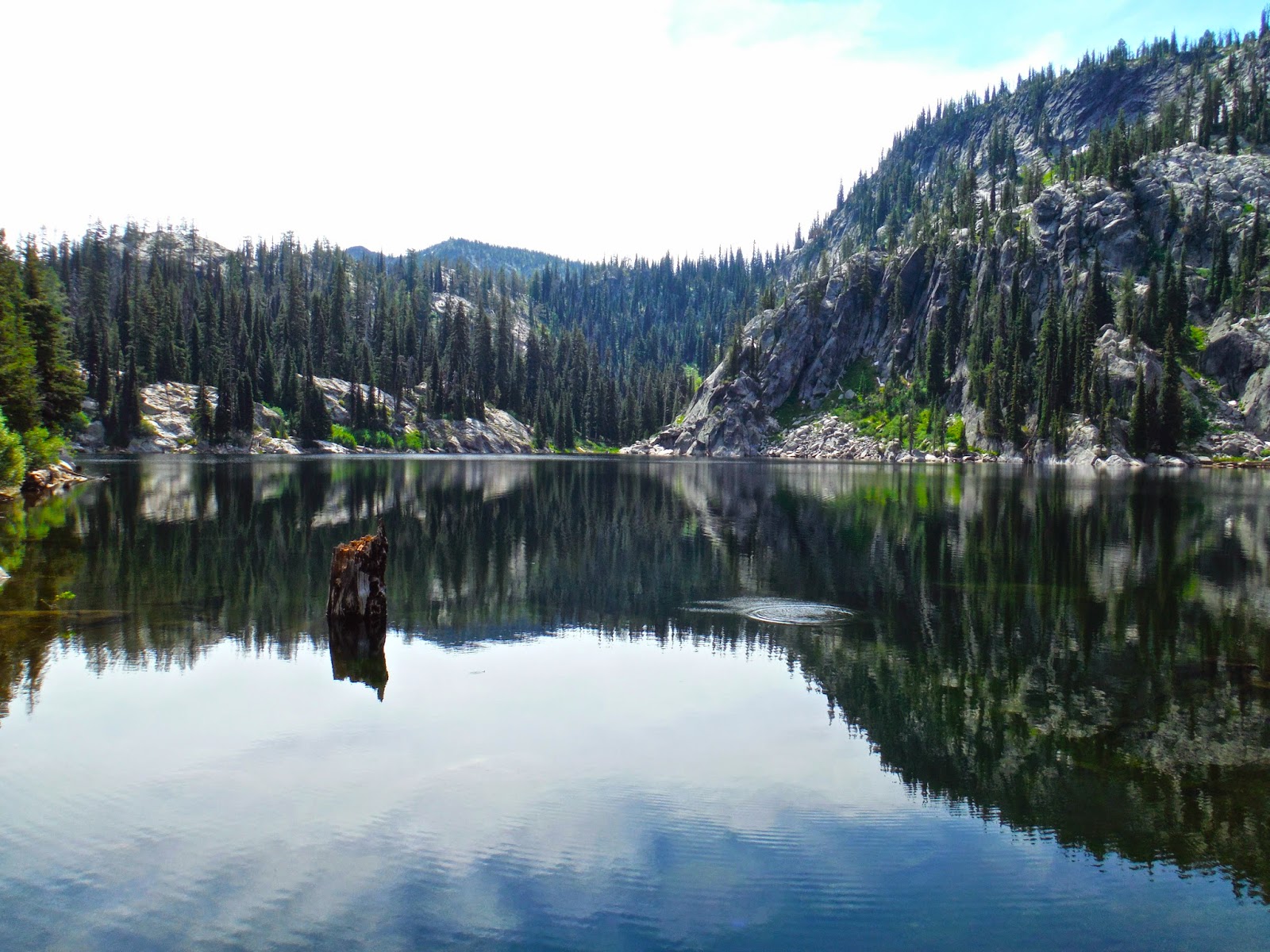 I roll-casted my little green beetle and it was slammed almost immediately.
“You already have a fish?!” Mike said to me, as the cutthroat fought to get away.
“How long did you want me to wait?” I said with a smile. 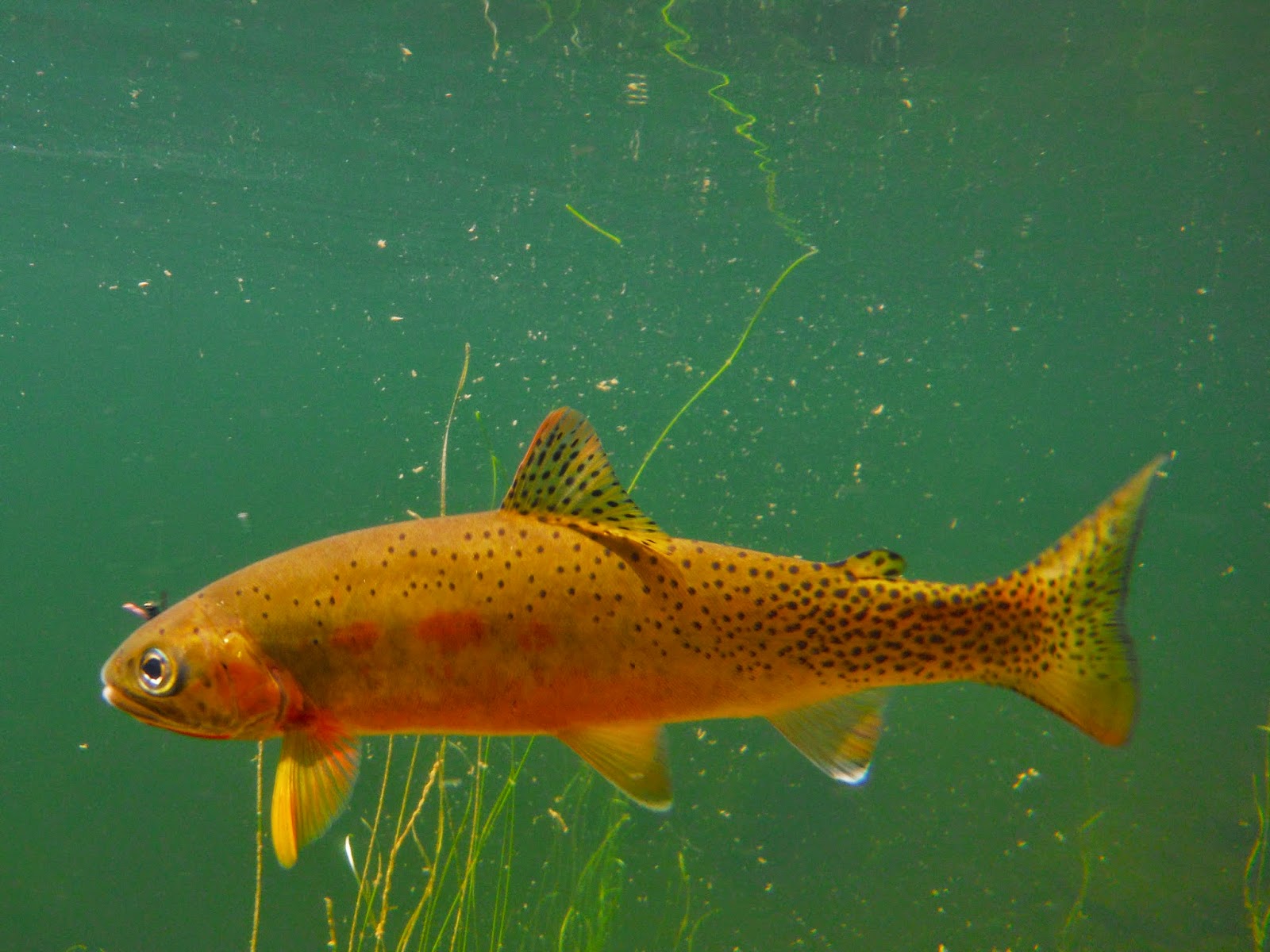 The cutthroat were cooperating nicely.  Just about every cast ended up being taken by a colorful fish. Both Mike and I started walking around the lake, stopping at openings to cast.
“You got another one?” Mike observed, fishing about 50 feet away.
“They are loving this little green beetle. Do you want one?” I asked.
“I have a few flies I can try.” Mike said, continuing to cast.
“Dont be a hero, Mike.  I have more of these beetles if you want one.” I added, then walked over to the fallen tree that separated us, and stuck a green beetle on the stump.
“There you go, Mike.  You can grab this whenever you decide you want to catch a fish.” I said. And after I caught another fish, Mike found his way to the beetle and tied it on. 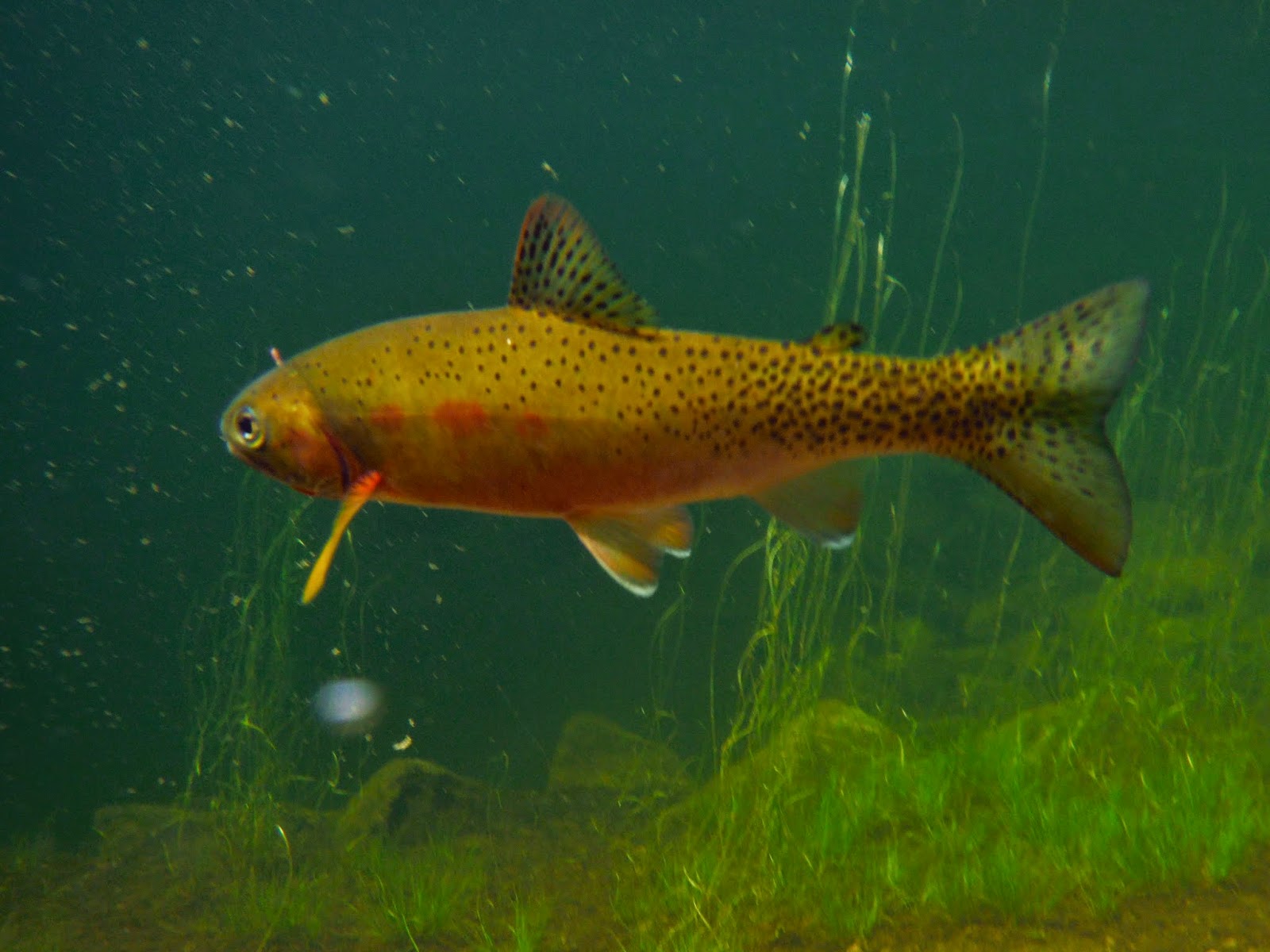 It was past lunchtime, so we headed back to where the ladies were sunning and ate our sandwiches before deciding to head back to the lower lake.
“How did that beetle work for you, Mike?” I asked, as we started to head back.
“I ended up losing it in a tree on my second cast.” Mike said, adding, “I did catch a fish though!”
“That’s good.” I said, and quickly headed down the hill, back to the first lake. 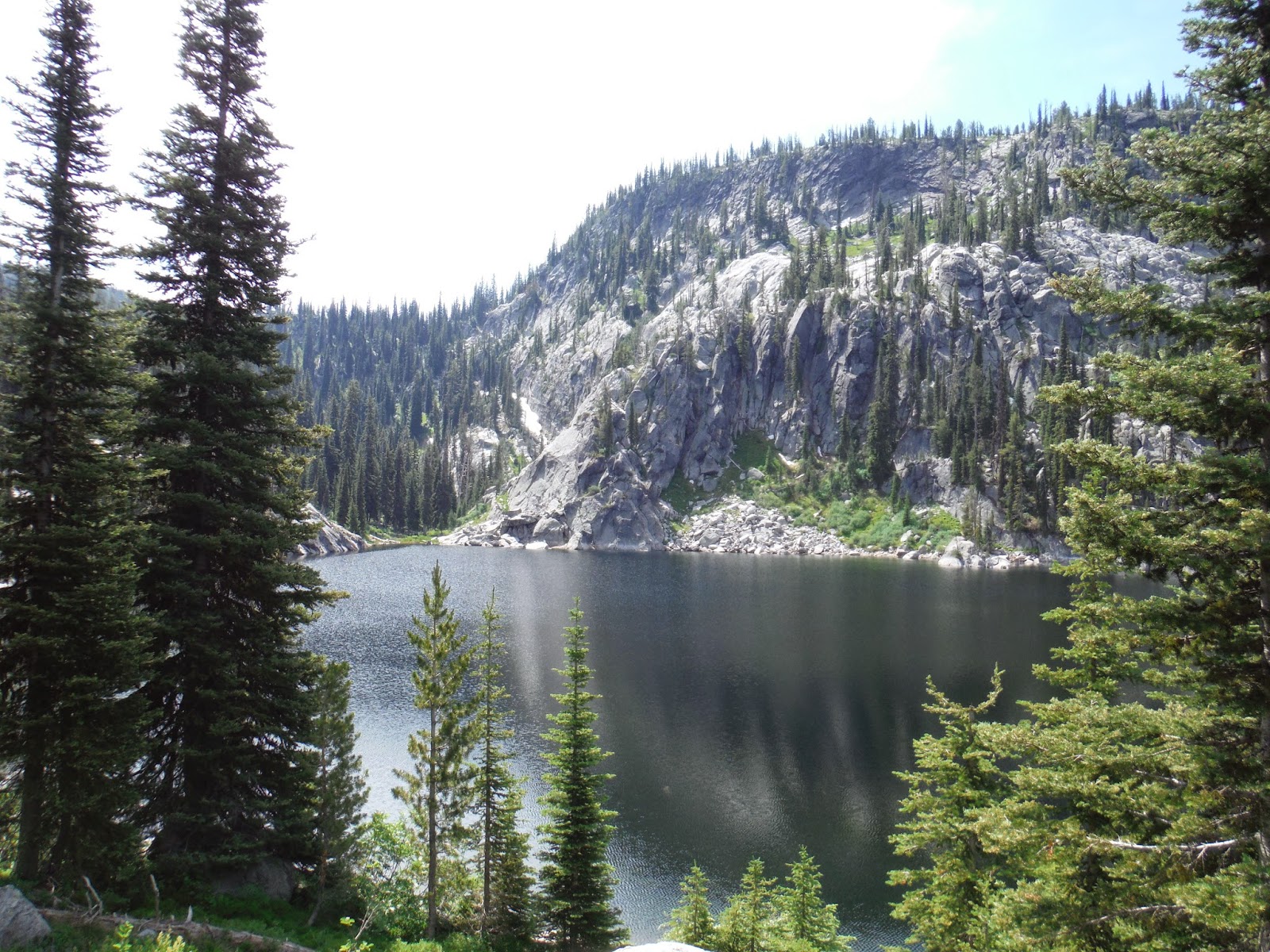 I found a spot where I could backcast with no interruption, and pulled out some line and began to cast. 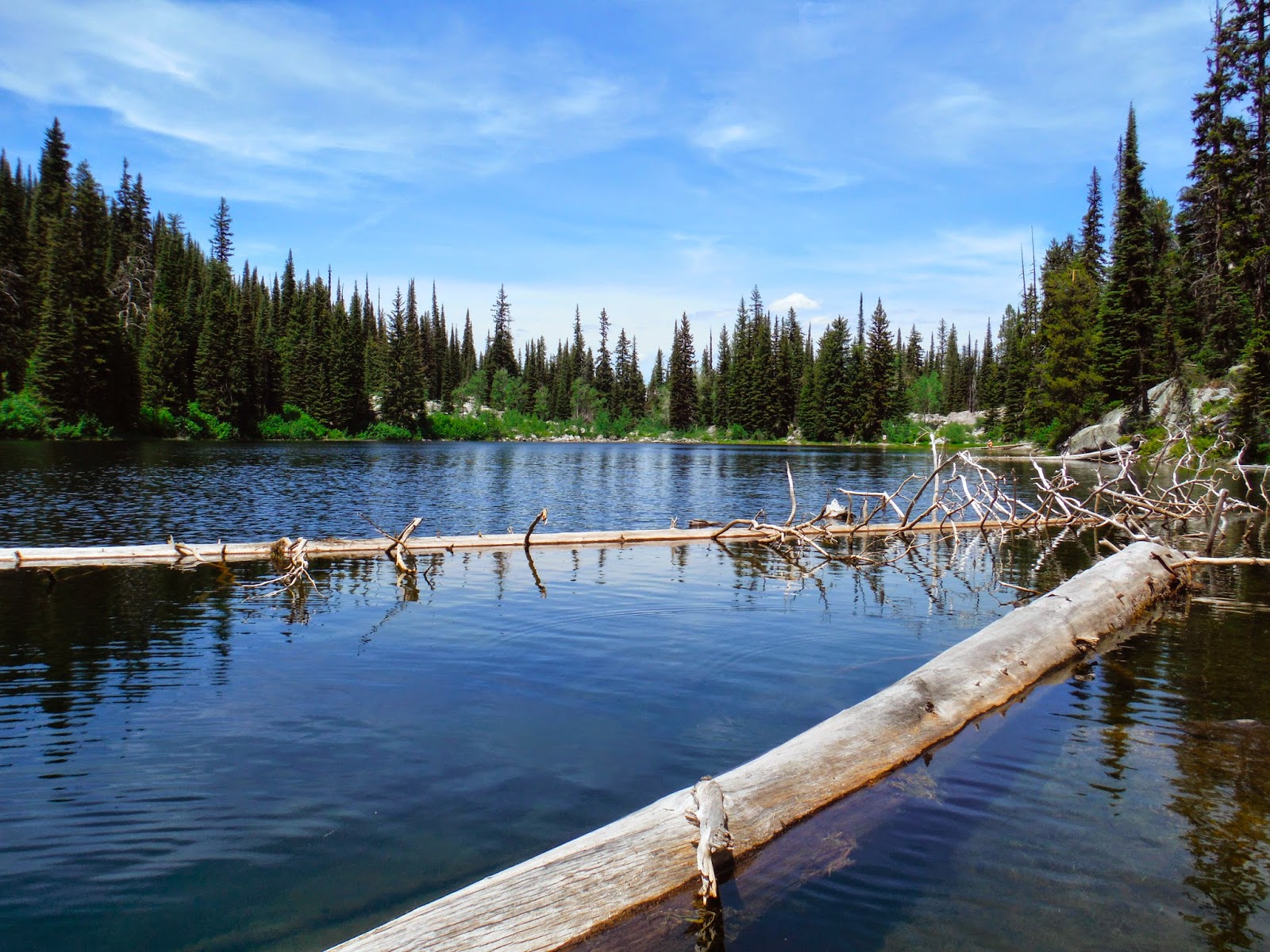 Off in the distance I noticed Gracy had found a nicely shaded spot to read her book.  As I casted, her solitude ended quickly. 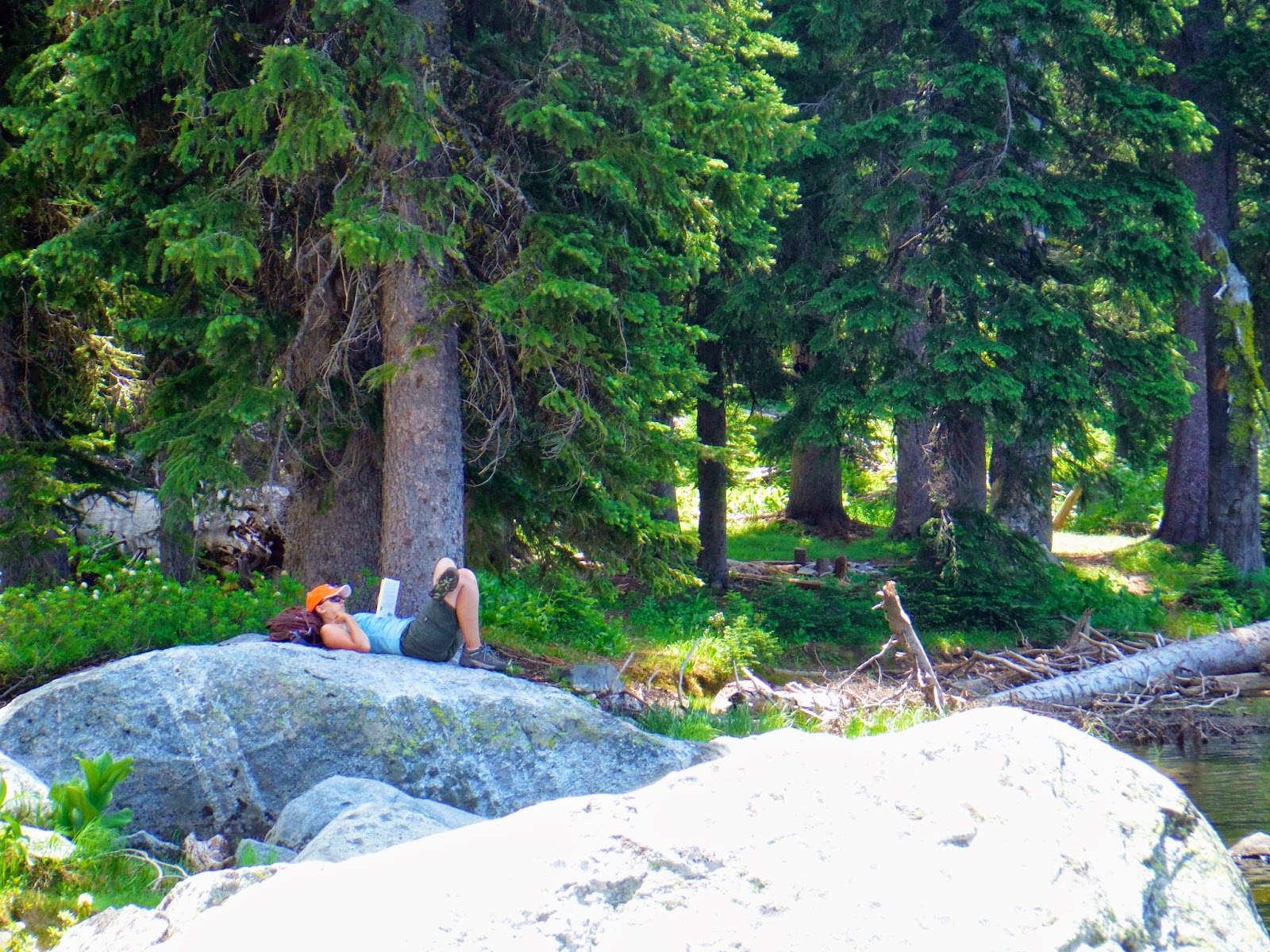 “I got a fish!” I yelled over to her.
“What is it?” She asked.  I looked at the fish, and caught a blue sparkle on the fin.
“IT’S A GRAYLING!” I yelled happily.  Gracy rock-hopped over to me quickly as I brought in the fish for a picture. 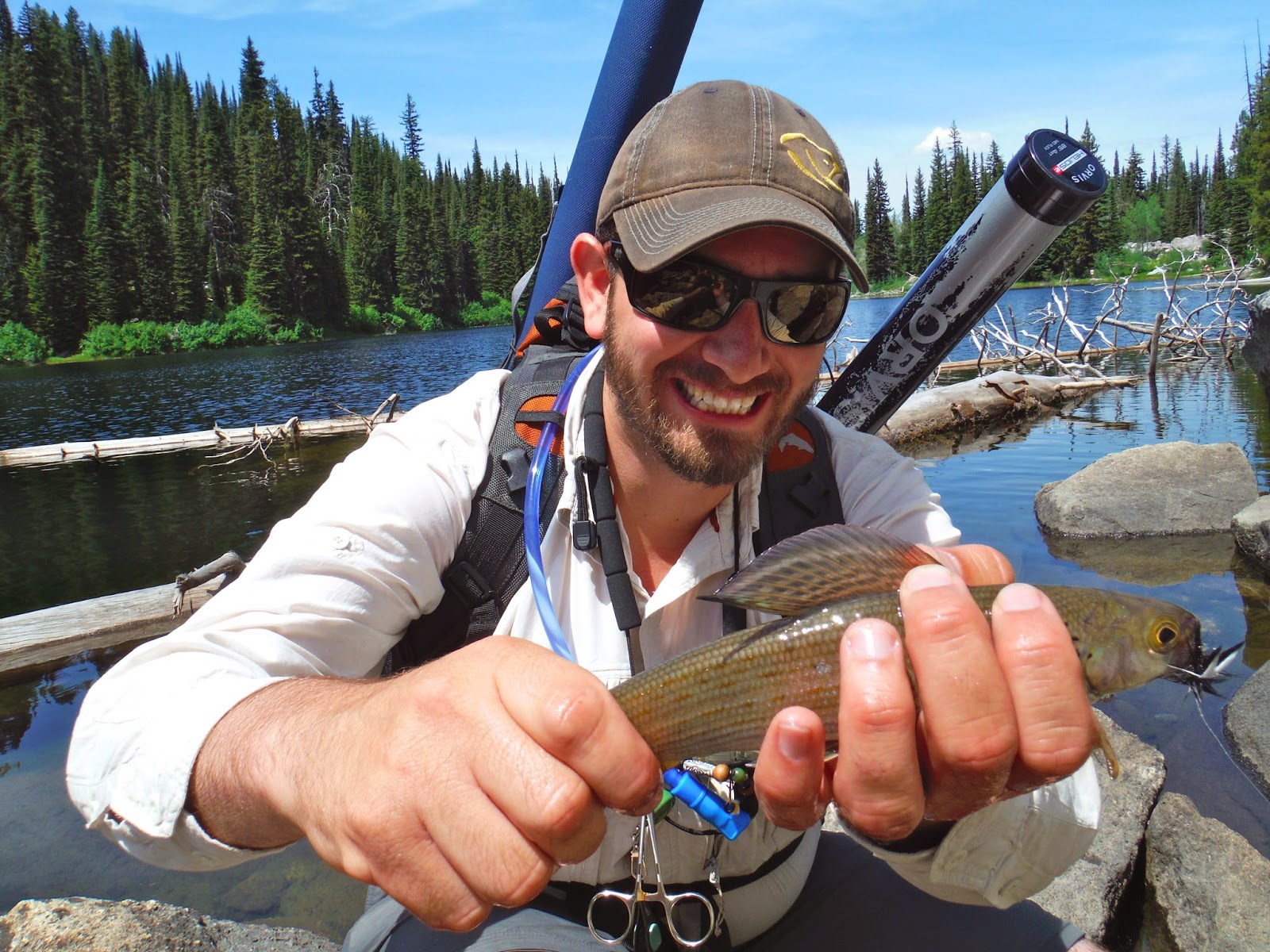 “Did you get a grayling?” Mike yelled from across the lake.
“Yep!” I yelled back, as I snapped a picture of my fish before it kicked away. 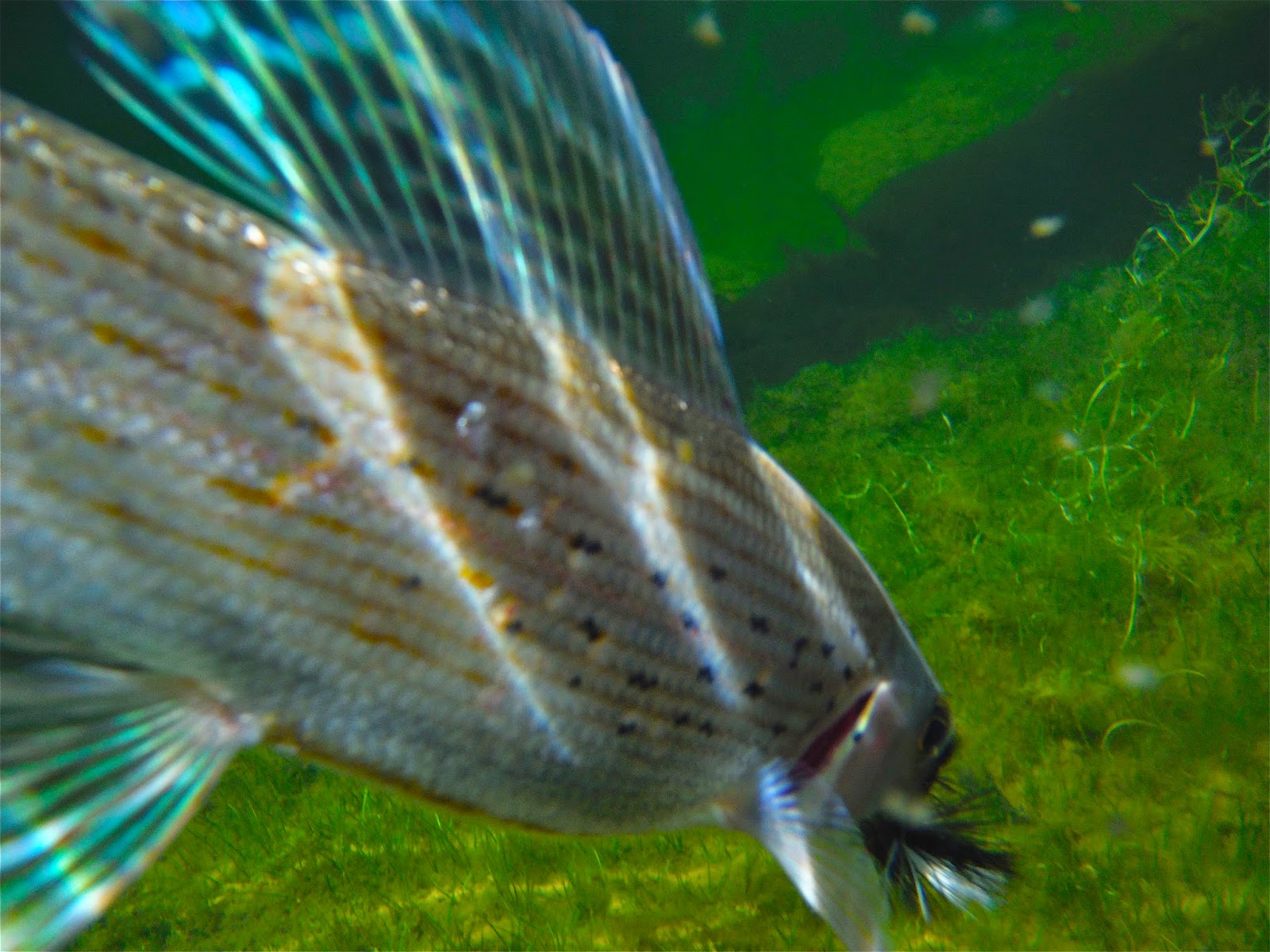 The elusive grayling has been on my list of fish-to-catch for a long time.  The large fin on the back makes it unique to any other freshwater fish. In one spectrum of light, the fin reflects a teal color that the camera just can’t do justice to. At another angle, the teal color almost disappears while little red dots appear, lining the fin of this sought-after fish. 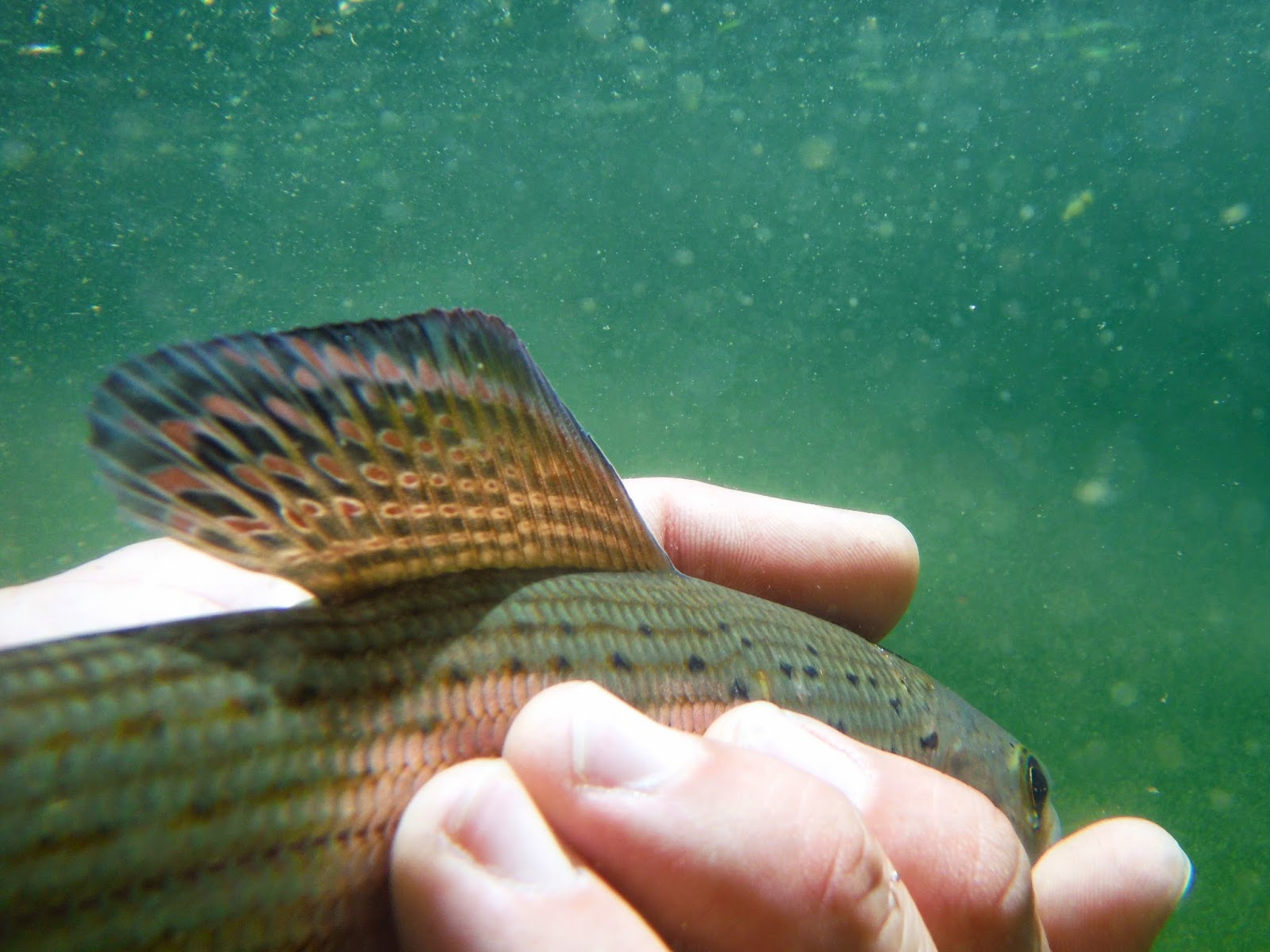 Grayling fishing had turned on!  Mike was making his success known from across the lake and, being the only ones on this lake, I would answer back when I had one on as well. 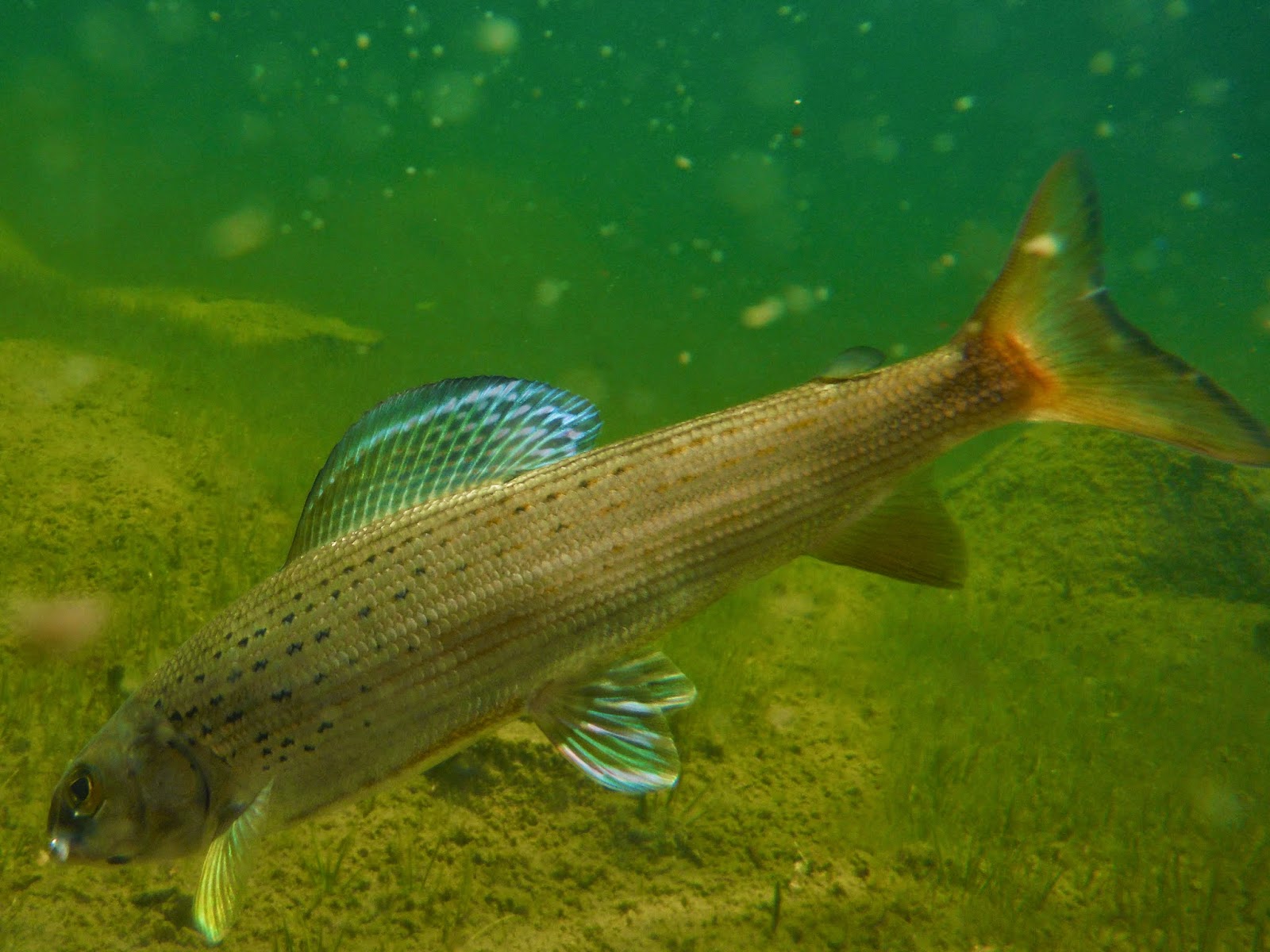 Gracy and I started to make our way back to where Mike and Kerri were.  Mike had picked up another grayling, and took this incredible shot with his underwater camera. 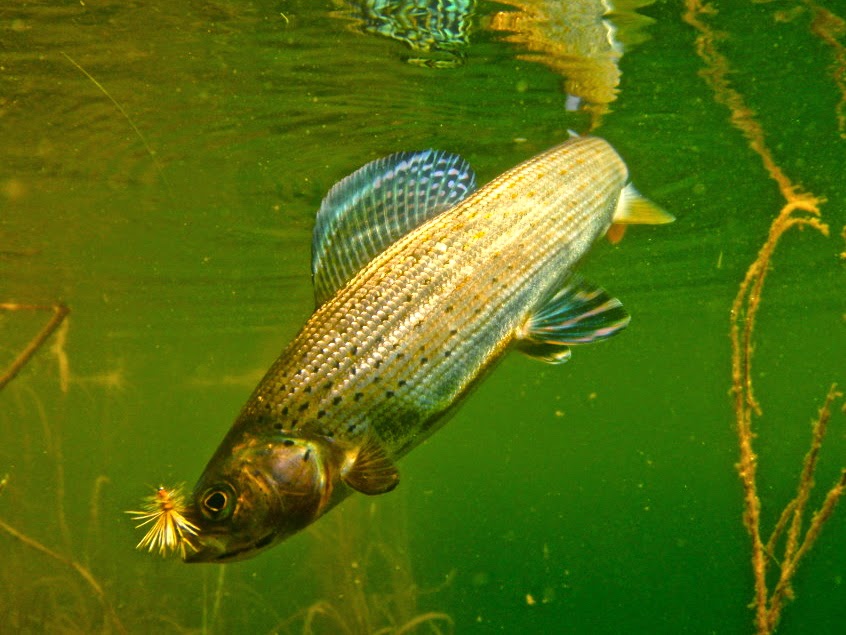 On my next cast, a rainbow took my fly, and I did everything I could to get it to shake itself off.  Finally, after almost having to bring it in, it escaped, and I casted back out in hopes of another grayling.  One took, and I looked back at Gracy with a huge smile.
“Another grayling?” She asked, just to be nice.
“Yep!” I said, bringing it in and snapping a picture before it took off. 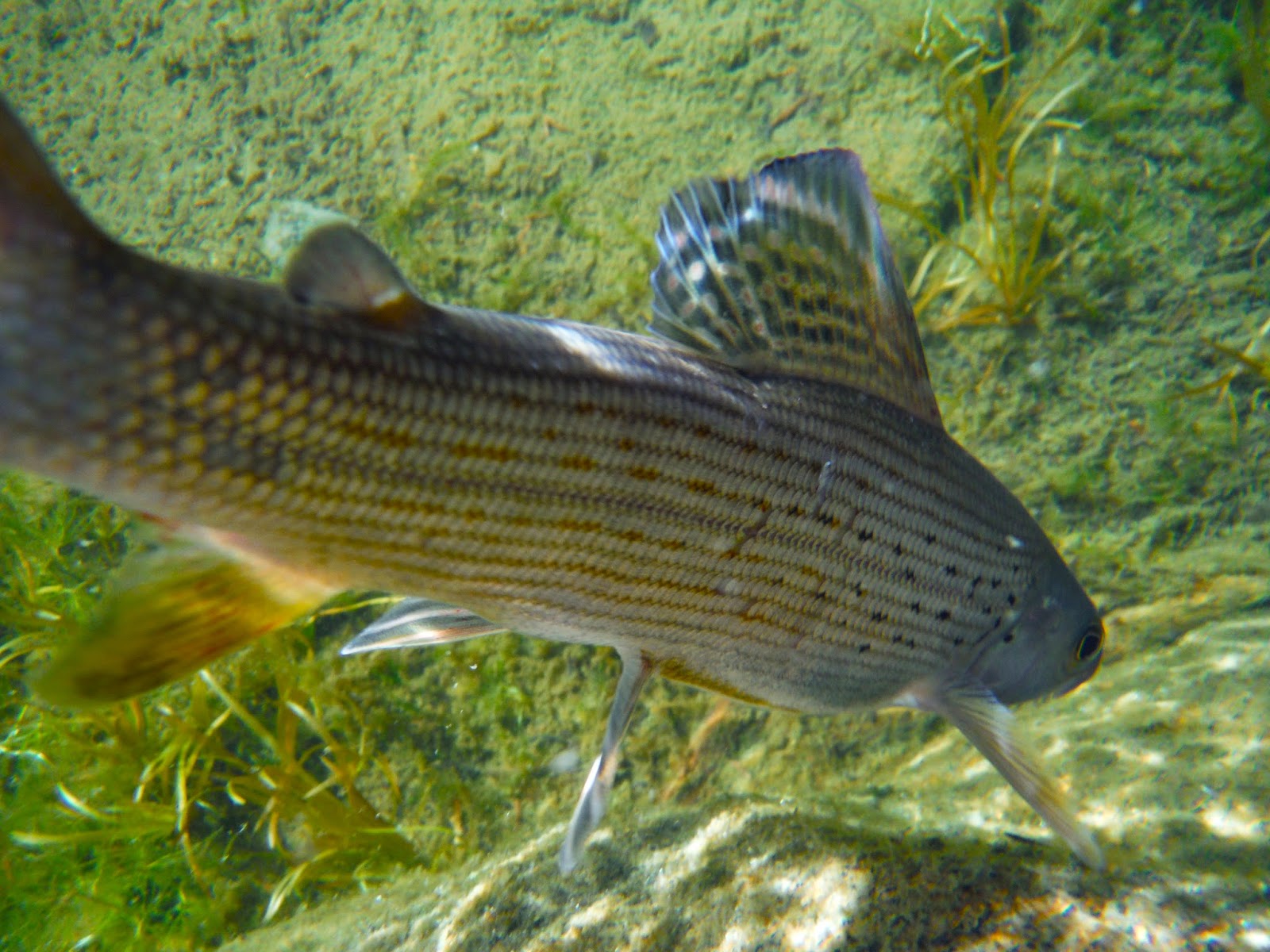 Mike had caught the last grayling of the day before we decided it was time to head back home.  On our way out, Mike stopped us next to a small pine tree.
“Have you guys ever eaten pine tips?” He asked, pointing at the bright new growth on a little pine tree. He plucked off a pine tip and handed it to Gracy.
“They are 100% eatable, a great source of vitamin C, and taste great sprinkled on a salad.” Mike said, popping some in his mouth.
“Pine tips…” I said, plucking a bit of new growth and putting it in my mouth.  I bit down on the soft pine needles and a rush a citrus covered my tongue; not so much of a piney taste, to my surprise.
“It’s not bad.” I said to Mike, who was chewing up the rest of his.
“Just a survival tip for you guys.” He said, as we walked back to the truck. 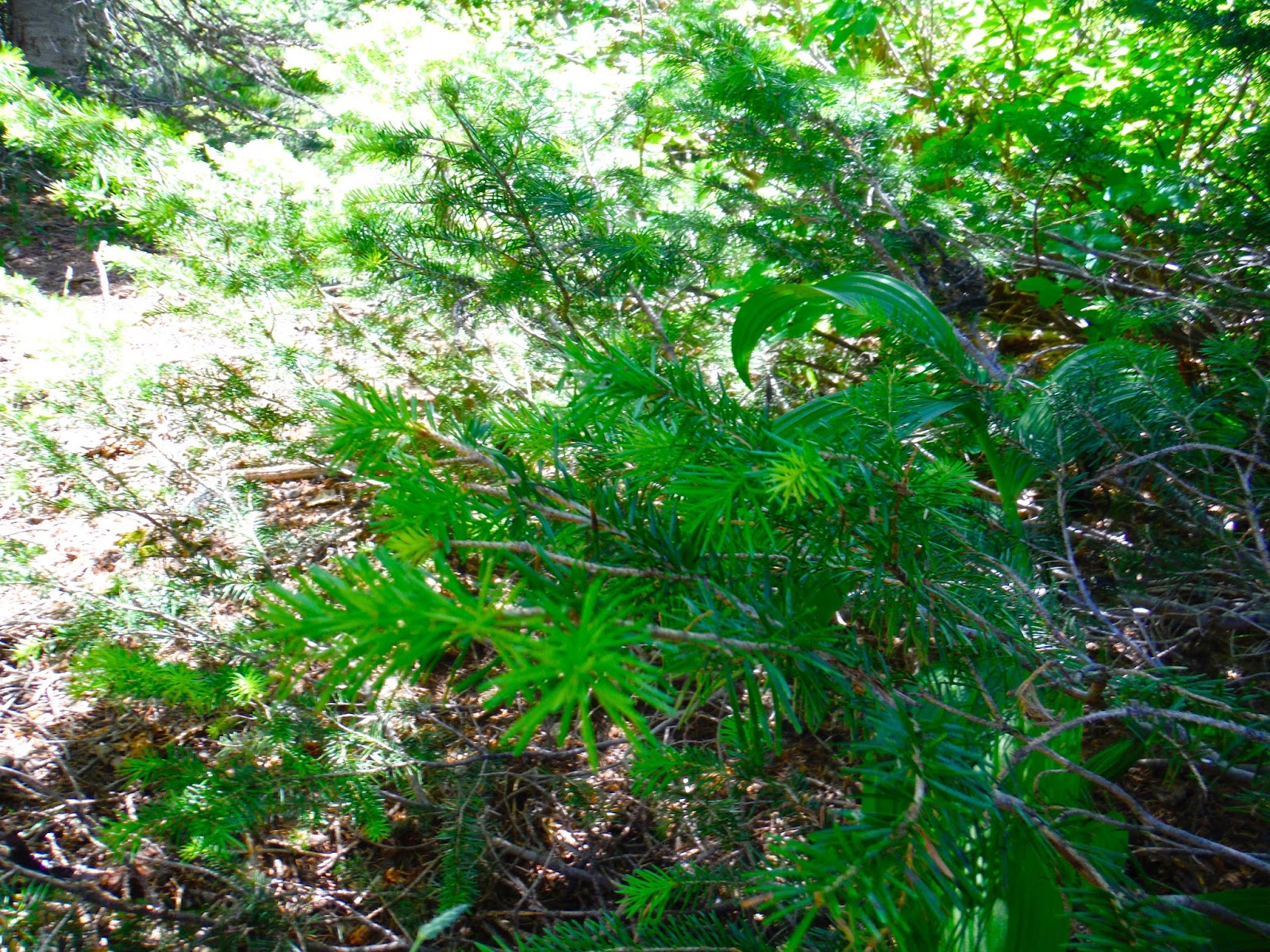 We took our packs off and laid them in the back of the truck.
“Did you see the can I fished out?” Mike said, pulling a can out of his pack.
“I bet you guys are too young to recognize this kind of pull top.” He added, showing us the can. 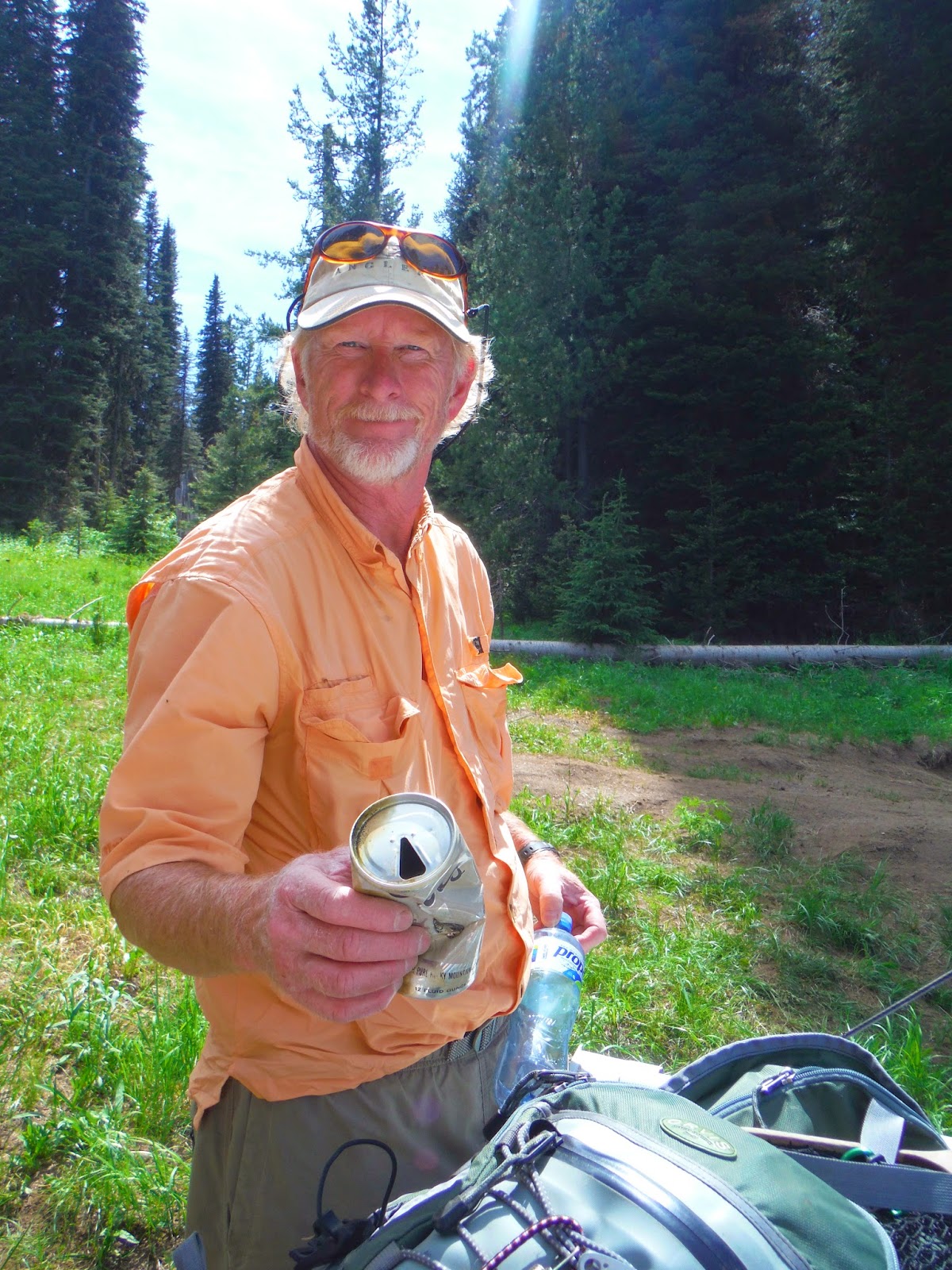 We took a back road out, because Mike wanted to show us the view of Little Payette and Payette Lakes.  We drove to an opening on the bumpy road, and witnessed a fantastic view of the land, ending a fun day back in the mountains. 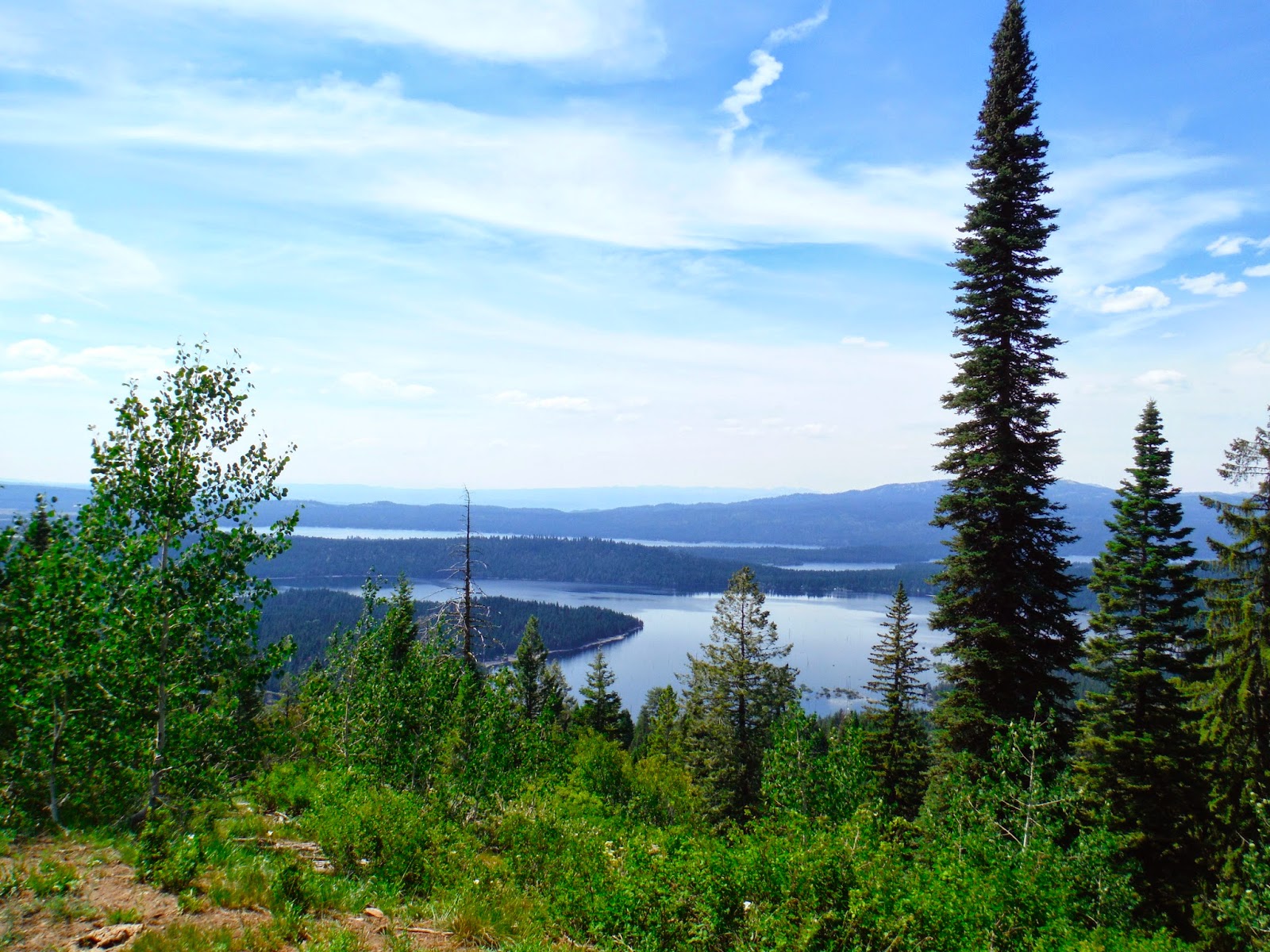 4 thoughts on “Back in the Mountains”