Skip to content
A Montana license was in order for the day, because Colton was taking me to a back country stream to film a fly fishing video for my dad.  Every year my dad wants a video for Father’s Day, and where better than a clear creek catching tons of fish?  As we got deeper into nowhere, I noticed a sign on the side of the road…
“Oh, I have to stop and get a picture of that!” I said to Colton, who was in the passenger seat.
“Oh yeah?” Colton replied, bracing himself, because I had pressed on the breaks rather quickly.
“My dad hates the idea of bears being around… This will be good for him!” I said, flinging the door open and running over to the sign for a good picture. 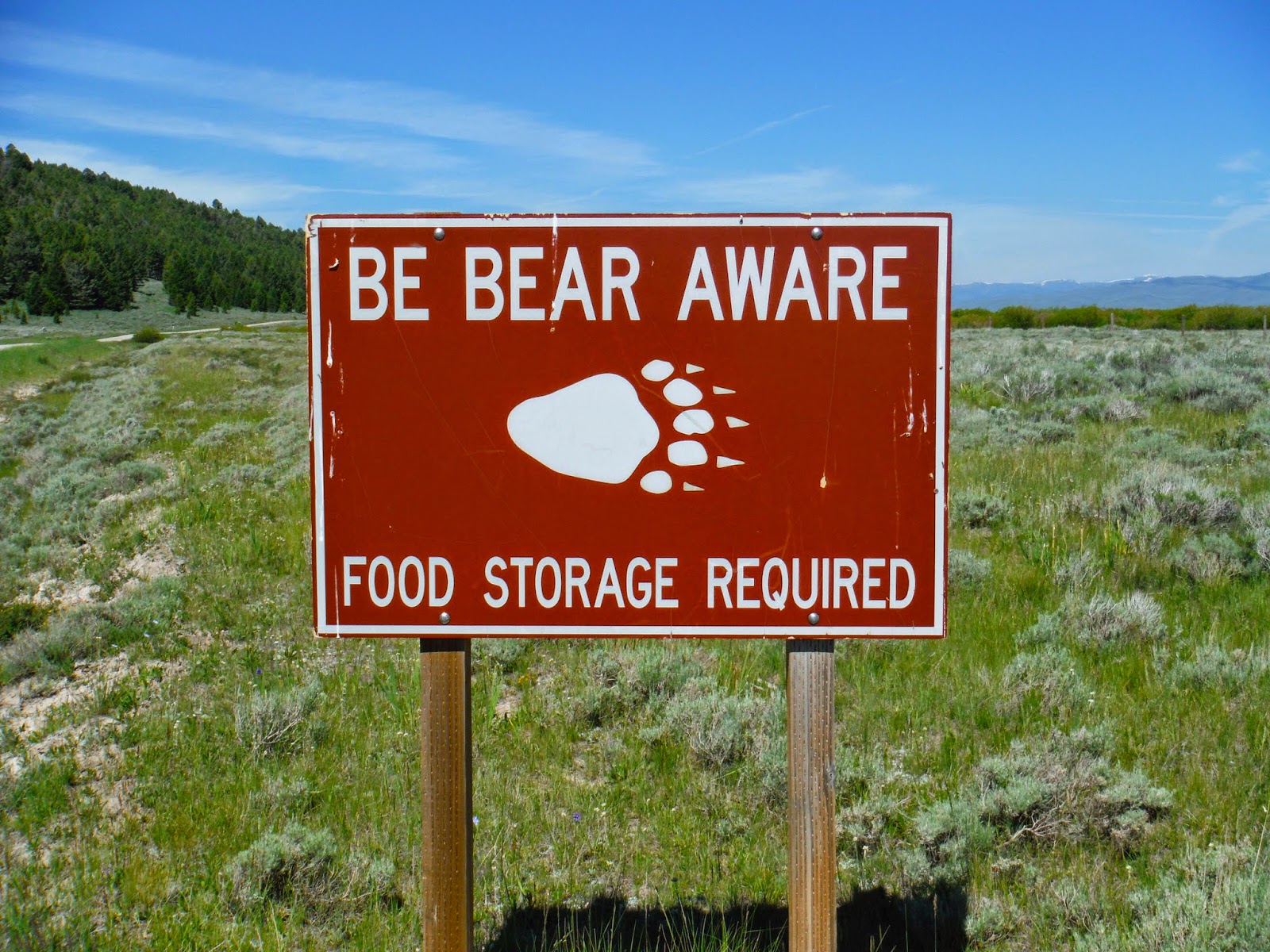 “That will be a nice addition to the video.” I said, shutting the door.
“Why doesn’t your dad like bears?” Colton asked.
“Because he thinks they are going to kill us.” I said as we drove on. “When my dad was in Yellowstone a while back, every corner we turned he would point at a tree stump in the grass and yell ‘BEAR!’” I said to Colton, who laughed. 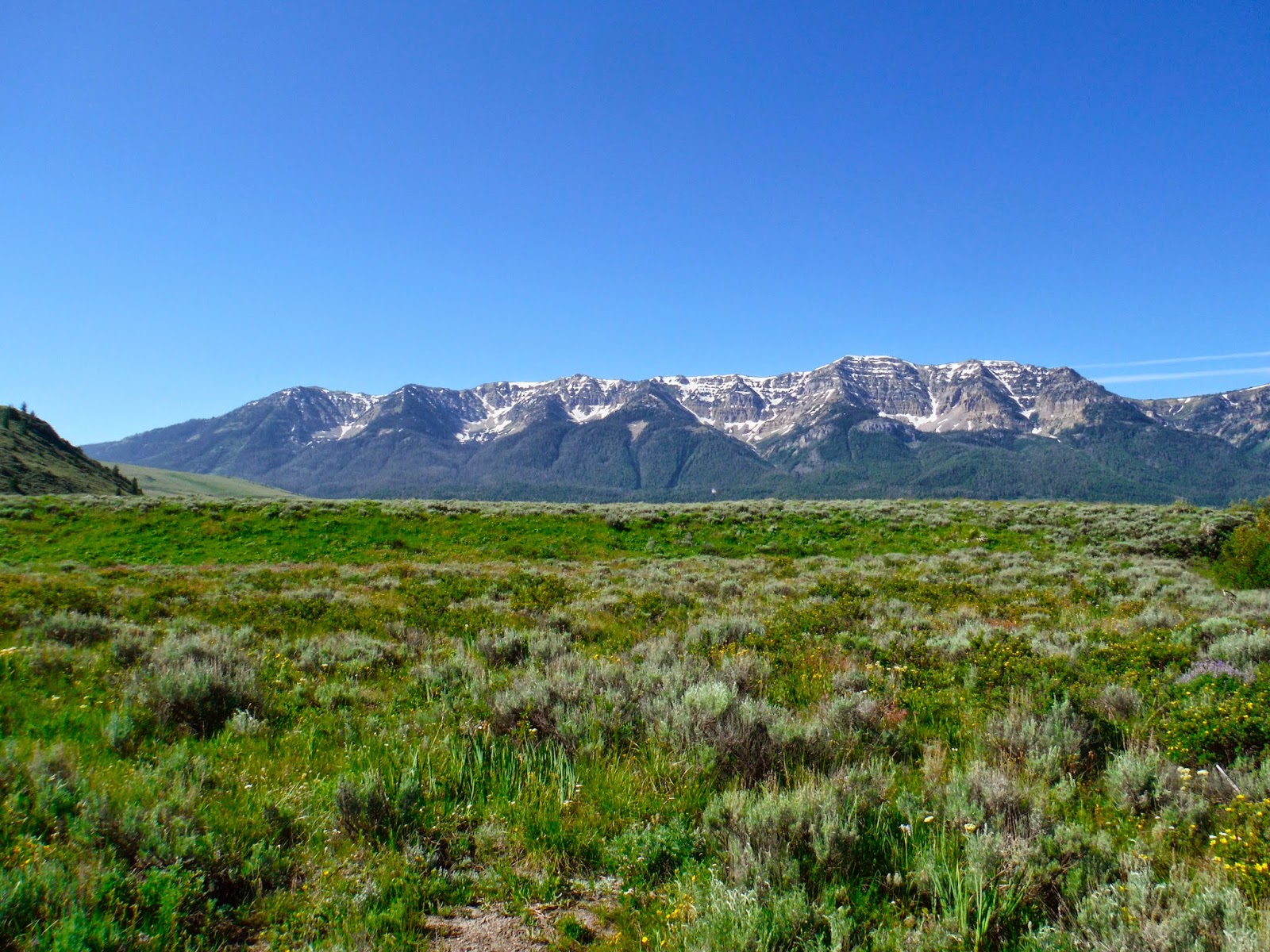 We arrived at the stream, and quickly geared up.  Colton had his Go-Pro, and I had borrowed one from Ryan.  All geared up and Go-Pros fully charged, Colton led the way to the best part of the stream. 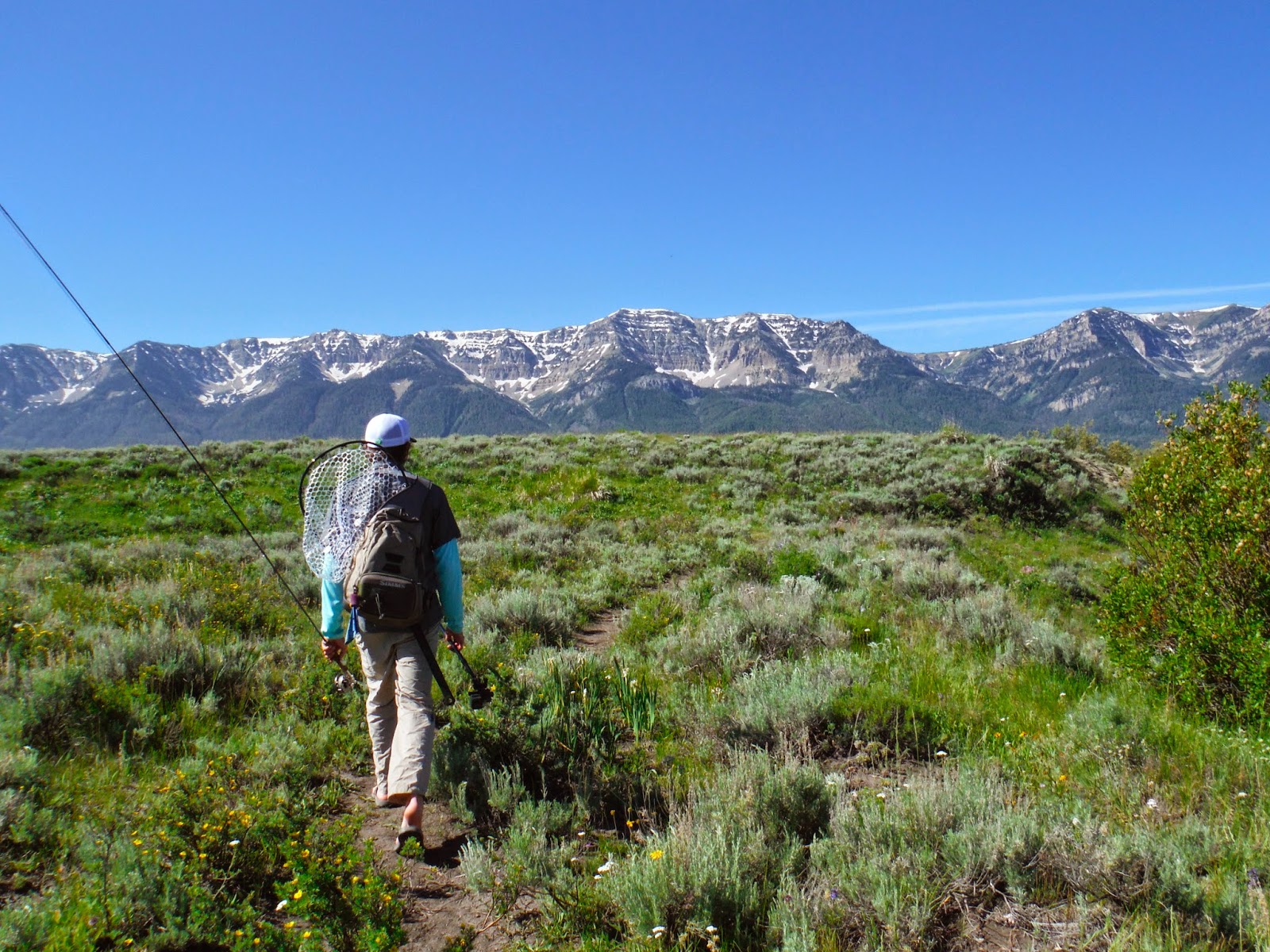 “Right there!” Colton said, pointing to a nice hole that looked to be filled with fish. “Go in below it and fish your way up.” Colton suggested, and off I went. 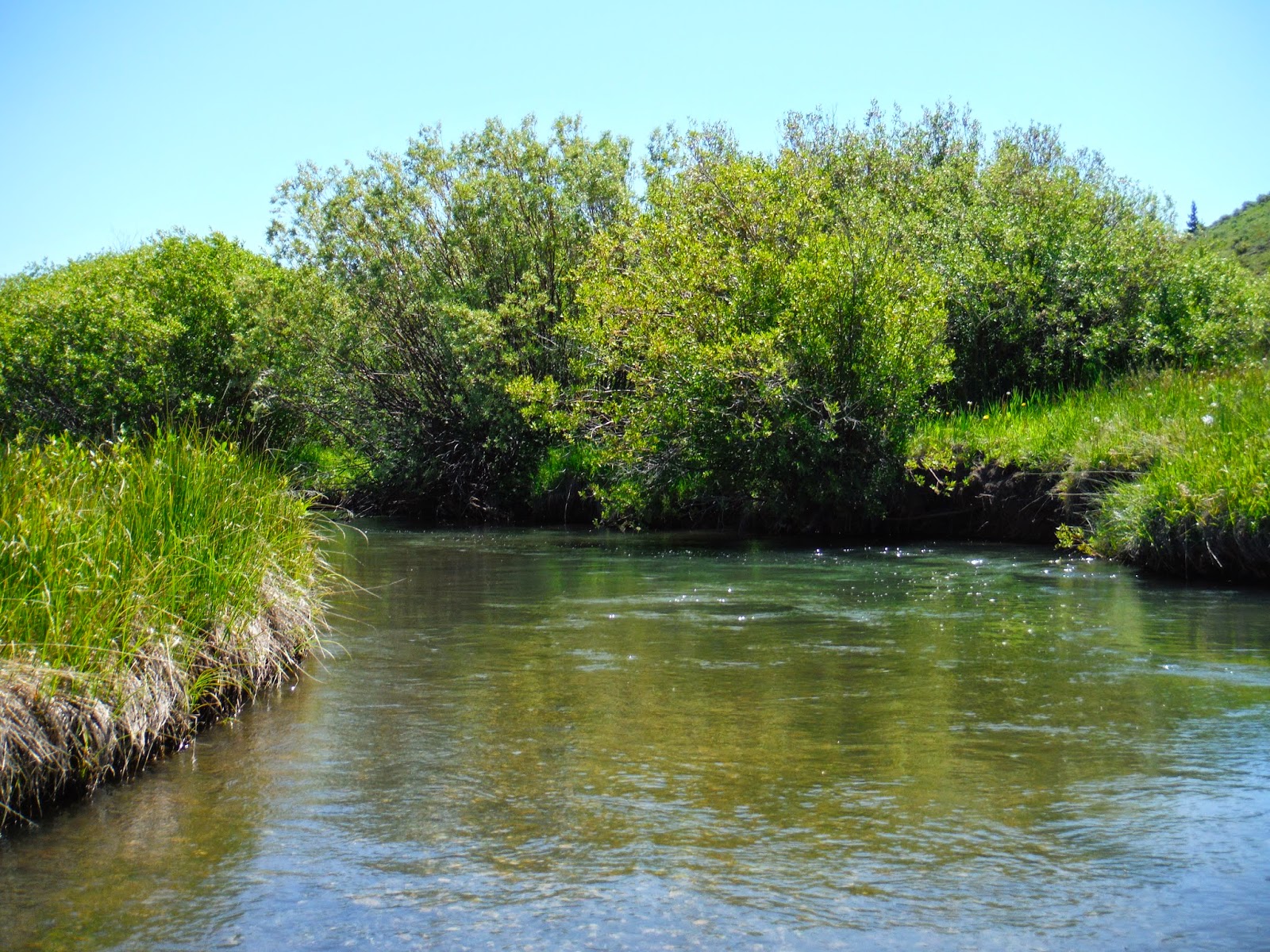 This stream is crystal clear, and the surrounding mountains will make for a great back drop for the video, I thought, as I started fishing.  My Pico Spider smacked the water as I searched with it, but nothing was interested.
“That’s weird… you should have a fish by now.” Colton said, looking at the water.  I quickly switched my leader to a euro nymphing set up and started nymphing. I began fishing intensely, but nothing was taking. 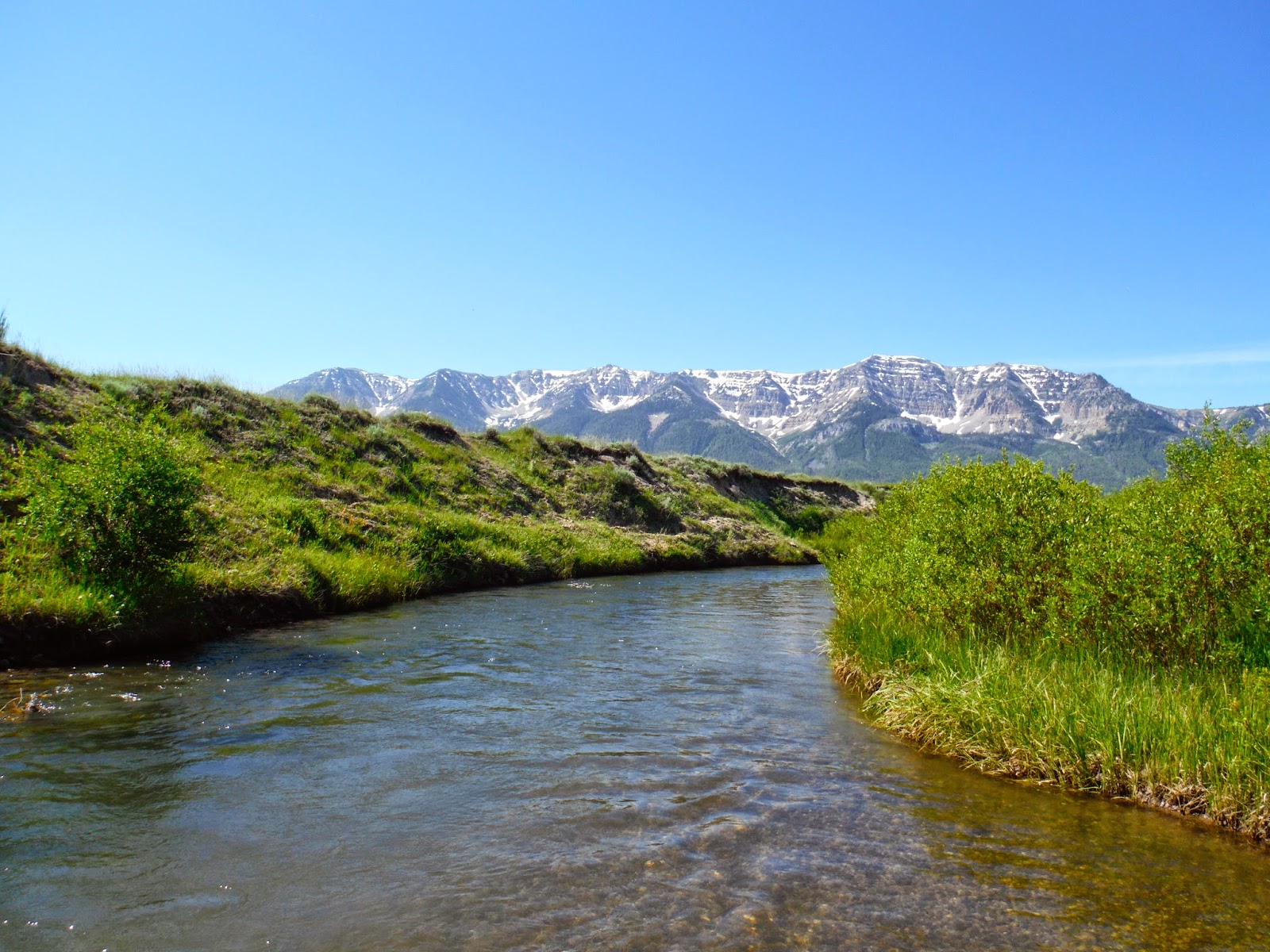 “There has to be something in these deep holes.” I said to Colton. “They look too perfect…” I had thoroughly nymphed the hole, once more coming up empty handed.
“I’m going to walk through it and spook the fish out… keep your eyes open for a fish.” I said to Colton, who watched from a high bank.  I stepped into the deepest part of the hole and nothing spooked.
“I think it’s too early.” Colton suggested, and I agreed.  The water was higher than he remembered, so we pushed on to another stream. 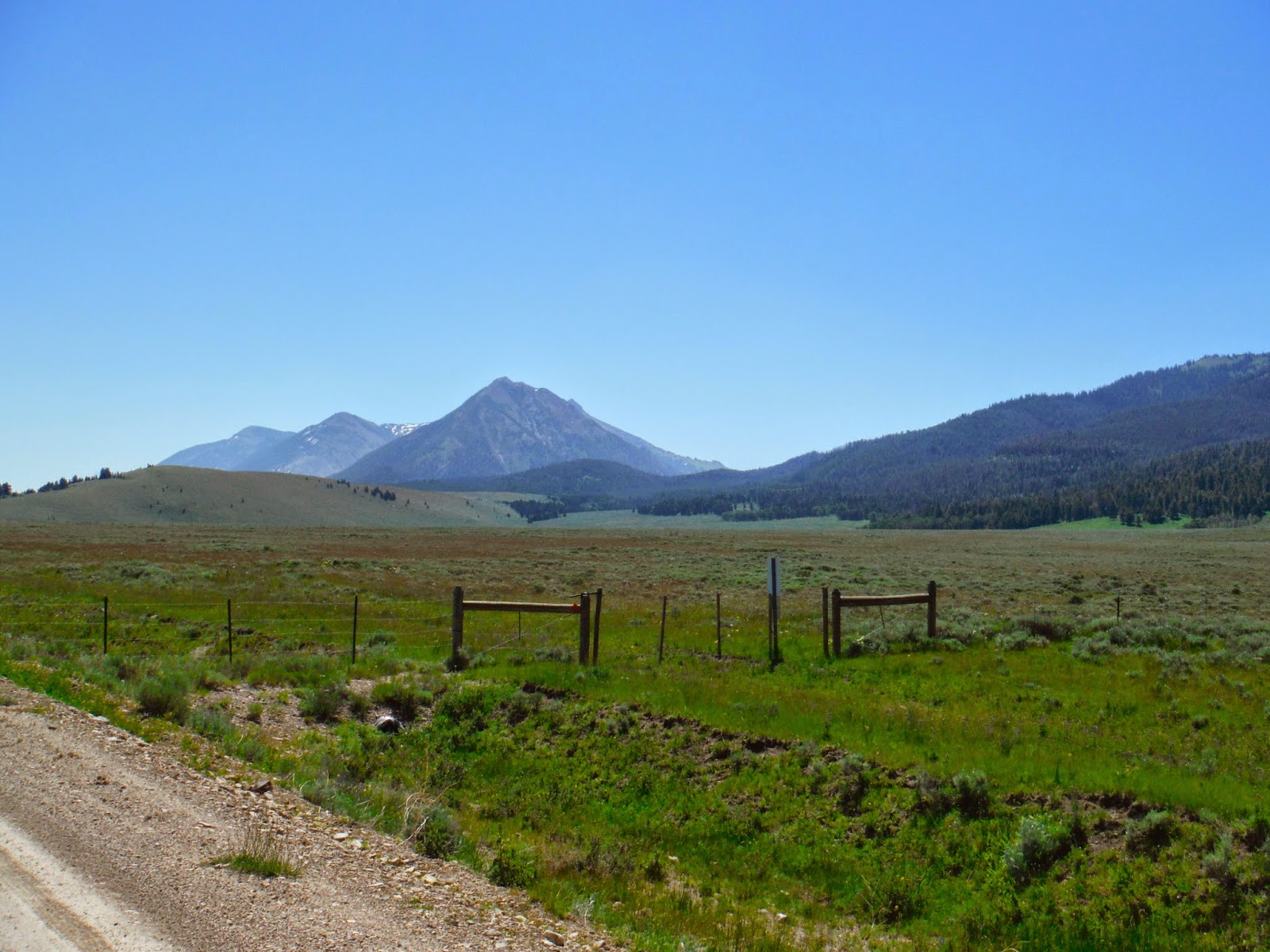 A small tributary of Henry’s Lake was where we stopped next.  The clear water looked promising, but once more, no fish.
“Colton, this is not turning out to be a very good day to make a video for my dad.” I said with a chuckle as we drove back to Island Park.  We approached the Buffalo River bridge, and Colton noticed cars parked all around.
“There’s probably a moose in the river.” Colton said, as if it were no big deal.
“A moose!!!” I yelled, like an out of town tourist, and stopped for a picture. 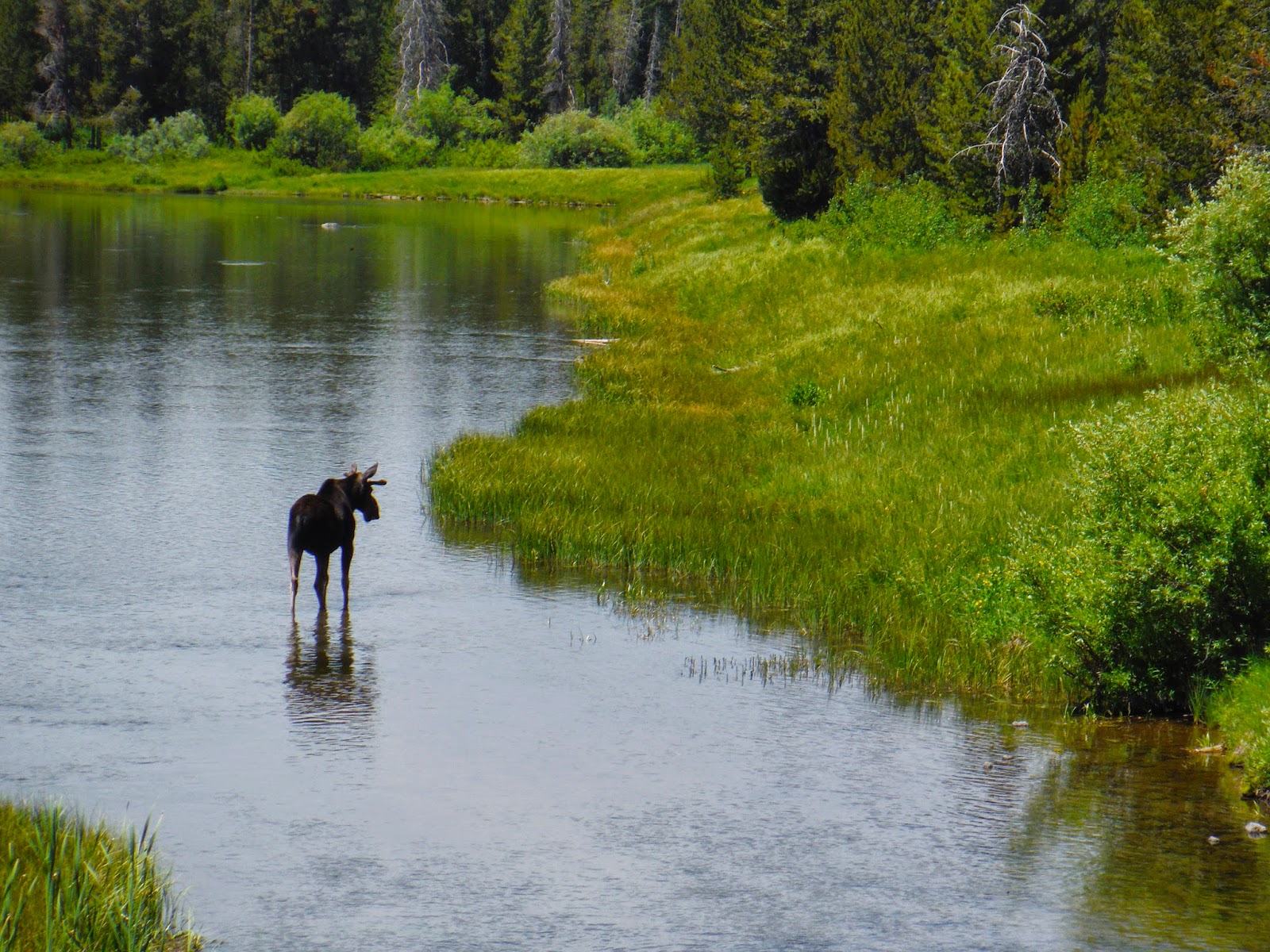 “I have an idea, Colton.  Let’s get video of us feeding the fish by the Three Rivers Ranch!” I said.
“That would make for a fun video, and I can get some underwater shots!” Colton added.  We stopped to buy a loaf of bread and a beverage before gathering footage of  the hungry fish.

It was fun, to say the least; who knew that a three dollar loaf of bread could be that much fun!
“I have one more spot I want to take you.” Colten said.“I know you will be able to get a fish there!” The confidence in Colton’s voice was certain.  This was not a small stream his buddies had told him about; this was a place he personally knew and loved to fish. 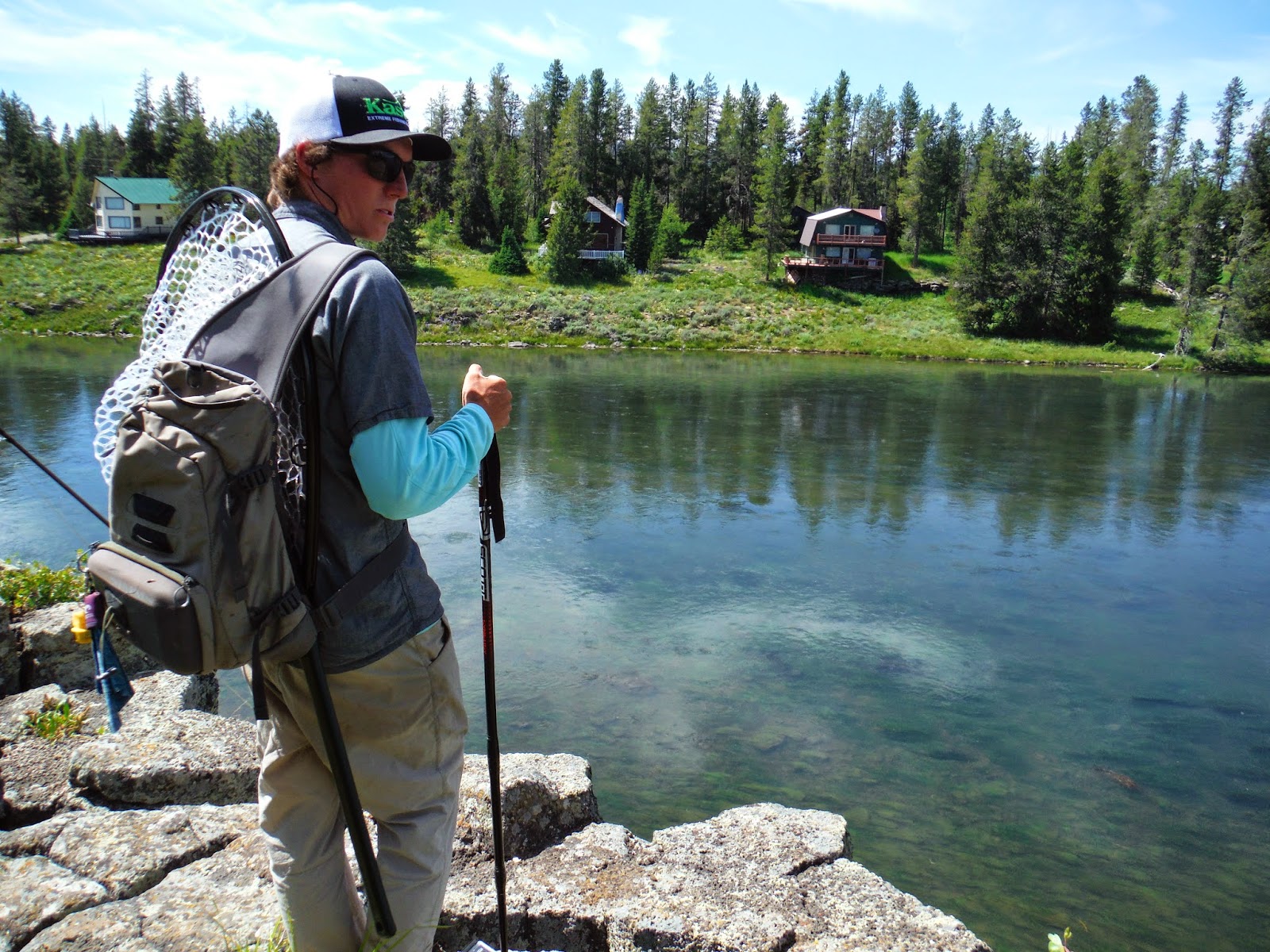 Colton led the way once again, and just downstream we saw rising fish.  Colton started giving suggestions on how to best approach the fish, which was funny because it was not that long ago when I was teaching him on my local waters.  Back then, I would give Colton the first shot at fish, and now, only a few years later on his waters, he was doing the same for me. 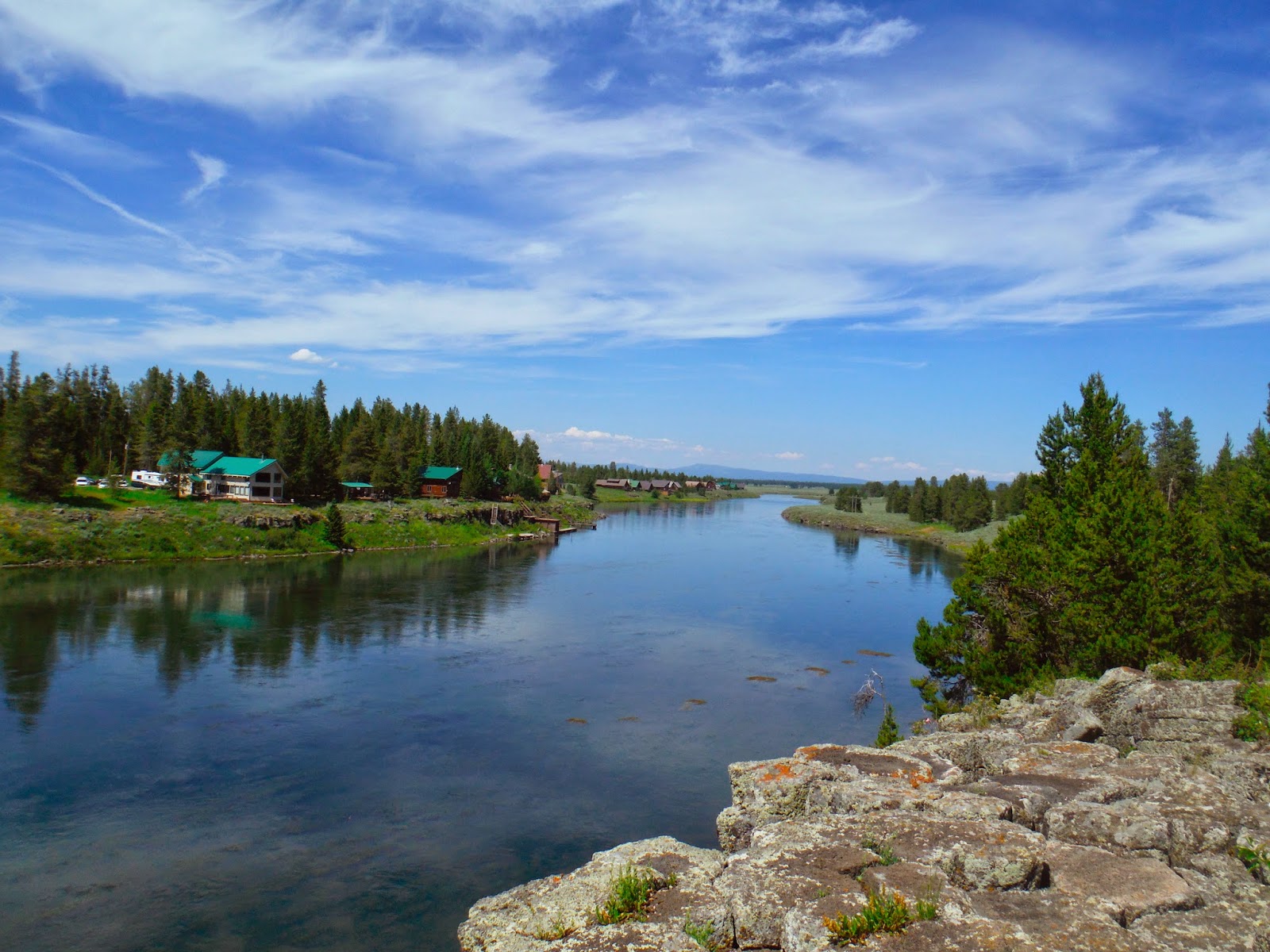 I snuck up on the rising fish and presented a few different flies with no success.  Then I thought W.W.J.D. (What would Jeff Do)?  I pulled out my fly box, and in it was the very fly Currier had used yesterday on the Henry’s Fork: a mahogany dun.  I hit record on the Go-Pro, and presented the fly.  I watched my fly as it drifted downstream, then the smallest dimple of a rise took it in.  I set the hook fast and the fish took off right towards me! I scrambled to get my line taught, and when the fish felt the pressure it leaped out of the water!
“COLTON!!!” I yelled! Colton was a ways downstream, but came up quickly after seeing I was hooked into a fish. With his net ready, he held his Go-Pro out to get a shot of netting the fish.
“Yeaaaa!” I yelled, after the fish was in the net.  Not only did I land a nice fish, we got it all on camera. 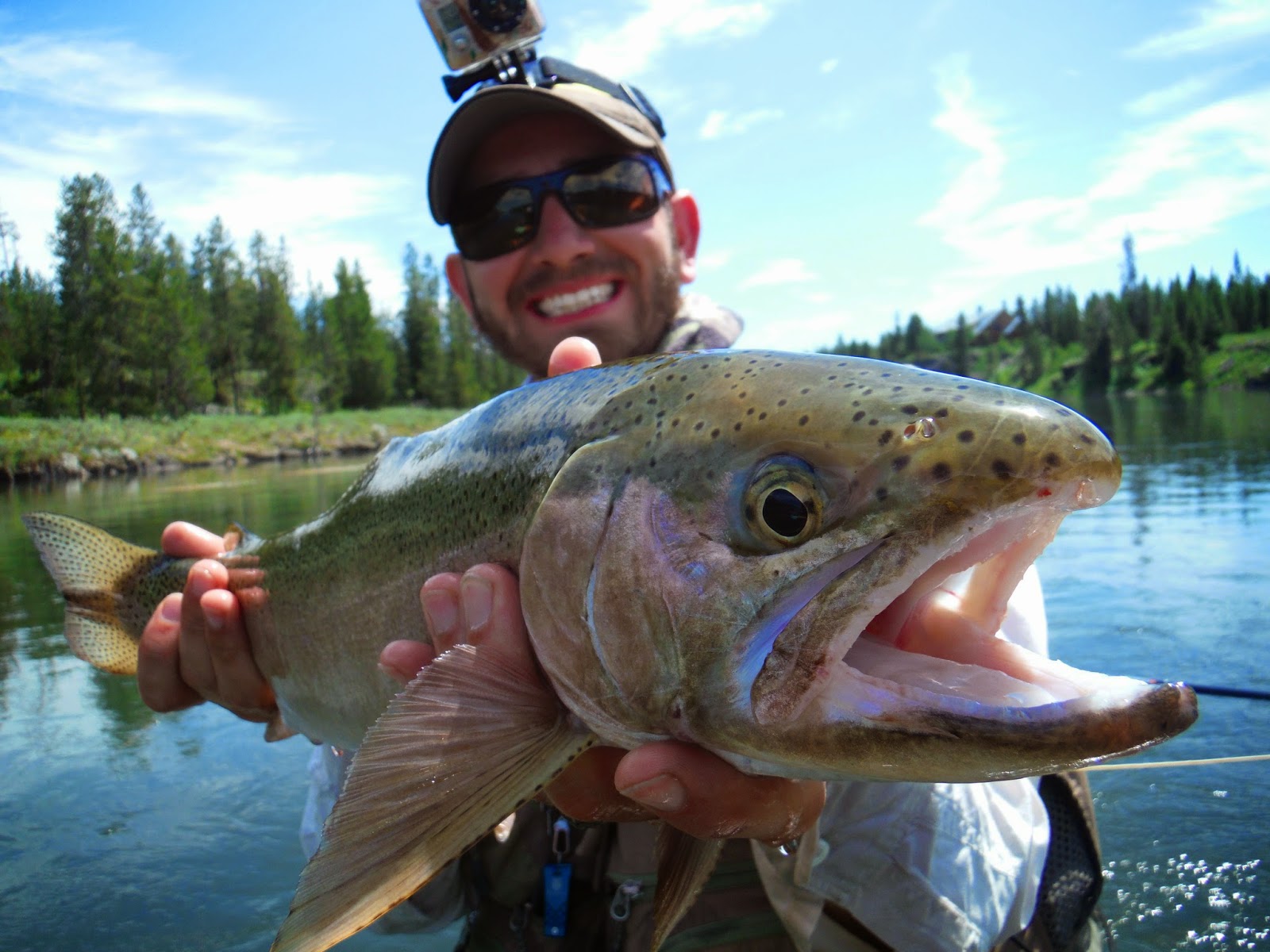 Colton was all smiles as he held out his Go-Pro, and filmed the fish swimming away.
“That was a nice fish!” He said, before we headed back to the car.  My time on the Henry’s Fork ended quickly after that last fish, after all it was almost 5:00 p.m. and I still needed to drive to Boise.
“Thanks for helping me out today, Colton. I had a fun time checking out all the little streams.” I said.
“Sorry we didn’t get into many fish.” He said back.
“Hey, if you can have a good time fishing a gorgeous stream, then that says more about you than the fishing adventure.” I said, with a smile.
“That’s right!” Colton agreed.  We got Colton’s gear out of the back of my Rav before I headed back to Boise, ending a great time fishing on the Henry’s Fork.

Here is the video I made for my dad!  Happy Father’s Day!