Skip to content
A last minute call from Mark Grajcar usually ends with the inability to tag along on his fishing adventure, but today he was right on the money!  I arrived to discover that Rick Grajcar was coming along as well.  This is going to be a fun day, I thought as I placed the last bit of gear in Mark’s truck.
“Where is Carolyn? I want to say hi.” I said to Mark, who led me inside to say hi to his wife.
“Carolyn, Erik wants to say hi.” Mark yelled as he entered the house.  I stood waiting for Carolyn, and when she came out there was definitely not a smile on her face. I don’t know what I had done, but I knew I was about to get a lecture.  Carolyn cocked her head to the right and squinted her eyes… then spoke.
“Erik…” She said, softly, I didn’t dare interrupt “…Is it true that today is Gracy’s birthday, and you are going fishing?” Before I could reply, Carolyn retorted.  “Because, I could put an end to today’s… plans.”
Mark quickly started to talk, but Carolyn shot him a look that made his voice fade faster than a puff of air blowing out a match. Then she looked back at me and I smiled.
“Gracy has to work today, and has a meeting at 6 p.m. that will go until 7 p.m.”  I said, but Carolyn didn’t look impressed, so I continued.
“I woke up early so that I could watch her open her birthday gifts and, when we get back at 6-ish, Gracy and I have plans to go out to dinner.  AND… she said it was okay if I go fishing today.”  For icing on the cake, I also added, “And I wanted to come in and say hi to you, and tell you that I like your garden.”
Carolyn’s face lit up with a kind smile that could warm a Christmas morning, “Well okay then!” She said, and we had a nice conversation before we took off to the Middle Fork of the Boise. 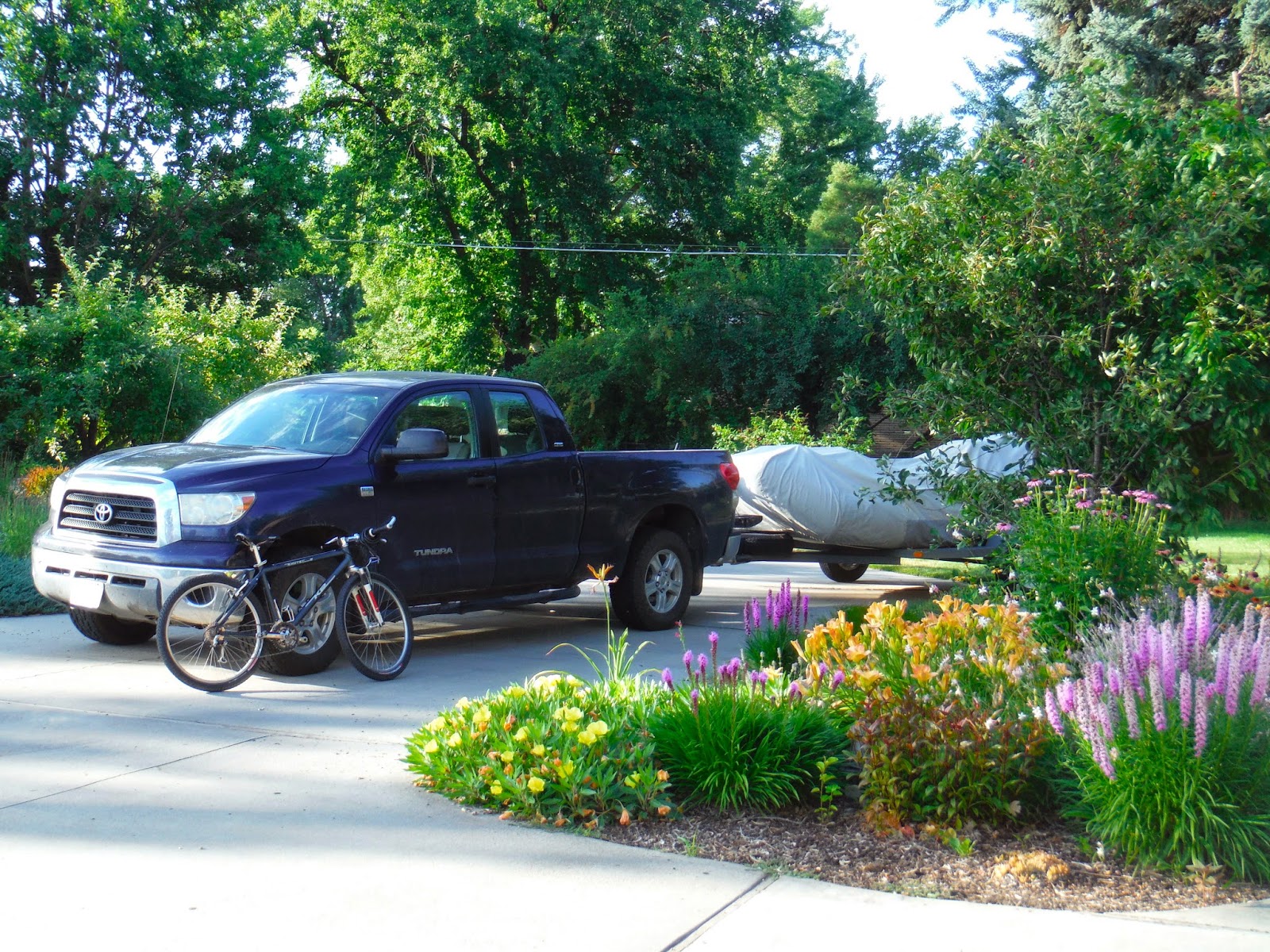 The long, bumpy road with a cliff on one side is the fun part of driving up to the Middle Fork. Going 10 to 15 miles per hour can make it feel like forever, but we passed the time talking about how we could help our friend, Benny, find a girlfriend.  The road was too short to help Benny, but we found a good place to put in the raft and start our float. 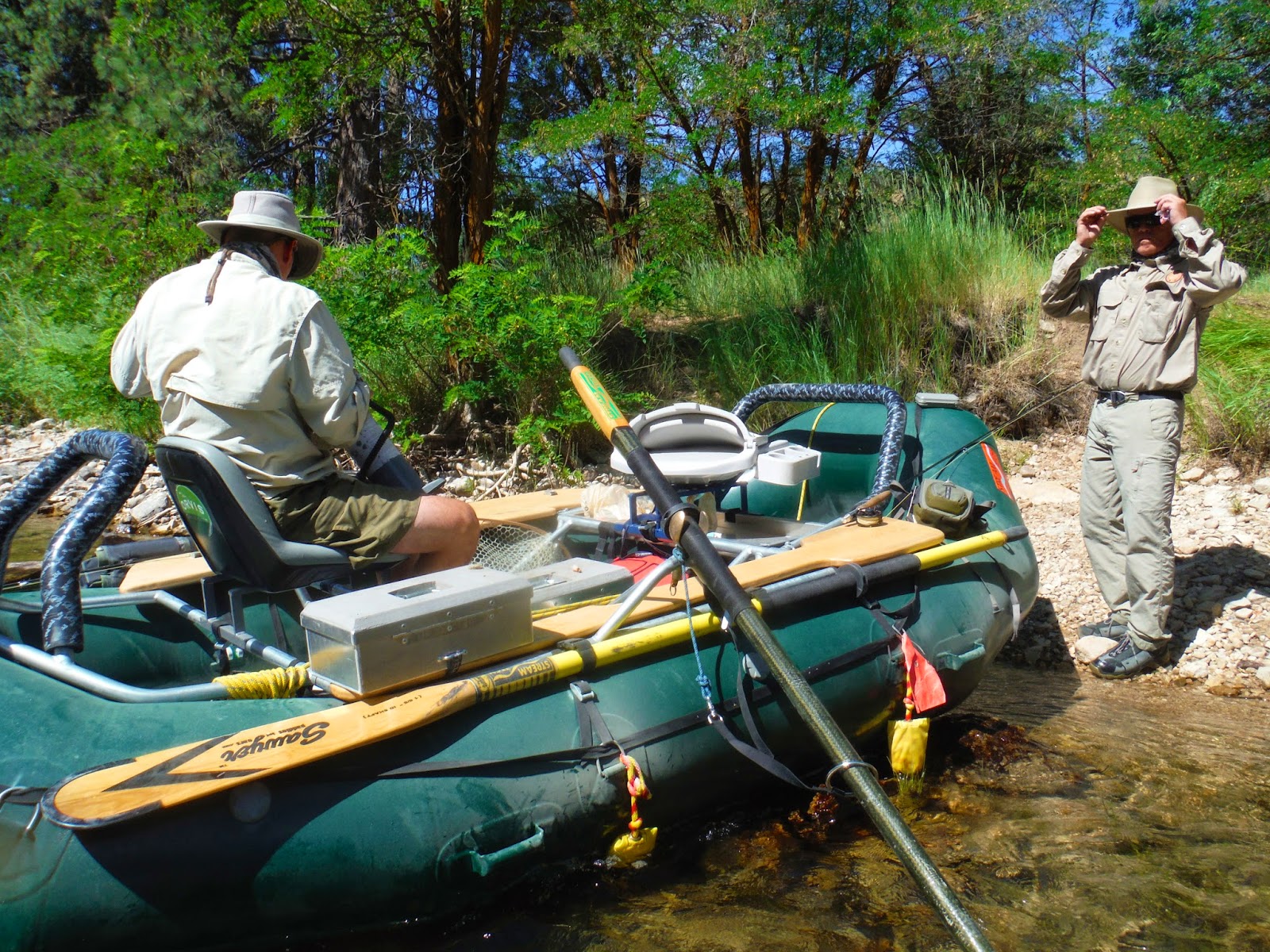 Mark took the oars first, while Rick insisted on giving me the front of the boat.  I had tied on a royal chubby to start the day, and I was into fish in no time. 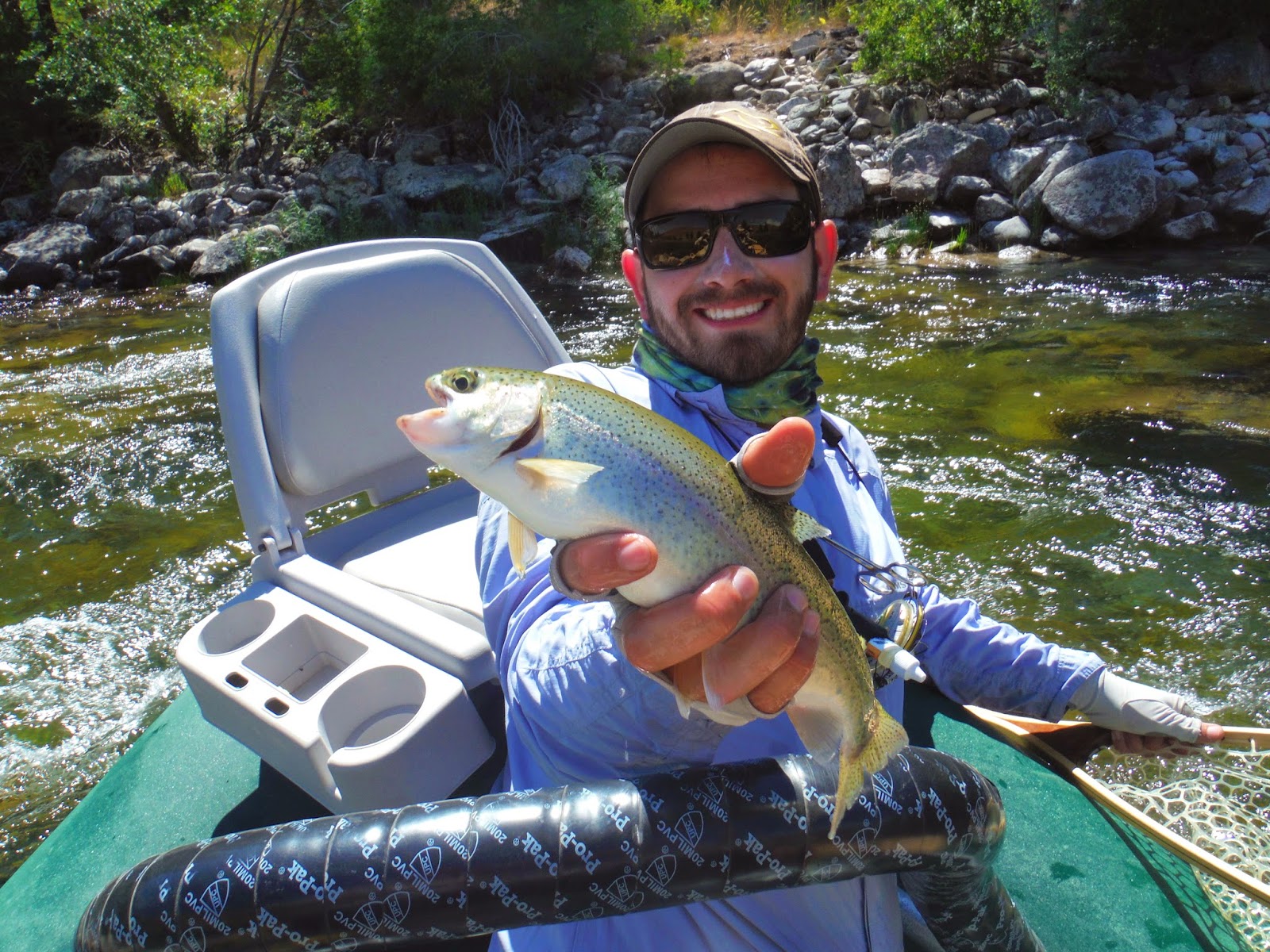 The fish were slamming my royal chubby, and Rick was sure taking notice.
“Erik, what do you say those fish are taking that Royal chubby for?” Rick asked.
“Hell if I know.” I said, “Do you want to try one?”
“Sure!” Rick said, as we switched places so he could have the front of the boat. 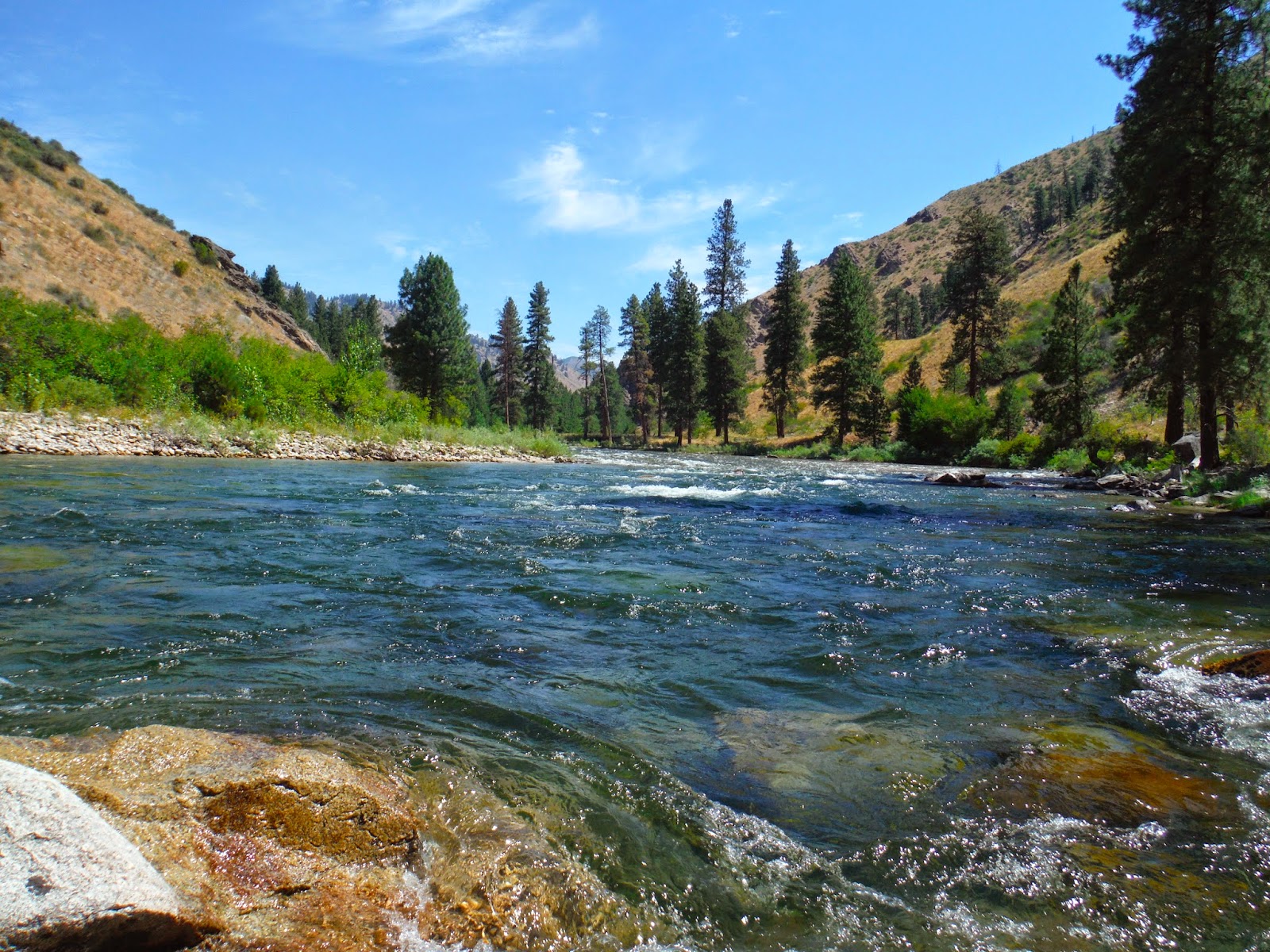 Rick was sure enjoying the royal chubby, and it got a hit almost immediately. Every time I took out my camera to get a picture, the fish would come unbuttoned or slip away.  While I had my camera out, I noticed both Grajcar brothers looking like they had taken fashion advice from the Island of Dr. Moreau. 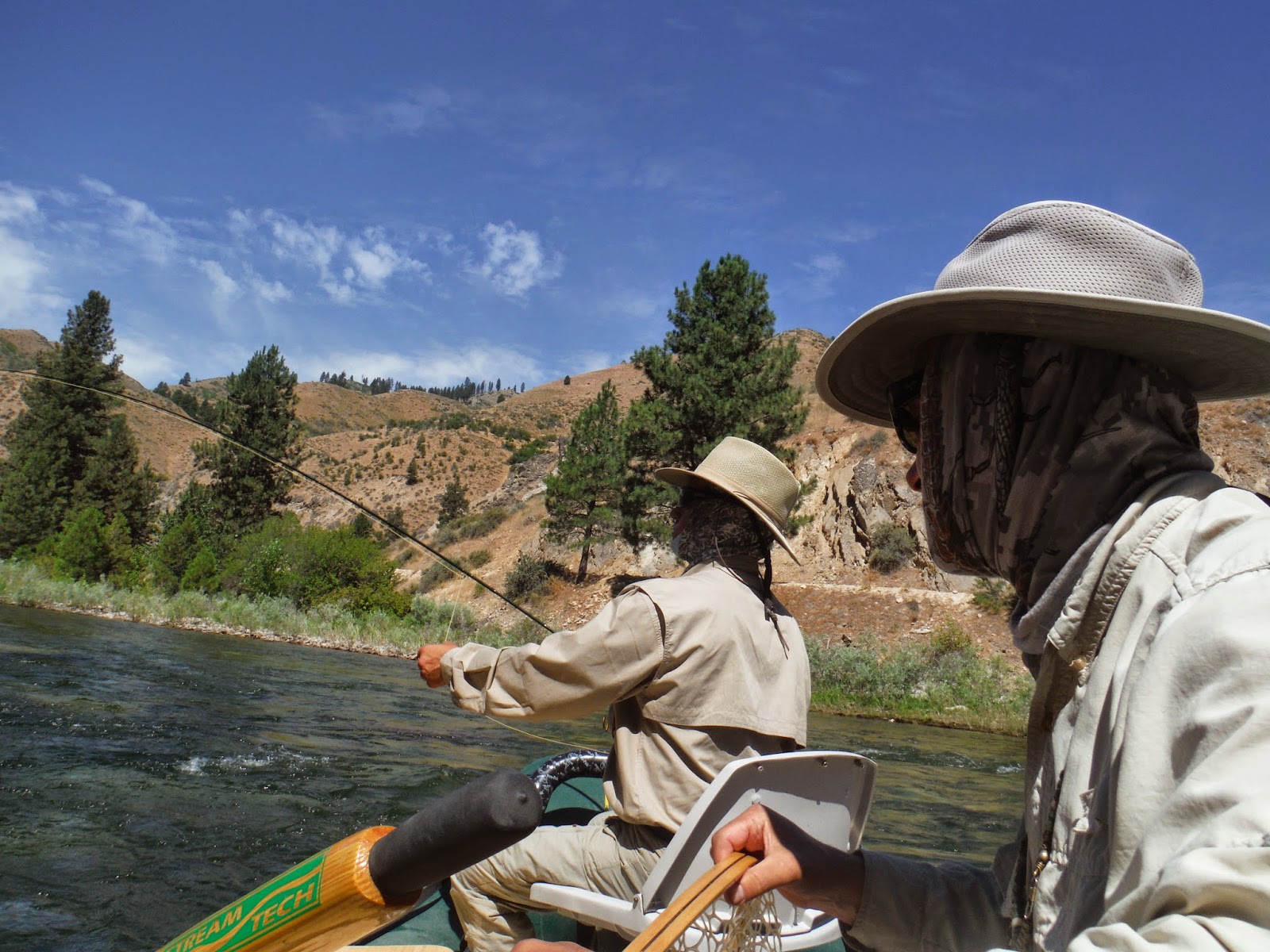 Mark parked the boat to do some wade fishing.  He walked downstream while I walked up; Rick stayed in the boat, because he was tying on his royal chubby. 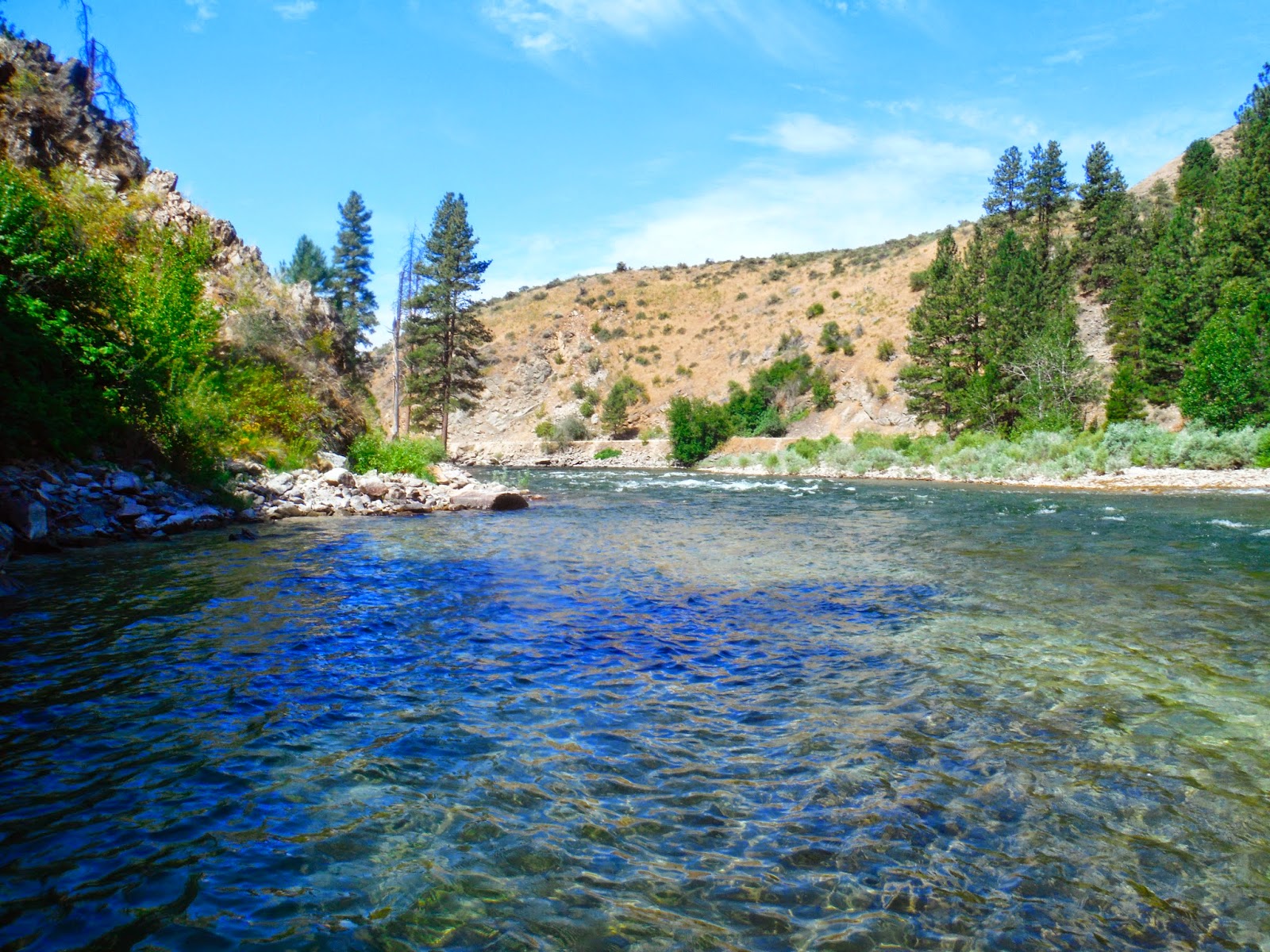 I switched my fly to a purple chubby, and it was no surprise that the fish hit that too. 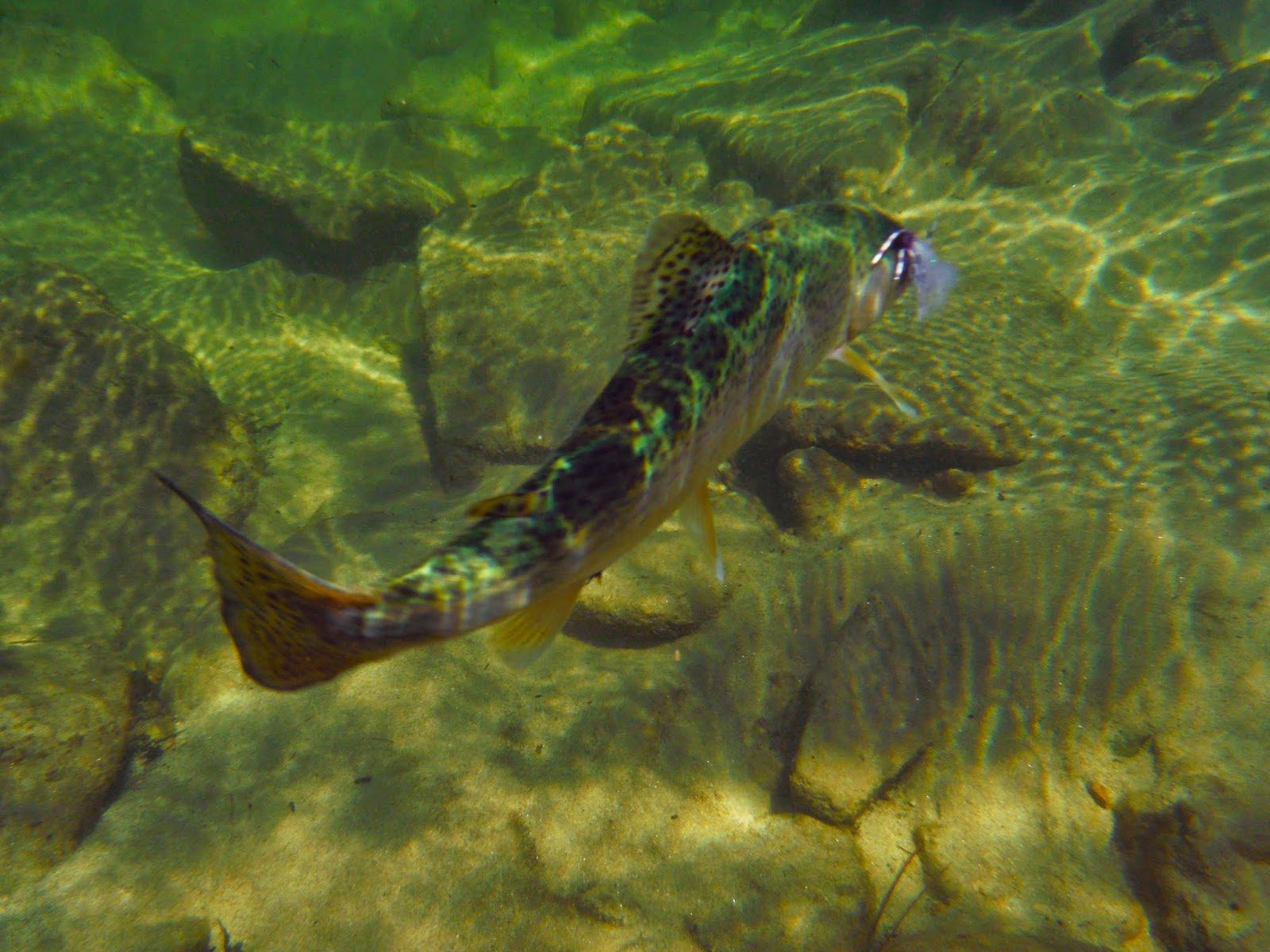 Fish after fish were slamming the purple chubby, I almost felt bad for the fish… Almost! 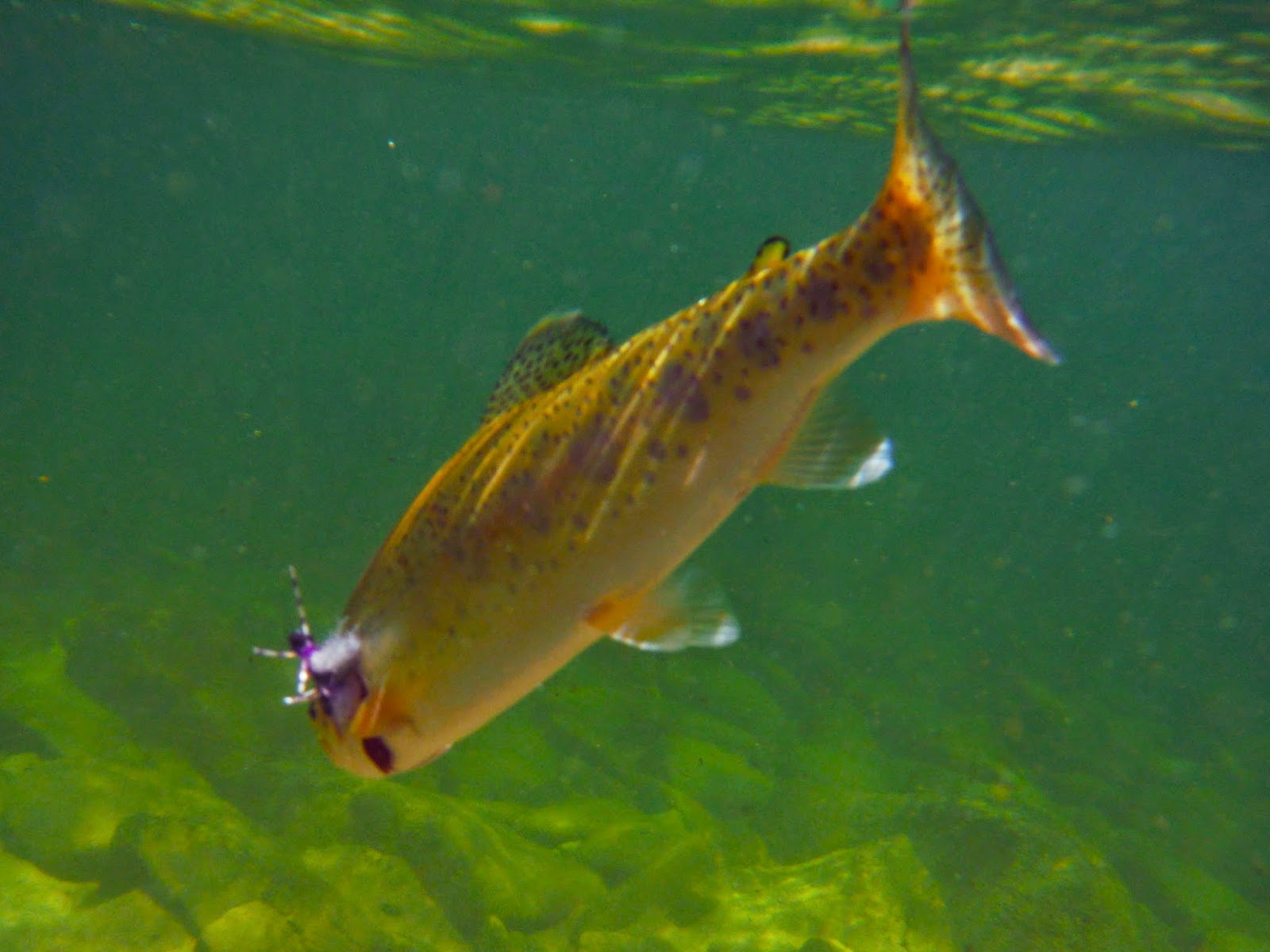 For a good portion of the float, both Mark and Rick insisted they row and I continue fishing.  I was feeling a bit bad about it, so they finally let me get behind the sticks.  As the oarsmen, it’s your job to back-row constantly; that way you provide the anglers with a nice shot at some fishy water. It’s also your job to keep your eyes on the water so you don’t run into any rocks that may cause a problem.  Despite my responsibilities, I couldn’t help but watch Rick’s fly as it floated over some nice water.
“Come on fish!” I yelled, “Eat that fly!” After nothing came up, Rick casted again.
We approached a more narrow section on the river, and one side looked particularly fishy.
“Someone hit this bank over here. It looks good!” I yelled, as I oared the boat into position.  Both Rick and Mark turned to cast, and Mark got a hit! 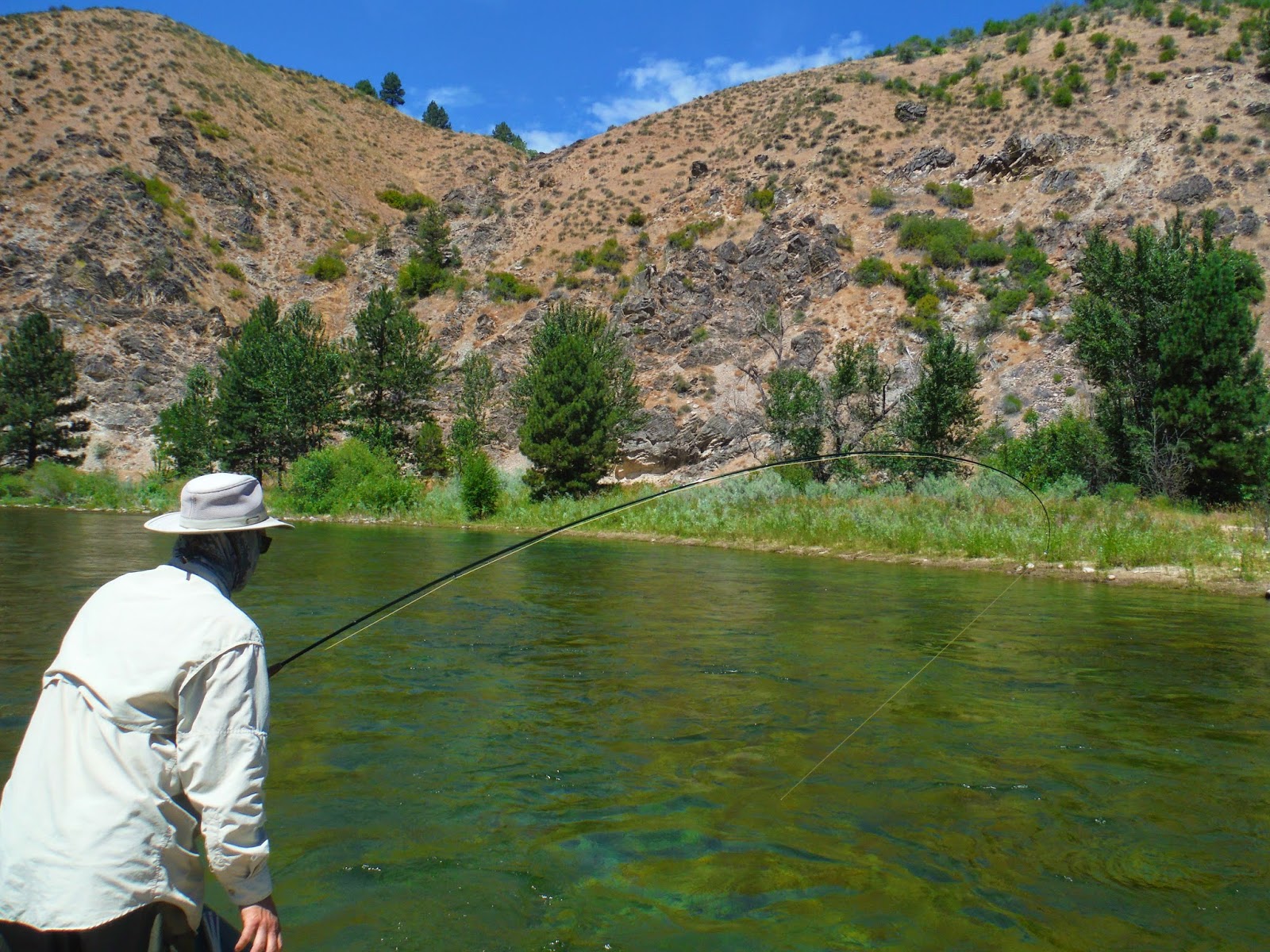 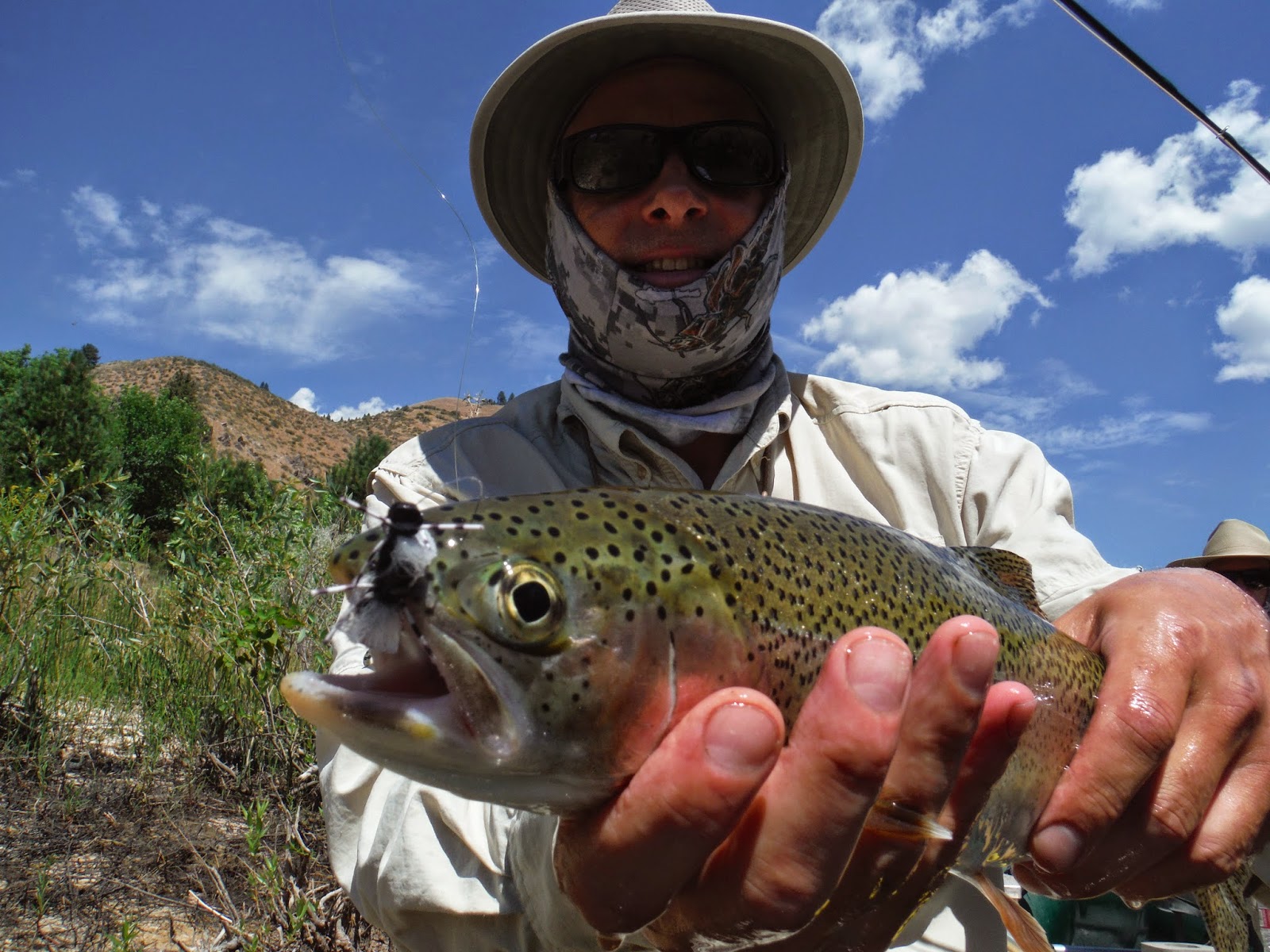 Rick had already caught a number of fish, but I had yet to get a shot with my camera.  On a free-flowing stream like the Middle Fork, the best place to cast is off the bank, a few feet where the water turns to a darker shade.  The fish will be holding there because that’s where the oxygen is.  With no explanation of this, I saw that Rick was making excellent presentations with his fly, only I felt they were a little too close to the bank.  If Rick were casting on a river like the South Fork of the Boise, his flies would be dead on. A tailwater fishery, like the South Fork, is kept cold and therefore the water that is right up against the bank is well oxygenated.
“Rick, cast your fly where the water changes color.” I barked, and he did.  A fish took on his second presentation and he brought it in and released it quickly.  We neared another nice spot to do some walking and wading, so I parked the boat and we started fishing the small channel nearby. 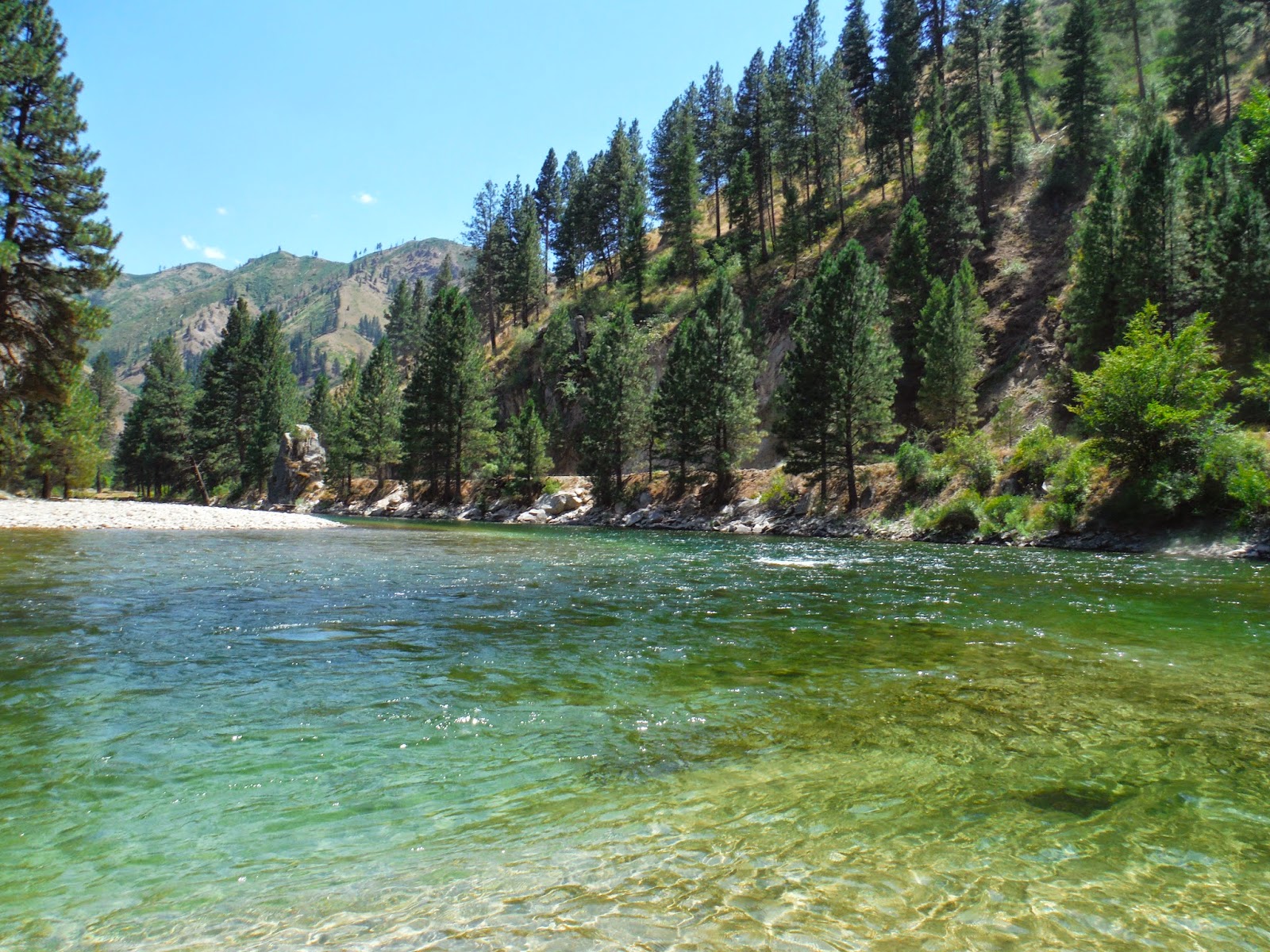 I had moved downstream to cast at a rising fish when I saw that Rick had a fish on!  Judging by the way his rod was bending, I could tell he had a nice fish. By the time I had reeled in my line, Rick had the fish almost in, but not before I snapped a shot of the fight. 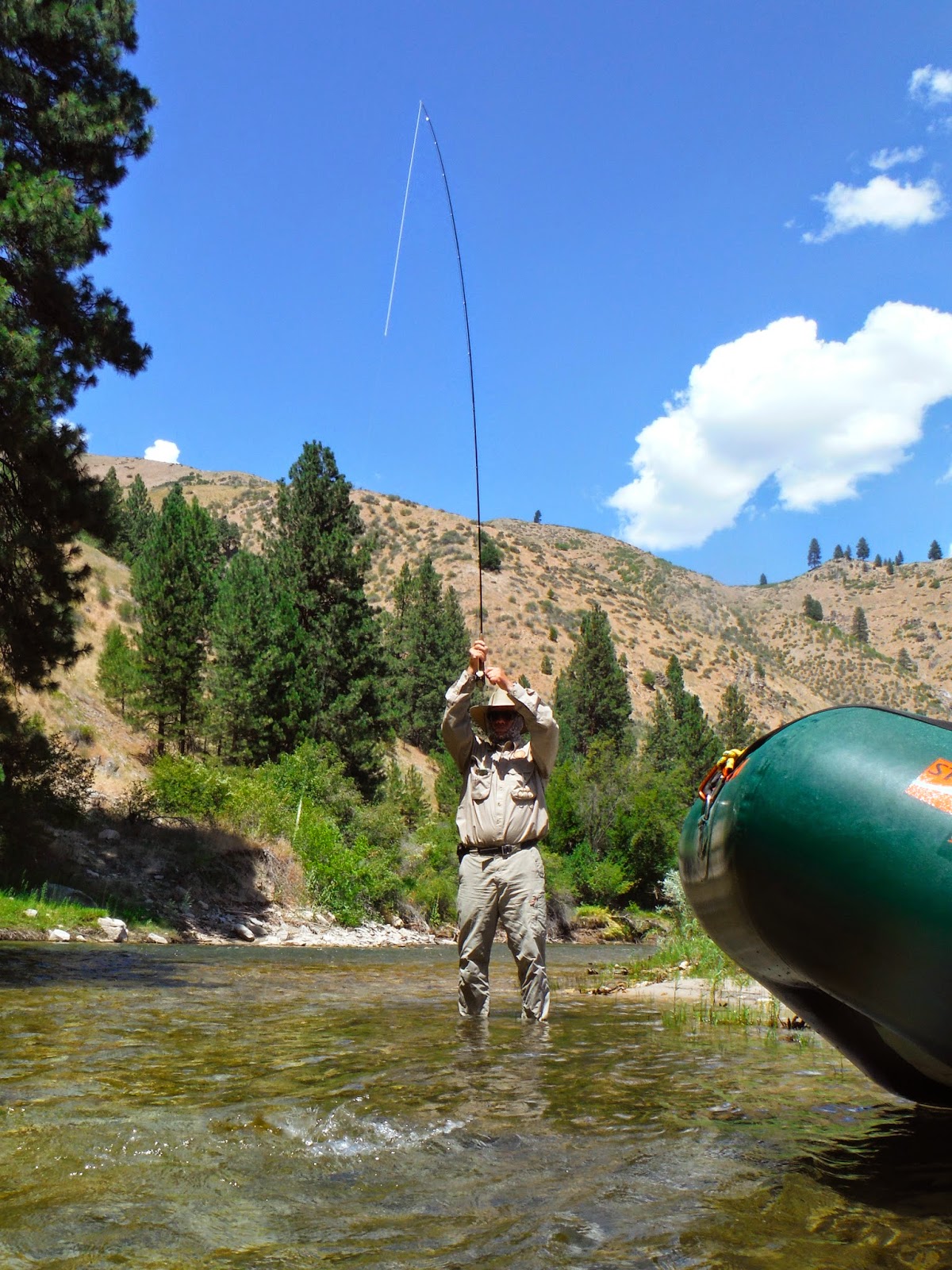 The fish was landed and the colors were unmistakable.
“It’s a cutthroat!” Mark yelled, as I scrambled over to take a picture of it.
“What did it take?” I asked.
“A royal chubby.” Rick answered, getting the fly out of the fish’s mouth.  Rick quickly placed the fish back in the water.
“Do you want a picture?” I asked.
“Na, I would rather get it back in the water.” Rick said.
The cutthroat was slowly making its way back into the main stream, but not before I was able to snap this shot. 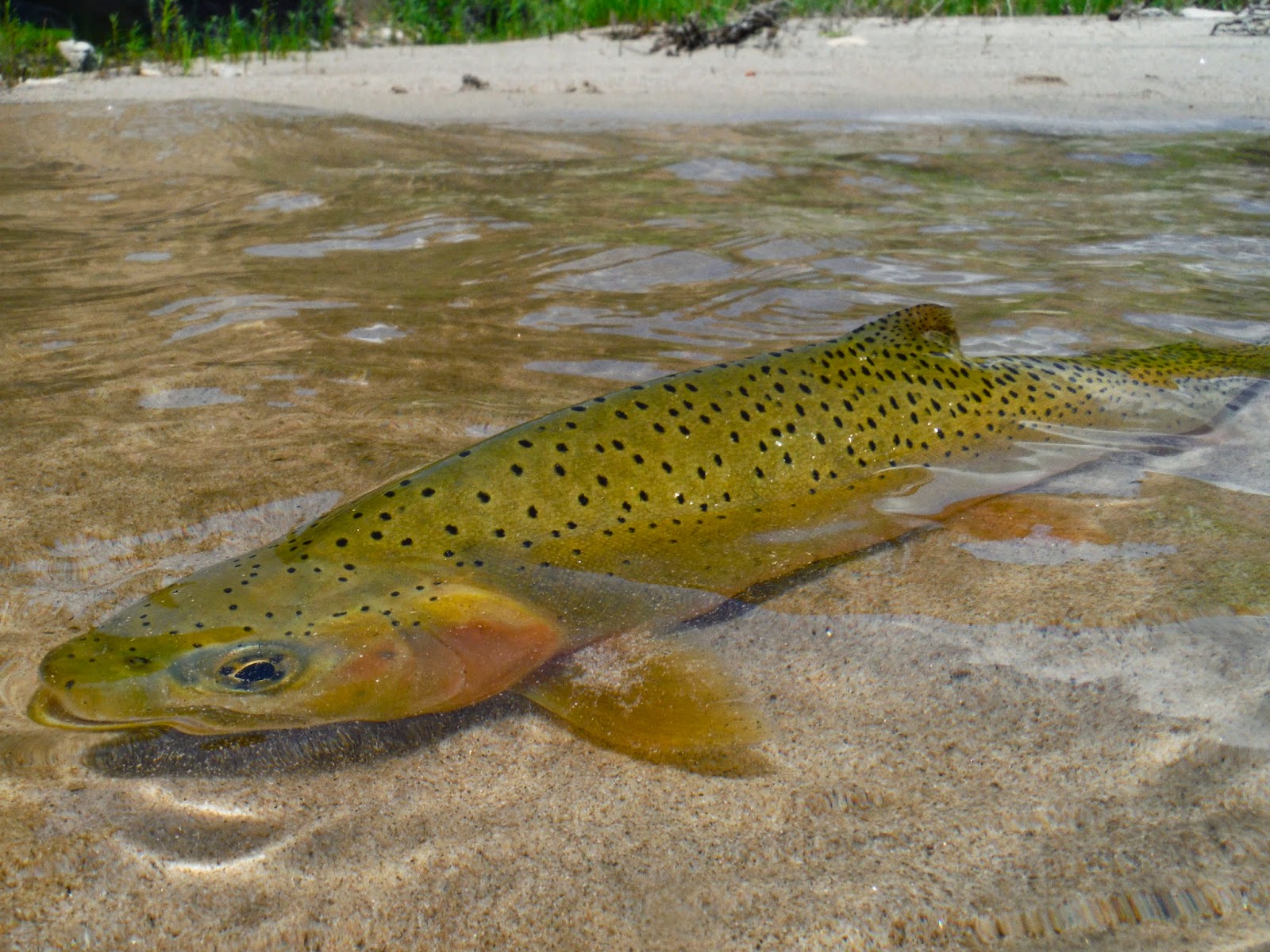 Mark took the oars as we set off to fish the last section of water.  It  had already been an extremely productive day, and Mark was getting more animated as he rowed the raft.
“Hit this pocket here!  Someone!” Mark yelled out happily, gesturing to his left.  I flicked my line over my head, and landed my fly right in the pocket.
“Good shot, Erik! WOW!” Mark said. With every moment my fly was on the water, Mark got more excited. “Come on fish! Boom! Boom!” My fly sat in the water calm, untouched.
“COME ON FISH! HIT THAT!” Mark yelled in the direction of the fly.
“Thanks, Mark. Great suggestion.” I said, as Rick chuckled in the front of the boat. 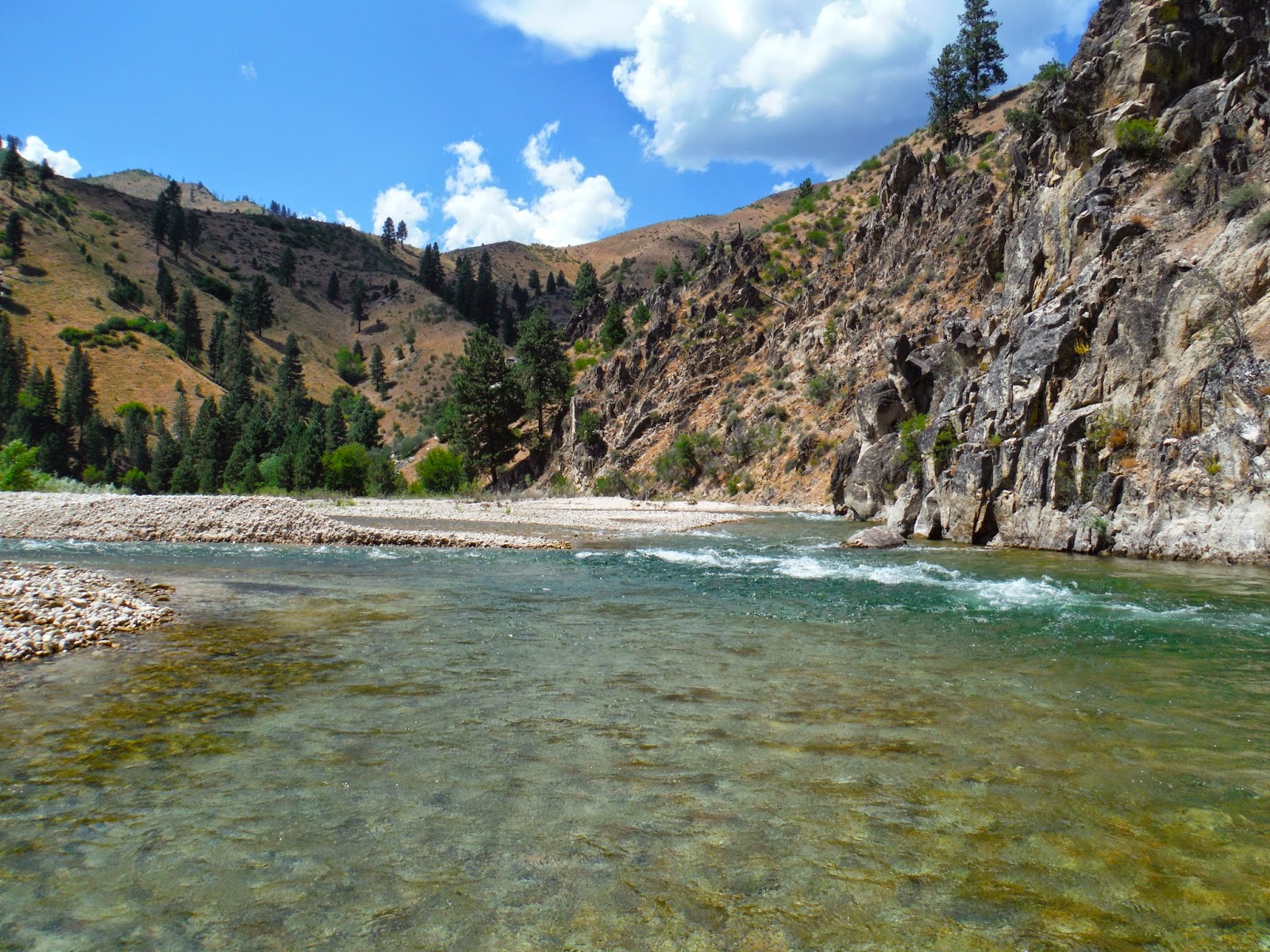 In Mark’s defense, fishing had slowed down the further downstream we got from Twin Springs.  Rick was still pulling in fish as we neared the takeout.
“Why would anyone want to leave this place?” Rick said, coming around the bend to our stopping point. We all felt the same way, but knew we had to return to civilization. 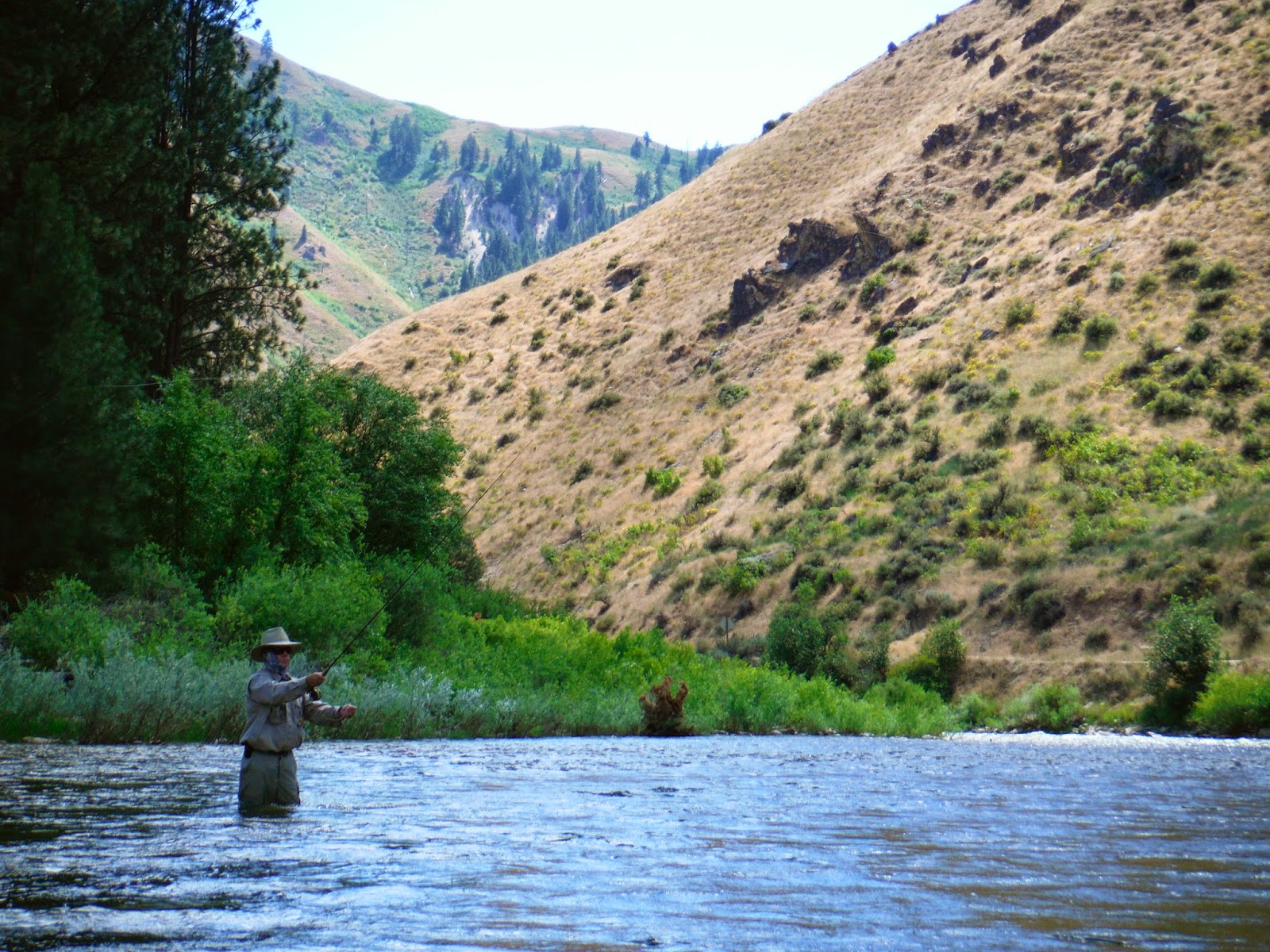 Mark rode his bike to pick up his truck, and I felt a little bad that I didn’t make the shuttle.
“It’s ok.” Rick said, “Mark’s a doctor, and needs to lead by example.”
We finished the day off with some wade fishing, and on our way across the river, Rick took a tumble.  I looked over just in time to see his hat was the only thing out of the water.
“I was just trying to keep the mosquitos off me.” He said, smiling. “That was on purpose.”
“It looked like it was on purpose!” I said back.
Mark made it back in no time at all, and we packed up our gear to head home, ending a beautiful and fantastic day fishing with the Grajcars.

1 thought on “Fishing with the Grajcars”