Skip to content
Jim Kazkoff, Mark Grajcar, and I headed to West Yellowstone, and were making good time.  The closer we approached to our destination the more construction signs we saw, warning us there would be 30 minute delays between Ashton and Island Park, and that was something we just didn’t have the patience for.
“Hey guys!” I said, getting Mark and Jim’s attention. “Let’s take the Mesa Falls exit and go around the construction.  And on the way we can feed the fish!”
“That sounds like a good idea. I don’t want to be stuck in traffic.” Jim said, adding, “But I don’t think this is the right way to feed the fish.”
“Trust me, it’s the right way.” I said with confidence.
Jim took the right turn at Ashton towards Mesa Falls, and I remembered something…
“We need to stop at that gas station!” I said quickly, pointing.  Jim applied the break, rather quickly, and the sudden stop made us lurch forward a bit.  After stopping, I jumped out and bought three loaves of bread.
“Whoa!  What are you going to do with all that bread?!” Mark asked.
“This is what we are feeding the fish, and I didn’t want to share my loaf so I bought us each one.” I explained as we drove on. 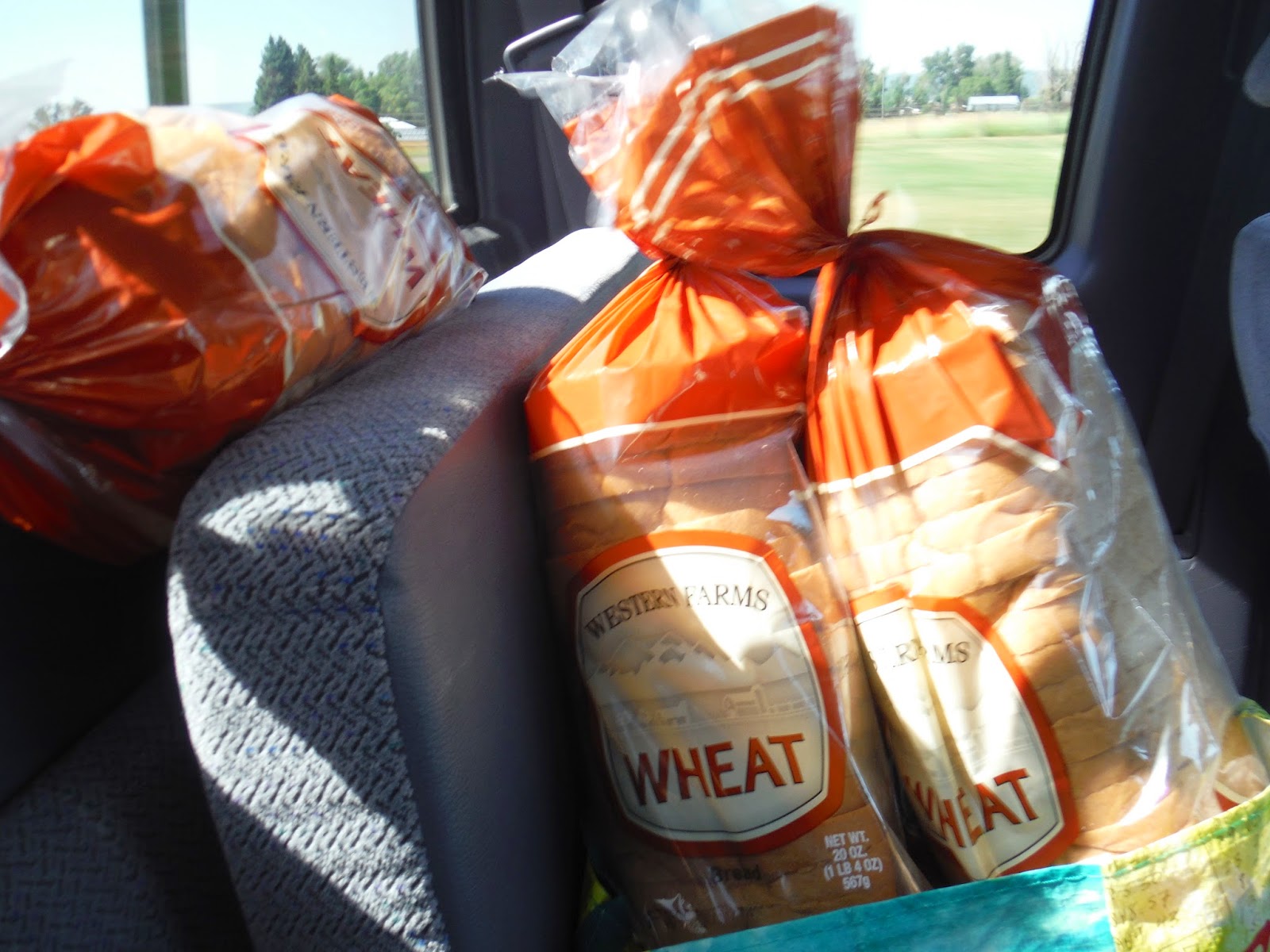 The warm river section of the Henry’s Fork flows right next to the Three Rivers Ranch, and just to the left is a small dock to stand on and feed the fish.
“That is where we need to stop.” I said, pointing to the left side of the road where there was room to park.  Jim hit the breaks, making us all lurch forward again.
“Oooo…” I said, as my seatbelt did its job. “Another Jim Kazkoff signature stop.”
The three of us hopped out of the truck and walked over to the dock.
“I don’t see the fish.” Mark said, looking into the water.
“Watch this!” I said, grabbing a slice of bread, tearing it up, and launching it in the water.
“Whoa!” Mark yelled, as the fish began devouring my offering.
“That’s cool!” Jim added, and they both started chucking bread over to the hungry fish. 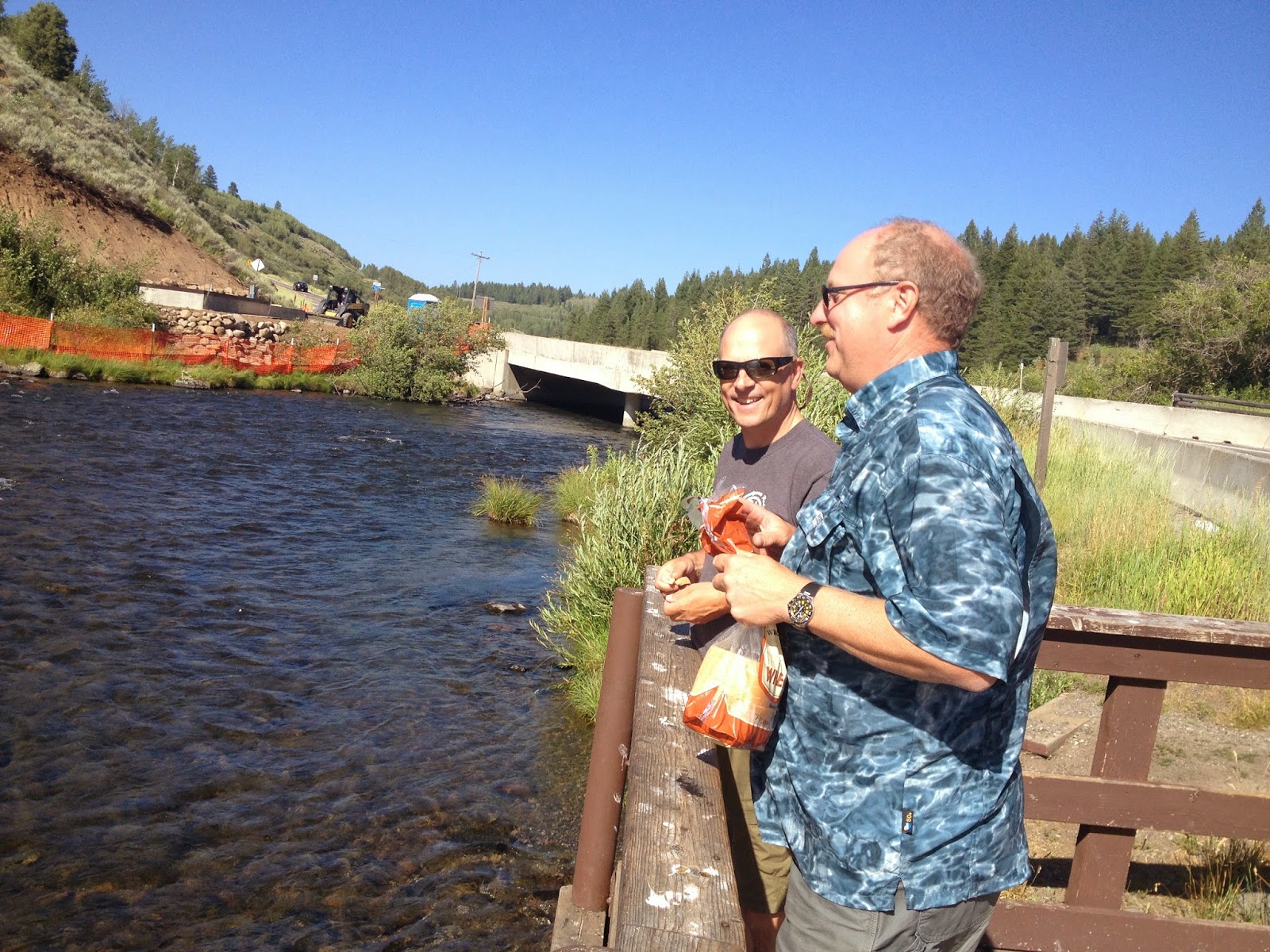 “Look at that one!” Mark yelled, pointing to a fish. “That’s a big-ass fish!” The three of us couldn’t throw out bread fast enough, and the hungry fish were darting left and right to grab every piece that hit the water.
“Well that figures.” Jim said shaking his head. “Some of these fish are refusing my bread.” Both Mark and I erupted into laughter as Jim tossed out another small piece of bread.  The large fish he aimed for came over and, sure enough, snubbed his bread.
“See!  I can’t get a break!” Jim said with a laugh.
The loaves went fast, and a fun time was had by all.
“We better get to Henry’s Fork Anglers before they close.” I suggested, and off we drove.
Colton Schofield was there to help us, and after we picked up our Montana fishing licenses we were ready to get back on the road to West Yellowstone.
“A buddy and I are going to fish the Box Canyon when I get off work.” Colton said, just before I took off. “You guys should join us!”
“Hold on, Colton.” I said, and ran out to ask Mark and Jim if they were up for an impromptu float down the Box Canyon.  After a quick bite to eat and a few wrong turns, our boat was launched near the Island Park Dam, the start of the Box Canyon. 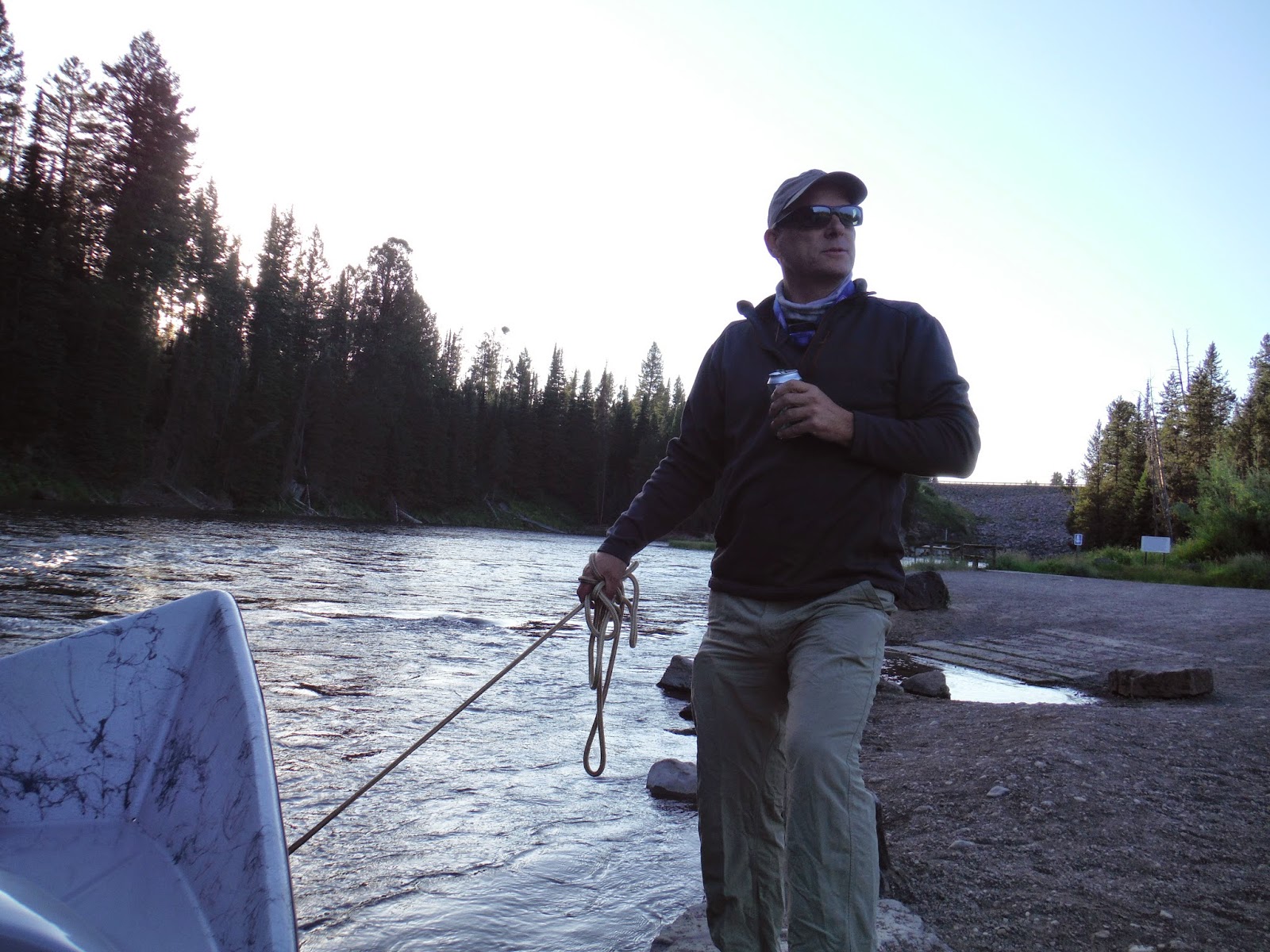 We rigged up quickly as Jim parked the truck.  Colton suggested that nymphing would be the best way to fish the Box before he launched his boat… That’s right, young Colton of 19 bought himself a used drift boat, and was loving every bit of it.  He and his buddy, Crazy Paul, got a jump start on us as Jim made his way down to the drift boat. 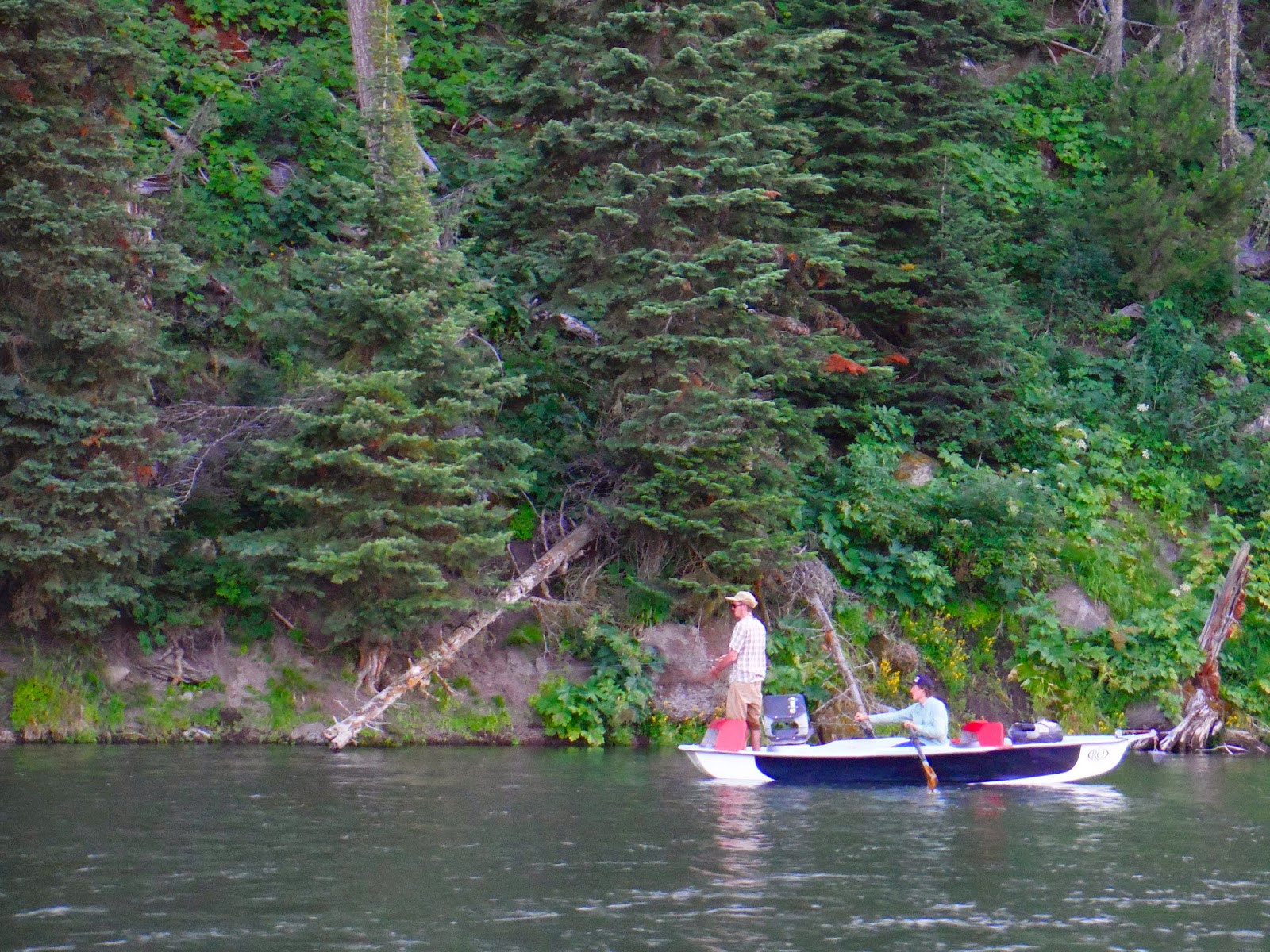 I had fished the Box Canyon before, so I took the sticks as Jim and Mark fished the first stretch. 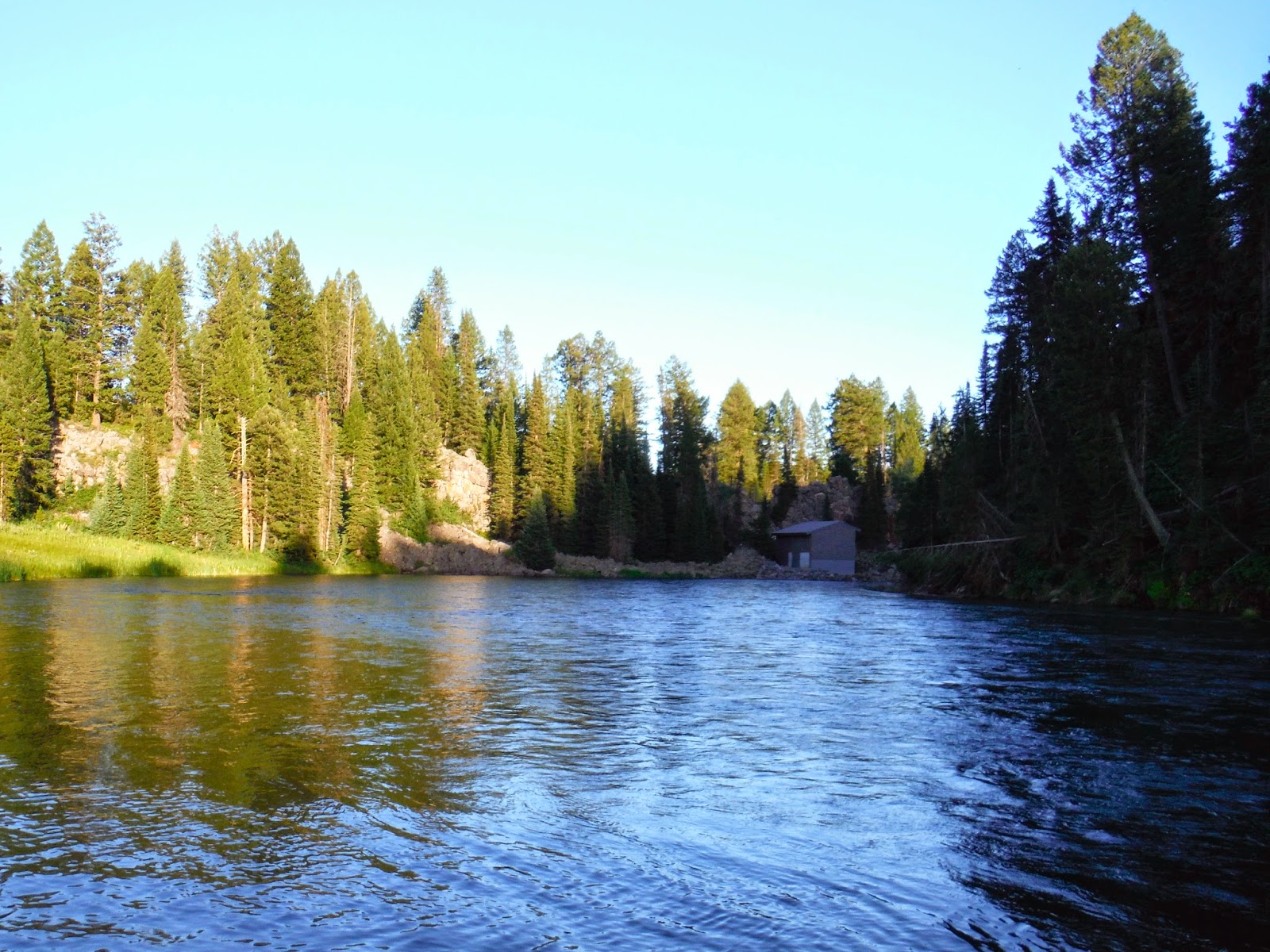 “I got one!” Jim said, as he pulled up his rod. I looked over and saw a fish about the size of a keychain wiggling like mad.
“Woah!” I said, “Do you need me to anchor?”  Jim laughed as he unhooked his little fish, and it darted back to its home.  With the water flowing fast, back rowing was a must.
“There we go!” Mark yelled.  I looked back to see his nine-and-a-half foot six weight was doubled over.
“Alright!” I yelled, and dug deep with the oars to slow down the boat so Mark could better control his fish.
“Oh no!” Mark yelled. “It got off,” he said, as he slammed his sculpzilla on the water in frustration.
“Jim, what’s going on up there?” I asked.
“I lost my dropper.” Jim said, and was tying another one on as fast as his eyes would let him. 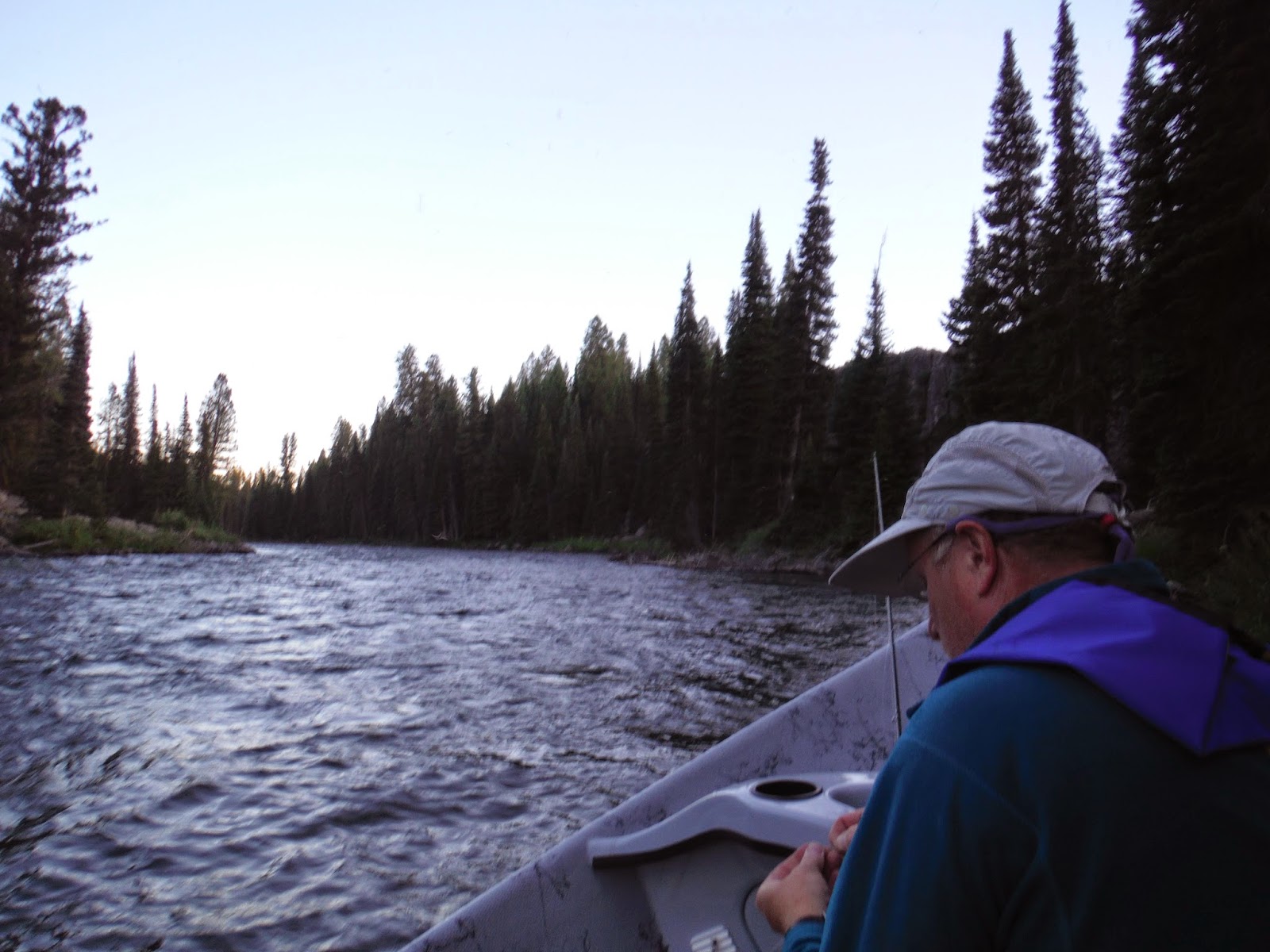 It was my turn to fish, and we didn’t have much sunlight available.  With Mark’s success on the sculpzilla, I tied one on and launched it in every spot I thought a fish would be holding.  Nothing was taking my streamer, and Jim was having no luck with his nymph.  I jumped behind the oars again while Mark took the front of the boat. 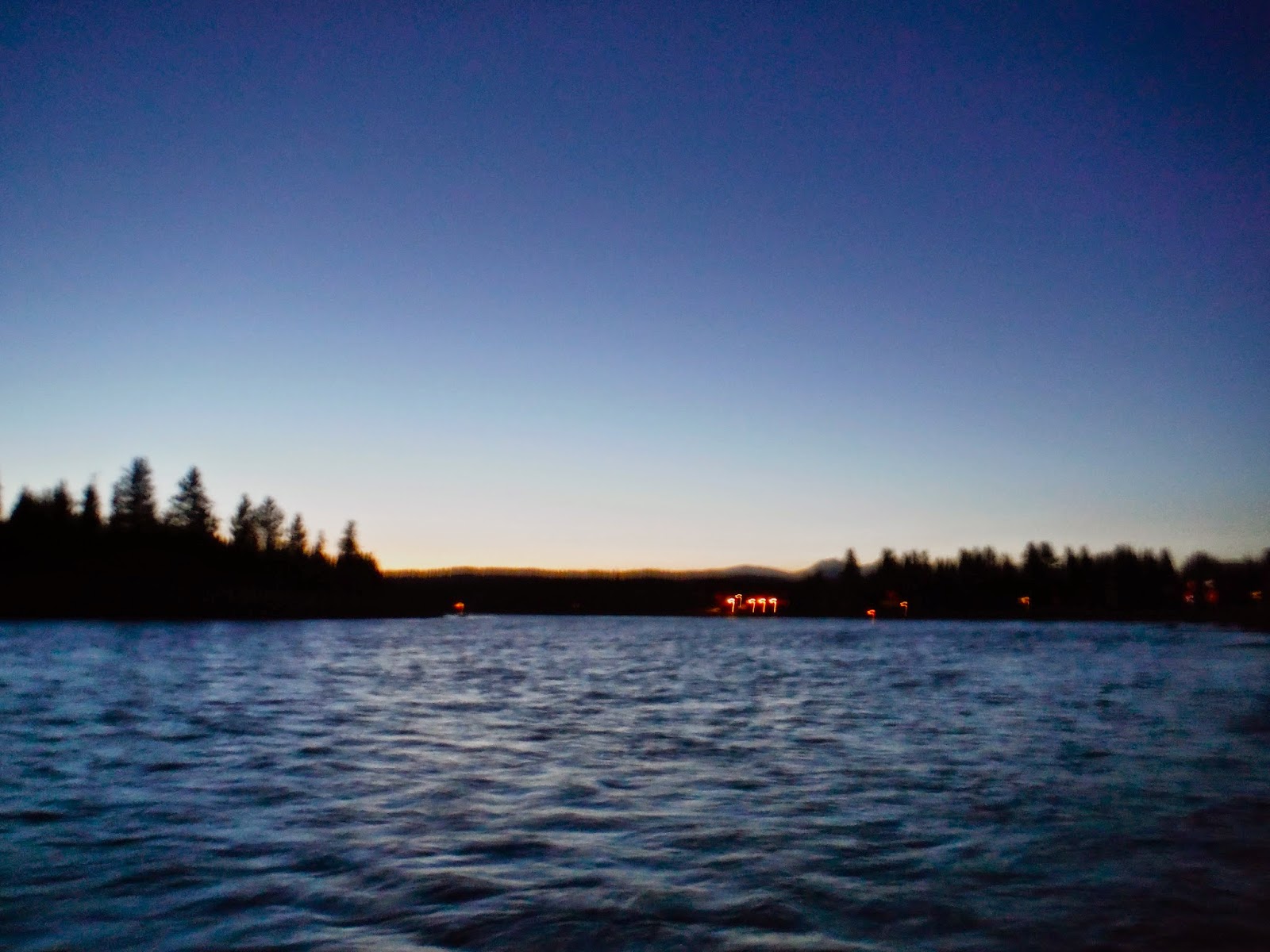 Night fell fast, and I had started paddling forward to get us to the boat ramp quicker.  Jim and Mark didn’t let up, fishing until they couldn’t see anymore, and then some. 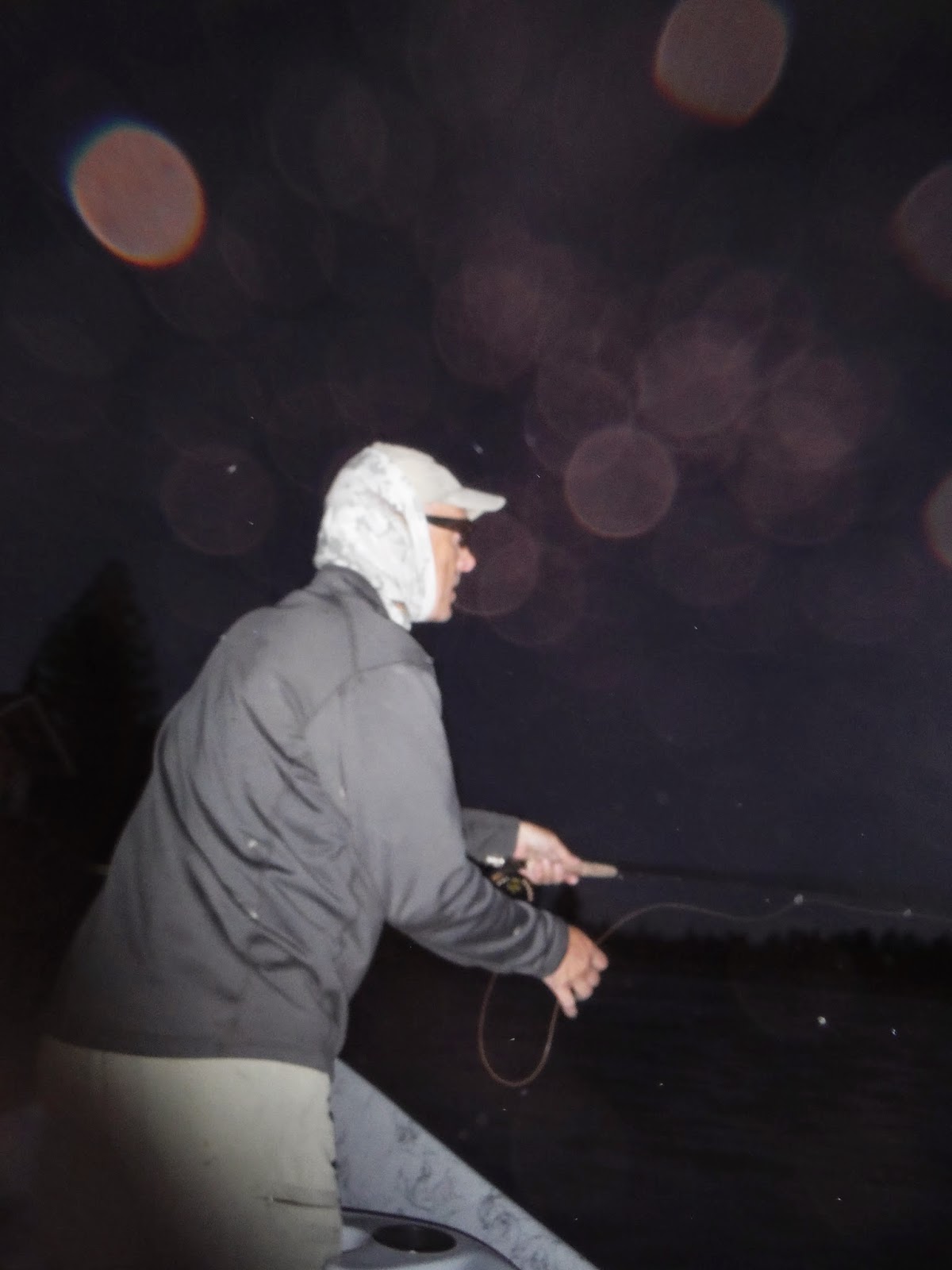 Jim jumped out to stop the boat as we piled into the takeout point.  Colton’s buddy, Crazy Paul, had his truck there for a shuttle.  Jim jumped in with them, and Mark and I stayed behind with the boats.  The temperature dropped as Jim, Colton, and Crazy Paul returned to pull the boats out.
“We are going to get dinner at a small place nearby.” Colton invited, as he pointed at a lodge in the distance.
“We would love to, but we still need to get to West Yellowstone tonight.” I said, packing up the rest of our gear.
“Thanks for the invite tonight. It couldn’t have happened without you guys.” I said, as we said goodbye to Colton and Paul.  We arrived at our destination near midnight and unpacked the truck quickly.  We headed to bed soon after, in preparation for the next day’s fish on the Madison!

2 thoughts on “To West Yellowstone”