Skip to content
Needless to say, I found myself at Rocky Ford Creek for a day of fishing before heading off to my buddy, Tom Los’s wedding. 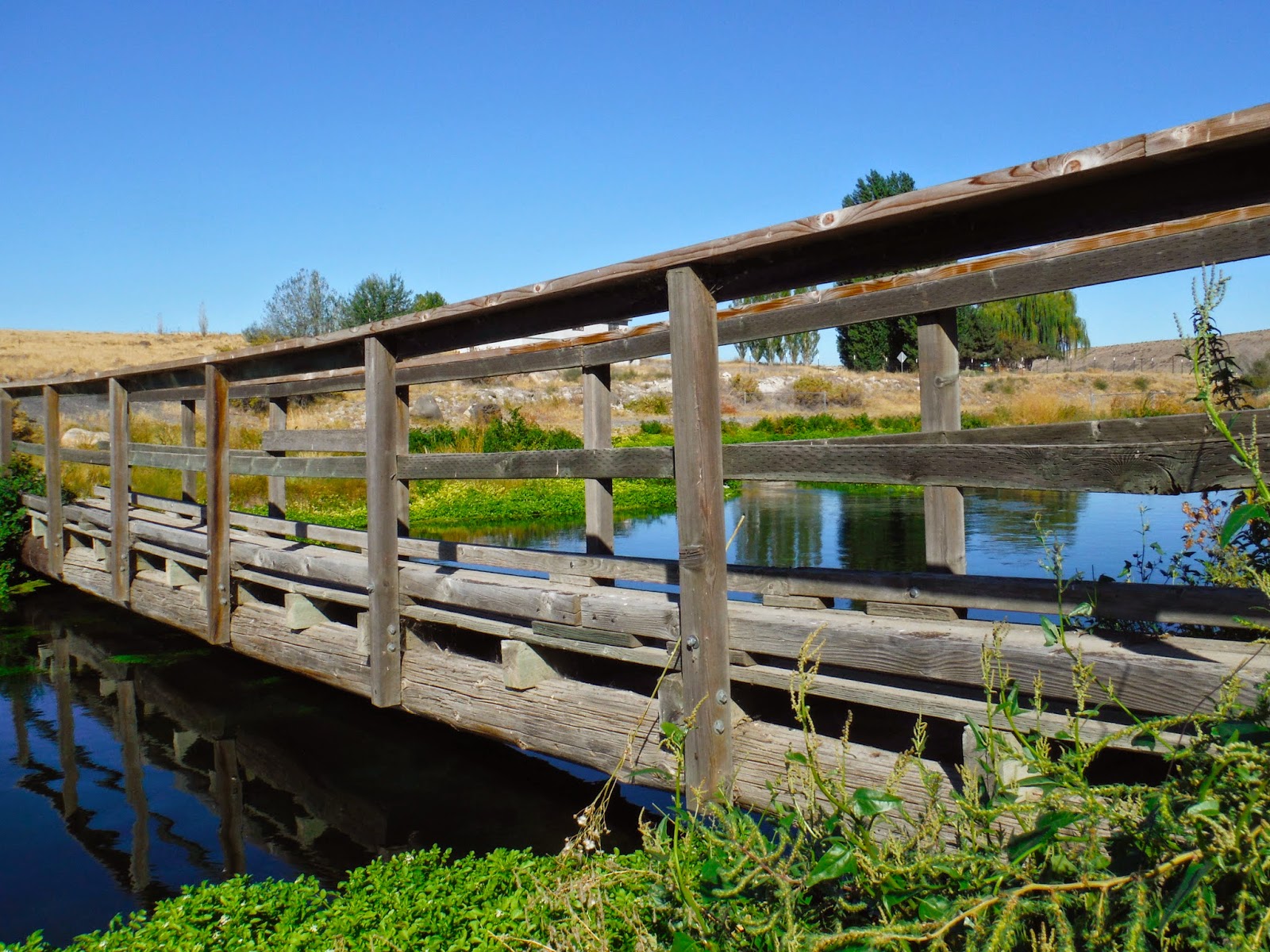 I arrived early and geared up fast, and although there is no wading at Rocky Ford, the sight of stinging nettles inspired me to wader up anyway.  I started with a dali llama streamer, which got me into my first fish in no time. 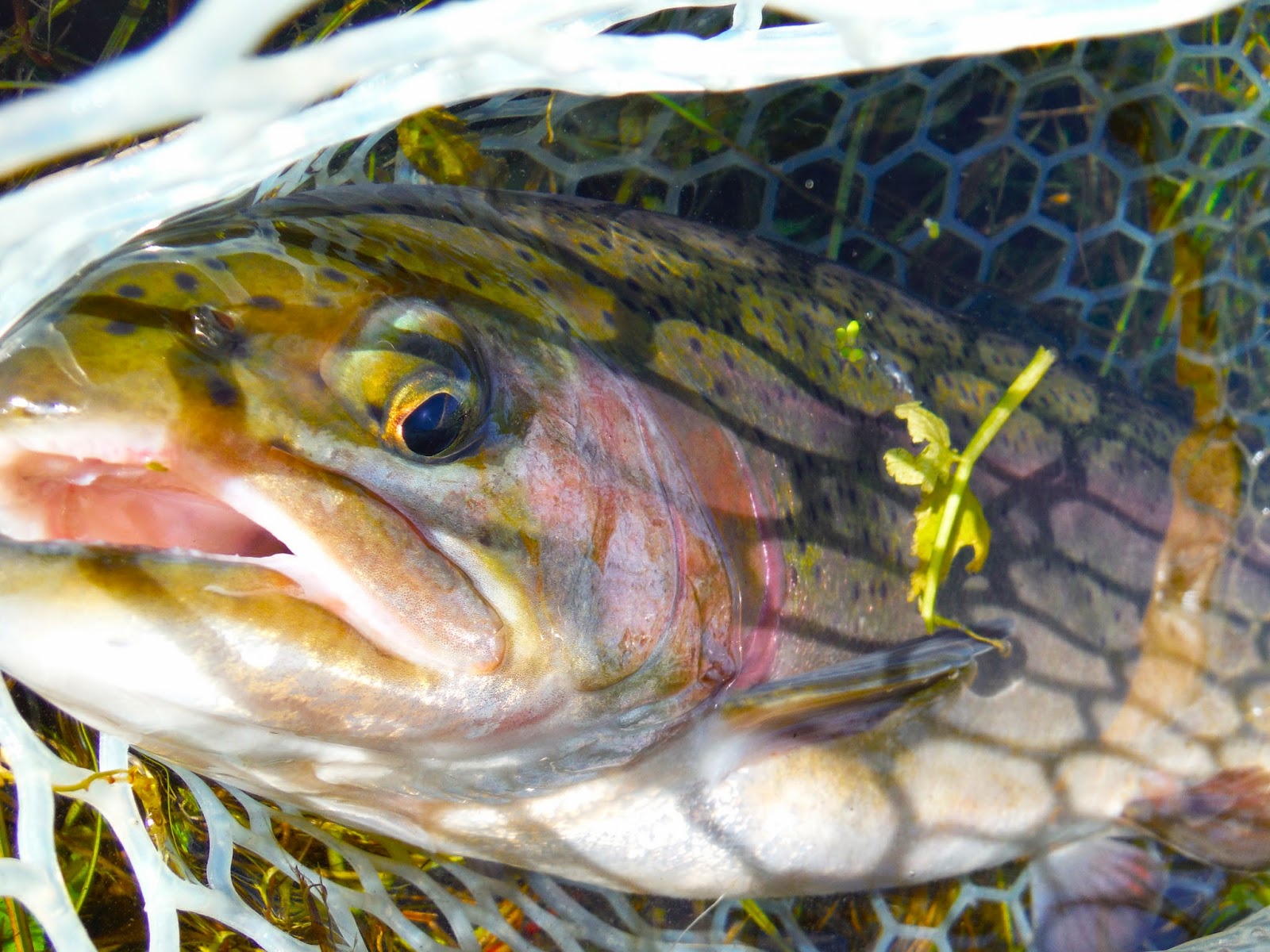 Two younger guys saw me fighting my fish and came over to talk. They were from Spokane, WA, and new to fly fishing.  Naturally our conversation revolved around the basic fundamentals of fly fishing Rocky Ford Creek, and the idea of fishing a spring creek in general.
“Sight nymphing is the most effective way of fishing the creek.” I explained, as they listened.  Standing on the bridge, I pointed to a fish slightly downstream from us.
“I bet you can catch that fish right now with a nymph.” I said, leaving them with the confidence to catch the fish. 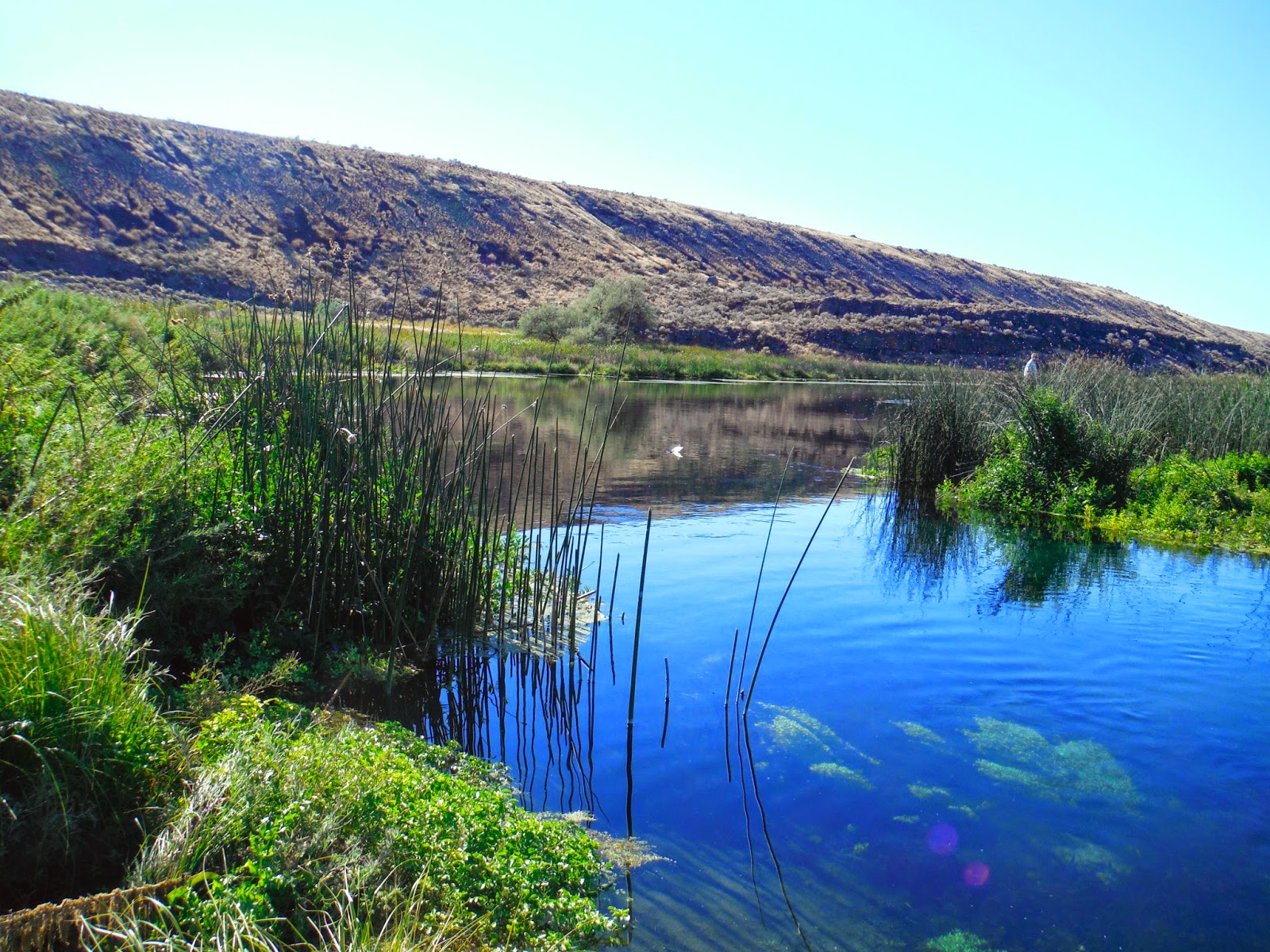 After thoroughly fishing a small area with my dali llama, with only a few bumps to speak of, I walked back to the bridge where I had left the two guys from Spokane.
“Anything yet?” I asked.
“No.” He said.
“Let me see your fly.” I asked, as he pulled it up. I noticed there was no weight to his fly. I had forgot to mention how deceptively shallow Rocky Ford can look due to gin-clear water.
“Do you have a nymph with some weight?” I asked.
“Yeah, I think so…” He said, reaching for his box and pulling out a small, brassy nymph.
“Perfect!” I said, and rigged up his line, adding some smaller tippet. He plopped the nymph down, but was a little off on his presentation. I did my best to explain where to place the nymph, but one look from him suggested he didn’t quite understand.  He handed over his rod for me to demonstrate.
“Okay, the fish is about six feet deep, therefore I need to place my nymph a ways in front of the fish so that it has time to sink down to the fish.”
“Ok.” he said watching. I plopped the nymph into the water, and we both watched as it sank to the level of the fish. As the nymph neared the fish, the fish leisurely moved over to it.
“Ok, there it comes!” I said excitedly, as the fish ate the small nymph.
“And there’s your fish!” I said, setting the hook and handing the rod over for him to fight the fish.  He took the rod, and walked over to an easy spot to land the fish.  I took out my camera to snap a picture, and right when I did, the fly came unbuttoned from the fish’s mouth, ending the fight. 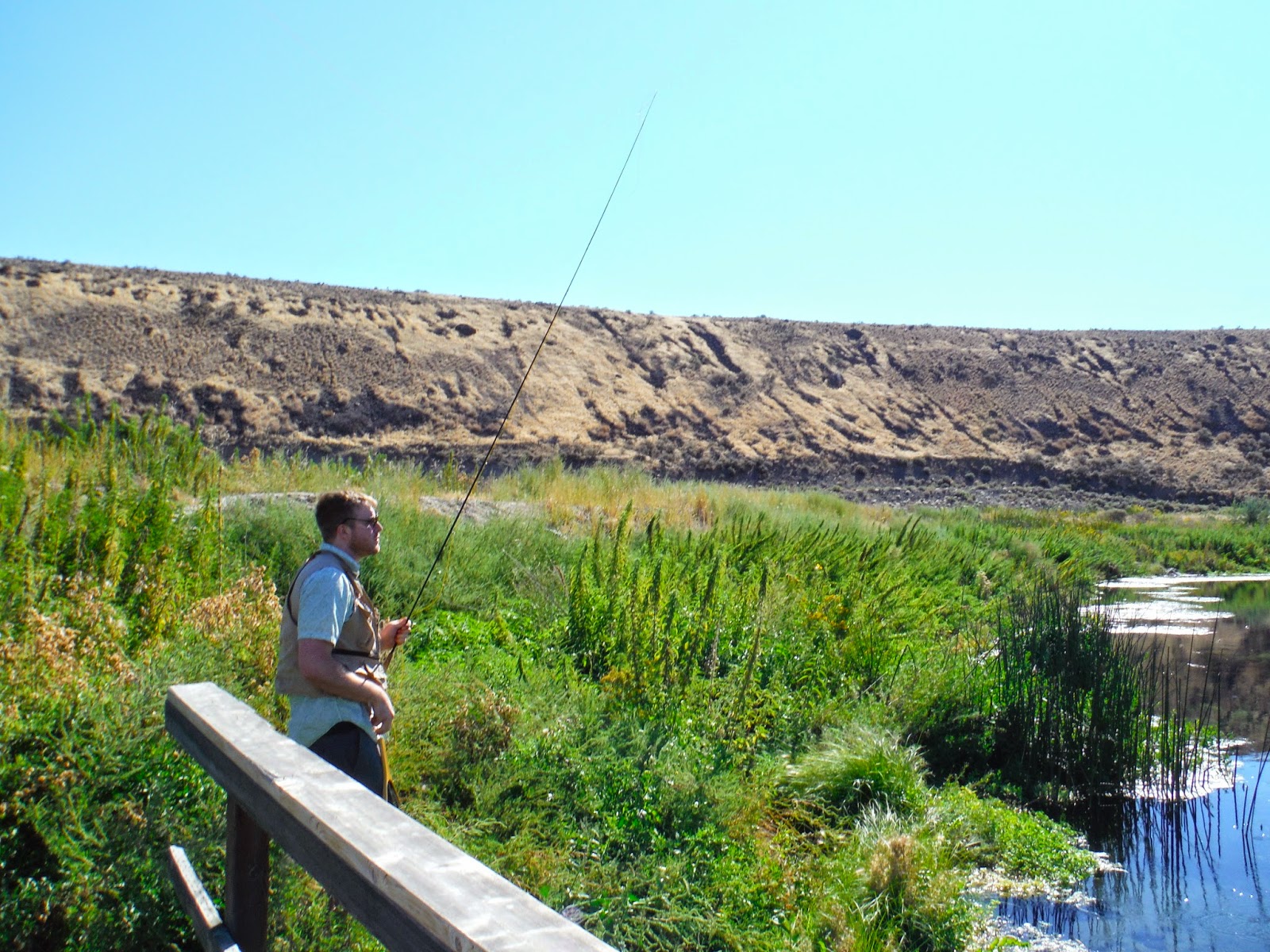 “That’s ok; these fish are still hungry and there is another one right here for you to catch.” I said, before walking up to the parking lot to greet my dad, who had finally made it down to fish with me. I rigged up his rod as he geared up, and soon we were fishing. 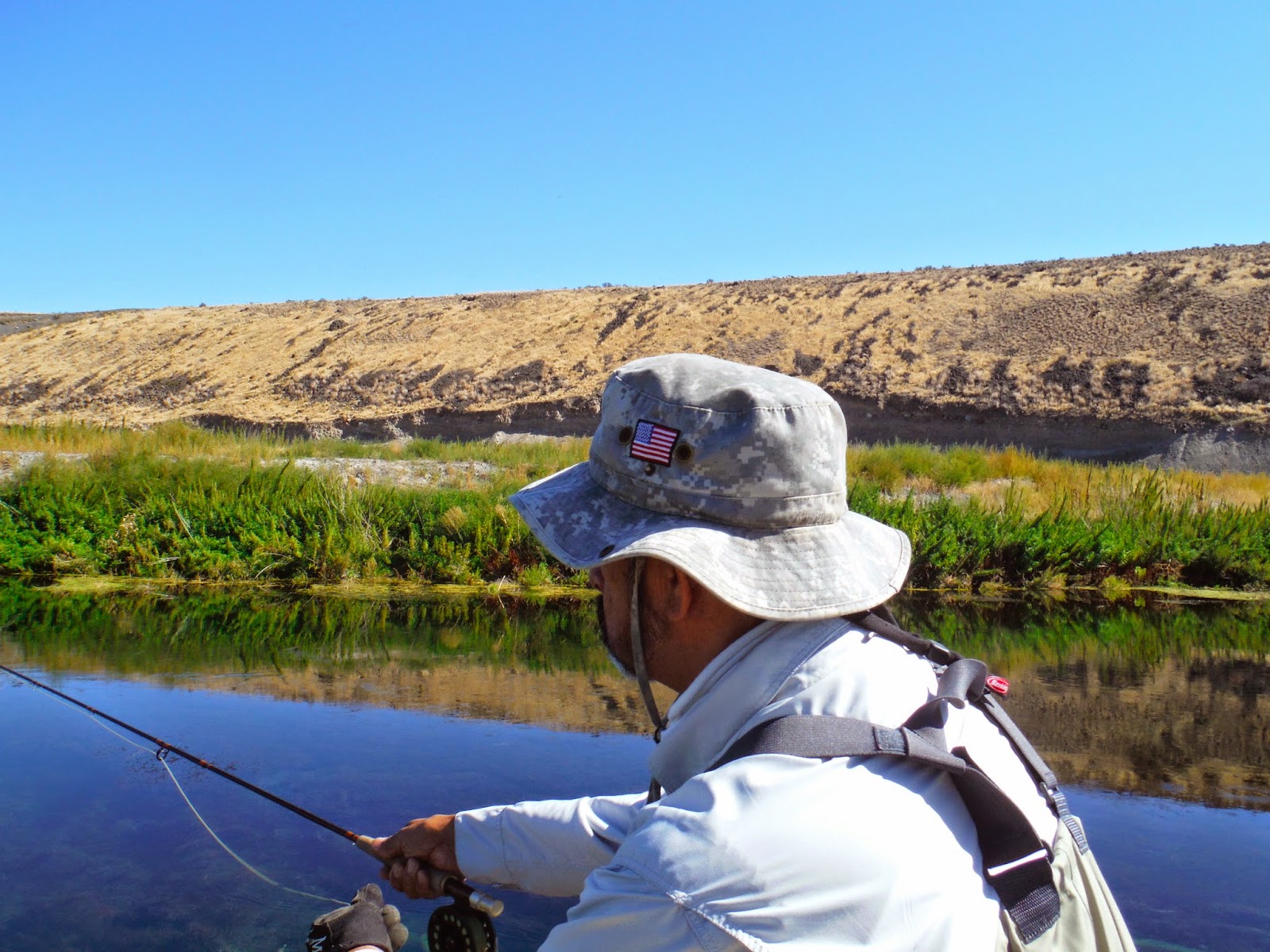 I watched as fish rose off in the distance and thought, what a great opportunity for me to introduce another gem in my fly box I call the PICO ANT!  With its small profile and wide-gaped low-viz black barbless hook, it was sure to fool even the most snobby of trout.  Well… this is it, I thought as I launched the pico ant out to the rising fish.  The small white wing on the back made it easily visible at 70 feet, and I breathed a sigh of relief as a fish ate it with no hesitation!  The thrashing fish got my dad’s attention, and he came over as I landed the fish and snapped a picture. 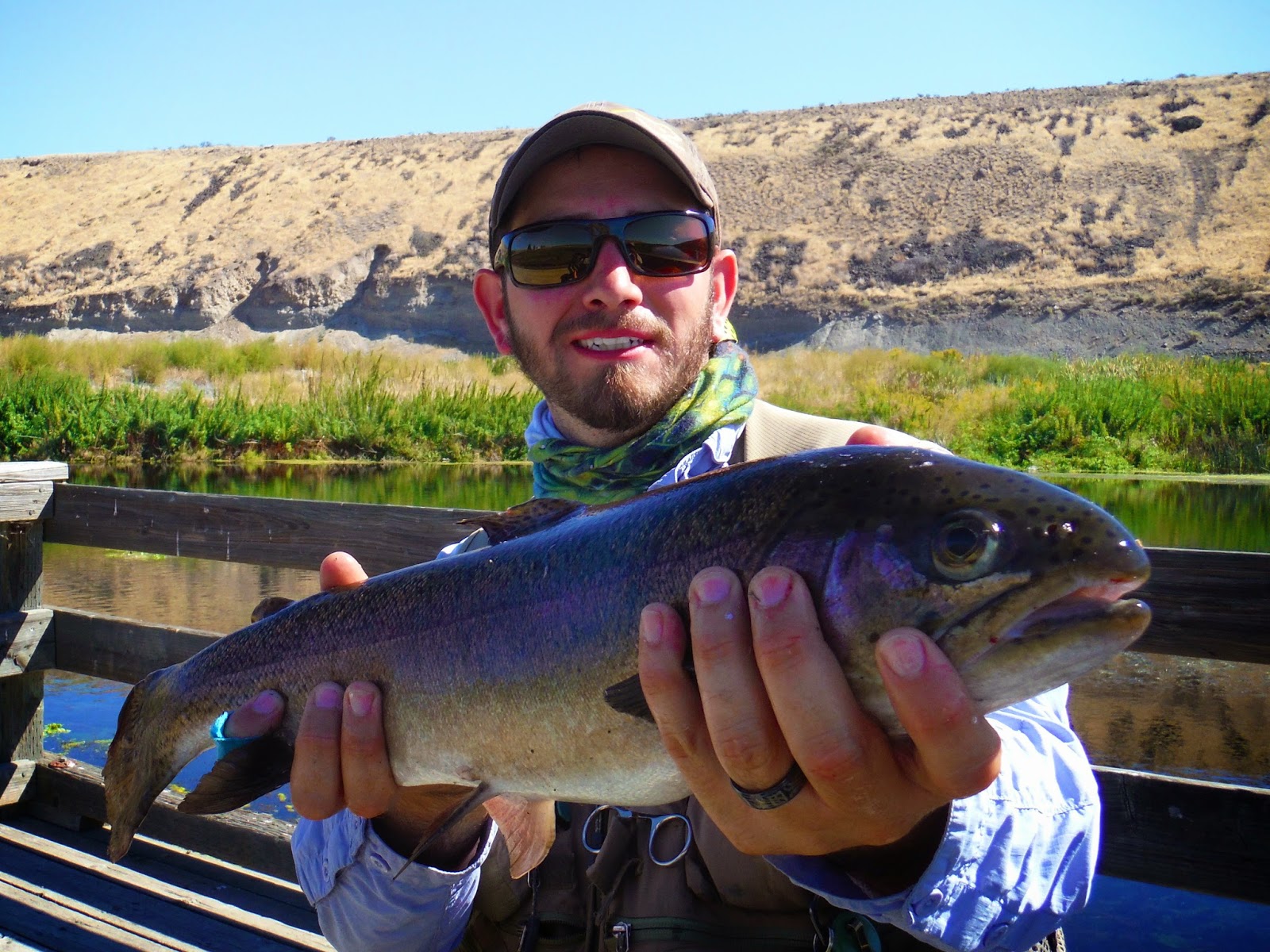 “What did it take?” Asked my dad, after the fish bolted off.
“A pico ant.” I said, with a smile.
“You got another one?” He asked, smiling back.
“Yep, something we cooked up in the fly shop.” I said, before I turned back to watch the rising fish.  I could see another rising fish, and judging by its mouth, it looked bigger than the fish I had just caught.
“Do you think you can get that one?” My dad asked.
“Let’s see.” I said.
This fish was further away than the last fish, so I peeled off line, and shot it out a little ways in front of the rising fish.  My dad and I watched as the small white wing of the pico ant coasted closer to where we had seen the fish.  A large disturbance near my ant suggested a refusal.
“It refused me…” I said, disappointed; but then, as if rethinking its decision, the fish turned back and slammed my fly! 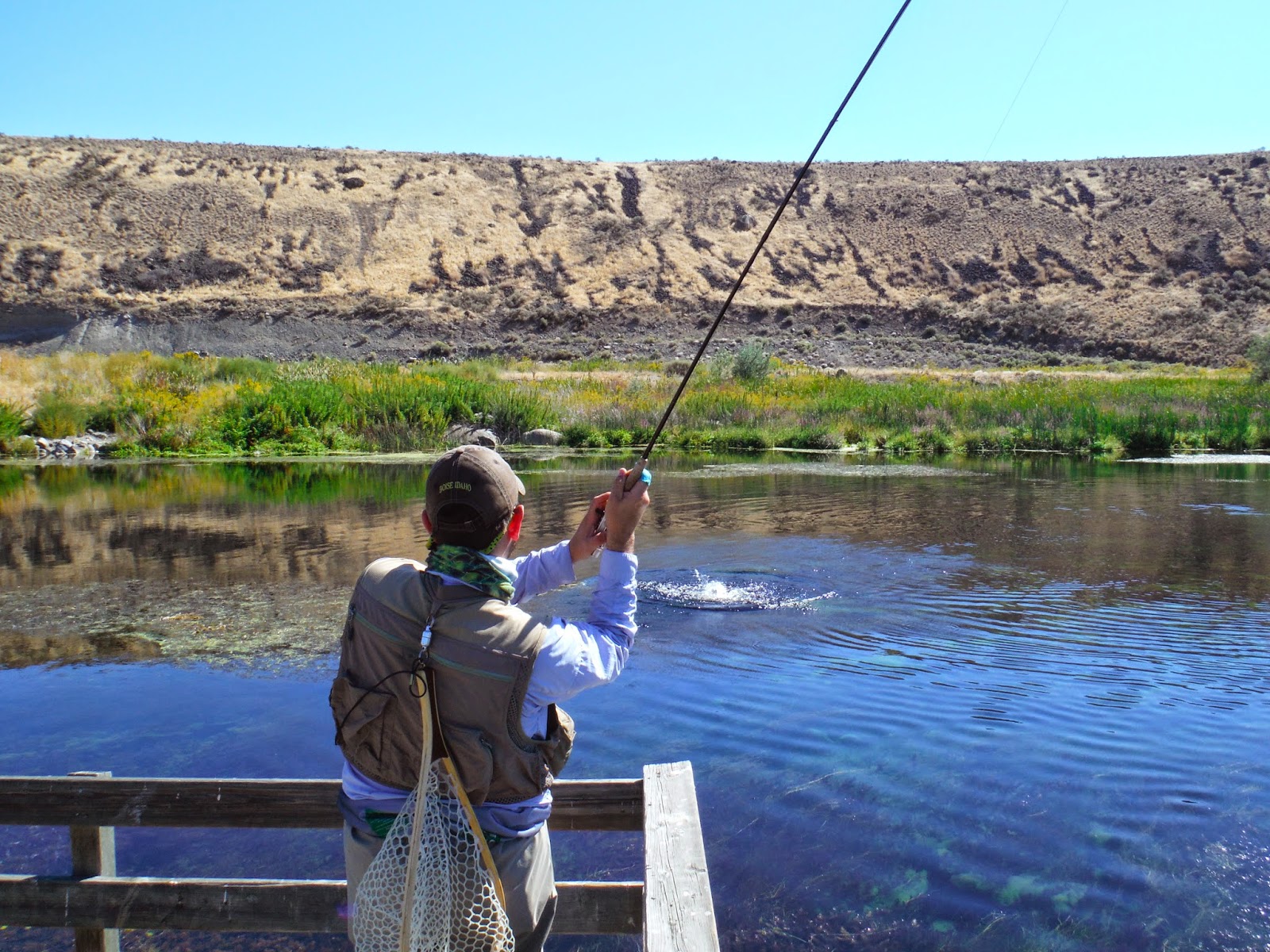 I handed my camera back to my dad and brought in a nice slab of a fish! 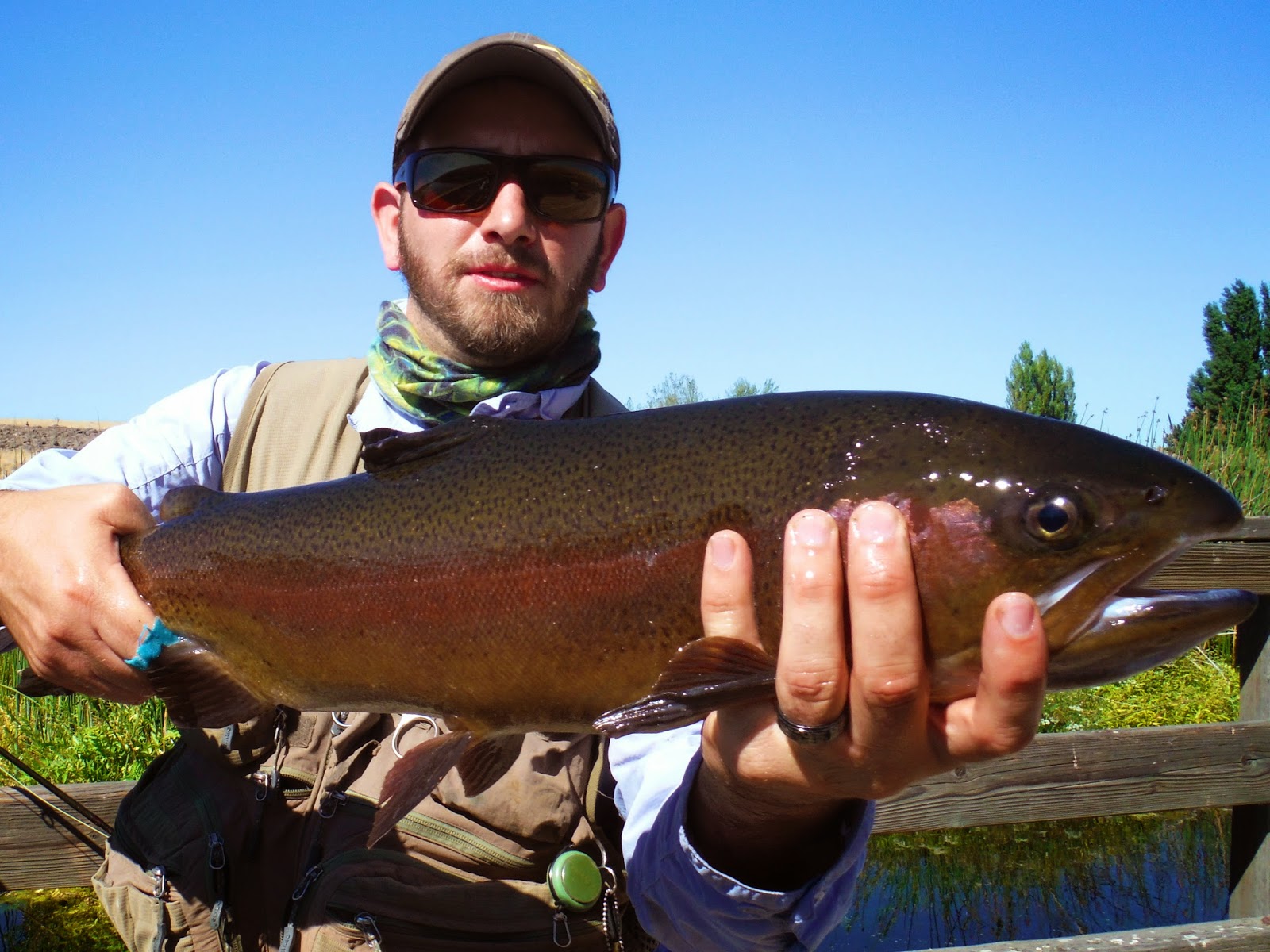 The Pico ant was working great!  I brought in another 20-inch fish, but for Rocky Ford Creek that’s no big deal, so no need for a picture… 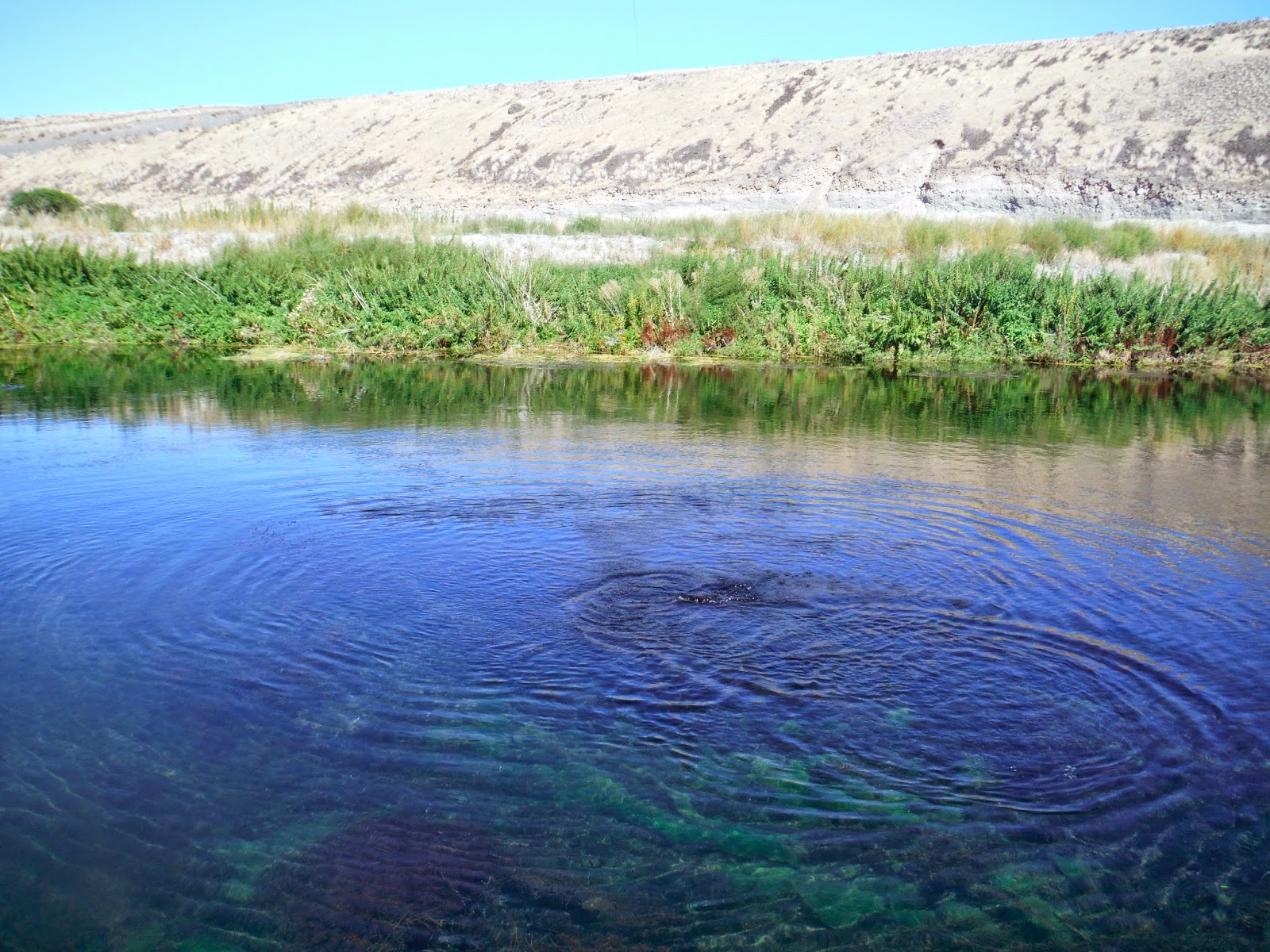 We decided to fish a different section of the creek, and as we walked back, I went see how my Spokane buddies were doing.  They had yet to get into a fish since the one I had hooked for them previously, and were still after the fish I had pointed out.
“Will that fish not take?” I asked, looking into the water.
“No, it won’t seem to eat the fly.” One said, as the other continued to look at the fish.
“May I give it a shot?” I asked, and he handed over his fly rod.  I explained, in detail, what I was doing as my nymph plopped into the water.  Just like before, the fish reacted to the nymph, and ate it!
“Here you go.” I said, handing the rod back with a fish attached. The fish leaped out of the water, and came unbuttoned quick.
“Man, you caught that quick!” The other friend said, as he watched  the fish swim away.
“It doesn’t always happen that way.” I said, before my dad and I took off to find another spot. 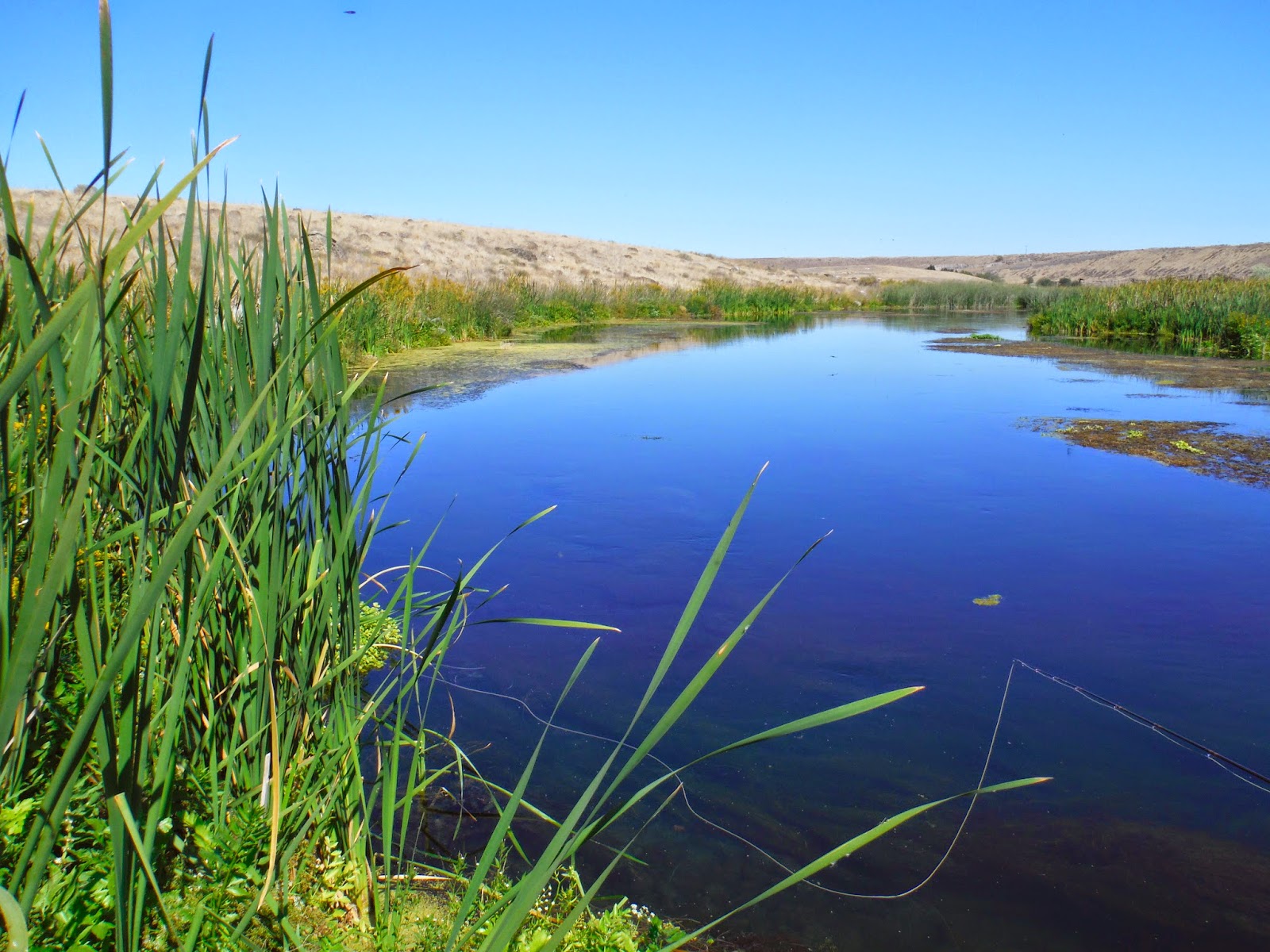 The aquatic vegetation was thick at our new spot, which made streamer fishing tough.  We found a fish near the bank, and after seeing how successful I had been teaching the Spokane boys how to sight nymph, my dad decided to throw on a nymph to try his luck.  Sure enough, after a few casts, he was hooked into his first fish of the day! 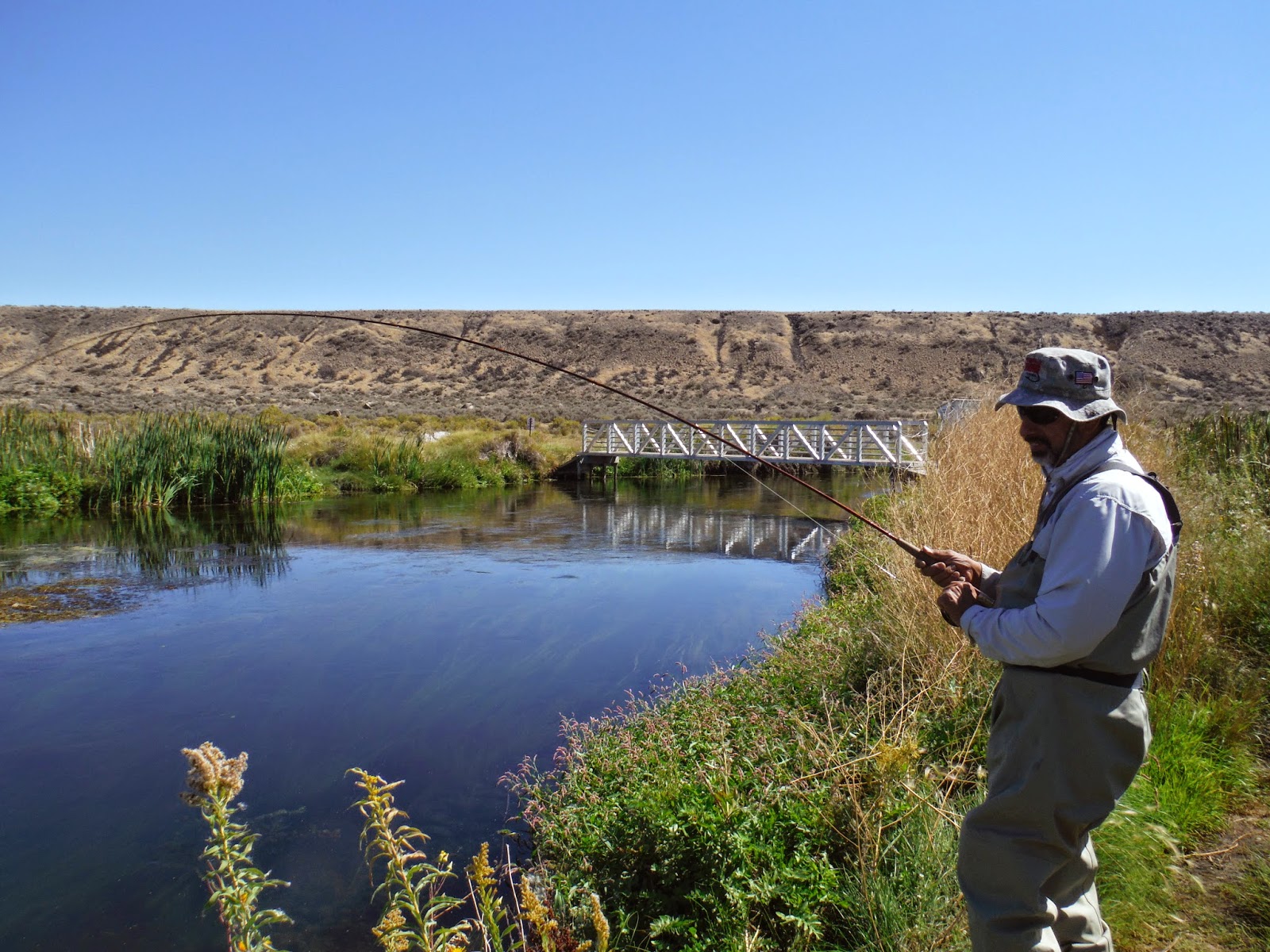 I didn’t offer up any advice as my dad fought the fish; I just watched and was ready with the net. 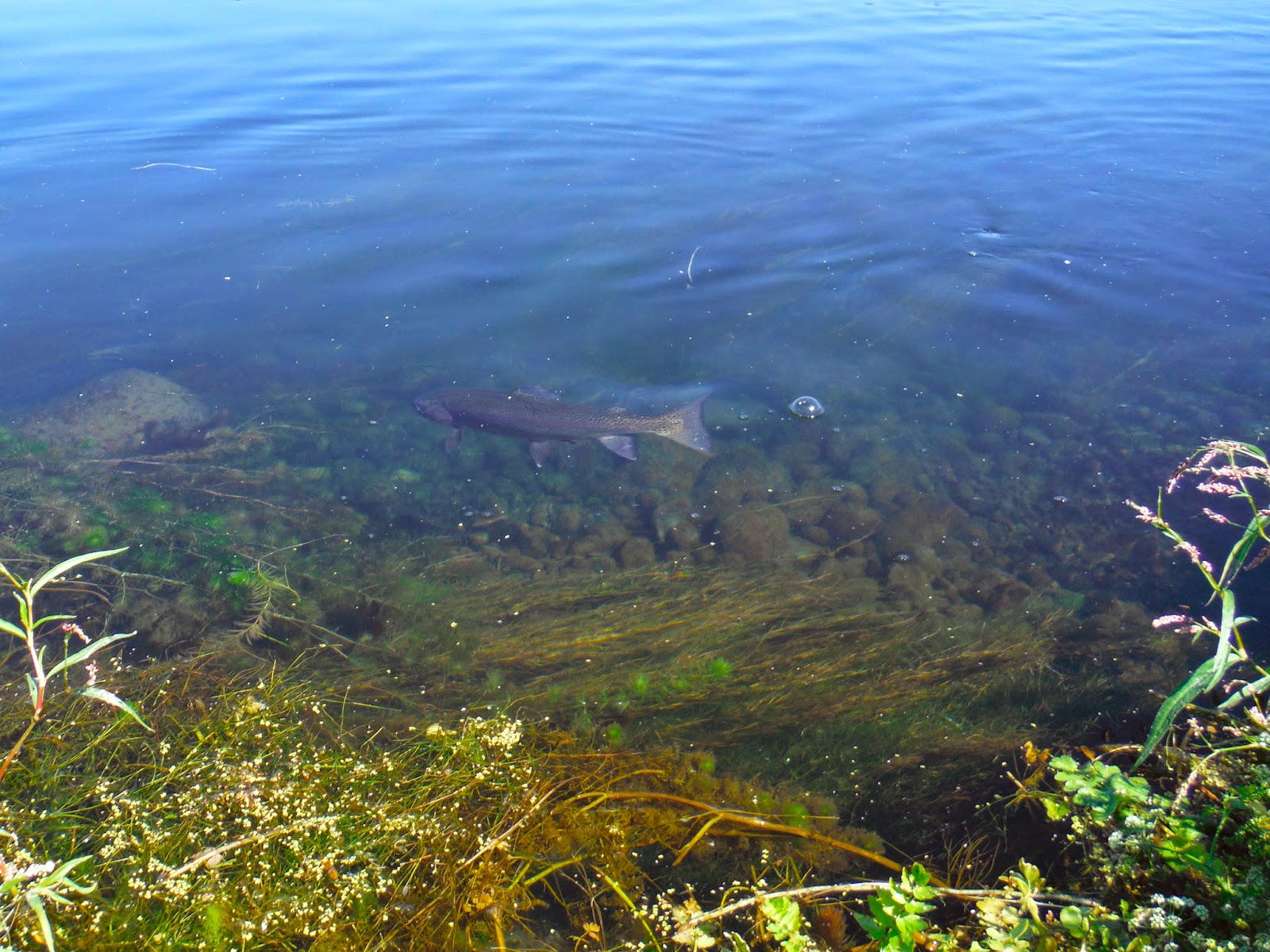 The fish made a run for it, and my dad kept his rod tip up.  The fight was lasting way too long, and the fish was moving further away.
“Okay, Dad, you better bring it in.” I suggested.
“I can’t; it keeps pulling.” He said, keeping his eyes on the fish.
“You are going to lose it if you don’t apply some pressure.” I added as the fish swam deeper into the vegetation, but it was already too late.  The fish had tangled the leader and tippet around the vegetation and shook free, leaving my dad fish-less. 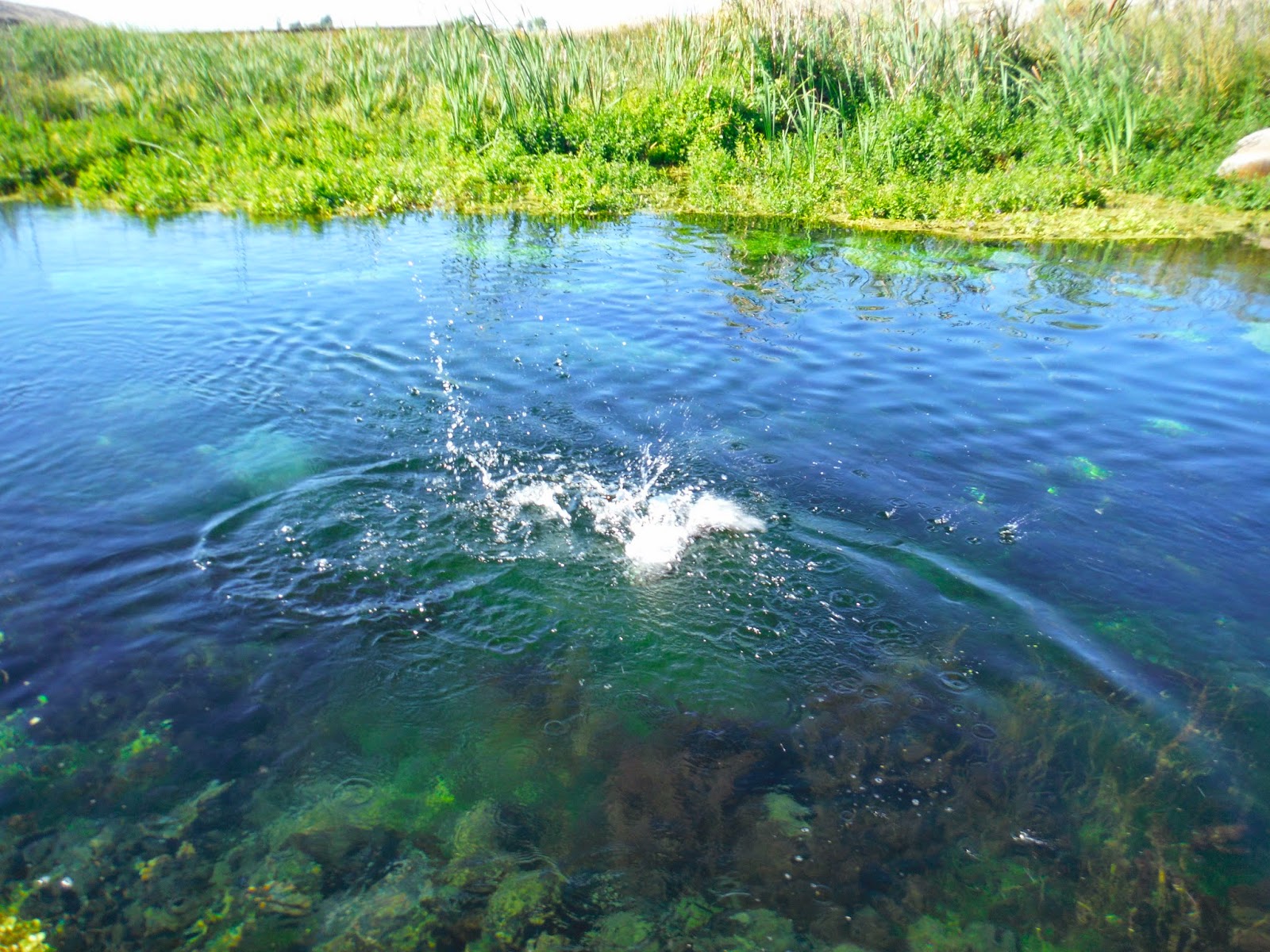 We moved to a new spot and I immediately found a fish willing to take a streamer.  Though the fish got away before I could bring it in, the hit and fight felt good.
“I got one!” I heard my dad yell.  I looked over and saw that he was indeed fighting a fish. 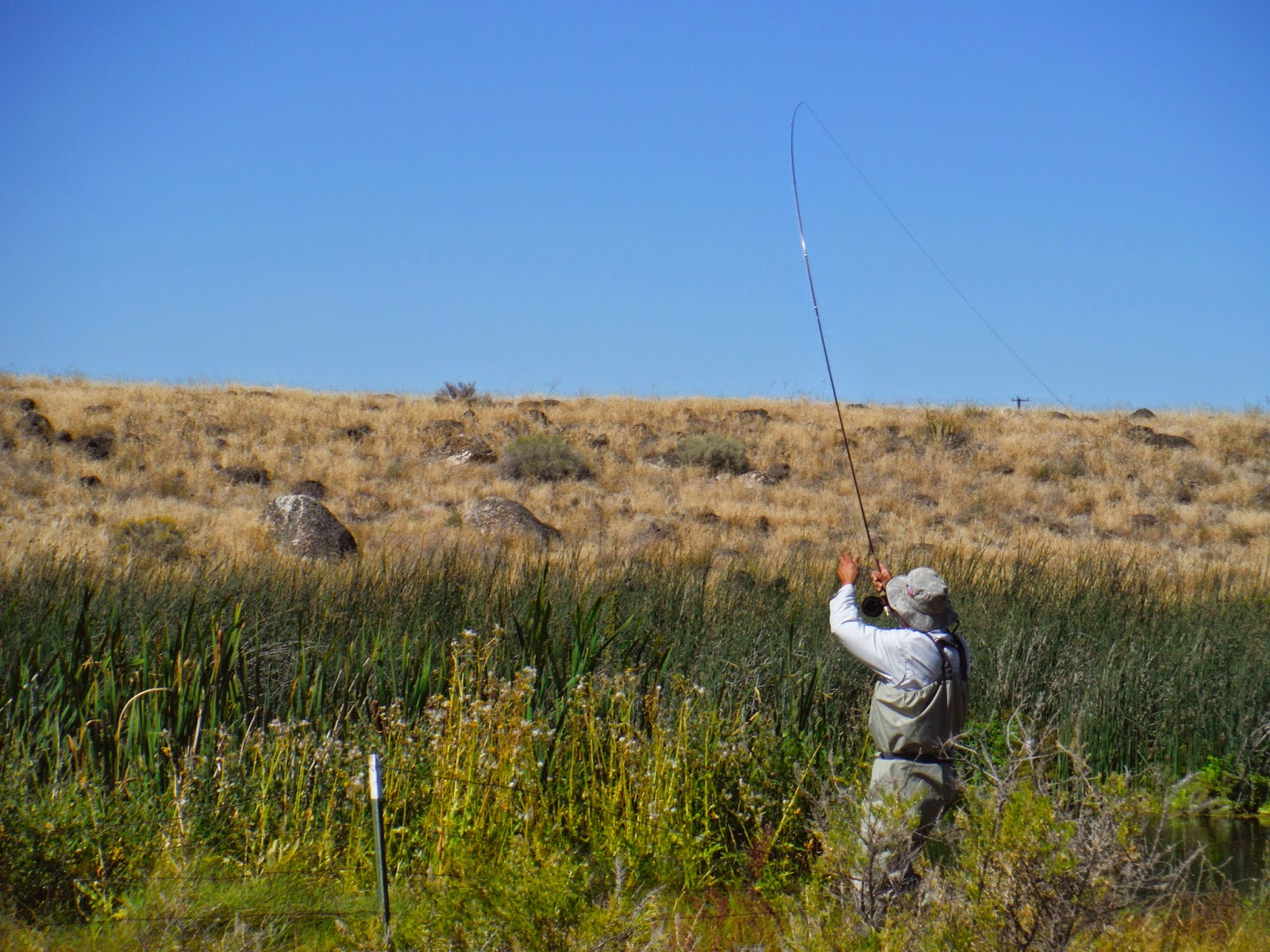 I reeled in quickly, ran to my dad’s side, and could see that his fish was putting up a good fight. 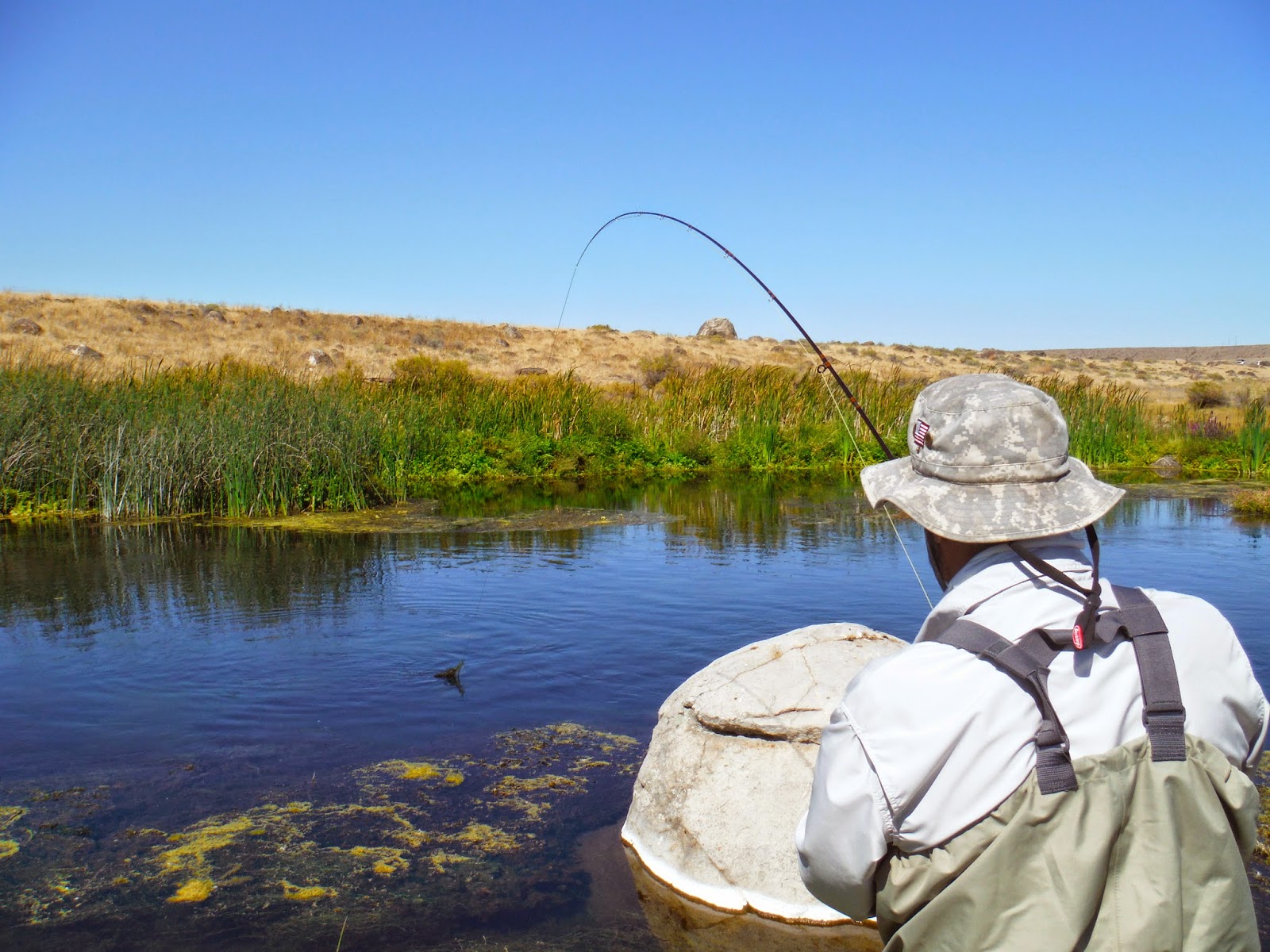 “You need to get its head up over that moss, and bring him in.” I said, but that wasn’t going to be easy.  The caught fish was tiring, and just as my dad brought the fish up to pull over the weeds, it exploded into another run.
“Holy cow!” My dad said under his breath as the fish tore away. That, thankfully, was the fish’s last run. With a big heave the fish was brought over the weeds and into my net.
“Oh my God!” My dad said, lowering his rod tip, finally able to relax his arms. He reached for his fish and brought it up for the camera, but the fish had different plans. It flipped in his hands, fumbling all about, as he tried to maintain control. The fish settled down, and after seeing how he had it held, my dad lifted his head and smiled for the camera. 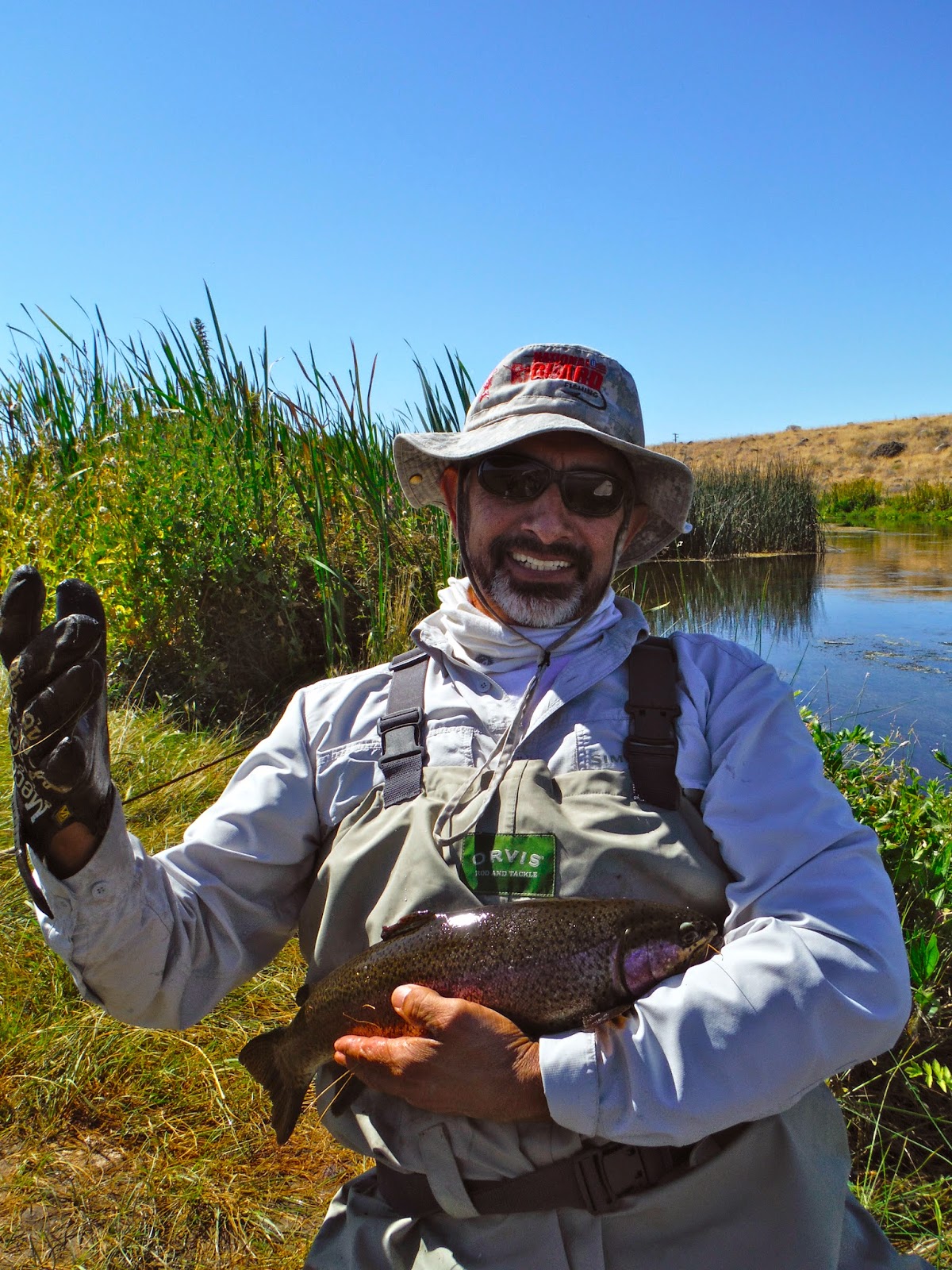 We quickly got the fish back into the water, and it kicked off with force.  I only had time to pull off my line and was about to cast when I heard my dad.
“I got another one!” He yelled, so I reeled up all my line and headed over to help. 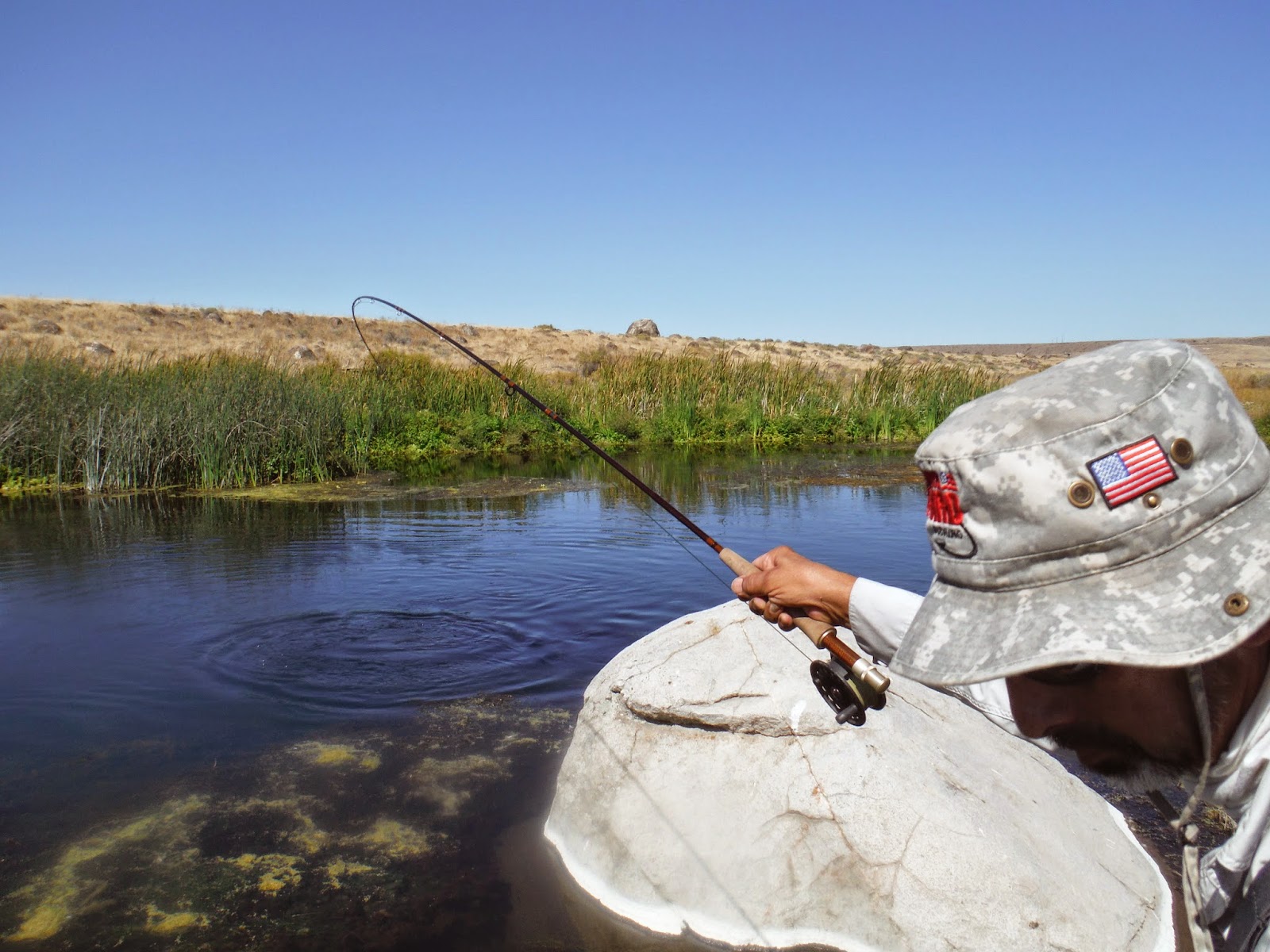 “My arms are getting tired.” My dad said, as the fish fought to stay away.  This was a much bigger fish than his last one, and it was taking twice as long to bring in.  My dad’s arms were fatiguing fast with every tug of the fish.
“Bring it in fast.” I suggested.
“I can’t!” He said back.
“Yes you can, the fish is tired; bring it in!” I said, watching the fish.
“You do it then!” He yelled, and handed over his rod.  I felt the weight of the fish, and it was definitely ready to come in.  I lifted its head out of the water, and with the rod doubled over, brought it in quick. My dad looked at me smugly, after I accomplished the maneuver in less that ten seconds.
“Did you think I wasn’t going to be able to do it?” I asked, as he picked up the fish for a picture. 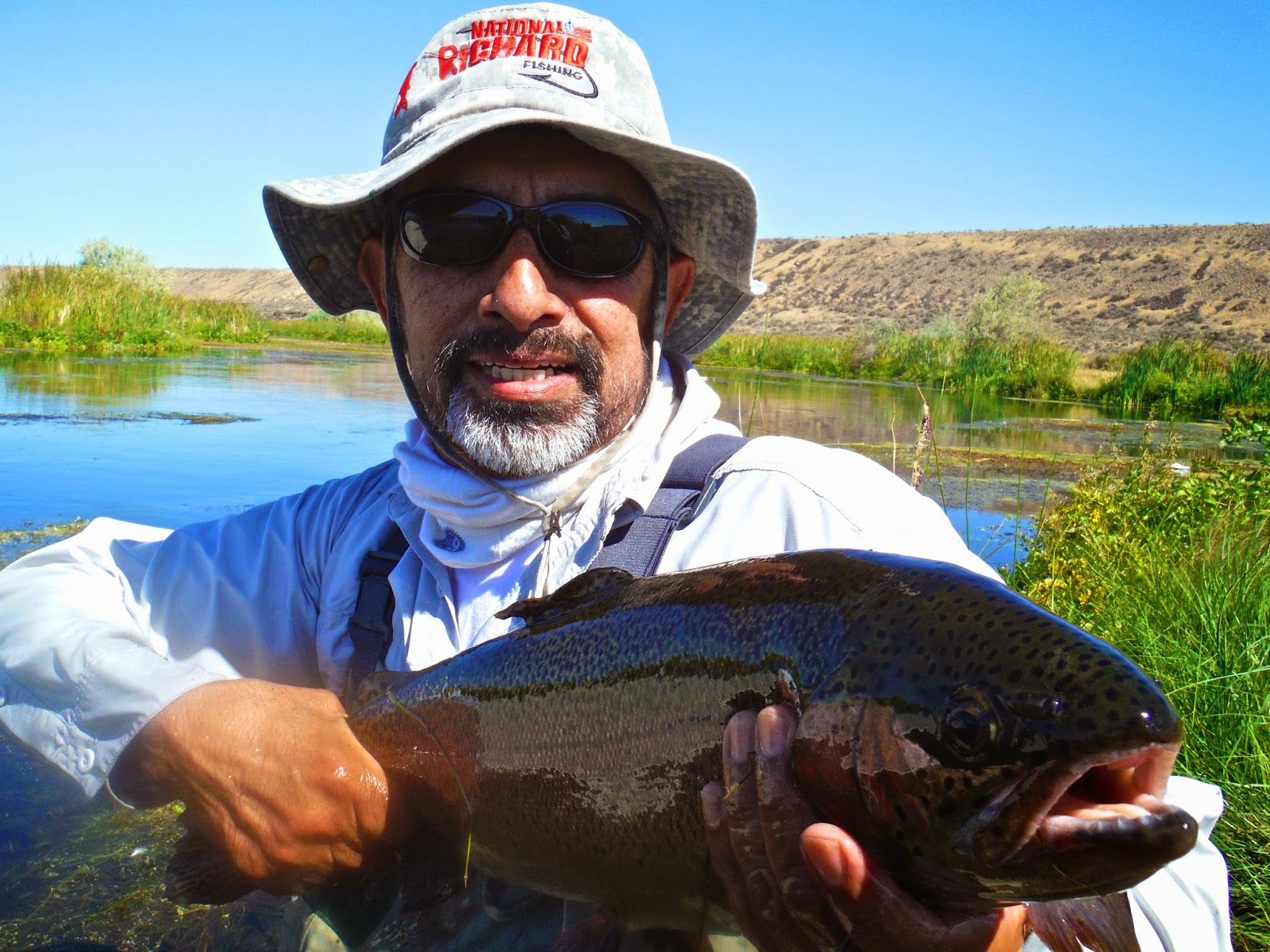 “Is this the big fish of the day?” My dad asked, holding his fish.
“The one I fought with the Pico ant was bigger.” I said, leaving my dad frowning. I went to snap another picture and the fish flopped right as I took the shot! I quickly picked the fish up and held it in the water.  At Rocky Ford Creek if you let the fish go too soon, it will turn belly up.  Though it will start to swim away, you need to hold the fish until it kicks hard.  I held my dad’s fish in the water, and the sheer force of the kick this fish gave startled me; there was no holding on after that. ﻿

We finished the day off by each catching another fish.  My dad had become quite the fly fisherman: today he proved that by hooking into five fish with very little help.  It was only a year ago when catching a fish for him was merely just a thought, and now I am almost certain he will get into one.  Though we had plenty of daylight left, we had to get going… There was a wedding to attend after all.

1 thought on “Back Home for a Wedding”