Skip to content
The term gulper fishing came from the infamous Hebgen Lake, and my dream of fishing it was finally here.  Even though the forecast threatened rain and electric storms by 1:00 p.m., Terry Kowillas and I were up early to start the day off right. 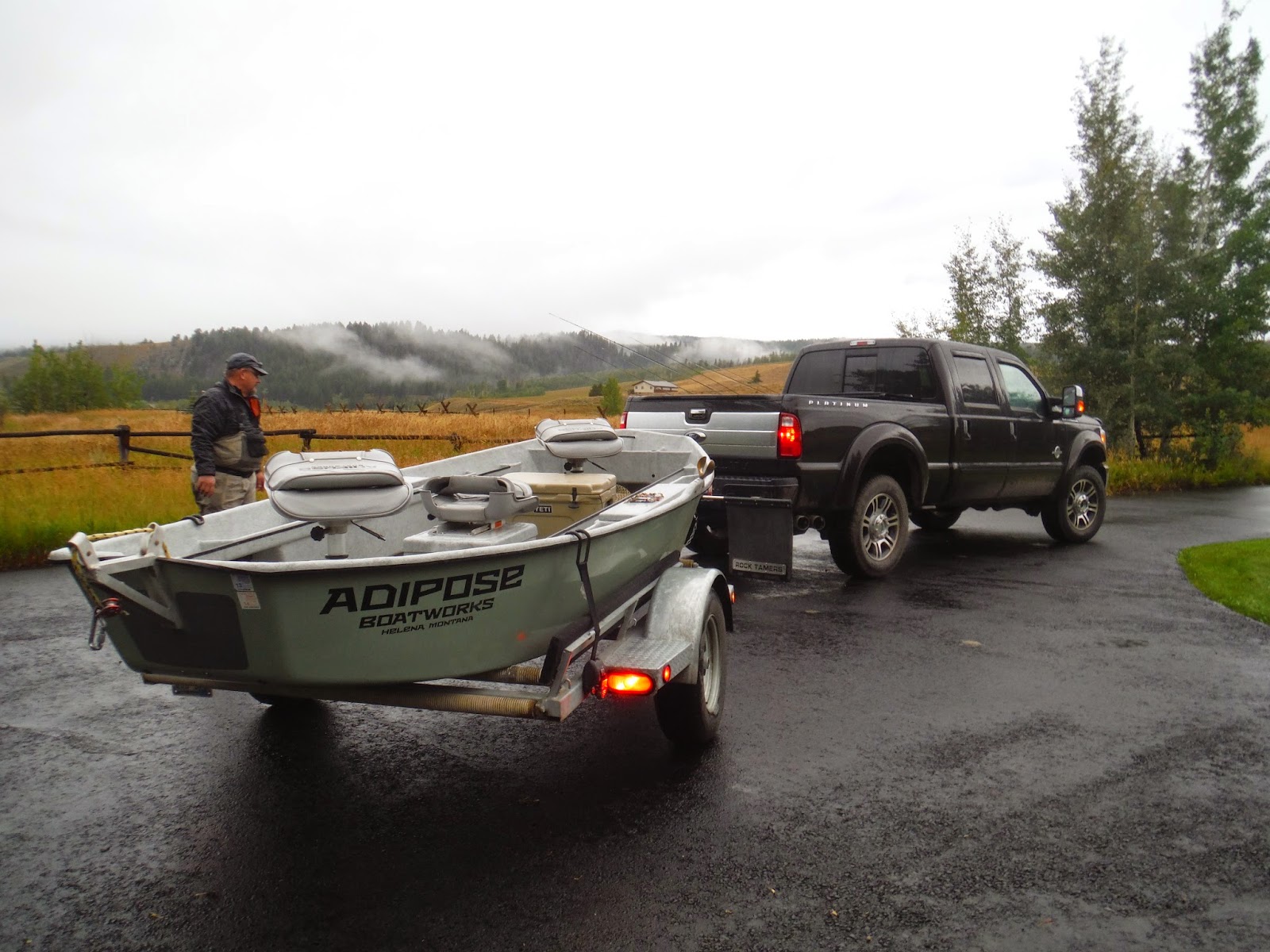 I had been texting Phil Rowley like a teenager to gather up as much information about the lake as possible. Phil didn’t disappoint, providing me with Arcanum knowledge only a local would know. 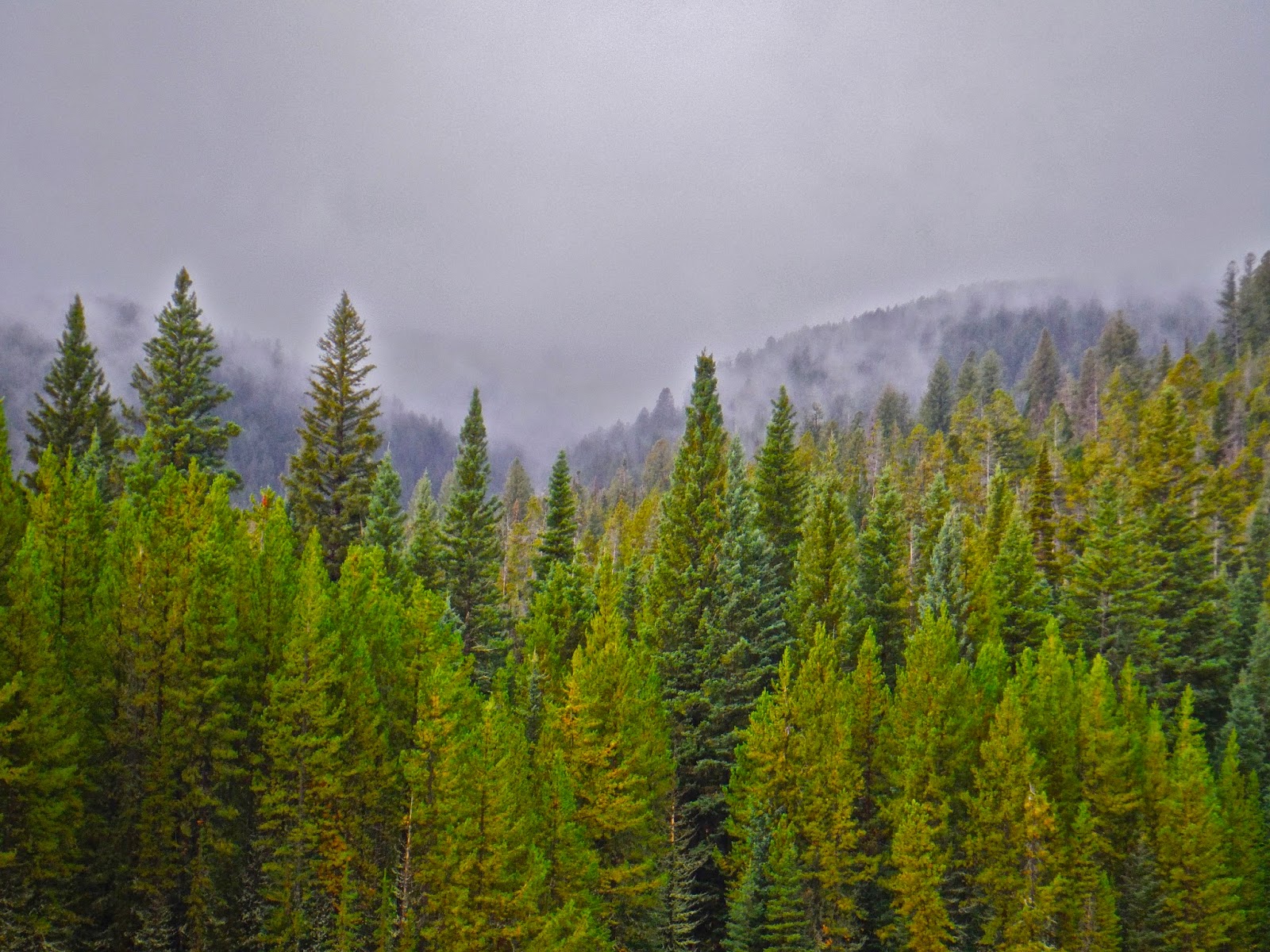 Terry oared to where we could see a few rising fish off in the distance, and the closer we got, the less they rose. We found this to be typical as we engaged the gulping fish.  Out of the corner of my eye I made out a disturbance on the surface of the water.
“There, Terry!” I pointed, and with one good stroke of the oars I was within casting distance.  I blasted a cast out to where I had seen the disturbance… and nothing.  My fly sat motionless on the surface of the glassy water for longer than I would like to admit. Perhaps the fish will turn back around and eat my fly, I thought, but it wasn’t happening. 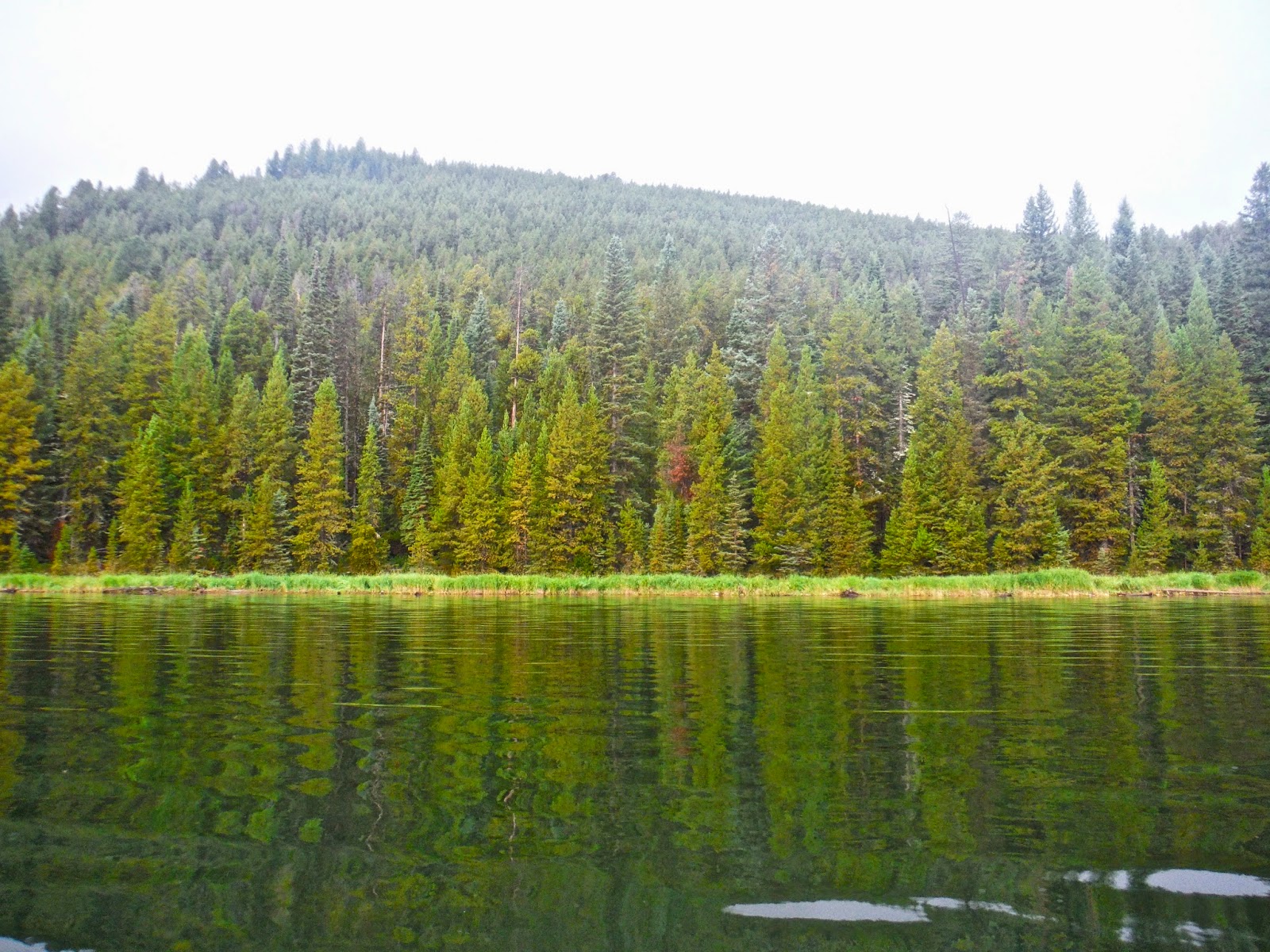 Terry sat back behind the oars to move the boat to a different location, and I started reeling in my fly.  The small wake from my CDC caddis was barely noticeable, but it was exactly what a cruising fish was looking for.  WHAM!
“Whoa!” I yelled, setting the hook.
“Did that fish take your fly while you were reeling it in?” Terry asked.
“Yeah!” I said happily, and went to hand Terry my camera.  Terry did not take the camera from me, but instead scrambled like a madman for the net.
“Did you see the fish that took your fly?” Terry asked, as he readied the net.
“No.  It doesn’t feel that big.” I said.  I stood up to get a better view of the fish, but it was not needed.
“It’s bigger than anything you caught on Quake Lake!” Terry said excitedly.  Just then the fish sprang out of the water, and I saw the full girth of it.
“Whoa, crap!” I yelled.
“Yeah!” Terry confirmed. The fish was seriously fighting now, pulling and tugging with all of its weight.  With quick maneuvers by Terry, and my ability to get the fish’s head up, Terry netted it quickly and got a stunning shot of me and my brown trout. 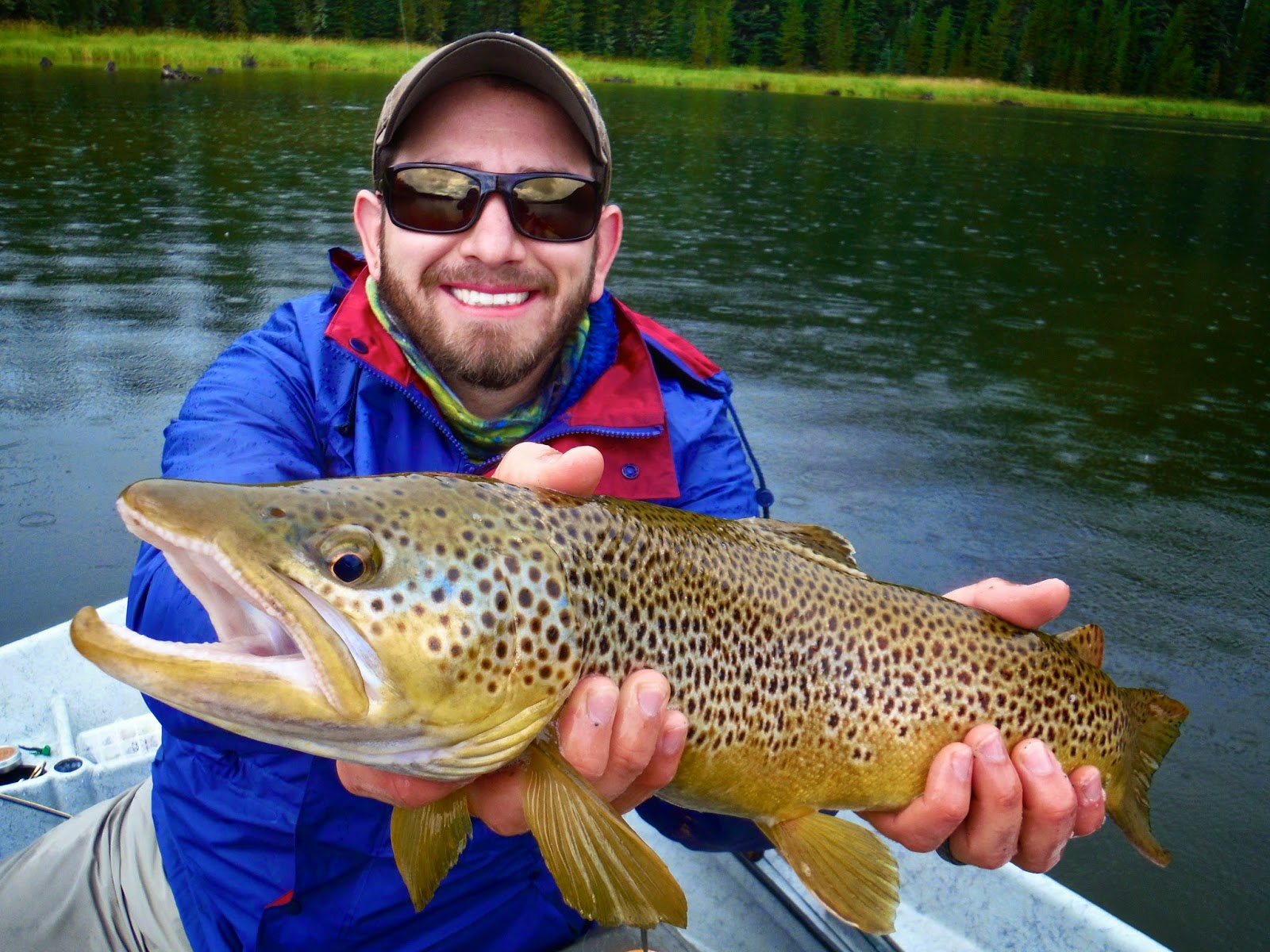 I quickly got it back in the water and held it for just a second before it kicked off. 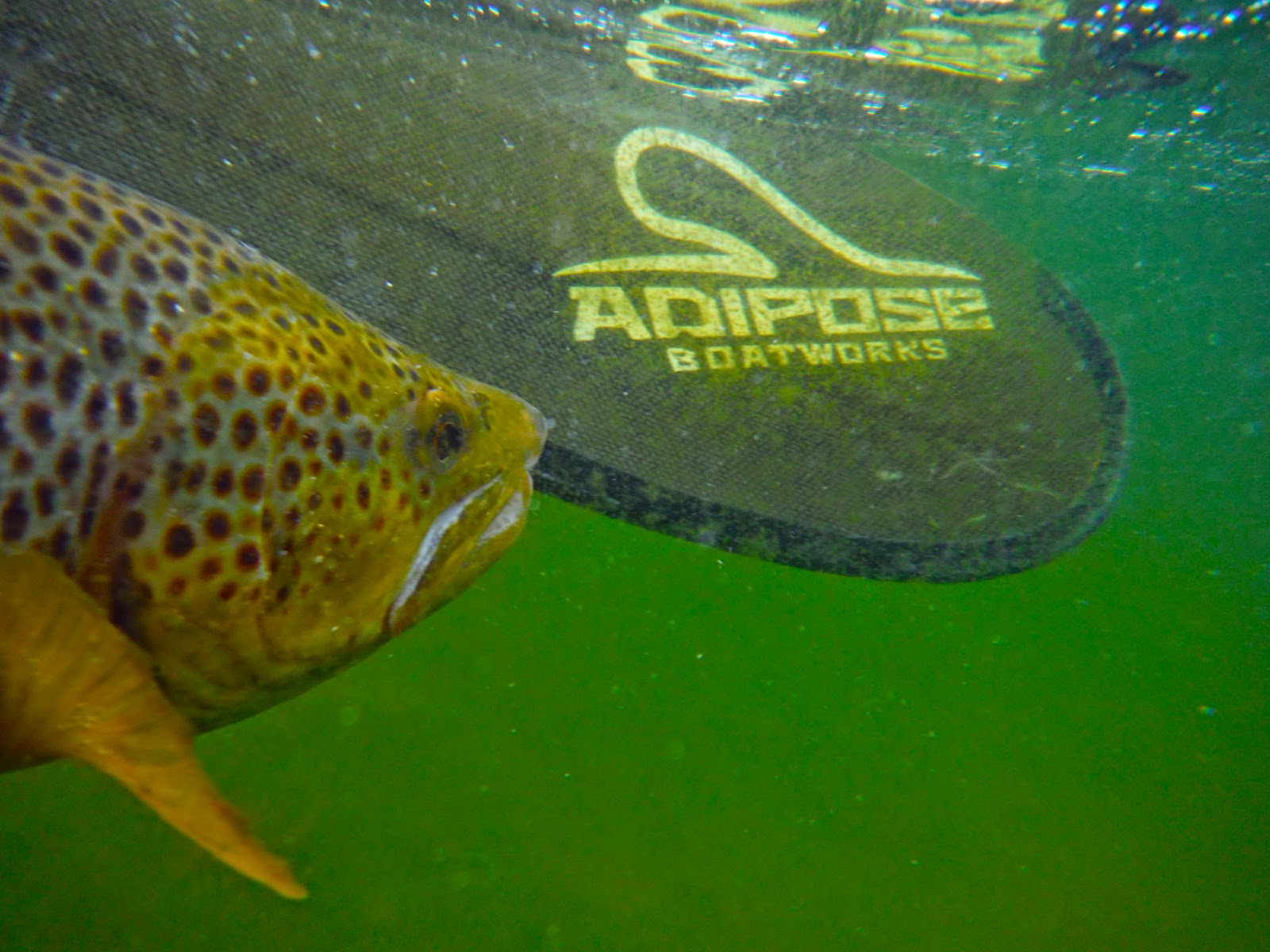 “Got one!” Terry said.
“Seriously?” I asked, still flicking the water off of my hands after releasing my fish. “What did it take?”
“A caddis.” Terry said, “I just started twitching it and caught a fish!  Kind of how you caught your fish.” 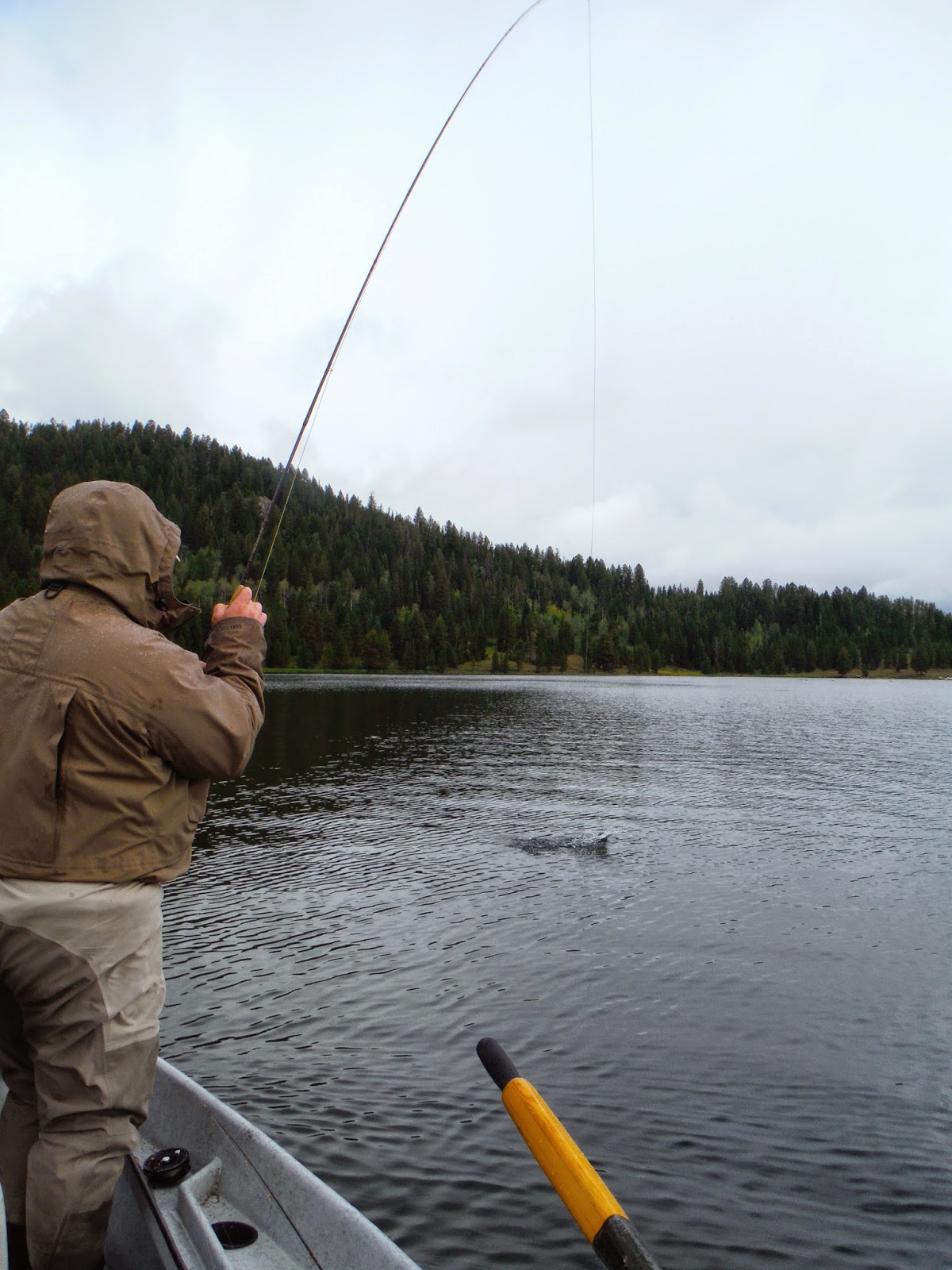 Terry’s fish was putting up a great fight.  His Hardy reel was screaming as the fish made run after run. With a good heave, Terry brought the fish in and I scooped it up with the net.  He got a handle on his fish and held it up for one of Terry’s photogenic fish pictures. 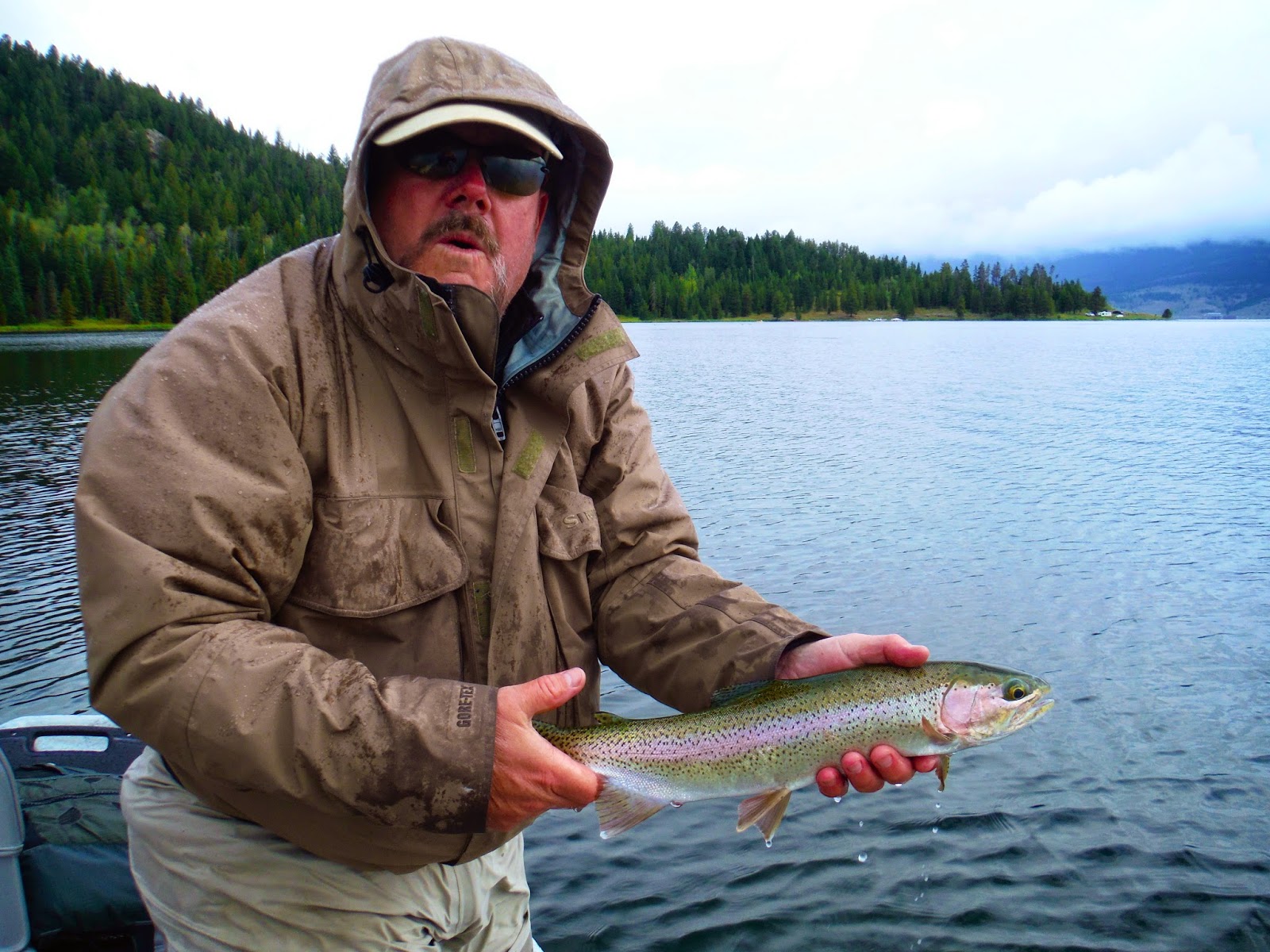 “You could smile.” I said, as Terry released his fish, and his response was, “Naaaaaaaa.”
To our surprise the weather was holding up better than expected, with only slight drizzles here and there. As soon as there was a little cloud cover and calm water, it was easy to make out gulping fish.
“There’s one.” I said to myself, as Terry started to take a nap.  I stood alone on the boat, and watched as a fish gulped and was swimming over to its next meal, which happened to be my fly.  Its little mouth was open and inched from my fly.  I hope it doesn’t refuse my caddis, I thought, but less than a second later, my fly had been taken.  I quickly set the hook, and the fish bolted!  I didn’t realize that I was standing on my fly line as the fish ran, and SNAP… the fish was gone. 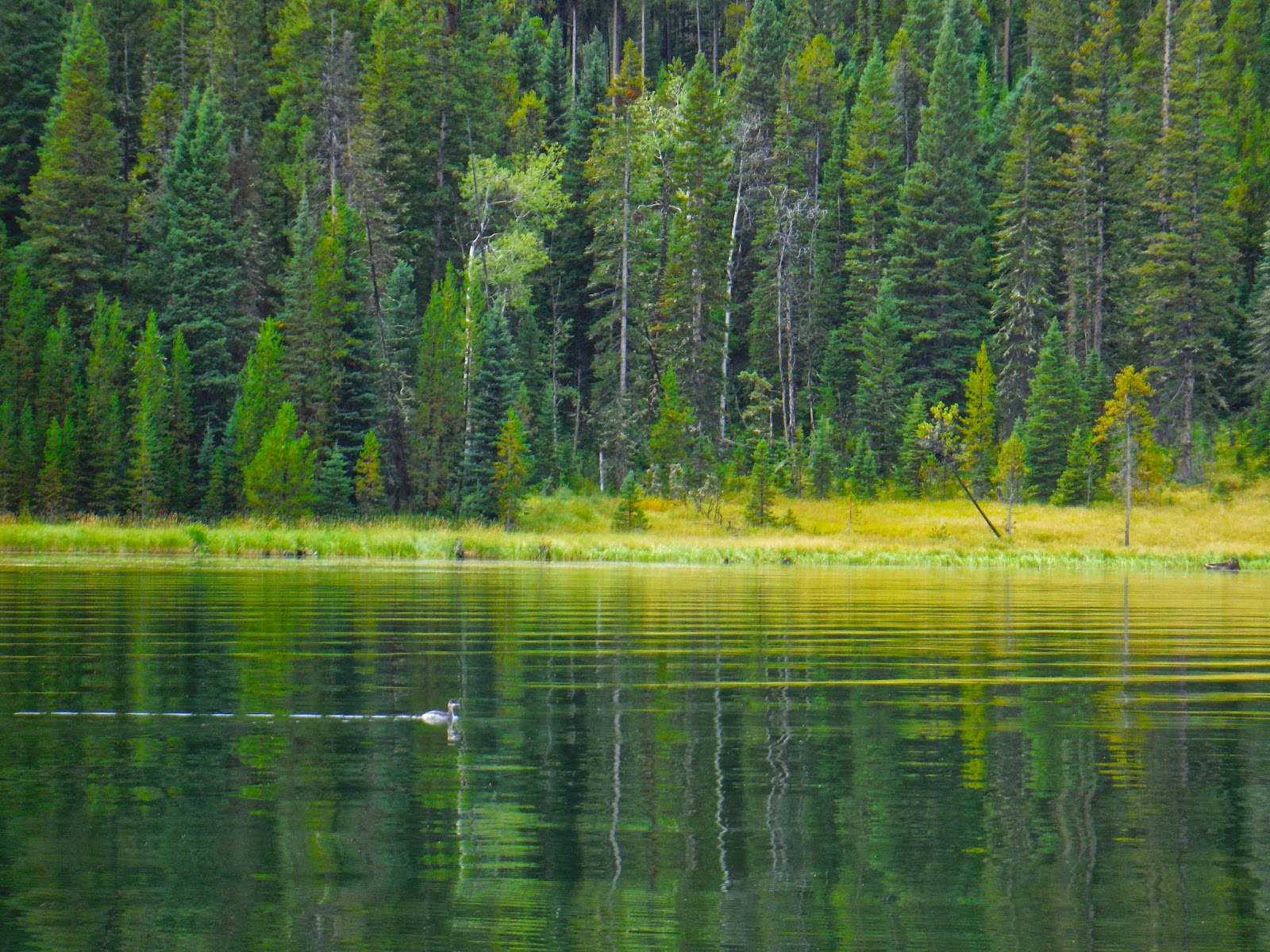 “Crap!” I yelled, recognizing my malfunction.  I quickly tied on another CDC caddis, and was back to searching for a gulping fish. Another fish presented itself, and after it took a natural, I noticed the direction it was swimming and launched a fly in its path.  My fly sat untouched, and I thought I hadn’t placed my fly down fast enough.  The fish had changed its approach; it came shooting up from under the fly and exploded on it!  The sudden eruption from the fish startled me, but not enough to forget what I was doing.  I set the hook and brought in the rambunctious fish. 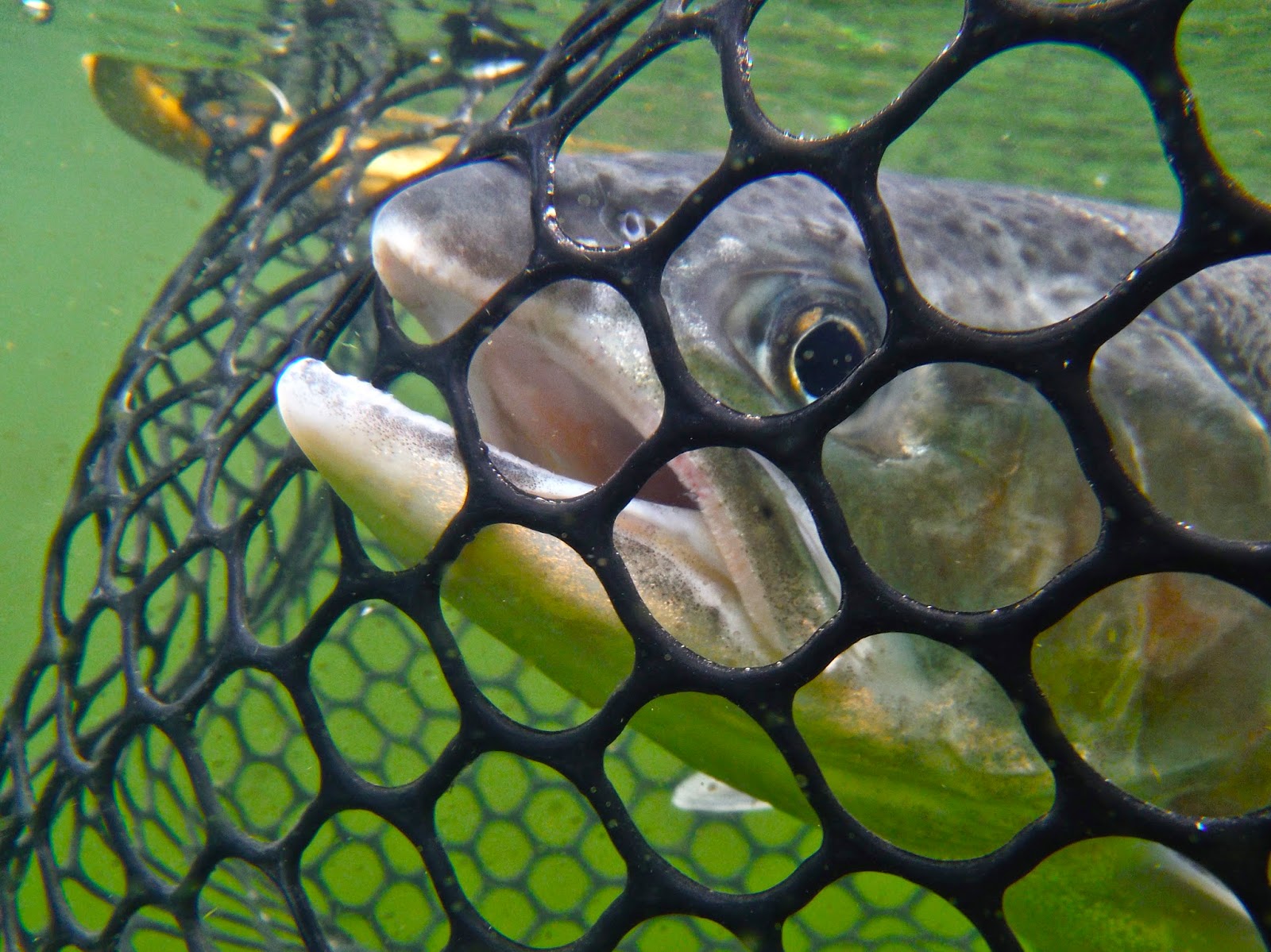 I watched as my fish swam out of the net, then looked up to see Terry, ready to fish. I oared over to him, and he jumped in the front seat.
“How was the nap?” I asked.
“Great! I feel much better now”. He said, as he readied his rod.
I stayed behind the sticks and crept closer to some gulping fish.  Terry was completely in control as he made a nice cast to a gulper.
“Got ’em!” Terry yelled, lifting his rod tip. His fish was jumping like Van Halen, and Terry applied the torque to bring it in.  He held it up for the camera and before I took a picture I said, “Smile!” 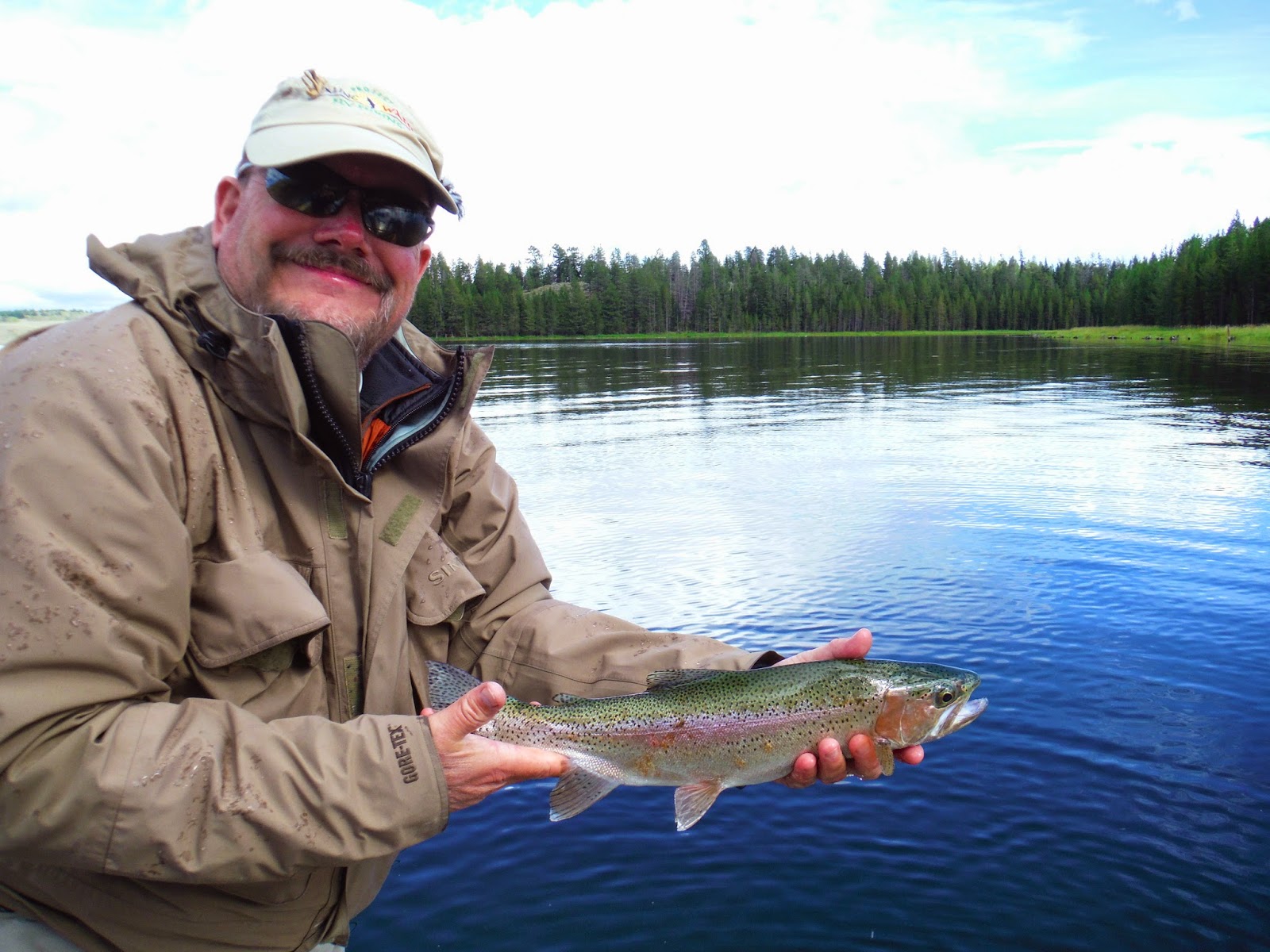 Right as I clicked to take a another picture, Terry’s fish flopped in his hands.  Terry lost control of the slick fish, but before it could slip out of his hand too far, Terry swooped it towards the water in mid air.  The fish flung out into the lake like a helicopter and splashed into the water.
“Well…” Terry said, watching his fish swim away, “… Beats falling in the boat.”
I looked into the picture archives of my camera, to check out what kind of picture I took of his fish flop.
“Oh, Terry… You need to see this picture!”  I said, holding out the camera. 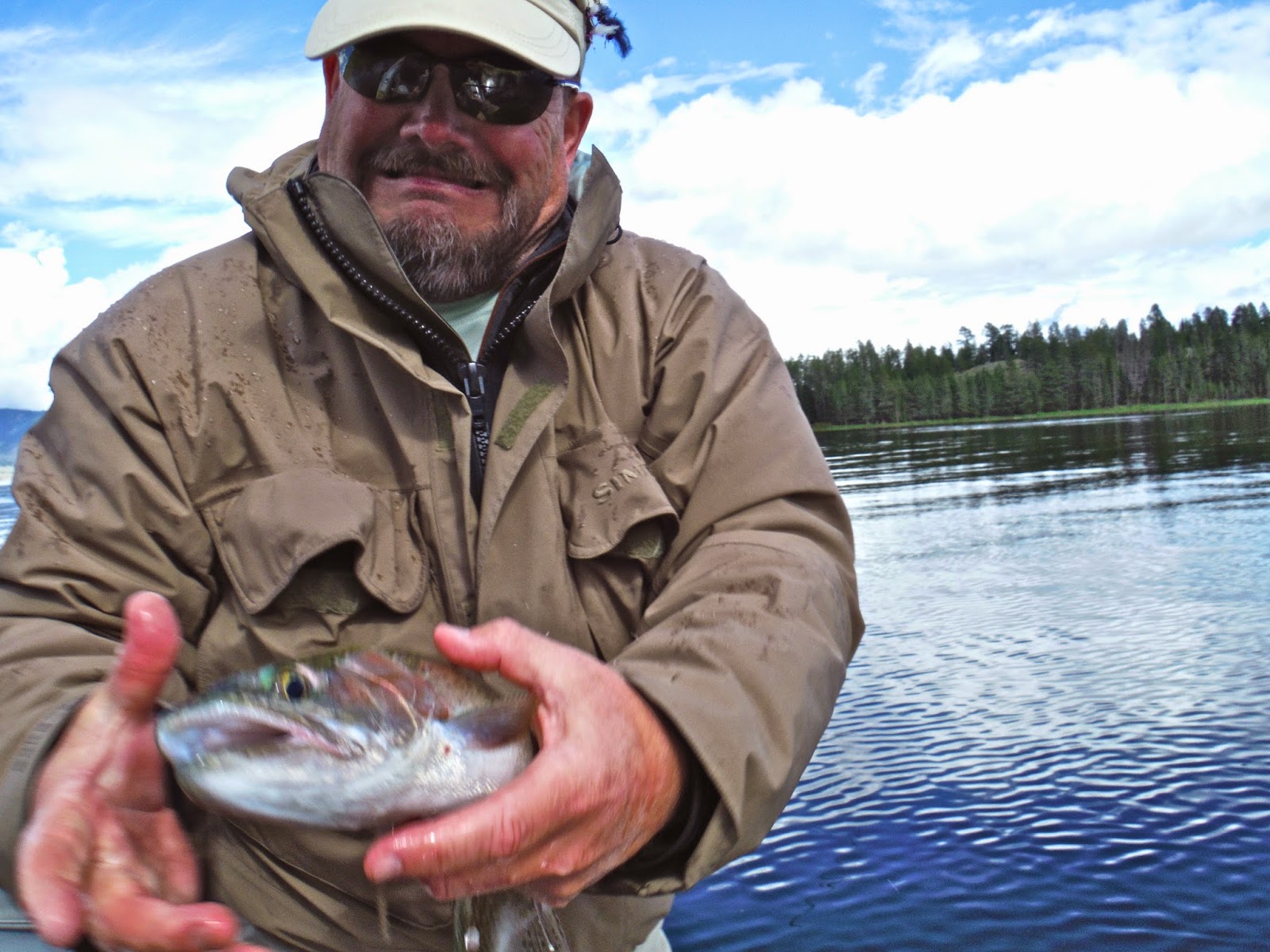 The rain had started back up again, only this time it wasn’t letting up.  I wasn’t worried about the rain today, because Lois was kind enough to lend me one of the rain jackets she had at her cabin.  The sprinkles were turning into bigger drops, but not yet big enough to disturb the water too much.  I caught a glimpse of a rising fish, and flicked out my fly.  Like clock work, the fish took and I was all smiles. 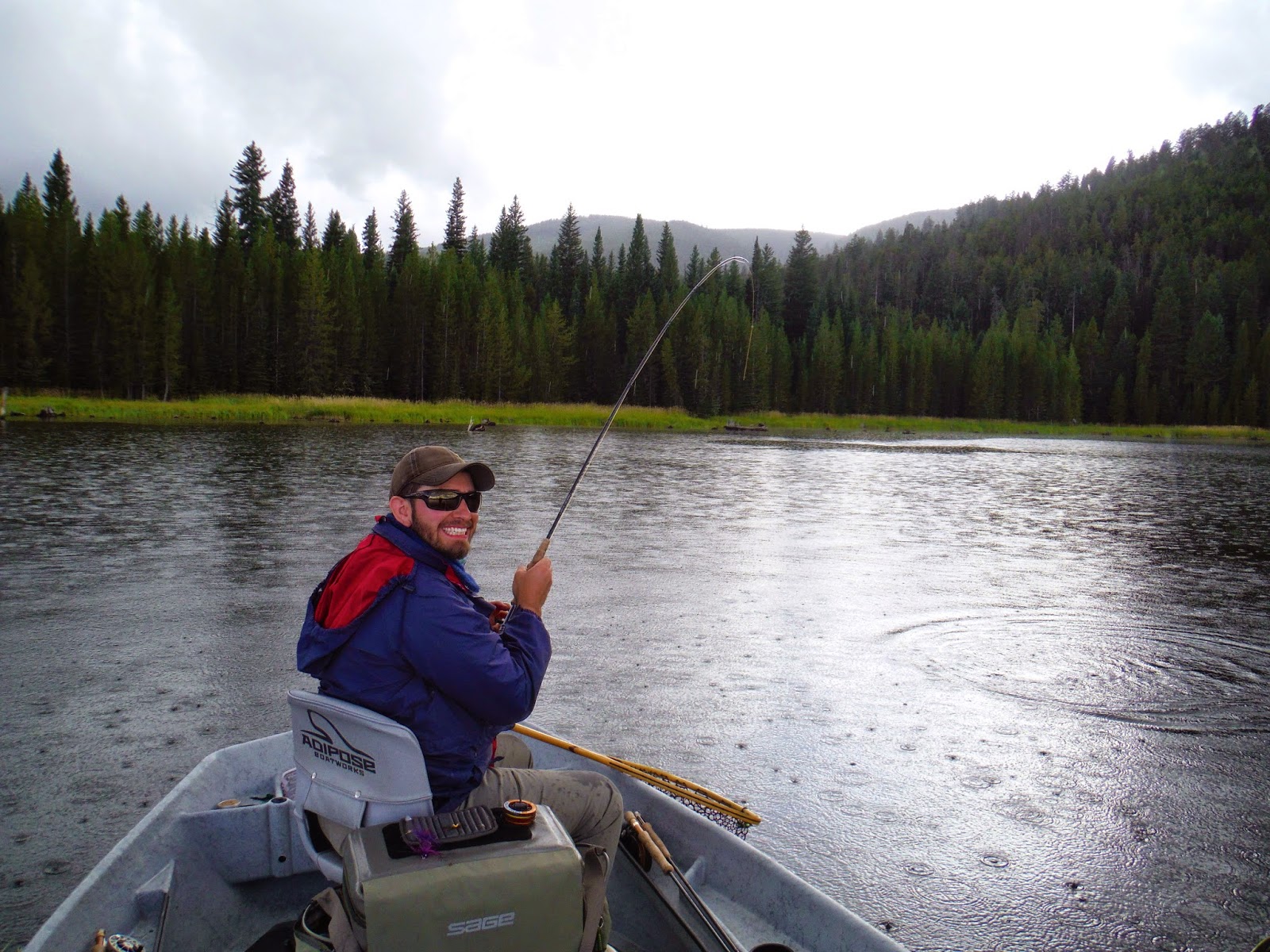 The fish put up a good fight, and Terry was kind enough to snap a picture before I let it go. 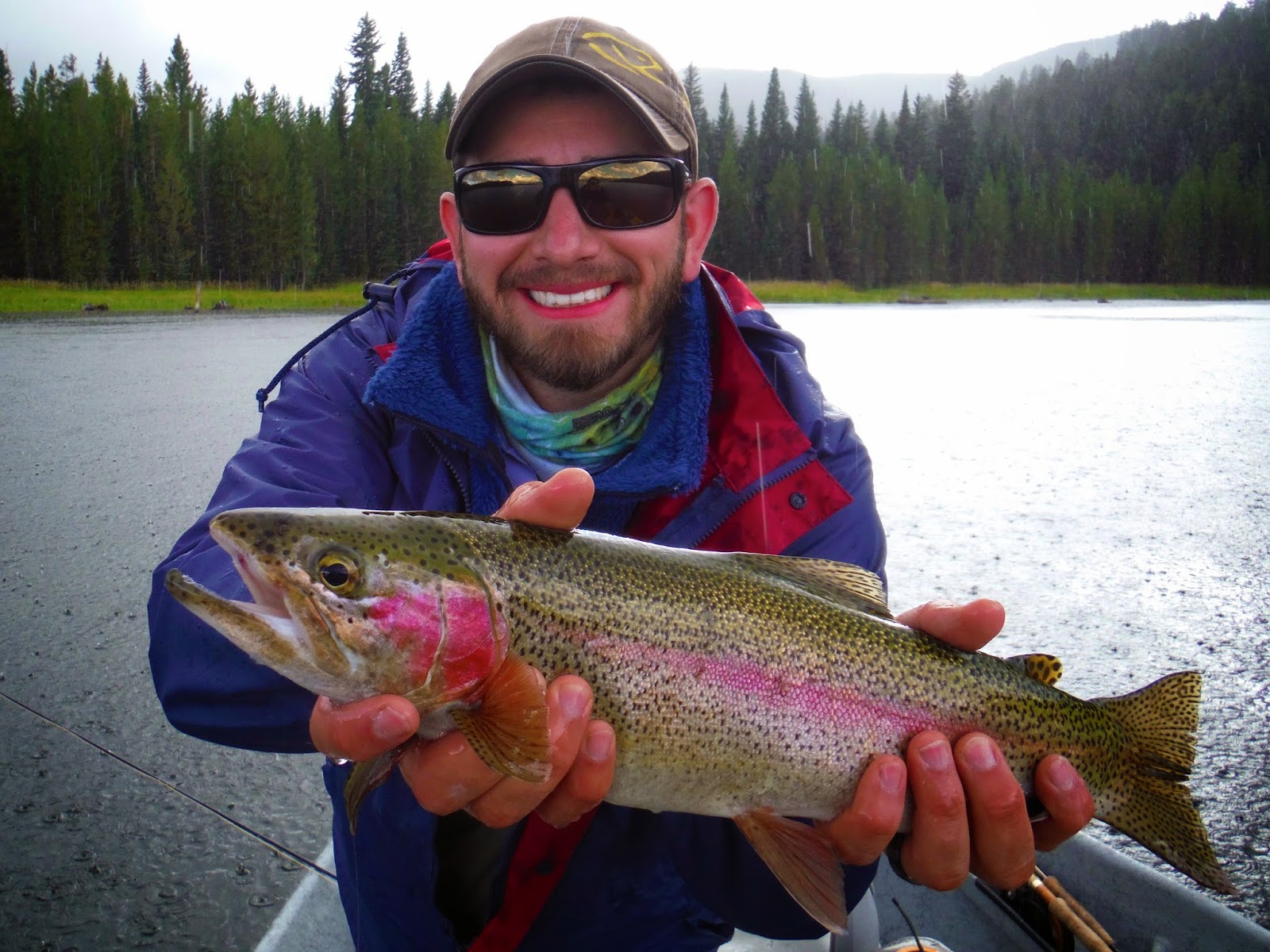 The rain settled back down, but the cloud cover was still looming overhead.  Gulpers were everywhere, and we were doing our best to get our flies in the fishes’ path.  I got into another fish, and brought it in quickly.  Terry was busy casting to gulping fish, so I took a quick picture of the fish in the net. 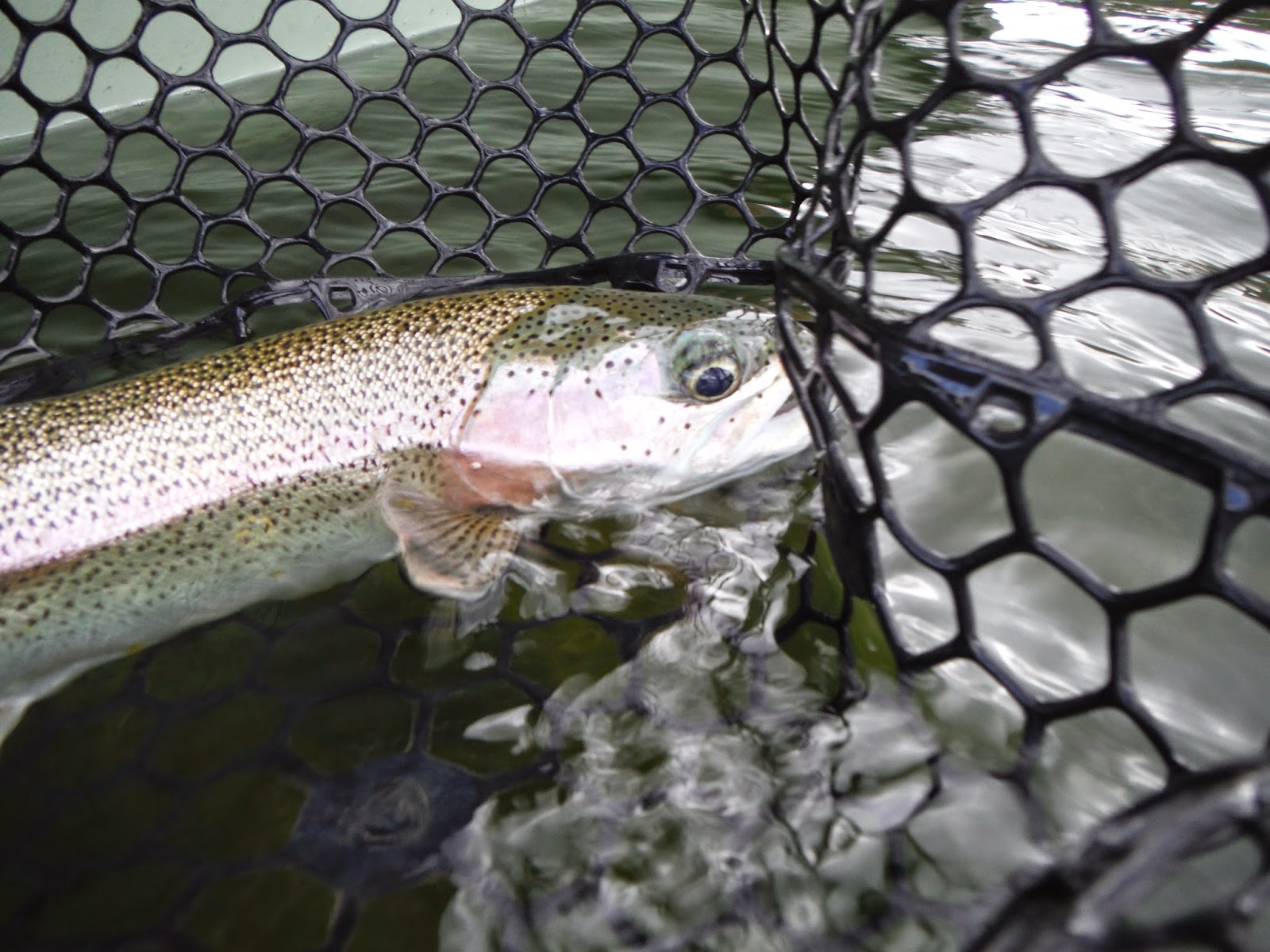 The gulping activity was starting to slow down.
“There are some over there.” Terry said, pointing to a small pocket of water. I oared us over, and Terry made the first cast. It was not surprising that when we got there, the fish stopped rising.  Looking out from the back of the boat I saw a rise, so I quickly casted out. Less than a second later, a line came from over my head and a fly also landed near where my fly was.
“Are you poaching water?” I asked.
“I’m getting desperate!” Terry said, smiling.
“And, we’re friends.” He finished saying, while our flies laid a foot or so apart.  It wasn’t long after that when the fish decided to take my fly, and I didn’t have the heart to ask Terry to stop and take another picture. 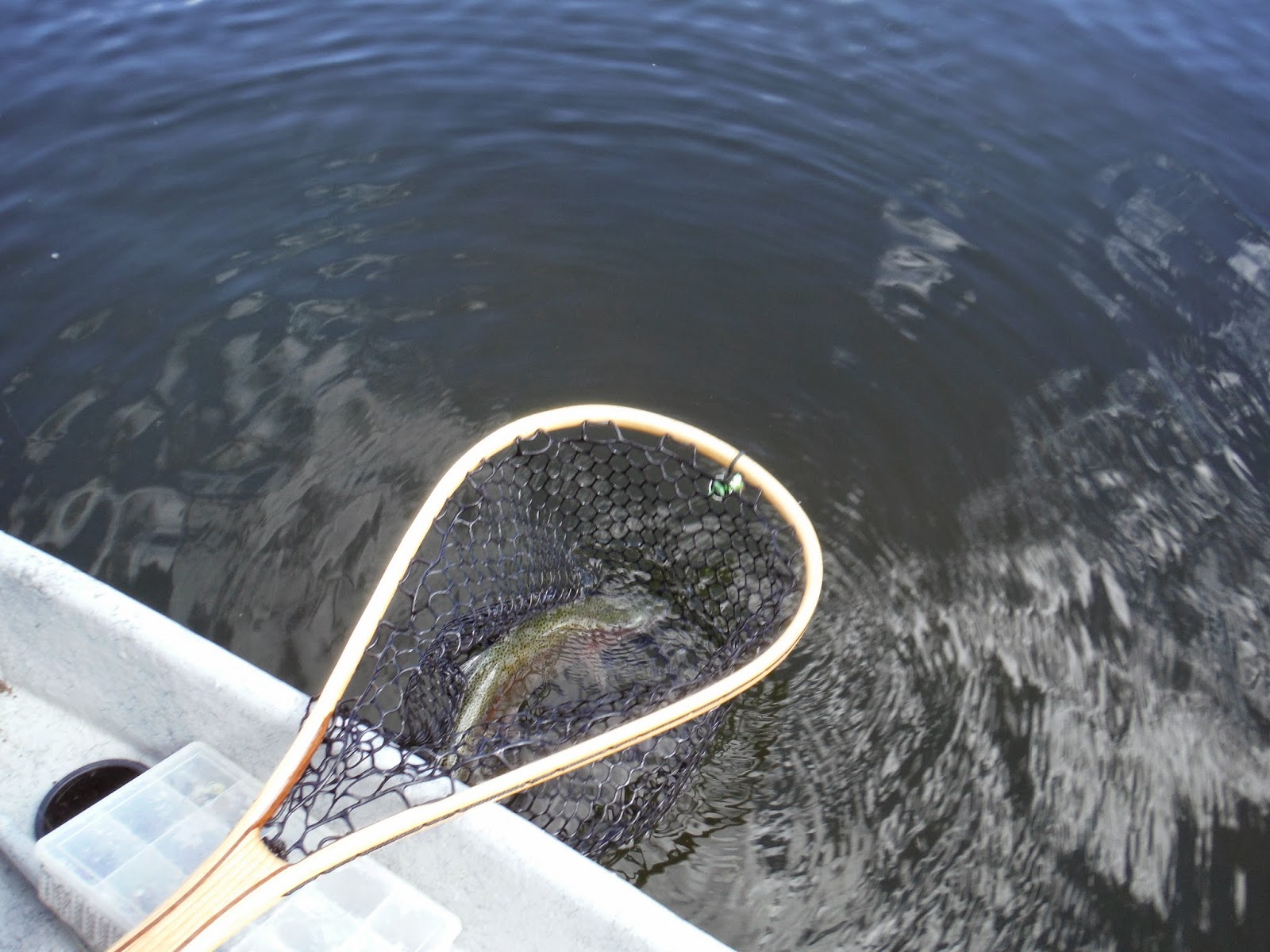 Another light sprinkle turned into a heavy rain which, morphed into marble sized hail. 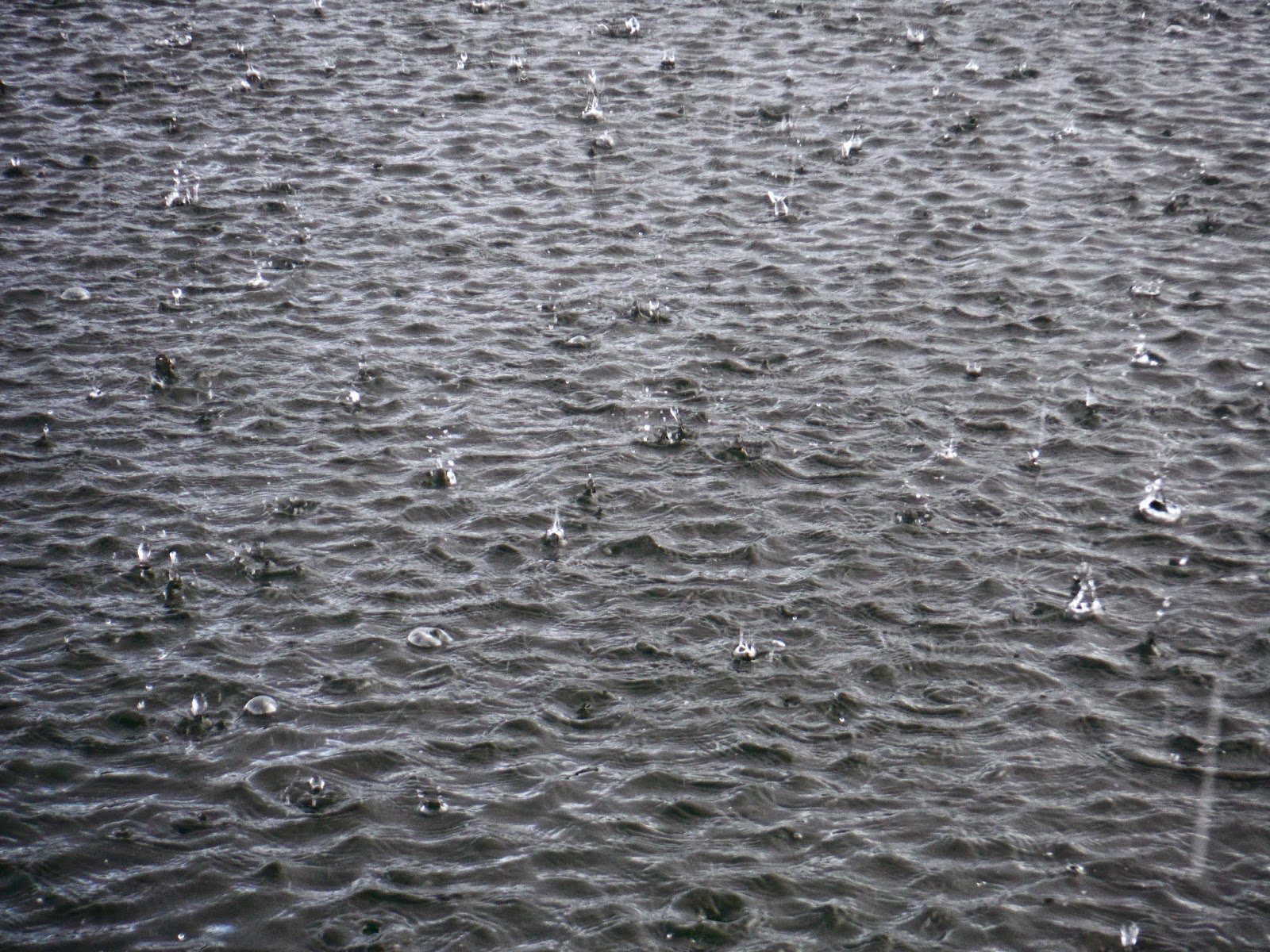 Heavy thwacking sounds came from the back of my hood as we got dumped on.  The electrical storm that was due to rear its ugly face was here, and a close thunder clap encouraged us to row to shore. 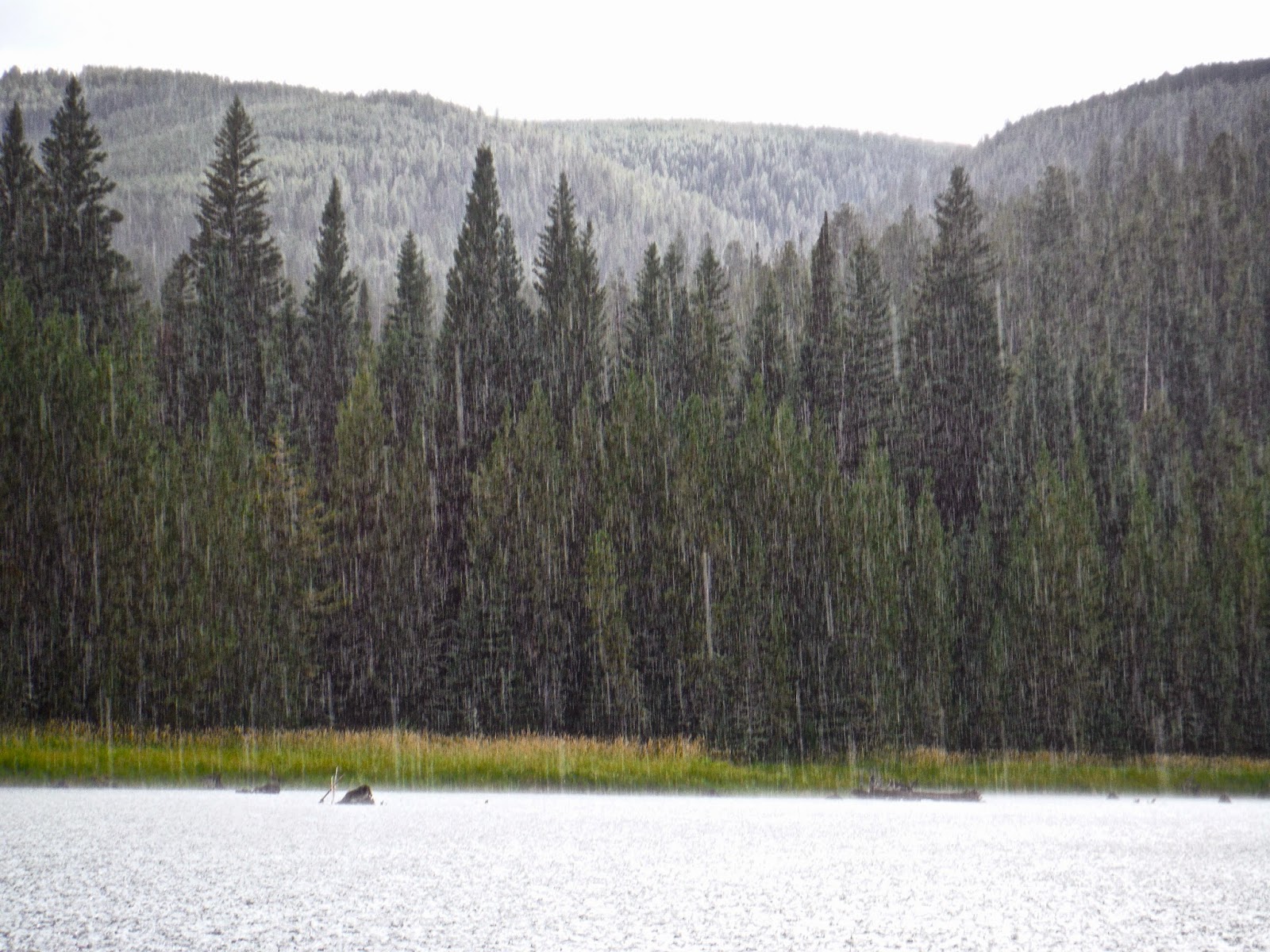 The rolling thunder passed us by, and the sun broke through the clouds.  We could still hear the thunder, but it was obviously at quite a distance.
“A rainbow…” I told Terry, pointing off in the distance. Thunder echoed from a distance, and Terry started heading towards the boat.
“A rainbow?  Hell, that’s a God thing. Let’s get back to fishing.” Terry said, and we both got back into the boat. 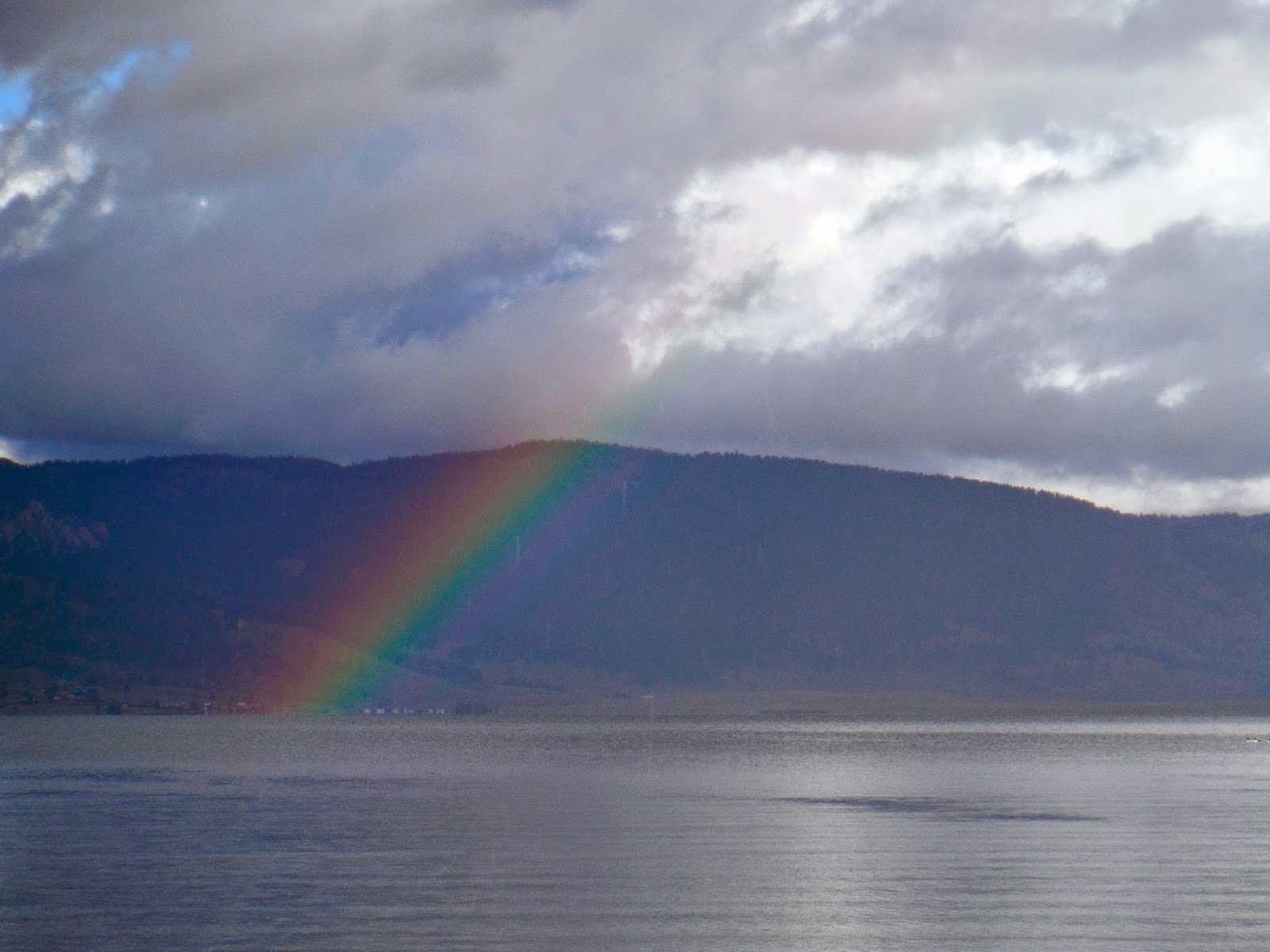 Catching for the day was over, but that didn’t stop us from trying. We soon got the hint and headed back to the truck.  Once we were there I turned my phone on and had a text message from my grandfather: “Hurry home; we have lobster bisque waiting for you.”
I told Terry what was waiting for us back at Lois’s cabin, and we both scrambled to get the gear put away as fast as possible.  The day ended cold on Hebgen Lake, but after some hot lobster bisque, we ended the day with fun, hot-headed political conversation lead by my grandfather.