Skip to content
Like a kid on Christmas Eve, I was far too excited to sleep the night before fishing Quake Lake.  My buddy, Jeff Currier, suggested fishing Quake this year, or I would regret it. His words haunted me for a good month, leaving me with a monster inside that couldn’t be tamed. So when fellow fly fishing enthusiast, Terry Kowallis, invited me to eastern Idaho with him, I immediately suggested we go a bit further to West Yellowstone and fish Quake and Hebgen lake.
The only indication I had slept at all the night before fishing Quake was a dream that I was late getting to the lake.  I woke with a jolt and reached for my phone in the pitch black.  My eyes quickly adjusted to the brightness so I could see the time… 3:58 a.m.  Despite my efforts to go back to sleep, the thrill of finally getting the chance to fish Quake Lake was too overwhelming, and for the first time in my life 6:00 a.m. did not come soon enough. 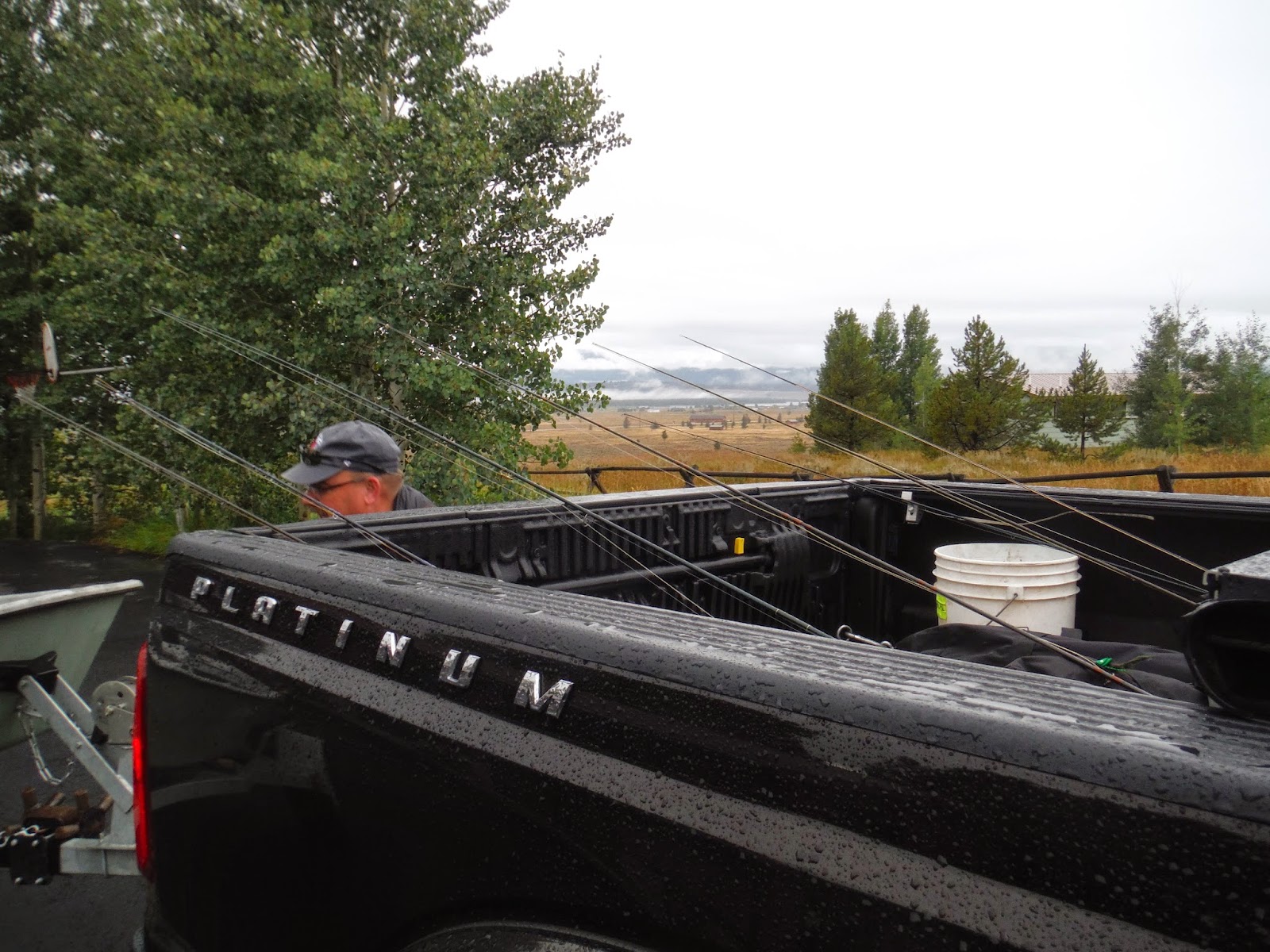 A bluebird weekend was in the forecast, but one look outside shot that prediction to hell.  Rain was pouring down and there was no sign of it letting up; but it would take more than a heavy downpour to stop Terry Kowallis and I from fishing.  We had seven rods rigged up and had packed our rain gear. Between the two of us, we were ready for whatever Quake had to offer. 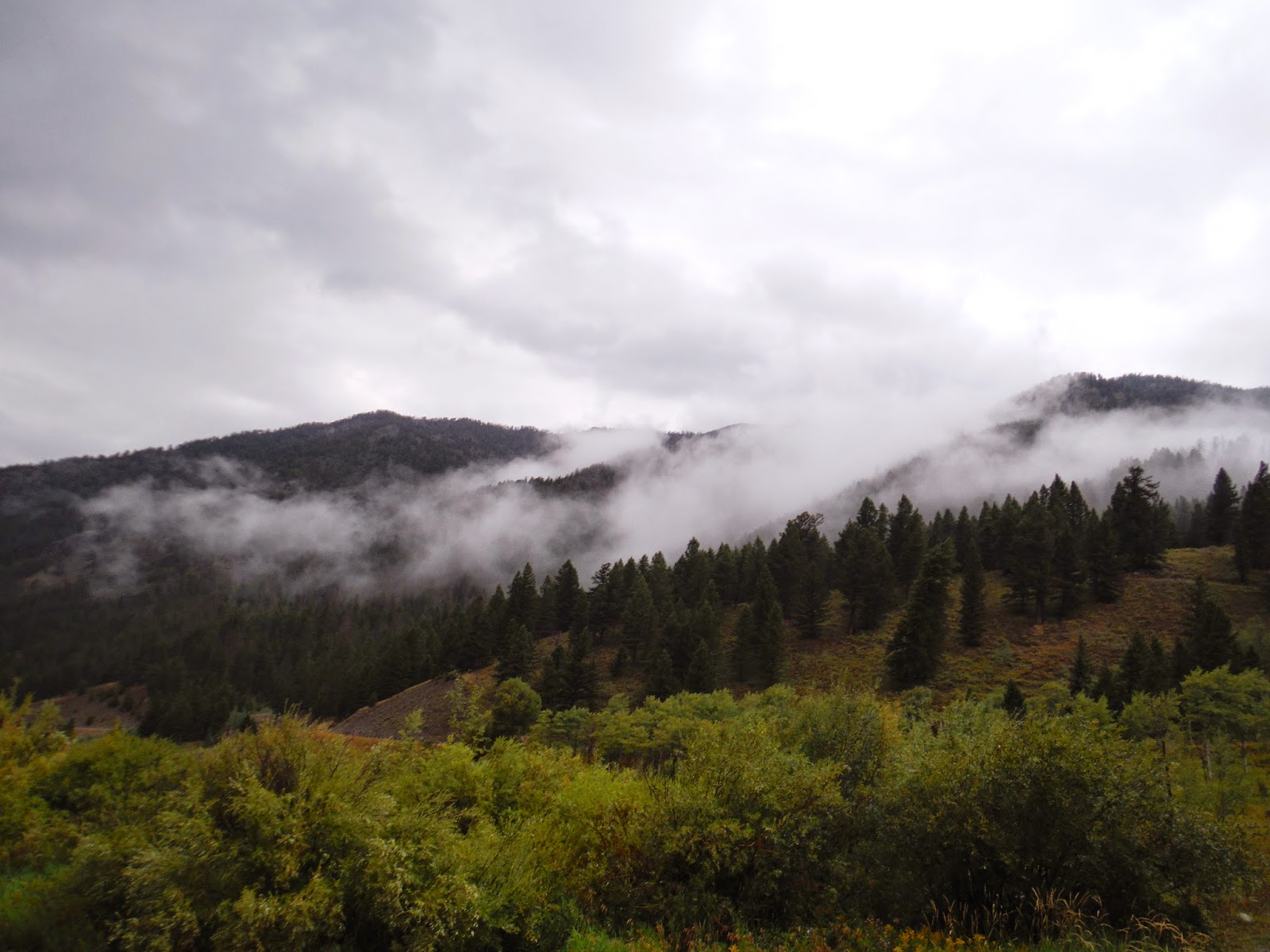 To our delight the rain subdued to a light sprinkle that was barely noticeable on the glass-like surface of Quake Lake.  I watched as the once-placid lake was disturbed by a fish rocketing out of the water. 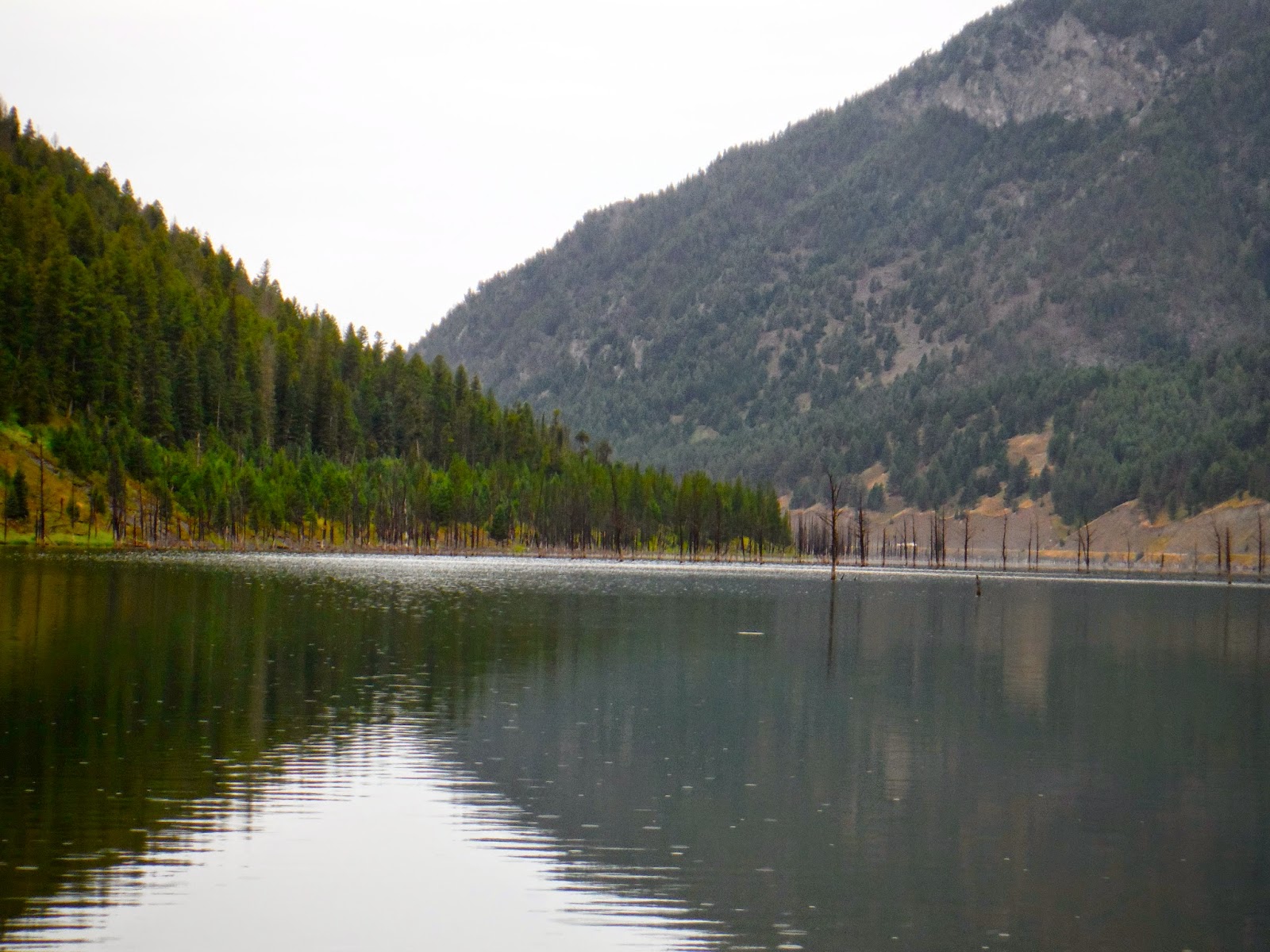 A smile from ear to ear streaked across my face as I turned and ran back to the boat where Terry was putting together the final touches. 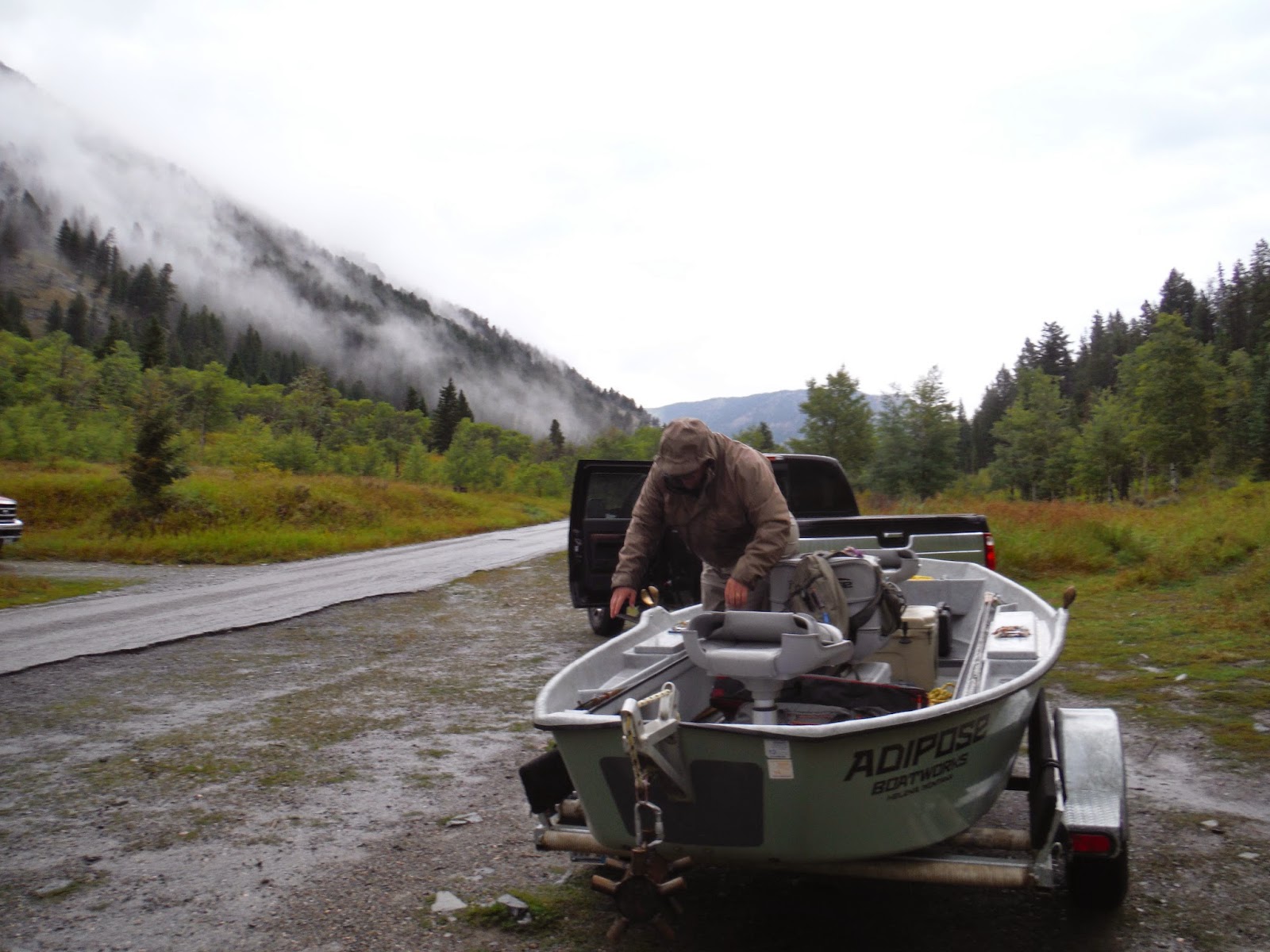 As soon as the boat was in the water, I jumped behind the oars!
“Are you rowing first?” Terry asked, as he stepped in the boat.
“Yep!” I said.
“Well then I’ll start fishin’.” Terry said, and trolled a black woolly bugger as I started to oar.
“There’s one!” Terry yelled, as he set the hook!
“Are you serious?!” I said with a large smile… “It’s going to be a good day!” 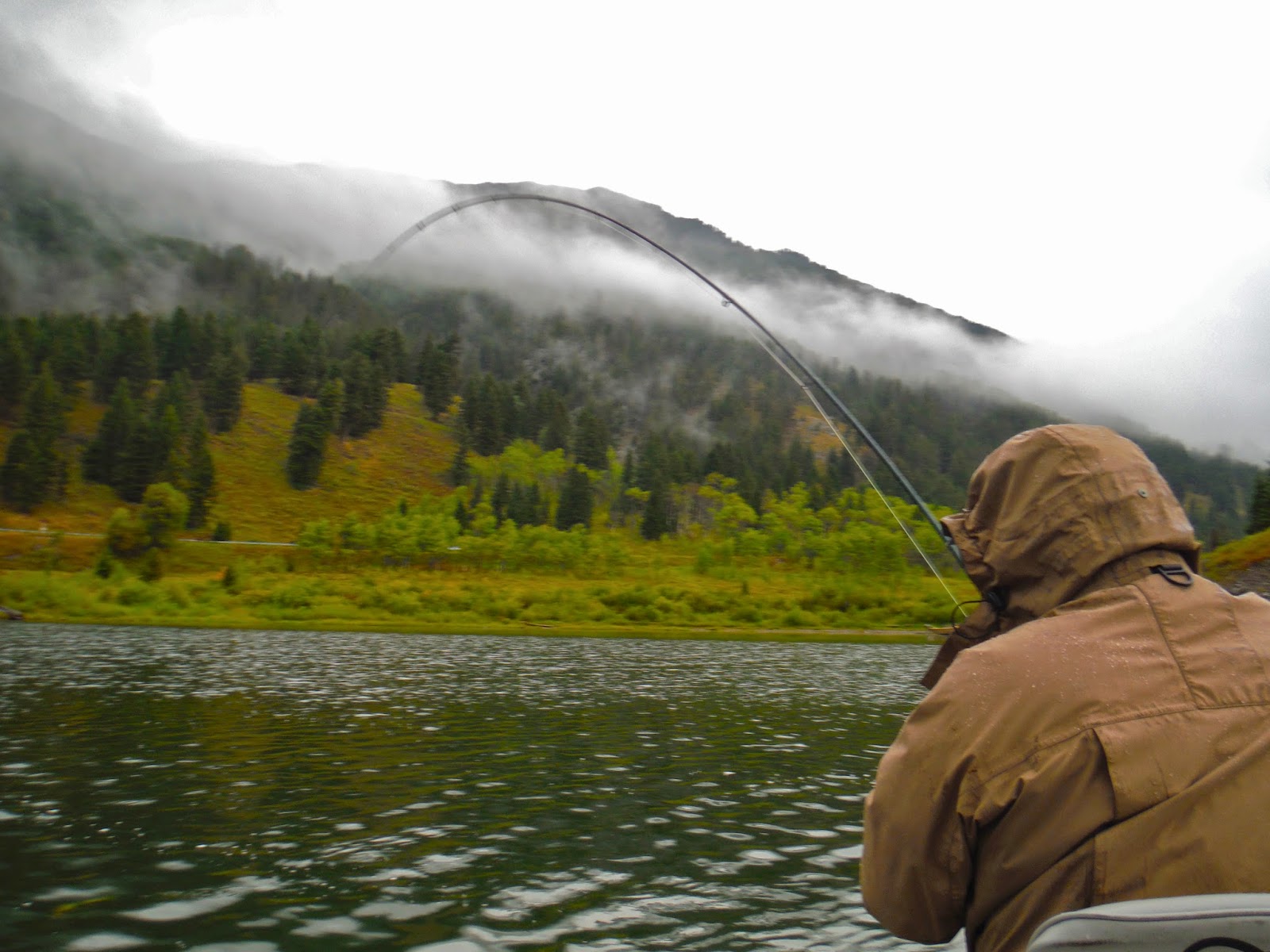 Terry’s rod danced with a fish as I grabbed the net.  With a good heave, Terry brought the fish in and I scooped it up in the net.  We were happy to get a fish in so soon, and after a second glance at the picture of the fish, it seemed just as happy to see us. 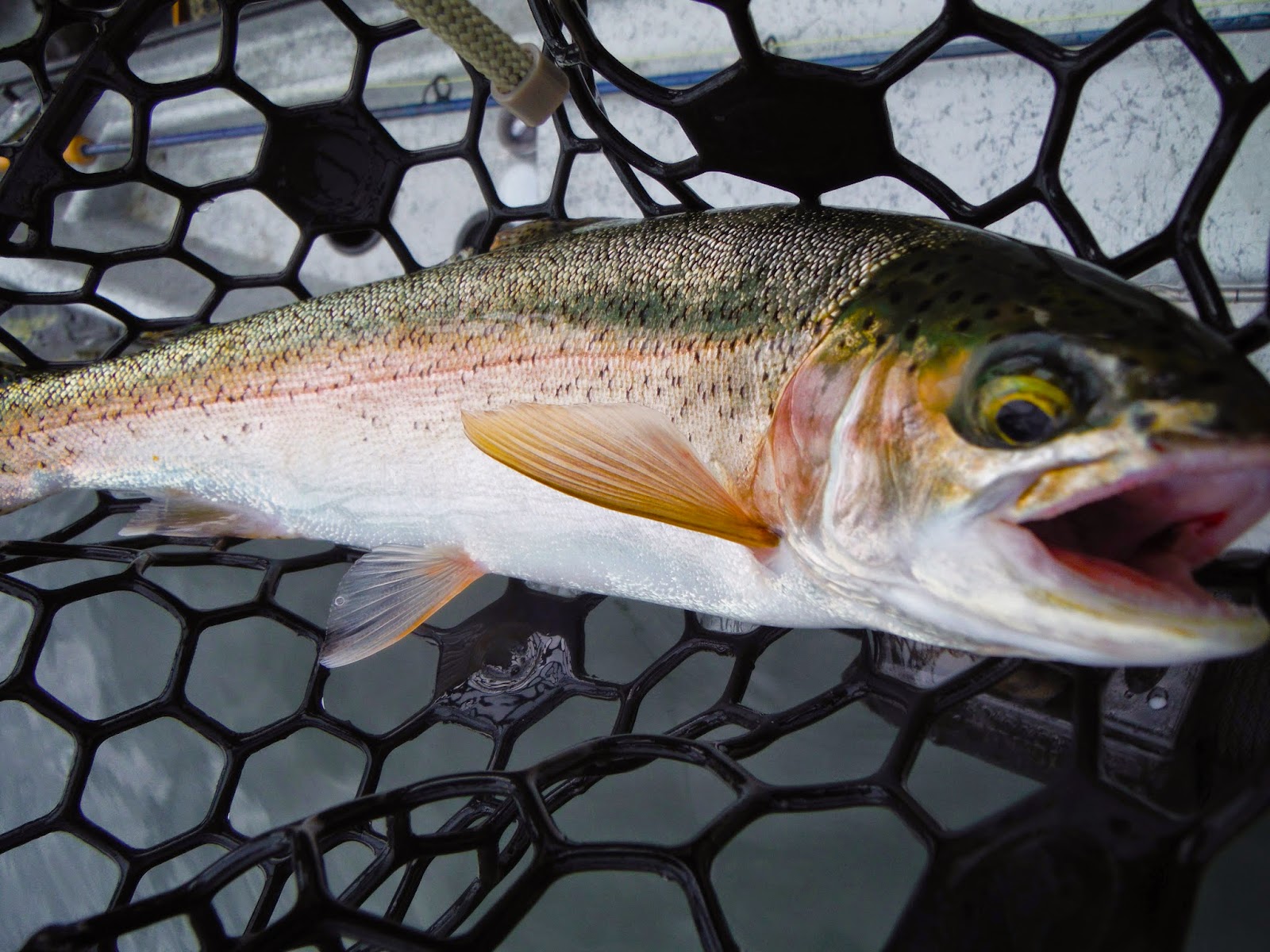 After releasing our happy fish it didn’t take long before we were in the most scenic part of Quake Lake.  “A Night of Terror” is what they call the event that took place on Earthquake Lake back in the 50s.  The land slide from the mountain that created the lake is obvious when you pass by, and around 30 campers’ remains are buried in the catastrophe.  The stunning scenery of the skeletal remains of evergreens is an eery reminder of Quake’s horrific past. 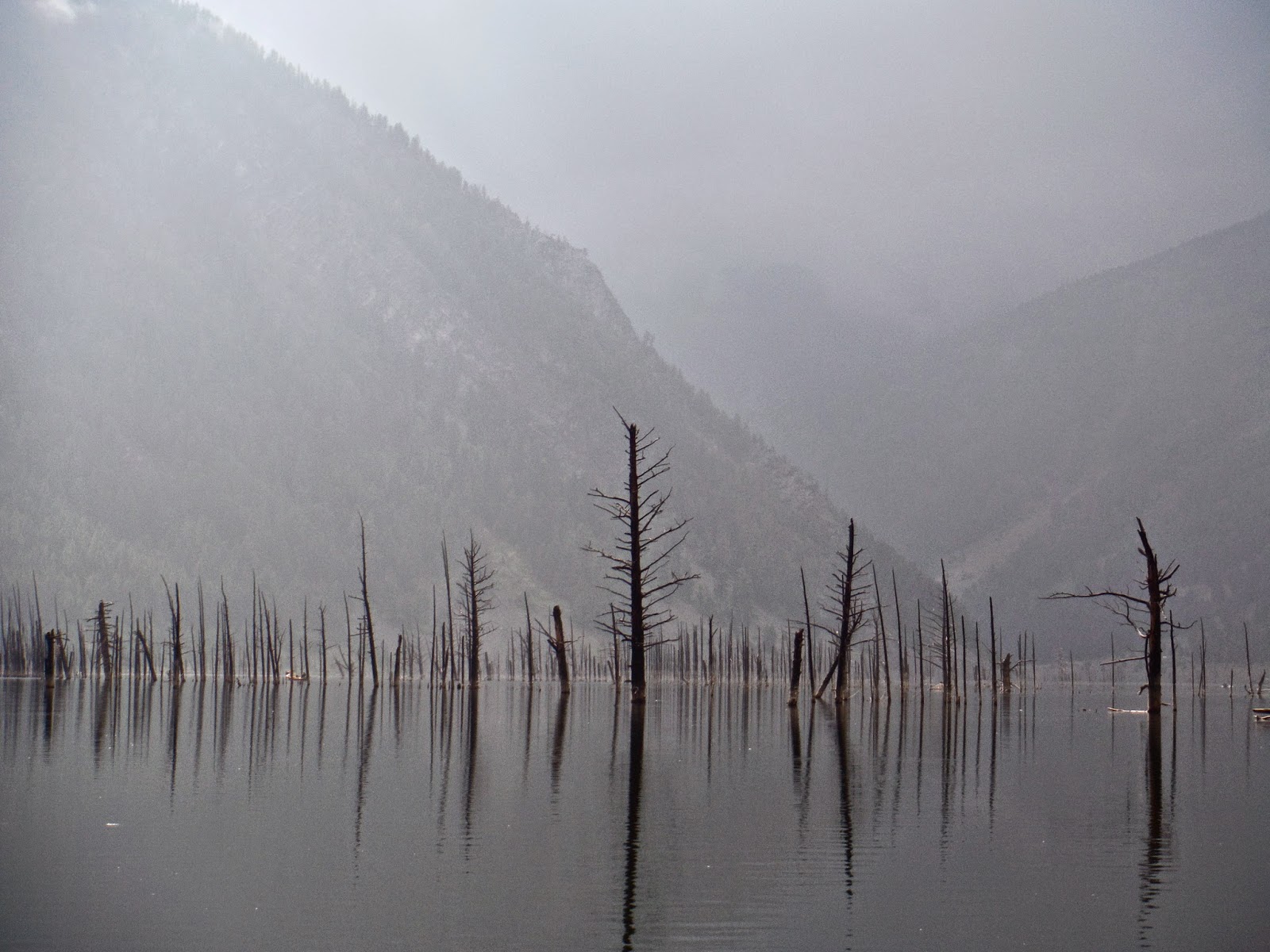 Even in the thick of the pine tree graveyard, where the ghosts of the past haunt the lake, I was overwhelmed by the magnificent scenery. No looming spirits could have any affect on me today, because I was so happy to be there…
That was, until the rain started. 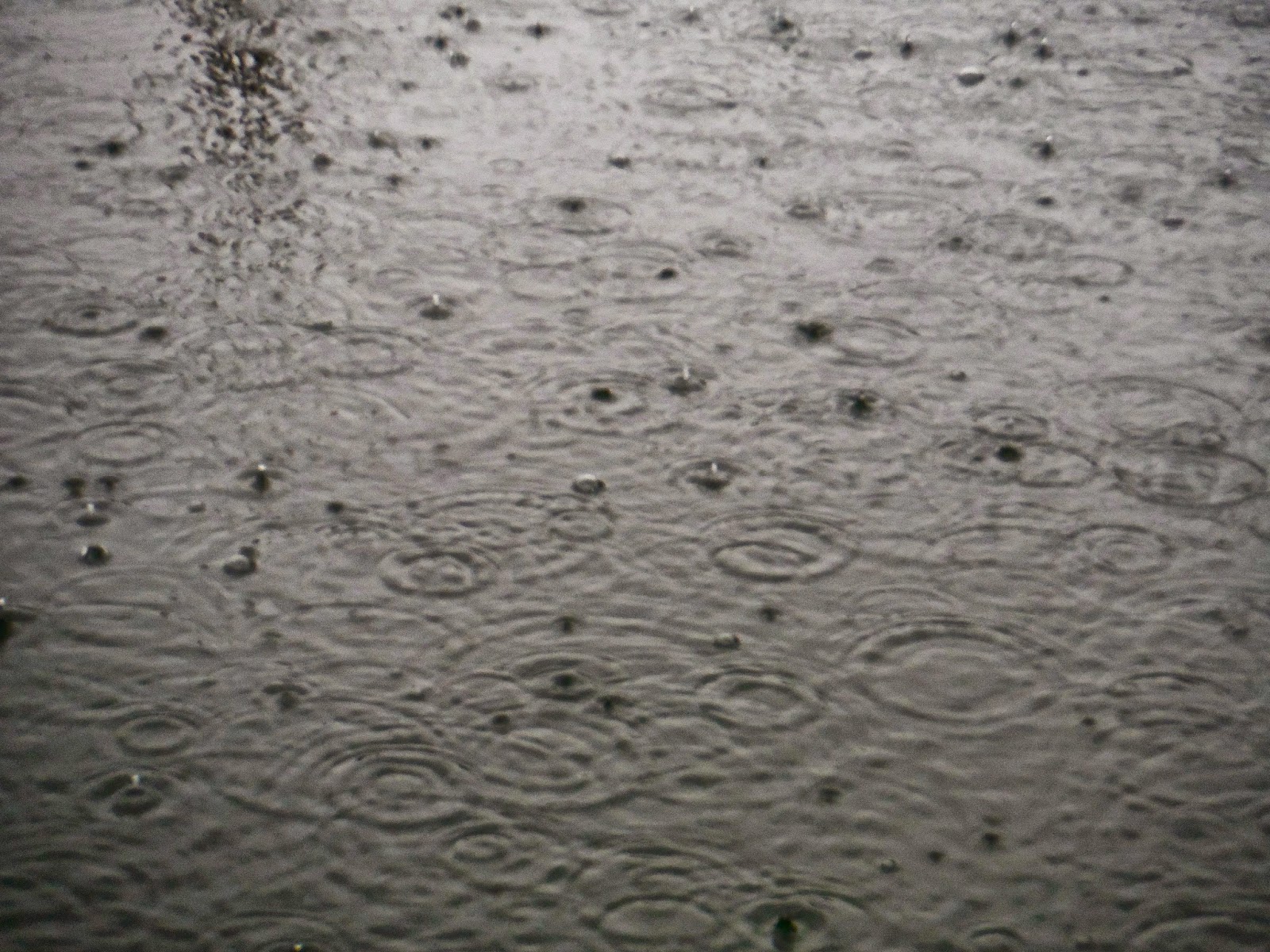 A slight drizzle turned into a torrential downpour in no time at all, and the hope for a bluebird day had dissipated. To make things even more fun, my rain jacket didn’t even pretend to be a rain jacket. Water seeped through my jacket like a sieve and into my fleece liner underneath, which started draining into my waders. There was no escaping the cold, and in no time at all I was shivering.  A loud thunder clap yanked our attention from the cold, and we hurried for the bank. Once there, Terry took the opportunity to bail some of the rain water out of the boat. 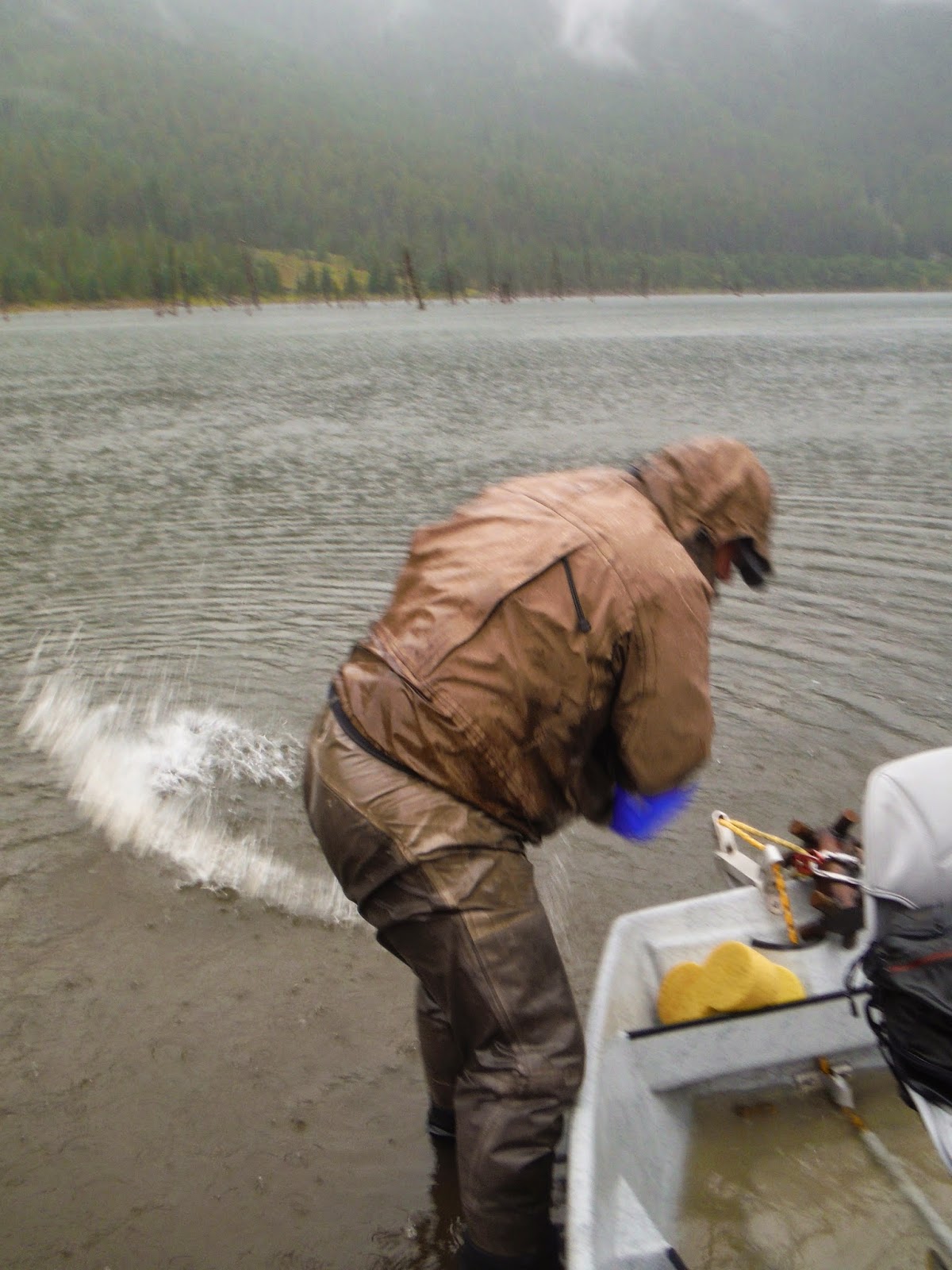 “We might as well get back out there.” Terry suggested, as the thunder passed us by, “This rain isn’t letting up, and we are getting just as soaked.”
Together we slowly got back into the boat, and I oared out, thinking that it may help me warm up a bit.  With every pull of the oars, cold water drained from my sleeves; I kept the rain hood over my hat simply as formality.  I tossed my line out after we stopped and held the rod tip in the water, which is standard practice for stillwater fishing, but today it was tough keeping the tip steady. I was shivering so violently that the rod tip was wobbling out of control, and when I felt pressure, it took a second to realize a fish had taken.
“There we go!” I said, as my rod was doubled over with a fish.  I netted it fast, and Terry was ready with the camera.  I reached in to grab the fish and felt something I have never experienced before:I knew I was cold, but when I grabbed the fish it was warm to the touch. 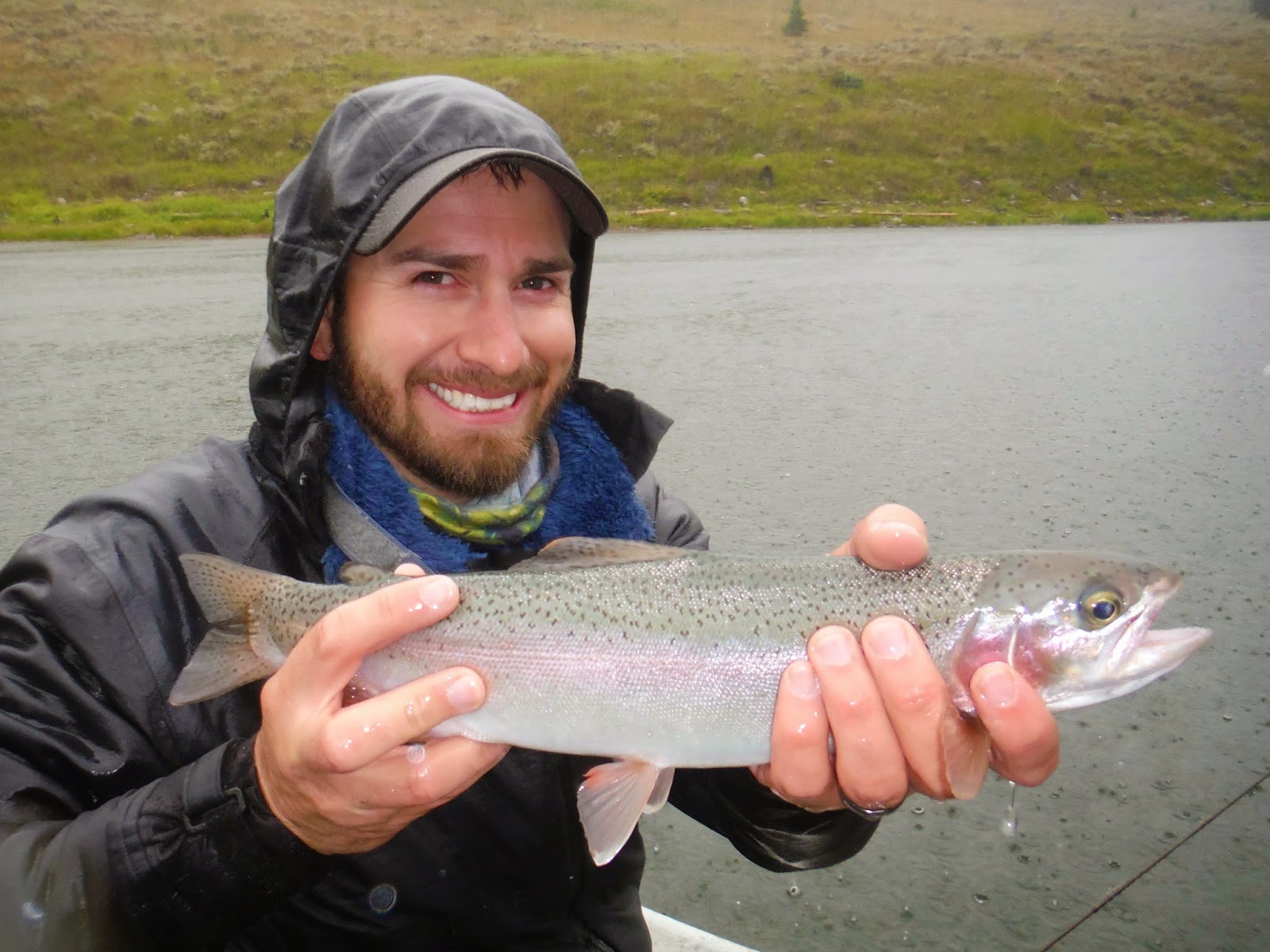 “Hell… Keep that up and we may just stay out a bit longer.” Terry said, after snapping a picture.  I reached down and placed the fish back in the water.
“Oh, that feels nice.” I said to Terry, “The water feels warm too.”
“I was just about to say I was getting cold…” Terry said, “but after looking at you, I don’t think I have room to talk.”
My fish swam off, so I pitched my line back out and was into another fish faster than expected.  I brought it in quickly and took a picture while the fish was still in the net. 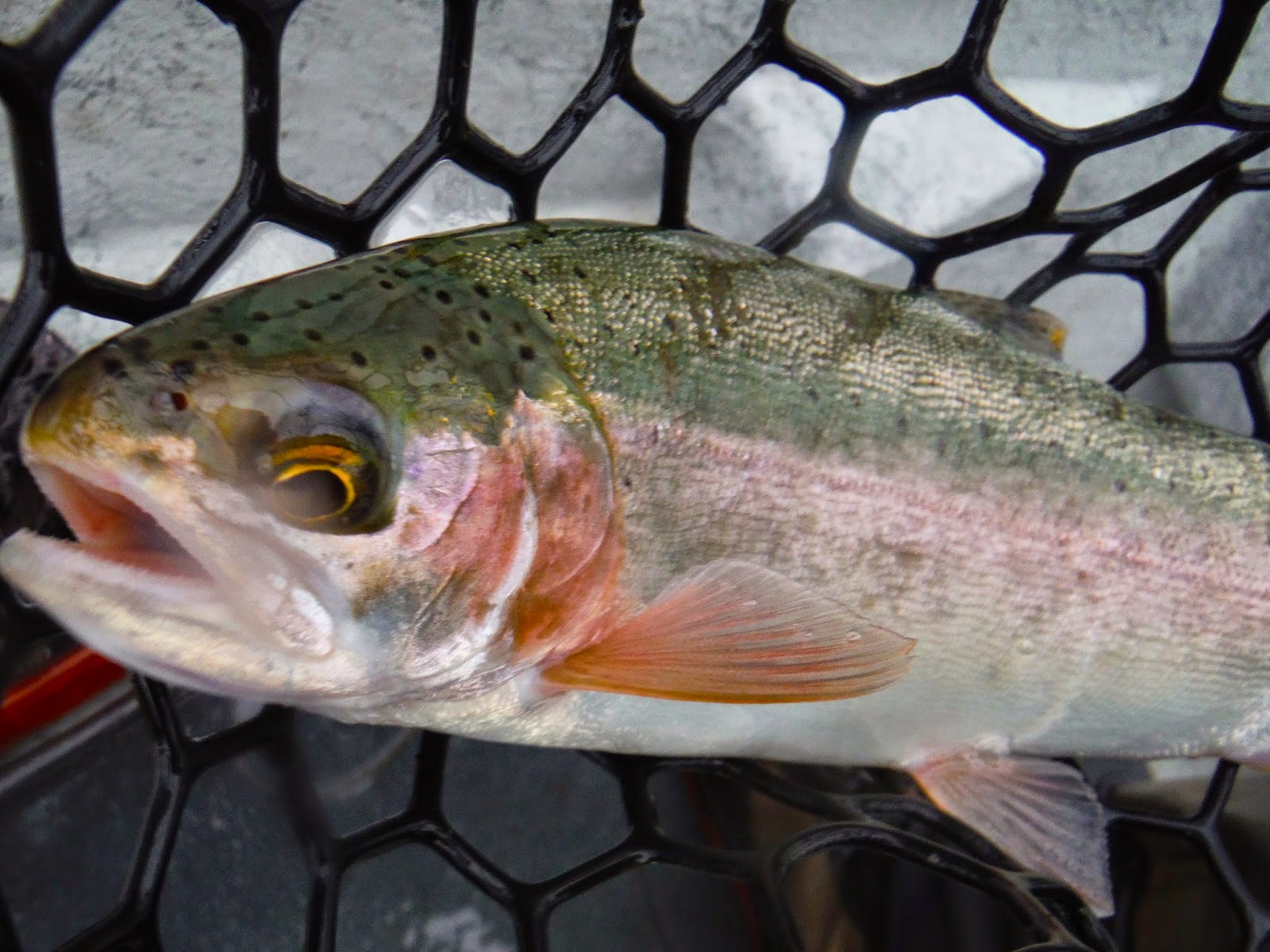 “What are you using?” Terry asked.  I flipped the net over, and let my fish go.  “It’s a Phil Rowley technique.” I said, and showed Terry the 15-foot leader with a few tags that had flies.
“I don’t think I’m advanced enough for that.” Terry said, “I bet I would have that tangled up in no time.”
“There is another way Phil rigs up…” I said, and re-rigged his leader.  After a few cast, he was in a fish! 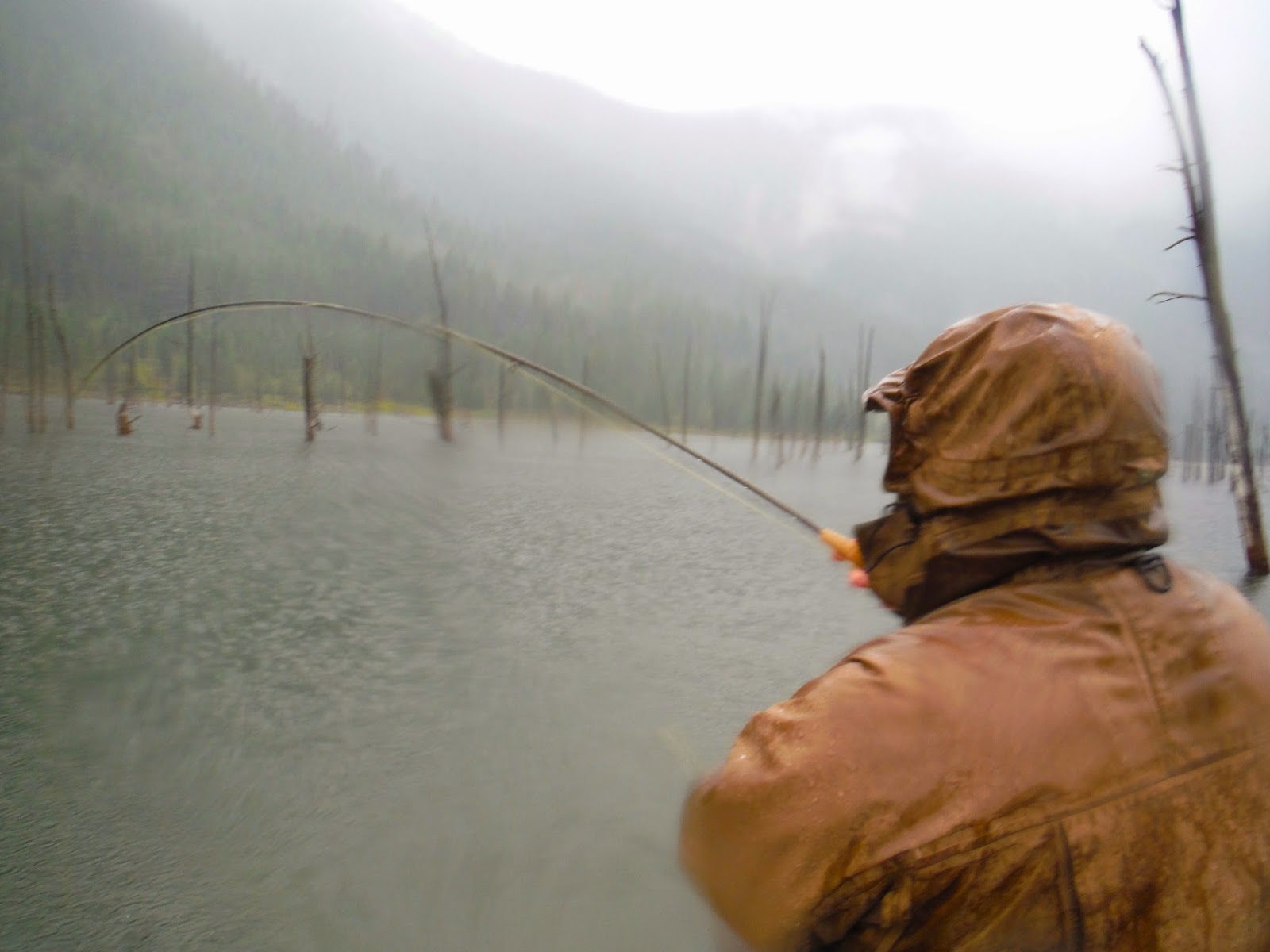 Terry brought his fish in fast, and let it go before I could take a picture.  However, in the process, as if the fishing gods decided to smile down on us, the rain stopped and a bit of sunshine was peaking through the clouds.  To make thing better, the callibaetis were starting to emerge. 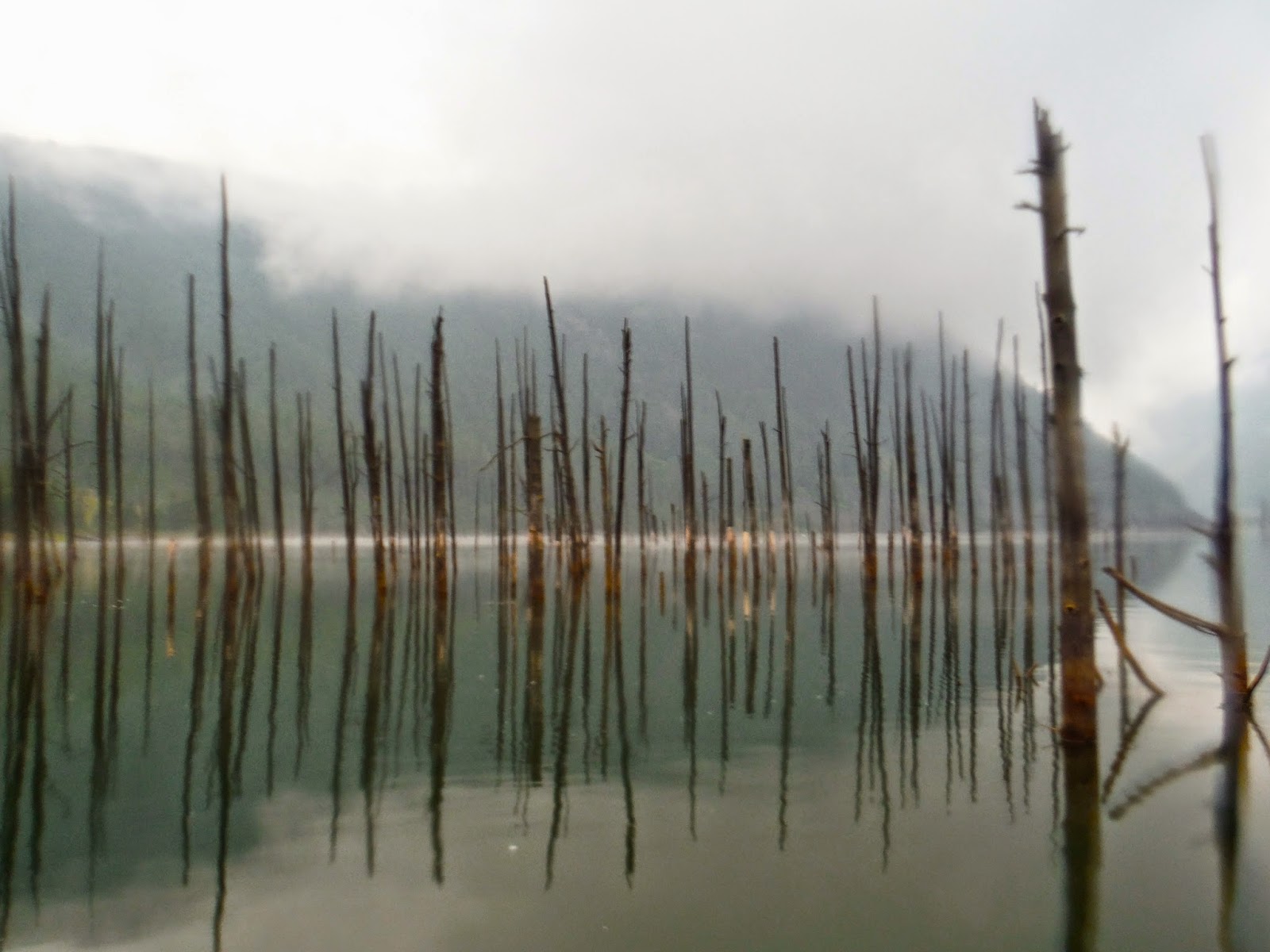 The fish that key onto the callibaetis mayfly will swim around looking for the floating bug, and eat them as they swim by.  The fish will continue cruising around in search for callibaetis to eat in its path. This is a very exciting time to fish lakes, especially if you enjoy dry fly fishing.  The fish that eat this way on stillwater are called gulpers. 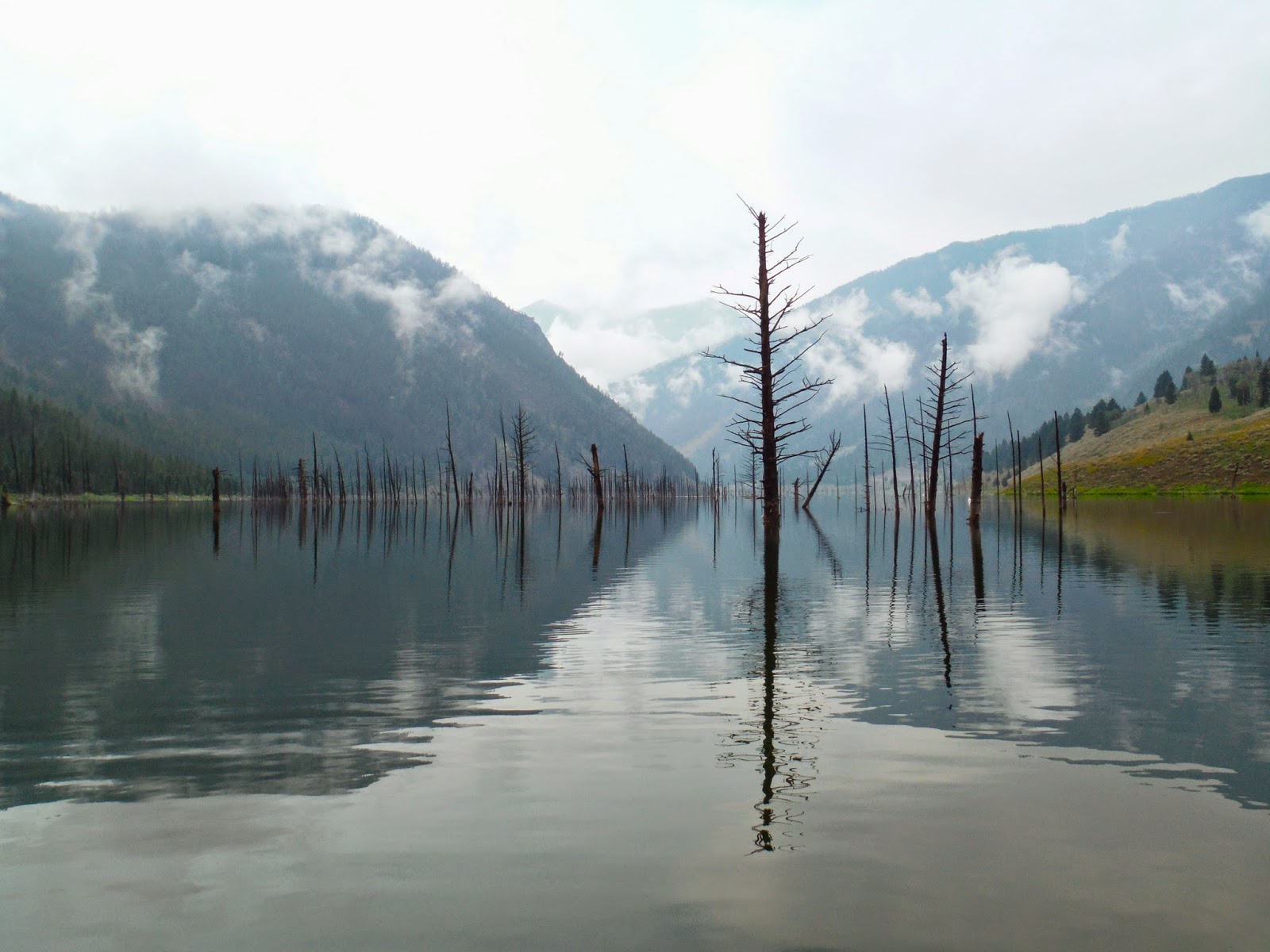 “I’m seein’ gulpers!” Terry said happily, as the day warmed up fast. I took off my drenched jackets and got in the front of the boat. Still shivering, I casted out my parachute adams to a gulping fish, and it took! The fish fought like crazy before it shook me off. 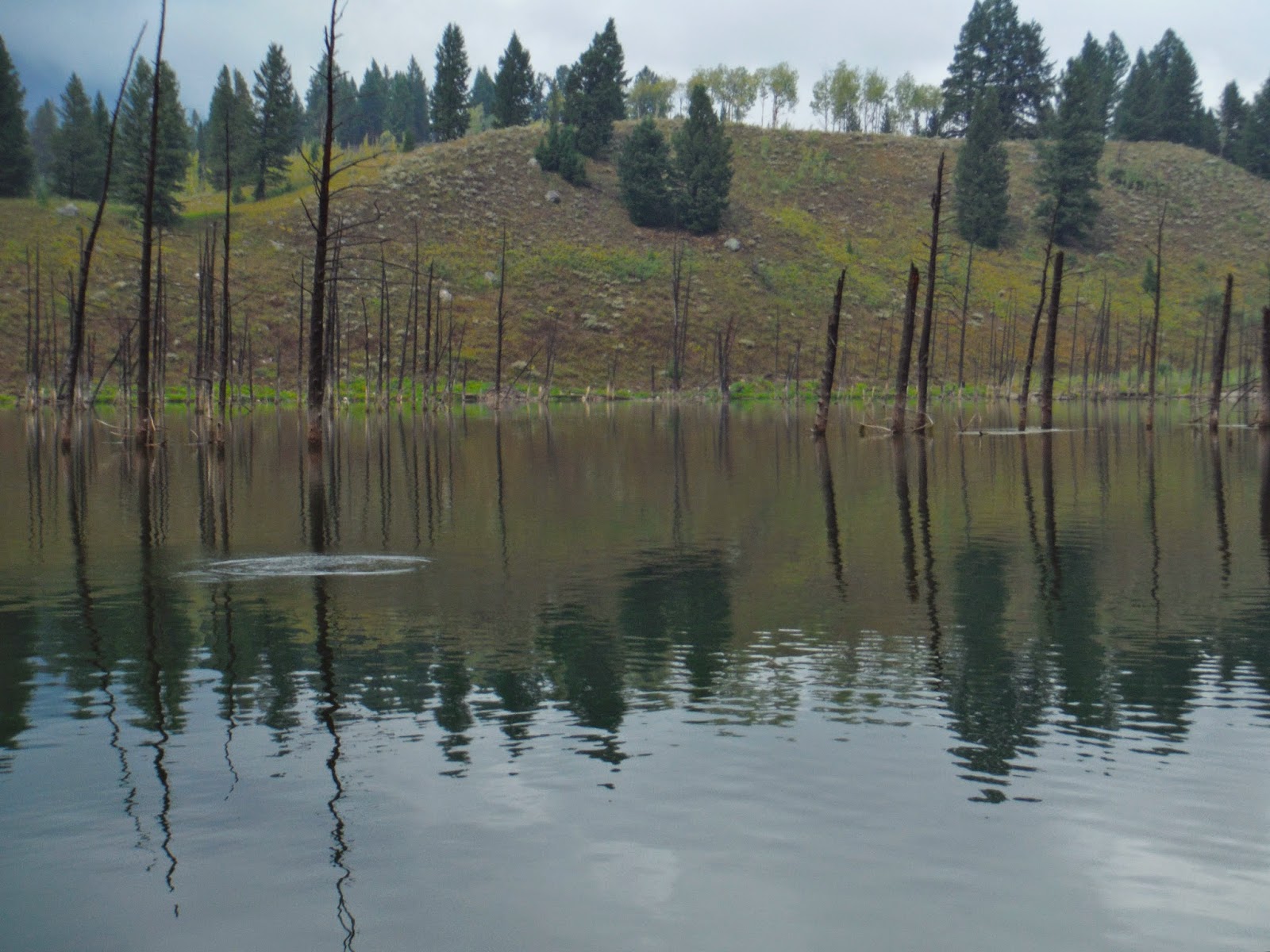 “This makes waiting through all the rain worth it!” I said happily, as both Terry and I started catching fish after fish.  There was no time to take any pictures; we both had to be on our game as the gulpers started.  A quick rise here… there… then quickly throw your fly in its path and WHAM! 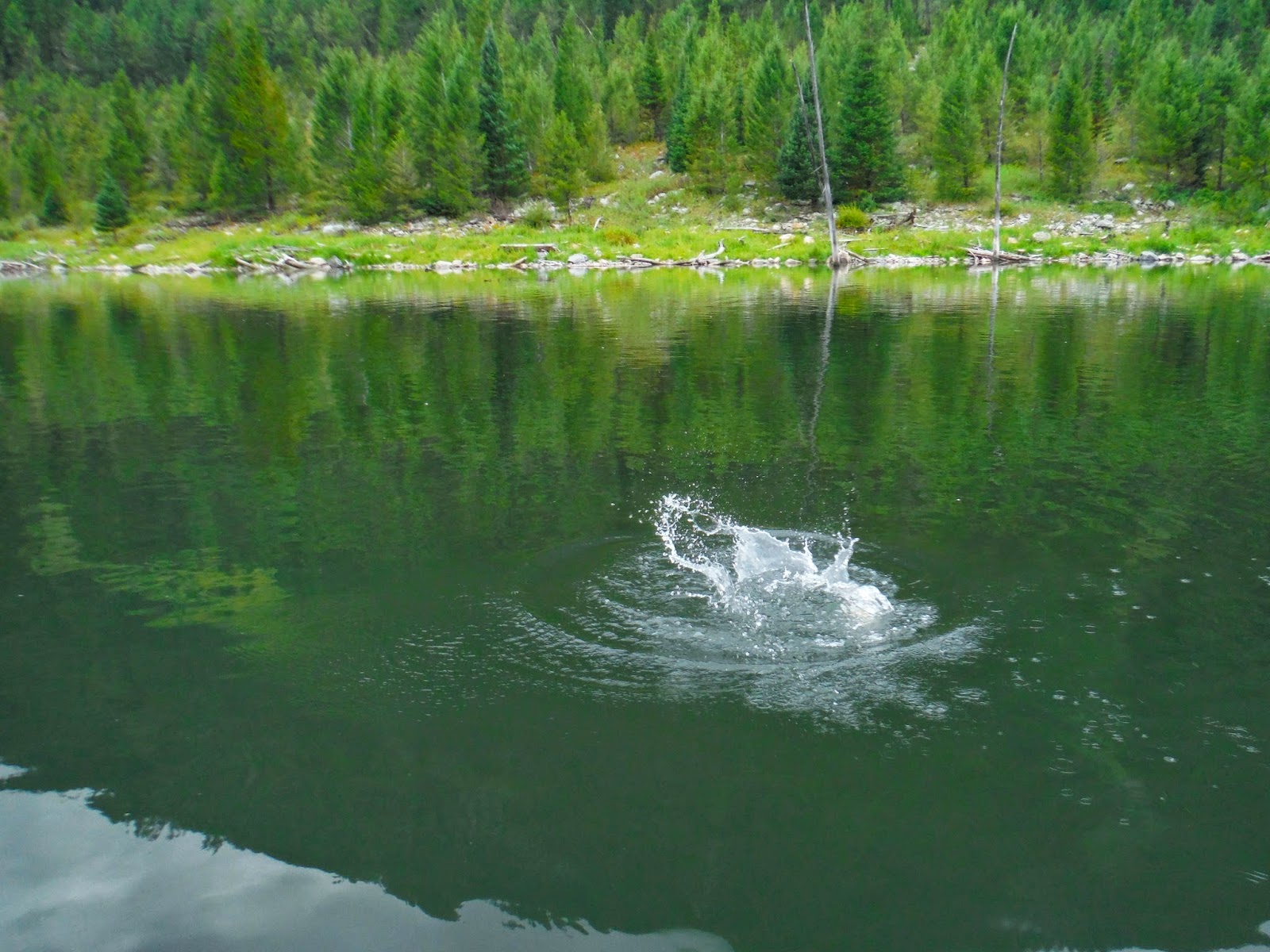 “I need at least one picture of a fish, Terry.” I said, netting another fish.  Terry pulled himself away from the gulping fish to snap a picture of me, then immediately went back to fishing. 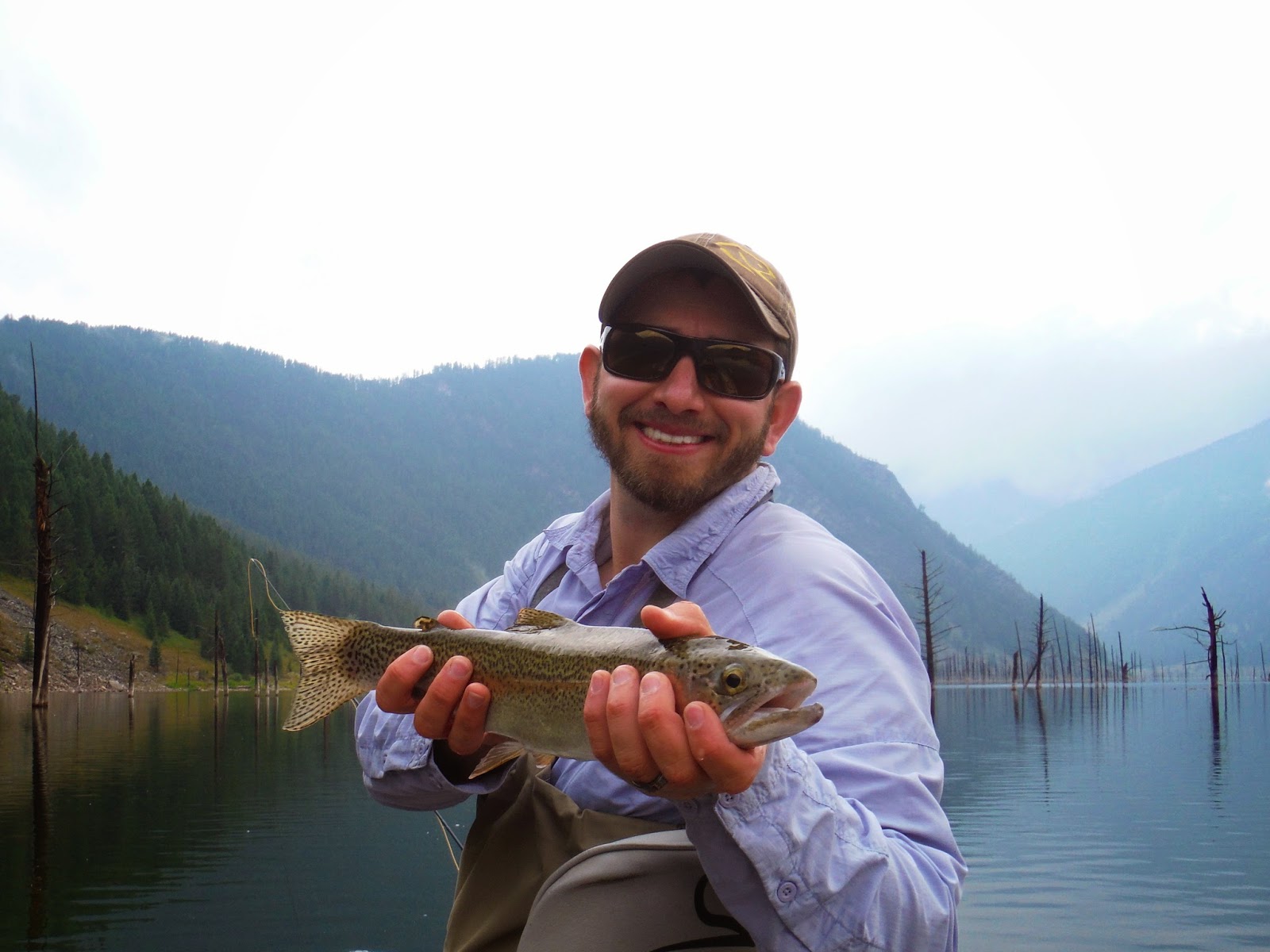 The fish were moving much faster that I would have thought gulping fish would move.  Double-hauling to get your fly in front of the fish was what worked best for me, and watching a fish come up from the depths with its mouth open to eat your fly was intoxicating. 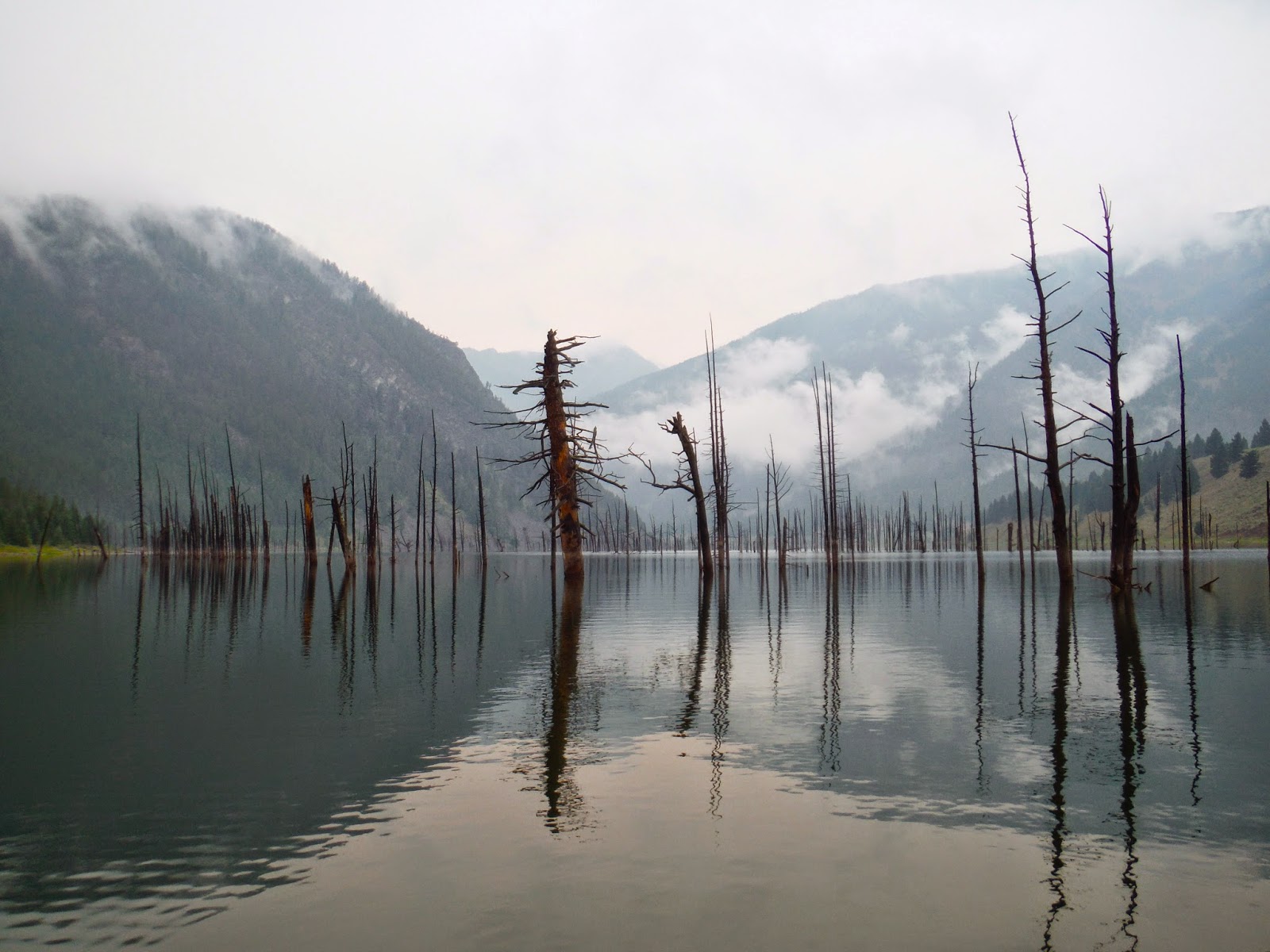 Some time during the excitement I had stopped shivering, and my quick dry casting shirt was now dry.  With every fish that took our fly we were reminded it was worth the wait. 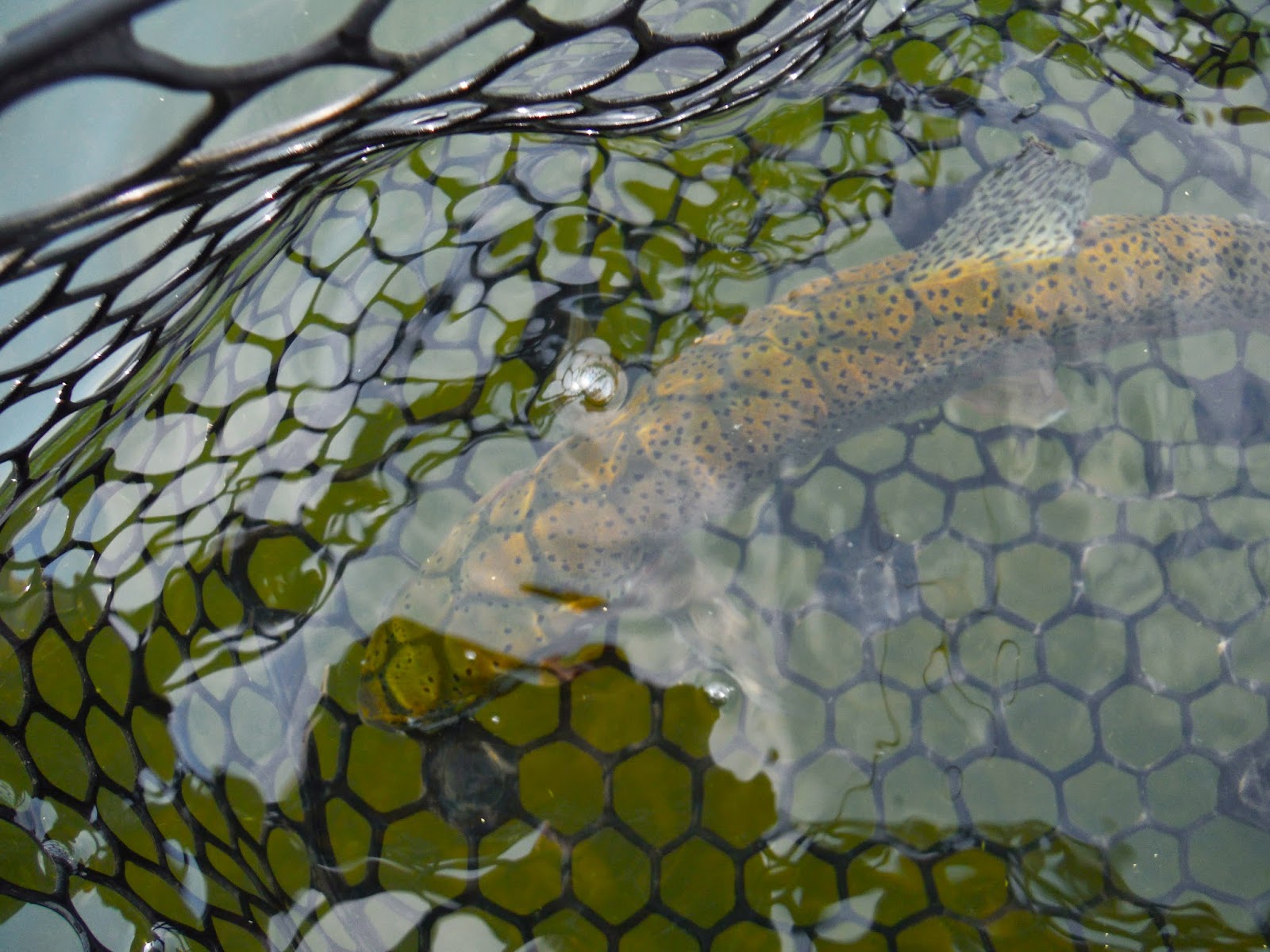 Caddis started hatching along with the callibaetis, which stirred up an even bigger gulping frenzy.  I switched my fly to a CDC caddis, and after a few refusals it ended up being the right move. I had simply flicked my fly out no more than a few feet from the boat, and as I stripped out line from my reel it got slammed! 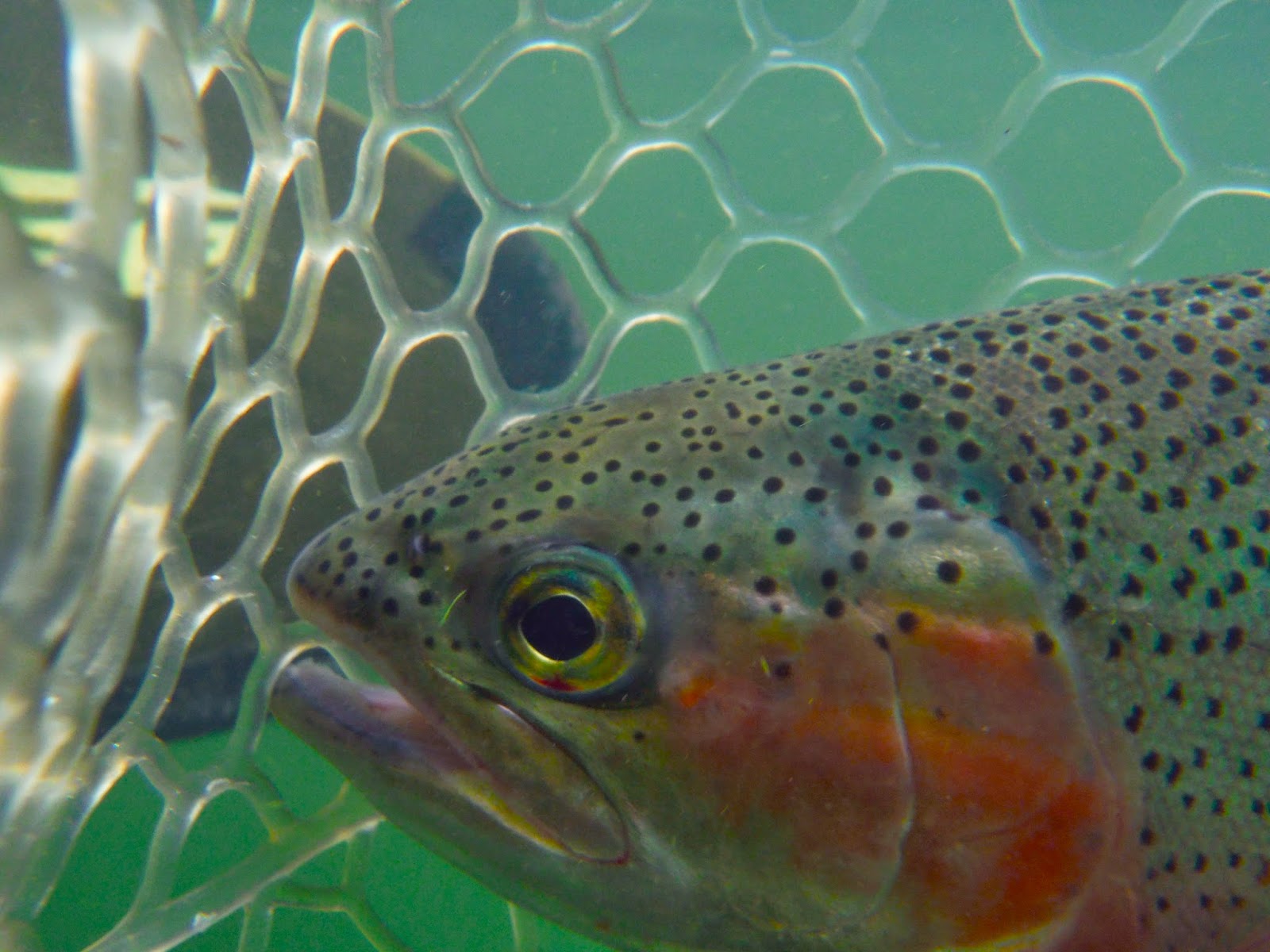 After a few more fish I handed Terry a CDC caddis, and he was experiencing the same amount of success I was. 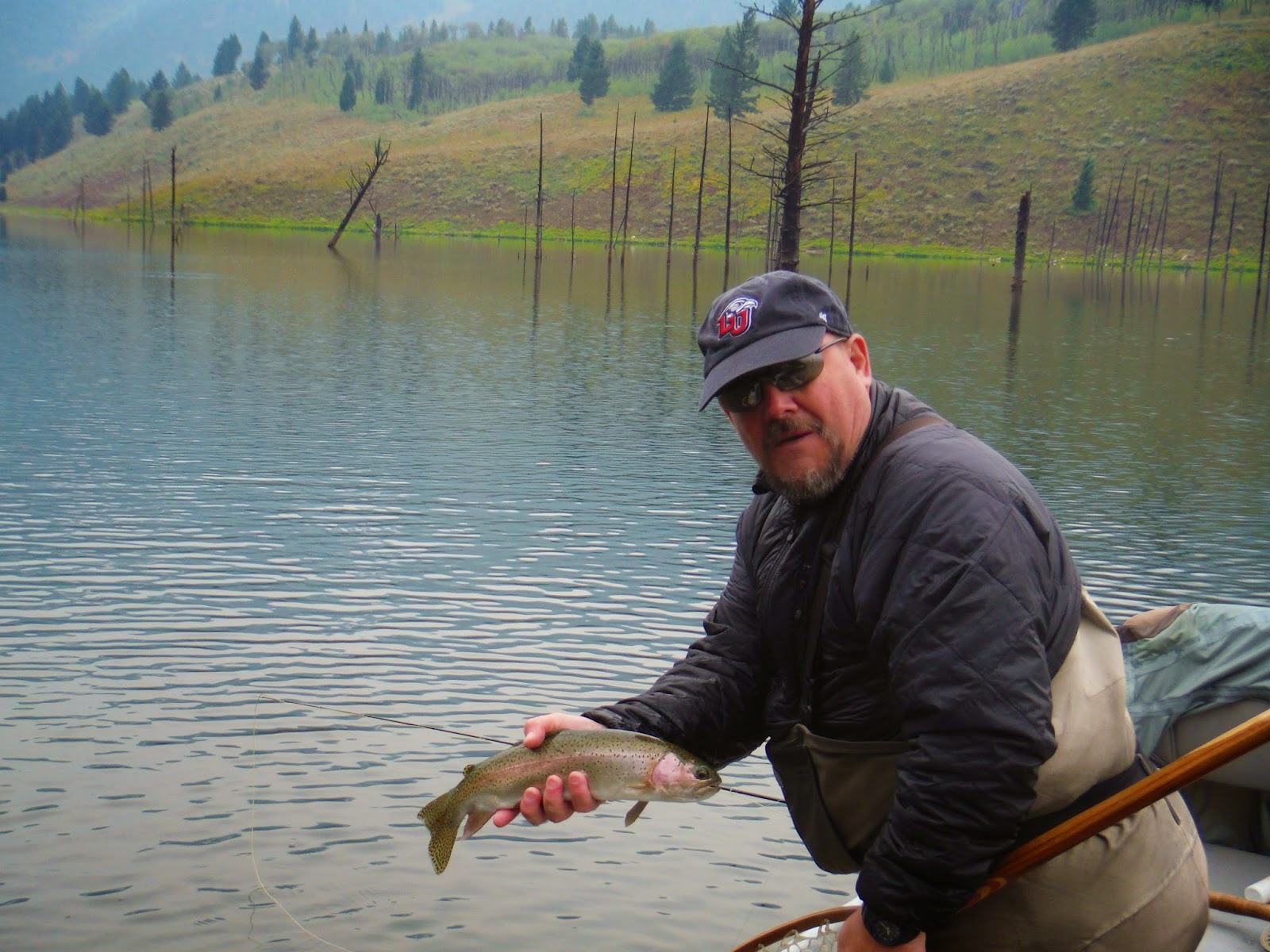 Time flew by as the hatch took place, and when the frenzy started to slow down I sat down to hydrate with a V8 Fusion.  I could see a few fish gulping in front of Terry, and he was right there with a nice cast.  I turned away and notice a few fish rising towards me, and with a V8 Fusion in one hand, I flicked out my fly near the gulping fish.  My fly sat there for a second as I took another drink, and when I did, a fish nailed my fly.
“Mmmmmm!” Was all I could muster with a mouth full of juice before I set the hook.
“Now that just isn’t fair.” Terry said, as I quickly set down my drink to bring in the fish. 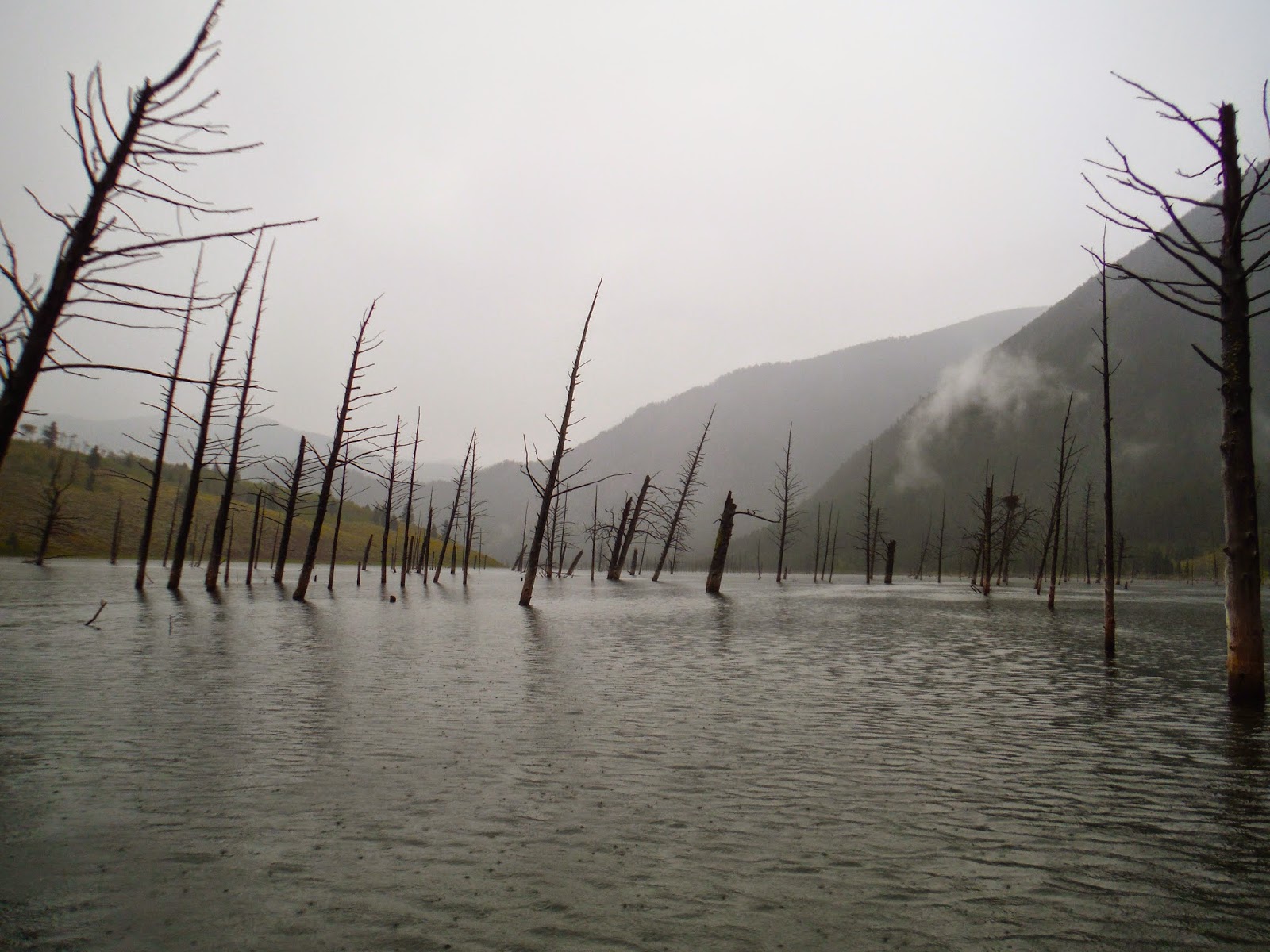 Clouds started rolling back in, and the hatch was now over.  The gulping activity was few and far between as the temperature started to drop.  We had already started heading back when we heard another loud thunder clap. We pulled out the boat just in time to hear another bolt of lightning boom overhead.  The sound of the bolt was so loud we ducked for cover.
“Want to come back here tomorrow?” Terry asked as we pulled out onto the main road.
“I would not be able to sleep at night if we skipped out on Hebgen Lake, and Phil Rowley gave me some pointers on where to fish.” I said.
“Then Hebgen tomorrow it is!” Terry said.  We drove home in torrential rain, thankful for the few hours of sunlight that made fishing on Quake Lake a day to remember.