Skip to content
My brother is now living in Omaha, Nebraska, and every so often he gets the chance to come and visit. When he does get back, there is always a plan to go fishing! He had to catch a flight at 5pm the day we planned to fish, so the Boise River in town was our only option. 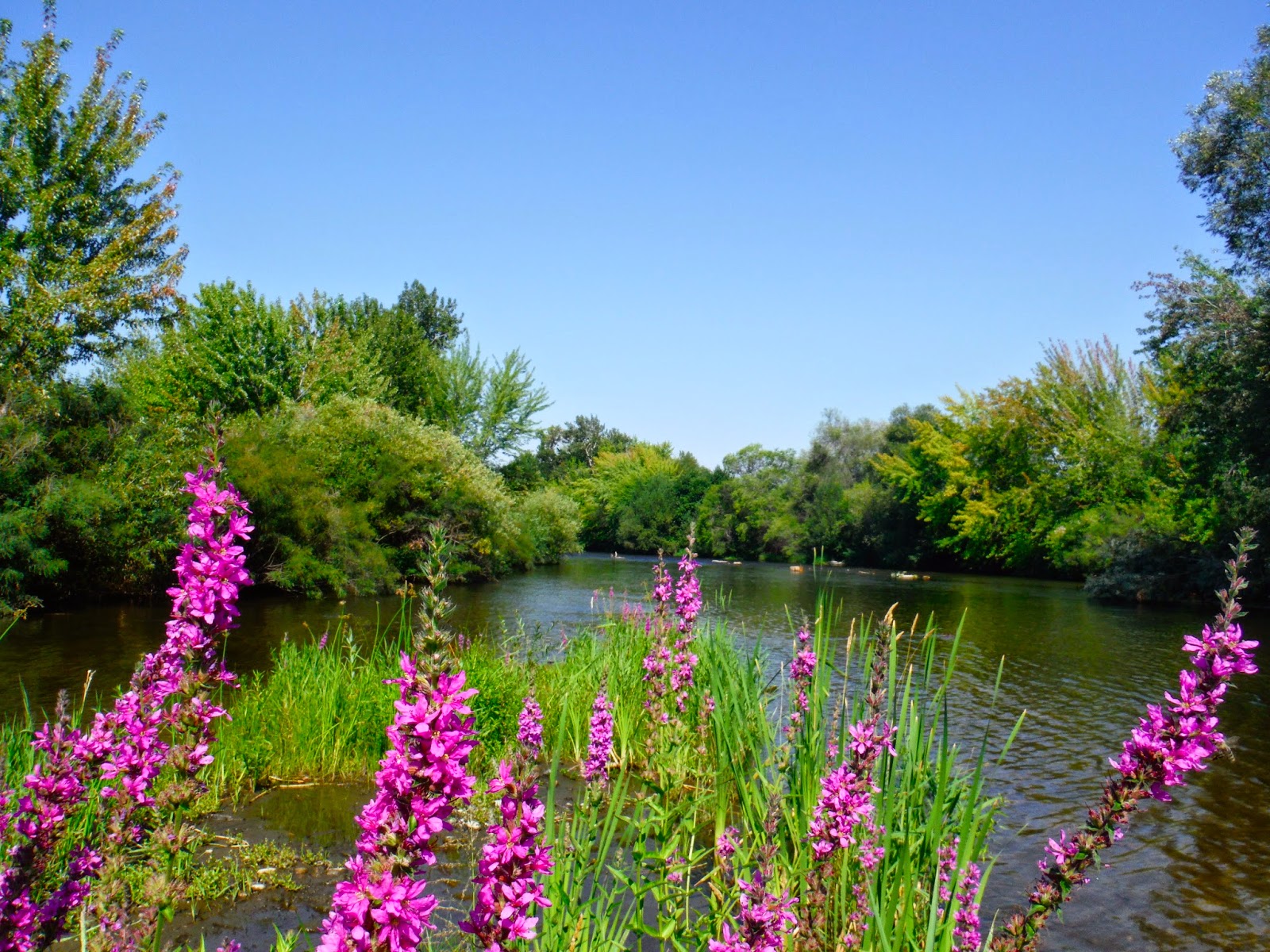 “I’m going to throw on this brown Dali Lama!” Feef said, happily tying on his fly.
“Look what I’m going to use!” I said, holding up a large Kelly Galloup Barely Legal streamer that was so big, it could pass for a muppet on a hook.
“Seriously?” He asked.
“Heck yeah! Go hard or go home, Brother!” I said before we quickly made our way into the water. 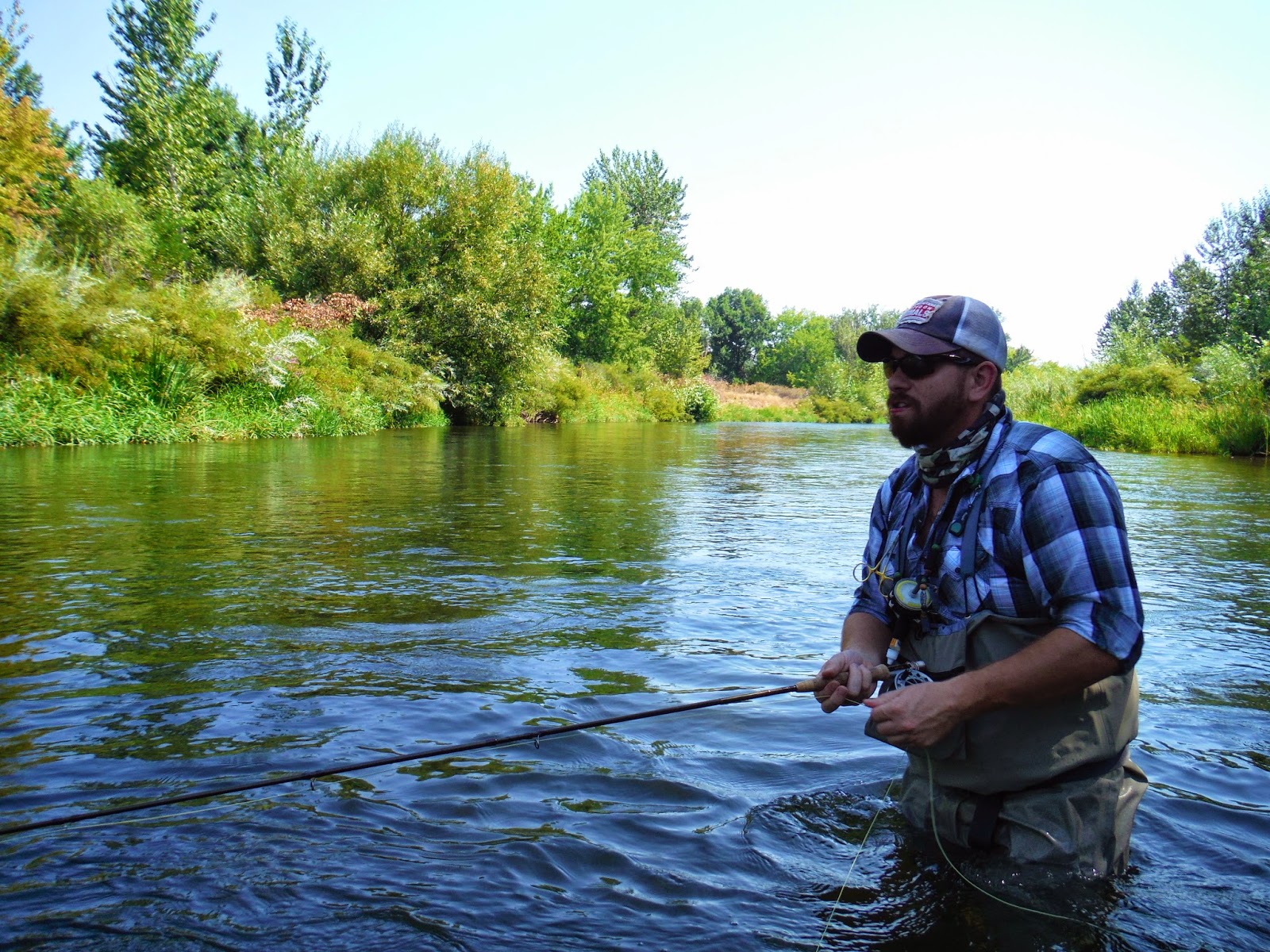 Side by side we walked the river, chucking our streamers in every nook and cranny of the river’s edge.
“I just saw a fish go after your streamer!” Feef yelled, pointing.
“No, Brother… That was just my streamer.” I said, lifting it out of the water.
“That thing is huge; do you really think a fish is going to hit it?” He asked.
“In theory… Yes.” I said as I shot it into another nice section of water.  Two quick strips back, and a chrome flash bolted from the depths and nailed my streamer.
“See, there it is!” I yelled, as my fly rod sprang to life.  The fish pulled with all of its might, and was putting up quite a fight.  I was surprised I wasn’t able to bring it in faster with my 7 weight fly rod. After all, the 7 weight is made for power.  After a great fight, I netted the first fish of the day. 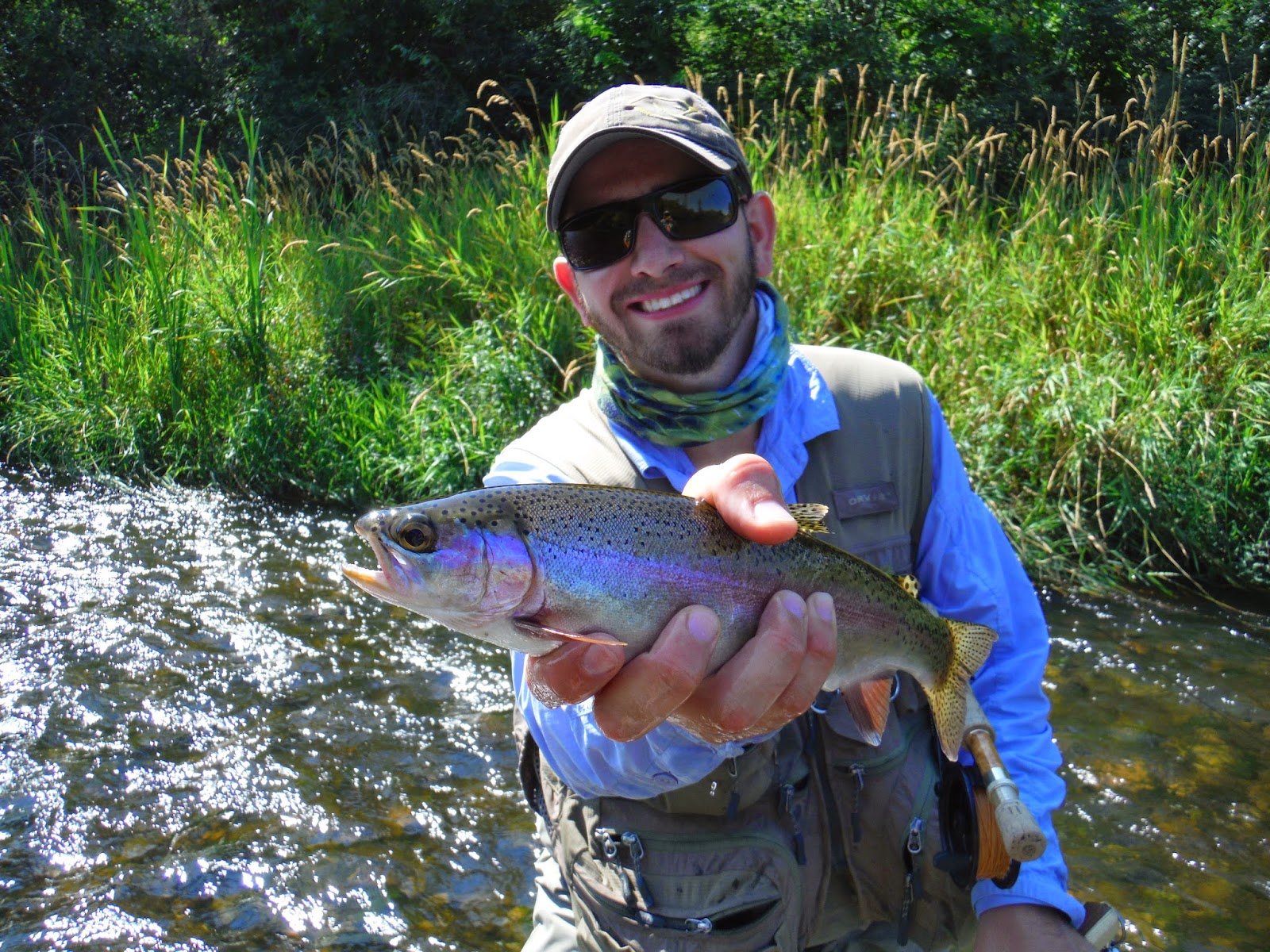 Feef immediately went back to fishing, and I could tell he was hungry for a fish.  He rocketed his streamer to a stagnate part of the river, and a fish darted out and hit his Dali Llama.  A quick jolt was all he felt before the fish quickly disappeared.
“Let’s keep moving. It’s gone.” I suggested, as Feef tried and tried again for that same fish.

We came to a nice riffle in the river, and I rigged my 10 foot 5 weight fly rod for euro nymphing.  After a quick lesson, Feef picked up the technique, but with no results at first.  In a quick attempt to show him how to lead his fly into a pocket, I hooked into a little brown trout that put up a fun fight. 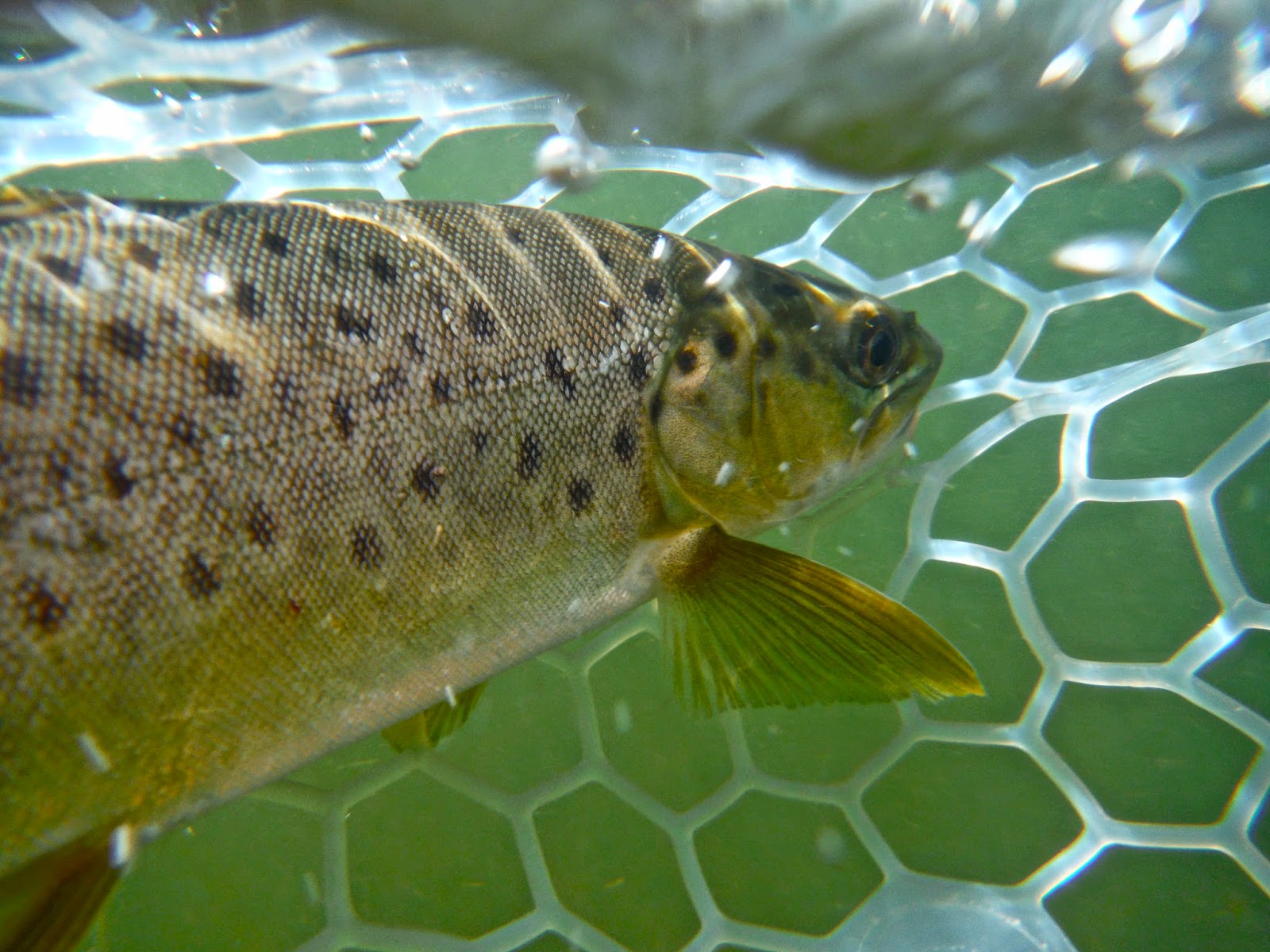 “I got one!” Feef yelled, as he brought his rod tip up.  The fish didn’t look big, but it was a fish.
“What is it?” I asked.
“It’s a damn white fish.” Feef said sadly, not wanting to count his white fish as a catch.
“It’s still a fish!” I said encouragingly, but before I could pull out my camera, he had flipped his net over and the white fish plopped back into the river. 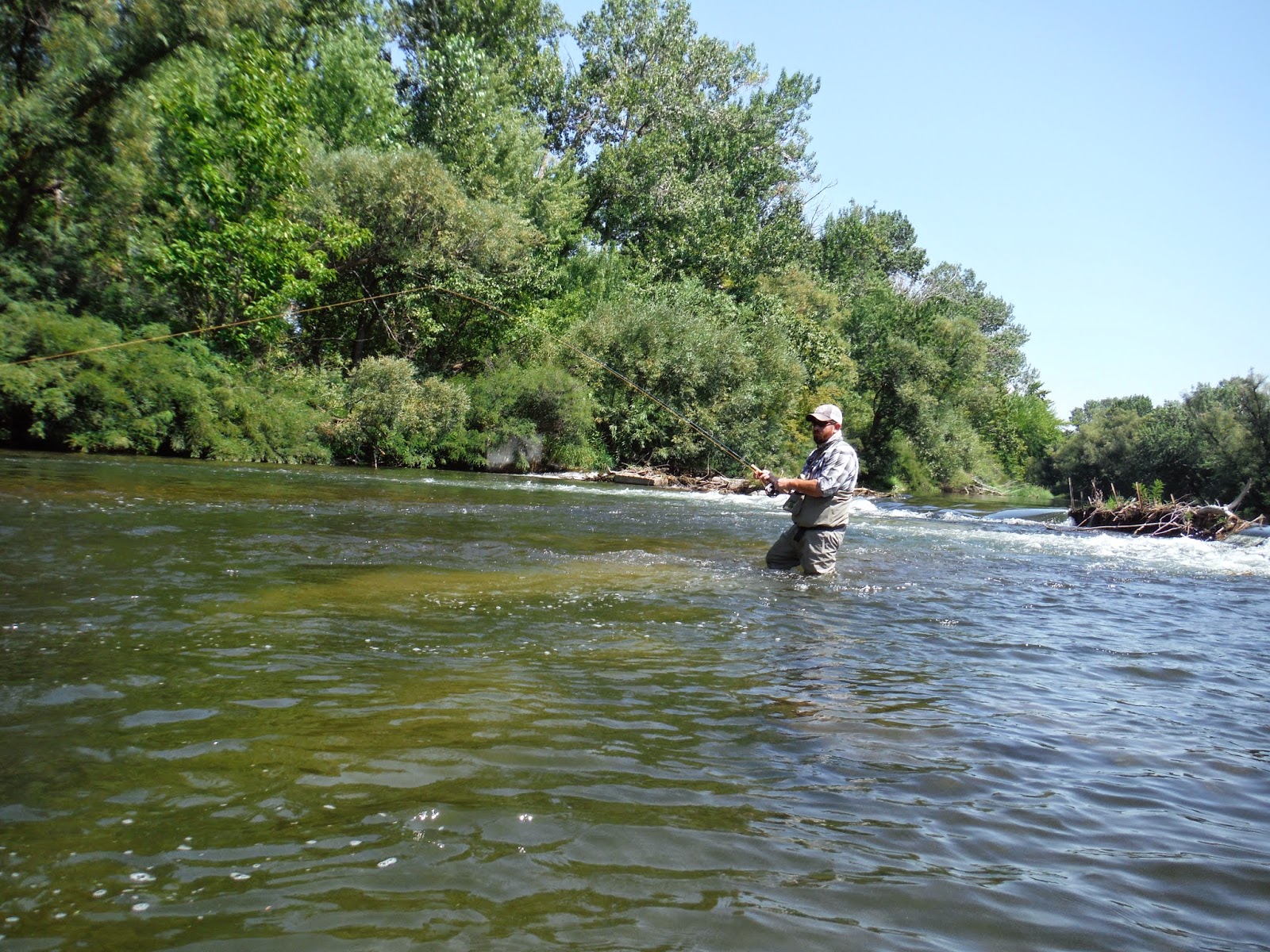 Time was running out for my brother, and we were now a ways from his truck.
“We better start heading back.” I suggested, as Feef continued fishing his streamer.  He had found a brown trout that would whack at his streamer every so often, and he didn’t want to leave it. My alarm went off, indicating it was time to head back.  I snoozed it to give us a little more time.  While he focused on the fish he was after, I started euro nymphing a small channel just downstream.  My euro flies sank quickly, and right as they fell into the deeper section of the channel, my slinky stretched out.  I set the hook fast!
“I got another one!” I yelled out as I fought the fish.
“Seriously?” Feef sighed, his face full of envy.
“Yep… And let me tell you, it feels good to be fighting a fish.” I said, as I grabbed my net and landed the fish.
“That’s messed up, Brother.” Feef said. 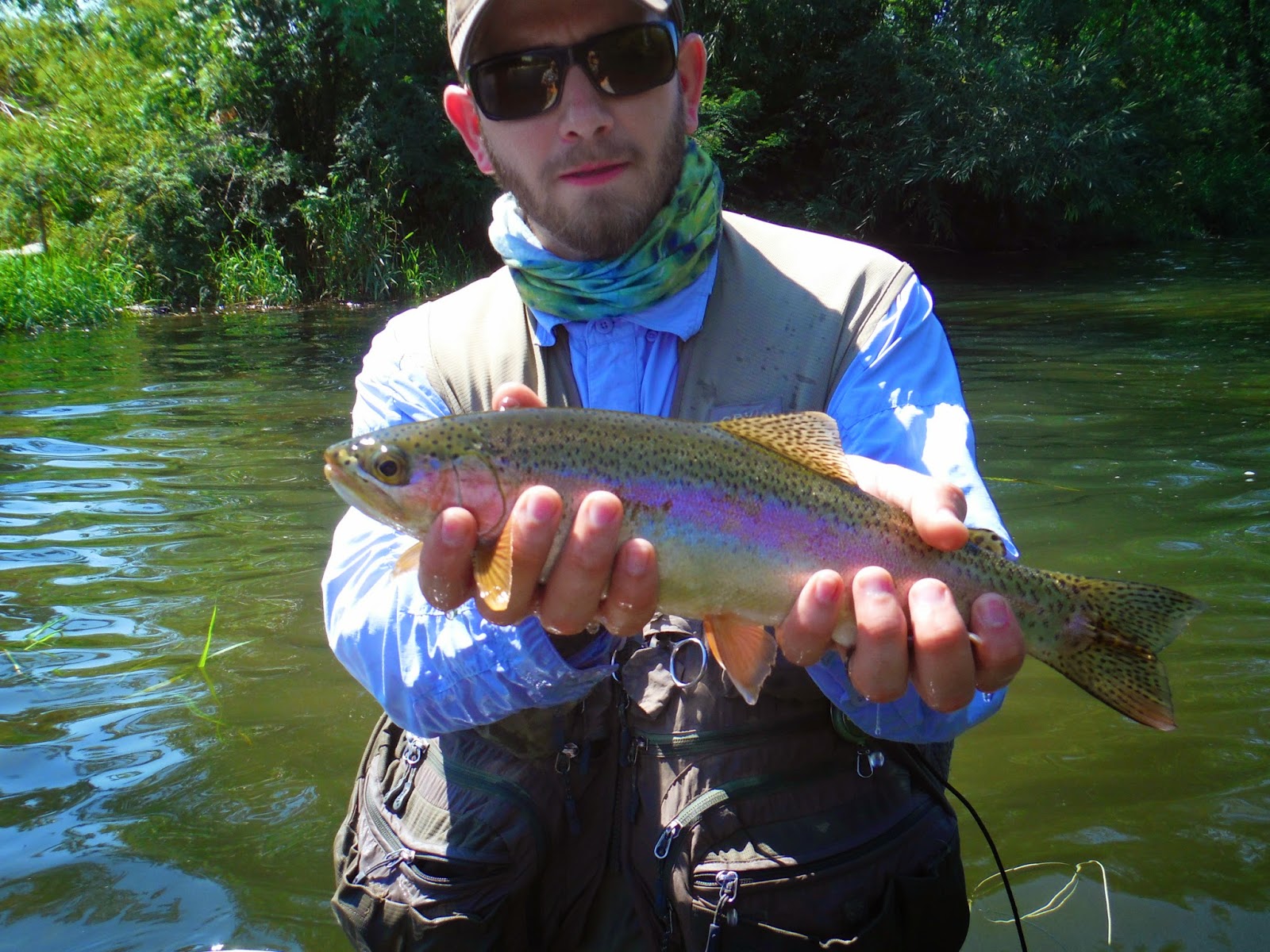 My alarm went off again, and this time we couldn’t ignore it.  We both got out of the water and clipped our flies off so we wouldn’t be tempted to make another cast.
“That damn fish wouldn’t take my fly.” Feef said, bitterly. “No fish for me today…”
“What are you talking about; you got that white fish!” I said, trying to lighten his mood.  Feef shot me a disgusted look of disapproval, knowing full well that I knew his white fish, to him, wasn’t a catch.
“Well look on the bright side, Brother. We know where that fish lives and you can come back and get it next time.”
“Yeah…” Feef said, still not satisfied but looking forward to some payback.

5 thoughts on “The Boise River and My Brother”