Skip to content
﻿
The Boise Valley Fly Fisher’s (BVFF) organization  hosts a fly fishing event every month, and this month’s extravaganza was hosted by yours truly.  I have always wanted to go on an alpine lake hike with the club, because it is the best way to meet new people in the fly fishing community. A quick phone call to ask McCall’s alpine lake aficionado, Mike McLean, if he could help out on the outing would seal the deal.  Mike agreed to help and lead everyone up the trail on the day of the event.
﻿ 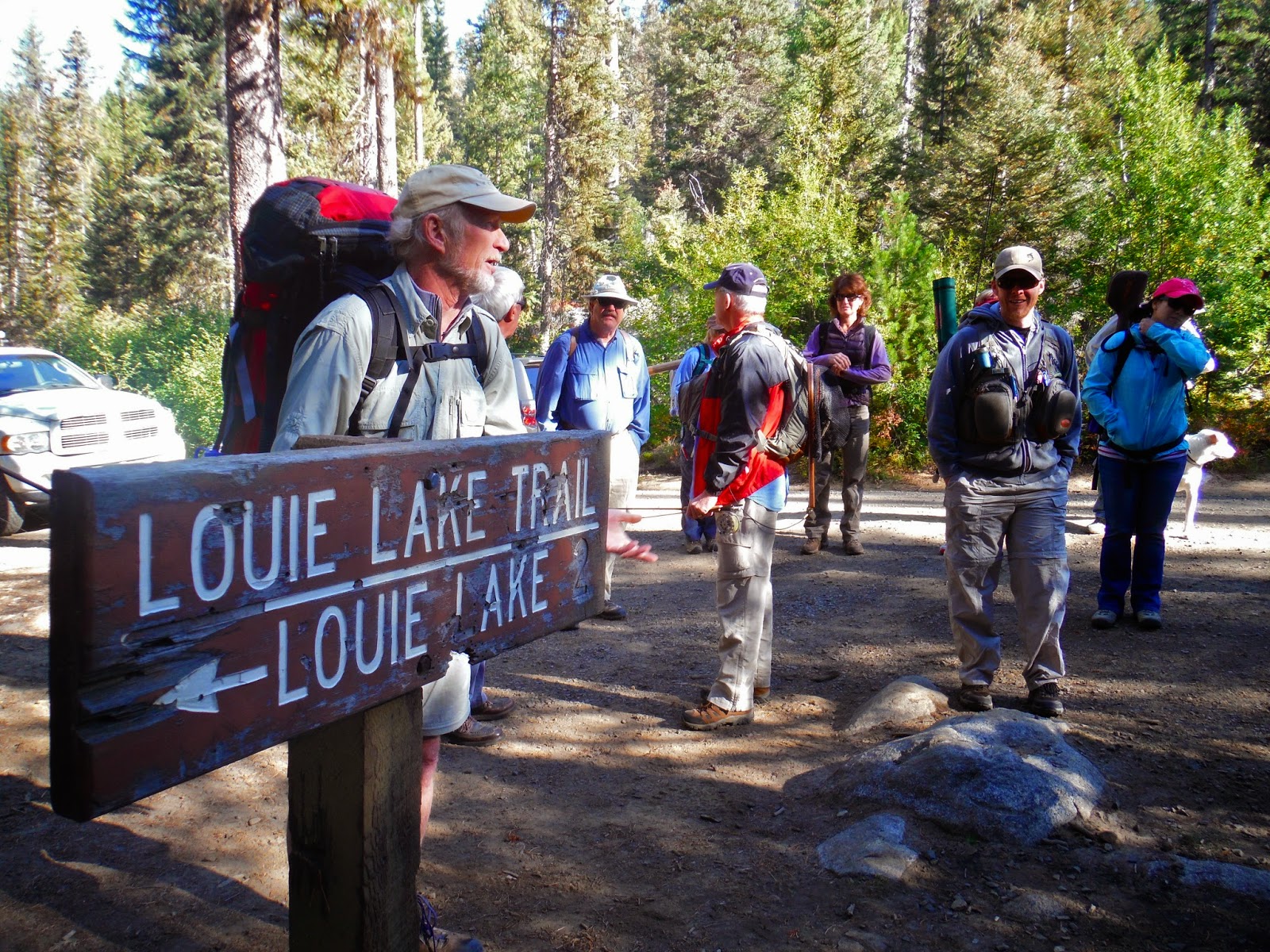 There were fourteen of us all together, with some never having walked up to an alpine lake before. Tom, a member of BVFF, was no rookie when it came to alpine lakes. His light-weight float tube fit nicely on his back, which ended up working out to his benefit on the water.  ﻿ 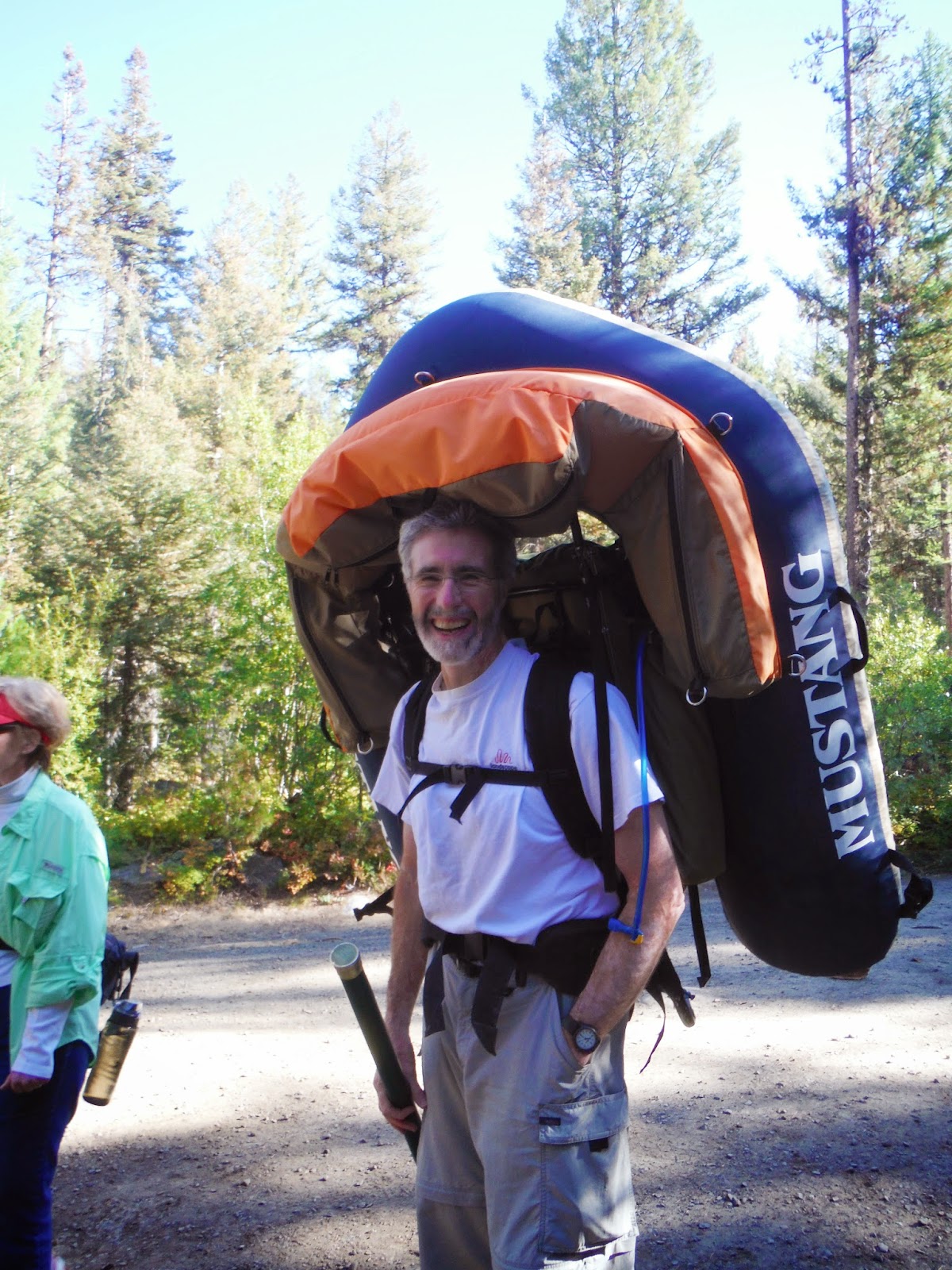 The first obstacle on the path was a small bridge made of tied-up deadfall.  I stood aside with my camera ready just in case someone fell in… sadly, no one did. ﻿ 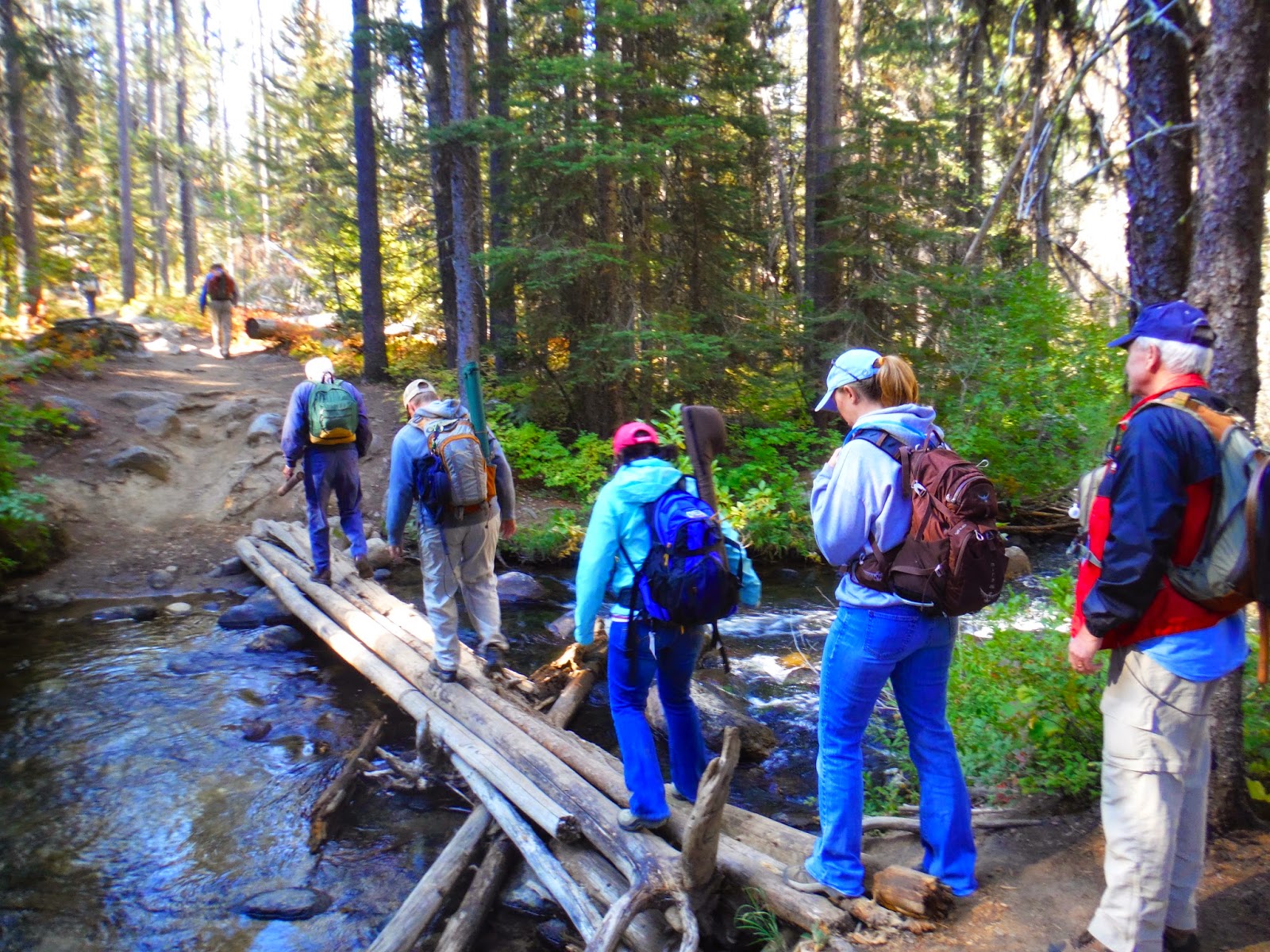 The fall is a great time to walk up to an alpine lake.  The leaves are turning colors and there are little to no biting bugs this time of year.  ﻿
﻿ 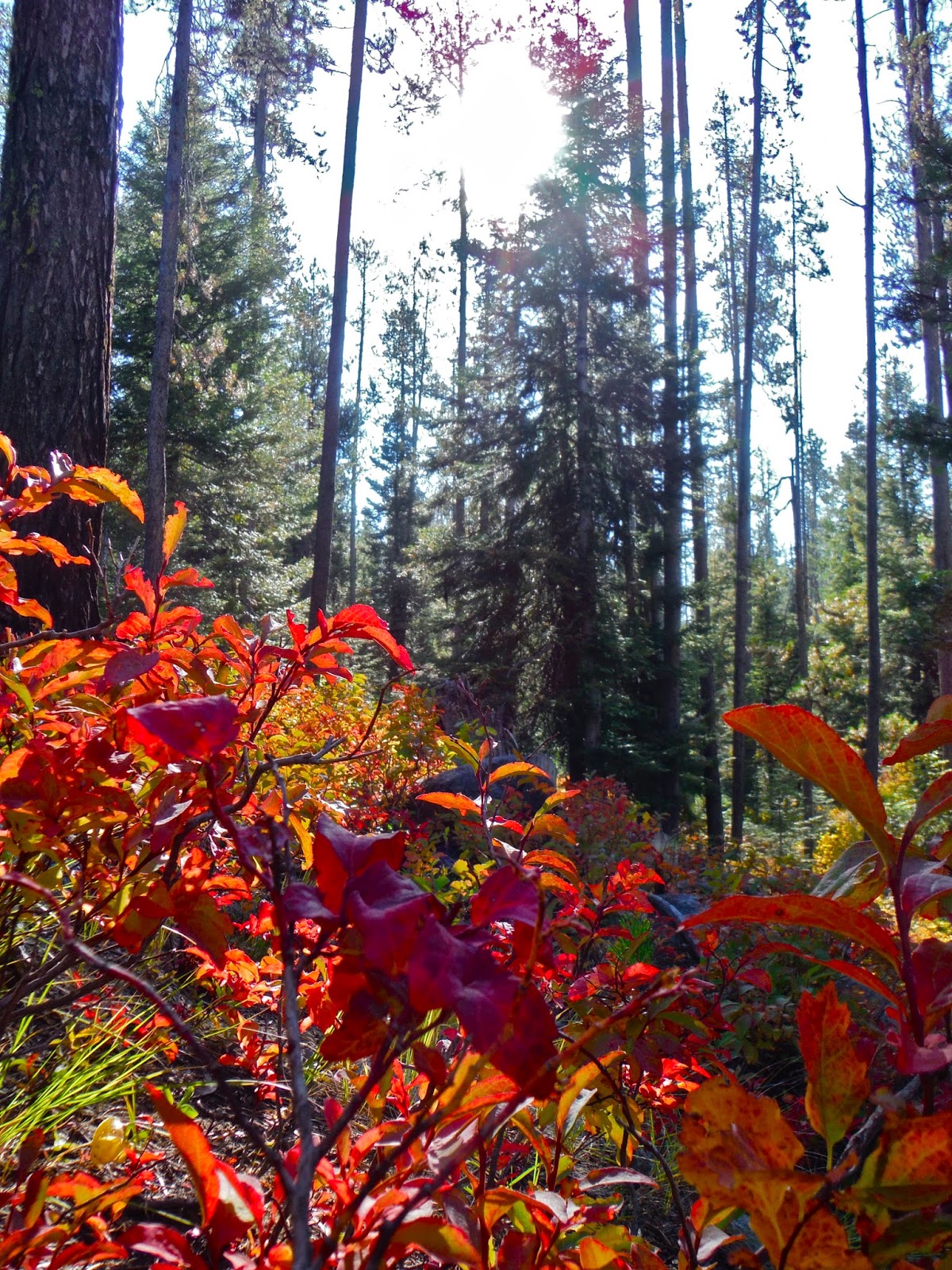 The Louie Lake hike is considered a moderate hike, due to the distance and the steep hills on the way. I, however, had lied and told members that his would be an easy hike, no longer than a mile and a half.  I figured if I told the truth, less people would show up.  One gentleman I came across called me out after a mile uphill, stating, “Erik, we need to have a talk about what you would call easy.” Despite the slight miscommunication, the view of the lake, paired with the smell of fresh water and evergreens, made the hike worth it. 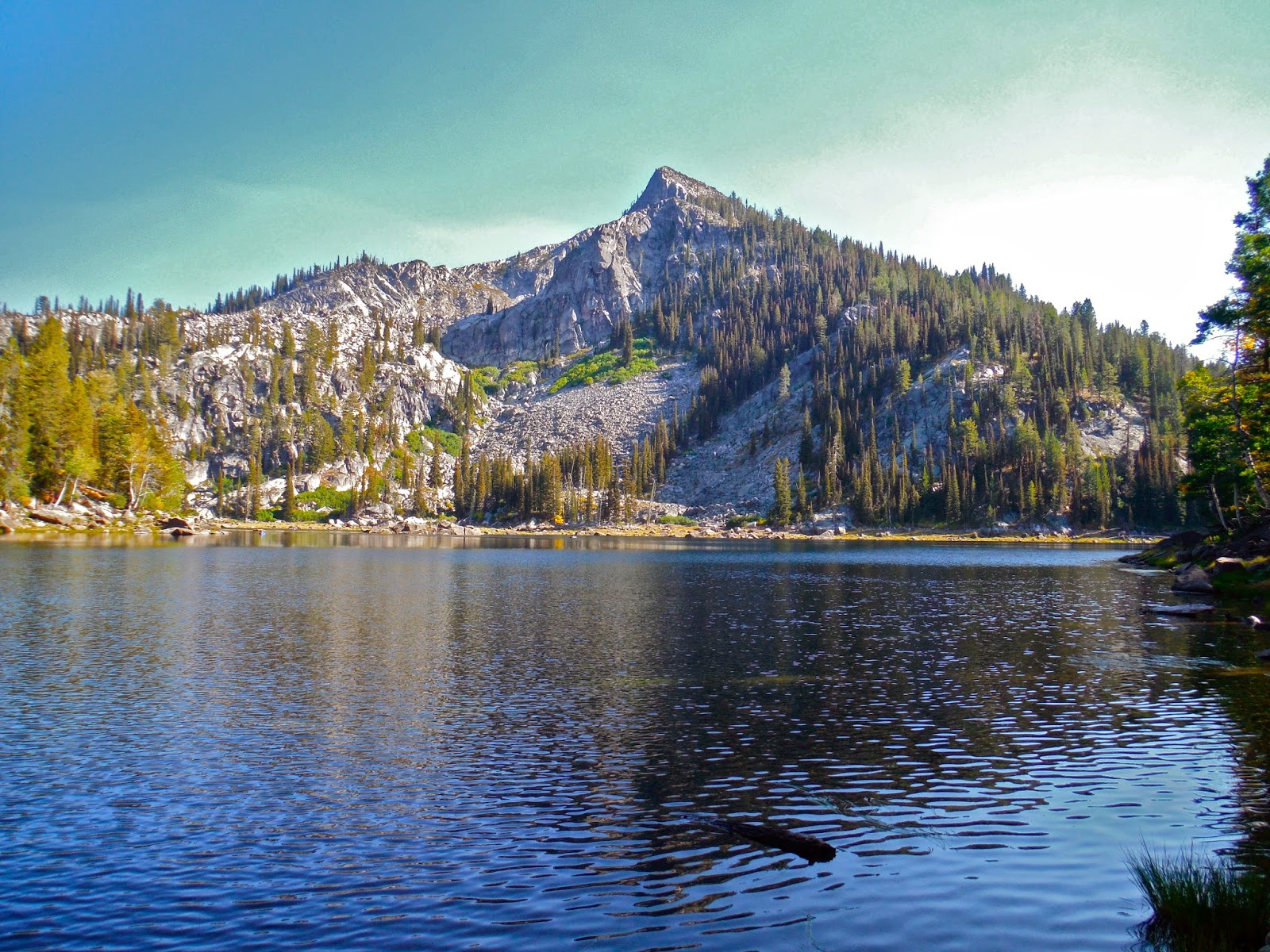 While everyone headed left on the bank of Louie Lake, I headed right to selfishly fish my favorite section of the lake… alone.  Laughter echoed across the lake as members of the club put their gear together. A part of me wished I was over there to enjoy the conversation, then a fish rose. Like a cat watching a laser beam, I watched the fish as it swam the shore.  My fly of choice was a pico ant, which I sent flying out to the fish.  Without delay, the fish came up and ate it!
﻿ 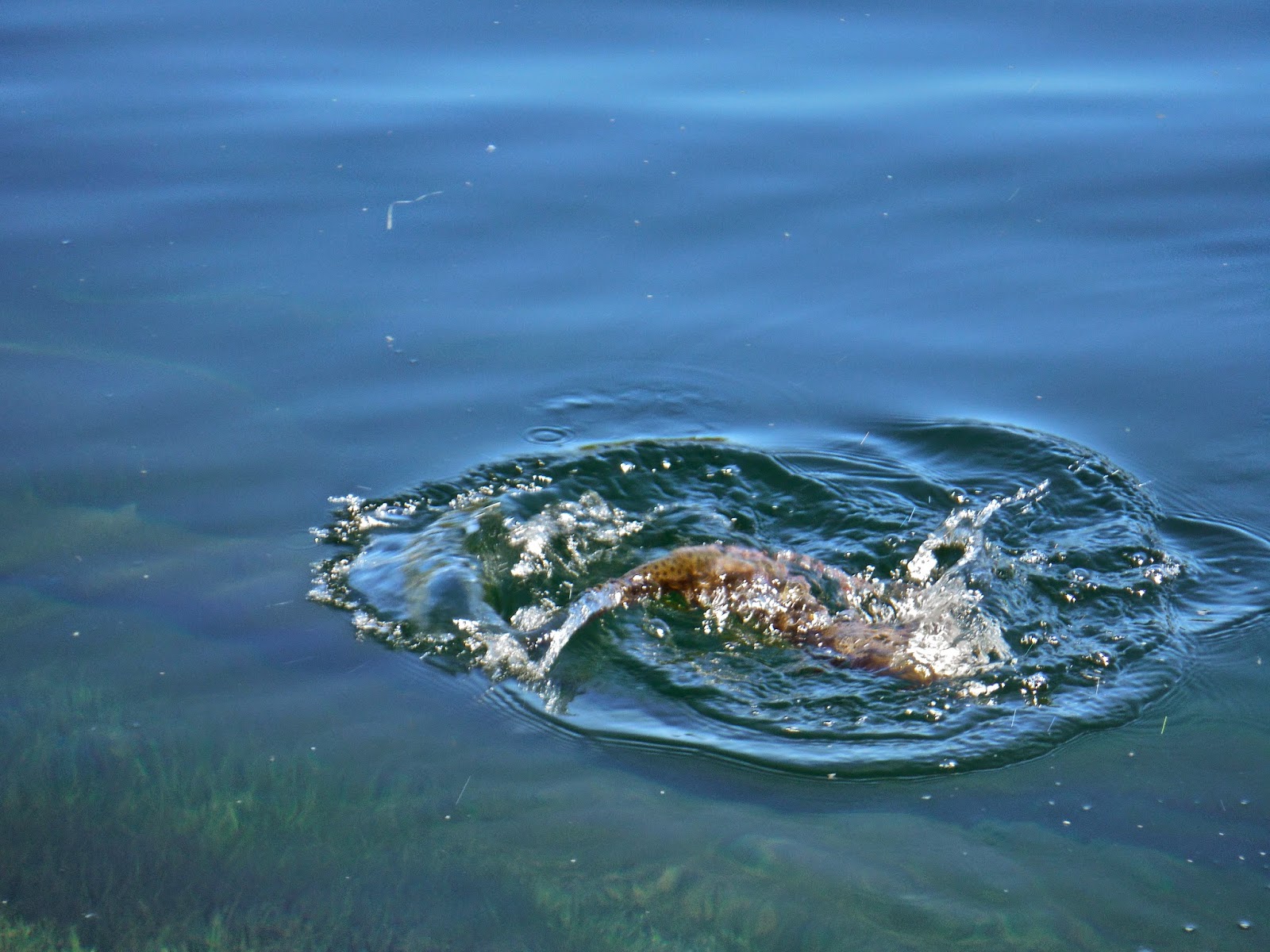 Judging by the bronze flashes as the fish fought, I had a cutthroat trout on.  I brought in the fish and as it got within arms length it spit the hook.  The fish sat leisurely as I scrambled to grab my camera.  I was able to get a shot of it as it casually swam back into the lake.﻿ 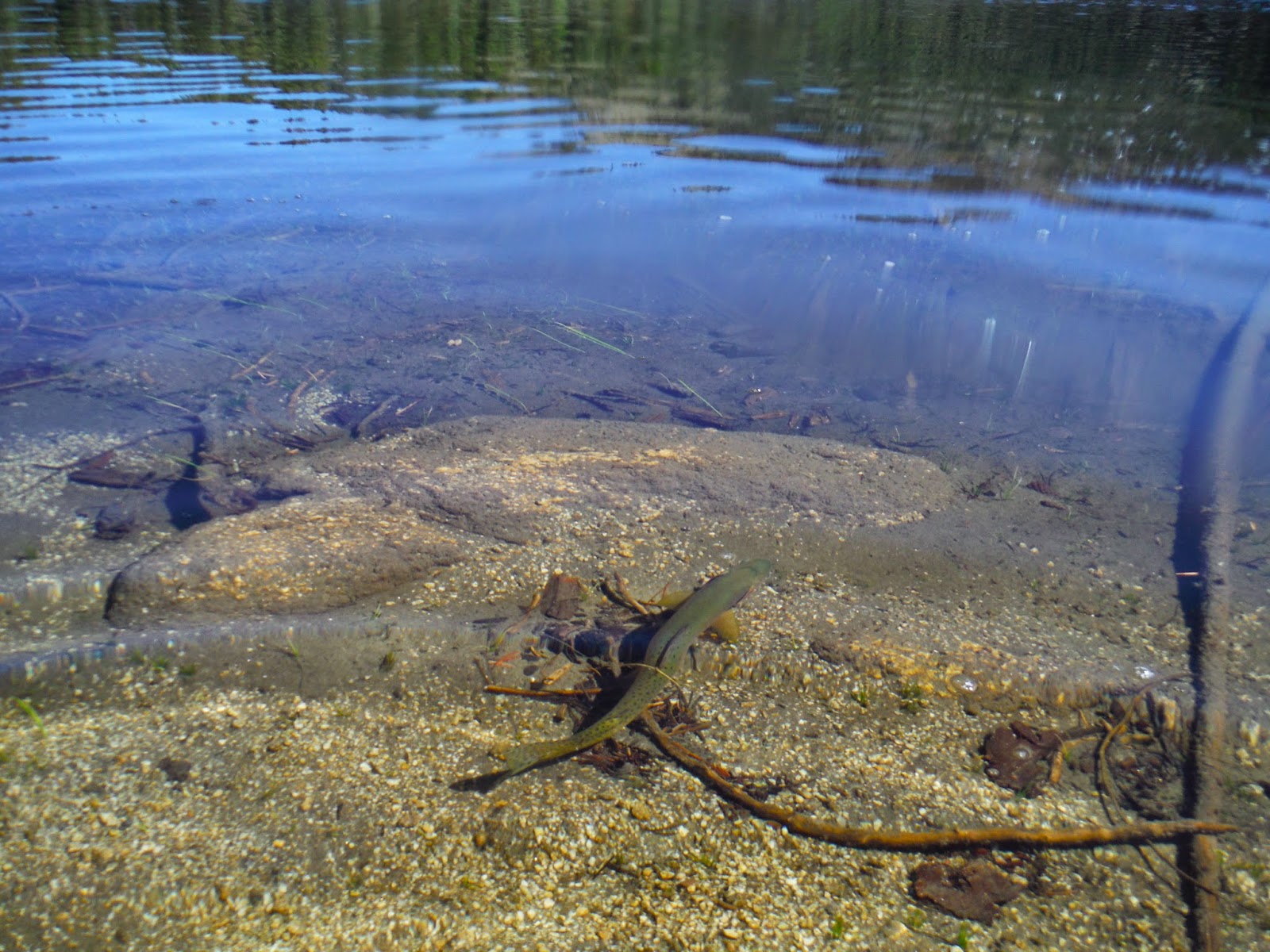 The pico ant seemed to be the fly to have.  Another choosy fish was coming up to eat on the surface, and it took me a while to figure out its feeding pattern.  Once I felt confident enough to predict where it was going to surface next, I laid out my fly.
“Come on, fish.” I whispered to myself, and a moment later it smacked my pico ant!
“HA!” I yelled, setting the hook and bringing in a nice, shiny cutthroat. 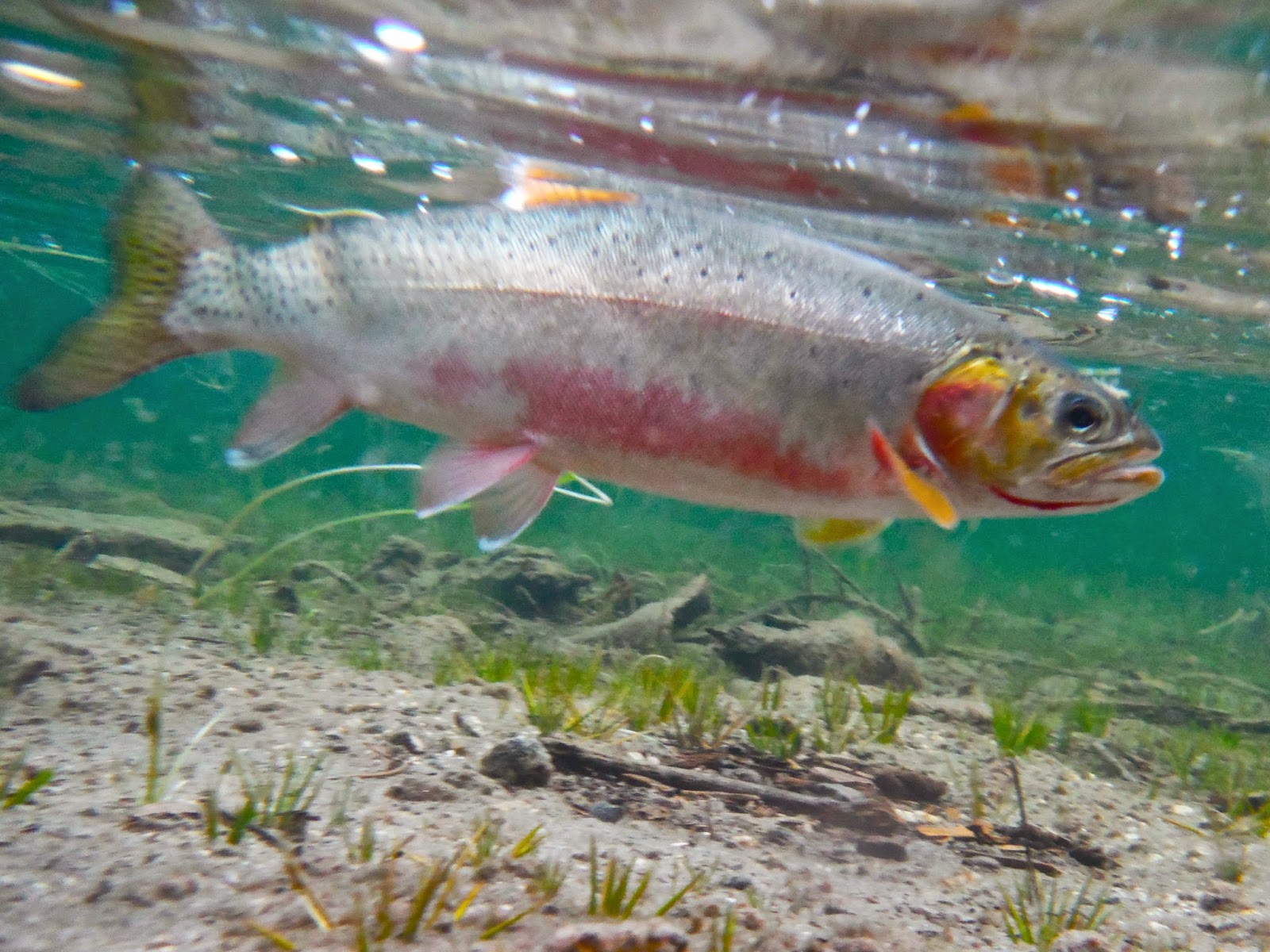 My fish hadn’t even bolted away before I found my next target. The new fish’s gulping pattern was moving further and further away from me out into the lake.  It was too far to cast by the time I had got into a good casting position and, as if the fish knew, it stopped rising as soon as I was ready to cast.  With nothing to aim for, I decided to try my luck, and cast out my fly.  The pico ant sat on the water for a long time, untouched. I gave it a few twitches, and a fish came up and nailed it.  Whether or not it was the same fish I had casted to a moment ago didn’t matter; after all, it was still a fish. 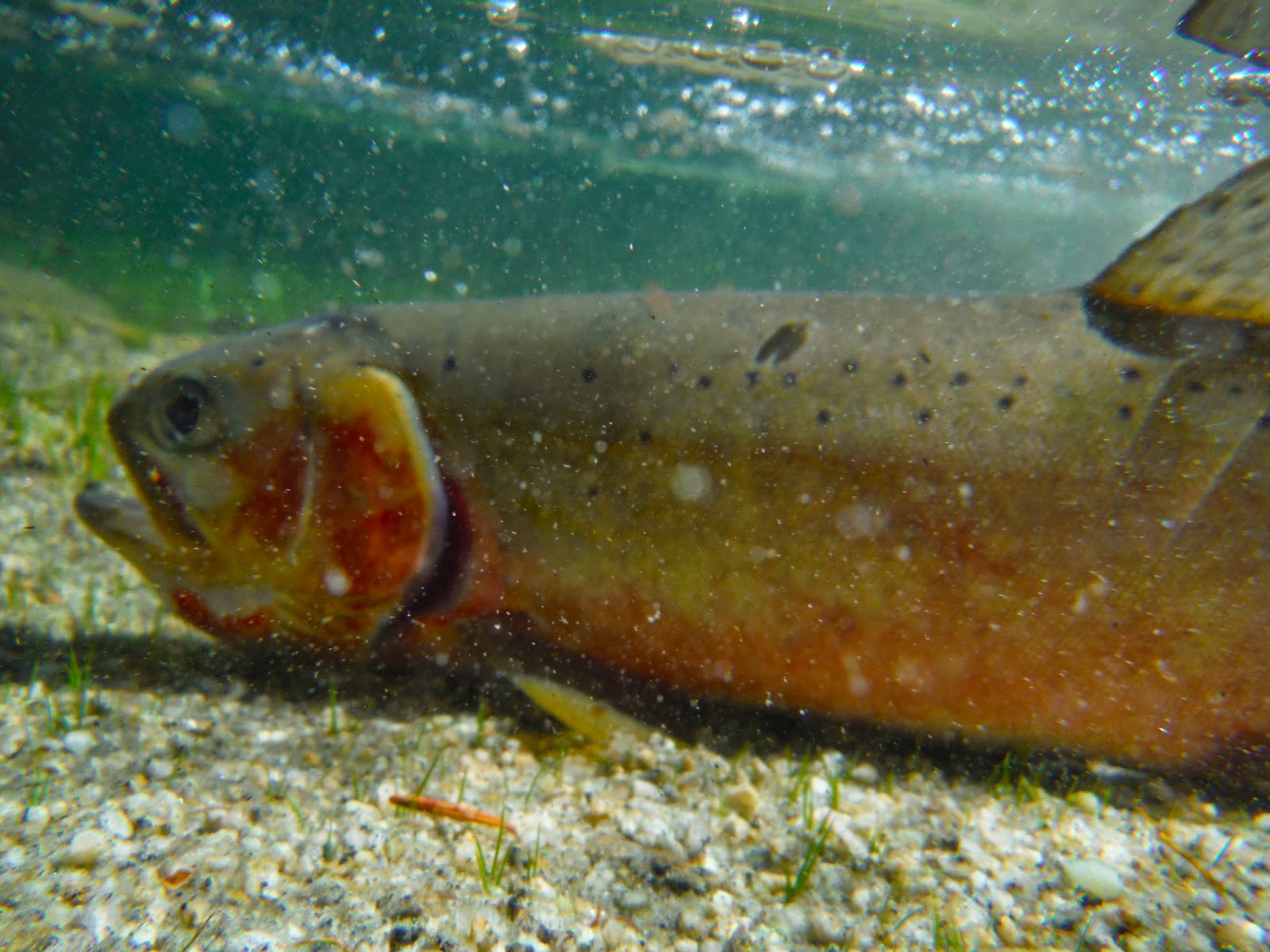 The fish darted away, and I couldn’t help but chuckle as I looked up: there were three float tubes on the water, and a bank full of club members rock hopping along the bank and casting to fish.  I couldn’t help feel a little bad for the other anglers that made the hike up to avoid people.  The thought of spotting the fourteen of us walking over the ridge, into sight, made me chuckle. ﻿ 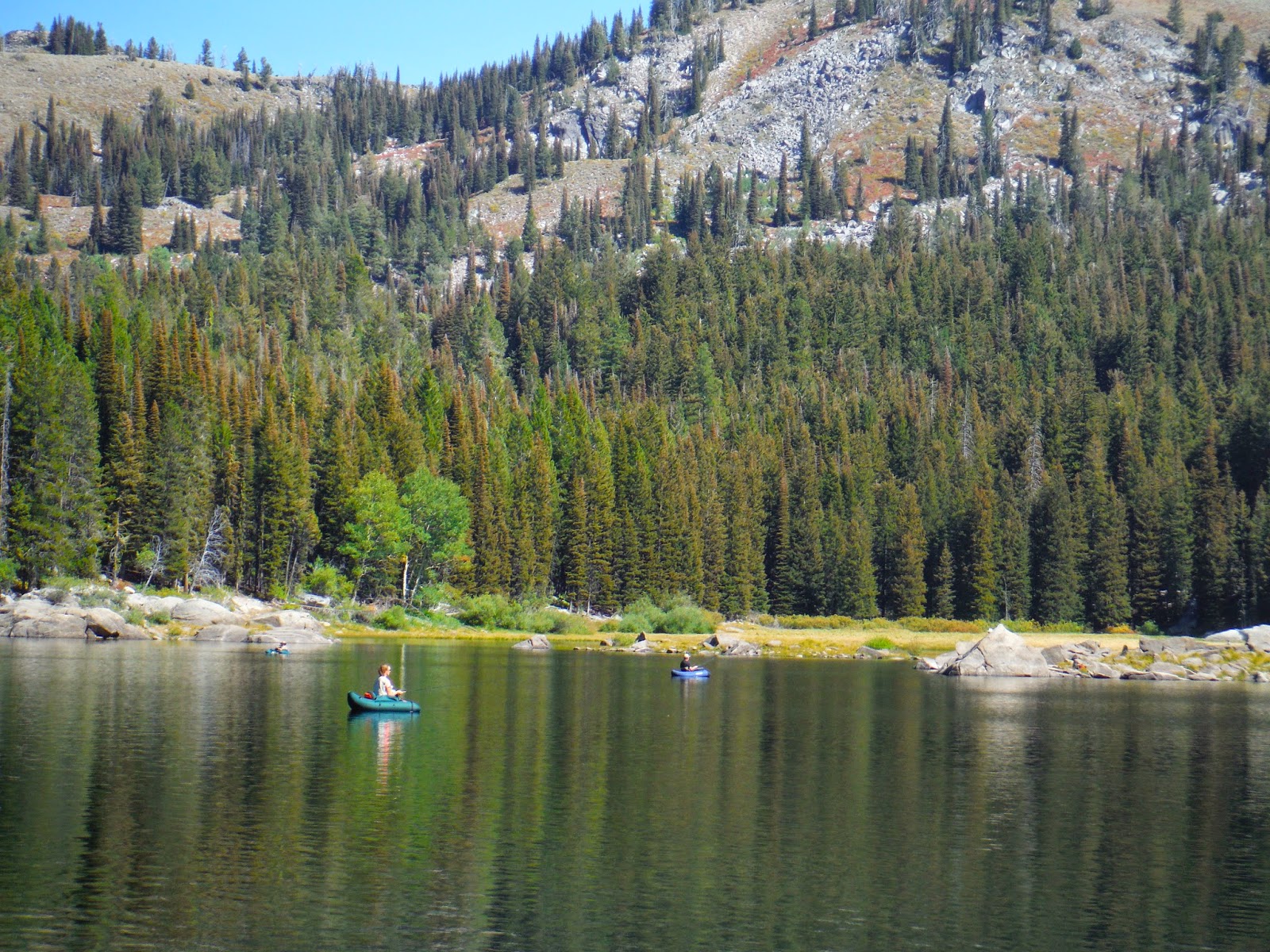 Half the day was over, and I could see others who had the same idea as me: to walk the entire lake.  The fish at my section of the lake were starting to wizen up and refuse my fly at the last second.  However, if I continued to fish for them, they would eventually take. 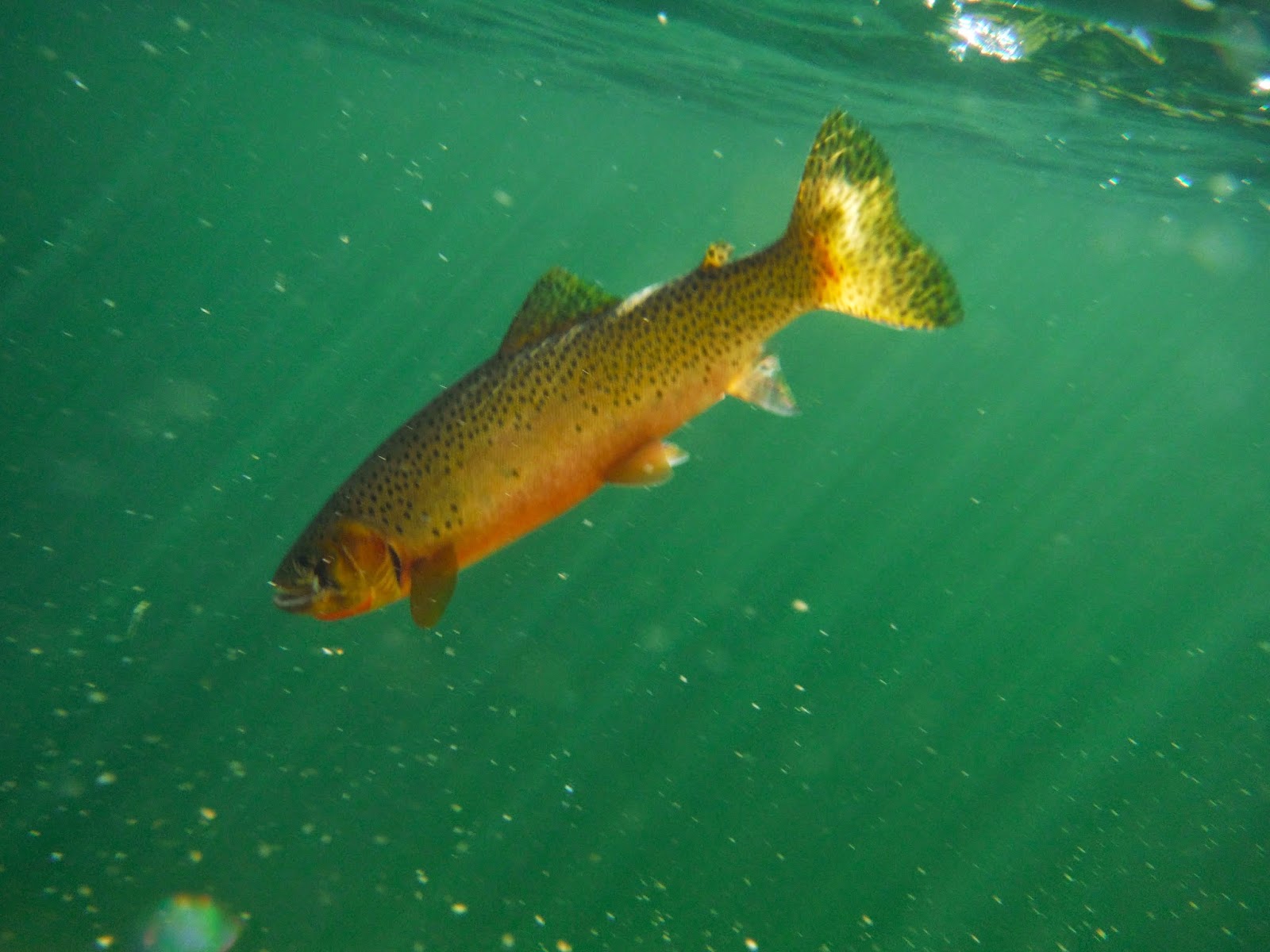 Two other members of VBFF, Tom and Erin Labrecque, were within ear shot of me now, and my wife Gracy was not far behind. I walked over to meet them and found that Kiwi was the most excited to see me. 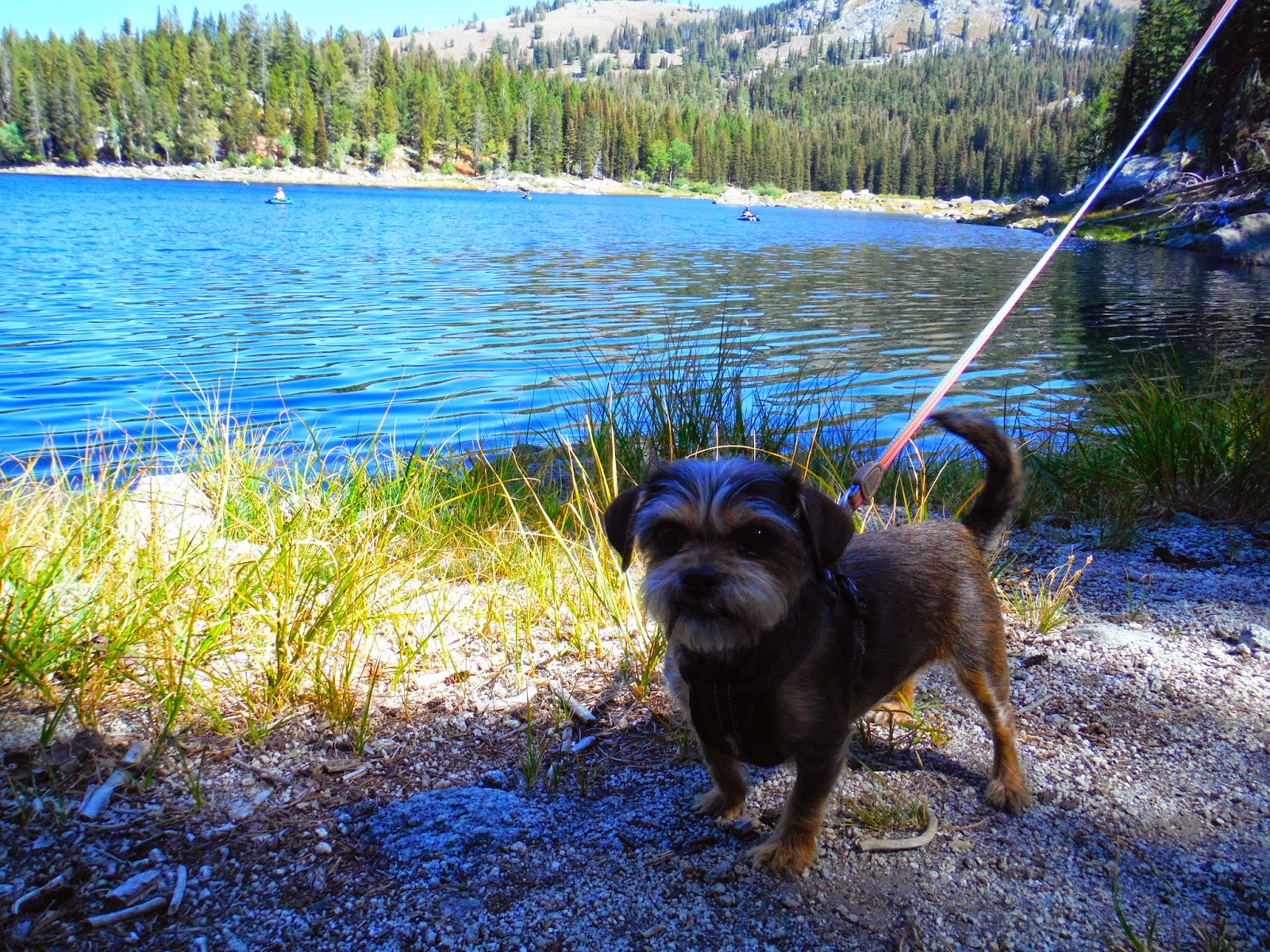 Both Tom and Erin were fishing as they walked over.
“I got one!” Tom yelled, as his rod bent with every tug of the fish. He called for his wife, Erin, to come and take a picture, but Erin was fishing and didn’t want to stop.  Tom had brought in his fish, and in the time he was fighting it, I had bolted over to get a picture. 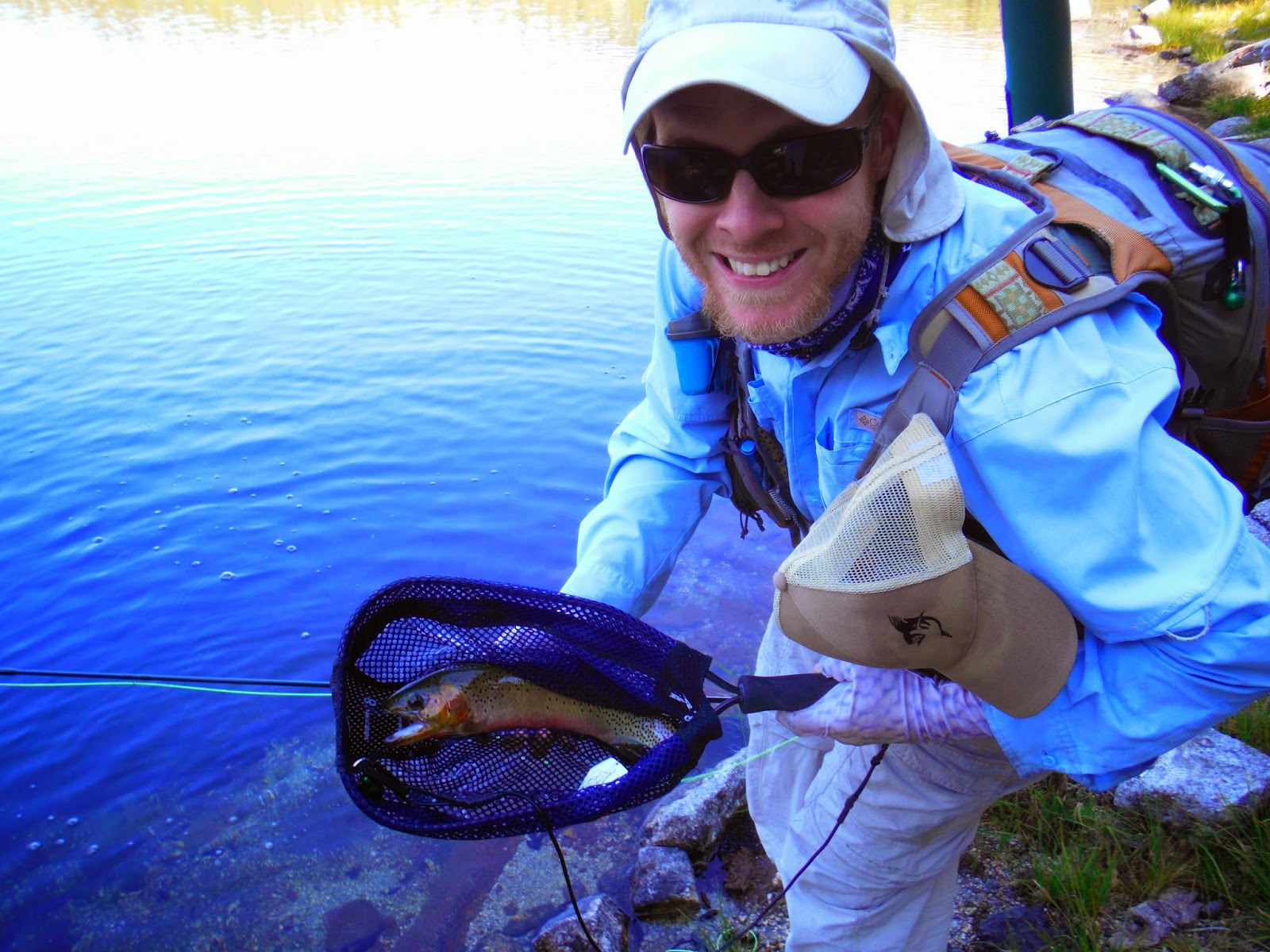 “It’s about time you made it over here.” I said, “But you are too late, I have already caught all the fish.”  Both Tom and Erin smiled, then Tom said, “Oh, Erik… you are still as modest as I remember.” Erin had yet to hook into a fish, so I grabbed her leader and tied on a Pico ant.
“There you go, no excuses now.” I said.
“There, do you see it?” I said quickly, pointing out a fish.
“Yeah!” Erin said back, and I quickly got out of the way so she could cast. The fish refused her fly the first time, but then came back and ate it.
“Fish on!” Erin yelled. I was quickly there with the camera.
“Look at that stance!” I said, and took a picture of Erin bringing in her fish.﻿ 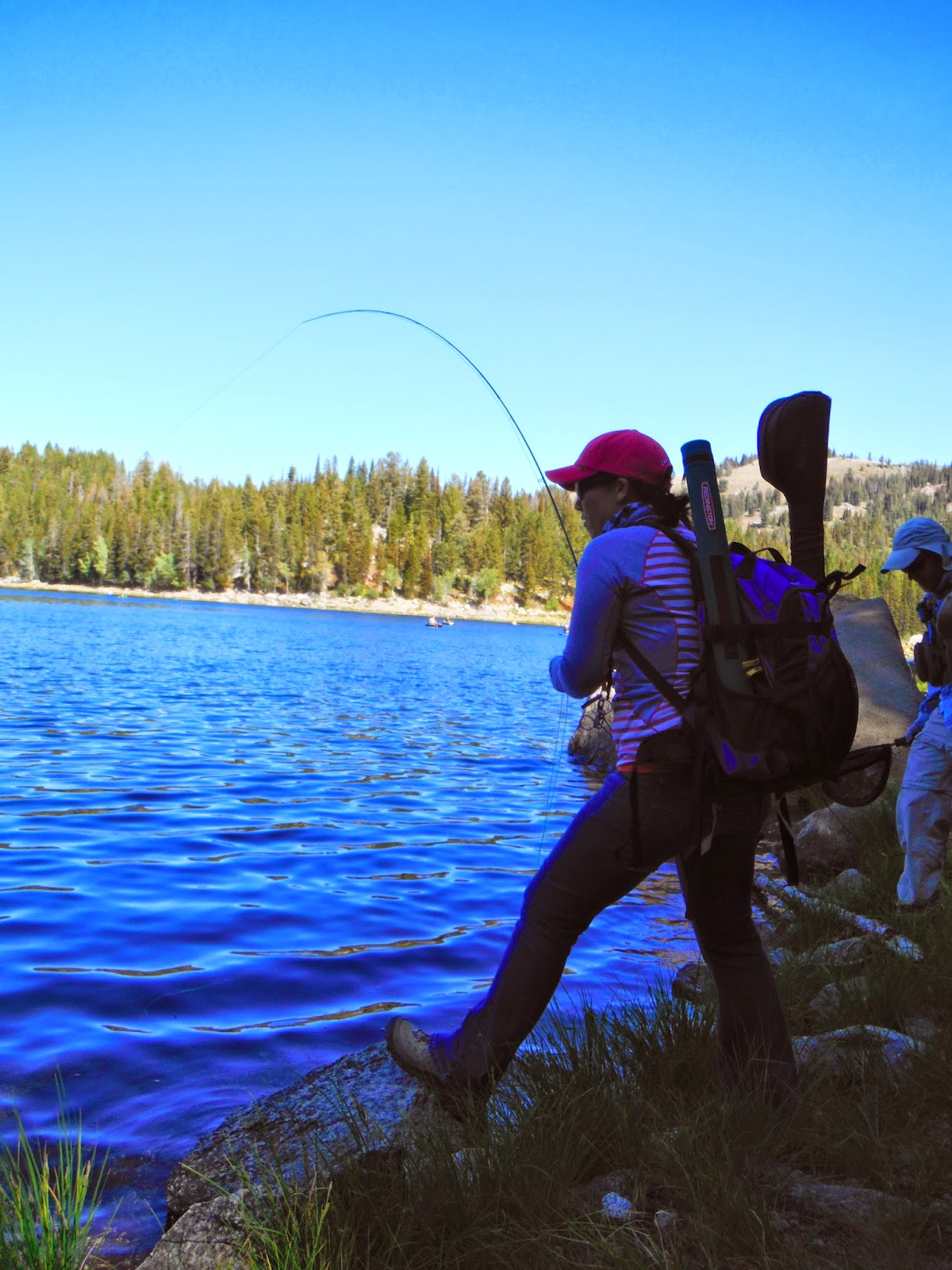 She brought a cutthroat trout into the net, but before we could get a hero shot the fish flopped out and back into the water.
“Well, at least you can say you got a fish today.” I said, before we continued to walk the banks of the lake.  I met up with my wife, and as we sat a fish rose.  She had her fishing license, but was not interested in fishing for the rising trout.  I did offer it to her first before I got up to make a cast.
“Sit here, Woman, and watch year man catch a fish.” I said, in my best hillbilly voice. She shot me an dissatisfied look, as I smiled back at her, then caught a fish. ﻿ 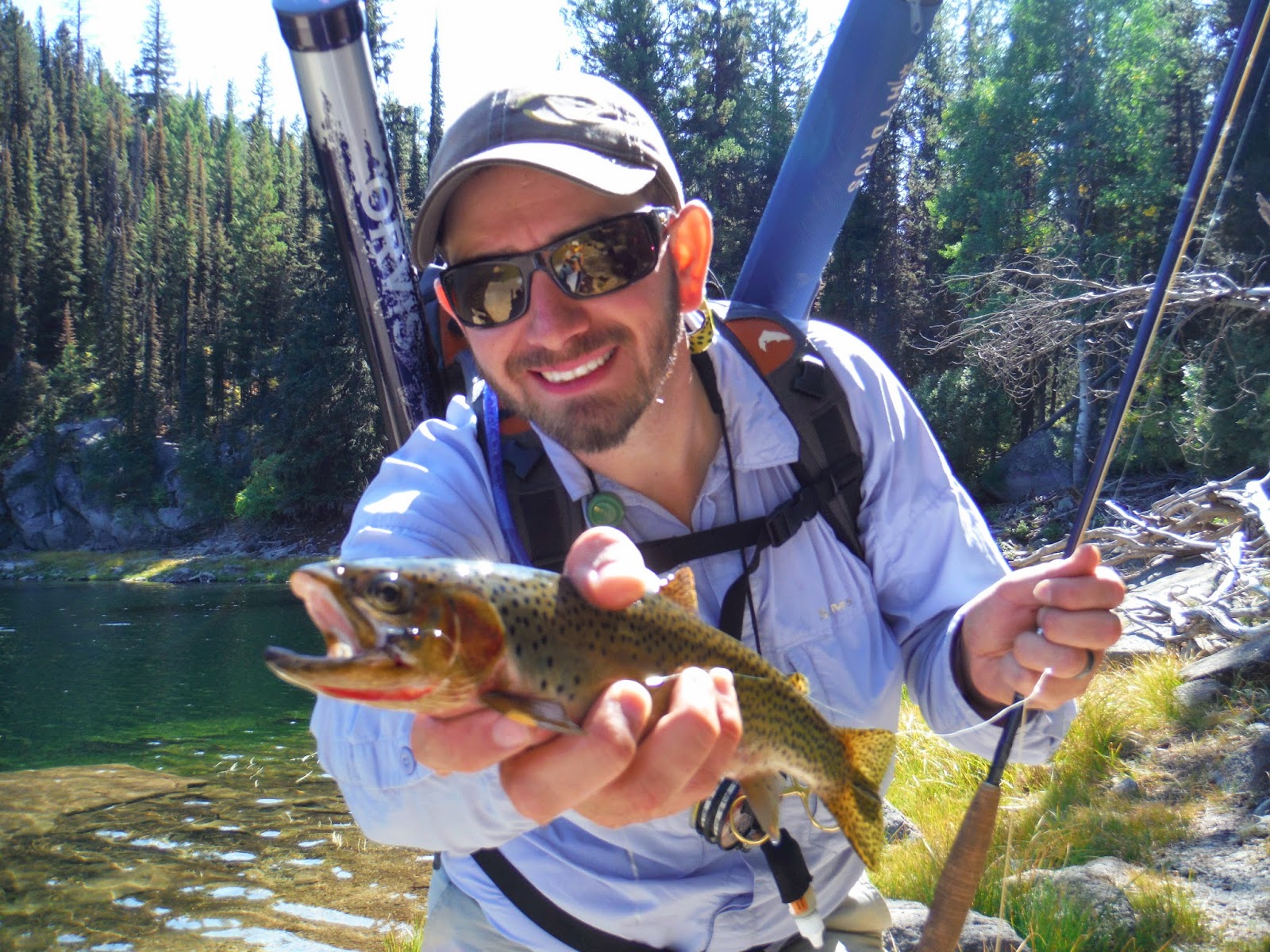 I thought I had spotted long time BVFF member and good friend, Larry Donahue, from across the lake.  I quickly made my way over, where he was perched on a large rock, to fish with him. 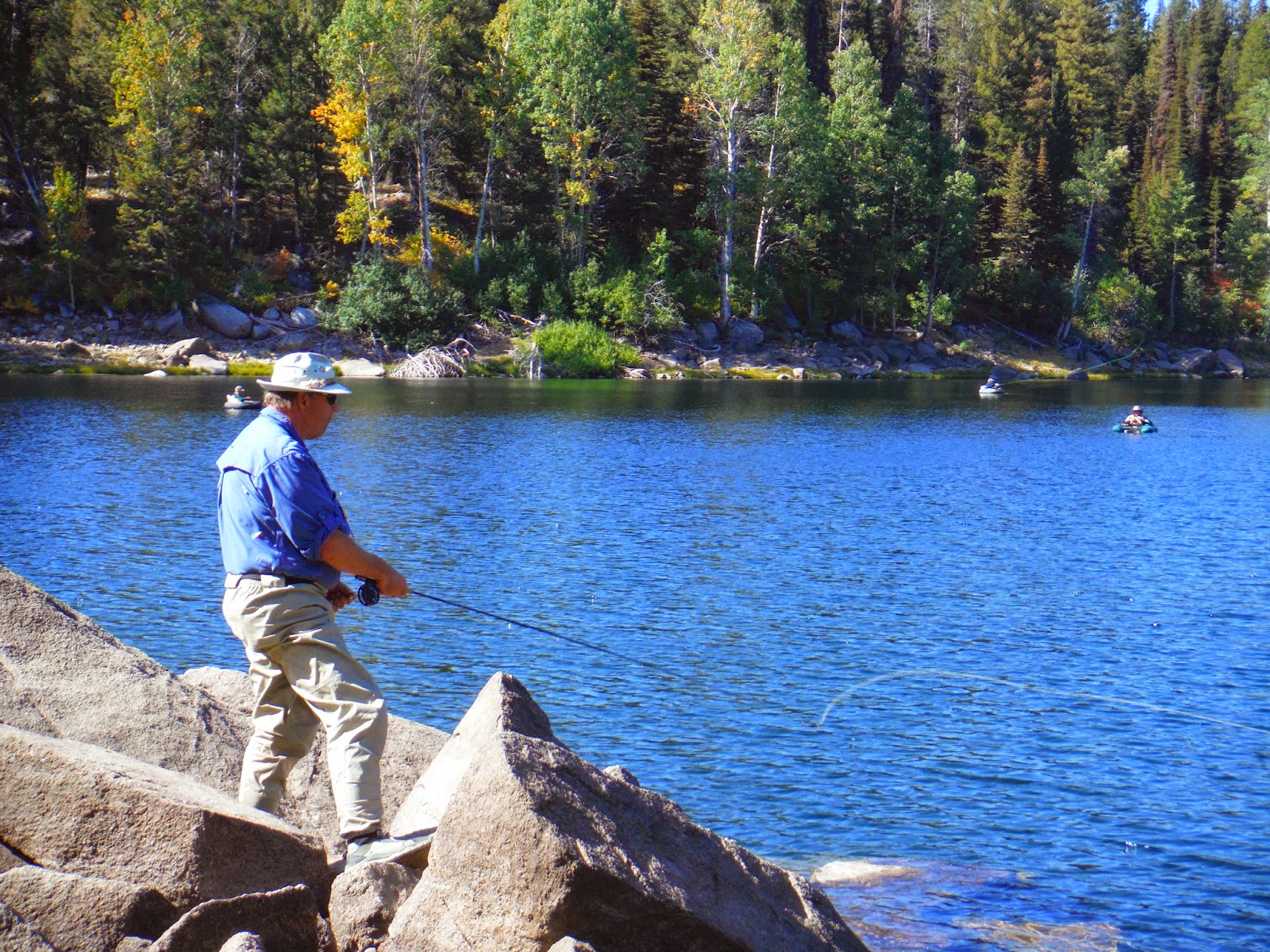 I don’t get to fish with Larry very often, so I was sure to make the effort to find him.  I discovered that this was Larry’s first time to Louie Lake, which made me happy I committed to hosting the outing.
It was getting late, and we all had to get going if we wanted to get back to Boise at a decent hour.  I did catch one more fish as I quickly walked back to meet with the rest of the members. 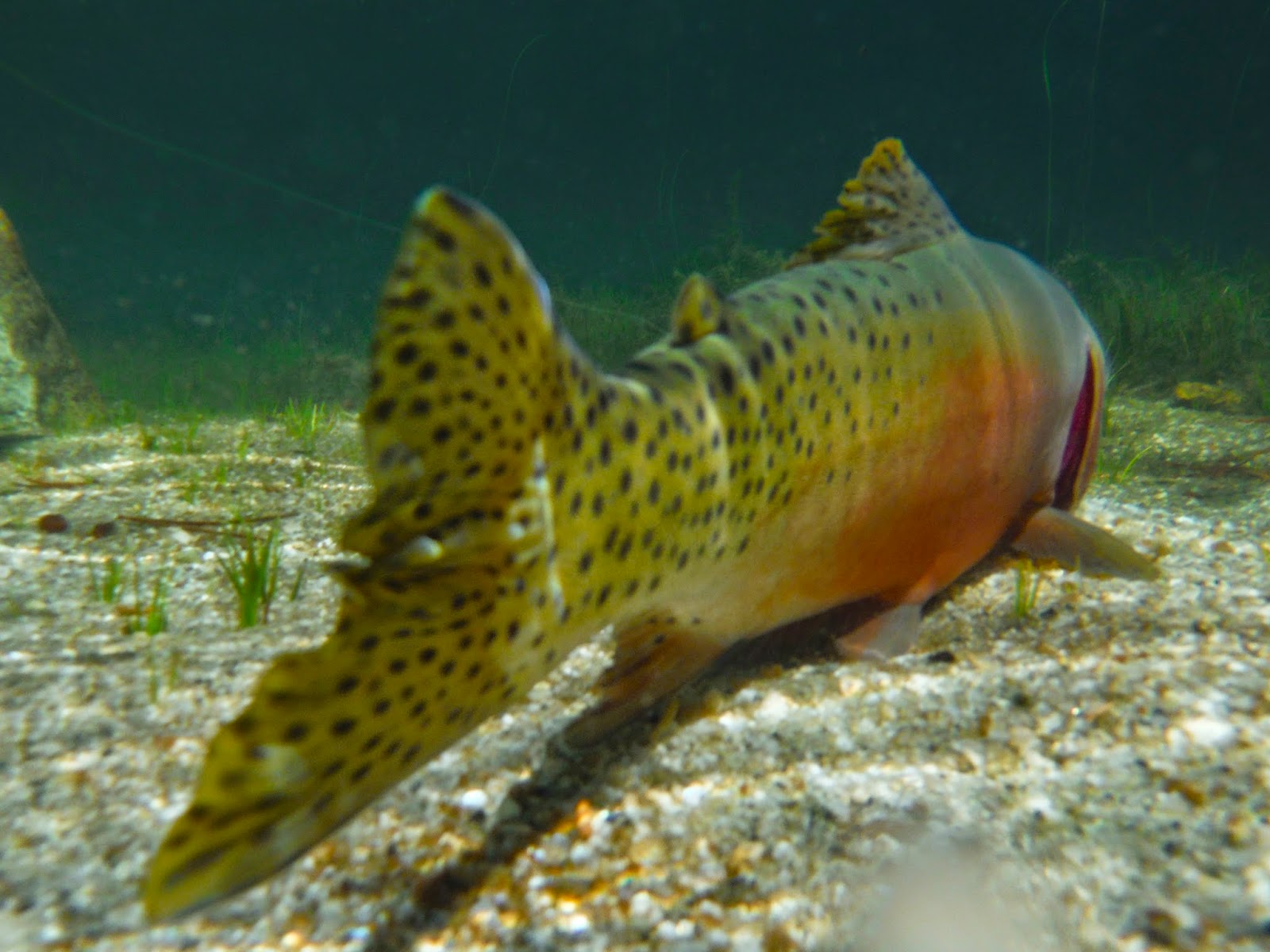 Our group of 14 whittled down to 7 as the day went on, and together Gracy got a shot of the members who stuck it out to the bitter end. 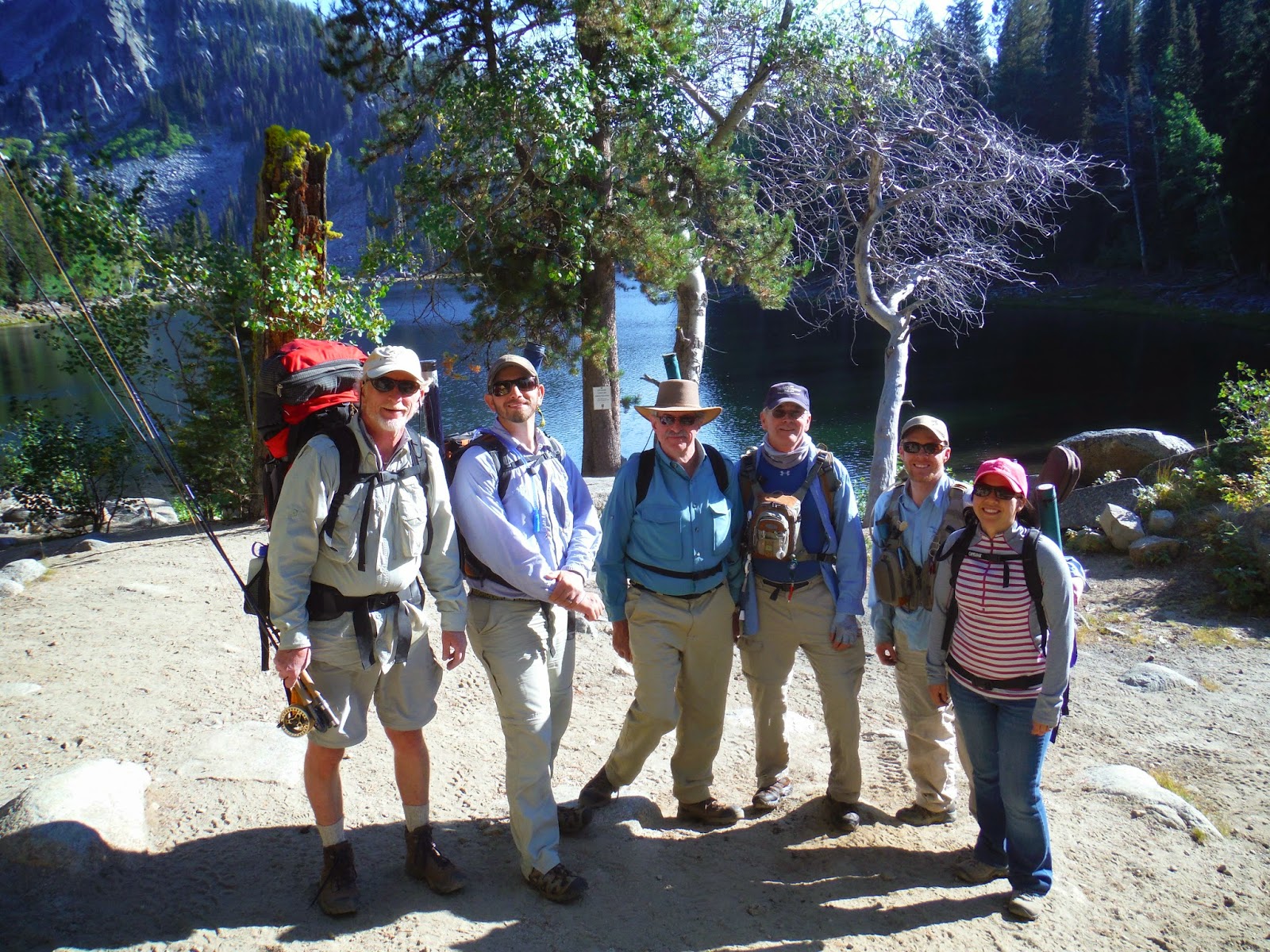 I was asked if I was going to host another alpine lake trip for next year by some members who couldn’t make this trip.  With Mike McLean as our leader, I believe another trip will be in our future, I assured.  Until next year…