Skip to content
As luck would have it, the South Fork of the Boise was flowing at 600 CFS when my brother Kris, aka Feef, came to town. At those flows, the river can offer up some of its best dry fly fishing opportunities. 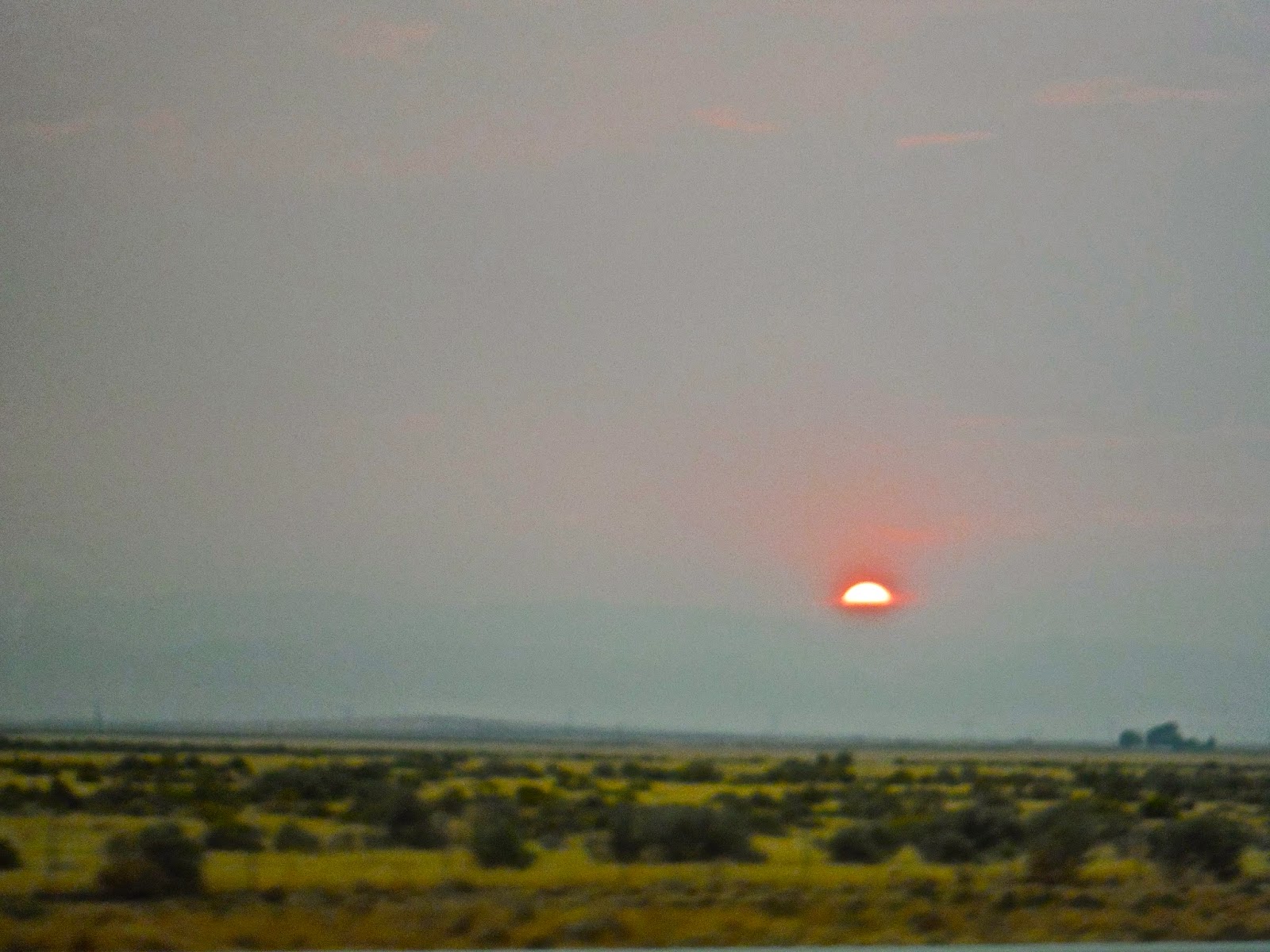 “Oh, this is going to be a gooood day, Brother!” Feef said, charged at the first sight of the river. “I’m going to catch all my fish on a streamer today!” He announced, as we scoped out the river. We both geared up quickly, and I took the lead walking through the brush.
“Hold on!” Feef called out, as he turned back to get his line untangled from a low branch. I let out a very loud and heavy sigh as Feef continued to fight with the branch.
“Get! Off! There!” Feef yelled at the fly line, giving a tug with every syllable.
“I’m just going to leave you here…” I said, snob-ishly.  Feef started laughing as he fought harder to free his fly line. I brought out my camera to snap a picture, but right then his line came free and he quickly turned and posed. 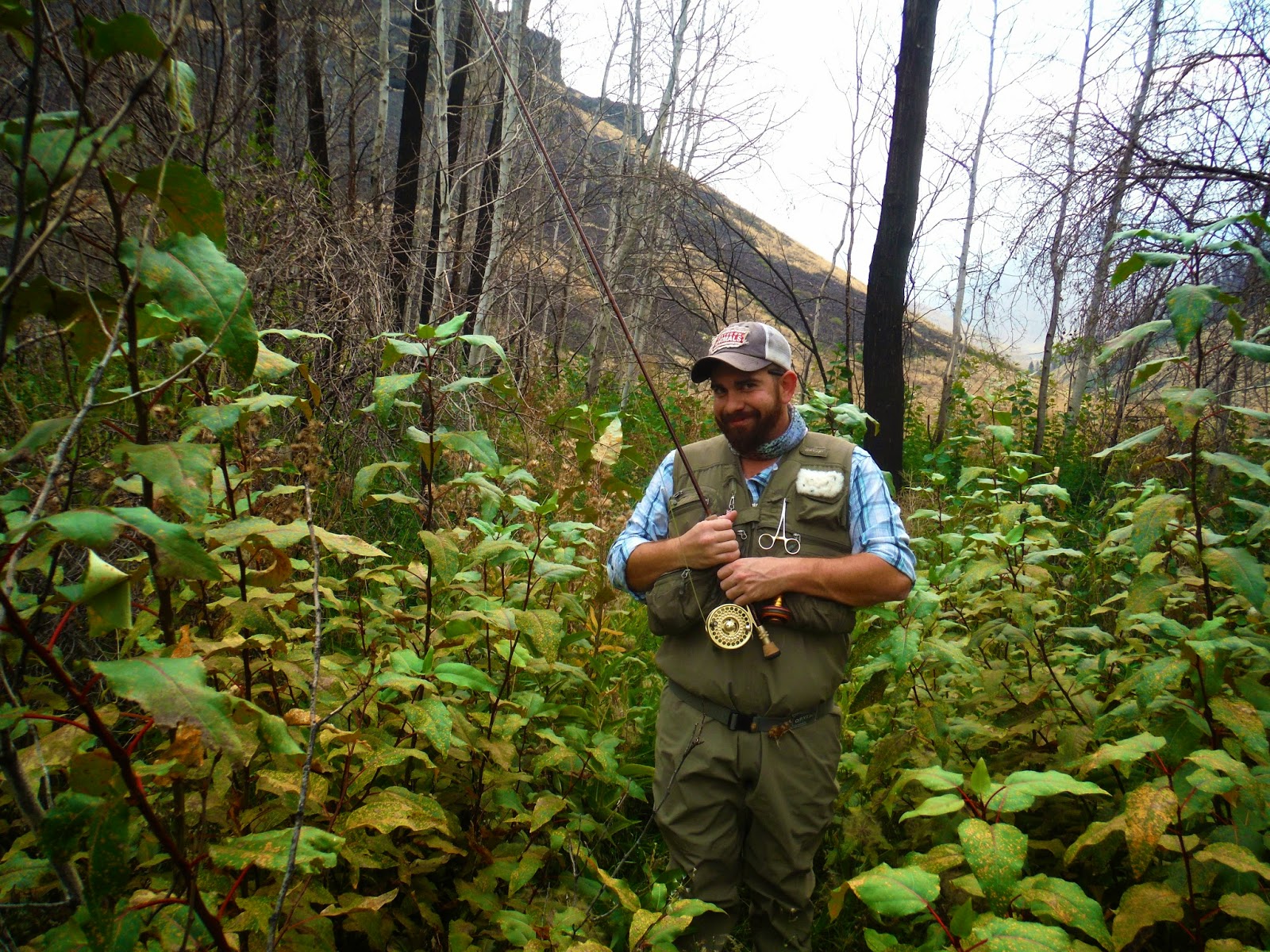 ﻿
Feef started with his streamer and I found some nice pocket water for a dry fly.  600 CFS has always paid off for me, but today was testing that winning streak. For hours I walked upstream, casting a dry fly with no success. Feef was blasting his streamer in every nook that looked liked the home of a fish, but he was also coming up empty handed. 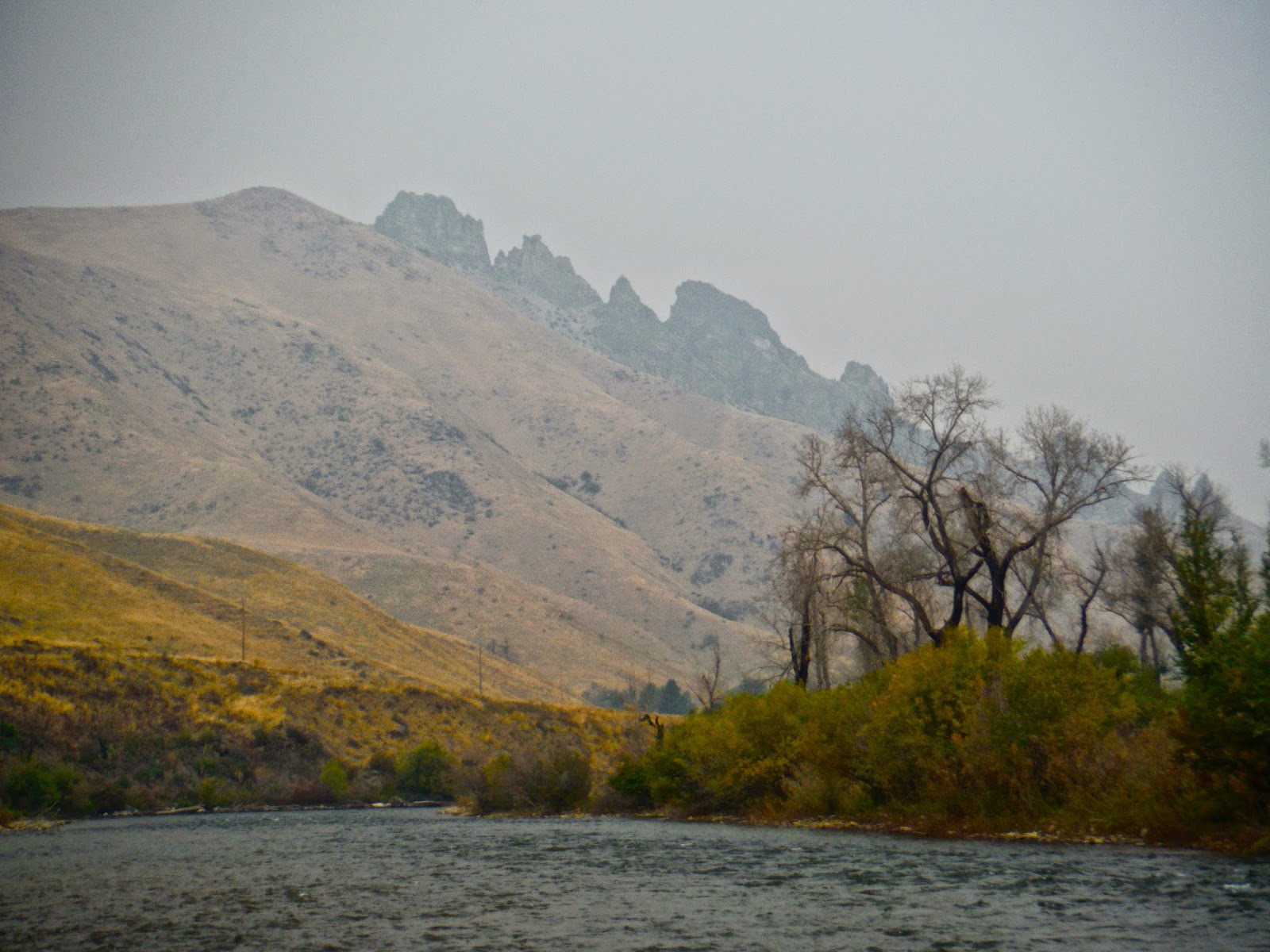 “What are you doing?” Feef asked, as I snipped my dry fly leader down to six feet.
“I’m setting up a Euro-nymphing leader.” I said back, while holding line in my mouth. I brought out my slinky and attached it to my leader, then built the rest of the leader with 3X and 4X tippet.
“I know there is a fish right here,” I said, tying on a stonefly nymph. “And I’m going to get it!”
I flicked my flies upstream, aggressively, and kept my slinky taught as I led my flies downstream.  The orange slinky stretched, indicating a fish, and I reacted just as quick!
“Nice, Brother!” Feef said, as I fought my fish into my net. ﻿ 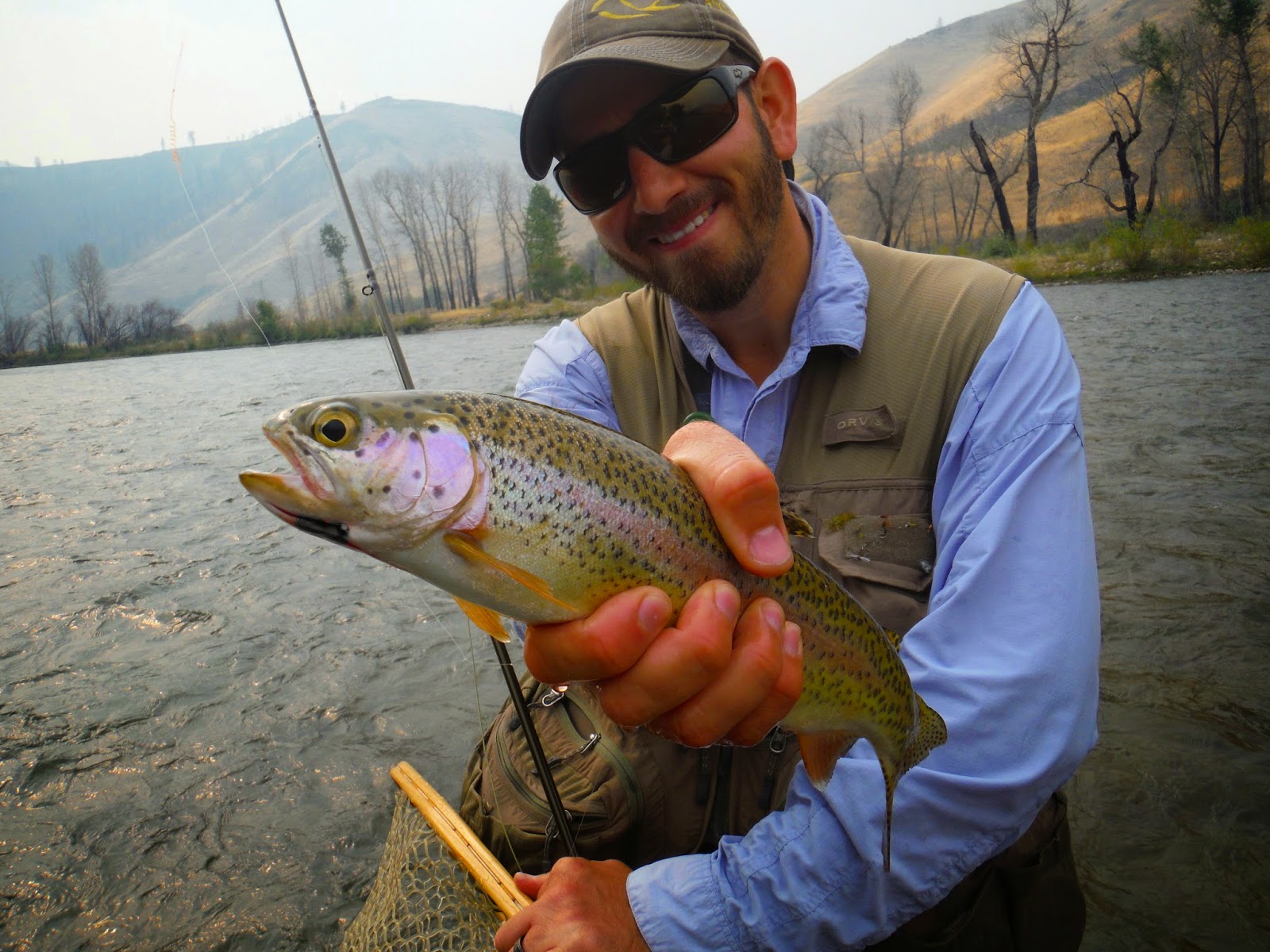 ﻿”Want me to rig you up?” I asked, but Feef shook his head no: he was hell-bent on streamer fishing.  I flicked my flies back into the water, and got another take.  The hook set alone sent this little fish flying out of the water. 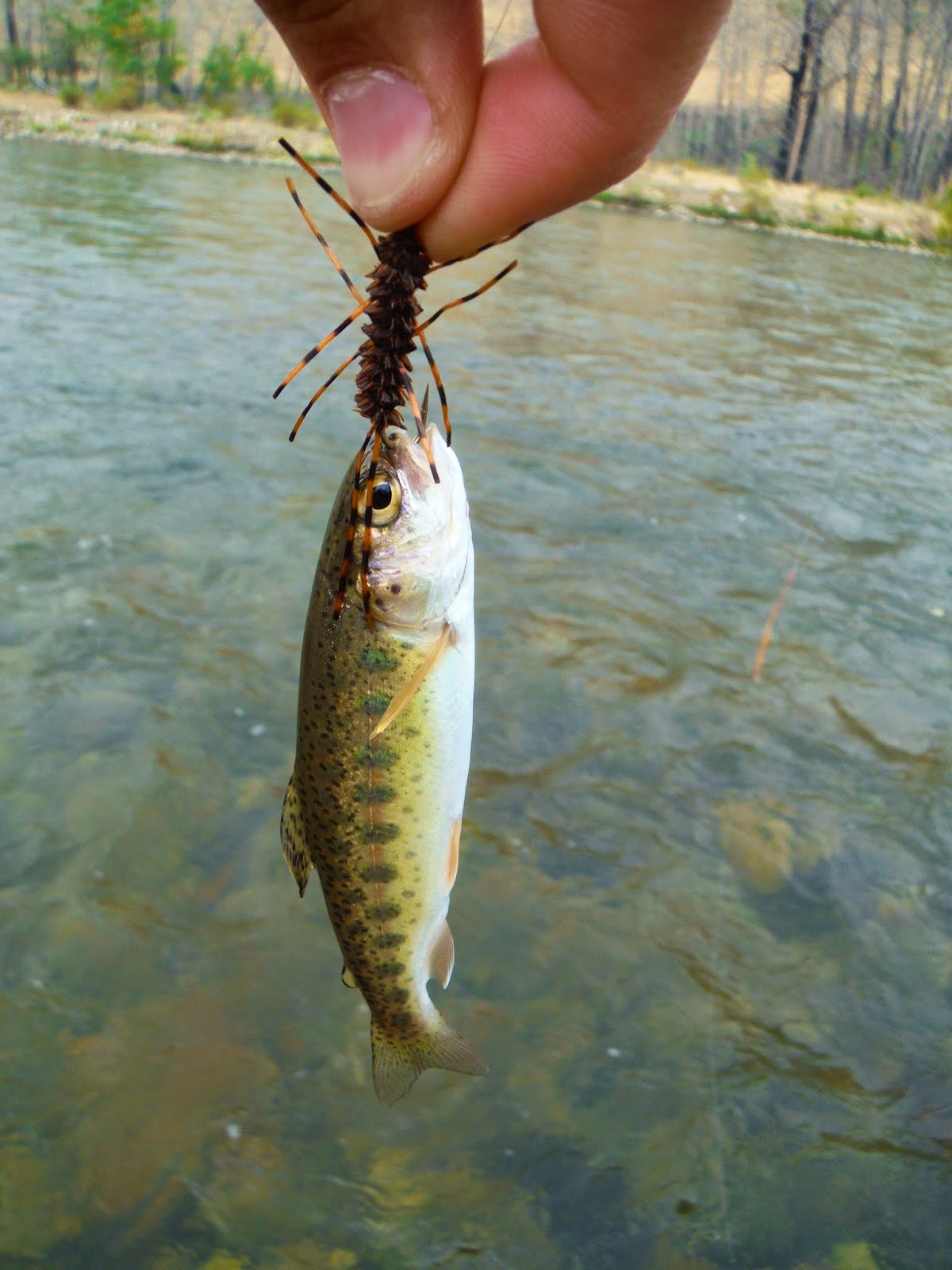 “What are you doing eating a fly this big?” I asked the fish before I unhooked it.
“Okay, that’s your lesson for today.” I said, before I dipped the little fish back into the water and it shot away.
It was no more that two or three casts later before I was into another fish.
“Already?” Feef yelled, begrudgingly.
“How long would you like it to take?” I asked, bringing in the fish.  I quickly let it go, and could see that Feef was interested in trying something other than streamer fishing. 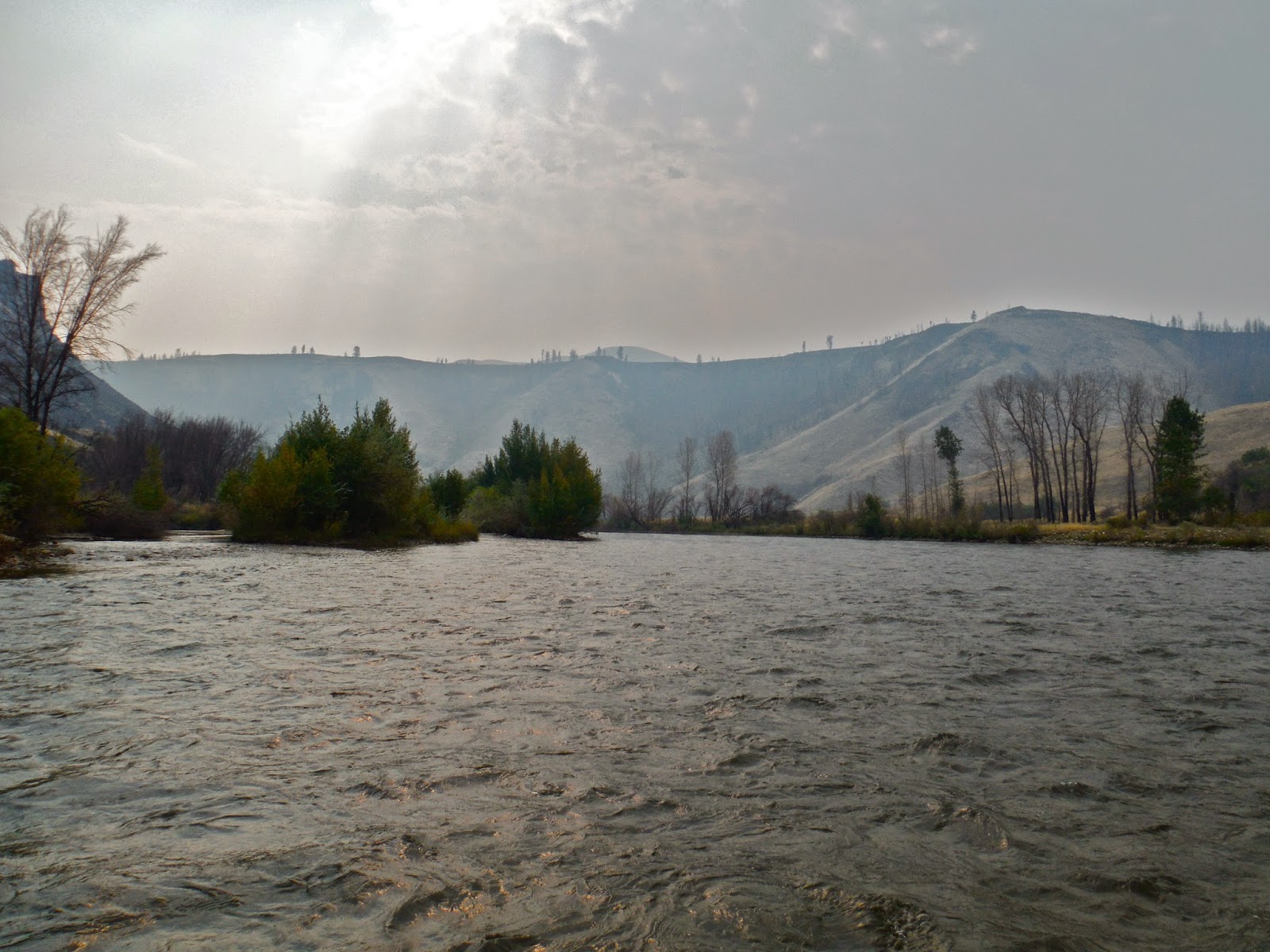 With no fish on his streamer thus-far, Feef handed over his fly rod for it to be rigged up Euro-style.  Feef took the lead as we worked the water upstream. 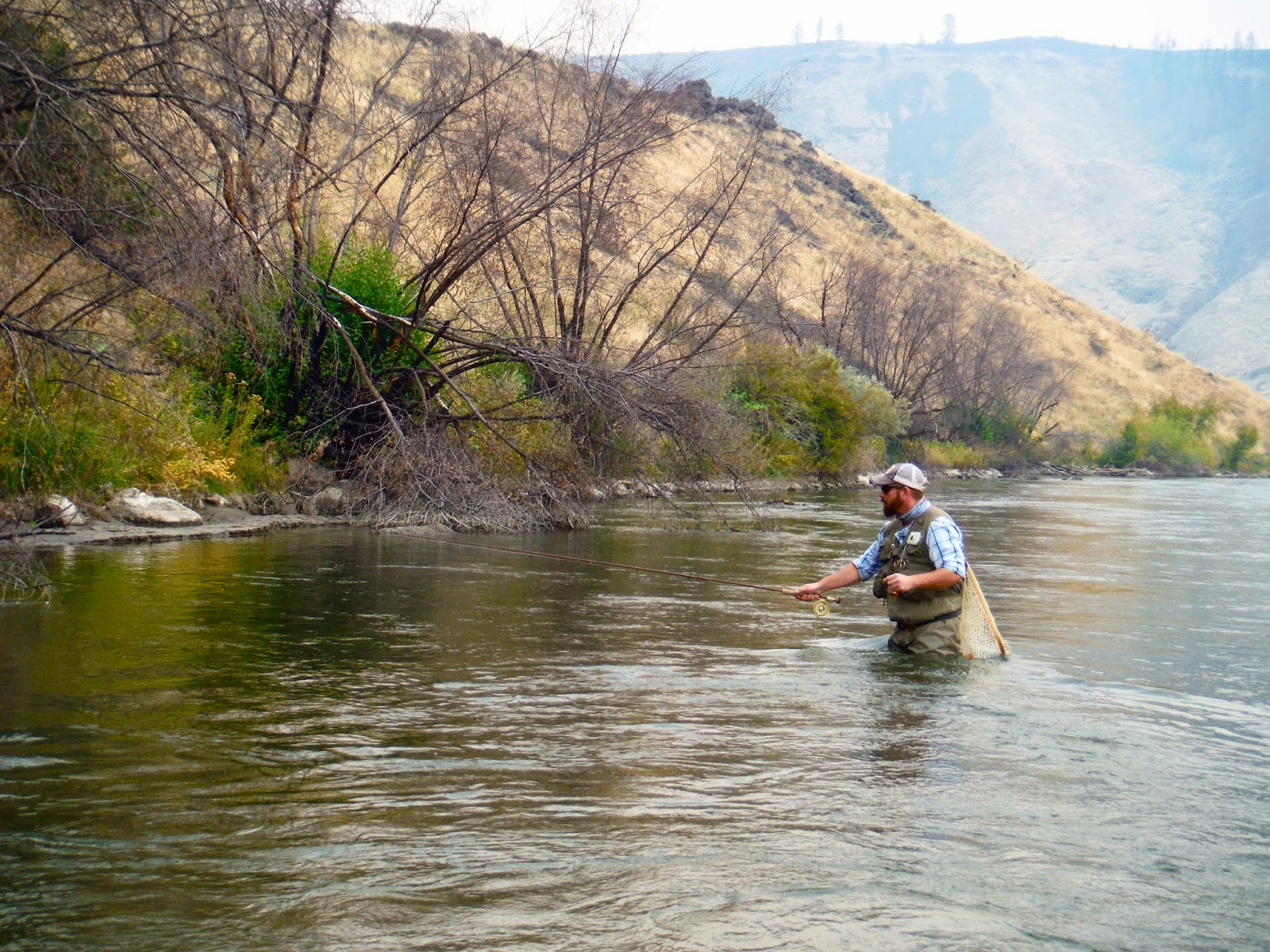 “I’m just cleaning up your mess here!” I said, after I set the hook on a fish. Feef took one glance at me, then went back to fishing.  I quickly let the fish go and followed him upstream. The very next rock (that Feef had just fished), I stuck another fish…
“Seriously?! Seriously?!” Feef yelled, angry at the river.
“Sorry, Brother.” I said, as I netted my fish. 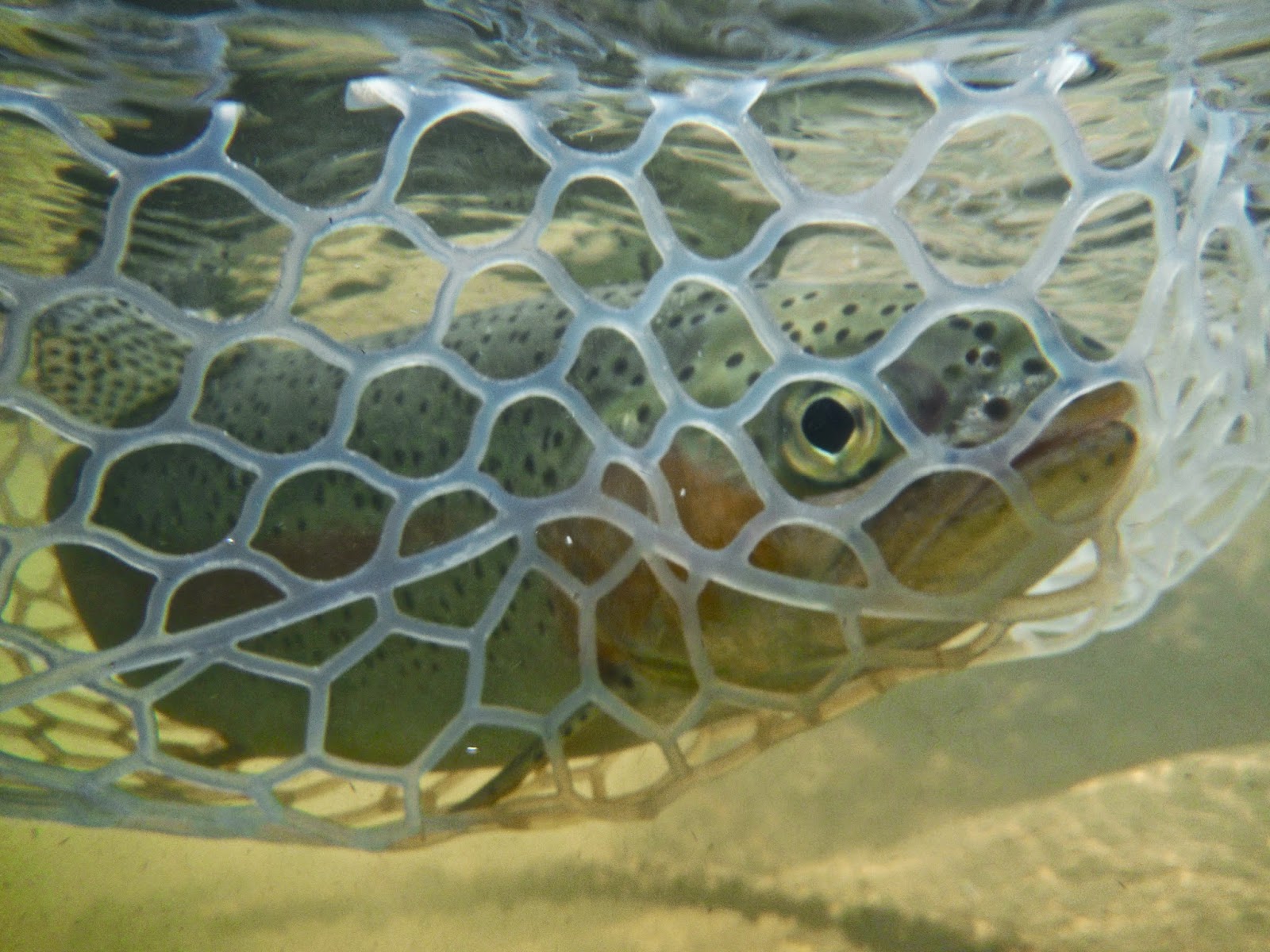 “How are you getting them?” Feef asked.
“The trout are close to the bank; just look for a deeper channel or behind a rock.” I said.  Feef didn’t waste any time getting closer. He flung his flies closer and closer into some pocket water, but on his third attempt, he misjudged his cast, sending his flies and slinky into some low hanging branches.
“I don’t think the fish are that close, Brother.” I said with a smile. 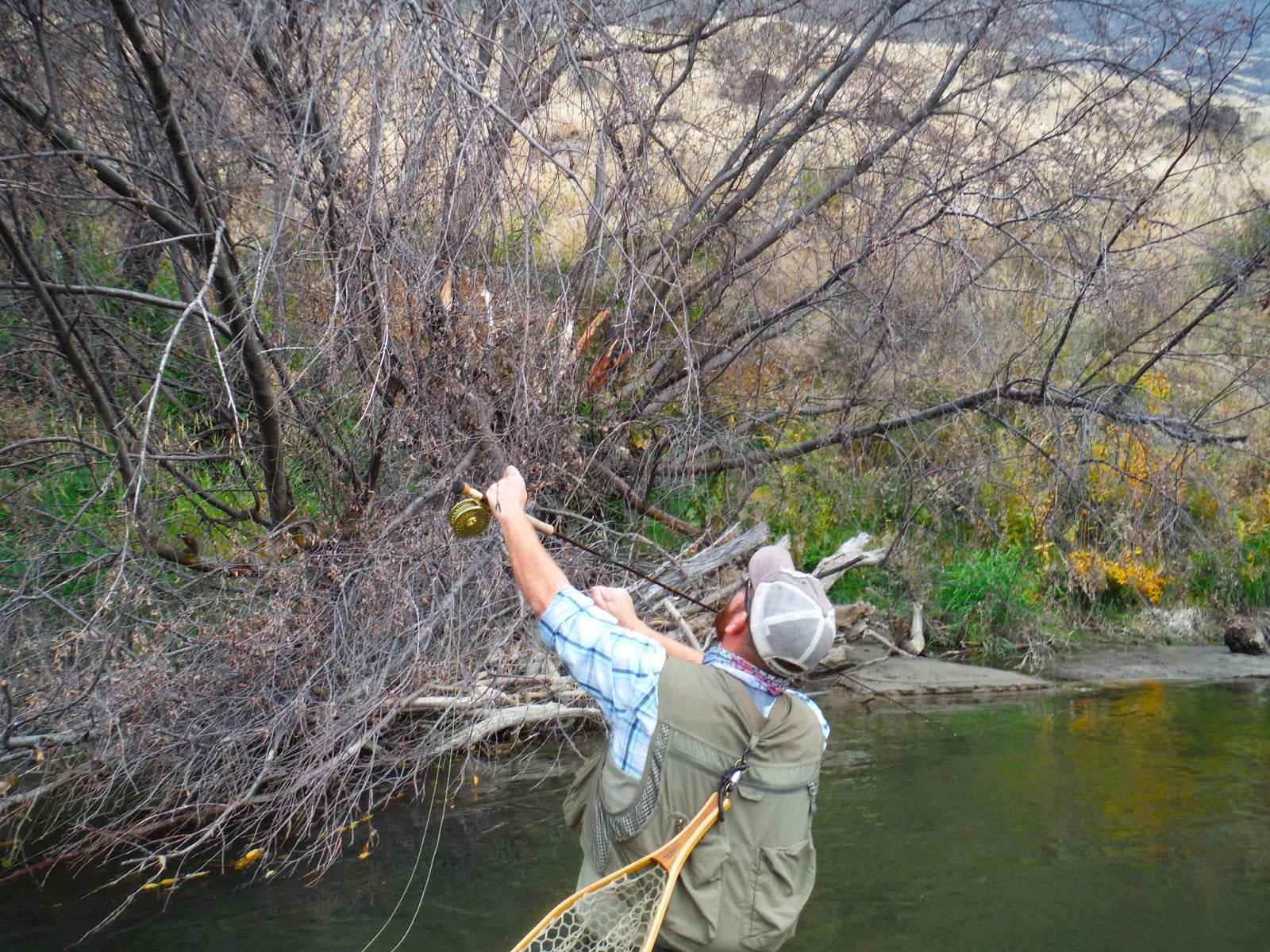 There was no saving his rig; Feef had managed to get both flies so tangled that we had to cut everything free.
“Screw this!” Feef yelled, shoving his slinky into his vest pocket, “I’m going back to streamer fishing.”
We both continued upstream, and with every fish I caught, Feef became more and more frustrated.
“I just want a FISH!” Feef yelled, screaming at the river.
“Well that’s nice, Brother… but first, can you take a picture of me and my fish?”
“Give me your stupid camera.” Feef said, stomping over to me.  I handed my camera to him saying, “Make it a good one, Brother.” 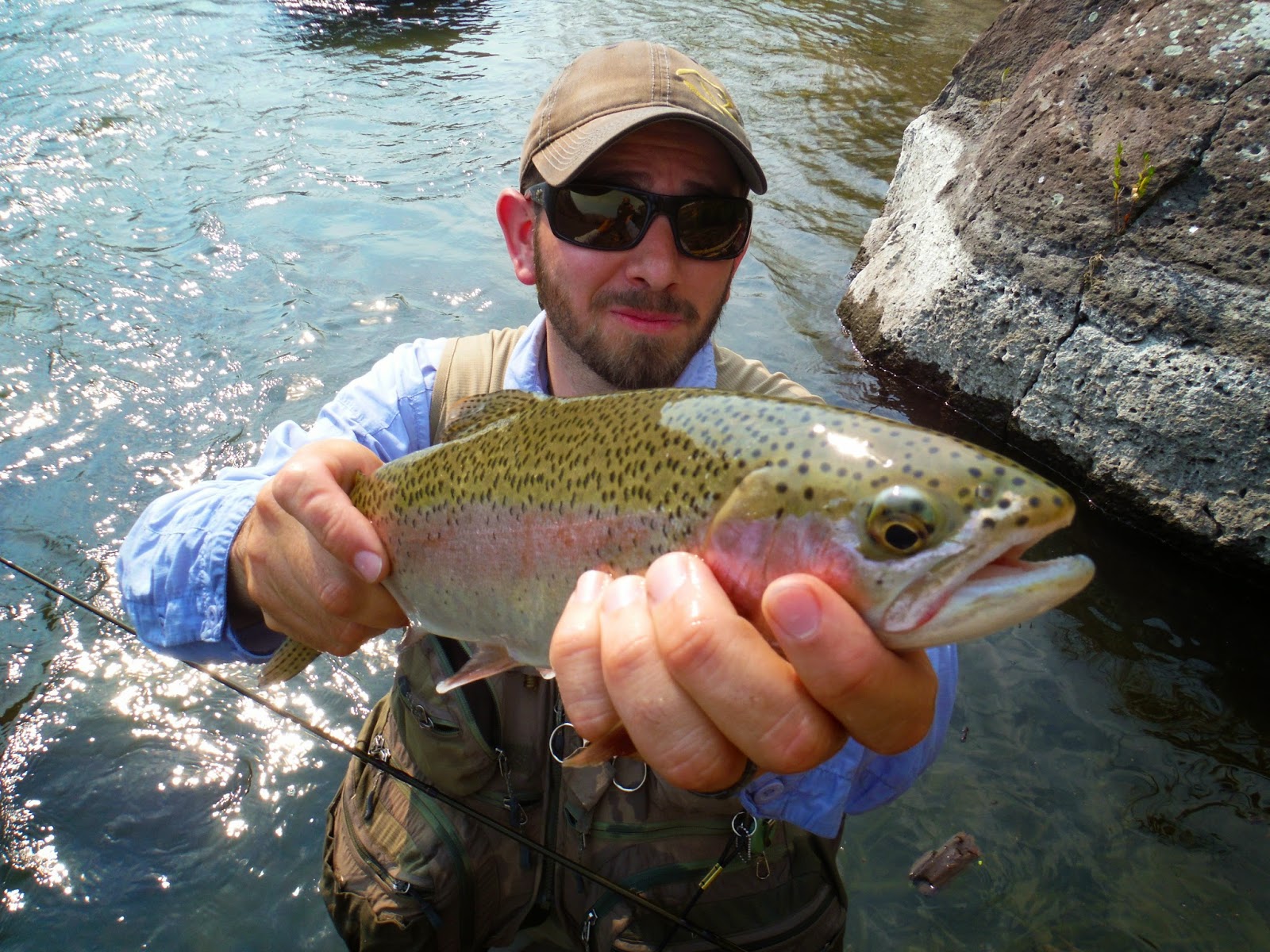 I dipped my fish back into the water, and as it swam away, my alarm went off.
“No, no, no…” My brother exclaimed. I too was a bit surprised. It did not feel like we had spent so much time on the water, but after looking at the time we had to get going.
I made my way to the bank and when I looked back, Feef was still in the river.
“We better get going.” I said to him, but Feef hardly acknowledged me.
“Just a few more casts.” He said, hungry for a fish.  His white streamer went flying into a pocket above a large rock, and with one big strip, a fish took!
“OH!” Was all Feef could manage, as his rod bent with the weight of a fish!  Laughter filled the river as Feef’s fish splashed around.
“Brother, don’t lose it!” I yelled, adding to the pressure. The intensity on Feef’s face as he brought his fish in was unmistakable: he was NOT going to lose this fish. A quick scoop with his net, and the fight was over.  I had my camera ready as Feef pulled his fish out of the net and held up his prize! 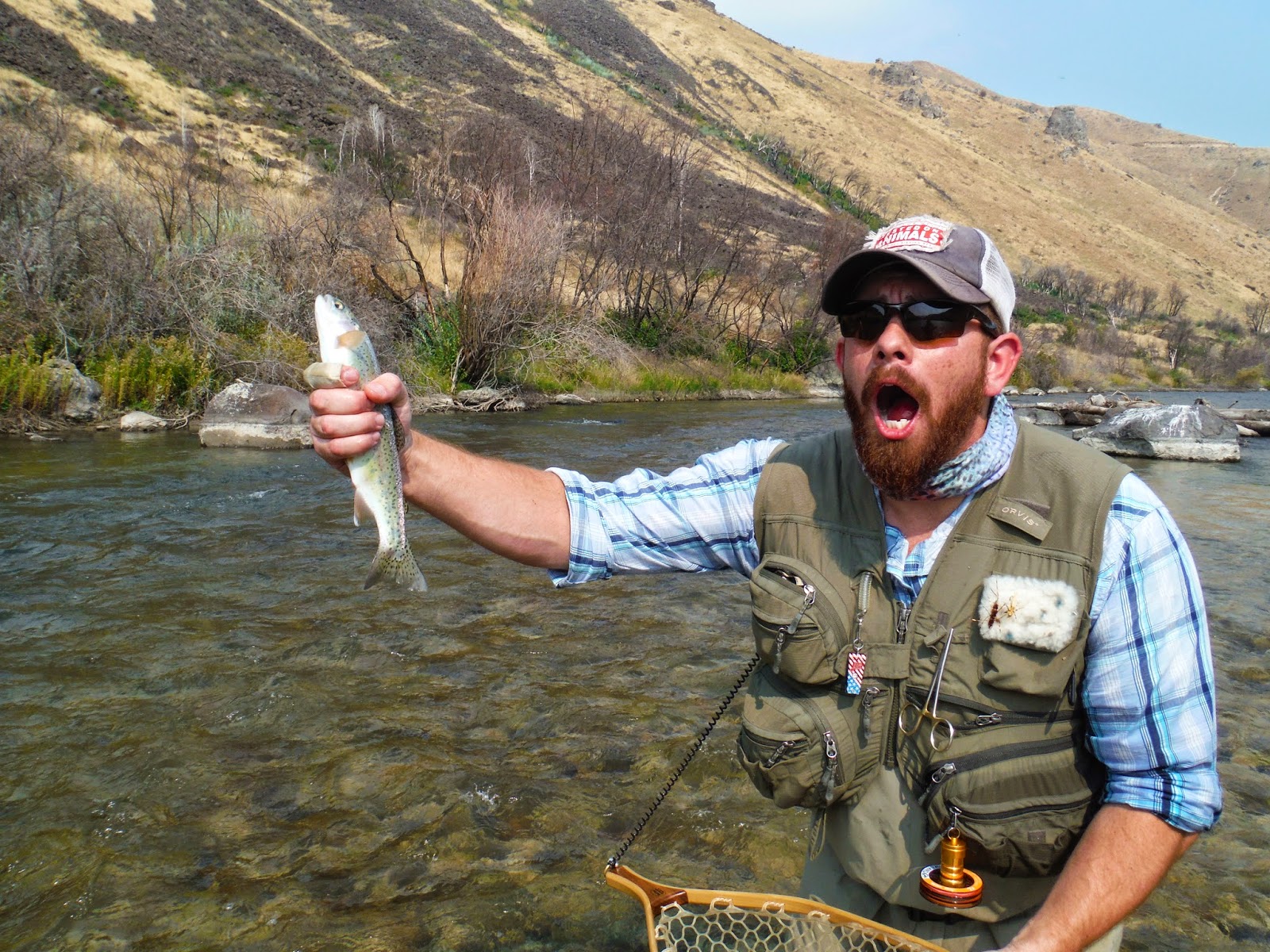 “Alright, now a good picture.” I said, as Feef put his fish back in his net and underwater before taking it back out again for a better picture. 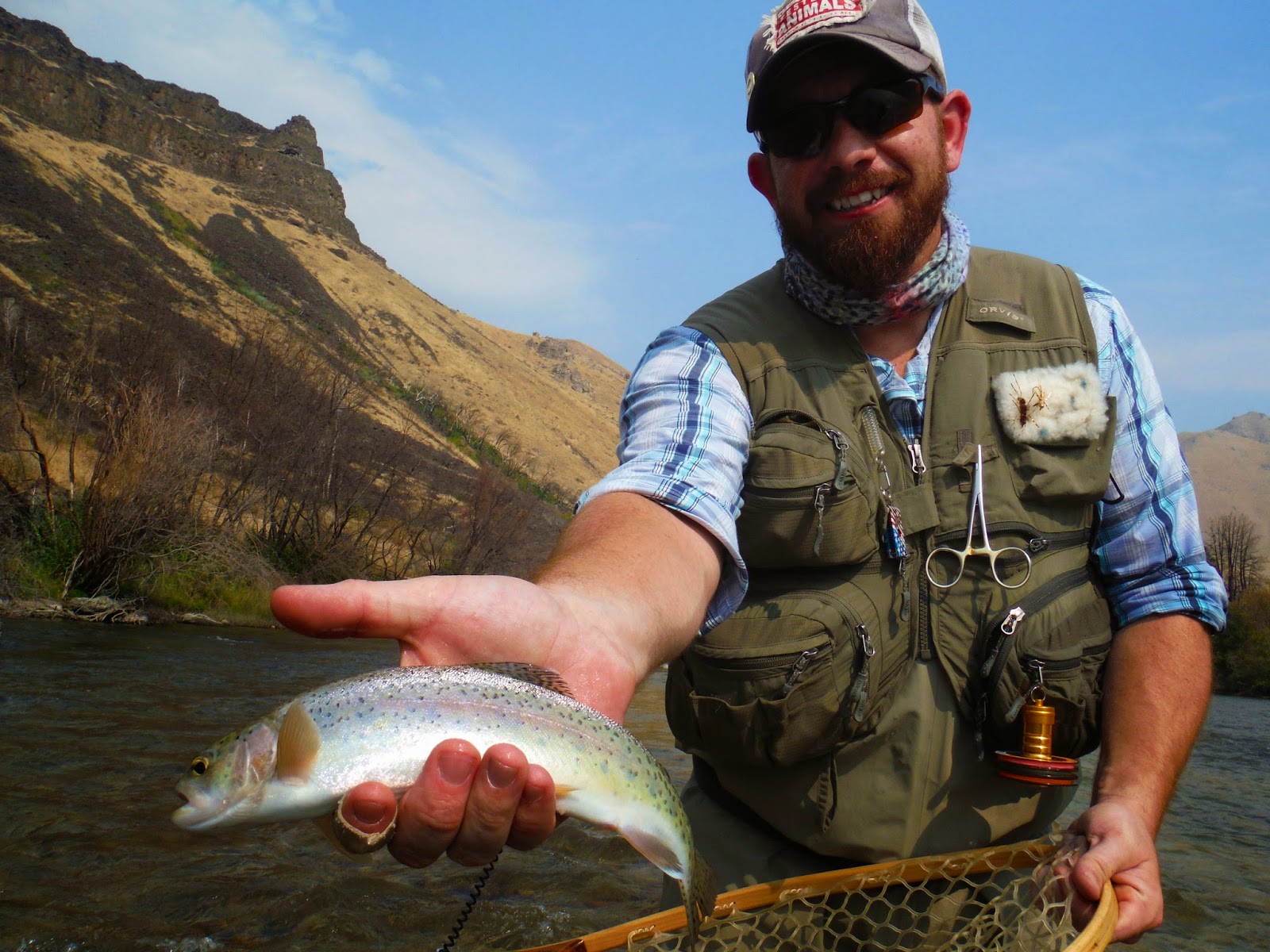 Feef slowly put the fish back into the water, and it darted away, happy to be alive.  Feef let out a happy Aaaaahhh as he stood back up. He then looked over at me, smiling.
“Okay, I’m ready now.” He said, and we started our walk back to the car. Feef relived his fight with the fish, telling me every detail of the strike and fight.
“Well, you were right about one thing.” I said to him as we shut our gear in the back of the car.
“What?” He asked.
“You caught all your fish on a streamer today.” I said with a smile.  Feef looked over at me, his initial smile faded… “That’s messed up, Brother.”