Skip to content
“Don’t you wish you had the opportunity to take a fly fishing class when you were in seventh grade?” John Wolter, the owner of Anglers Fly Shop and my boss, asked me while we were tying flies in the shop.
“Heck yeah!” I said without hesitation.
“Well Nick’s [John’s son] school asked if I would be involved in a fly fishing class!” John said, enthusiastically.  He stood there looking at me with a simple smile on his face, waiting for my response.
“Sounds fun.” I said back to him.
“Yep…” He said, with the same happy smile. “And you know what else…?”
“I get to help?” I said… then quickly changed my tune. “I mean…  I GET TO HELP!!!”
“All riiiiiight!  I knew you would be thrilled!” John said, and before we knew it, twelve seventh graders were gearing up to try their luck on the Boise River. 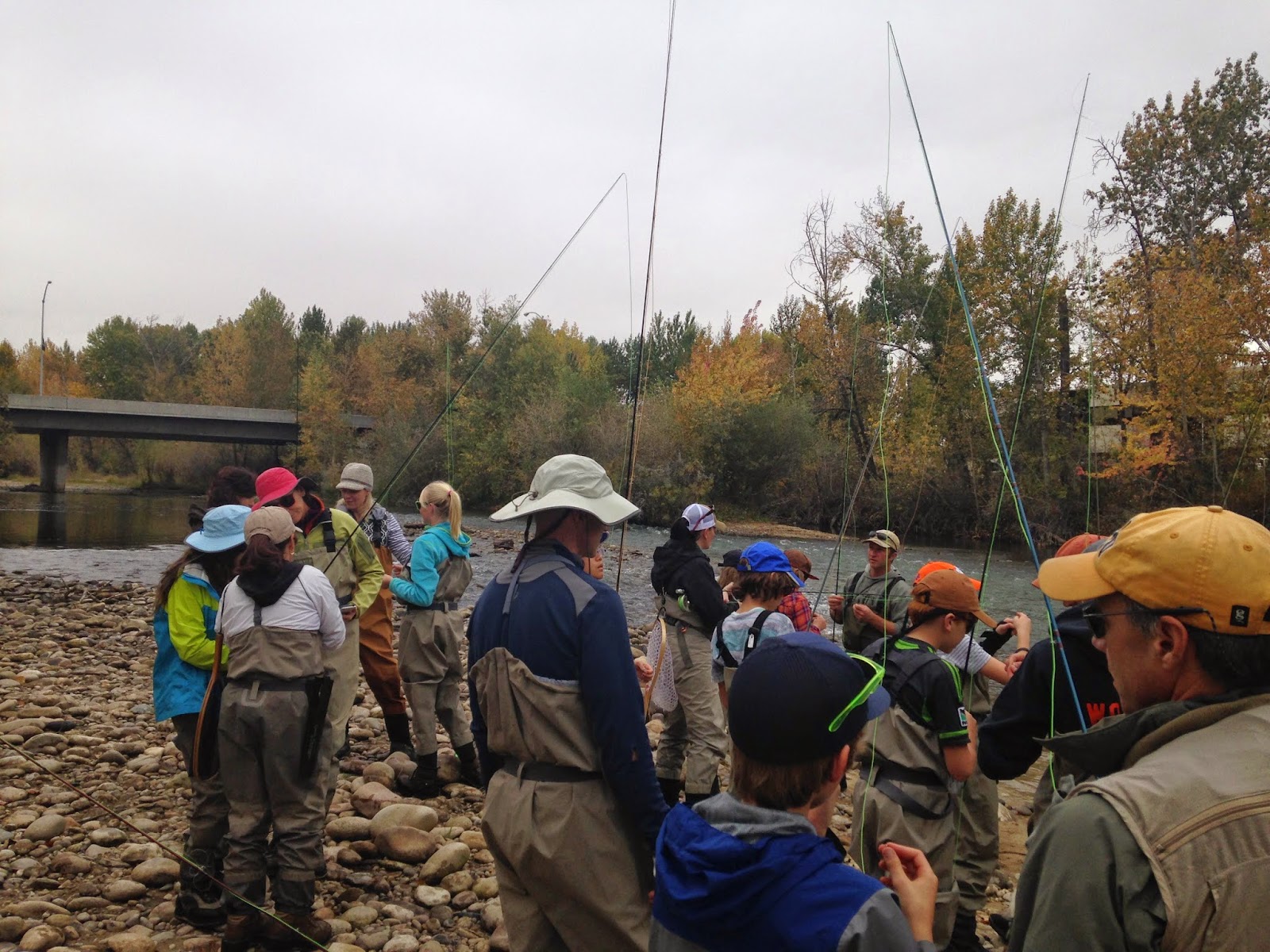 Parents and a few ladies from the Woman Fly Fishers of Idaho club were there to help, and as soon as John recognized that all kids were present, he called out to the class.
“Okay guys, follow me.” Every volunteer and student made their way across the water for a quick instruction. 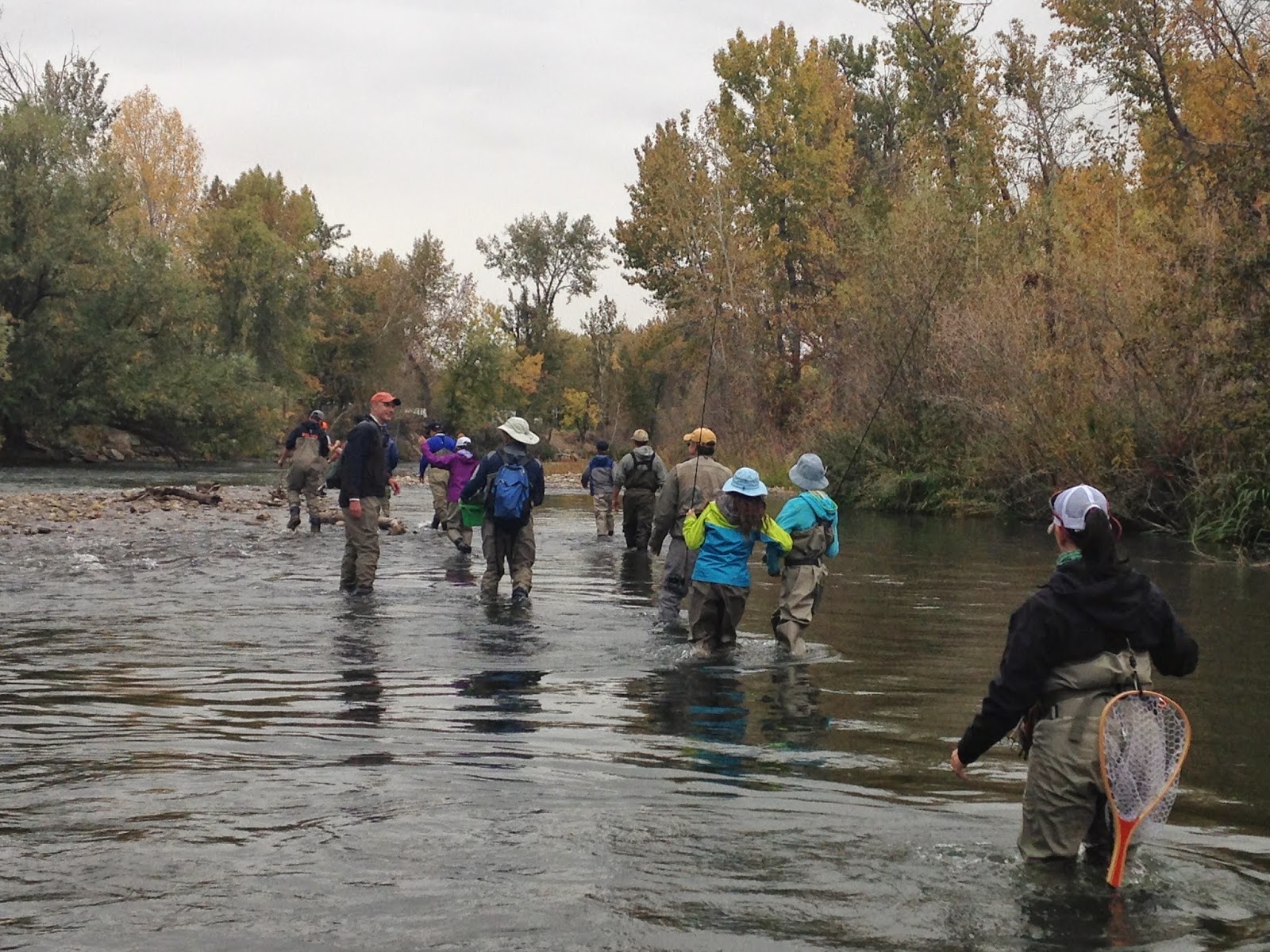 In a short amount of time, John covered water loading and line control for nymphing, then released us in small groups to fish. 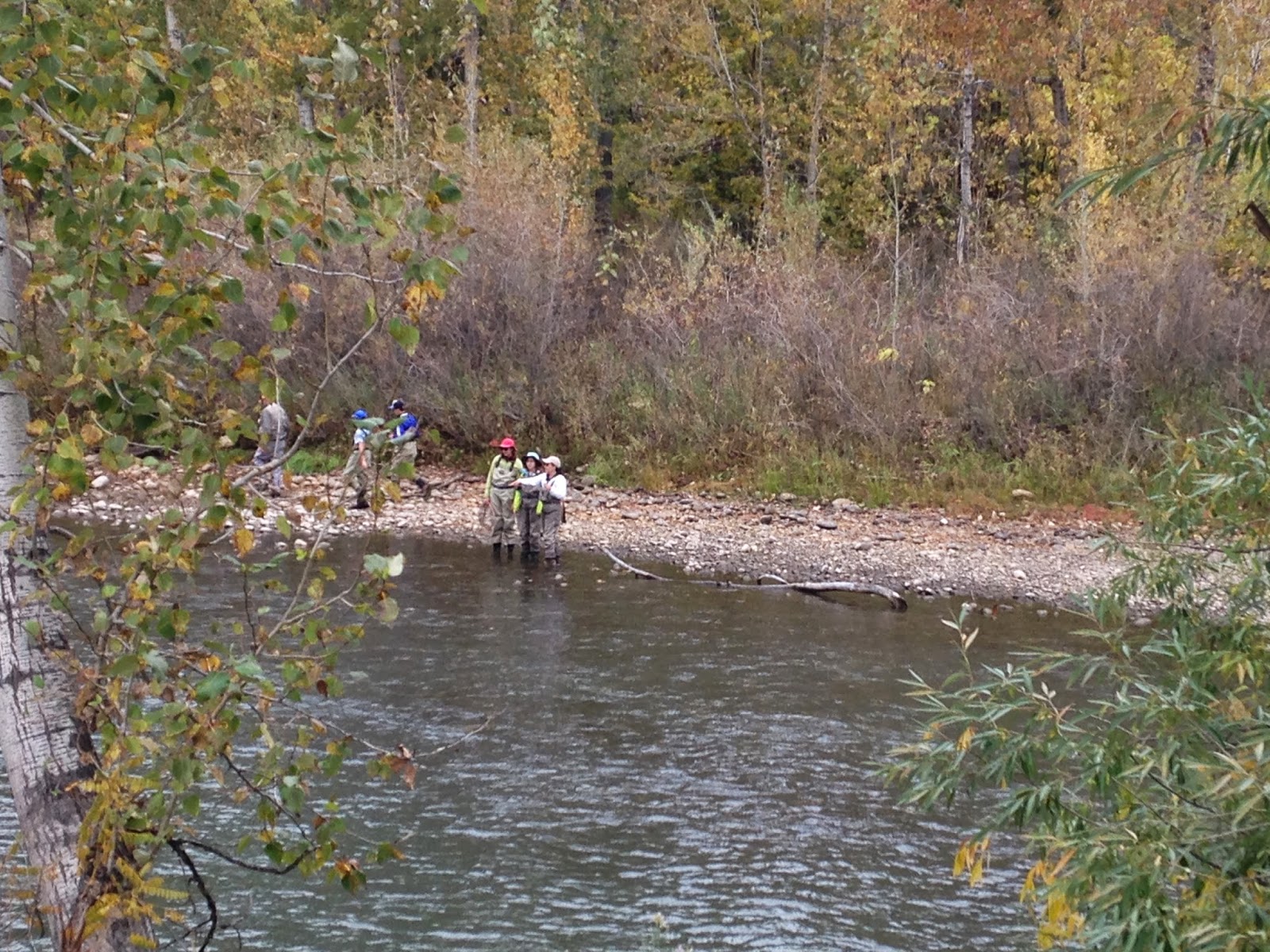 Naomi, Kai, and Preston were the students in my group. Connie, from the woman’s club, and Naomi’s father were also there to help. We split the students up so that they were close by, yet far enough away from each other to avoid any entanglements. The two boys looked like they had fly fished before, so I focused my attention on Naomi. As soon as she understood how to bend her line properly, her indicator darted under the water and zigzagged with a fish!
“Set it!” I said quickly, but it was too late: the indicator popped back up, lifeless.
“You need to set the hook when your indicator goes down, sweetie.” Her dad said.
“I don’t know what that means.” Naomi protested.
“It means you need to pull back on your fly rod,” I said. “That way you hook the fish. What if I said ‘pull back’; would that help?” I asked.
“Yes.” Naomi said.
“Then get your fly back out there. That fish is still hungry.” I said to Naomi, but she was way ahead of me. Naomi made a few more casts before her indicator shot under again.
“Pull back!” I said, but it was not needed. Naomi’s little arms shot skyward, and the tip of her rod danced with a fish!
“A fish! A fish!” She yelled ecstatically. Her trout shimmered with every tug as I unhooked my net and scooped it up to land the fish. Naomi’s father beamed with pride after seeing his daughter’s face light up. After all, this was the very first fish she had ever caught, and it was on a fly rod. 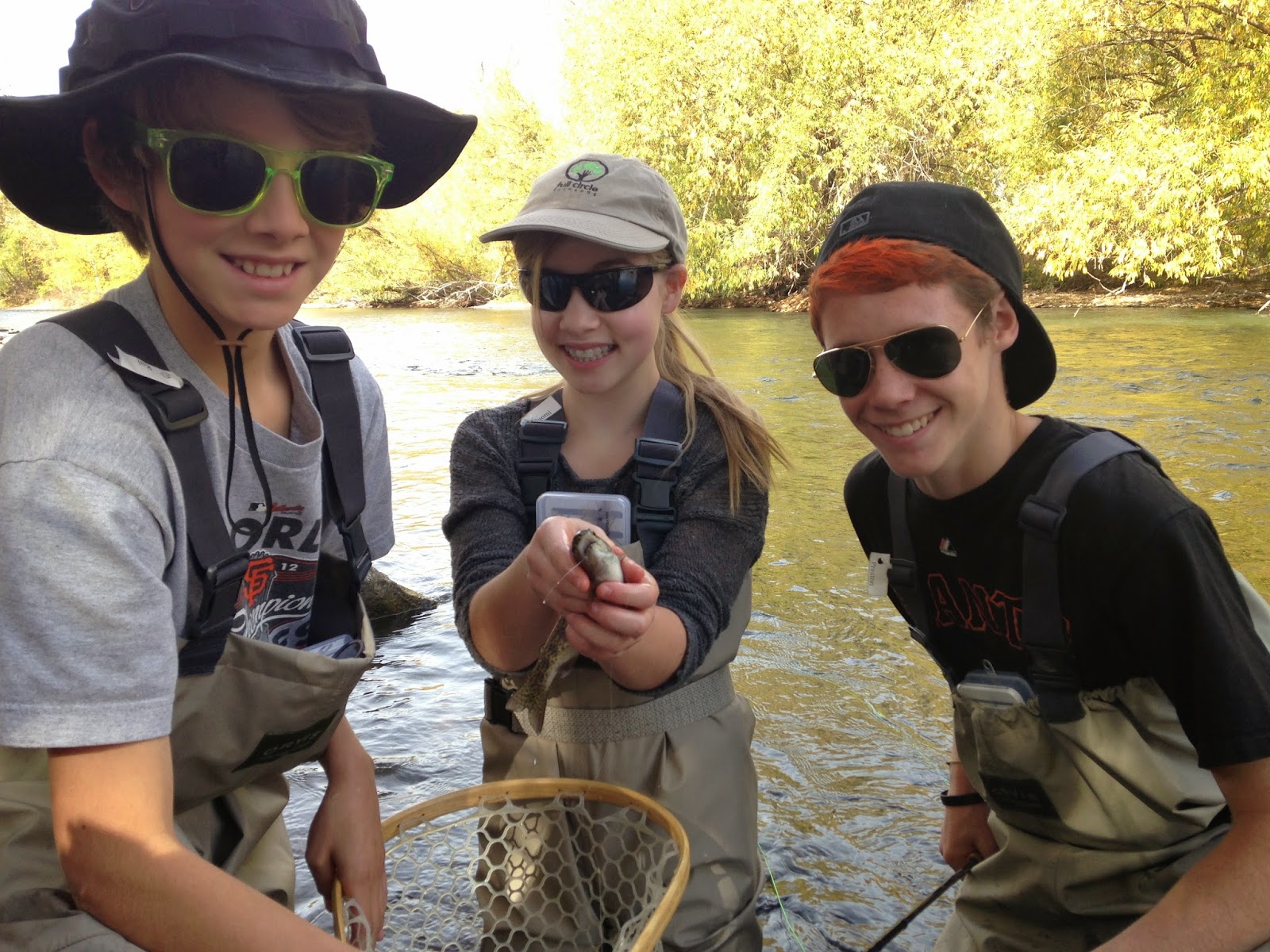 Naomi gently placed the fish back into the water, and it slipped from her fingers to return home.
“Nice job!” I said to her, as her fish disappeared into the river. From there, Naomi and her father went back to fishing while I walked up to help Kai. 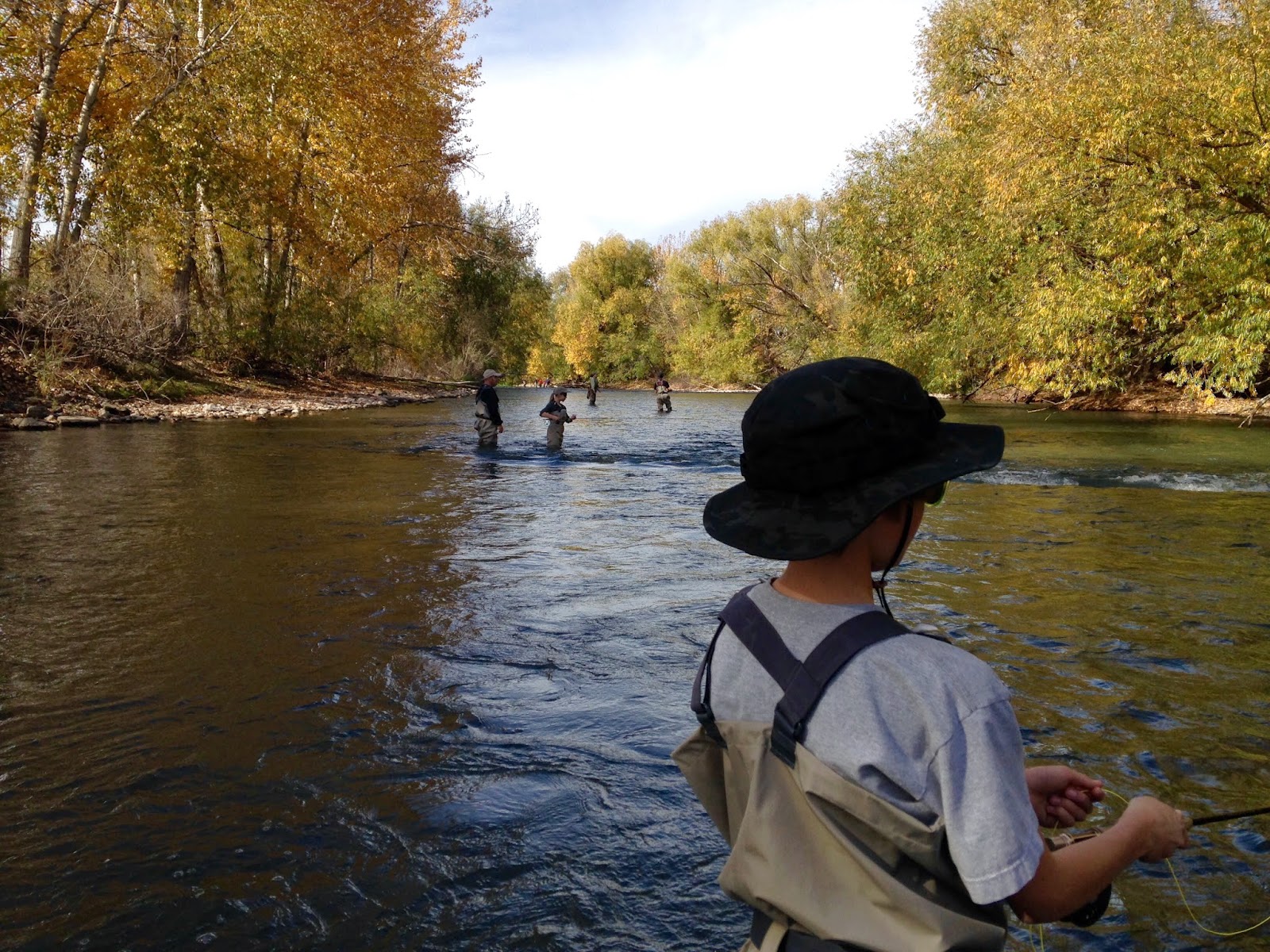 After I quickly adjusted his casting, I heard a scream from downstream.
“I got another one!” The little voice hollered. I looked down and saw that Naomi had on another fish.  Her father was right by her side while I rushed to net her fish.
“It’s a white fish!” I said, with a smile.
“Is that good?” Naomi asked.
“It’s a new species for you!” I said back. Getting a new species on a fly rod is a big deal, especially for Naomi, whose excitement was captured on camera! 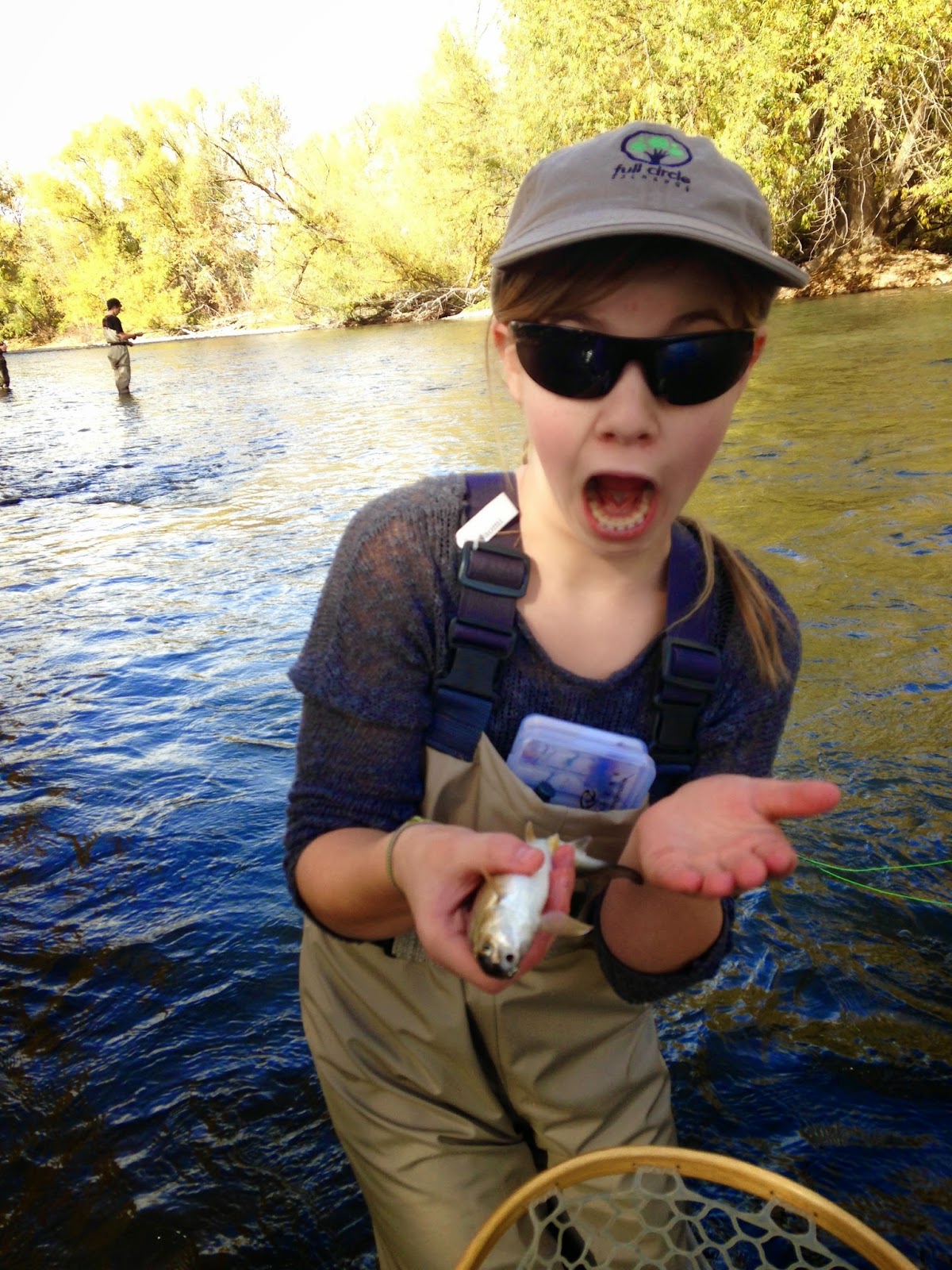 Naomi once again placed her fish back into the water, and watched as it swam away and out of sight.  Further downstream I heard Connie yell out that Preston had a fish on.  I quickly made my way down to him and netted his fish.
“It’s not exactly the biggest fish in the world…” I said, but was cut off.
“That’s a nice fish. You be quiet, Erik!” Connie snapped, as I netted Preston’s fish. Thankfully, his fish was big enough to stay in my net, but hey, a fish is a fish, and Preston was happy! 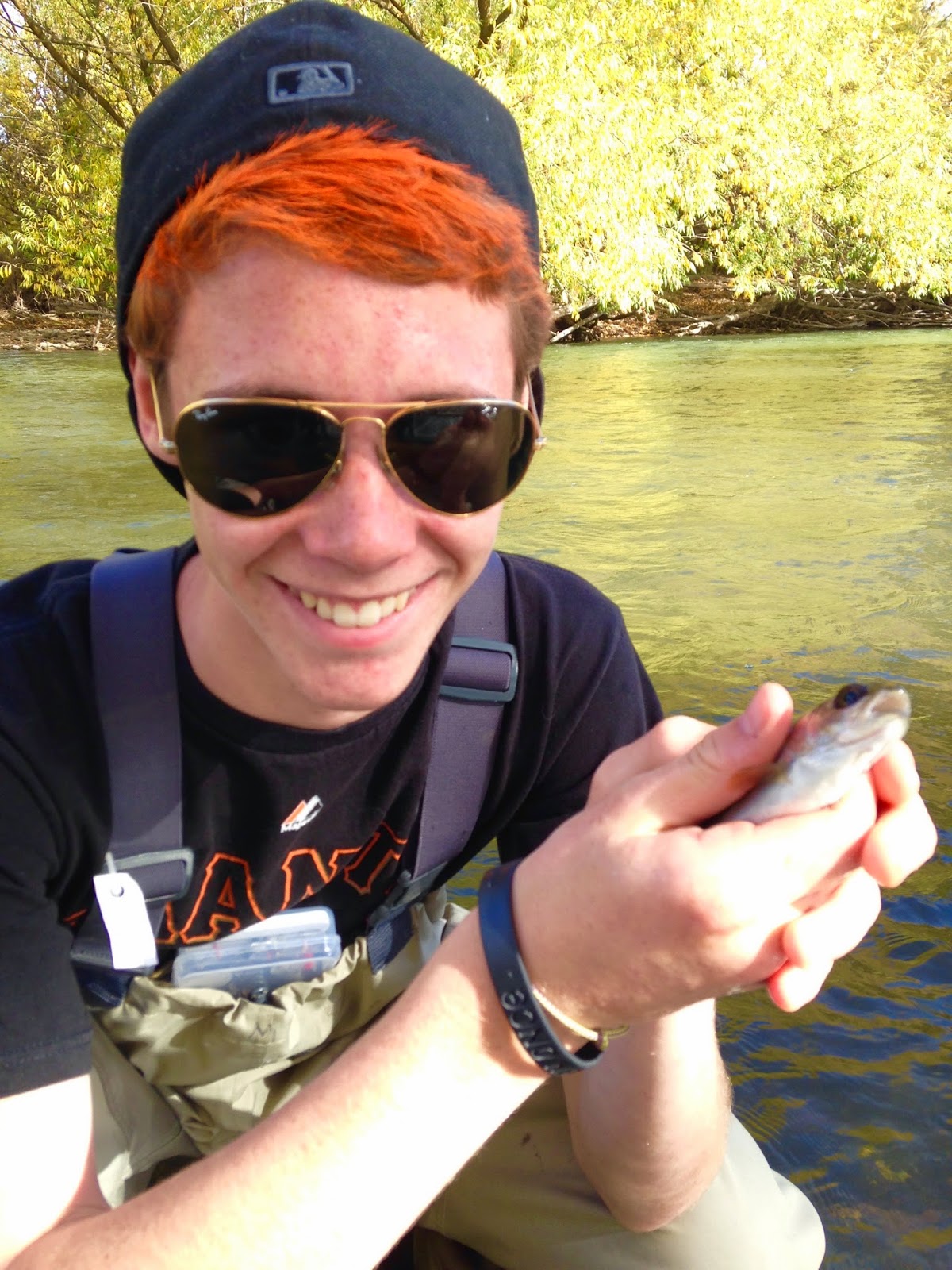 In the blink of an eye, Preston’s fish was gone, and I made my way back up to Kai.
“You know…” I said to Kai, quietly. “You are the only one who hasn’t caught a fish yet.” Kai just looked up at me and shook his head. I stood near him, offering up advice as he fished. His indicator went under, and Kai didn’t react fast enough.
“Ohhhh, that was a fish, Kai.” I said, and Kai had seen it too: his indicator had not only shot under, but jerked upstream before coming back to the surface. I could tell that he was getting frustrated at not having caught a fish yet, so we moved a little downstream.  Another cast, and Kai’s indicator shot down! THWACK!!! Was the sound that protruded from the indicator after Kai set the hook faster than Bruce Lee!  An orange indicator with a hook attached was the last thing I saw hurling towards my face before I turned away.
“Sorry.” Kai said, gathering his fly line.
“It’s okay, you did what I would have done.” I said back. “The fish is still there. Get it!” I encouraged.  Kai pitched out his line, and his indicator shot down.  This time when he set the hook, there was a fish attached. 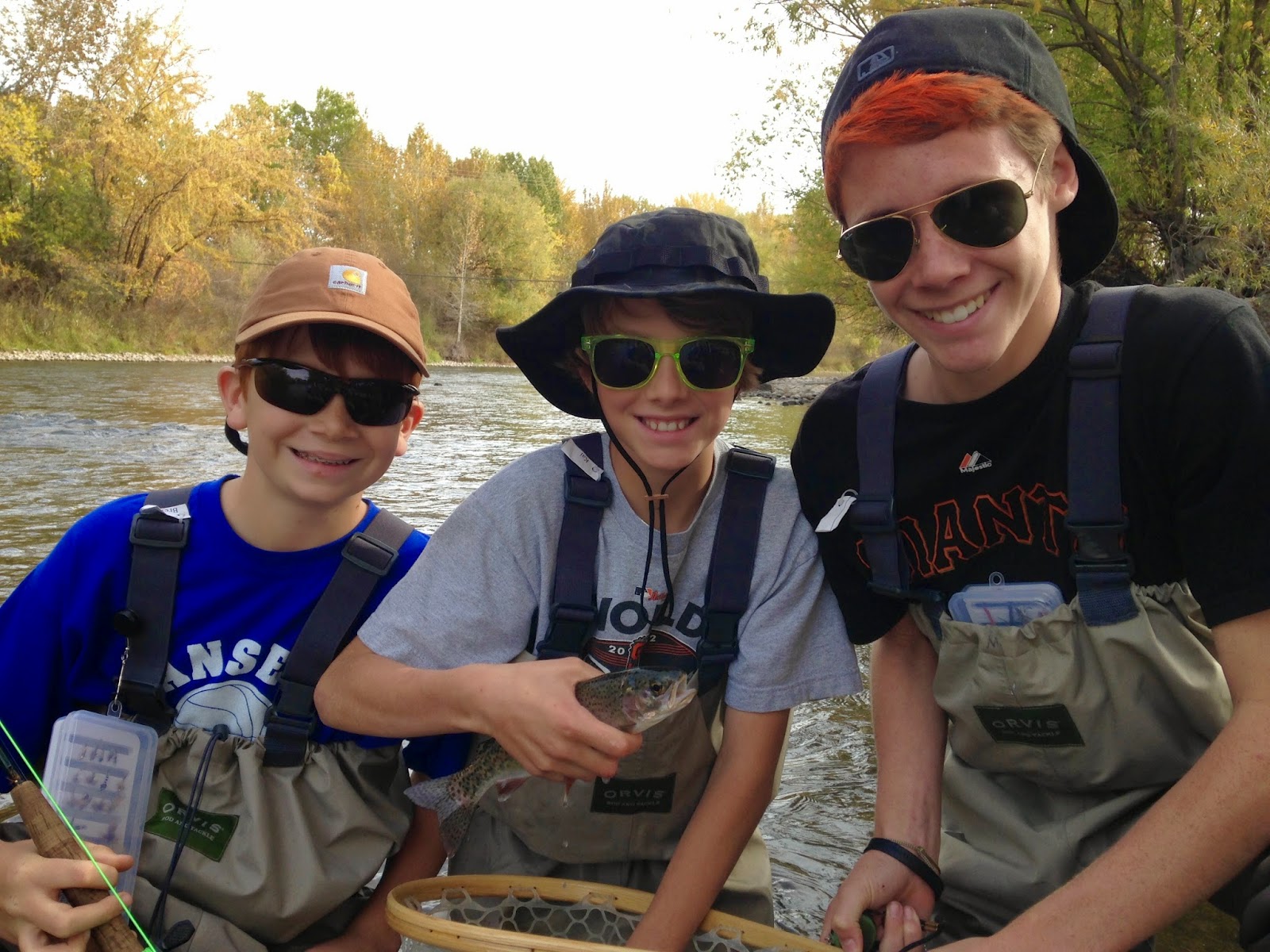 Kai was all smiles for his picture.  He had just caught a respectable rainbow trout, and the other students around watched as his fish returned home.

Only a moment before Kai had caught his fish, John sent Brennan, another student, up to me from downstream.  It was already quite the task getting the three of my assigned student into a fish, but I welcomed the added challenge. Brennan had yet to catch a fish, and today was hopefully his day.  The only problem was… my alarm went off, indicating that we only had five minutes before it was time to go.
“Five minutes everyone!” I called out to the group, then looked at Brennan. “Let’s get a fish!”  Brennan didn’t waste any time, and we got to a spot on the water that hadn’t been fished yet.  As we waded out Brennan fished, and as we waded further out, he went to cast and had a fish on.  But with the sudden surprise of a fish, there was little time to react.  The trout that was hooked flew out of the water, spitting the hook in the process.
“Oh no!” Brennan yelled, knowing he lost his opportunity to bring in a fish.
“Come on, come on… we only have a few minutes.” I said, regaining Brennan’s focus from the lost fish.  The frustration of losing a fish was still on Brennan’s face as he casted and casted with no sign of another. My alarm went off again, and I quickly silenced it.  The group of kids and helpers were now waiting and watching from the bank as we remained out in the river, trying our hardest to catch a fish. Then it happened: Brennan made a beautiful cast, sending his indictor and fly right where it needed to be.
“Positive fish vibes!” I said, raising my hand towards the indicator as it floated downstream. Whether it was his good cast, or the positive fish vibes, Brennan’s indicator shot under and he set the hook!
“YOU GOT ONE!” I yelled.  Brennan’s face lit up like it was Christmas morning as his rainbow trout flew out of the water! One, two, three jumps from the fish, and all I could think was that it was going to spit the hook.  I quickly brought out my net and Brennan lifted the head of the trout so that I could net it. Cheers erupted from the group as we headed to the bank to take a picture of the biggest trout of the day! 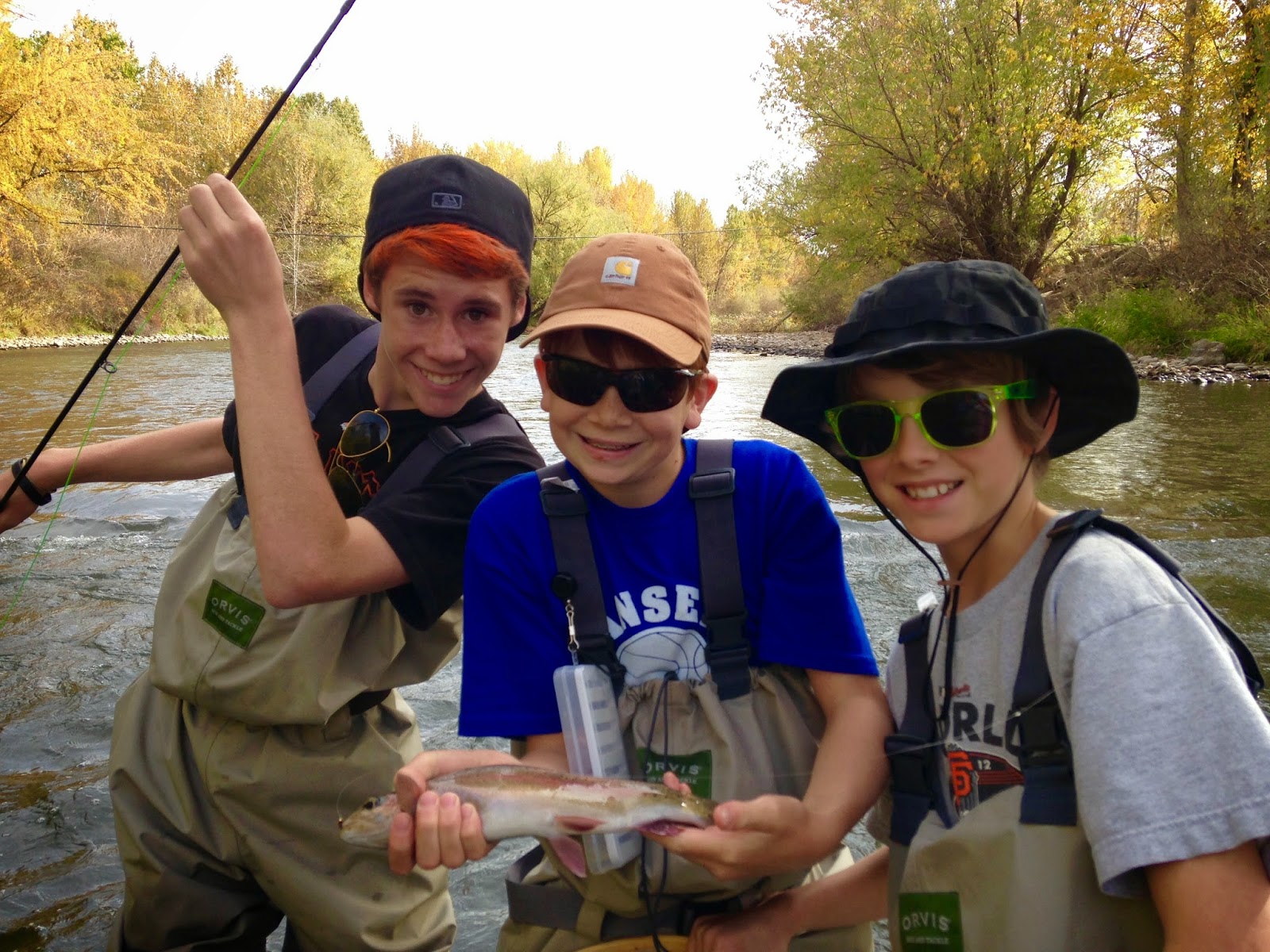 “There it goes, back home to its family” Connie said, before we got out of the river and walked back to meet up with the rest of the class.  Each student in our group was happy to share their fish story with the rest of the class, and every experience was told in full detail as other envious students came close to hear the stories.
“So, you got them all into a fish.” John said, smiling at me over a few students.
“You know what this means, right?” John asked, as he approached. “This means they will expect you to get them all into a fish next week!” John said, while patting me on the shoulder.
“Well, I would hate to disappoint.” I said, smiling back, ending a fun day with the Anser Charter School’s seventh grade fly fishing class.