Skip to content
For weeks now the 7th grade students of Anser Charter School have been meeting up to fly fish the Boise River, and the success rate of the students that fish in my section of water had spread like wildfire.  Small talk amongst the students before every outing was about who was going to be the lucky ones to fish the pipe!  Yes it was true, in my section there is a pipe that is clearly visible under the water, and it creates a nice break for fish to pile up behind.
What the students don’t know is that directly across the river from the pipe is a sewer plant, and to many anglers this particular landmark is known as the poop pipe. 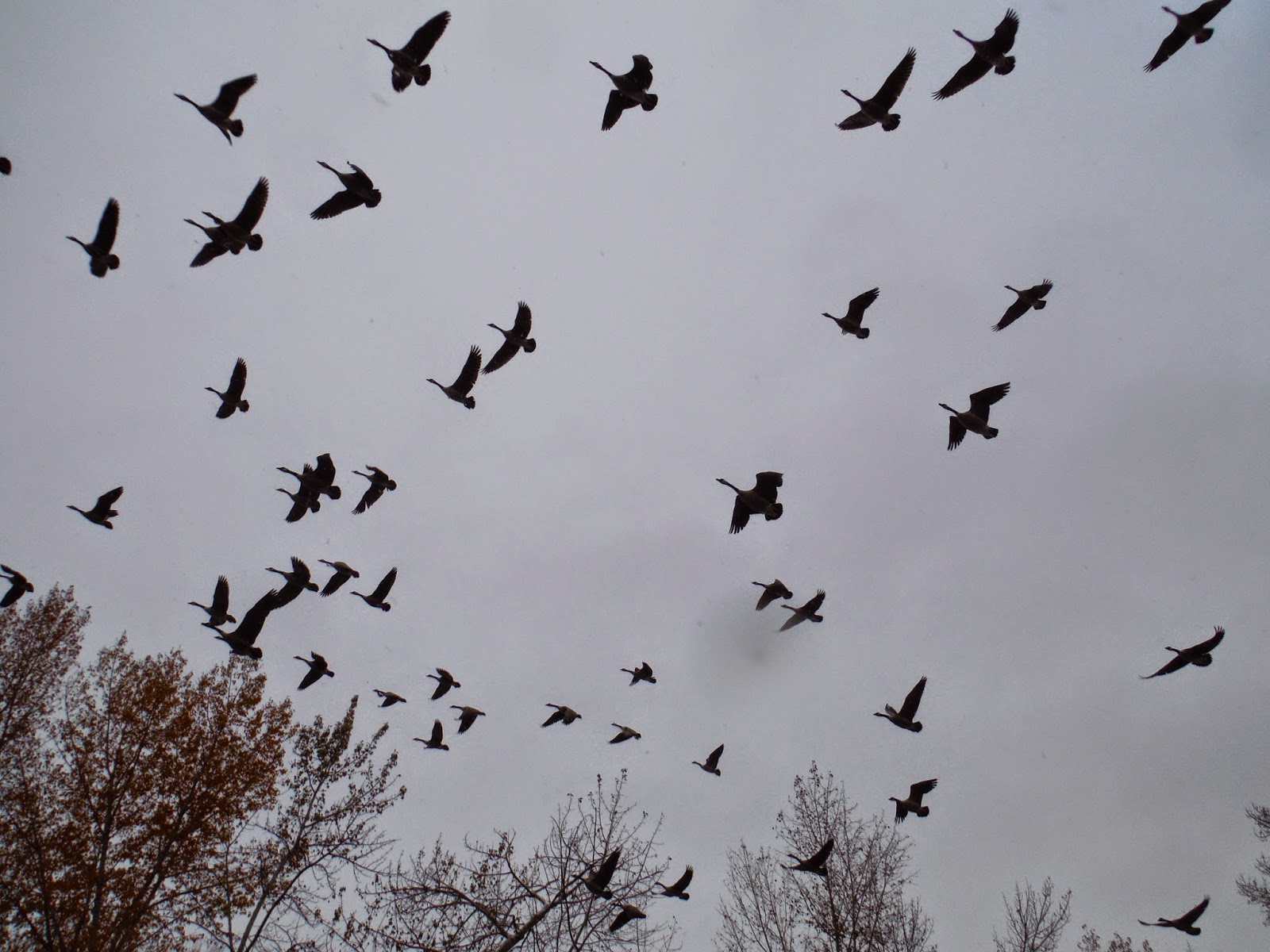 The snow was falling thick with a few inches already on the ground, which made for a great day to take pictures. As the students crossed the river, I noticed that every kid was bundled up as if they were going to spend the night at the North Pole. 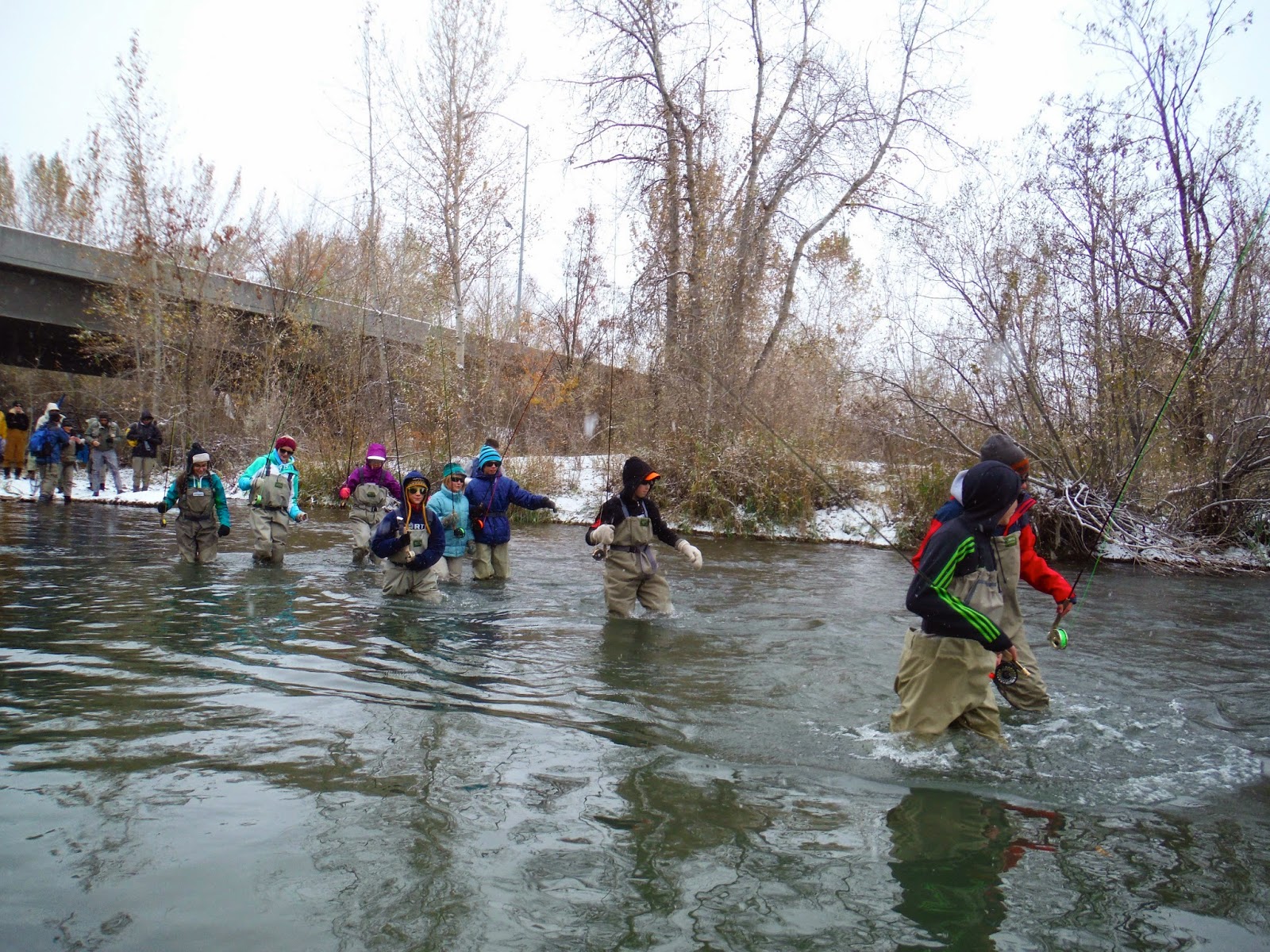 Before fishing today, Shawn, the brains behind the class, lined up the students to receive a gift.  The Women’s Fly Fishers of Idaho spent a few evenings creating designer fly fishing lanyards for each student, and when each received their lanyard, the smiles that spread across their faces could warm the coldest winter day. 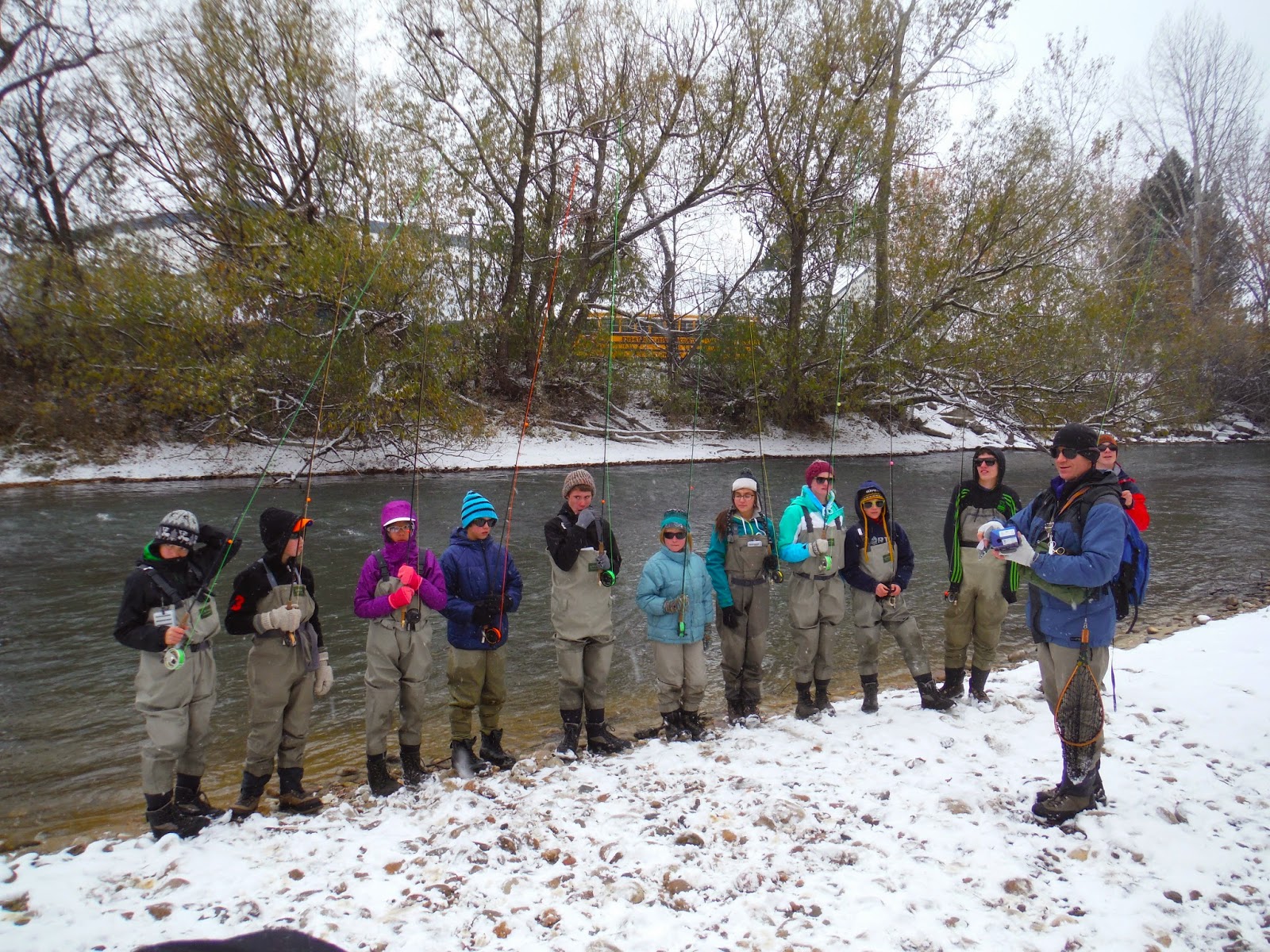 After the quick ceremony, it was time to fish.  John and I had a quick conversation about the recent steelhead planted in the Boise River by Idaho Fish and Game.
“Wouldn’t that be cool if one of the kids got into a steelhead?” I asked John, as we walked to our section of river.
“That would be cool.” John said before we split up and started fishing. 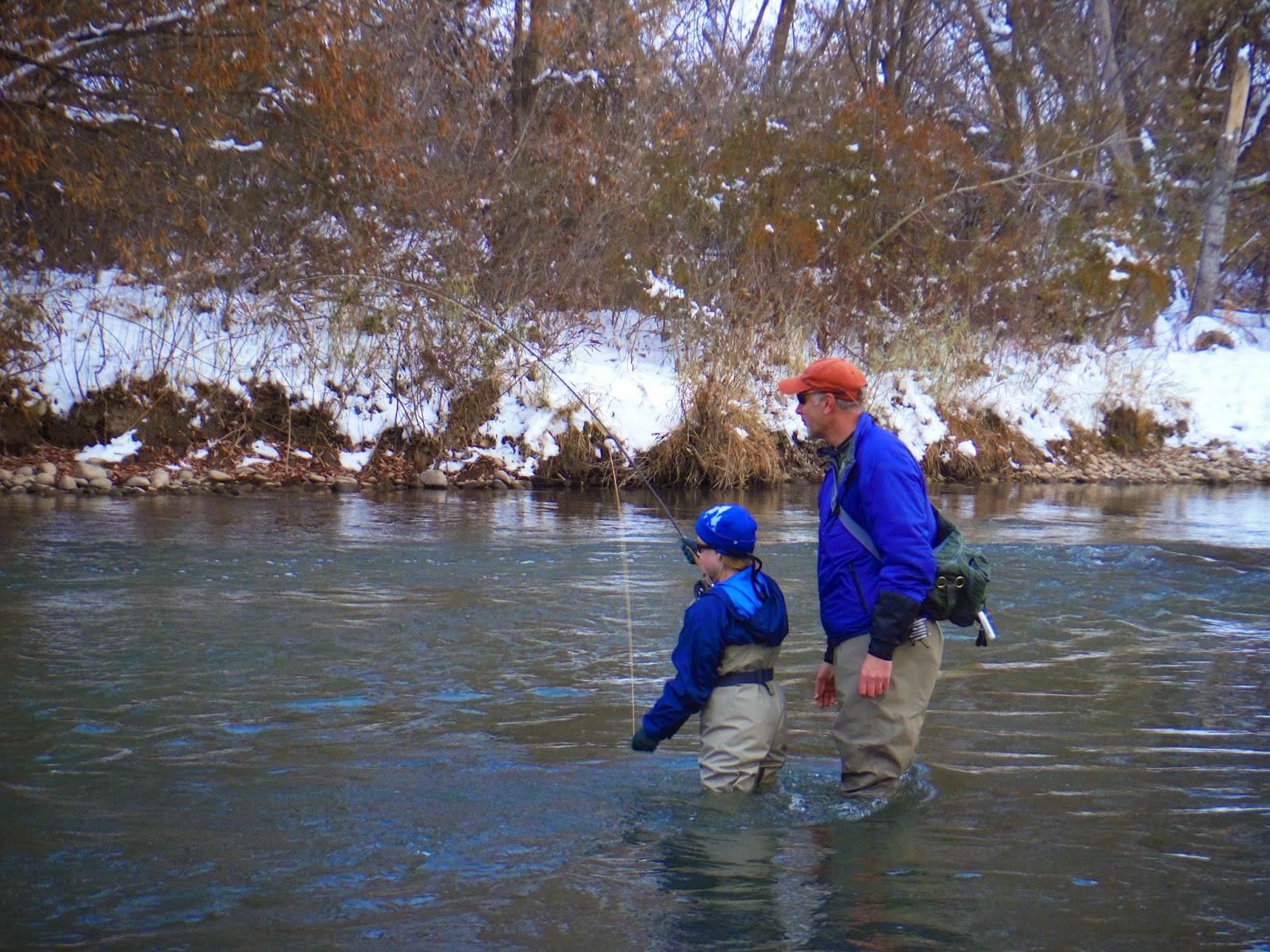 Audrey fished with me first, and after a quick tutorial on how to set a hook she was ready.  Her first fish got away, but the second fish was not so fortunate. Audrey’s indicator went under, and she pulled back on her fly rod to set the hook!
“I got one!” She yelled, as the fish leapt from the water. Normally a jumping fish is a fun thing to watch: the leap from underwater as it breaks the surface, and the splash down that quickly follows. Only Audrey didn’t give the fish time to splash back down.  At first sight of the fish, as it leapt from the water, Audrey set the hook again bringing the fish straight at my face! I felt like Neo from The Matrix as I bent back to avoid the fish hurling towards my face. Though others may say I looked like a seagull that couldn’t fly, as the fish soared by me…
I quickly regained my composure and saw that Audrey was still fighting the fish.  I unhooked my net and scooped up Audrey’s fish, making this the first fish she had ever caught! 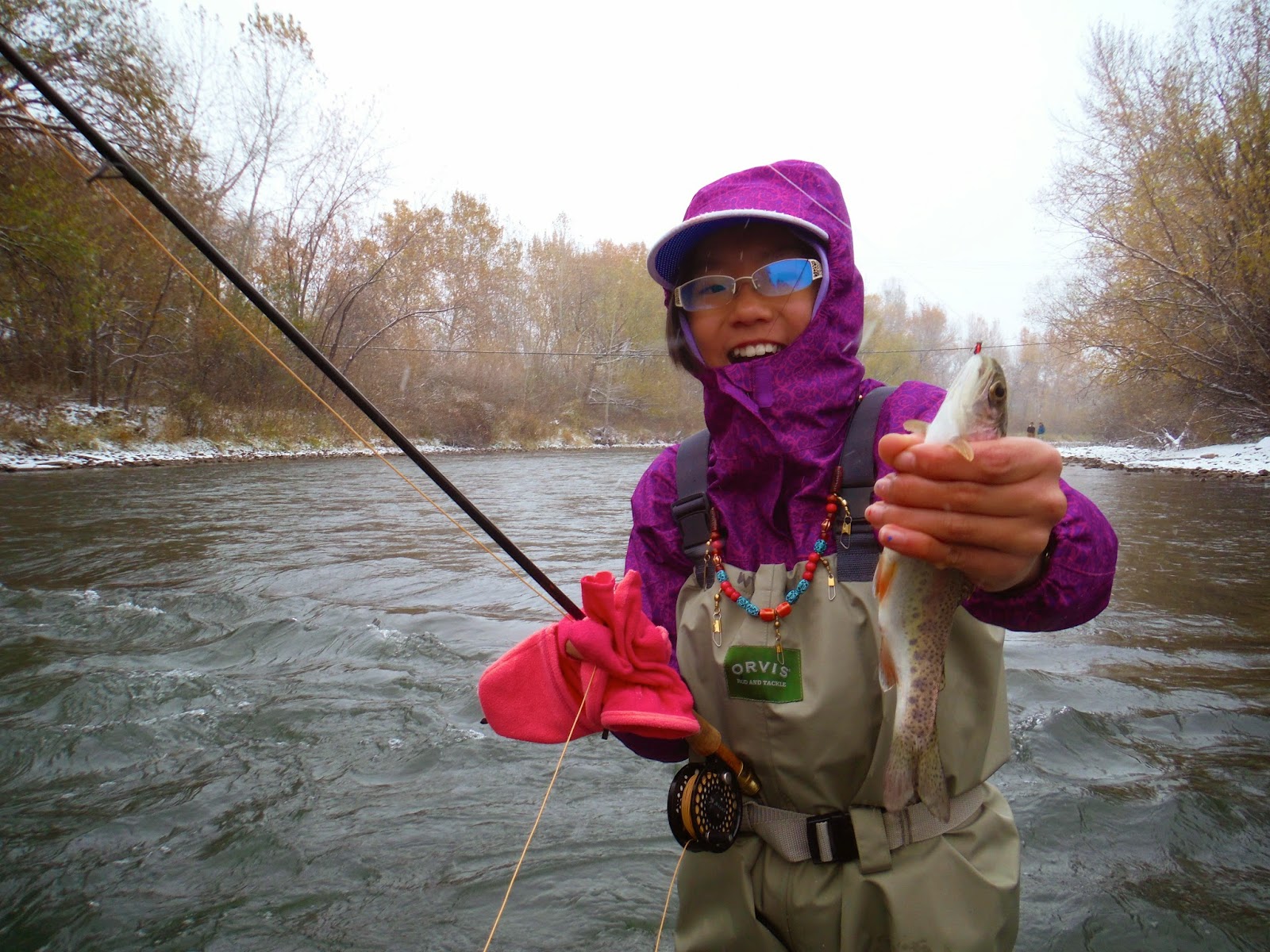 After a few photos, Audrey dipped her trout back into the water and let it go. 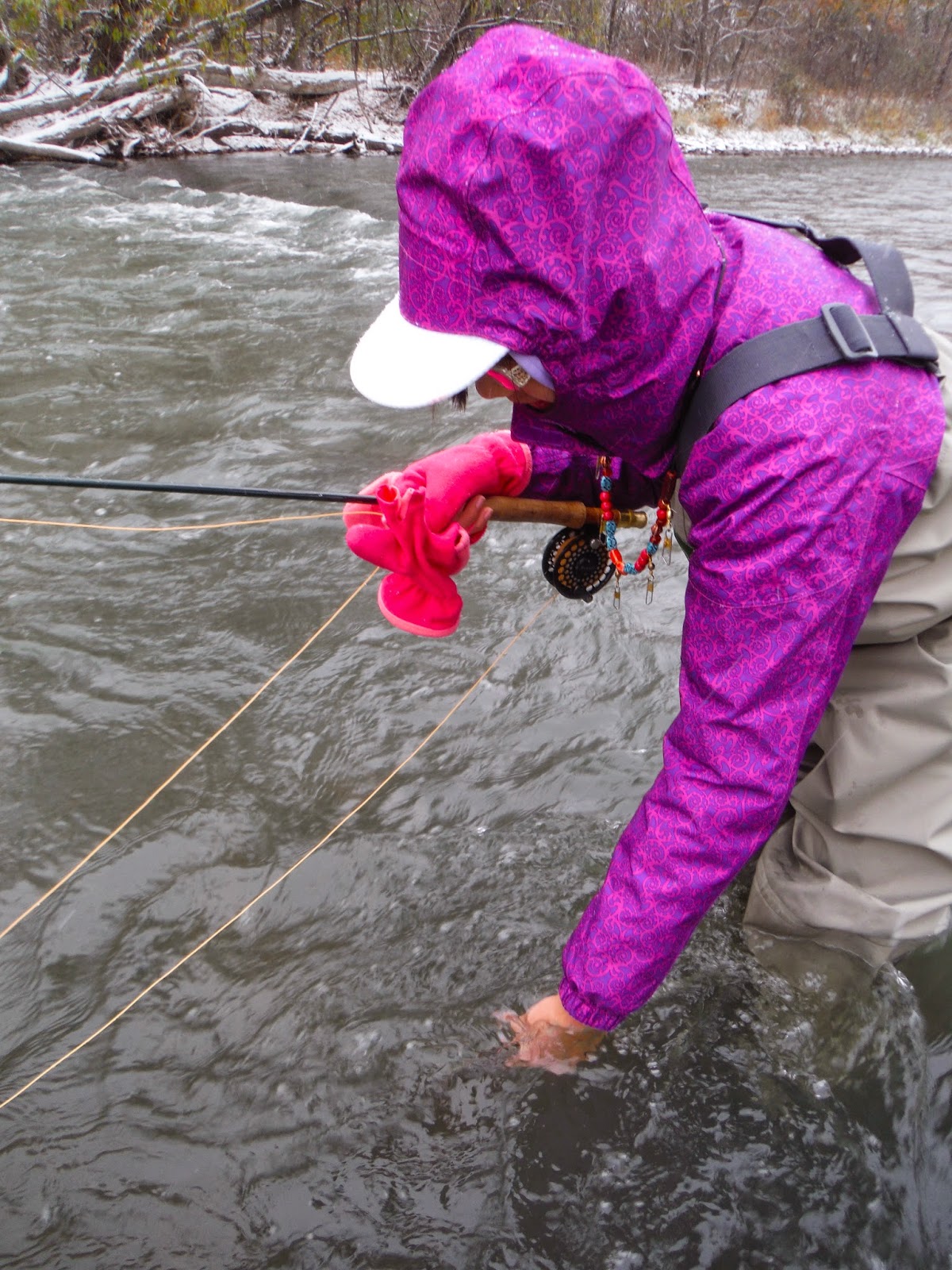 “I can’t believe I actually caught a fish!” Audrey said excitedly. Her dad beamed as he watched his daughter from a short distance.
“Give me a thumbs up.” I said, lifting my camera, and Audrey was happy to oblige. 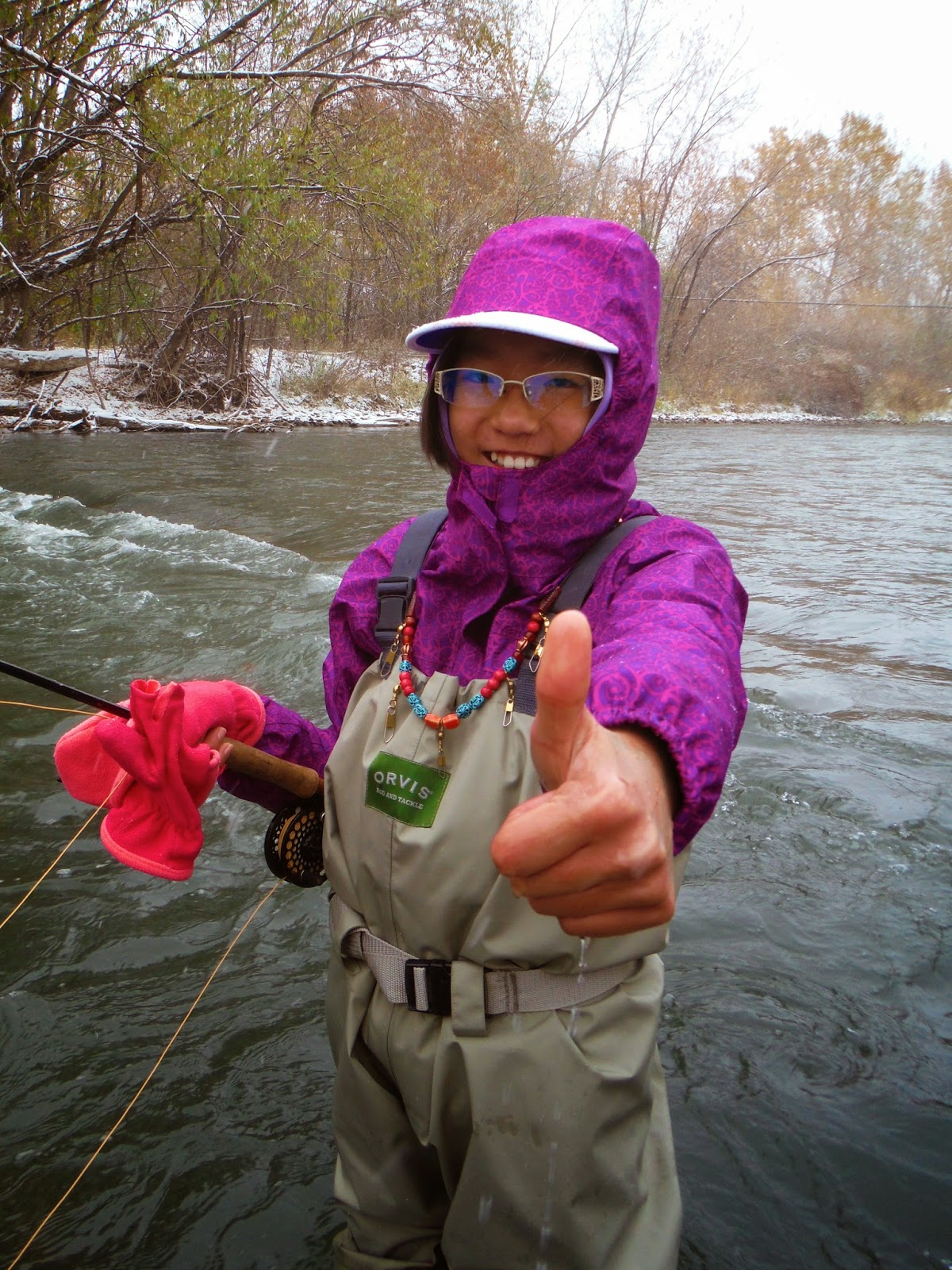 Next to fish with me was Samson, and he wanted a fish so bad he could taste it.  Getting Samson to focus on fishing was a bit of a challenge; I had to lie and tell him that the fish would spook if he talked too much. It worked, but when his indicator went under he didn’t set the hook.
“Samson!” I said, and noticed he was looking away from his indicator. “You had a take!”
“Oh man!” Samson moaned.
“The fish know, Samson… They know when you are not paying attention, so you always have to pay attention.” I explained, and he went back to fishing. 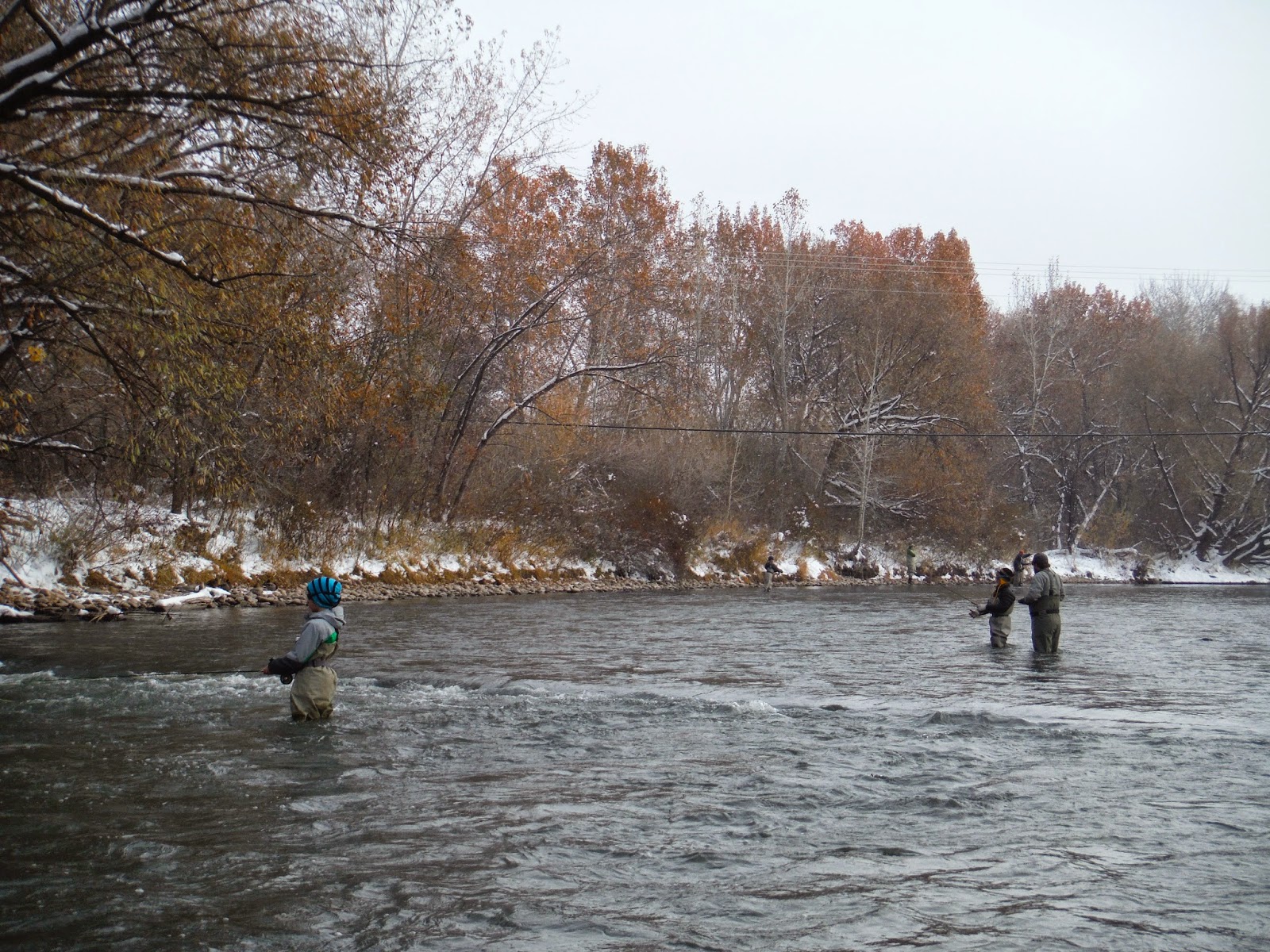 Just downstream from us, Luke hooked into a fish.  I walked down to help, just as Connie netted his catch. 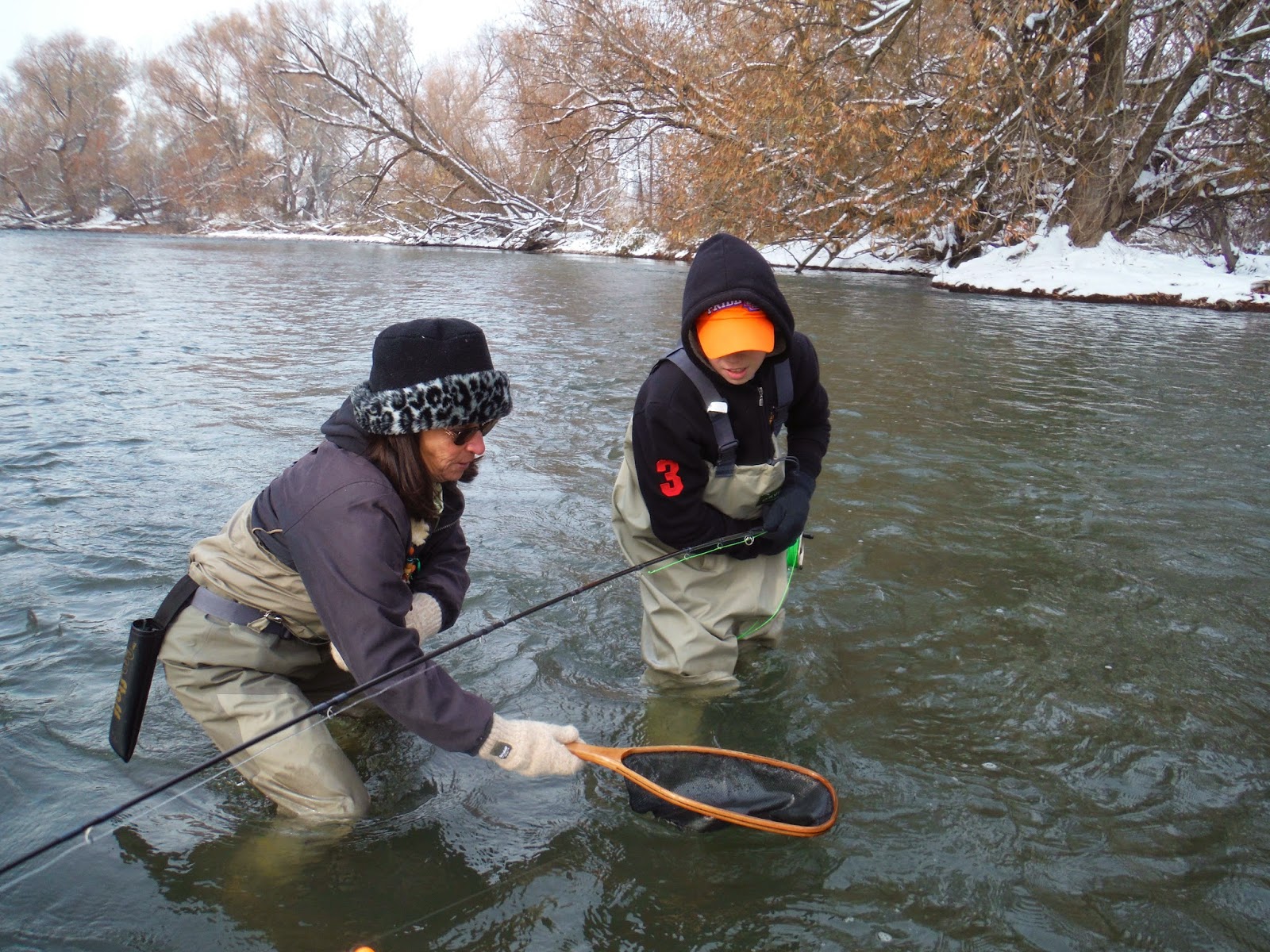 The little white fish Luke caught would not stop flopping. I had my camera ready for a picture as Luke grabbed his fish and held it up.  Just as I snapped a picture, Luke’s fish flopped again, right out of his hand. 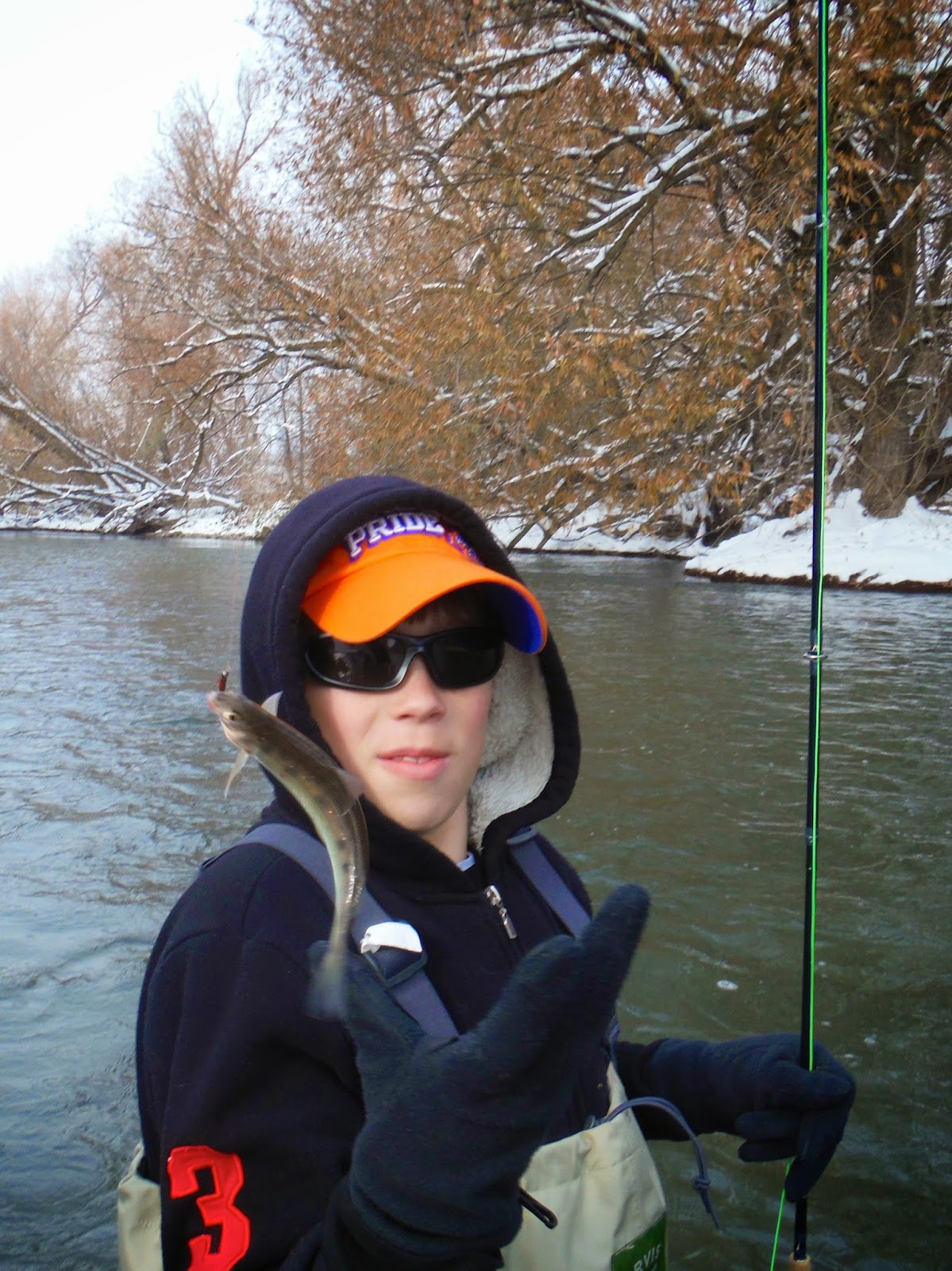 Luke quickly grabbed ahold of his fish for a better picture. 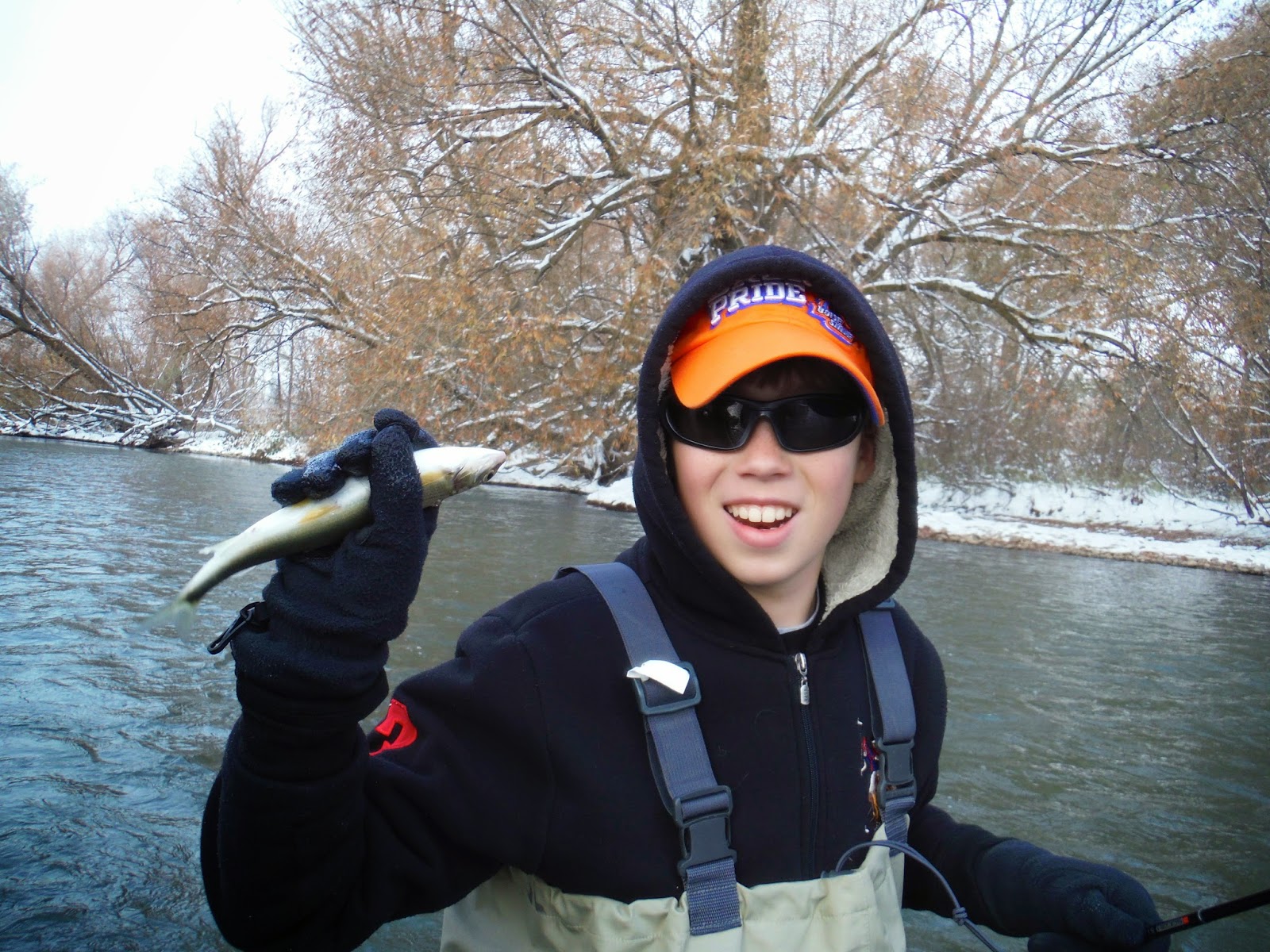 The day was nearly over, and I had walked back to Samson to see how he was doing when I heard a yell echoing from upstream.
It was John, and Brennan, the student he was fishing with, was hooked into a nice fish.
“Beach it!” John yelled, and I saw the fish splash as it neared the shallow water.
“He got a steelhead!” I whispered to myself in disbelief.
“Can we go see?” Samson asked, and we both ran up to see Brennan’s fish.
As I got near, Brennan was doing his best to wrangle his fish.
“Is it a steelhead?” I asked John.  John shook his head no with a huge smile on his face. I looked over to see the fish, and Brennan was holding up a large-scale suckerfish. 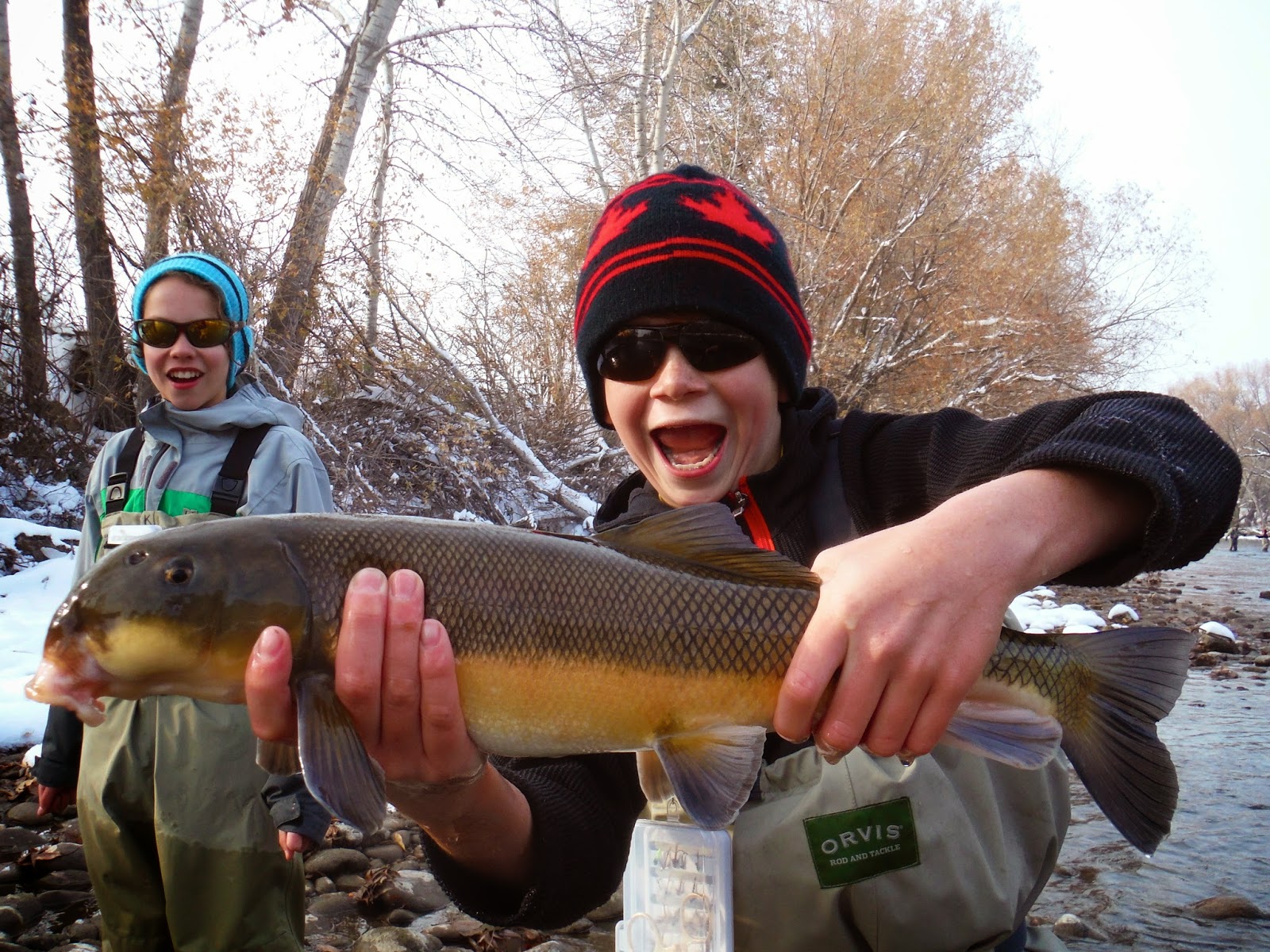 The smile on Brennan’s face was unmistakable.  Sure it was an ugly fish, but it was also the biggest fish caught out of any of the students during this class. Both Kai and Samson gathered around for one last picture with the sucker fish. 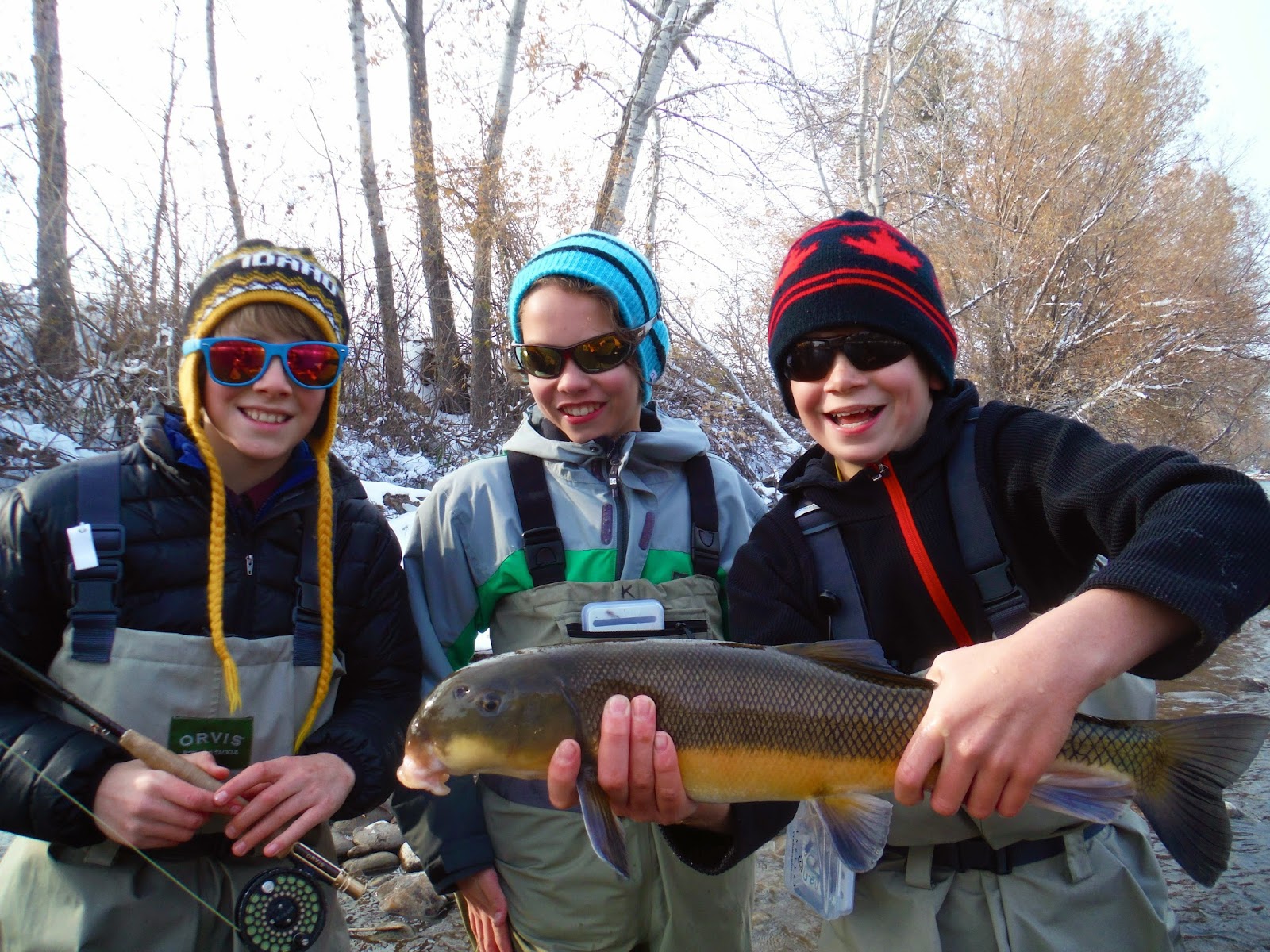 We all stood and watched as Brennan set his fish back into the water, and it slowly swam away.  We walked back to join the rest of the class, and Brennan was reliving his suckerfish experience while the other students listened closely.  I, along with the other volunteers, were laughing about the memories of the class: fish being caught, kids falling in the river, fish being flung in our faces. We laughed and said our goodbyes as the kids filed out and handed in their fly rods for the last time. 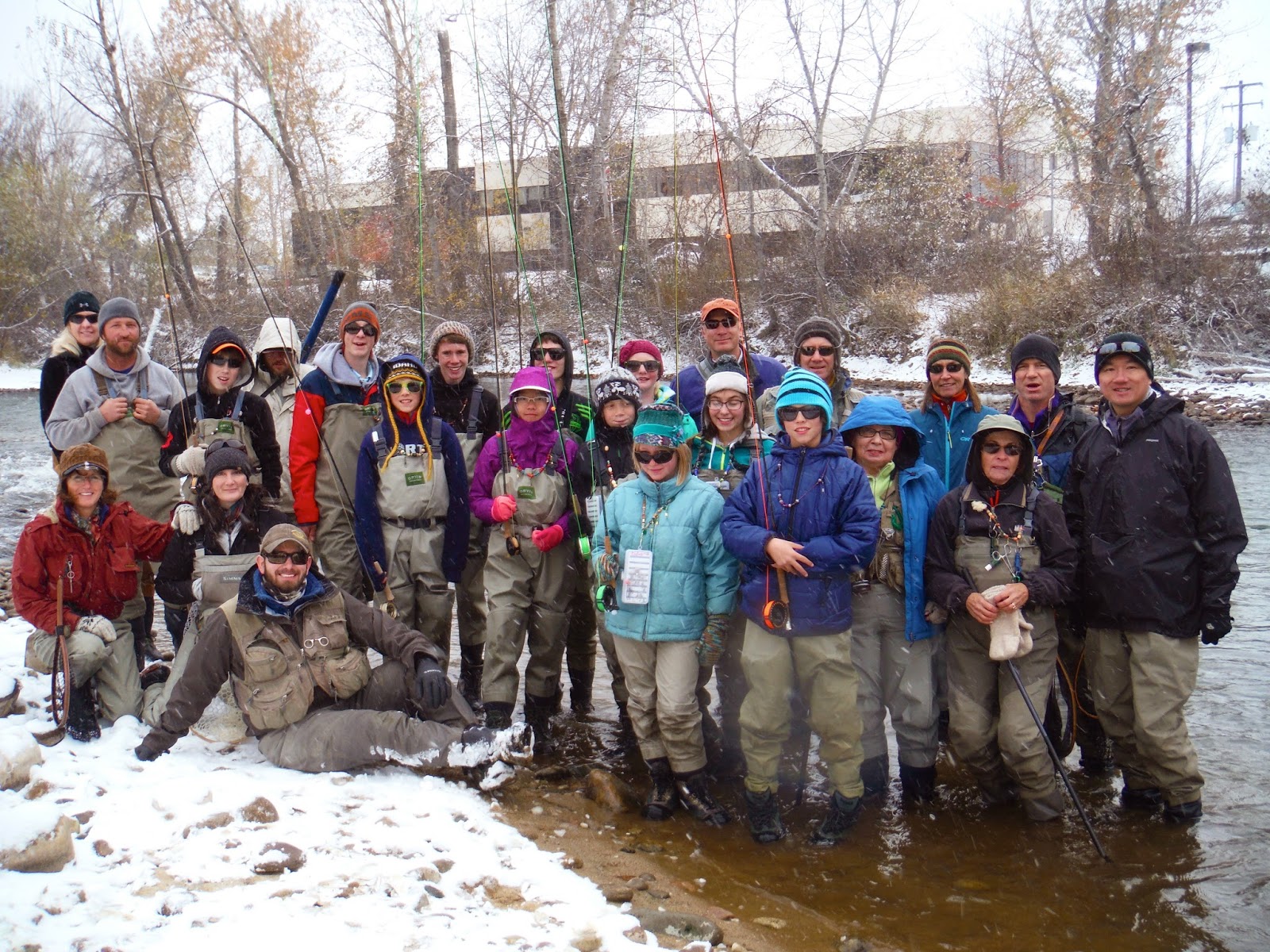 1 thought on “The Poop Pipe”