Skip to content
The first fishing trip of the New Year is always a good one!  This year I was joined by Mr. Stillwater himself, Phil Rowley.
“What time do you need to pick up Tom Rosenbauer today?” Phil asked, making sure I was staying on track this afternoon.
“Tom’s plane was delayed; he will not join us on the river today.” I said back.
“That’s great!” Phil said happily.
“What?” I asked with a chuckle. “He’s stuck in an airport an extra 7 hours now!  How is that great?”
“Well, no.  That’s not what I meant…” Phil said, back-pedaling. “Now we can fish the entire time, and not have to worry about picking up Tom.”
“Only thinking of yourself… that’s the Phil Rowley I know!” I said jokingly, yet adding to Phil’s guilt.
“Oh, be quiet!  You are just trying to make me feel bad.” Phil said, chuckling.
“Are you here yet?” Phil asked.
“I’ll be there in just a sec.” I said, and pulled into Pete’s Erickson’s driveway where Phil was waiting, and we quickly made our way to the Boise River. 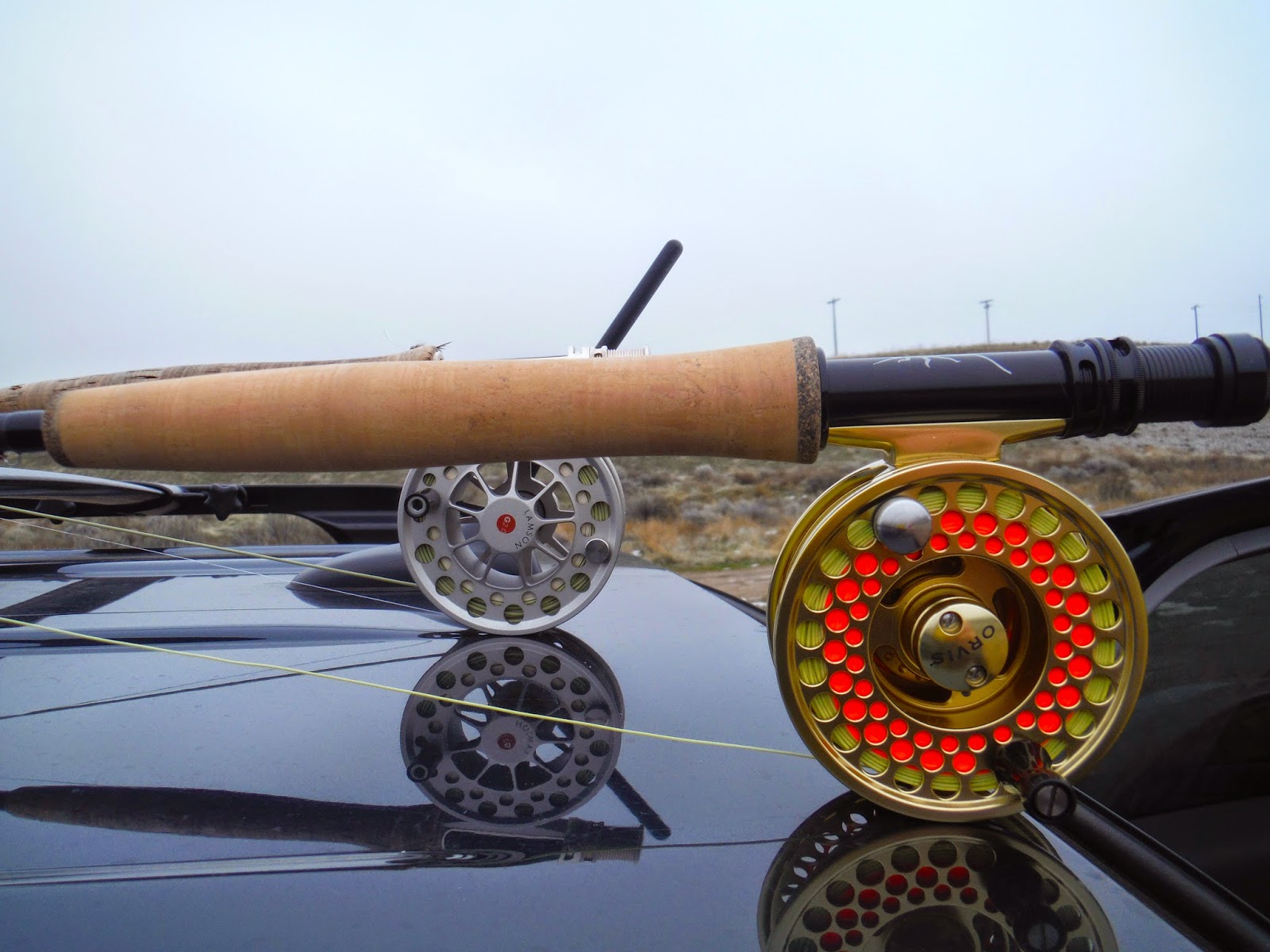 “Pete said he would join us after he gets off work.” Phil reminded me as we grabbed the rest of our gear and headed towards the river.
“This is the path?” Phil asked, as we stood looking down the steep decline. The previous precipitation had muddied up the steep trail and after one step down, Phil’s boots started slipping from under him.
“NOPE!” Phil said, turning back to crawl away from the slick trail. I quickly pulled out my camera, just in case Phil slipped.
“I hate you!” Phil said, as he climbed back to the paved walking path. 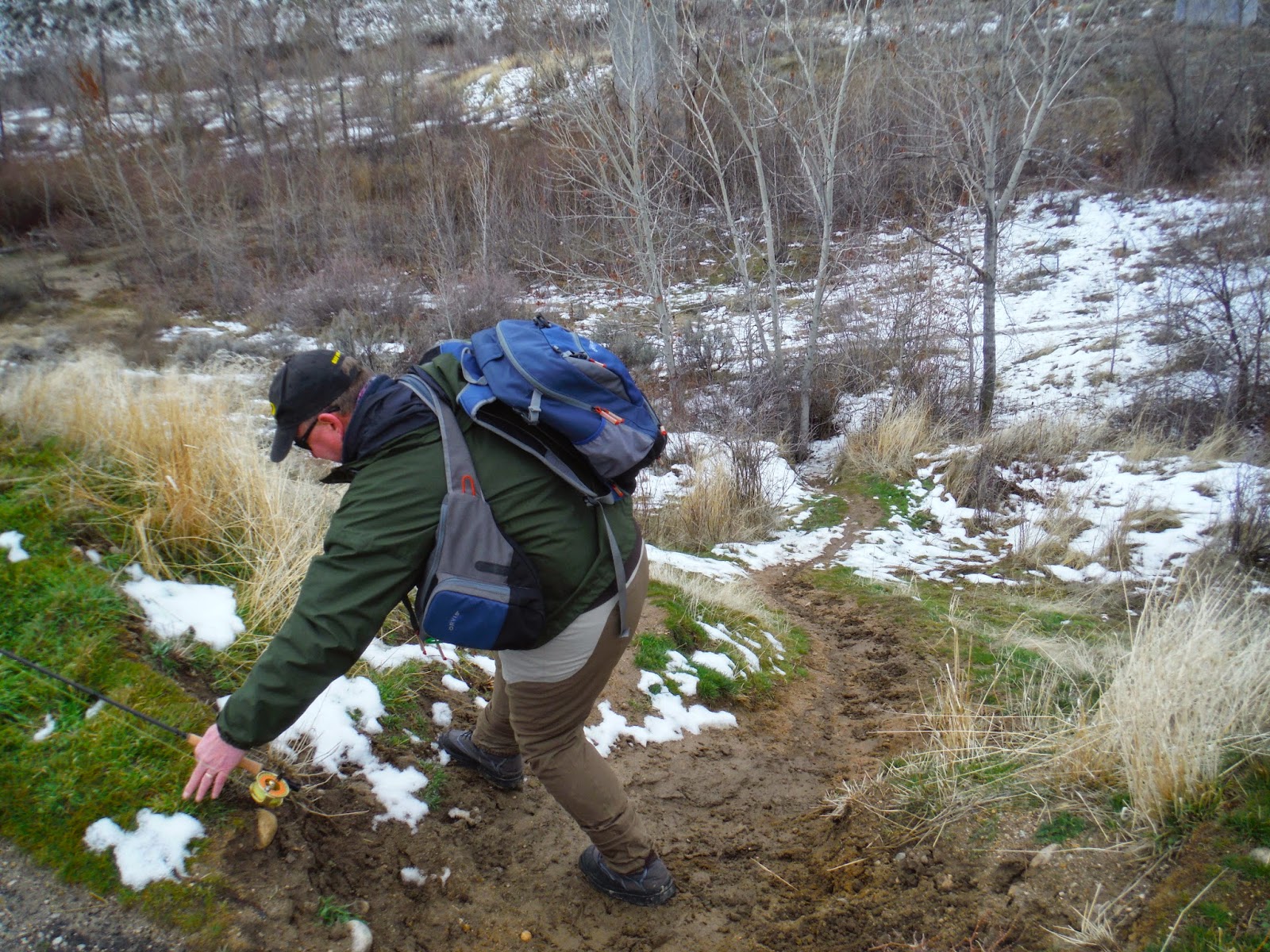 We eventually found a path that was not as steep and made our way down to the river.
“Why do you have that backpack?” I asked, as we got into the water.
“It has my cameras in it.” Phil replied, setting it down on a small rock island in the middle of the river where he could keep an eye on it and still fish. 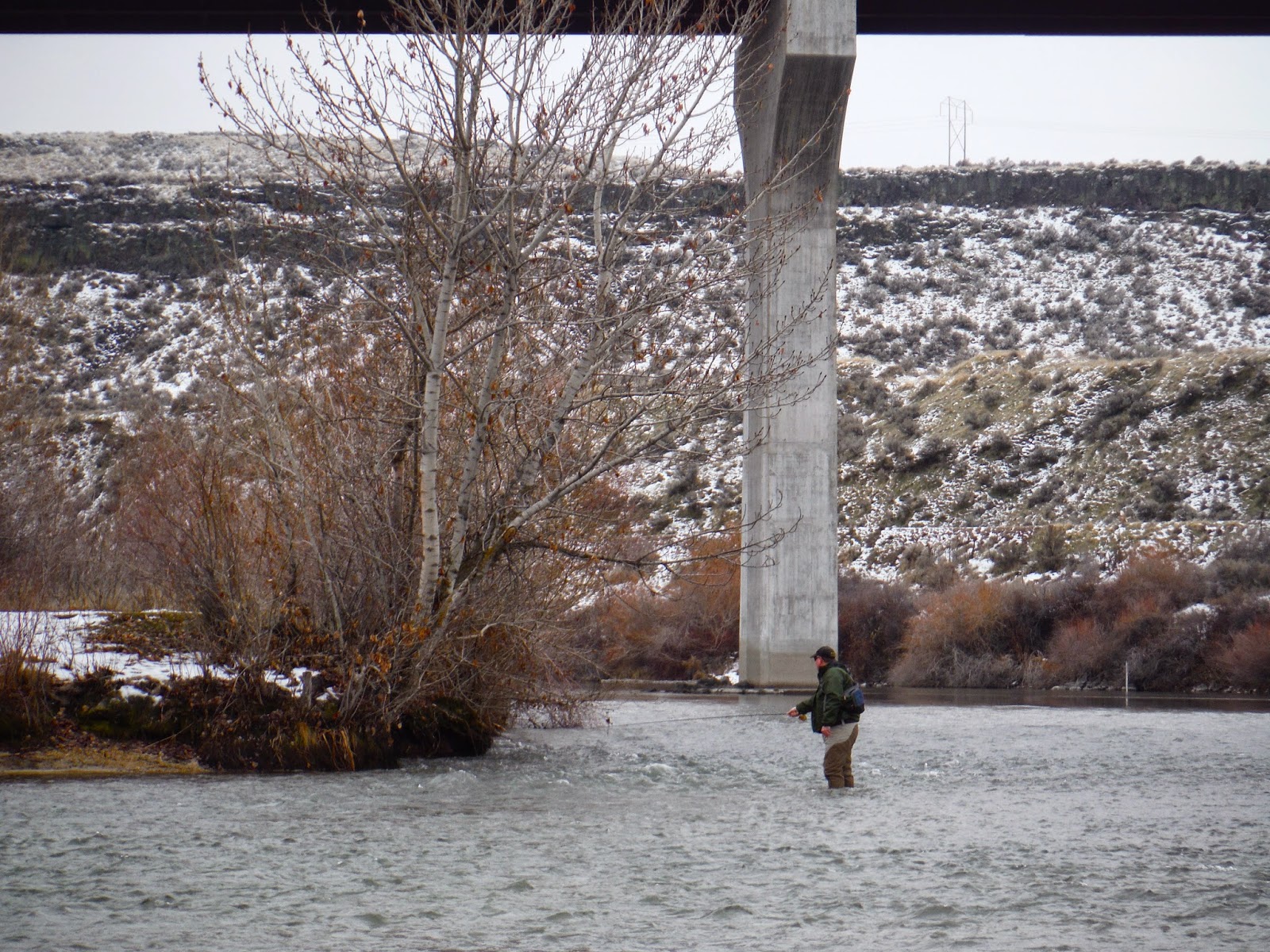 The water was a bit cloudy today due to the fluctuation of flows from the dams upstream. Despite the adjusting water flows working against us, we started to fish. With the rig Pete Erickson taught me, I slapped my flies into the water, and it wasn’t long before my orange slinky sprang to life!
“First fish of the year!” I yelled over to Phil, who looked over and offered a few hollers of approval. I netted the fish quickly, and saw that it was not the prettiest white fish in the river, but it was my first fish of the year.  That’s worth a picture, I thought, and snapped a shot before dumping my fish back into the water. 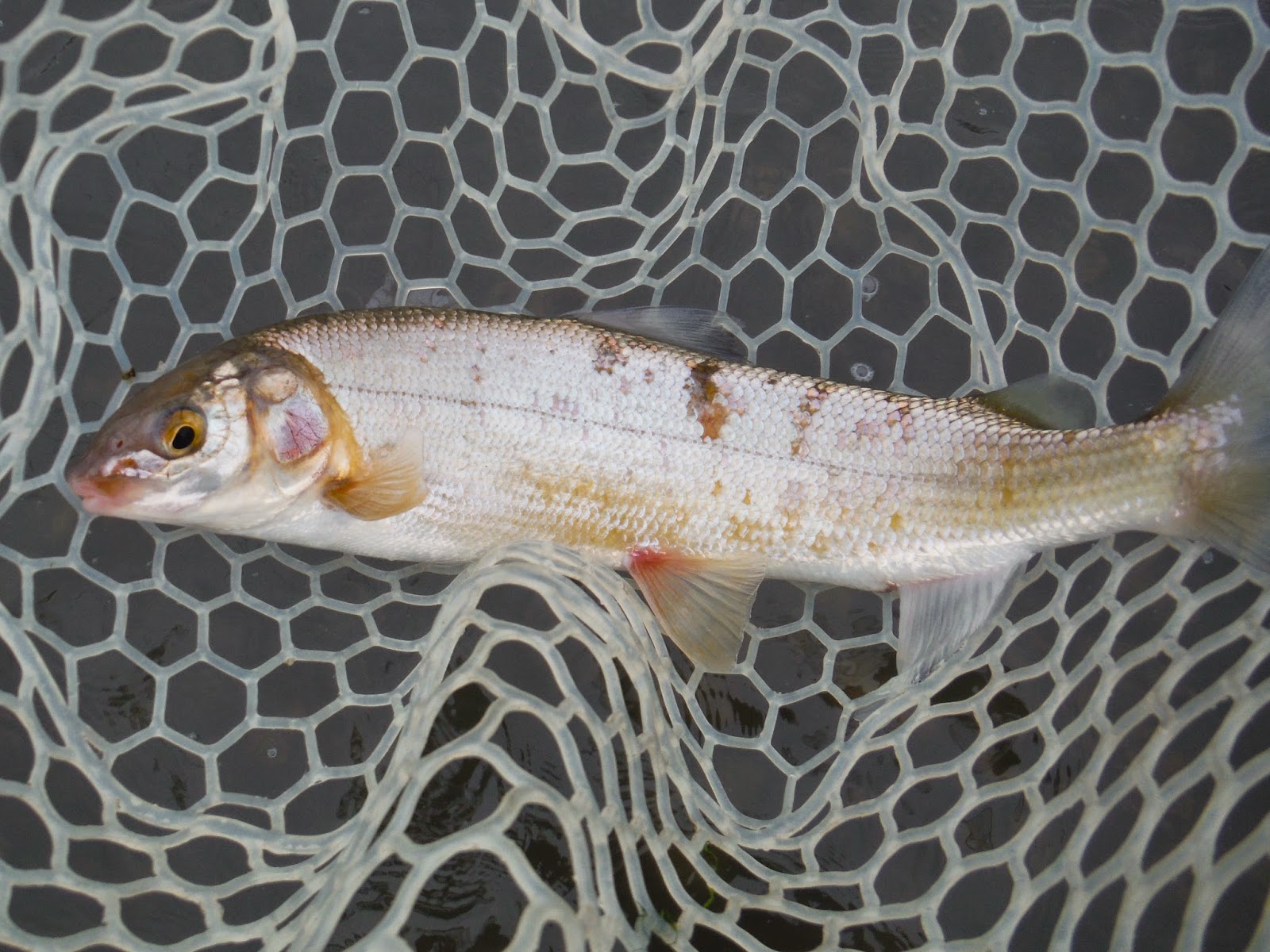 Both Phil and I walked to a different section of the river that also looked promising. The small, picture perfect pools and tail-outs where we fished were not providing us with any luck. 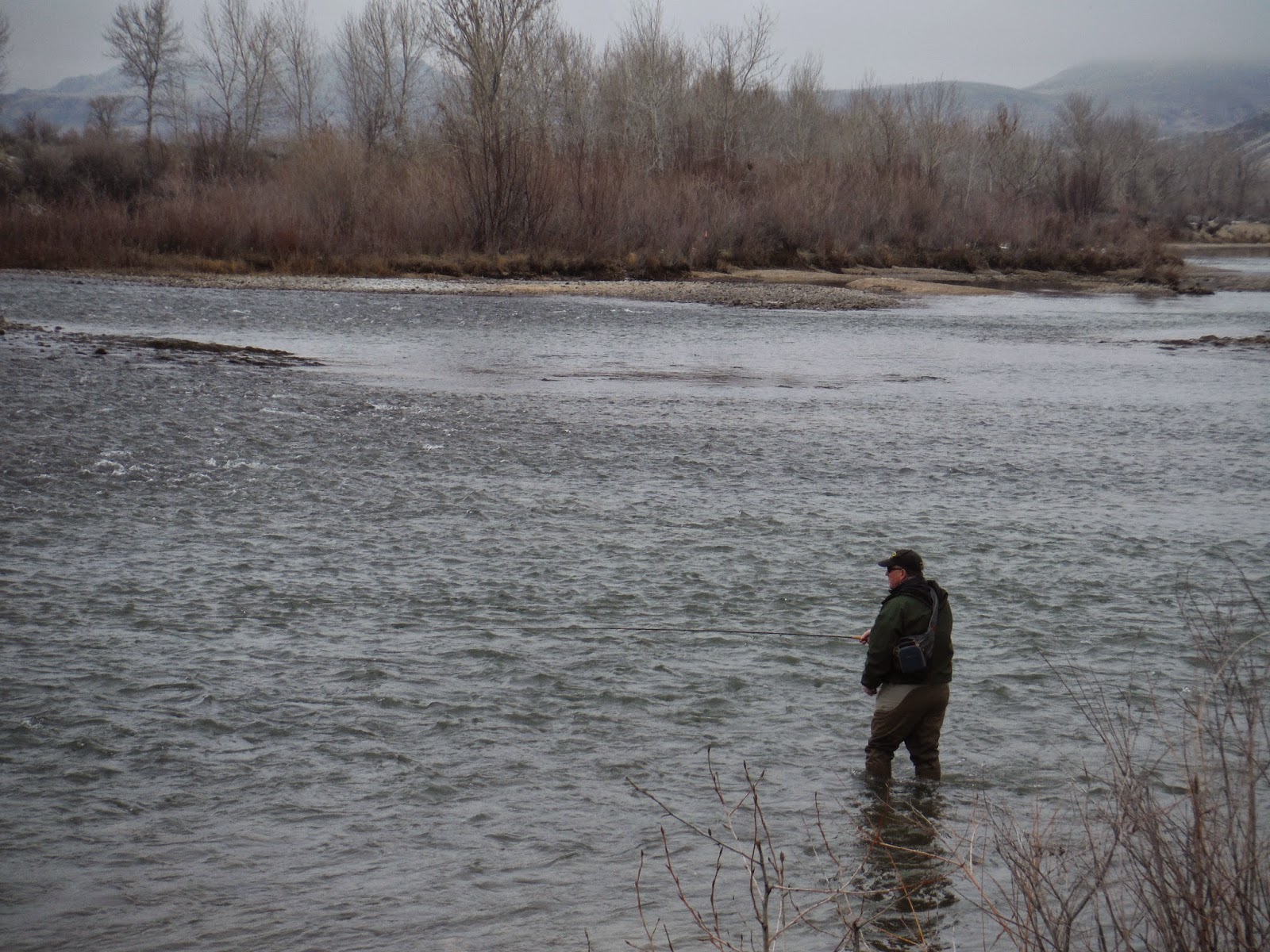 “It’s not too bad out here.” Phil said.
“Yeah, I was expecting it to be colder.” I said, looking at his back pack that held his cameras.
“Are you going to take any pictures?” I asked.
Phil laughed. “I lugged that thing down here only to realize that both batteries in my cameras are dead.”
We both had a chuckle about that, but with the way catching was going today, the camera picked a good day to be dead. Pete was almost off work, and we only had two white fish to speak of. As I took a few steps upstream and started fishing the faster water, my slinky stretched out as I led my flies quickly downstream, and I set the hook fast!
“It’s a ‘bow!” I said happily.
“I hate you.” Phil said, as I netted my fish and took a quick picture of the first rainbow of the year. 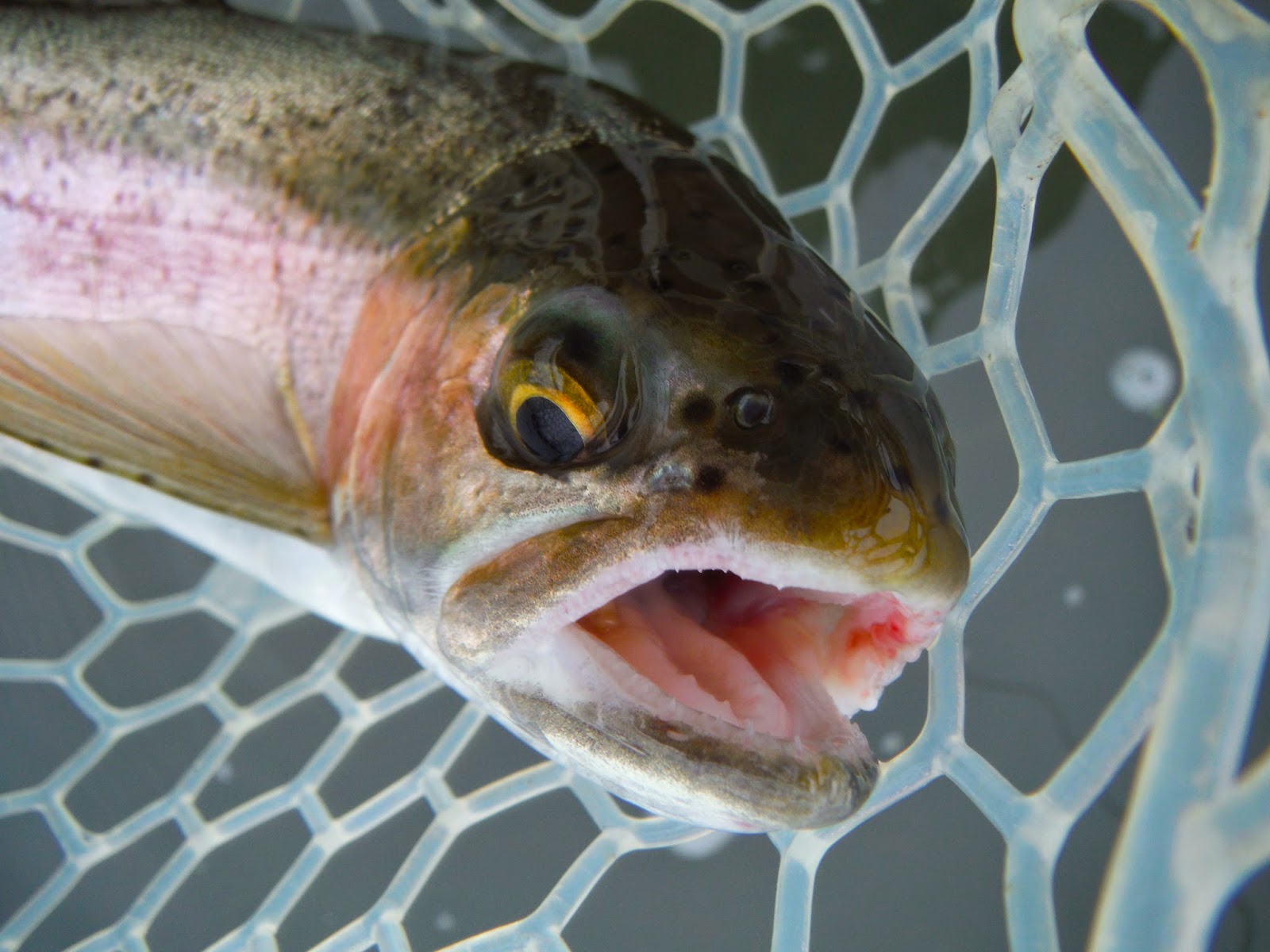 Together Phil and I headed back up to the parking lot, where we met up with Pete Erickson to fish a different stretch of the Boise River. 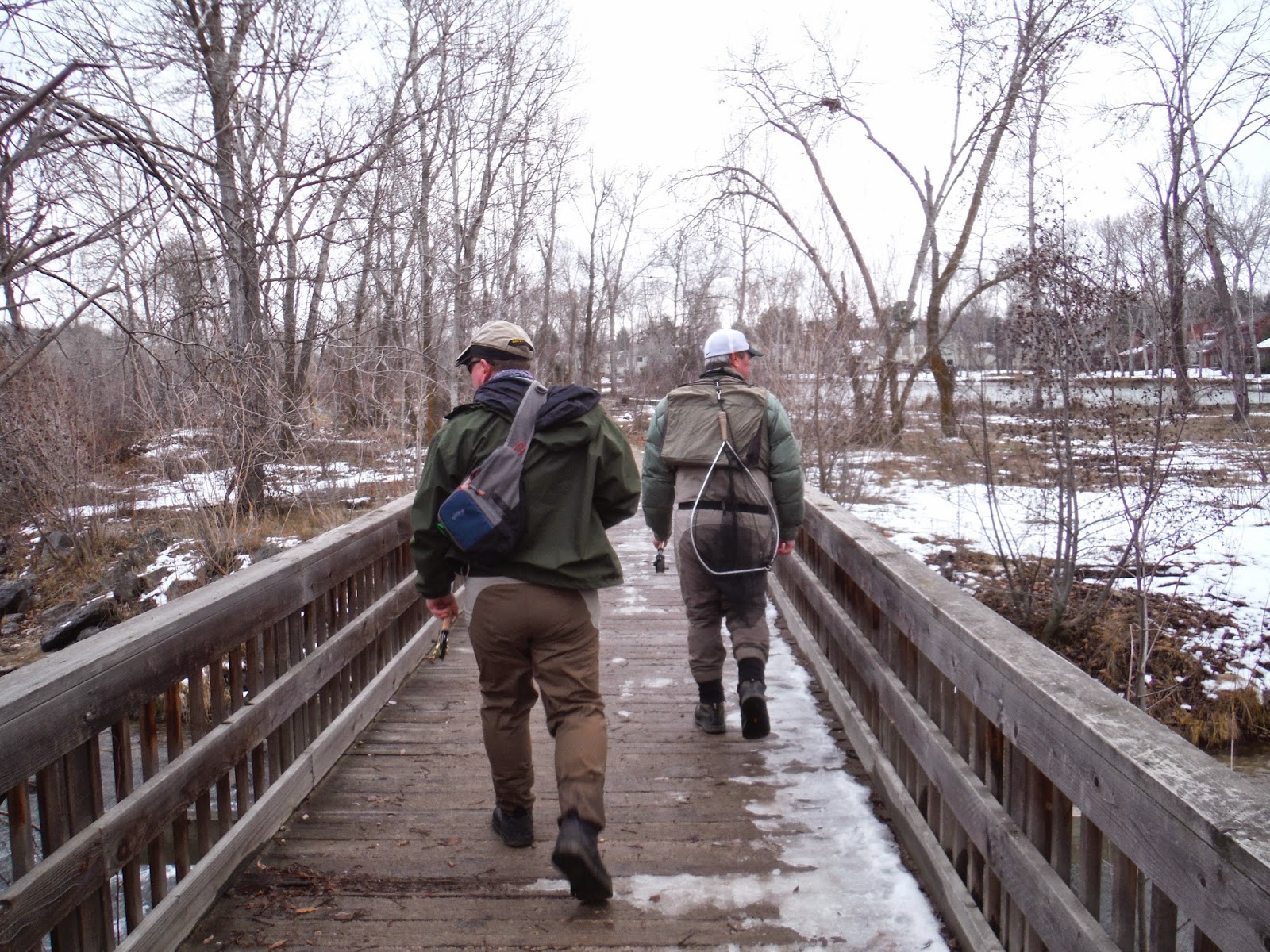 “Here, Phil, put on this hat.” Pete said, handing Phil an Oregon Ducks hat.
“Well I like my hat!” Phil complained, putting his hands up to shelter the hat on his head.
“Well, I’m going to write a blog for Echo, and they would kill me if I sent in pictures with someone else’s company’s hat.”
“But I like this company, and this company likes me.” Phil said, making things difficult for Pete.
“Just…” Pete said, taking the Ducks hat and tossing it at Phil, “Put this on!”
Phil caught the hat, and said, “Okay, but I’m not taking off my hat.” Sure enough, with Phil’s hat still on, he placed the Ducks hat right on top.
“There, that’s the best you’re going to get!” Phil said with a smile.
“Go Ducks!” Pete said with a smile! 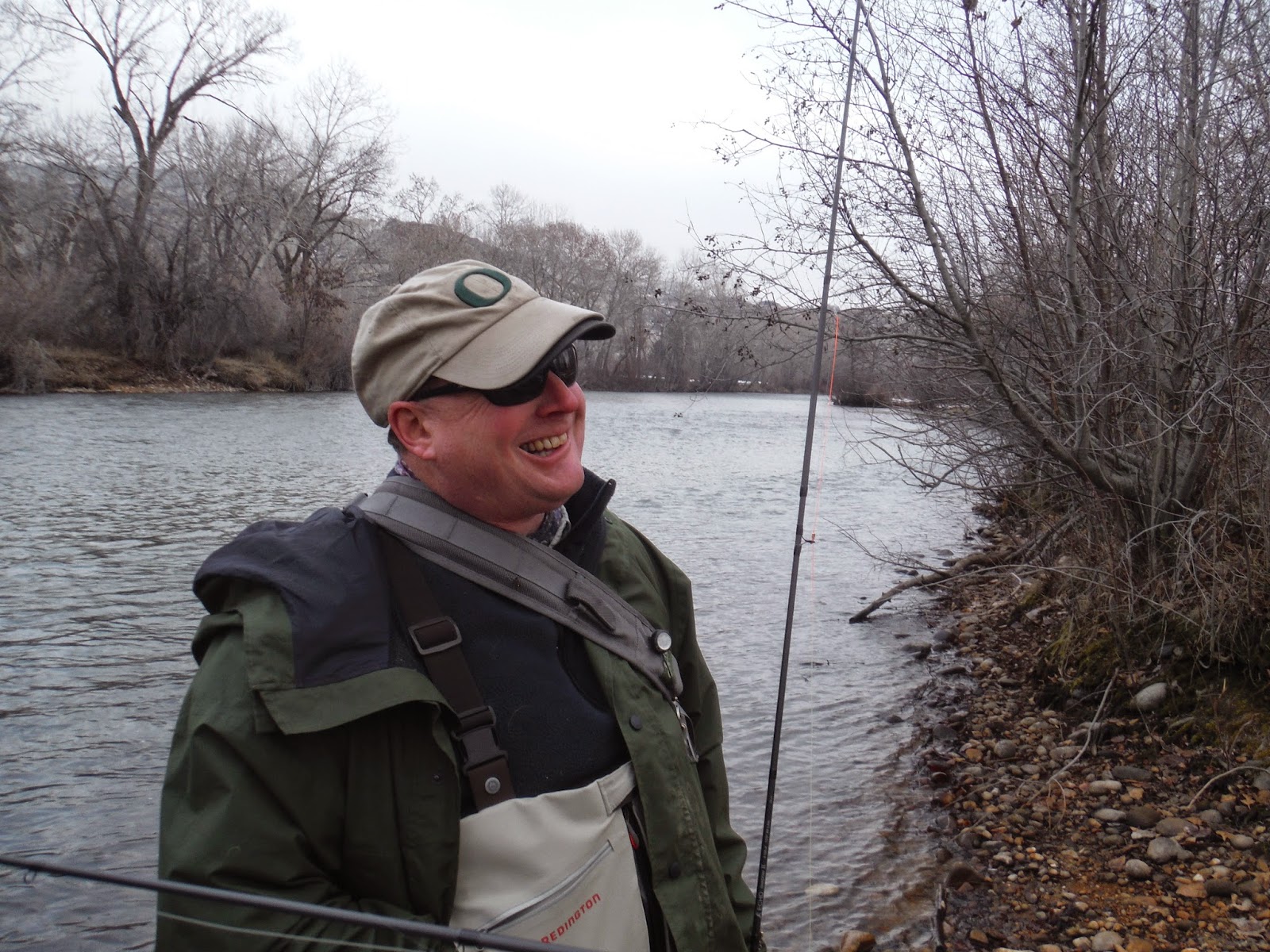 If we thought the river was off-color where Phil and I had fished prior to meeting up with Pete, it was nothing compared to where we were now.  There was a definite stain to the water that was frustrating all three of us, but I stood upstream as the two fishing masters euro-nymphed a promising riffle. 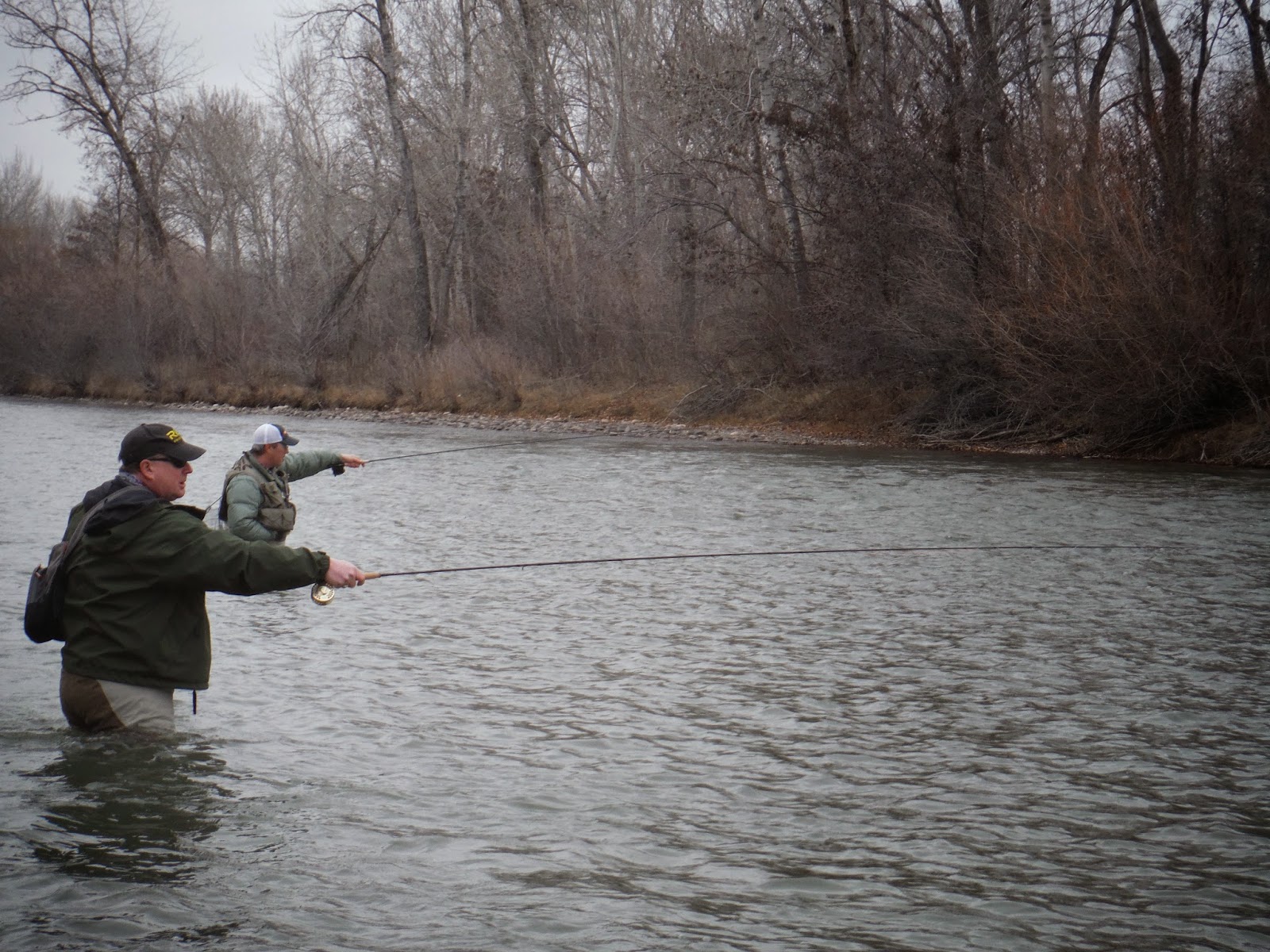 Finally, Phil’s slinky sprang to life, and he set the hook! As his fly rod shot up, a large stick shot towards him.
“Another damn stick!” Phil yelled, not happy about his catch.
“The next guy that fishes here will thank us, because we are cleaning out the river for him.” Pete said, and he was right.  This had to have been Phil’s tenth stick, and Pete and I were easily catching up.  Still, the three of us together can make light of anything, and Phil was happy to hold up what he called ‘the biggest stick of the day’. 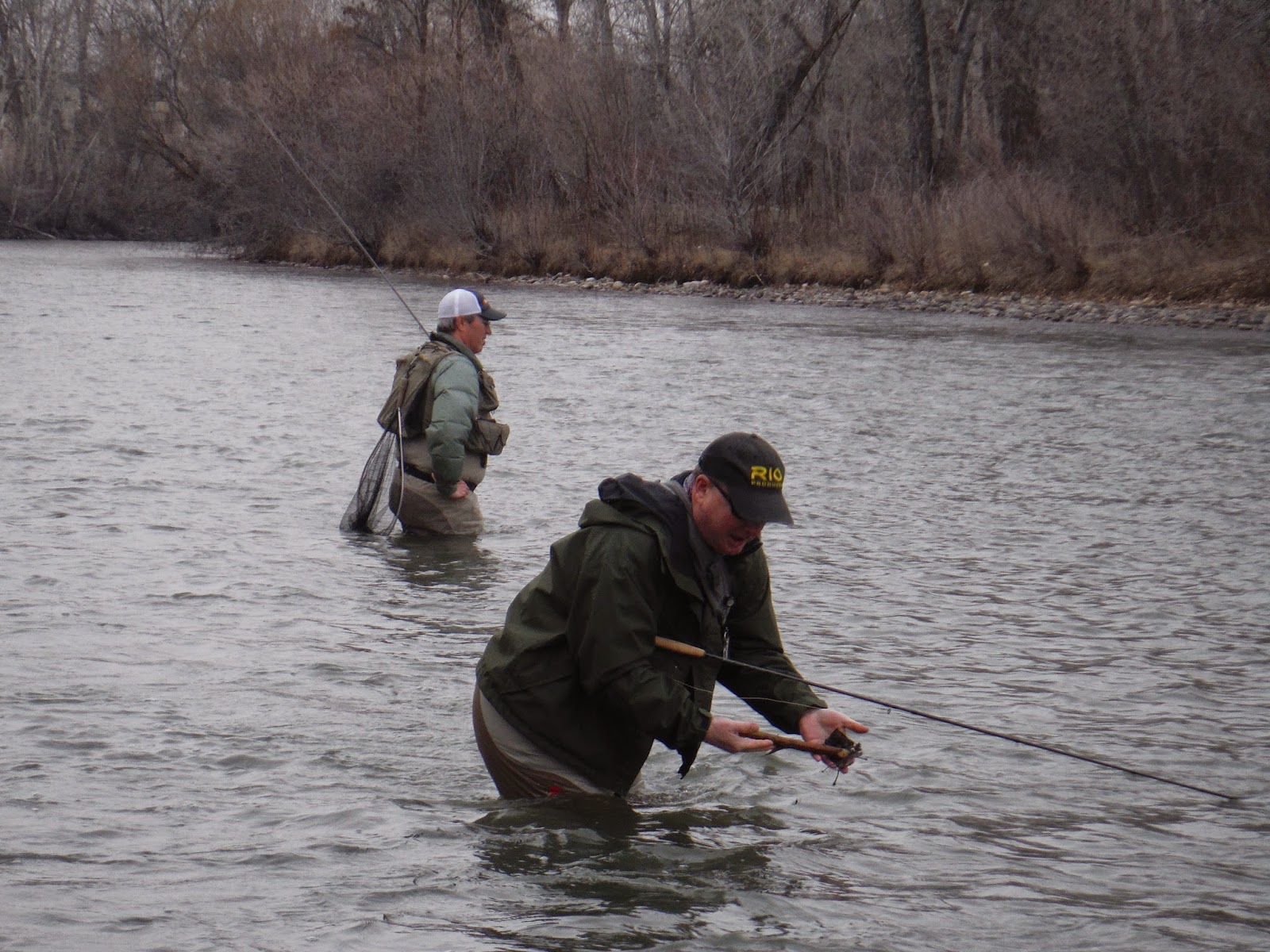 “I just want to catch a fish so that I can brag to my friends in Canada that I caught a fish in January.” Phil said, as he released his stick.
The day was fading fast and the temperature was right alongside. It was nearly time for me to get going when I heard yelling from upstream,“Got one!”
It was Phil, and sure enough this time it wasn’t a stick! 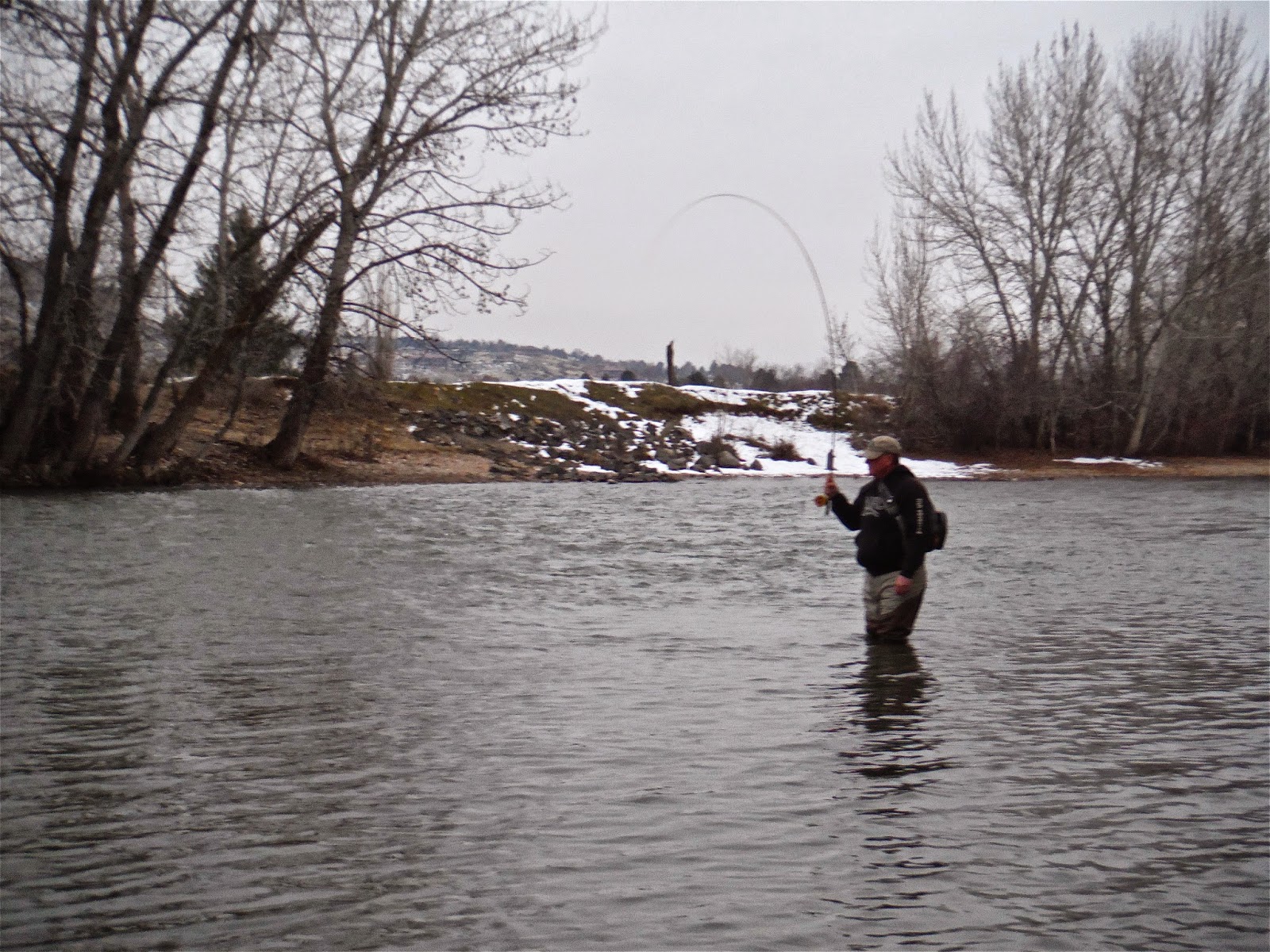 I bolted upstream in full sprint where Phil was backing into the slower water, reeling in his fish.
“It’s a brownie!” Pete said with excitement, as I brought out my net to land the fish.
“You got the big fish of the day, Phil!” I said as I handed him the net, and brought out my camera for a picture. 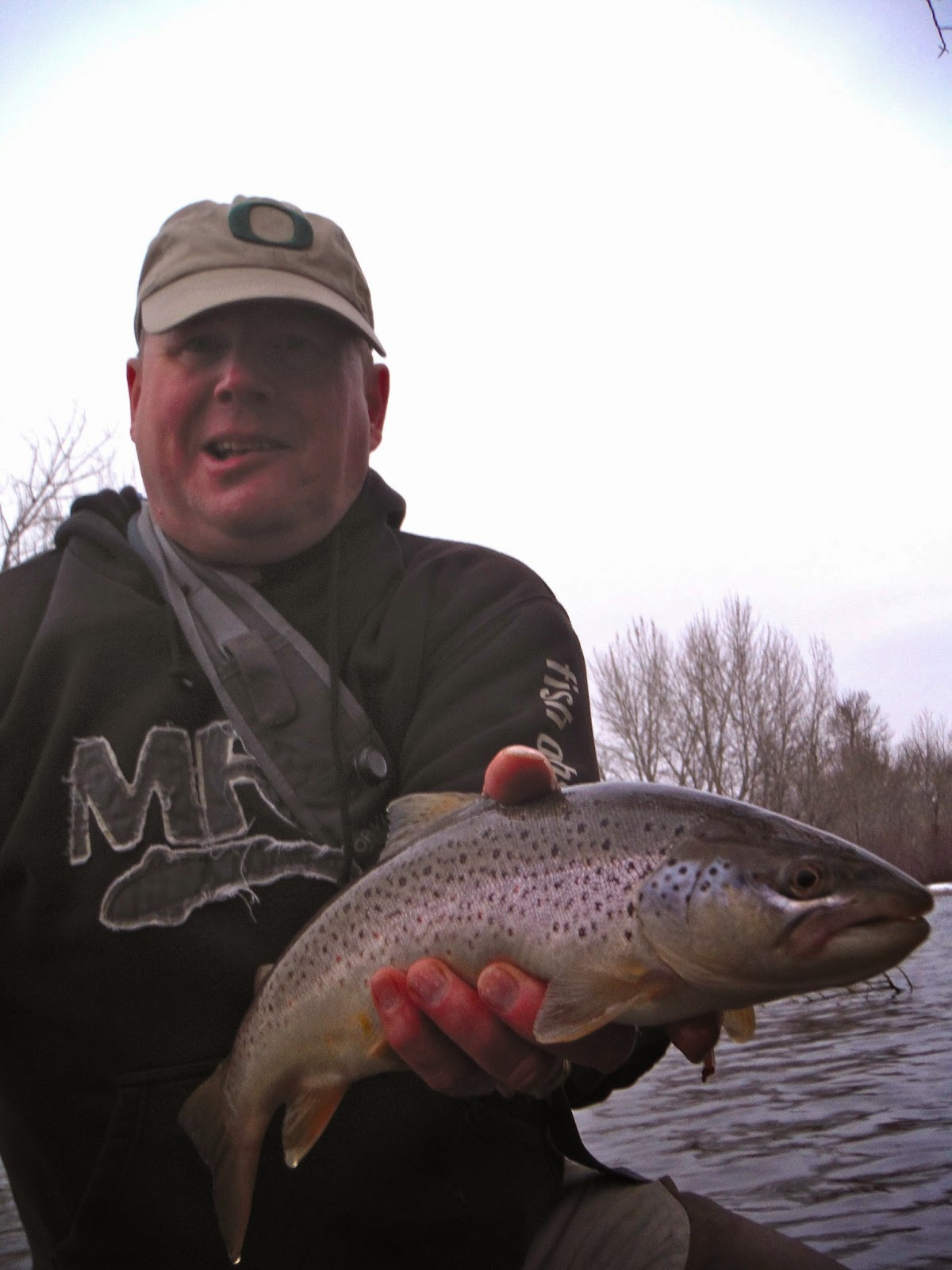 Phil dipped his fish back into the water, and it slipped from his fingers to return home.
“Sweet, Man!” Pete said to Phil, as he stood up.
“I can say I caught a fish in January!” Phil said happily, before we all made our way off the river to end the first day on the water for 2015.