Skip to content
“Well, your stock just went up, my friend!” John Stuckey said to me with a smile, because not only did I honor his 5 a.m. meeting time, I was there just before he arrived, waiting.
“You know me, Stuckey!” I said back with a smile and a firm hand shake.
“They’re calling for a 19 degree weather day.” Stuckey said, dropping his voice a octave lower, and a bit more serious.  It was true, a 19 degree day was the forecast for the Little Salmon River, but it would take a blizzard to keep us from steelheading. And we would most likely fish in a blizzard just to say we did! This is the kind of crazy mentality steel-headers get, especially guys like myself and Stuckey, who won’t let a little cold keep us from the water.
“I wouldn’t expect anything less!” I said, and three hours later we were geared up and fishing for steelhead on the Little Salmon River. 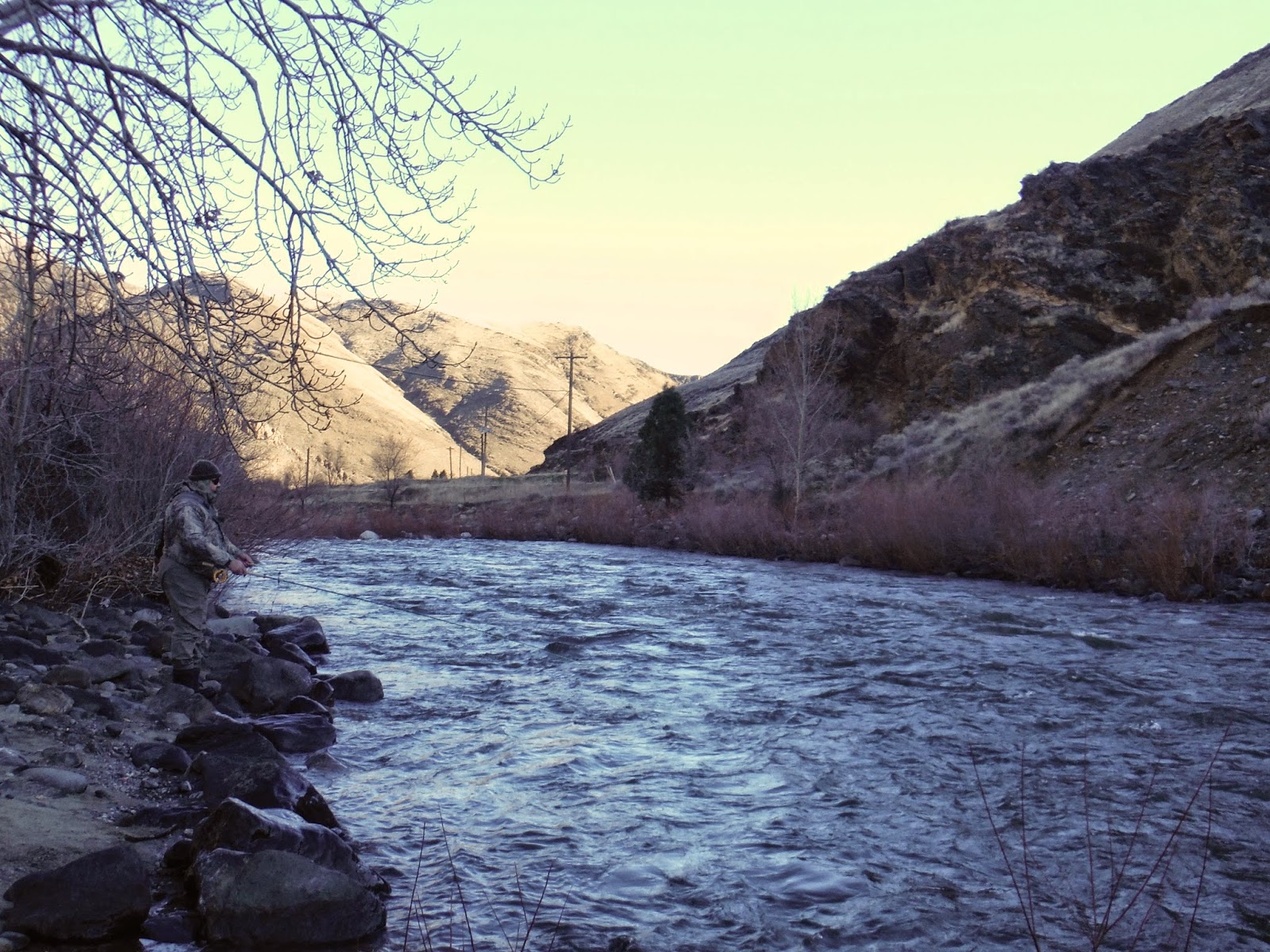 I set up a 7wt. Helios switch rod Ryan Spillers let me borrow with a nymphing outfit, while Stuckey rigged up his 8wt. Helios 2 switch rod for swinging flies. Nymphing is the most effective way to fly fish for steelhead during this time of year, but swinging flies is the more pure way. Because of this I was reluctant to pick a spot to fish when Stuckey offered my choice of water.  It is my belief that anyone who is fishing a more pure way should get first pick as to where they want to fish. Stuckey insisted I pick a spot, and it worked out because I ended up hooking into a rainbow trout! 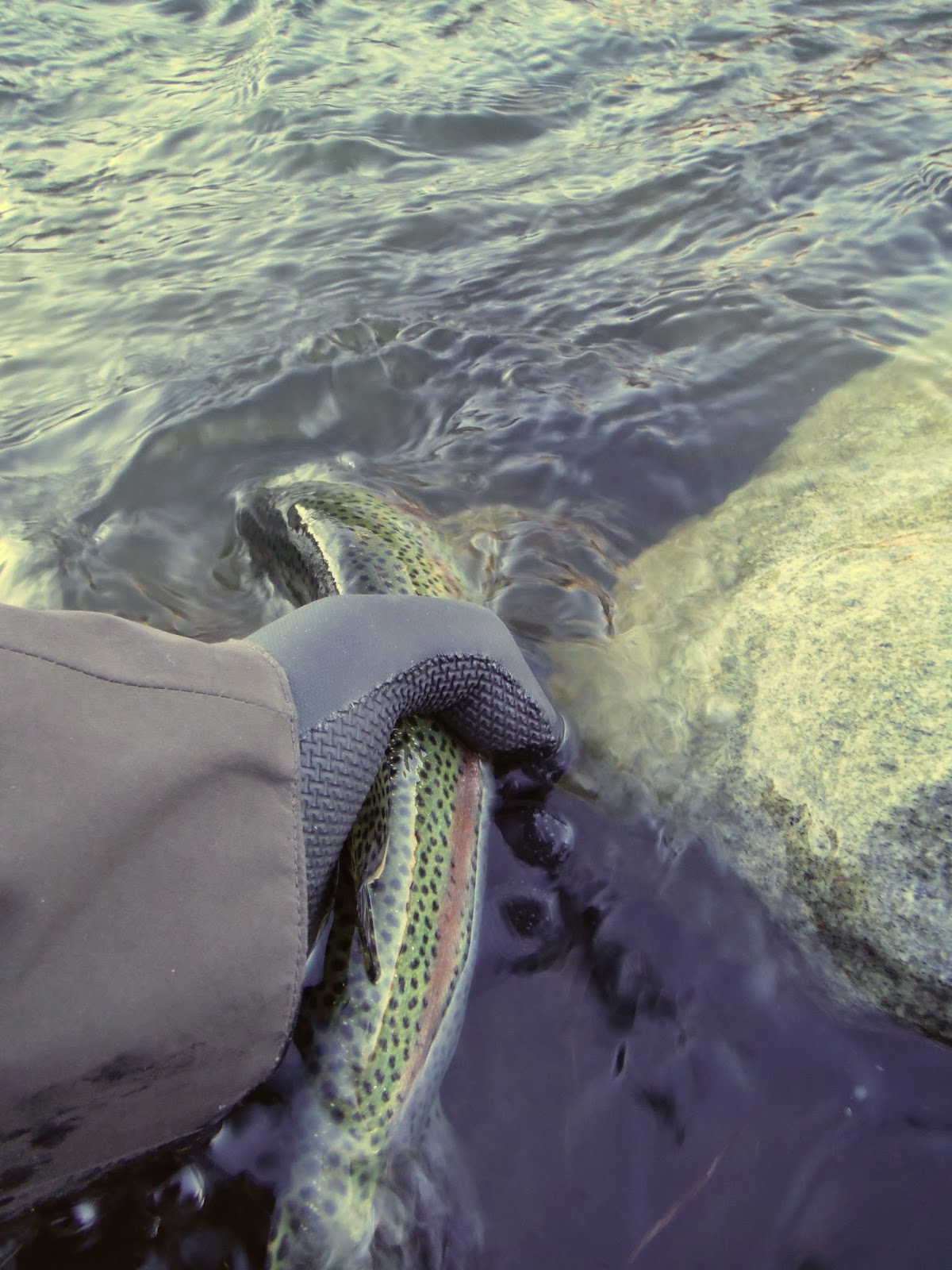 “I thought your rod was going to break bringing in that fish!” Stuckey said with a laugh.
“It took my pico-stonefly nymph.” I said back to him.
“Oh, God!” Stuckey said, “don’t you have any other names to use for your flies?”
“What are you talking about?” I said laughing, before we left to find a different spot on the river. 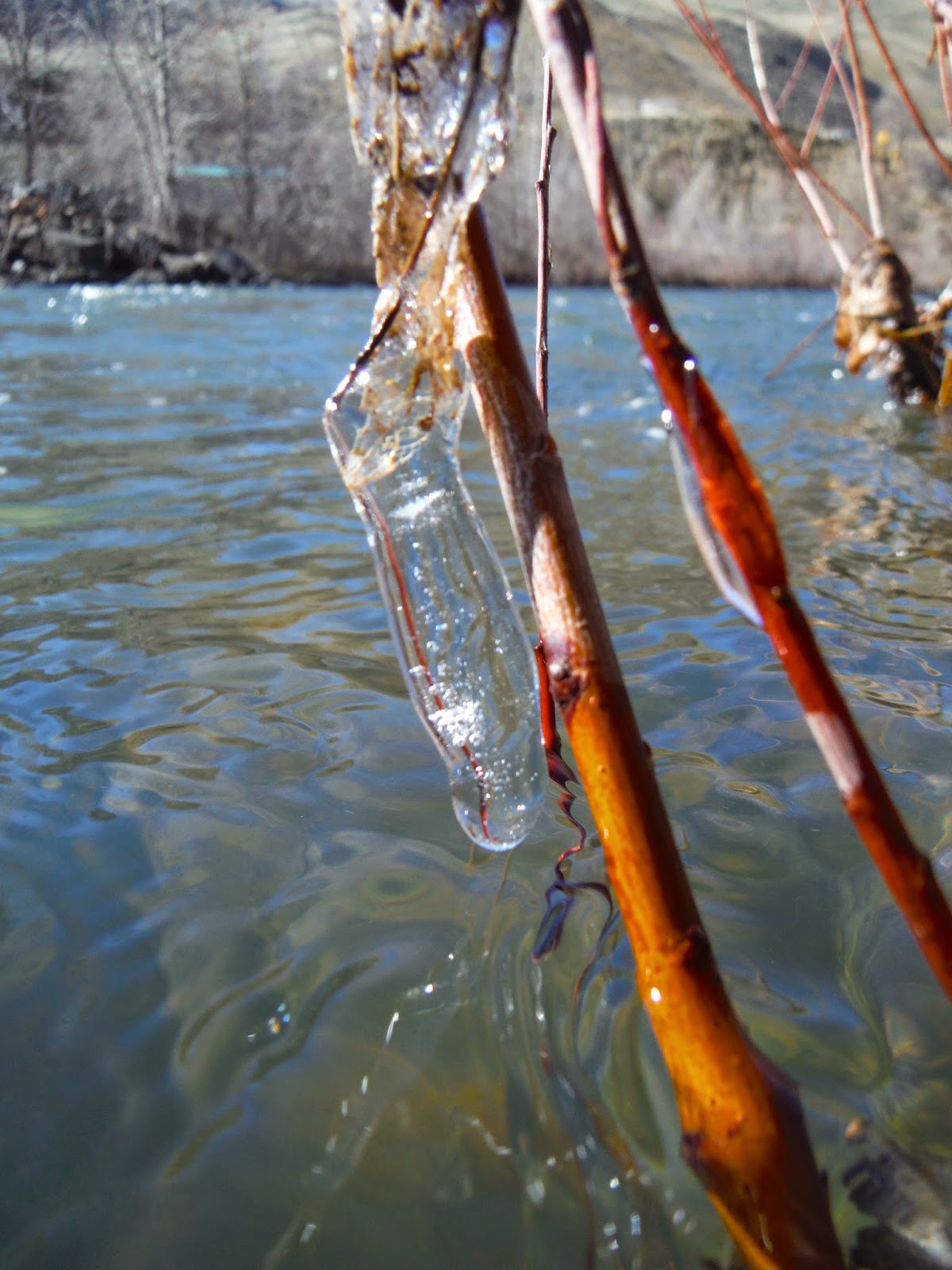 The sun peaking over the ridge helped the temperature rise a degree or two, which warmed us up enough to shed a layer of clothing.
“This is the spot where Ryan brought me last year, and we both hooked into steelhead.” I said, as we approached a turnoff.
“Sounds good to me.” Stuckey said, and pulled over.
Stuckey found a nice spot to swing his flies while I walked further upstream. 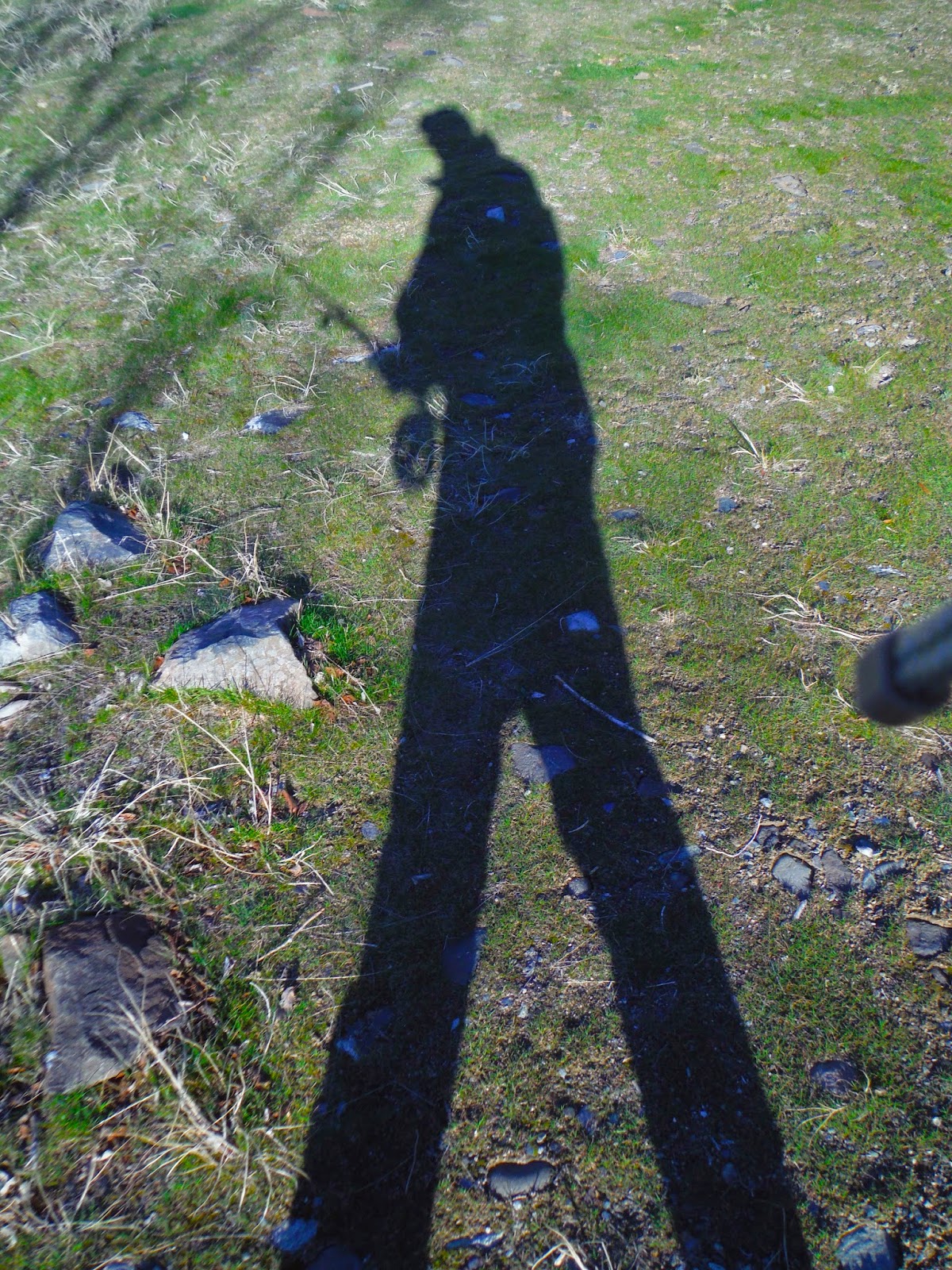 I shimmied my way down the large boulders to the river’s edge, which had enough space for me to stand semi-comfortably.  I worked the edge of a large riffle that looked like good holding water for a steelhead, and when I came up empty I readjusted my indicator to allow my flies to go even deeper.  I flicked my flies out and watched my indicator floating downstream, and then it shot underwater!  I set the hook with all the force that an eleven foot 7wt. Helios switch rod has to offer, and felt the glorious tug of a steelhead!
Normally I’m quiet when bringing in fish, but with all the guys that filed in around me with hardware, I felt the need to put on a show.
“Oh, there it is!” I yelled, getting some attention from my fellow spincasting anglers.
“It’s a steelhead! It’s a fighter!” I yelled out again, as they watched. There was no hiding my happiness as I brought the fish in close enough to land.  I reached back for my net… that wasn’t there!  Great, I thought, after I brought all this attention to myself I now have a greater chance of losing the fish.  I brought the steelhead in close, and grabbed its tail to yank it from the river! LANDED, and there are no sunglasses made today that could dim the shine of my smile, as I looked from side to side at everyone watching. 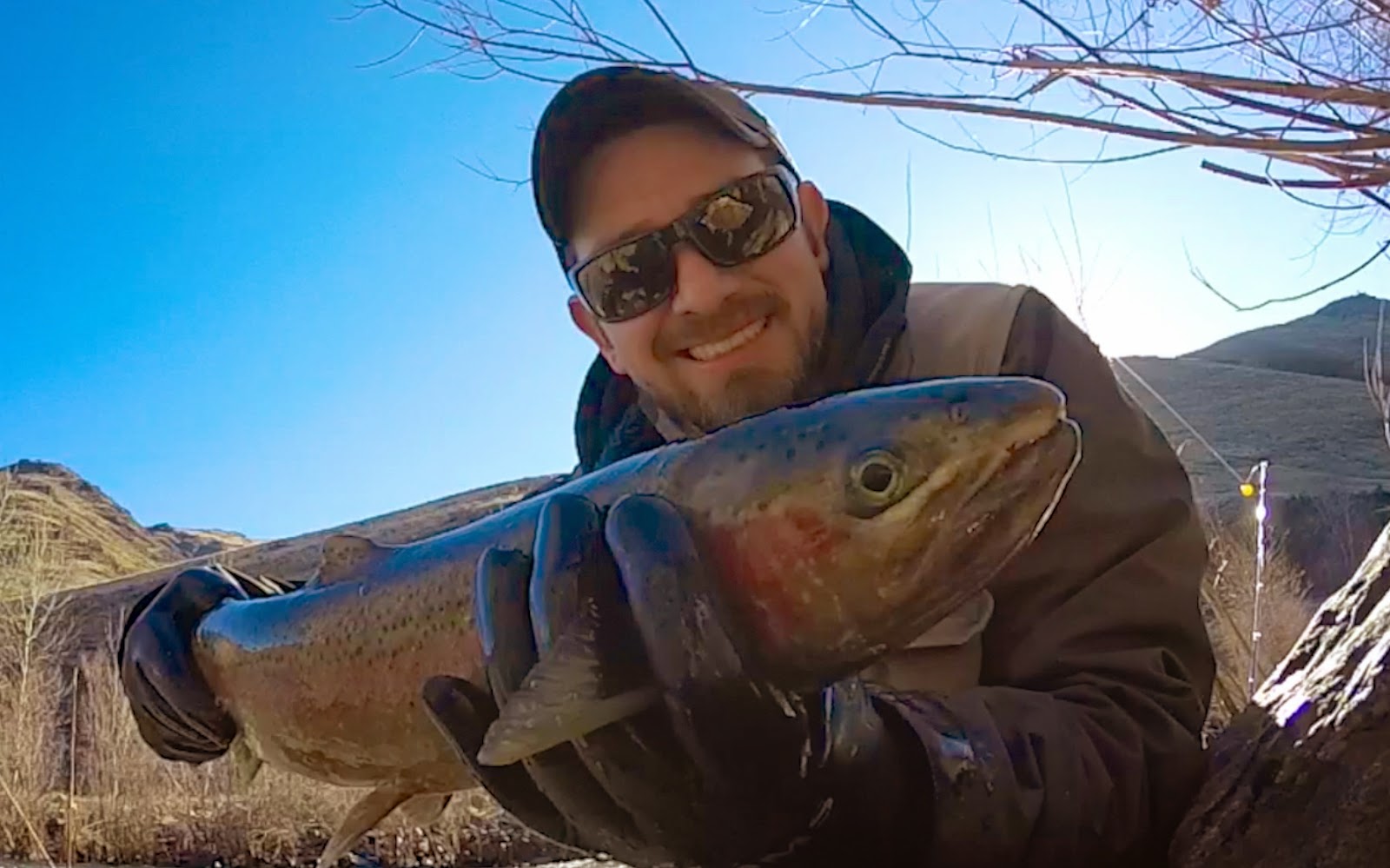 I told the story of catching the steelhead to Stuckey, who got a real kick out of the scenario.  Together we headed to another promising spot on the river to try our luck. 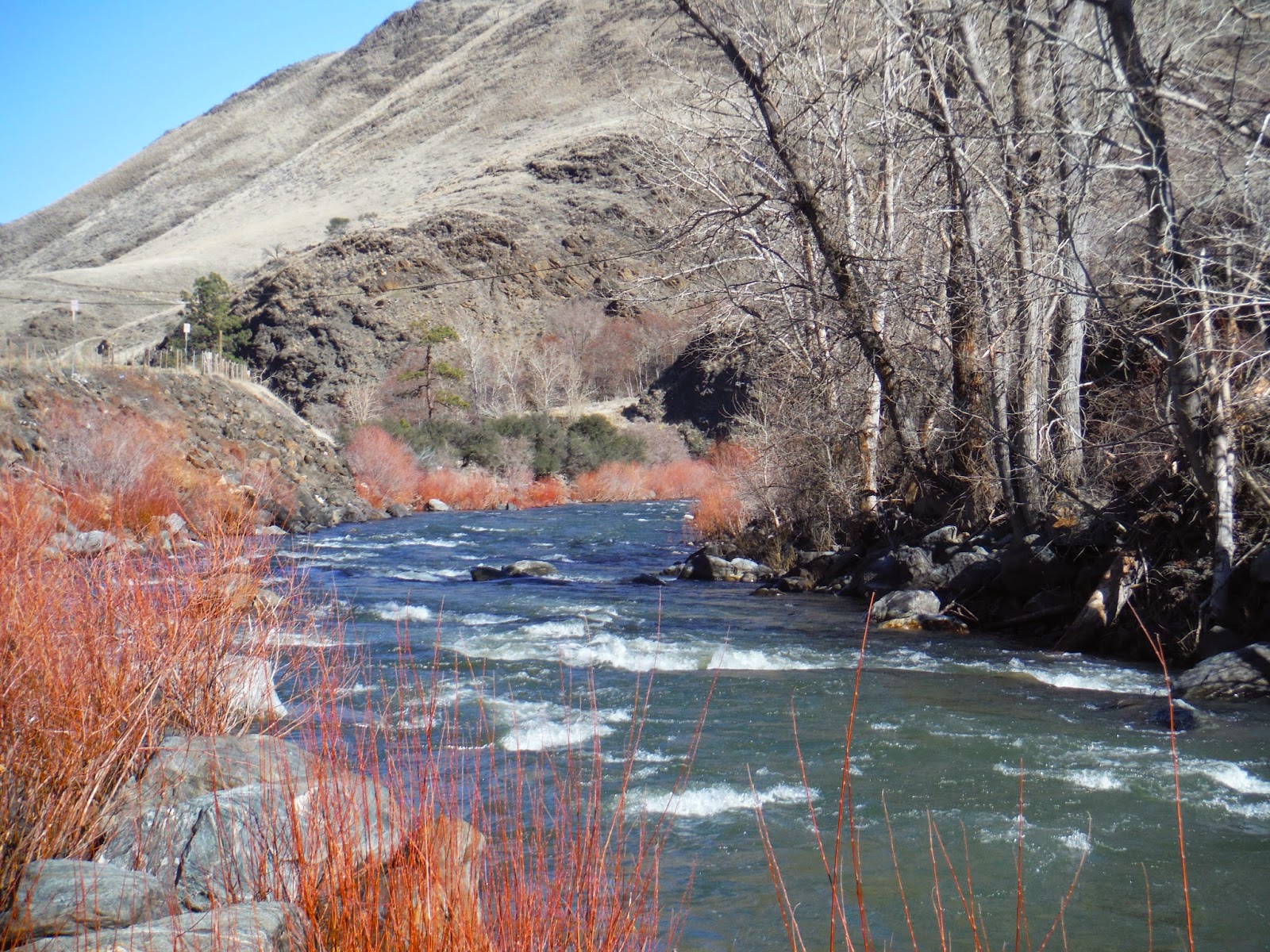 We stopped at a nice spot that had deep holding pools for a resting steelhead. On the banks of the Little Salmon River it was nice to be fishing with a switch-rod.  The amount of torque you can apply on the line allows you to perform casts that require no backcasting, yet the ability to send your flies to the other end of the river with a well timed flick. 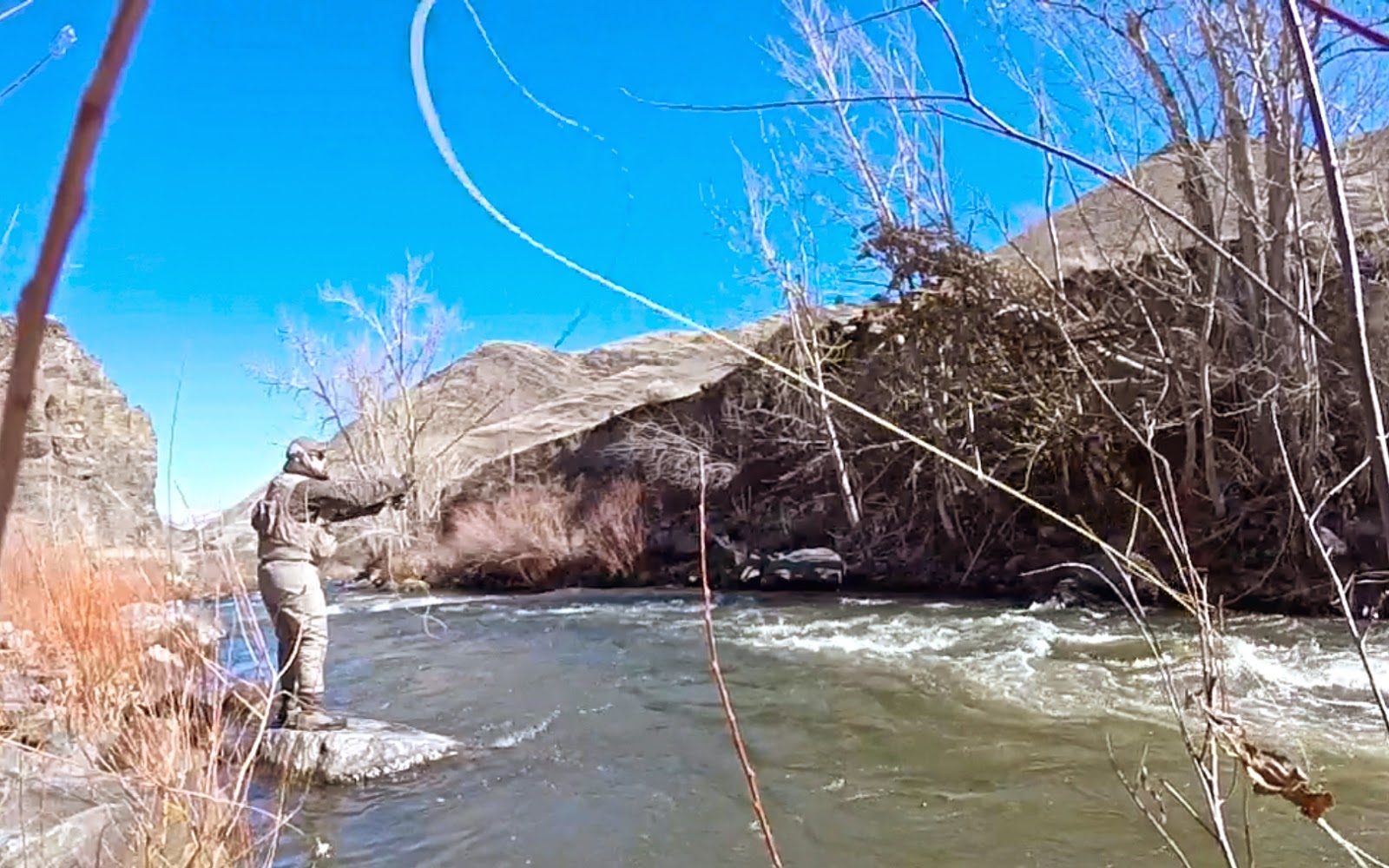 Despite my ability to cover the water, there were no fish willing to take my flies in our new spot. 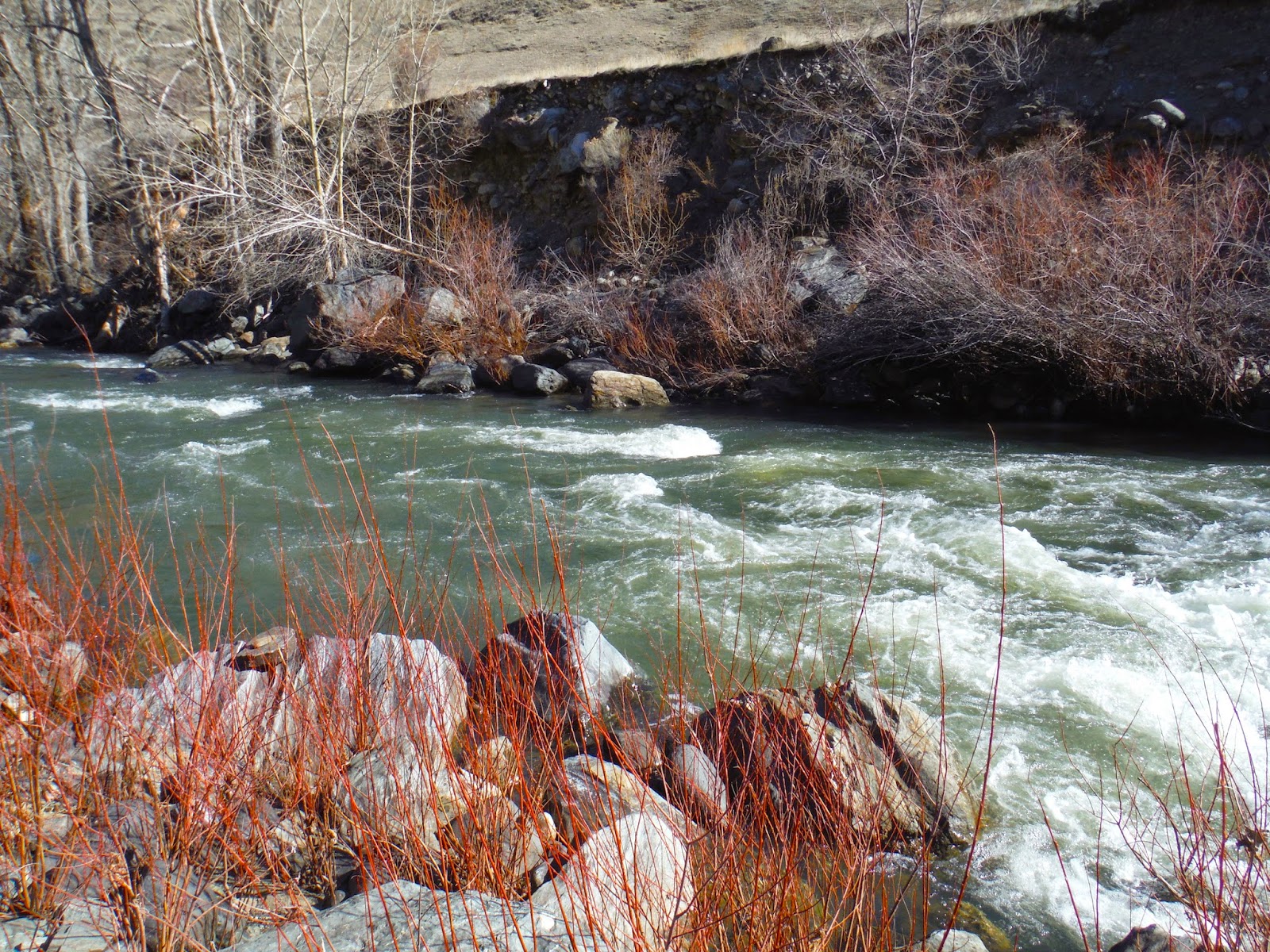 I walked back up to see how Stuckey was doing. From a distance I could tell that Stuckey really knew how to handle a two-handed switch rod.  Perfectly timed casts sent his flies right on target, and made me realize how much more I need to practice my switch and spey casting. 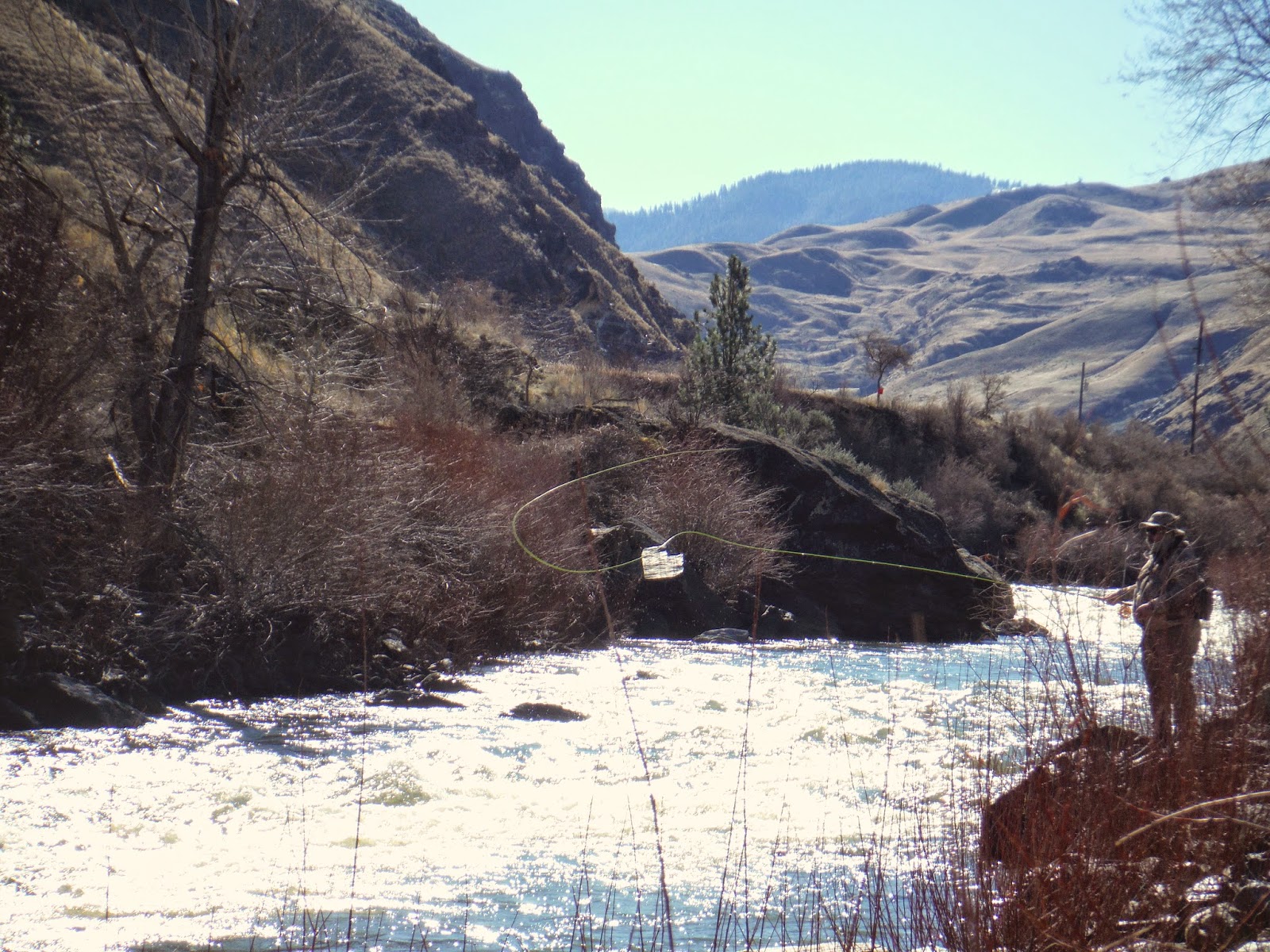 Another quick move took us further upstream to some nice holding water.  At first glance both Stuckey and I smiled; this definitely looked like steelhead holding water!  Stuckey fished the top tail-out while I waded downstream. On a long cast out I watched as my indicator went under and I set the hook hard. My rod doubled over, which got Stuckey’s attention.
“Did you catch Idaho?” Stuckey asked, knowing full well what a snag looked like.
“Sure did, and it’s not coming loose.” I said, and broke off my flies. 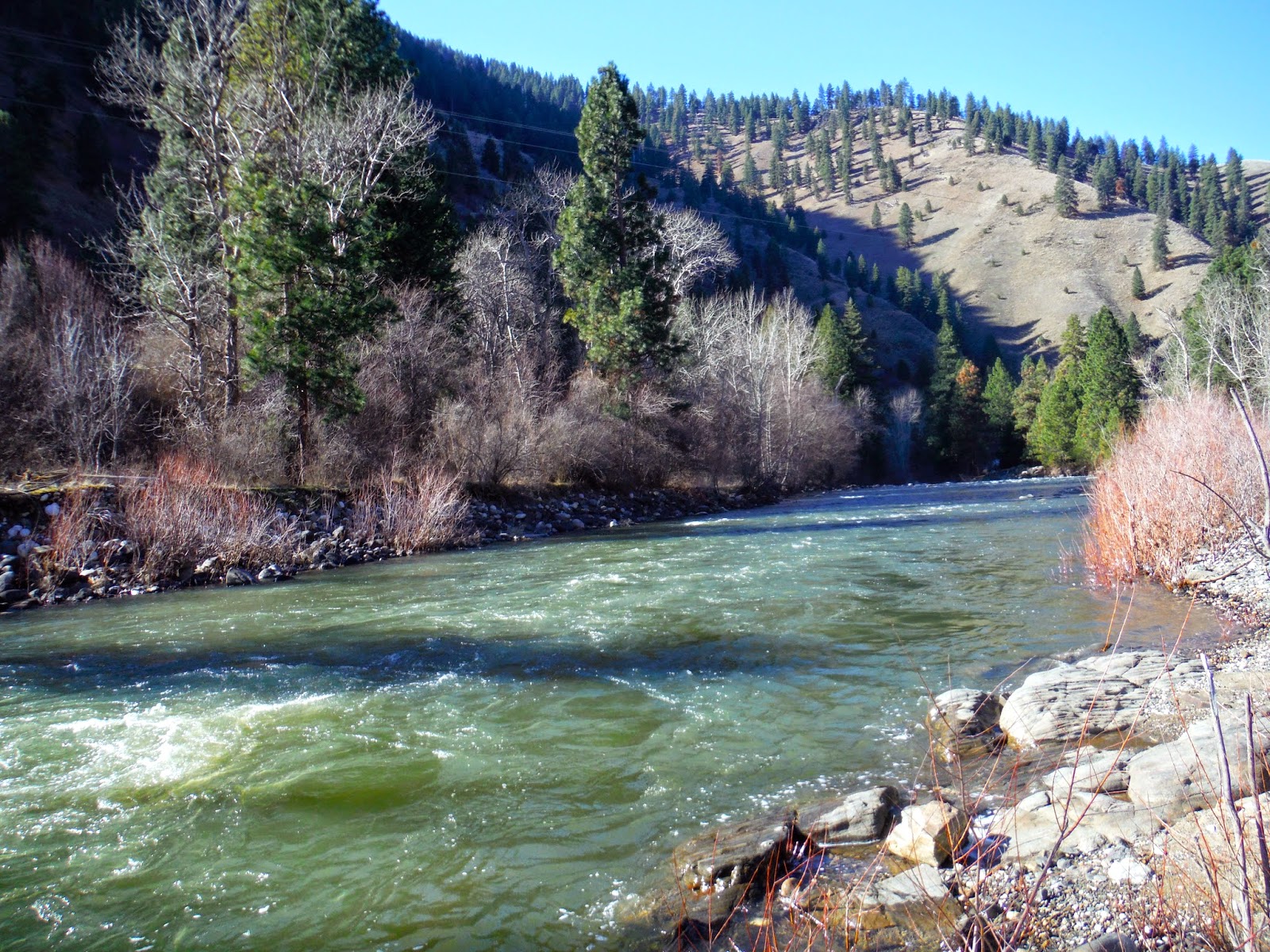 “I would have lost money on that spot.” Stuckey said as we left the nice looking holding water behind.
“I can’t imagine there not being a steelhead there.” I said, puzzled. The day was nearly over, but we were not ready to leave.  We stopped and caught zero fish at one last spot. 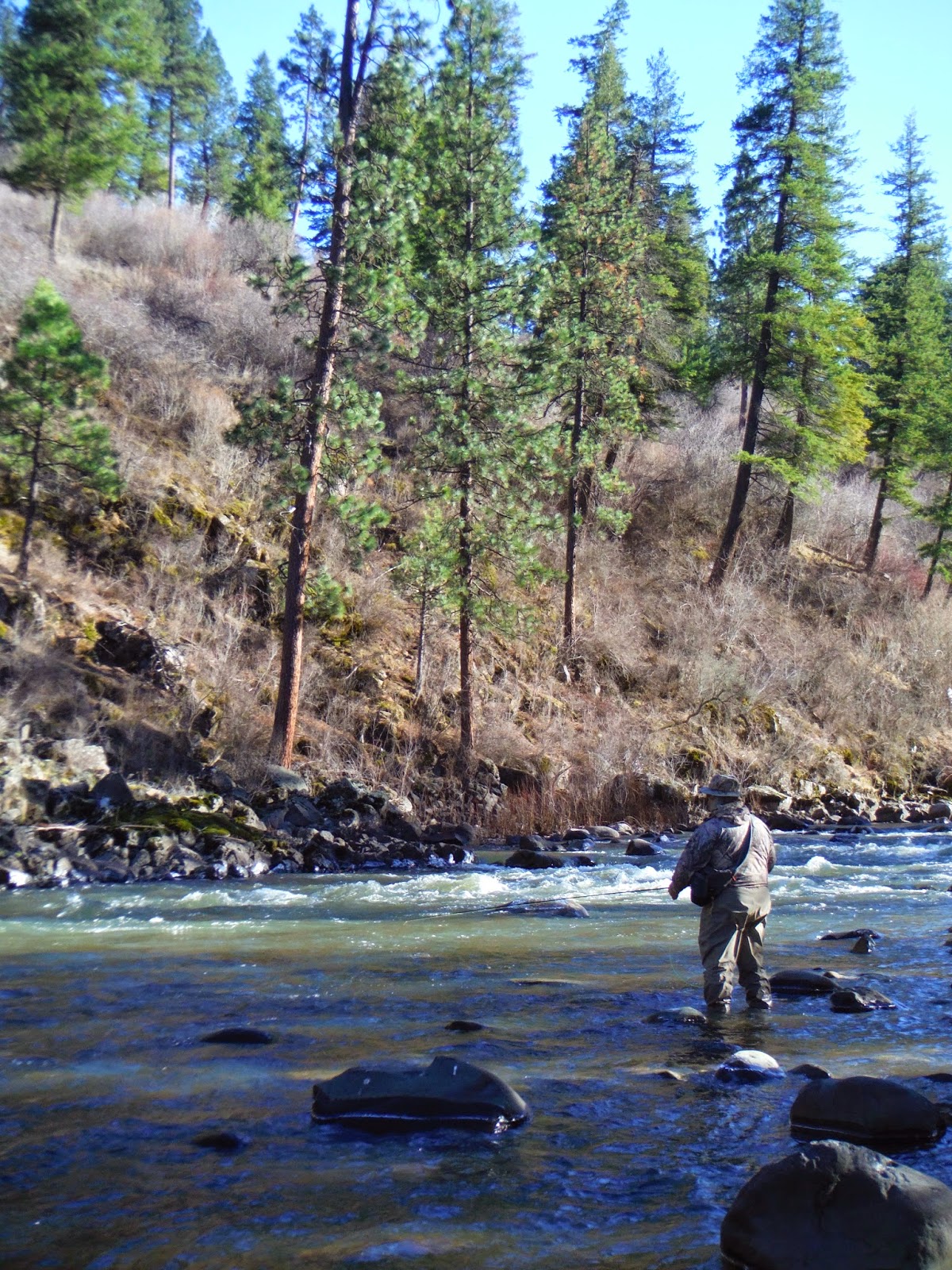 The sun hid behind the big eastern hills that created the canyon we stood in, dropping the temperature back down to a chilling number. The wind started ripping through the riverbanks, which aided our decision to leave the water.
“Hey, Erik, look at this.” Stuckey said, holding up his frozen fly and flicking it a few time to show how solid it was.
“Well, if that isn’t a sign to end the day, I don’t know what is.” I said, as we geared down and headed back toward Boise. We stopped in Cambridge to have dinner at a small Ma-and-Pa restaurant, which had homemade ice cream! In the end, Stuckey ordered the pie for dessert, while I went with two scoops of ice cream to finish off a nice day of steelheading.

4 thoughts on “Chasing the Steel”