Skip to content
I going to be honest, I was dragging myself out of bed this morning to meet up with my buddy, Ryan Spillers, to go steelheading on the Boise River.  My hope was to catch a fish before work, which limited my time to just under an hour and a half. My expectations were low, and so was my enthusiasm. 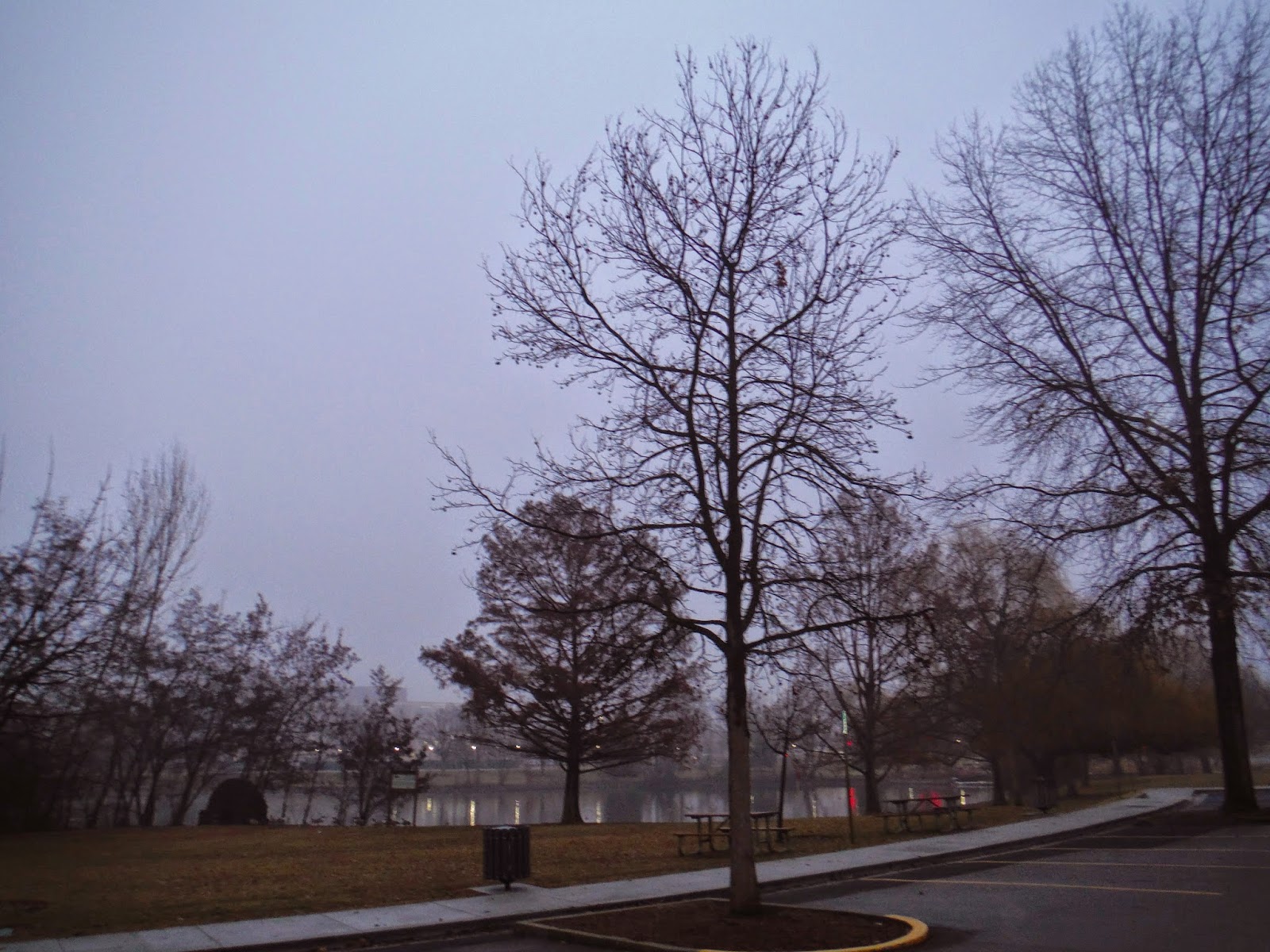 “Erik!” Ryan yelled over to me as he stepped out of his truck.
“Ryan!” I yelled back.
“Ready to catch a steelhead?” He asked, sounding peppy as he gathered his gear. Ryan has been chasing-the-steel in the Boise River a lot this year, and is dialed in to their locations and what the fish may be feeding on.
“Hell yeah!” I said back to him, finding his can-do attitude uplifting.
“Then let’s do it!” He said, and with everything rigged up, we walked to the river.
“Hold on, I want to get a picture of you coming down the embankment.” Ryan said, as he shot down it like a squirrel, then turned with his camera ready.
“Okay, here I come.” I said, as I started to make my way down as naturally as possible. 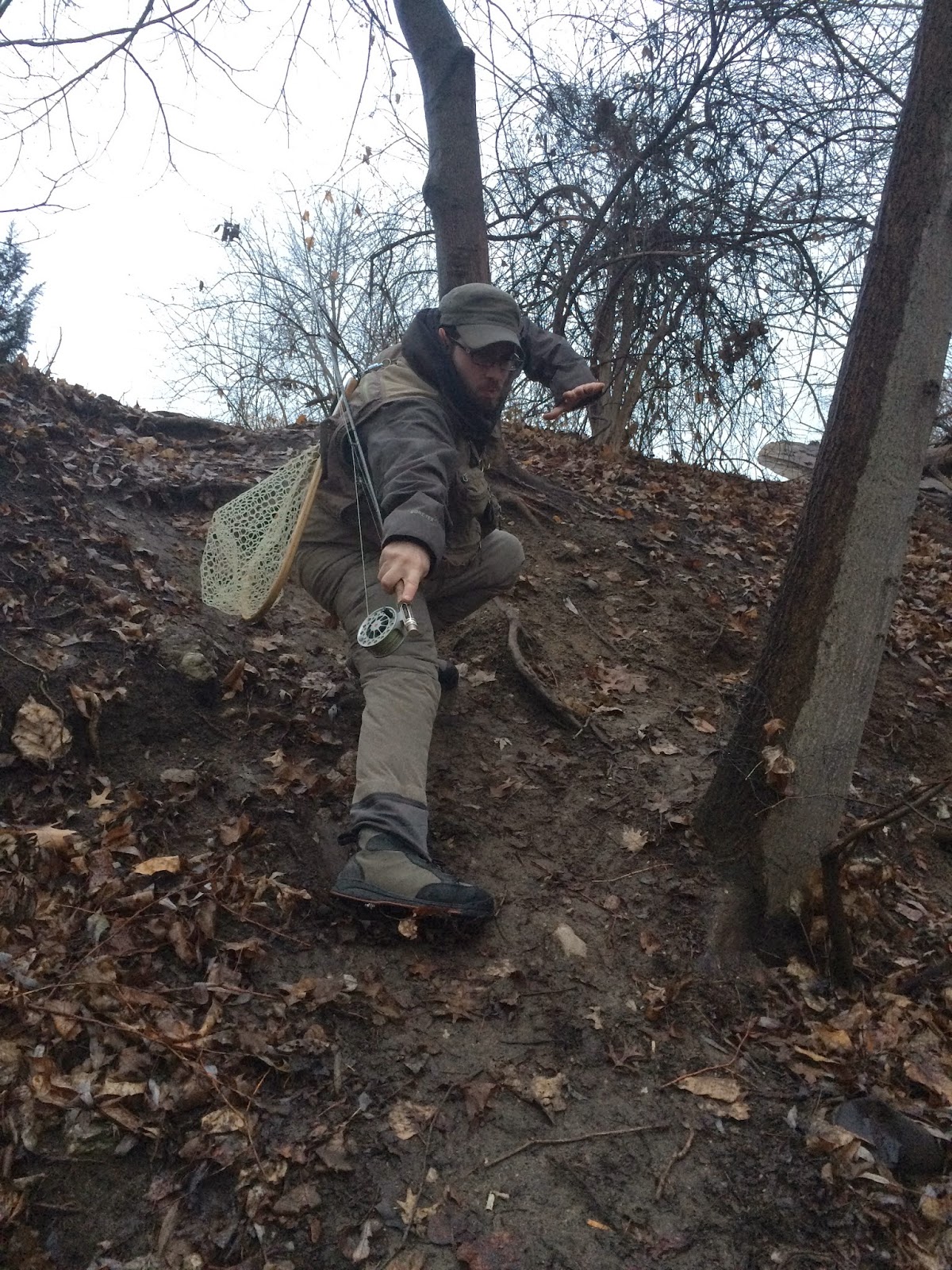 We got to the river, and Ryan was quick to point out a promising spot. 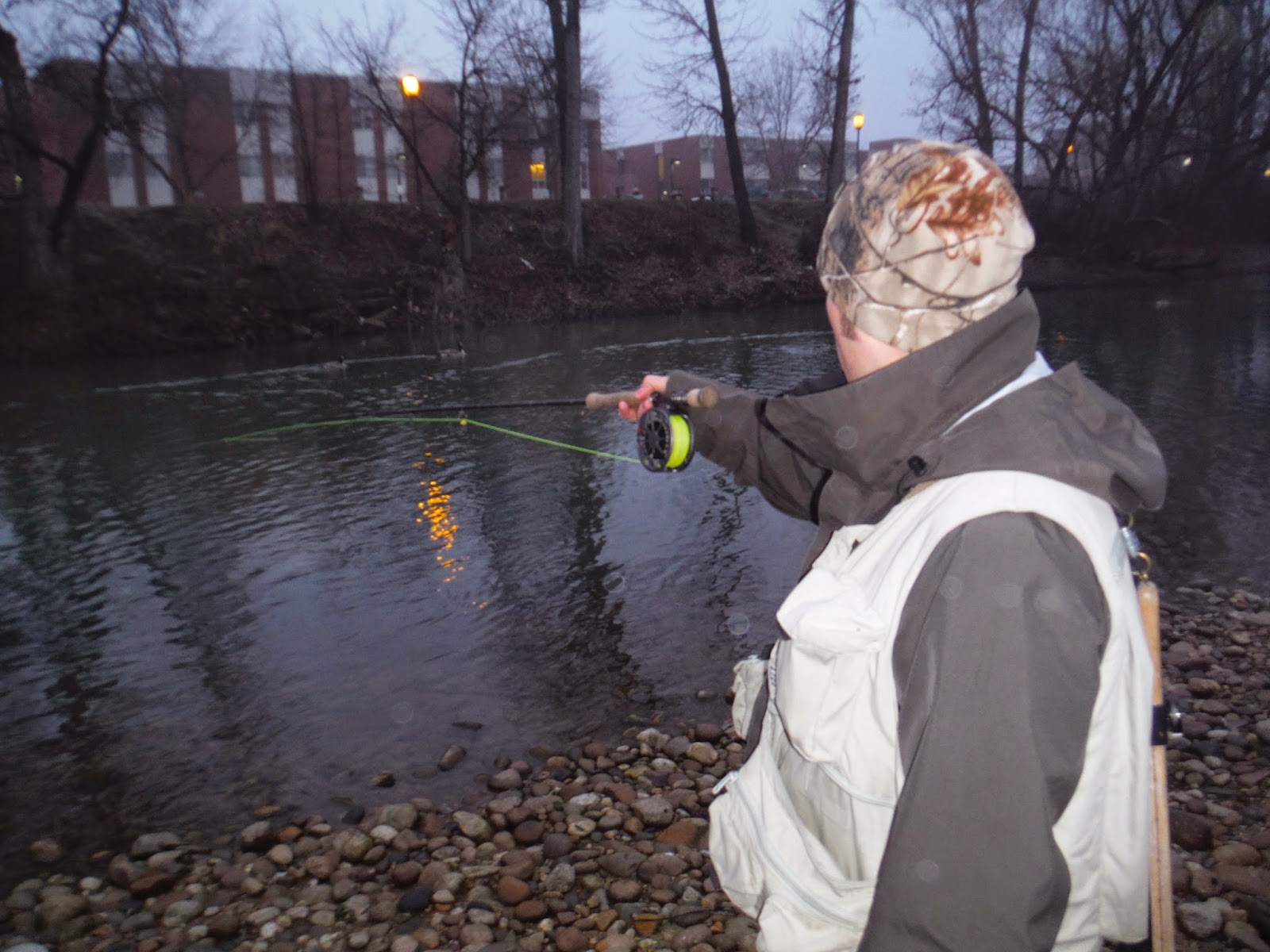 We split up and started fishing. For me, waiting for an indicator to go under is boring, and is probably the reason I was dragging my feet to get up this morning. I watched as my indicator floated by again and again while talking to it, and to myself… “Okay, now!” I said, willing my indicator to shoot under to indicate a fish had eaten my fly… but nothing.
“Now!” I said again after another cast, but the yellow ball of an indicator stared right back at me, lifeless.  This went on for a good hour, and I was losing patience. Which is funny, because I got into fly fishing for my lack of patience. 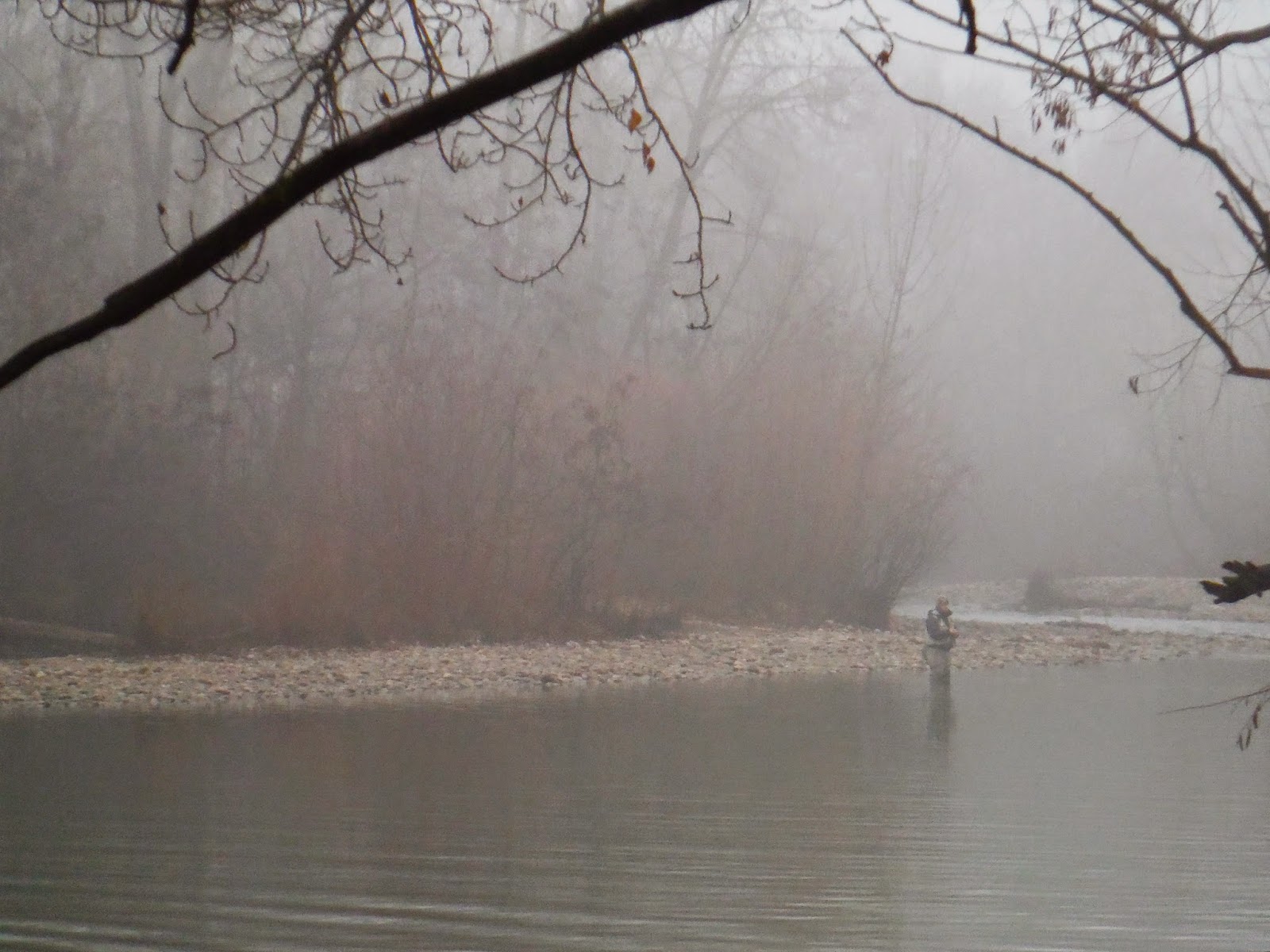 The day was starting to clear up, which meant time was running out. I shot my line out again and watched my indicator floating downstream, then it jolted under! No matter how long I have been waiting, I am always ready to set the hook, which I did! Boom! Boom! Boom! The tip of my fly rod jolted hard, and my raincloud-mood lifted to a bright sunny day!
“Ryan!” I yelled, as I started walking towards him.
“You got one!” He said happily, before taking out his camera to snap a picture of the fight. 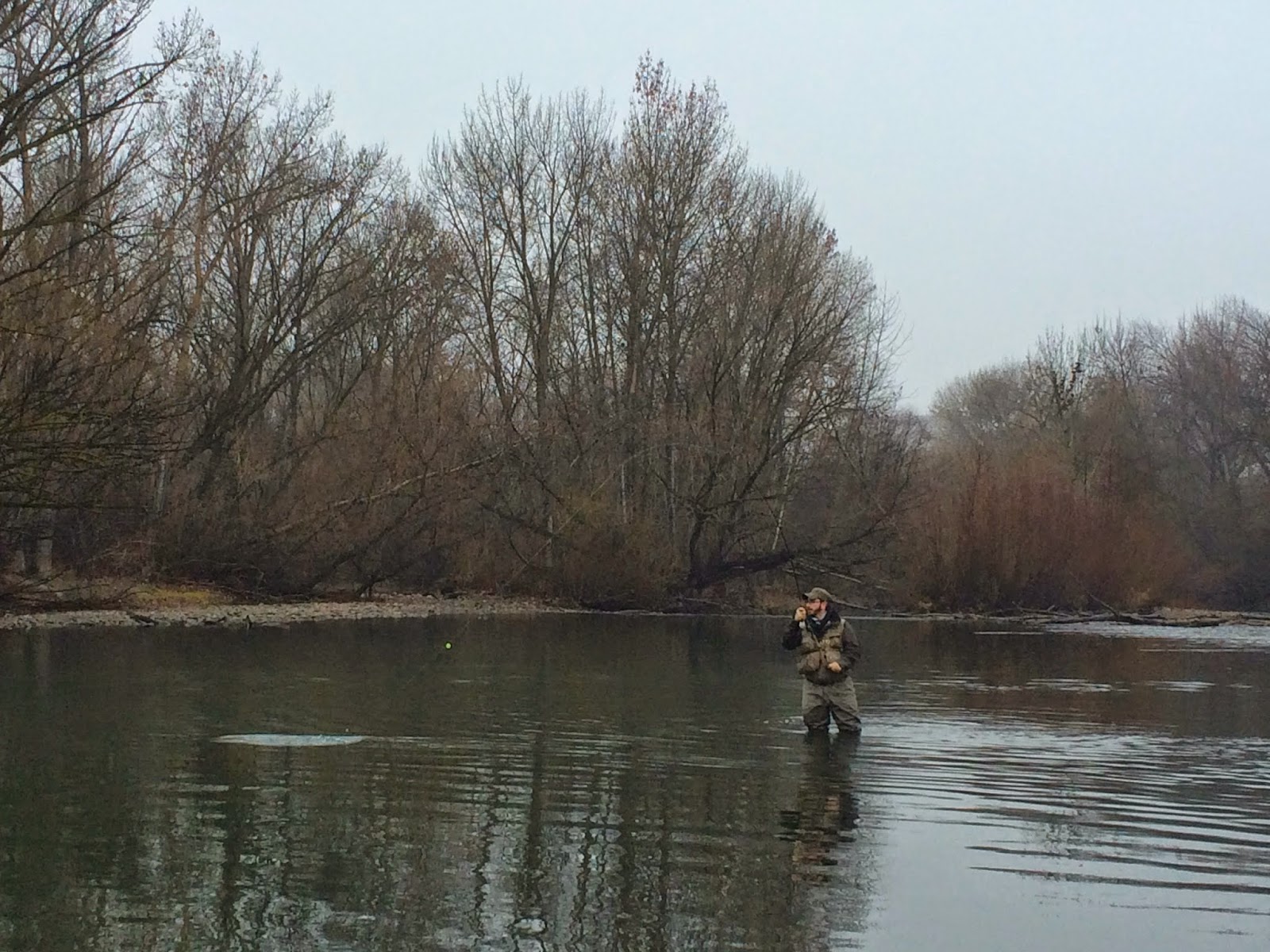 “Ryan, this just made my day!” I said, as the ten foot five weight fly rod was doubled over with the weight of a steelhead.
“I’m glad you got one.” Ryan said back, as I wrenched back on the rod to bring up the head of my fish, and slipped it into my net.
“There we go!” I said, after the steelhead was securely landed.
“Yeah! That’s a nice steely.” Ryan added, as I picked up the fish for a picture. 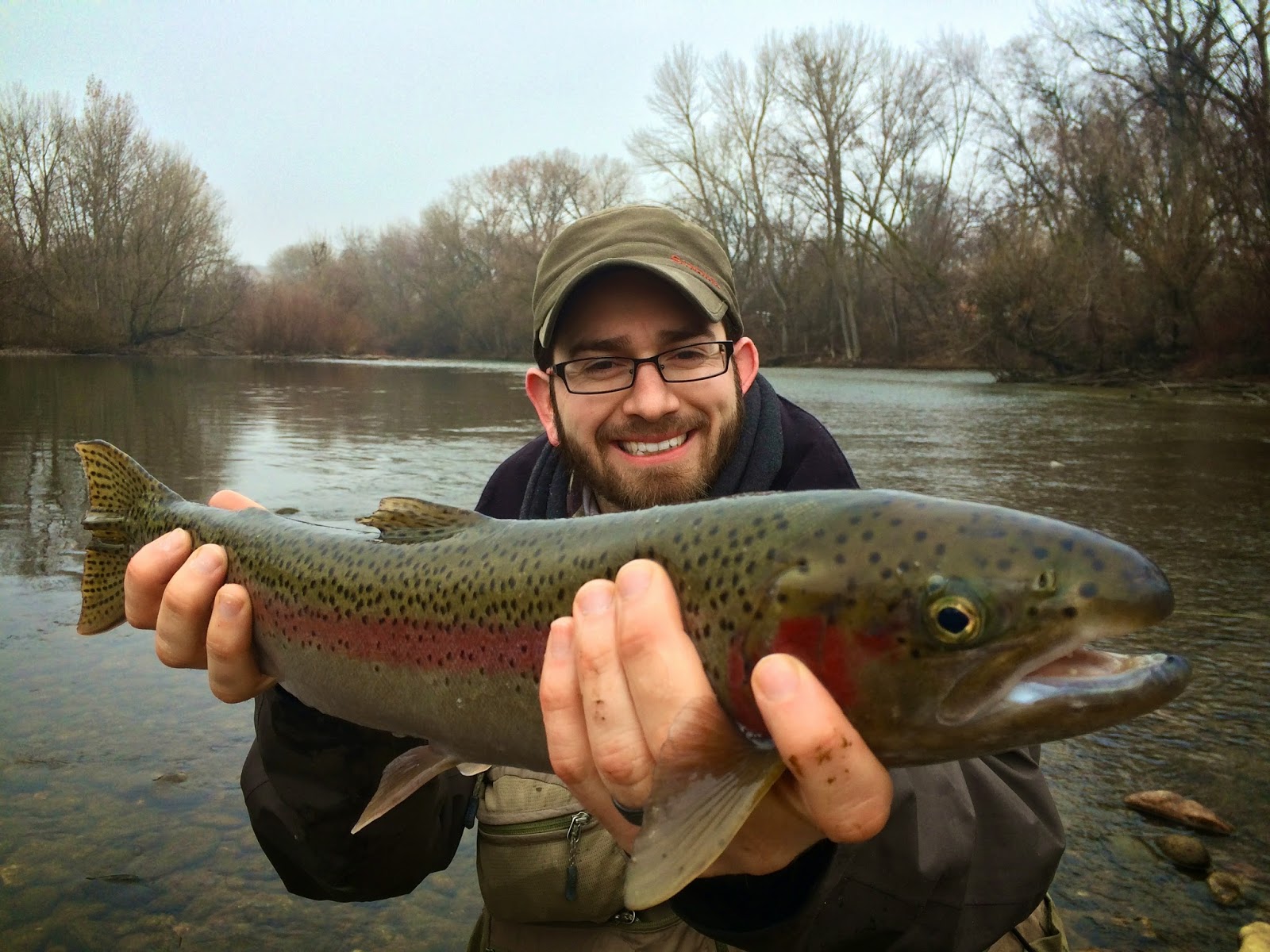 “What did it take?” Ryan asked.
“You’re not going to believe it.” I said, as I held up the fly.
“Ohhhh!!!” Ryan yelled, “it took the Pico Stone!”
“Yes it did!” I said, laughing.
The funny thing about the Pico Stone, is that I never liked it well enough make it public. It was an ugly fly that I kept in my fly box for a while, because I felt it needed more work. Whatever reason I decided to use a fly I disliked was similar to the feeling I got that made me not want to go fly fishing this morning.  And in the end, I was glad I did both… It’s going to be a good day today!

3 thoughts on “Just This Morning”