Skip to content
“You are not bringing your damn fly fishing stuff!” My friend, Stephanie, AKA Lame-Spice, said to me the day before we went on the hike.
“Why not?” I asked.
“That wasn’t meant to be a question, you’re just not!” Lame-Spice snapped.
“Do you always have to bring your fly fishing stuff everywhere you go?” My buddy Nick, AKA Nagger, chimed in.  Both Nagger and Jason were visiting from Salt Lake City, and like new hikes to venture out on.
“I don’t care if he brings his fly rod.” Jason said.
“Thanks, Jason.” I said, but was quickly cut off.
“No fishing stuff!” Lame-Spice yelled.
“Okay.” I said, sounding defeated and thereby ending the conversation.
The next morning when we threw our packs in the trunk of the car, you better believe I had all my fly gear packed along for the ride! 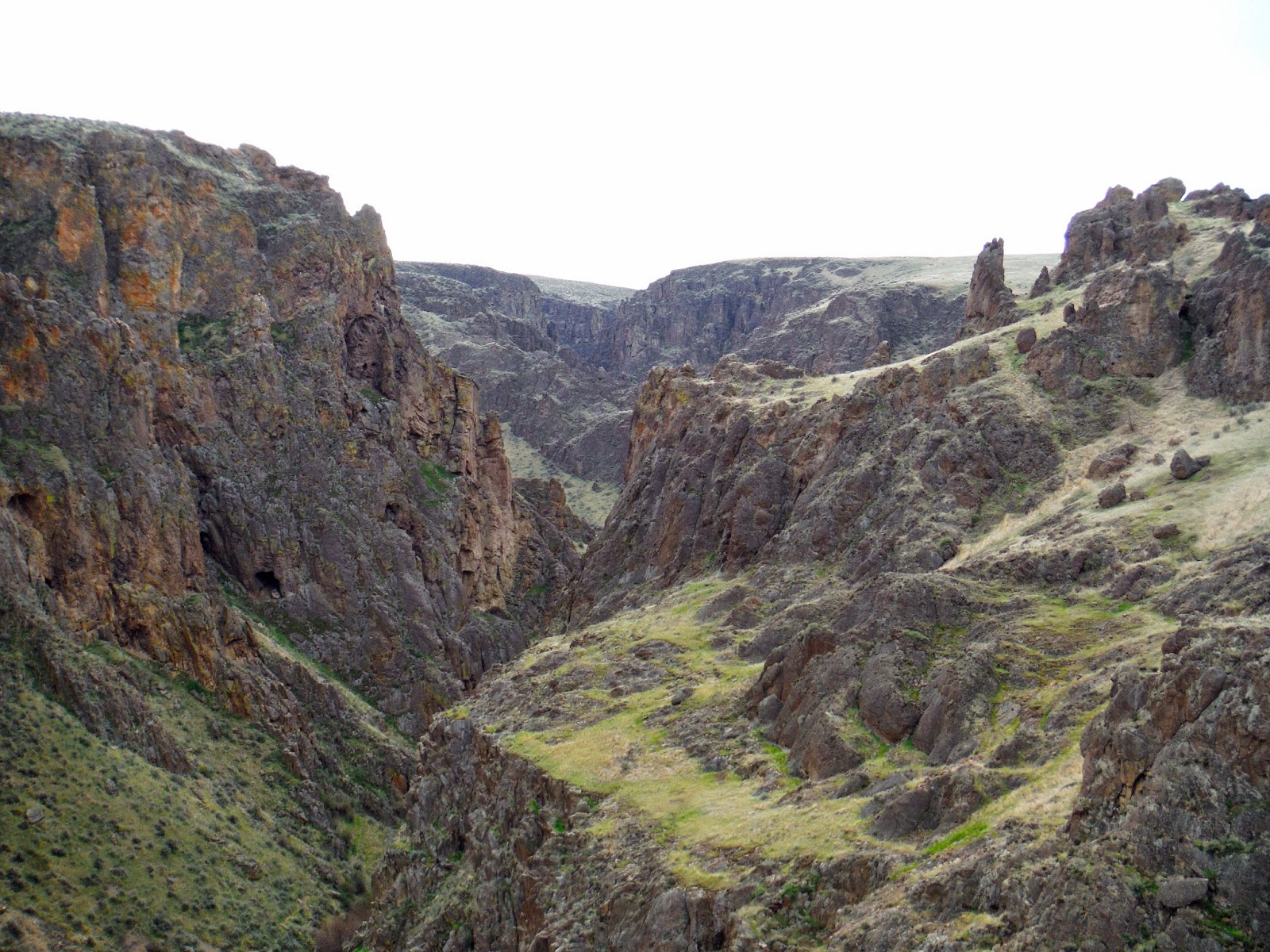 We pulled into the parking lot of the Jump Creek Canyon trailhead, and I pulled out my pack.
“What is that?” Lame-Spice asked.
“It’s his stupid fly fishing stuff.” Nagger said, before I could answer the question. The two fly rods were in their cases and held on either side of my pack.
“That’s not as bad as I thought it was going to be.” Stephanie said, before we started our hike. 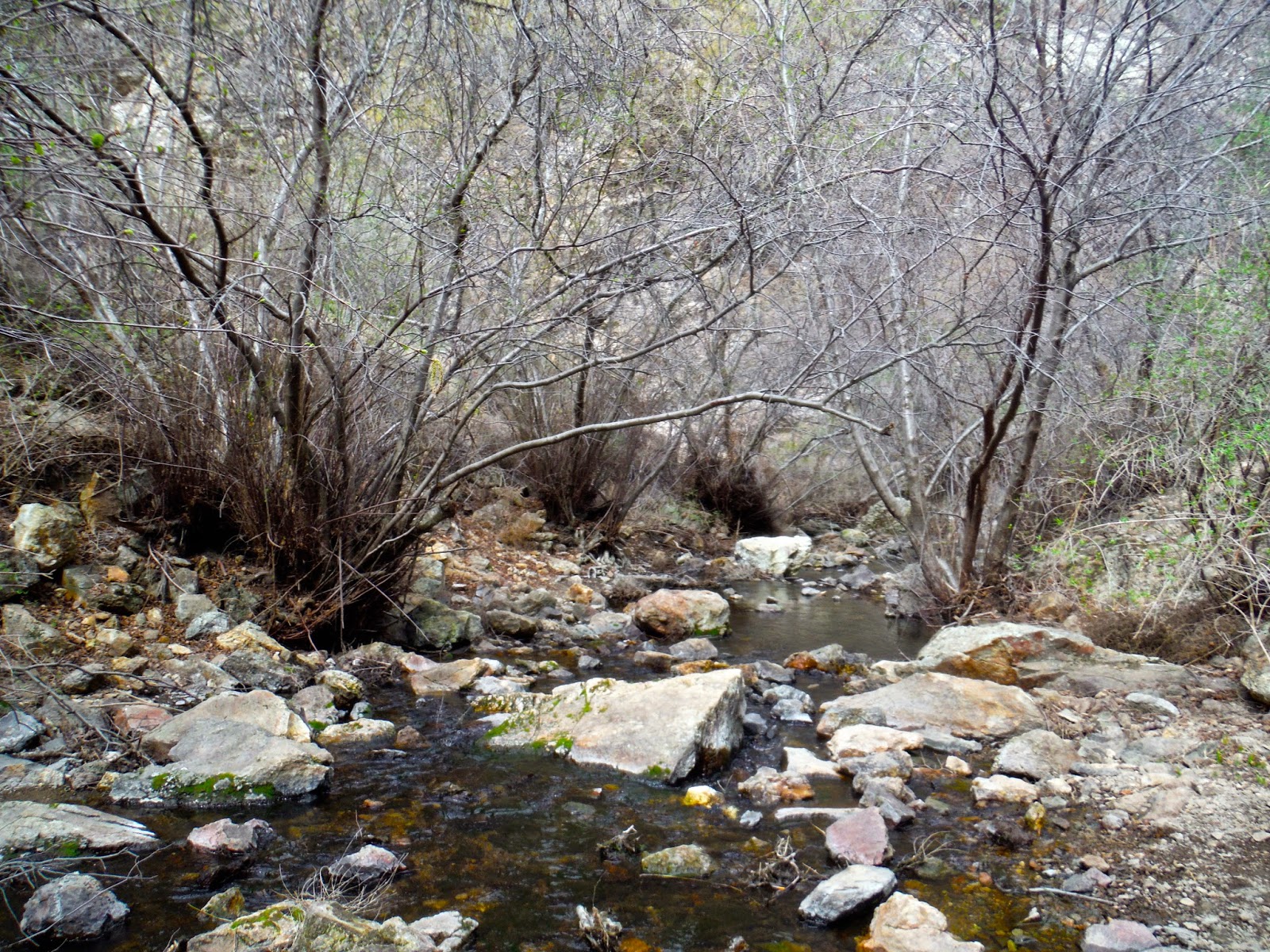 Jump Creek lined the path, and I kept my eye out for pockets of water that could hold fish.  In no time at all, we had arrived at the waterfall where I took a picture of Stephanie and Nagger. 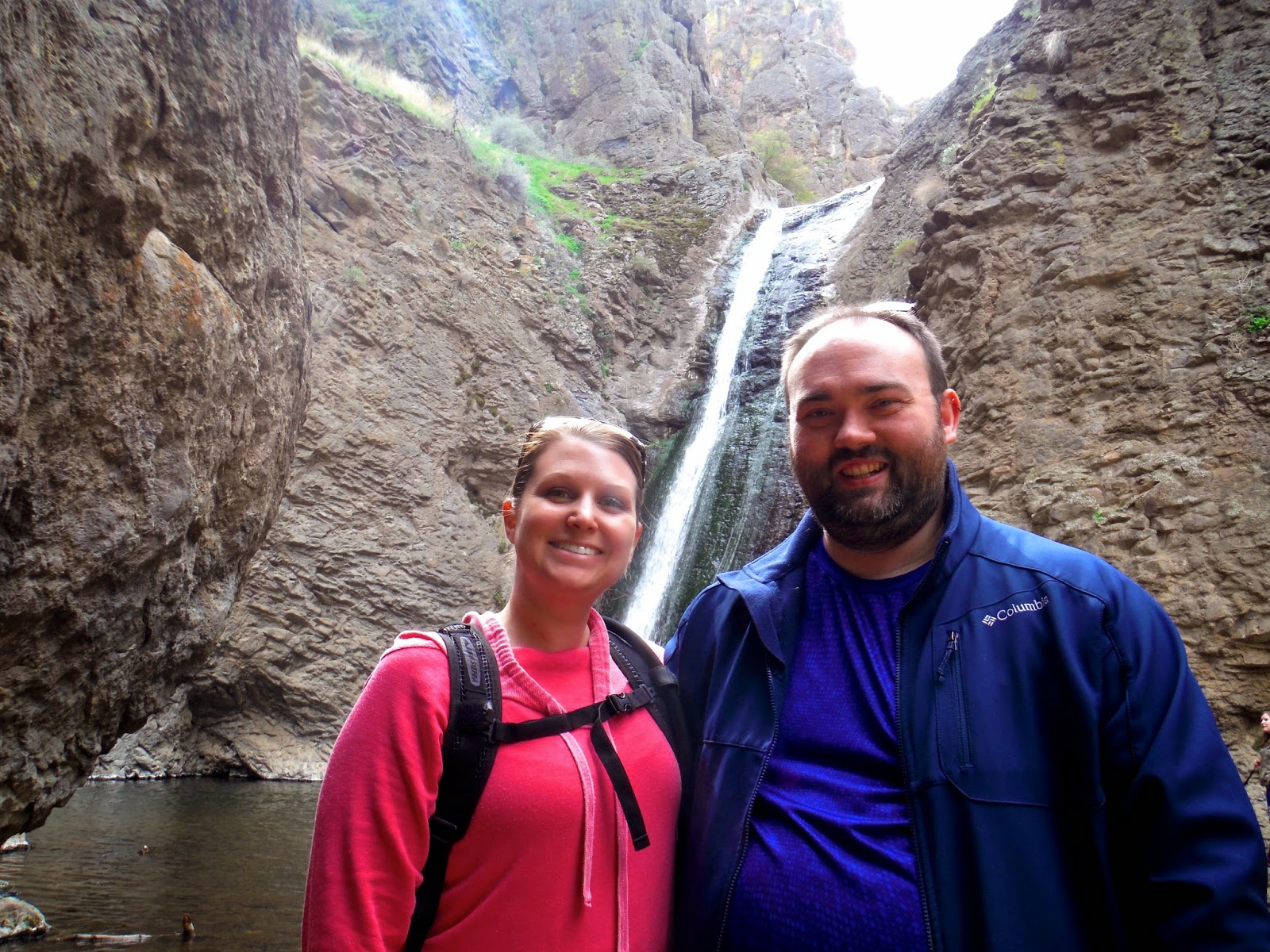 I quickly made my way to the far end of the pool below the falls, rigged up a fly rod, and made a cast.
“We’re going to be here forever.” Stephanie said, but just as she finished, I had a fish on!
“There’s my fish!” I said, bringing in the little shaker fast.
“You’re kidding me?” Stephanie said, and got closer to look at the fish and snap a picture. 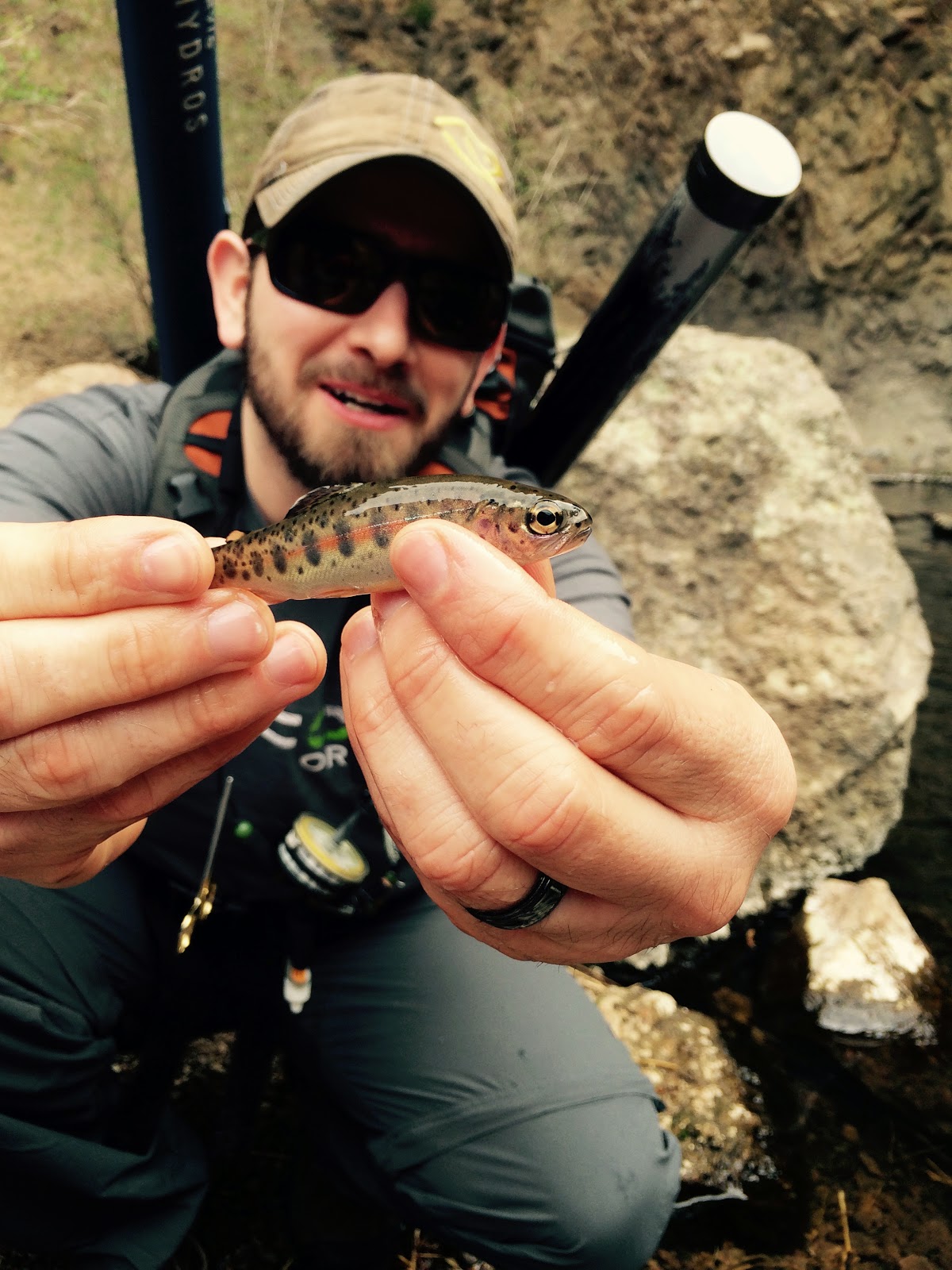 Another cast brought in another fish.
“What kind of fish are these?” Nagger asked.
“They are redband rainbow trout, and are native to Idaho.” I said. “The only place you can find them are in these small creeks.” 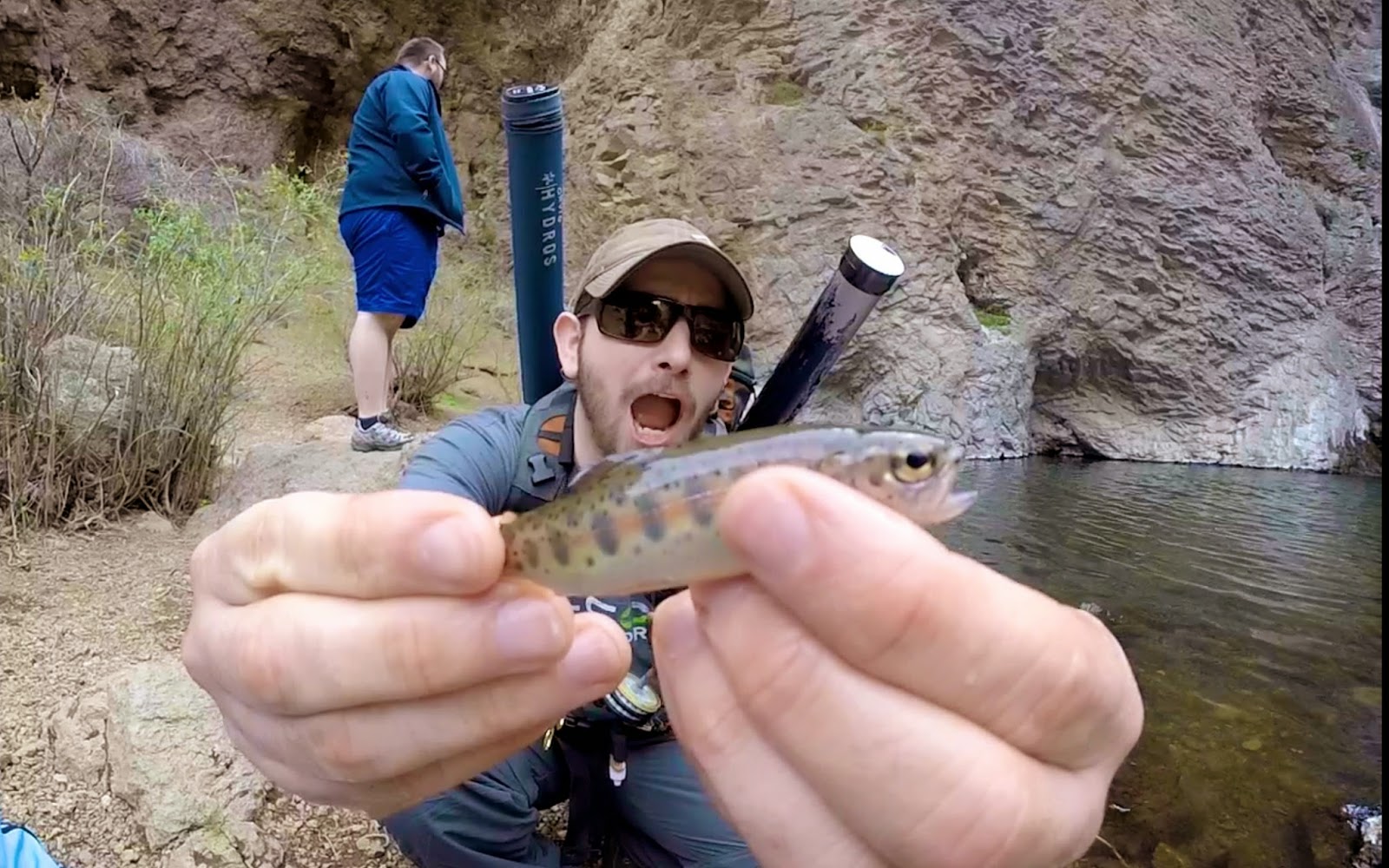 “Do they get any bigger?” Jason asked.
“They can get much bigger than these ones,” I said, “but in this creek, a ten-inch fish would be king!”
Just as I said that, I hooked into another fish.
“This is a big one!” I said, which brought Nagger, Jason, and Stephanie closer to take a look.  Of course a big one means it’s over four inches long, but what this little redband lacked in size it made up for in heart. The little fish shook with all its might, but came in easy for a picture. 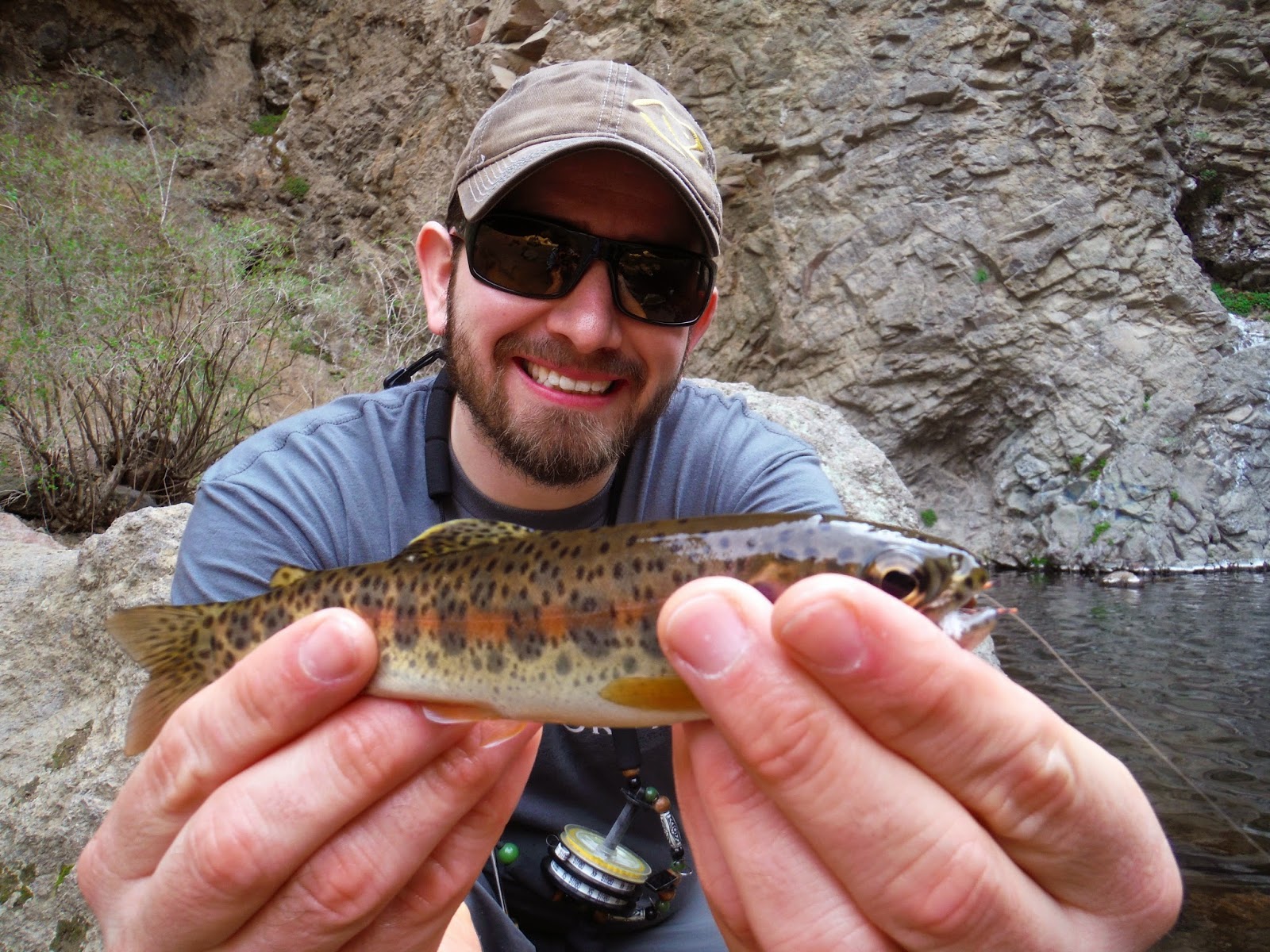 My friends and other hikers around were excited to see the next fish caught.  Everyone walking by was just as excited as me to discover there were fish in this river, and they all wanted to see a fish up close.  A few kids in particular hung out for a little while in hopes of seeing a fish, and I didn’t disappoint. 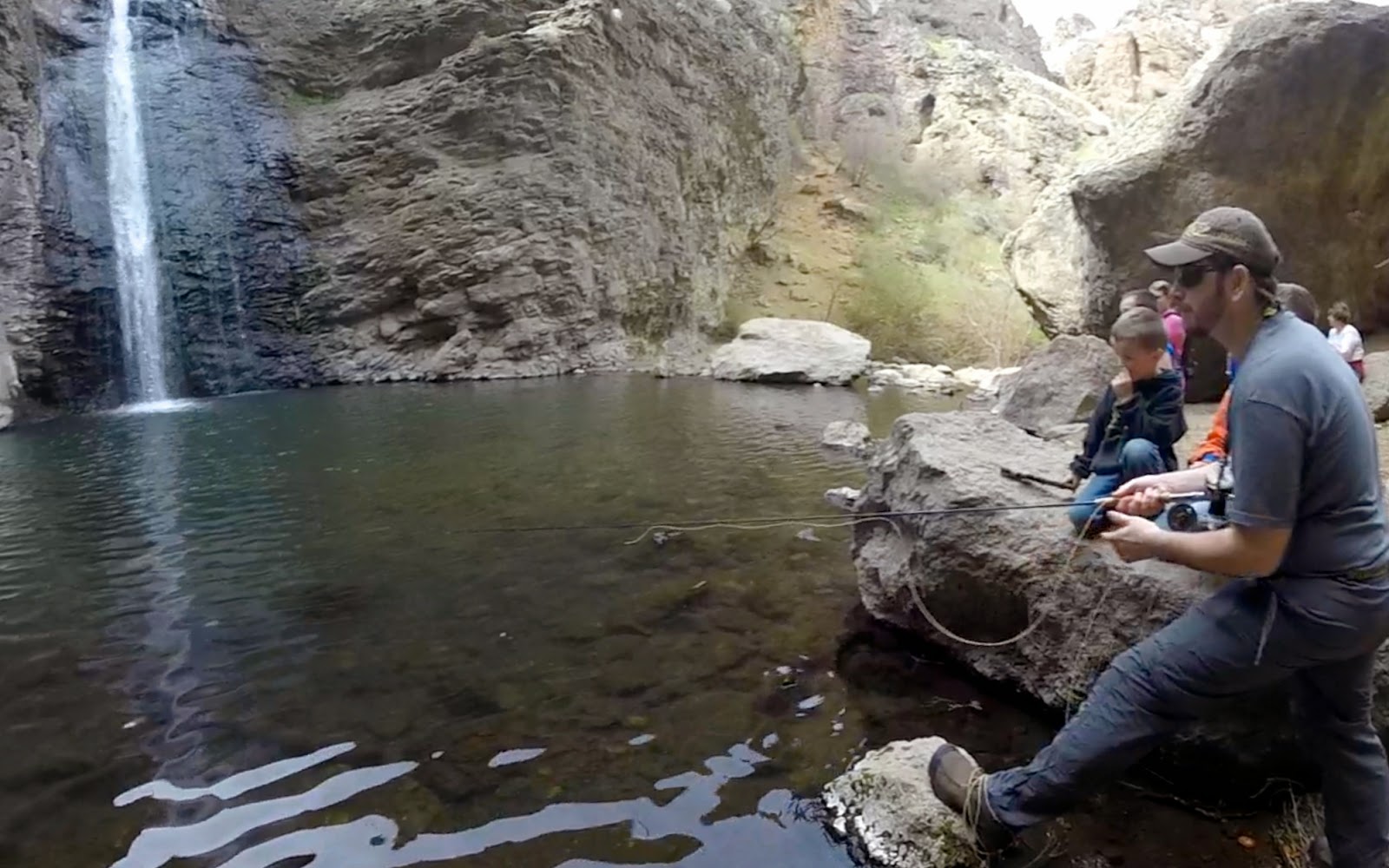 A small fish was caught in no time, and I pointed out all the features of a redband rainbow trout.
“The eyes are the coolest…” I said, “the parr marks go up along the body past the eyes”.  I stopped and pointed at the side of the fish up to its eyes. “See the pupil?” I asked.  “Now look at the dots on either side of the pupil…” I pointed them out, “Cool, huh?”  The boys nodded, and their mom came to have a closer look before I placed the fish back in the water. 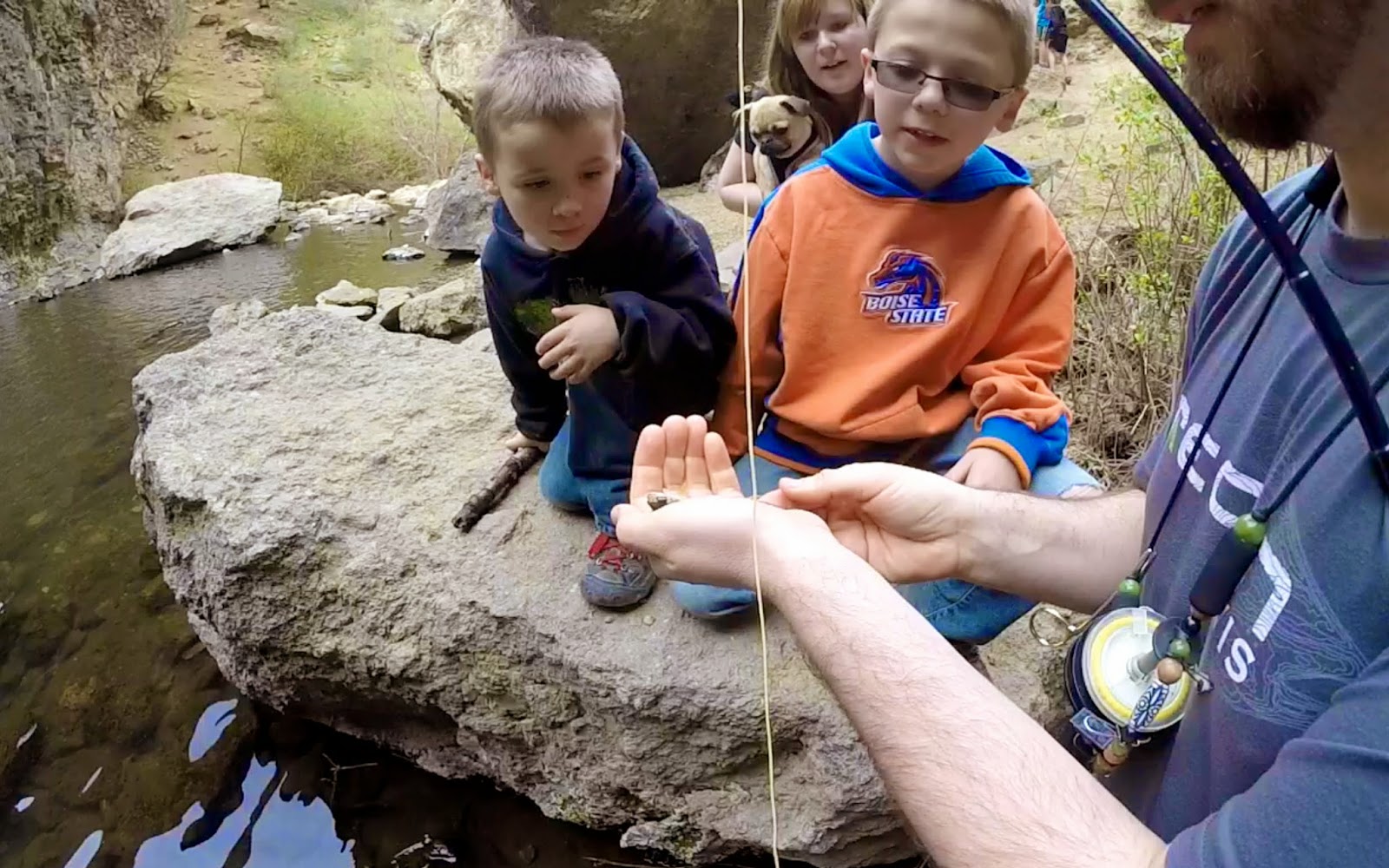 By now I had quite the crowd of people watching. The pico ant I had tied on was working its charm.  As soon as the ant hit the water, the little fish would charge at it with such ferocity, causing them to shoot out of the water and completely miss the fly. The little splashes and leaping fish put on quite a show. 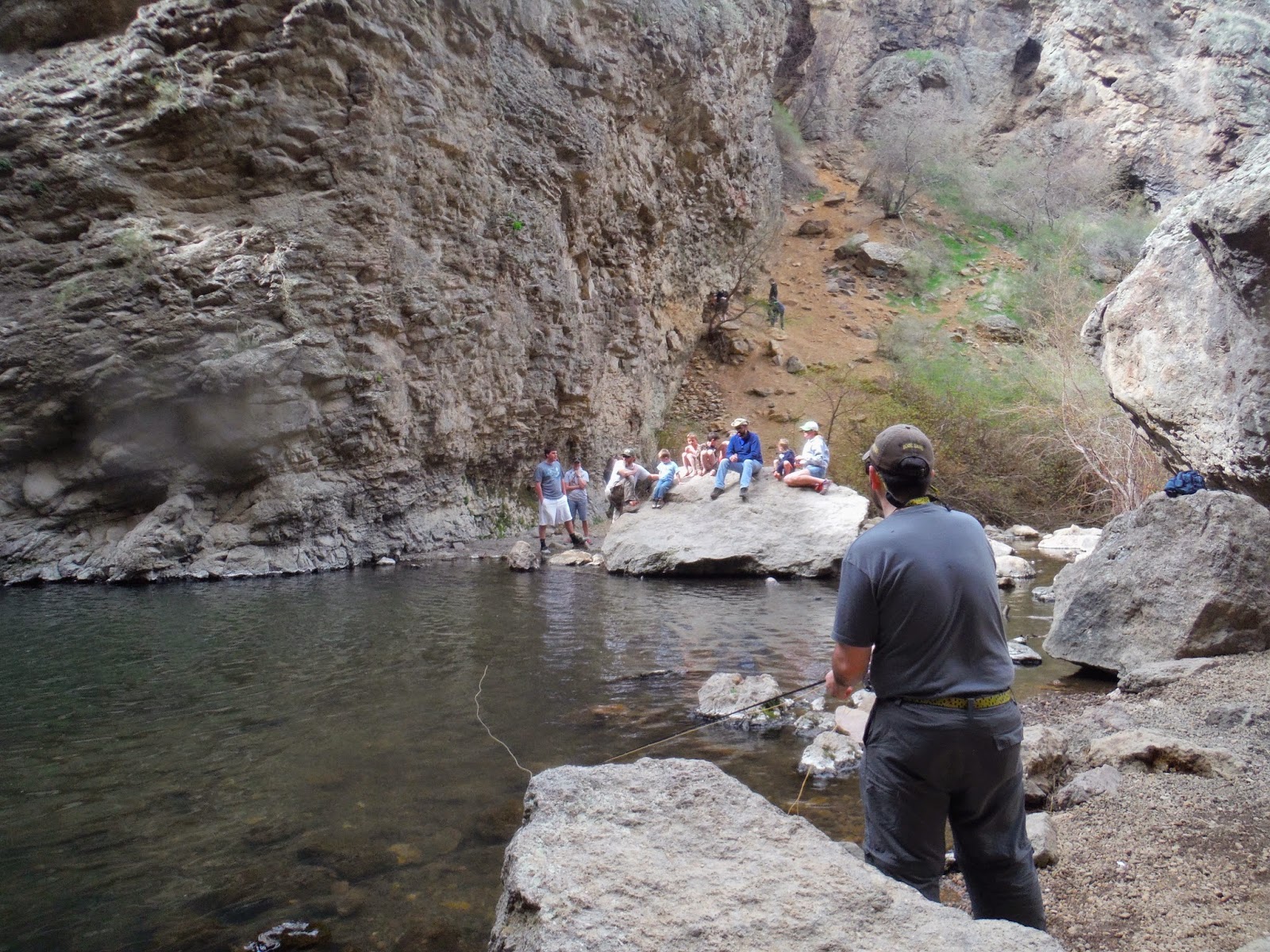 Both Nagger and Stephanie found a trail to continue their hike, while Jason stayed to watch me catch fish. 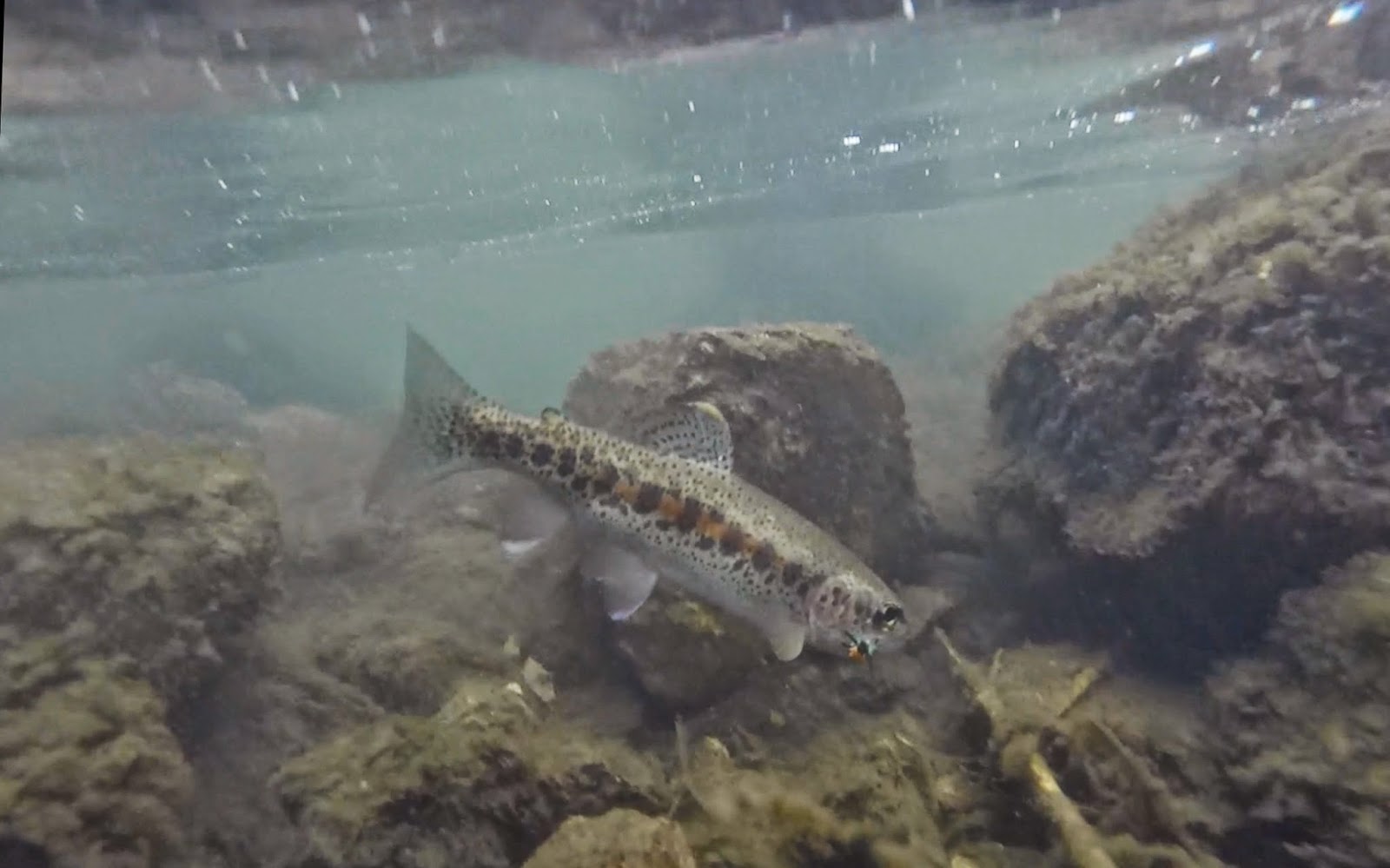 “Want to try catching one?” I asked Jason, who looked eager to throw the fly rod.
“Yeah!” he said, without hesitation. I handed him the fly rod and described how to make a cast.  With a quick explanation, Jason caught on and pitched out a fly to some hungry fish. 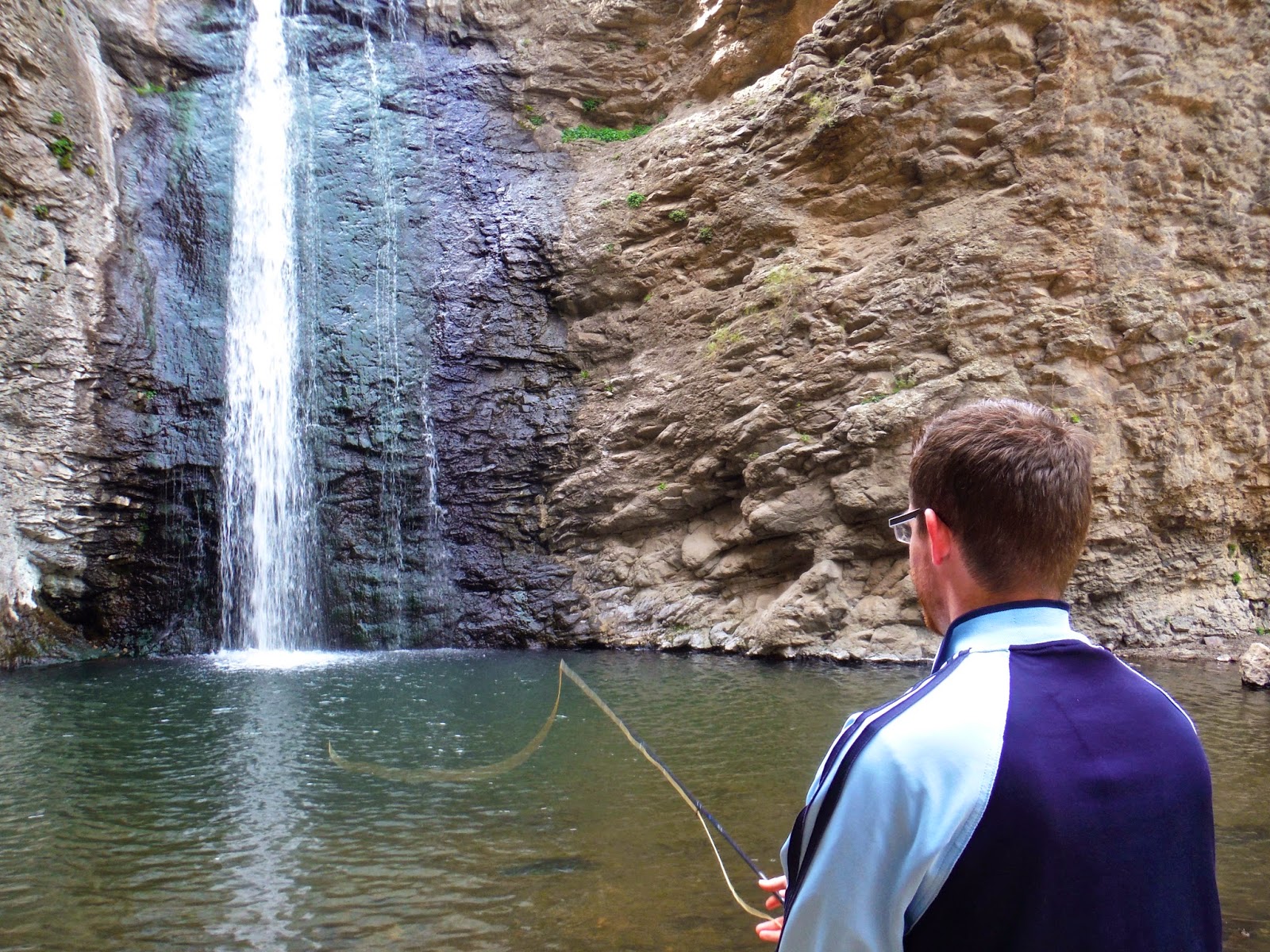 “Can you see your fly?” I asked.
“Yep.” Jason replied, just as a fish came up and ate it.
“There!” I said, but Jason was already on it, and set the hook to bring in his first fish on a fly rod. 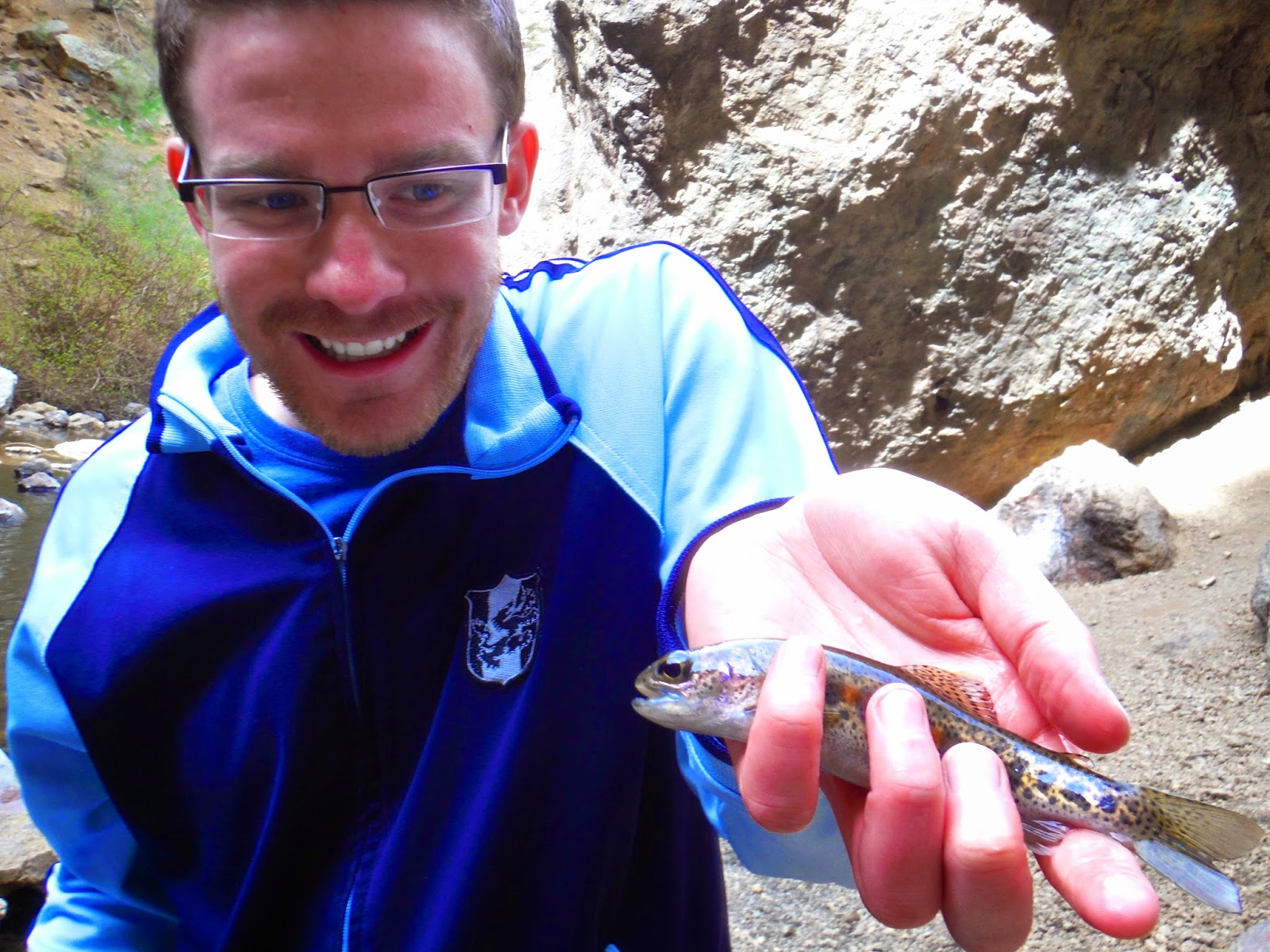 “I think that’s the big one of the day!” I said with a smile.
“Oh yeah, it’s a monster!” Jason said, sarcastically.  He dipped his hand in the water, and let his fish go.  The little fish sat there for a while, then shot off like a torpedo. 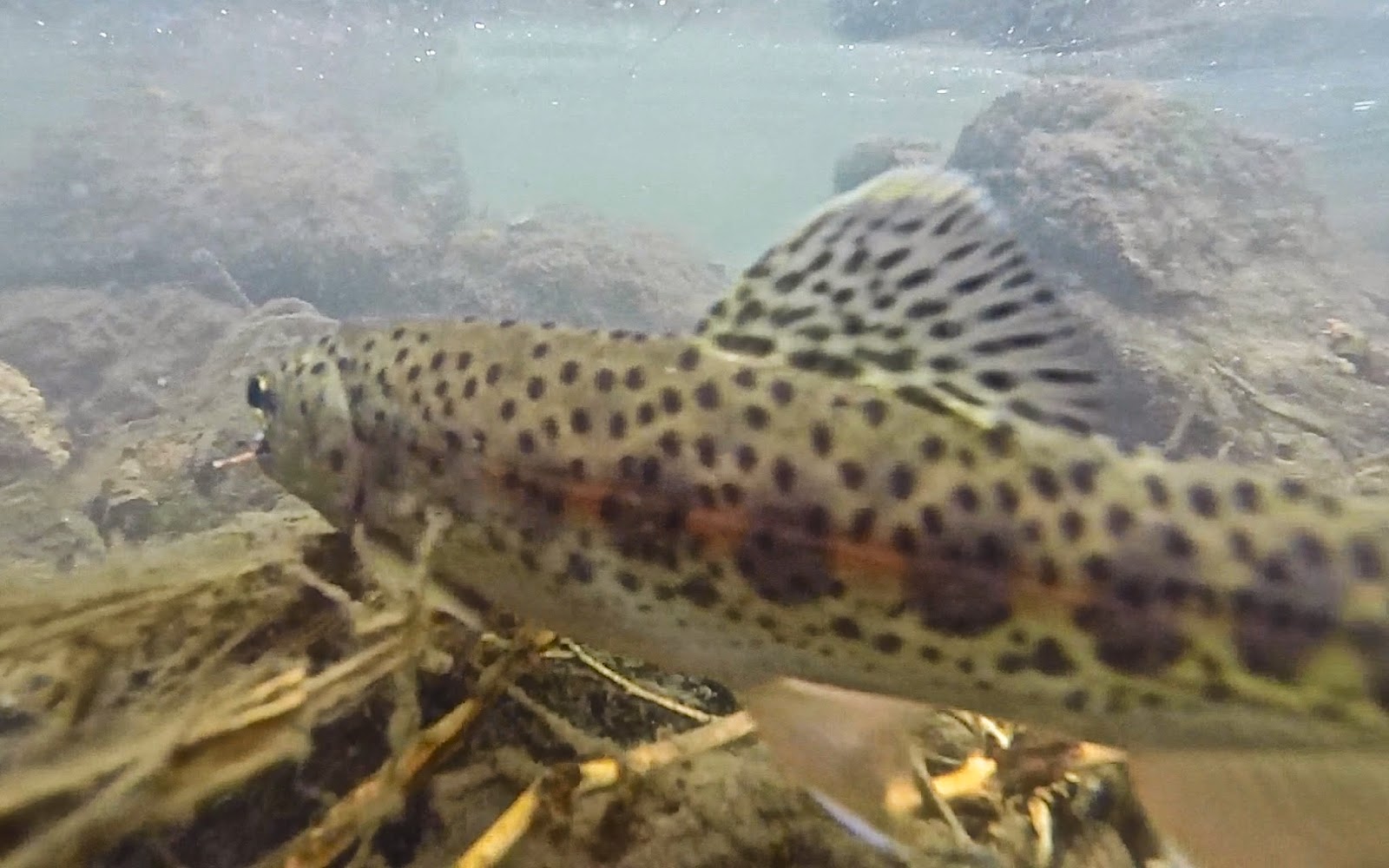 “We better go find Nick and Stephanie.” Jason suggested, after I hooked and released another fish.
“I agree… otherwise they will get back to the car and take off without us.” I said.
“I wish you were kidding.” Jason said, and we both went and found Nick and Stephanie at the summit of the hike, ending a great day of fishing.
This would be a great place to take my cousin Sam, because he has yet to catch a fish on a fly, I thought as we drove home from the hike. As soon as I got service, I sent a few texts to Sam. It was confirmed, Sam could go and my Uncle Jim was coming too… Looks like I’ll be here tomorrow!