Sam was waiting with his gear ready to go when I pulled into the driveway to pick him up.  I was happy to hear that my uncle, Jim Englar, was joining us on our hike for redband trout; I have been wanting to fish with my uncle for years, and was happy that the day was finally here.  From their house the drive to Jump Creek Canyon was short, and the hike to the falls was even shorter. 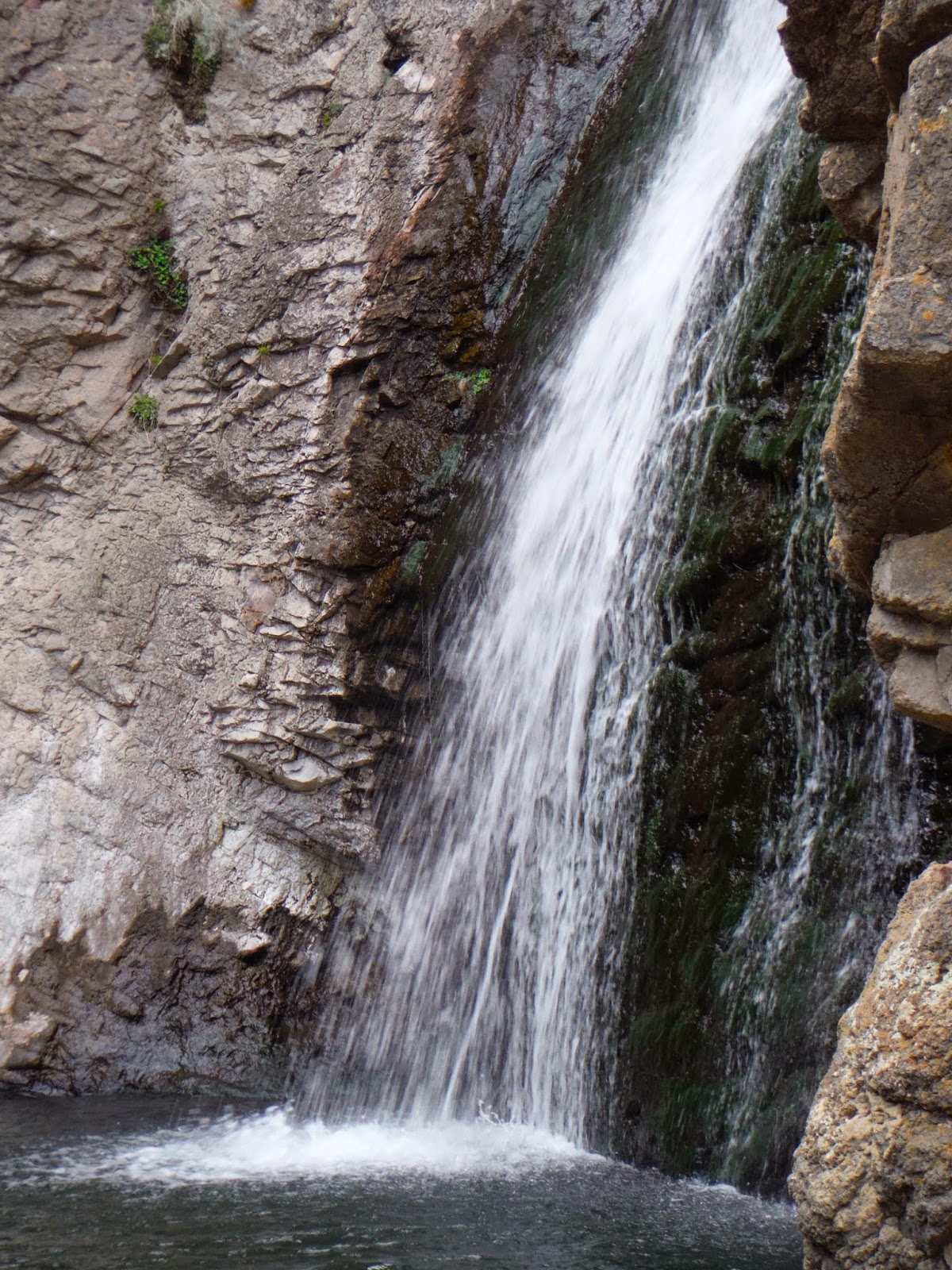 “Geez, it’s a good thing I have these sunglasses on with that cork being so bright!” I said, as my uncle pulled his new fly rod out of its case.
Uncle Jim started laughing, then said, “Yeah, it’s a shame. I need to get out more.”
“Man, it still has that new cork smell and everything.” I said before we started fishing. 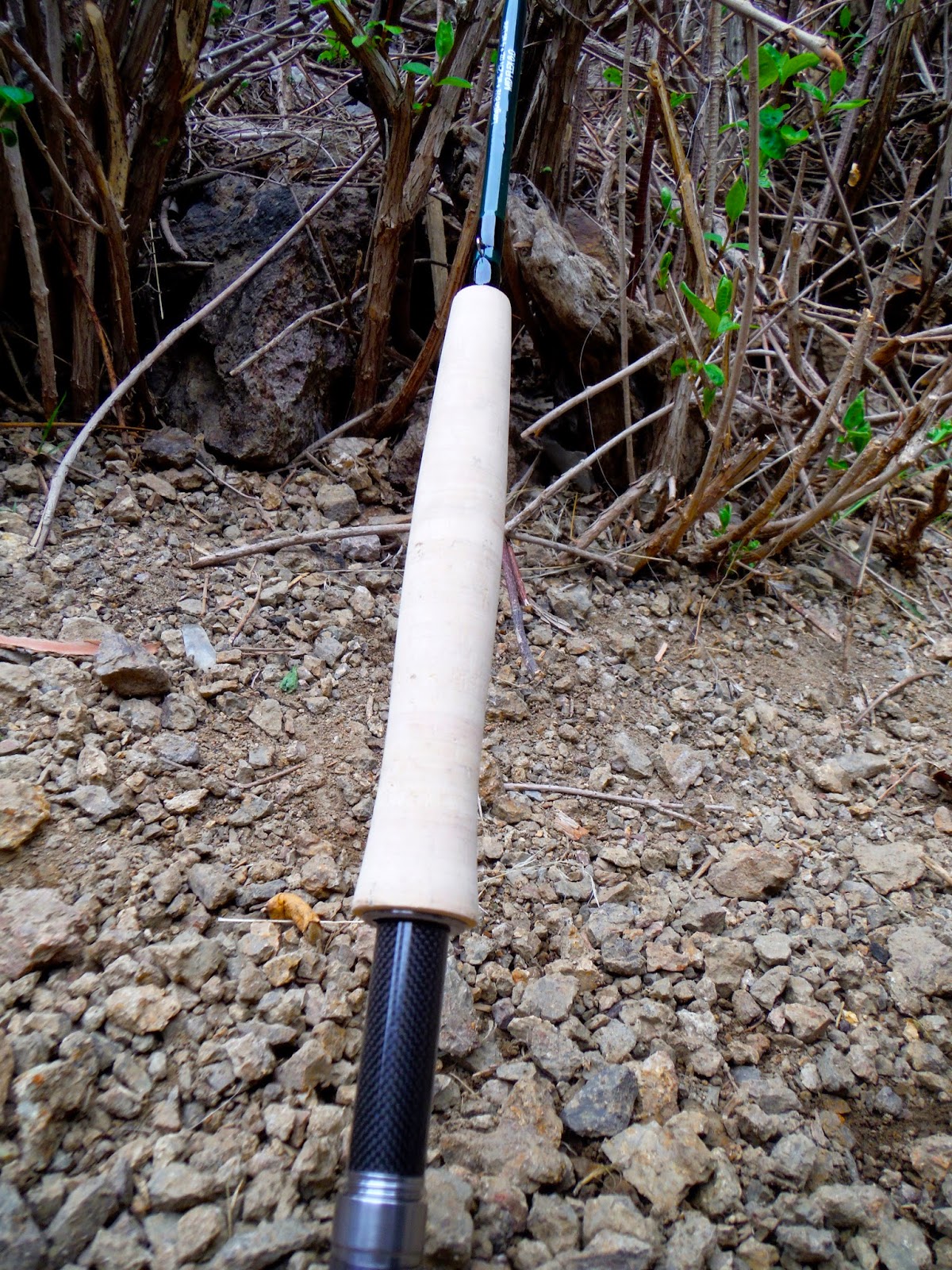 Uncle Jim hooked into the first fish almost immediately, and was not shy about making it known. I was standing by Sam, who was remembering how to perform a roll cast. 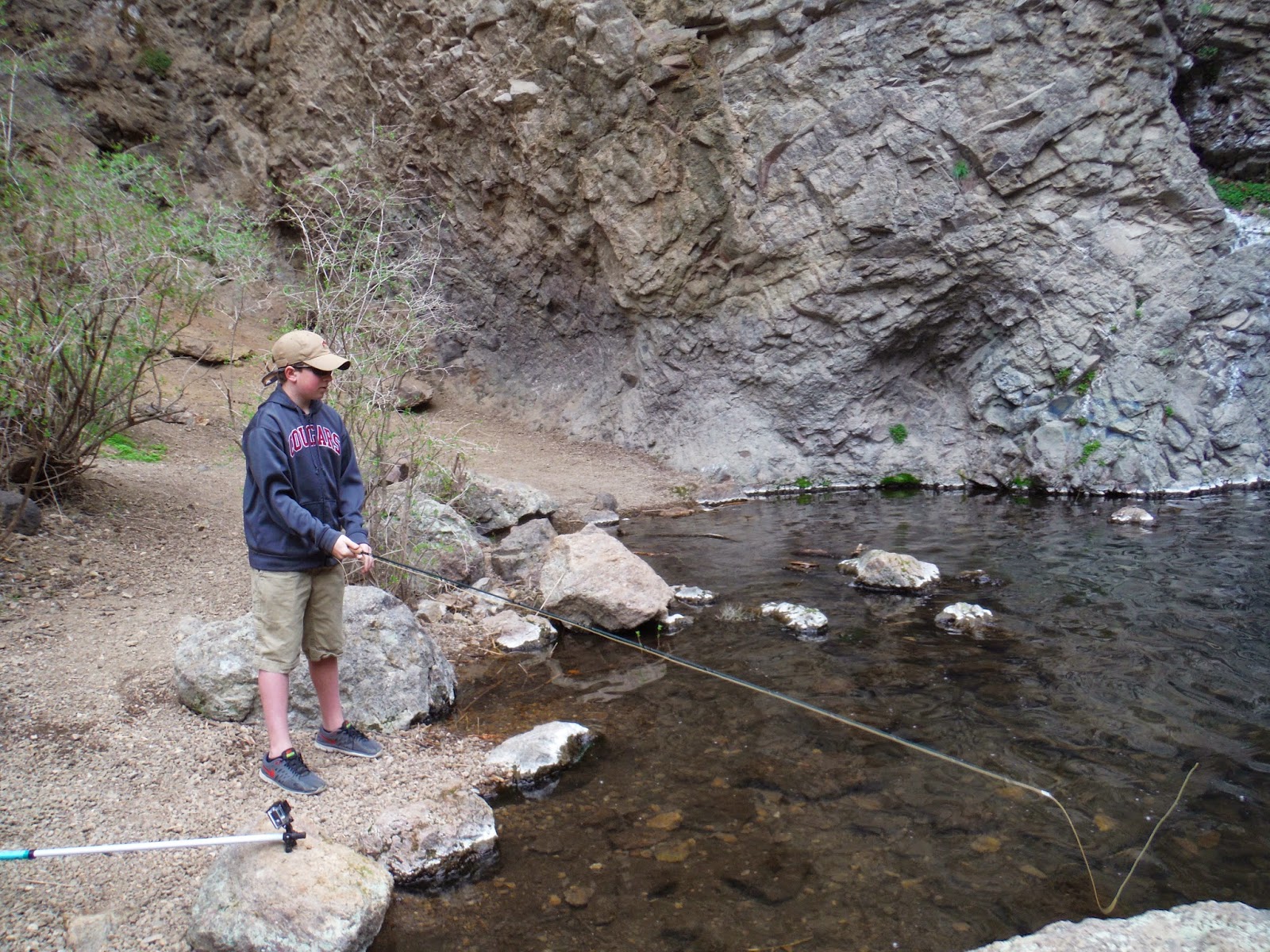 Sam picked up the cast fast, and was presenting his fly in spots that look fishy.  Though his casts were reaching a safe distance to catch fish, nothing was taking… or was it? After a closer observation, I could see Sam’s line twitching ever so slightly, but I knew that meant fish were taking his nymph as he retrieved it. 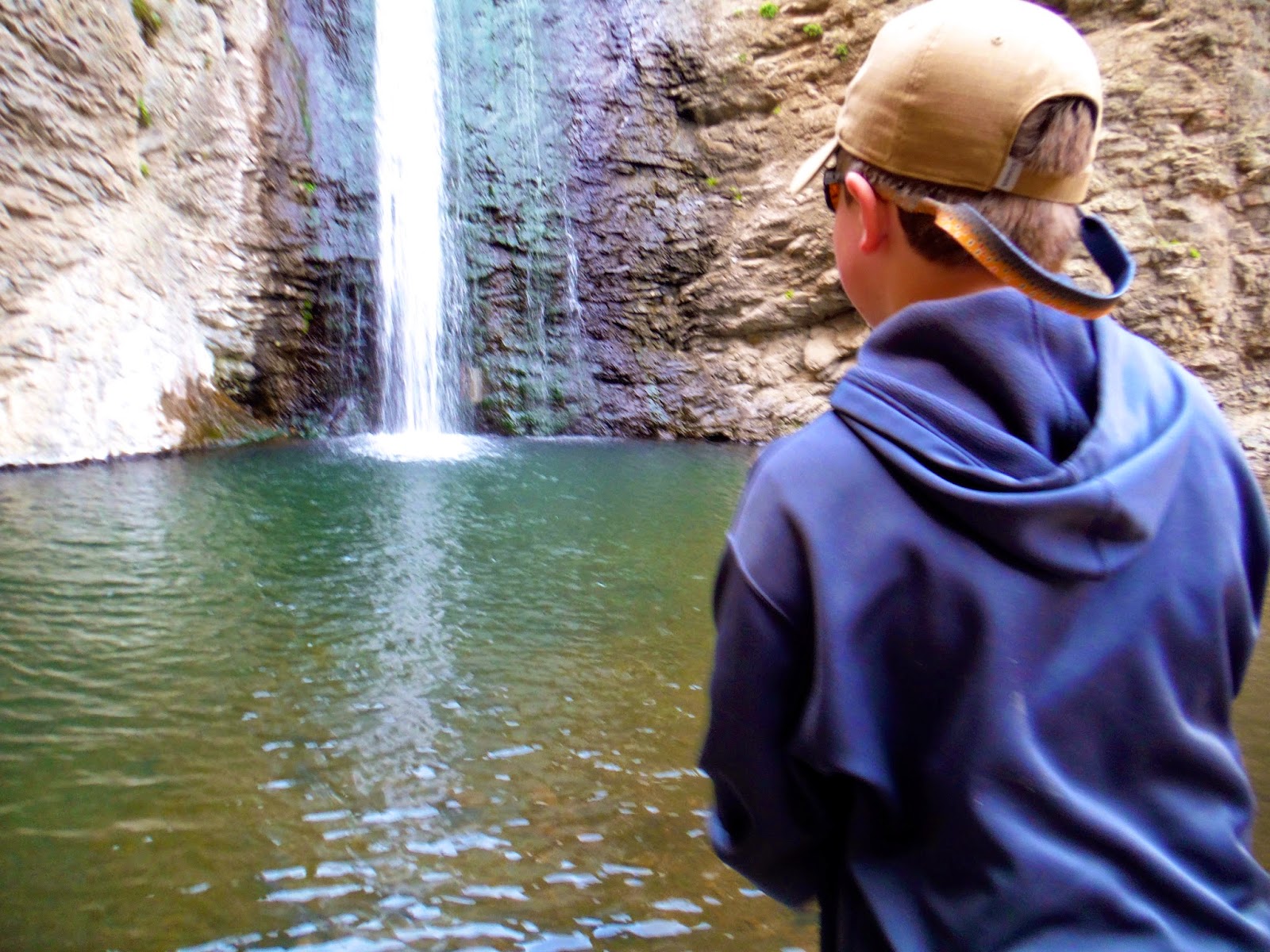 “Sam, I can see you are getting bites.” I said, as Sam looked up at me. “You need to keep your rod tip close to the water, so that there is little to no slack in your line as you retrieve your fly.”
“Okay.” Sam said, following my instruction.  His line twitch again, but this time Sam was on it.
“Oh, I felt that.” Sam said, raising his rod tip to see the hook, but nothing was on.
“Flick it back out, that fish is still hungry.” I said quickly, but Sam didn’t need to be told; his line was already in motion to put his fly right where it needed to be.  Before I saw his line twitch, Sam set the hook on a fish.
“There you go!” I yelled, as Sam brought in his first fish on a fly rod. 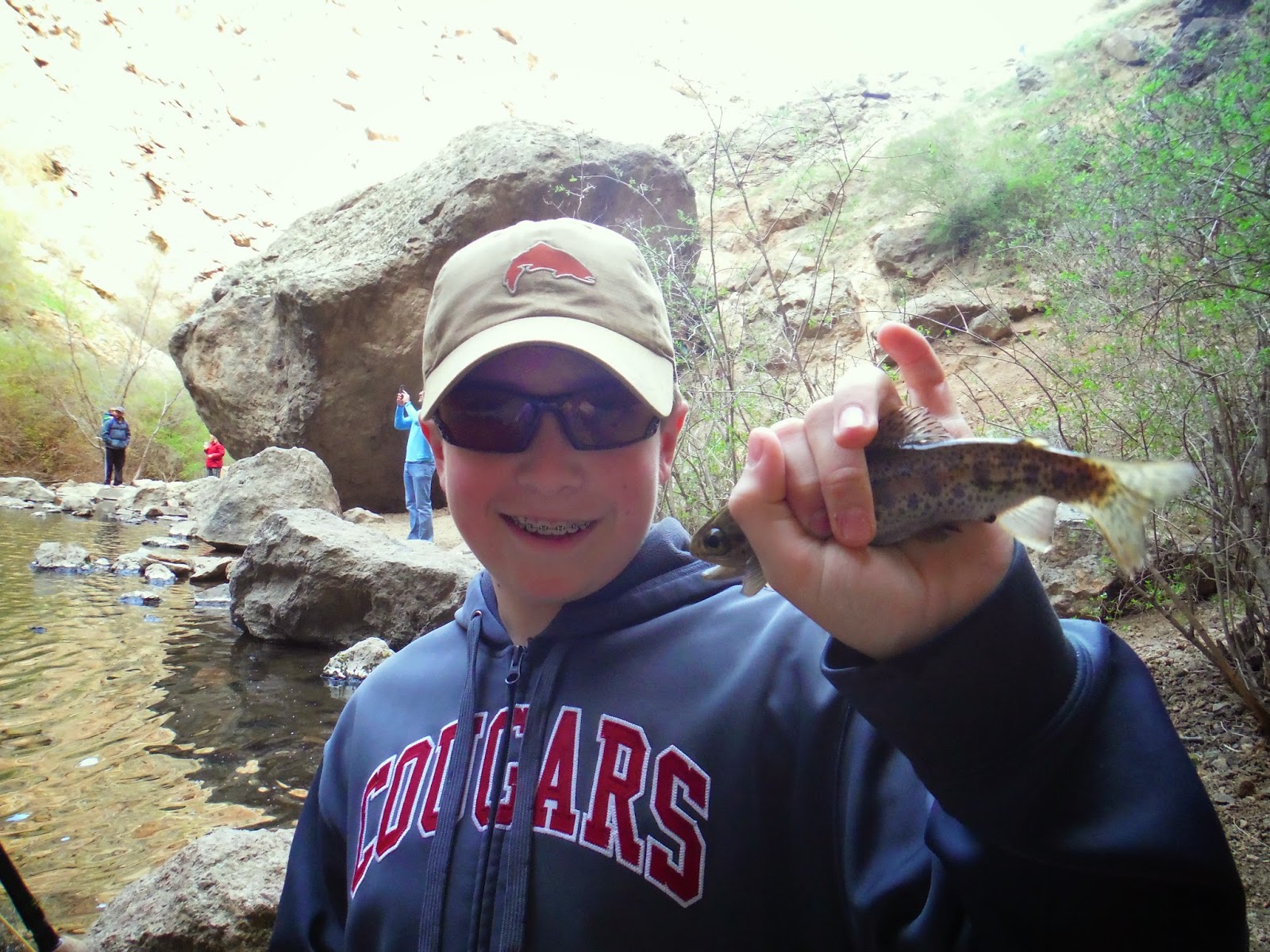 I quickly explained to Sam the difference between a regular rainbow trout and a redband rainbow trout, as he held it in his hand.
The brilliant colors and patterns of the redband are unmistakable.  Definitely a fish you need to catch and see for yourself.
“Cool fish, huh?” I asked Sam.
“Yeah.” He said back, as he released his fish. 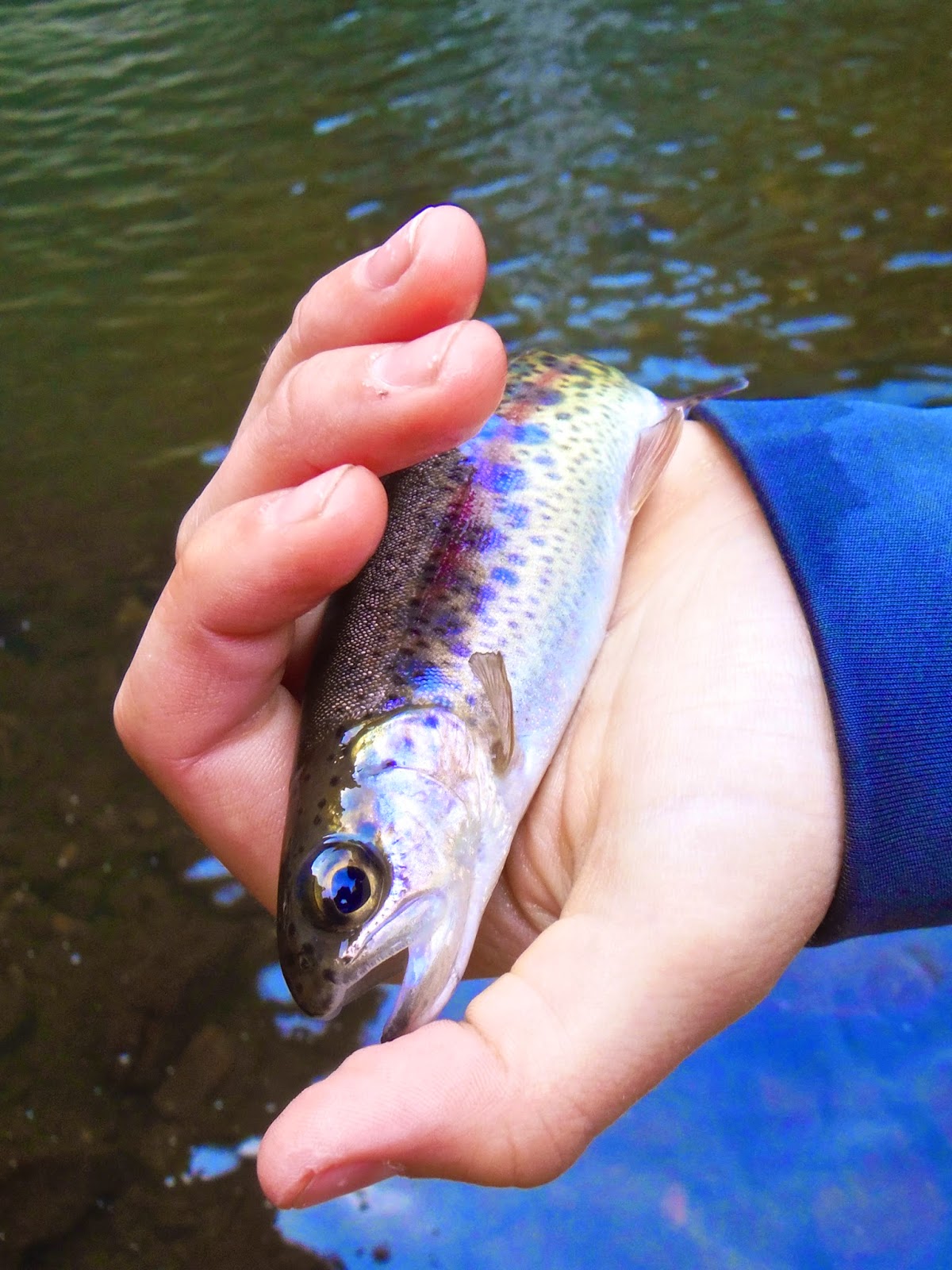 After Sam had caught a number of fish, I began to fish with my 2 wt. Superfine touch fly rod: a dream rod for this situation. The little 2 wt. fly rod is so light that even the little two-inch fish were putting a decent bend in the rod.  Uncle Jim had found a nice hole on the other end of the pool, and was producing fish after fish. 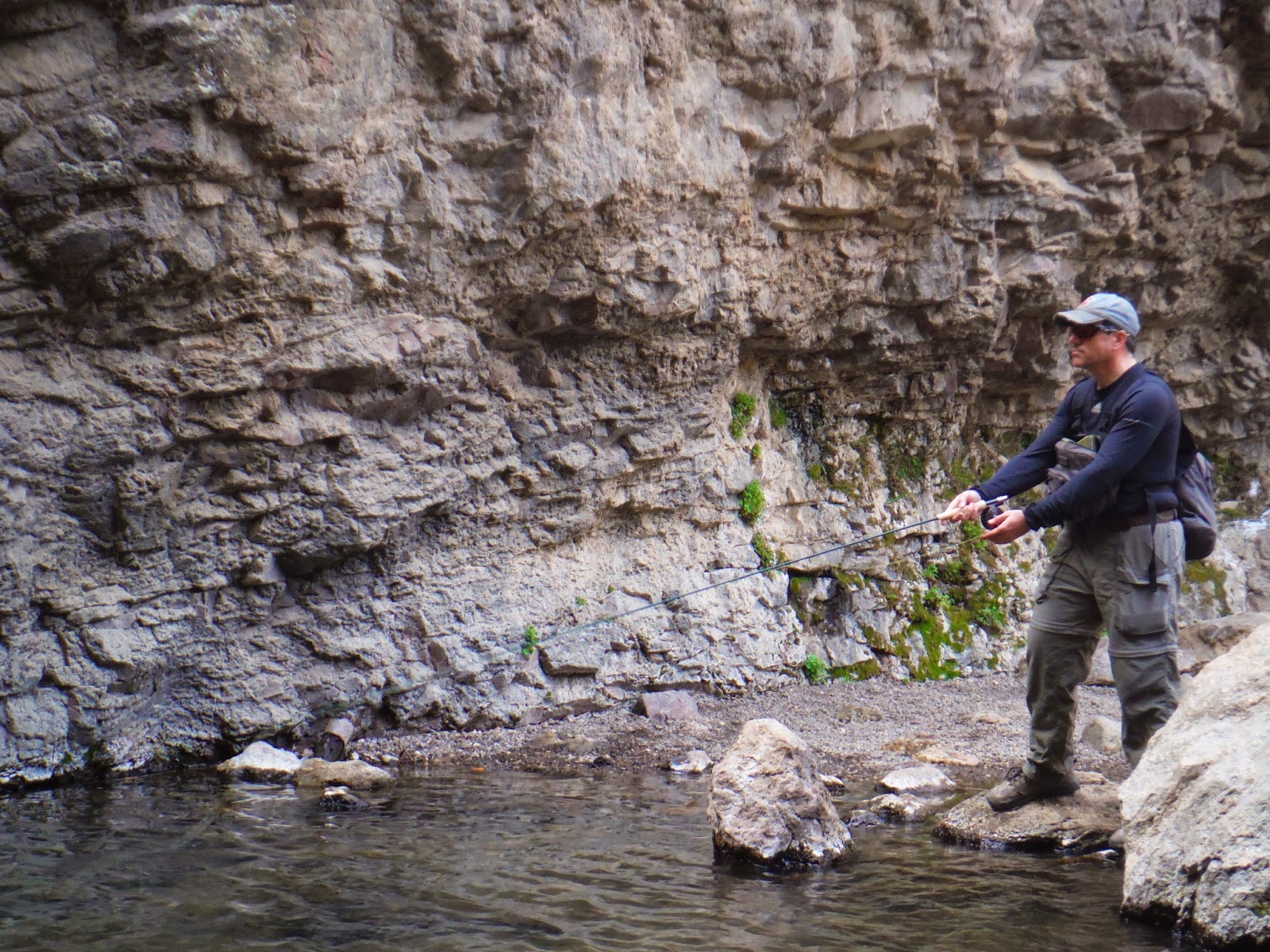 “There’s a nice one.” Uncle Jim said, as he brought in one of the bigger fish of the day.
“Hey, that is a nice one.” I said, then dropped my fly rod, and ran over to get a picture of him and his fish. 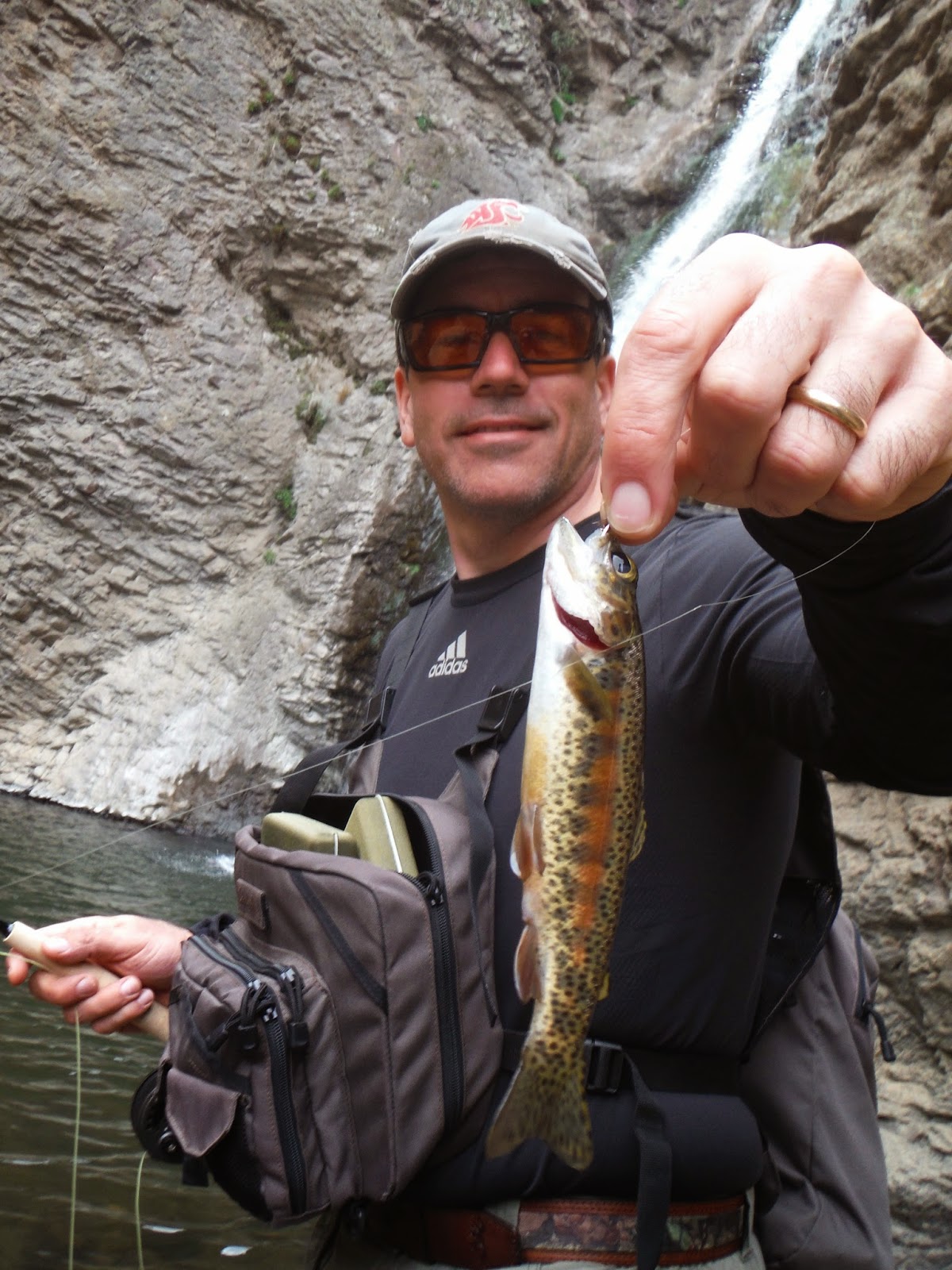 “Would you guys be interested in checking out the river above the falls?” I asked after fishing below the falls for a while.
“We would be up for that.” Uncle Jim said, before we put the fly rods away and headed up the steep hill.  The path looked like it had ended, until a seasoned hiker of Jump Creek Canyon showed us that it had not.
“See that small crack…” The gentleman said, pointing up the steep rock, “… that’s the path that leads above the falls.”
“Let’s try it.” Uncle Jim said, confident we could make the climb. The nice gentleman led the way as Sam, Uncle Jim, and I followed behind. 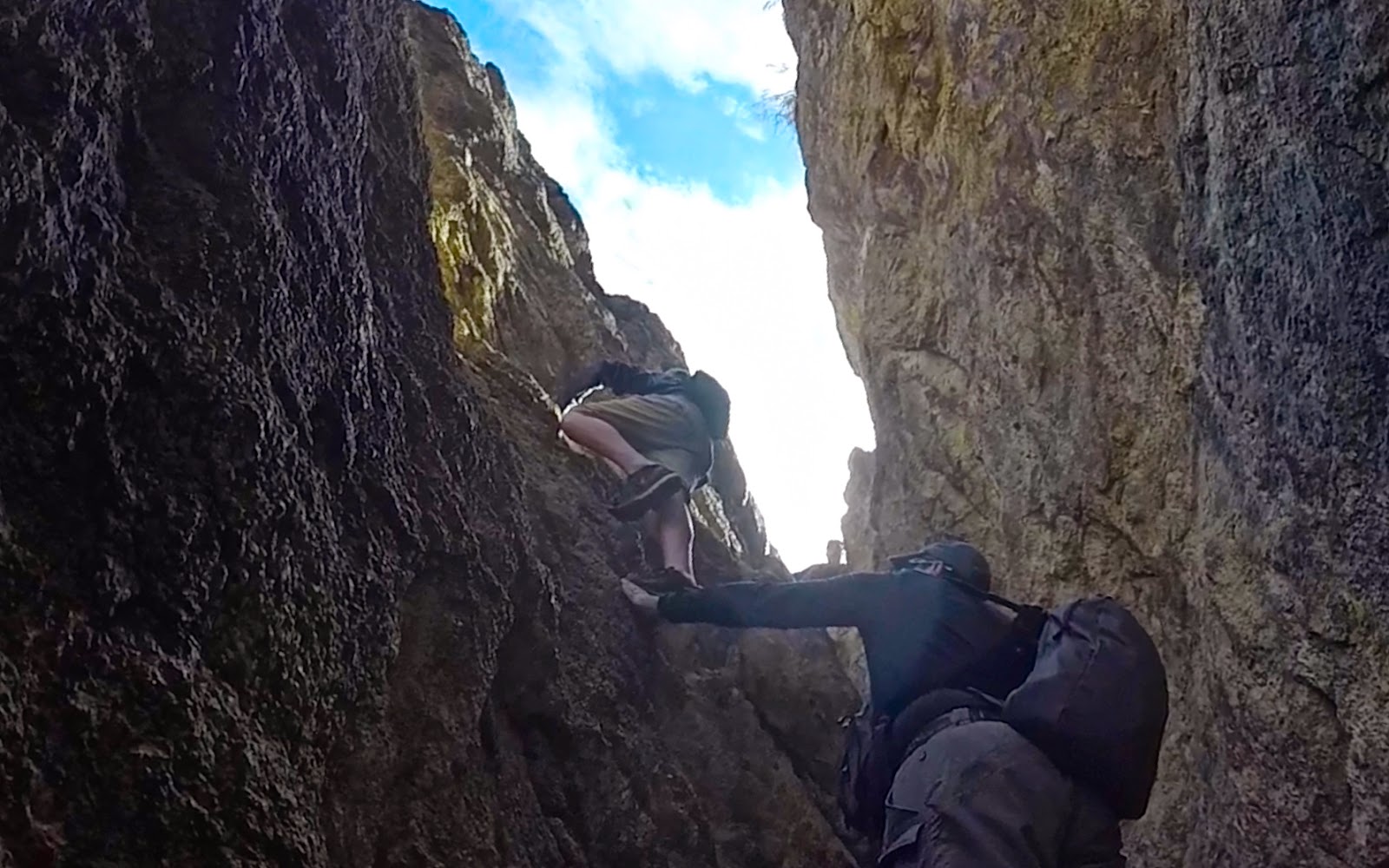 Sam had reached the crux of the climb, and it looked a bit intimidating.  After a bit of hanging there, we decided we would need to be more prepared to make that climb. Instead, we found a spot downstream from the falls that had a lot of dry fly activity.  I tied on a pico ant for Sam and he stood on the rock, casting to hungry fish. 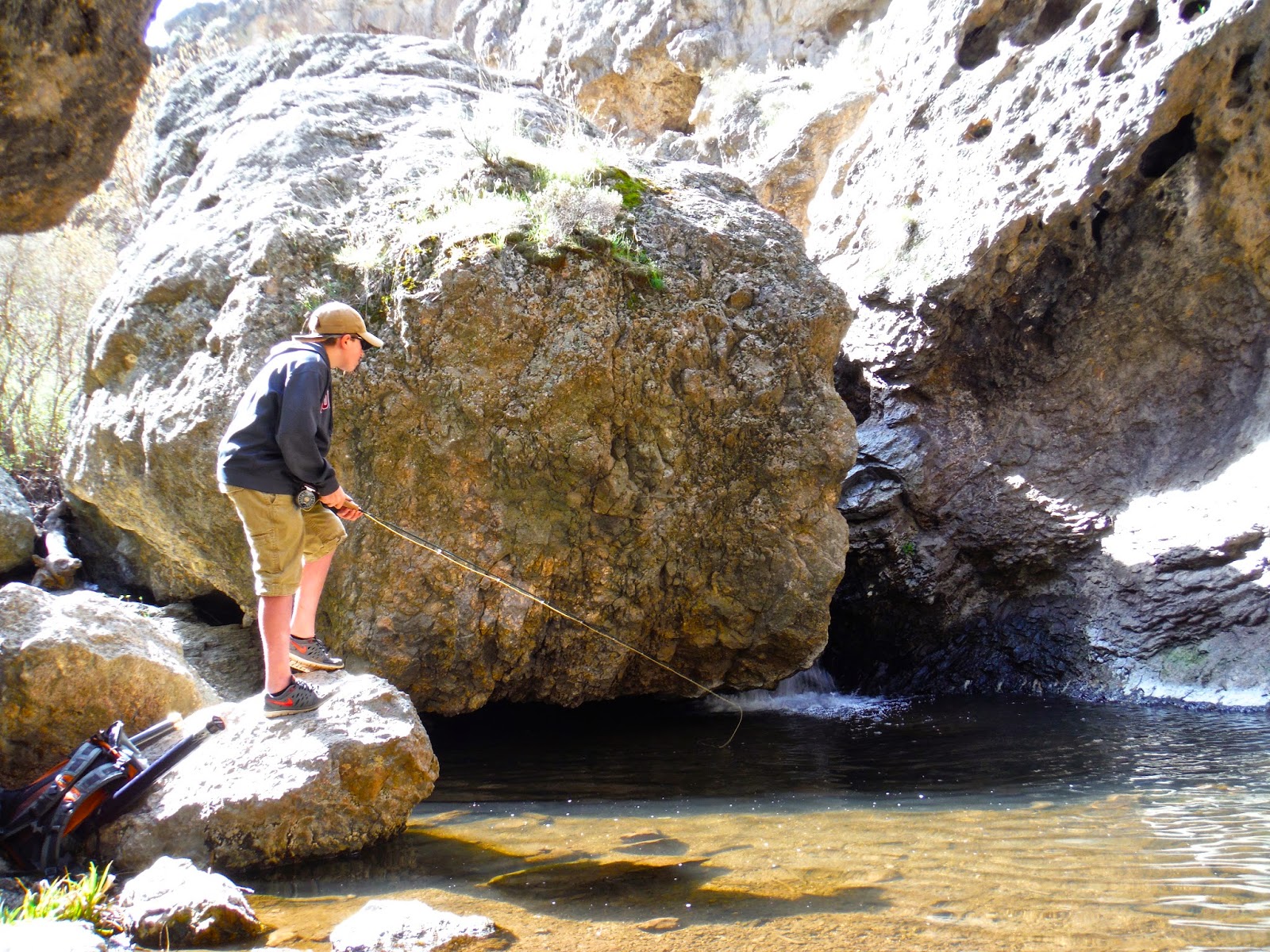 Sam had found the honey hole, ripping fish out left and right. Every fish that took his fly was celebrated with laughter and a “that-a-boy” from his dad, as Sam really got the hang of catching fish on the fly rod. 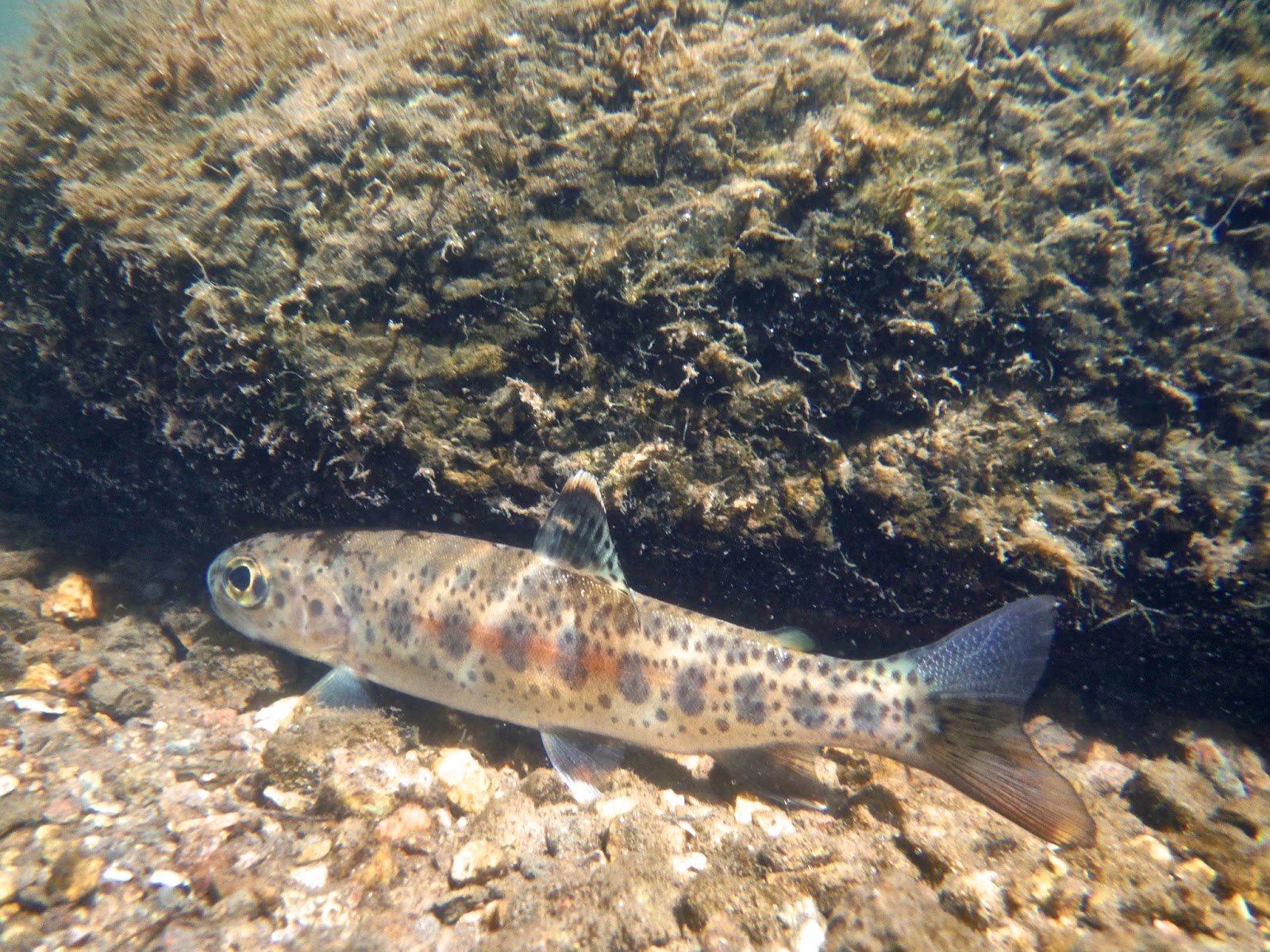 Unable to take it anymore, Uncle Jim tied on a little may fly and started casting.  His fly hit the water and a small fish came and ate it.  Like a catapult, Uncle Jim set the hook, sending the little fish flying high and behind him… right into the rock wall.
“Geez, could you set the hook a little harder?” I laughed, as I grabbed the little stunned fish. 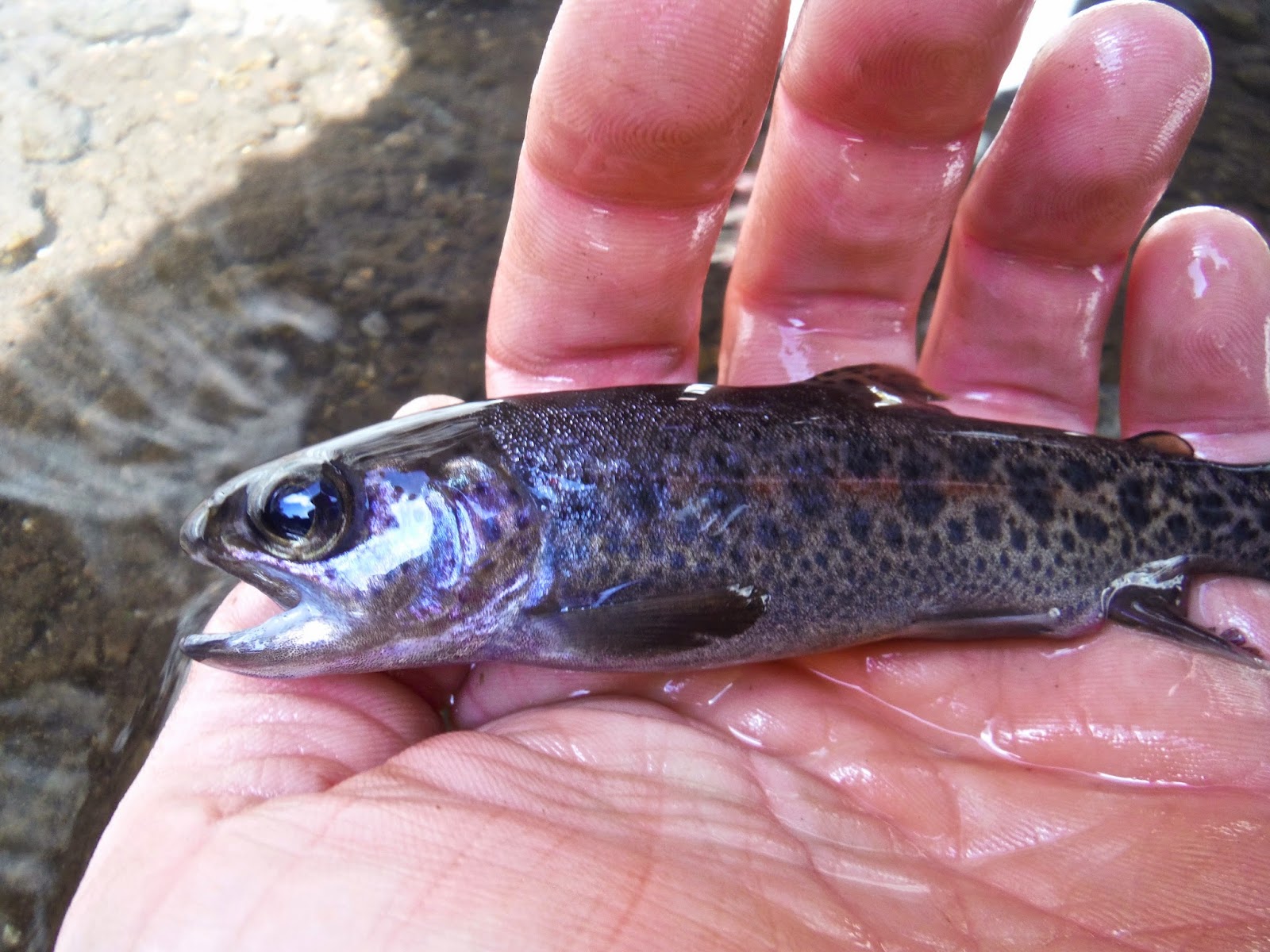 “Try holding it in the current.” Uncle Jim suggested, as I did my best to revive it. The small fish didn’t seem to be doing well, but after a little bit of TLC it started swimming, then turned and darted away.

A large rock slide that happened hundreds of years ago covers up a portion of the creek that deprives it from light, giving the feeling like you are fishing a small cave. 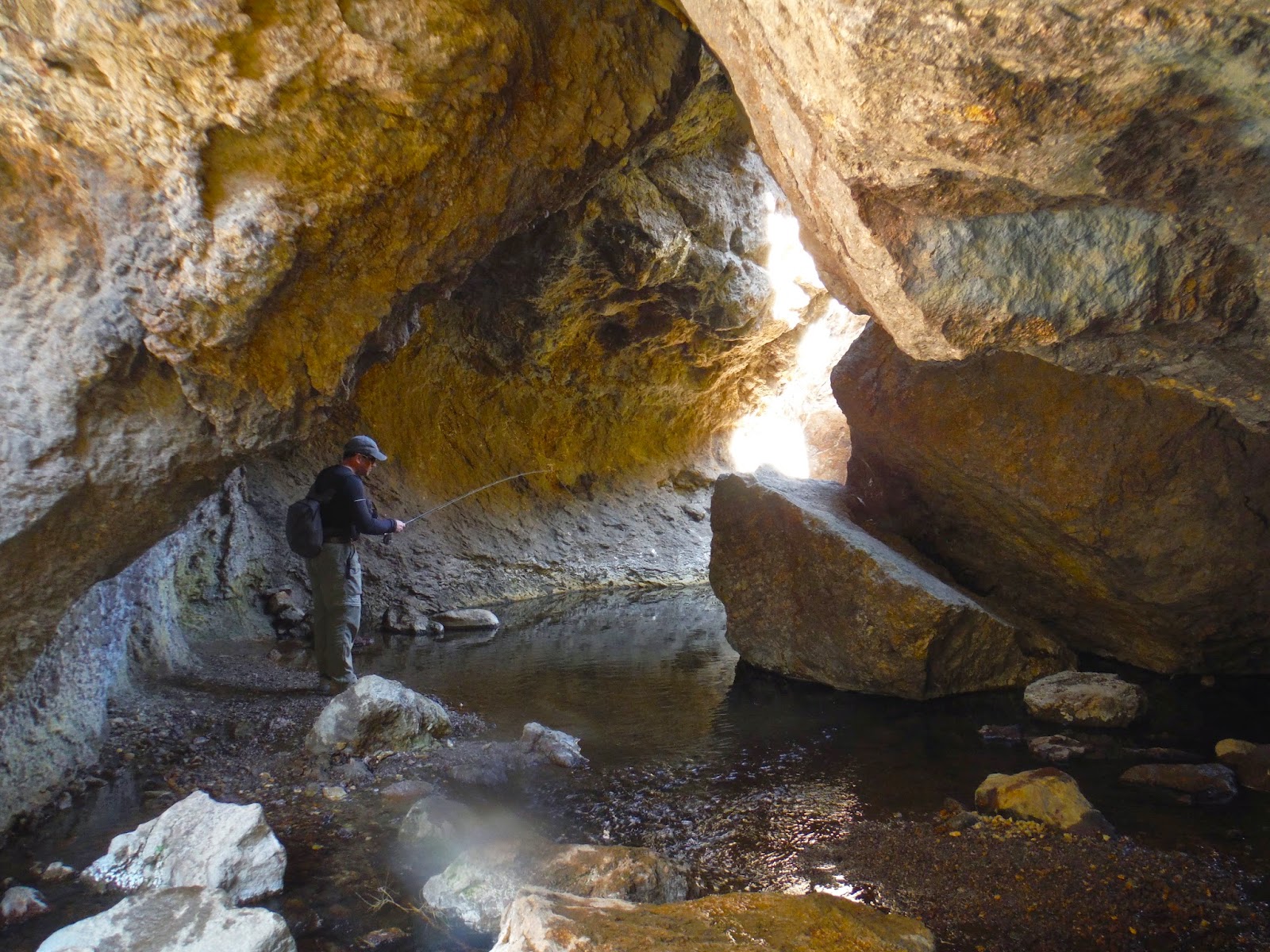 The lack of direct sunlight did not hinder the fishes’ appetite, Uncle Jim discovered, as he proceeded to catch the fish that were taking refuge under a large rock.  A large smile from Uncle Jim was what every fish he caught saw.
“If you can’t have a good time catching these little fish, then you just don’t get it.” I said.
“There is something neat about being out here and enjoying nature… and catching these fish is just fun!” Uncle Jim said, as he admired another nice redband. 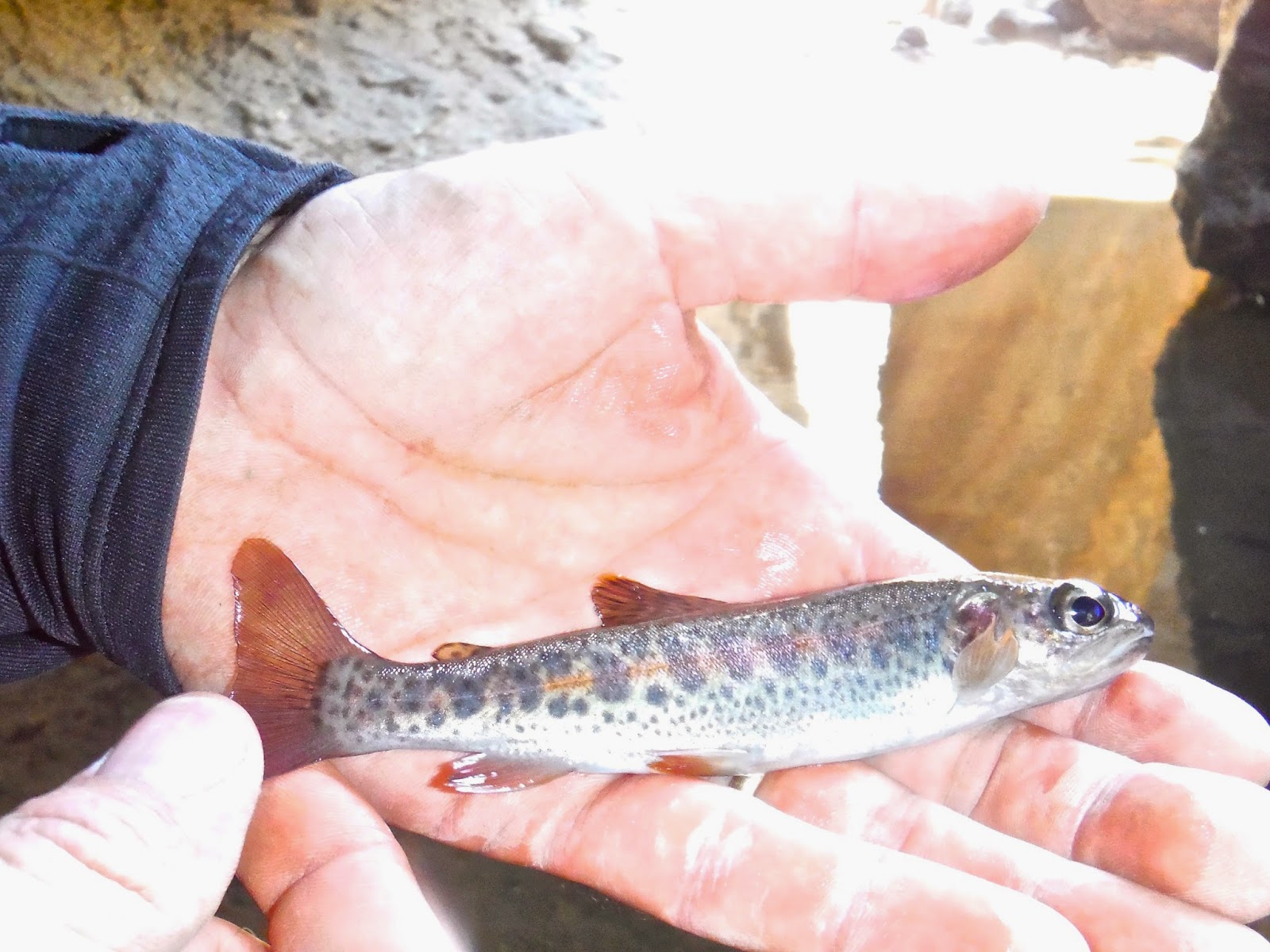 We had fished this creek hard, and after a while the fish were not so willing to take our flies.
“I think you caught all the fish here, Sam!” I said, after a few unsuccessful attempts.
“Yeah, they don’t seem as hungry.” He replied.
“It’s not that.  You just educated them.” I said smiling, as Sam smiled back. 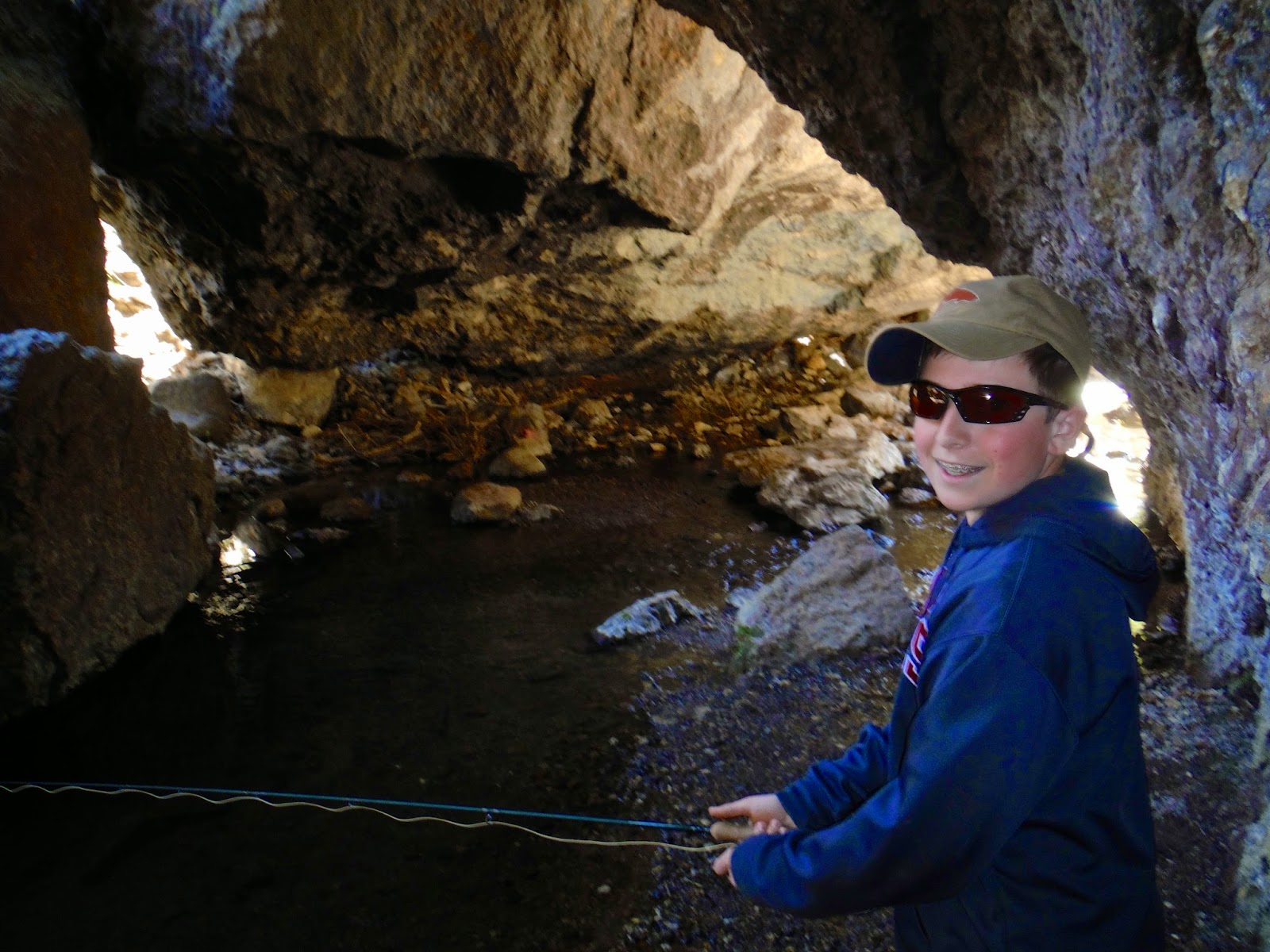 A good portion of the day had flown by fast, and it was already time to get going.
“Thanks for taking us out, Erik.” Uncle Jim said, as we packed up our gear.
“Absolutely. I have been wanting to get you out fishing for a long time. And I definitely wanted to get Sam into his first fish on a fly.” I replied.
“That was pretty cool.” Sam said.
“Well, we will have to get out again soon before my gear gets too dusty.” Uncle Jim said.
“Hopefully got some cool video of Sam catching fish with the GoPro.” I said, looking back at Sam.
“I want to see that.” Sam said, excitedly.
“I’ll get it edited fast, and put it on YouTube!” I told Sam, as we drove away from a fun day at Jump Creek.

4 thoughts on “Sam’s First Fish on a Fly”